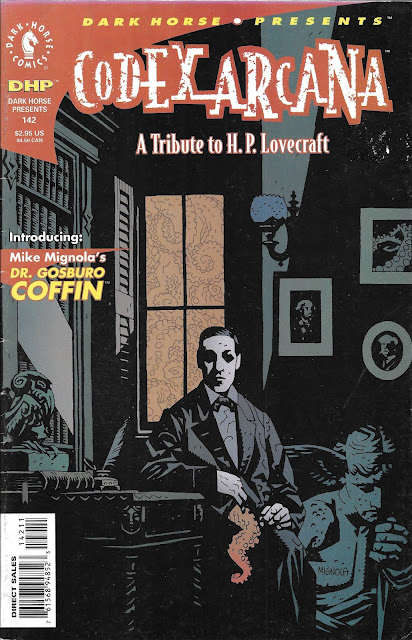 A worthy trio of HPL tales

Dark Horse Presents stands for the kind of quality anthology that I can get behind. The title ran continuously from the Dark Horse imprint’s founding way back in 1986 all the way through the year 2000. But like any good title, you can’t keep it down and it has experienced not one, not two, but THREE revivals since then. The latest began in 2014 and is still ongoing.

This little three-for comes to us before the first series ends. Back in 1999 DHP put out issue 142, a gem that features a Lovecraftian theme to all three of its weird and wonderful tales. Every one of these is great and features some astonishingly good talent too. Get ready for some thrills as we dive right in.

For my money, you can’t go wrong with a Mike Mignola tale that evokes the mythos. He’s had his “hand” in the weird horror fiction since he developed Hellboy, a property that has spun out more original, inventive horror concepts that I can shake a stick at. And with this issue, he’s about to add one more: Dr. Gosburo Coffin.

Coffin doesn’t appear much nor get his own set of stories, but he does okay in this introductory tale. In it he and his man-servant Albert have come to Whistler, Massachusetts, to uncover the mystery of John Leslie Horn, a man obsessed… 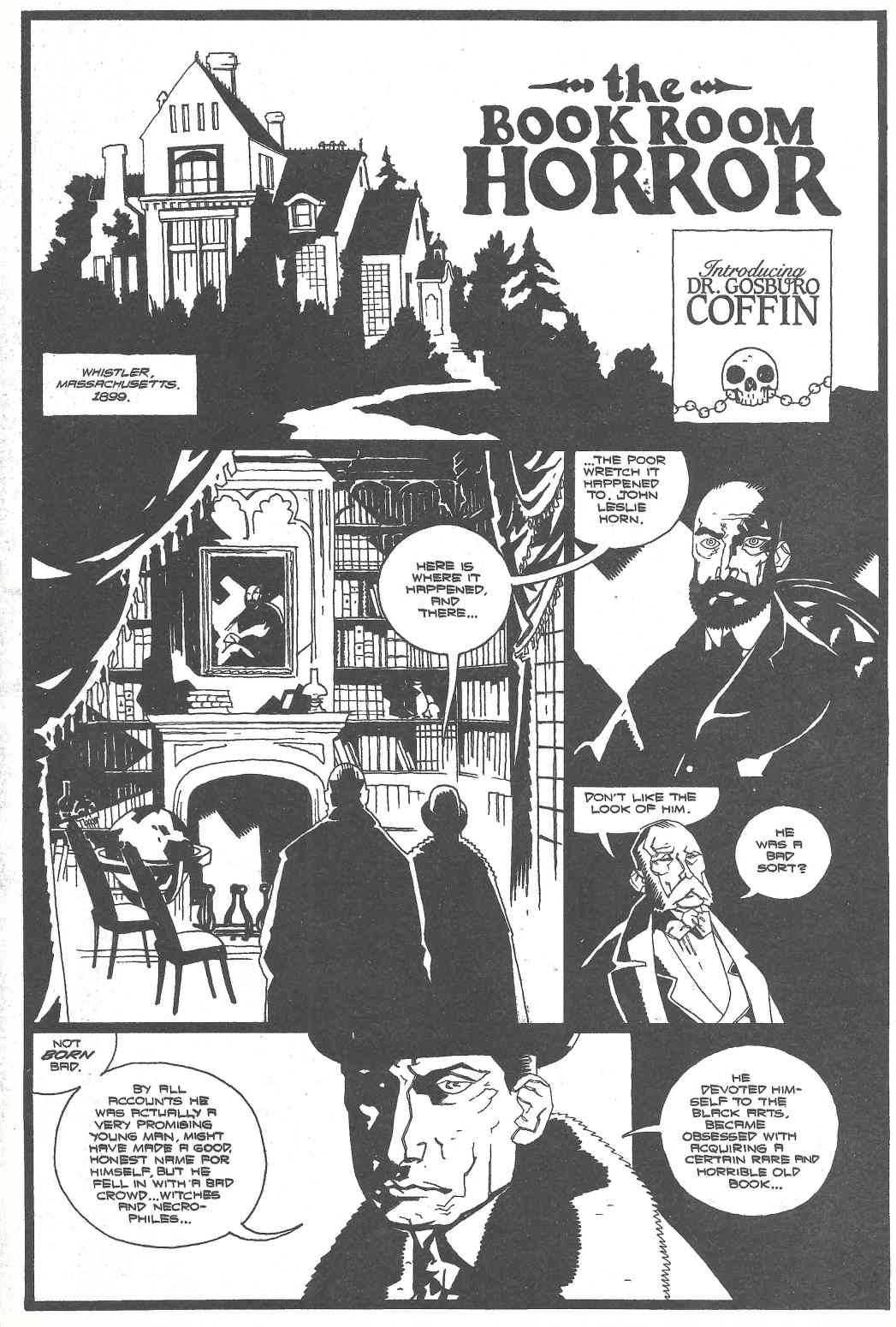 Obsessed by obtaining a certain mystical book, which of course he does obtain and it proves to be his undoing. After carving strange symbols on his skin he bursts into flames at the doorway of a church. However, his sprit still haunts the manor home where he read the dark tome. 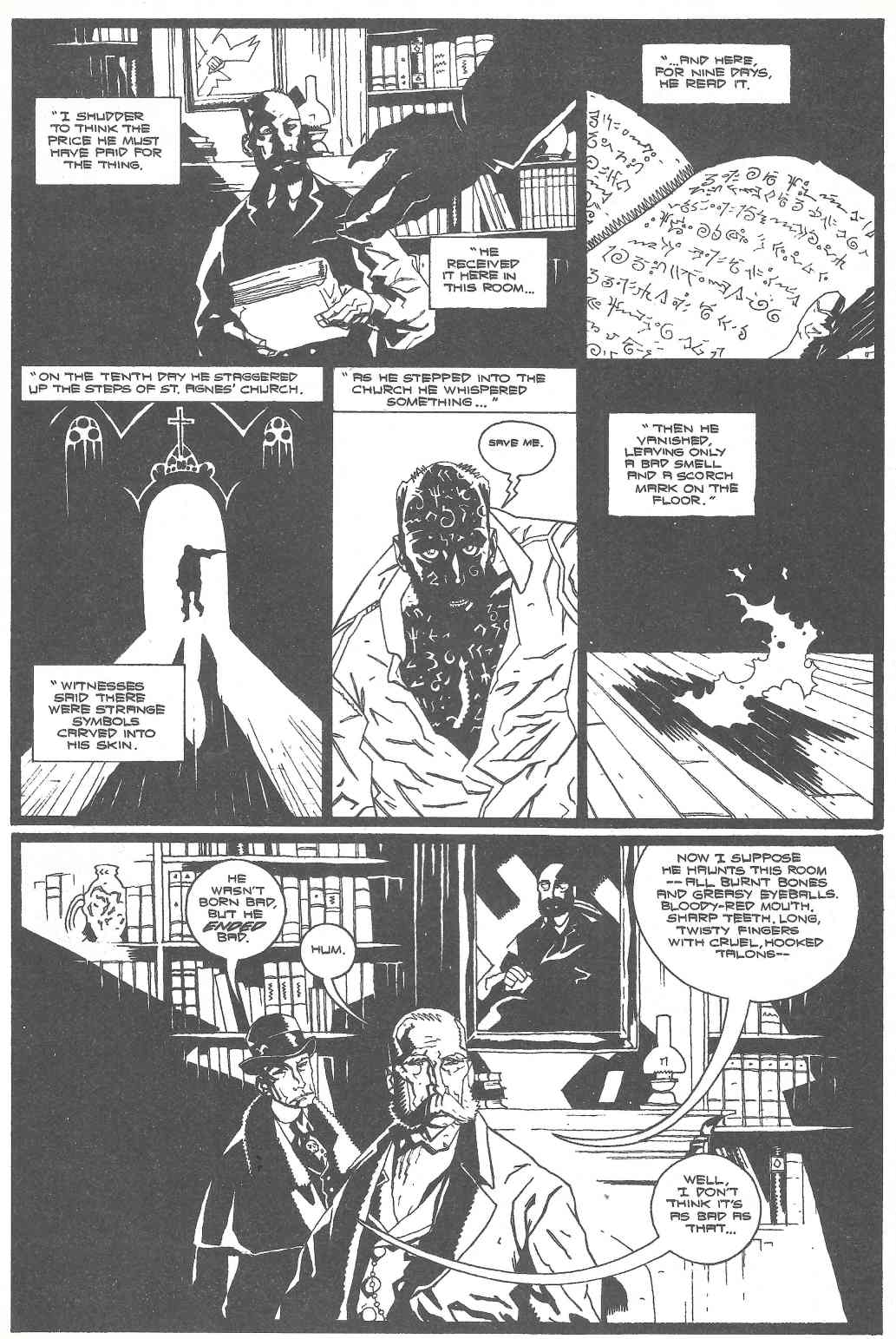 Albert and Gosburo settle in to see a ghost show, as the annual haunting is about to begin. Albert gets a little too comfortable and nods off before the show begins. Which leaves Coffin to confront… 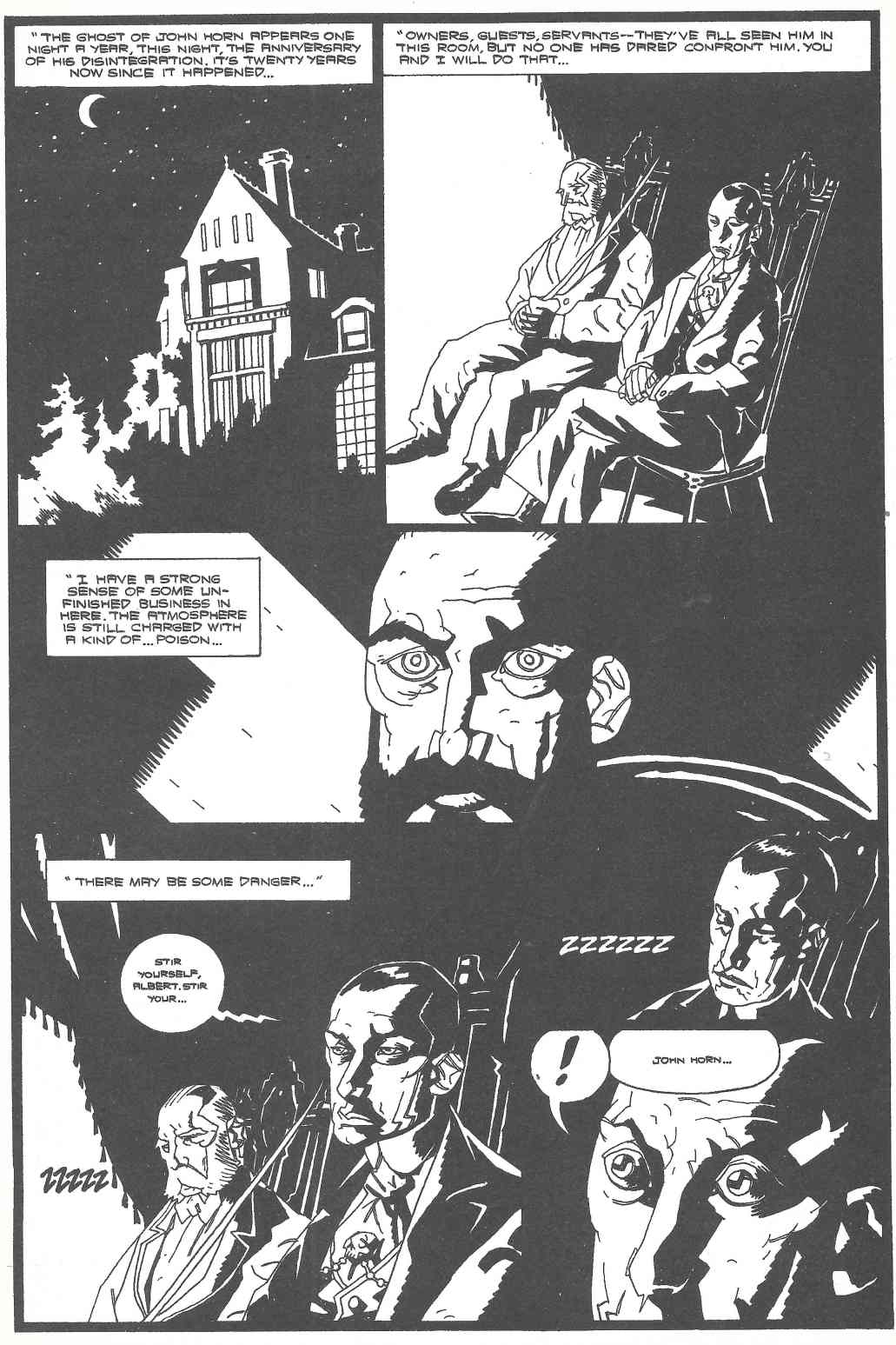 … The specter of Horn. However, it may not be Horn who is banished this night, as the ghost forces Coffin to read the very tome that drove his living self mad. 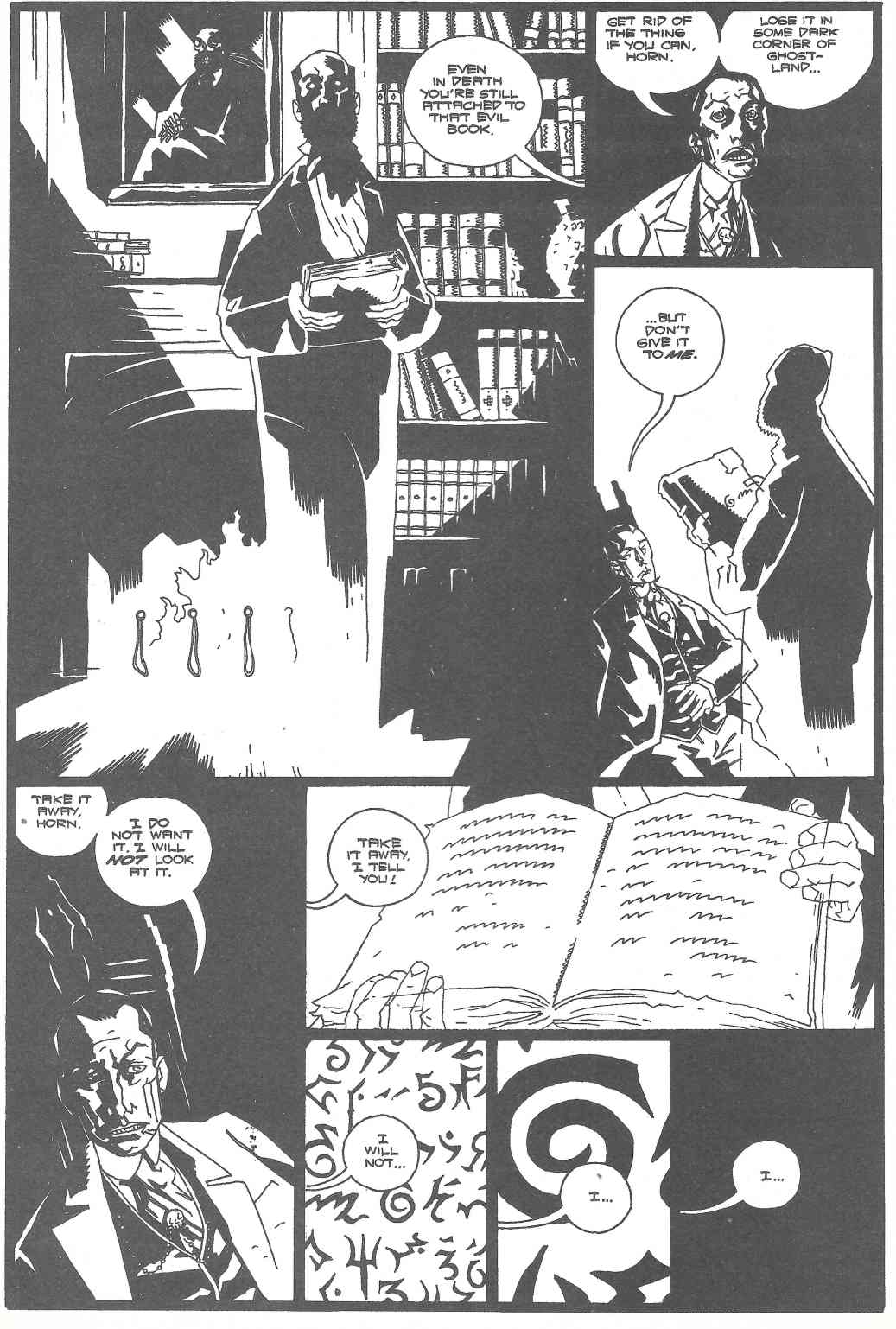 Coffin tries fighting it, but the book I made of deep eldritch magic and not easy to fend off. 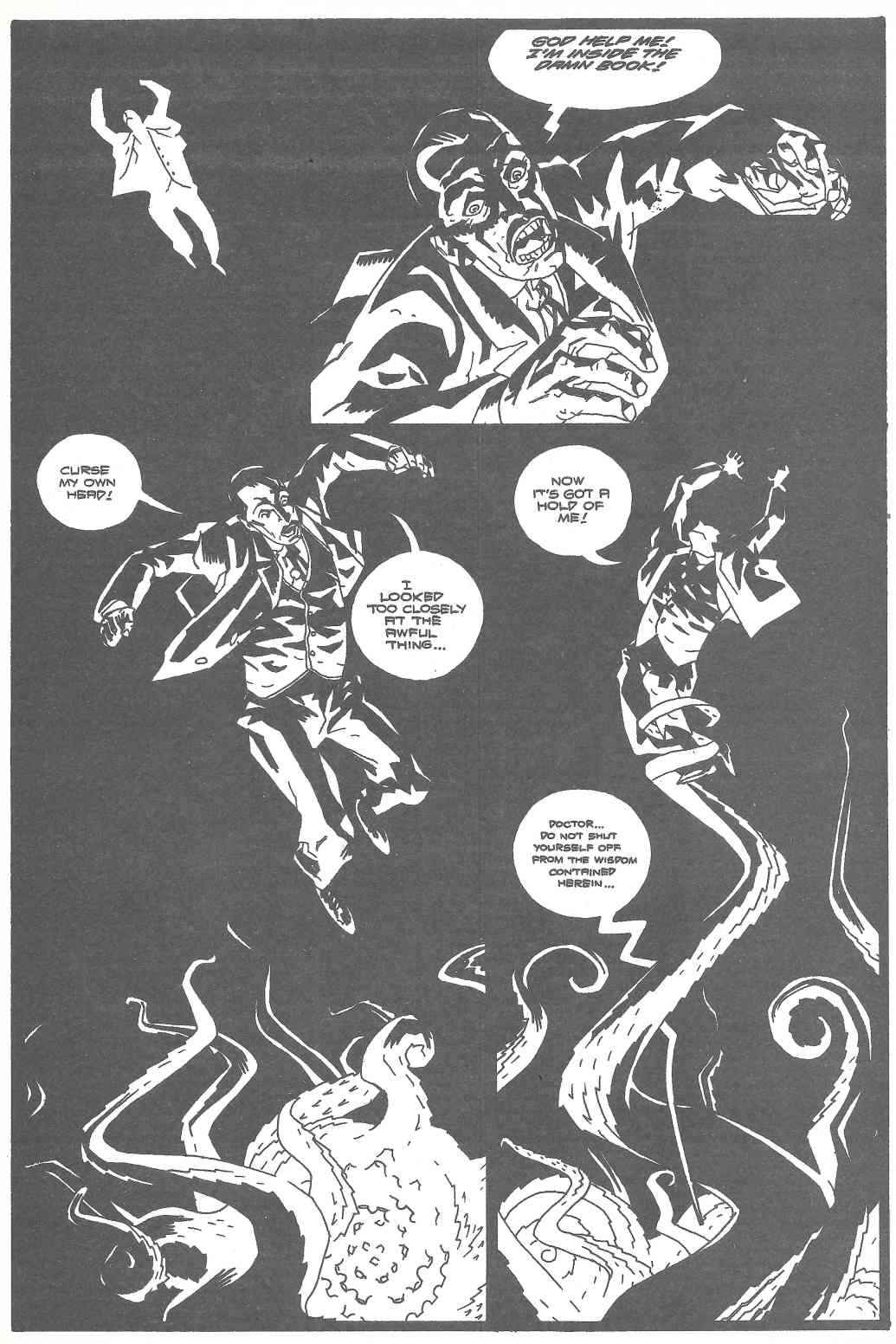 And not that it needs much help, but Horn’s spirit throws in against Coffin too. 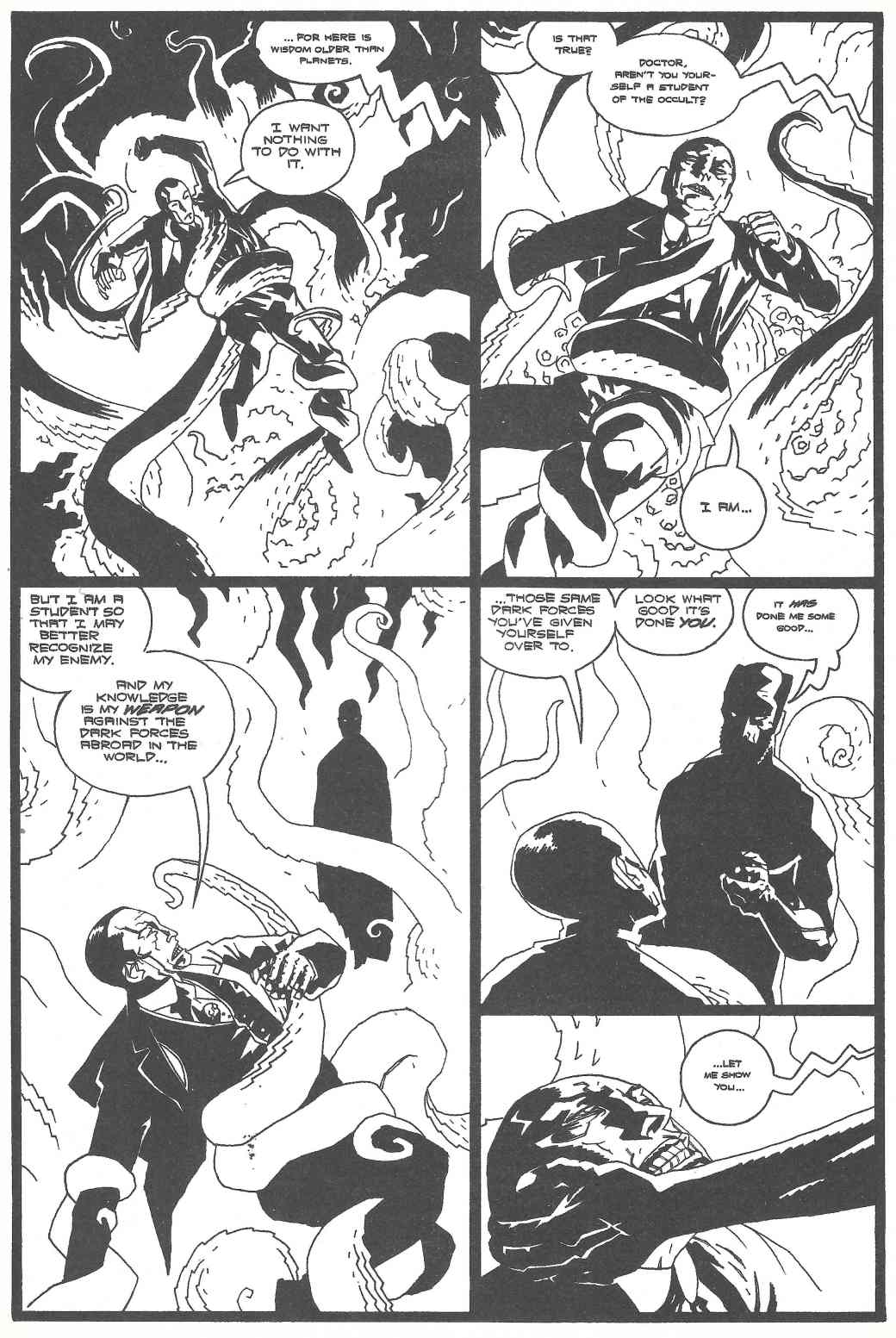 Just as it looks like the good Doctor is washed up, Albert picks that precise moment to awaken. Quicker than you can say Harry-Potter-Horcrux, Albert stabs the damned tome with his ceremonial sword. 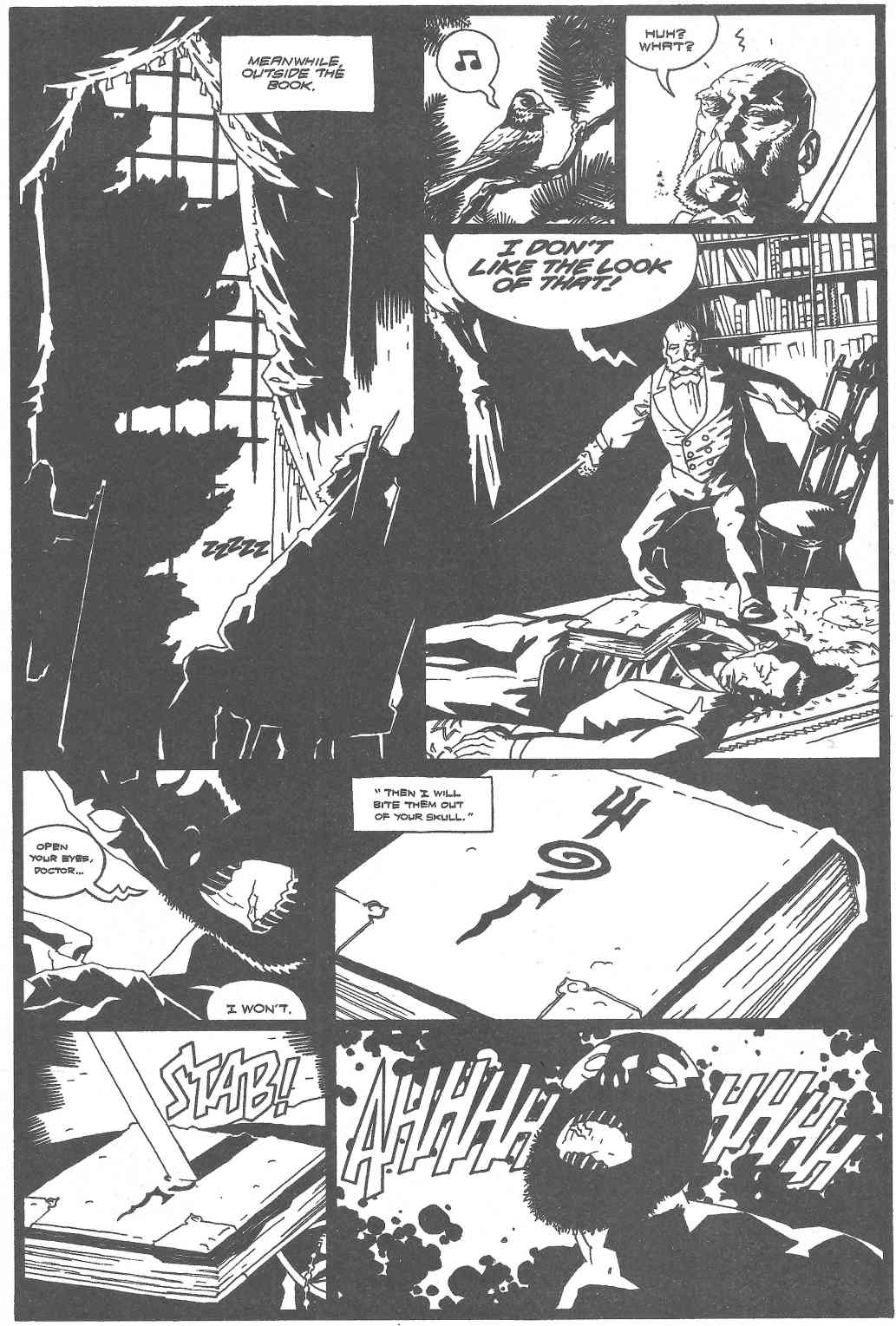 Coffin is saved and he sees to it the book has a fitting end. 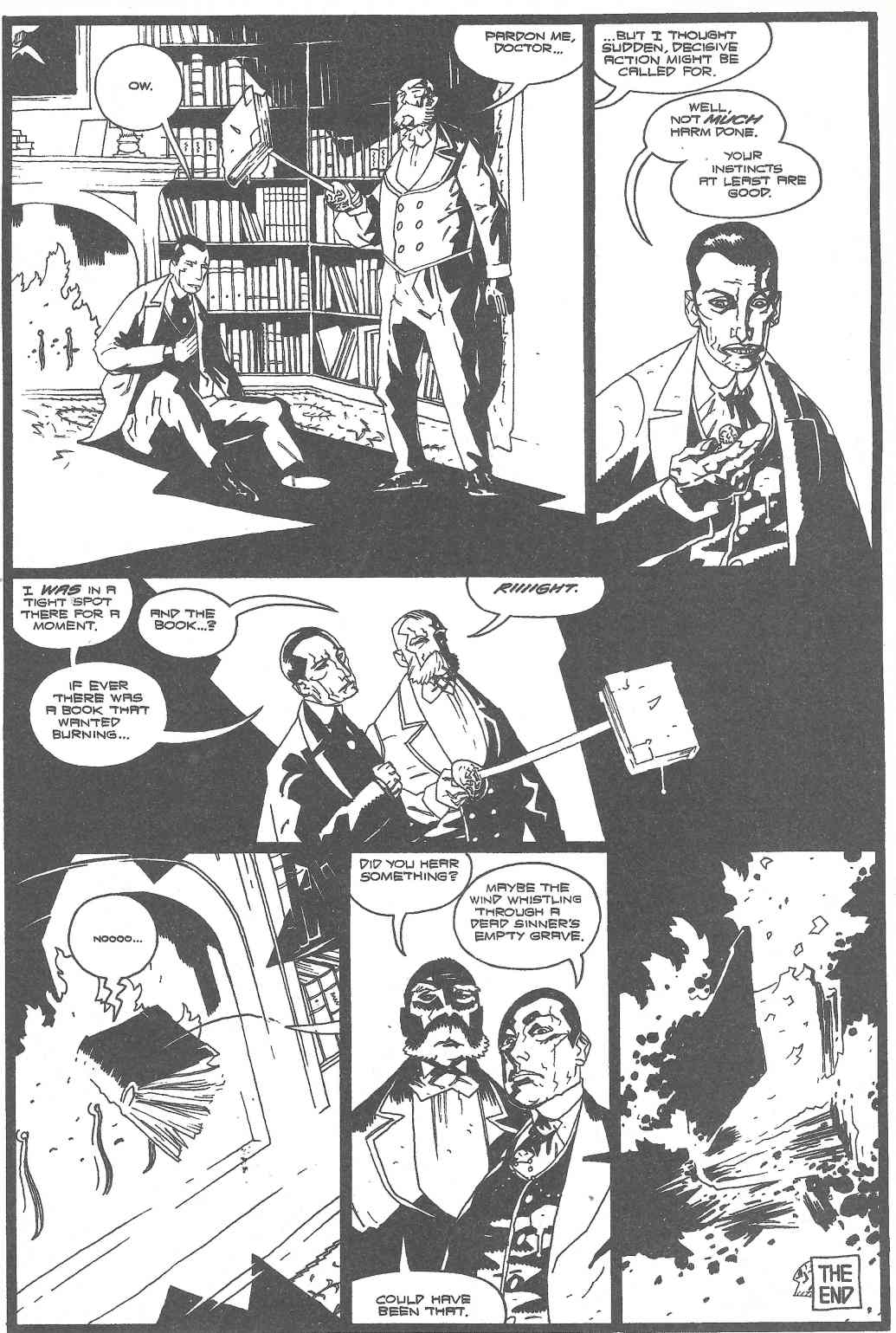 This is an extremely straightforward story, which is fine starting point. I enjoyed the art the most out of this, given this thin skeleton of a tale doesn’t really hold much in the way of depth. But in all a good start to the book…

Next up, we take a step into Scott Allie’s “The Devil’s Footprints” world. The storyline of that series has a young man attempting to right the wrongs his late father’s dabblings in magic have caused his family. Waite is the family name, but I can’t help but think that this tale is one of the father and not of the son. The listings I find don’t mention first names, so I’d have to have read the ongoing book to really know.

What I can surmise is that Allie and Showman have a neat setup here, with Waite assisting his friend Mrs. Miller in obtaining that mythos tome created by Robert Bloch, “De Vermis Mysteriis” or The Mysteries of the Worm.” To do so they must break into this woman’s house, which Mrs. Miller provides a moment of comic relief in finding the key. 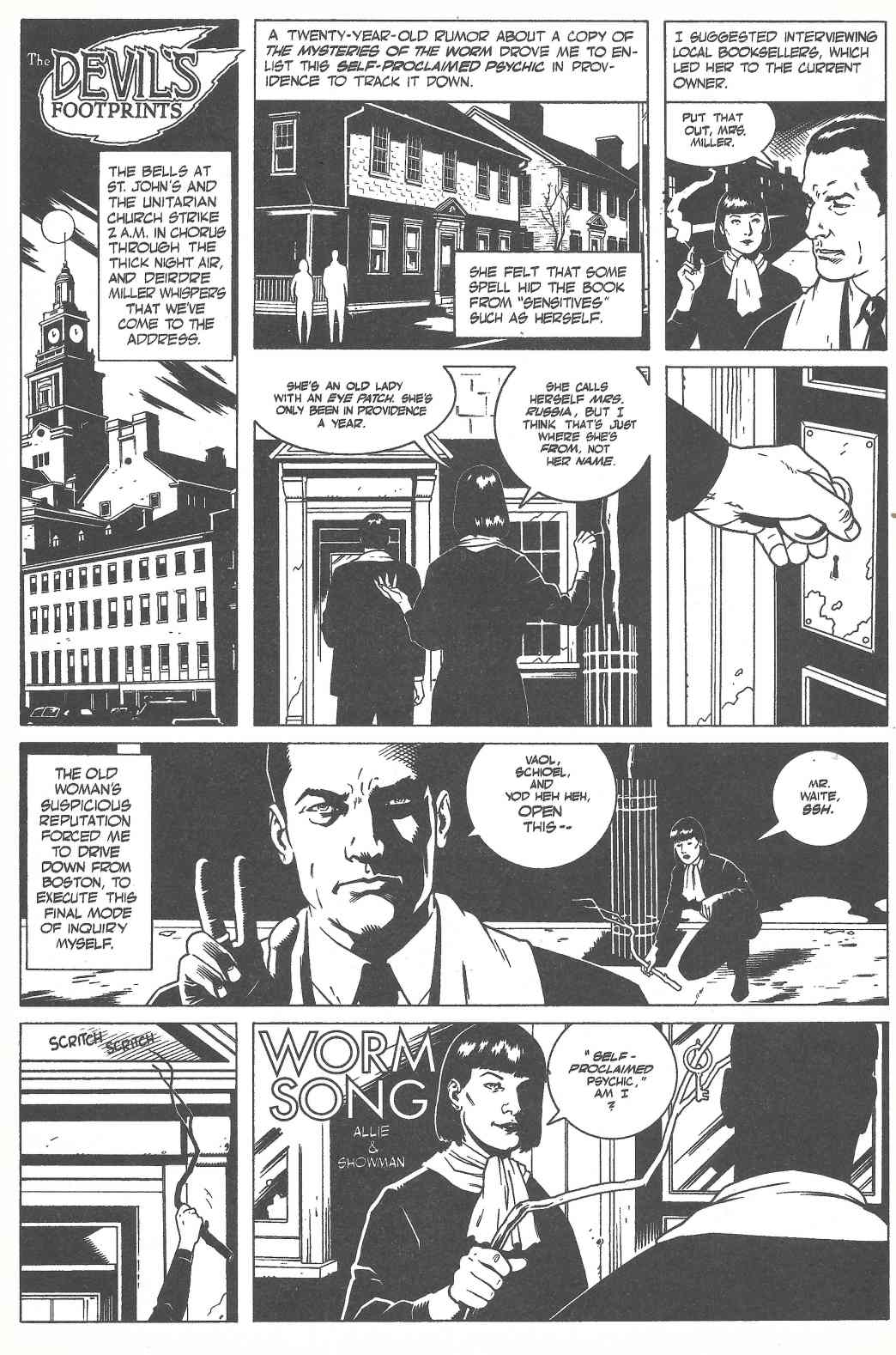 The house appears vacant with no bookshelves, but plenty of other odd items of note. 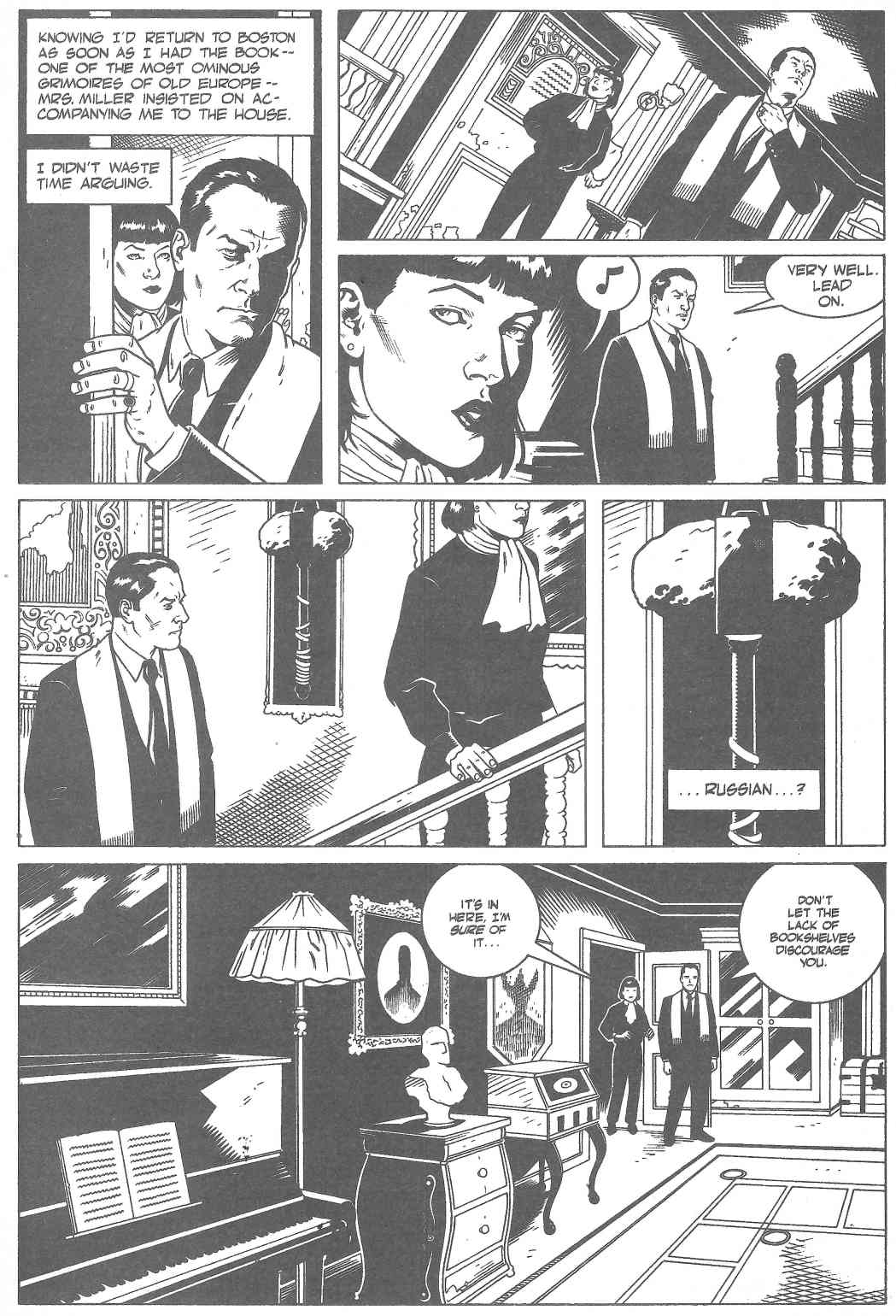 A logical deduction has Waite try the piano, which in turn leads to find the book. As they convince themselves of its authenticity, their trespassing is found out! 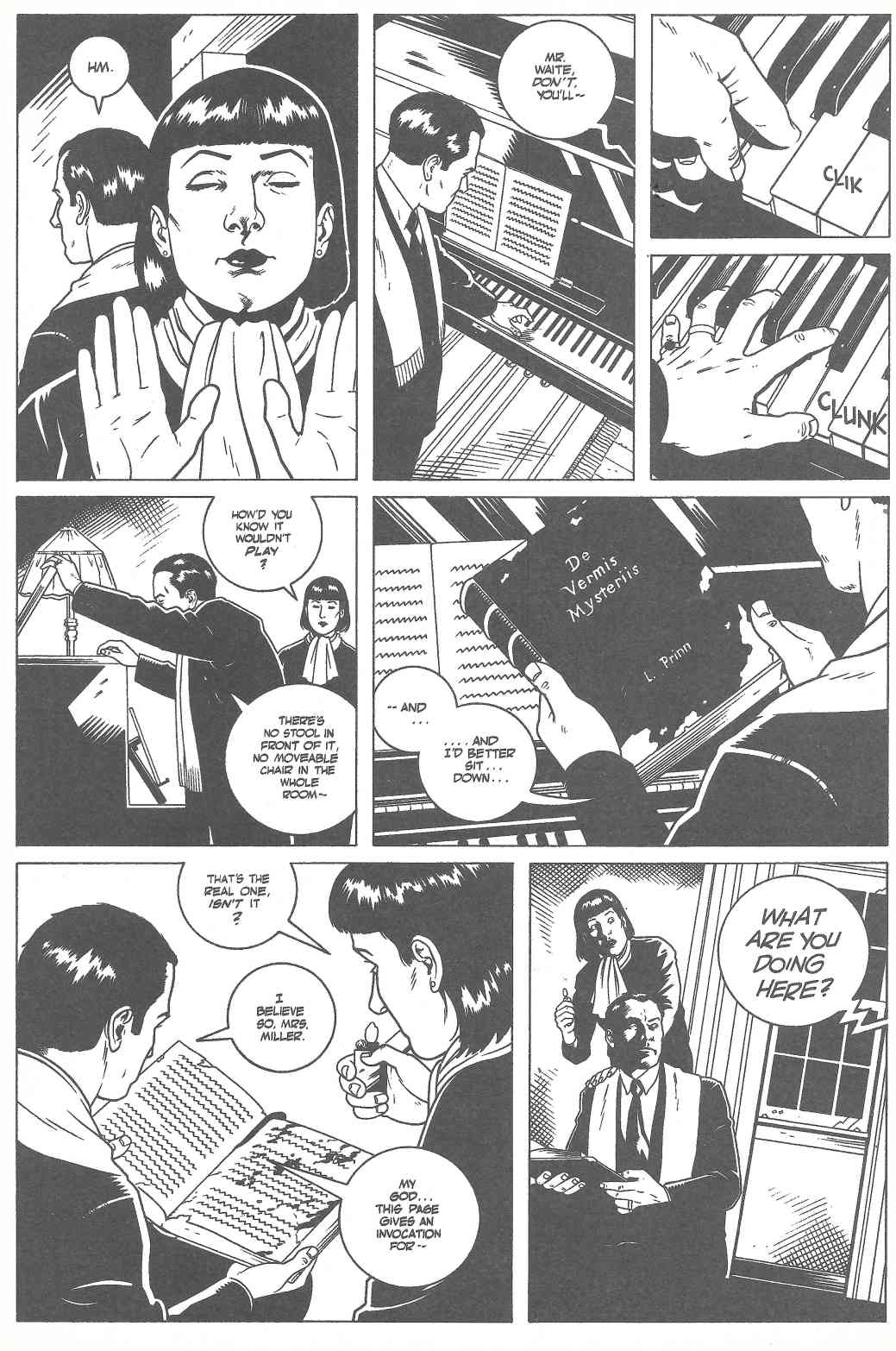 The old Russian woman appears to actually be an old Russian witch. She demands their names, to which Waite lies to her. She quickly tries to throw a spell on them, but that backfires as Waite uses the same magic on her, knowing her name is Ruscha, a very powerful witch. 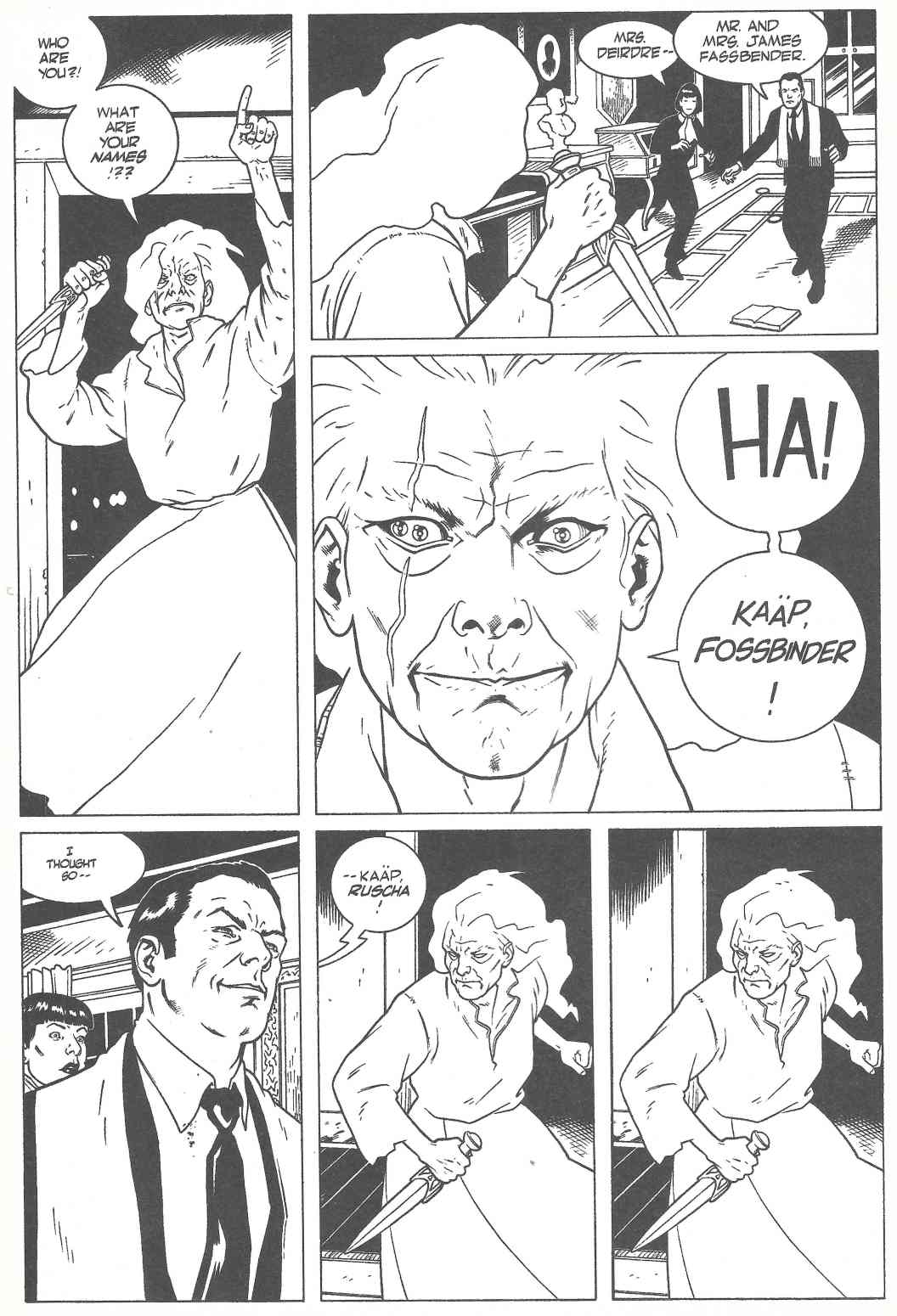 Using the book, Waite causes the wound across her face to reopen… 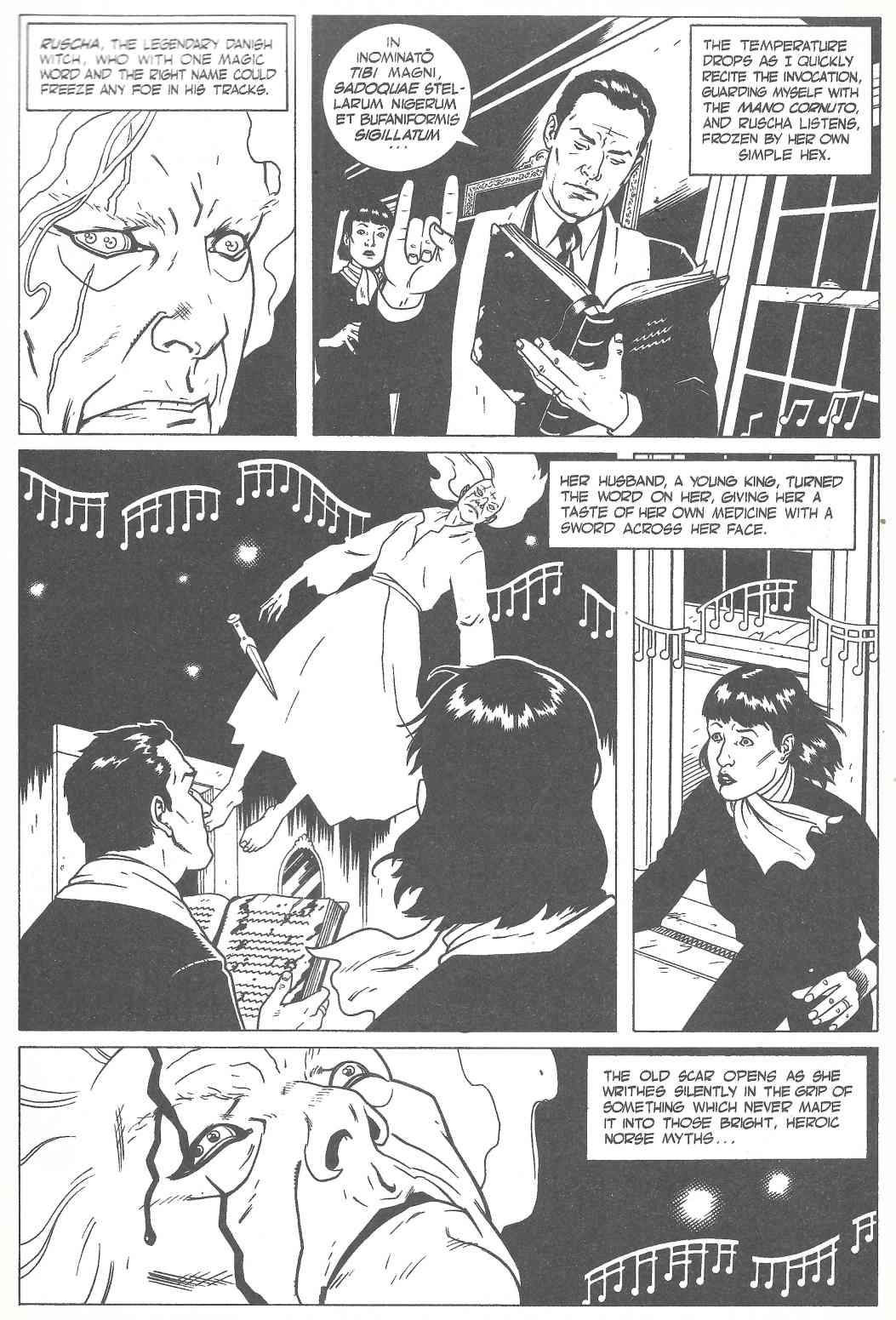 …and then summons this odd tentacle to devour her. 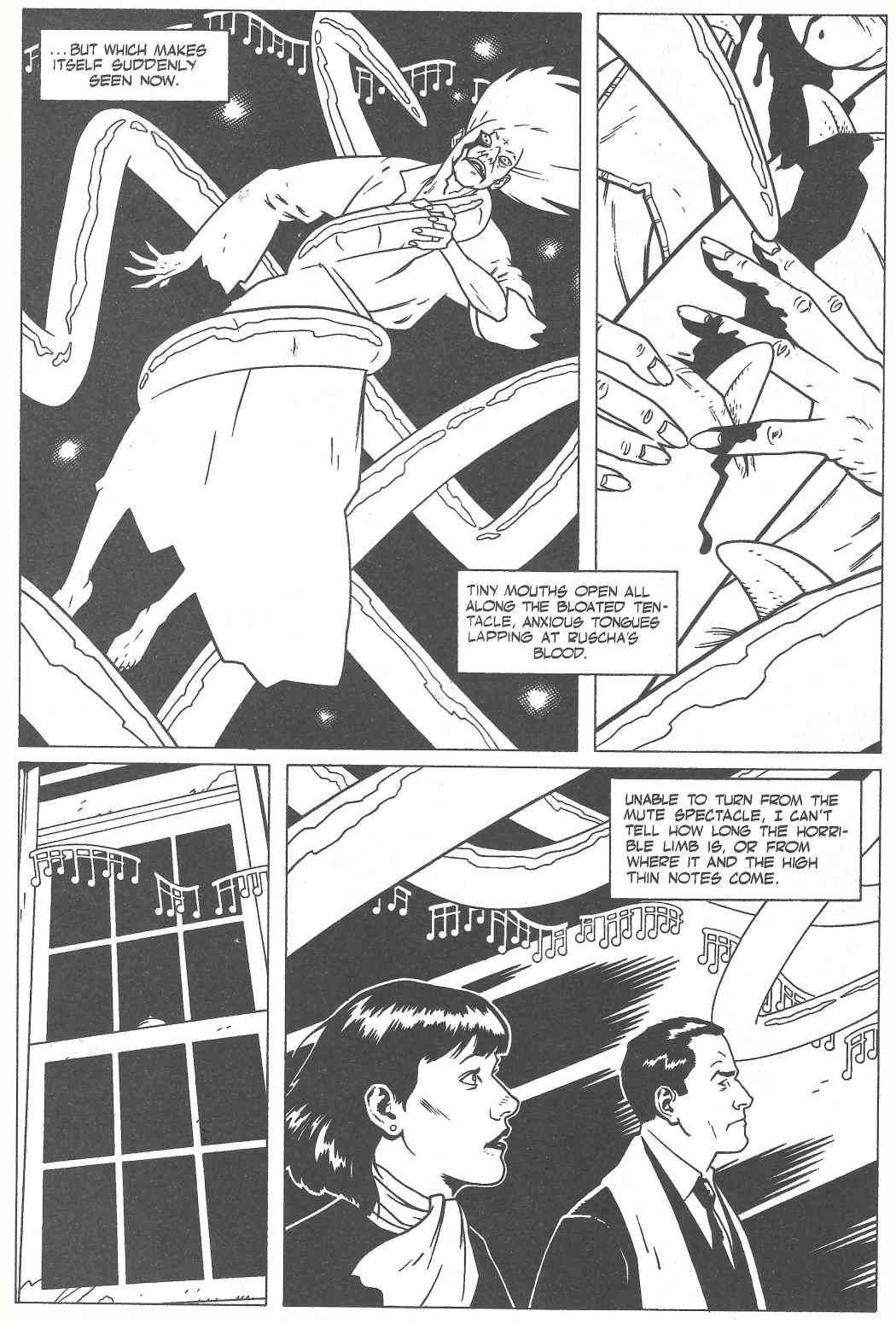 Once her dead husk hits the floor, Waite explains that he took a rather large risk in summoning the creature. One that could have cost Mrs. Miller her life as well. 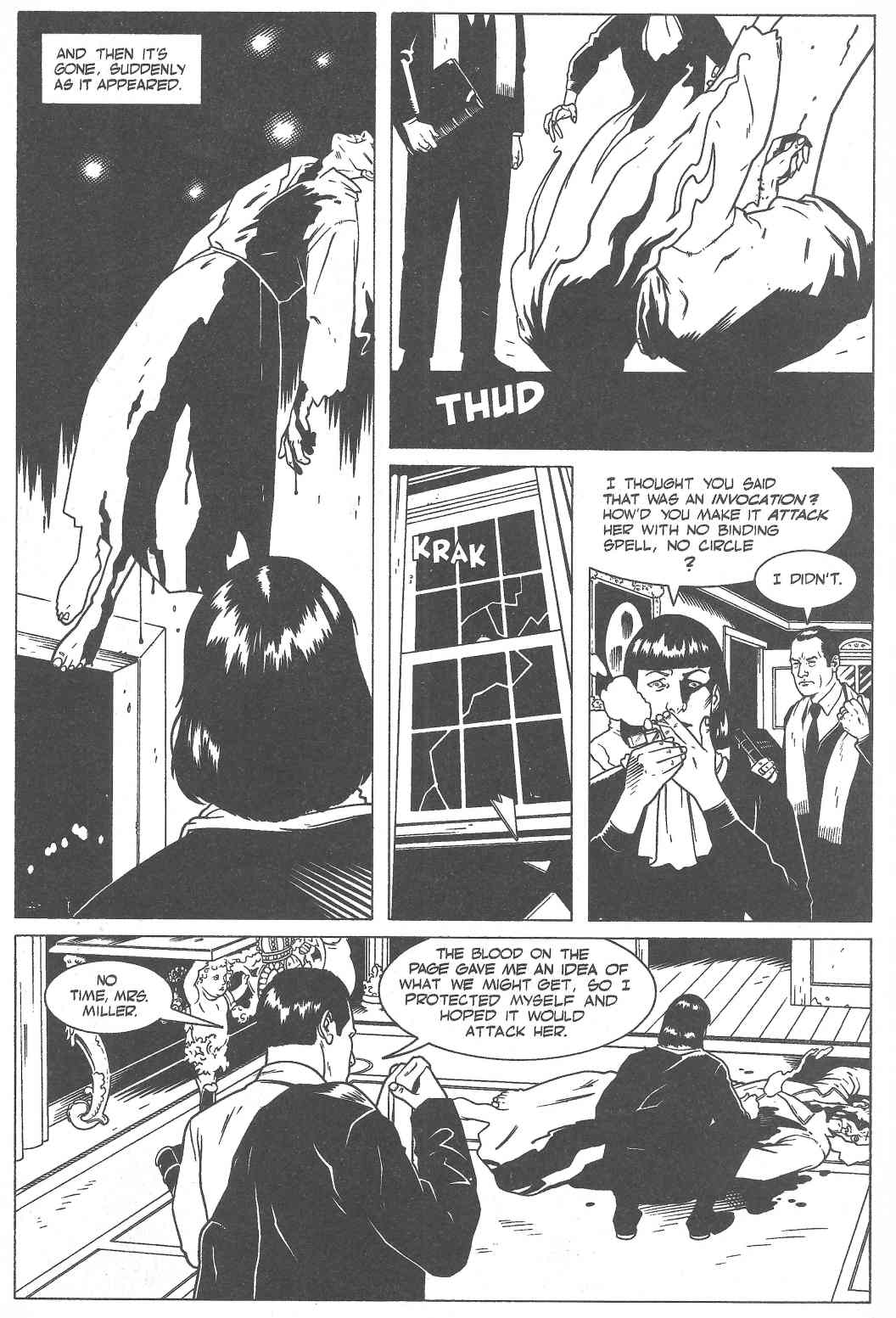 Mrs. Miller doesn’t appear to be amused by this, but neither is Waite at having been told this woman was probably Russian and not Ruscha, one of Denmark’s most notorious witches. 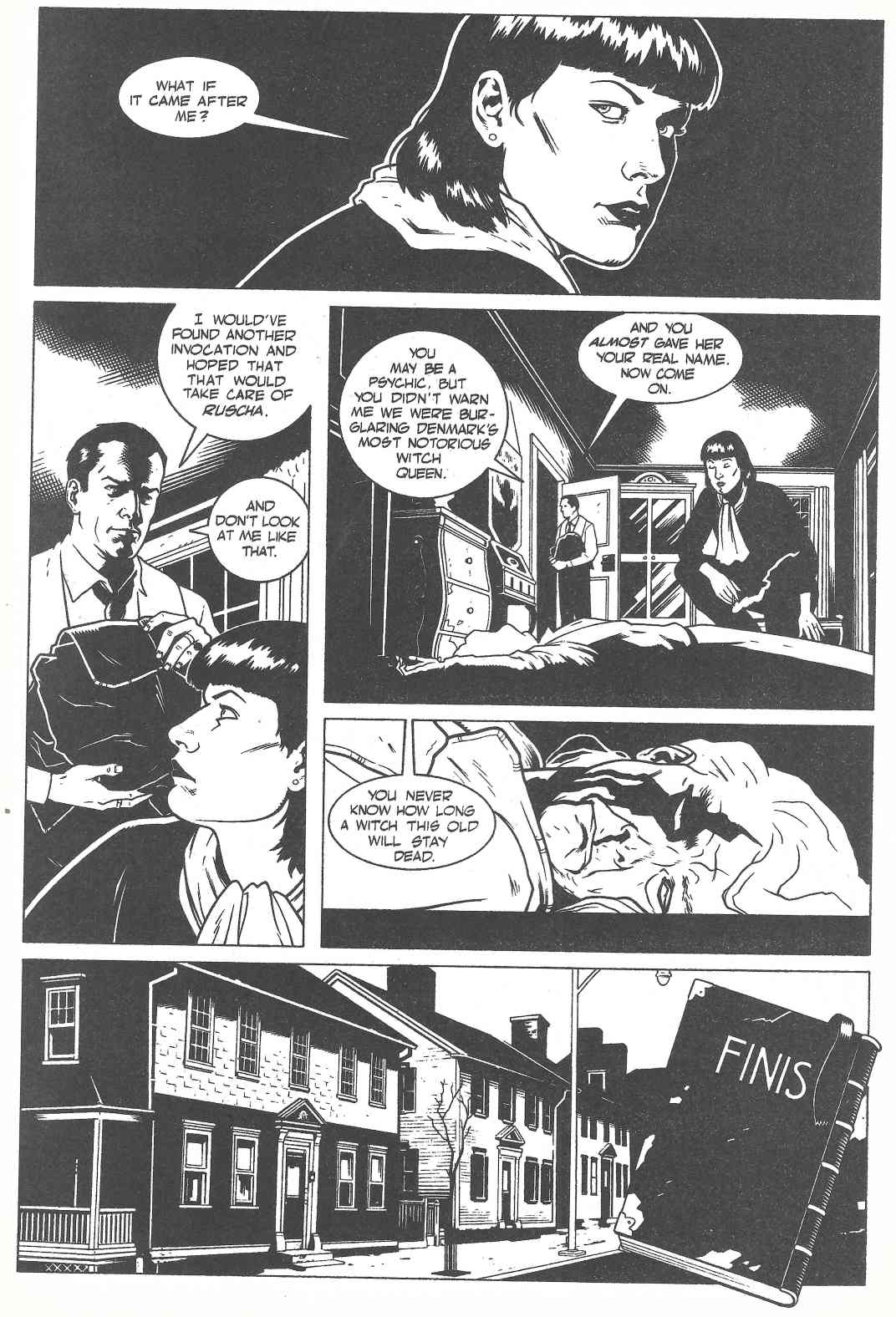 Thus this tale of theft and shenanigans comes to a close. I enjoyed it quite a bit, but feel the characters need a longer bit to really take on weight with me. I want to know both individual’s backstory and watch them take on a longer menace.

Last up is “The Keyhole” a thoroughly Lovecraftian tale where two inventors buy a strange house containing an even stranger appliance. The story is top notch mythos fare, but the art by the ever amazing Vince Giarrano really puts it over the top. He’s still painting, by the way, and his work just keeps improving.

For this tale we find our two protagonists arriving at the abandoned house hoping to find the later prior occupant’s “machine through which worlds and dimensions far removed from our own are rendered visible.” They approach the door and use a key to open the lock. 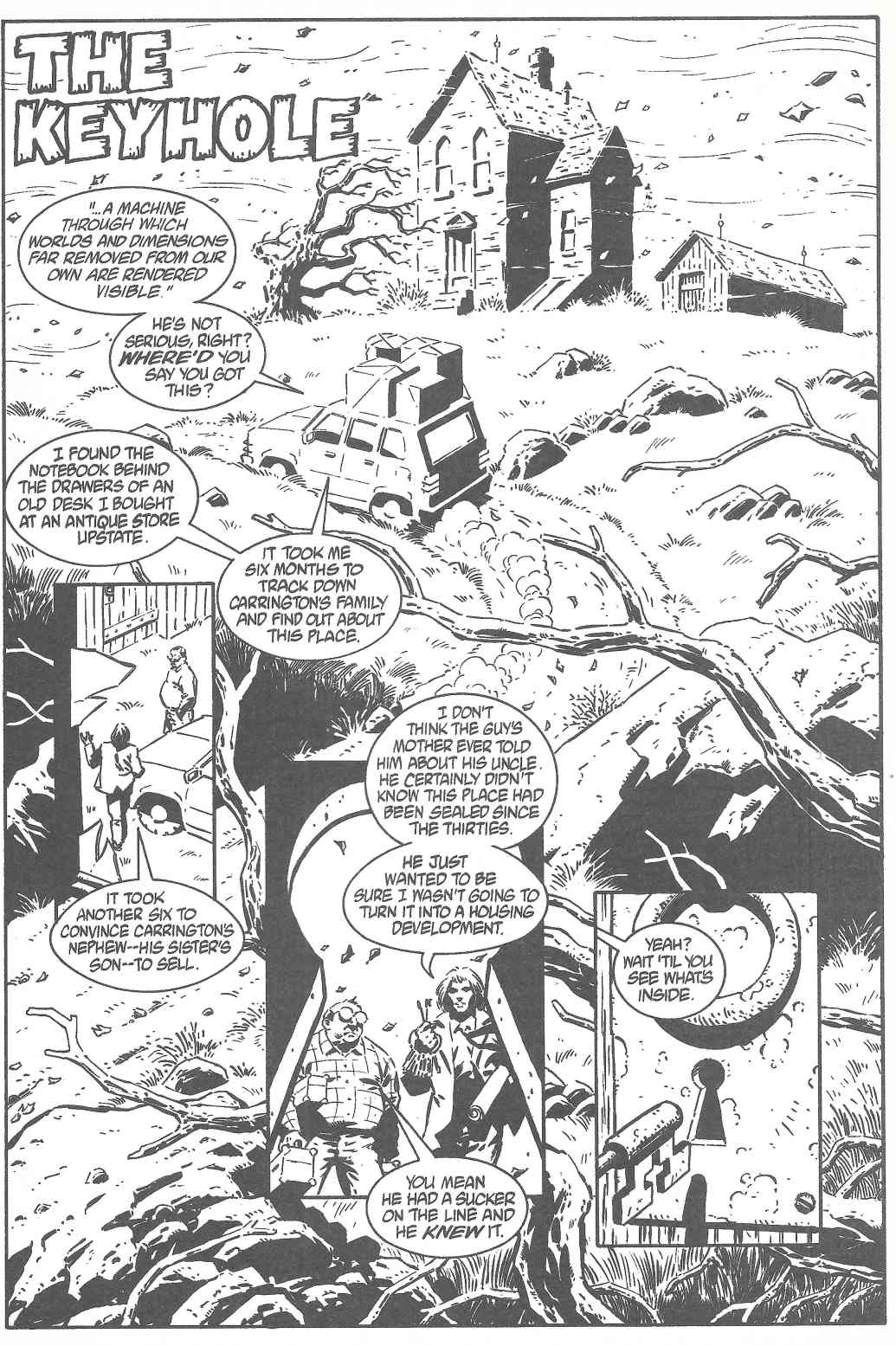 This feels like another take on the invention used in From Beyond, and it works in that context very well. The two men find this massive machine and start to fix it up. 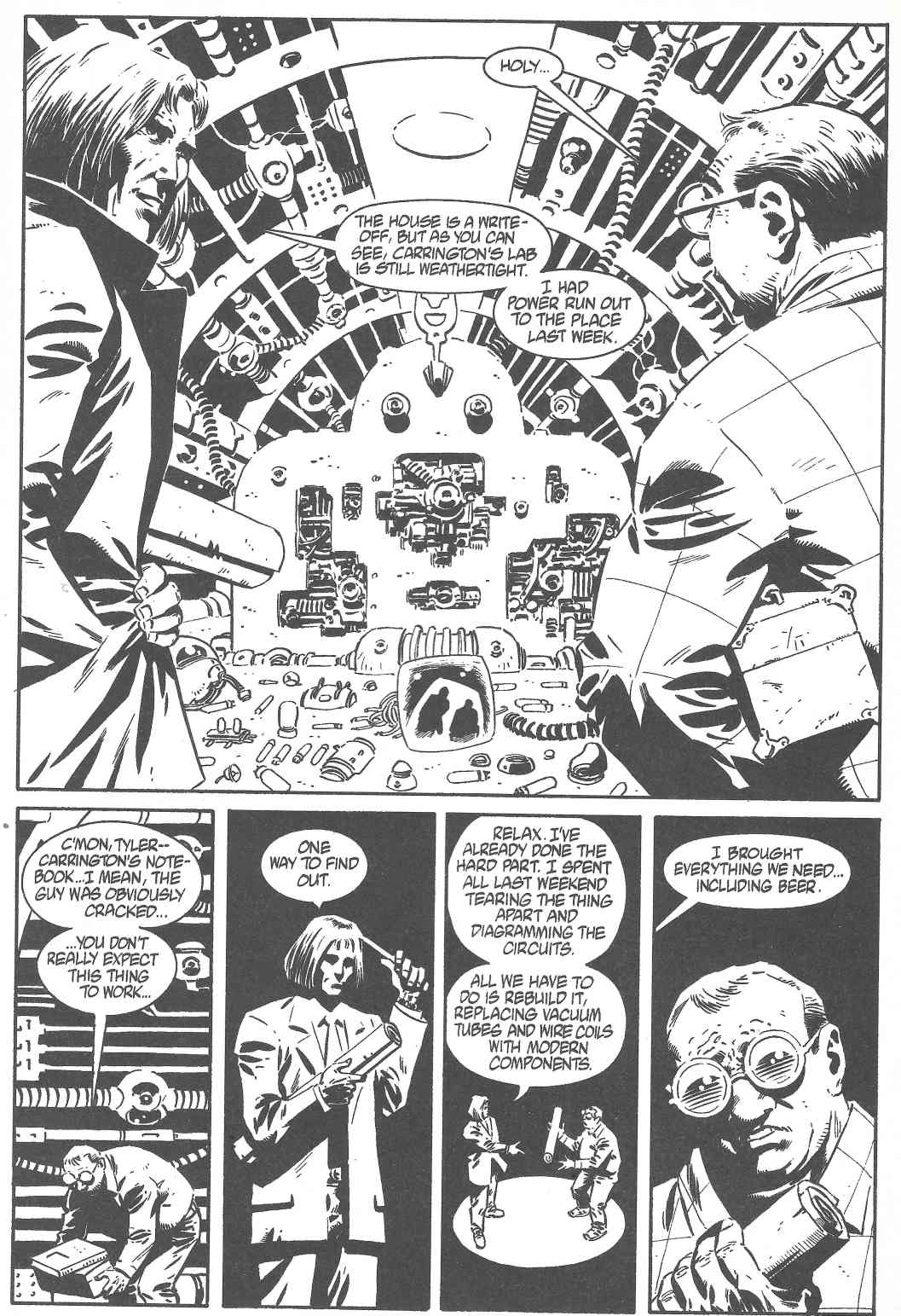 While doing so, we are treated to selections from his letter that made our protagonists desire to see it working again. These haunting passages will soon be understood in the broader context of his final warning. 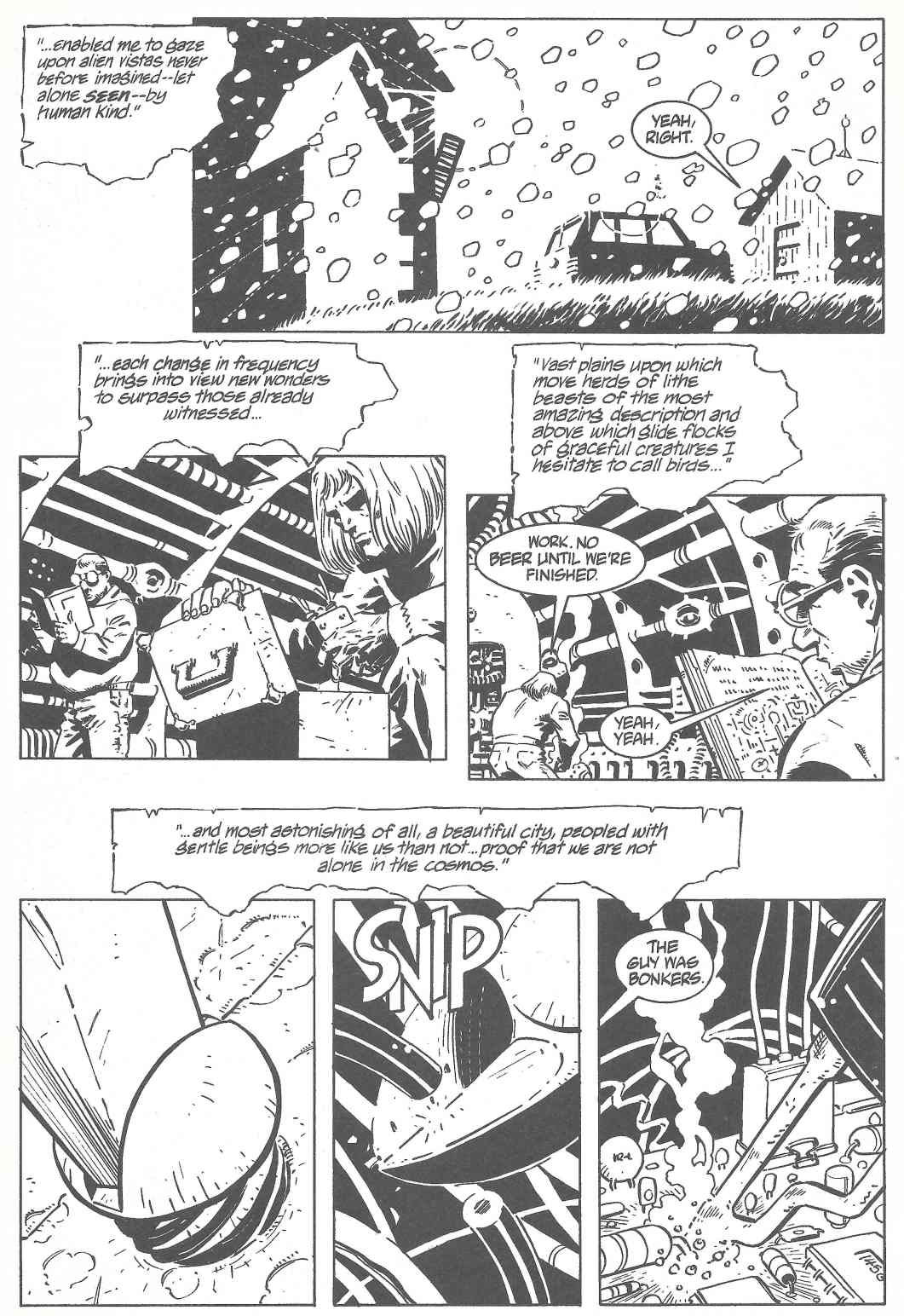 As the pair approach completing their repairs, the last bit of the inventor’s diary serves as a warning to not use the machine. That it is too dangerous. The pair do not heed this warning a plug the machine in. 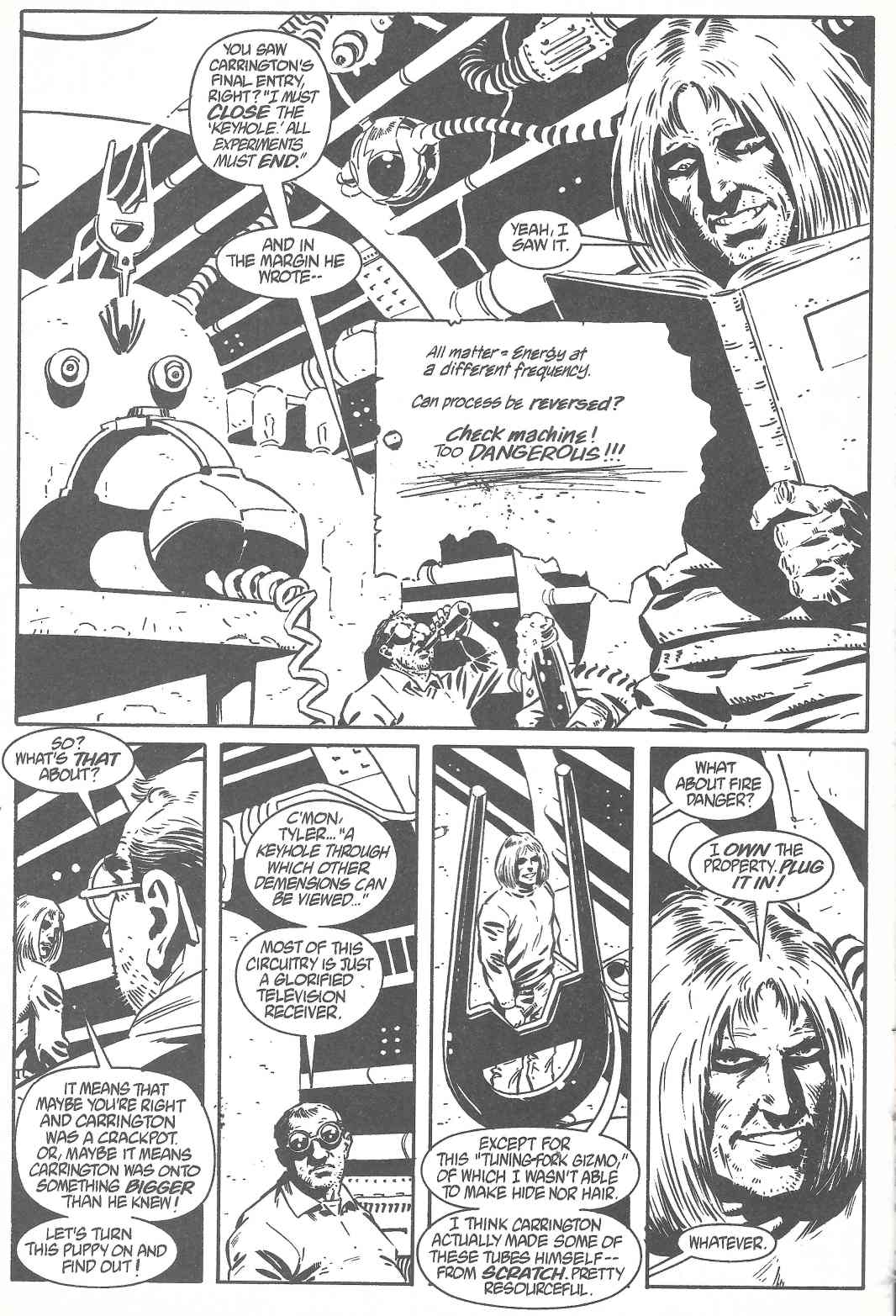 The lead scientist uses the VR helmet and sees into realms beyond our own. Everything appears to be going swimmingly. He starts searching these vistas. 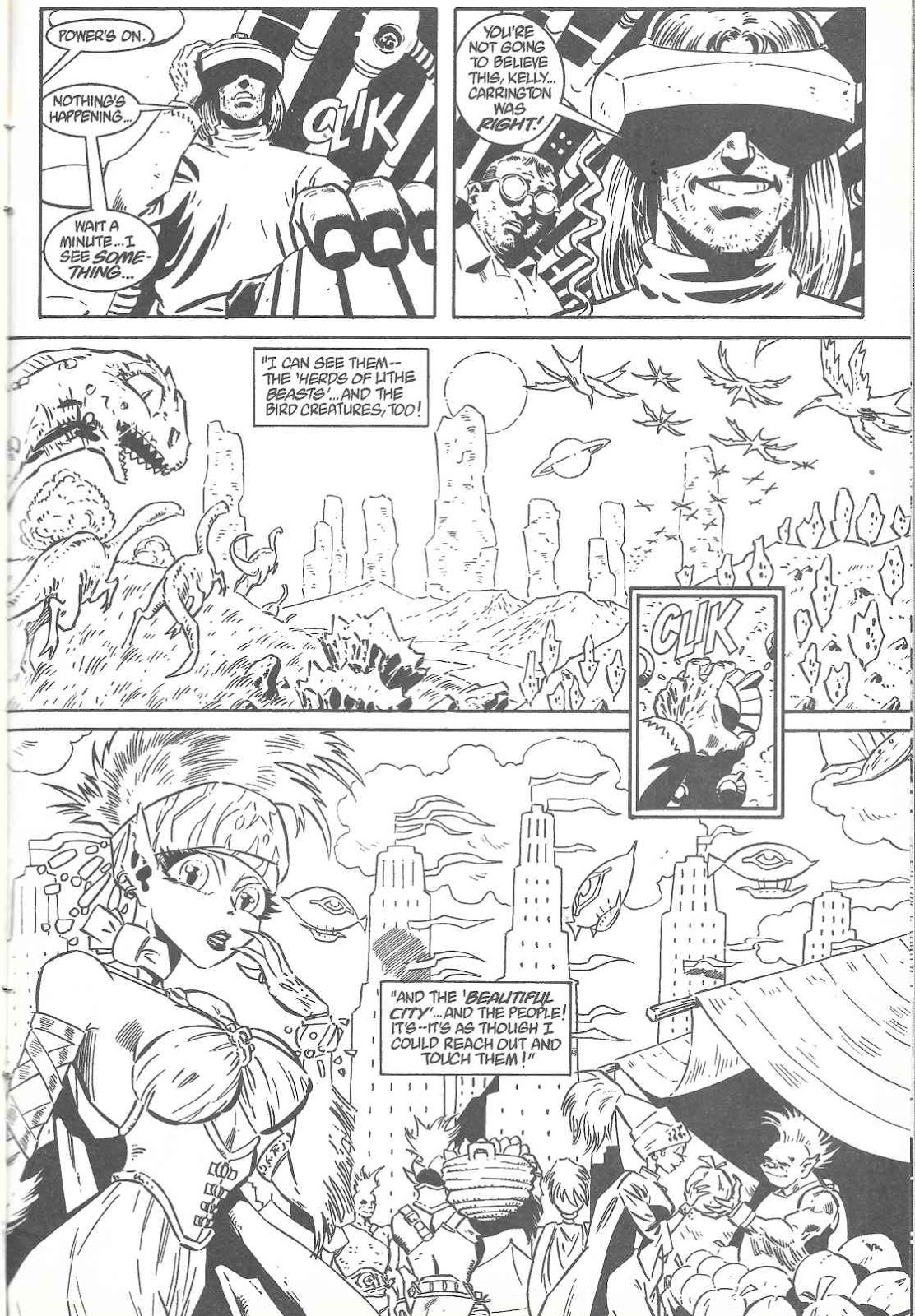 But curiosity earns him a terrible vision, as the machine finds one of those Azathoth-type entities. Something unrelenting and madness inducing, and our friendly scientist gets a face-full of it. He throws the mask off and his second, Kelly, looks in but finds nothing is there. It’s as if the thing has moved on. 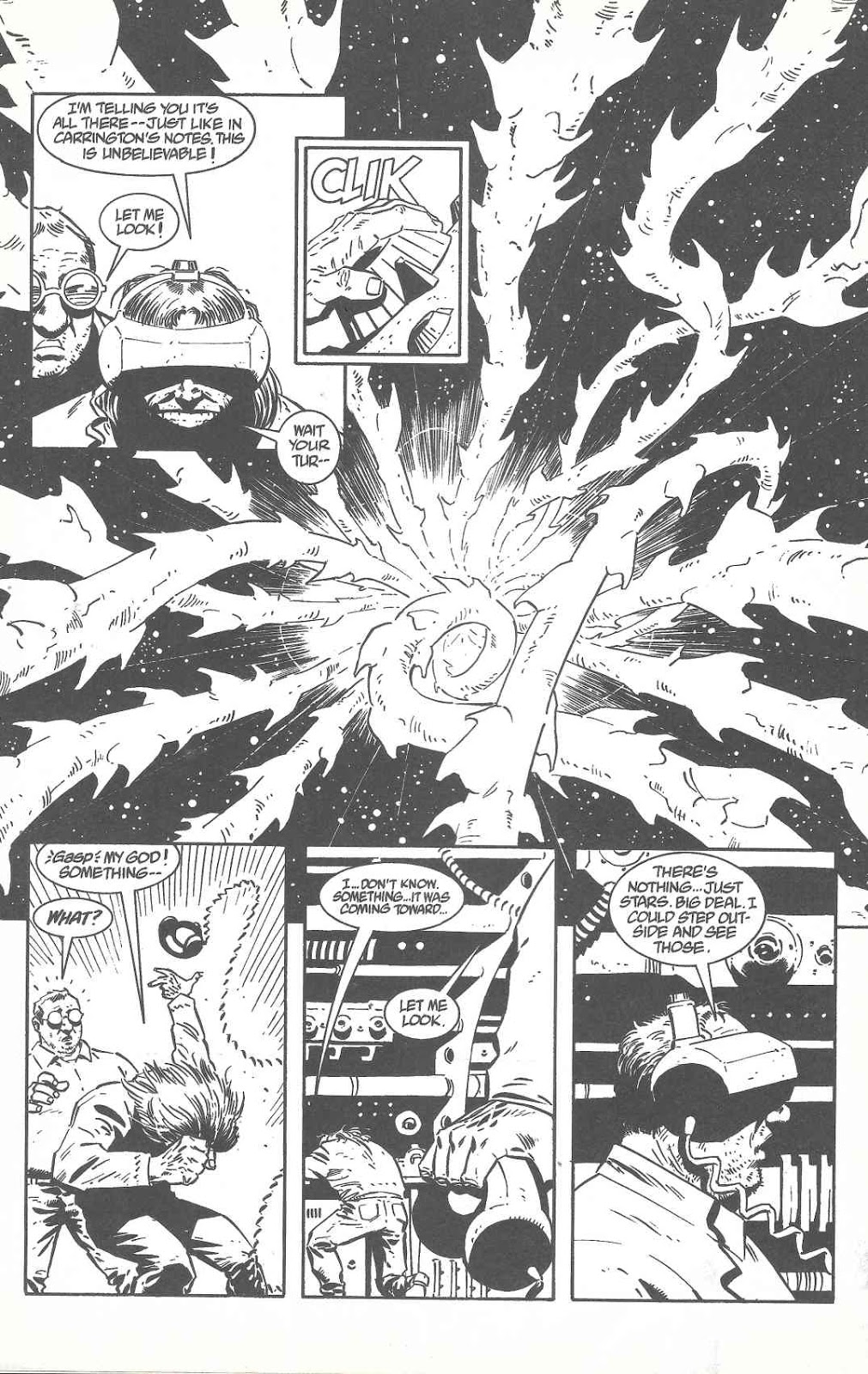 It’s only when our long-haired friend realizes the thing in the VR helmet cut him that he recognizes the danger they are in. As he quickly puts the pieces of the warning together with what he’s just experienced, Kelly starts looking back through the dimensions. Every one that the first viewer saw have now been utterly demolished. 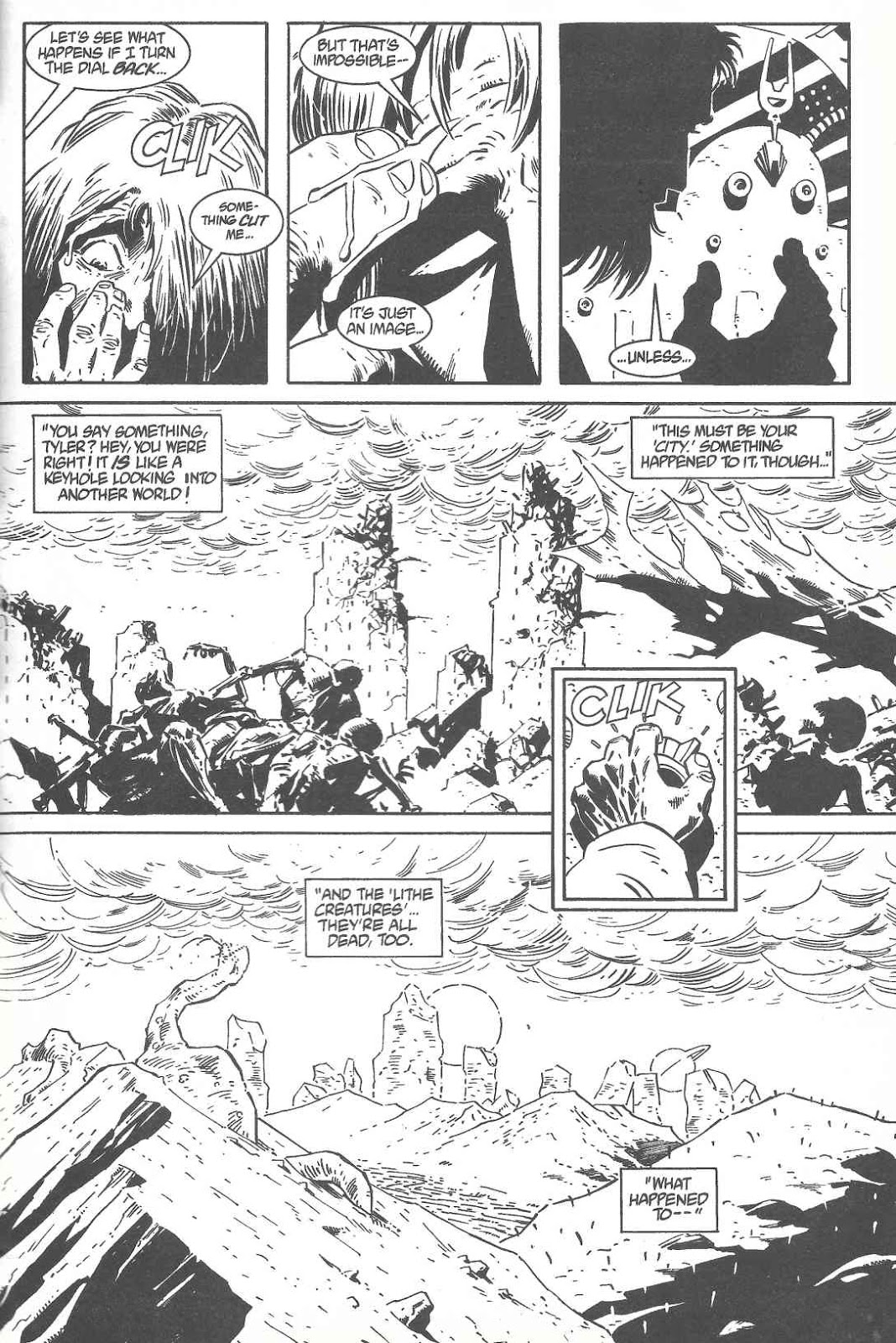 The final passage now makes sense, the machine isn’t just a viewer, it allows the creature passes along its signal back to the user. Unfortunately this knowledge arrives a little too late for our pair, as they are swept up in thorny tentacle attacks. 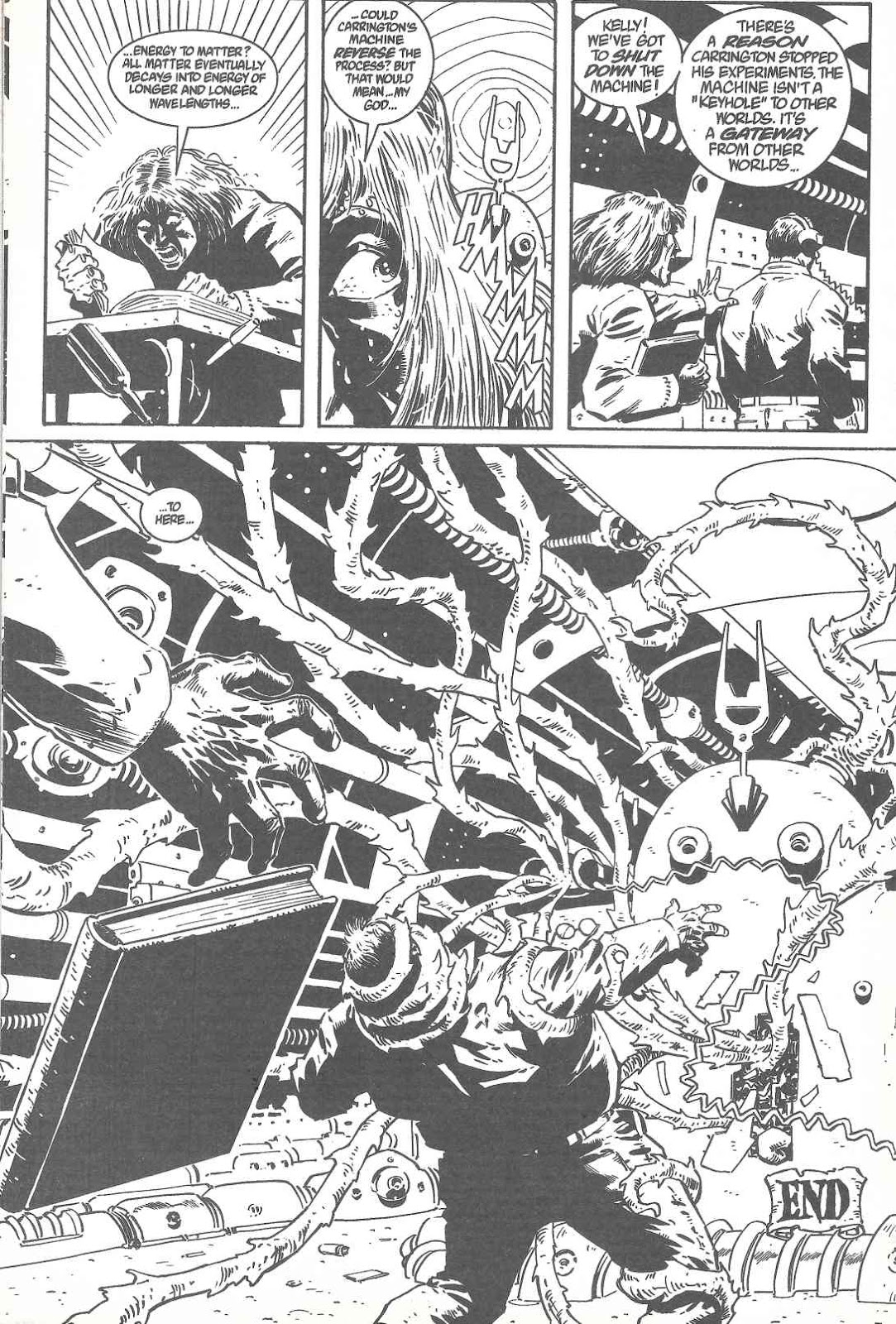 Great little horror bit and I love that dark ending. This book is a fun little find. If DHP ever updated the Codex with more Lovecraft tales, I’d love to find them. They are lots of fun!
Posted by SonOfCthulhu at 3:42 AM