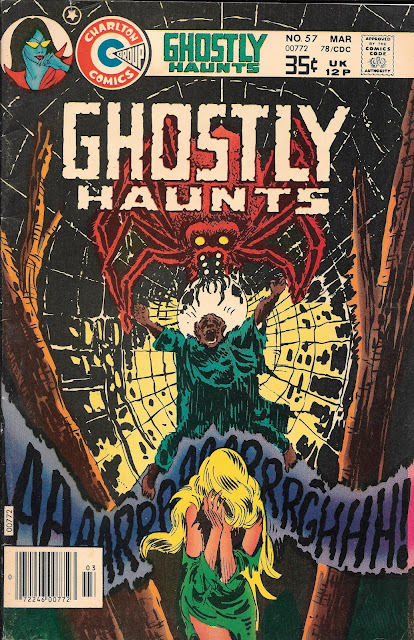 An anthology from ’78 shows us how it’s done

Another of my crapbox finds that was part of my lost childhood collection, Ghostly Haunts #57 from 1978 came at the VERY tail end of that title’s life. Dubbed “Ghostly Haunts” after a name change in issue 21 from the prior “Ghost Manor,” the series died after 39 issues. This is the next to the last one.

And as sad death it was, given that the Charlton title skirted the censors with stories that would have felt at home in any of the EC line of books. The tales were introduced by the mod-witch “Winnie the Witch,” a blue-skinned glam babe. And what tales they were! The book featured stories by Jack Abel, Vince Alascia, Nicola Cuti, Steve Ditko, Joe Gill, Pete Morisi, Warren Sattler, Joe Staton and Tom Sutton. And I know a bunch of names isn’t going to sell this as good as actual book content, so here we go… 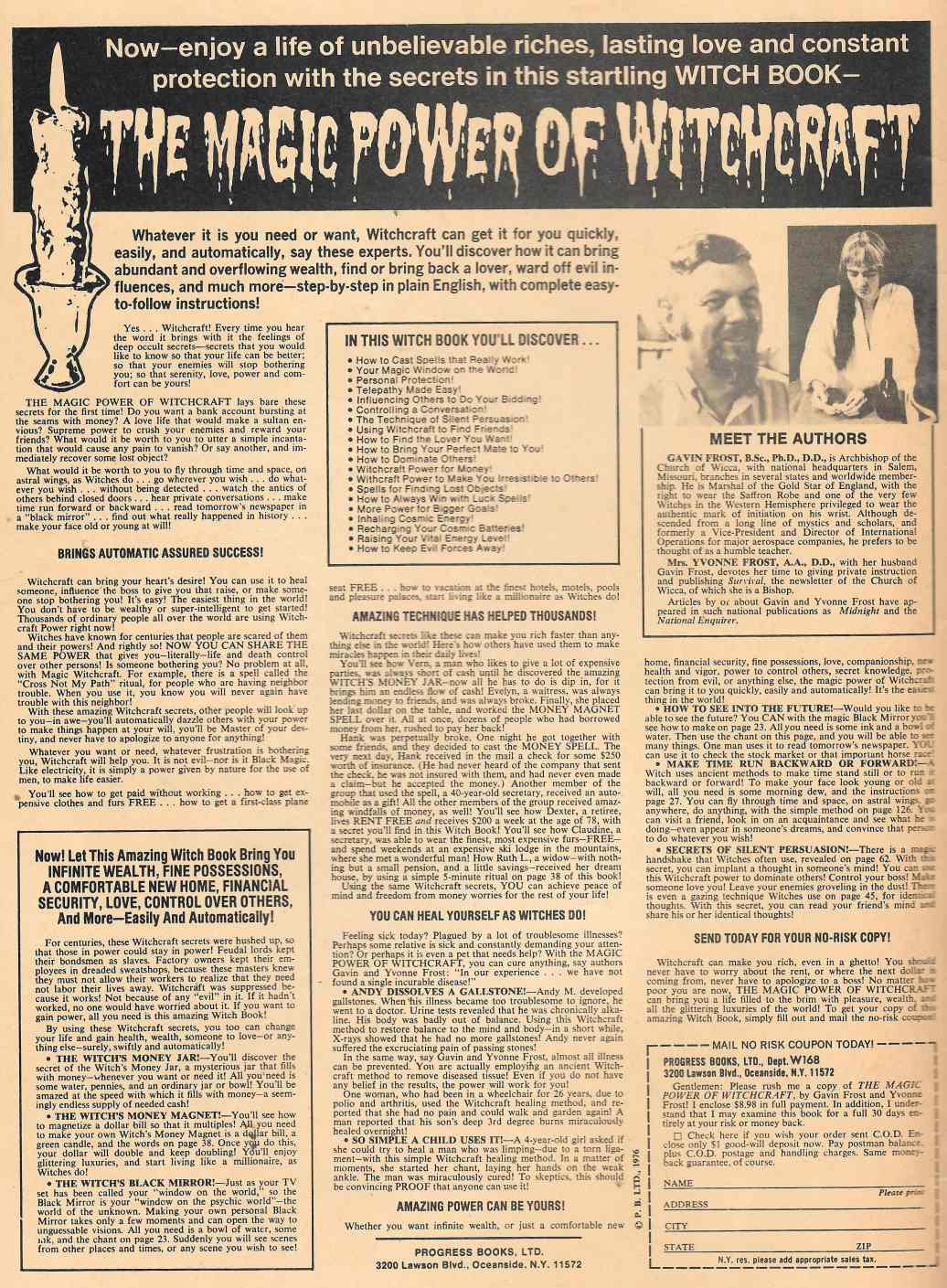 …WOAH! Before we get started, we need to talk about the advertisement on the inside front cover. How many of your comics offered to give you the power of ACTUAL WITCHCRAFT?

None, I’m going to bet because they were not as cool as Ghostly Haunts.

We start off this trio of tales with this Cuti tale of a man who seeks a chessboard. 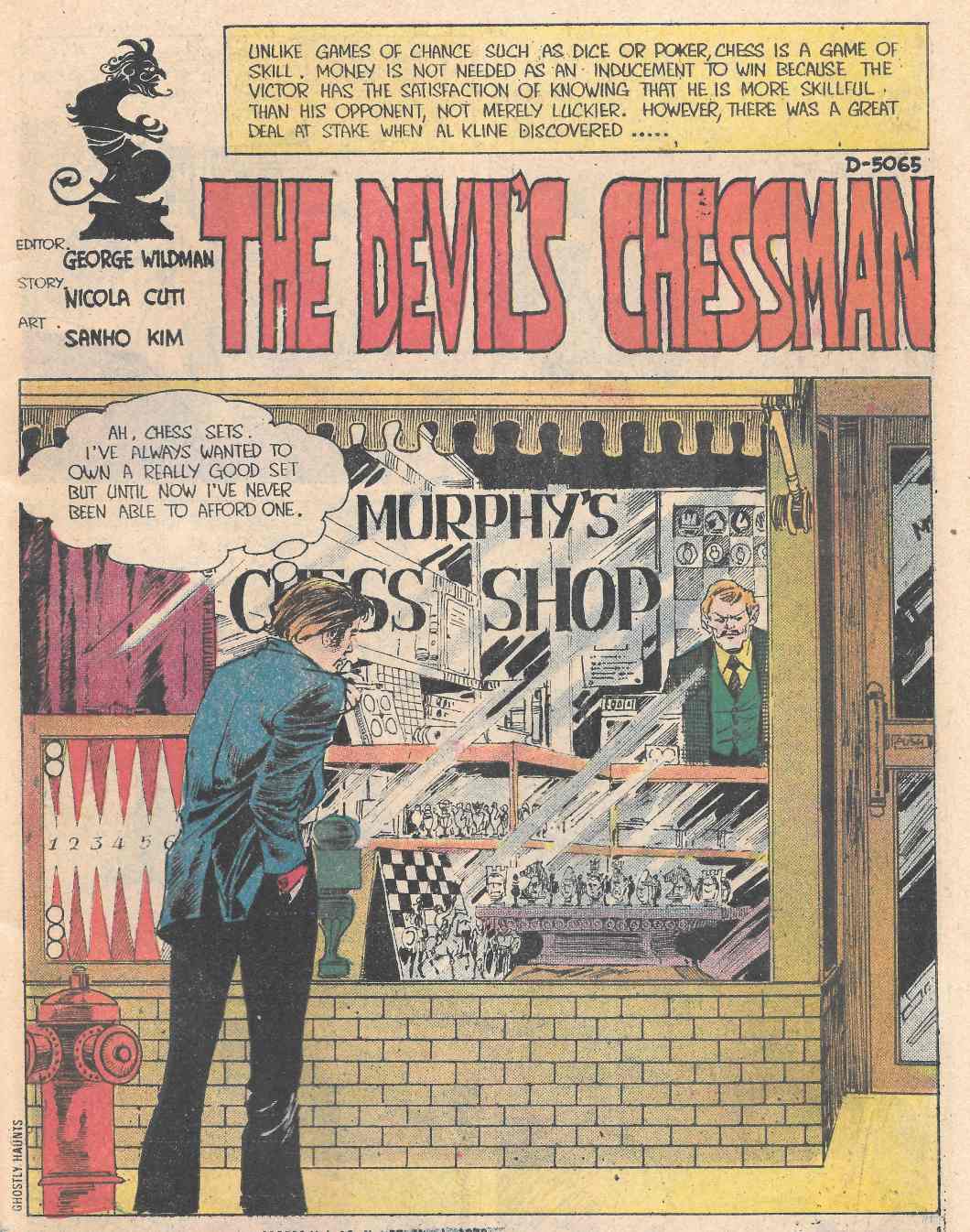 And he has an eye on this exquisite set that features lifelike faces on each of the pieces. Perhaps he selects it because, as a famous sculptor himself, he recognizes the rarity of the detail work. The pricing is extremely reasonable as well. Almost too reasonable. 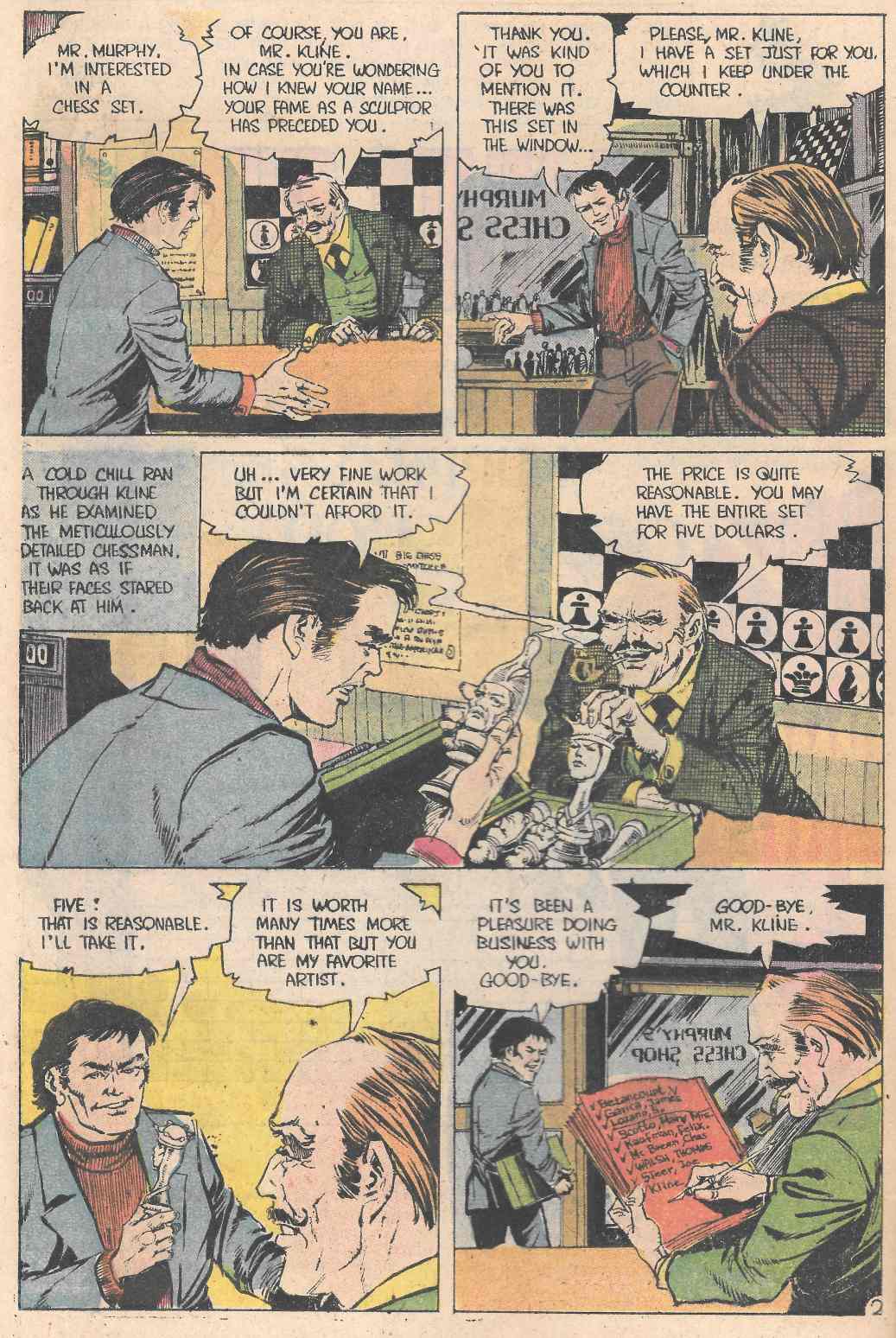 As Mr. Kline buys the chess set and ignores that his name appears to be taken down by the shopkeeper. That night he notices that one of the pieces has no face, and decides to ask shopkeeper Murphy about it the next day. But that was not to be as a nightmare clues Kline in to what’s really going on. 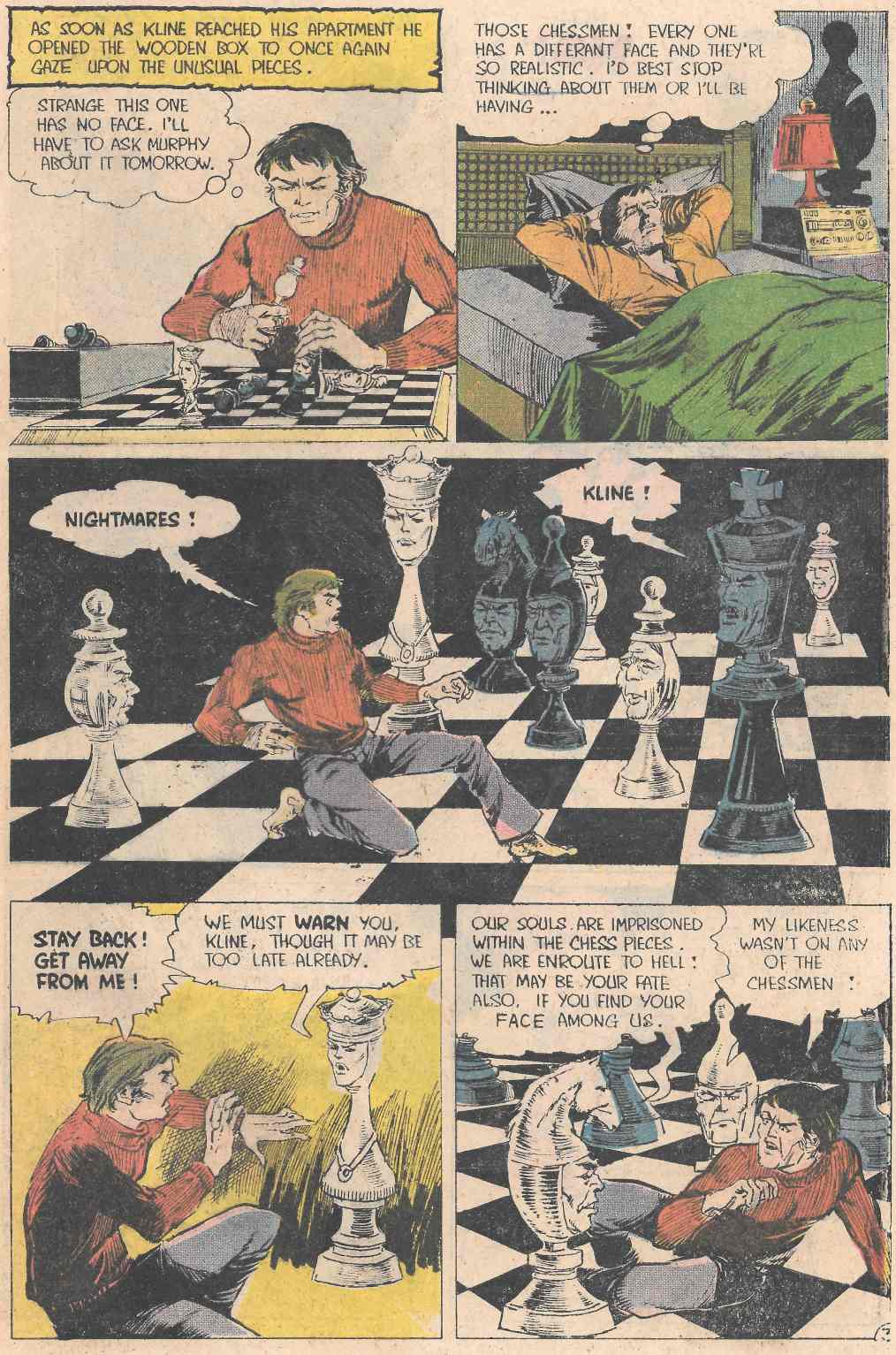 It appears that Kline signed a deal with the devil and now he will have to pay his fair share. The chess piece even has his face on it already. 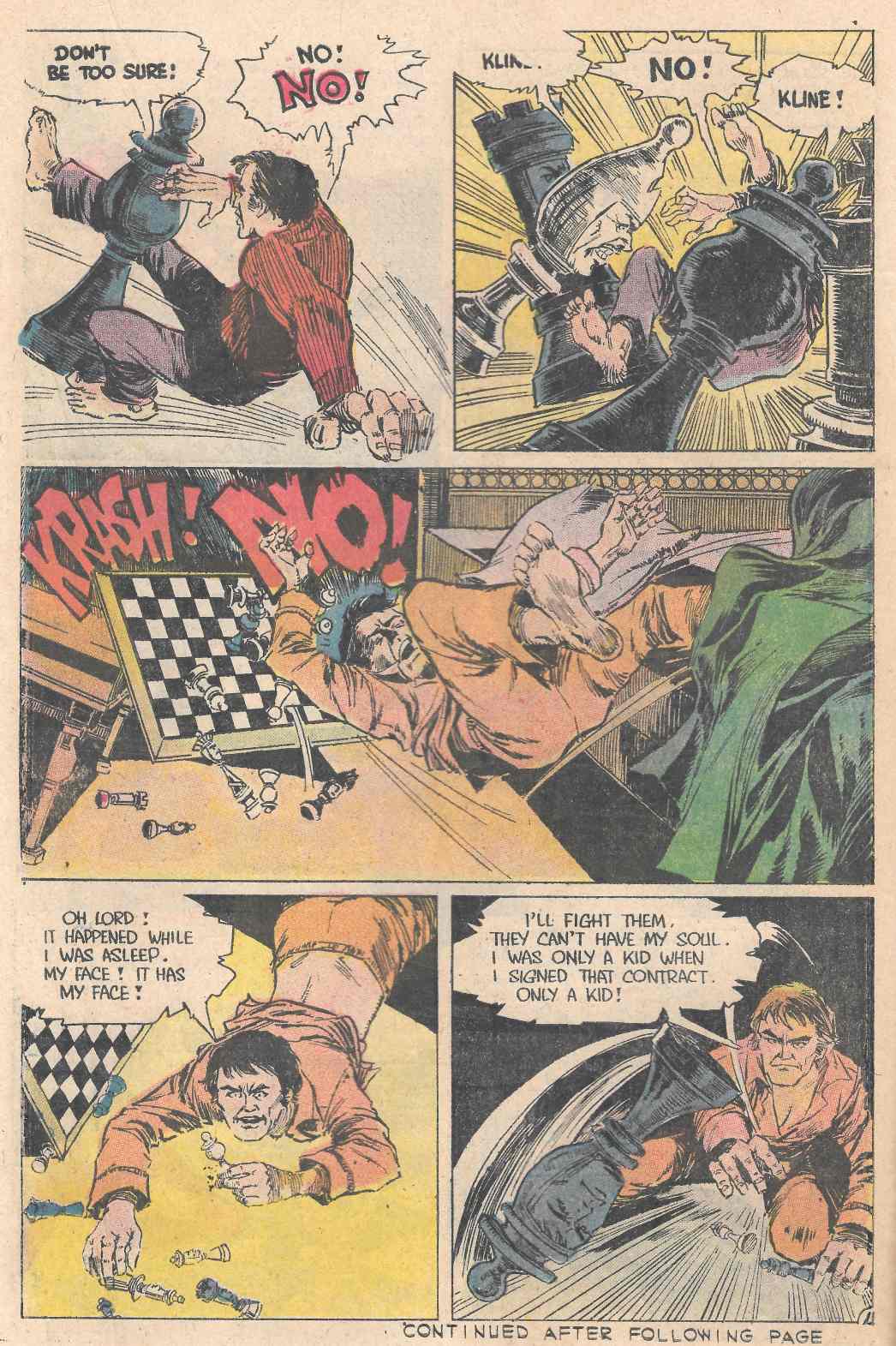 In the end, there appears to be nothing Kline can do but return the set. Murphy is more than happy to take it back, since the shopkeep appears to be in league with Satan. 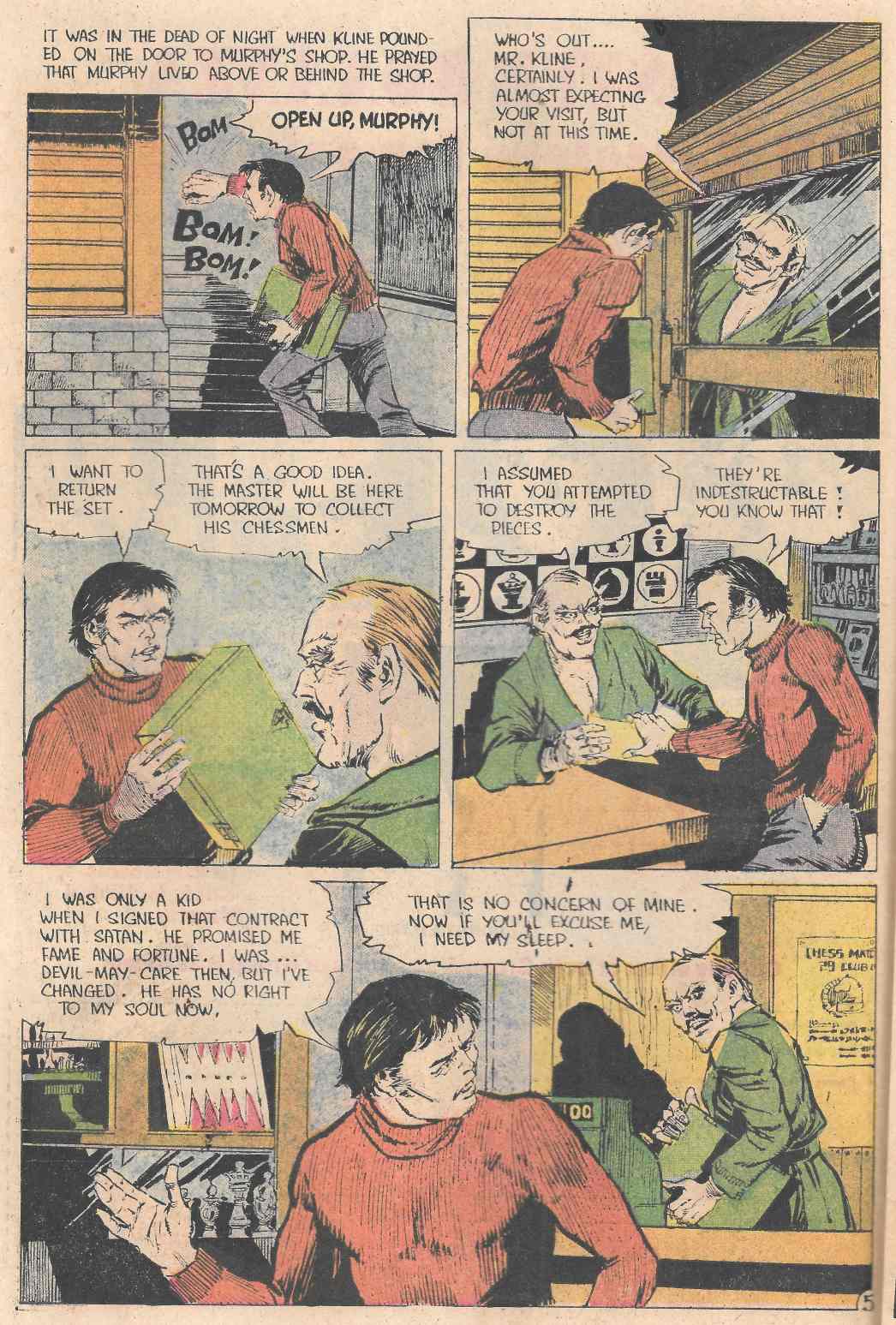 Unfortunately for Murphy, he underestimated Kline, who used his sculpting skills to replace the piece in the set with his features with a piece whit Murphy’s. Which means with the devil comes to collect, the shopkeep’s life is the one he takes. 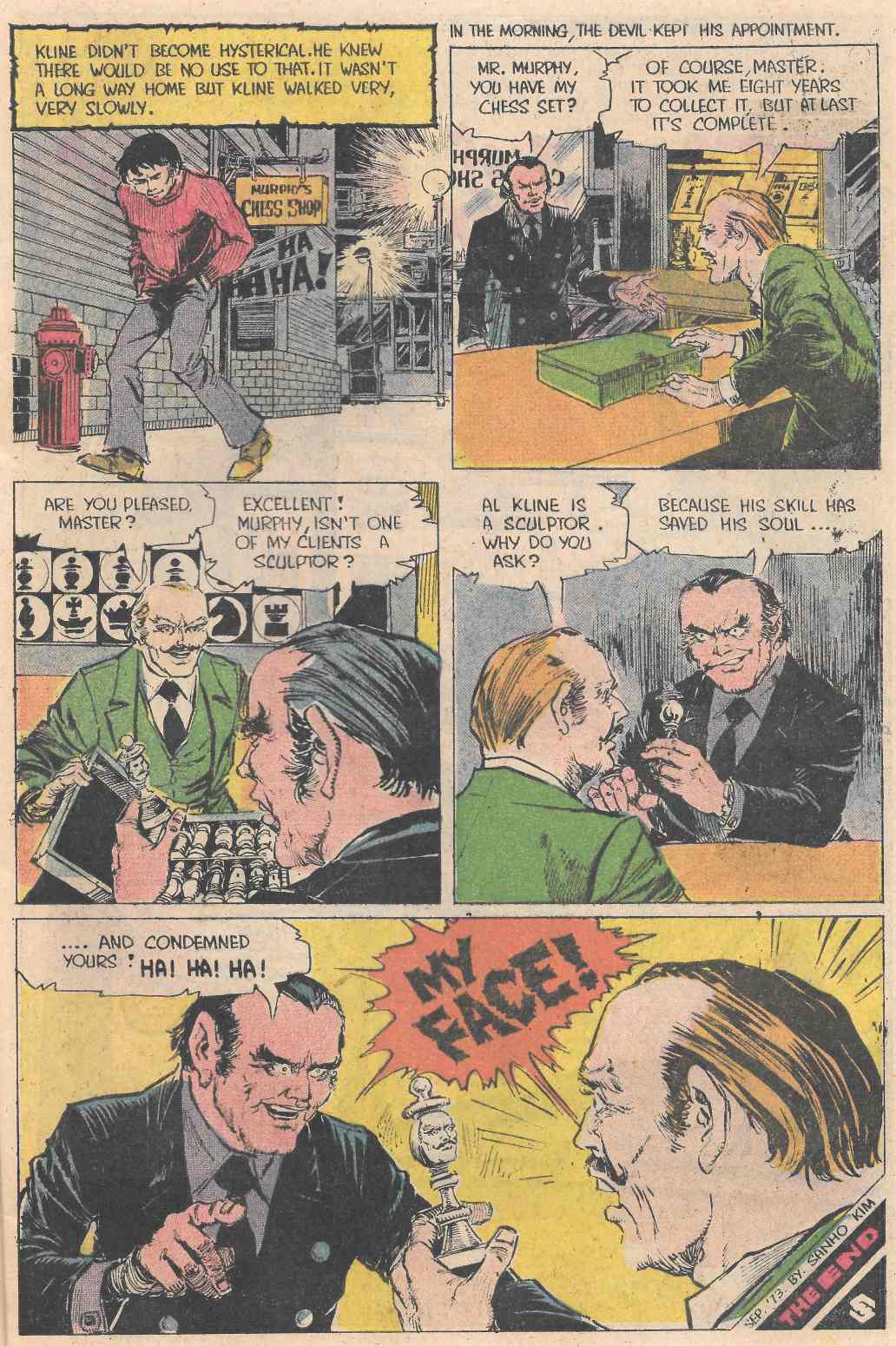 Nice bit with a neat twist at the end.

"Death of the Party”

This next one also works out nicely. A couple visits haunted Grimwald Mansion so the male, Roland Parks, can finish writing his scary novel. 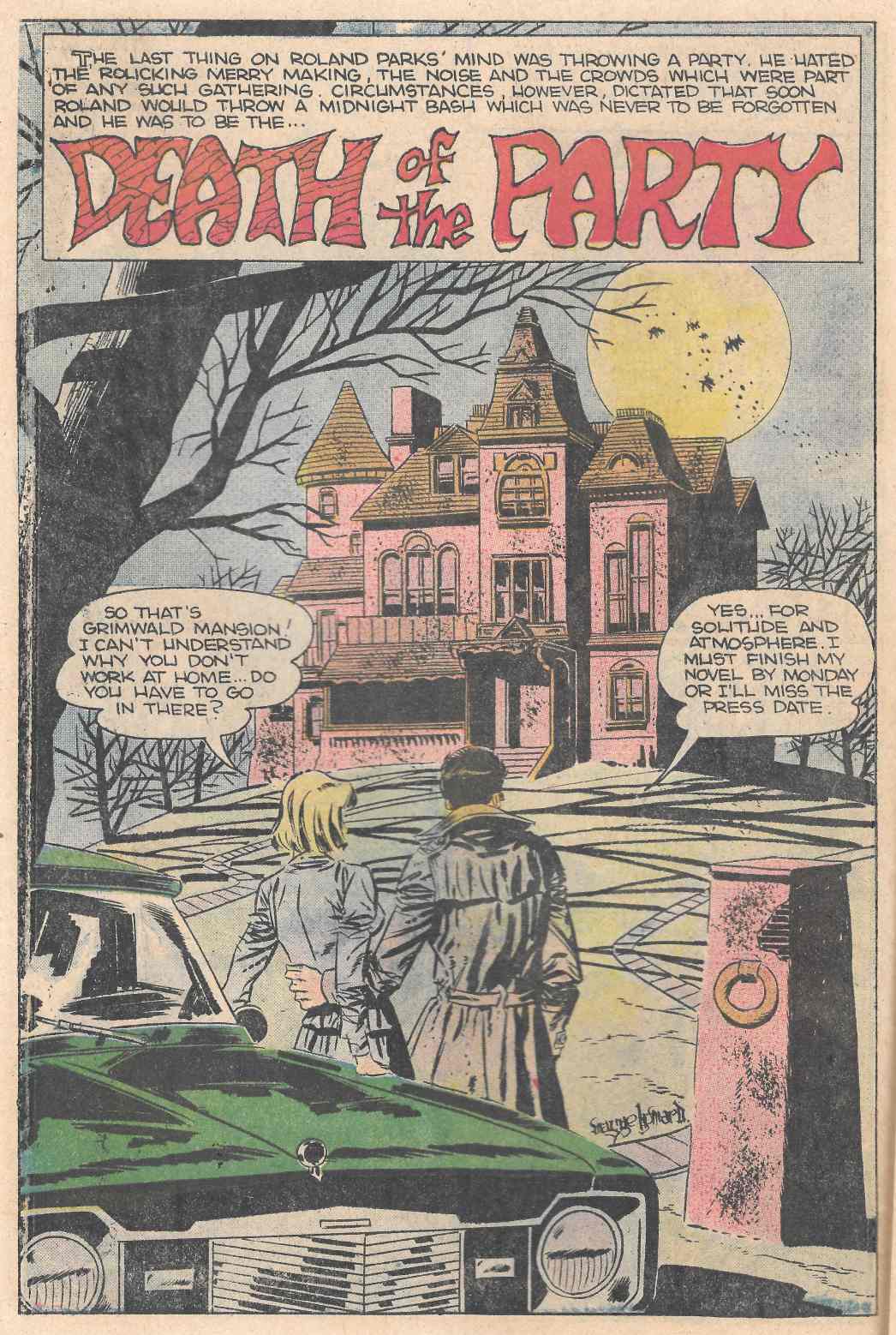 Well, visit is the wrong term, as the woman more or less drops the guy off there. Grimwald is in rough shape, which works out all the better for the man. He sets right to work. Unfortunately, something makes an odd sound which disturbs him. 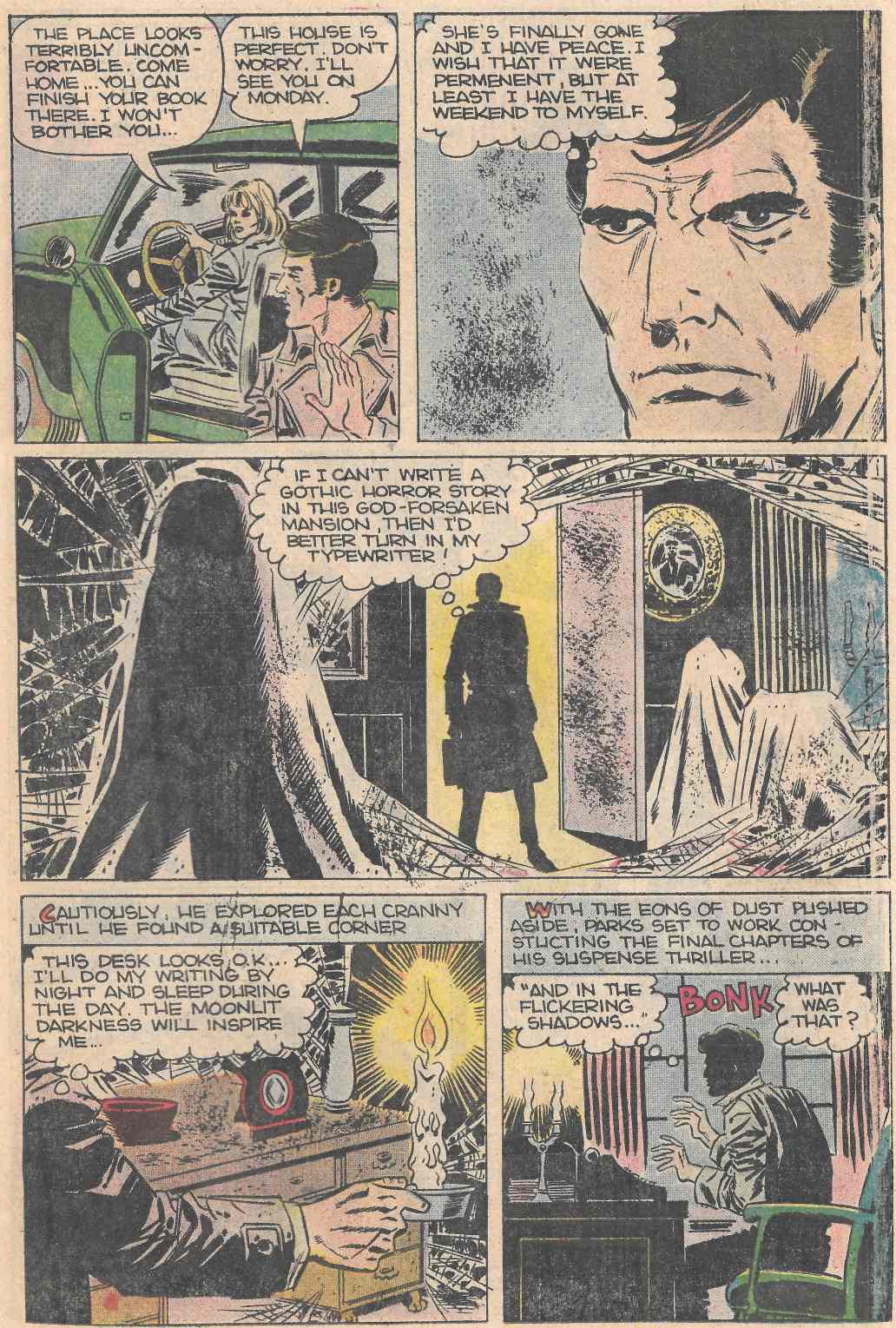 So he wanders the mansion using an old fashioned candelabra for light. What he discovers in the basement is an empty casket. 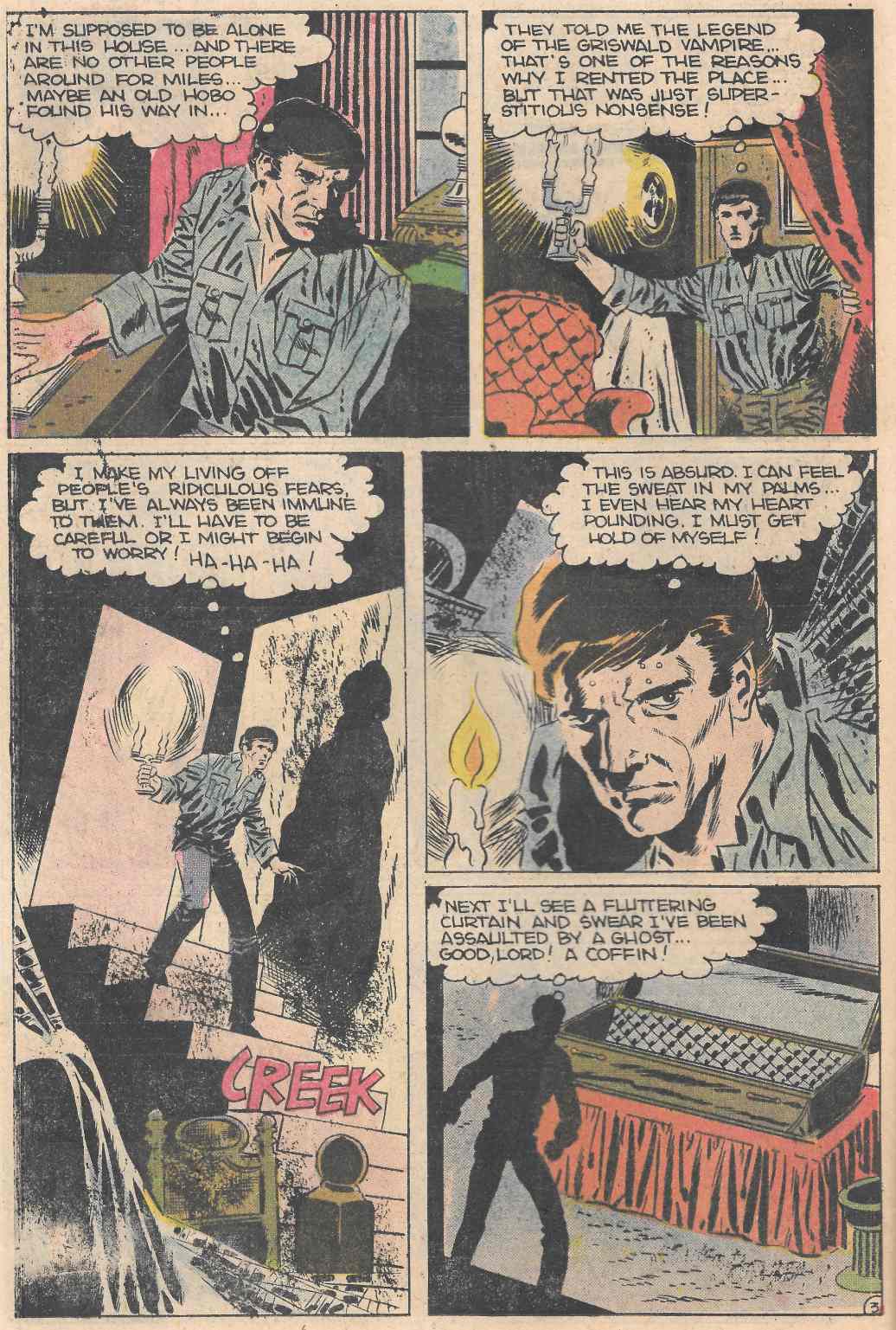 A coffin that belongs to the Lady Vanessa Grimwald…or better known as the Grimwald Vampire. And it looks like she’s blocking the stairs. She appears to know our writer Parks, and would spare him, but she needs his blood. Parks, being shrewd, strikes a deal that will save his own life at the price of others. 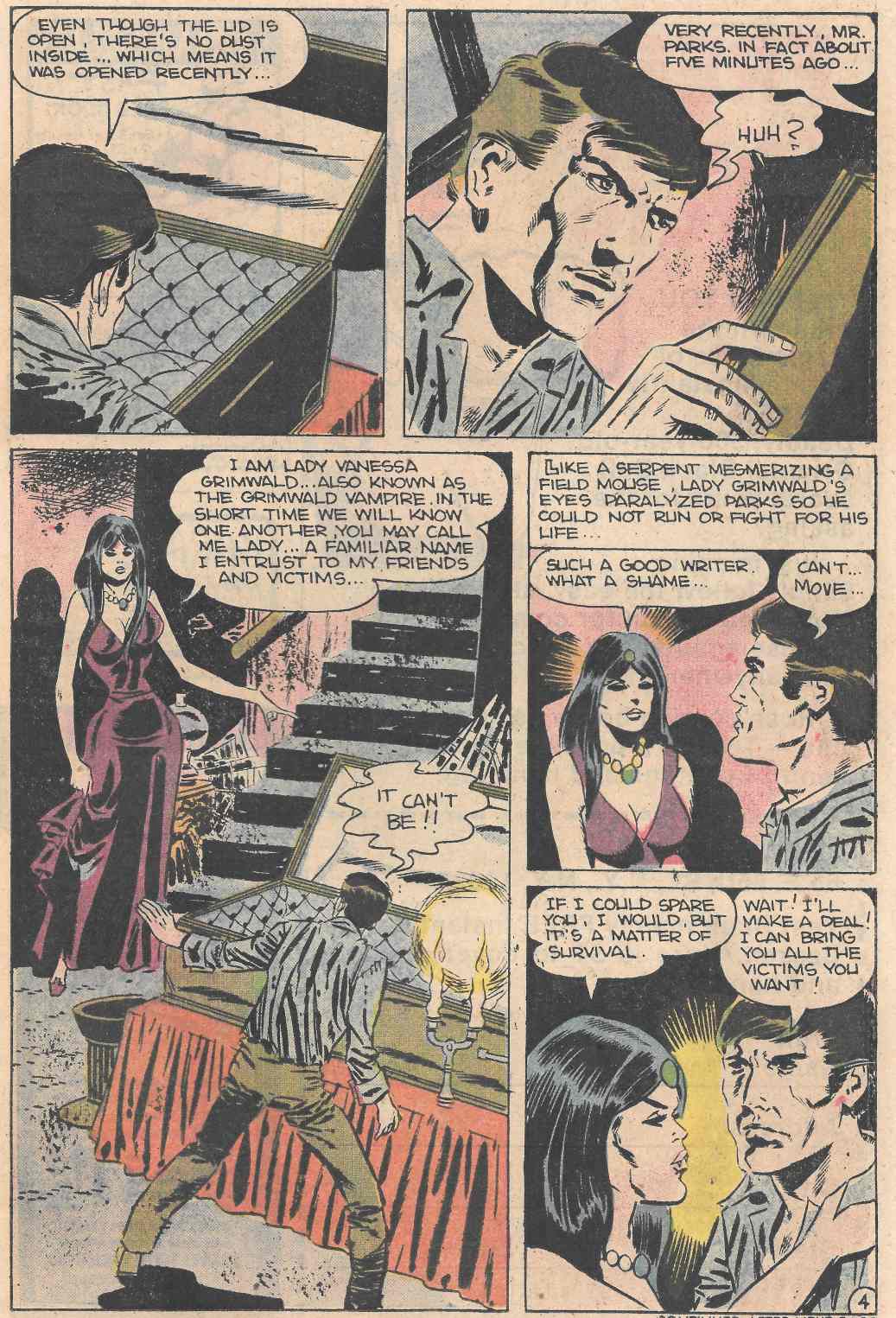 Parks will host a party at the Grimwald Mansion, bringing in thirteen victims for Lady Vanessa. And that number is non-negotiable. They set to the task of cleaning the place up and sending out invites to some of Parks’ worst enemies. 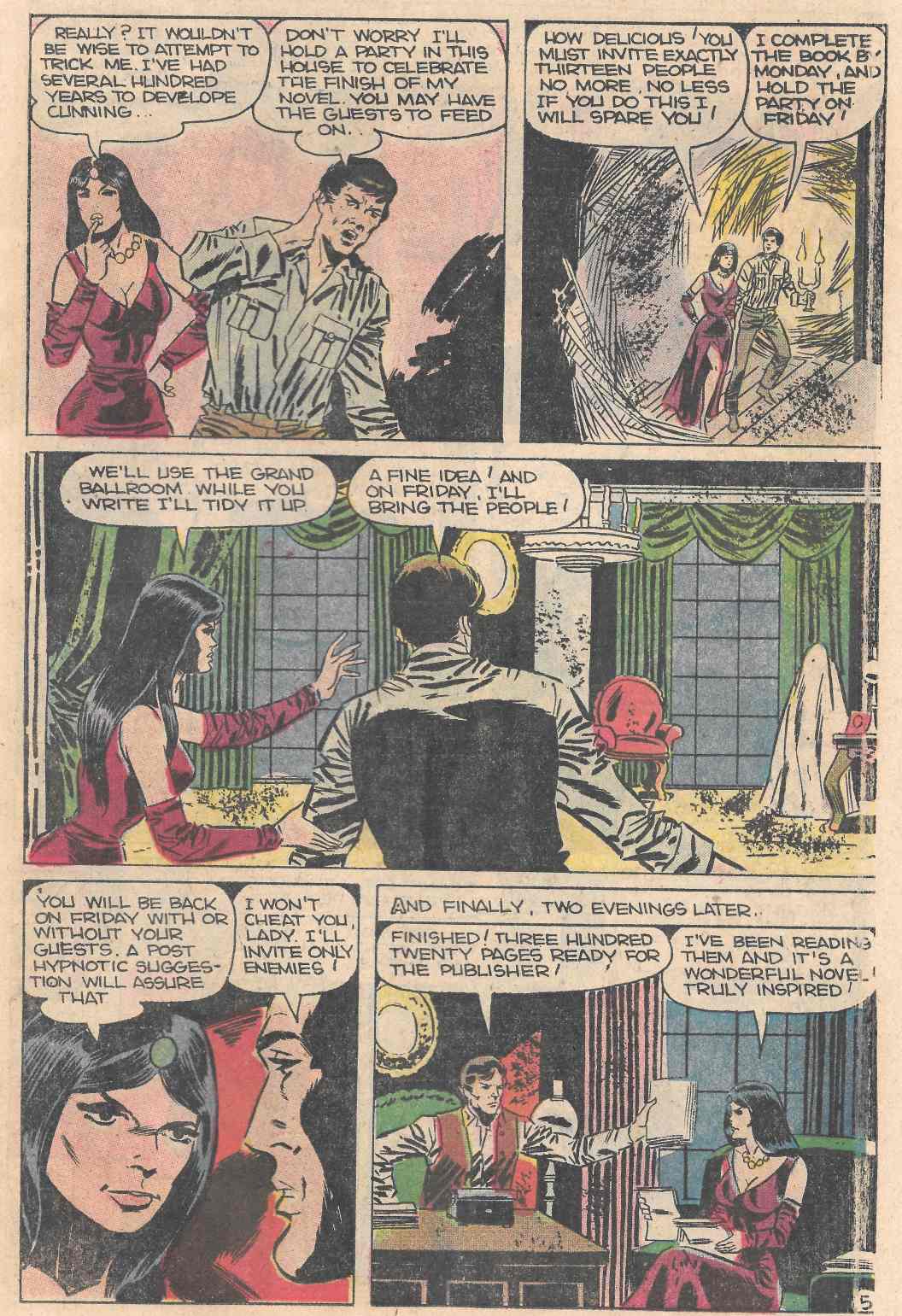 The sad part is Parks has decided to invite his own wife since she is so critical of his work (and possibly because she didn’t spend the weekend in the haunted, vampire infested mansion with him), leaving him a widower. This cunning ruthlessness endears Vanessa to him and she vows to make Roland Parks hers. 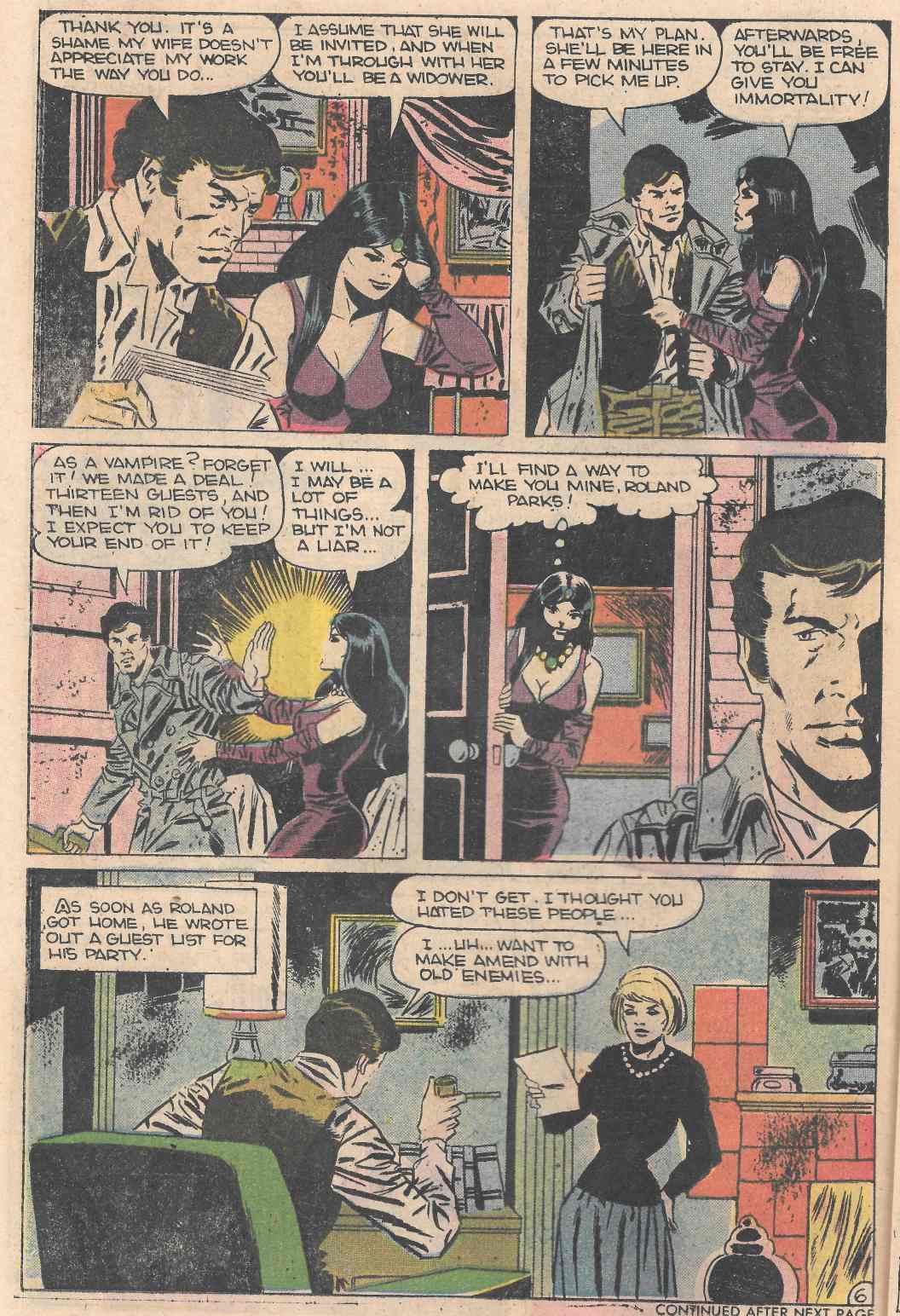 Parks even has to do a bit persuading to get her to attend. And, of course, he makes it formal so everyone will be dressed nice after they are dead. 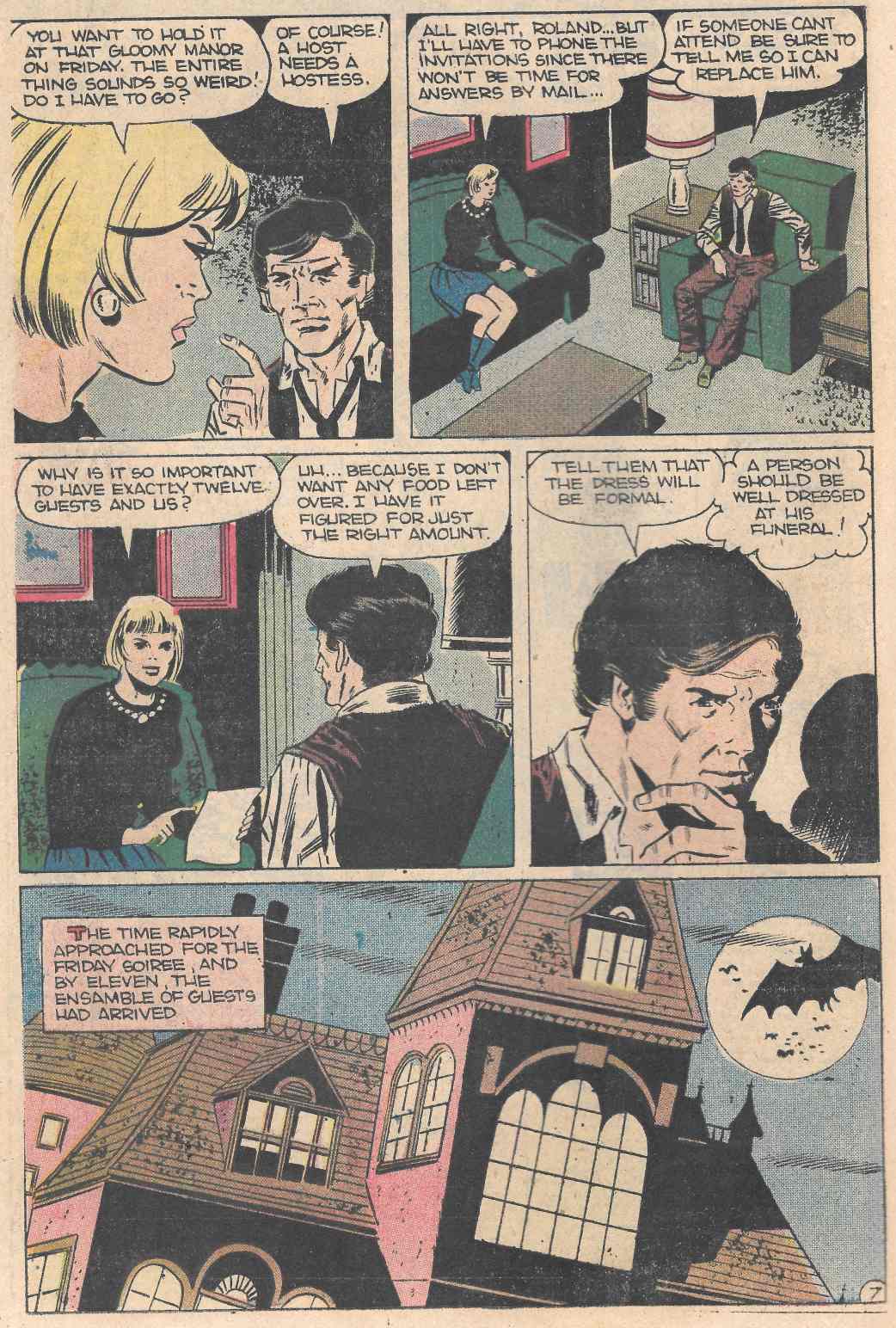 The night of the party arrives and Vanessa has lived up to her part of the bargain. The house is immaculate. Even wife Helen mentions it. Roland appears a bit concerned that someone might have made a last-minute cancellation. If he was really concerned, he could have just invited 26 people and assumed half of them wouldn’t show. 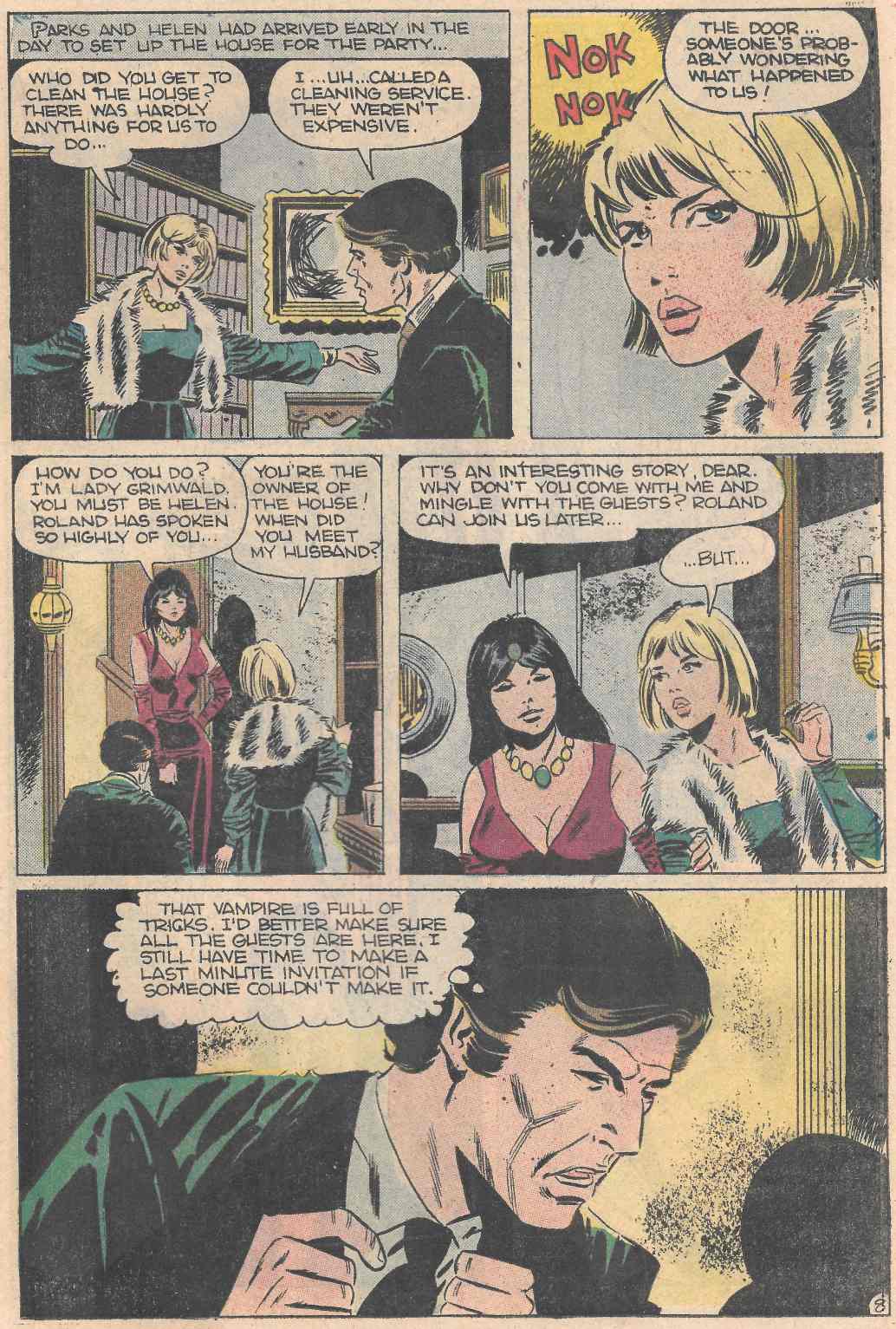 But whatever. Roland checks around and finds that everyone is there. Even this pair of identical twin authors who are rivals of his. With everything going so well, Roland relaxes and starts to mingle. 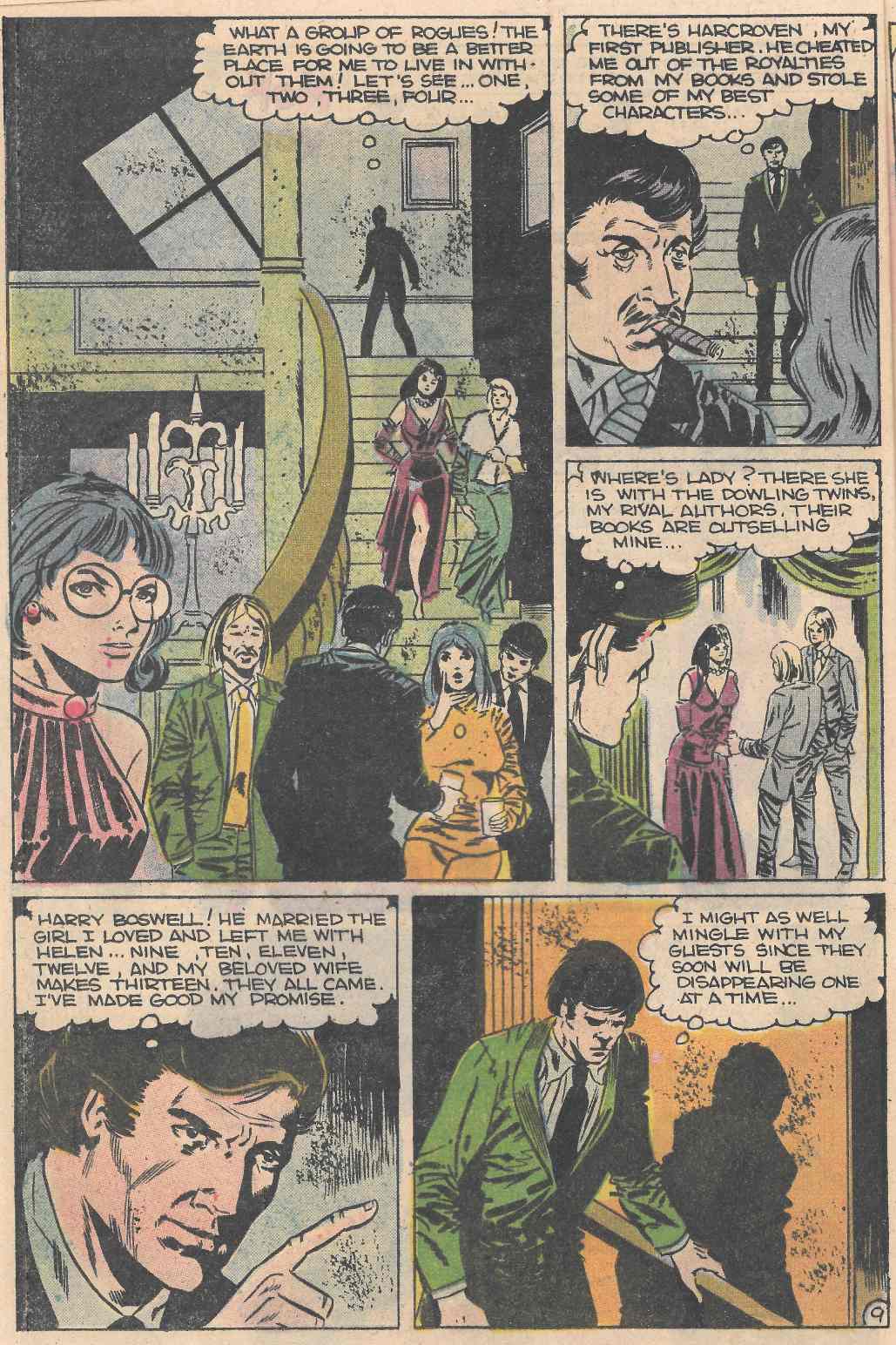 Until he bumps into one of the twins and learns that his brother ISN’T at the part, but is home finishing a book. Roland is stunned and in danger. He rushes to where he saw the two together only to be greeted by a floor to ceiling mirror, spotless due to Vanessa’s cleaning. 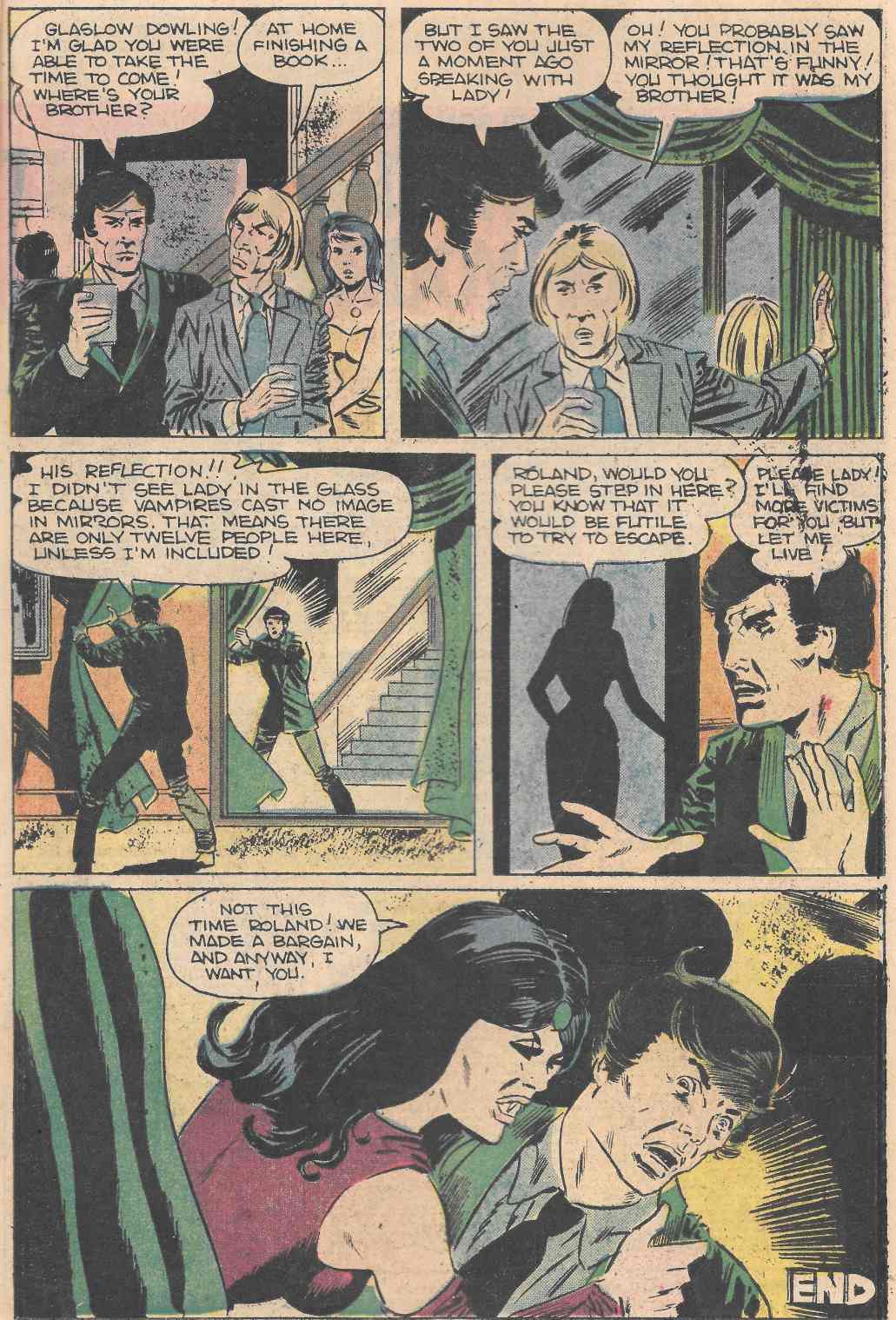 And given that he’s one victim shy, the Lady decides she will clean up her winnings.

On to the prize event, a story reprinted from an earlier magazine and one of the best short horror stories around. Don’t take my word for it, the story made it into 2008’s Mammoth Book of Best Horror Comics. Strange that a horror story from 1974 would win that honor? You won’t be so skeptical once you read it.

We begin with a flashforward from the end of the story. Avis Drood runs through the swamp searching for her husband as strange and malevolent creatures pop out at every turn. They bore no ill-will to her husband, but they seem actively intent upon doing her harm. And the reason for her husband’s absence is he is meeting with another woman out in the pea-soup fog. 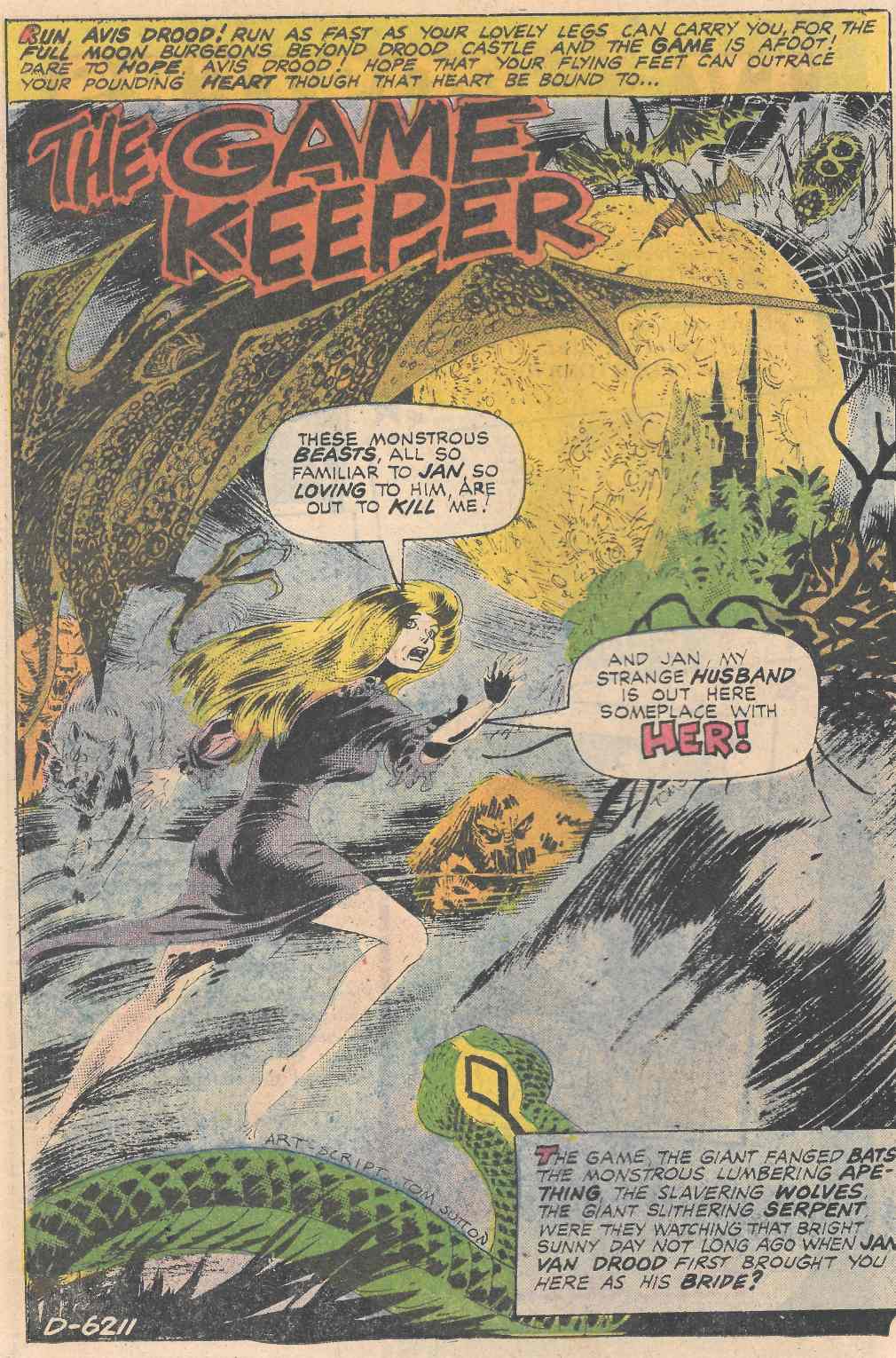 Fade back to the start of Avis’ marriage to Jan Van Drood, a man she madly loves comparing his spooky old castle to something out of a fair tale. Lady, that’s a castle right out of Bram Stoker’s Dracula. Even the assistant is an Igor. And Salic lets it be known that there is only one Mistress of the castle and she is “neither young nor beautiful.” 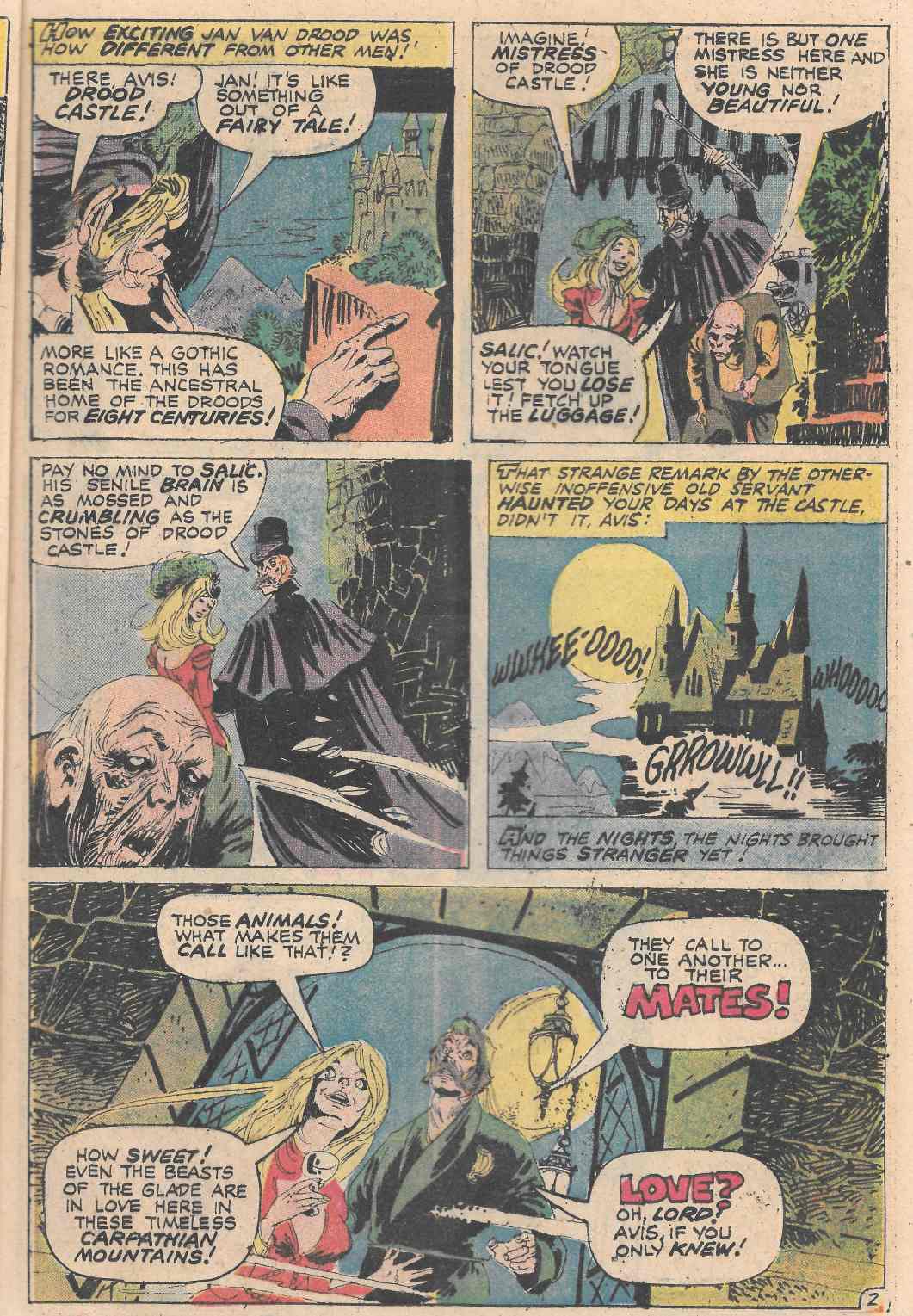 There is even this creepy bit where they listen to the sounds of the creatures on the moor calling to their mates. Avis calls the sounds love and Jan mentions she is being naïve.

Jan tells Avis to never leave the castle after dark. He can because he is “A Drood!” and that the creatures on the moor know him. When suddenly Salic comes in accompanied by an odd insect like chittering. He says that SHE is the reason for his interruption. Jan wastes no time in leaving for a night out on the moors alone. 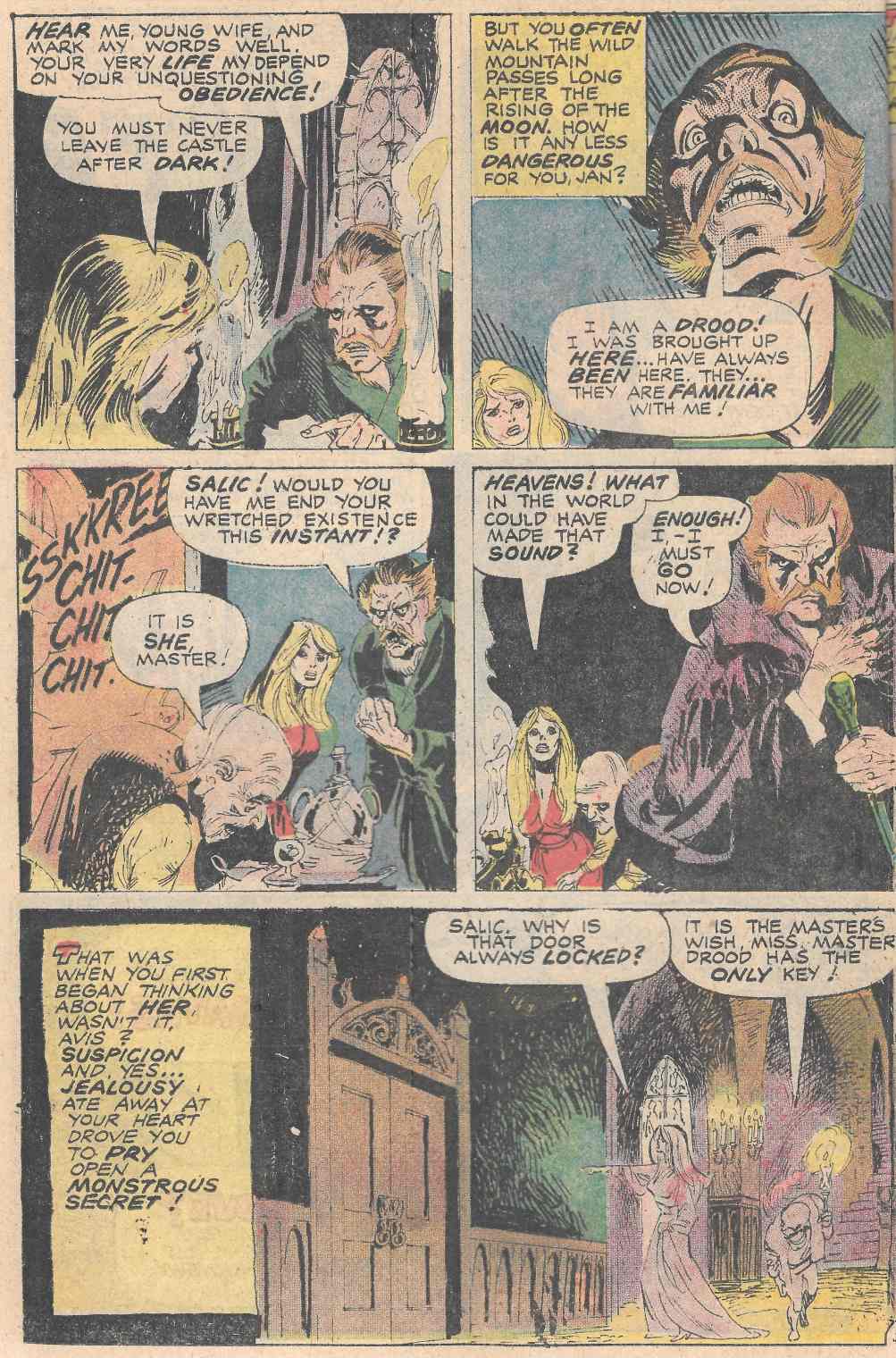 While he is away, Jan explores the castle driven by an jealous curiosity. Even beyond locked doors not meant to be opened.

She becomes so headstrong that she steals the keys the next morning, discovering behind the locked door a hallway full of paintings of the line of Drood. Each head of the house is pictures surround by one type of savage beasts, as if they shared some secret with these mysterious animals. 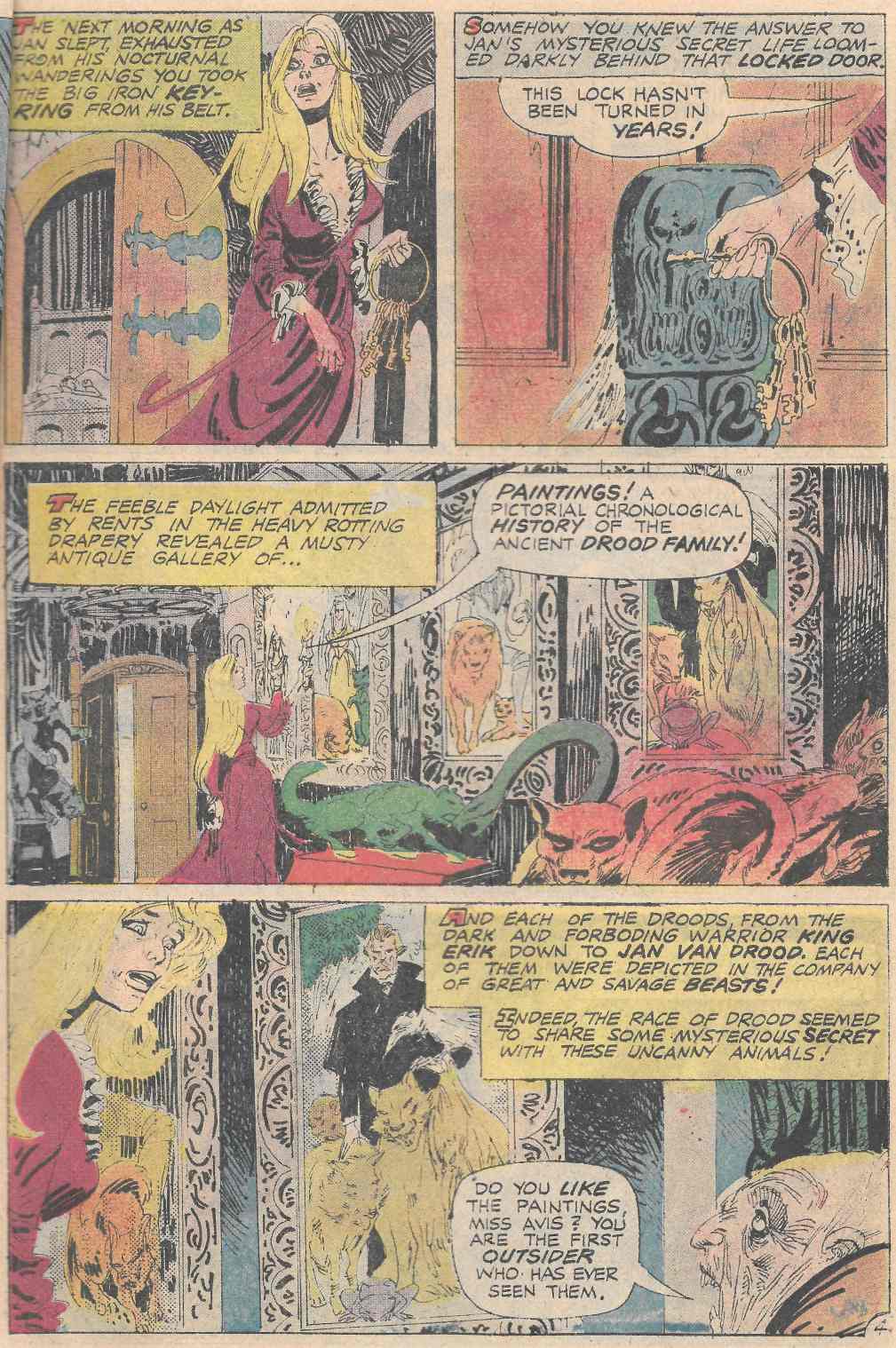 Salic comes upon her and startles her. He calls her an outsider, the first to have ever seen the paintings. 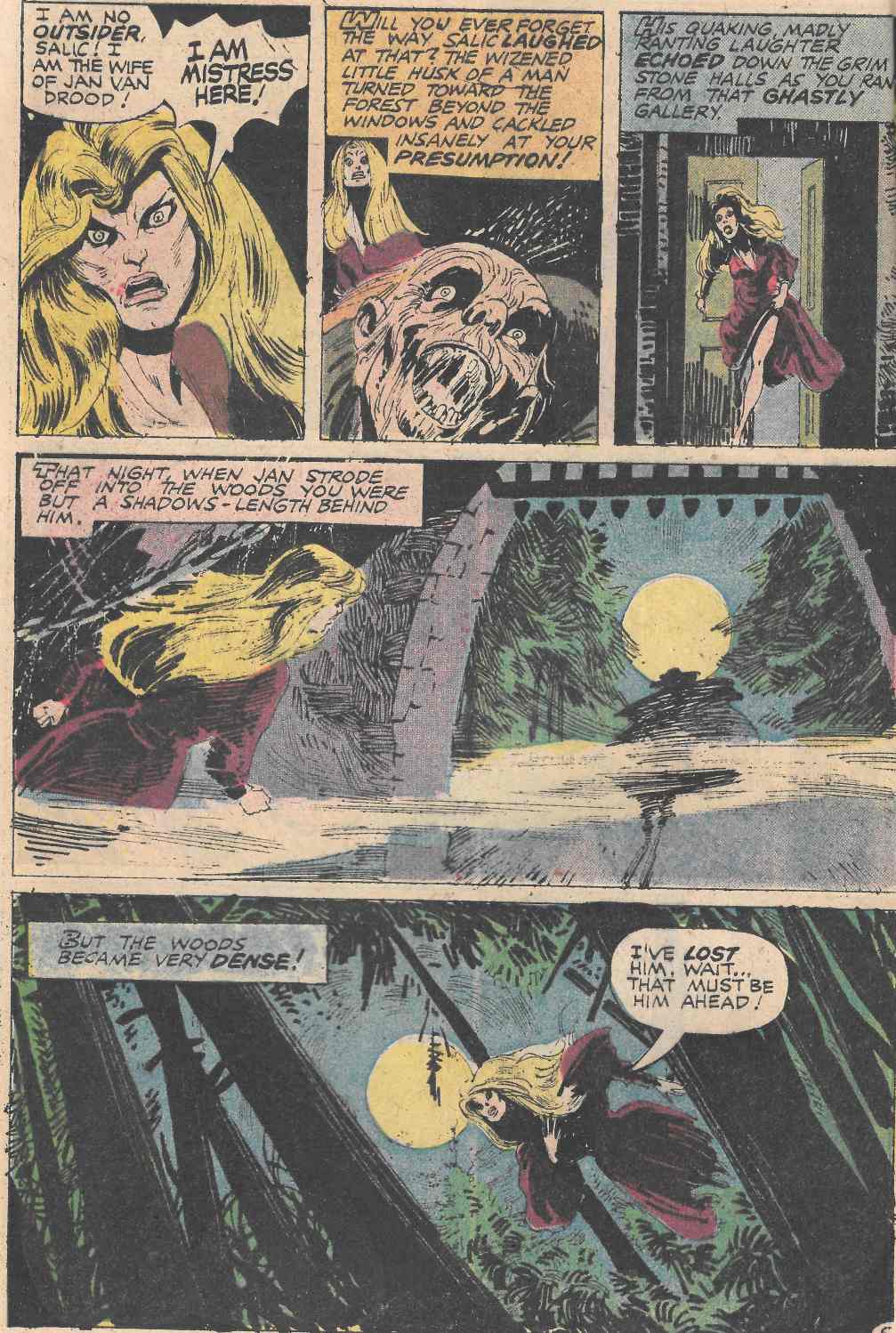 Feeling a bit upset, Avis asserts herself as Mistress of the castle to which Salic laughs. Thus driven, Avis follows Jan that evening on his nightly stroll.

It is a journey fraught with peril as creatures hem her in from every side, driving her forward. 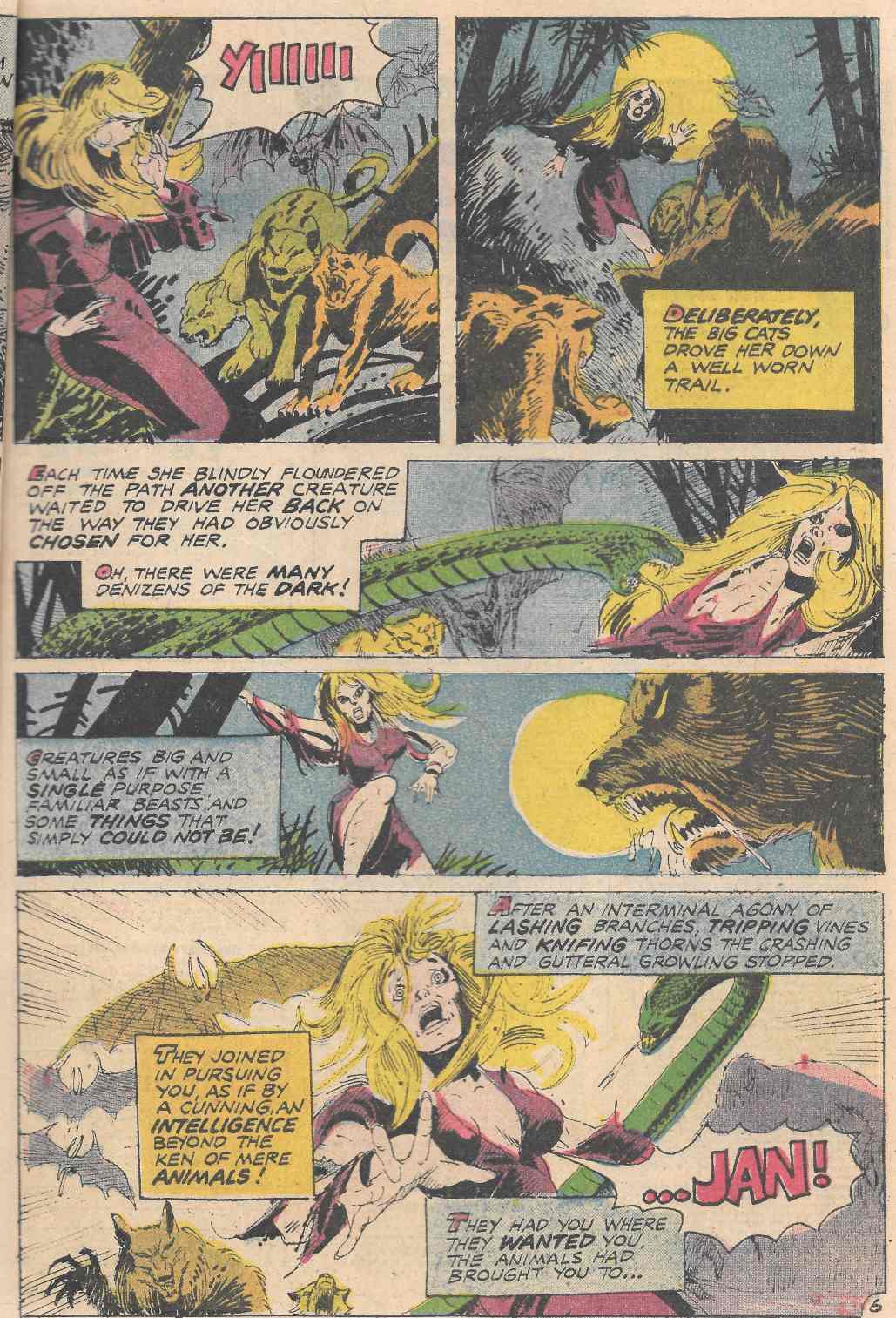 Until at last she comes upon her husband… 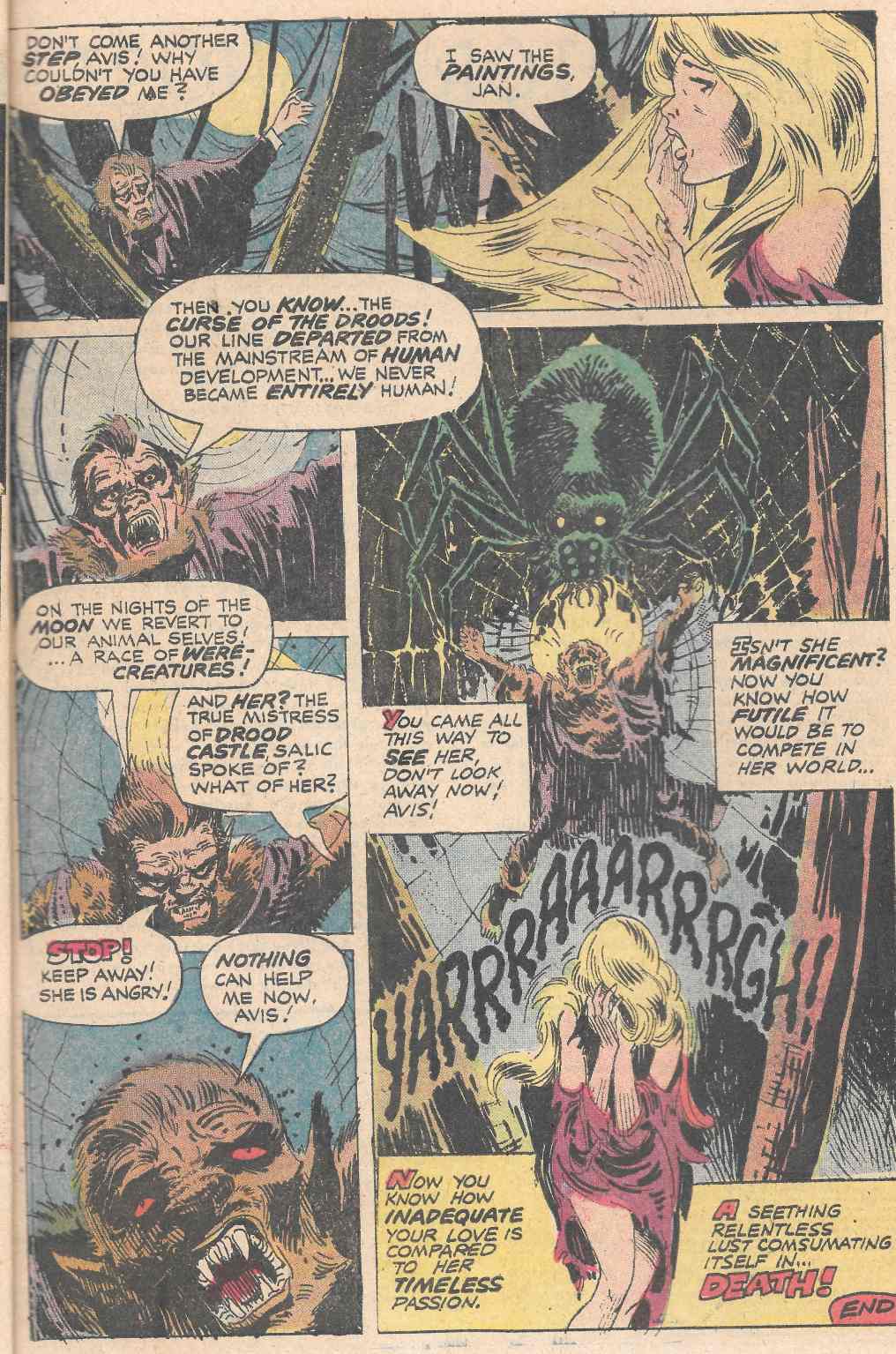 …he is bound up in webs and transforming into a beast. For this is his curse, the curse of the Droods and this is his Mistress, a giant spider. And with that Jan is consumed by the Mistress for daring to bring a mortal so near. And Avis? What of her fate? It is left for the reader to infer.

Great book, made all the greater for the final Sutton tale. Snatch these up if you come across them.

Posted by SonOfCthulhu at 4:33 PM