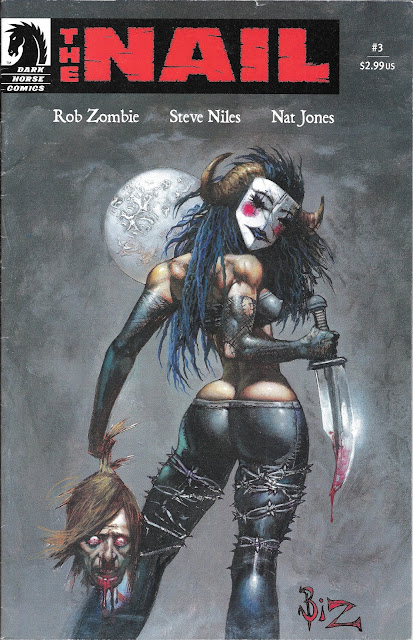 For every well done survival horror story, there are usually a couple-odd fistfuls of ones where things never elevate to actual horror. And when you look at the writers of this book, you find artier Rob Zombie sharing creative control with the firmer hand of Steve Niles. That first name doesn’t give me a lot of confidence right there.

I’ve started The House of 1,000 Corpses no less than three times only to turn it off after the first 30 minutes. I hear good things about The Devil’s Rejects, but I’ll never start that one given my feelings about Ho1kC. The tone of Zombie’s first horror movie is all over the place and I just can’t invest in watching the leads get led from scene to scene only to get killed off in “creative” ways while then interspersed with video of Zombie’s very attractive wife dancing seductively while blood spurts on the camera. It’s…the opposite of subtle.

I haven’t seen either of his Halloweens, either. Not certain why anyone would try to remake the first one anyway. It’s a near perfect movie that doesn’t need any additional backstory or gore. Both of which appear to be staples of Zombie’s horror endeavors.

Now saying all this might mean that Zombie shows up at my house, punches me in the face and takes back all my White Zombie CDs (of which there are several here, Rob. Several!). But maybe this review will set things a little more to right.

Because The Nail surprises me in a GOOD way.

Sure, it is nothing more than a violent, bloody survival-horror tale of a sub-pro wrestler and his extended family taking an RV across the country when they run afowl of some demon-worshiping, “Hills Have Eyes” garbed bikers, who want to sacrifice the lot of them to their local legend. BUT it works. It has got gore, but it is used well in the story, not as an end unto itself. The art is clear and clean and evokes just the right mix of realism and “out-there” vibes. Also, between Niles and Zombie we get a good plot going that is understandable and has us rooting for people to make it, not waiting to see which one gets offed in an interesting way next.

I’m genuinely saddened that I have to start at issue 3, because I’d love to read this from start to finish…and there are only four issues of this mini, which feels adequate to tell this particular tale.

We begin with the scene from the beginning of Evil Dead 2 where we find out the bridge is out. 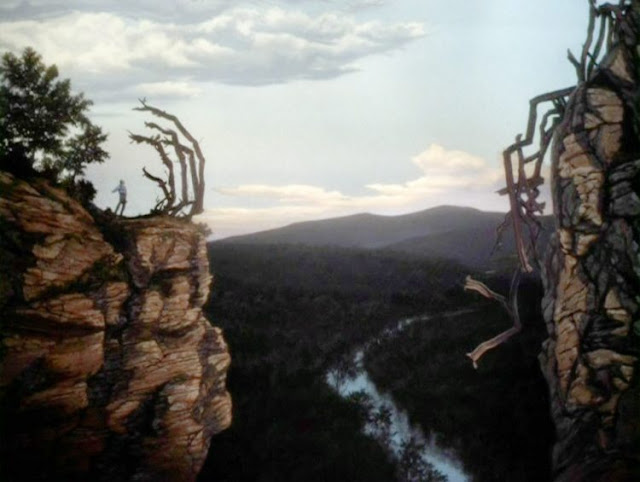 Okay, it’s NOT that, but it is pretty close. 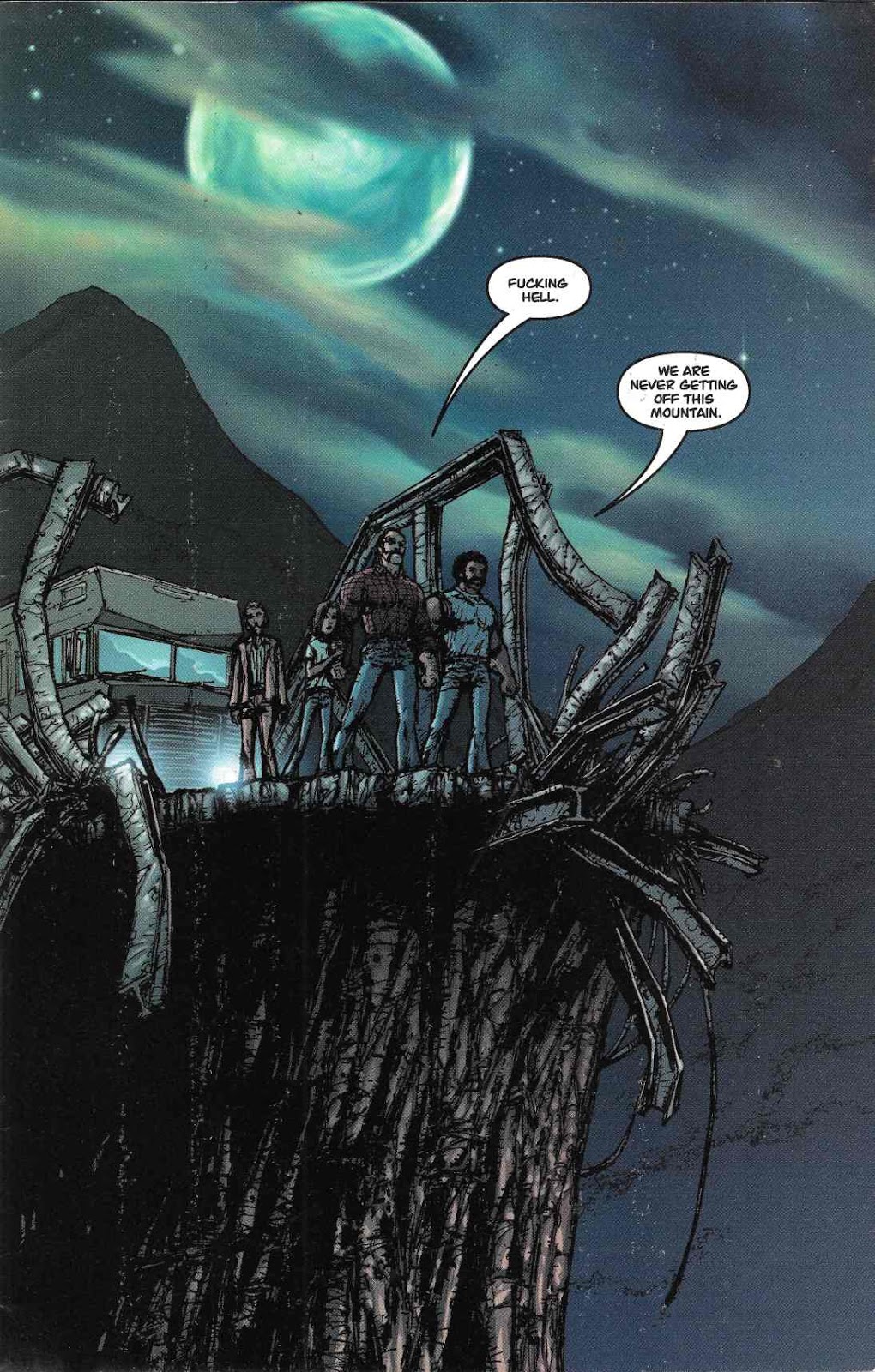 We find that the biker gang has blown up the bridge, cutting off all the escape routes. The only way out is past the gang themselves. The primary female protagonist (wife, I assume) has been injured and our two wrestlers are trying to get her to a hospital. 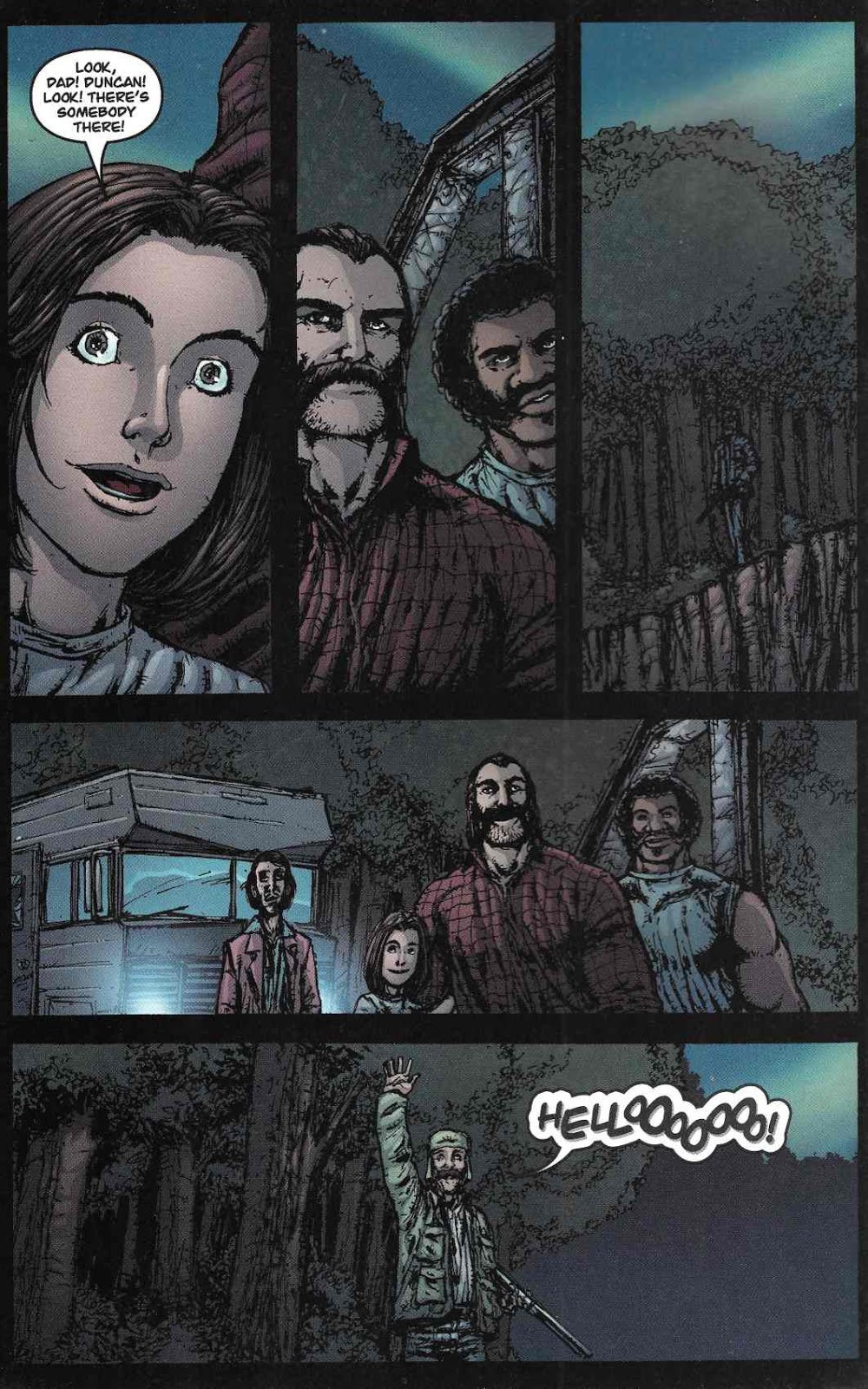 They see a hunter across the gap and realize there is a chance at getting a message out to authorities who might come to their aid.

He shouts hello and Rex “The Nail” Hauser answers with a hello back. Then they get into the nitty-gritty of the aid they require and the guy turns to head back to his truck and to town… 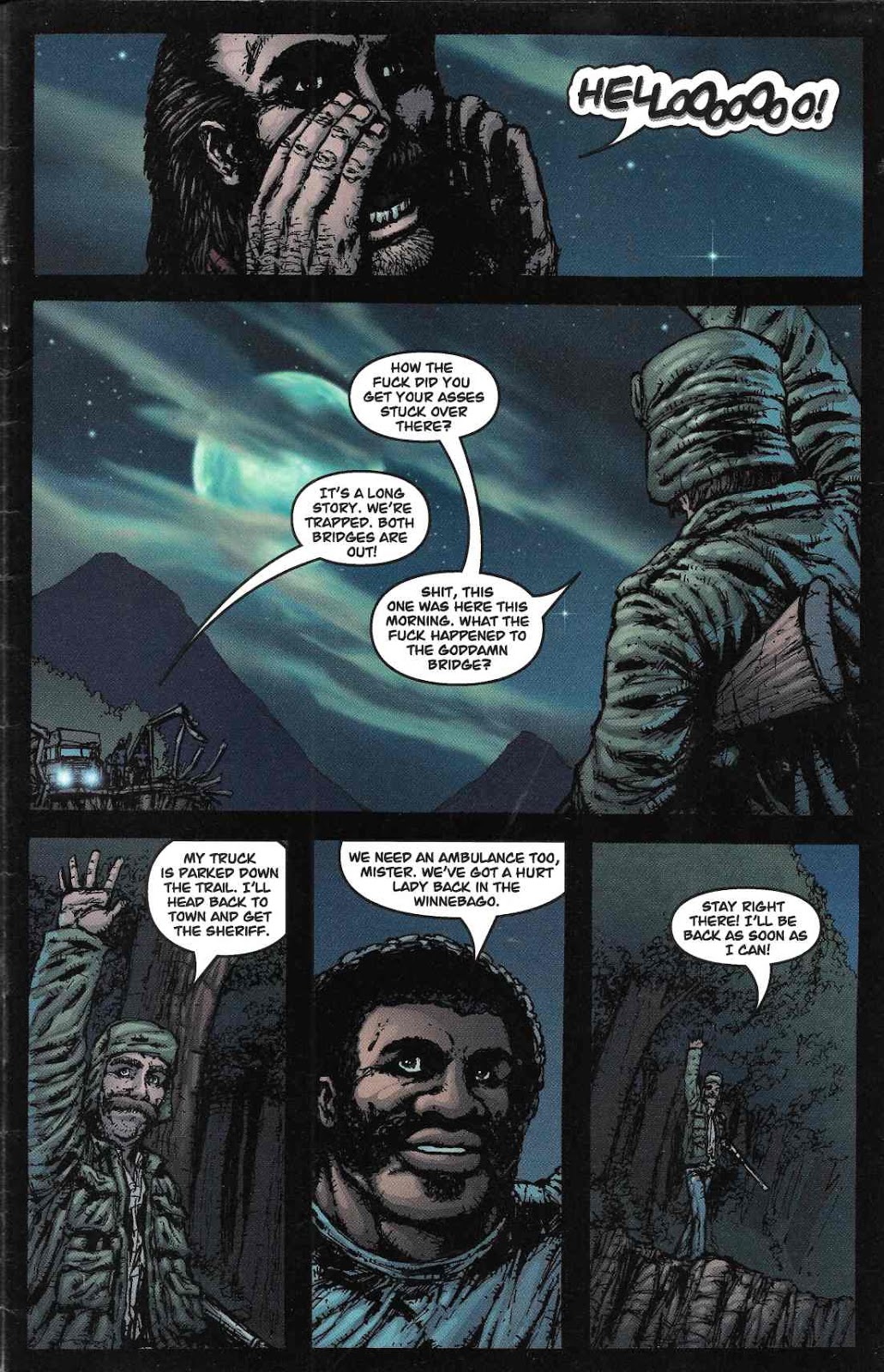 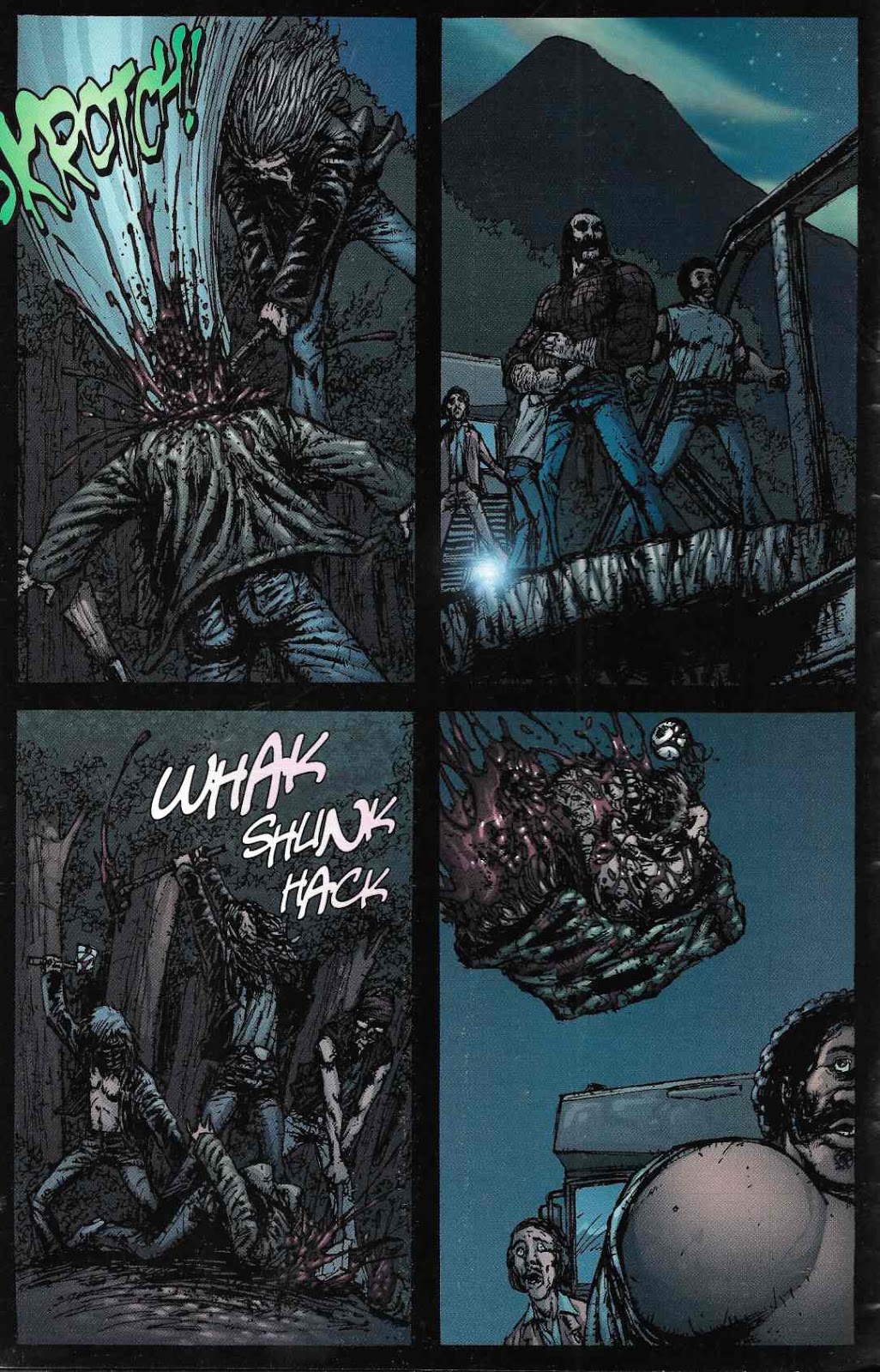 Yeah, he’s murdered to death by three of the crazed, mask-wearing biker psychos. They toss the hunter’s head over the gap to our heroes.
Rex decides to toss something back at them… 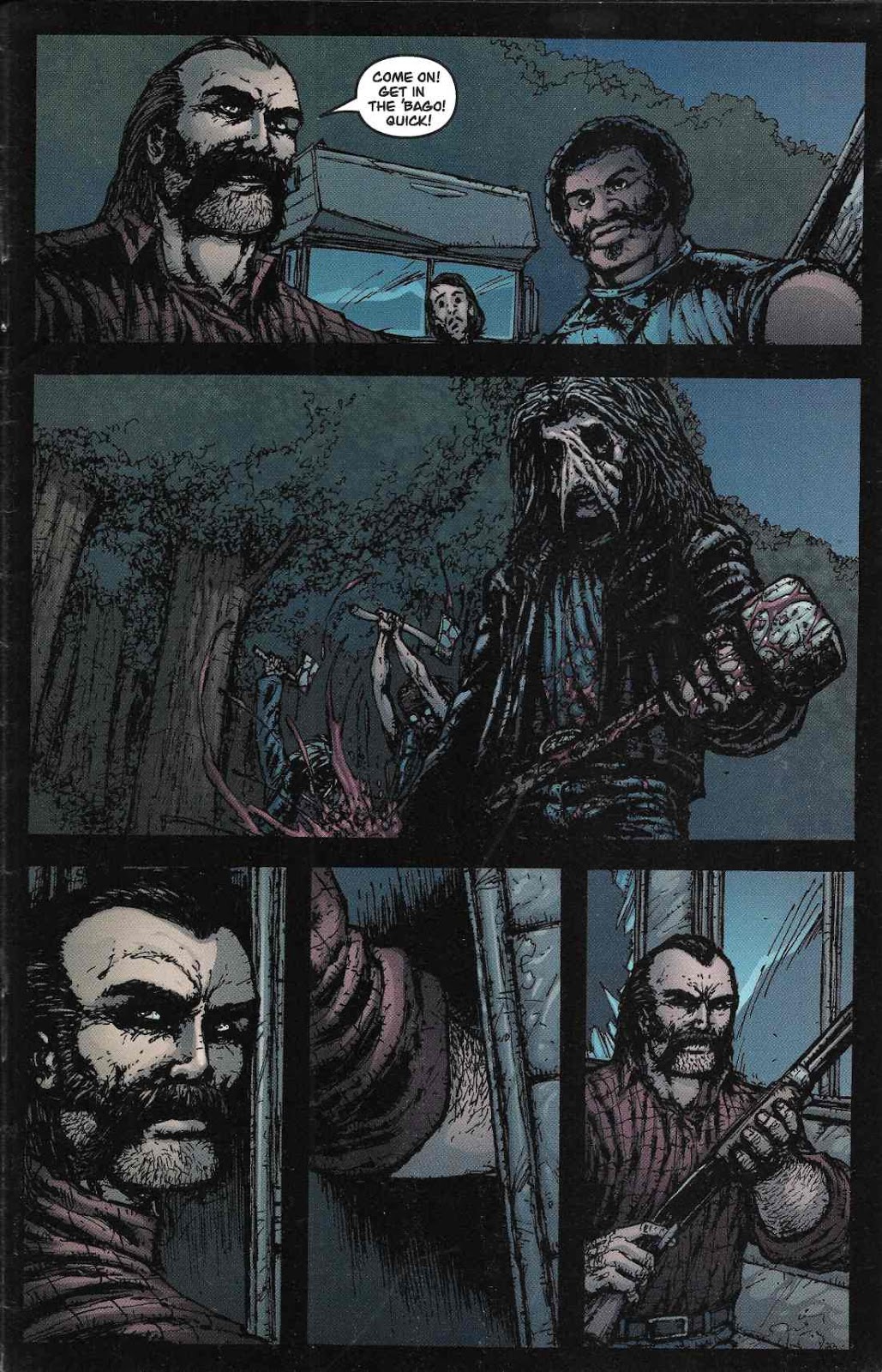 …and I begin to feel a certain affinity with Rex. 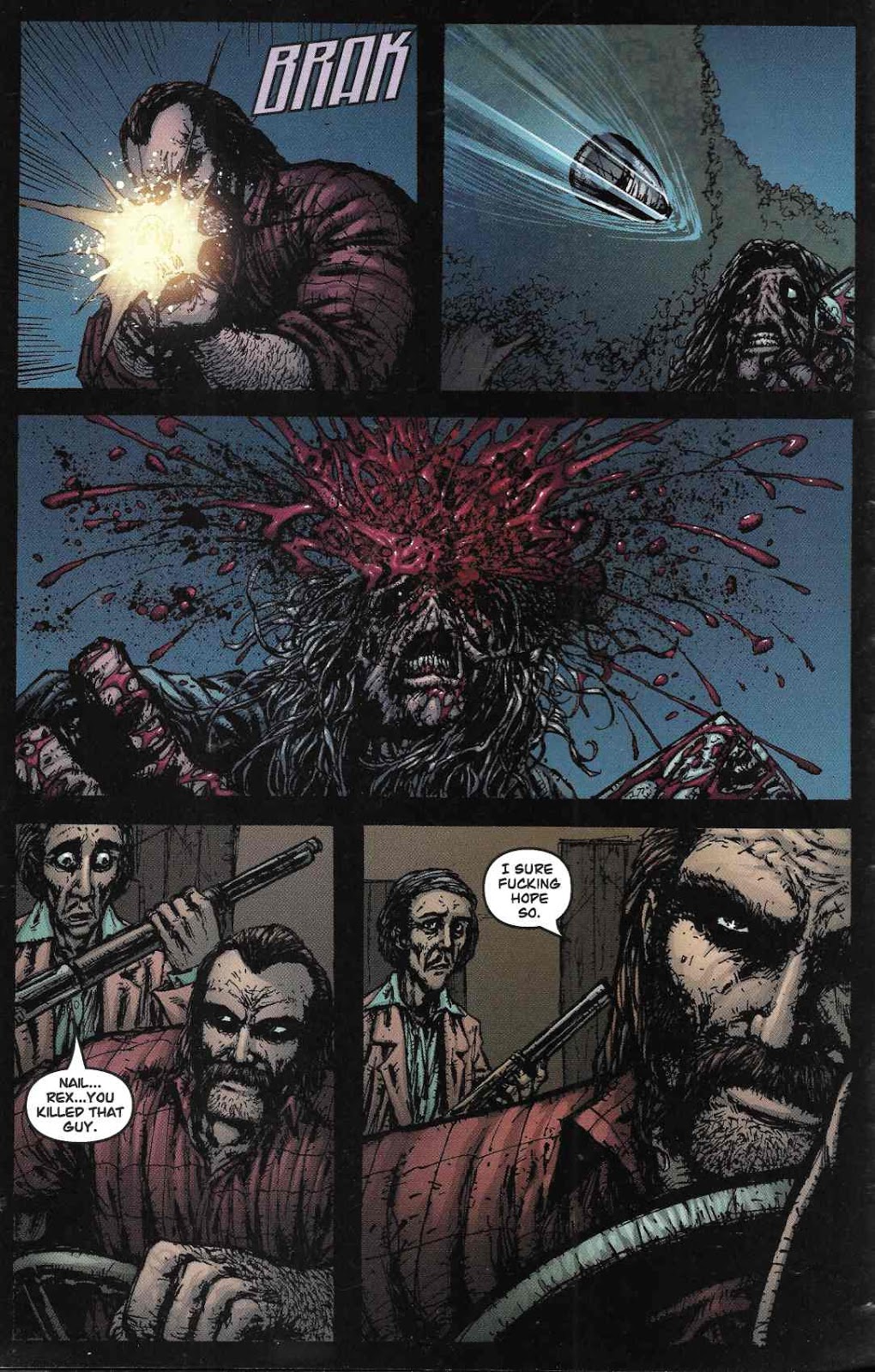 He’s a realist, too. Now that there are no easy options, Rex makes a sensible plan. Not one that will lead to their safety, but one that will give them a fighting chance to take a few of the jokers with them. 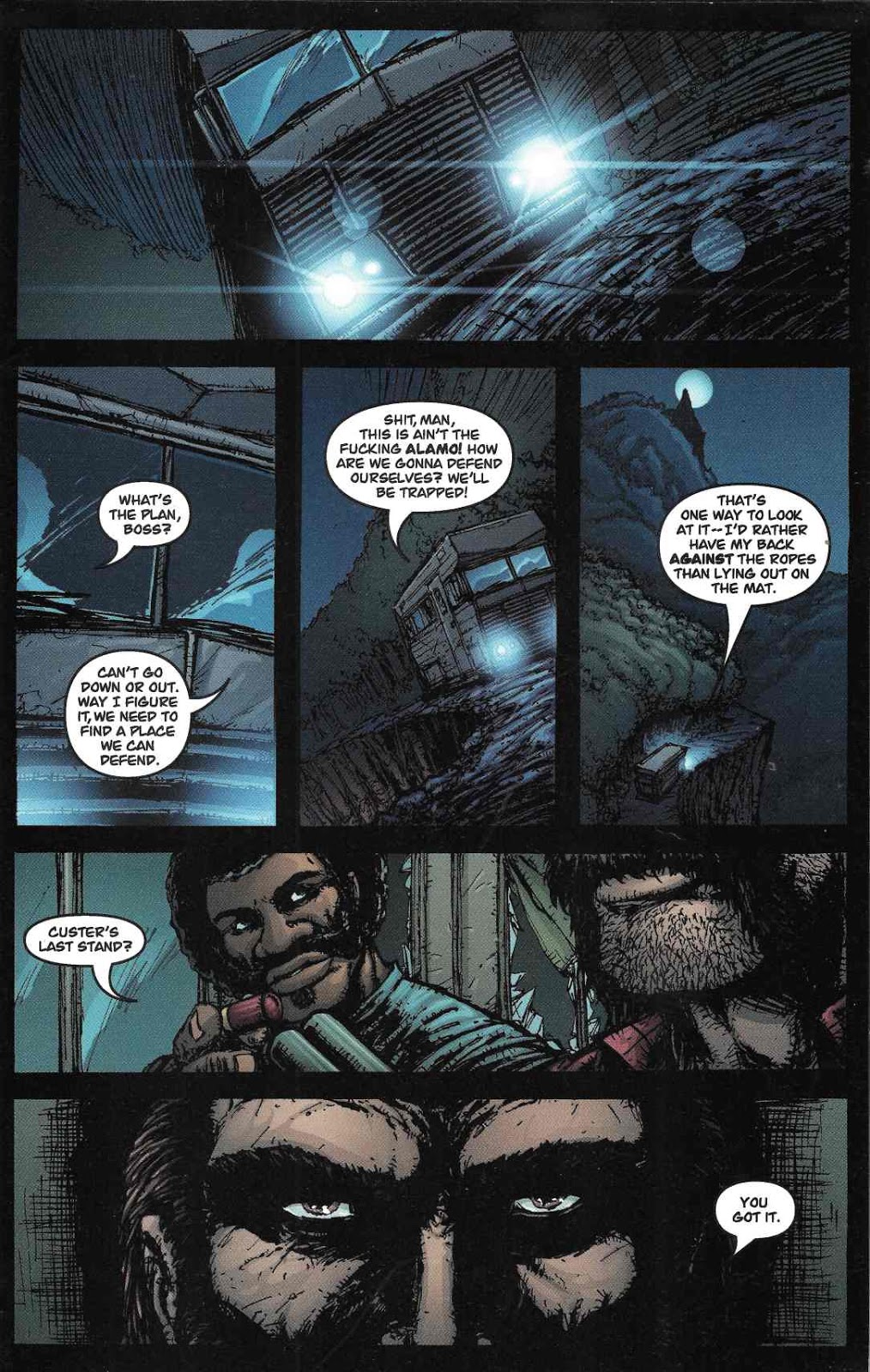 He’s decided to place them smack dab on top of that mini version of the Devil’s Tower. No better place for a “Close Encounter” with the biker cultists. 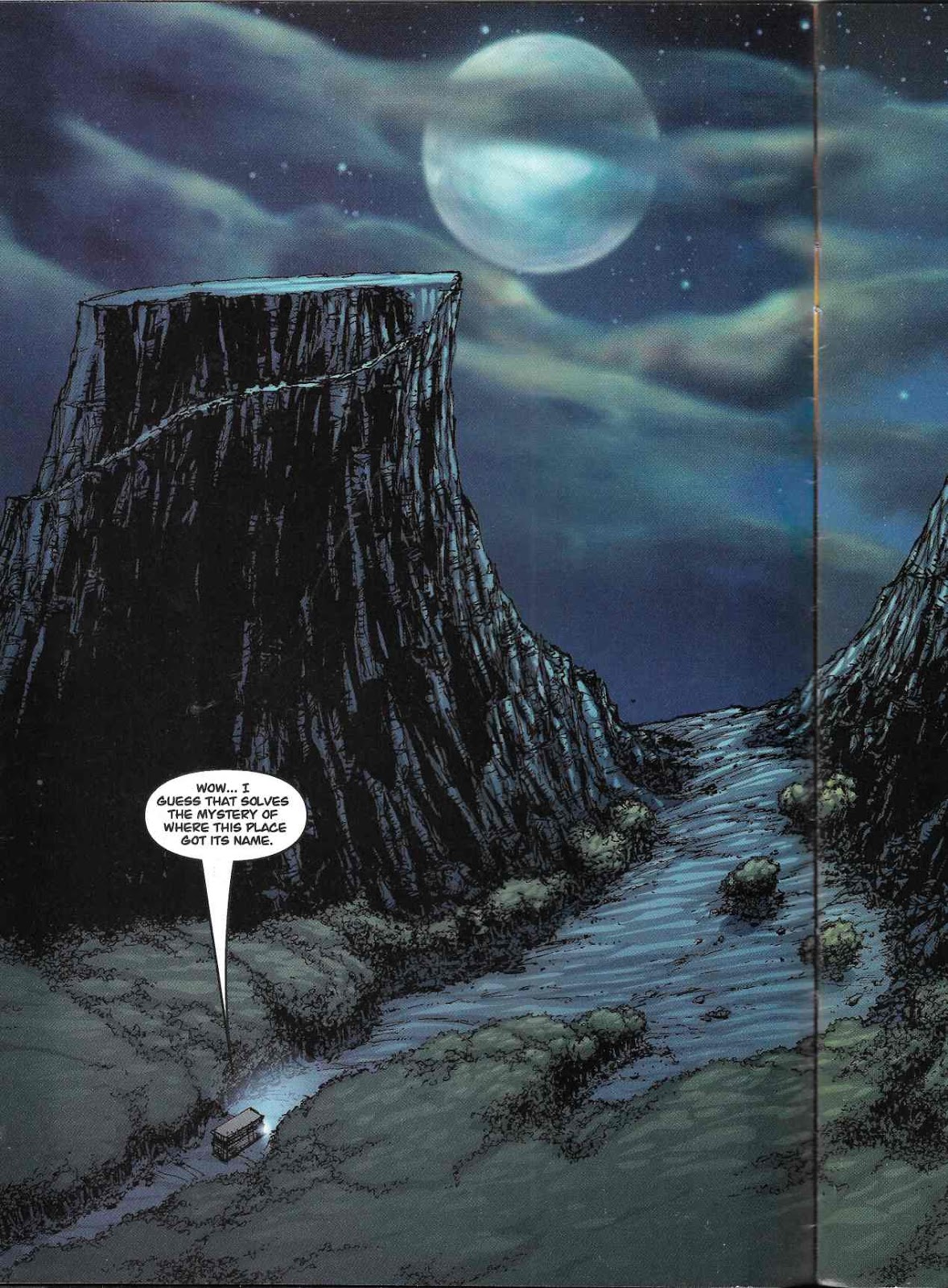 He even thinks ahead enough to setup some booby traps on the way up. Let’s see how this strategy works out. 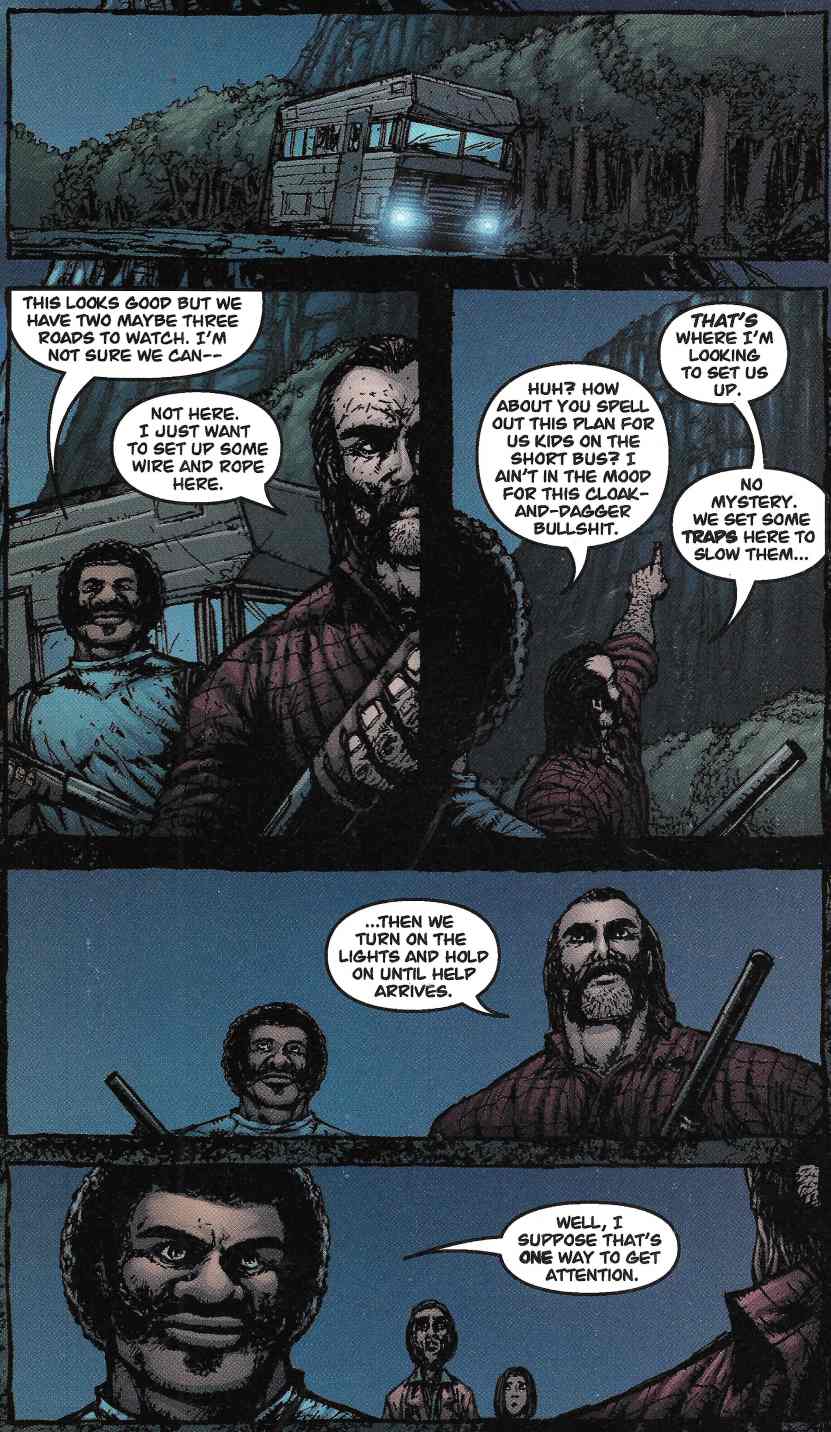 But before we do, there’s this little bit about WHY the bikers are after everyone and I DO like this part a bunch. It gives a reason for these guys to be murderous assholes AND why they won’t back down even when many of them get killed. Give your villains a rationale and I’ll up-score your dance card every single time. 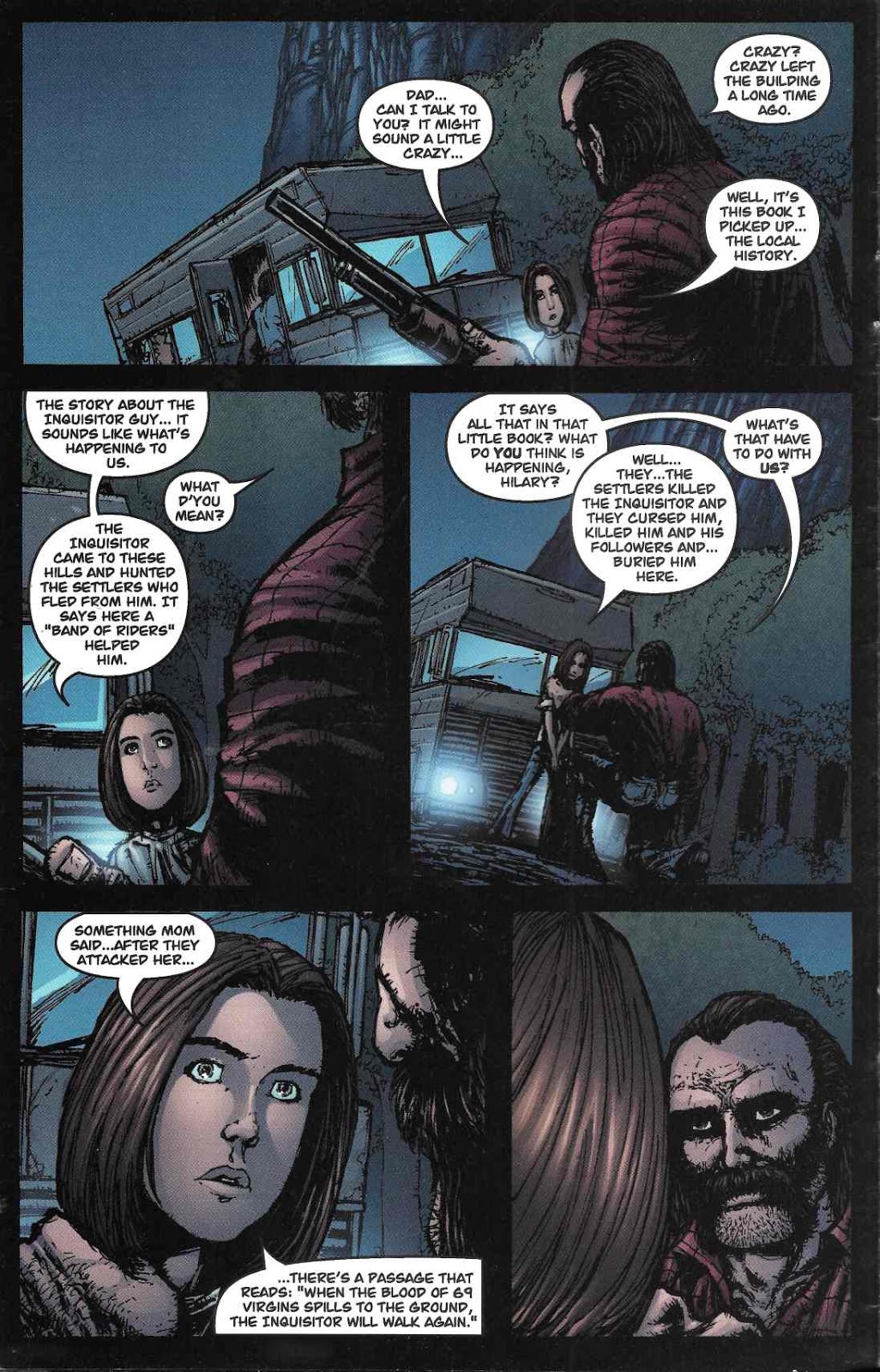 And it even pricks some of those fright nerves that we all have running through us. 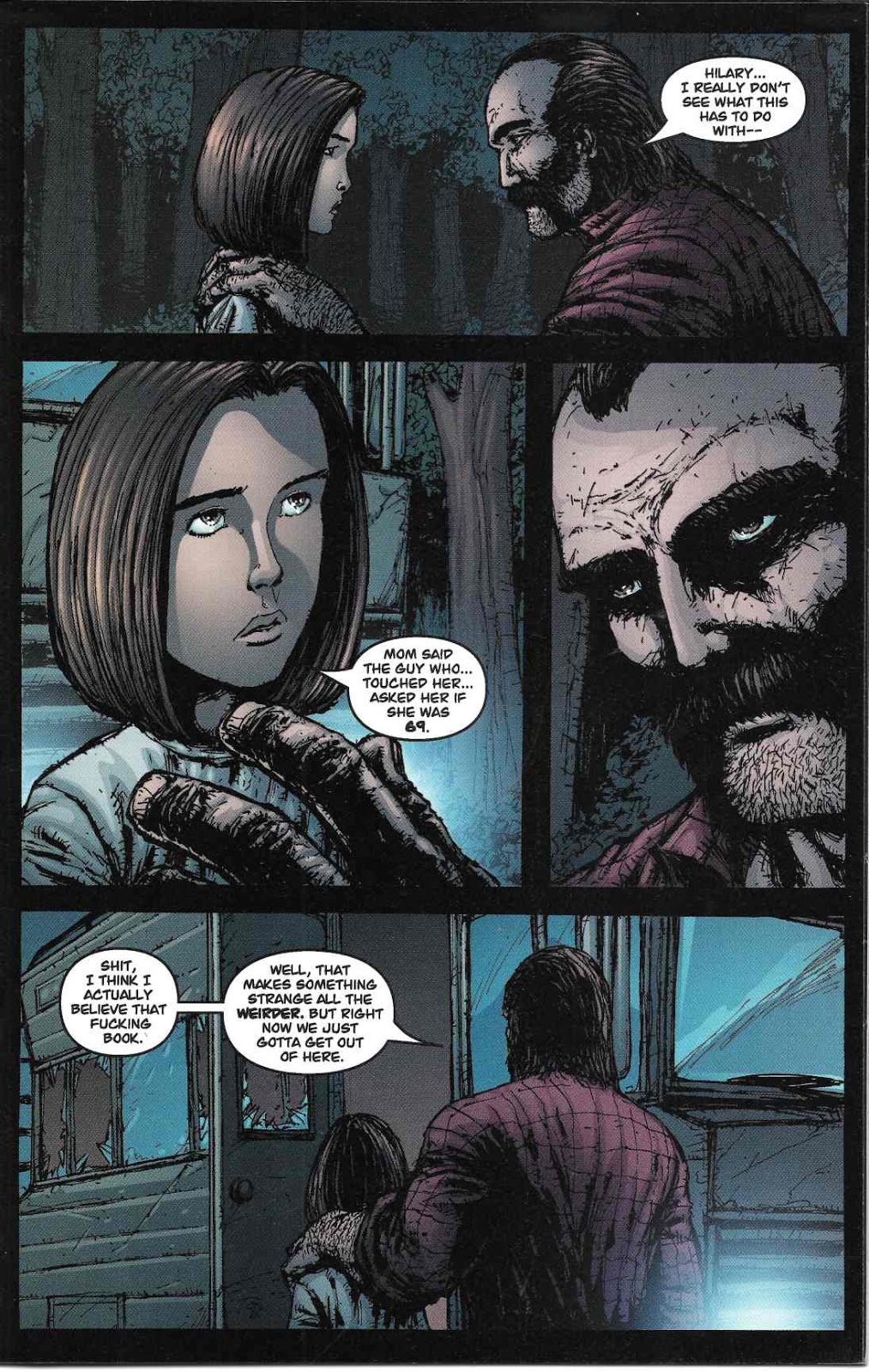 So, the good guys retreat up the hill and start flashing their lights. The result is as immediate… 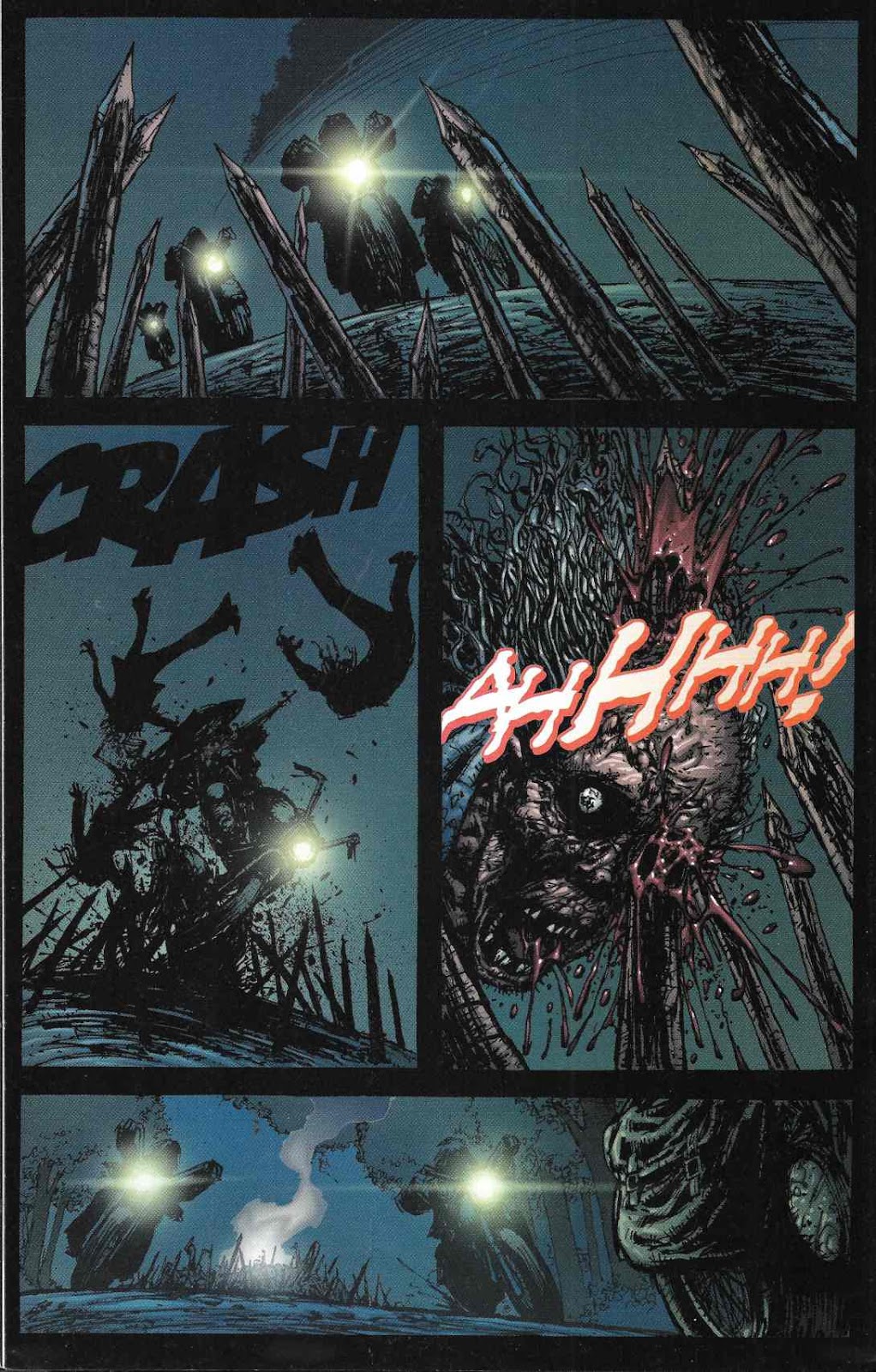 …as it is unfortunate for the bikers... 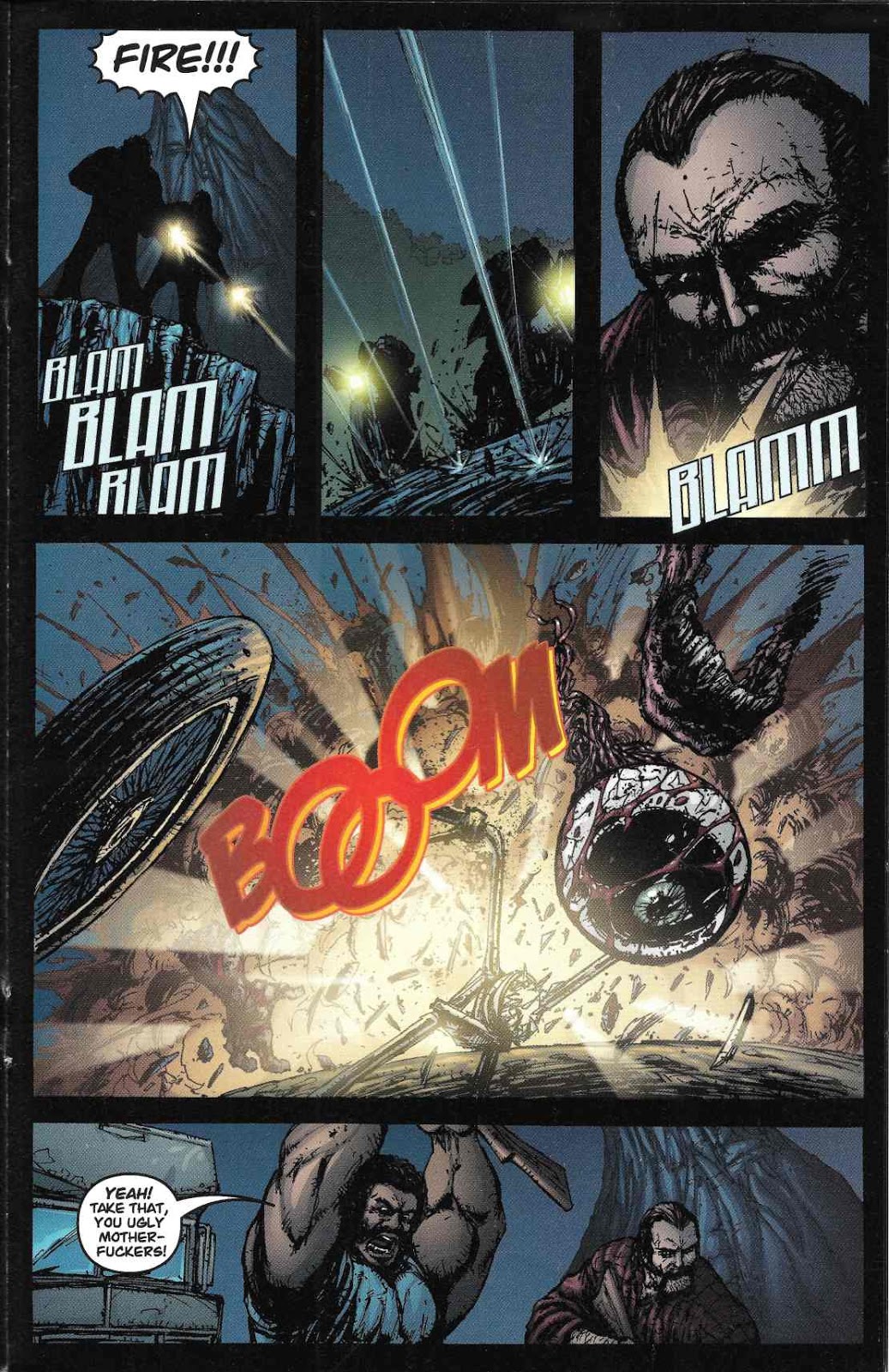 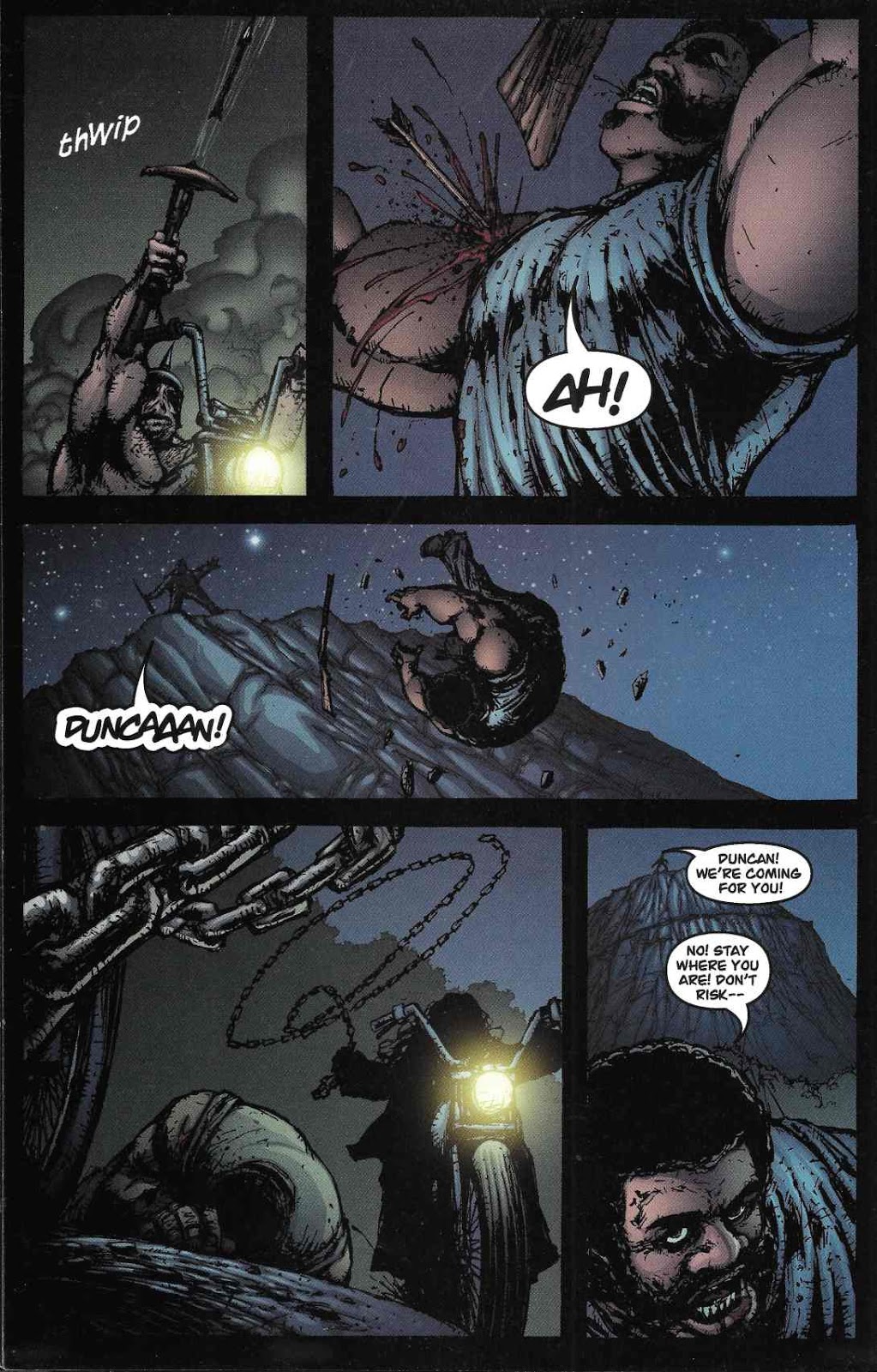 …and for Rex’s pal Duncan, who is shot and falls off the cliff. If that wasn’t bad enough… 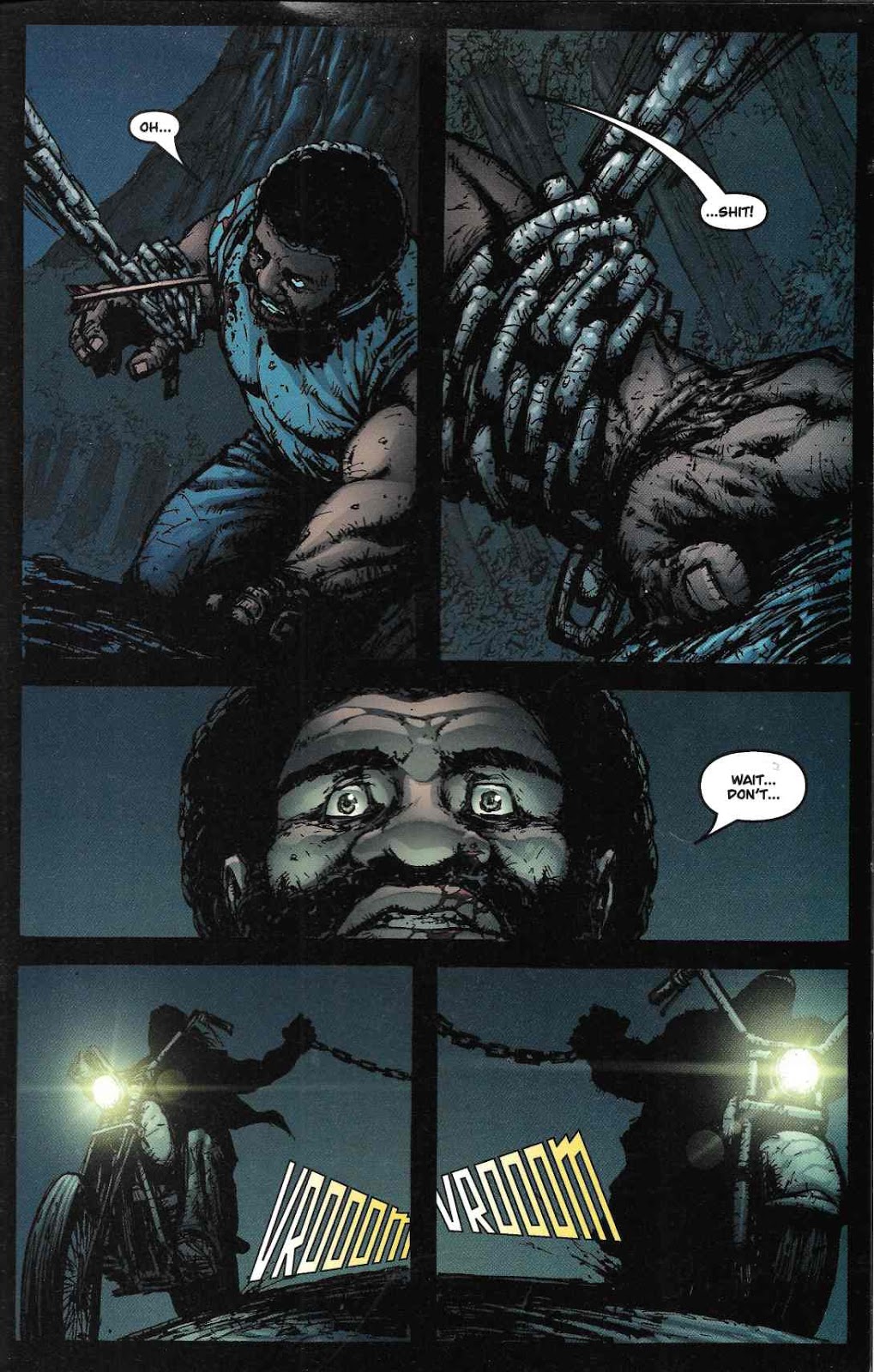 …he gets the drawn and quartered routine… 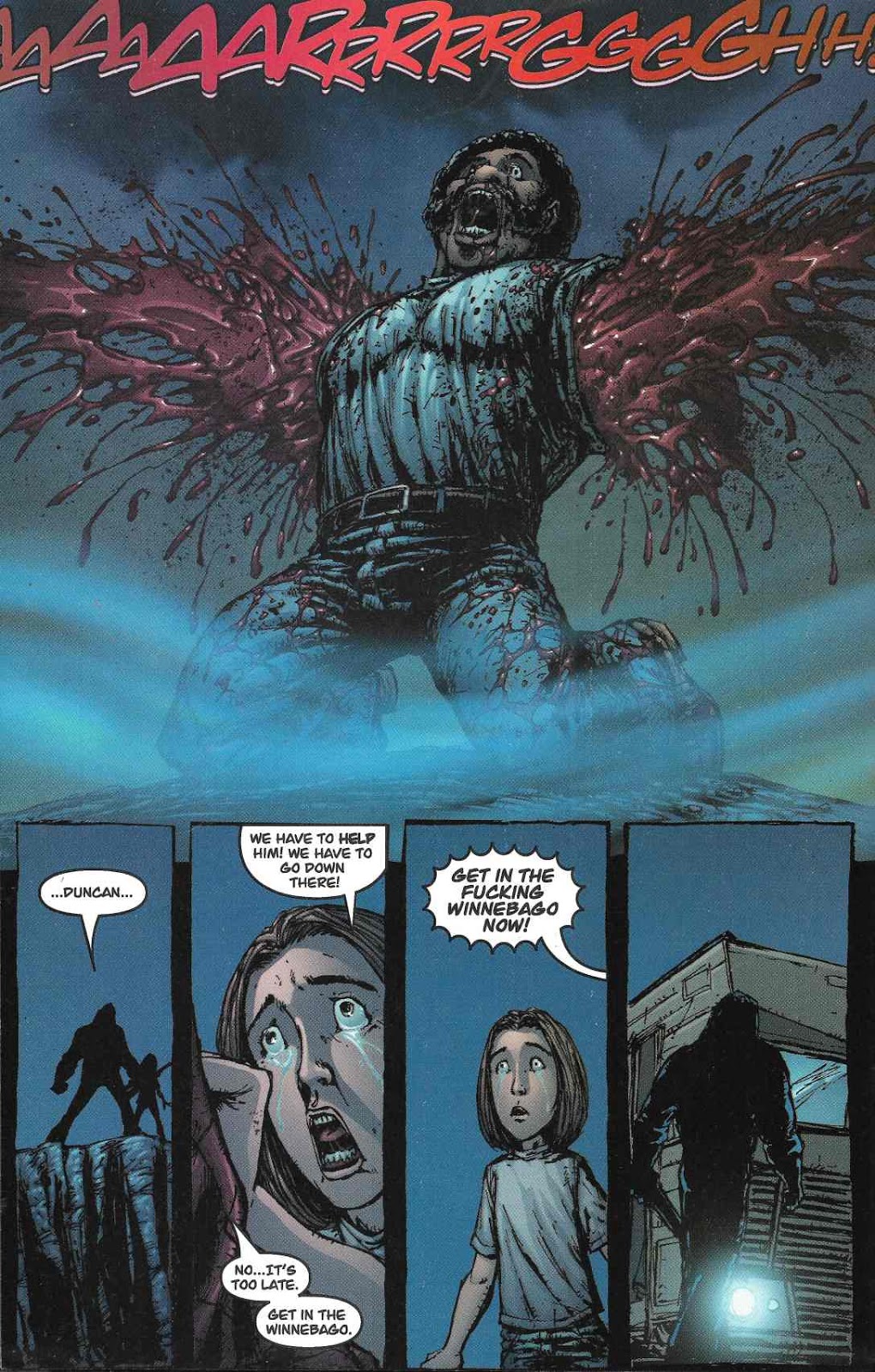 By two of the bikers. Pity. I think I would have liked Duncan.

However, I feel like the bikers have made a mistake. Like they just screwed with Rambo or the Terminator or something. Because Rex doesn’t look like the kind to back down. 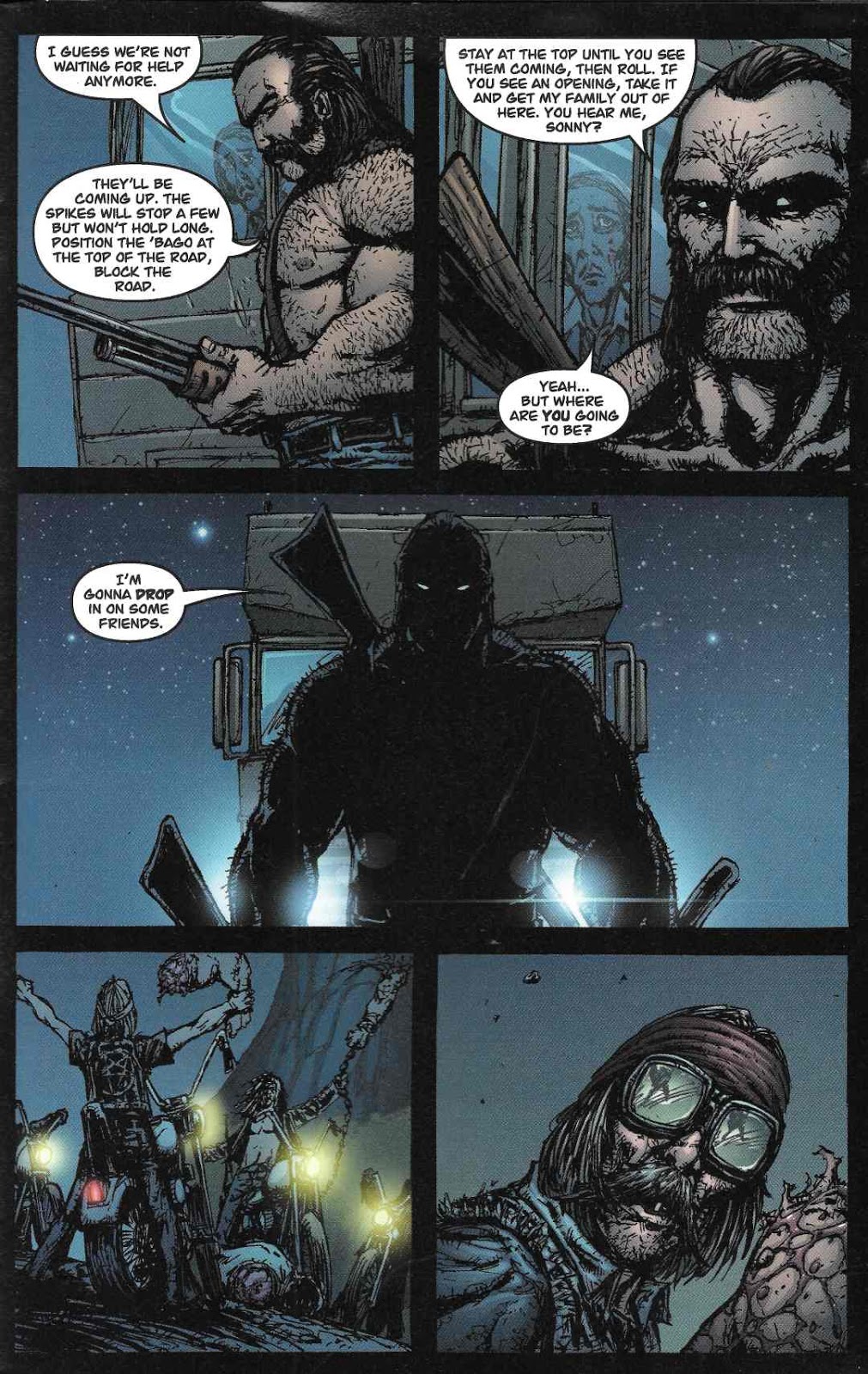 So, when he drops off the cliff top onto a few of the bikers and starts kicking ass… 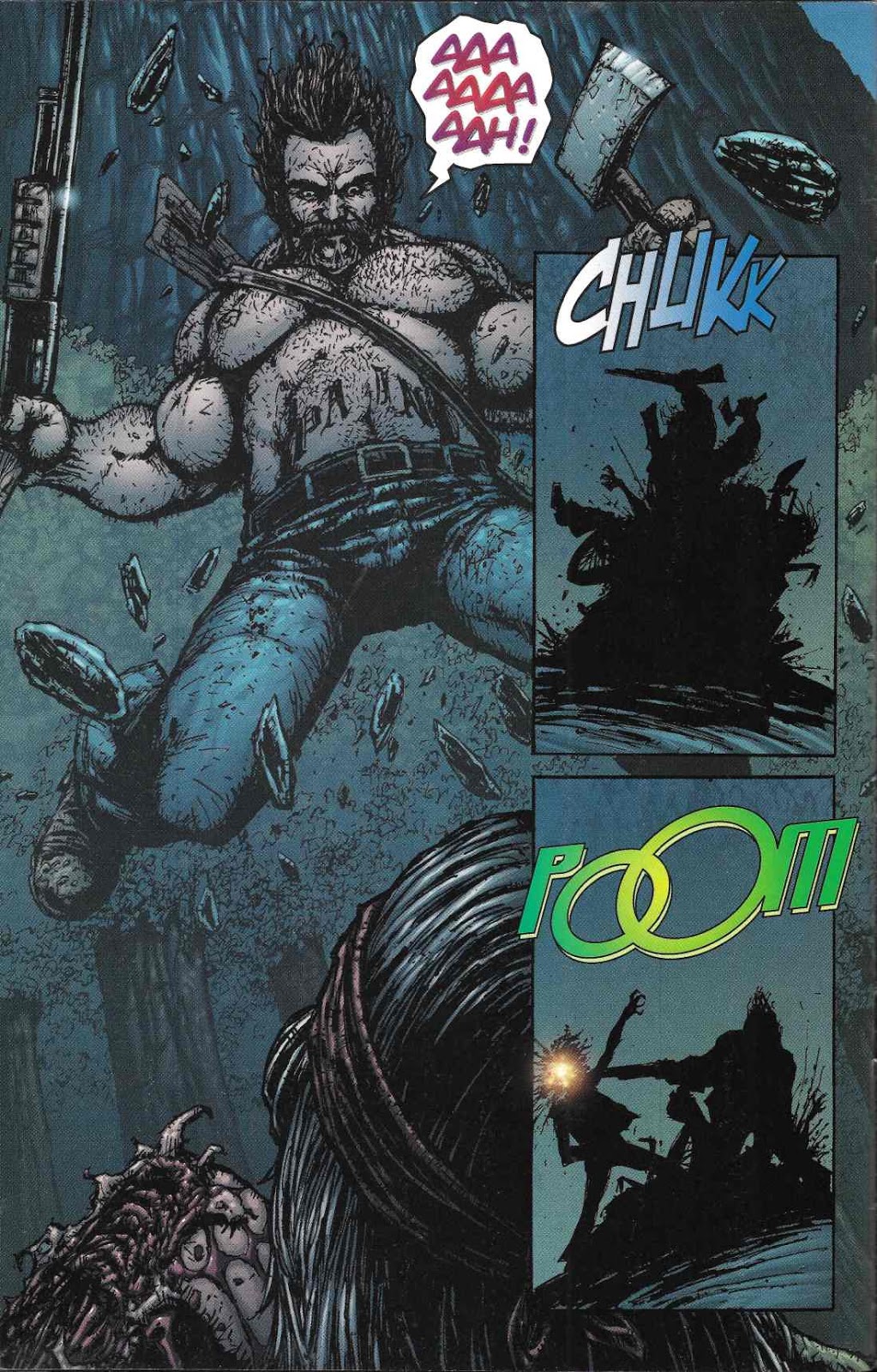 …I’m all in. At least until someone bigger than Rex clobbers him from behind. 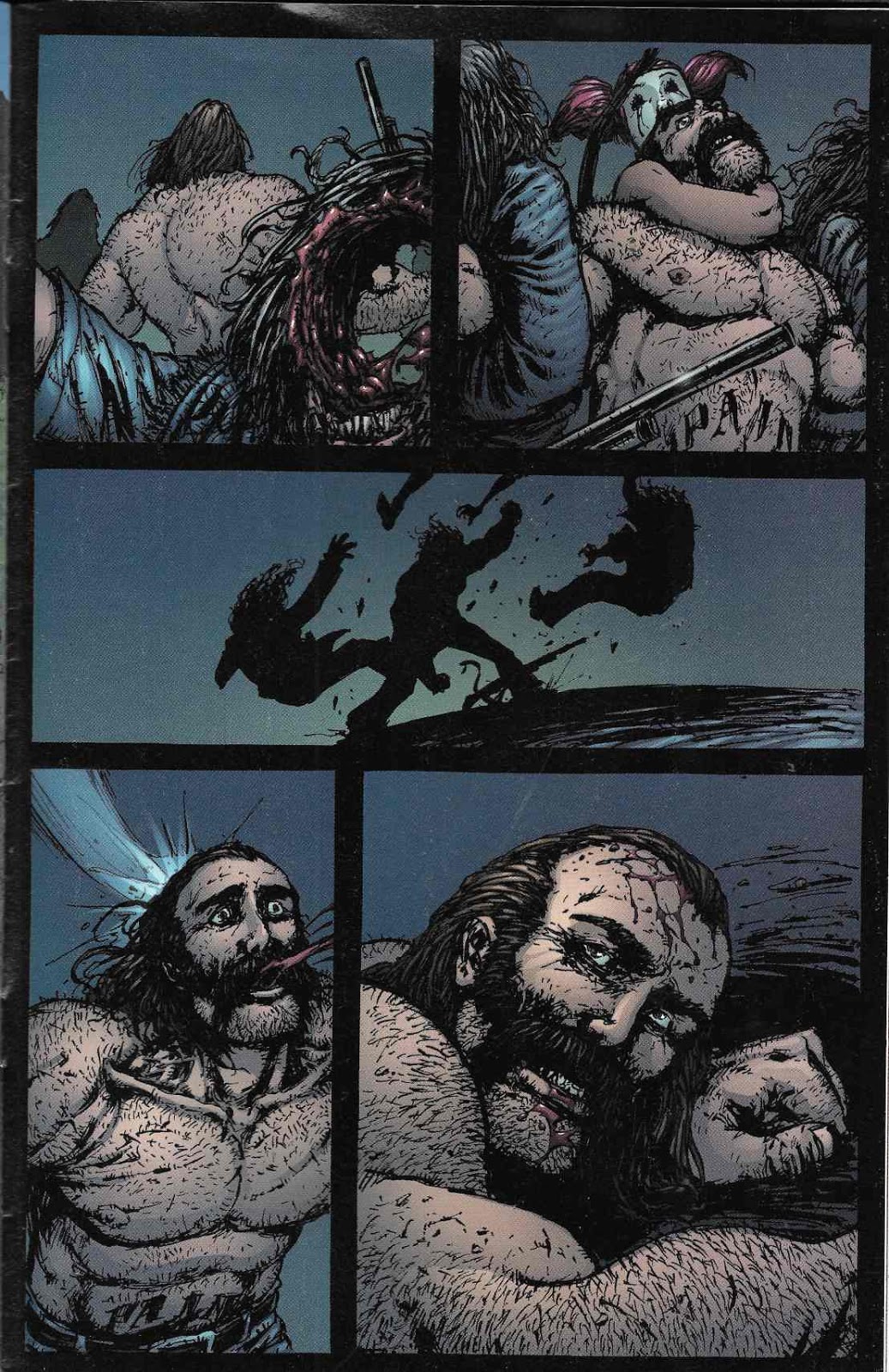 And when I say bigger, I mean BIGGER! 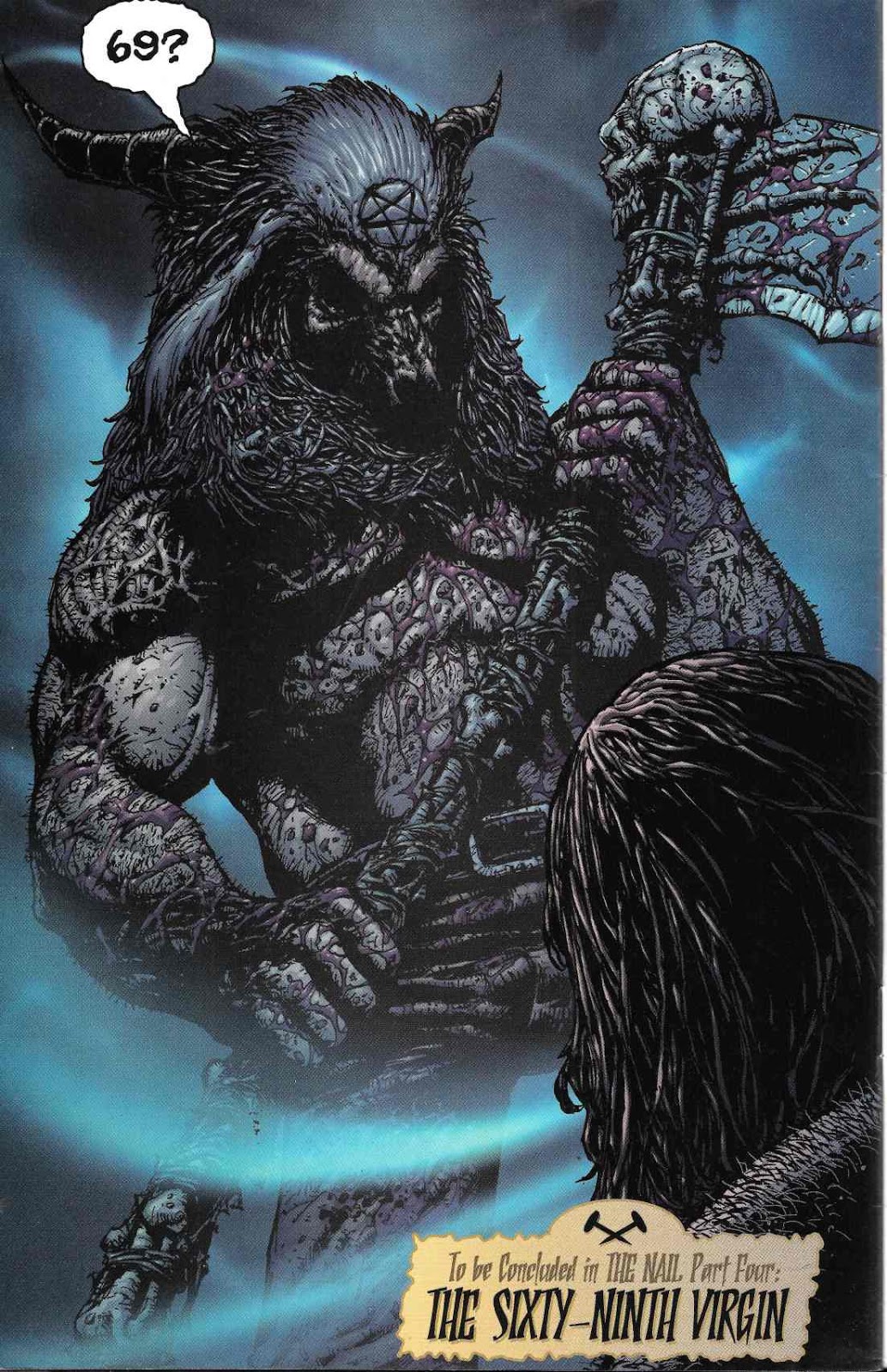 The Nail is one I’m going to keep my eye out for. And Nat Jones as well. His artwork here feels quite a bit like Richard Corbin in many ways, all of them ways I like. And I might give House of 1,000 Corpses one more try. Maybe I if I just skip to the Sid Haig parts? Those bits near the beginning worked okay for me. RIP, Sid. You’re still fighting Star Command in this old guy’s head.
Posted by SonOfCthulhu at 9:54 PM