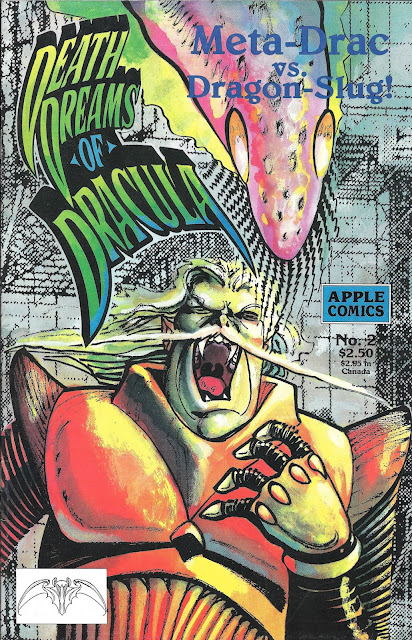 Apple Comics/Apple Press set out to become THE place for two things in the early 90’s. First, they produced pages and pages of true war stories centering on America’s conflicts over the last 30 or so years. The second thing they wanted to corner the market on was all things Dracula. Titles such as Blood of Dracula, Big Bad Blood of Dracula, Death Dreams of Dracula, Dracula in Hell, and to combine these two things, Vampiric Jihad.

Apple was of course what WARP graphics, the Elfquest publisher, morphed into and they had LOTS of other titles. However, the sheer volume of these two genres coming out around 1990-1991 feels a bit like overkill. Most of the Dracula titles didn’t last more than an issue or two, but to produce so many at once seems a bit foolhardy. Not to mention that most of them were so bizarrely strange. I’ve reviewed issue number 2 of Dracula in Hell over in the Adult Crapbox and it holds the title of being one of the single weirdest books I’ve ever encountered.

Death Dreams isn’t quite up to that bar, but that’s not to say it doesn’t try. An anthology series that mixes new and old content, DD of Dracula has its moments, but most of the content appears rushed, unpolished, and mostly unfinished. Stories don’t wrap up, the just wander off near the ending. Again, as I said: Bizarre!

As for pairing Dracula off against things…well, lets take a look…

Our opening gambit in the Dracula-fest needs a bit of brief introduction. On the inside cover page of this issue is scrawled this brief explanation for the stories we will find nestled between the covers of this slim book.

“Following his demise at the hands of Quincey Morris and Jonathan Harker (see Bram Stoker’s novel), Count Dracula is denied peace. Now he is trapped in unlife, cursed to be drawn back to the material world, like a moth to flame, to witness and experience pain, suffering, and evil – but always to be denied a true death of his own…”

Basically, meaning all these stories are dreams Dracula is having while awaiting time in whatever purgatory or limbo realm DD of D creator Rickey Shanklin thinks proper. Like this first tale, where Dracula is following this kid named Davey around in some kind of weird D&D dungeon. 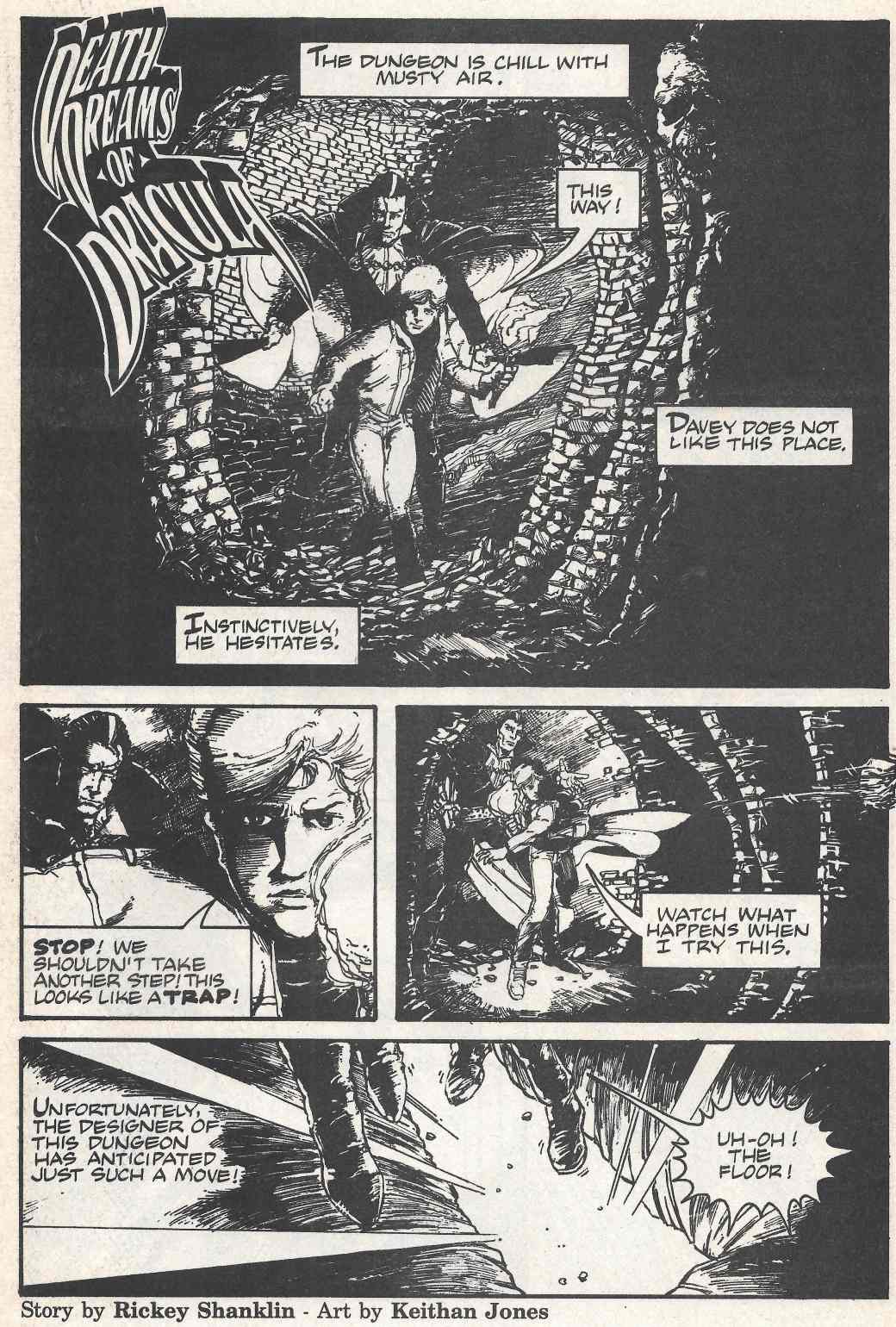 As the floor becomes a pit trap, Dracula and the kid are plunged into a spike-laden pit trap. Dracula can transform into a bat and fly up and out of the pit. Davey, not so much. 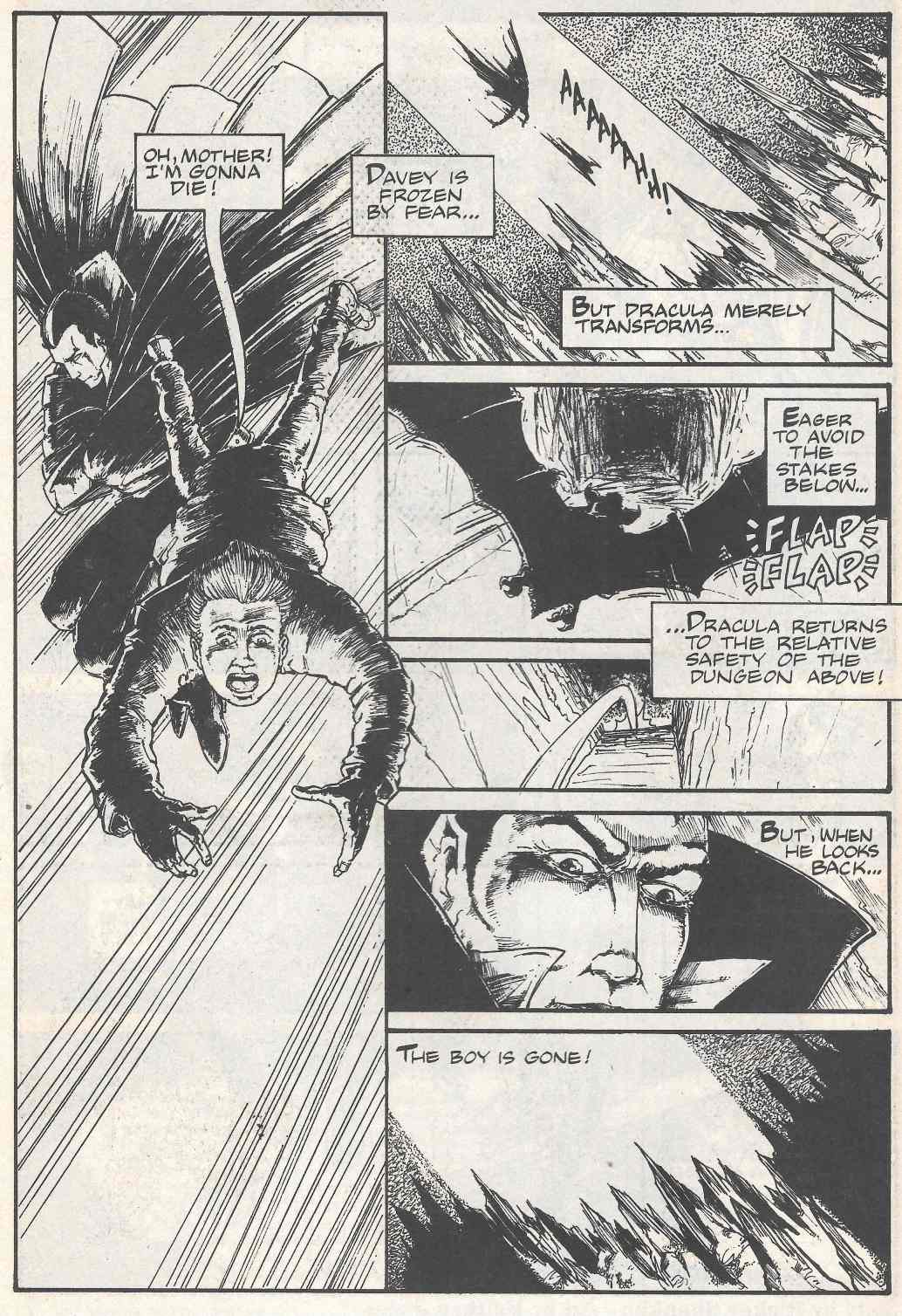 But Dracula finds that Davey just disappeared instead, which begs the question: WHY DO WE GIVE TWO CRAPS ABOUT DAVEY? What the truck are the rules of this story? Why doesn’t Dracula just drink that kid like a small juice box and move on? What is really going on here? 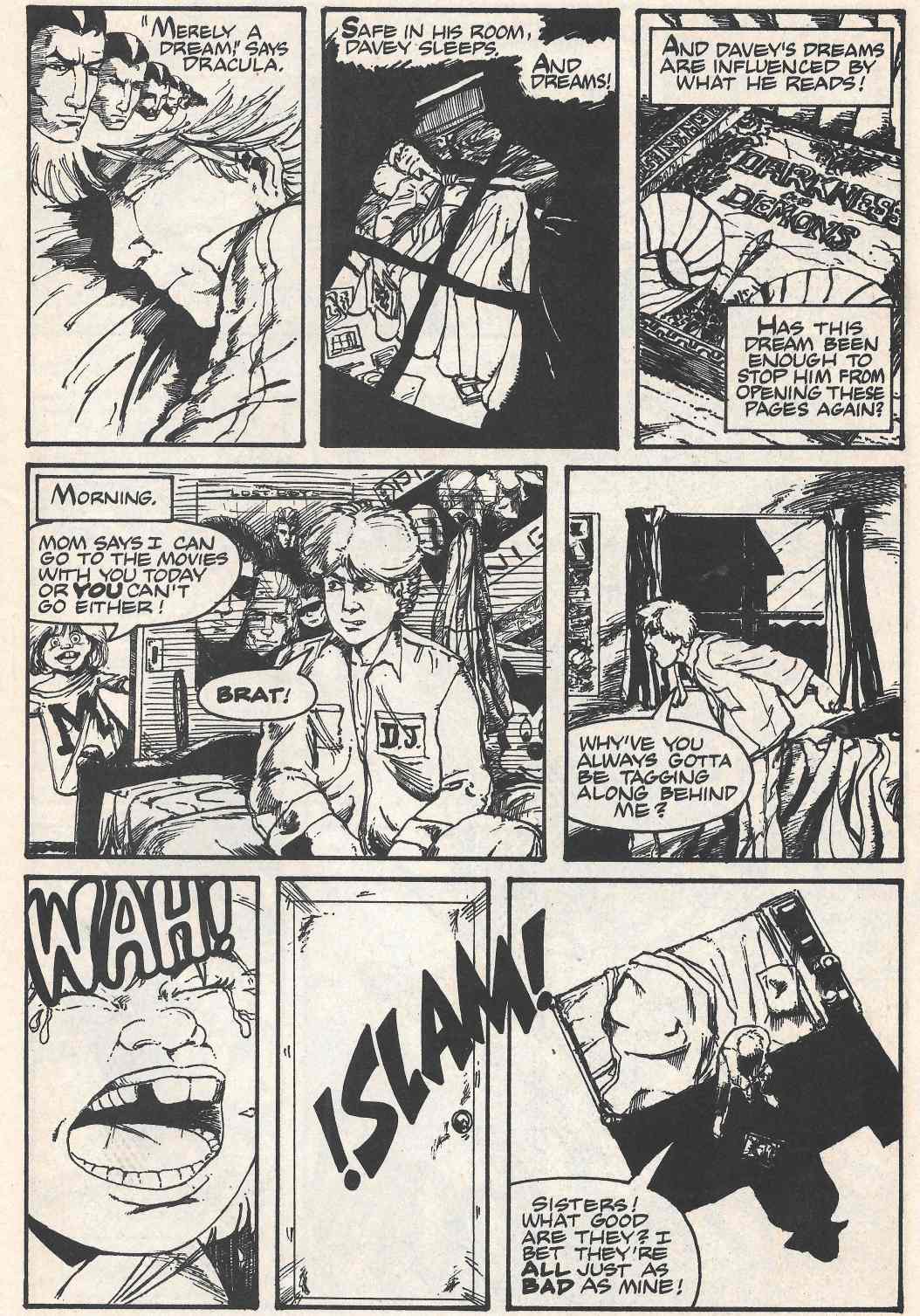 I don’t know and I don’t really think the writer knows. The next page is the “real” Davey (one can only assume) awakening from the Dracula dream. We are shown that Davey’s unconscious is picking up on the things around him to create these weird dreams and I suppose Dracula is stuck in them with the kid. It would be nice to have the spelled out, however.

Also, I have no clue what the stakes are in this? Are we rooting for Team Drac & Dave to accomplish some great task? So the next day, when Davey falls asleep in class and dreams he’s being attacked by a giant Dune-sized dragon thing… 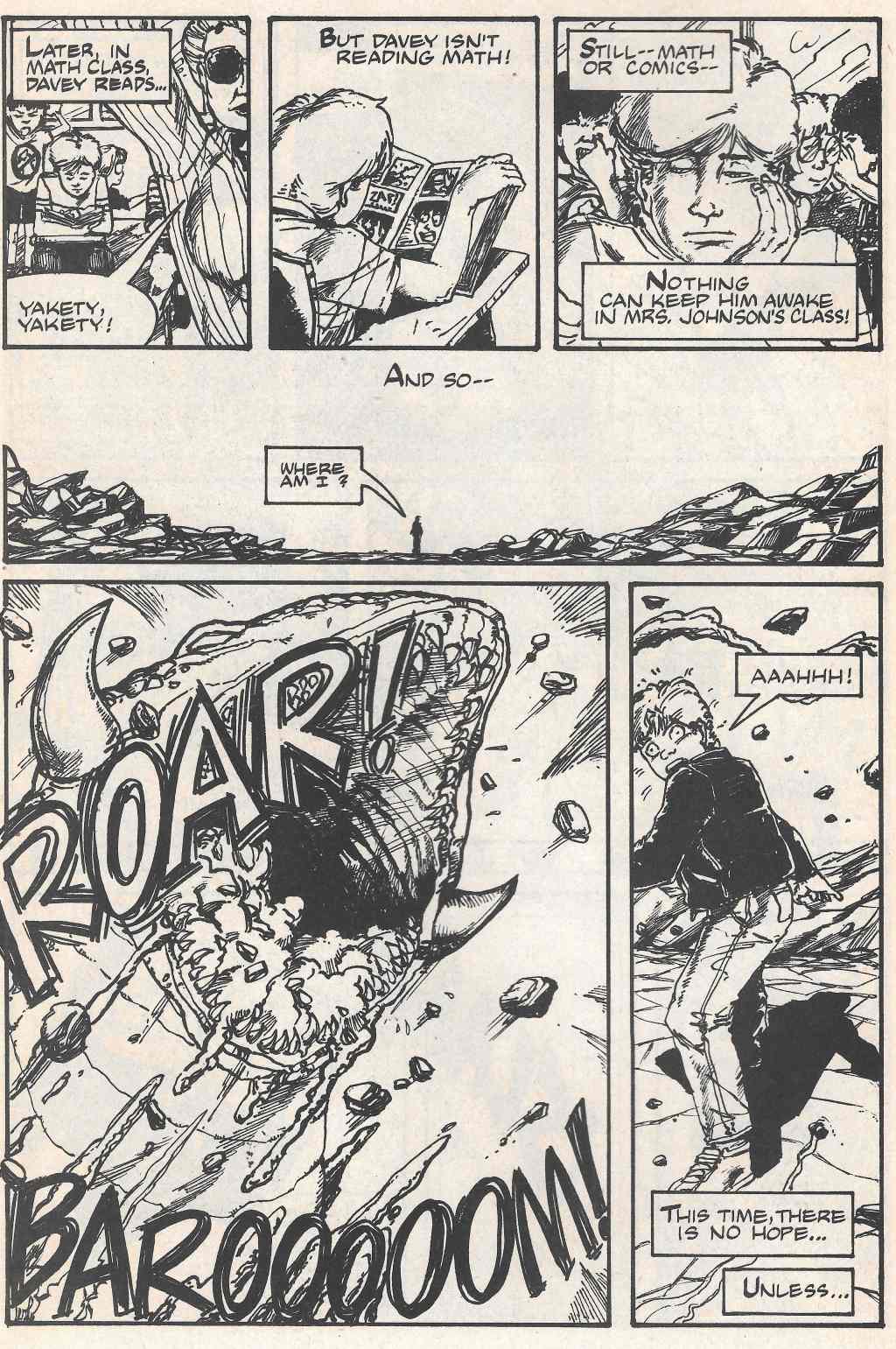 …when a like-sized, giant armored Dracula appears to fight the huge creature Power Ranger’s style, we can at least know why we are rooting for one side or the other to win. As it is, we don’t have stakes and so we don’t care. As dumb as the “MetaDrac” concept is, it pales in comparison to the stupidity of thinking we can muster an ounce of feeling for what’s happening in this story. 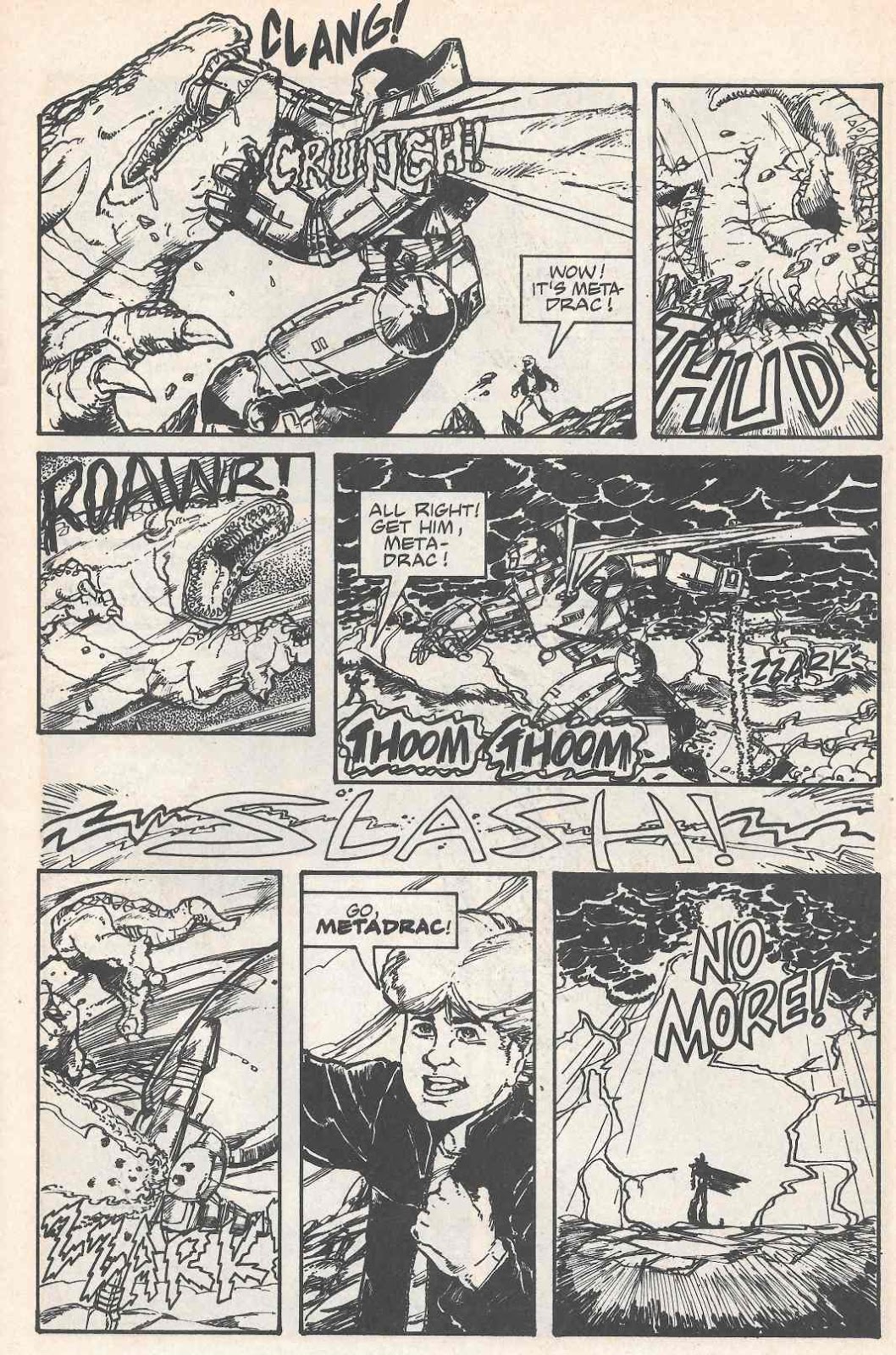 Davey gets woken up by the teacher and we move on to him taking his sister to see a Dracula movie. Again…no stakes, so when Davey nods off… 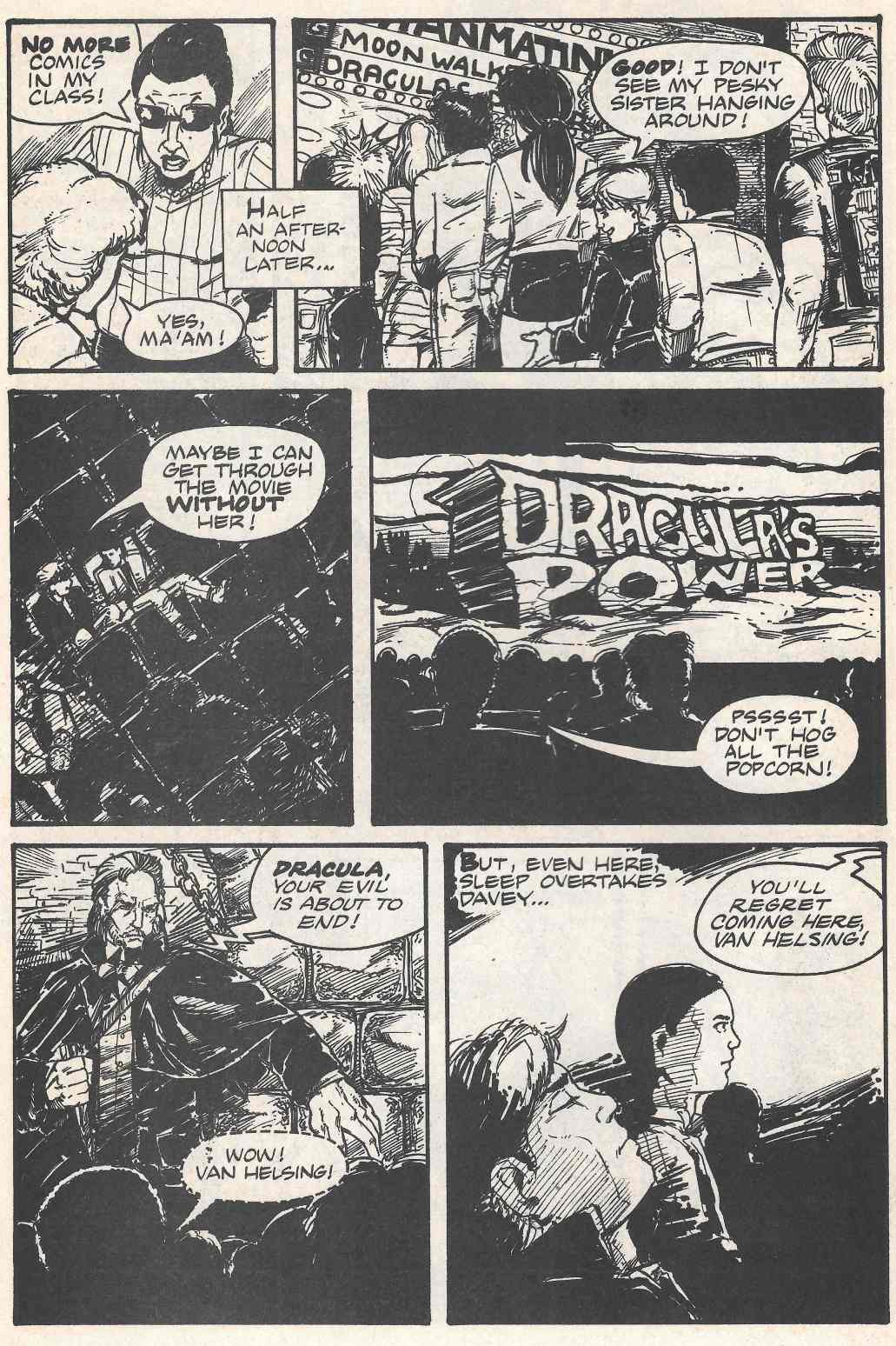 …Dracula kills his age old enemy and then confronts Davey like he’s mad at the boy. Davey apologizes…for what I’m not exactly sure…dreaming anything at all maybe? It’s too unclear. And if Davey doesn’t dream, where does Drac go? Also unclear. 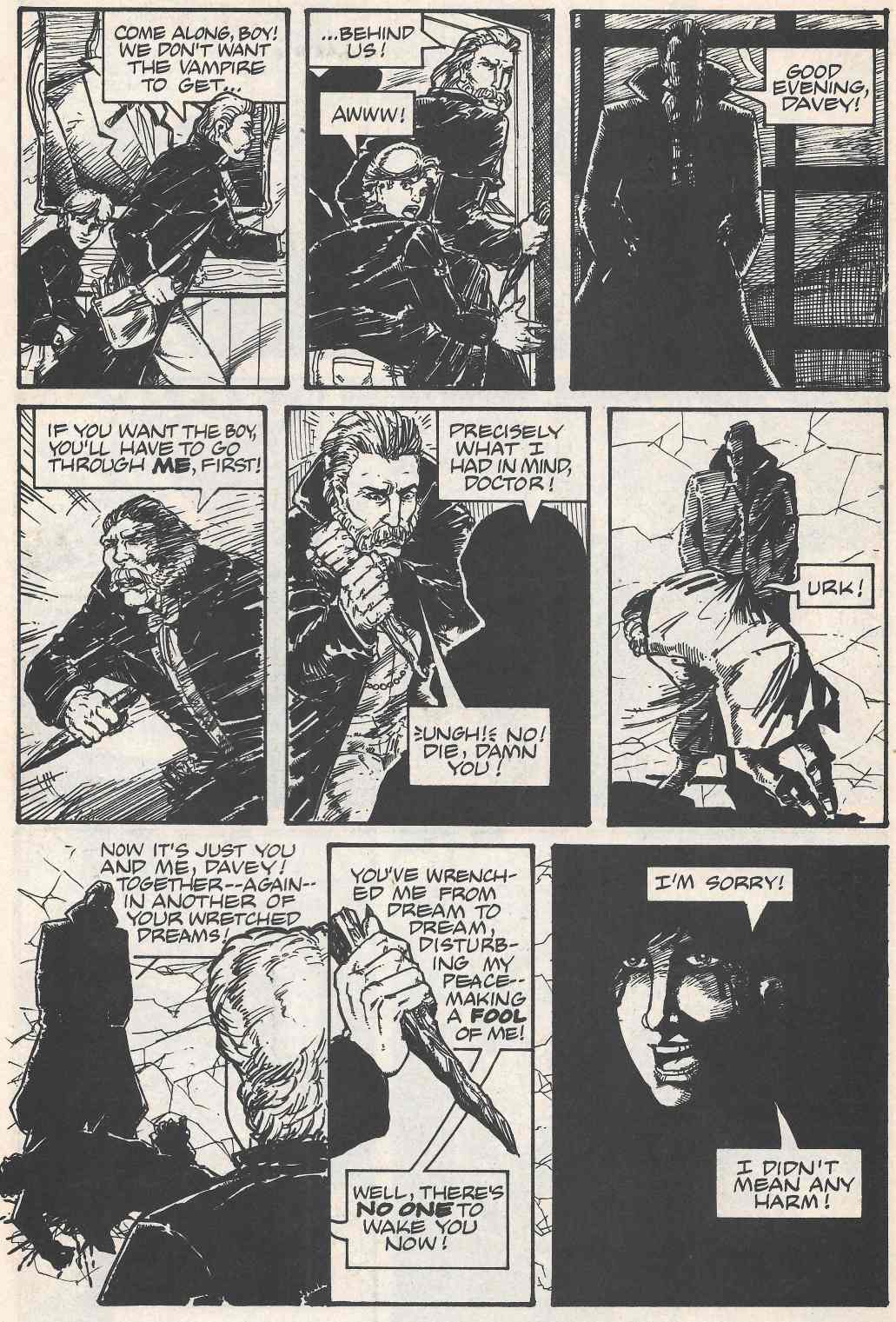 What we do know is that at the precise moment Dracula is about to impale the lad, his sister shows up and wakes Davey. He’s suitably grateful, but seems like Dracula will be there the next time he konks out, so not certain what this reprieve really nets him. It’s a dumb concept poorly executed. 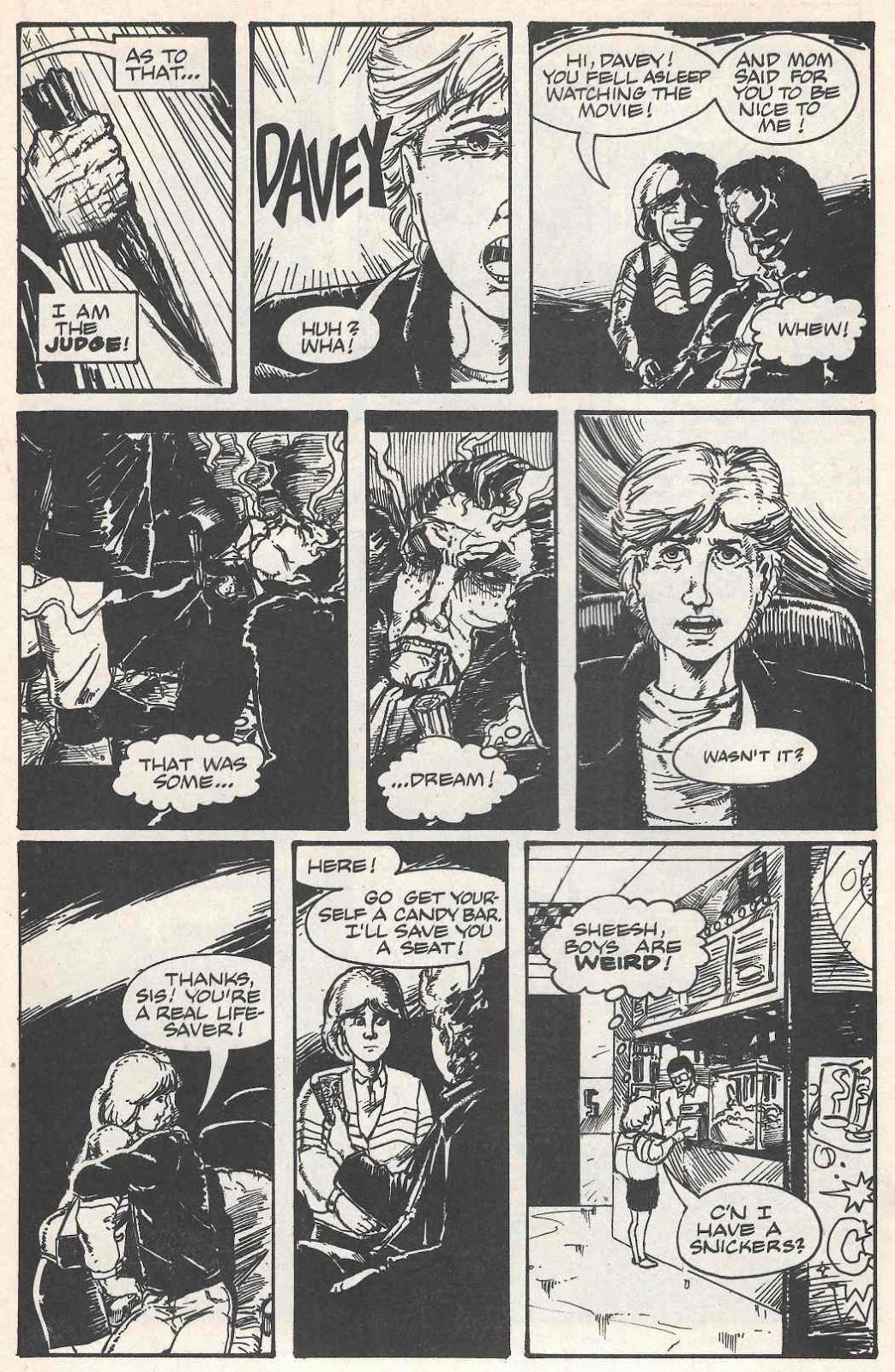 Also, this is the end.

Moving on to the books second “story”, we have a little clearer structure this time. Appears this will Dracula versus Sewer Monsters. Yeah, you heard me right. Sewer Monsters. 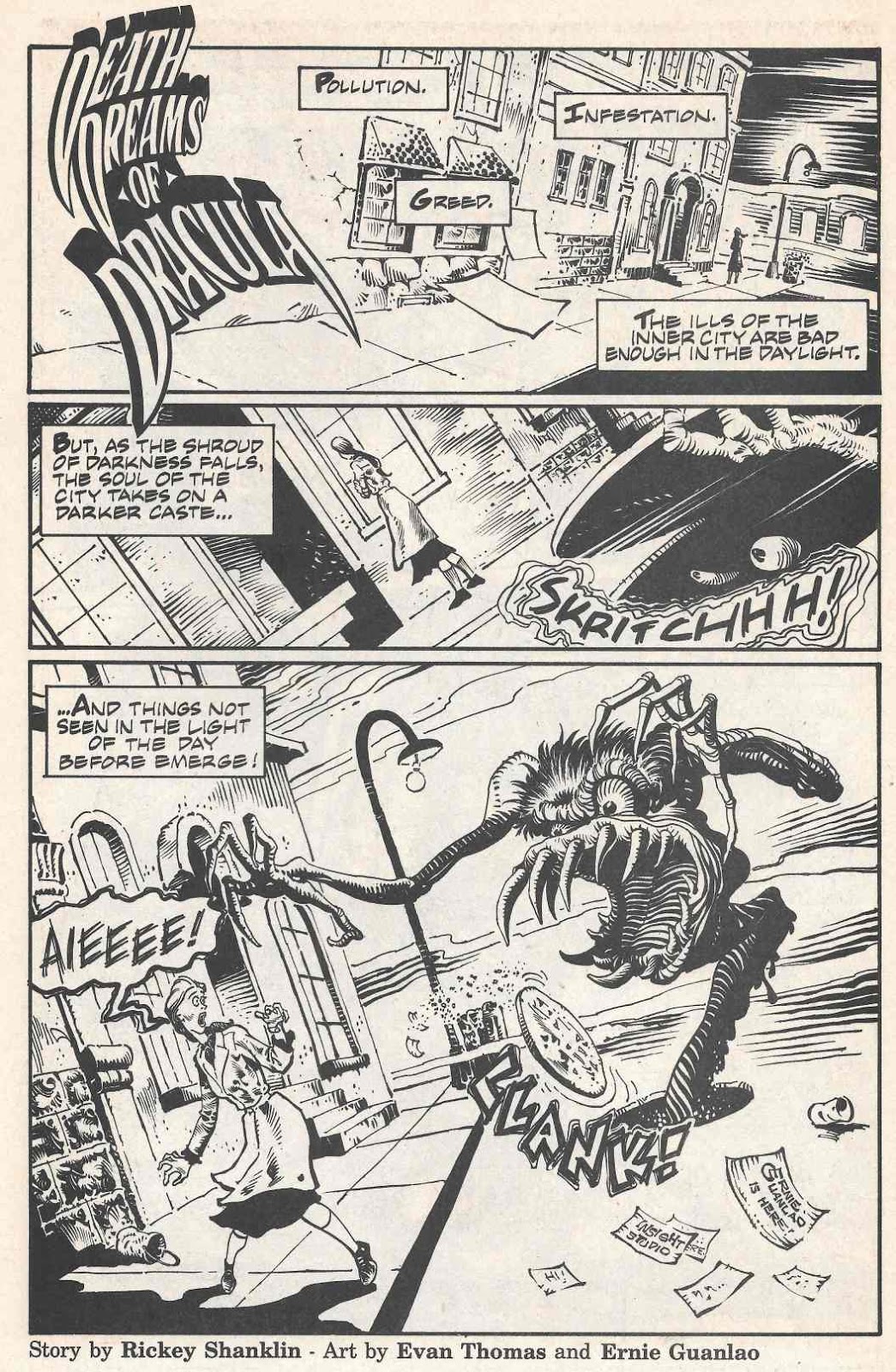 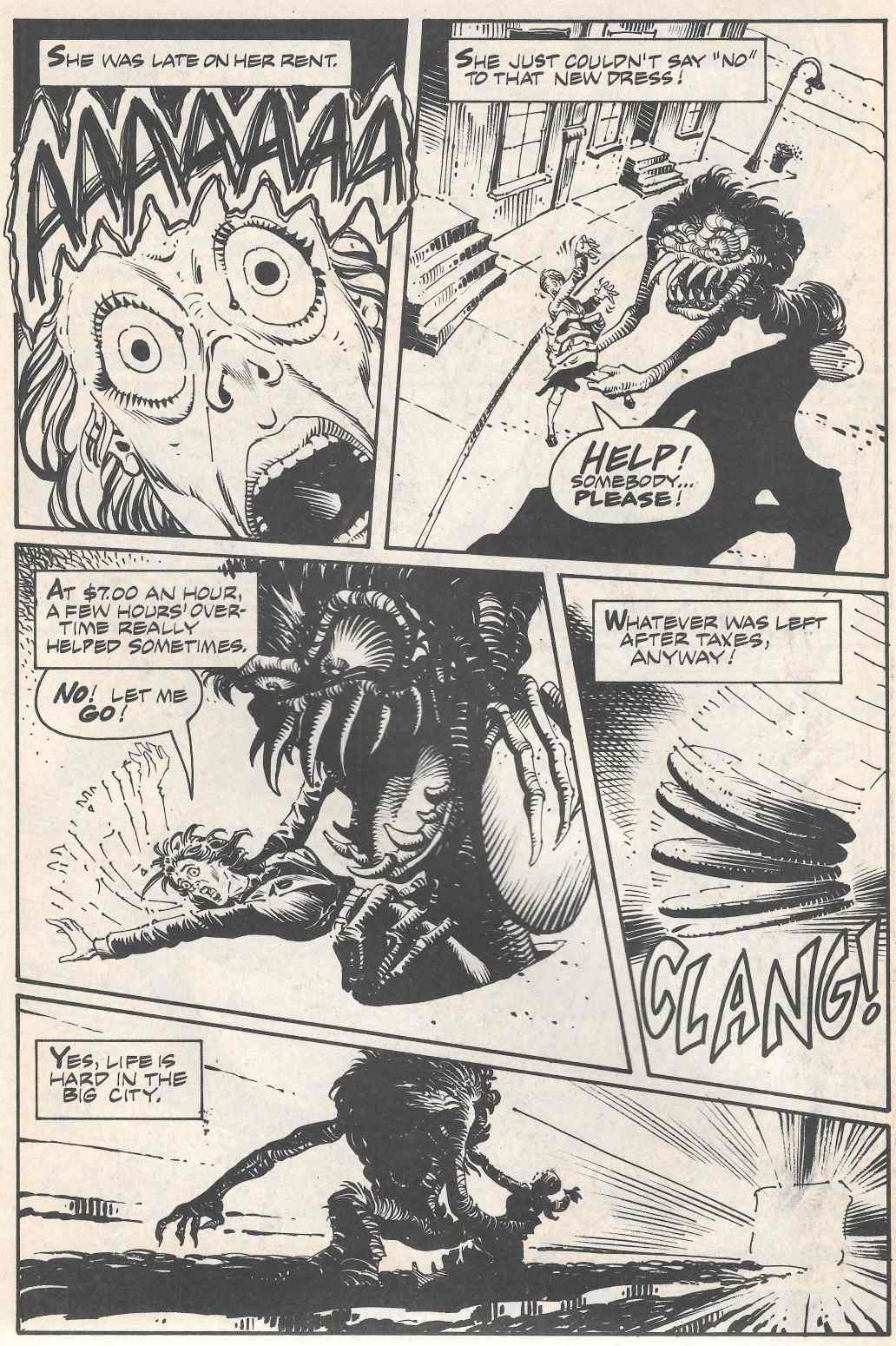 …which drags the lady back down into the sewer and carries her to a part of the pipe-ways that glows with light.

Here we find weird sewer goblins that eat people they drag into their man-made tunnels. 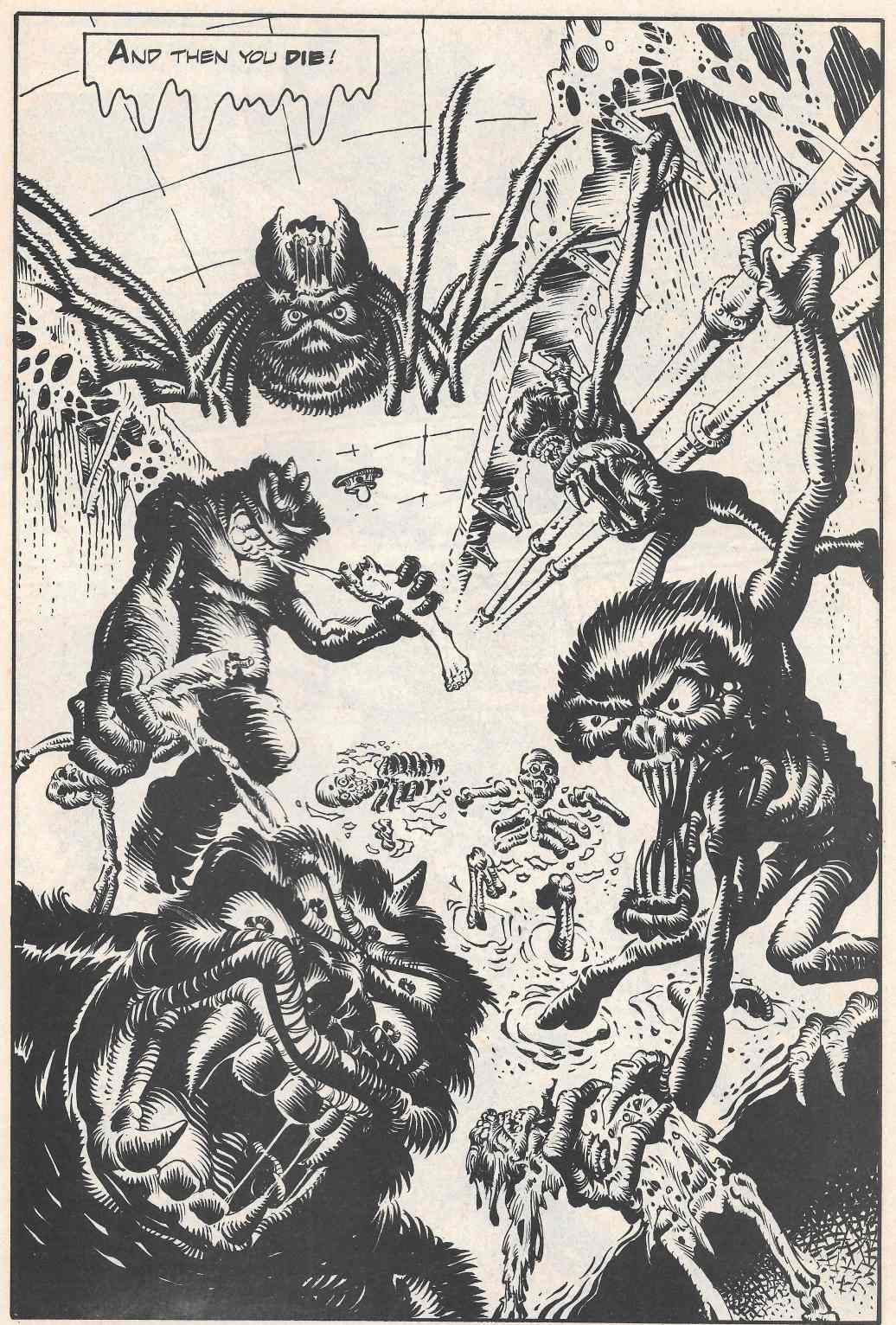 She breaks free momentarily and the creatures chase her around a bit and then eat her. 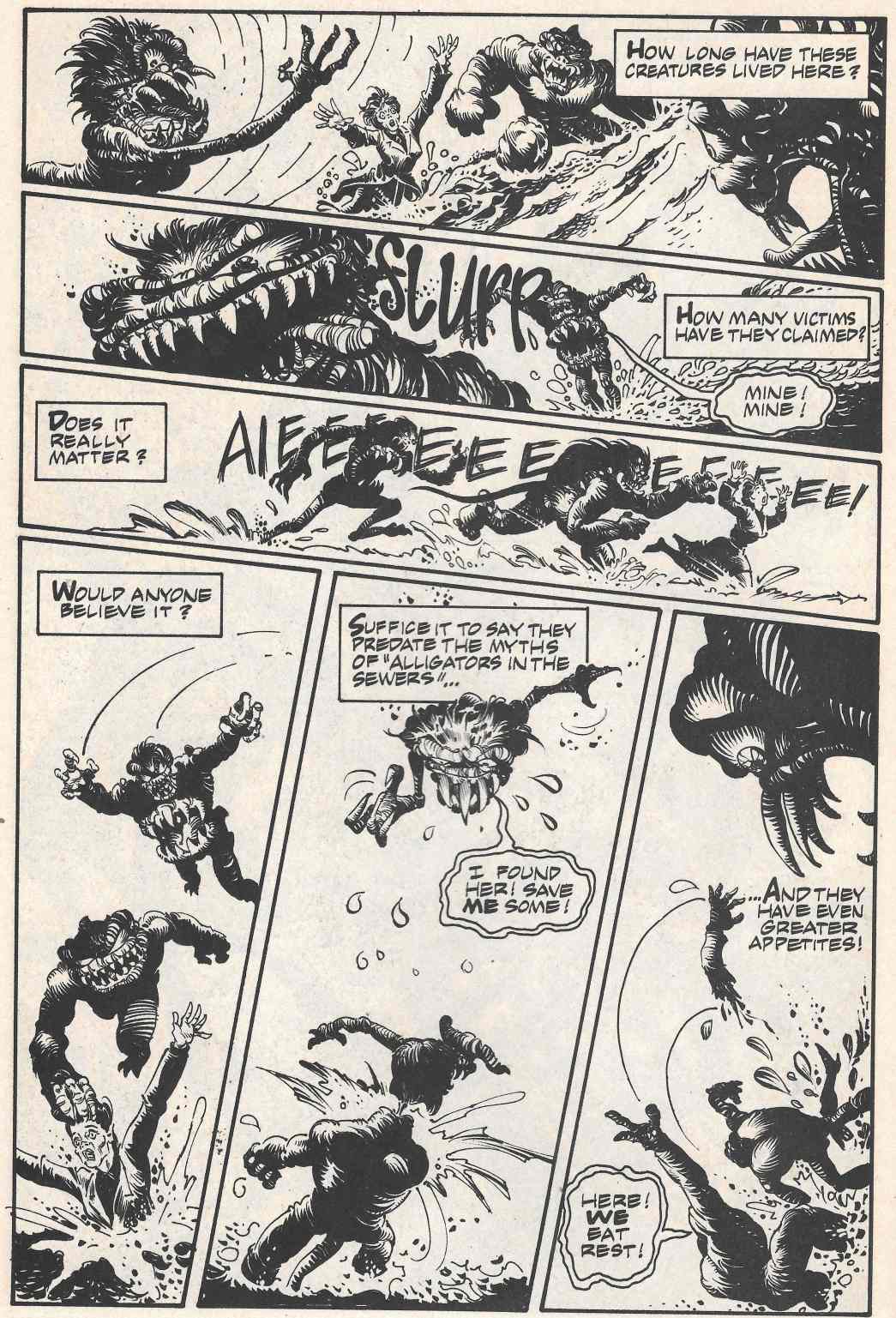 SUDDENLY! the book REMEMBERS that it’s supposed to be about DRACULA, so he shows up the next evening and follows a different woman’s screams deep into the tunnels. She is also being harassed by sewer ghoulies. 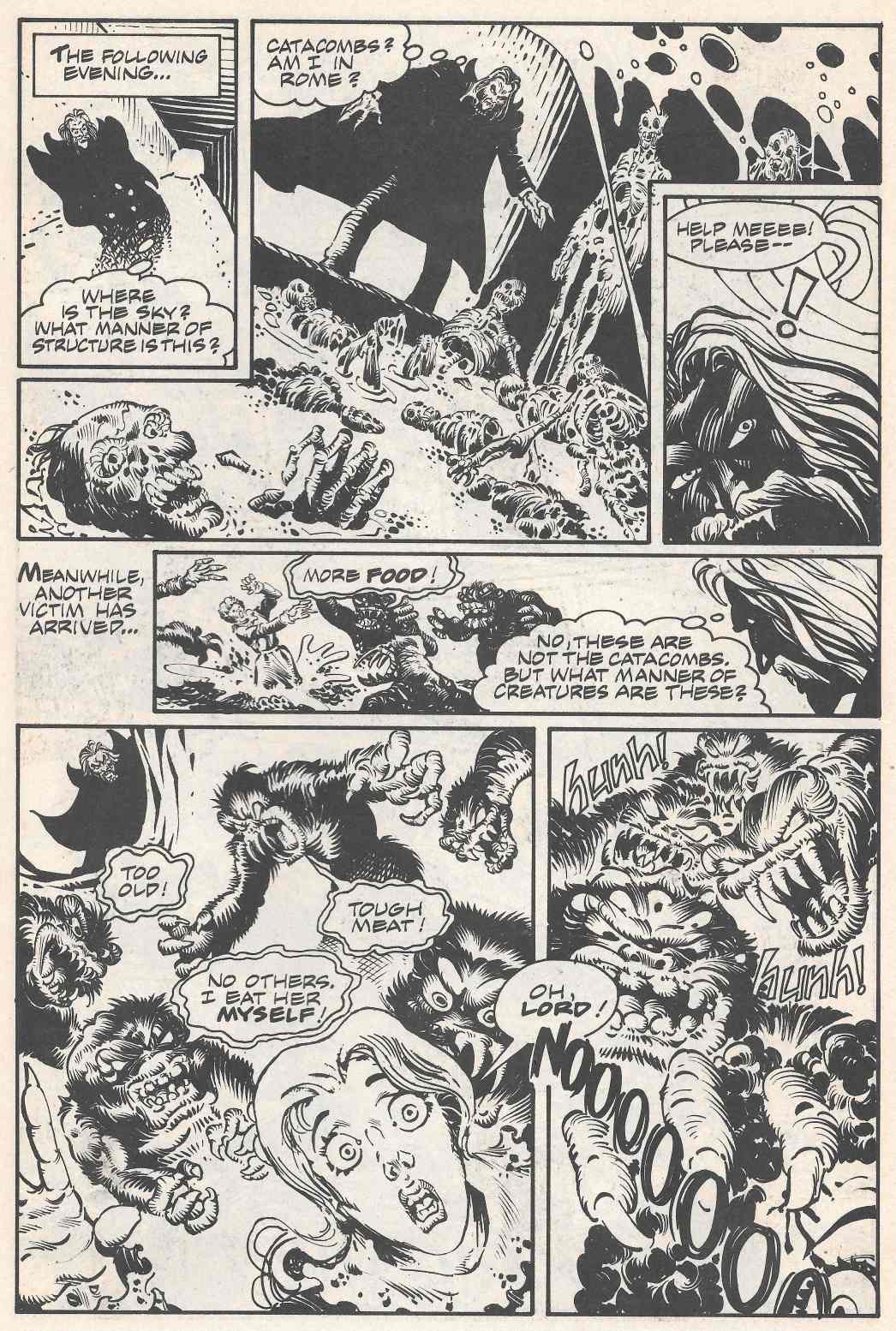 For some reason, Dracula feels it is necessary to intercede on her behalf. The goblin things quickly find they don’t like the taste of undead flesh. Dracula finds that he can pull the monsters apart with little effort. 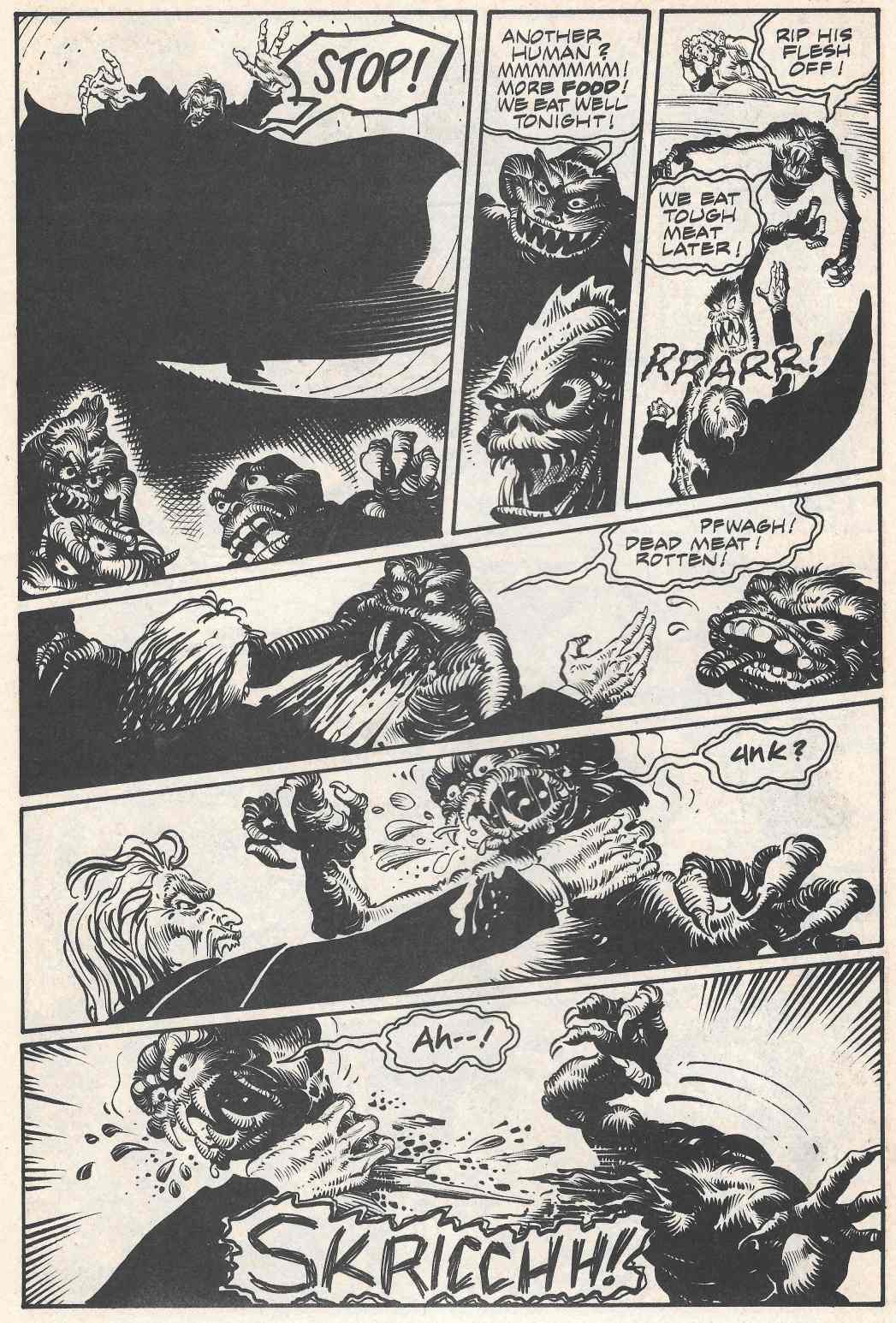 I will be the first to admit, I have no idea what Dracula’s motivation is in this story either. Does he want to suck the woman’s blood? Is he motivated by a more altruistic goal? Or does he just want to show off? Book help me out here. Flesh out your main character a bit so I understand why he is doing what he is doing. 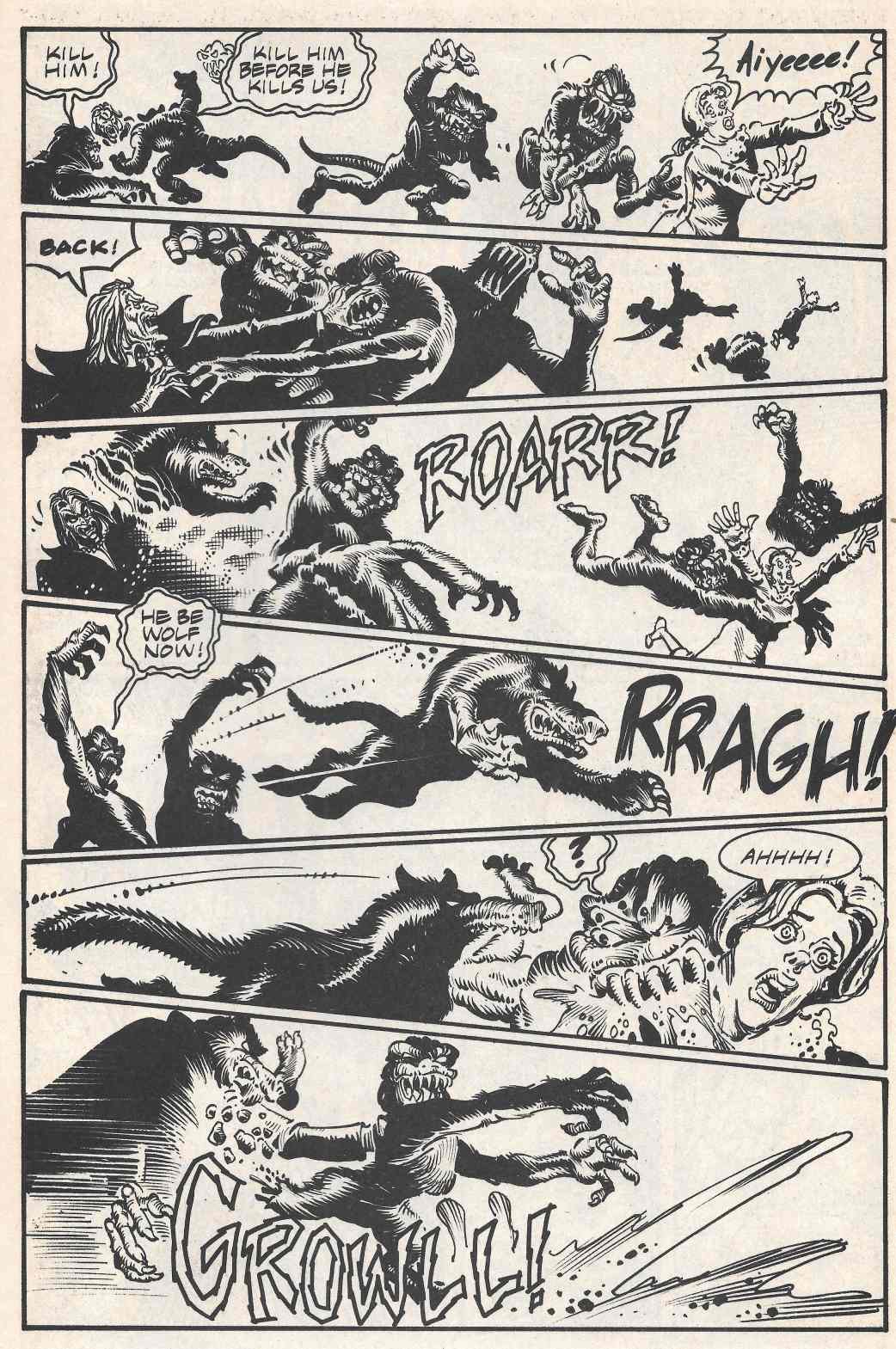 Or just show random scenes of Dracula turning into a wolf and killing sewer monsters. Yeah, that will satisfy me…(not. That was sarcasm) 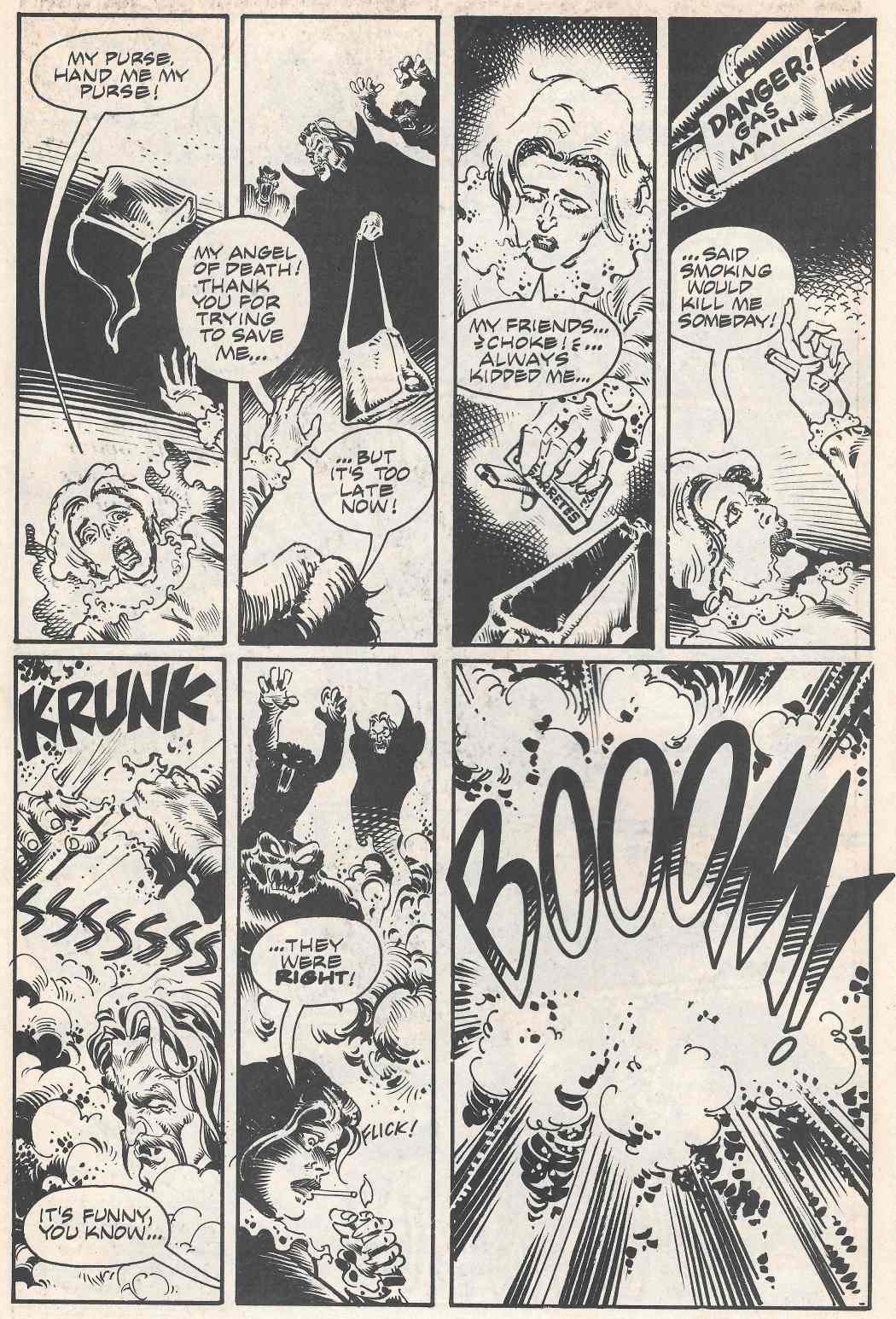 Whatever. Just end this mess, Shanklin. You have interesting ideas, but you need someone editing you that knows when to tell you to go back to the drawing board to add some human motivation to things. Neither of these first two collection of pages make an actual story. Sure, people show up and actiony things go on, but there really is no rhyme or reason to them. They are sorely lacking.

It comes as a small surprise that the BEST story in the entire mix is this affair called Nosferatu. The simple two-page setup, character mix, action, and payoff is better than the other three tales in the volume. There is no artist or writer listed, but the style appears to be something lifted from an older volume of b&w horror tales. Perhaps a tale meant to fill space in a large magazine sized horror book from the 60’s or 70’s. It matters little, here is the entire thing. 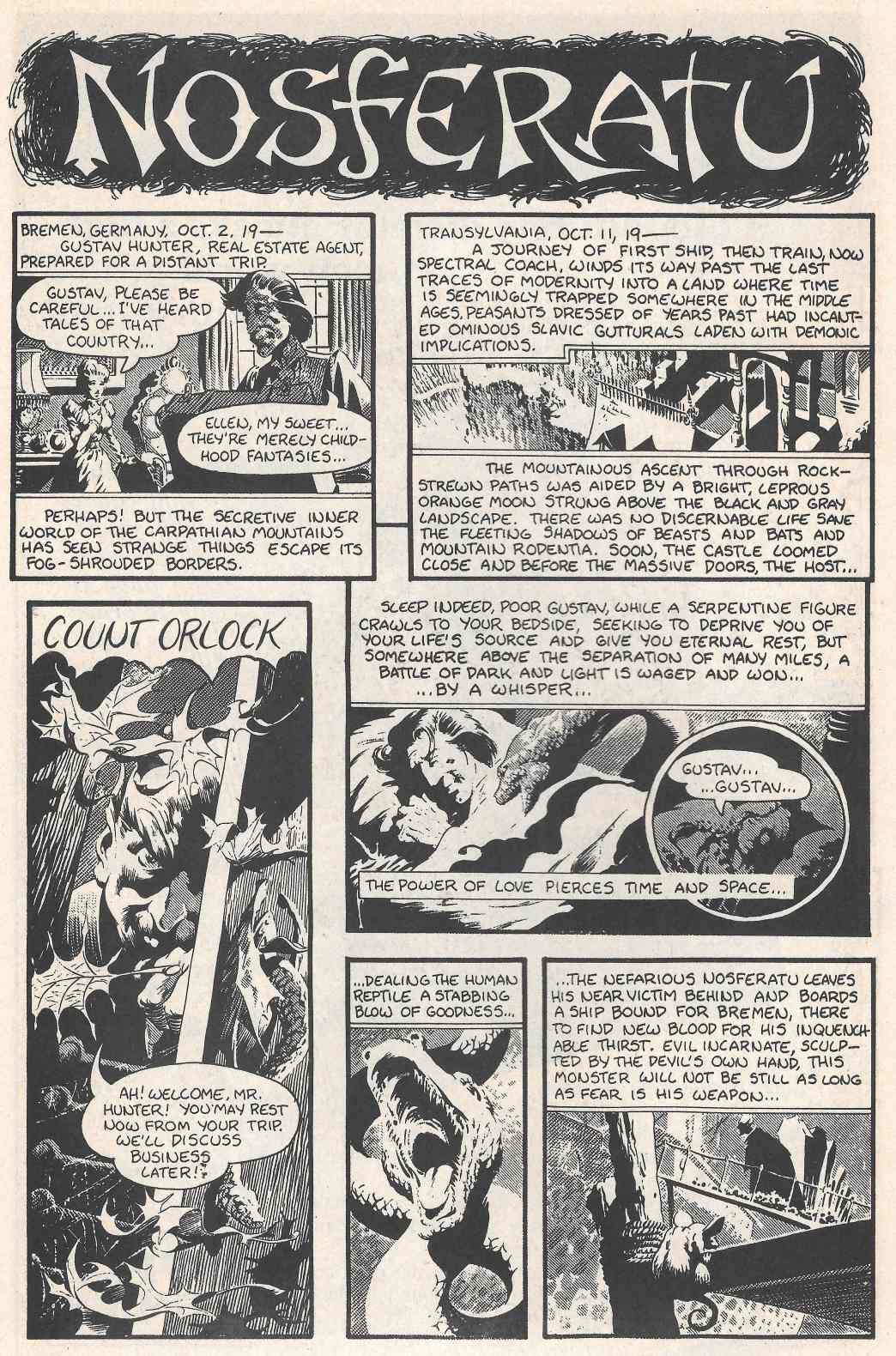 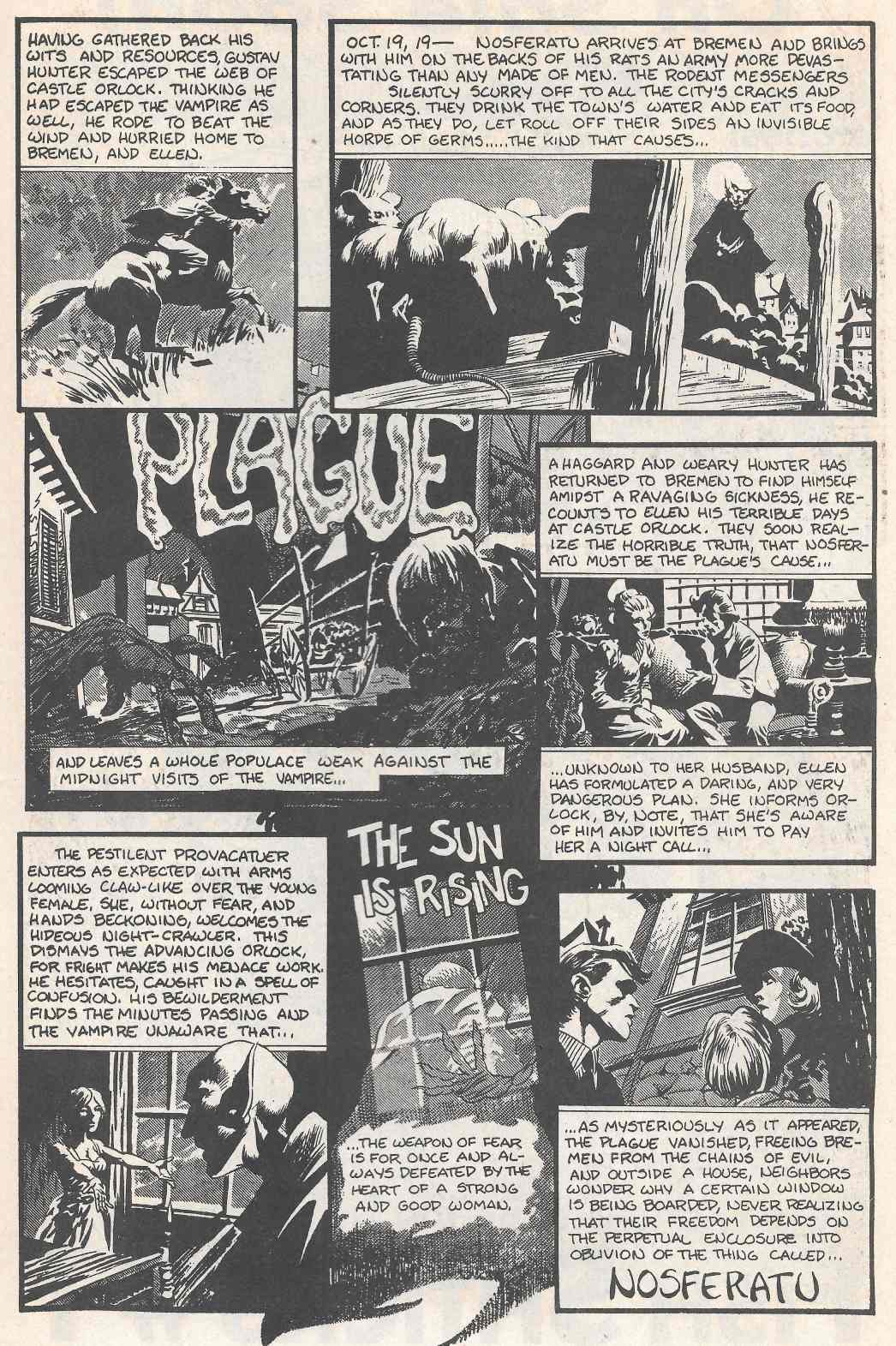 As bad as all that has come before, this is by far the most disappointing part of the book. A tale that is uncredited, but that I can see from the distinctive signature and style is made by none other than that master horror artist Bernie Wrightson. A piece steeped in atmosphere and brimming with 1970’s goodness (note the year stamp after Wrightson’s name on the first page). 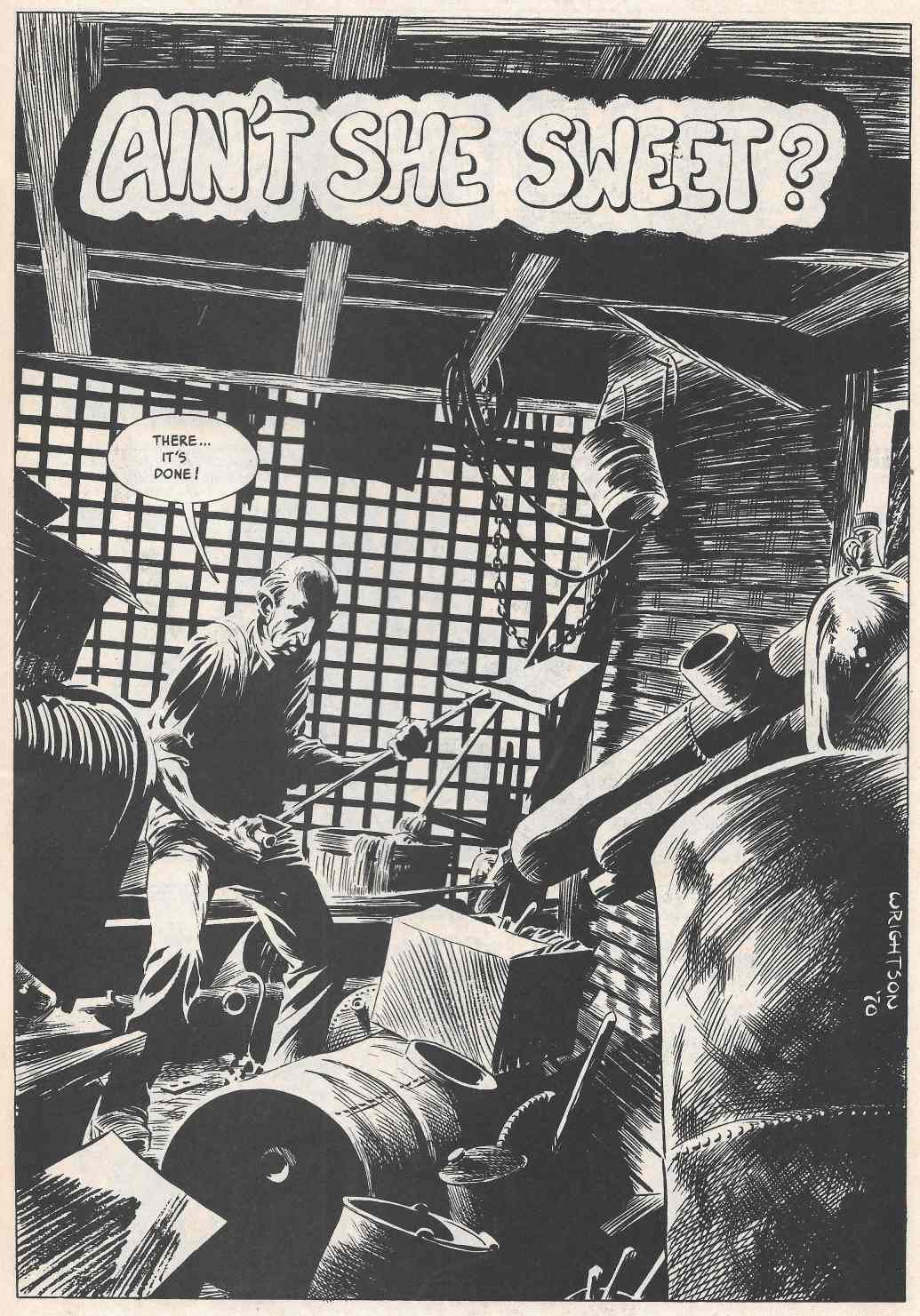 And yet, written so poorly that I don’t know what the horror is we are supposed to be afraid of nor how it ties in with Dracula.

We begin with this old man in the basement crawlspace beneath his house holding a shovel. “It’s done!” he proclaims and we can only assume he’s buried something or someone.

It appears this is George and the thing he’s buried is his ex-wife. Her ghostly thoughts appear in the top of each panel as George finishes hiding her body. She feels she will be found and George will pay for his crimes. Meanwhile, George goes back to the nursing home where they live and hangs out like nothing has happened. 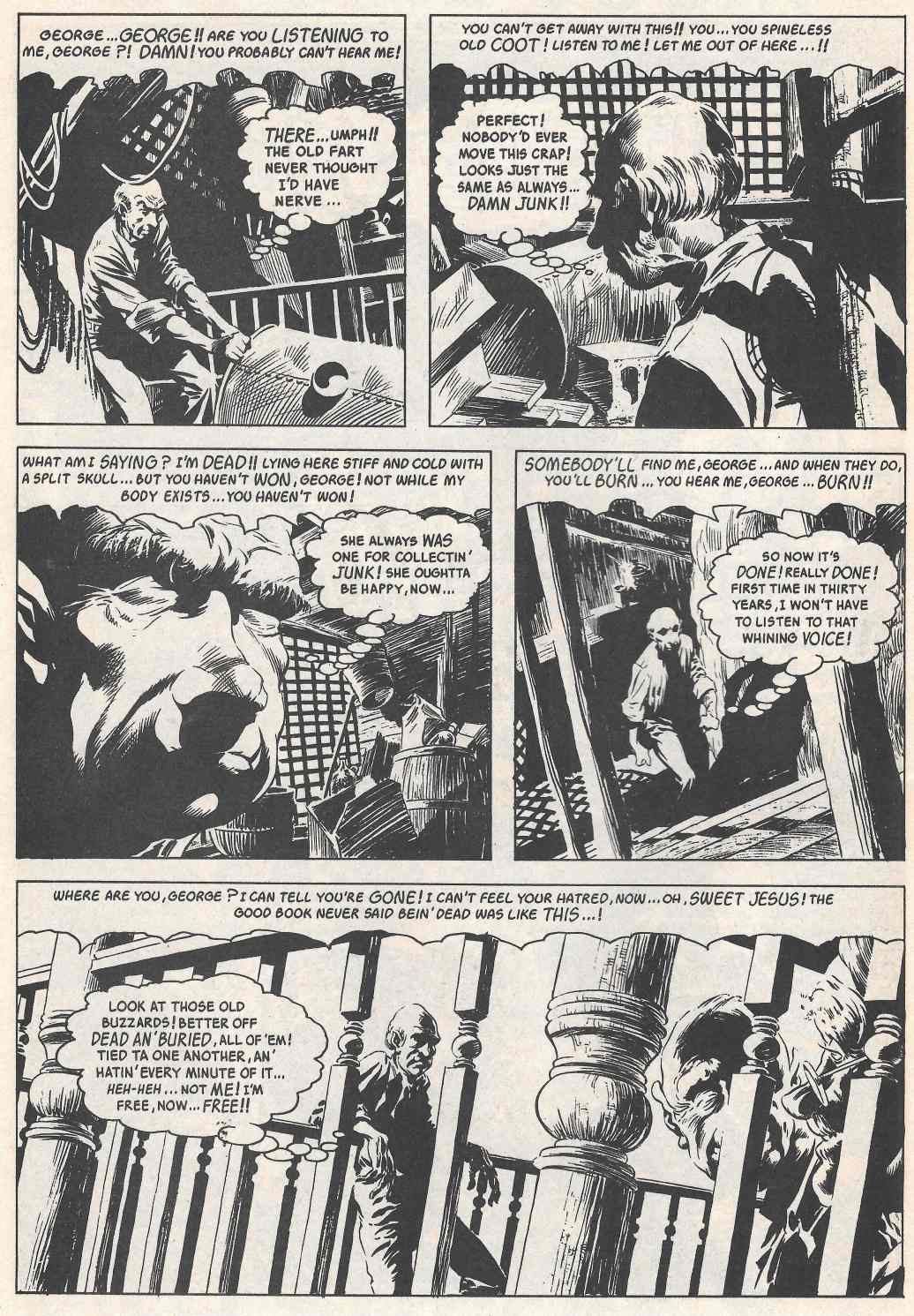 So far, this setup is working for me. 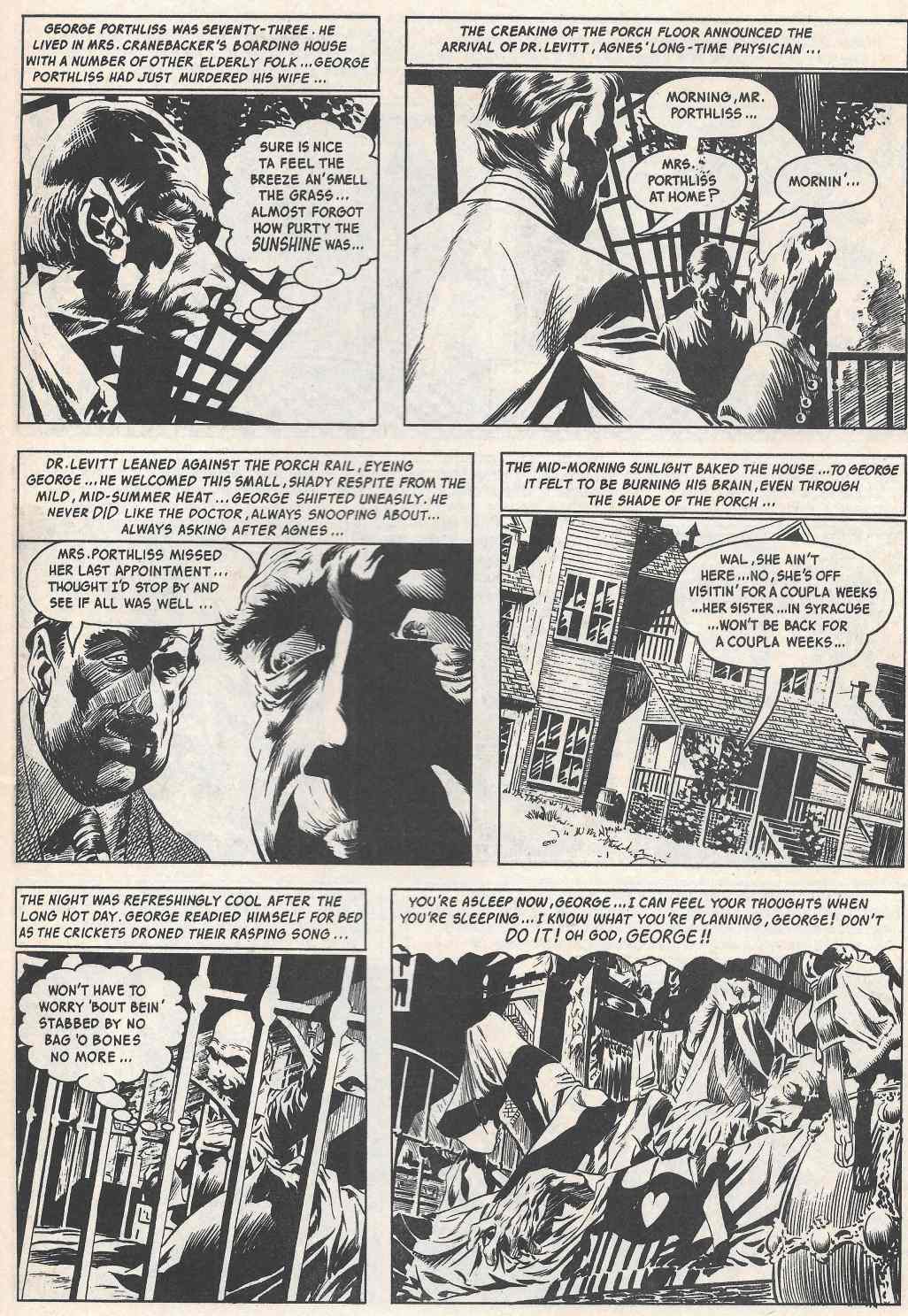 We learn a bit more about George. His age. Where he is living. That, in fact, he did just murder and bury his wife. The doctor comes around asking about her and George comes up with a cover story. Then he takes a nap and his wife’s voice-over comes back. Not sure what MORE George is going to do that the wife is worried about, however those panels are dripping with pure illustrated gold.

Now we get that George is cursed by his evil actions. His appetite is off. He gets no rest when he sleeps and that’s if he can sleep at all due to horrible dreams. Also, the doctor appears to be very inquisitive about George’s missing wife Agnes. Okay, all that’s fine. 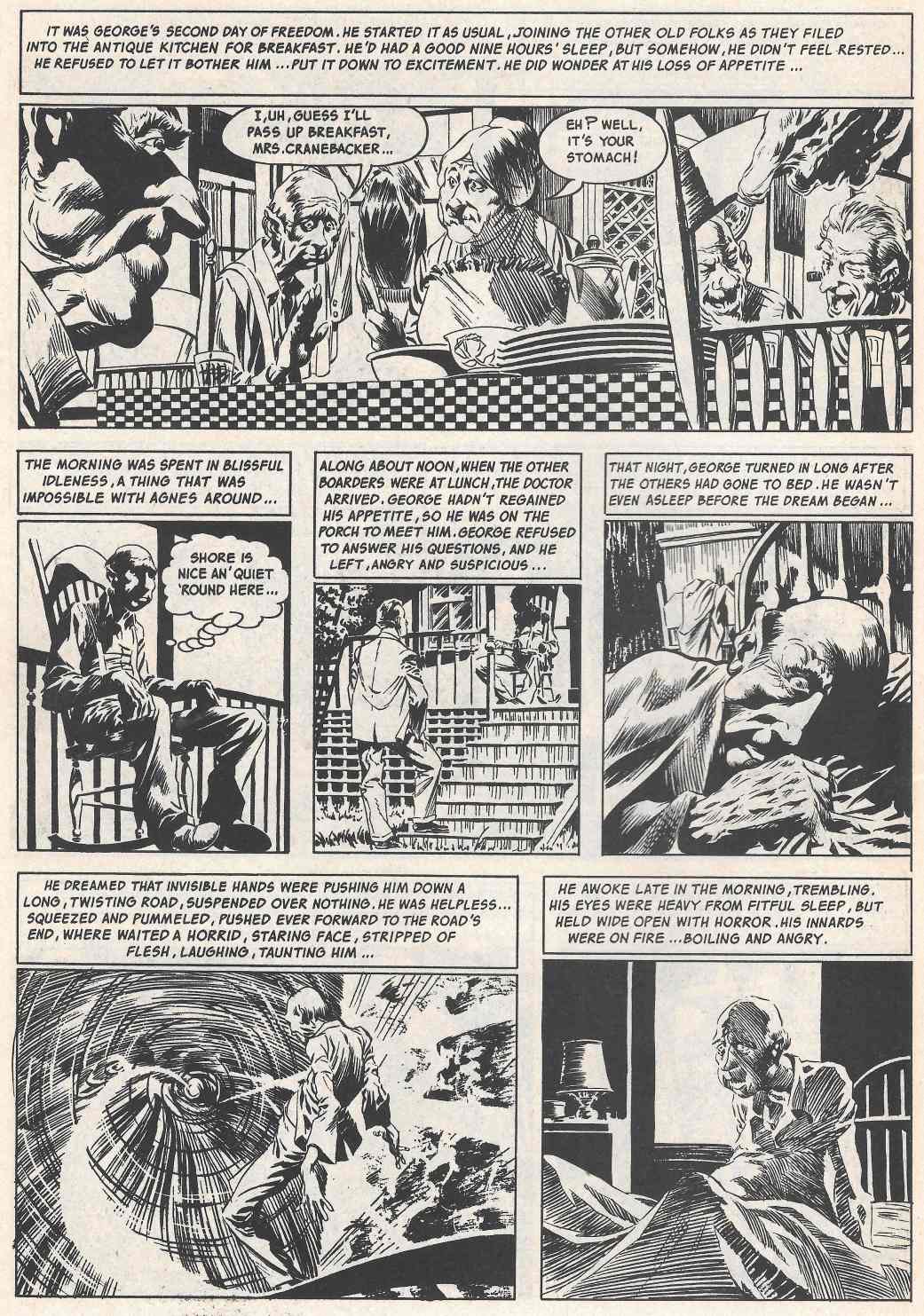 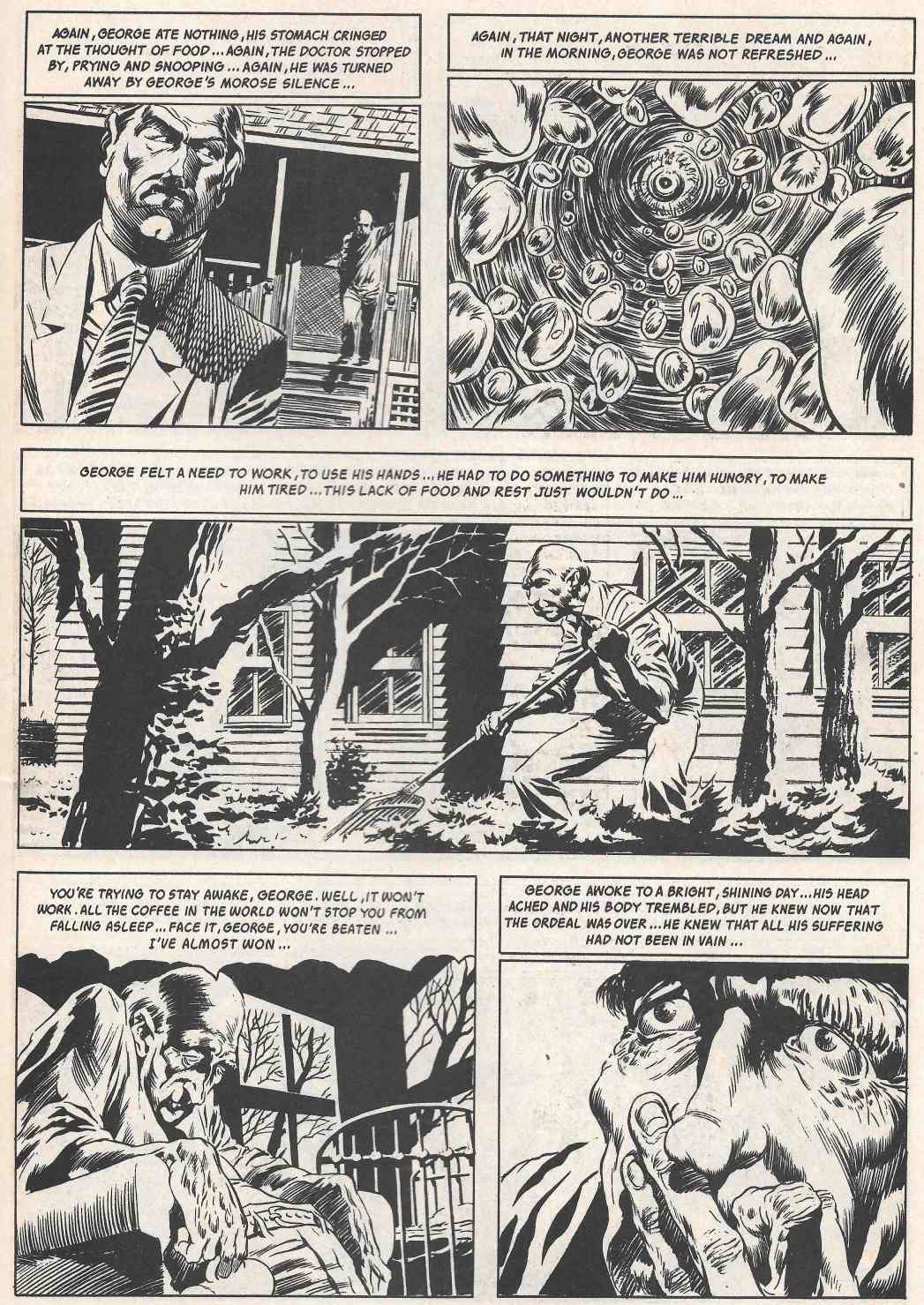 …he still isn’t eating or sleeping well, and it appears he is doing lots of chores to pass his time. Maybe in a better built up tale we would learn that Agnes was constantly after George to do this work, but that doesn’t appear to be the case. If that were the fact, then it would be ironic that George got rid of his wife only to end up doing the very things that would have caused her to nag him less. None of that is setup though.

And the doctor appears to find the body hidden next door nor their suspicious looks his way. 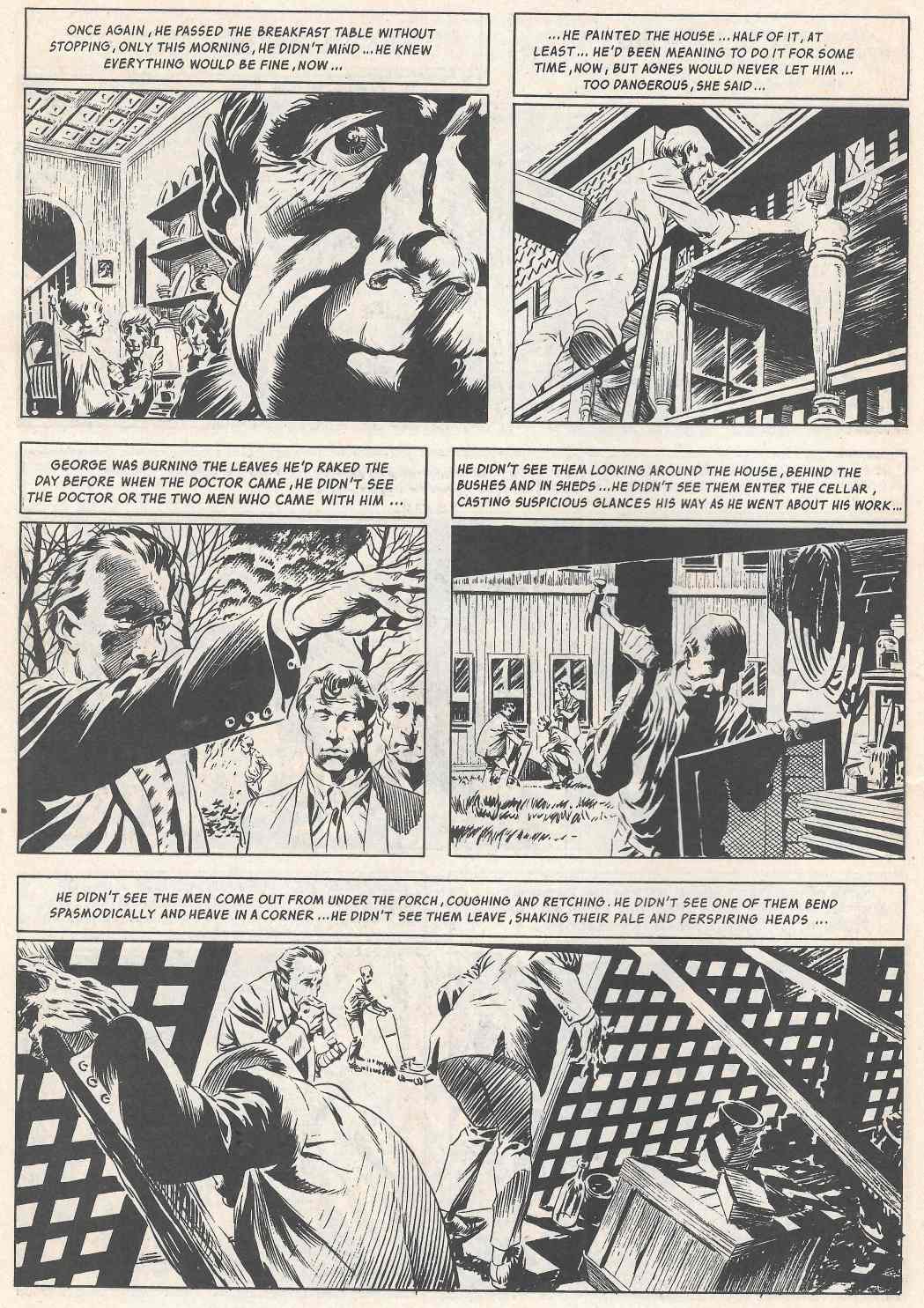 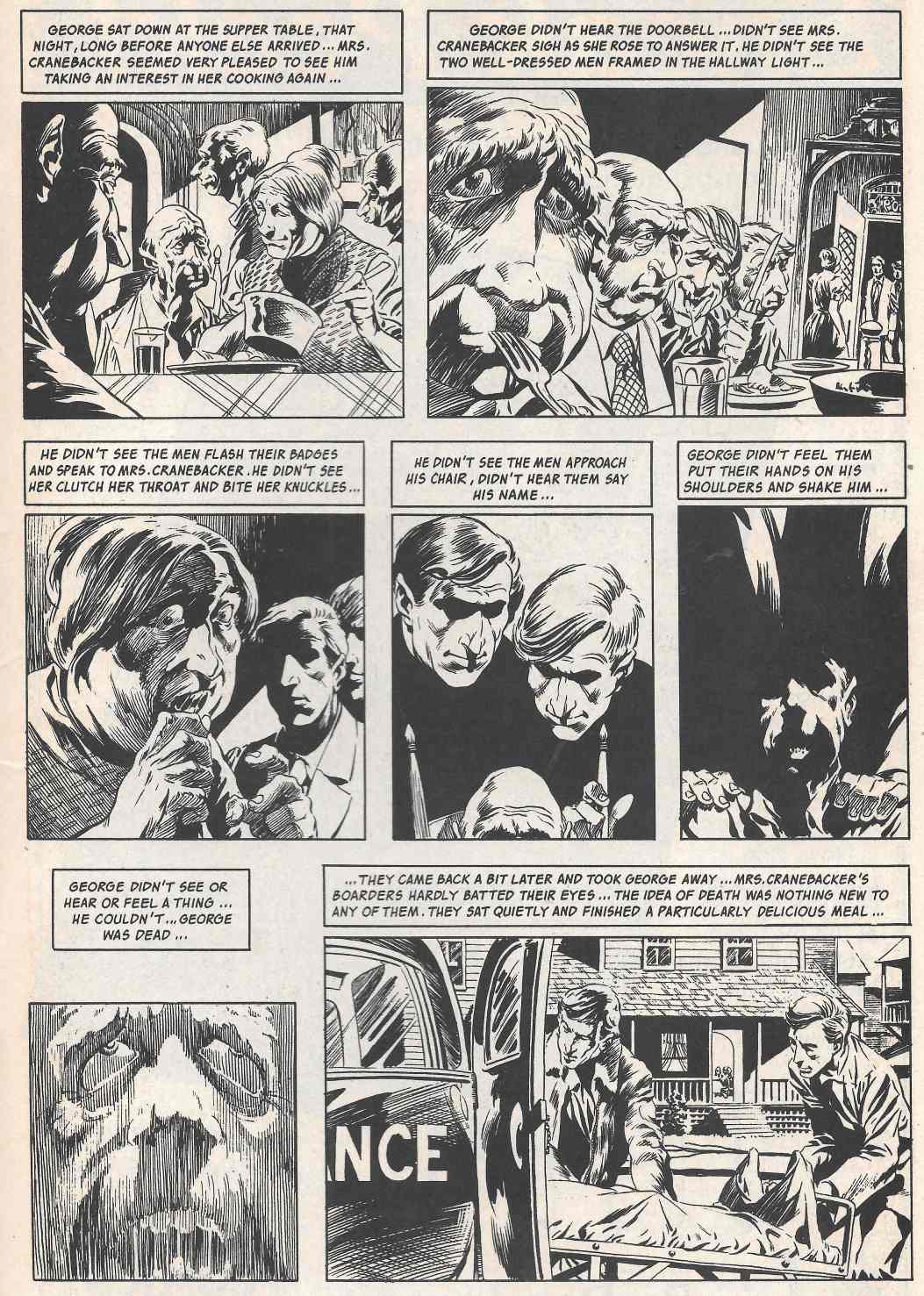 …only to find him already dead.

Uh…wait, what? Three days of torment, then he dies. What? This tale is beautifully rendered but the actual setup and payoff just don’t exist. It needed another run through writing and editing. What a disappointment.

Much like the rest of this book, it isn’t worth purchasing. Apple made four issues of this and if they were anything like this one, that was probably three issues too many. One issue of this was enough to warn me away forever. Hopefully you as well.
Posted by SonOfCthulhu at 8:04 PM