The Occult Files of Dr. Spektor #18 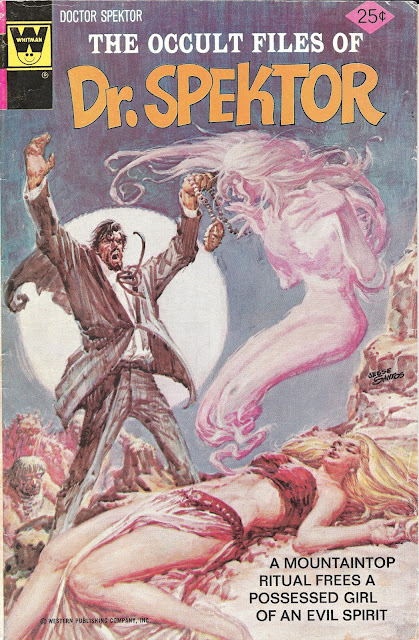 The OTHER Doctor S with an ongoing supernatural series

Here’s a surprise I didn’t expect. When I picked up the Dr. Spektor book I was expecting an anthology title. You know the kind where Spektor is a floating head introducing you to three or four tales from his occult files that are really just a framework to hang short horror stories off of.

But color me surprised, the book is a full length tale about the occult master Dr. Spektor and his hot lady friends who get involved in all sorts of supernatural trouble. I wasn’t expecting that at all.

Dr. Spektor was introduced in a 10 page story in July 1972’s Mystery Comics Digest #5. He was spun out into his own title the following year in May and his title enjoyed a healthy 24 issue run, ending in February 1977. He also had a job sidelighting from 1975-1976 as a linking head narrator (like I was expecting here) for the title Spine-Tingling Tales. His title got both Gold Key and Whitman covers, owing to how those publishing houses were operating at the time. He received a one-shot issue number 25 reprinting his first issue in 1985 still under the Whitman masthead. In 2014, Dynamite Entertainment release a new Dr. Spektor title by Mark Waid and Greg Pak as part of the Gold Key revival.

As for the character himself, Doctor Adam Spektor is an occult investigator who deals with all manner of supernatural threats including mummies and vampires. He is typically aided by his attractive Sioux secretary Lakota. While non-powered, he is very knowledgeable about the lore of the paranormal and these usually see him coming out on top. His adventures had him crossing over with other Gold-Key / Whitman characters such as Tragg, Durak from the Dagar series, Doctor Solar, and The Owl. I was a bit astonished to find the Gold Key/Whitman titles so interconnected.

We begin this adventure, titled “Masque Macabre”, with Lakota looming over the good doctor baring fangs and speaking with a decidedly mid-European accent. It startles Spektor so much that he jostles his java all over. 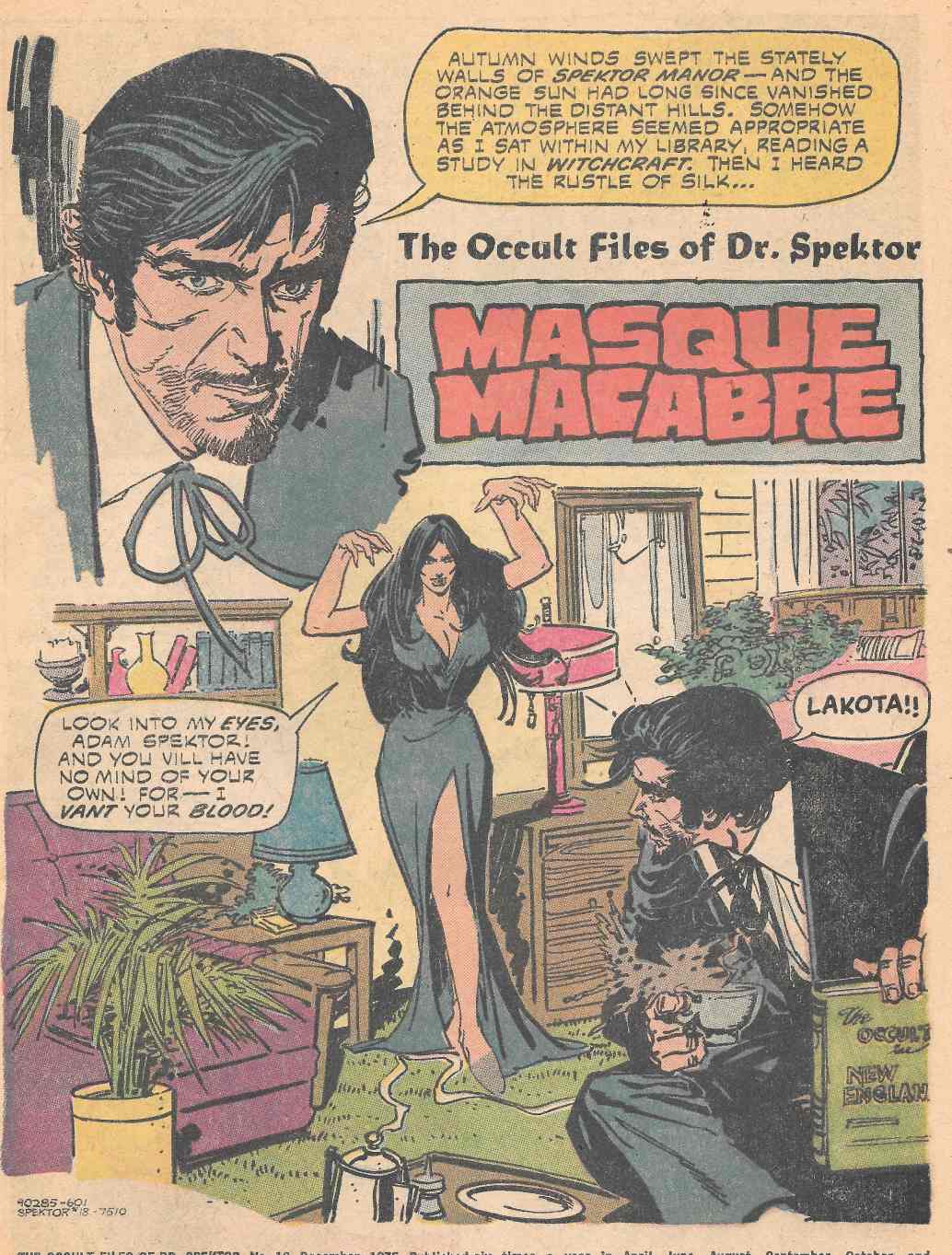 But Lakota’s vampirism is a just a little joke (makes me wonder if the issue before this was a vampire one) and we go on to setting up the story for this issue. The Doc, Lakota, and his cousin Anne are going to a town called Rutland that practices a bizarre festival that has origins in the supernatural and black arts. Sounds like fun, right? Have I mentioned each issue he gets involved in dangerous mystical adventures? 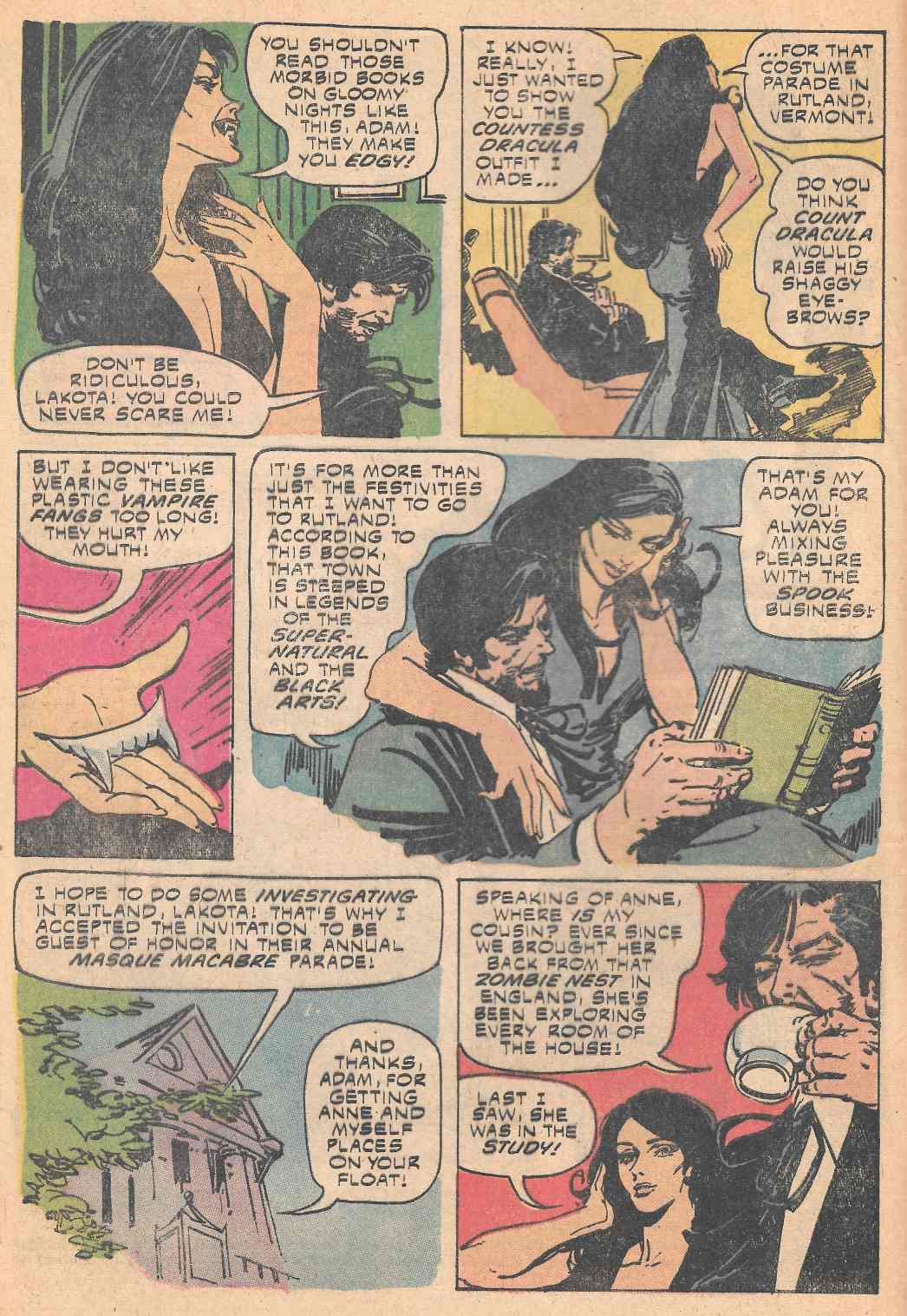 Seems like the festival will have a Halloween type vibe with lots of dressed up locals. The trio travels are abbreviated and once they arrive in Vermont, they waste no time in getting to the festivities. 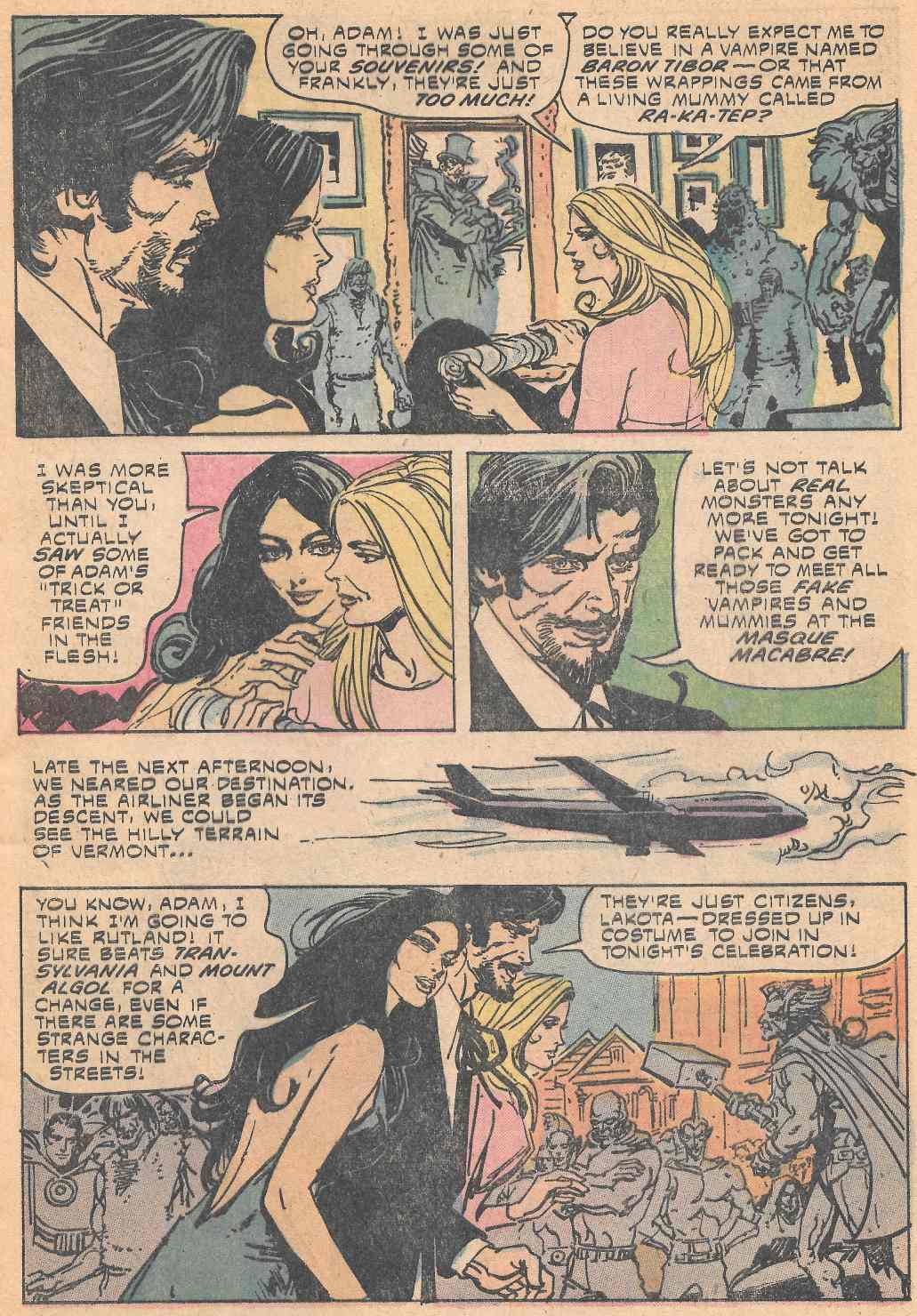 There is this one worrisome event: one of the floats is dressed up with statues honoring some of Doc Spektor’s past foes, and a few that he has read about in his occult journals but not yet encountered. If this feels a bit Scooby-Doo-ish, I’m right there with you. 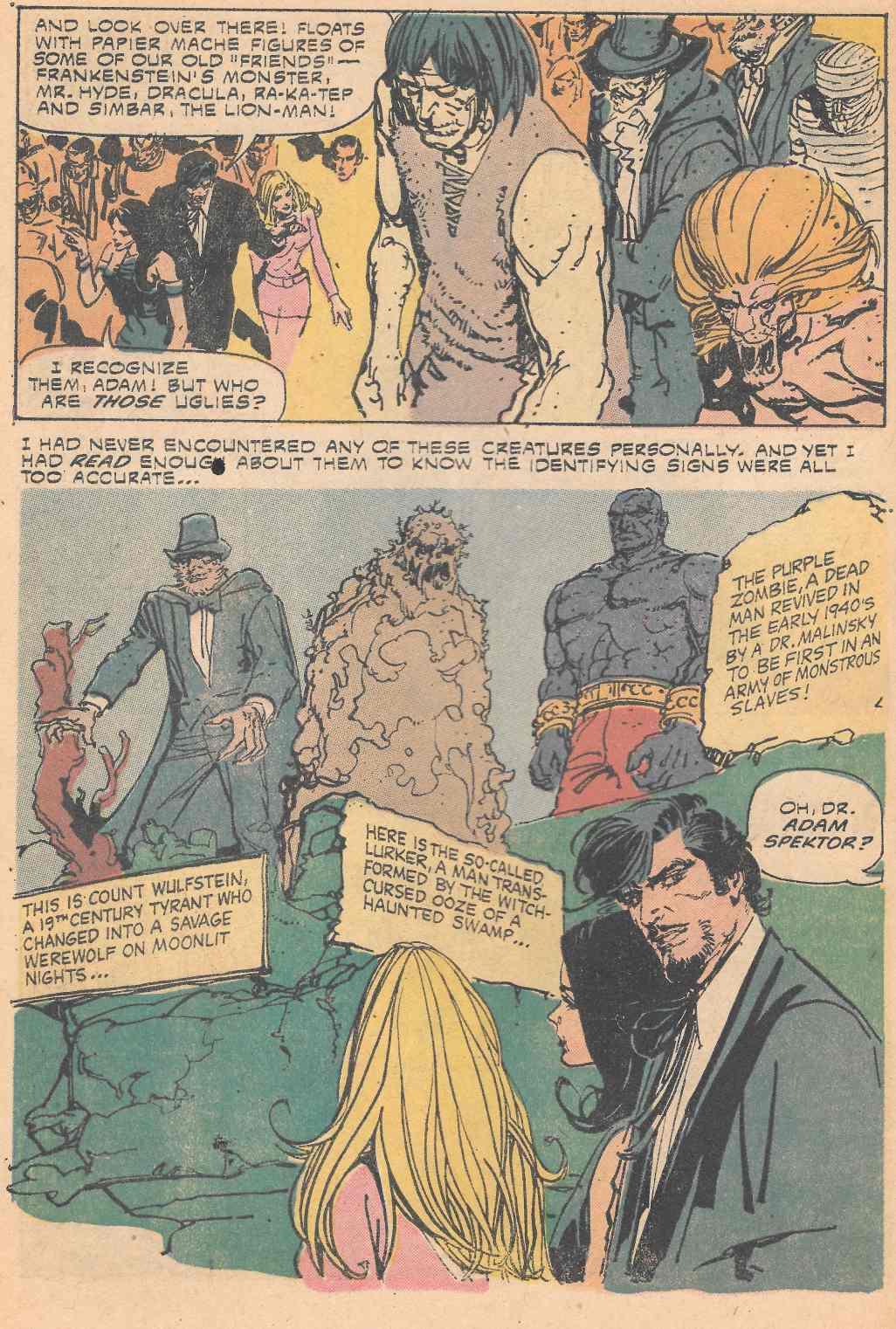 And to complete that vibe, here comes a creepy old man asking to take Anne away so she can get into a “special costume.” Who does this, people? Worse yet, Anne wants to go with creepy. And Adam, sensing nothing is off about this, lets her. 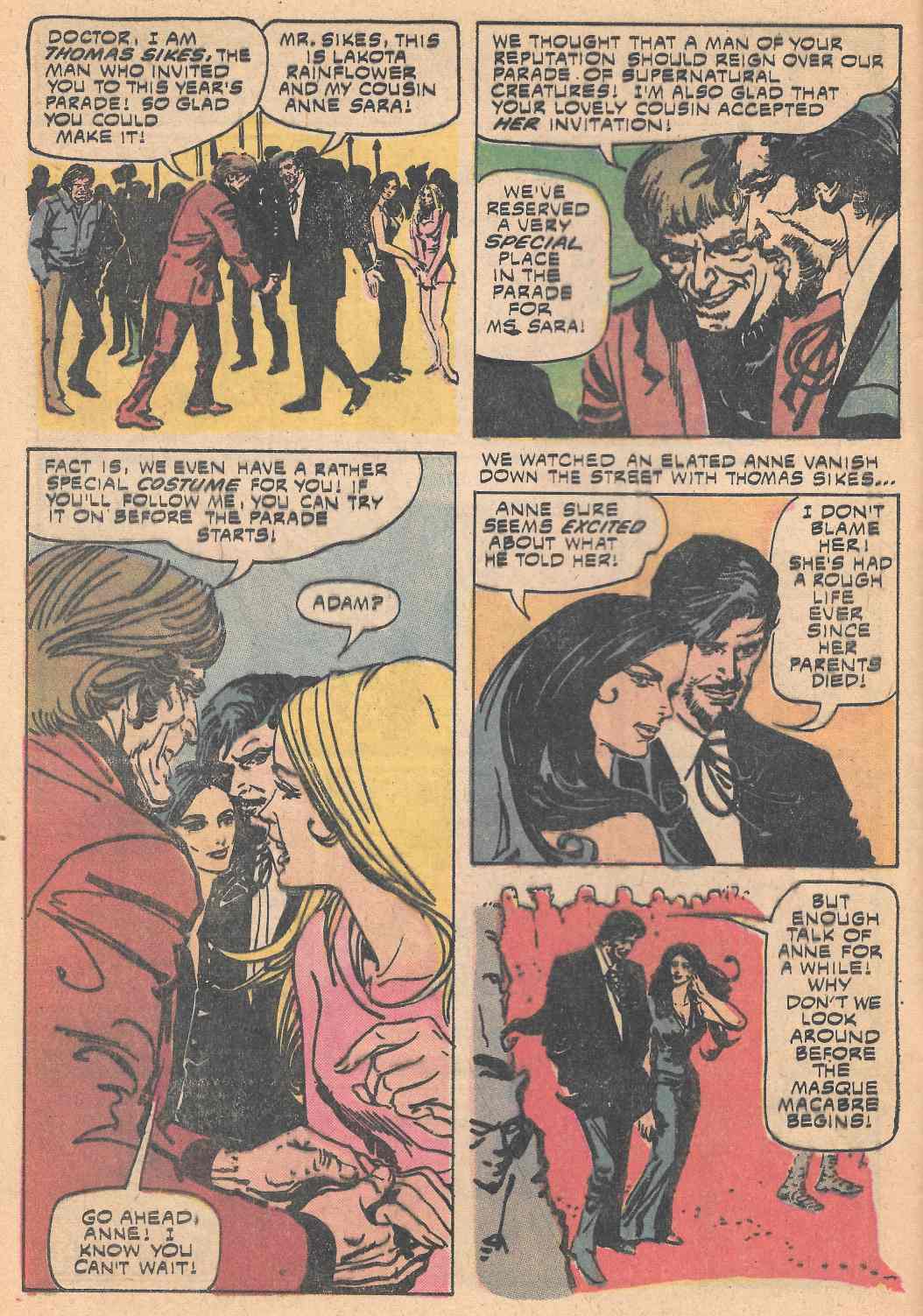 So, when Mr. Sikes leads her to the basement of a weird house on the far edge of town while talking about having a cult of robed strangers called the Brotherhood down there performing strange ceremonies by candlelight…OH! And admonishing her to just “go along with” whatever they want her to do…I’m saying this book is pretty transparent at this point. 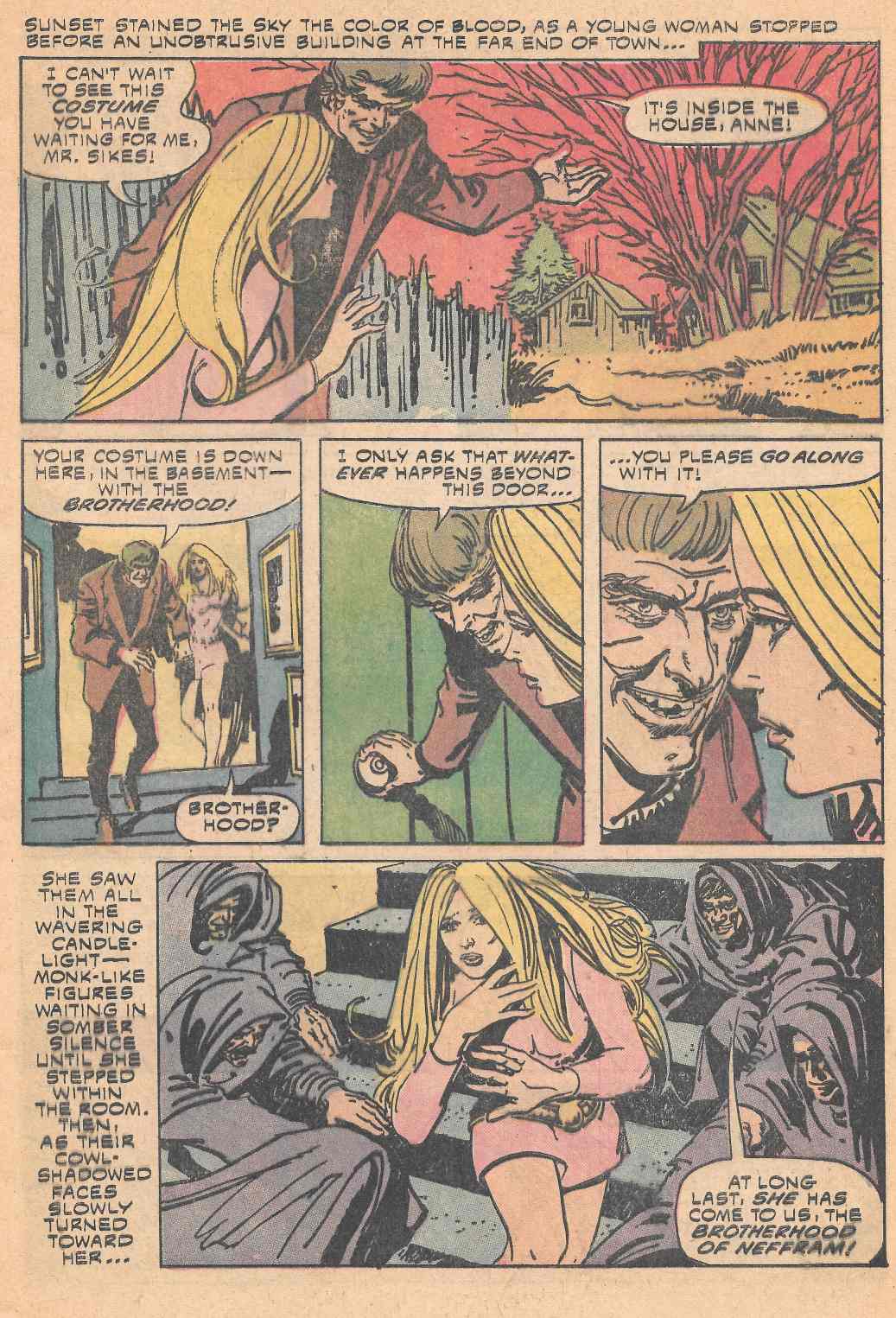 Instead she changes into a very revealing costume with a mystical neckless and asks to be possessed by the spirit of a dead sorceress named Princess Neffram at their directon. Not a smart move. 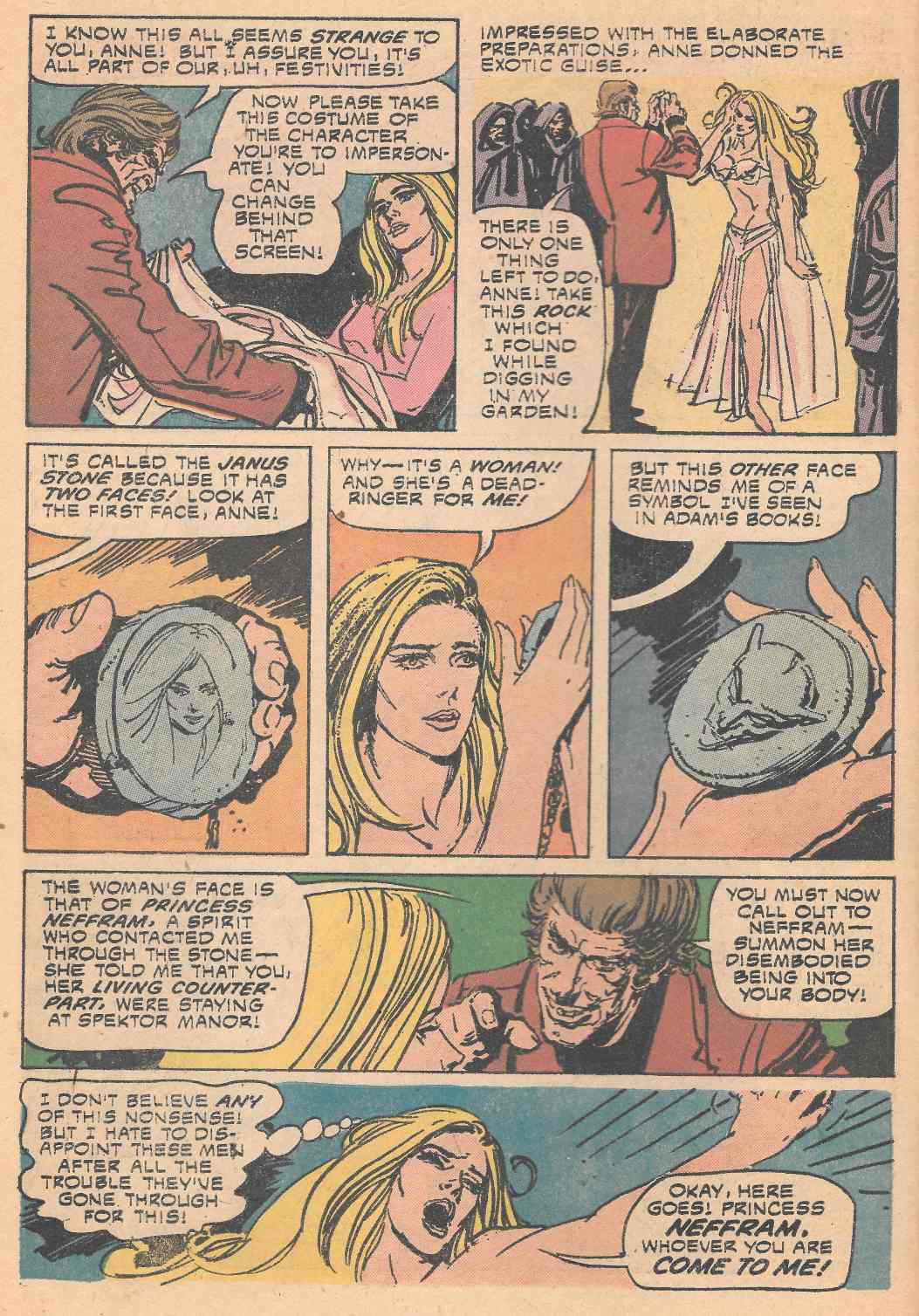 Because of course the likely thing happens and she now needs an exorcism. First she’s going to have a go at completing Princess Neffram’s great plan, whatever that is. I bet it bodes ill for Spektor and Lakota. 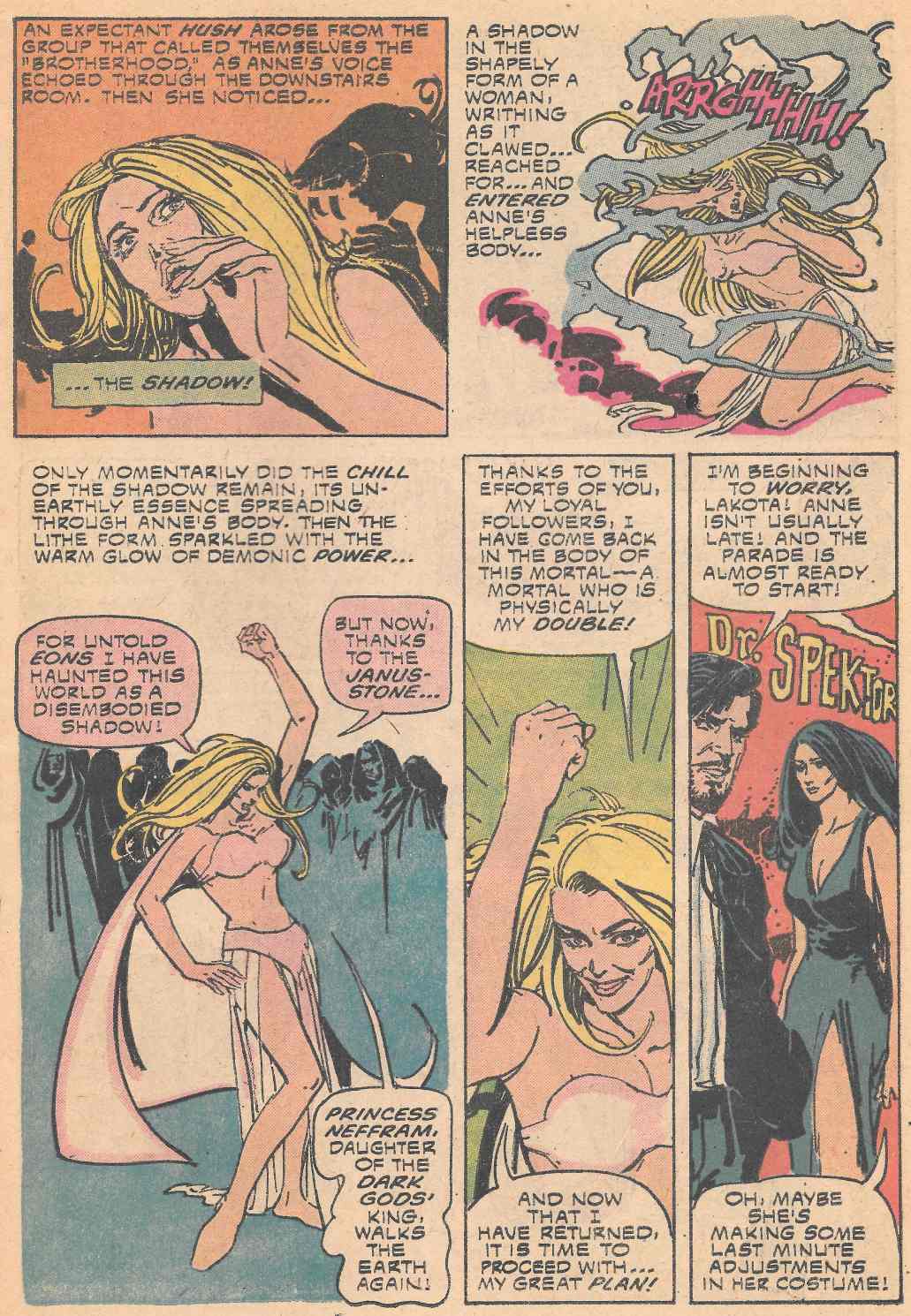 Speaking of the pair, they are patiently waiting for Anne to make her appearance. They even ask Sikes when she might be along. Course the new “Anne” wants to make a spectacle of her appearance. 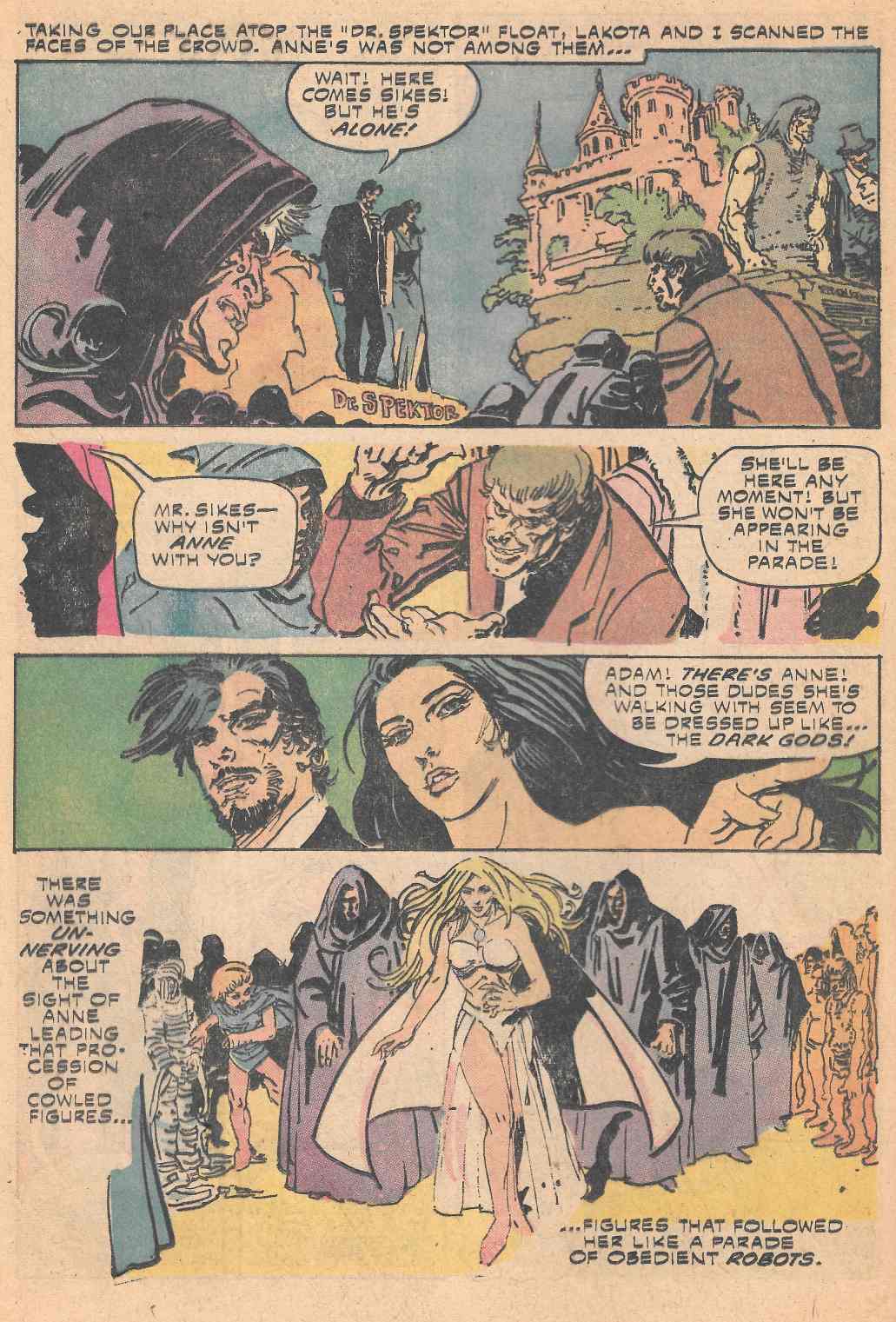 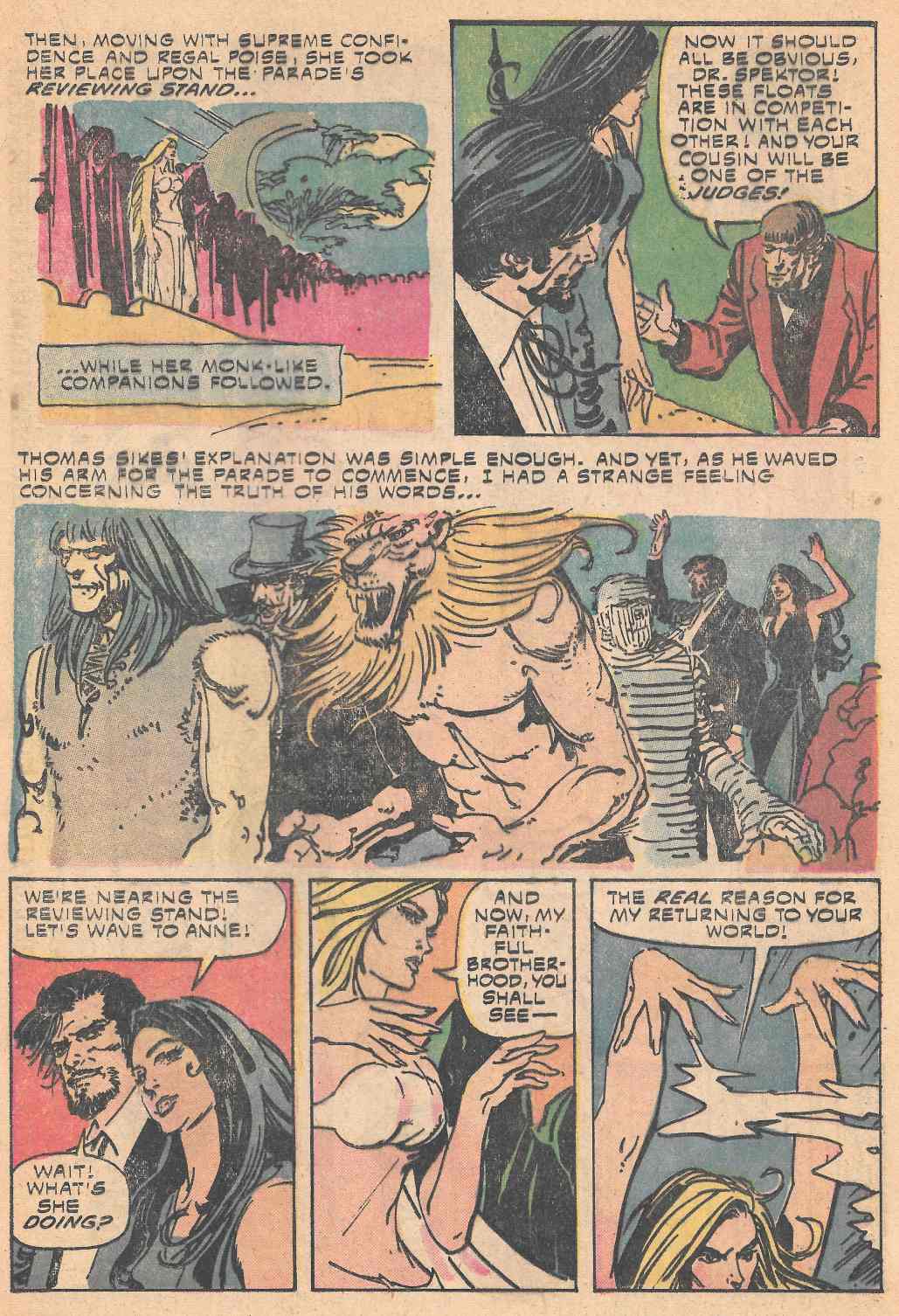 …but it quickly becomes apparent that something is amiss. I mean, unless statues of monsters coming to life is a normal thing. 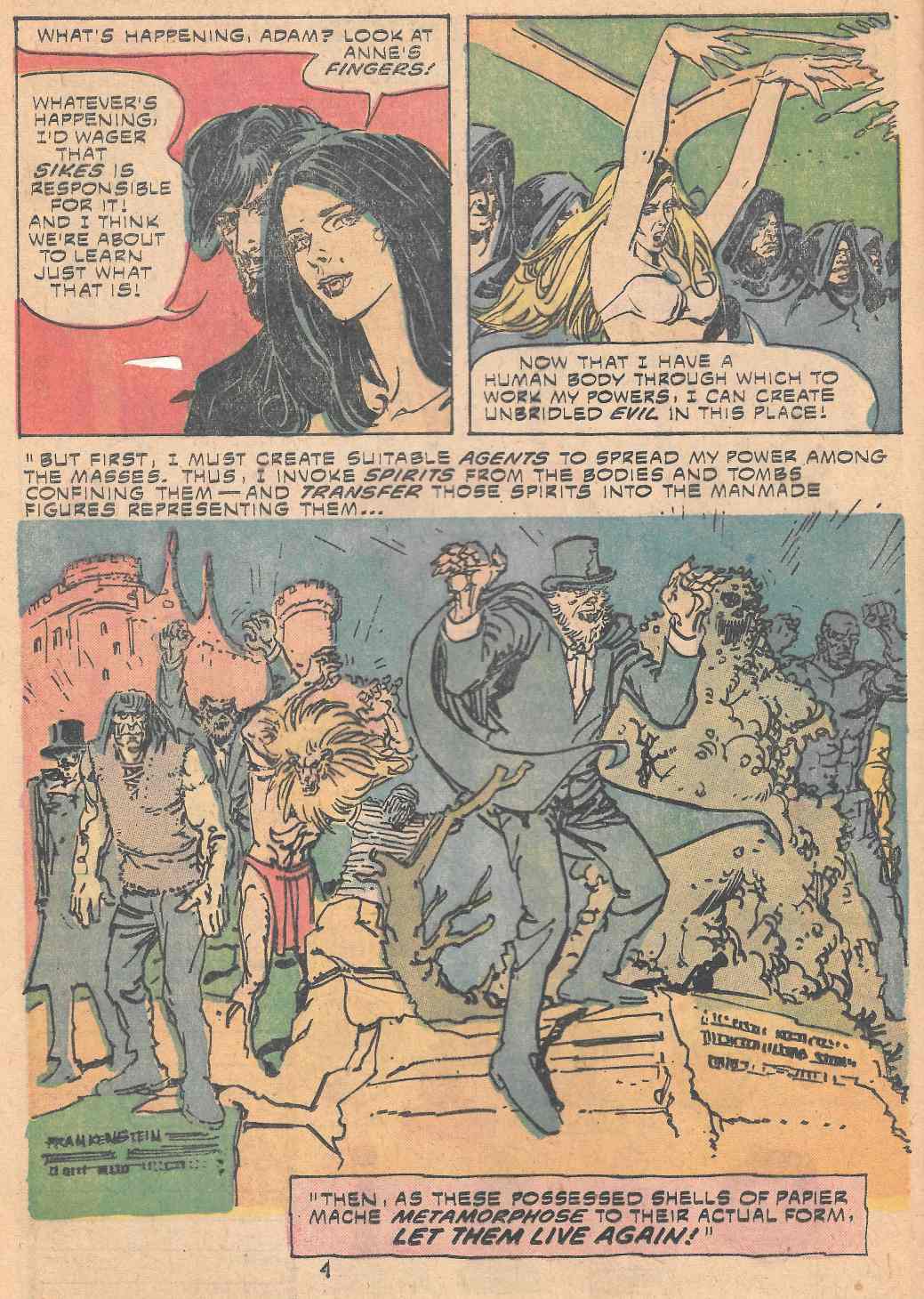 These quickly attack our heroic pair. I love how they are knocked down in that second panel and talking about how they are just scratched up by the attack. “Try not to move” as Spektor’s big play here is funny as well. 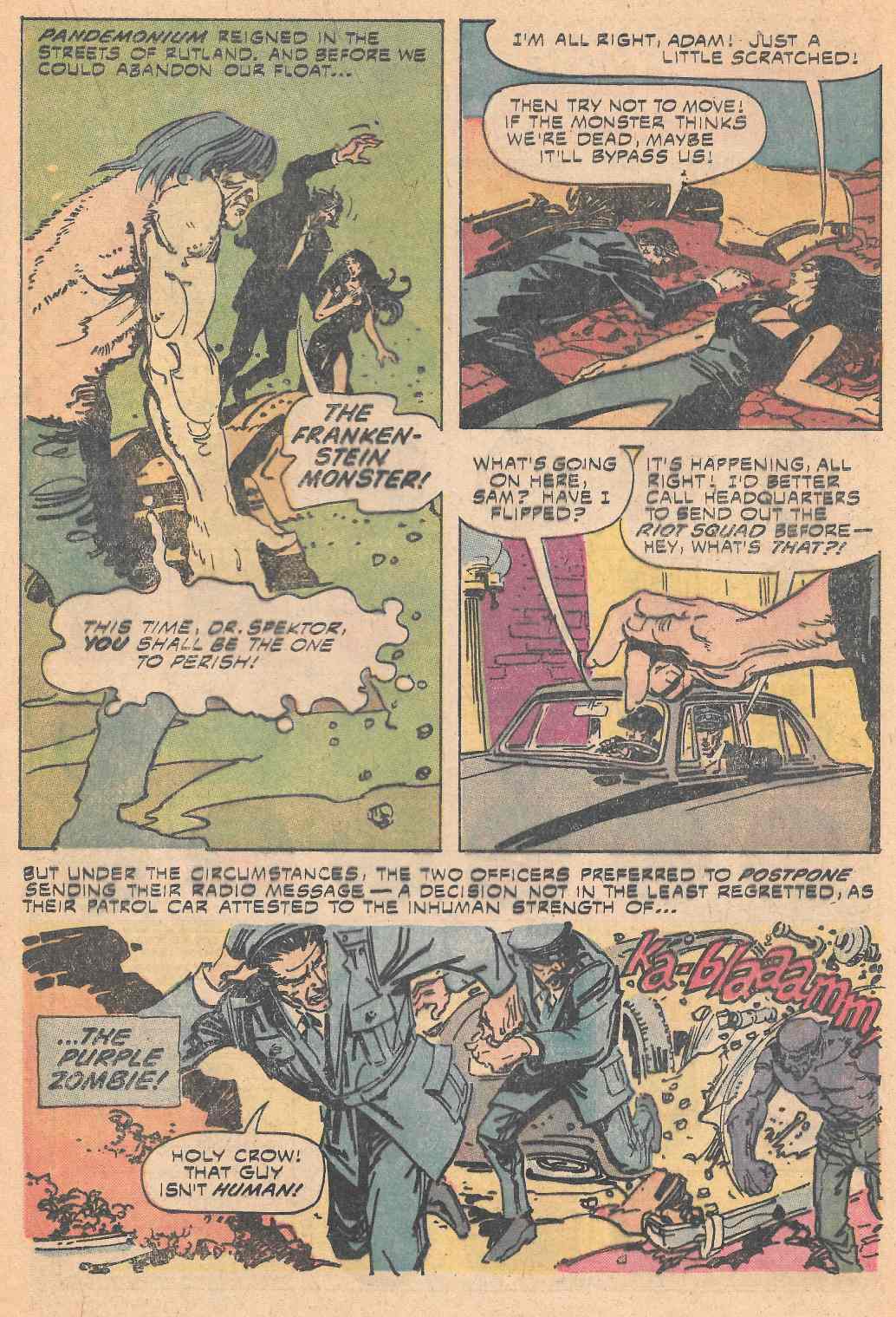 And that might be a good tactic, as standing up to the monsters ends up with you becoming a zombified slave of the Dark Gods. Of course, Spektor knows that because he’s the bomb-diggity when it comes to occult stuff. 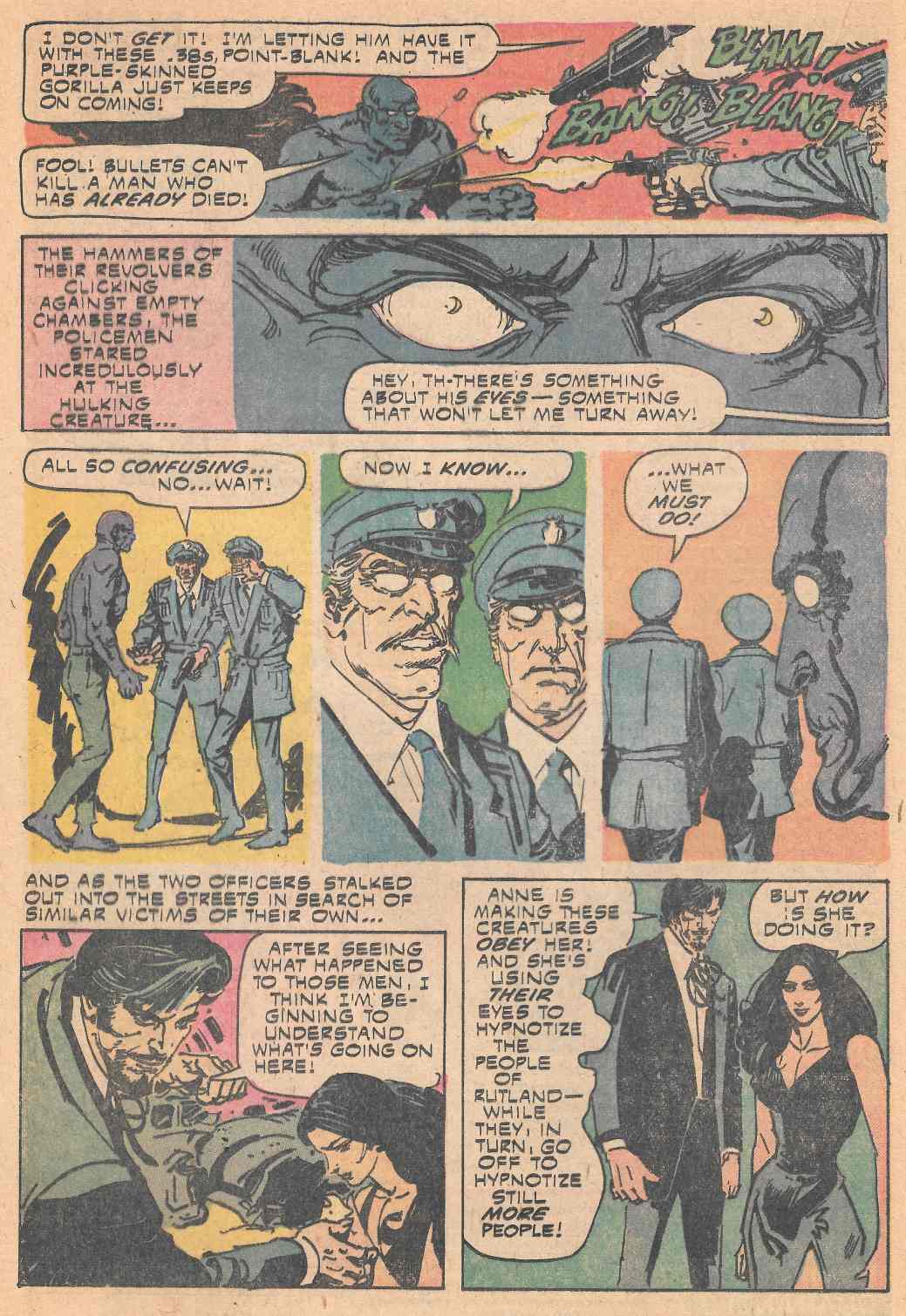 There is a neat page of the doc’s enemies getting all in the face of regular residents dressed up like other heroes in the Whitman/Gold Key line. I’m certain that Santos had a blast coming up with these panels. 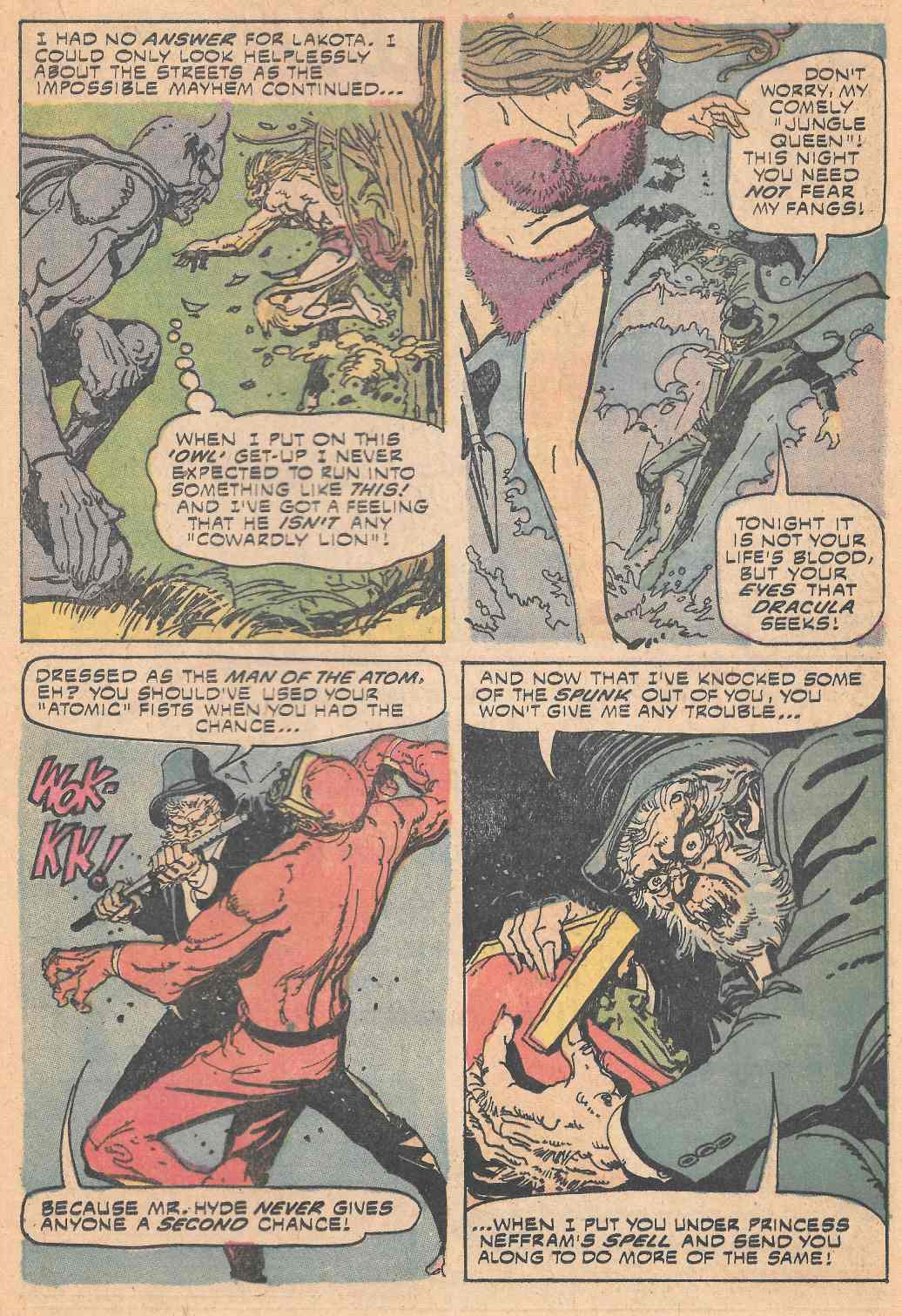 Spektor meanwhile has decided that the best way to end this matter is to confront Anne head on. Unfortunately, that puts him smack dab in the middle of her monster mash. 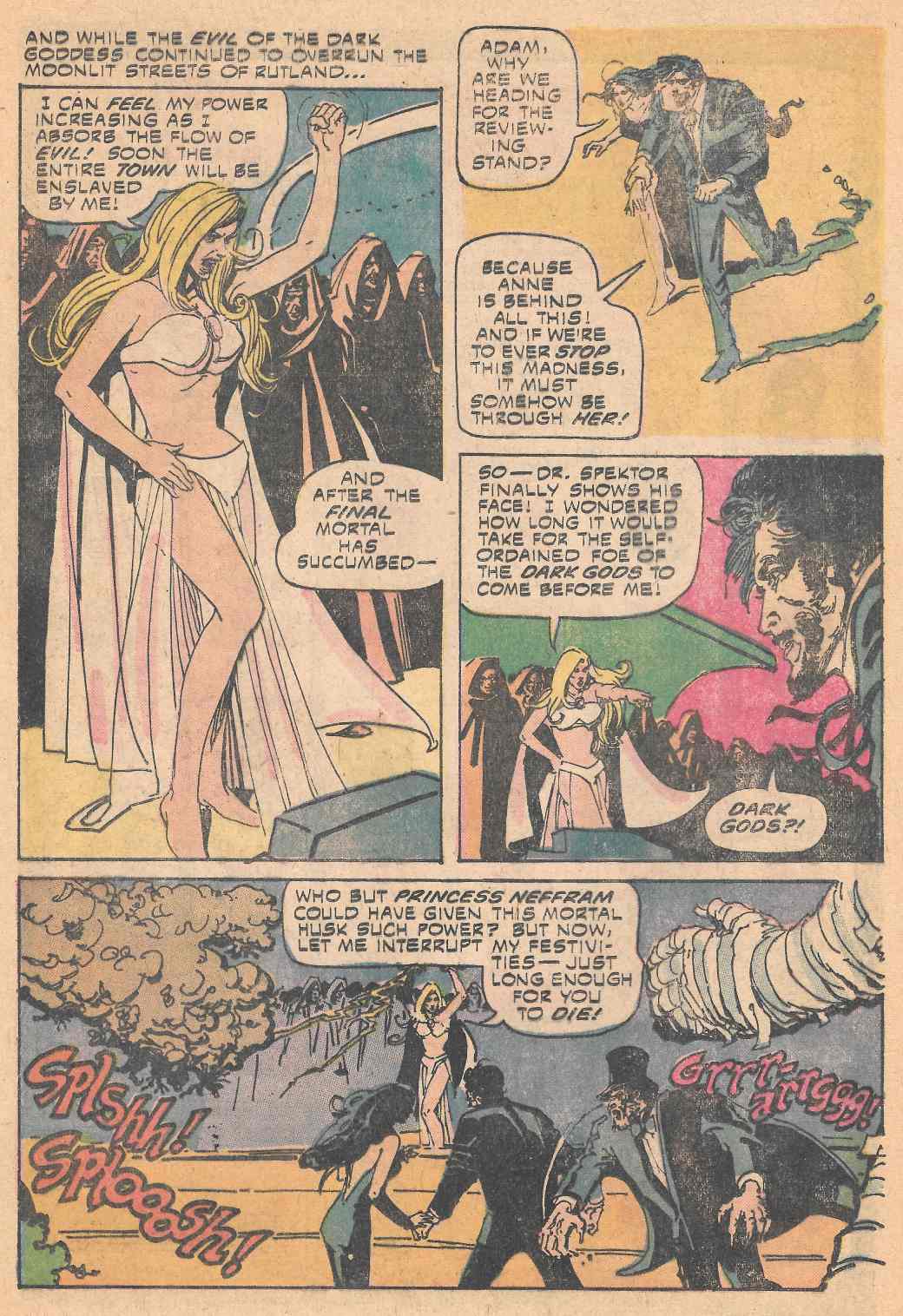 Meaning that he and Lakota have to outwit her muck-monster Lurker, which almost does doc in. 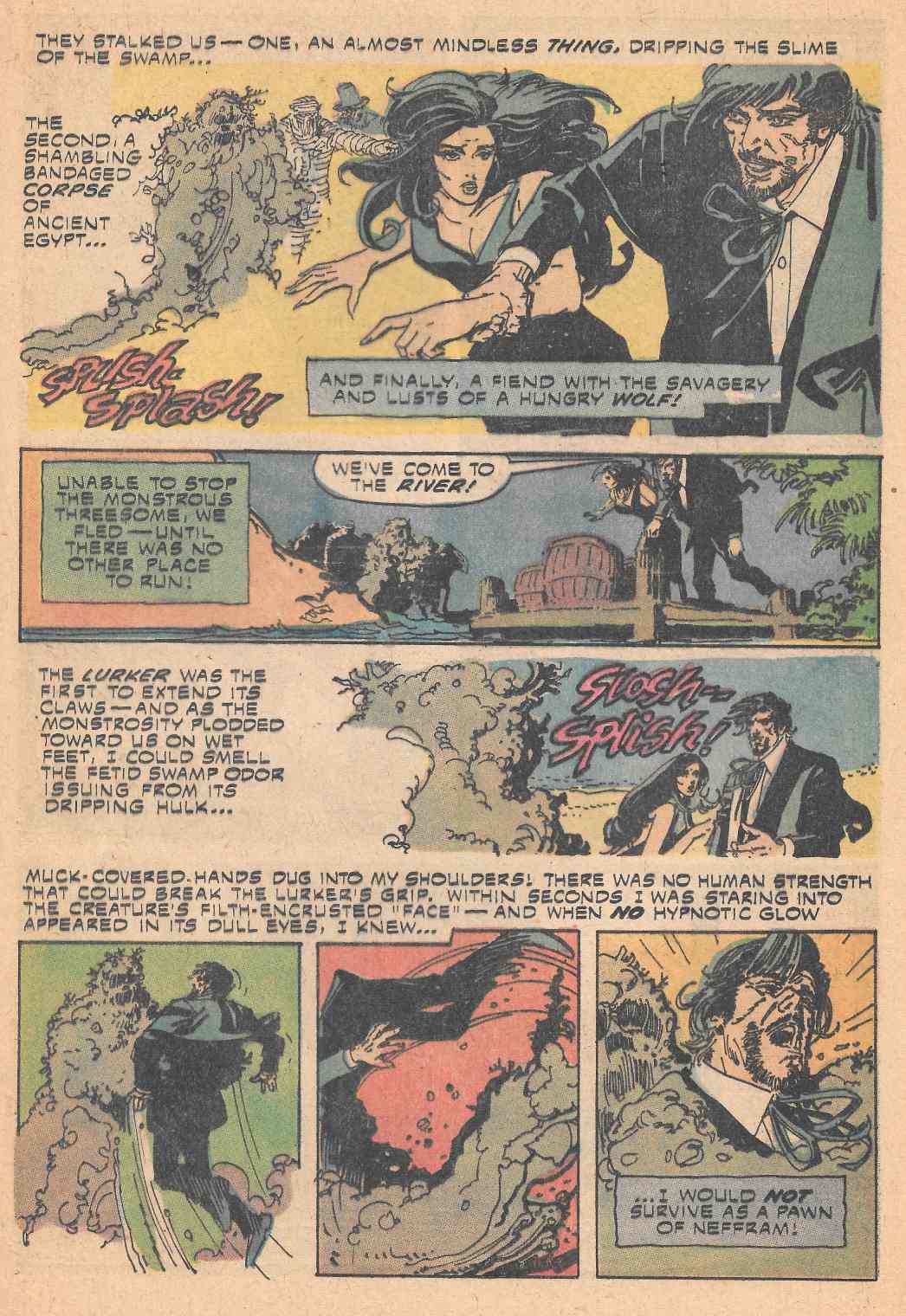 …until Lakota gives him a kindly assist. It unfortunately lands her in the drink for her efforts and the doc is still in the clutches of a dynamite covered pile of goo. 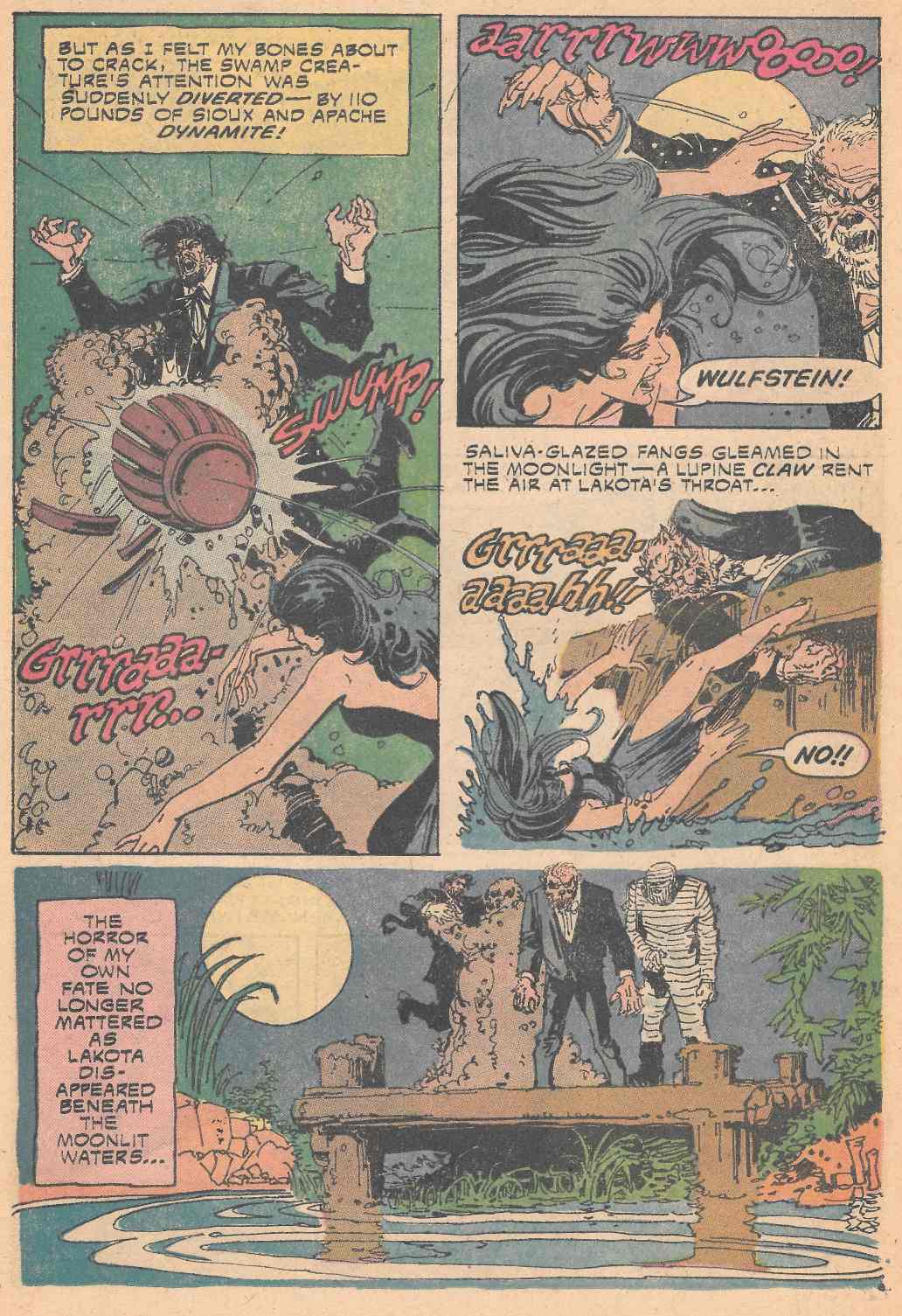 But Lakota survives her dunking and the doc is lead back to Anne. He recognizes the Janus-Stone right away and yanks it from Anne’s neck. That appears to have no effect, however. 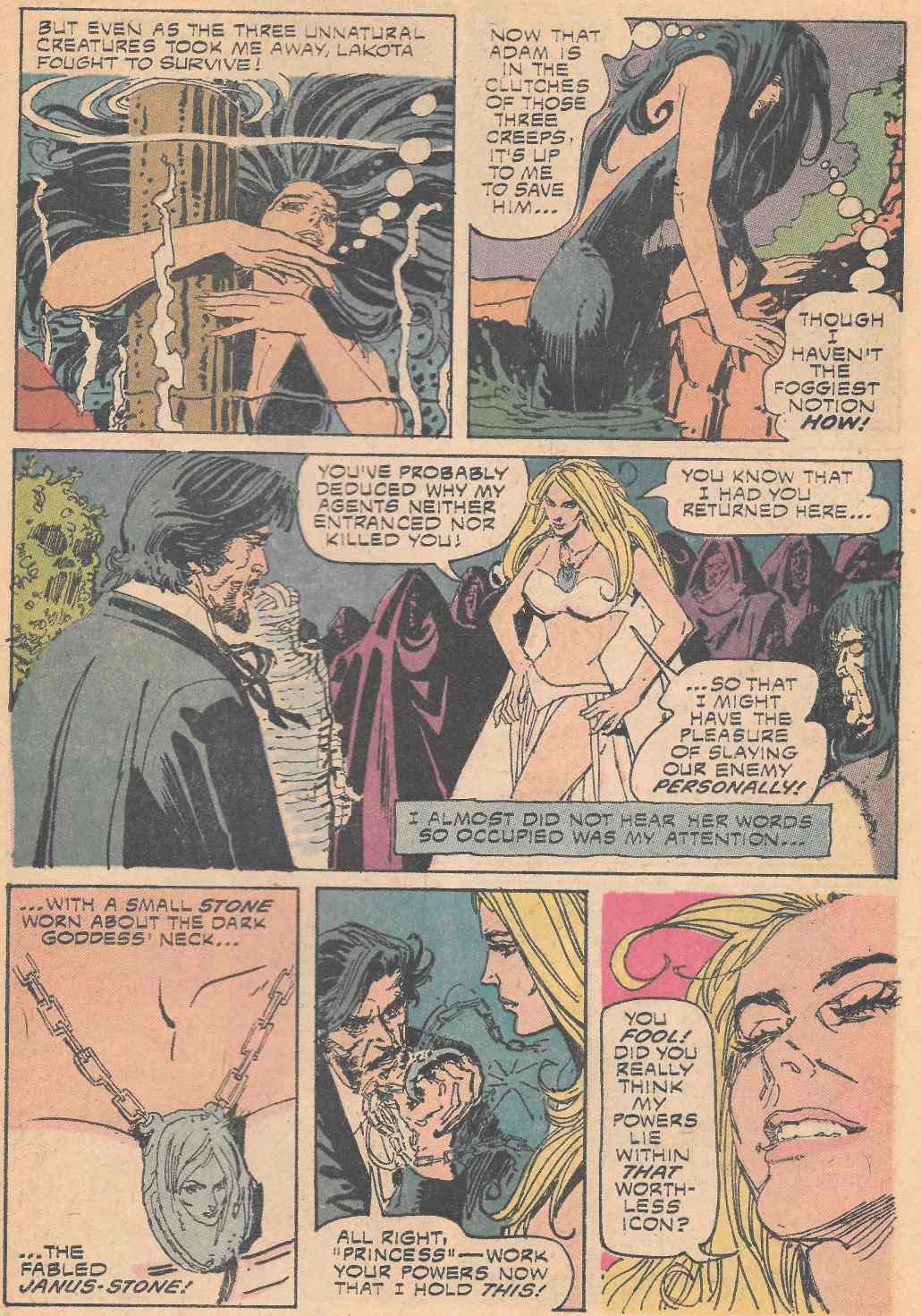 Or it doesn’t until Spektor presents the back side of the stone to her showing the image that is like Anne. Then Neffram gets all confused, giving Lakota an opening to clock her one with a branch. 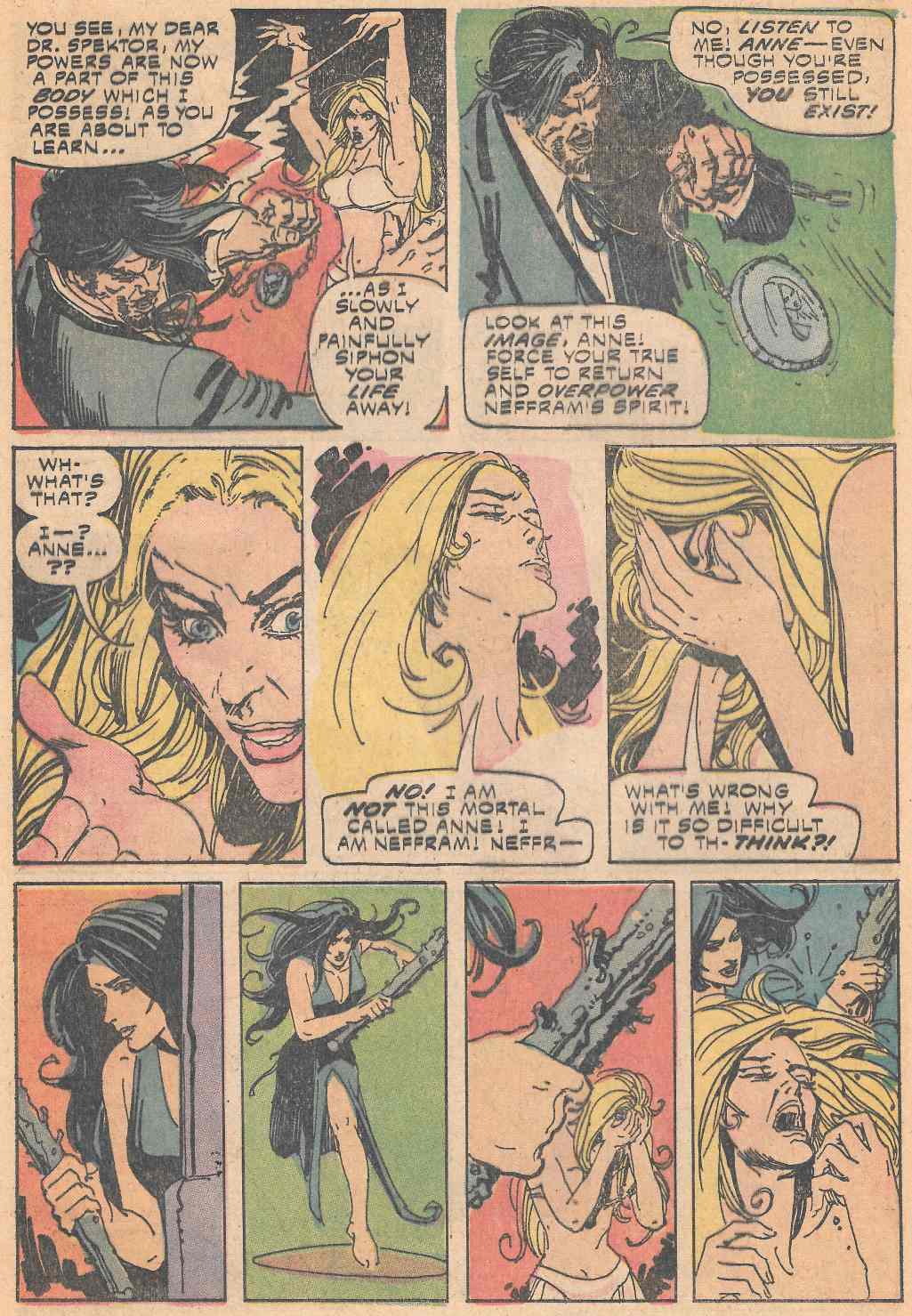 Which ends the whole debacle. Once Neffram is konked out, everyone breaks out of the hypnotic trance they were end. Even the Brotherhood appears to have been hoodwinked, because they come out of it. Spektor looks at Sikes as the instigator of all this madness… 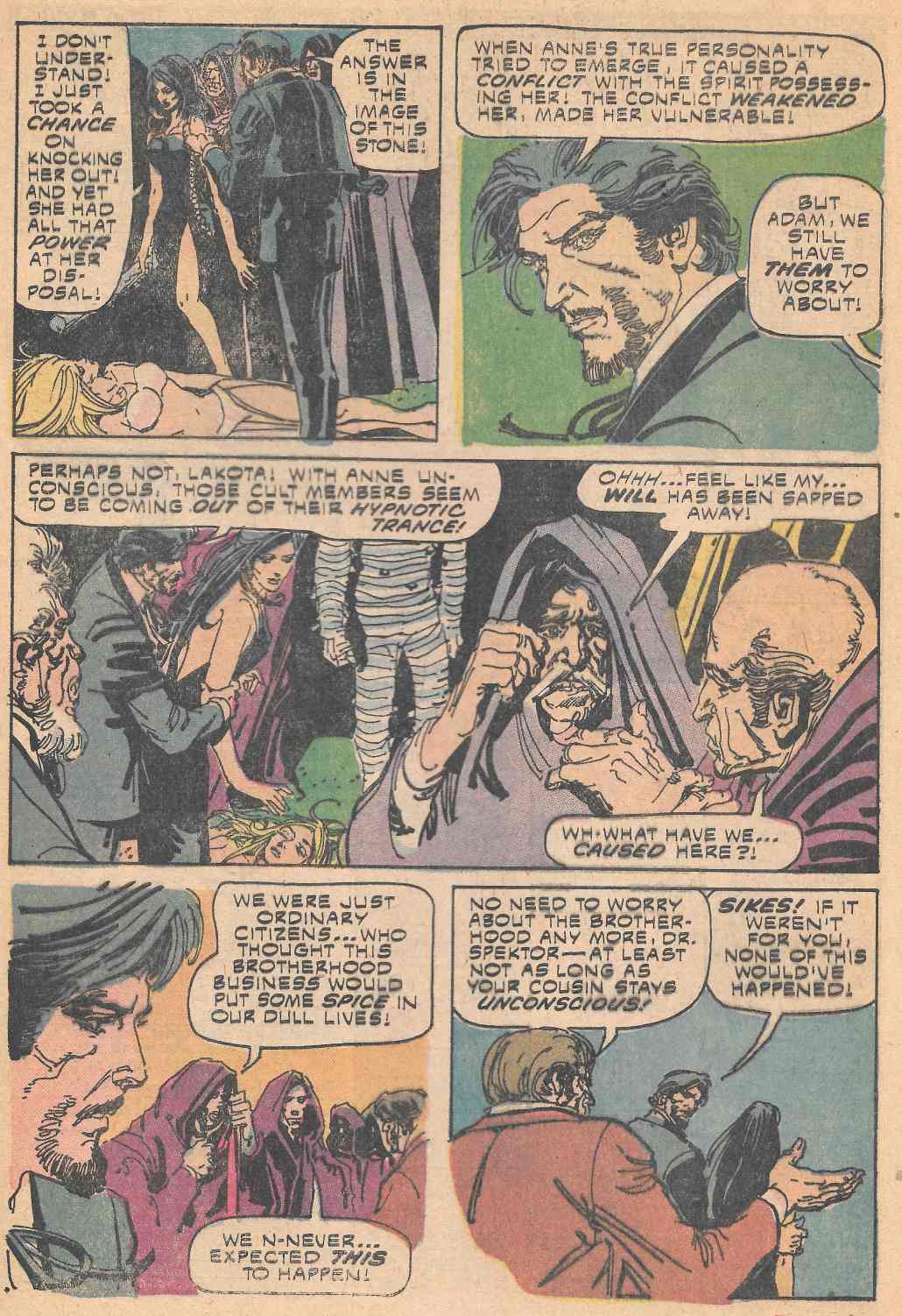 …but it seems he too, was just playing around with some occult stuff when things took on a life of their own. All isn’t well yet, though. Anne’s still possessed and Spektor needs some time to exorcise the Princess out of her. Time the monsters she has created may not give them. 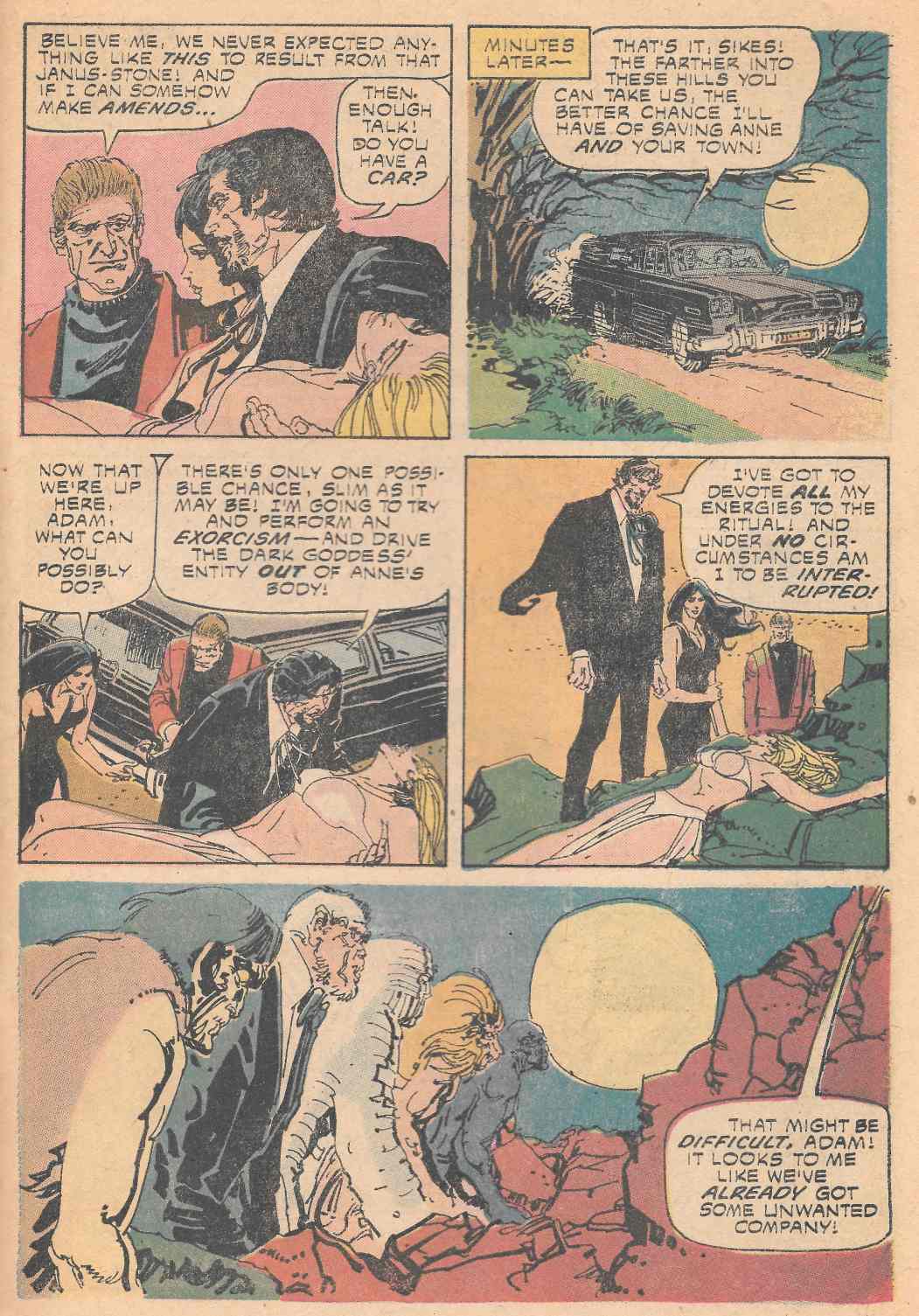 So while Sikes and Lakota exchange tossed projectiles, Dr. Spektor does his best to revive his cousin’s soul and cast out the servant of the Dark Gods. 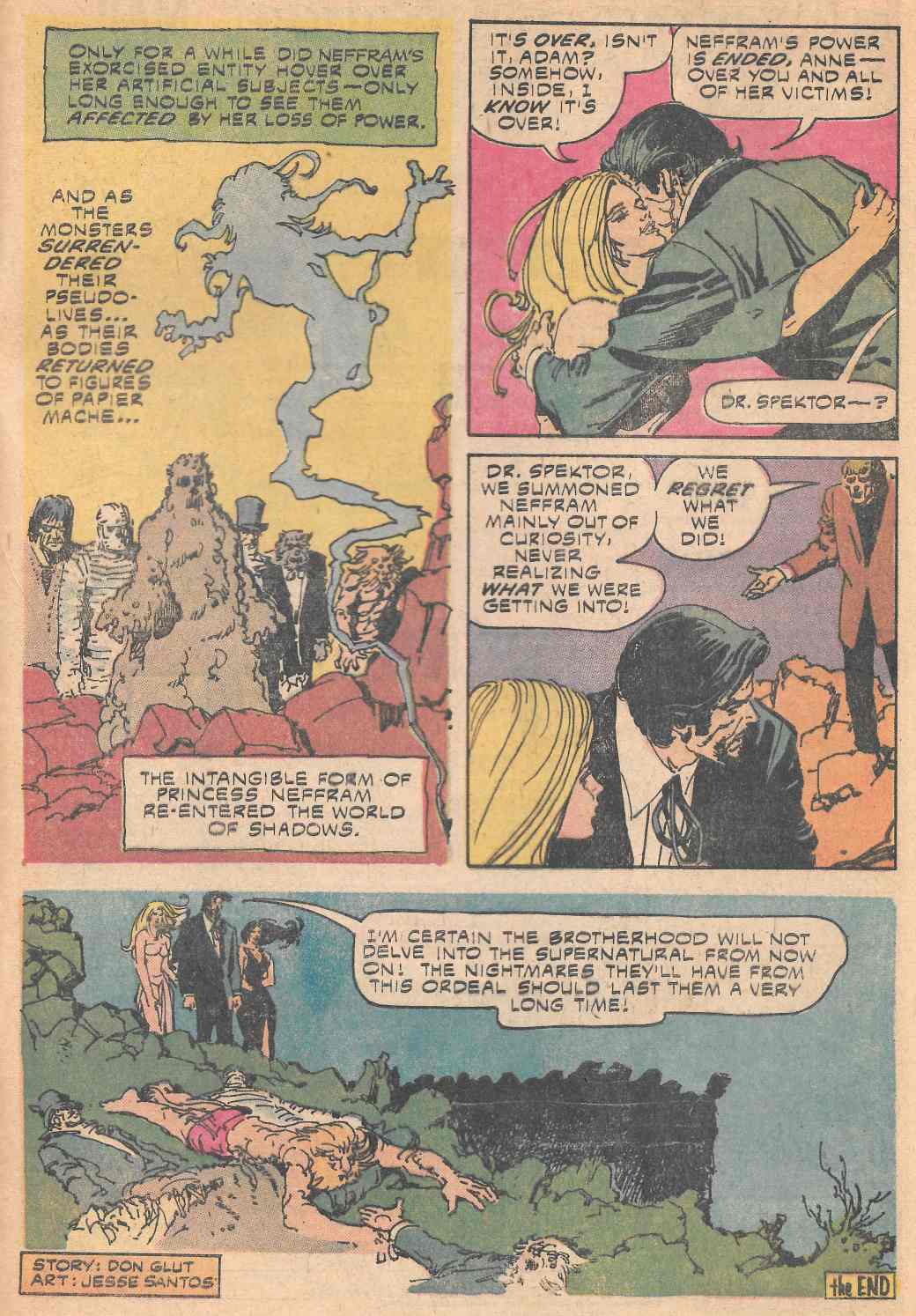 He’s successful, and all the monsters turn back into paper mâché. Sikes offers up a pretty weak apology and Spektor comments that the town will be fine because everyone will be too shamed to ever do something like this again.

This was a bit silly. I found the art the best part of it. The unfinished quality of the Whitman, Gold Key, and Charlton lines always made their stuff seem more raw and powerful. Storywise, the issue wasn’t bad, but not really anything to shout about either. Would I read more if they came the Crapbox’s way? Certainly. But I wouldn’t pay a premium for more Dr. Spektor. We can call his files “case closed” for now.

Aside: Did I ever mention I was a huge 6 Million Dollar Man fan as a kid? While the book might not have garnered heavy reading, these ads would have had me pouring over this tome for HOURs dreaming of toys. 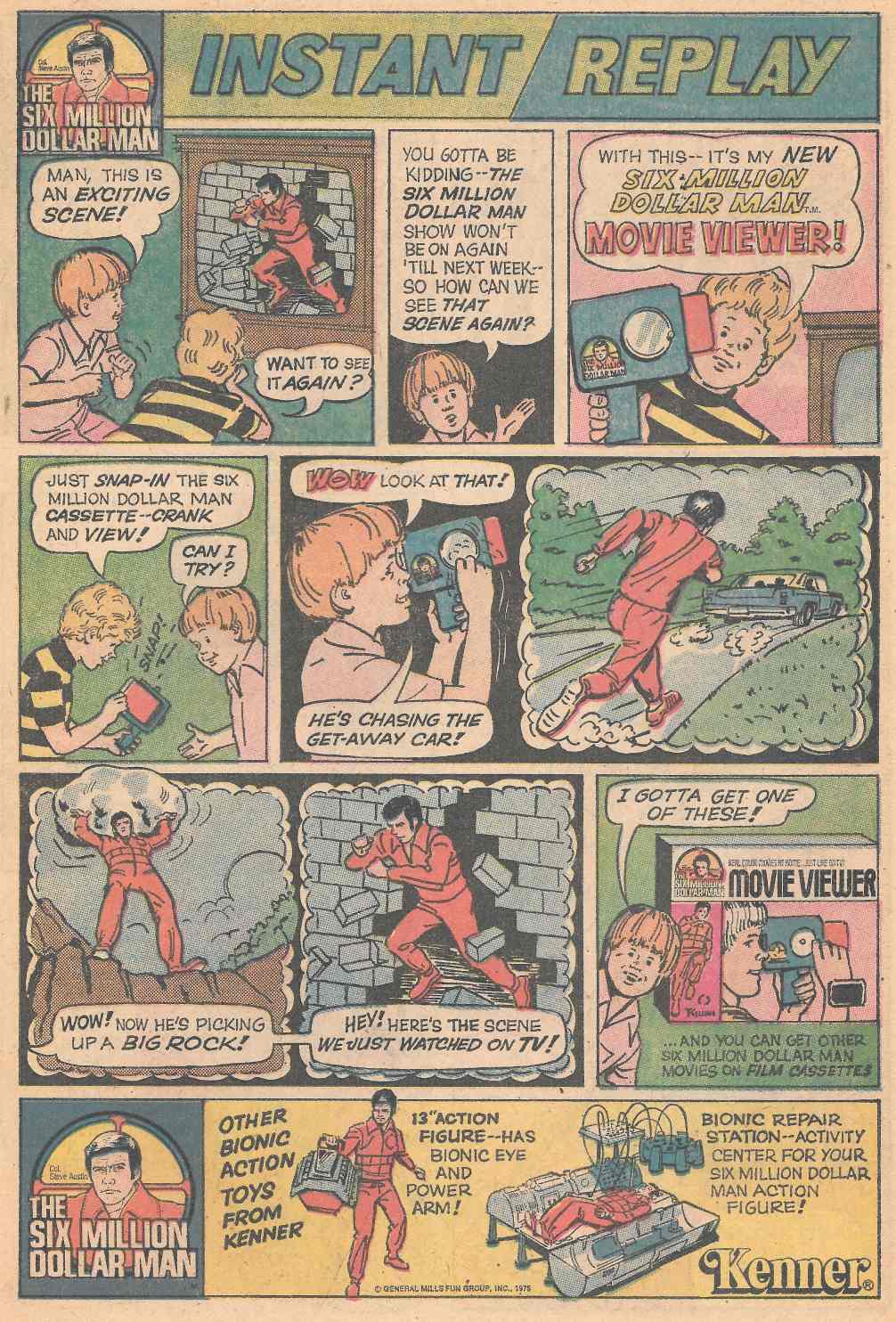 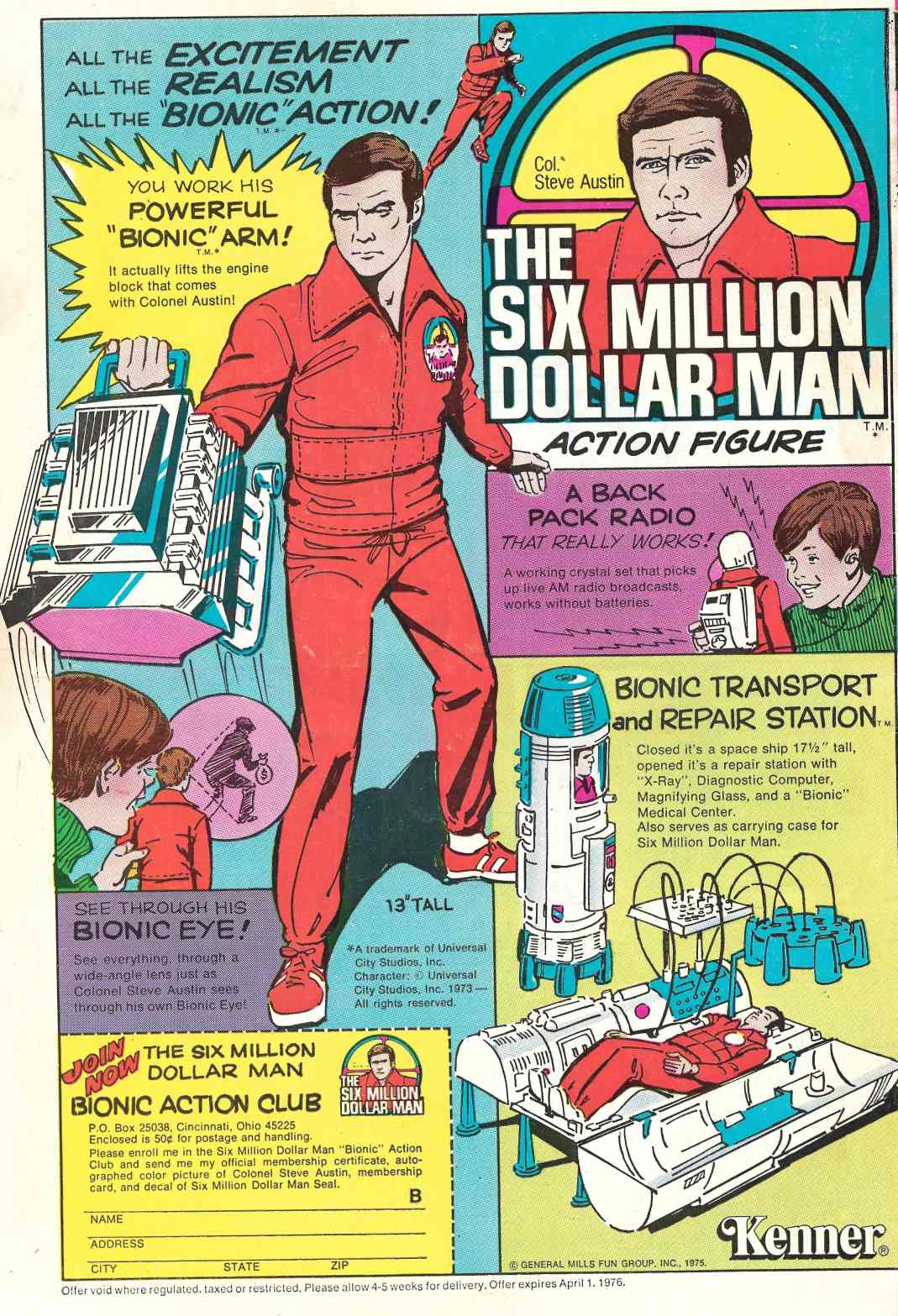 Posted by SonOfCthulhu at 8:00 PM