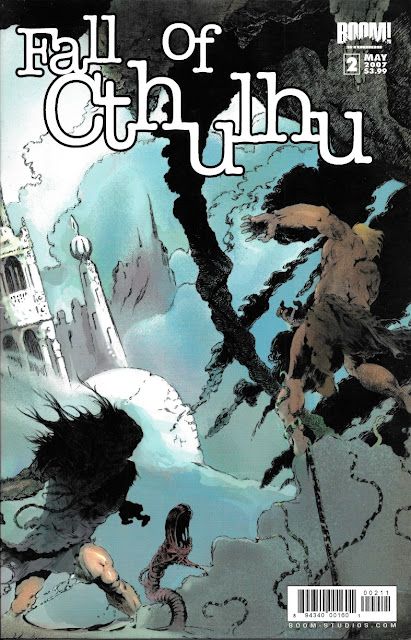 I don't believe there has ever been a more difficult time to be a fan of HP Lovecraft. His current popularity in the pop culture psyche is such that there are broad swaths of products being emblazoned with Cthulhu and mythos branding. And not all of it in a good way.

As a devote of his weird fiction, I am often torn between supporting things which bear his name or that of his most well-known Elder God to increase public awareness or distancing myself from them in an attempt to not further muddy the waters created by his weird fiction.

As an example of this, take the book "Dream Thing," the 139th book in the ill-fated Destroyer series. A crossover tale of sorts that finds Remo Williams, Murphy and Sapir's titular hero, facing off against a thinly veiled Cthulhu in one of the worst entries of that series. It is impossibly written with tie-ins for future volumes intersecting at odd points with no real rhyme or reason. The main story itself is incomprehensible, boring and silly to the extreme.

Yet do I support it because it is a Cthulhu tie-in? I mean, I bought the flipping thing and yes, it sits on my shelf, but when someone points it out…

I have to explain that not all mythos related titles are good.

A few that are? Mike Davis runs a consistently great ezine with a fine bunch of authors who know how to sling a good Lovecraftian tale. (https://lovecraftzine.com/), likewise Ross Lockhart's Word Horde (http://wordhorde.com/catalog/) and Kat Rocha's 01 Publishing (http://01publishing.com/shop/) are pumping out some amazing story anthologies, and one can never go wrong with Chaosium's Call of Cthulhu role playing game modules (http://www.chaosium.com/call-of-cthulhu-rpg/).

I started in Fall of Cthulhu late. Perhaps because glancing at it on the shelf didn't really enthuse me much for the title. Dark painted images met odd, thick lined comic pages in an unholy mess of inconsistent tone. But oddly enough in the reading of the book I found a strange melding of the media that made far too much sense and a story that tickled the unease hinted at in some of HPL's disciples' better work.

Now I have all of these and can tell you that they are WORTH full price dollars, even in the collected trades which are fairly small size and reduce the impact that the art can truly convey. The story blends in Nodens, a character I've never been comfortable with since August Derleth changed him to a more benevolent deity in the post-Lovecraft tales. Fall takes him back to a much scarier version. The story structure is broken into real world which are shown in painted pages, and the cartoonish sections which take place in the Lovecraft's Dreamlands.

We begin issue two with our lead character Cy and the love of his life Jordan burying Cy's uncle. After thanking the priest who officiated the ceremony, they share a moment where Cy brings up his missing sister. 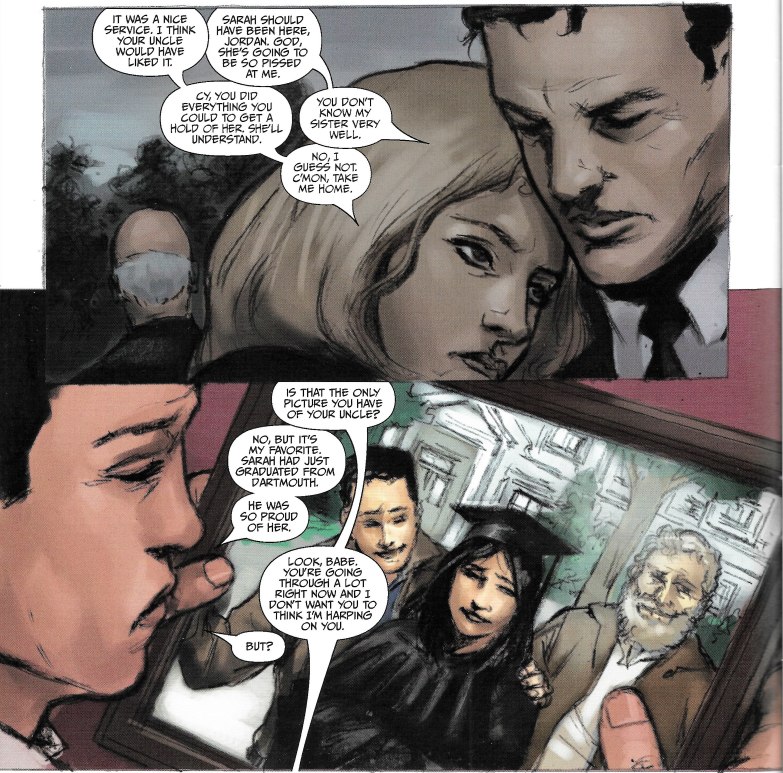 What Jordan is so bothered by is this little item, a knife found among the strange papers and journals Cy's uncle was working on when he was discovered. 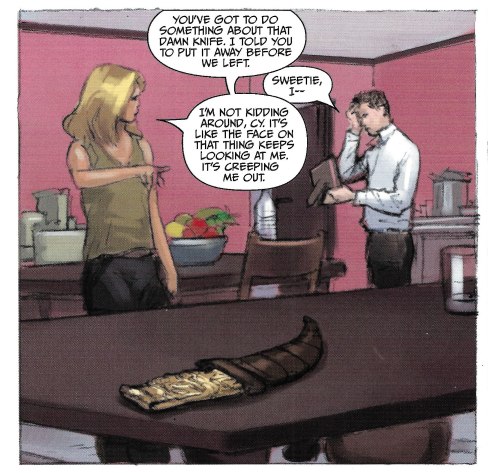 And there we have our first item of interest, this creepy knife with a carved face on the hilt. It comes into play in a way so horrifying in a later issue that I don't even like to hint at it. However Cy is less interested in the knife than in something found in his Uncle's writings.

And along with that we get our obligatory name drop and some hints at the Necronomicon plus an argument about how the uncle killed himself in public…. 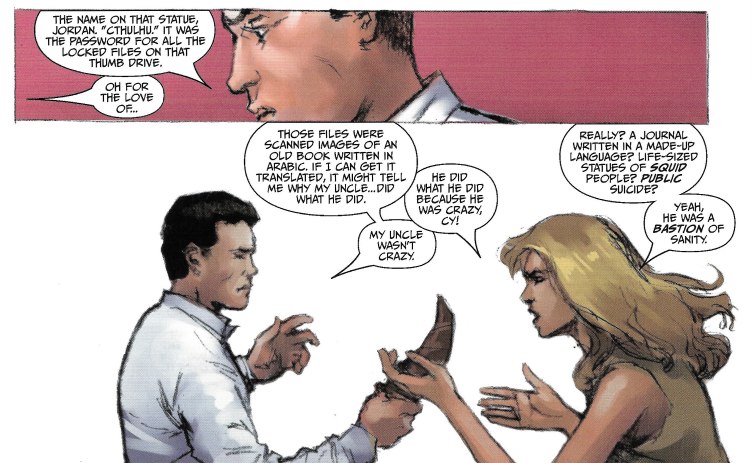 This couple is in need of some counseling and Cy's obsession with his uncle's suicide isn't going to help matters any. Knowing he can't count on Jordan for support, he asks a campus friend Brad to decode the Arabic pages for him… 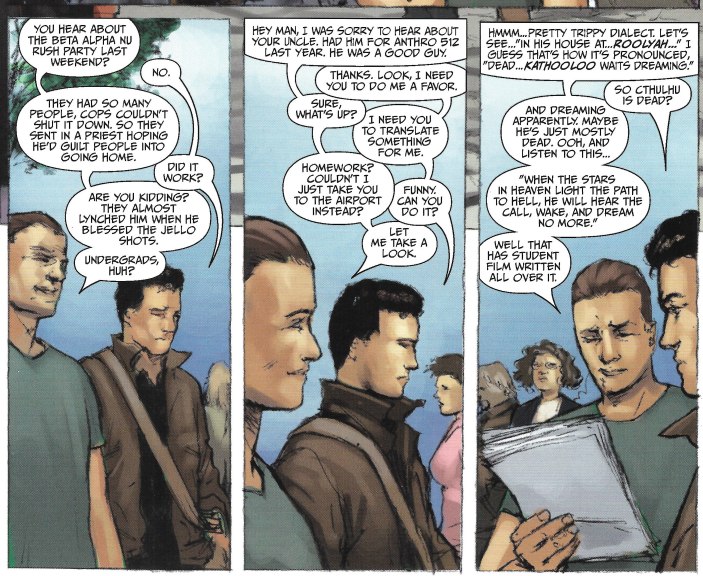 …and then heads to the boarding house where his uncle was staying. There was a creepy Cthulhu-ish head statue in there that he wanted to take a closer look at… 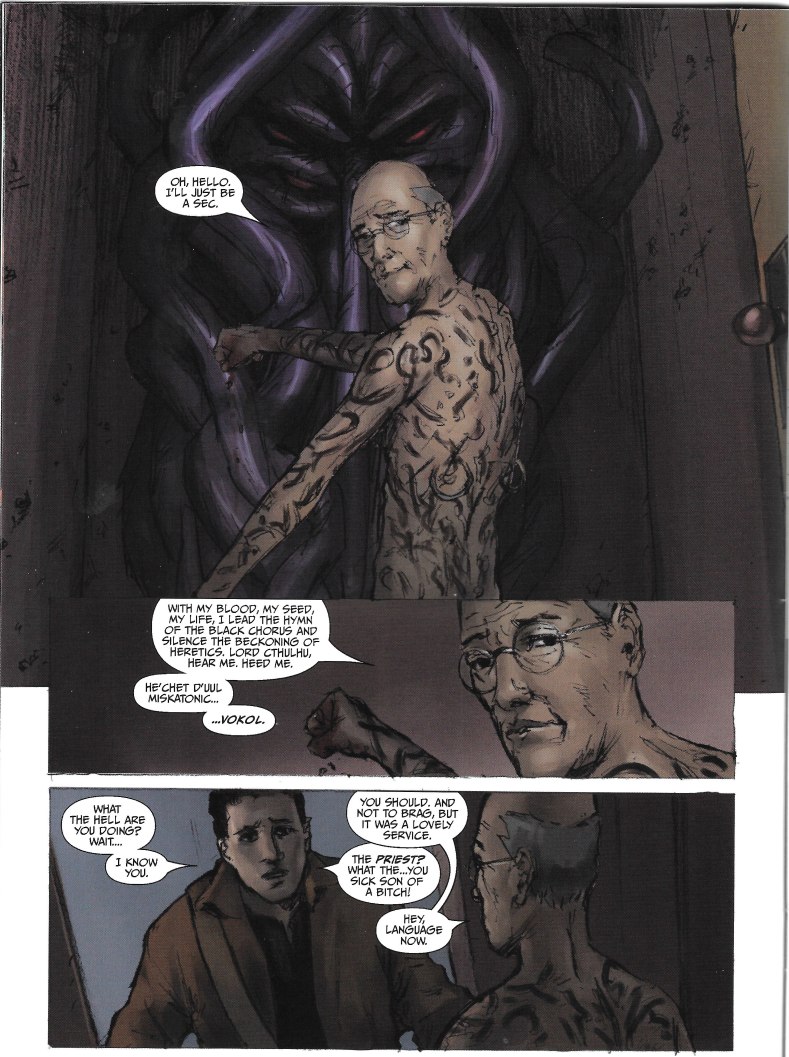 When Cy informs the boarding house front desk, the landlord tells him he will take care of it and then, AFTER Cy leaves, proceeds to have an underling clean up the room and bury the body out back.

It is right about here that you start to feel the veneer peel back off of everything Cy comes in contact with. The very precept of Lovecraft's mythos is that there are numerous dark forces that turn the clockwork of the universe and that humanity should never seek explanations for unforeseen events lest we uncover them. All too true in Fall of Cthulhu's universe. 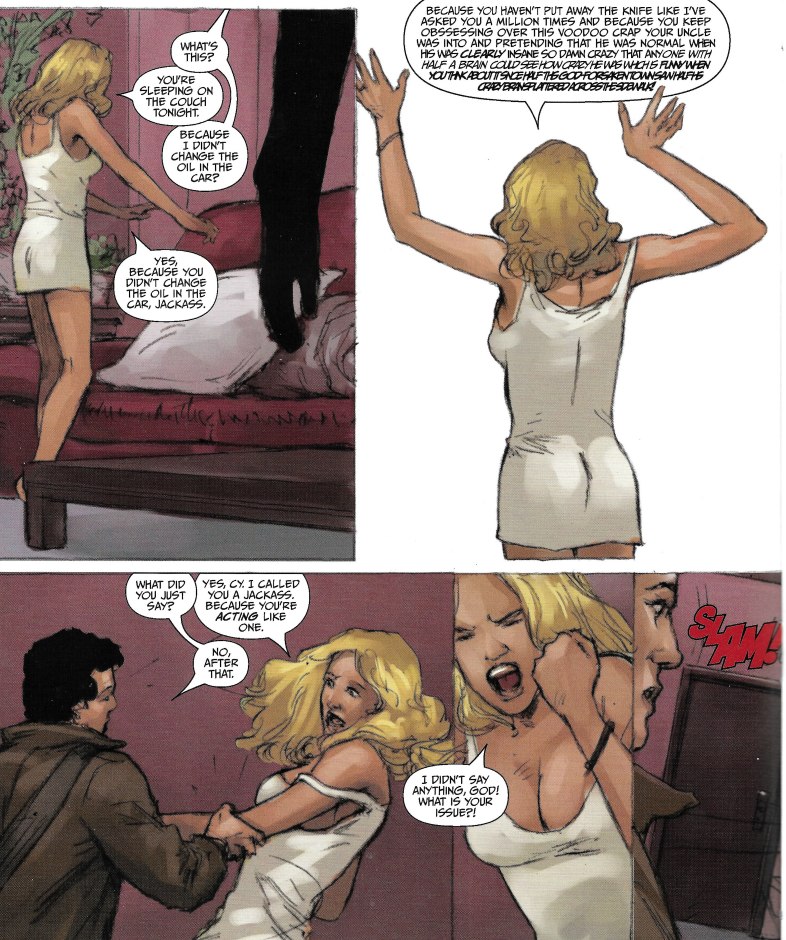 Appears something is picking at his girlfriend's fragile psyche. Cy endures a night on the couch and then seeks out Brad to see how things are coming with the translation. He discovers him in his office tied to a chair, his physical state shown only in shadow to us. It is all too clear something horrible has happened to him as Cy turns away and throws up before calling 911.

At the hospital we get info on what's become of Brad. 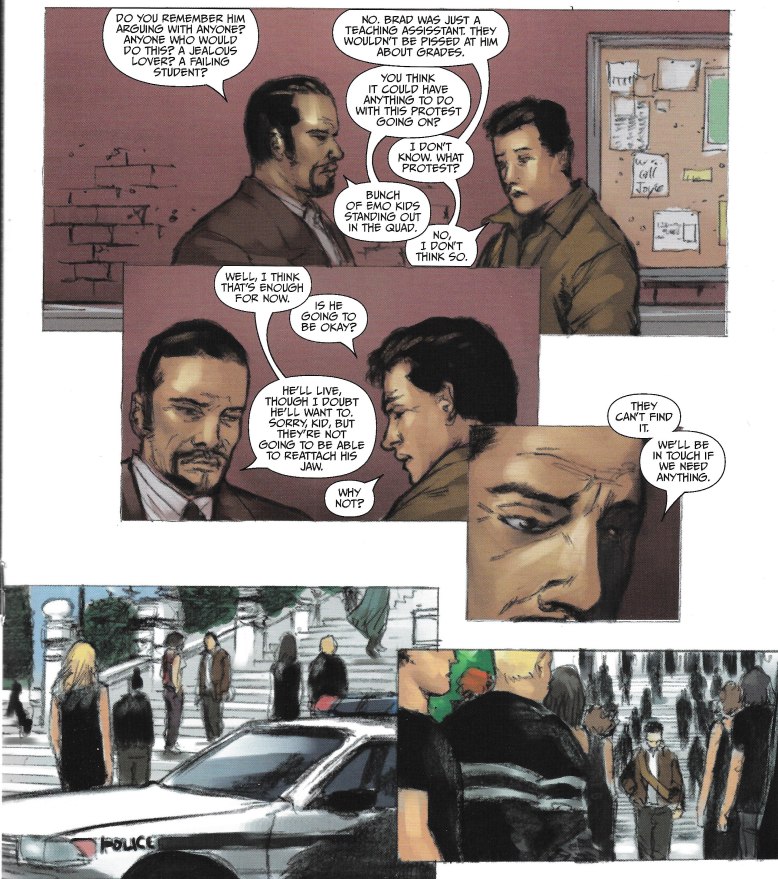 If that isn't enough to put the wheels of fright on the train tracks of madness, I don’t know what is. To make matters worse, Cy is wandering the quad immediately after when all of the emo protestors stop at the same moment to cry out "Vokol!" and then faint away, waking up as if they didn't know what they were doing.

He would investigate further, but receives a call from Jordan that their house has been ransacked. Rushing home he finds all his uncle's notes taken. One item was left behind, however. 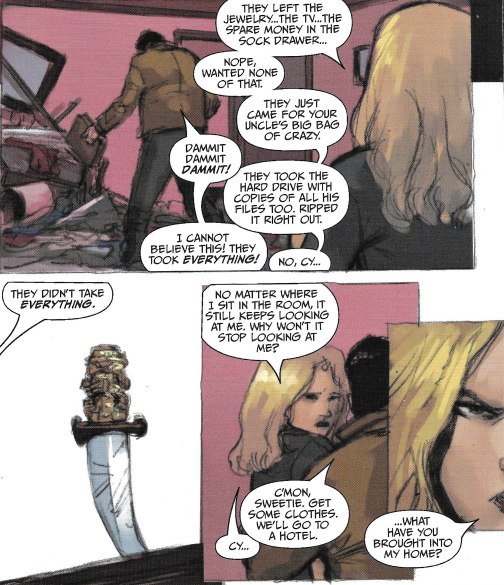 While we are left to ponder that, Cy sleeps and in his dreams visits the unnatural dreamlands where he encounters two very important powers: great Nodens and his nightgaunts, fresh from a kill; and the Harlot, a keeper of secrets who may be more dangerous than she is hideous. 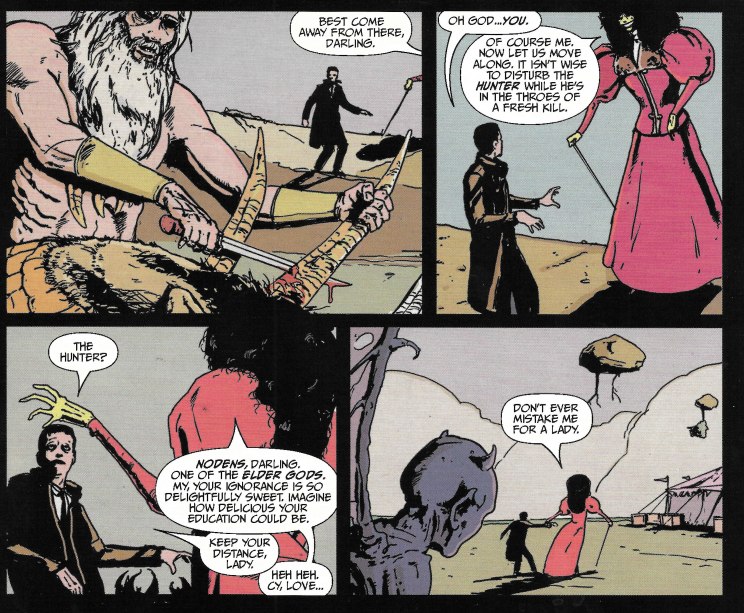 The Harlot "collects" people and keeps them in boxes only she can open, storing them infinitely until it suits her purpose to release them. She knows much of what is going on and tempts Cy with that knowledge. 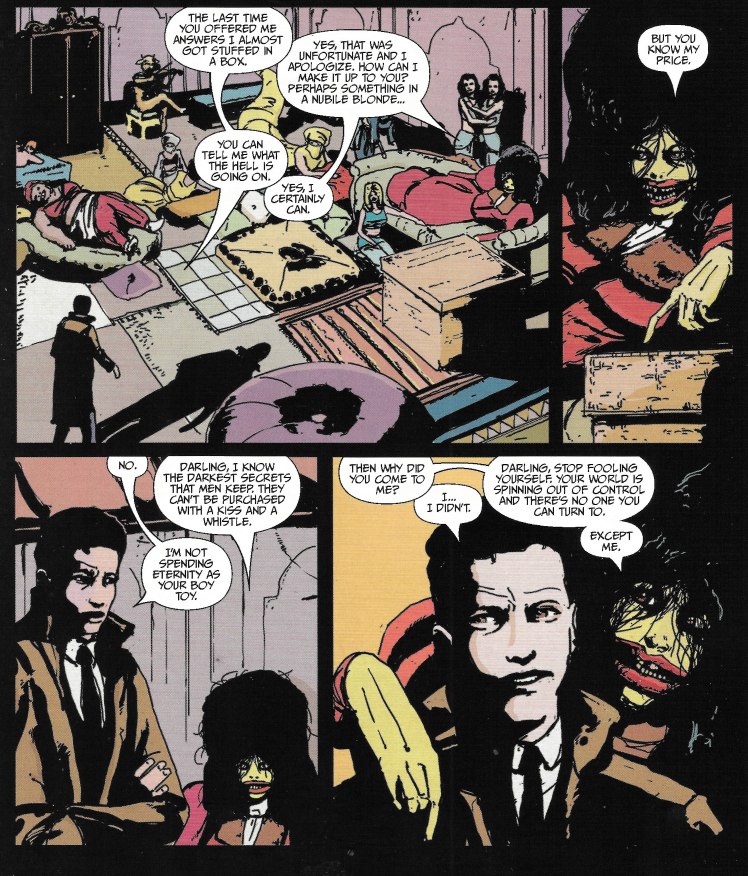 Appears he isn't quite ready to join her container store collection. He reveals much of what he does know to her and she leaves him a final riddle that serves as a cliffhanger to last until issue 3. 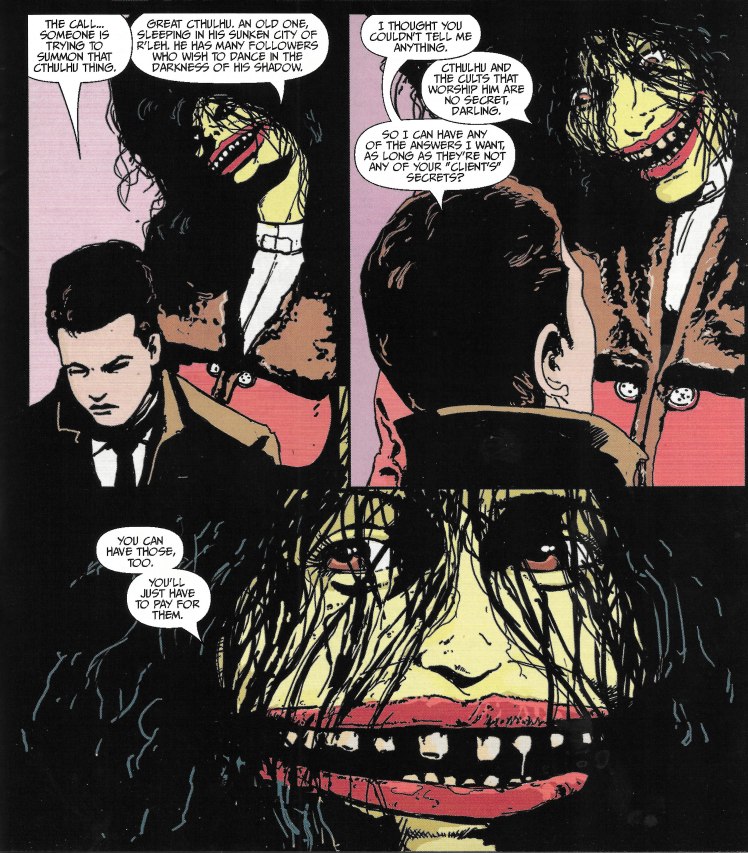 There were 26 of these which comprised of three different stories centered around the Mythos. The last 8 were two stories of 4 issues each, so the bulk of this run was this storyline and I enjoyed it quite a lot. If you like modern slants on HPL's mythology, you should do yourself a favor and check them out. I think you'll be glad you did.

Posted by SonOfCthulhu at 3:07 AM