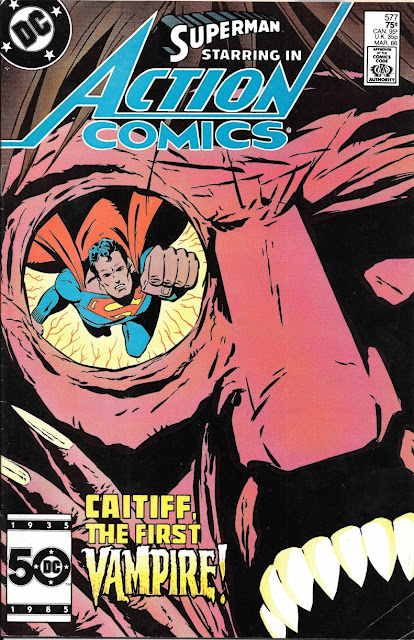 Shouldn't this be funny?

So when you hear these three things together, what's the first thing that comes to mind?

There! Ready to guess? I bet it was this, wasn't it: 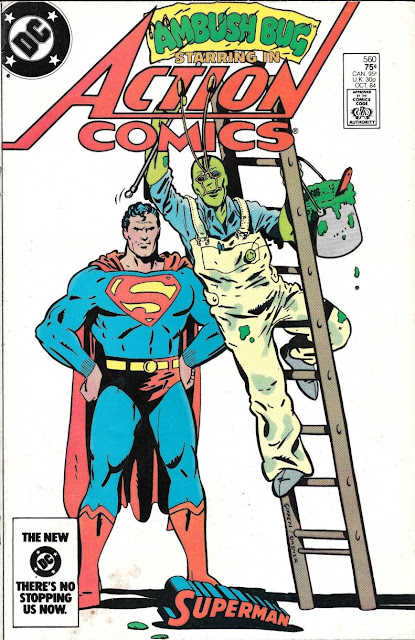 Yup, Ambush Bug. That's should be everyone's first guess. What it shouldn't be is Caitiff, the First Vampire. And with good reason.

And Caitiff is the ldol of no one. He has had exactly two appearances to date, neither of which were stellar attractions. This was the first and the second was in Issue 25 of Justice League International, which was an off issue for that title. Just as this is an off issue of Superman. Wanna see how off? 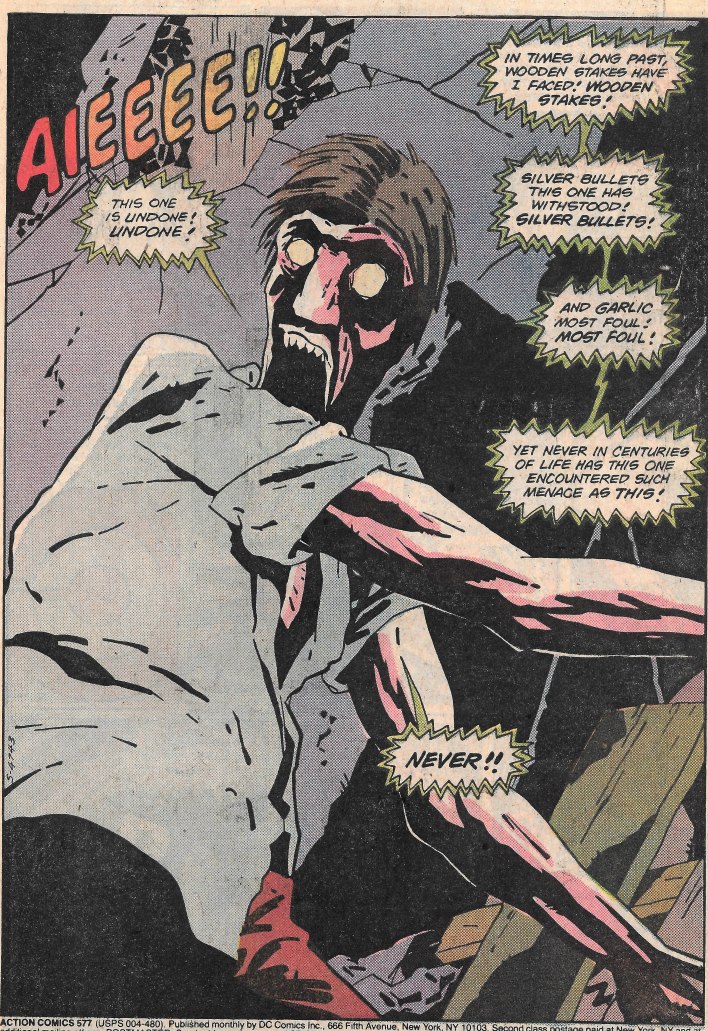 We begin with this as our welcoming splash page. Meet Caitiff, done in Giffen's unique penciling style. Many people would be disappointed with Keith's take on Superman in this title. I mean, this isn't the rounded edges and clean style of Curt Swan, but instead a Post-Kirby, angular and jarring world Keith is creating.

I find that Keith's pencils have a lot going for them, but occasionally have to really force myself past his actual layouts. His Legion stuff is particularly difficult to work through. I get the Kirby influences but I question the inclusion of certain panels that don't show characters or action in a sequence of frames. Giffen even pokes fun at this tendency when he has Ambush Bug say in Action 560 "You really think if I was gonna slice my bod open, Giffen would hide me behind this door?" in a panel that shows nothing but a off kilter wooden door.

In addition, Giffen gets caught up ascribing to a ridged nine panel per page layout style that I find constricting and forced. Again I will cite his Legion work for an example of what I mean by this.

While I can work with what we have here for graphics well enough, what I struggled with was the fact that we had both of the guys (and don't forget Bob Oksner!) who had made Ambush Bug so much fun (with Bob Oksner, too) writing a tale (that Bob Oksner inked! He inked it! He inked it!) and..would you quit that. Fine! THREE of the guys (Julius Schwartz is a bit upset that he hasn't been mentioned AT ALL, yet)…

You've got a MAJORITY of the creative force behind one of the funniest books of that decade turning in a story that falls so very, very flat.

At first glance you may be wondering what this character is babbling about in fearful dread. We'll get to that. With a name that literally means "a contemptible or cowardly person," Caitiff's wimpy demeanor should actually be expected. The labeling is intentional by the way, he is supposed to be a sympathetic character.

The source of his fear? 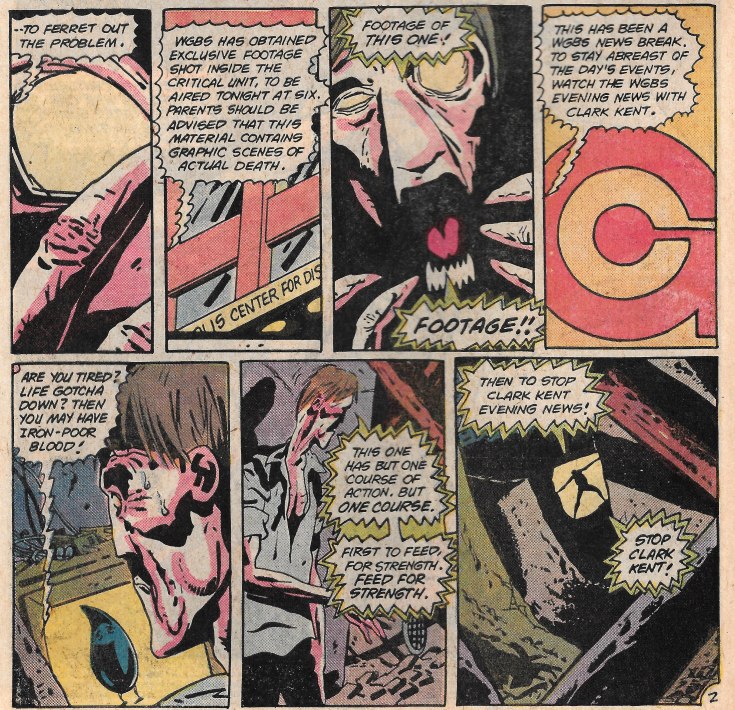 WGBS has obtained footage of patients dying of unknown causes at the Metropolis Center for Disease Control. And that's important, because Caitiff is the one causing those deaths. Now it's never explicitly SHOWN how he's causing them, but we assume he's draining their blood. Also this is the most mixed up story I've ever read. Giffen's plotting is way off. He wants to make us like Caitiff yet the very actions of the character show him to be someone who should be stopped at all costs. I mean, look at this… 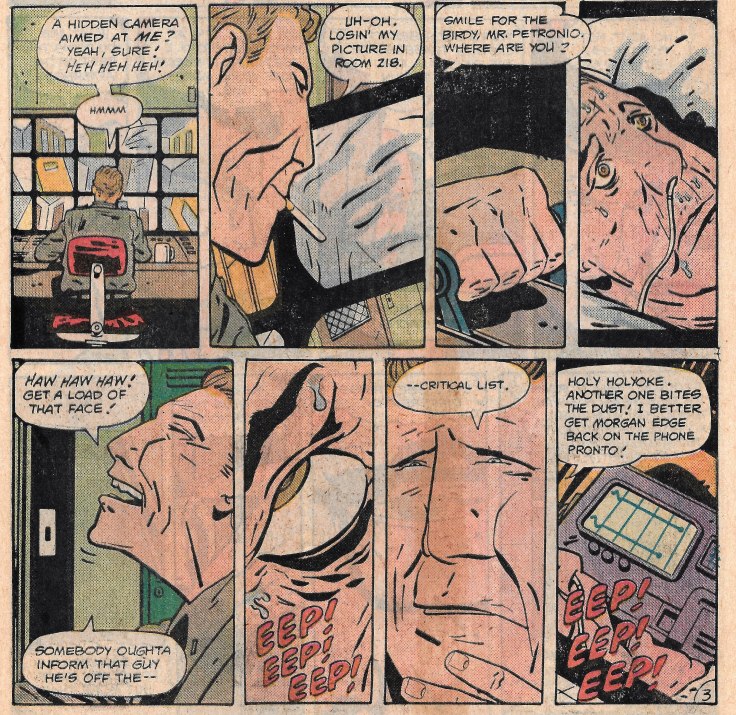 Caitiff just killed that guy. He was on the mend and then blammo! Caitiff sucked him dry. Surely we shouldn't be rooting for him to get away with cold-blooded murder, right?

No, we totally are supposed to root for that. I don't understand the story. It doesn't help that at any moment I expect Ambush Bug to pop in panel and say something zany, but aside from my mental distractions, we are supposed to take the side of a monster, even though it is a whimpy, whiny monster, over that of humanity. This was a contrivance that I can't wrap my head around.

I think a worse offense though is that Superman…SUPERMAN falls for this plot gimmick too. This is the man of steel, the all-American boy scout, the bastion of truth and justice, and yet he sides with a killer over the innocent. You'll see in a bit how that unwinds, but I want all of you on record here understanding that Caitiff is a murderer. Make ZERO mistakes about that. 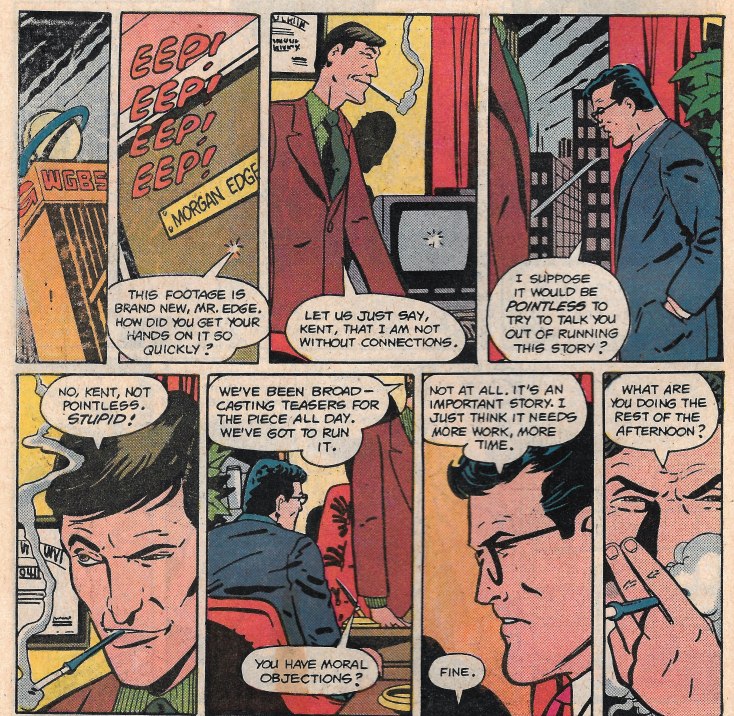 And to make matters way, way worse, the guard here is SELLING tapes of people dying to Morgan Edge, Clark Kent's boss. Even in pre-HIPPA 1980's, that's got to break like a million privacy rules. Morgan is keen to run the story right away, which sounds like the worst business decision ever. And possibly actionable, if not by the Center for Disease Control facility then by the family members of the recently deceased. Pain and suffering lawsuits at the very least, right?

Even more off-kilter is the fact that Clark Kent has no moral objections to running the story. The story doesn't need "work" and "time," it needs to be tossed out on its ear. It is inflammatory without proof of wrong-doing. And it lacks the proper authorization to even be aired. And while Kent may be a lily-livered coward at this time in the DC universe (who can say, wasn't my era), there is no denying this is damaging to my view of the character. At least have him raise a point or two about how insensitive running the story would be or something. "…needs more work, more time" -- my butthole.

Kent changes into Superman and makes some statements I find hard to understand. 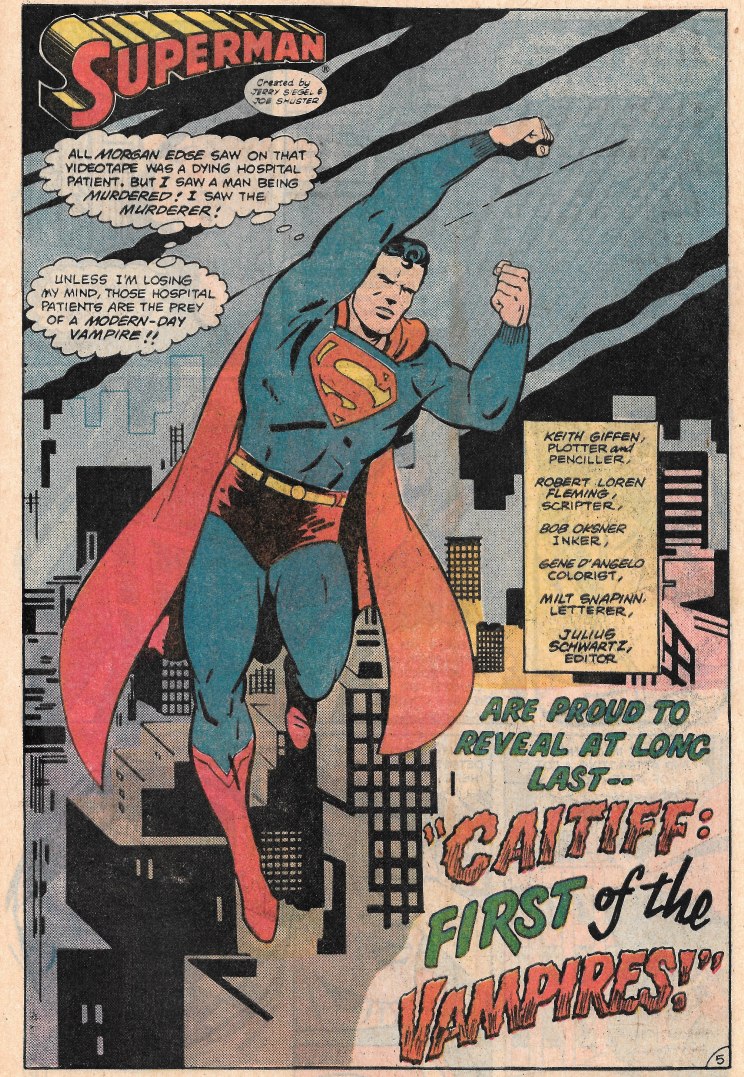 There's no description here of HOW he detected the murderer. He doesn't say he heard something, but that he SAW the murderer. How does that work exactly? If an image of Caitiff was somehow on the tape, how is it that he saw it but no one else did. This needs explanation of some kind. It's not like x-ray vision would help out here. Super-hearing I could agree with, but he doesn't say he HEARD the murderer, Supes says he saw the killer.

Seeing him or not, he uses tricks learned from Batman to determine how the killer gained access to the victim's room. 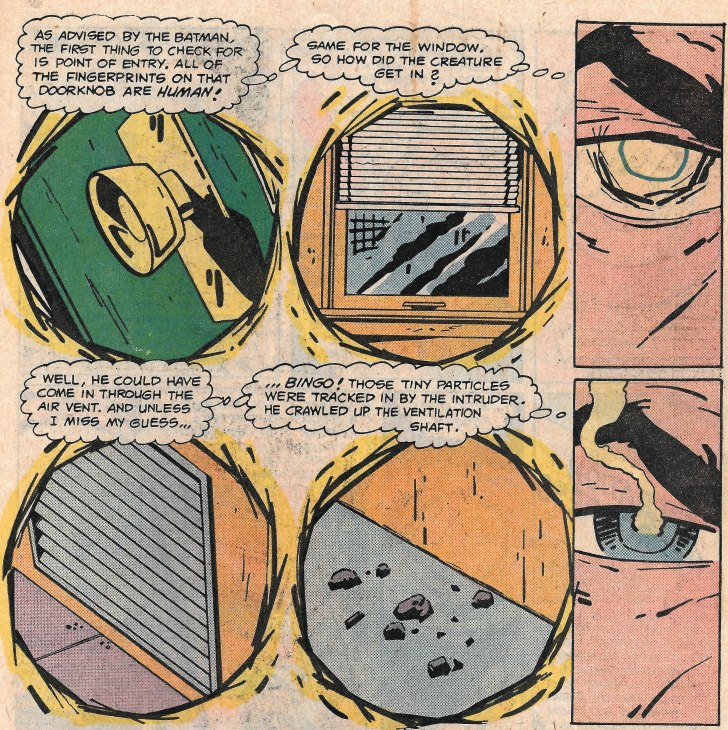 Once Superman knows how the killer got in, he no longer worries about the killer and goes back to work. No, seriously, that's the plot. Meanwhile another news report mentions the upcoming story of the death at the Metropolis CDC which sends Caitiff into what I think is a musical number. 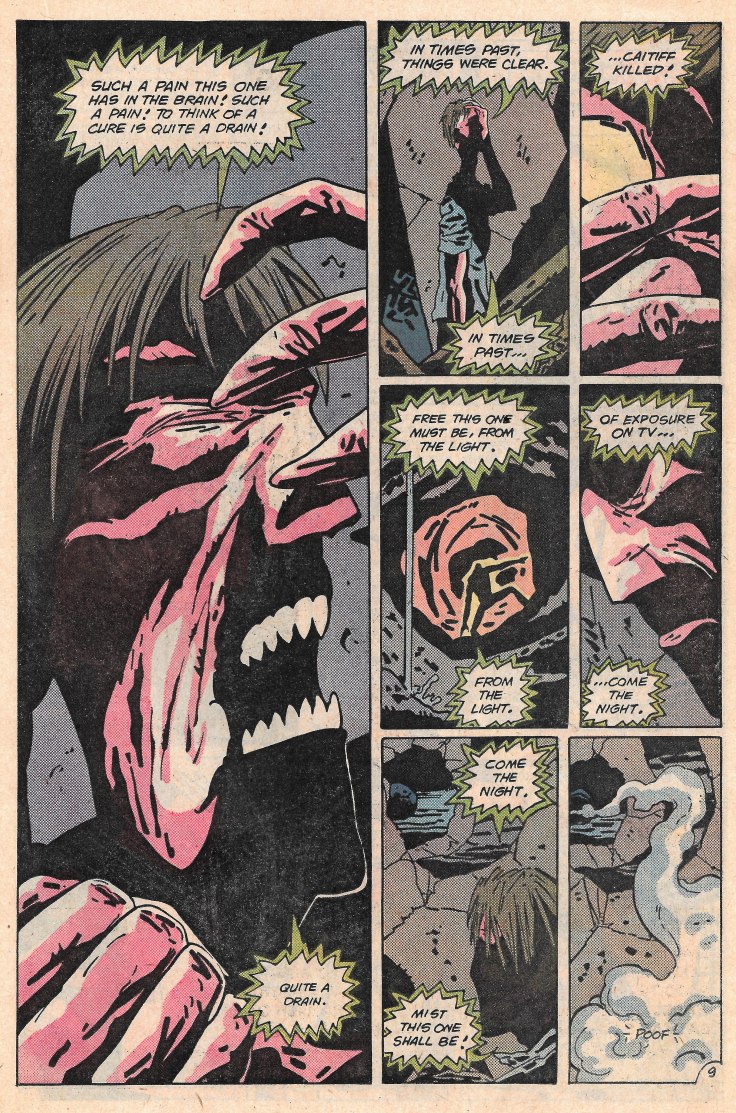 After which he glides as a mist over to the WGB newsroom and hides in there air vent while Clark reads the news. He goes completely insane when Clark mentions…well, you have to see this one to believe it… 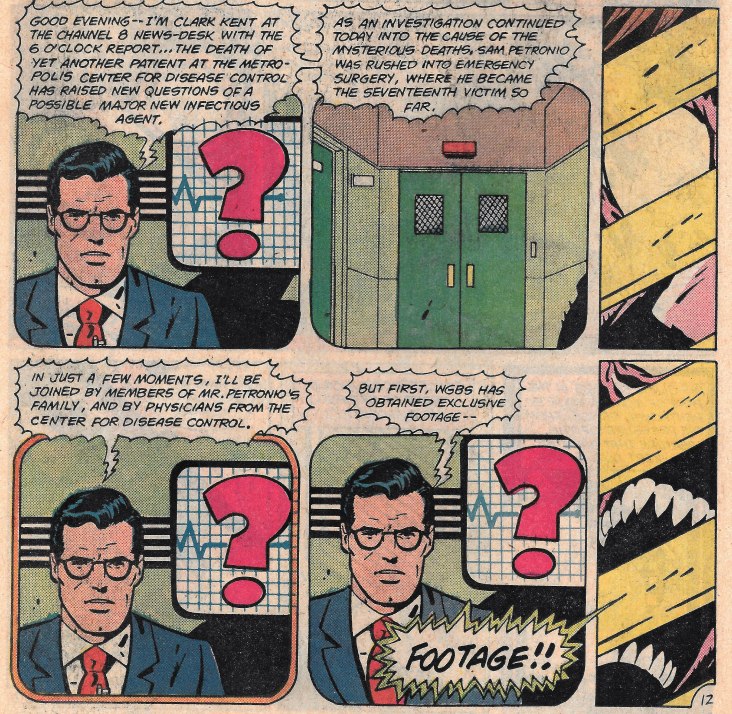 It's like Gollum…"Footage! FOOTage! Has Kent gotss My Footage in his pocketsss!" and it only gets worse from there. 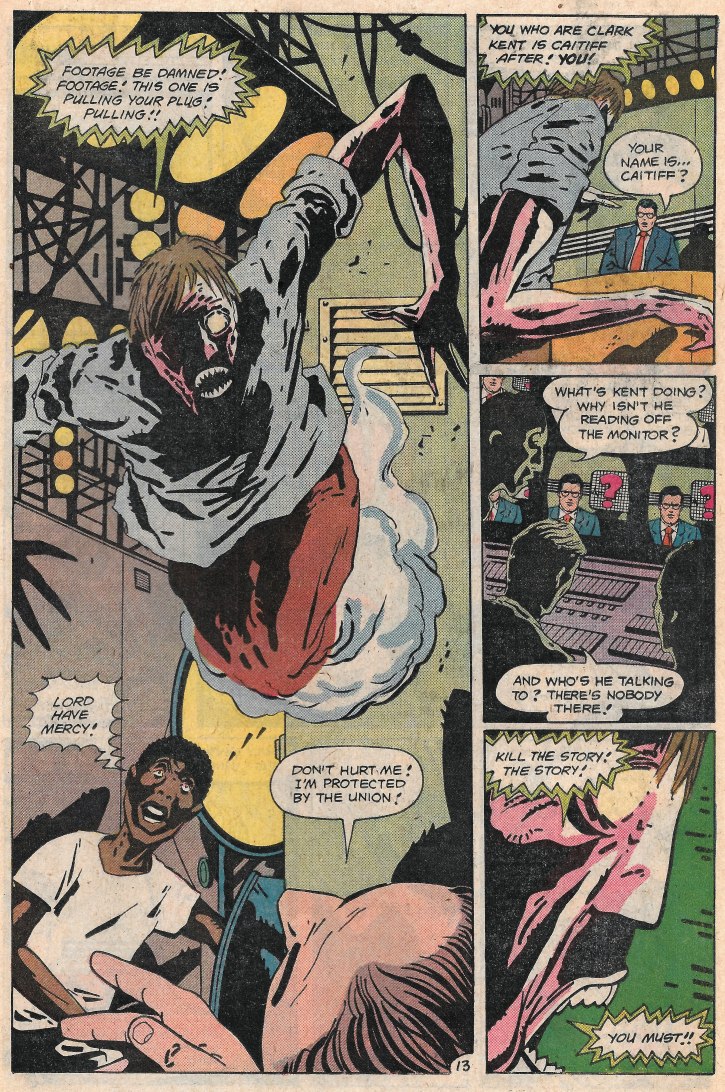 Caitiff leaps?? blows?? gusts?? from his hiding place. Is that right? What is the proper mode of transport for a gas? Don't say fart. I already thought of that and that joke is just too easy.

Anyway, that happens. The crew freak out but no one watching from the control booth or at home can see him. I guess those "can't see their reflection" stories are true after all. So Caitiff is free to threaten Kent. But at the last second he is rescued by… 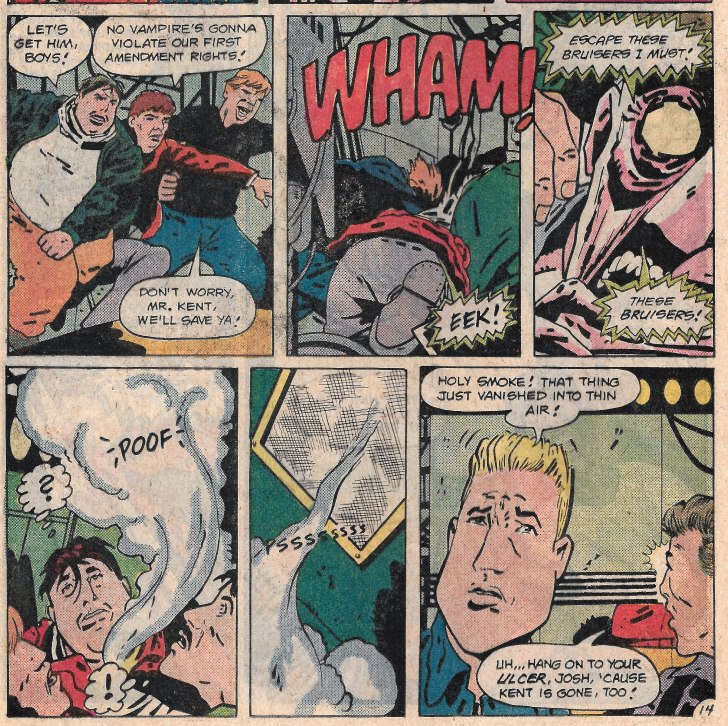 That's right, ladies and gentlemen. The overweight union workers overwhelm the vampire and nearly kill him. If only these guys had been around during the Twilight years.

Sadly, he escapes by becoming a gas again. However the distraction gives Kent time to find a telephone booth and he's on the case. As Caitiff waifs past at the speed of … gimme a minute! I'm not using fart. It's too easy of a joke … SMOG! Smog! and Superman captures him by…

Yeah, that sucks. I'm giving in to the easy joke thing, alright?

But this turns out to be a horrible idea as Caitiff is able to knock out our Superman from the inside. Somehow. In doing so, both creatures bond to the other briefly. Caitiff feels what it is like to be Superman… 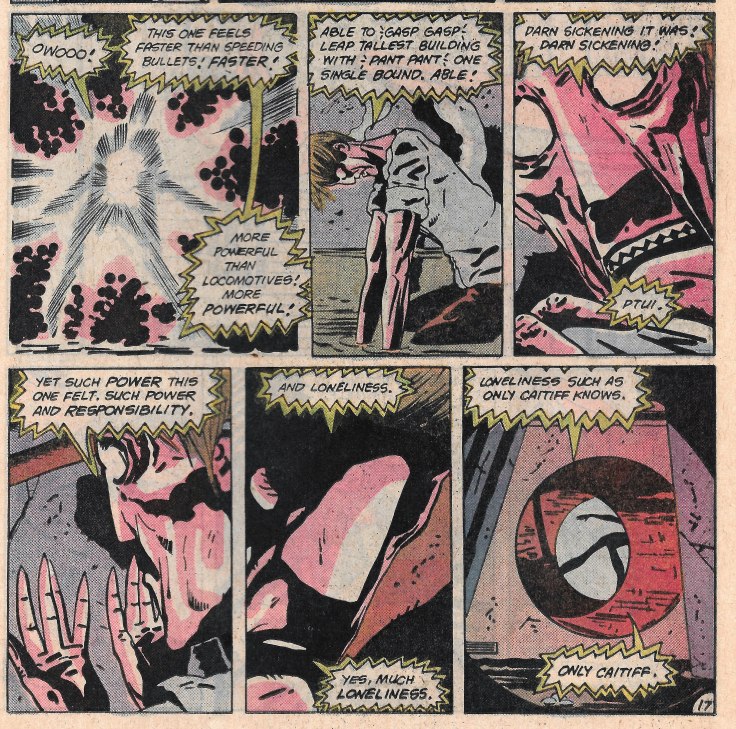 …and Superman feels what it is like to be a monster, but in a GOOD way. 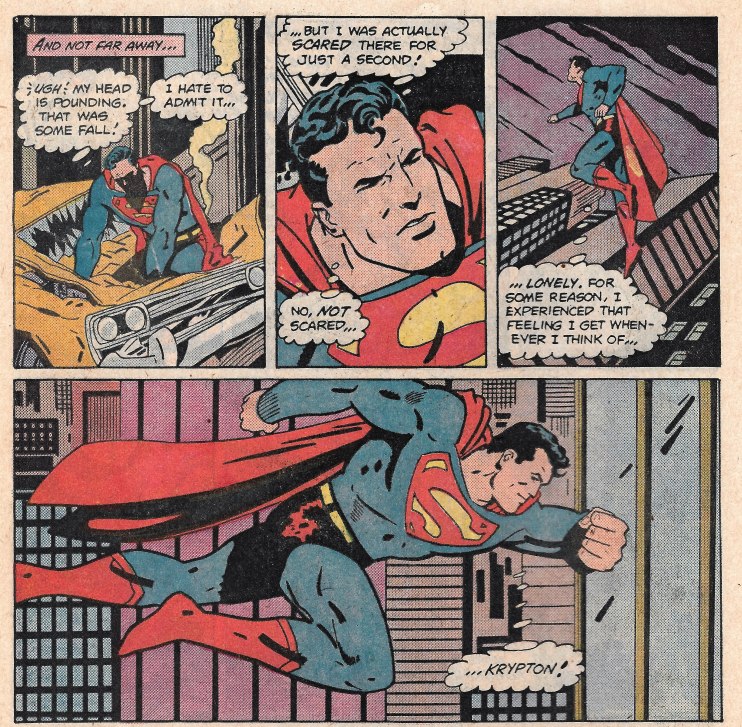 *sigh* I don't feel manipulated in the slightest by this. Giffen does draw a good man of steel. All of which leads to our final confrontation in the sewers.

But first a whole page of Caitiff having a nightmare of being staked through the heart.
And then a half page of the narrator telling us the Caitiff can sense when people are weak and near death and he thinks of himself as a mercy killer (never mind that the docs had said that last victim was on the mend).

Then Superman finds him. 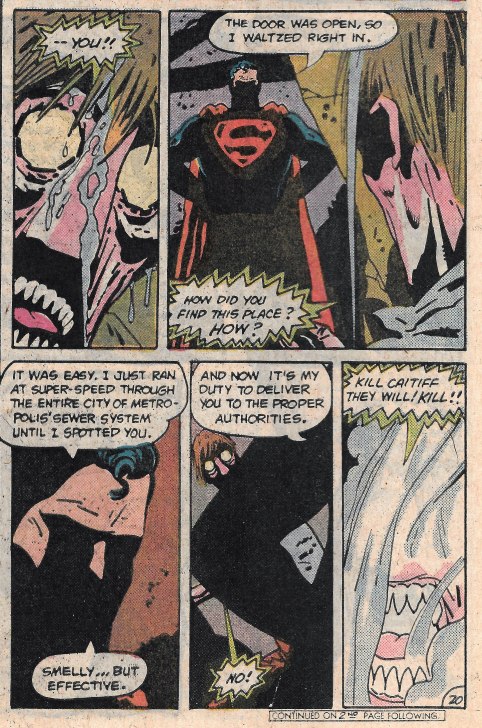 After which Caitiff wafts into the next room where this is just a crap ton of human bones. Or at least they appear to be human. 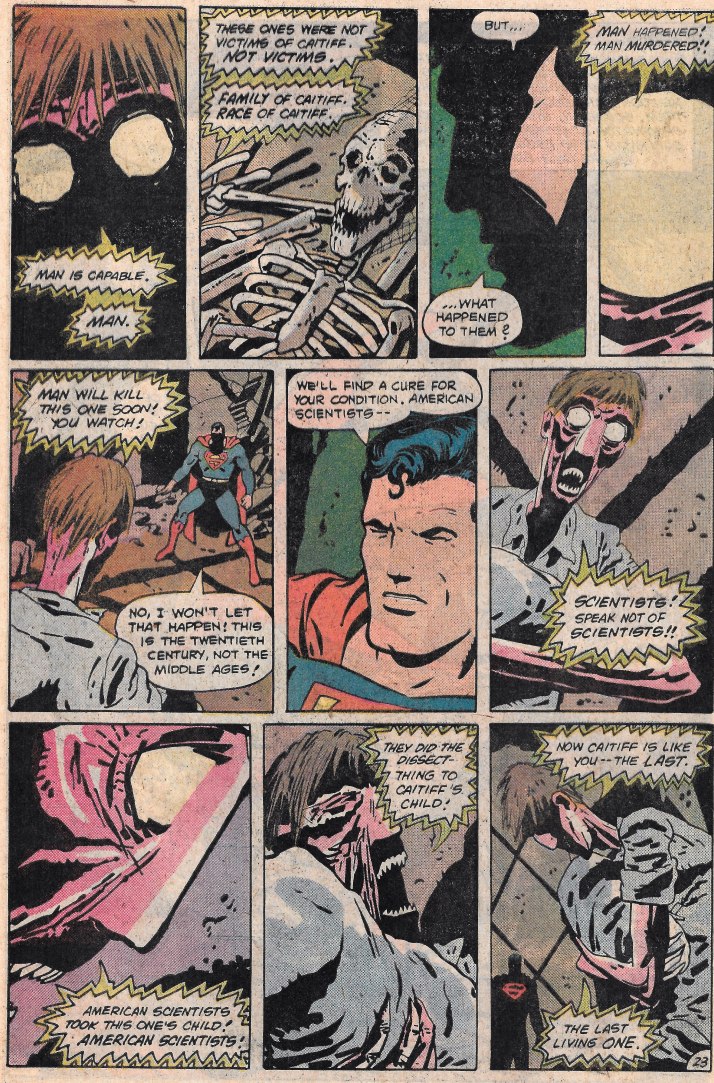 After which Superman lets him get away.

And there it is: transparent emotional manipulation. I'm not sure which offends me more, the fact that it doesn't work or that it is so poorly executed. Yes, Caitiff's people have all been killed, they were KILLING OTHER PEOPLE. And surely THAT isn't acceptable. If they were sucking blood from livestock or sewer rats, I would completely sympathize. But NO, they were draining human beings of blood. And if they were like Caitiff, they were doing it without a shred of remorse.

There is a word for cold-blooded killers who show no remorse: monsters. And at this point, Superman should take this monster in, no matter how much he identifies with him being "the last of his kind."

So this one is VERY sloppy. It fails on nearly every storytelling level: story conception, emotional impact, pacing, plotting, and tone. I expected a lot when I picked it up knowing who was doing all the heavy lifting. I feel let down and disappointed after reading through it.

But not as let down and disappointed as the people who are still dying in the Metropolis Center for Disease Control because Superman didn't put this monster behind bars.

*fart*
Posted by SonOfCthulhu at 4:31 AM