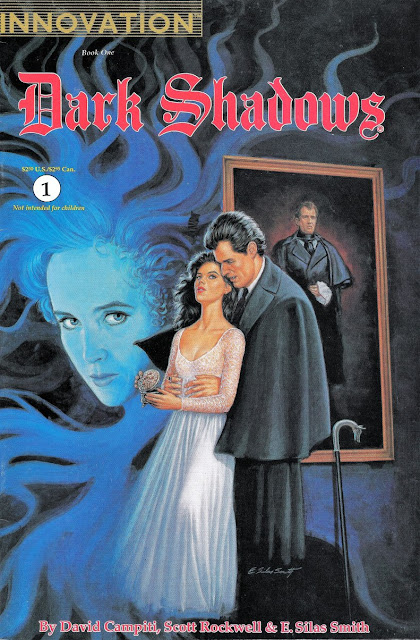 Oh yes, I'd heard of Dark Shadows before all this. Before the Tim Burton big budget movie, before finding this book in the Crapbox…heck, before I made it out of my early teens. Between Fangoria and Starlog magazines, there was hardly a sci-fi or horror film, book, or television show that I wasn't aware of.

I never-ever sought it out, though.

Dark Shadows was a gothic romance soap opera that ran weekdays from June 27th 1966 to April 2, 1971, and even though one of the main characters was a vampire, those words "soap opera" scared me off.

To me, soap operas meant lots of people standing around talking with no special effects and horrid cliff-hanger endings to every conflict. I don’t care that the TV show had ghosts, werewolves, zombies, witches, time travel and parallel universes. Those elements were likely pulled off in as cheap a manner as possible.

Cheaper even than the Doctor Who episodes that made it across the pond by the early 80's.

The TV show's many fans would have disagreed with me. And seeing that the series lasted for a whopping six seasons and over twelve hundred episodes, there were and are quite a few of fans. If you are seeking any of those episodes out, you'll find a mess of them over on Hulu (and a few choice bits on YouTube).

There were three resurgences of the series: in 1991 NBC put on a 13 hour, 12 episode miniseries recasting of some of the most popular storylines in new format with new actors. In 2004 the WB tried to bring it back again, but while the pilot was shot, it never aired. And then in 2012 Tim Burton and Johnny Depp got their grubby little paws all over it, possibly putting a stake through its heart once and for all.

For this review I sat through two of these episodes, the first and episode 211, the one where Barnabas Collins makes his first appearance. They bear the hallmarks of both the era and the soap opera genre. The music is the best part of it, as the TV studios of the time invested in composers who knew how to work with limited budgets in the most efficient manner possible. And the acting is better than I expected. However the drawn-out plots about put me in a very "relaxed" state of mind and that's saying it mildly. They might be a cure for insomnia.

Gold Key put out 35 issues of a Dark Shadows book beginning in 1969. Then we skip forward in time, as this Innovation title came out in 1991. The Innovation DS series doesn't appear to have lasted into the double-digits. And while the pictures are warmer than their television counterparts, the actions is just about as dull. 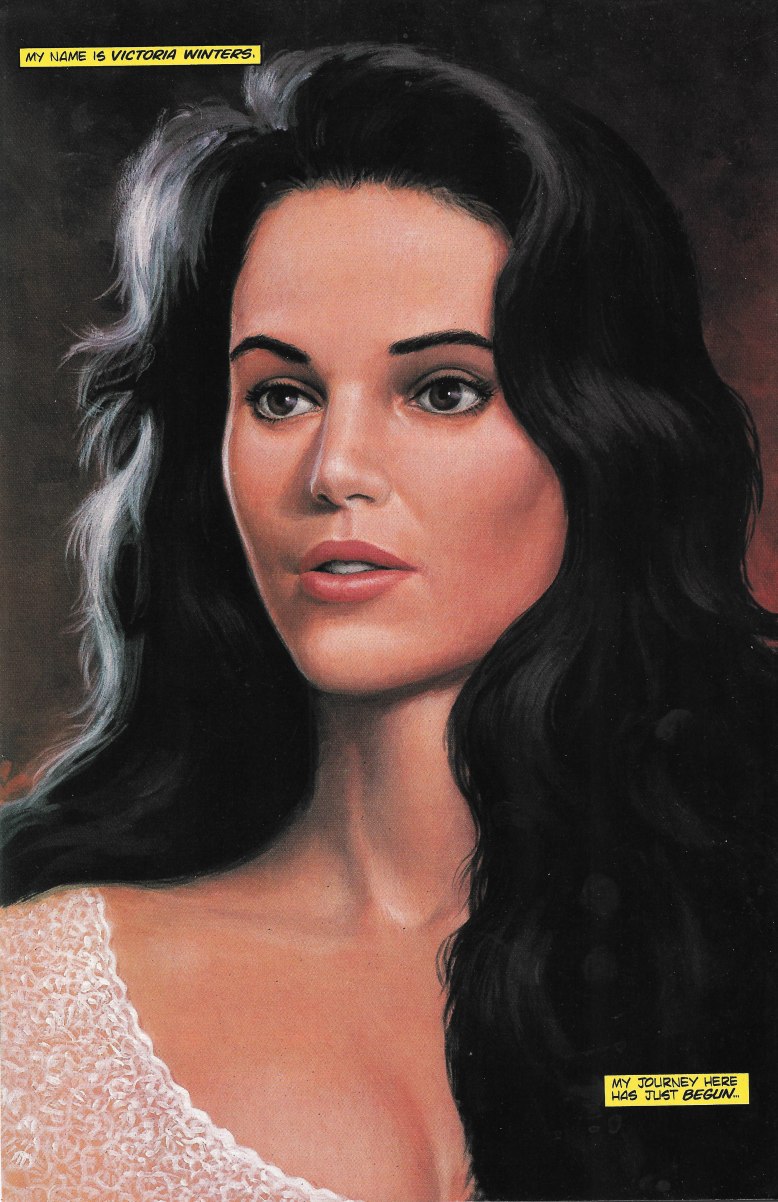 We being with three pages that mirror the exact wording of the first episode of the TV series, pages 2-3 a double splash page with a huge "tide washing over rocks" image just like the opening credit crawl. The woman on page one is Victoria Winters, the governess at Collinswood a mansion in the seaport town of Collinsport, Maine.

Victoria felt drawn to Collinswood in order to, *ahem* find herself in episode one. Then for about 210 episodes she was the focal point of all the ghosts, witches and strange goings-on at the Collinswood manor.

Then everything changed with the arrival of this distinguished gentleman… 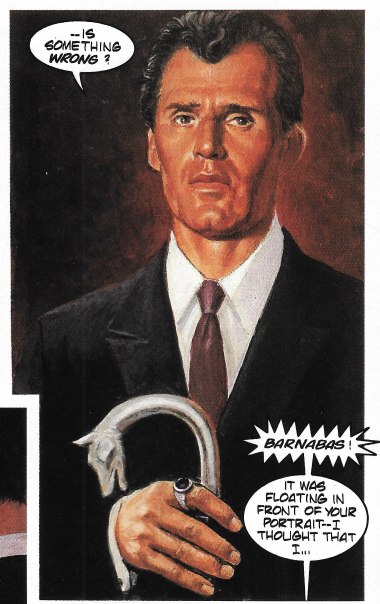 Meet Barnabas Collins, ladies and gentleman. Barnabas disguises himself as a businessman who only comes out AT NIGHT. He looks EXACTLY like the portrait in the main hall, right down to wearing identical jewelry.

He also knows little of current technology…like those crazy "Aught-toe-moe-beels." 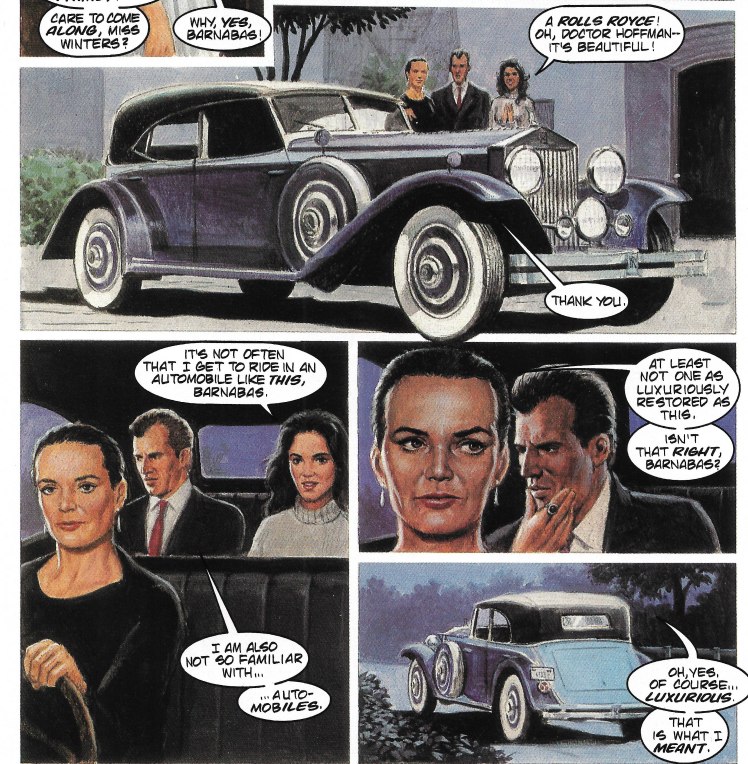 The thing I love most about this is Victoria. She has met with so much supernatural higgly-piggly by now that she should have a second sense about things being off. But no, no clue here that Barnabas is actually…DUH-DUH-DUNNNNN! A VAMPIRE! (cue creepy theremin music here)

The tight-haired doctor driving in the above is Dr. Julia Hoffman, a research scientist whose favorite libation is a tall drink of "Collins," and I ain't talking TOM Collins. She's pined after him for years, found out he was a vampire, decided it made no difference, almost been killed by him for knowing, decided that was okay, helped him out and is currently working to cure him of his vampirism. Cause she luvs him.

Barnabas friend-zoned her early because he's pining for his love, who looks to have a descendant in the waitress at the town diner, but wooing said waitress hasn't proven to be successful since the ghost of his love always comes back and protects the girl from being bitten and…yah know? There were 1200 episodes of this crap going back and forth. There is NO sum-up in the WORLD that could ever do this justice.

Anyway for sake of bringing the audience up to speed, Barnabas remembers how Willie Lumpkin…wait, no! that is the caretaker from the Simpsons…Willie LOOMIS (sorry, you can see how I might make that mistake) releases him when looking in the crypts for the Collins family jewels. 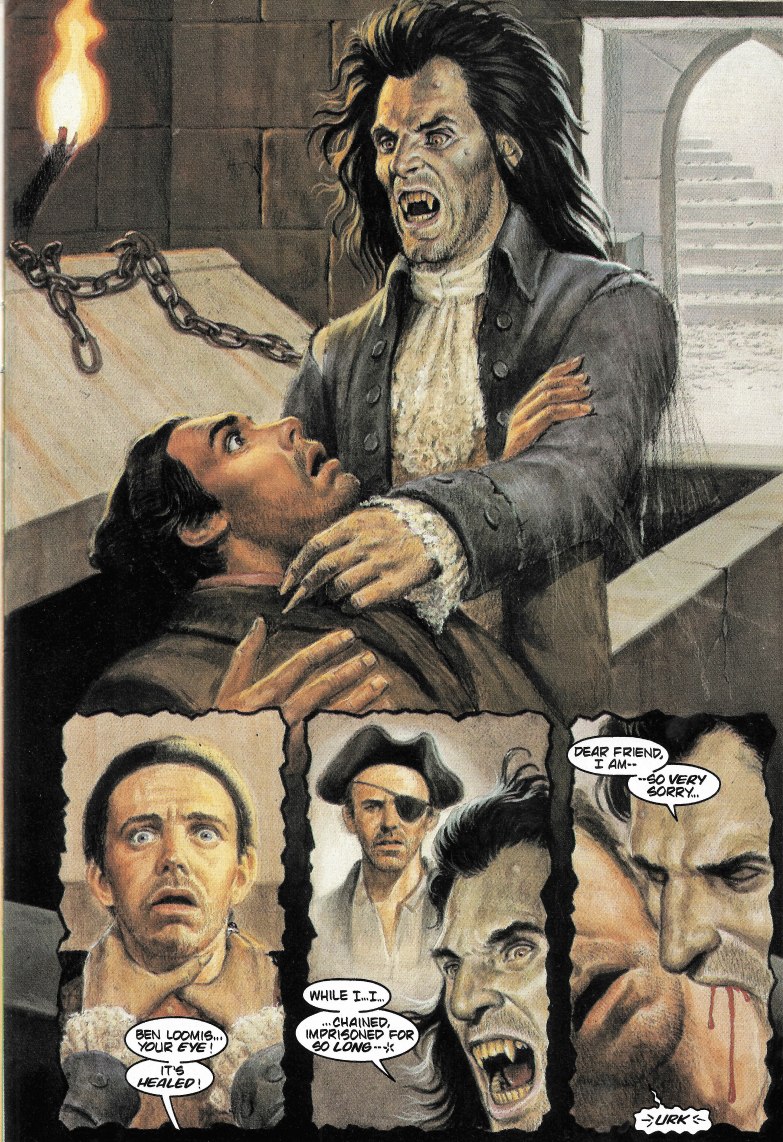 Loomis became a vampiric tool, much like Renfield in Stoker's Dracula, for the rest of his time on the series. Collins used him in the original series to catch up on things and to attack cows for blood. Not a joke, not an imaginary story. But those first few moments with Loomis were critical (and note the updating here, original series timeline was an awakening in 1966). 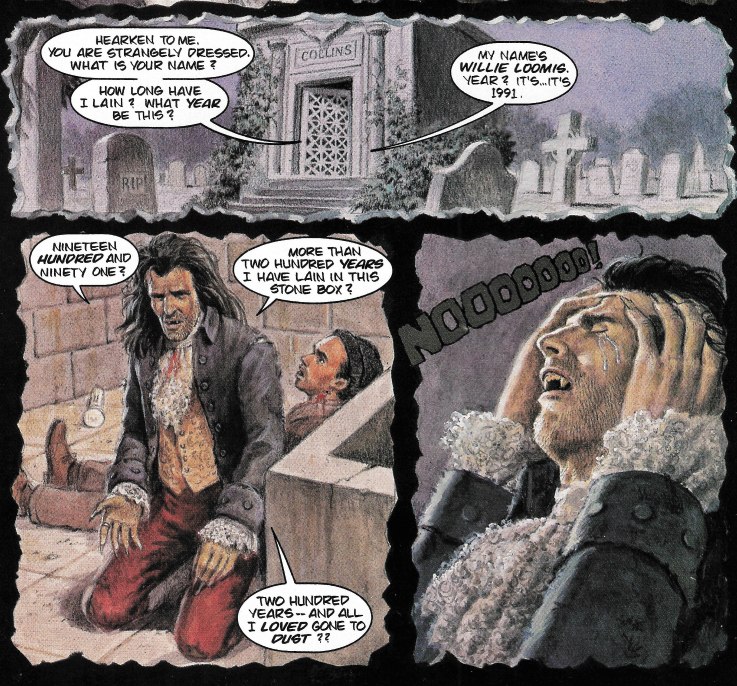 And all this reminiscing makes Barnabas remember his love Josette, who is now a ghost and…damn it! I'm doing it again! There is too much backstory here. Six years of it. Over 1200 episodes clocking running times of 21 minutes each. There is NO Way to encapsulate all of that. I need to stop!

Just concentrate on what is HERE which is scenes like this: 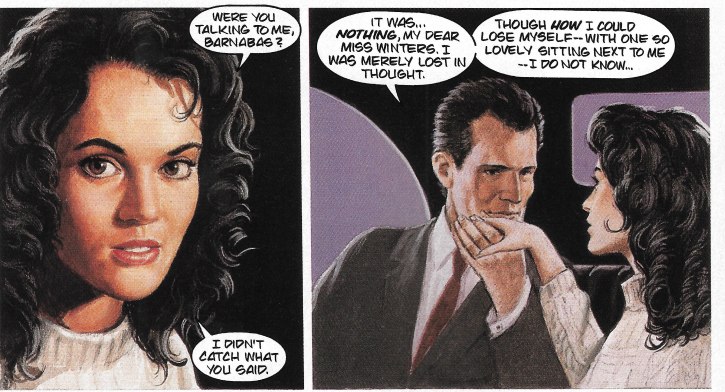 Dr. Hoffman's stern disapproving glances from the front seat friend-zone ending Barnabas's moves like she is vampire-bite-cock-blocking him.

Soon-to-be-lunch walk-on washer woman Martha being in the wrong place at the wrong time. Namely being at Dr. Hoffman's laboratories lavatory (extra points if you can say that three times fast) on the weekend.

While Barnabas is out of the room for a little "snack," Victoria is causing trouble in Dr. Hoffman's lab. This is her opening a box of lab mice… 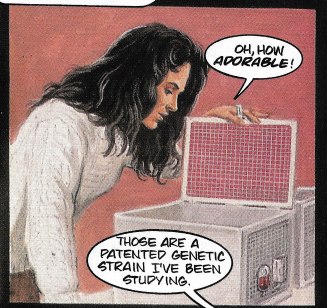 …who've been infected with vampirism.

Maybe she shouldn't be handling those and causally sticking her fingers in the box with them? Or maybe Dr. Hoffman should put locks on those cages?

You want vampires? Because that's how you get vampires? 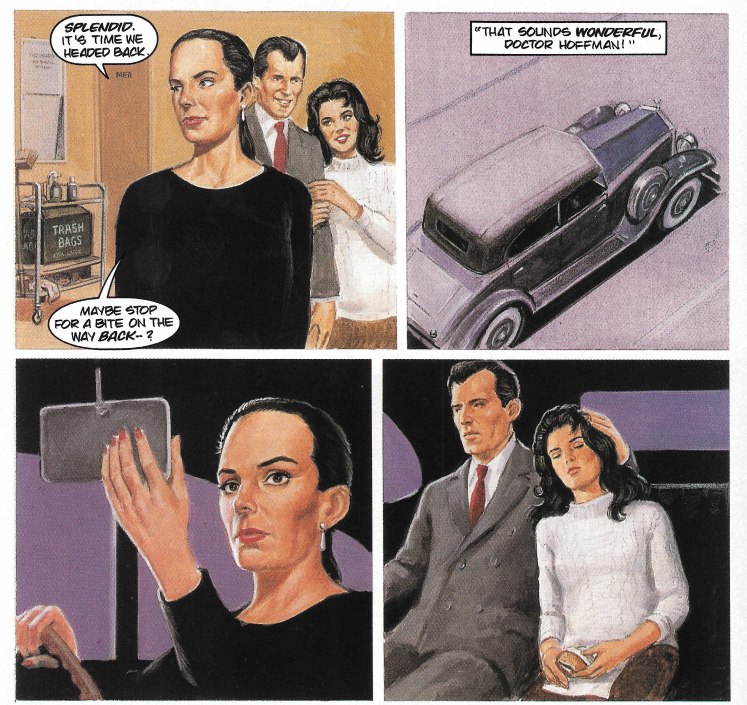 Speaking of bites, Barnabas finishes off Martha and Dr. Hoffman notices her absence on the way back out. She's also none too pleased with how close Victoria is getting with Barnabas…and HEY! Is that a hamburger in her lap? WTF? That's a Rolls Royce you're in. Show that car some respect.

Anyway, Barnabas remembers more things he had to learn from Willie-boy and then we are treated to what amounts to a walk on by some of the other cast members… 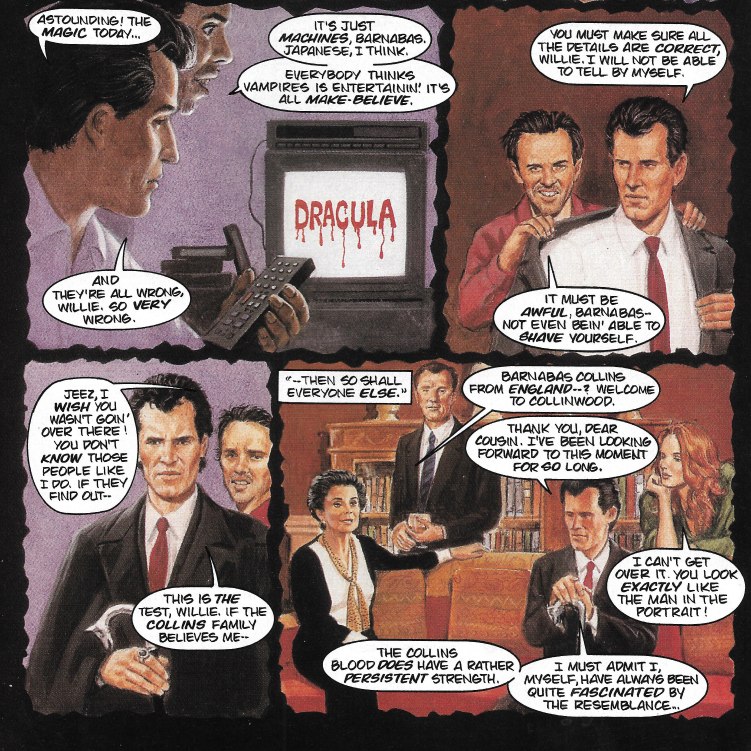 …who are all present when they drop off Victoria… 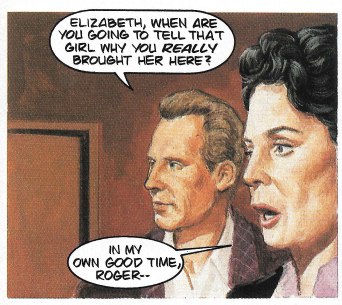 …who apparently have had secret reasons for asking her here all those years ago that do not include taking care of their kid. I wonder if that was in the original script. I would have found that so, so funny. A plotline left dangling for six years and over all those episodes and they never resolve it fully. You'd never see a current TV show do that… 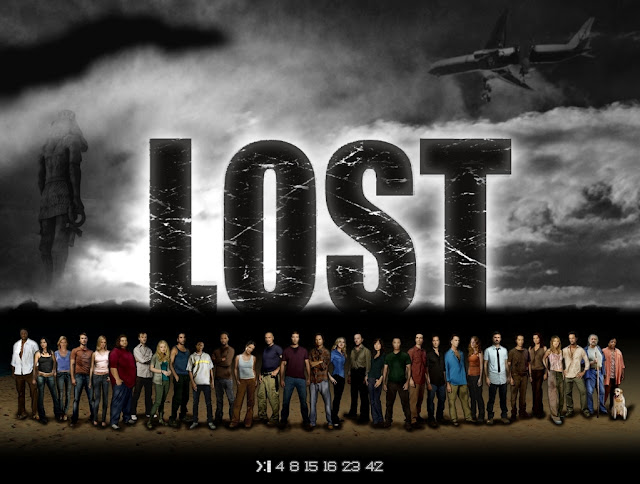 …okay, I'll plead the fifth on that one. 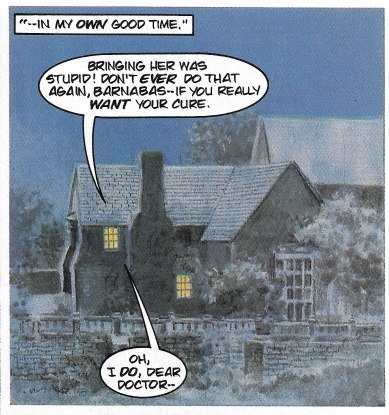 Then she says that there might be someone in Barrettstown that is as old as Barnabas. Someone that might be able to help him and, in a two page spread that probably encompasses years of soap history, she says that this extraordinarily long lived person is someone in her family. If Barnabas wants his cure…

There is something familiar about that pose. It kinda reminds me of… 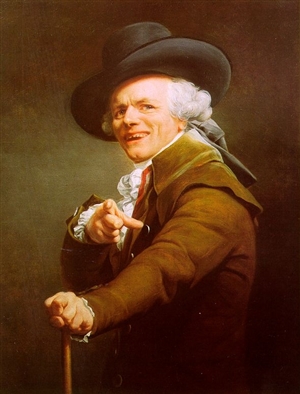 …anyway, back to the story already in progress. So Barnabas goes into detail about how to make a new vampire. It’s the "small sips over time" routine here…. 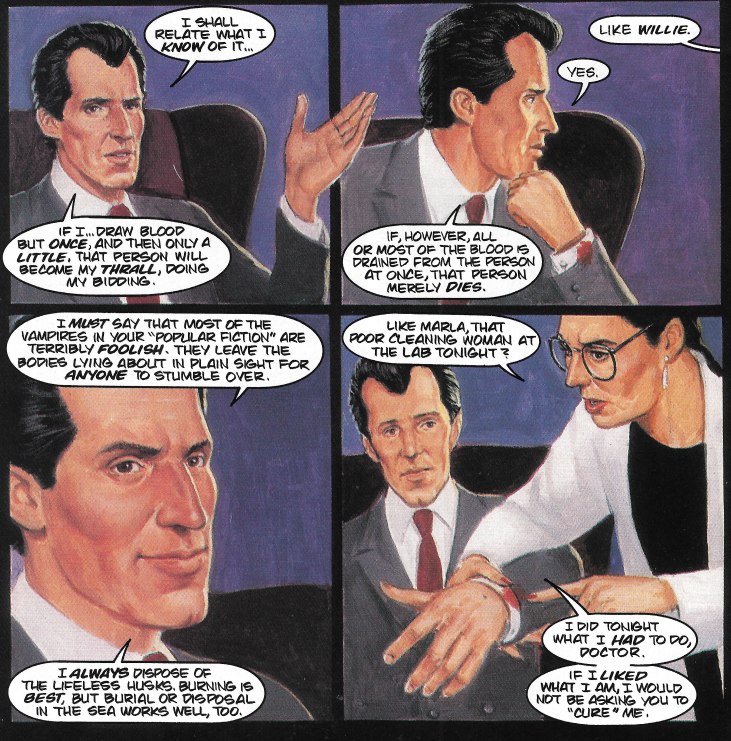 …he gets caught coming out of the kitchen with cake frosting all over his fingers though as Dr. Hoffman points out the blood on his shirt sleeve. Next they discuss this other woman that Barnabas made into a vampire years ago…and blah, blah, blah…sheesh. I didn't think vampires could be made boring.

But that's what Darks Shadows is to me: a huge, huge bore. Steer clear of these unless you are a super big fan of the soap opera.

Posted by SonOfCthulhu at 2:18 AM