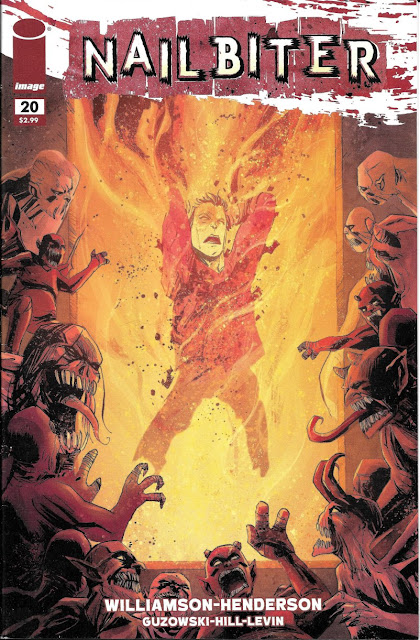 The most Lovecraftian, non-mythos of this entire bunch

I'm going to cover thirty-one books before Halloween hits, several of which directly reference or are influenced by the mythos created by Howard Phillips Lovecraft. But out of all of them only this one creates those same prickles of fear that his work properly delivers without one syllable of any elder god mentioned.

And it is books like this one that make the Crapbox experience so frustrating. This is a hugely engrossing storyline in a book that is well done and genuinely frightening. There are several points in this work that I was stunned at the story. Even with me coming in so late and still working through what was going on.

Nineteen issues in is a long way to play catchup. Not to mention a lot of issues I will now have to track down. Or find if they were traded.

Because Nailbiter is just that damn good. Also MAJOR SPOILERS! You've been warned. These are good. Go get them before reading. Or read knowing you will have stuff spoiled.

Here's our setup: There is a town in Oregon called Buckaroo that has produced sixteen of the United States worst serial killers. The latest, called "Nailbiter" because he was known to bite the fingernails off his victims, was recently caught by FBI agent Charles Carrol. However Carrol goes missing and his buddy NSA agent Nicholas Finch sets out for Buckaroo to find him.

Along with the help of Officer Abigail Barker, he does just that. However Carroll has been mutilated by another psychopath, having had his arms and legs cutoff. 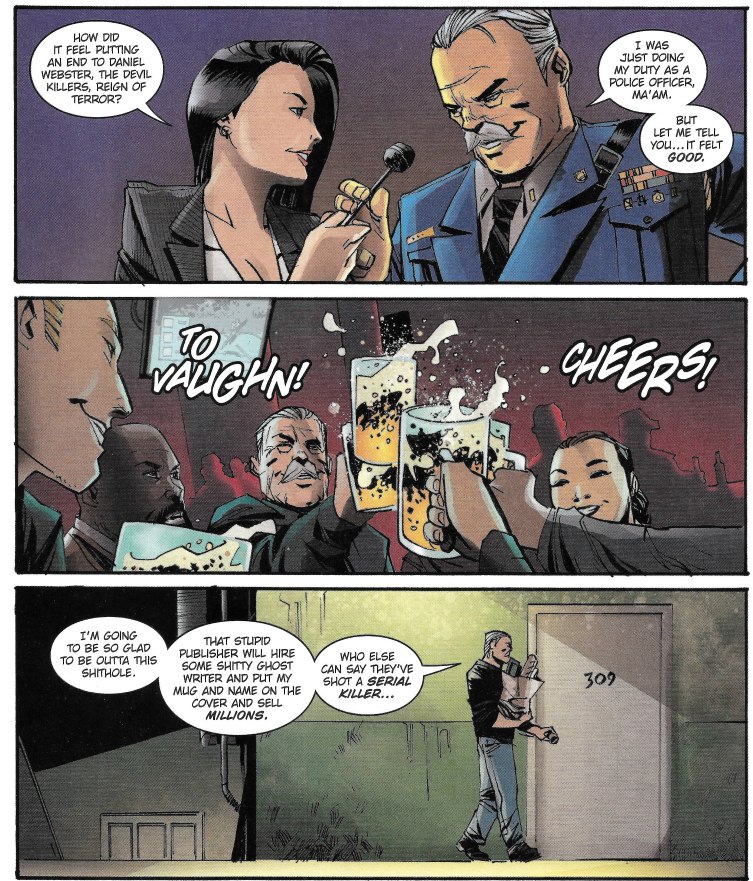 We pick up somewhere after that, with this Officer Vaughn receiving a very public reward for bringing in a different serial killer, one "Devil Killer." Vaughn seems like an okay guy, if a bit of an opportunist. What comes next is a bit of a shock as when he returns home, Finch and Barker are tearing his place up looking for evidence.
But evidence of what? 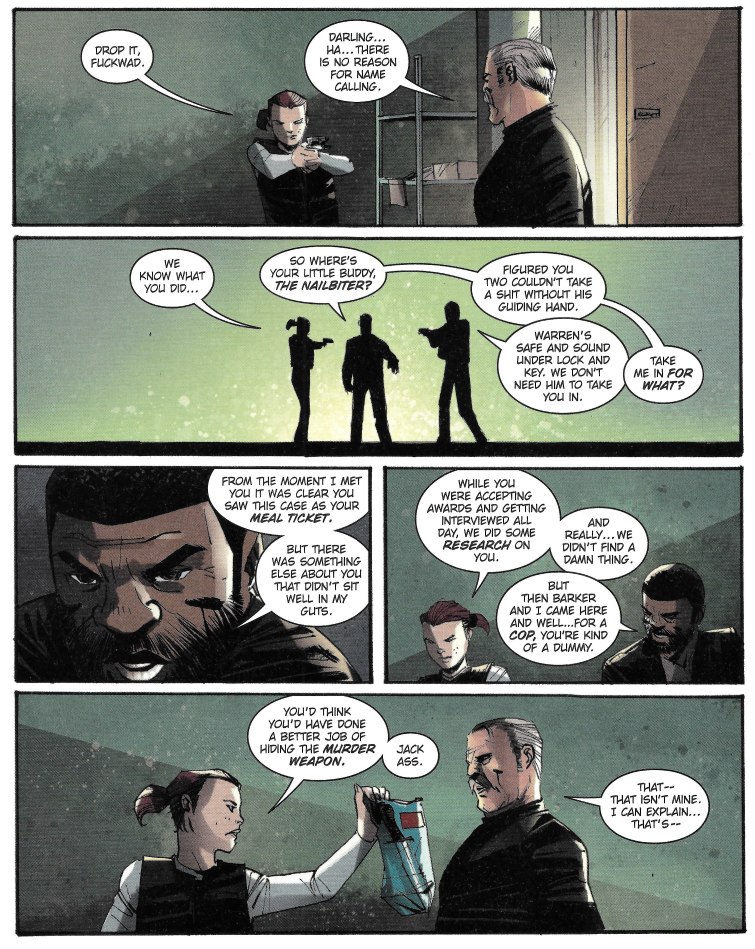 Looks like they came in here on vague suspicions but have found something of importance. Vaughn is pretty pissed about them being there and drops a bunch of F-bombs, as you can tell, but when confronted with the evidence he comes along quietly. 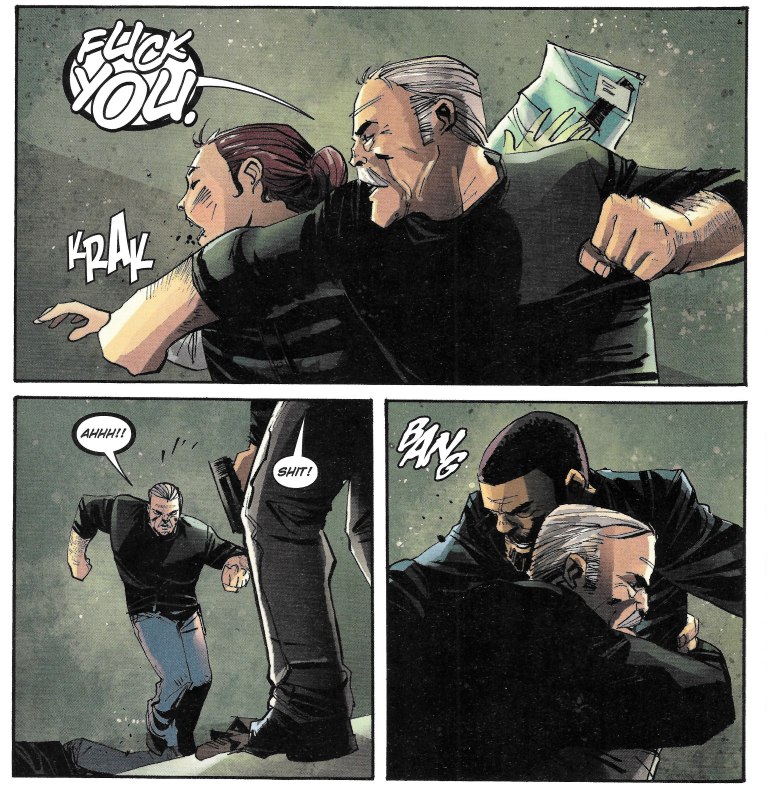 Okay, not that.
This fisticuffs does lead to Vaughn providing a clue to why he has been killing people. It is also the point where the sanity train leaves the tracks completely. 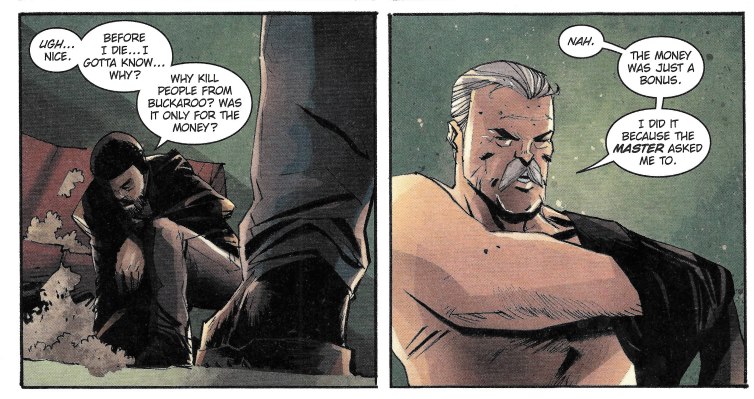 What the Hell is a "master"? 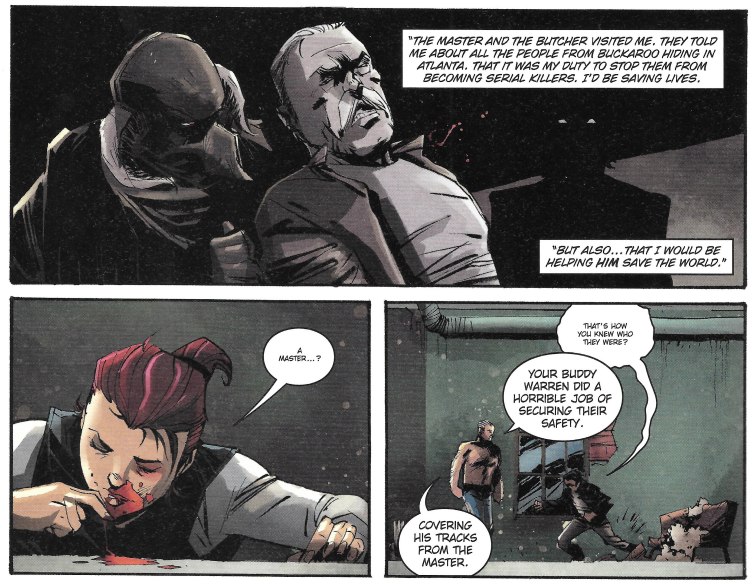 Okay, it is some kind of psycho hypnotist who makes people think being a serial killer is somehow heroic, but why does Barker seem to know about them? Also it appears Vaughn was the serial killer he was supposed to have stopped, the "Devil Killer." Nothing is stopping him now though, and it appears he's gonna kill Finch. 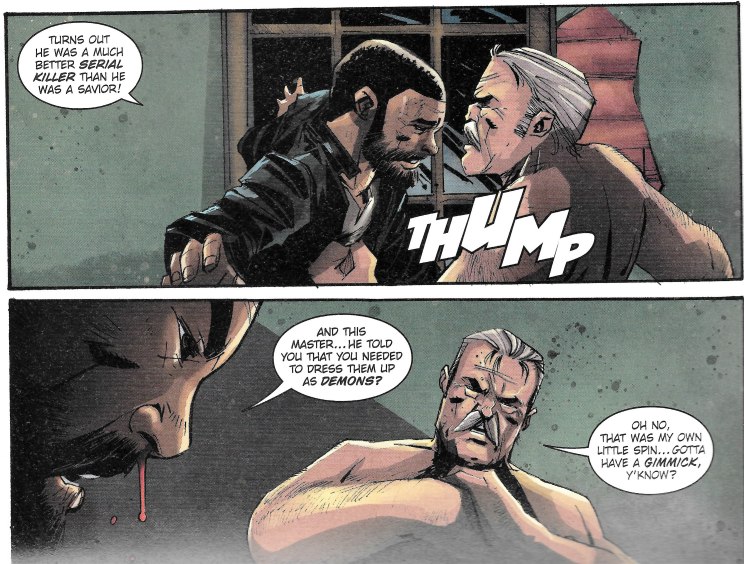 Until Abigail cuts in, that is. 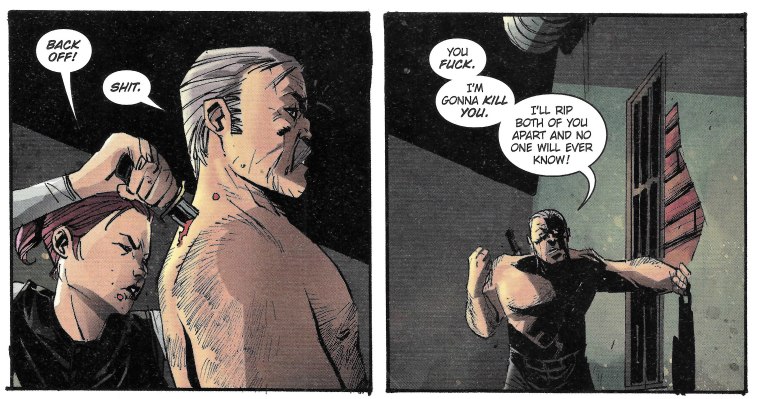 They still might be in trouble as Vaughn doesn't appear to be stopping. That is until Vaughn looks out the window and sees he isn't getting away. The police have the place surrounded, meaning Finch or Barker must have tipped them off. 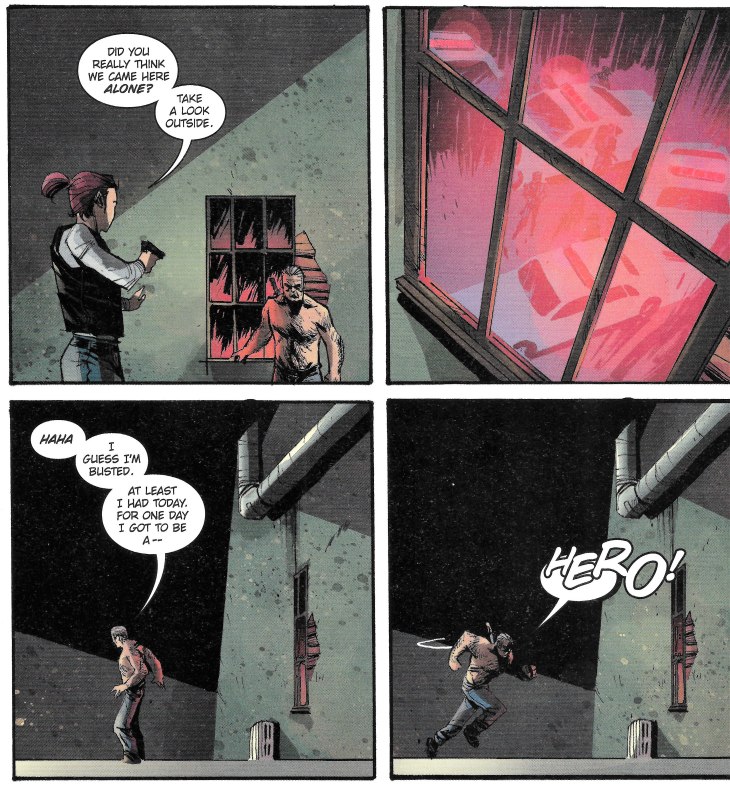 Vaughn knows when he is beat though… 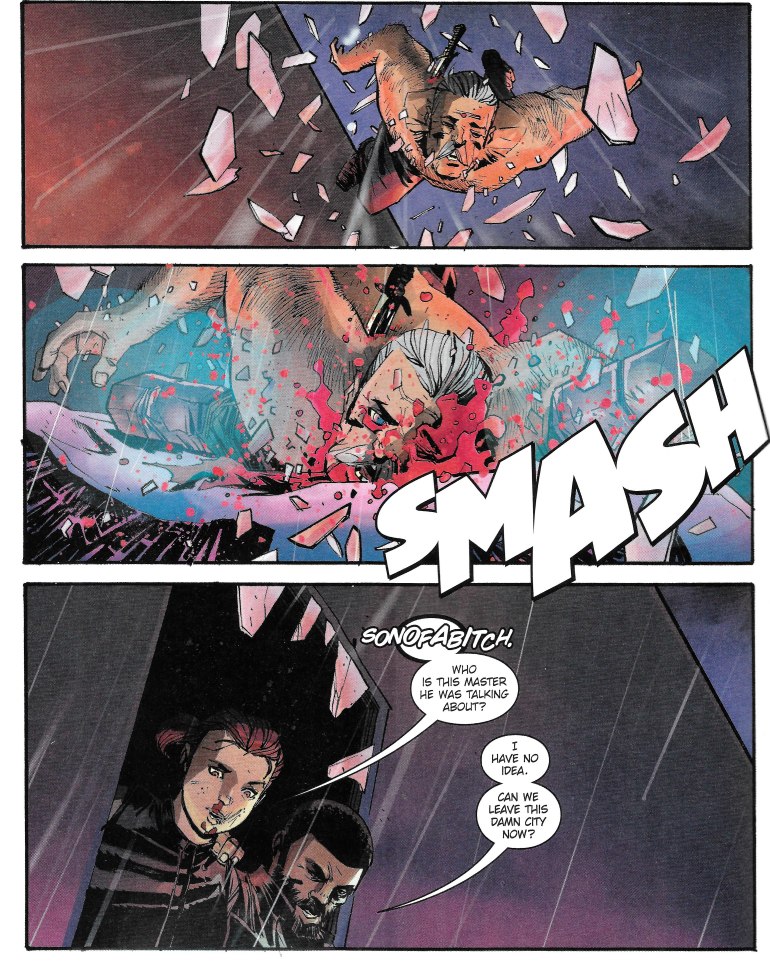 ..and he takes a very literal dive out the sixth story window, leaving one smashed up police cruiser and lots of unanswered questions.

It's safe to say that by this point I'm hooked. A mass of serial killers being created by one guy? One person with the power to influence people enough to drive them crazy? That totally sounds like the work of a universe that is just as unkind as Lovecraft's.

There is a side story here about teenage girl in a Buckaroon hospital room waking up from being injured. Seated by her bedside is a woman I can only assume is an officer. This officer is remembering when SHE was approached by someone who said they needed her help to stop all the town of Buckaroo's serial killers and she appears to be upset over it. Once the girl wakes, the officer has bad news about her parents.

The only thing I can deduce from this is that the officer must be one of these serial killers as well and she murdered the girl's parents to prevent them from becoming serial killers, which on the face of it is so crazy because the idea that this is making things safer is nutty. If everyone becomes a serial killer to STOP other serial killers…It's like Mega-Dexter, is what I'm getting at. 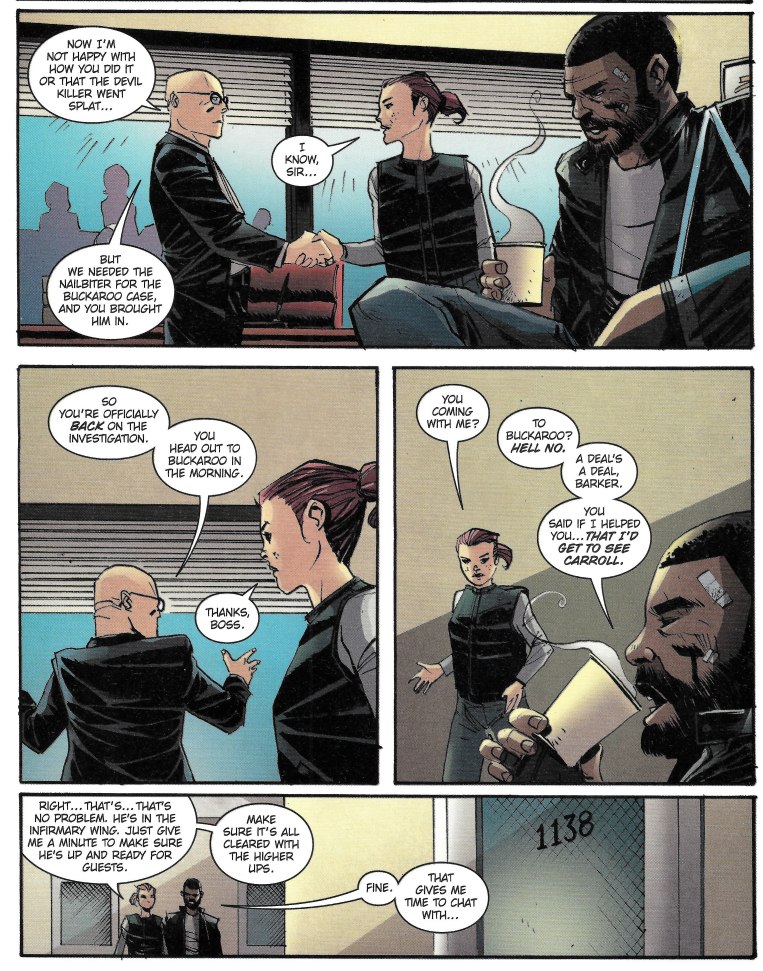 While Barker checks in on Carroll, Finch goes to see Nailbiter (Warren). 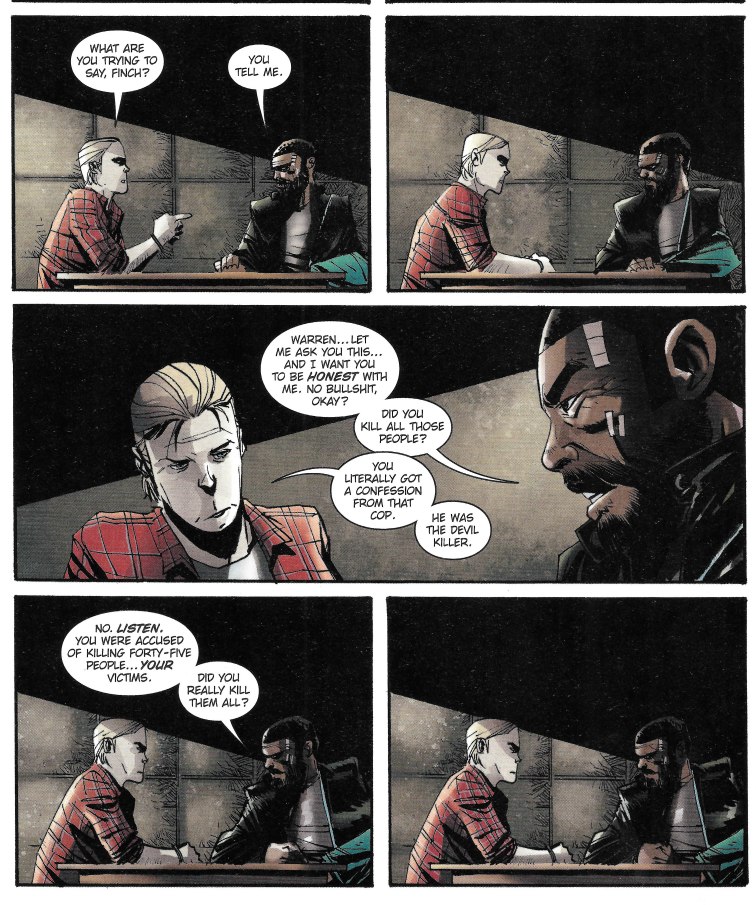 This is on par with all those Silence of the Lambs things. Appears Nailbiter helped point out Vaughn somehow. However Finch makes the realization that he can't tell when Nailbiter lying. Maybe he's not even the real Nailbiter. The whole thing gets amazingly complicated.
Which is exactly what Nailbiter tells Finch. And then he makes this prediction. 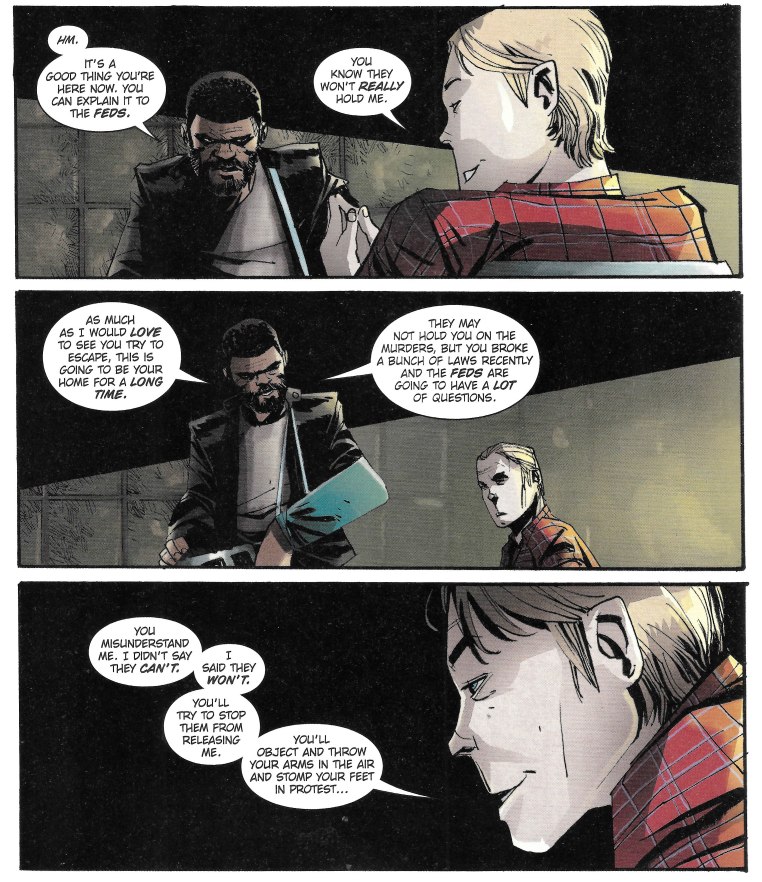 His reasoning is that the FBI doesn't want anyone to know about the goings on in Buckaroo. Finch looks worried that he may be right.

Meanwhile Abigail visits Carroll to see what info about Buckaroon she can ferret out before Finch gets a crack at his pal. 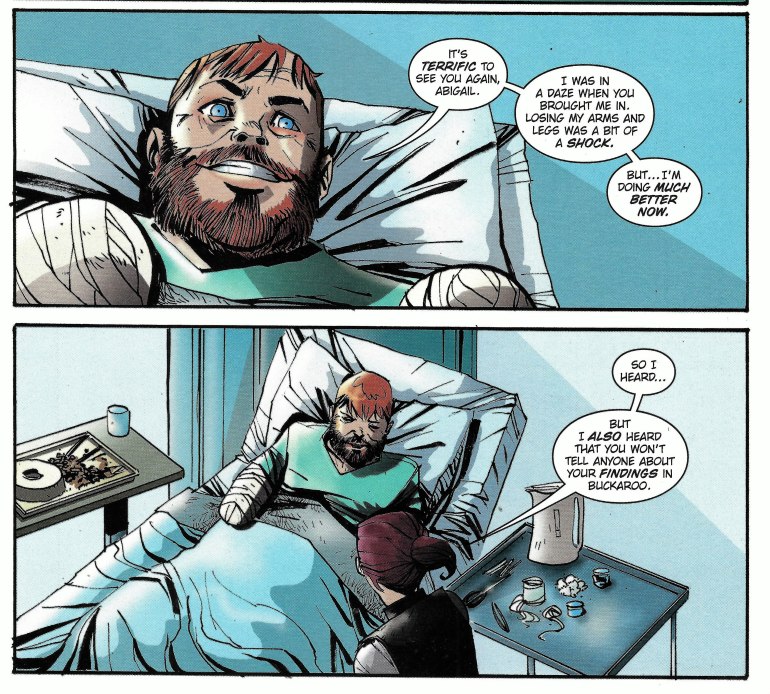 Carroll is resistant to telling her anything. His reasoning is… 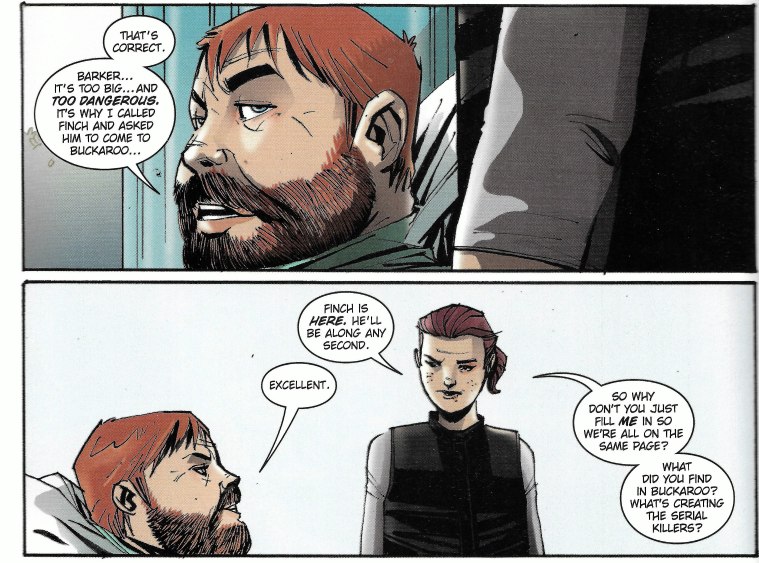 Which sounds pretty reasonable seeing as how looking into it got his arms and legs hacked off. He will share the info with Finch though, so it's all good right? 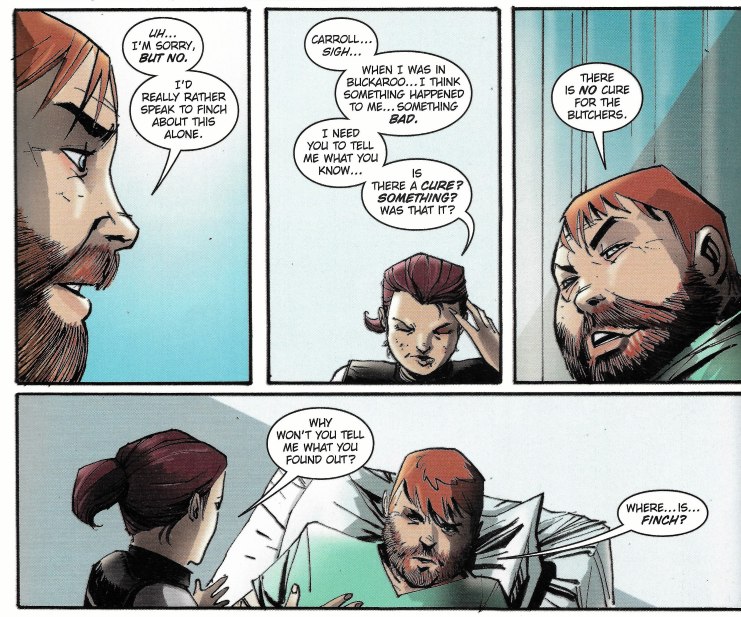 Seems Abagail wants to solve this one first. That's gutsy! Very determined of her to want to tackle a job most couldn't stomach.

Carroll isn't budging though. Finch is the only one he will talk to. 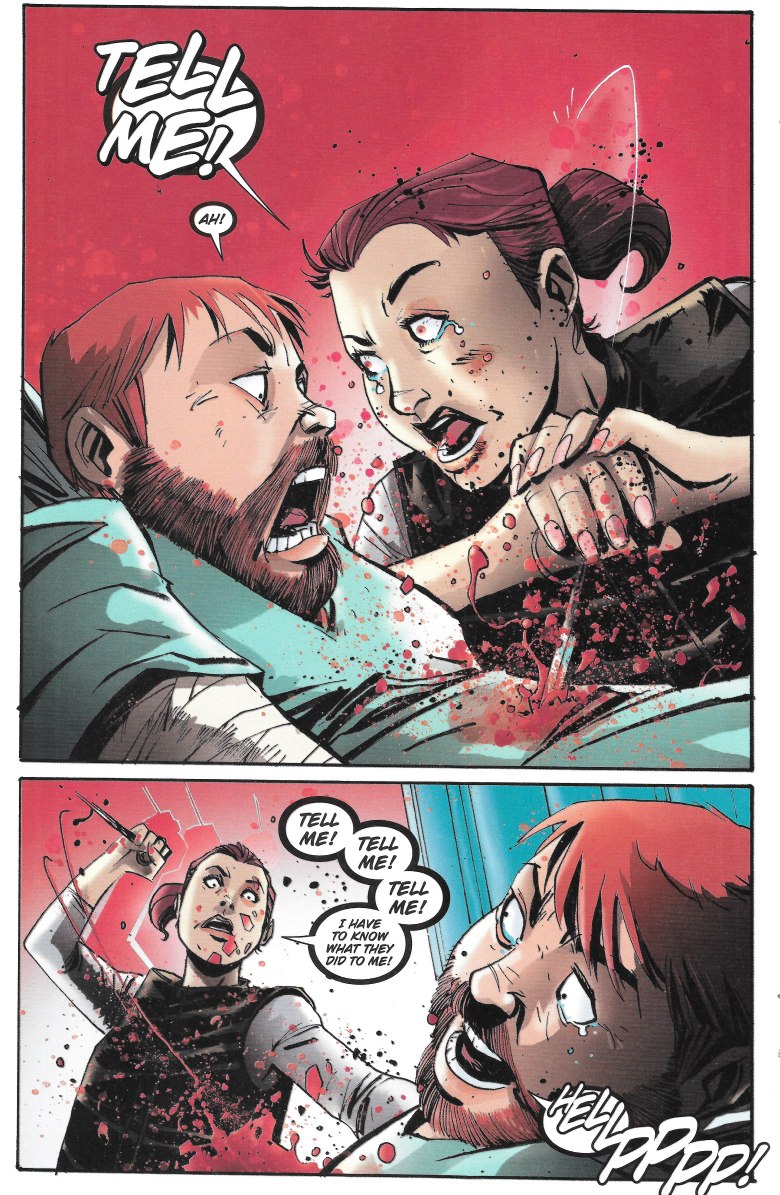 So Abagail guts him like a fish to get him to talk. 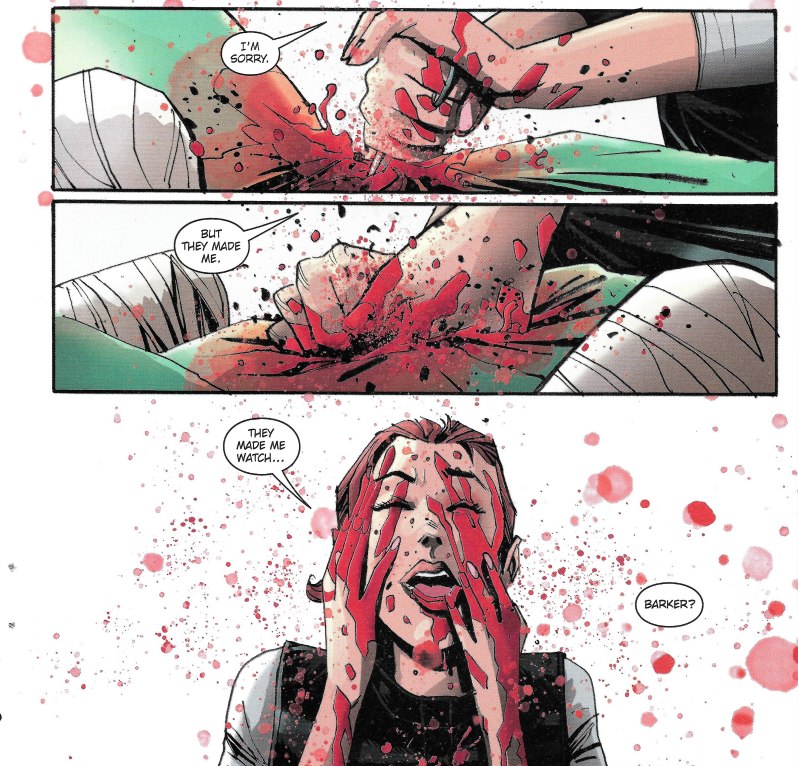 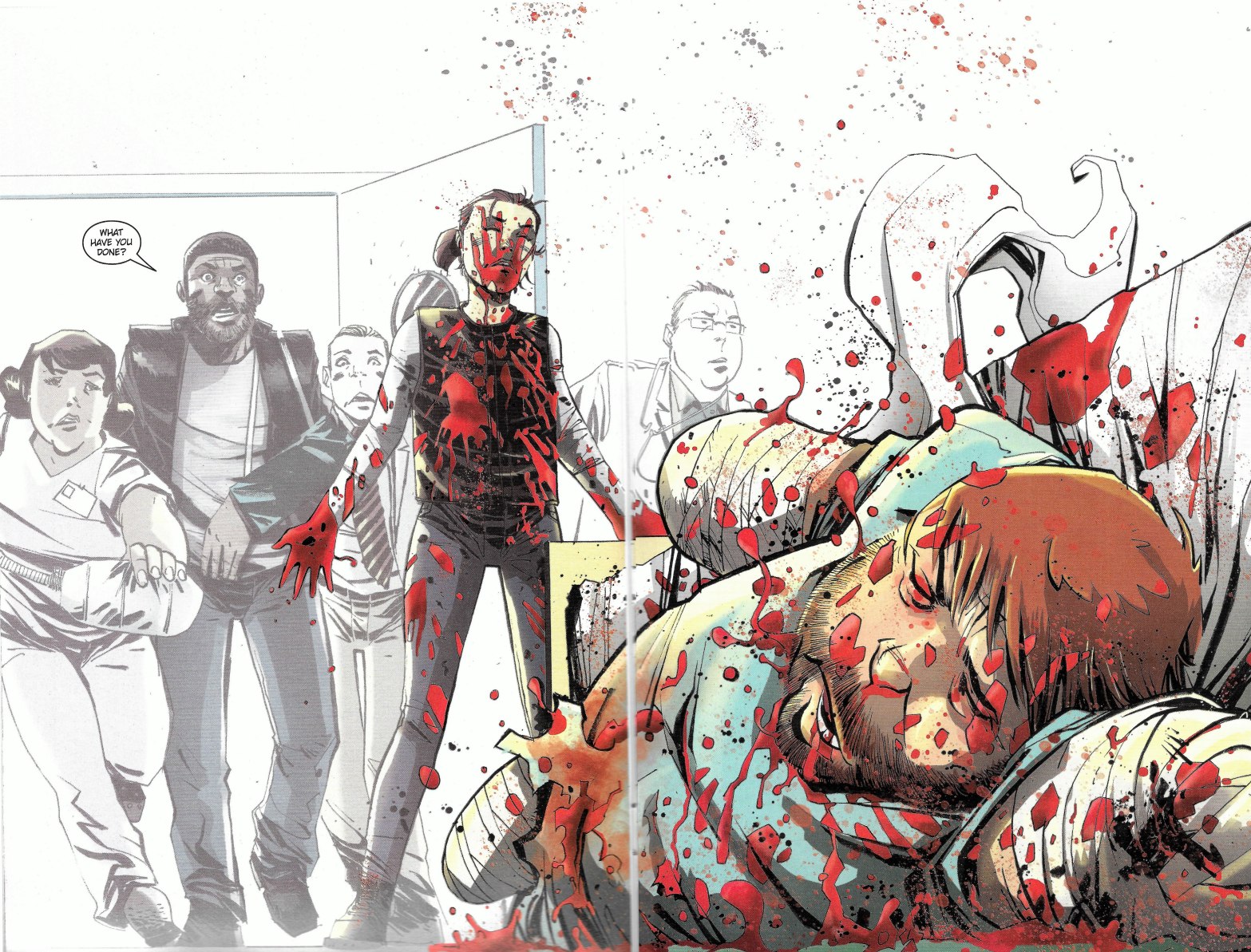 Yeah…that's the ending. The next four pages say "To Be Continued".

I'm in shock. That's high praise for a book to make me feel that after one issue. I mean they've flipped the world on me, but there you go. Amazingly good job.

We have Joshua Williamson to thank for the story in this and Mike Henderson for the drop dead gore-gous art. These are a keeper. Go get them or the trades right away.