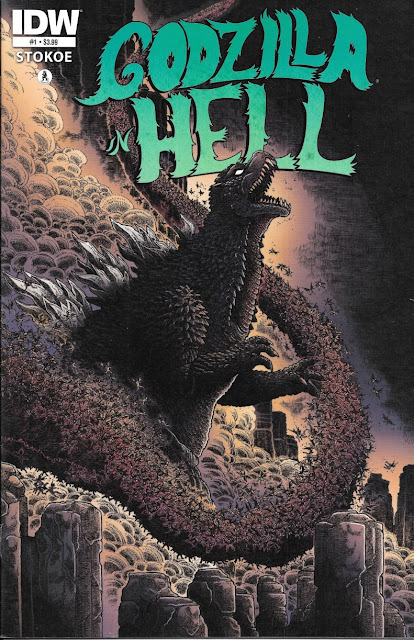 It's like I'm the commentary track on a silent movie

Say what you will about publisher IDW, they know how to license properties. Two publishers got to Godzilla first: Marvel in 1977 and Dark Horse in 1987. However both forgot to include one critical piece of ongoing licensing which would make the original series material extremely hard to market.

What did they forget?

They licensed the Godzilla name and likeness, but forgot to include the license for all of his wide array of Kaiju friends and enemies.

What good is a Godzilla storyline if he doesn't get to fight Ghidorah?

I mean that in a rhetorical way because the answer is clearly "not worth anything at all."

But IDW realized that. They knew when they went for Godzilla, a horror icon of giant dinosaur-lizard proportions who served as a living metaphor for the destructive unpredictable nature of atomic energy, that you had to also grab name-brand enemies for him to wrestle around with.

And they got them. All of them. So many, that they had six successful Godzilla series where he fought an armload of his celluloid besties and beasties. IDW had literally traded Godzilla issues almost as many times as he had feature films by this point.

And quite possibly destroyed the world six times or more.

What do you do next? I mean the license is right there!

And there was that one guy in the back of the room who always came up with the weird ideas. The one that transferred out to Archie after this was all over. You know that guy?

He speaks right up and says "Godzilla in Hell."

Sure enough, someone listens. Five issues are greenlit. Each with a different artist. And writer. And autonomy. And no over-arching plot. And no input between creative teams. And they fed everyone psychedelic mushrooms before allowing them to start the assignment.

Okay, some of that I can't really corroborate, but it seems LIKELY that’s how we got these.

They are five issues with different creative teams and from my several minutes of research at the discount store, each appears to be telling some story all of its own.

This first story…has no words.

Maybe that's an overstatement. The book has signs that have words on them, but no dialogue. We can take Godzilla's example here and fall right in. Because that's where the book starts, with Godzilla falling into Hell. 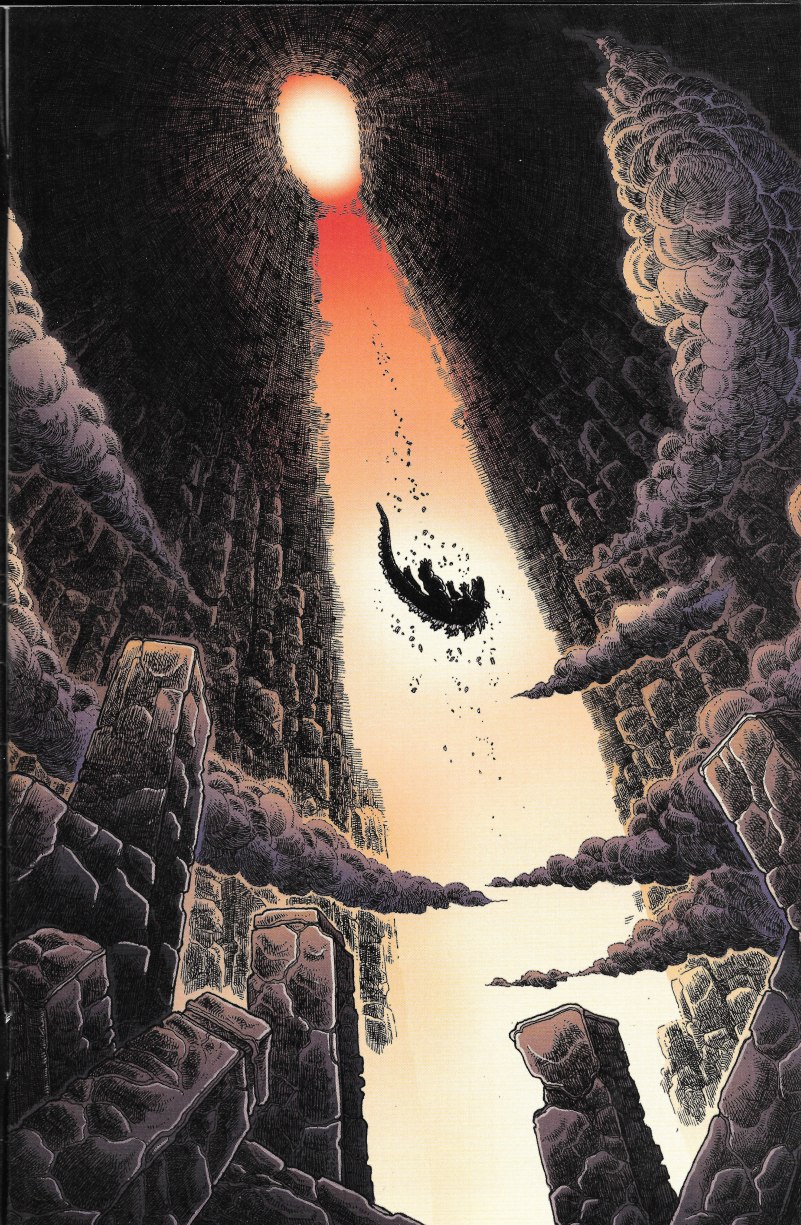 There is even big welcoming signs.

Yes, I grew up on Mad Magazine. How could you tell? 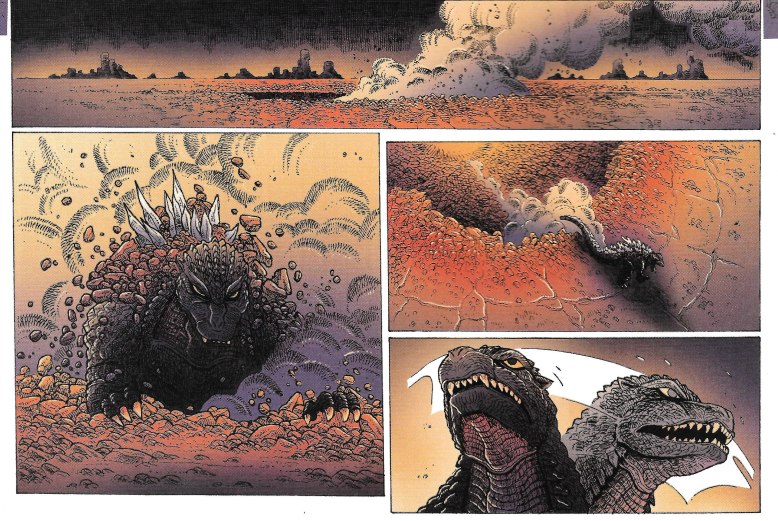 I have to state that in all seriousness I love the Richard Corben- Frank Quitely blend to the artwork. There is lots to love here…and equal parts lots to poke fun at. But the pictures are pretty. 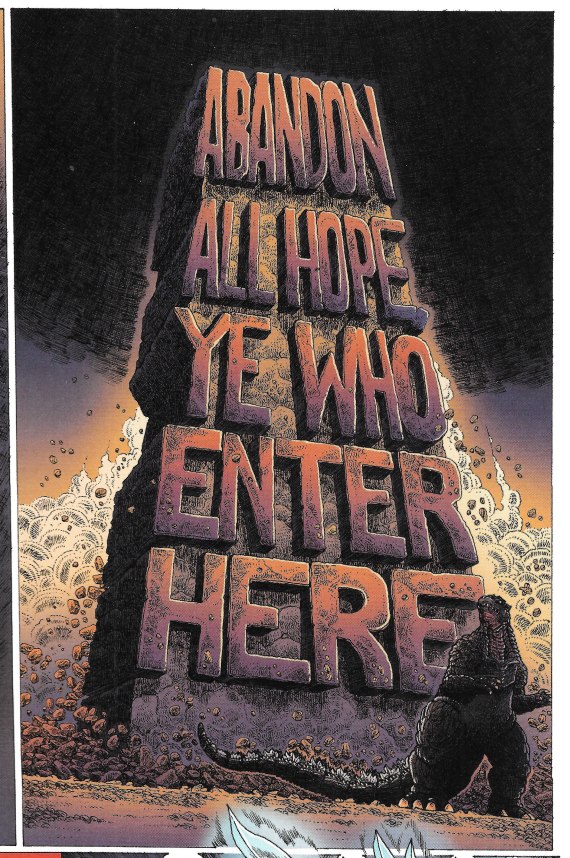 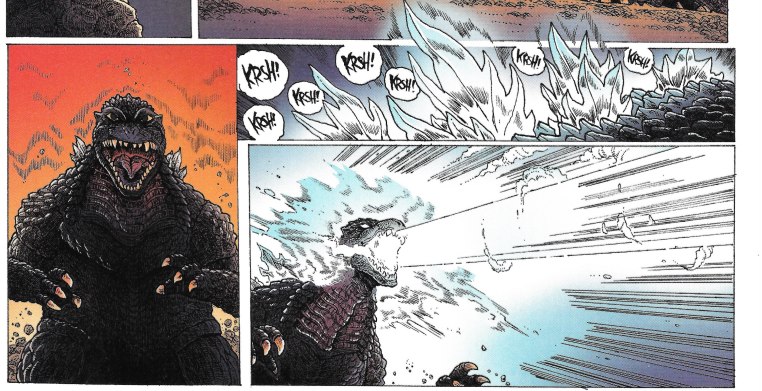 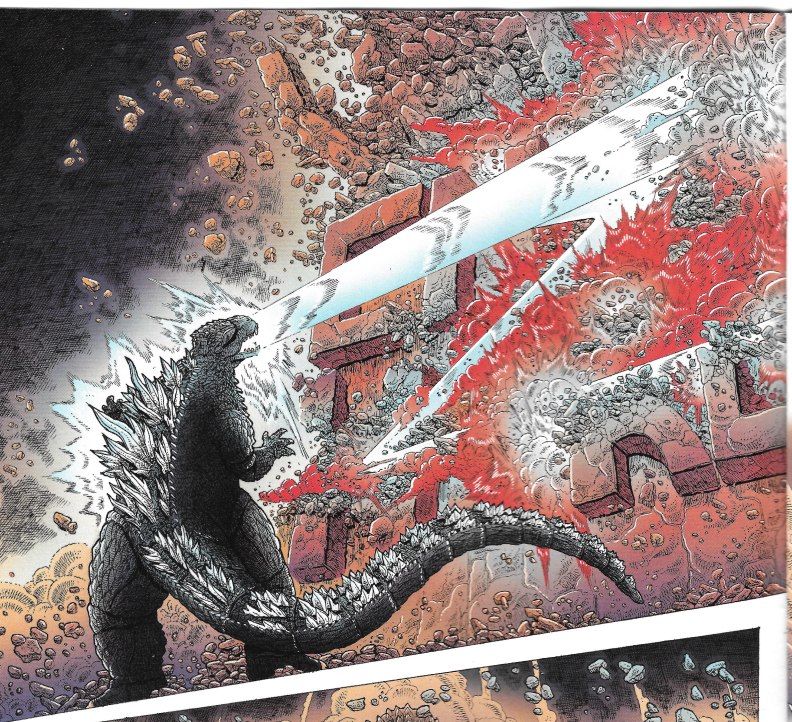 Silly stuff. Pretty. But still silly. The whole concept is so out there. And note the dust from the sign forms the word "Lust" here, which I take to mean Godzilla is in the part of Hell dedicated to his lusts. 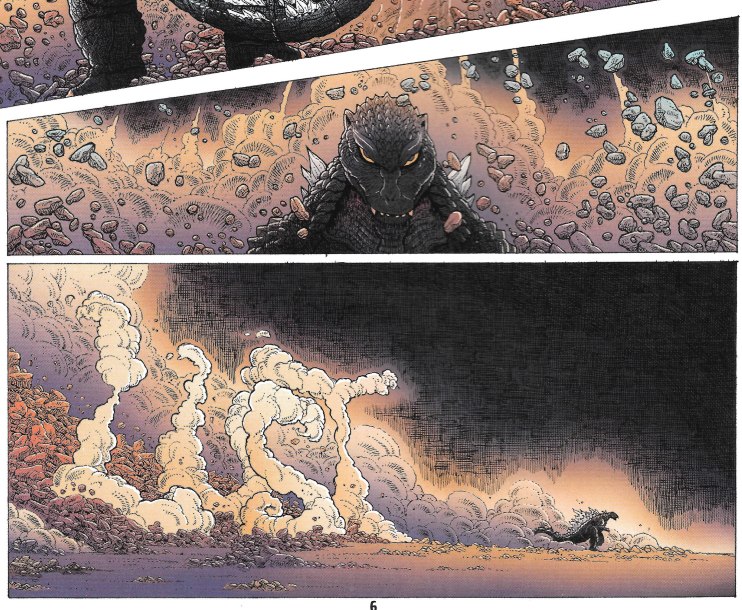 Like his lust for power, embodied by this atomic power plant. 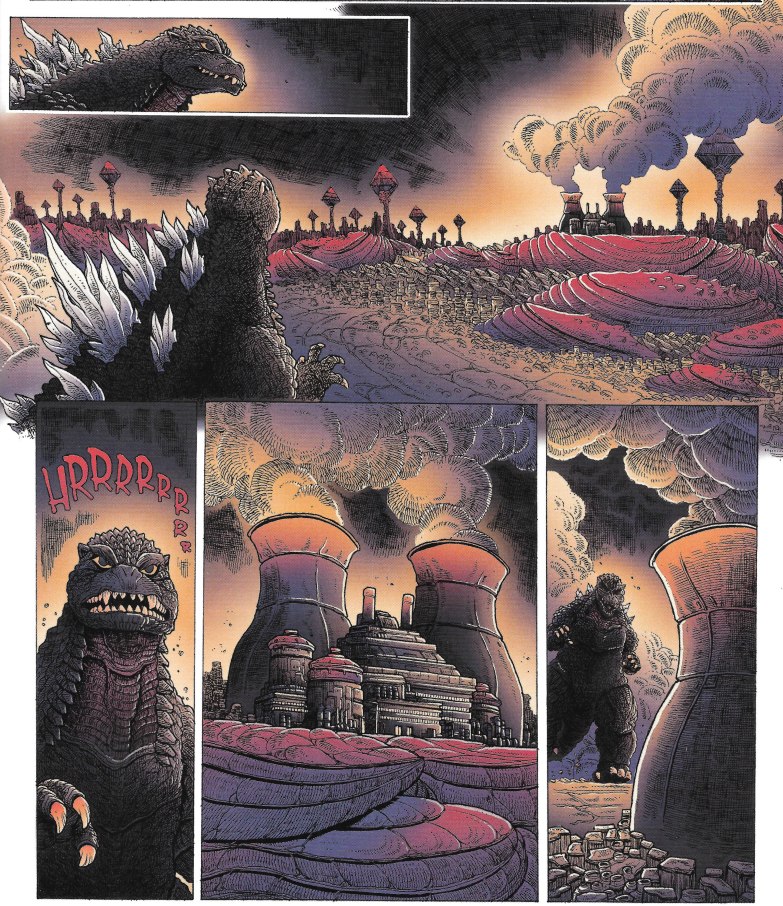 Which then turns into a monster and attacks him and must be destroyed. By the way, I love the look on his face in that middle panel at the bottom. The artist and writer here is James Stokoe and he has accurately captured the look of Godzilla thinking "Look at the sh*t I have to put up with." 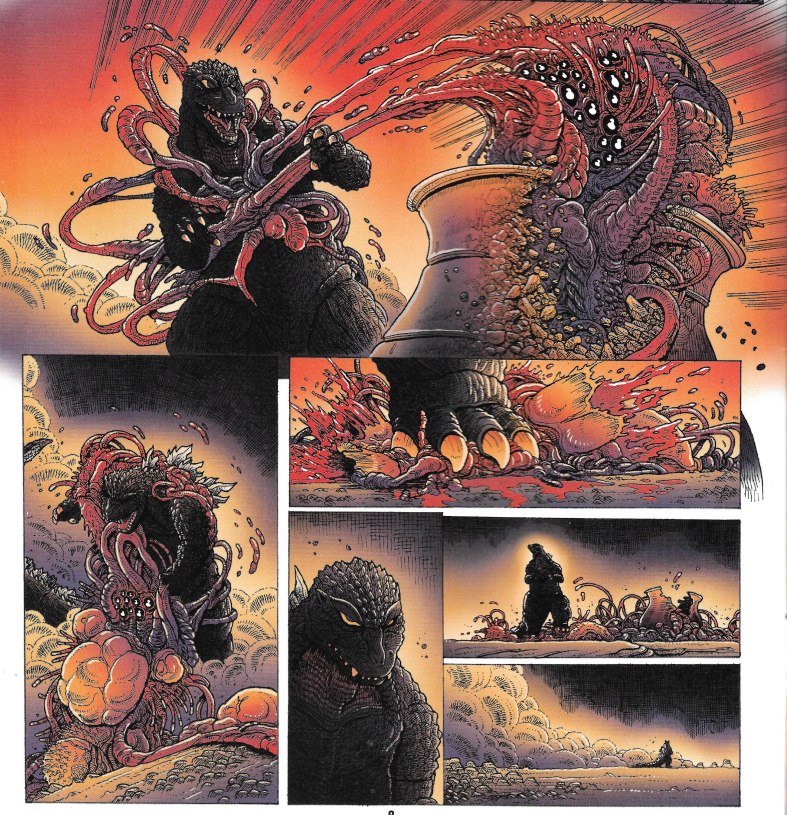 But enough of that! On with more things Godzilla lusts after. Like enormous clouds of dead bodies… 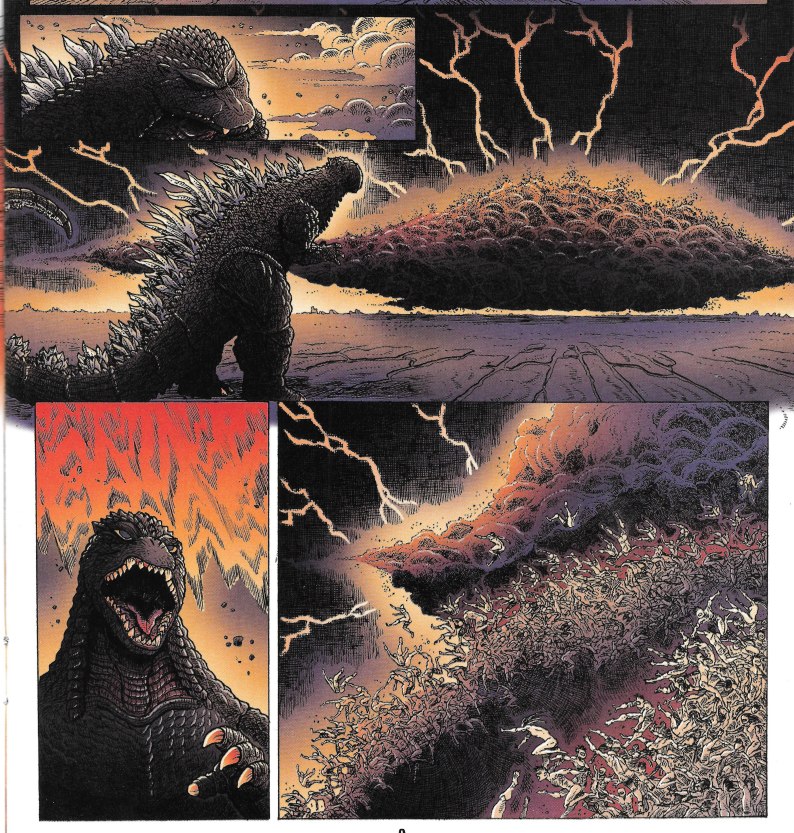 …wait? What? Maybe that is supposed to be symbolic of death and destruction on a massive scale. Not quite sure. 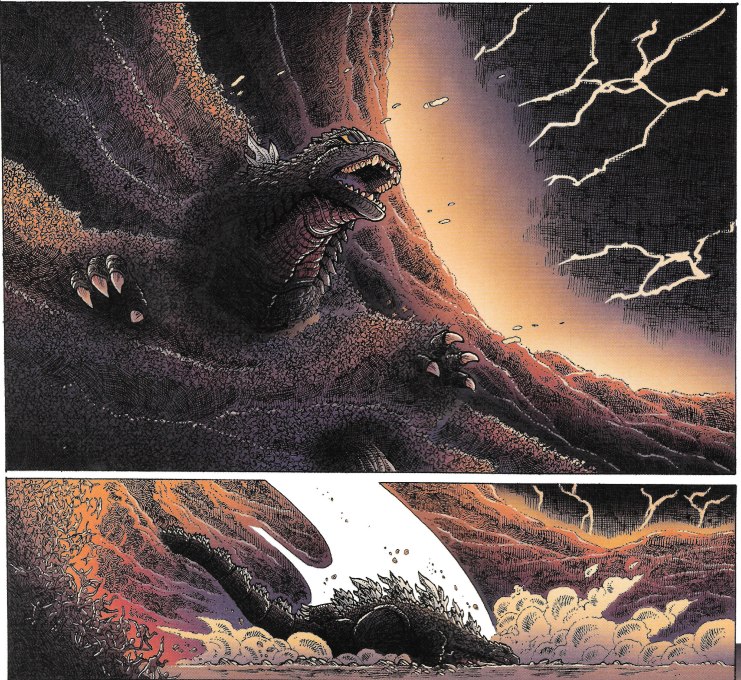 Godzilla just tears right though that mess after a bit. And then he is confronted by his most challenging lust yet. 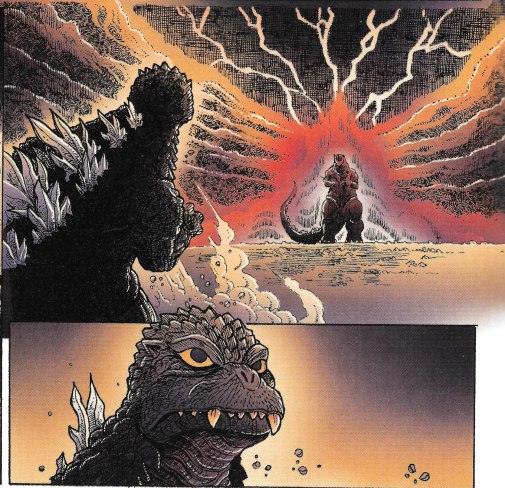 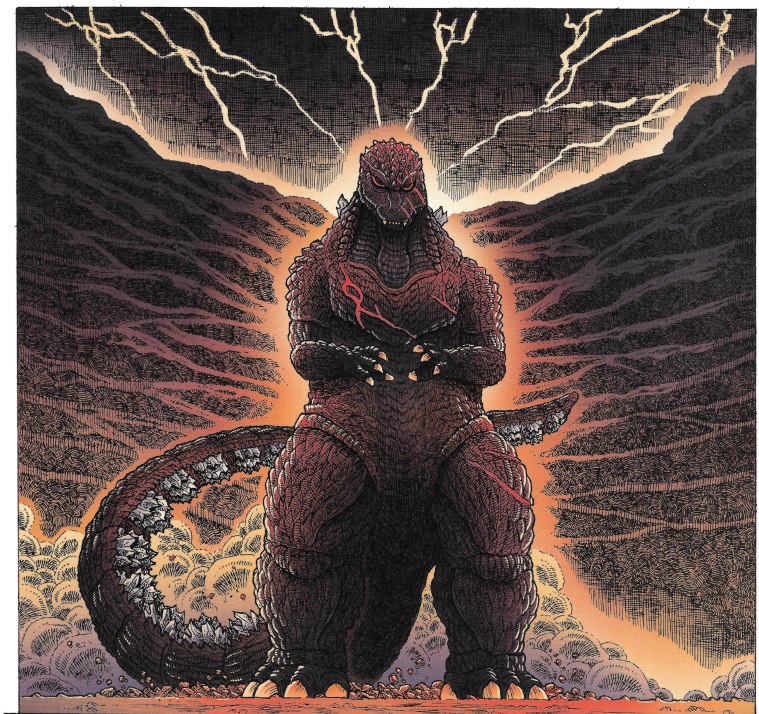 Or is that a She-Godzilla? (those look a bit like boobs, right?)

And the story doesn't tell me. What it does tell me is that when Godzilla gets close it surprises him by throwing him a birthday party.

Okay, not that. It surprises him by ATTACKING him. Nothing repetitive about this plot. *checks watch* How many more pages of this is there? At least it turns into this groddy John Carpenter Thing-like creature while doing it. 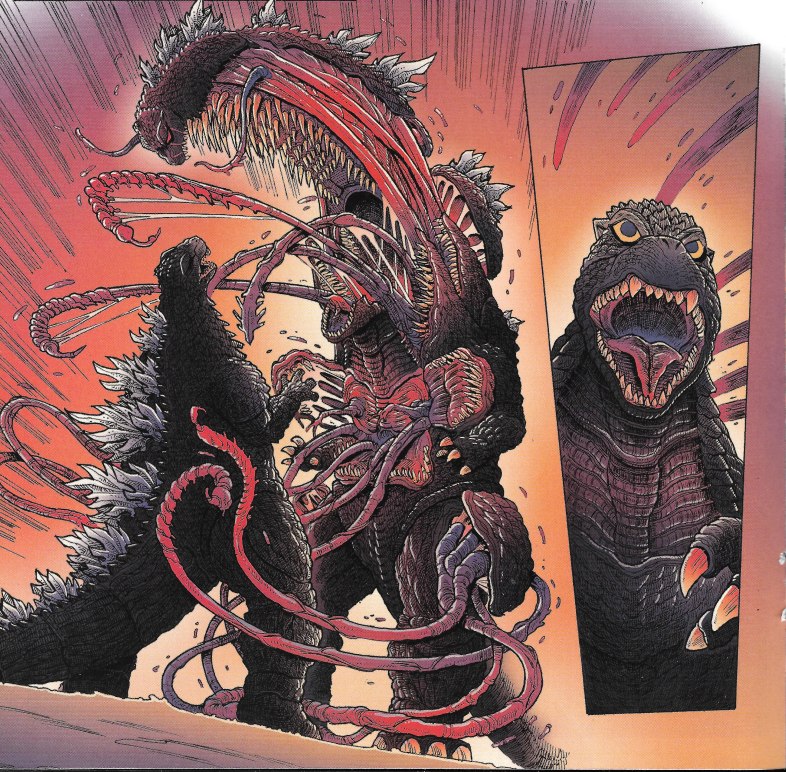 And in a series of panels I actually LOVE, it becomes a giant maw of teeth and starts dragging Godzilla in… 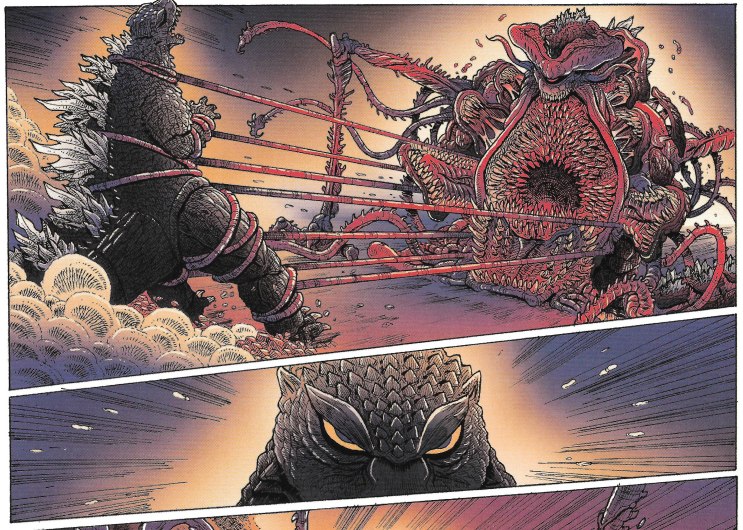 Only for him to charge, because HEY, that's what he does! 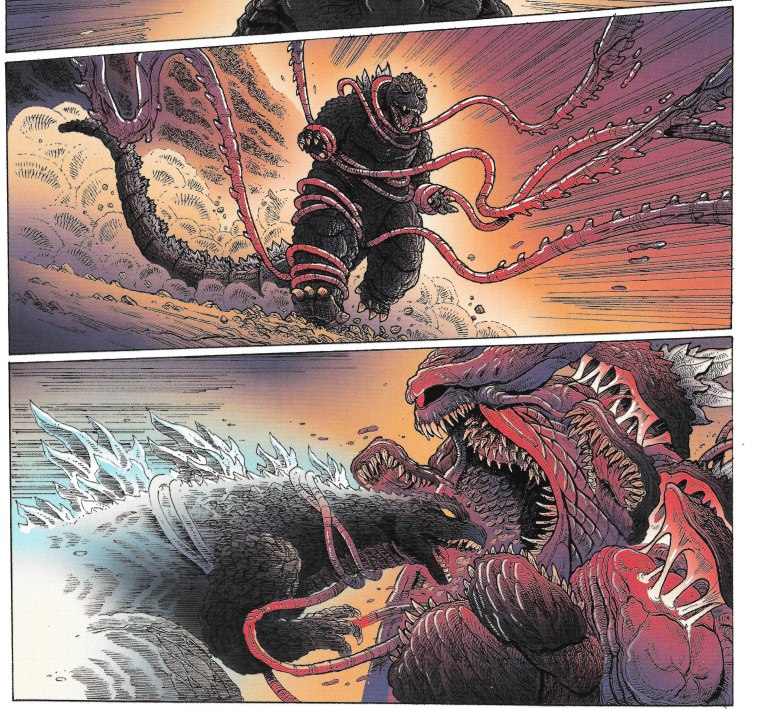 …and wisely uses his atomic breath to blow Shezilla all to Hell. Literally as well as figuratively. 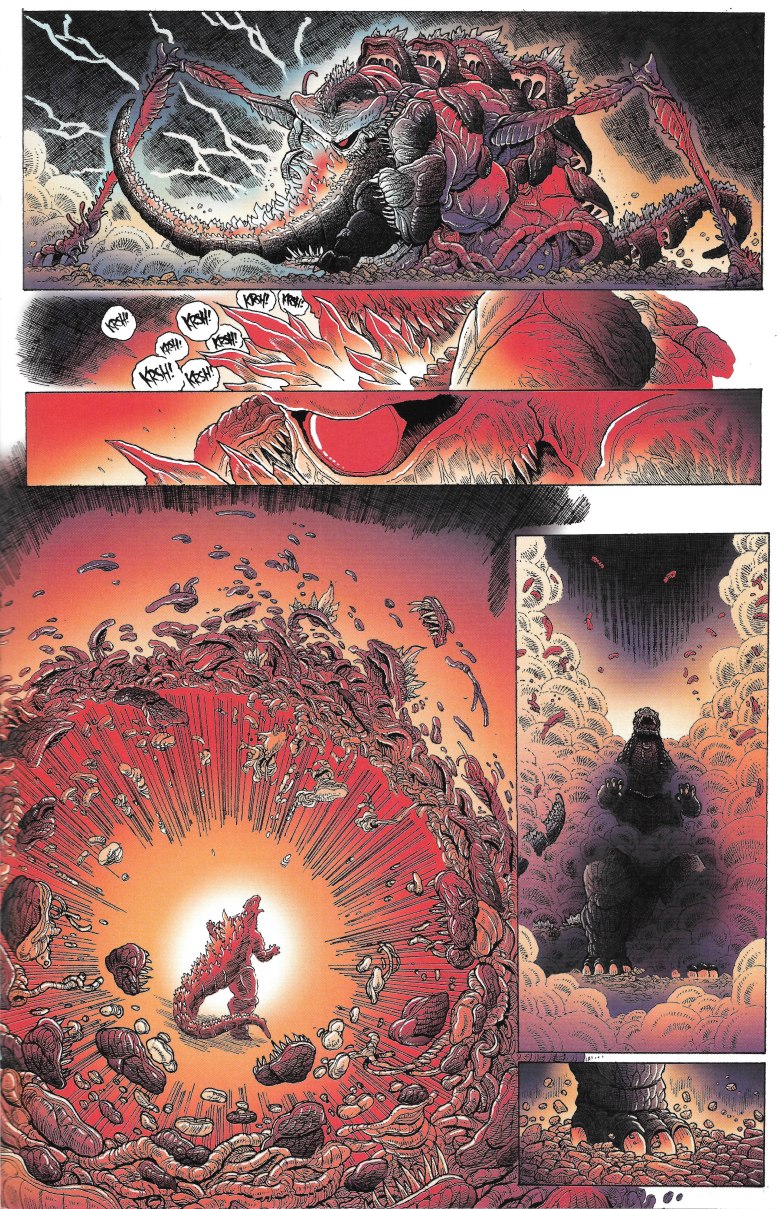 And then the ground gives way and he falls down a well that looks exactly like the one in the opening, symbolizing to me that he gets to start over at the beginning of this mess OR he's going to a deeper level of Hell for another of the seven deadly sins, like the sin of envy or pride or gluttony, which he will defeat by fighting giant monsters.

My final assessment of all this? I hate to fall back on something as trite as "make up your own mind" but this is one you will need to seriously make up your own mind about. The book is beautifully rendered and the color palette selected, art stylings and finishing are all top notch. It looks good.

But the story is sterile and the wordless format, while daring, doesn't really sell a plot that consists of anything other than Godzilla wanders around and attacks things that attack him (and some that don't). Even taking metaphors to their extreme doesn't yield a satisfying tale, it's just a bunch of Kajiu shots.

I love Godzilla, but maybe this high concept took things a bit too far. Which is saying a lot for a story that takes place in the depths of Hell.

Posted by SonOfCthulhu at 7:02 PM