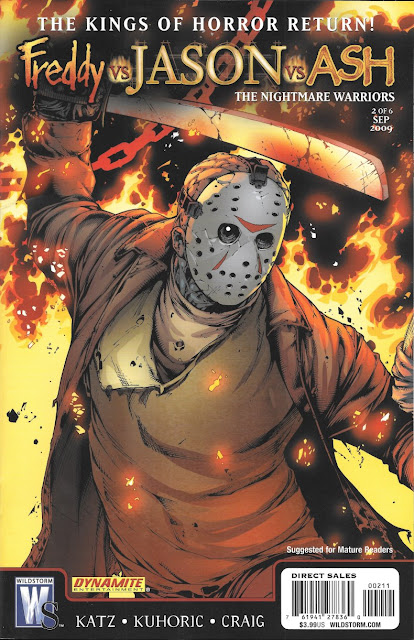 Wildstorm and Dynamite Entertainment pulled off a modest miracle for horror fans back in November 2007. The book brought together three iconic horror movie character for one epic six issue throwdown. It was extremely popular.

The horror icons are: Freddy Kruger, the dream essence of a burned up child murderer who kills people with his glove full of finger-knives; Jason Voorhees, the undead hockey-mask wearing drowning victim who hacks people to death with a machete; and Ash Williams, the lovable idiot-hero of the Evil Dead movies who dismembers the undead with a wrist-mounted chainsaw.

I can tell already this review is going to end up pretty messy.

But what the hey! We've made it this far and are still kicking around. Might as well go for broke.

Both series were penned by James Kuhoric and Jeff Katz, who do a good job of keeping these three true to their origins yet also workable in a blended reality fashion. Both also featured Jason Craig on pencils who likewise made a good impression with these. Not much else to his credit, which is kind of a shame.

To catch you up on things, since this is the second series of these three celebrities existing in the same universe, as of the closing page last mini Ash used the Necronomicon (my favorite of all 'nomicons, by the way) to banish Freddy to the Deadite world. Afterward Jason and the book were frozen underneath Crystal Lake.

Since then a whole whopping one issue has seen some changes here as the Government of the United States in the personage of one Director Gordon Russell has seen fit to retrieve the evil book and the killer from the frozen lake. While Director Russell makes off with the tome, the agents sent to retrieve Jason instead wake him and are killed. Freddy uses his dream power to contact Jason and, assuming a likeness of Jason's mother, convinces the undead psychopath to go after Ash Williams.

Ash meanwhile has found happiness with Caroline, believing all the undead fighting is behind him. He is visited by a reminder of the past in the form of Doctor Maggie Burroughs, who is gathering survivors of the two murderers for some mysterious purpose. Audience members who know her connection to all this can sit down. I never made it that far in those particular movies. Anyway, Ash declines and heads to the store, leaving Caroline alone.

As he returns to find Jason has severed Caroline's head, he is confronted by Caroline's Father. He blames Ash for his daughter's death. He flees just before police arrive, his narrow escape observed by a mysterious figure in a green hummer. 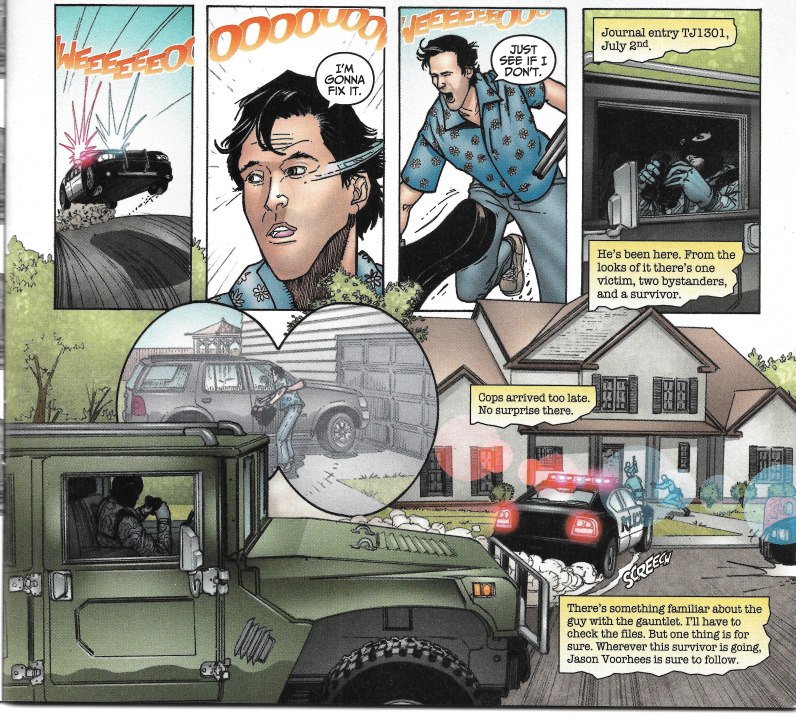 At a secure government facility, Director Russell is using a translation program and a red glowing robot laser to read the Necronomicon. Wonder what that's all about. 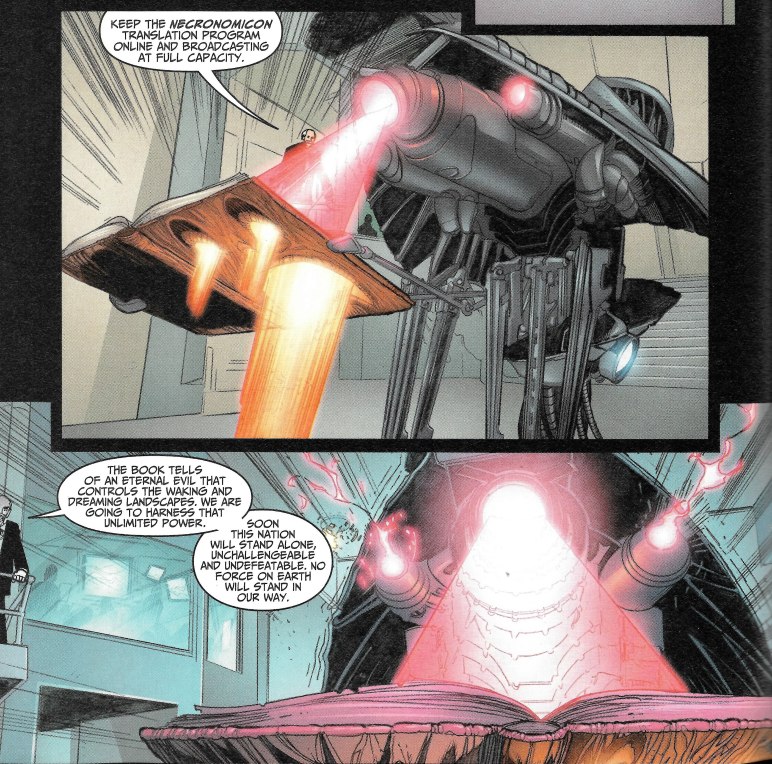 Ahh, so it's gonna be one of those…The government is amoral and will use any means necessary to defeat its enemies. Great. How many zombies are they going to conjure up? 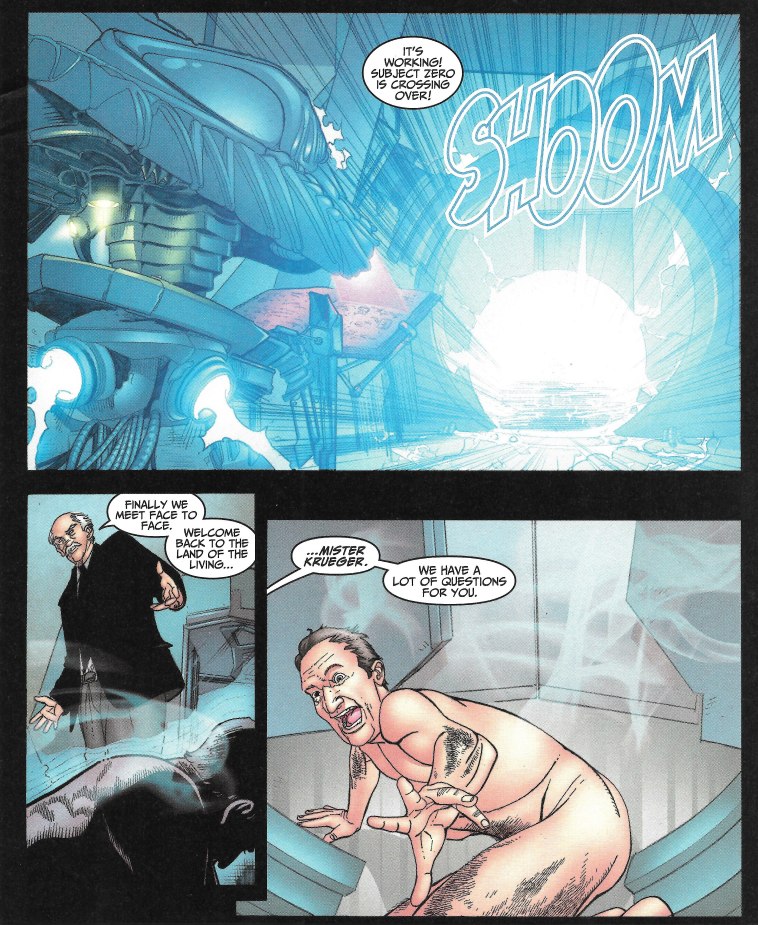 THAT is a decidedly smooth and alive version of Freddy Krueger you have there. I have a lot of questions about how you do that.

Maggie, our mysterious doctor with a similarly mysterious reason for gathering up survivors of prior horror movies, er… killer's attacks. Wakes up from a dream at that moment with something that seems revealing. 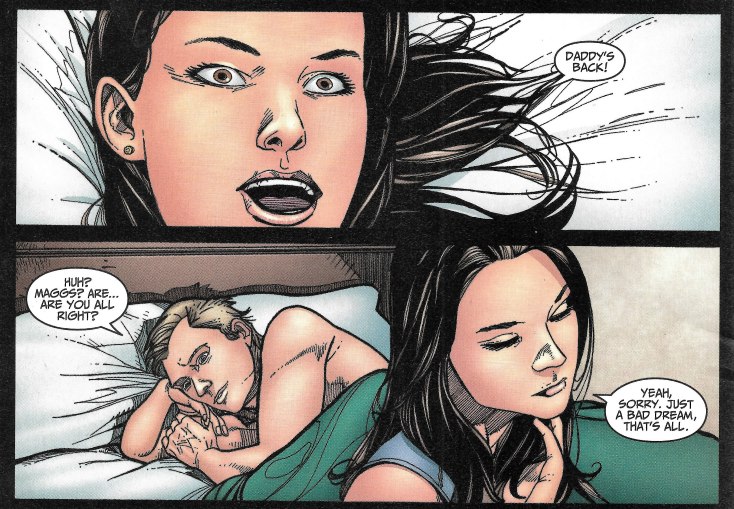 Huh? We'll leave that for a future issue to explain, because at that moment several cameos by actresses from the sequels of the Freddy and Jason franchises come in.

I'm going to admit to two things here: 1.) I'm not a big enough horror nerd to know any of these people by name. I'm sorry. That may make me a huge wussy, but the honest answer is that I thought most of them would get killed off in the opening moments of the next sequel anyway. I just never paid that close attention.

Also 2.) Once I realized this was where the story was going, I had to go look all these people up. Because I figured that was why they were included. A little bit of horror movie fan service that I felt the need to validate. Because I'm sure it took some work to get all this right.

Meanwhile Ash boards a train to crash Maggie's little soiree in hopes of getting some answers on where to find Jason. Which would be right outside the train window, if he looked up. 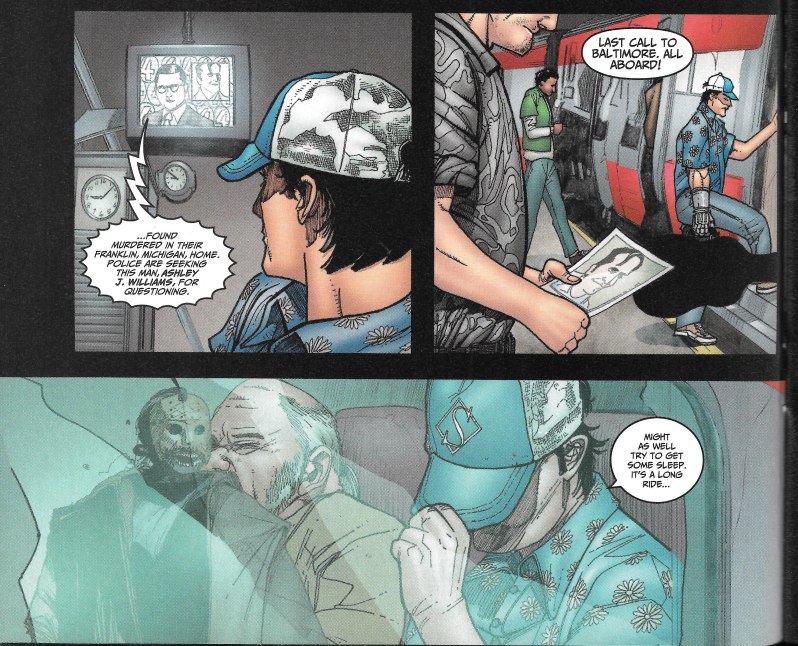 Jason decides to follow Ash and jumps on with some hobos on a commercial train. And I have just gotten hypertension, because there is no way he could have known these two trains would end up in the same city. Just like NONE. But he kills a couple of people and I'm all in favor of that since we are now up to page 10. 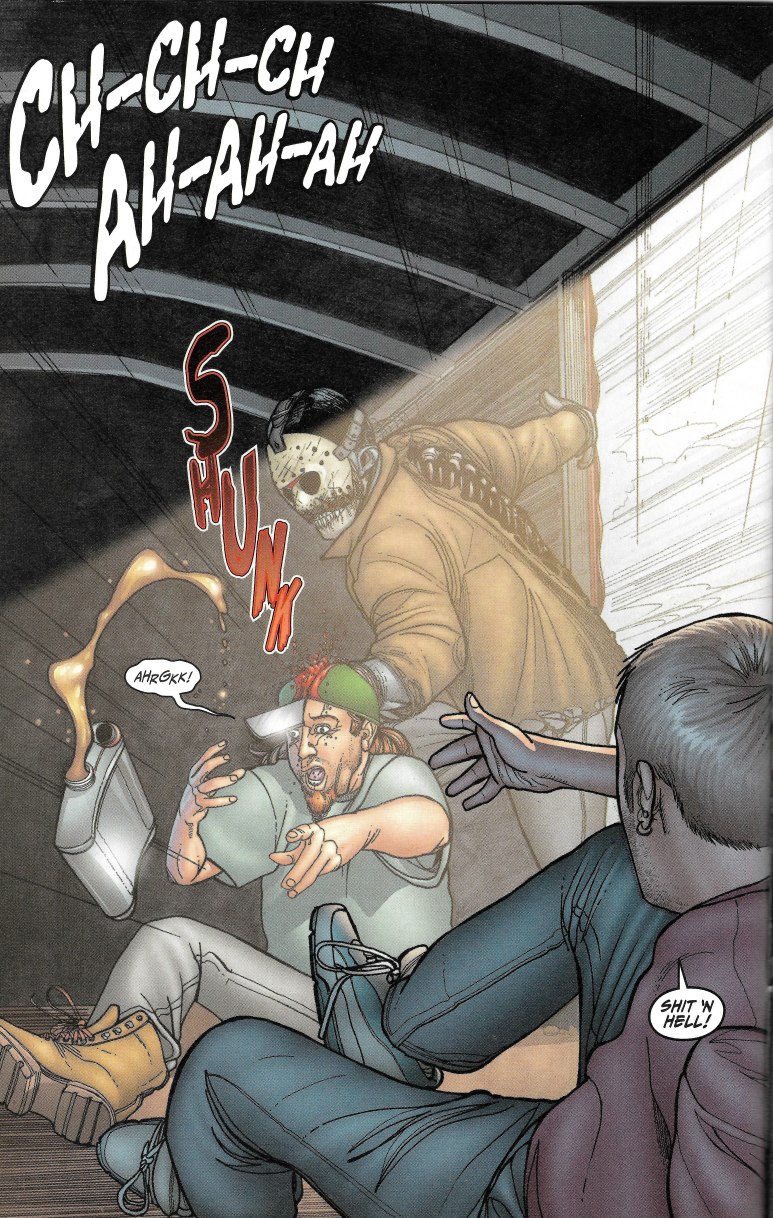 First the old "machete through the skull…" 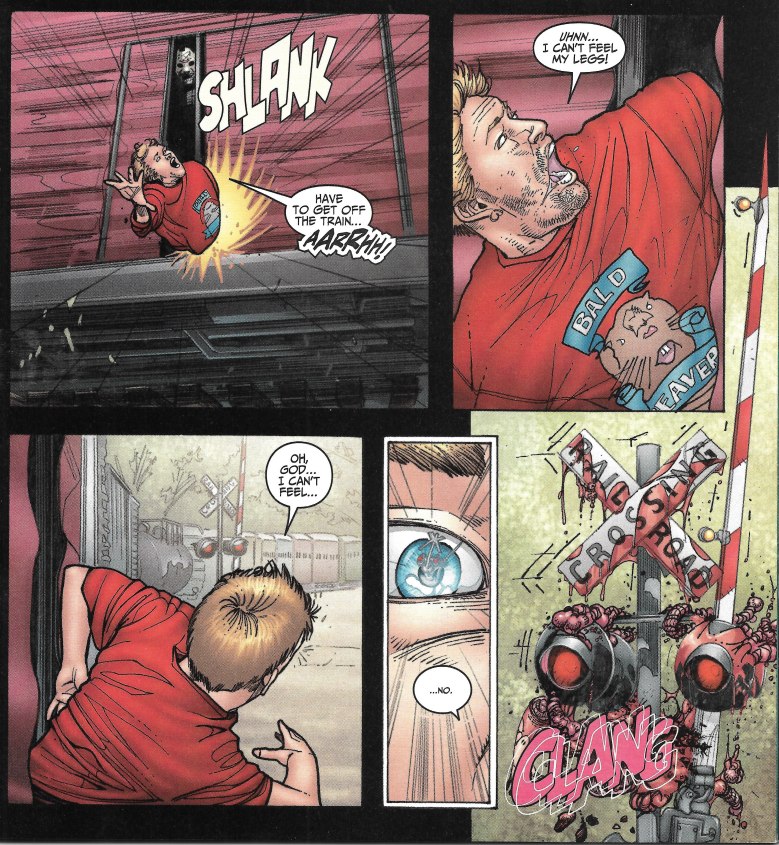 Followed by the old "shoved out a train car door so your head and shoulders end up taken off by a railway warning sign".

*Ahhh* Looks like the story is finally getting on the right track here.

This Father and Daughter pull up to Doc Maggies and it is none other than Stephanie Kimble from Jason Goes to Hell: the Final Friday and her Dad Stephen (which is a departure from the Steven spelling in the movie version). Stephanie is actually Jason's cousin, which means she gets "Jason-sense" in that she can feel when he is about to murder someone. 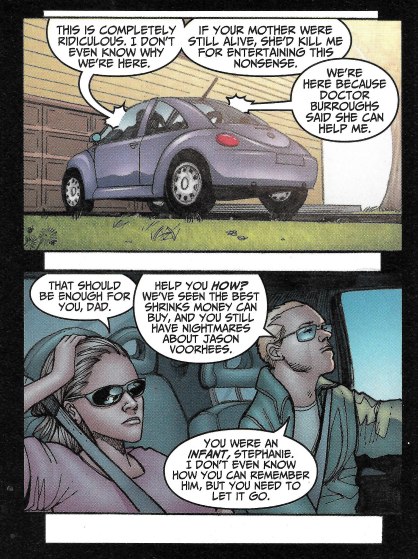 That means when she goes inside the house and has an episode we know that Jason is stalking these thugs who are forcing this poor girl to perform oral favors on them. 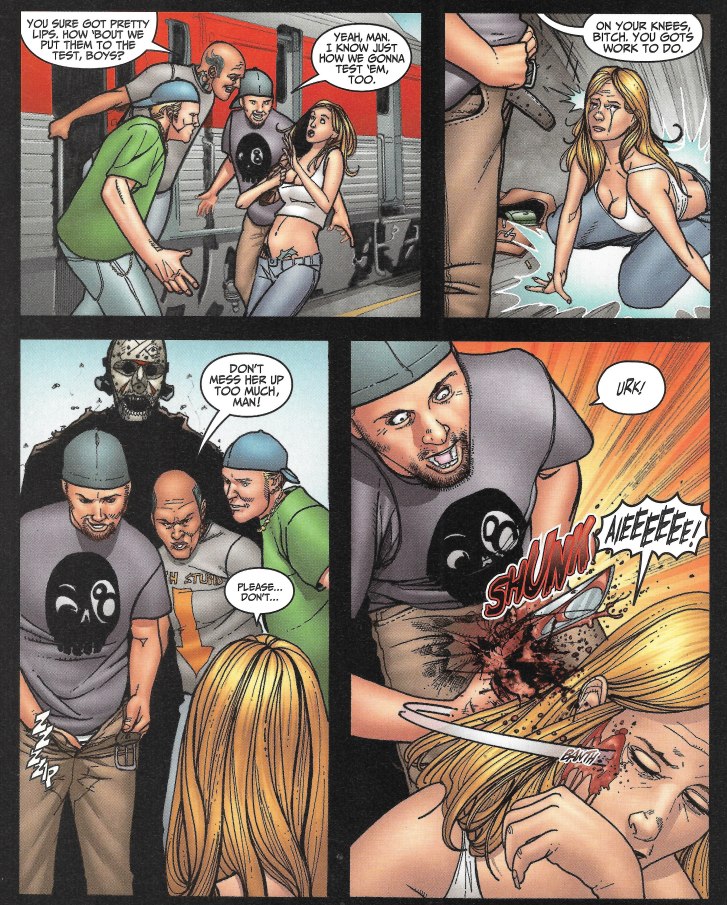 Except that dude. He's not going to have anything to orally favor ever again. I think his friend sees what I mean. 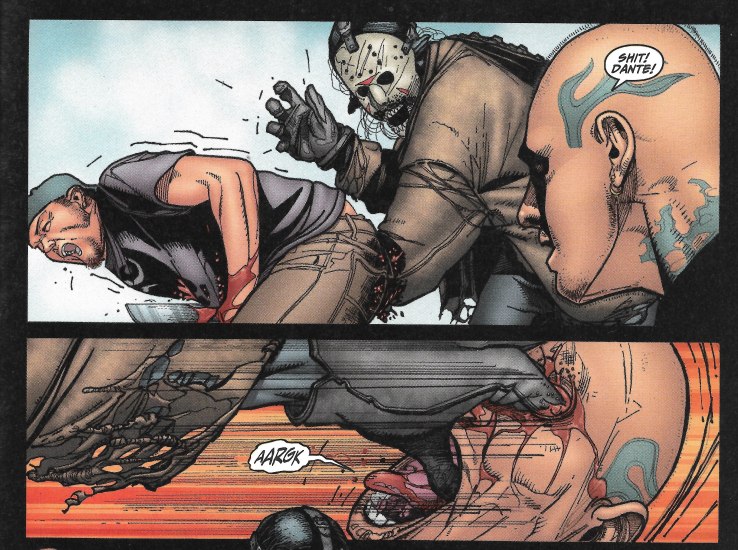 Jason uses the guy's head as a bowling ball to take out the third rapist and who wouldn't really. I bet it goes real fast with those flames painted on the side of it. While the guy tries to stand, Jason steps on his skull and crushes his cranium.

I'd love to say this works out well for the young lady, who was just minding her business when the jerkwards tried to sexually assault her, but this IS a horror movie franchise tie-in comic book and.. 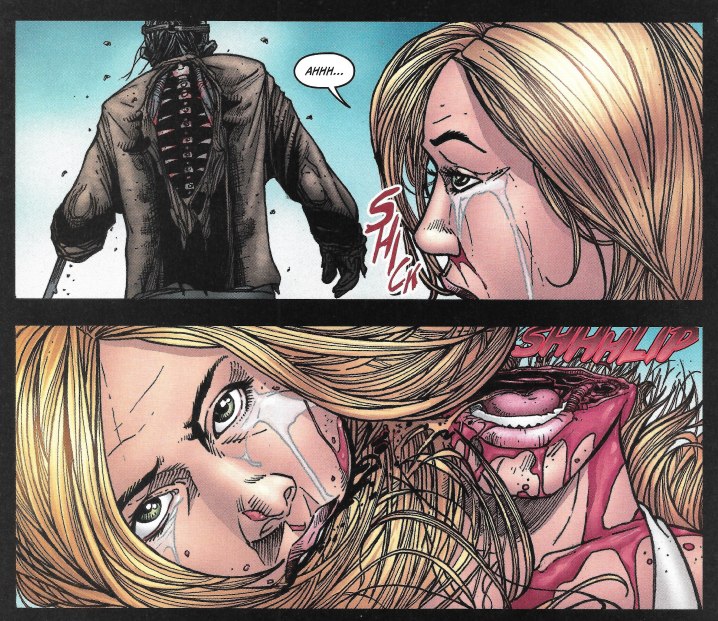 Sorry sister. Them's the way the cookies crumble. This issue is a little Jason heavy, which is fine as I can only assume the other five give equal weight to the others. 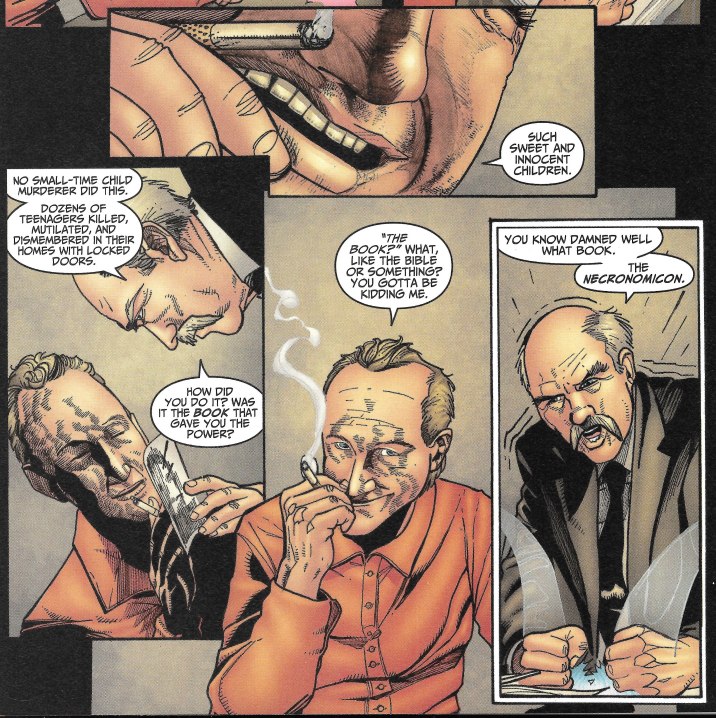 Sensing I was just about to say that, the book shifts over to Freddy, in orange prison fatigues and asking for a cigarette and a light. He has a thing about fire you know. The government leans on him a bit for his secrets. He appears to be toying with them. 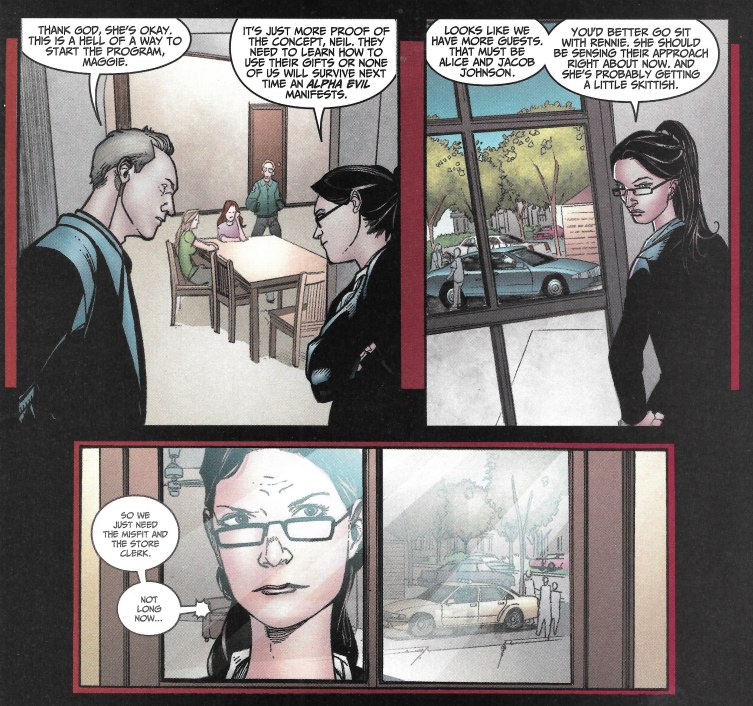 The store clerk we know to be Ash, so who is the misfit? Have to find out as we go since… 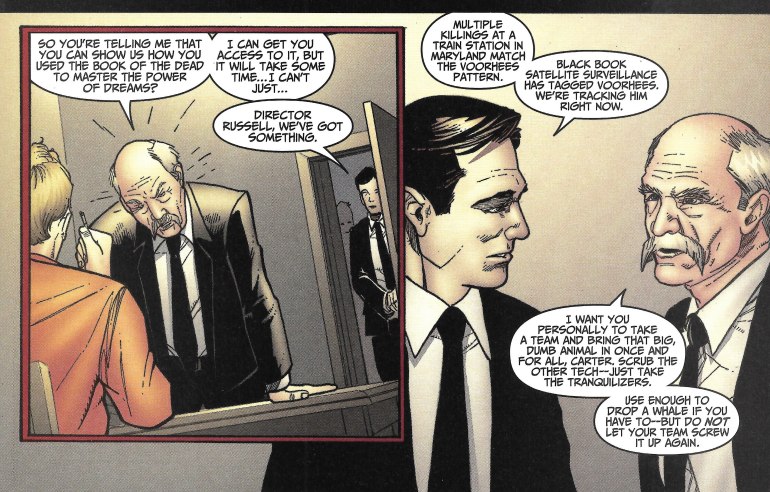 Yup, the agency wants Jason. And we know where Jason is. He's following Ash. Following him straight to the door of… 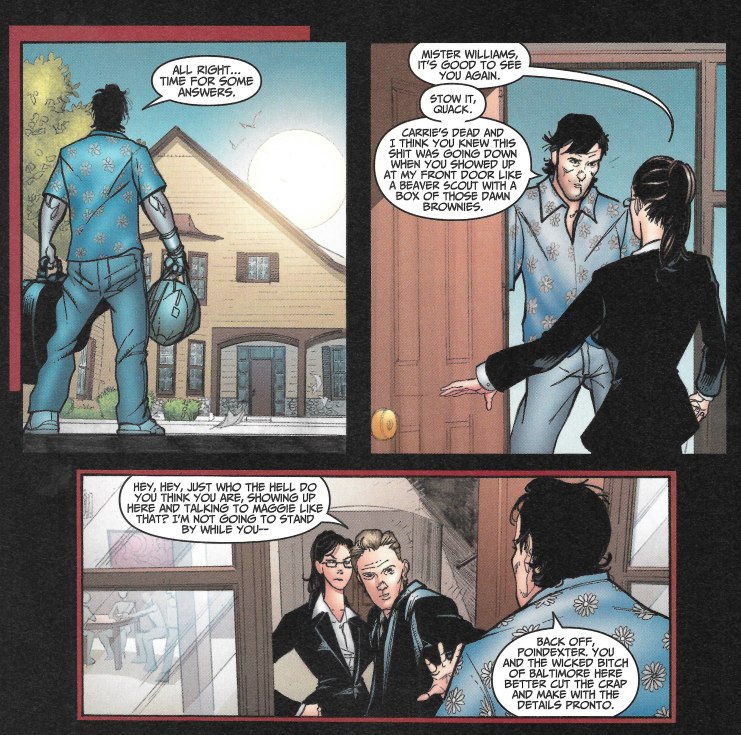 I'm a HUUUUUGE Bruce Campbell fan and you can just here is voice all over that. But of course if Ash is here then Jason can't be far behind. 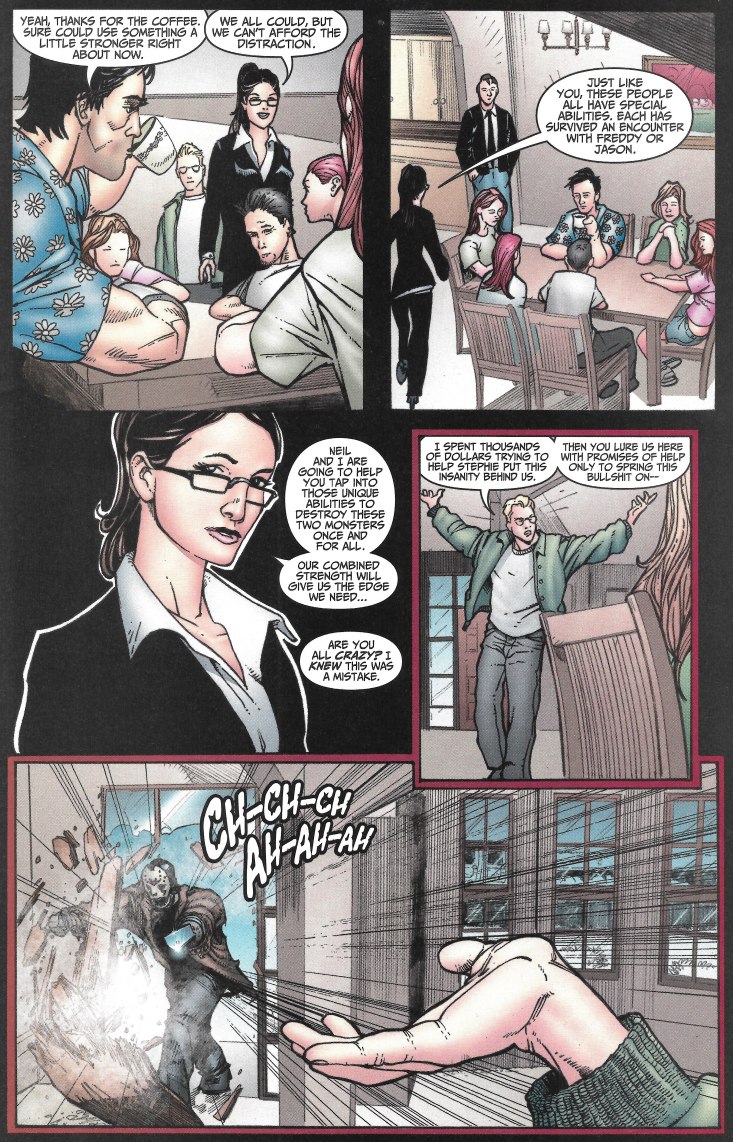 Oh! Here we go! Steven or Stephen or whatever your name is…get out of the way honey… 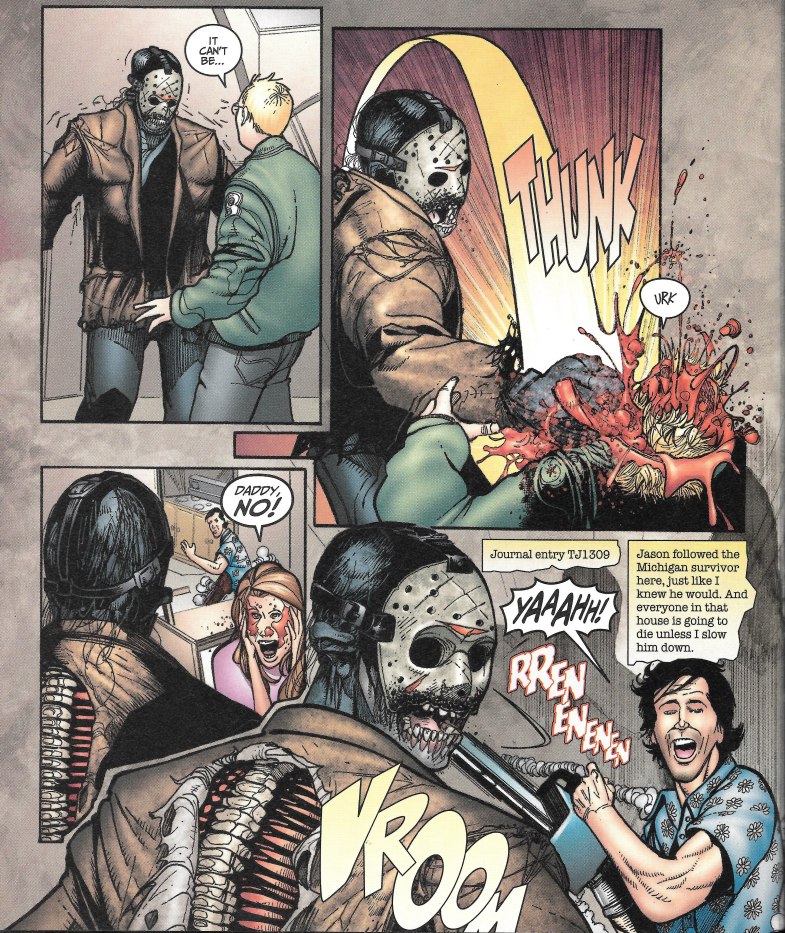 Ohhh…Dang! Too late. Get out your score cards, kiddies. Ash is going for his chainsaw and we all know what that means… 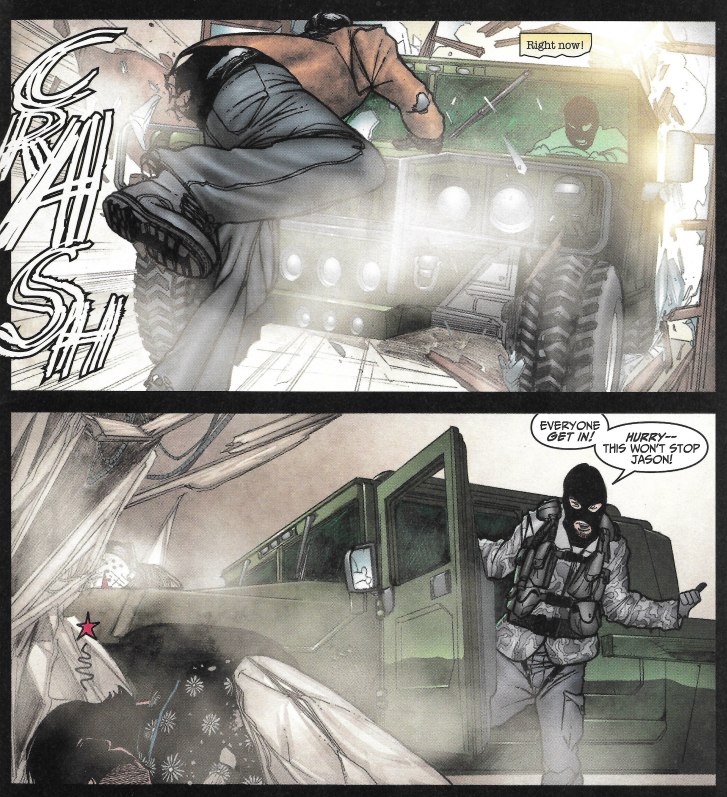 Jason is gonna get plowed over by a Hummer? No, that can't be right. Who is driving this thing? 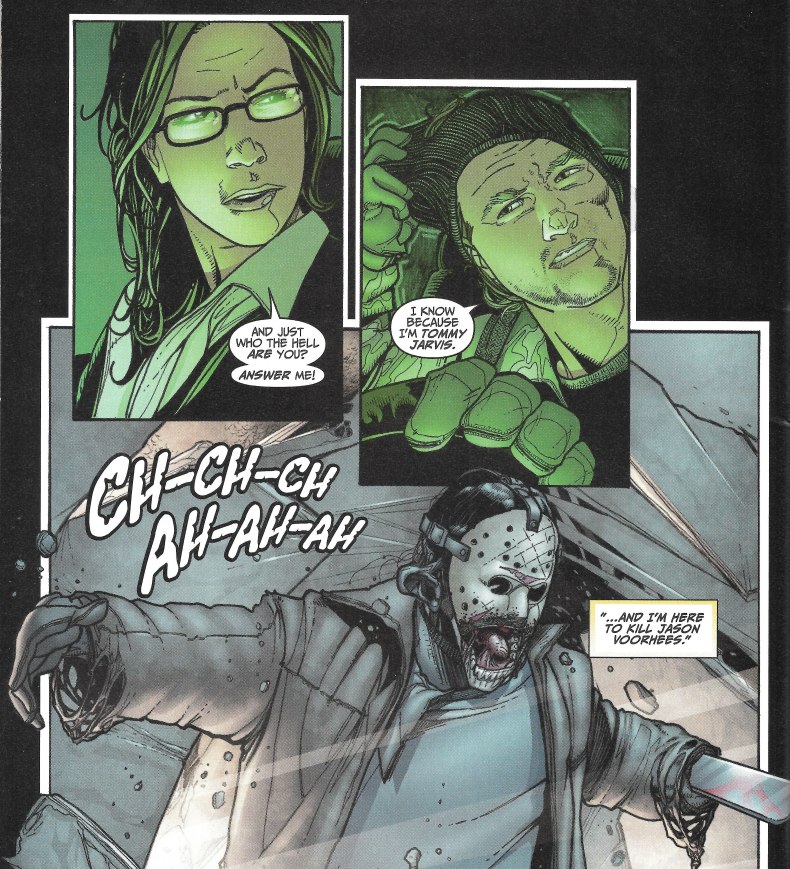 I have to cop to owning all of these in trade form. They are great if you enjoy even one of the movie franchise (and I like all three, but have a particular affinity for Evil Dead). At a discount bin price, they make total sense. Even at regular price they are a ton of fun. So pull your chair up to the fire and hunker down with the trade. You'll be glad you did.

Posted by SonOfCthulhu at 2:08 AM