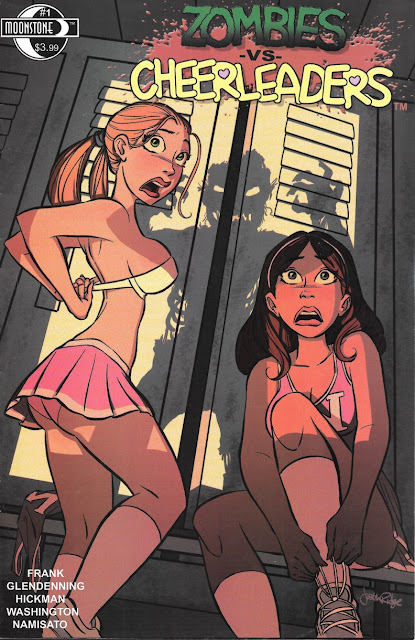 Gimme an "H" for Humor

I'm good with a bit of camp mixed in with my horror. Some of the best horror movies have that odd moment of humor mixed in with the pathos. There are many that are outright comedies with horror elements that work just fine in either context.

With a title like Zombies vs Cheerleaders, I wasn't expecting a serious take on a zombie epidemic. I also wasn't expecting it to be a rotating artist anthology series. Thankfully I was pleasantly surprised with the goofy art, humor and timing. The stories come to us from the warped mind of Steven L. Frank. The artistic chores this time around fall on Ben Glendenning(of SuperWorld/Tin Star Tex/Skulljammer, very clean cartoony lines, http://skulljammer.com/), Jessica Hickman (of "too many titles but many Star Wars thingies and also a blog you should totally follow: http://jesshickman.blogspot.com/ ) and Frankie B. Washington (of many small press stuffs and http://www.frankiebwashington.com/).

I have to say that going in with three different artists with distinctive styles all telling stories hung around a common framework involving a campy element combining humor and horror sounds like someone is trying to make a fifteen foot high house of cards.
And yet…somehow…it works.

The art tone shifts at each chapter break (although each is uncredited so it is difficult to know for sure who is doing what) and it doesn't distract you from the flow of the story, odd as that may sound. The consistent use of humor works in context, yet still there are moments where we feel some connection with the characters, as strange as that might sound. And the whole mess is just damned entertaining.

Here we go: Buddy Fox is caught by Professor Mullins in the school lab after hours on the night of the big football game. When Mullins questions Buddy, he gets a rather odd response as to what the young man is doing there. 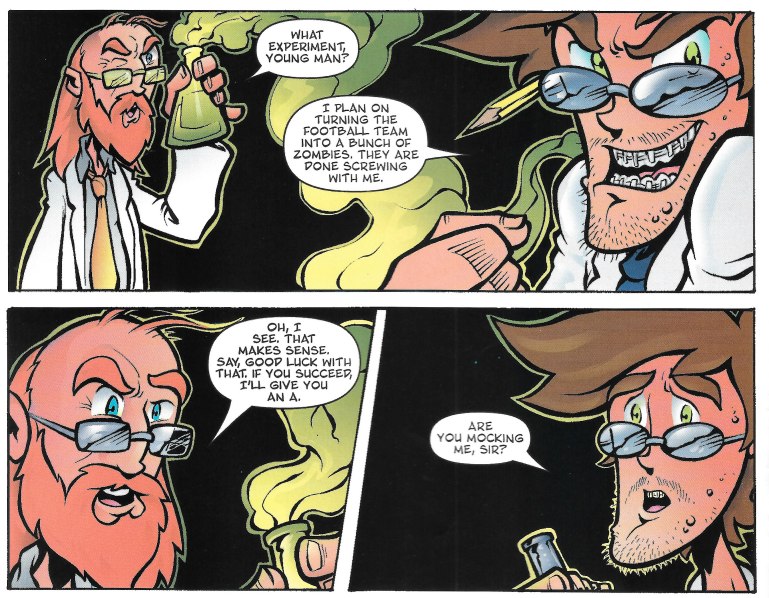 And Mullins goes on to insult Buddy a bit more, prompting the lad to decide his formula needs testing and Mullins is the perfect candidate. 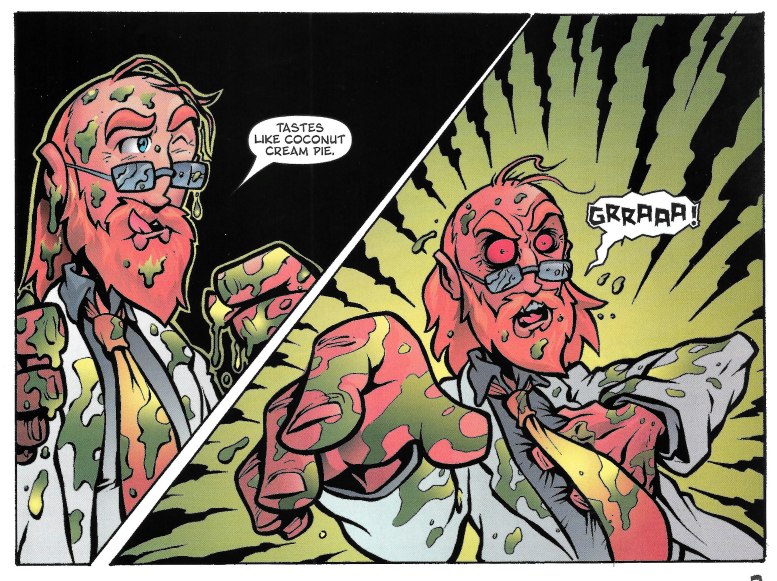 This is Ben Glendenning, if I don't miss my guess. His expressive caricature style with its cartoonish overtones seems evident when compared with the stuff off his website. A little artist credit box would go a long way here though.

Anyway, so the Professor is patient zero and Buddy is probably wishing he'd thought this out better. 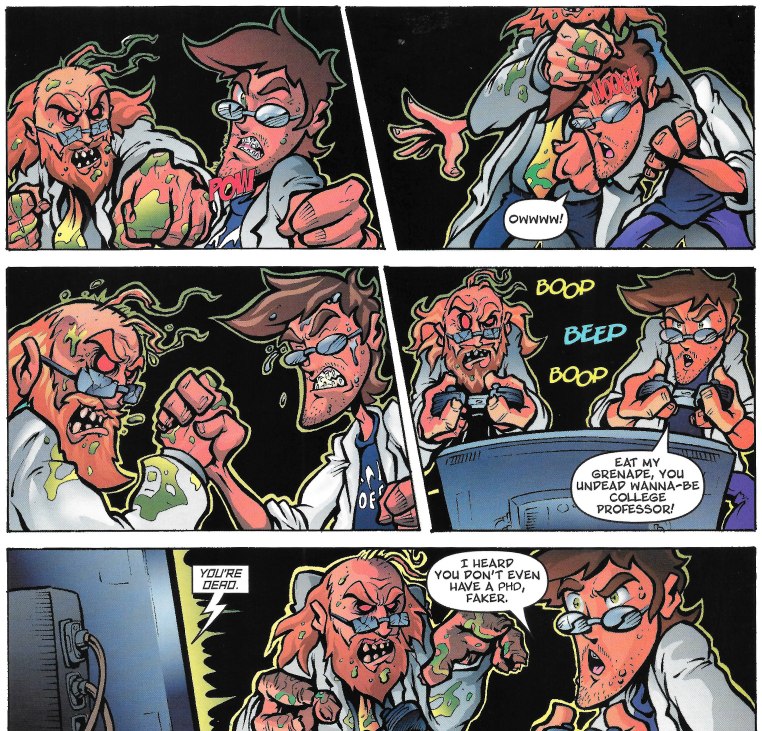 And here is where we see the humor fall into place. It is screwball comedy style and it works in context of the setups on these pages. I mean you kind of get a feel for the whole thing on the next page. 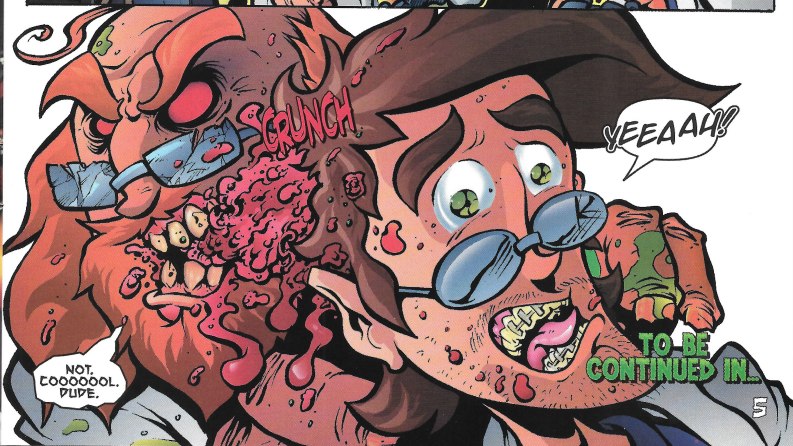 The rub of it is this: cheerleaders fighting zombies for 22 pages is a ludicrous concept to begin with. Making it a roaring series of jokes is the only sensible thing to do. Like, what is the biggest complaint about Mega-Shark vs. Giant Octopus? Not enough stupid scenes of the two actually fighting or attacking people. The last thing people want from a book with this title is thinking about something. They want mindless entertainment and the more mindless the better.

Especially if that mindlessness can occasionally lip into being clever. Which the book does here and elsewhere.

Yet it can still dish out the gore when it needs to.

So we have a very delicate balance here and as you can tell by the call sign at the bottom, the tag-team is about to call in a different artist to continue our tale.

Next up is Jessica Hickman, I think. Ya know, it really is hard to do this without a scorecard. She does this bit with our first two cheerleaders who happen to hear Buddy screaming. 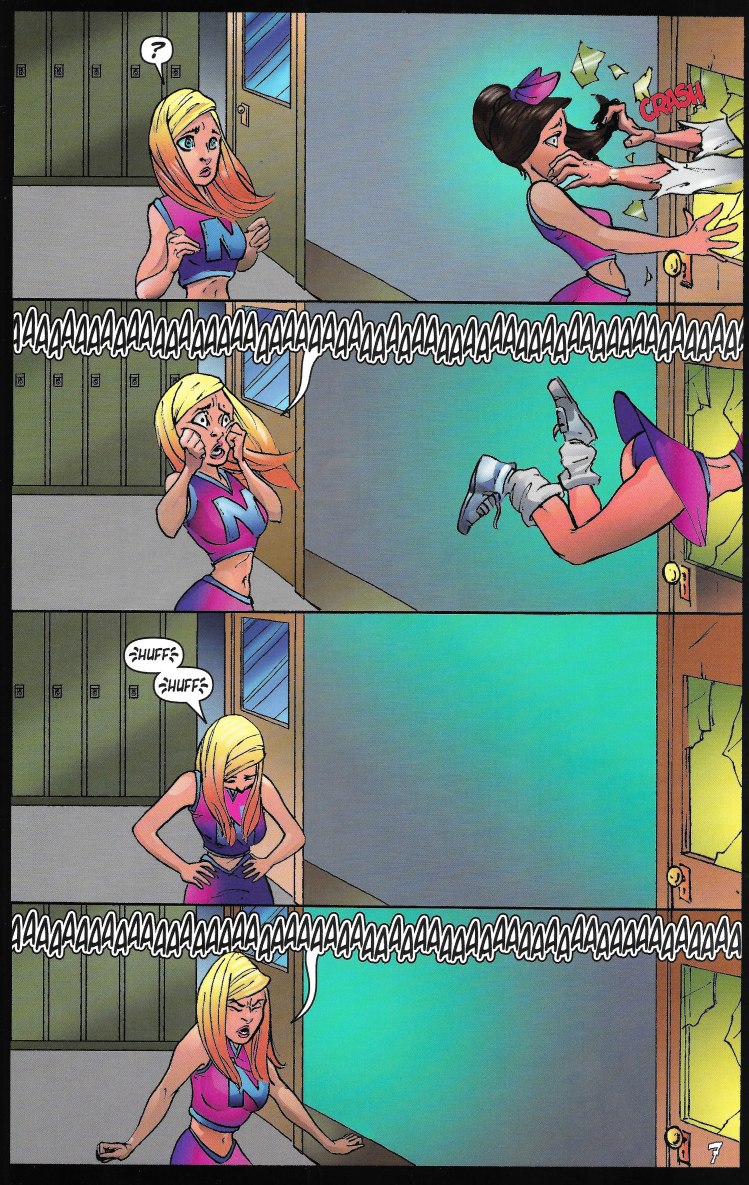 Cute bit. Next bit is even better. First, the janitor hears blondie and asks her why she's screaming. Her answer is a bit off target… 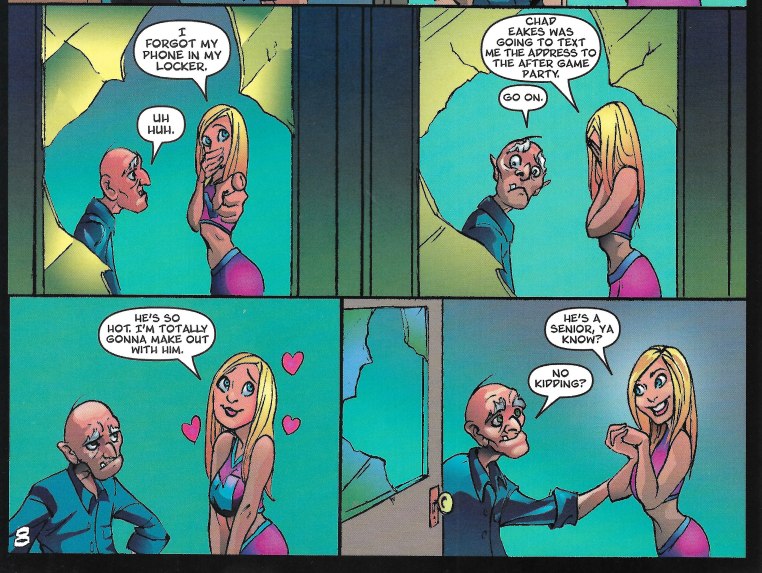 Which leads him to just push her into the room with the zombie. That bit at the end made me smile. A lot about this book makes me smile. Like this bit where the janitor tries to explain that there is a zombie murdering students to the philandering principal. 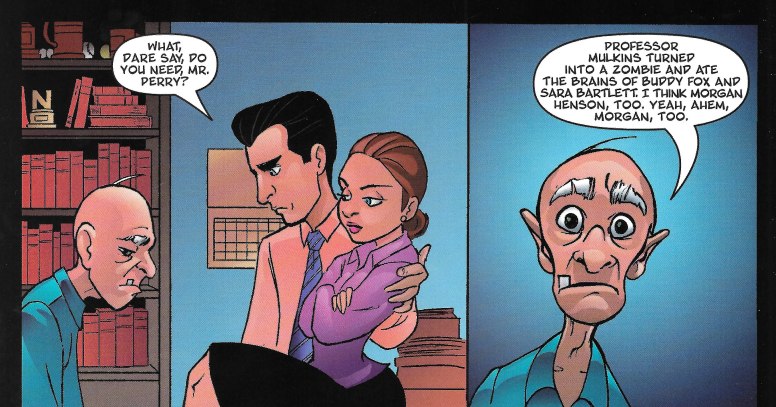 And this part where the principal tells him to get lost. 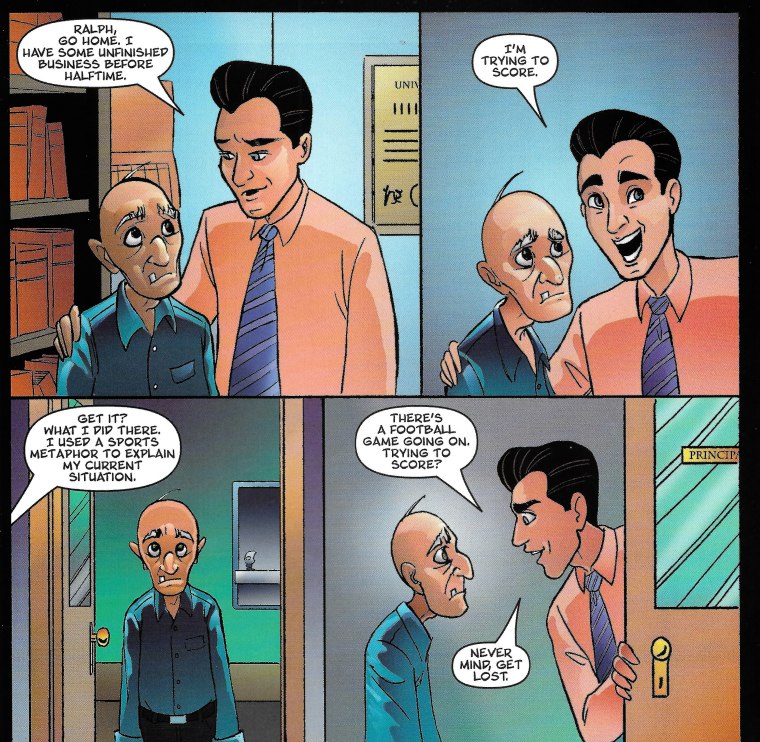 The plot lacks a central protagonist, which in most cases would hamper one's enjoyment of the story. However when viewed from this distance, it's kind of okay. You just sit back and enjoy the joke, one liners and occasional gore. Speaking of which, as the principal is called to the football field, we pass the baton to Frankie B. Washington (I think) 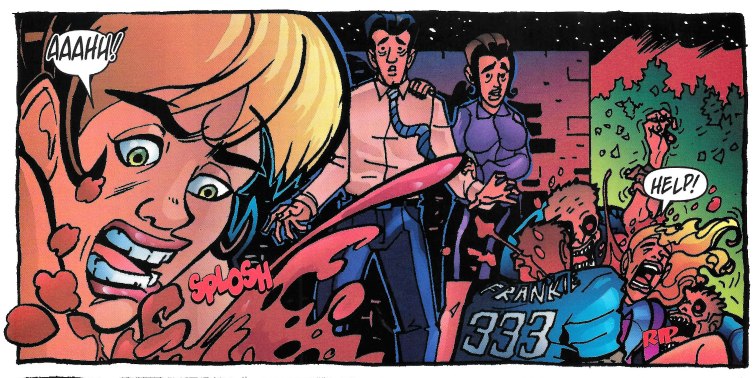 We begin this piece with the principal trying to rescue people from the football field, although to be honest he's really out mostly for himself. Frank still knows how to bring the humor into this, like with this bit. 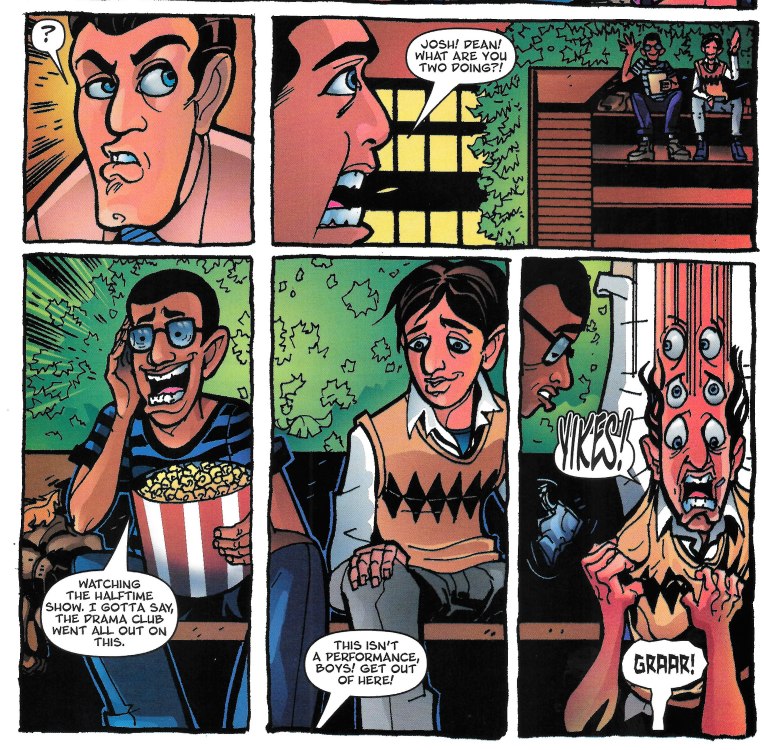 It is all throw away characters and silly gags, but it WORKS. I laughed quite a lot at all this. 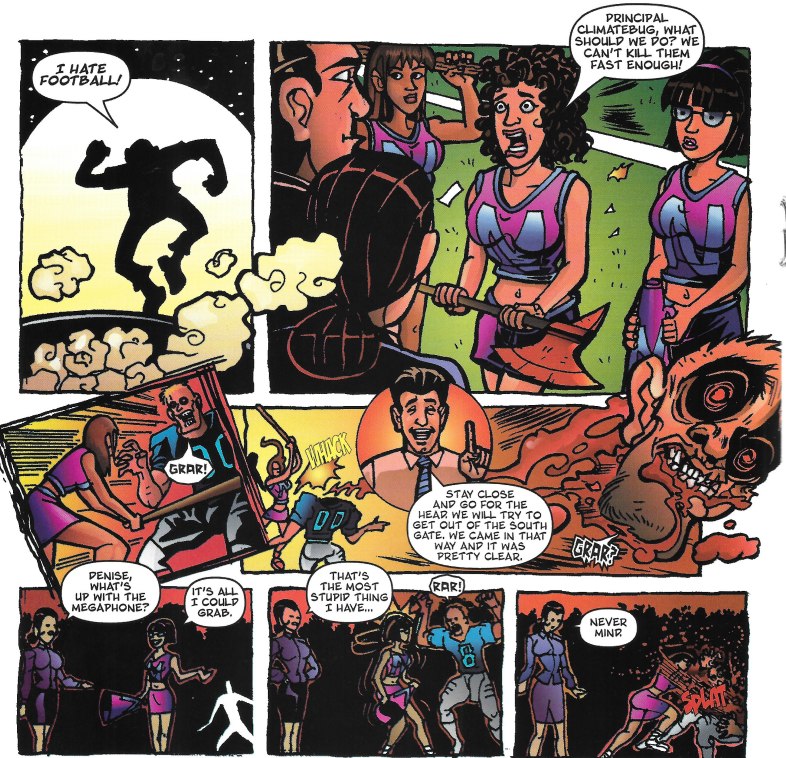 That joke with the megaphone slayed me. 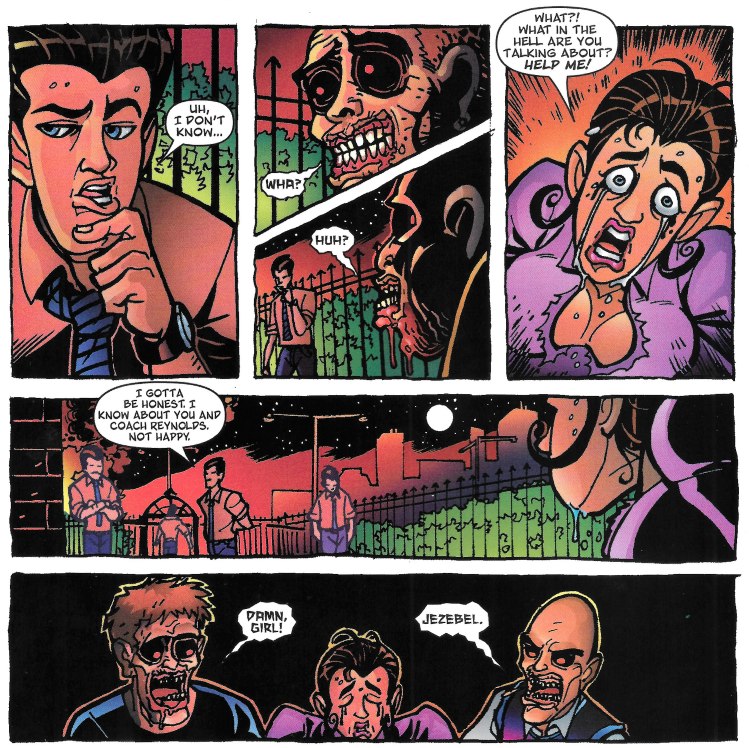 Even when the principal's love interest gets snatched by some zombie, it is played off as a something silly. 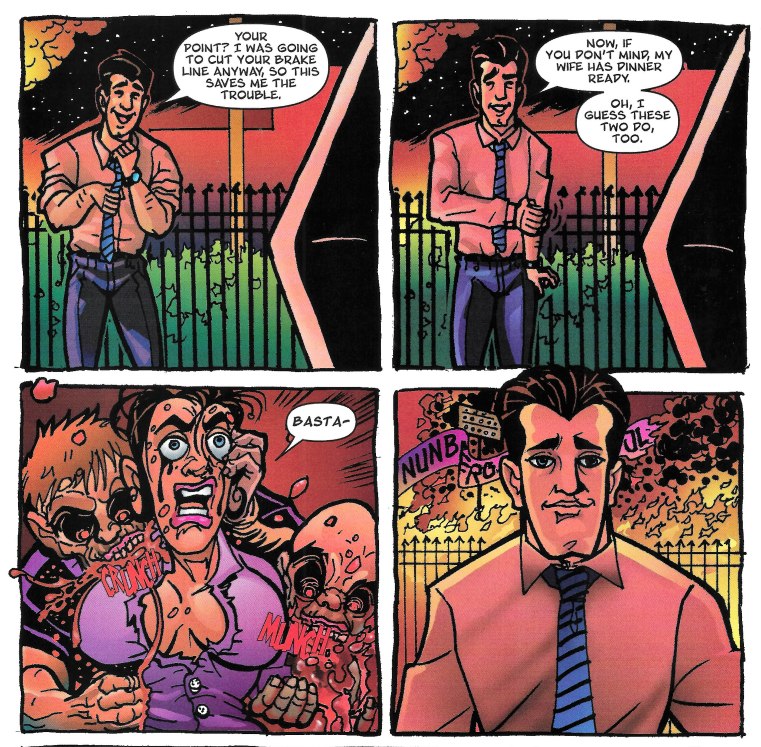 And given the ending, it could have been shown as having quite an emotional impact, yet I found myself just shuffling on to the next gag.

There's a final baton pass back to Jessica Hickman that is a standalone tale of three cheerleaders who fight with (and one ends up on a date after) the school's quarterback who is now a zombie. I'm going to preserve its content for those who want to seek these out.

It really is a fun little mag. I hope the concept doesn't run too stale for Frank and he can keep up the joke quality. As it is, you are looking at a pretty solid book that, if you like what you see here, you should definitely check out.
Posted by SonOfCthulhu at 2:21 AM