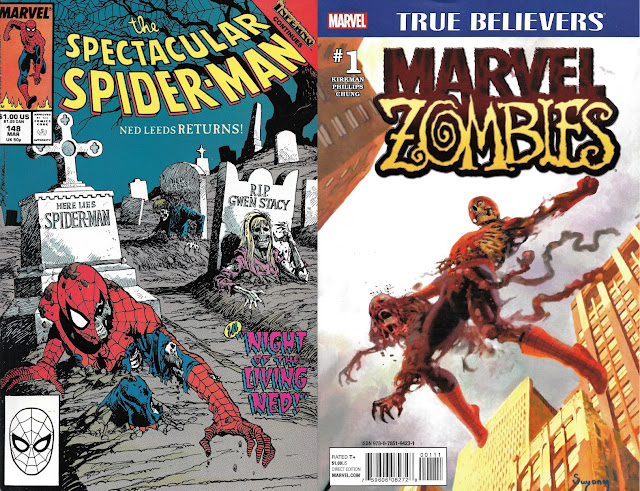 Marvel Zombies THEN and NOW

The term Marvel Zombie has been around for about as long as I can remember. Back when I was growing up a "Marvel Zombie" was someone who collected only Marvel books and talked crap about DC Comics. It was a silly type of branding that marked you as a fanboy who believed Stan Lee's hype about one company's product being of remarkably higher quality than the other company's books.

I thought of myself as one for many years. DC comics were way more kid friendly and at the time I found myself drawn toward Marvel's gritty tone and realistic universe building. The stories were a bit more interwoven and the timelines of things always at the forefront.

However, even in 1989 we had zombies in the Marvel universe. Well, "sort of" had zombies, anyway. 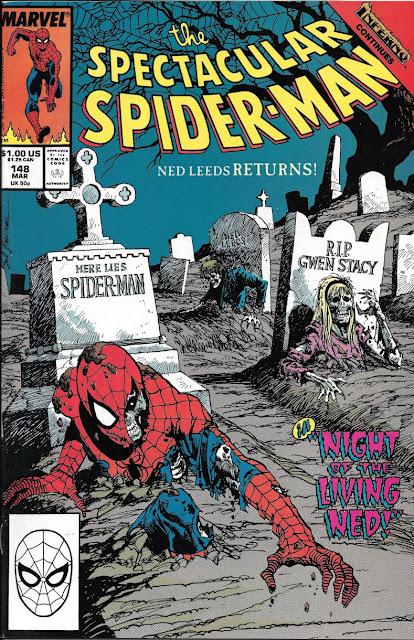 There was this crossover thing in 1989 called Inferno that spun mainly out of the mutant X-Men books. The short version of the story is this: Demons attack New York!

The long version is Cyclop's wife, who is Jean Grey's clone, tries to sacrifice their newborn son, who will grow up to be Cable and come back in time to fight alongside the X-Men, to a demon in the Limbo dimension where Magic's sword takes her when she teleports and a second demon decides that the perfect time to fight the first demon causing a war just as a portal to the Limbo dimension opens releasing hordes of demons on to New York and transforming the city into a weird extension of Limbo itself. And it crosses over to every X-Men and New York based superhero's comic books!

Many were particularly silly. I mean Daredevil fought the ACTUAL devil in his tie-in.

This one however is the opposite of that, focusing on two long time Spider-Man co-stars: Flash Thomson and Betty Brant. We've got seasoned veterans on all fronts here: Gerry Conway on scripting chores and Sal Buscema on pencils and inks. I say we get right into it. 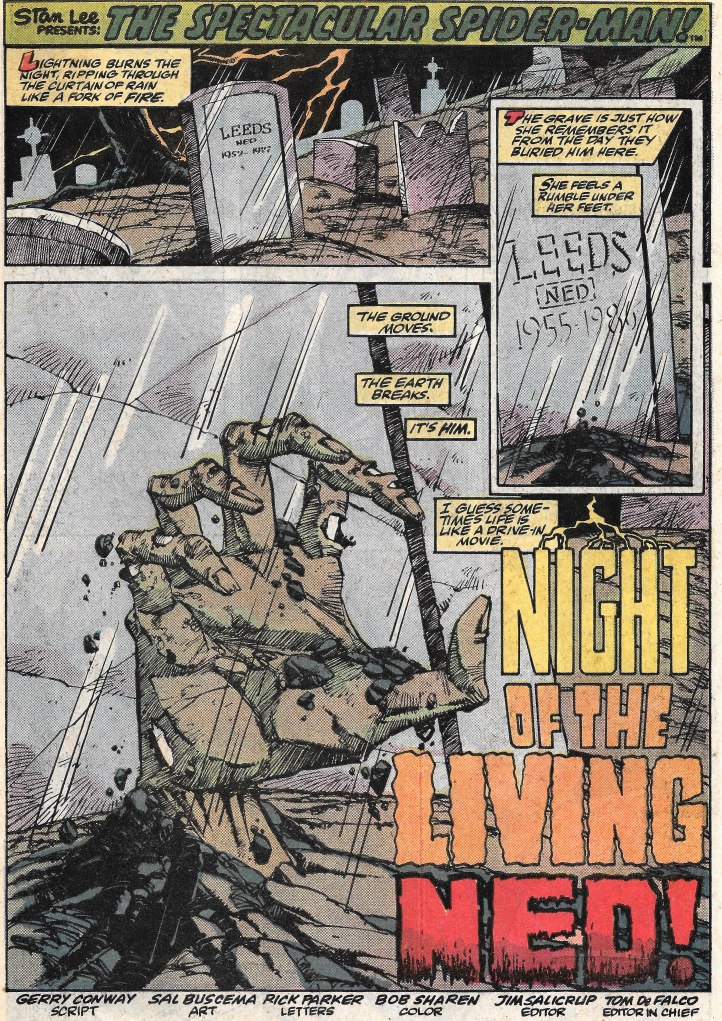 The issue begins with Betty's late husband Ned Leeds rising from the grave as a zombie!

As well as Gwen Stacy! 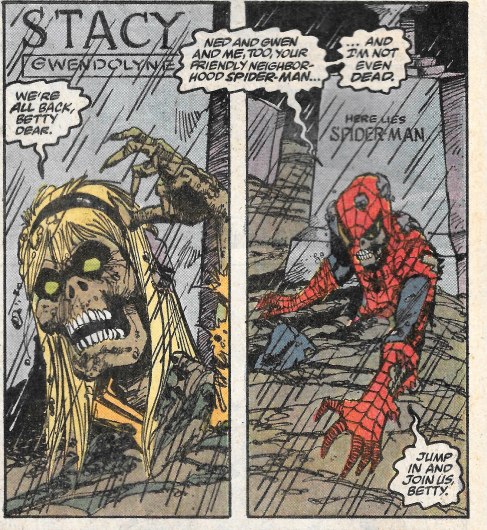 And Spider-Man, who isn't even DEAD YET! Is this very bad news or a very bad dream? 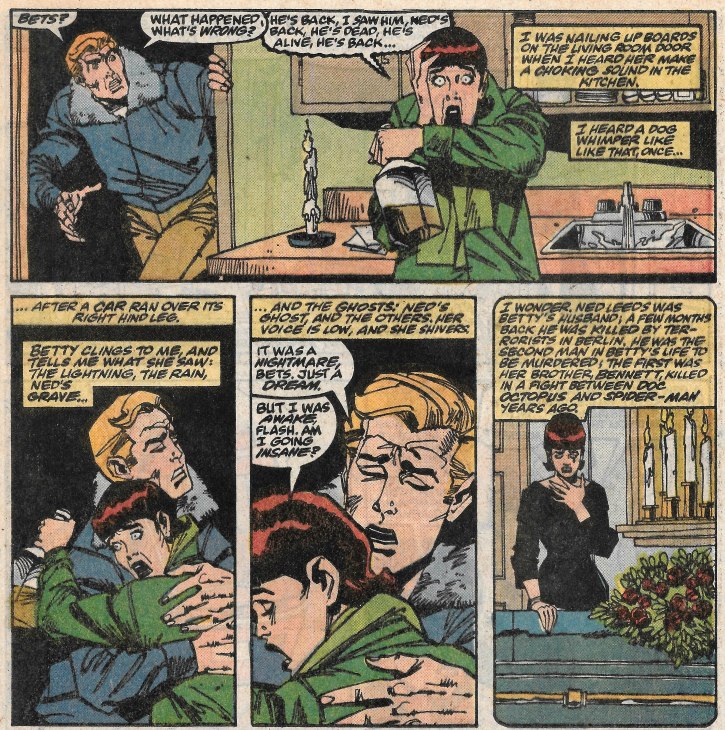 Neither. It is Betty clearly going off the deep end into the pool of clinical depression after losing both Ned and her brother. Also maybe the drinking. Current housemate Flash "I used to call him 'Puny Parker'" Thompson, expresses his concern for her well being. 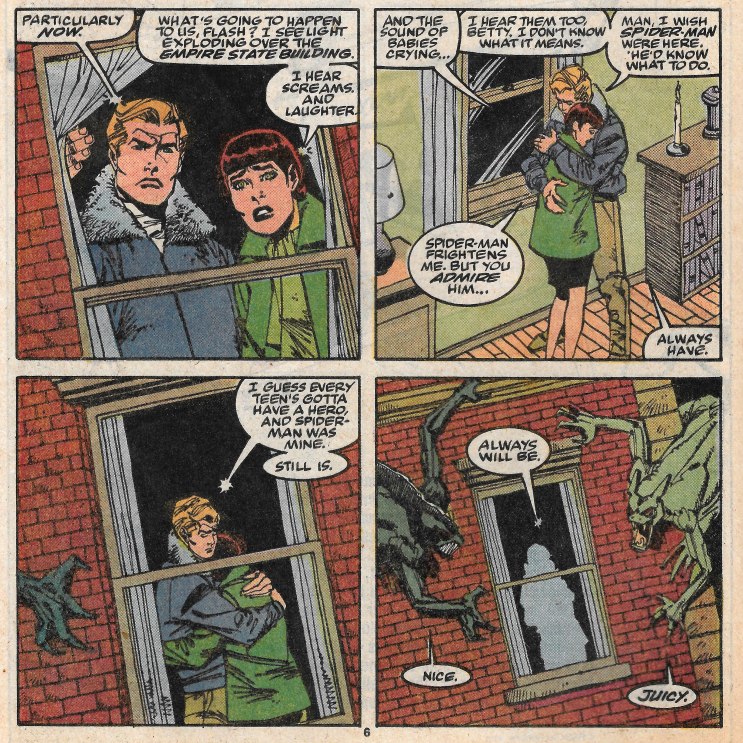 As do the demons hovering outside her window.

Flash ascends to the roof gather lumber to keep out of their brownstone apartment in a New York full of crazy exorcist type happenings. He's collecting lumber to board up all the windows. What he encounters is his hero, Spider-Man. 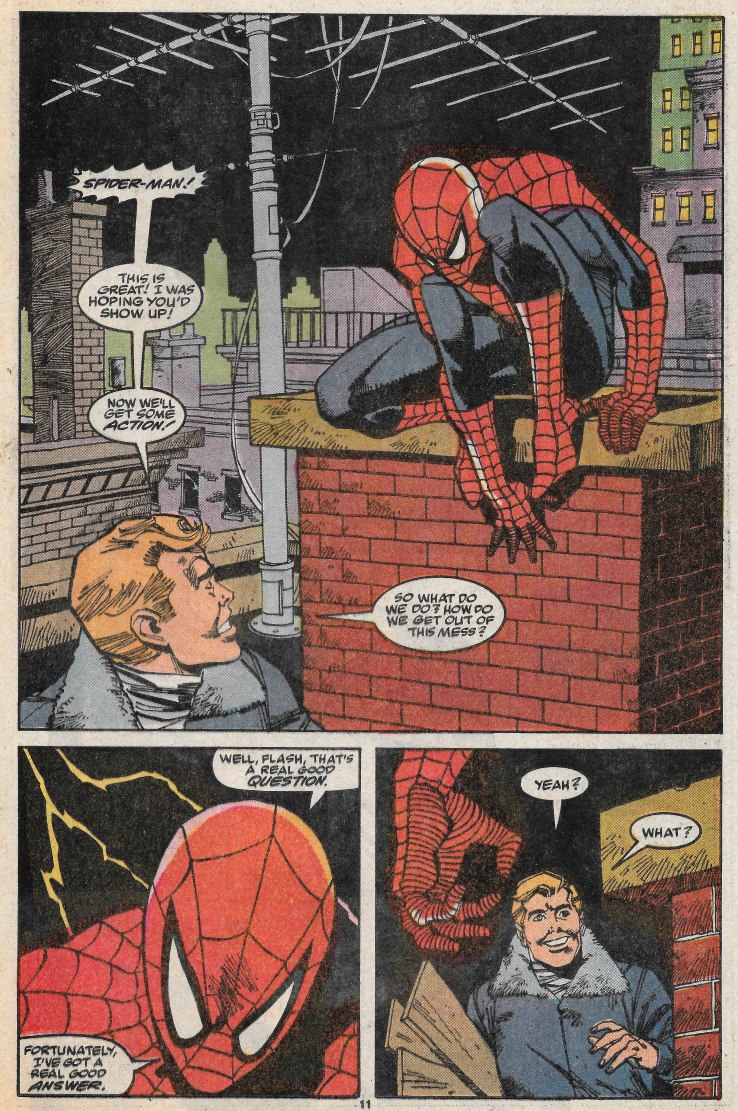 A decidedly upset Spider-Man, it appears. 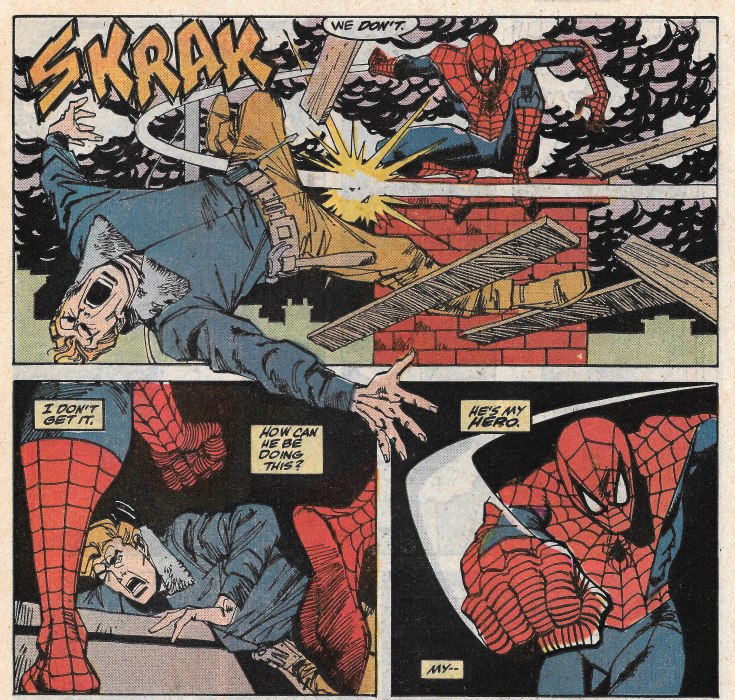 I love the slow pause panels on the prior page bottom that give this smackdown weight. We can feel Spider-Man's repressed anger building up in those two bottom frames juxtaposed against Flash's optimism and hope. 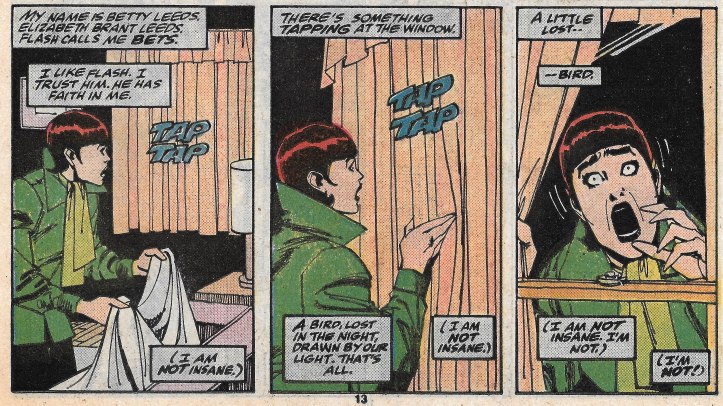 Likewise in this build-up sequence for the reveal of the zombified remains of Ned Leed for Betty. 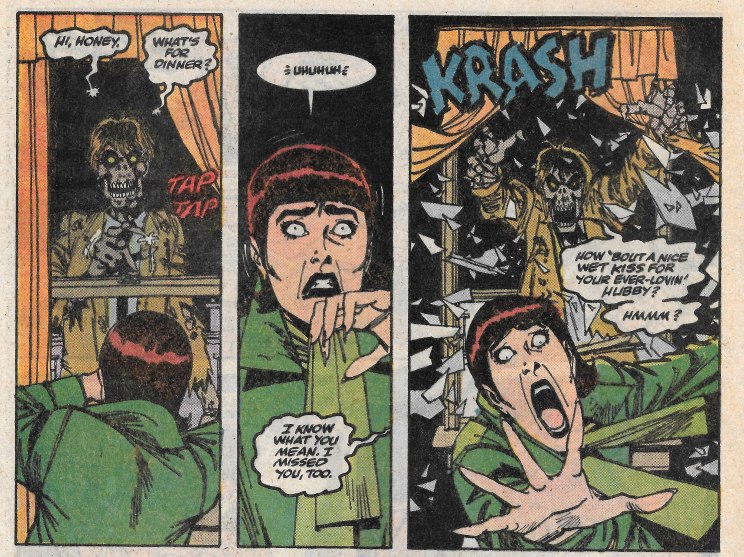 Outstanding job with the pacing of this book. Undead Ned chases her through the house and downstairs, menacing her all the way and encouraging her to give up. She locks him out of the bedroom and cowers by the door.

Meanwhile up on the roof, Spidey-Demon has Flash trussed upside down for some reason. Why? 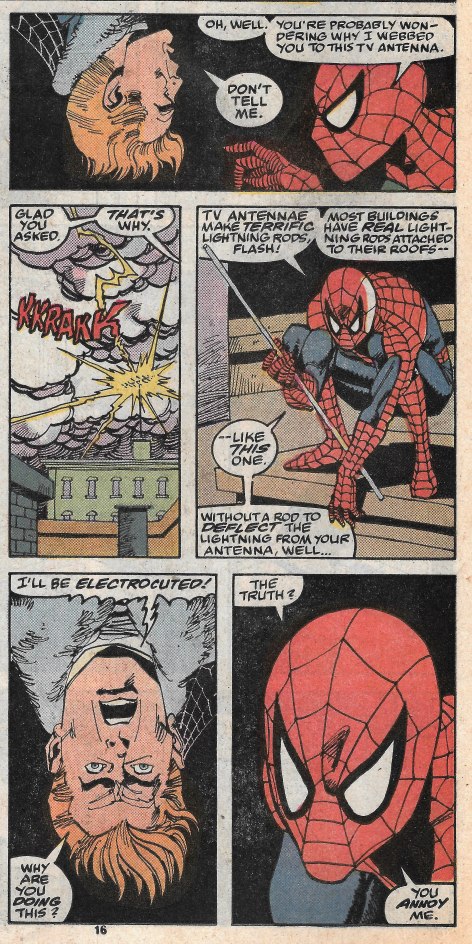 Ahh. That makes horrible, terrible sense. Flash has a moment of inspiration on how to get out of this mess though. 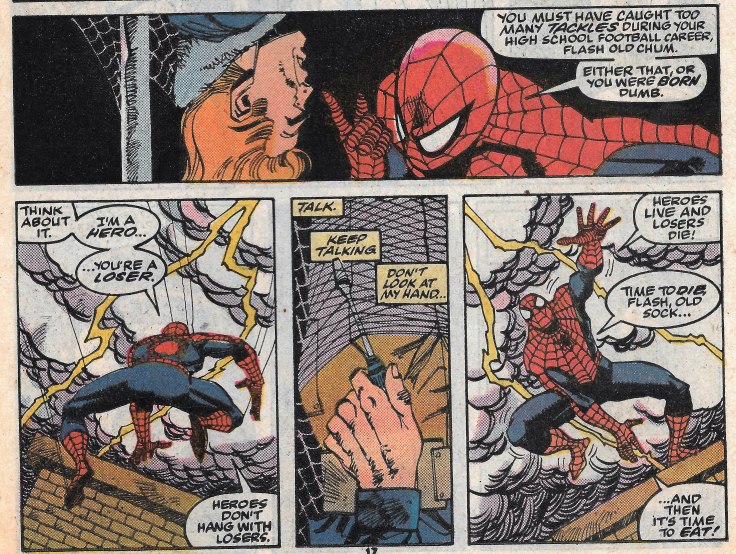 Betty starts hallucinating again or at least this LOOKS to be a hallucination. 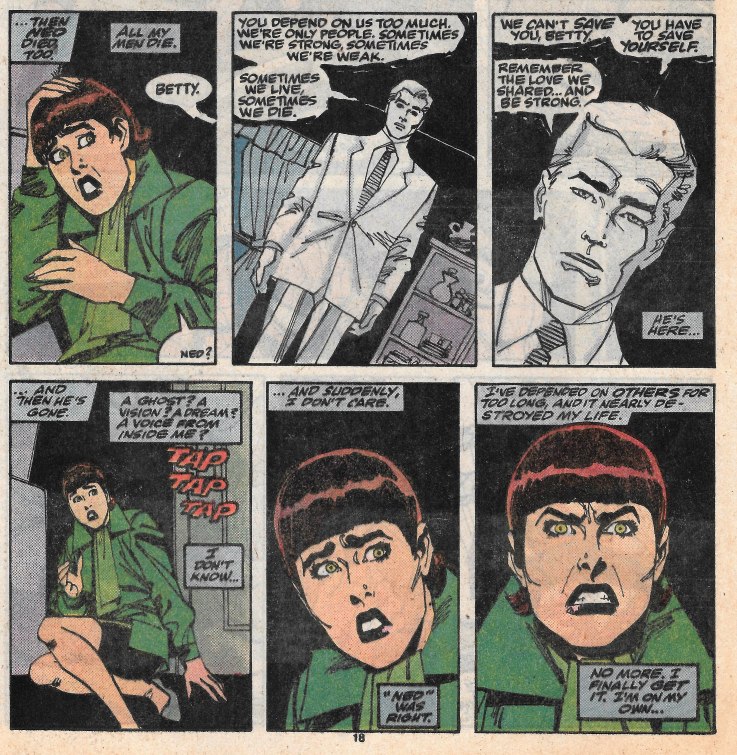 Ghost Ned makes far too much sense though and Betty finds the stones to fight back. Flash breaks free and does too, tackling his attacker and pulling off his mask to reveal… 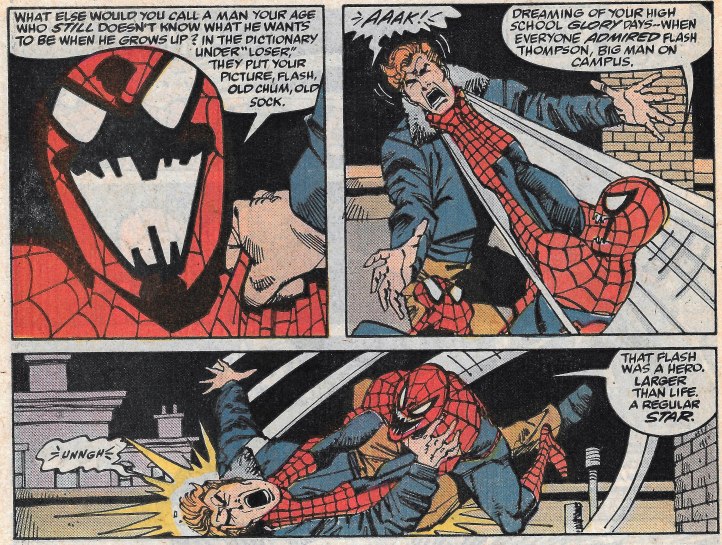 …A scarier Spider-Man mask underneath. After a bunch of rolling around on the roof, the take a header off one the corners, Flash grabbing the antenna just in time. They crash into the Thompson's apartment where Betty has been busy lighting candles. She shoves the gas heater into phony Undead Ned's gut and they hightail it out the front door in time for this. 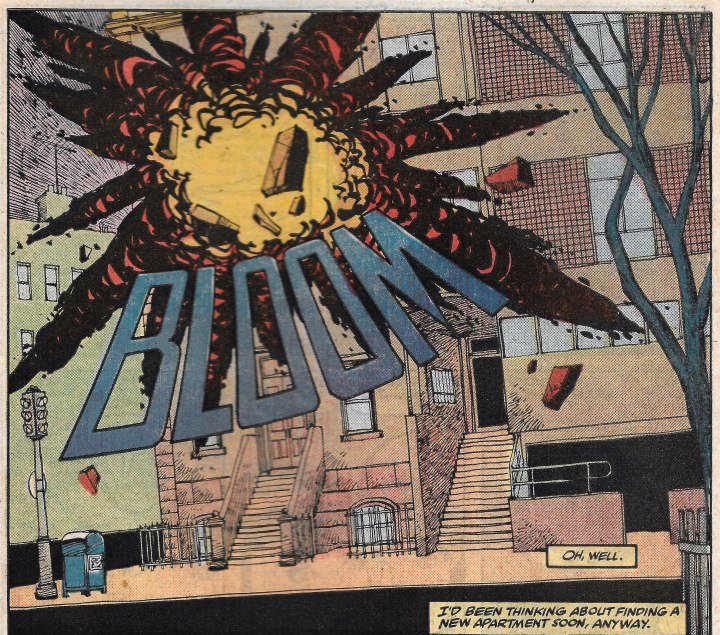 A final panel swing by of the REAL Spider-Man in a restored Manhattan skyline and we wrap this tale up. A nice treat out of the Inferno storyline with characters seldom given this kind of space to breathe. I liked it quite a bit. 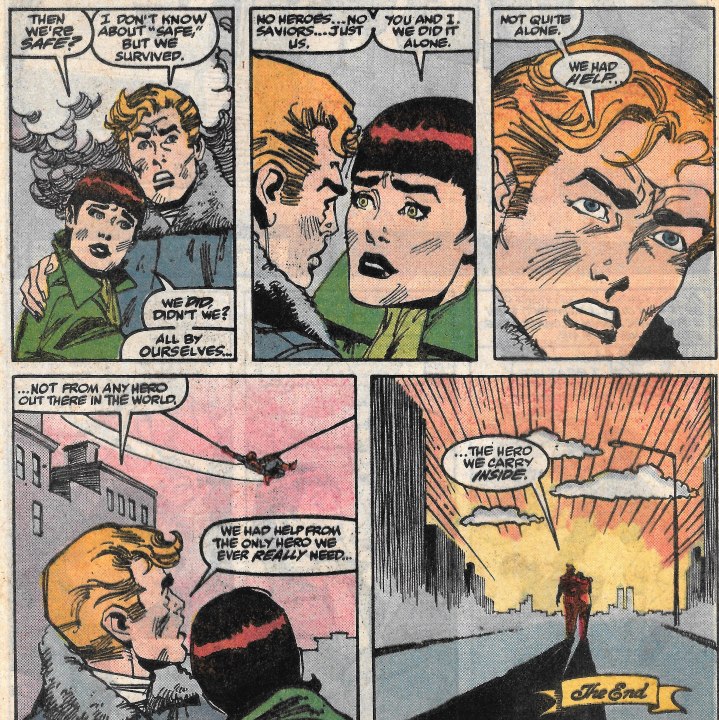 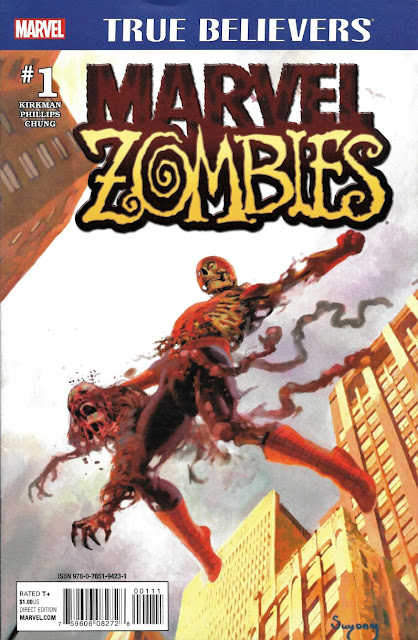 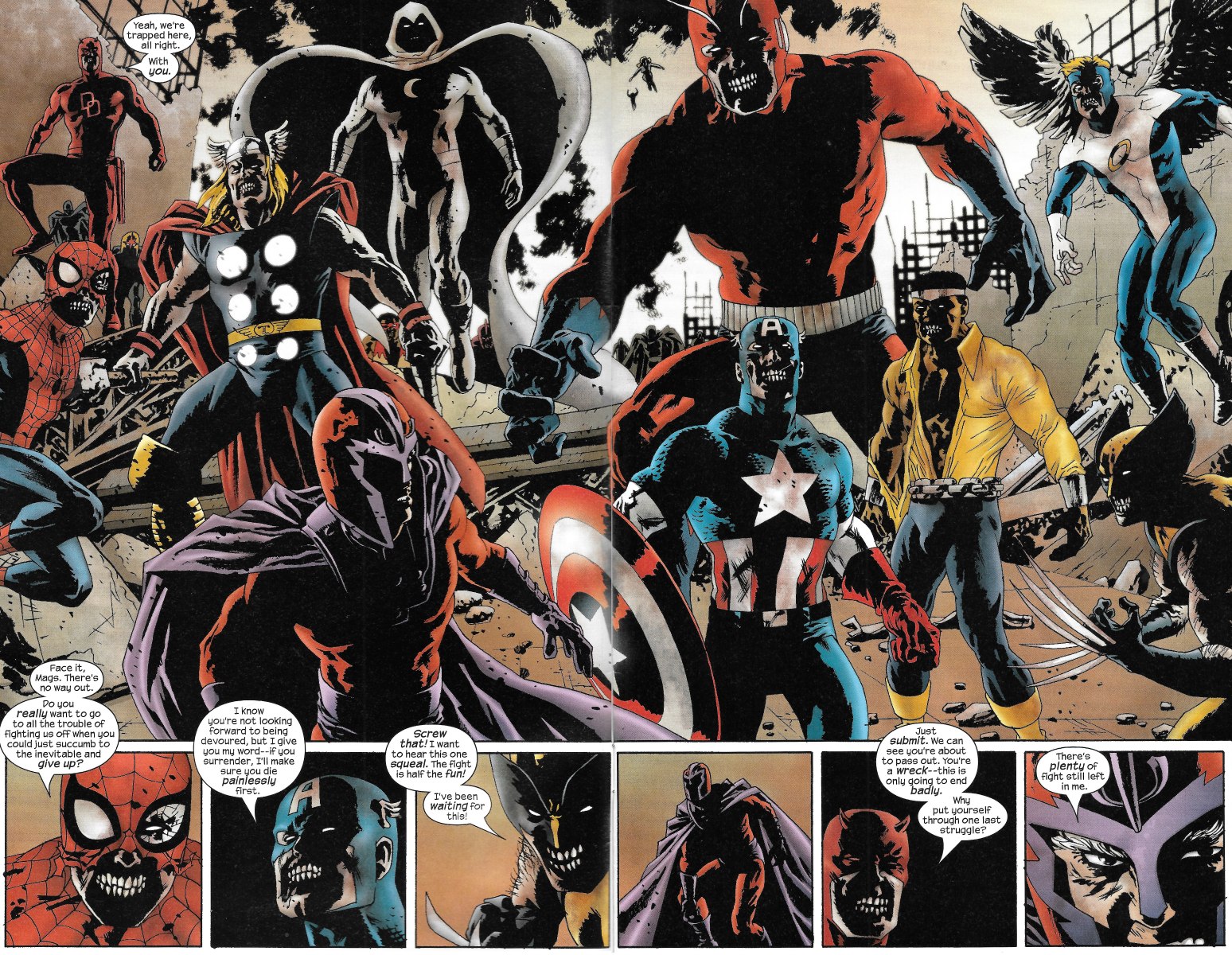 Those are the zombie versions of Spider-Man, Daredevil, Thor, Moon Knight, Giant Man, Captain America, Luke Cage, Angel, and Wolverine. I give you the Marvel Zombies, ladies and gentlemen. On a world where Sentry returned infected with a zombie virus, all the humans have been wiped out and only the Marvel superheroes remain. And boy, are they hungry!

Magneto isn't having any of this, though. 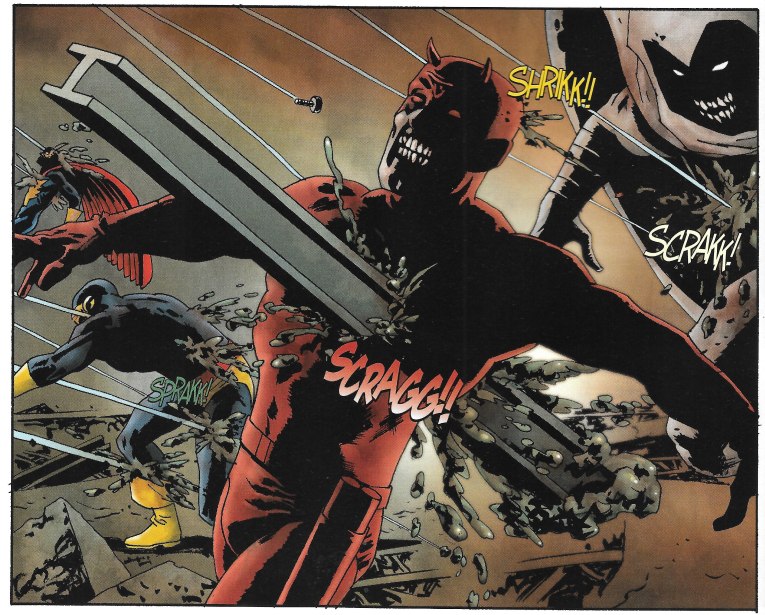 And that's the fun of Marvel Zombies: watching these guys get torn all apart, something that this book gives you scads of. Just take a look at Cap and Spidey here. 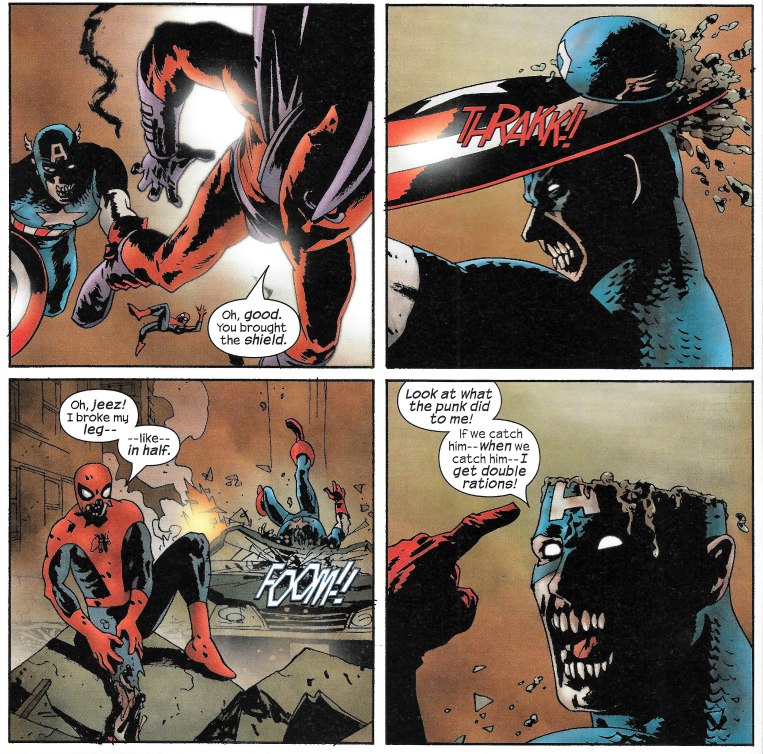 The other thing it gives you is heroes mercilessly murdering the villains. Those are kinda fun too. The idea of this is to reverse roles and make the greater evil into the lesser. I mean it would be hard to argue with Doc Doom ruling you with an iron fist if that iron fist was also keeping you safe from being eaten by filthy zombies, right?

In the stories we get the best of both worlds, and this comic knows it. So cue up the music, Maggs is going down for the count. 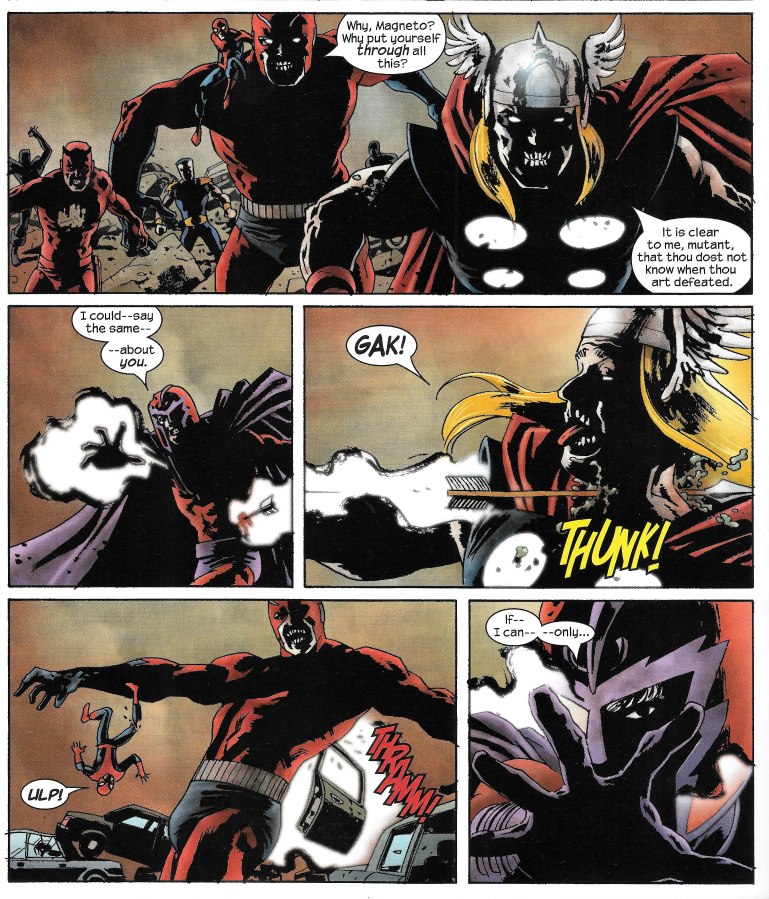 But not before getting some licks in. 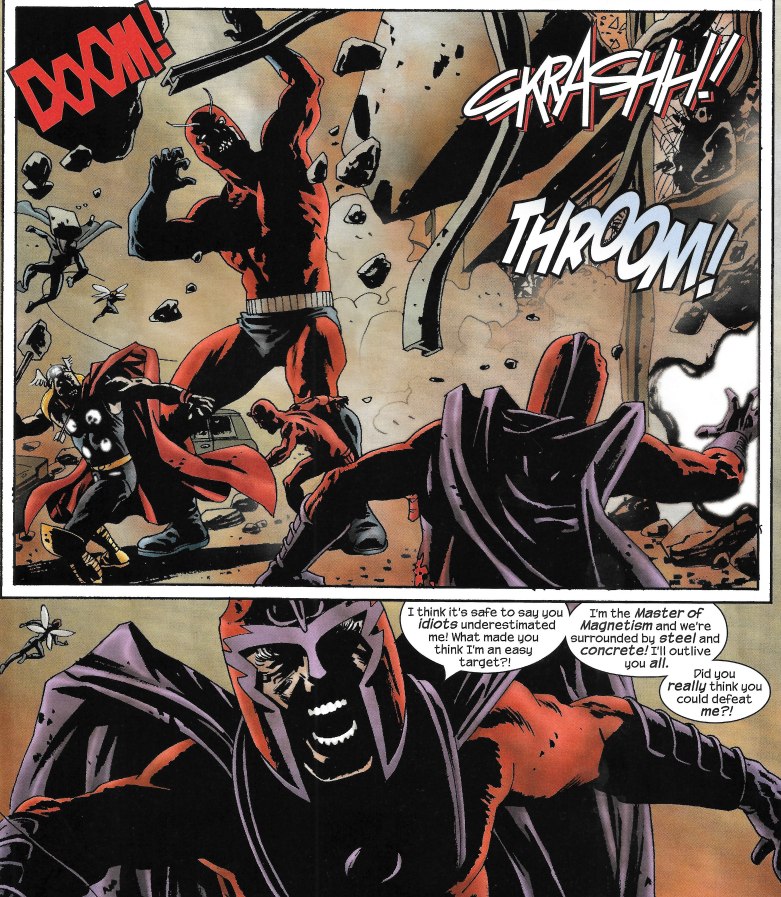 This is similar to kids bashing action figures together. Just mass destruction on all concerned. 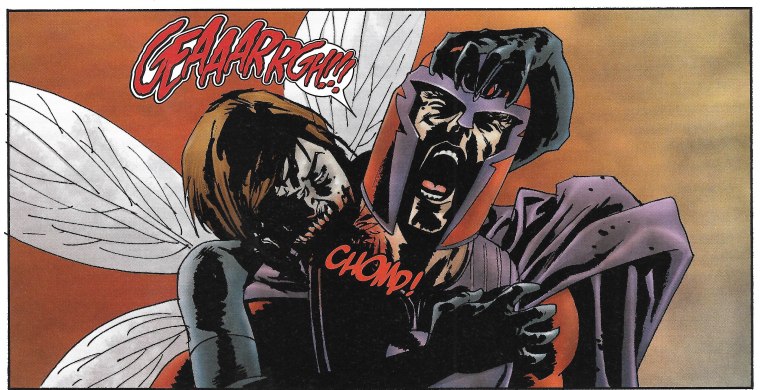 So the other thing the Marvel Zombies books are about is gross-out adolescent humor about zombies. And I will shame-facedly admit I giggled at all of these. Although I am skipping the part where they rip Magneto to shreds and chow down on him. I mean even I have my limits for this kind of stuff. 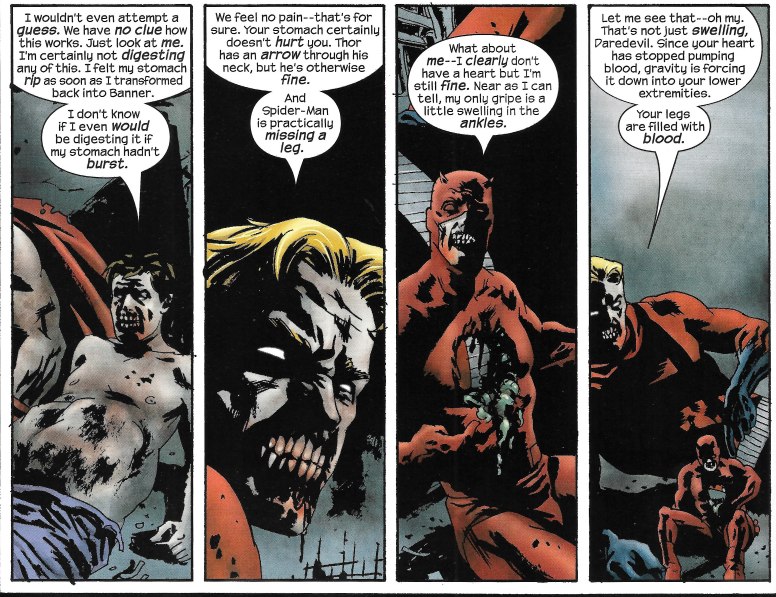 Although I DO enjoy stuff like zombies calmly sitting around chatting about their predicament. 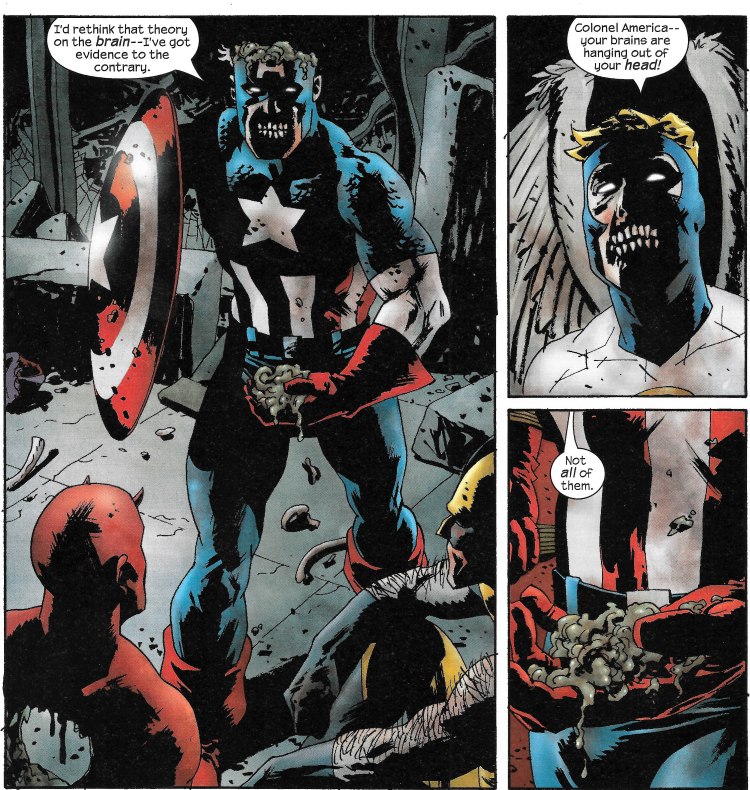 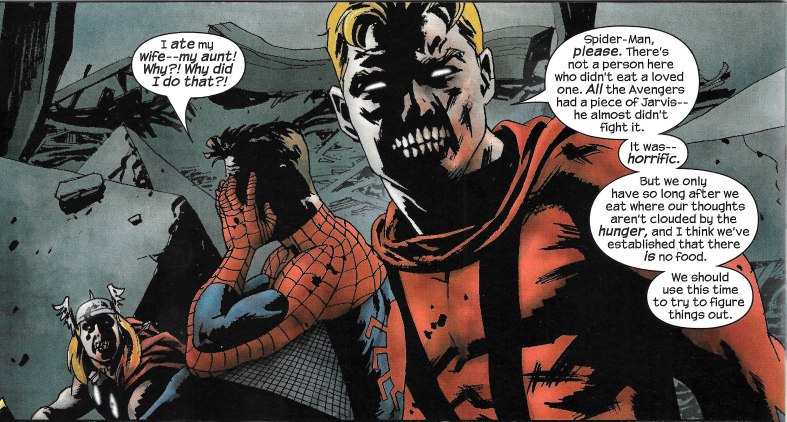 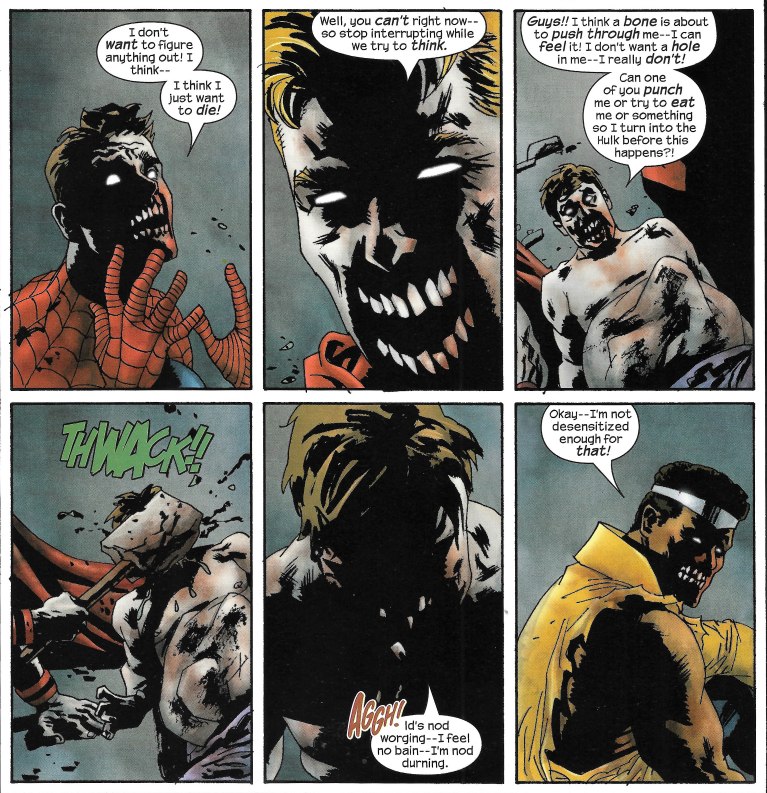 and the limits of zombie physiology.

Which brings us past all these nasty zombie superhero pictures to the end of the first chapter of Marvel Zombies number 1, and ending that foretells an series conclusion that makes a bunch of sense. 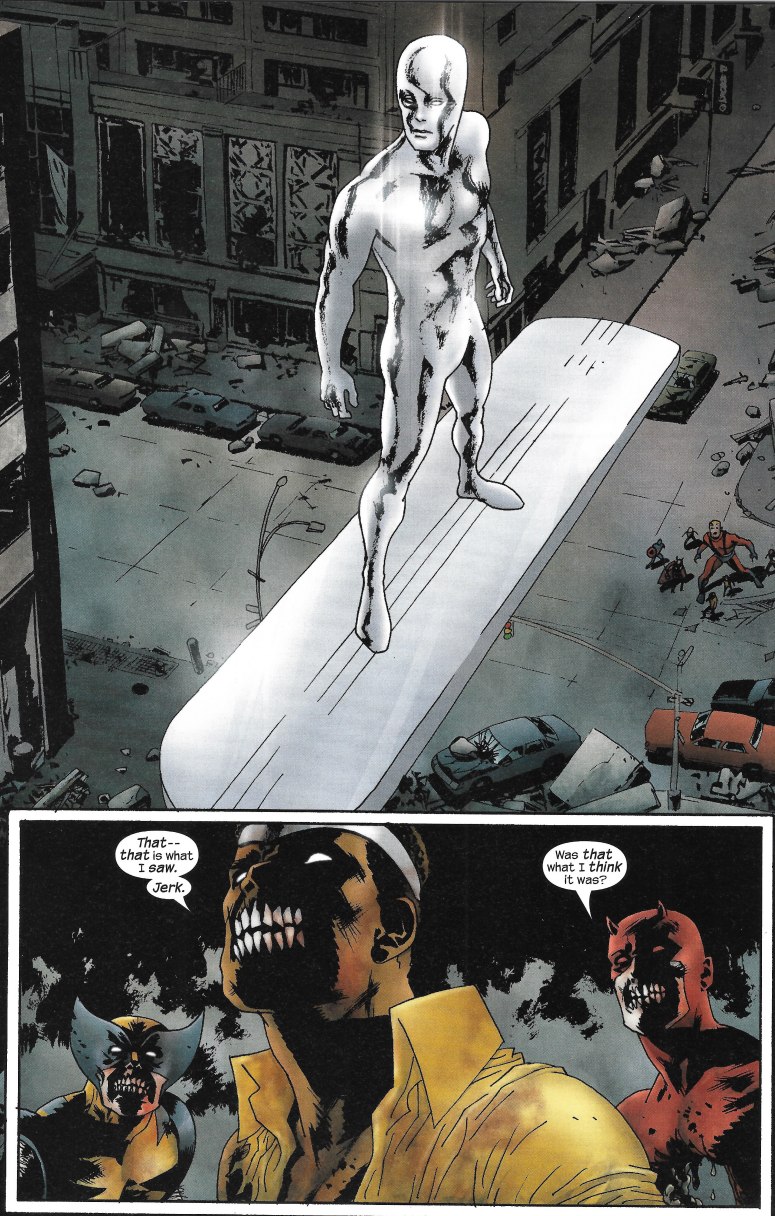 Maybe next year we can look though DC's zombie fest, that little event called Blackest Night.
Posted by SonOfCthulhu at 5:48 AM