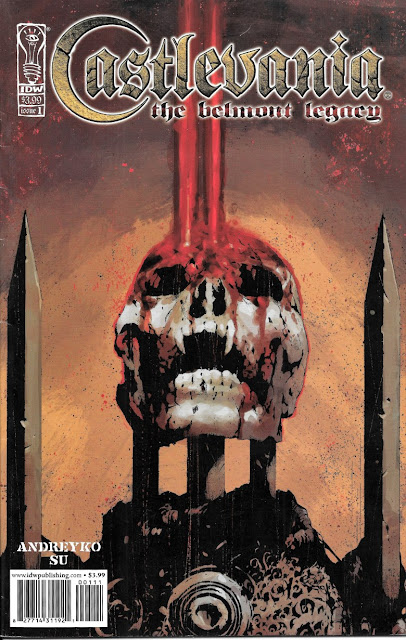 A bloody slow start to this video game vampire series

Vampires are classic old-school horror villains. So it should come as no surprise that once the Nintendo Entertainment System took off in 1985 that it would only be two short years before someone turned them into video game fodder. 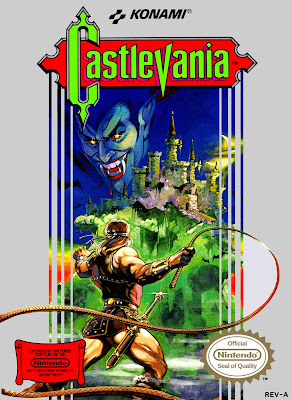 The title was called "Castlevania," which anyone could tell was like screaming "Dracula infested Castle in Translyvania". You played as Simon Belmont, a vampire hunter as the explored a castle (duh!) that only appears every 100 years. He spent his timed side-scrolling existence fighting Frankenstein's monster, Igor, some mummies, a ghost bat, Medusa, and the Grim Reaper before finally facing off against Dracula himself. His weapons of choice were jumping, whipping and throwing knives. Once you beat the game, the entire castle crumbled apart.

Since that first game there have been 28 releases bearing the Castlevania title across various machines and platforms and it has evolved from a simple sidescroller to a more advanced sidescroller with open worlds and rpg elements. 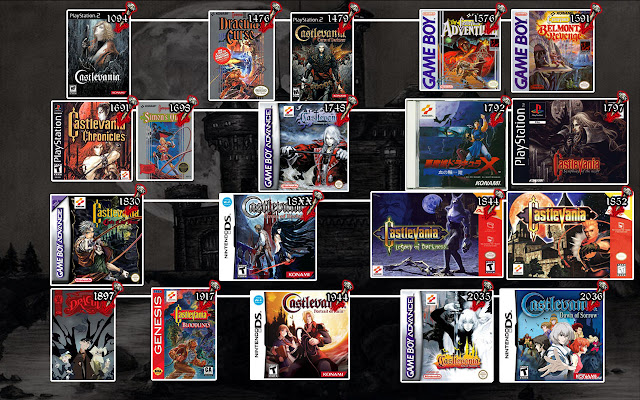 To be honest, I've never played Castlevania. I think I was scarred by the difficulty of the arcade hit "Ghosts and Goblins" and never gave this one a try. 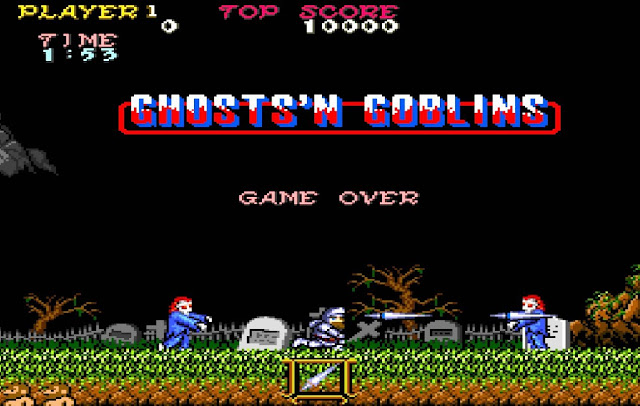 "Ghosts and Goblins" ate my lunch back in the day. I think every quarter I fed into that machine amounted to about 10 seconds worth of actual play time. Many other people had much, much better luck, including buddy Vic Sage.

As for Castlevania, I'll rely on other sources to tell me how it faired,

But a game with no coinslot sounds right up my alley. The play looks intriguing in the same way that all the Super Mario Bro's screenshots do. It is a sad commentary that I missed the NES years by having skipped consoles to play true computer games back in the late 80's. Today I would pick up a controller and give it a whirl. There's even one available for Wii U, which I'm trying very hard not go get at this very moment.

But long lasting game doesn't mean good comic tie-in. Unfortunately, I feel very unable to judge how the action part of the book will be as…well, let me show you: 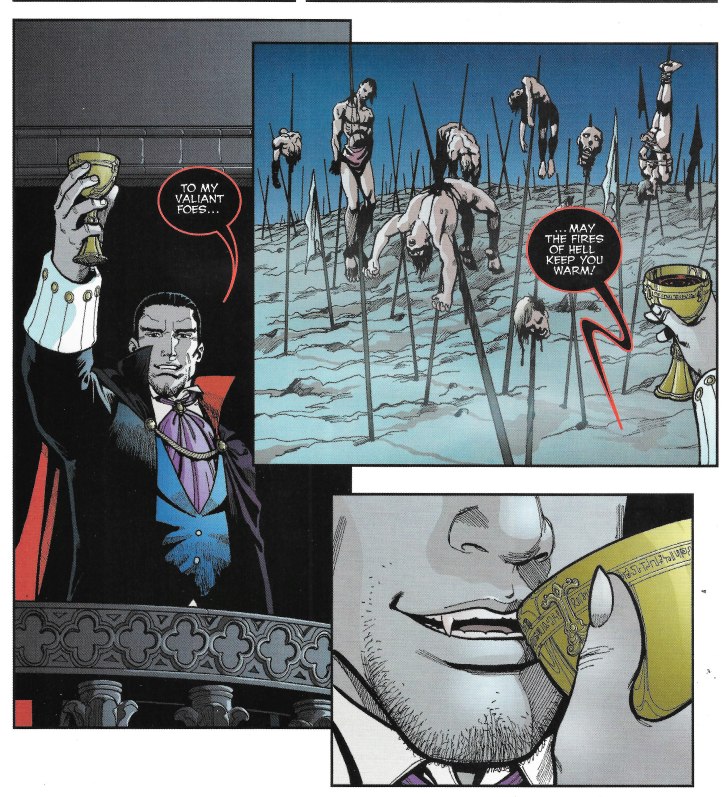 We start out our tale with Dracula, or whomever Castlevania has as the head vampire in the game universe, just hanging out on his balcony, chilling, sipping a little blood and listening to the cries of the impaled with his hot, buxom vampire brides.

The art here is lovingly rendered by E. J. Su who does a good job of capturing the feel of medieval Romania even if it does slide a bit into what I would term "adult anime characters" look. The story is workable for a Dracula/vampire tale. I mean, it's no Death Dreams of Dracula, and I say that in a GOOD way. However, it is slow. Very slow. You'll see in a bit. 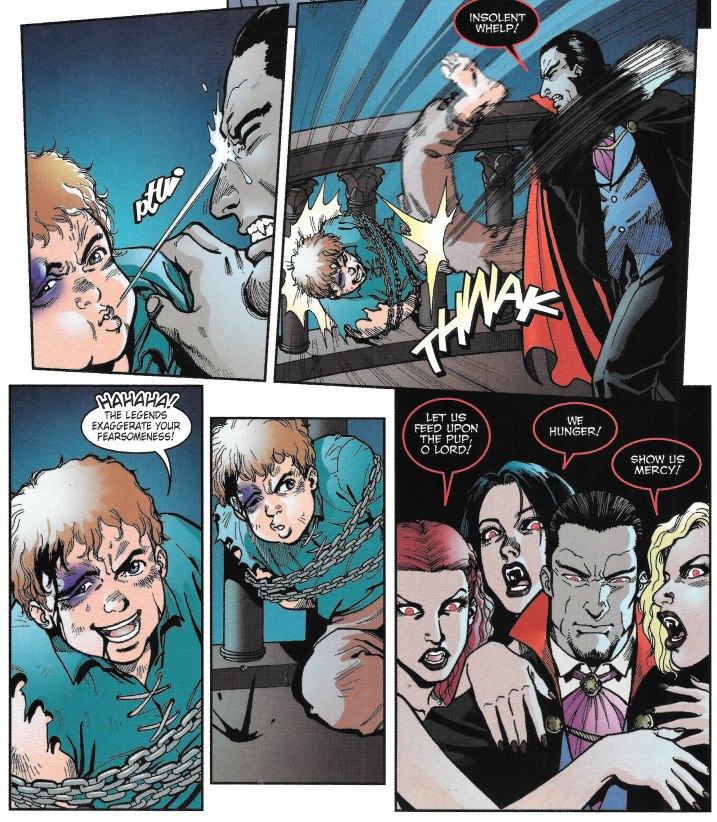 With a command, the girls drag out the son of Simon Belmont, Dracula's mortal enemy. It looks like he's as headstrong as his dad and just as committed to fighting vampires. Sadly, it also appears he's going to be lunch for three gorgeous vampire vixens. Not a bad way to go, necessarily.

But wait! What's that sound I hear? 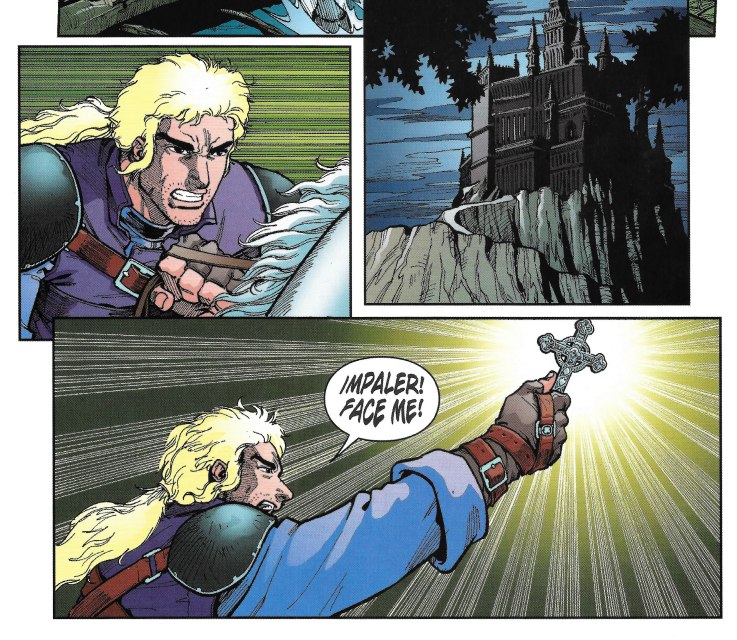 Why it is Simon Belmont, come to rescue his son and destroy all the vampires with his trust whip, er...CROSS. (No offense here, Simon, but a whip makes way more sense in this case.)

And as Simon brandishes that cross for all it's worth, Dracula reveals that he has arrived…TOO LATE! 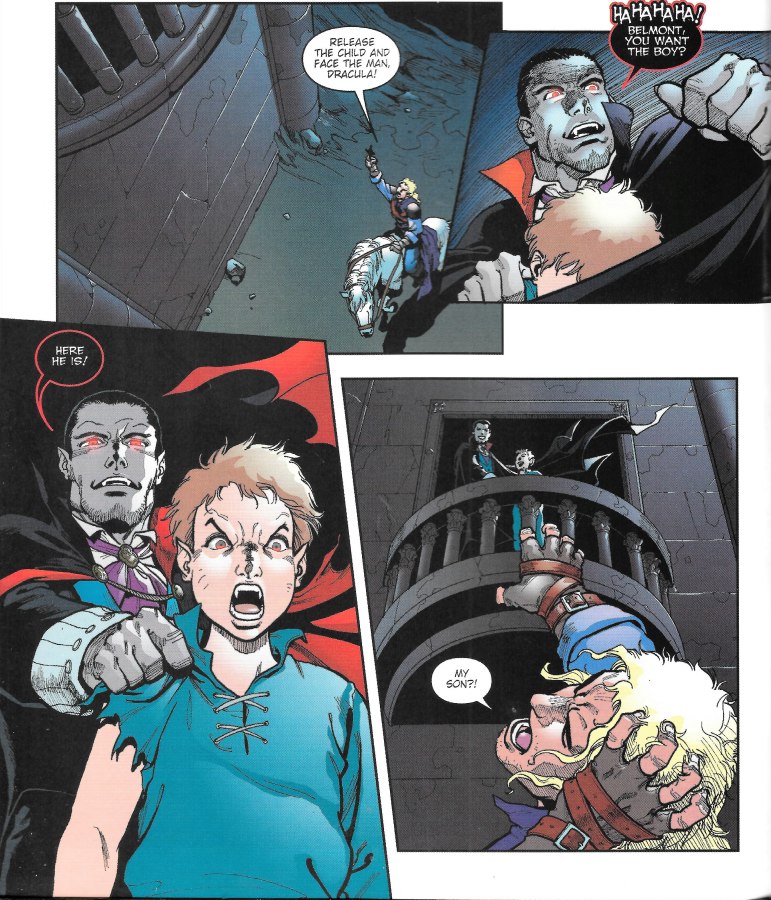 Which promptly gives Simon a killer migraine. Which is understandable. I mean look at that kid's face. He's pure evil now. How are you going to get him to clean his room or eat all his vegetables? 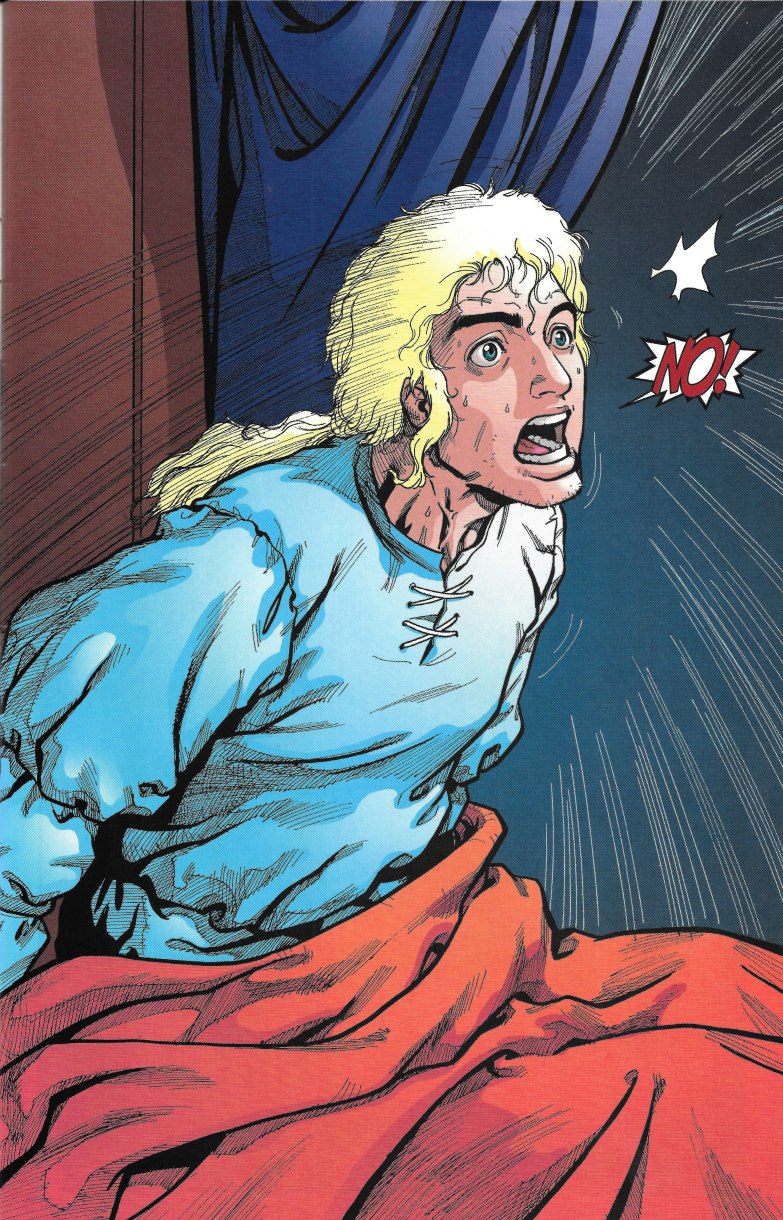 Yup, it's Bobby in the shower time, folks. Turns out Simon is dreaming about a kid he doesn't even have yet. In fact it is a few days before he is set to wed to the woman who will bear that child he doesn't have yet. So...anxiety much, Simon?

Part of me wants to analyze why you would be having these types of nightmares before your wedding day, but a bigger part of me wants more of that vampire hunting action. Sadly as it is here, on that point the book lets me completely and totally down. That is the last we will see of Dracula until the final splash page.

All the rest of the book follows wedding plans and court intrigue with the cult that will end up bringing Dracula back.

Is there anything in here that might satisfy? I don't know, since much of it is telegraphed things like this: Simon's bride to be, Illya Riktor is surprised in the market while kissing a statue of the virgin Mary by nobleman and cult leader Lord Bartley. Notice how telegraphed the foreshadowing is. 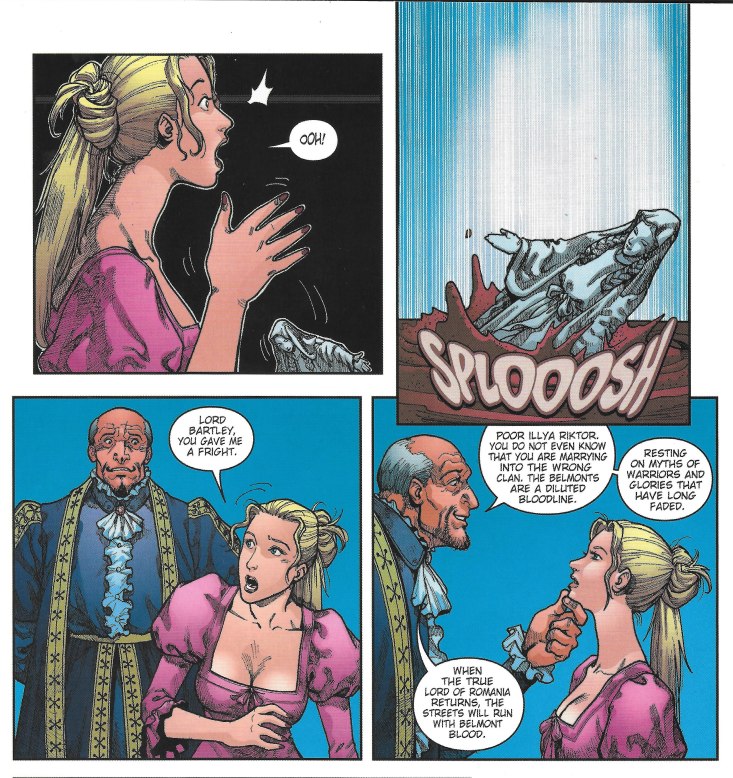 "Here comes an evil character!" To me it is made worse by his public declaration that Dracula will return and he is the "true lord". Wouldn't you think that would be heresy? Why is this guy still a nobleman? Slap him in irons and put him in the deepest dungeon you have.

Instead we just use "mildly rebuke him." It's not very effective. (Damnit! Pokemon Go is still creeping into my non-Pokemon related reviews.)

I did find this part kind of funny: 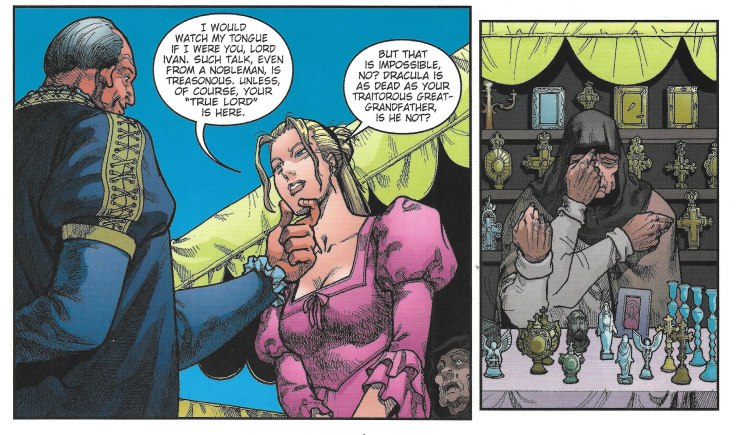 At the mention of Dracula's name, this old woman selling religious trinkets makes like the sign of the cross but it appears that she is instead a three-armed mutant. And she misses that forth touch to complete the cross. At least I think she's make a cross. Maybe the religious symbol in Castlevania game Romania is a pyramid or something. 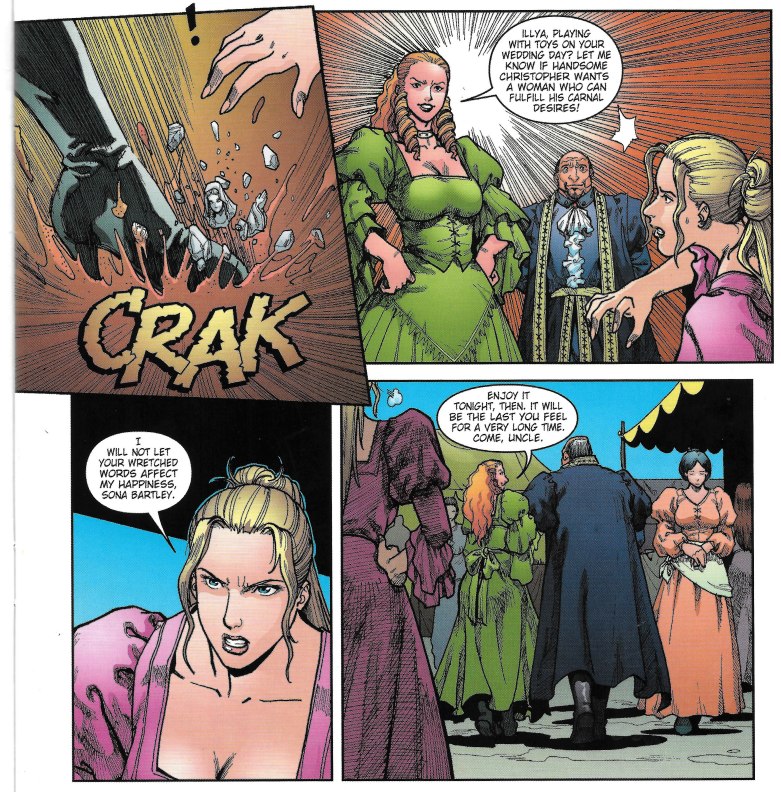 We also get to meet Lord Bartley's evil neice. Mark my words, she's going to turn up all vampirey in future issues, I can just tell. No way Dracula could resist a woman of such…ahem, juiciness.

Later these two plot to bring back their lord and master while instructing their driver to take them to the other "believers." See what I'm saying here? Dungeon, chains, both of them gone…no problems.

From there we turn to Simon who is all wedding jittery. His friend Sergei arrives. And as Illya gets dressed, Lord Evil-face's neice kills the guards who are in front of Dracula's tomb. The blood runs across the stones to …somewhere? … but the exposition from Lord Bartley tells us that Dracula's bones are drinking that stuff right up! 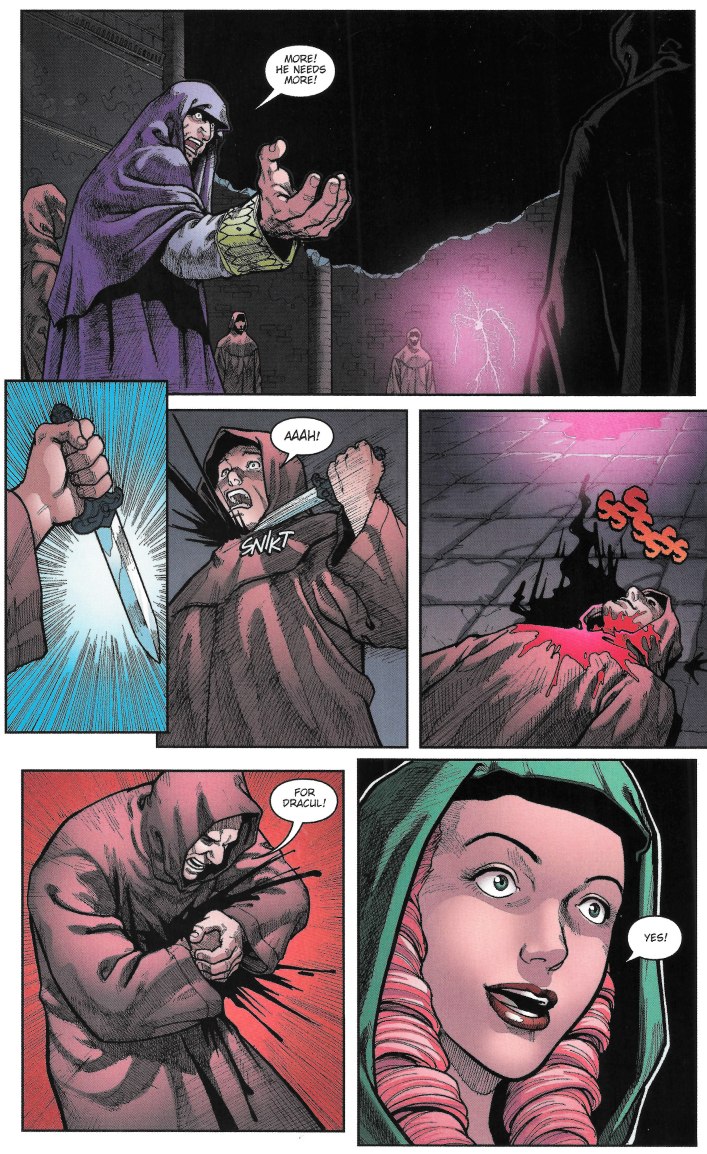 And while Illya and Simon tie the actual knot, those believers of Bartley's get their faith tested one final time.

This is all well and good, but part of me wants this stuff to move along a bit faster. I mean, this is a book about a vampire hunter slaying vampires with a magic whip. When are we getting to that part? 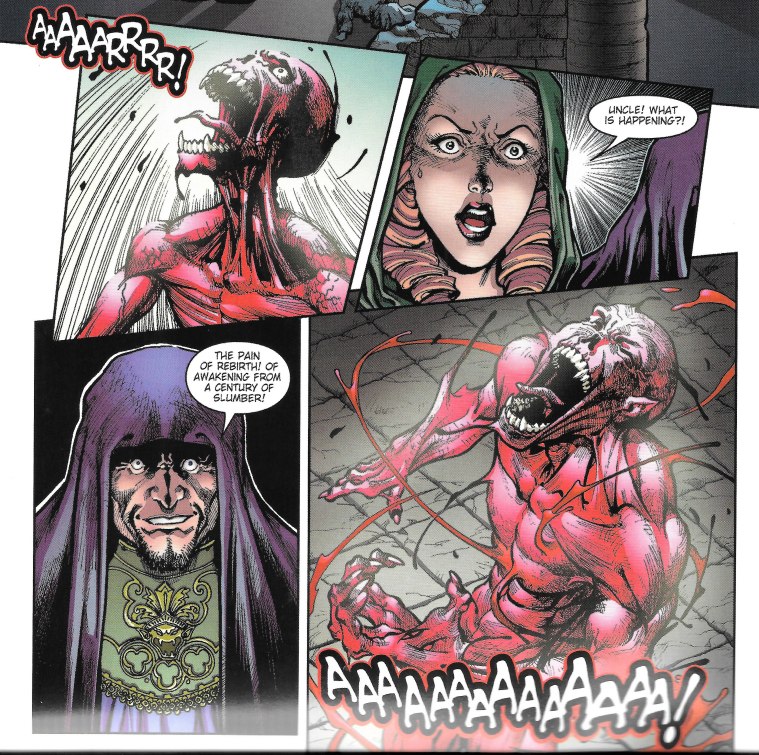 Come on! Come on! I'm wanting to get to the conflict part…

Some more standing around for Illya and Simon and then… 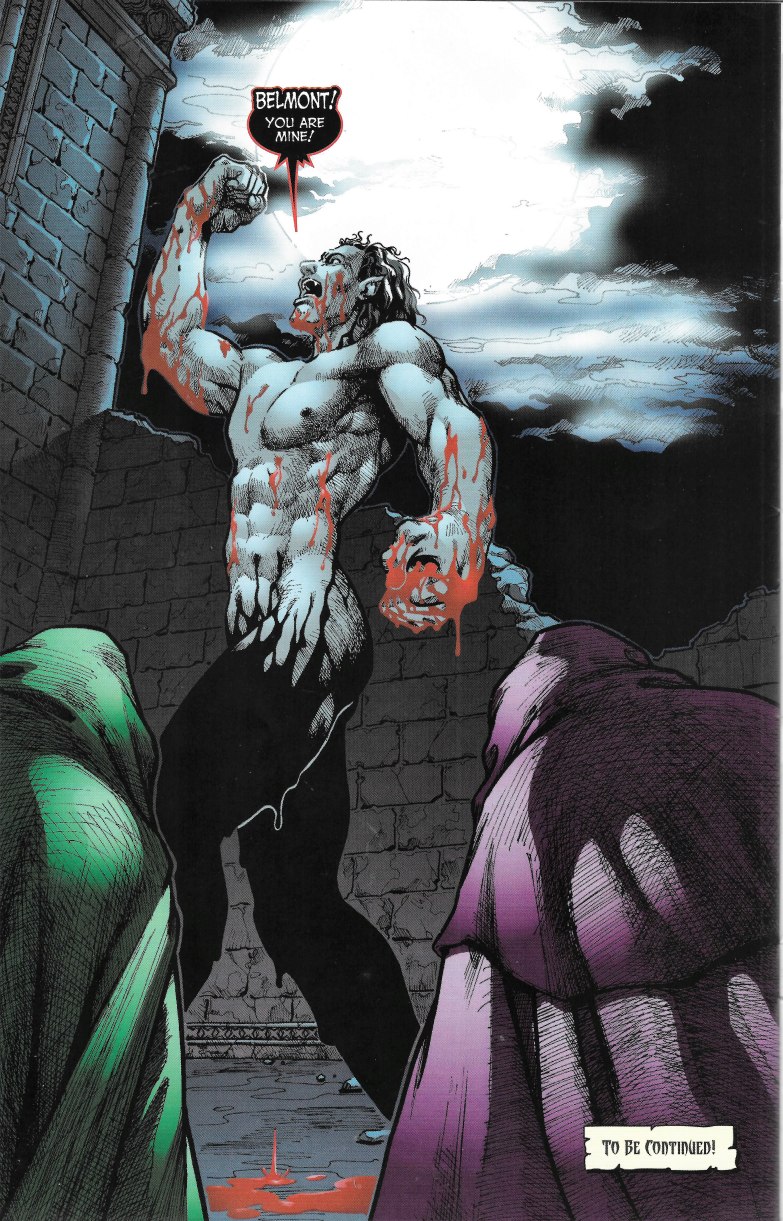 That's it. Issue is over. Tune in next time.

There's a lot of promise here that I wish had some kind of payoff in the short run. It looks like they are world building, which is well and good, but parts of me wants the visceral rush of a side scroller when this book is laying things out like a slow paced Final Fantasy RPG. One where extended cutscenes take up a huge part of the opening. Not to say those are bad, necessarily, just to say this don't seem like Castlevania.

If these are your bag, the art is great and the story works well enough. Just be aware you might be world building for a time.
Posted by SonOfCthulhu at 9:37 PM