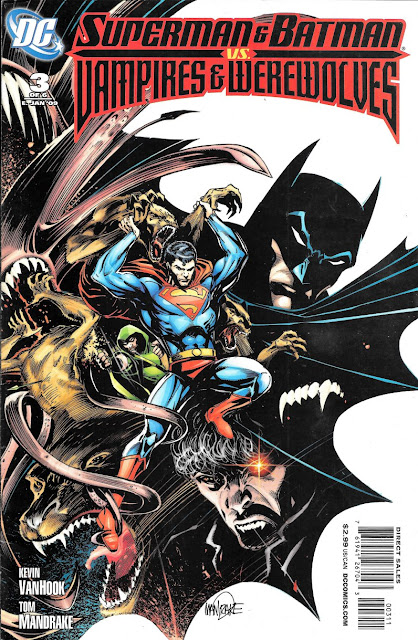 (Note: Chris is on Infinite Earths is doing Superman vs Vampires and Superman vs Werewolves, so I thought it apt to go him one better, mixing the two together and throwing in some Batman. Sadly, less appears to be more.)

With a title like that, you'd think you would know what you would get going in. However this limited six issue series by Kevin VanHook with art by Tom Mandrake is a kitchen sink-kind of affair that goes all over the place. I mean the premise sounds easy, right? However the execution is a bit complicated. The mini started off rocky with the first issue featuring Batman and Wonder Woman, with Superman not showing up at all.

And this issue, three books in, has Superman and Batman teaming up, but it is against this... 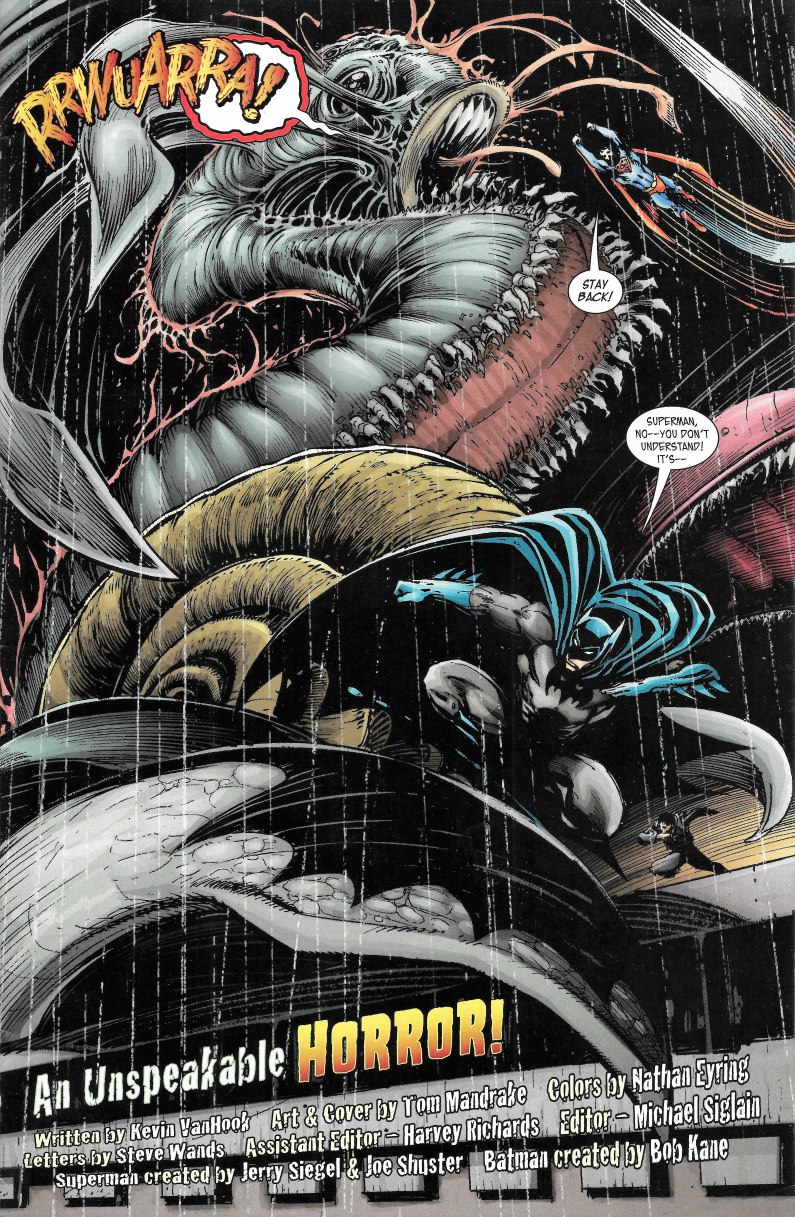 Which I'm pretty sure is my Gyrados from Pokemon Go. This apparently came out of someone's mouth and then grew to this size. So the title of this book is already starting to disappoint.

Superman tries to use his Invulnerability on the beast... 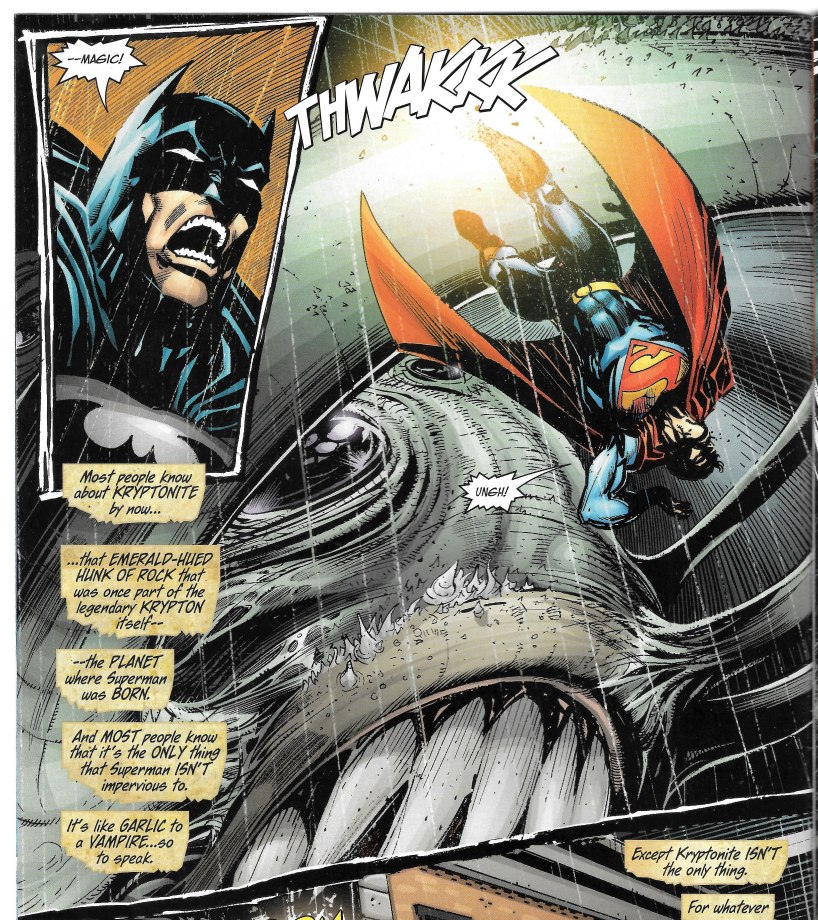 It's not very effective. Also, the attack has the added negative of hurting the man of steel. Appears this pocket monster is magical in nature. So Superman switches to ripping off a hunk of brownstone and smashing the beast with that. 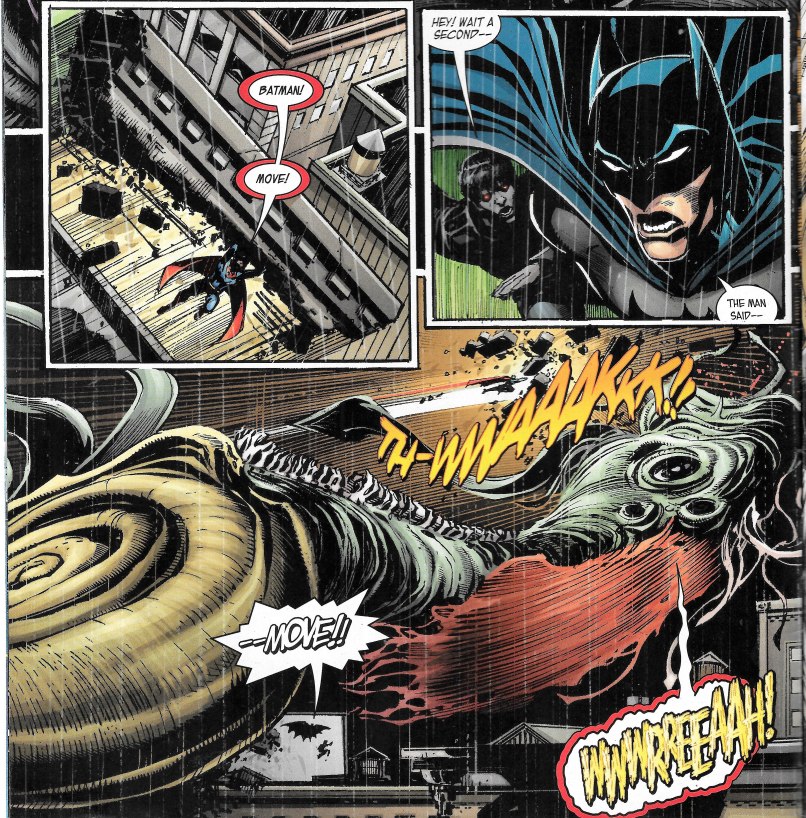 It's Super Effectiv….ah, it's not worth the effort at this point. Also it is about to be super-effective on two bums on the ground beneath the creature. Superman saves them at the last moment though. 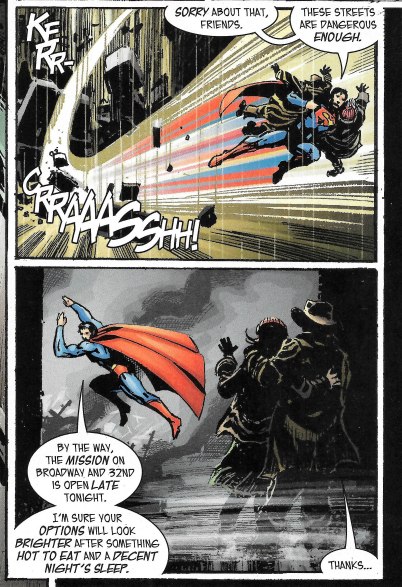 Oh, and the lad with Batman is Dimeter, who happens to be a good vampire. He explains that there is an evil scientist that created the creature. The scientist is named Herbert Combs (UGH!) who injecting people with a vampire or werewolf serum (which one isn't very clear) and is opening some doorway to monsterville or something and he has to be STOPPED!!! Or else … 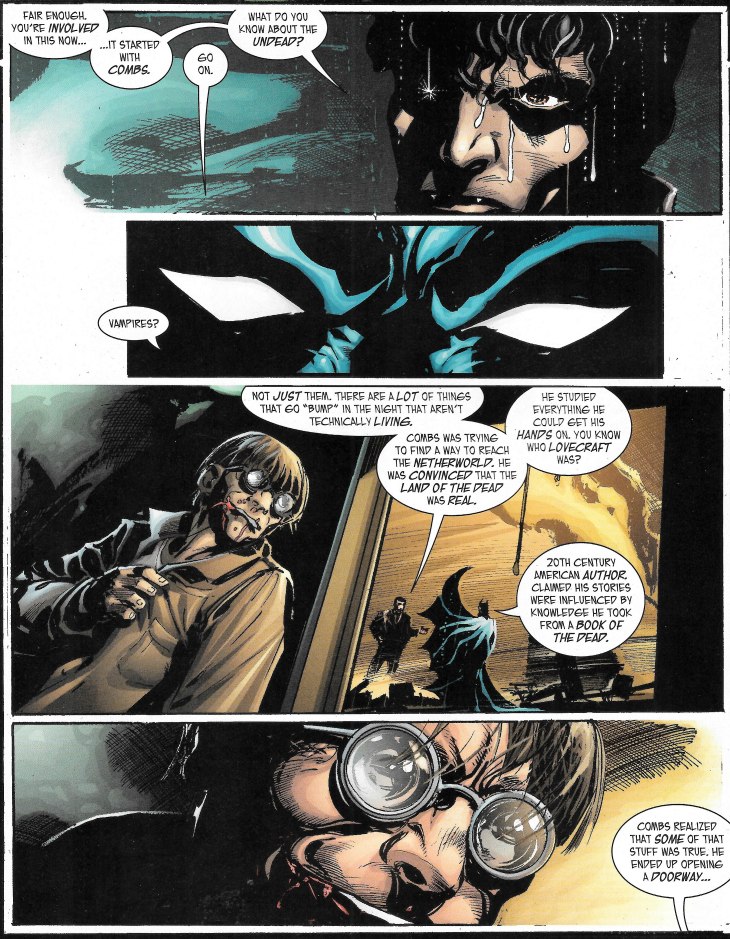 And I'm going to take a break right here and sum this one up before continuing. This issue is a mess. I've read the synopses on all six issues on the DC wikia page and ALL of them sound like they are a mess. For one thing they are tossing in references to H.P. Lovecraft stuff (Herbert West was played by actor Jeffrey Combs in ReAnimator and that name IS intentional) and this weird serpent creature with the tentacles…

But that's not what's on the placard. That's a completely different storyline there called RANDOM DC CHARACTERS Vs VAMPIRES, WEREWOLVES AND A HOST OF LOVECRAFTIAN CREATURES PLUS A MAD SCIENTIST. Vampires and werewolves – old-school, classic monsters. Tossing in the mythos on a whim is like adding additional ingredients to your cake recipe. And it isn't an unforgivable sin except when done wrong, which it is here. In every way possible.

This series is one sardines and rum filled cake with crème cheese lima bean frosting, is what I'm saying.

None of the story elements gel. Nothing is given weight. Everything is tossed off and things just "happen" so there is an action sequence. This tale stars so many of the DCU that you forget whose name is in the title. But worst of all is the fact that you KNOW in your BONES that certain sequences will never be explained while they are occurring.

Take the creature from the first panel. It came out of Combs' mouth and it ends up… 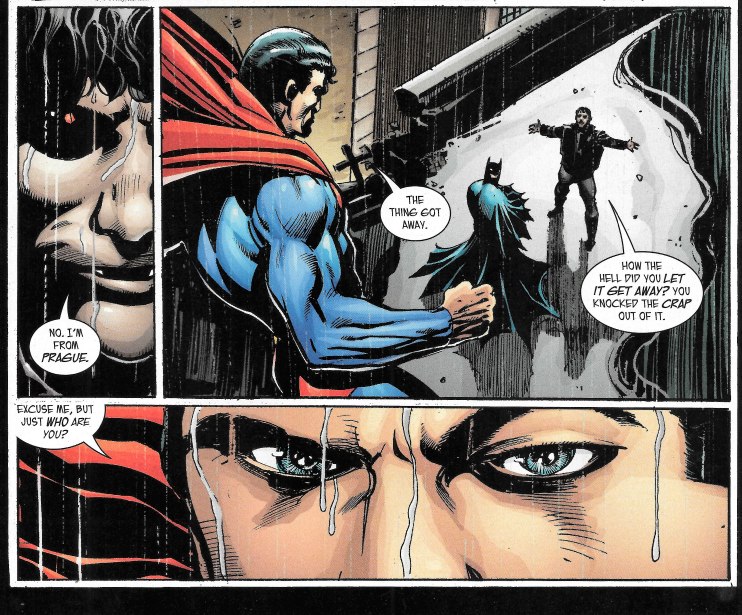 Vanishing. Until issue six's climatic battle. And Dimeter is barking up the right tree here. HOW DID Superman lose track of the creature. Oh sure he saved those two hobos that he endangered, but still. We are talking about a man who can hear sounds miles away, has the ability to see through most solid objects, and can fly at superspeeds. How can ANYTHING escape from Superman ever.

Plot. It can escape when the plot demands it escape because we can't wrap up a six issue series in issue three. Although they really, REALLY should have.

Instead VanHorn plods along adding more silly pointless encounters that pad the story at the expense of good plotting. He decides to add in this young man being attacked by a vampire who is saved by Superman…(yay, crowd pleaser!) 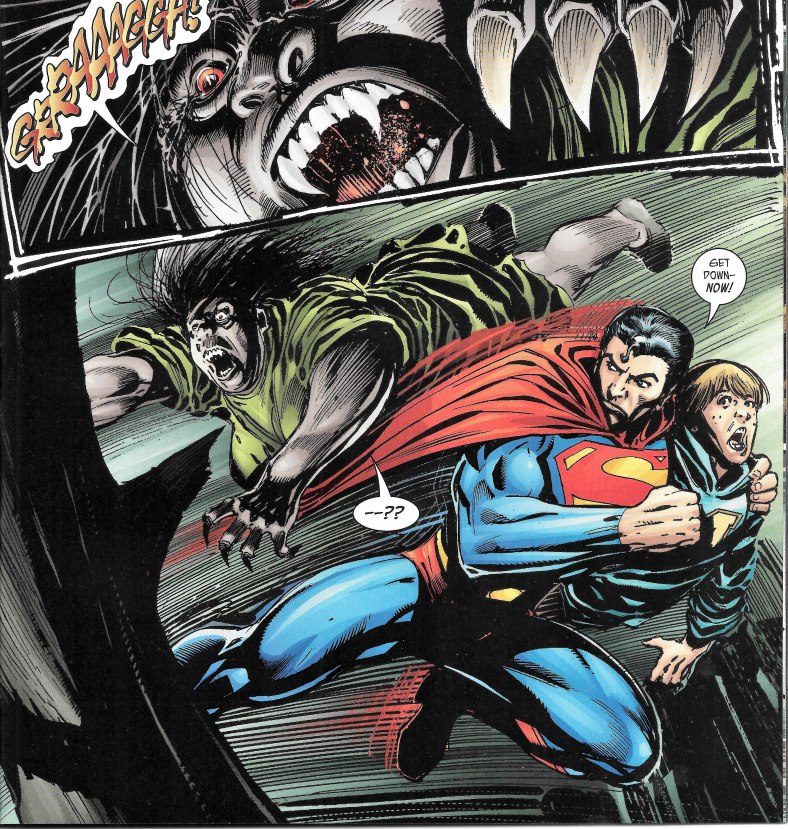 …who then gets distracted when a werewolf attacks, so he PUNCHES him to death (which Superman does ALL the time)… 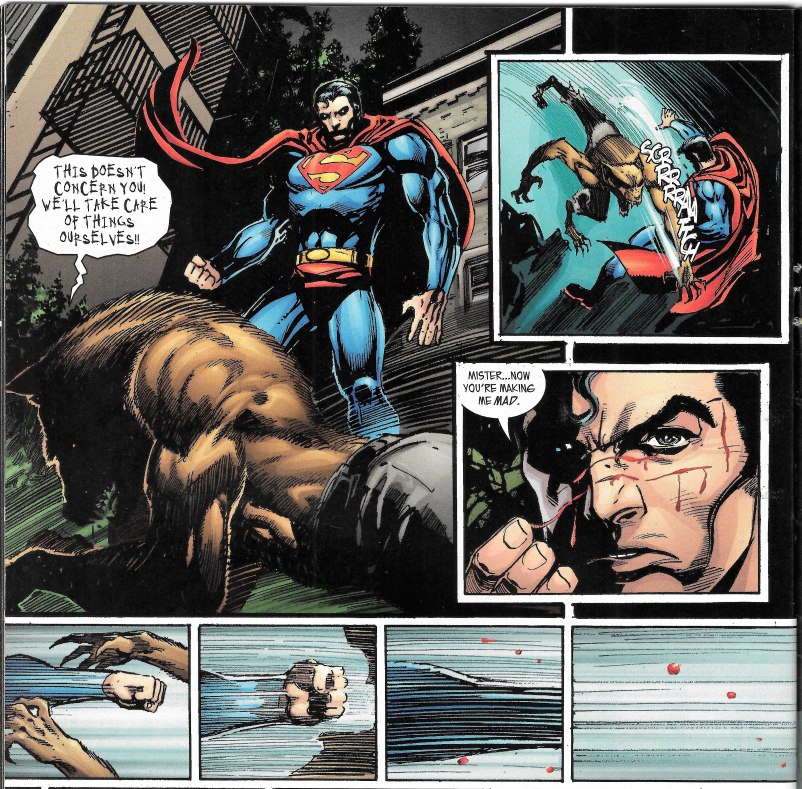 …all so the boy can fall into the clutches of the mad doctor, who then injects him with vampirism serum, rendering the whole exercise moot. 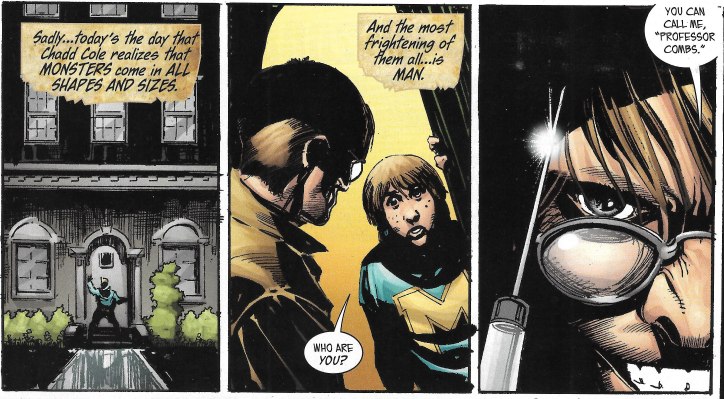 To make matters worse (and spoilers for those of you who like Tom Mandrake's art, which I can kind of understand, and plan on buying the rest of these for the pretty pictures), over the course of the series, Superman promises to save this same boy before he turns into a vampire completely, tries an experimental serum from Man-Bat on him, only to have the boy turn into a vampire anyway, then watches as he leaps out of a skyscraper's window to his doom, except he's a vampire so he'd be okay BUT the sun comes up and kills him as he falls so that Superman can collect his ashes for Jason Blood (he shows up here and the next three issues) to use in a magic ritual that makes all the plot holes disappear and everything be okay AND turns the ashes back to a boy who is still DEAD. And why again? Because.

Because this is awful plotting. It just is. It is meandering and tries to play on emotions it has no idea how to properly setup. It mistakes chaos for excitement and honestly believes name-dropping is the proper way to create an homage. It throws in everything plus the kitchen sink and then hope it works. And it doesn’t.

It's a mess. Avoid these at all costs. (Except for the Tom Mandrake fans, because the art is nice. Just don't read the word balloons.)
Posted by SonOfCthulhu at 7:09 AM