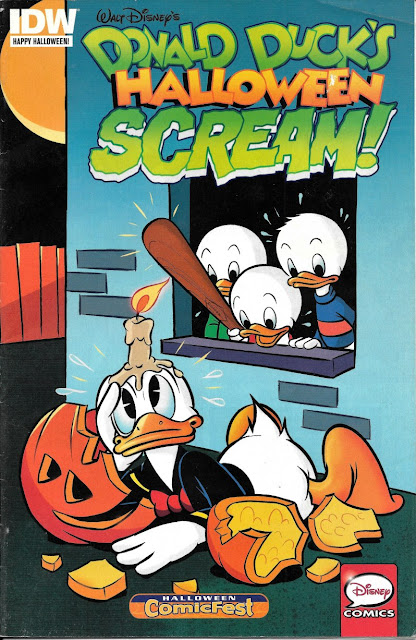 Donald Duck, Disney's jerk. I have rooted for him many times as a child but now the time has come for me to ask both myself and you the audience "Why?"

Why do we root for him?

He isn't the greedy yet kindhearted brother Scrooge McDuck has become through the series of Ducktales adventures (and yes, I still kinda love those even as an adult.)

Donald's always been something of a bastard. He is a cruelhearted narcissist and a horrible Uncle to Hewey, Dewey and Lewey. For examples of this behavior, allow me to present a couple of "on topic" pieces of evidence:

And as Exhibit Two: this issue of Donald Duck's Halloween Scream #1 circa 2015 - it's in the Bag!

We begin our first of the two tales this volume contains early afternoon on All Hallows Eve, the holiday we like to call Halloween. Donald and his nephews begin preparing by going over the boys Halloween outfits. Donald, being a spectacularly horrid person, brags about how much candy he got as a child and how little the boys could bring home in such small baskets. 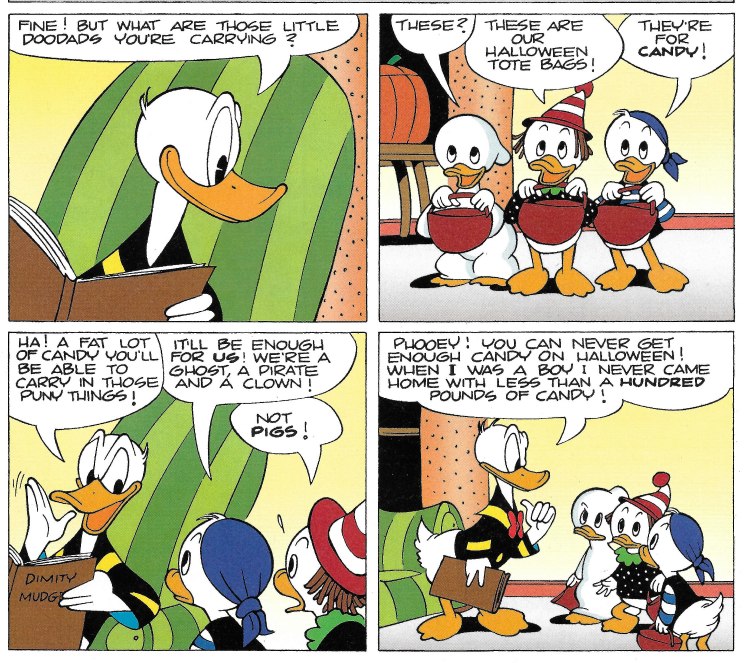 He is so incessant with all his boasts that the boys feel sorely pressed to put him in his place. Thus a wager is struck: 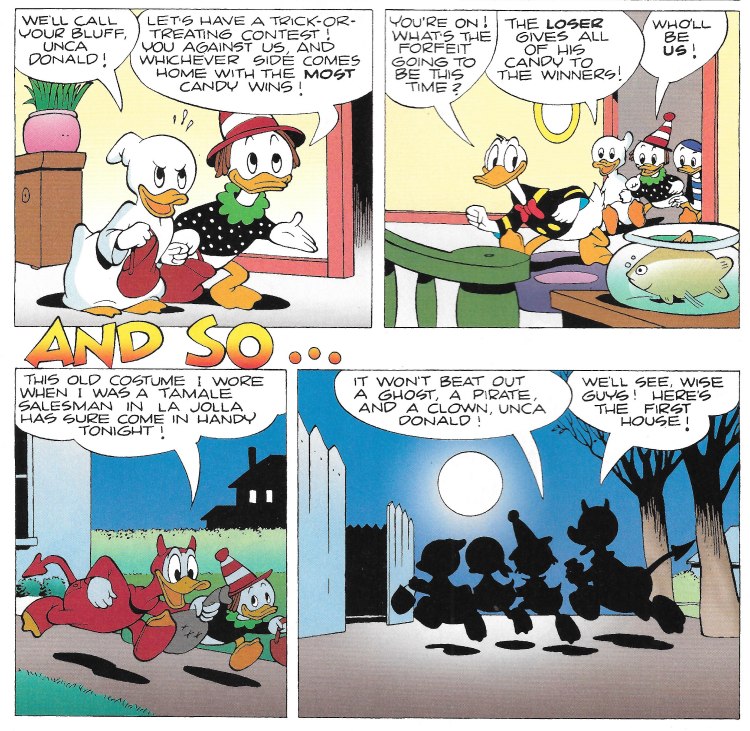 And out into the night they scurry. The boys do fine. Donald, however is met with the typical amount of skepticism. 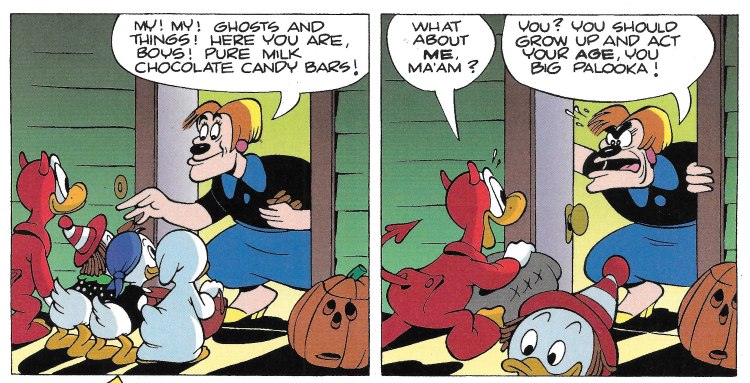 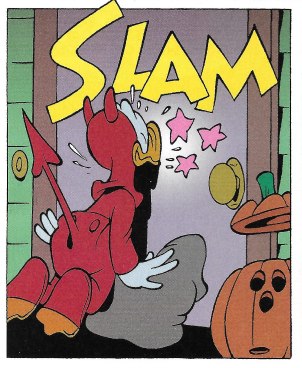 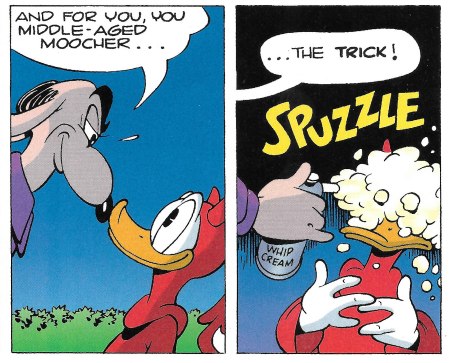 …and time again. Which is to be expected since he is rather ripe to be doing something that is commonly engaged in only by youngsters.

Donald begins to feel discouraged. Which isn't a good thing, as the adult duck is never one to lose gracefully. In fact, he typically will engage in tactics that are most unscrupulous. And this Halloween contest is no different. 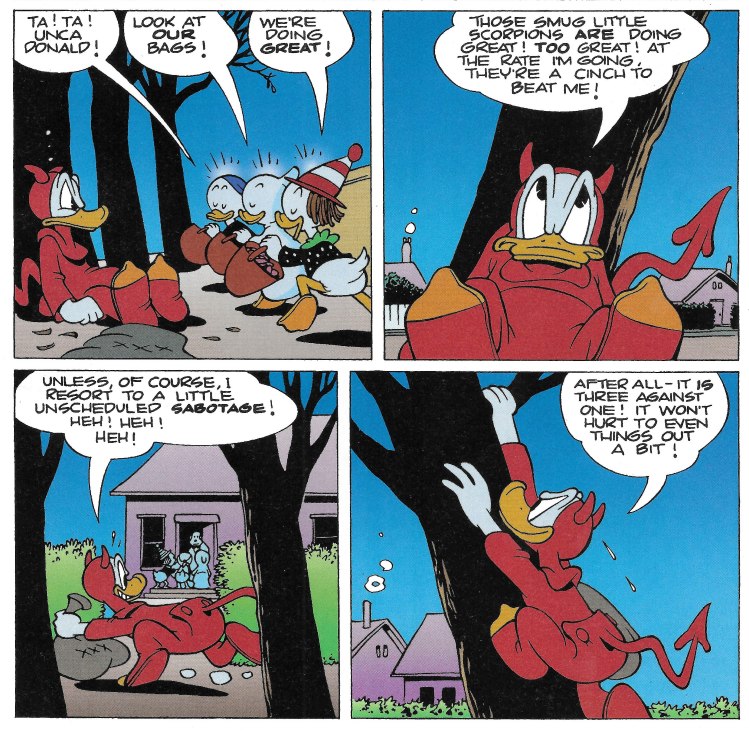 He tries stealing the boy's candy, doing so in such a manner that they actually see him purloining it. 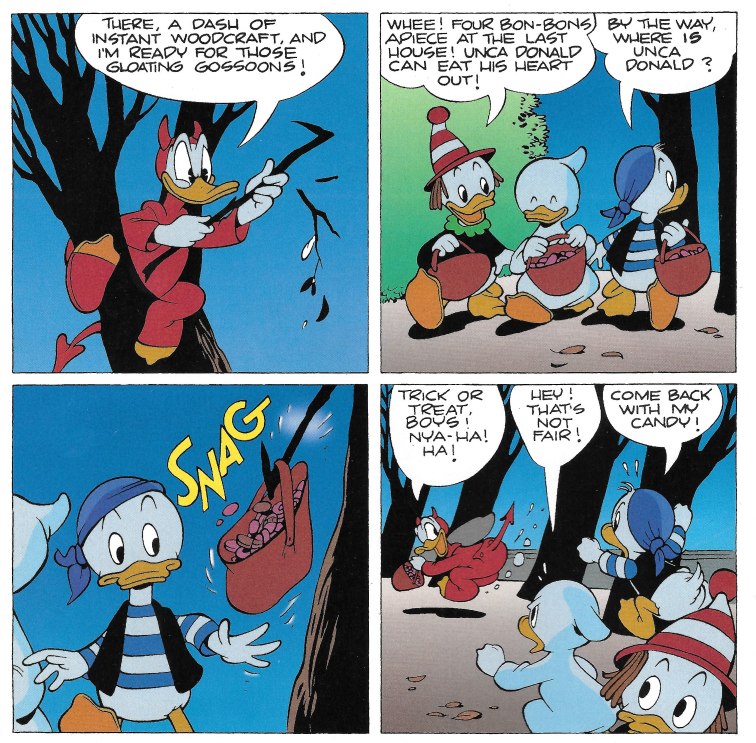 Because at this point in the story there is still some karmic sense of justice in the universe, Donald runs smack-dab into a huge crowd of kids and is bowled over allowing Hewey, Dewey and Lewey to snatch their basket back from him.

Having lost the ill-gotten gains does not deter our deplorable duck. He then decides to hit all the rich houses in the neighborhood to gain a bigger haul. Donald starts with a mansion where he bumps into this fellow wearing a VERY realistic costume.

Yup, that's a real crook and that sack is filled with valuable heirloom jewels. They are quickly surrounded by police who start asking questions. Very uncomfortable questions for one of the pair. When the jewels are discovered, the crook decides to beat feet with them. Only he grabs Donald's Devil tail by mistake. 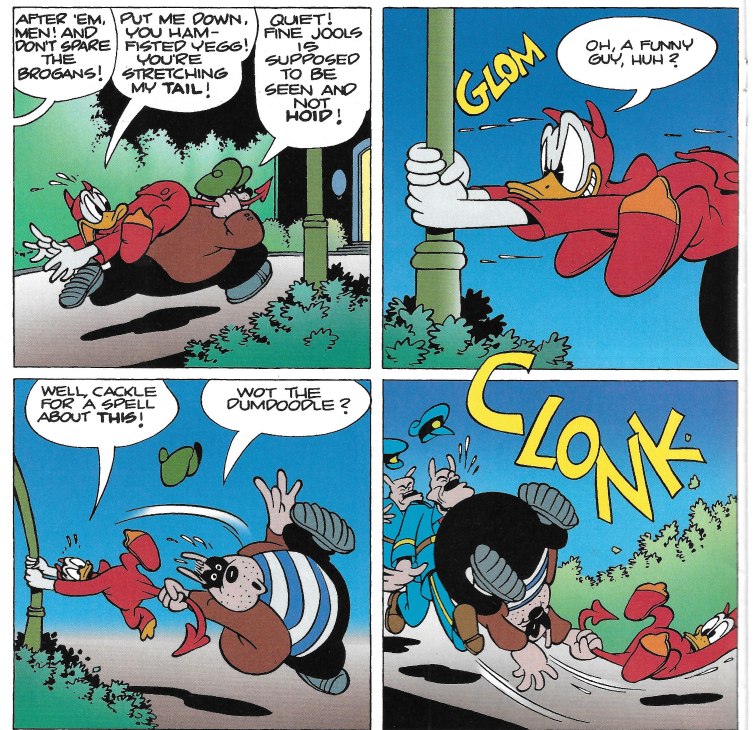 This allows Donald to be the hero and stop the thief from getting away as the canine-like criminal ends up at the bottom of the ensuing dog-pile. Ha-ha, "dog" pile.

The owner of the jewels is none other than Duckburg's most successful Chocolater, J. Fudgegrip Treacle who rewards Donald with his heart's desire. Donald chooses to forgo things like money or a new house or car and instead ops for this: Think about this for a minute. You have a professed billionaire telling you that he is so in your debt for saving his "family jewels" that he will give you ANYTHING you wish for and what is your response? It isn't asking for something that could provide for your material wishes from now until the end of your days or even something altruistic, like giving money to your favorite charity or cause.

No. Your answer is I want to crush the hopes of three little kids who are near and dear to my heart, have never wronged me, and treat me like a surrogate father figure. I want to win a bet I placed with them in such a way that they are decimated. And I want to have more candy than an entire subdivision could reasonably consume over the course of a year without every person developing sugar diabetes.

There is a word for someone like this: Dick.

And the boys are crushed but at least get in the final word. Which is sad given that this experience has ruined the idea of fair competition for them and left them both discouraged and with crippling low self-esteem.

It's moments like these that I'm glad Donald is a sailor and away from these lads for large portions of time. That at least gives them their Uncle Scrooge to provide a positive role model.

If two stories aren't enough to prove Donald's dickishness, then allow me to provide the coup d'état.

We open this near where we ended the last one. 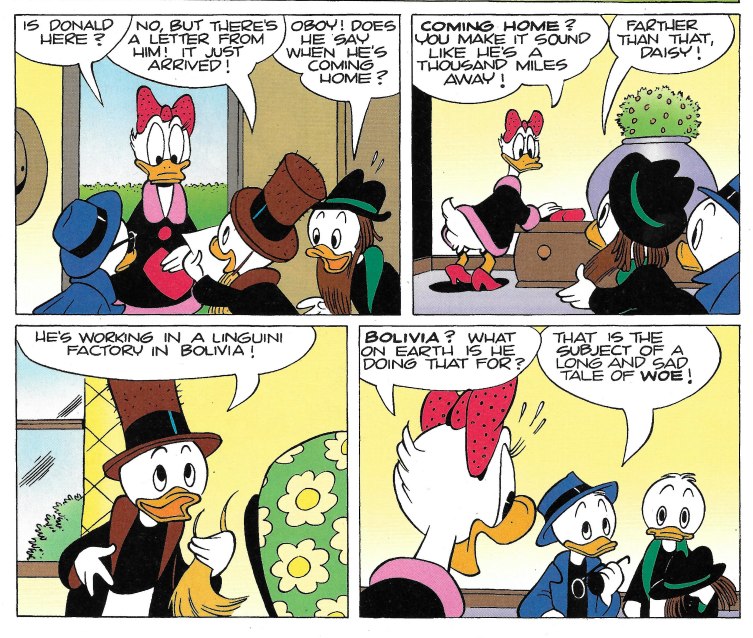 Donald has left his charges alone. That's right: Alone. Not just for an hour or for an afternoon, but alone indefinitely while he has left the country. Now before you say, there might be a good reason for this, believe me there isn't. The fact that he didn't involve his brother or his girlfriend in looking after the youth in his custody is enough to have all those privileges revoked and the kids remanded to the state or his brother. Either of which seem better choices than what he has done.

The why of Donald's leaving is something we should let the boys go into. It's quite a story.

We begin with Donald and the nephews dealing with fall out of the very last story, namely eating 25,000 pounds of chocolate cremes which Donald requested be dumped on his front lawn in order to win a bet with his nephews in the most dickish way possible. 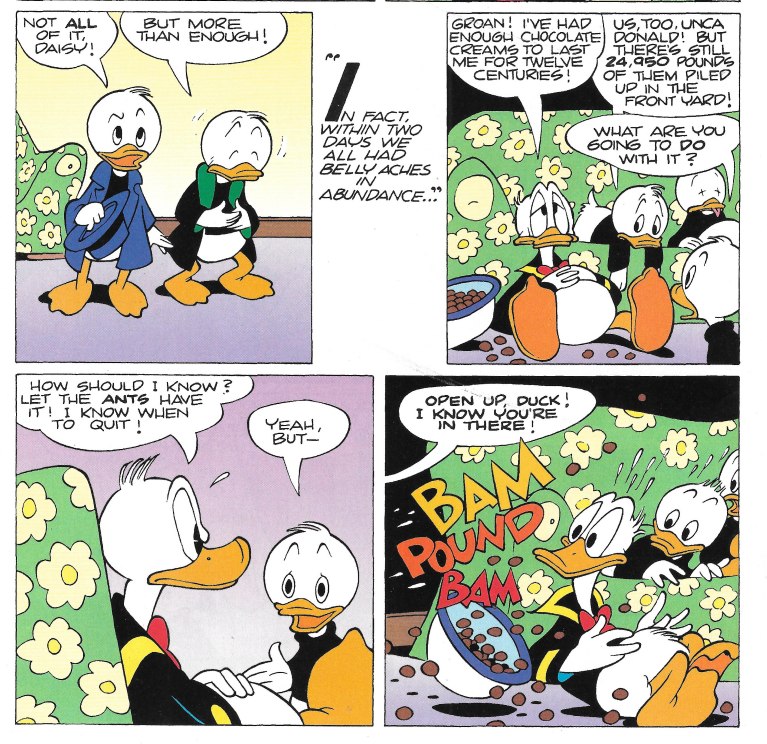 It's too much to eat. And as they soon find out… 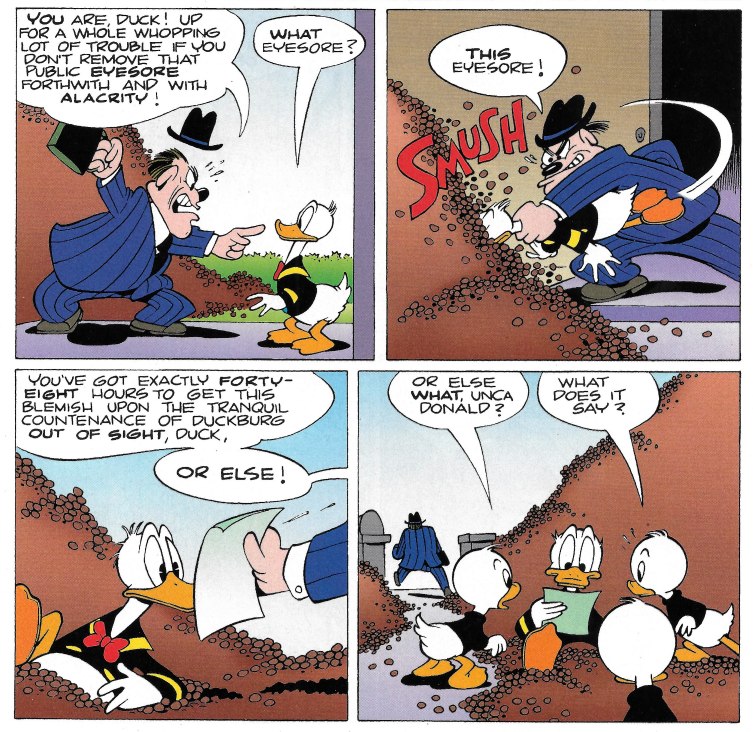 It's also creating a public eyesore. Plus probably a large ant problem.

The letter states if Donald doesn't get rid of it, he will have to pay a thousand dollars. So he tries to give it away… 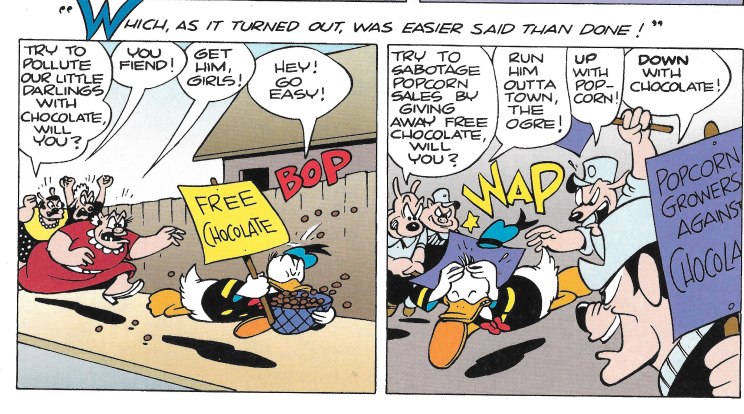 …which fails. So he does the logical thing and hires someone to haul it to the dump. No wait. He DOESN'T do that. Here's what he does… 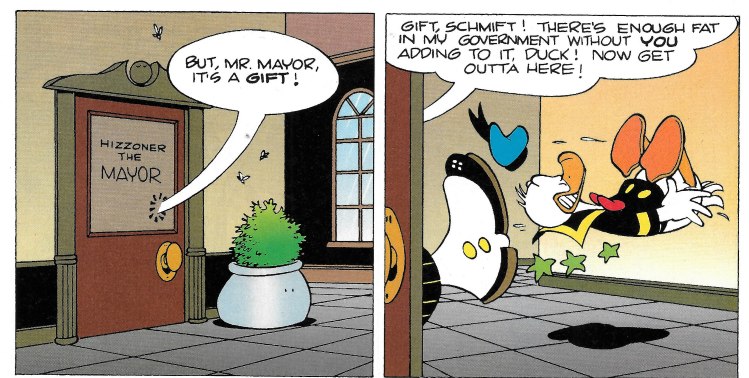 …and please note that the candy at this point has been sitting outside exposed to the elements. Eeew! Just stop Donald! No one wants your rancid dirt, insect and bird poop infested candy! Just hire someone to haul it to the dump.

But no. Gyro Gearloose appears with a new magic machine that should make getting rid of the candy easier: a magic flashlight that levitates things into the air. He shows Donald how it works and gives him a few words of caution. 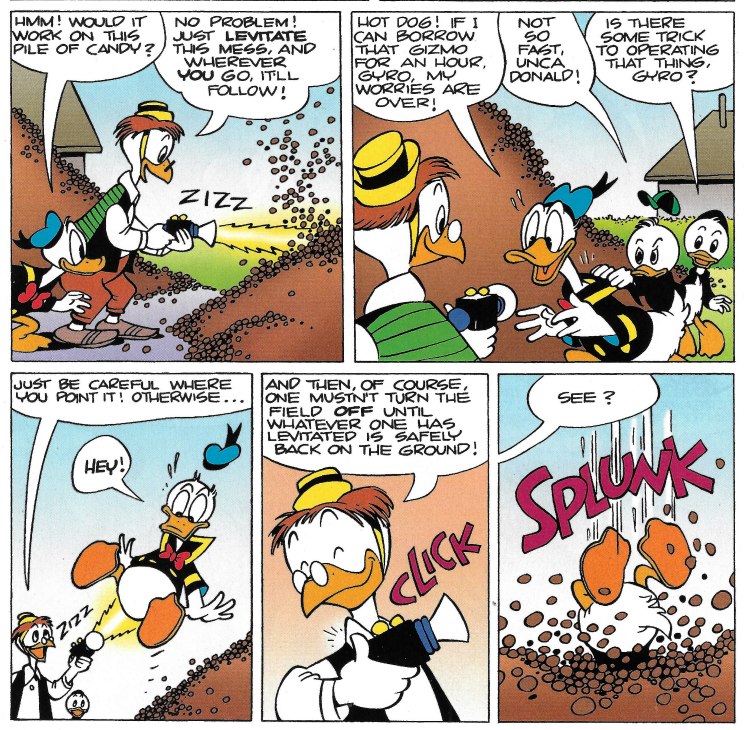 All Donald has to do is move small segments of the pile to the dump and he's good. Except he tries to move the entire pile in one trip…because he is an impatient idiot.

Which of course leads him to causing this: 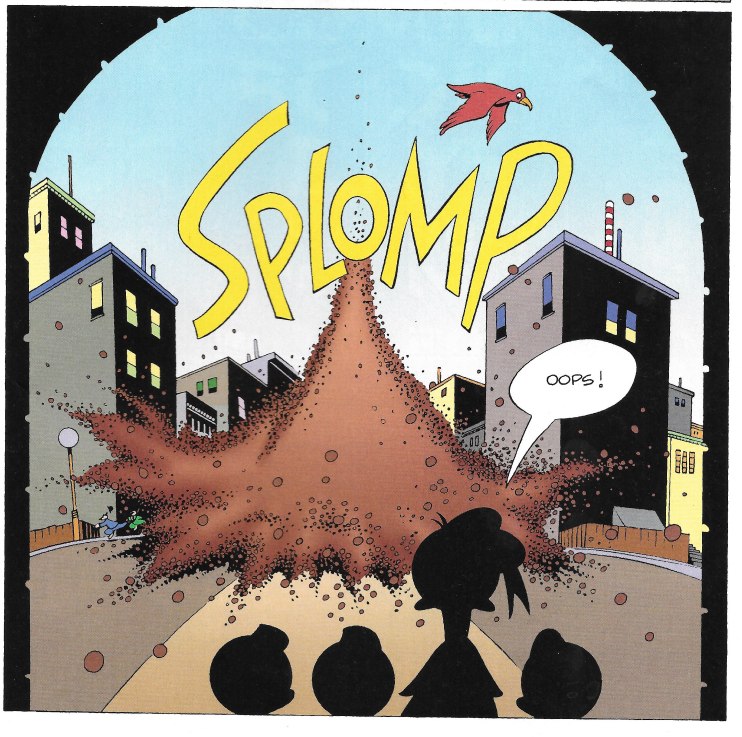 Because that's what you get. The crime of dirtying up Duckburg is compounded by his fleeing justice and child abandonment. I don't know if these books continue stories from non-numbered issues similar to how this one did internally, but one would hope that when Donald gets back he is facing some serious jailtime. 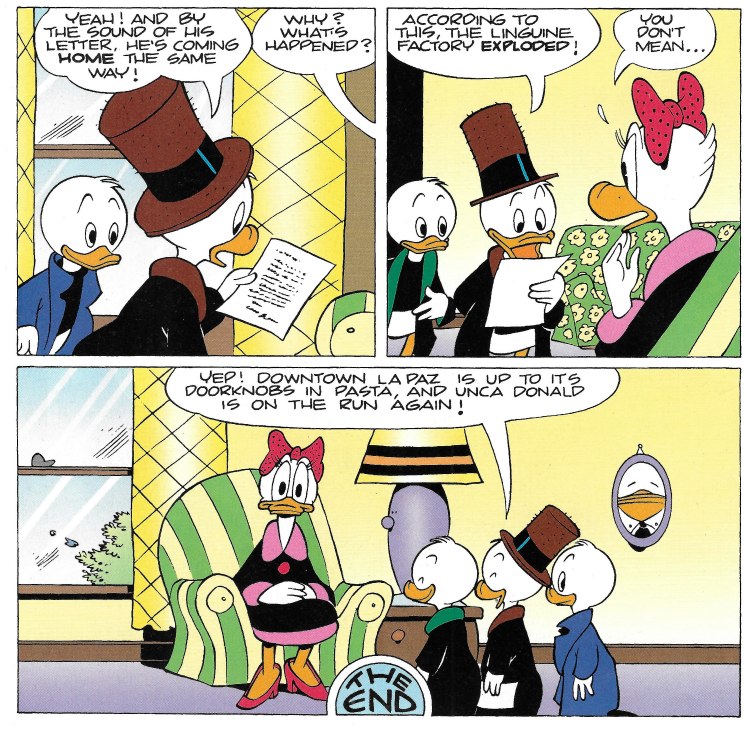 Meanwhile to add to his list of numerous crimes, the kids read about his latest exploits abroad. Hopefully that cell is waiting for him so he can think about the consequences of his actions.
Posted by SonOfCthulhu at 2:19 AM