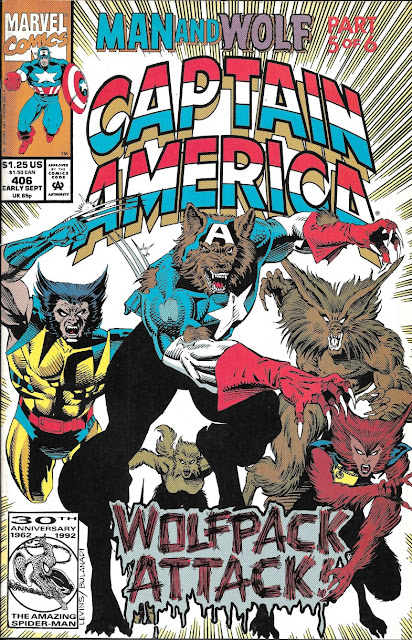 
Okay, ladies and gents! We are back with more CapWolf nonsense. It is not the final issue of this arc, but at part five of six, it is where WE will be jumping off this train-wreck in progress. Let's cut the preamble and jump right in, shall we? 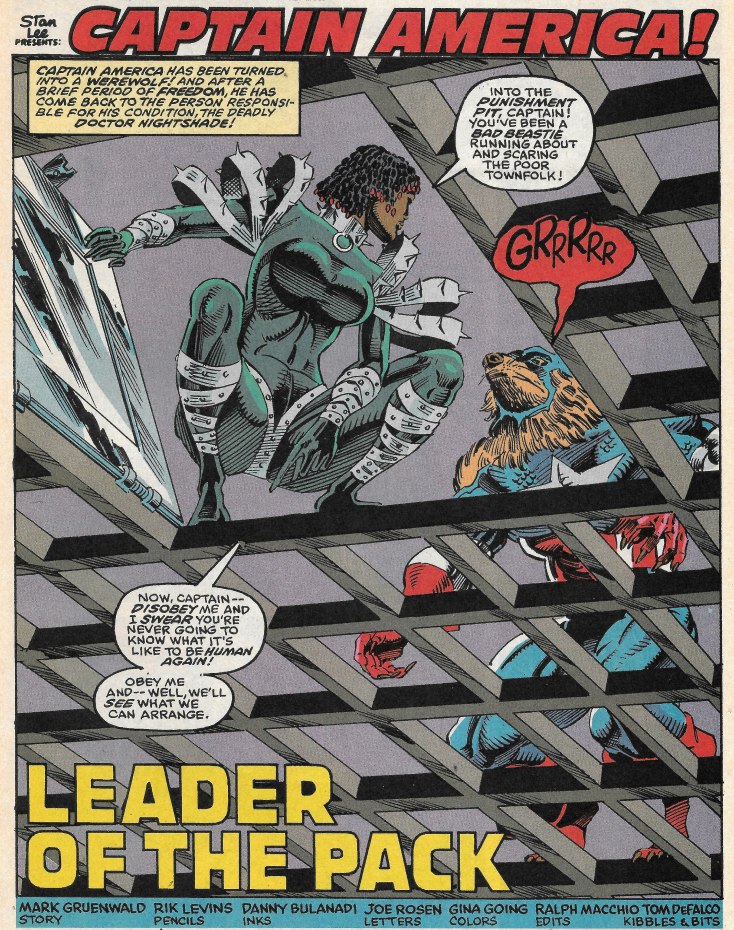 We begin with Dr. Nightshade having soothed CapWolf to the point of getting him into a large cage so he doesn't run away. 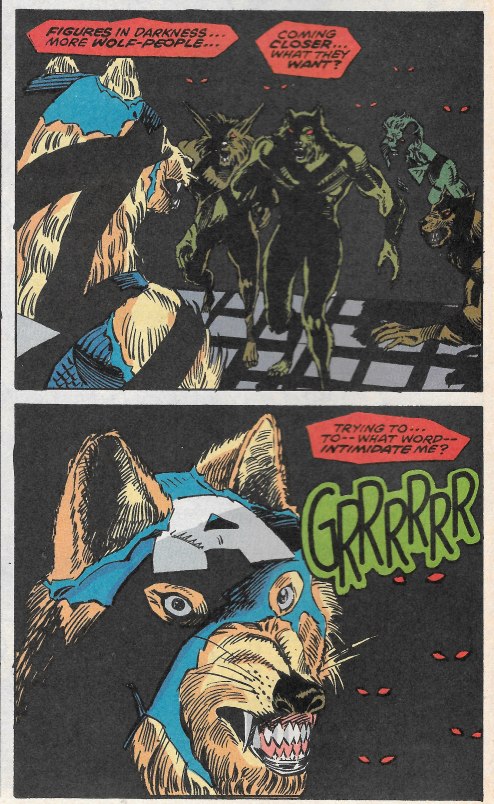 CapWolf soon finds he isn't alone down here too. Note that Rik Levins has already given up in many ways on penciling this mess. Even though this is only page 2, I completely sympathize. The thought of keeping a werewolf figure in goofy tatters of Cap's torn costume is a bit much for anyone to have to draw, especially on a bi-monthly schedule. You take some time off, Rik. I'm not going to fault you for this one little bit, sweetie. 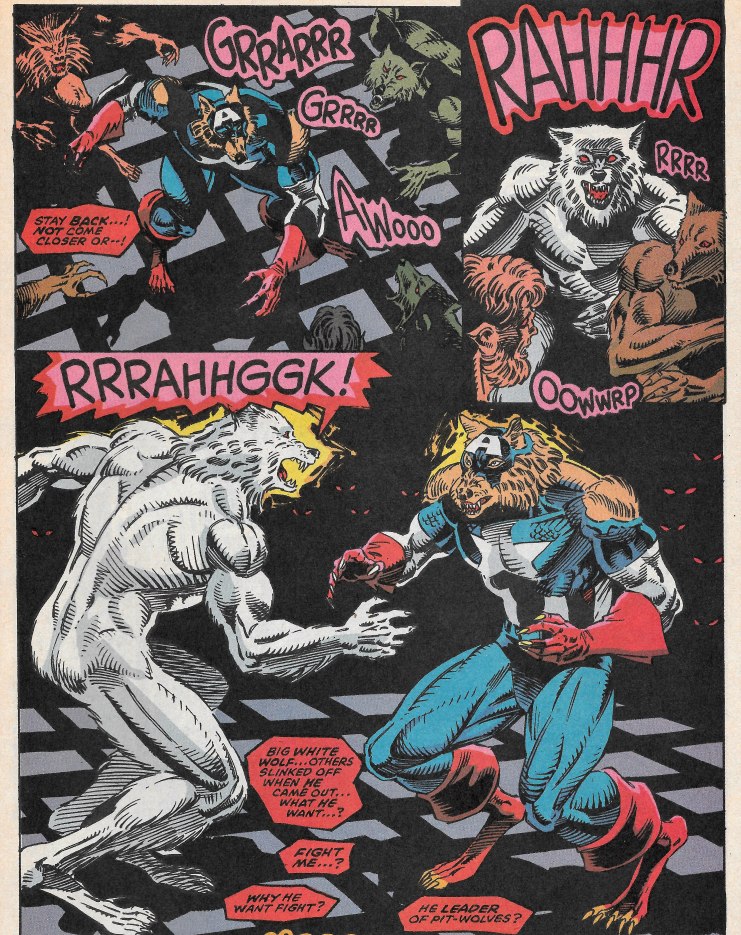 CapWolf doesn't get it so easy though, as he is forced to fight a large white werewolf for the position of Alpha Male. 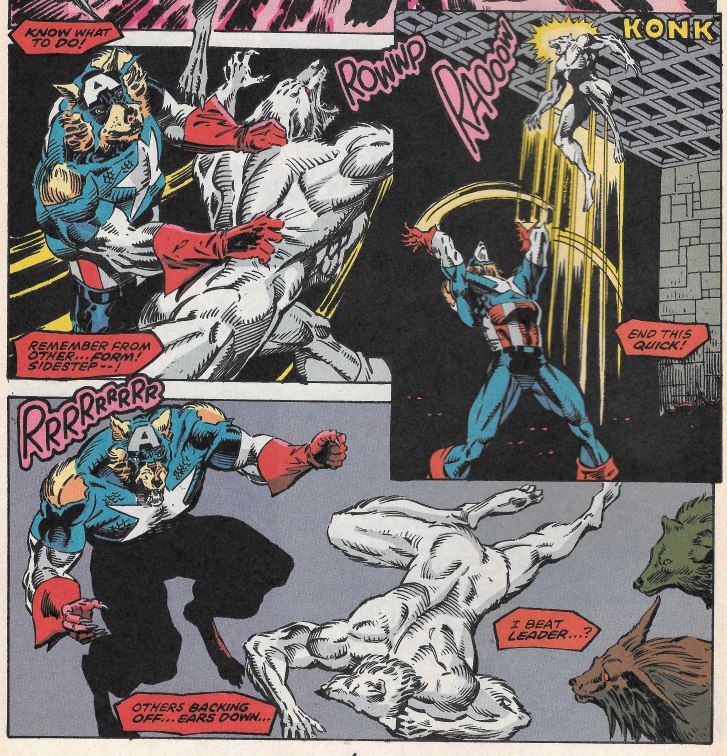 But this IS Captain America we are talking about here, even if he is in werewolf form. He tosses him into the bars, knocking him out and takes over. 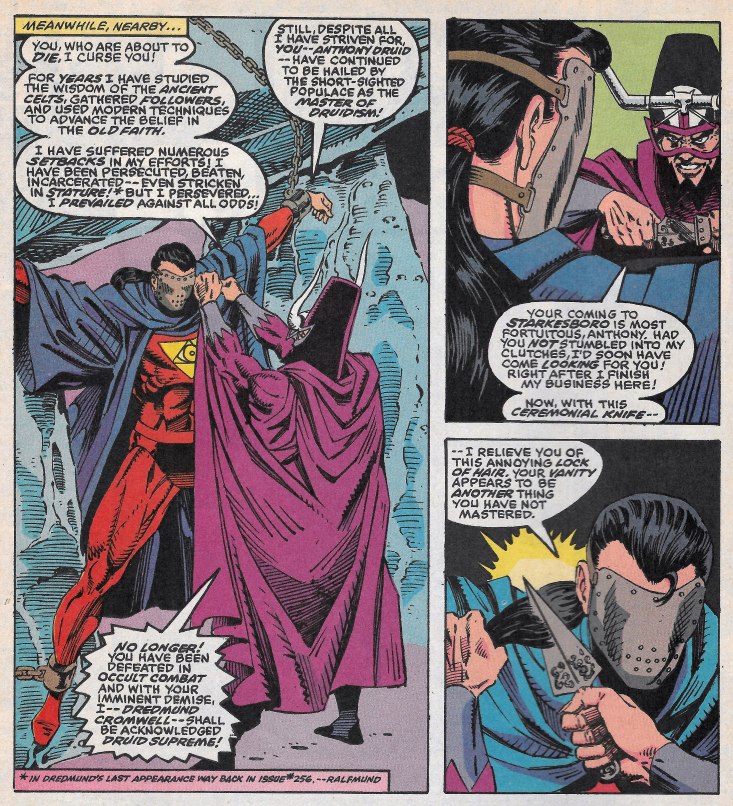 At the same time Dredmund decides to give Dr. Druid a haircut. He's had the good doc hanging around since last issue and has apparently bolted a metal plate to his face. It's all in preparation for using him in a ritual sacrifice, which if Marvel had been smart, they would have totally let happen. Instead he must get rescued somewhere next issue.


Now that CapWolf has triumphed, a familiar face breaks from the pack. 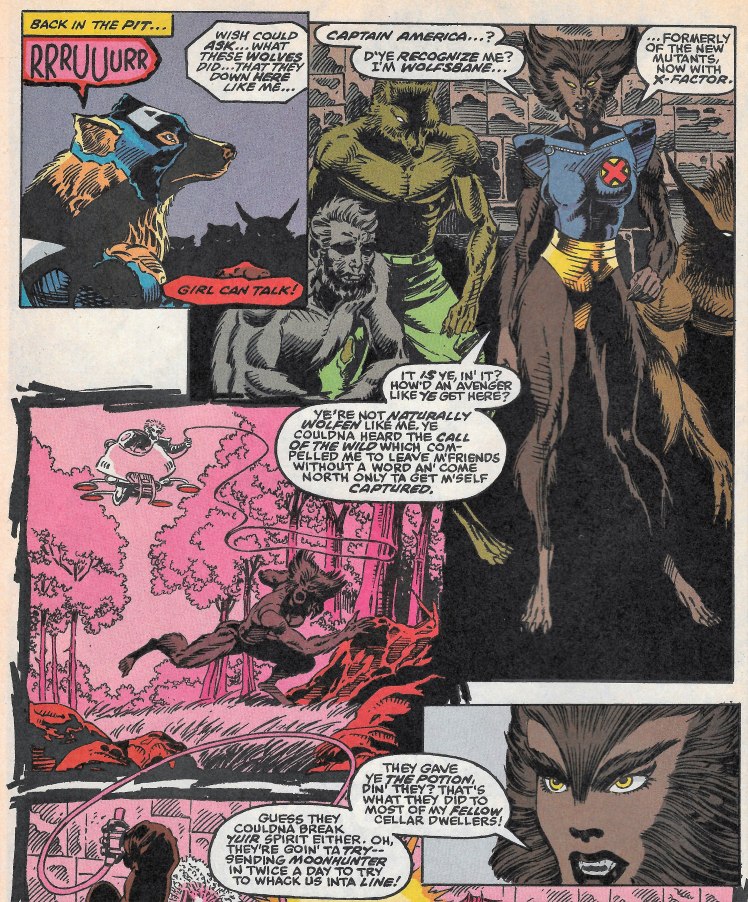 Yup, that's Rahne Sinclair of New Mutants/X-Force fame. It appears EVERY Marvel werewolf is in this mag, as we know Cap originally came here looking for John Jameson, the Man-Wolf. I wonder who else will show up? 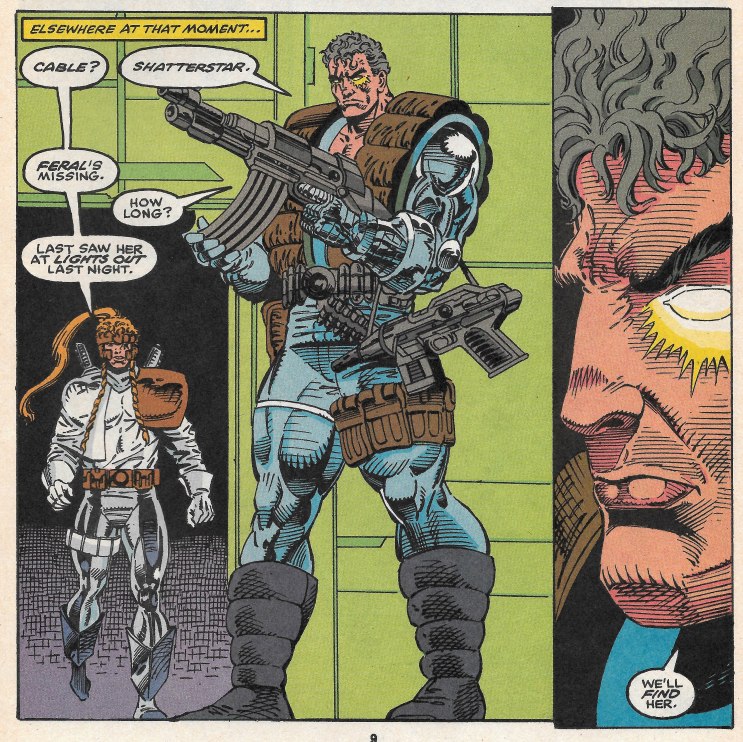 
They won't get there before tomorrow though. Right now however, CapWolf has the desire to escape and is now leading a pack of werewolves. What I'm saying is, hold on to your socks because things are about to get amazingly silly. 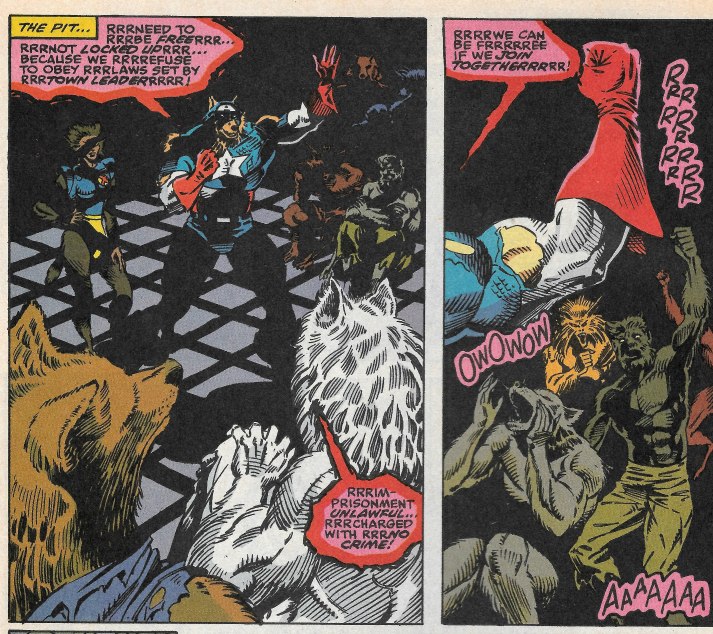 First up, CapWolf has started to talk, which sounds incredibly ridiculous. Every first syllable is some form of "rrr" and any ending "r" sound is exaggerated. Somehow when reading this I don't hear werewolf so much as I hear 'drunk pirate'.


CapWolf is just as popular with werewolves as Captain America is with people, so he convinces all of these furries to…to…to…Well, you're going to have to see it with your own eyes. 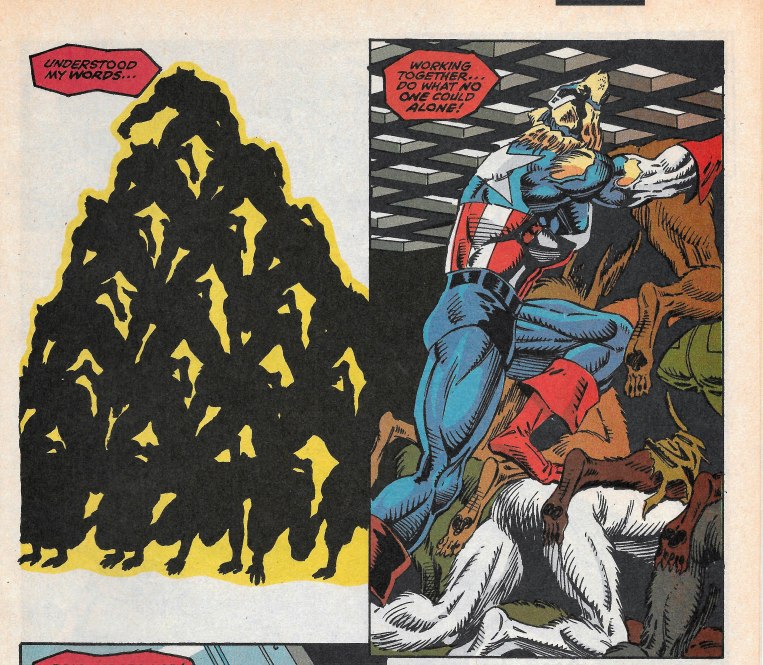 No one told me that werewolves are like trained cheerleaders. Next thing you know CapWolf is up to the gate and breaking the lock. For their final trick, CapWolf gets them to all roll over and play dead. 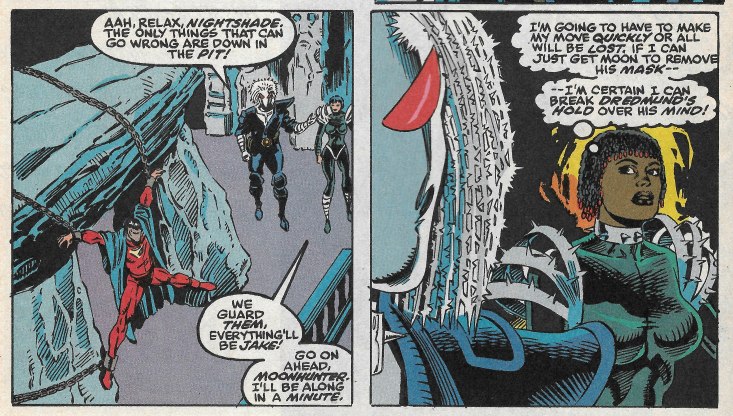 As CapWolf releases his new followers, we turn to Dredmund. He has something diaboloical in store for Dr. Worthless (*er, Druid. He only seems worthless). Also it appears Moonhunter is under Dredmund's control and Dr. Nightshade wants to break that hypnotic spell. Could she be working at some kind of cross purpose here?


CapWolf frees the rest of the werewolves and they are sneaking through the old abandoned manor when all of a sudden…Wait! Why is it that I am reminded of an old Scooby Doo cartoon? Is it because CapWolf sounds like Scooby? Maybe. 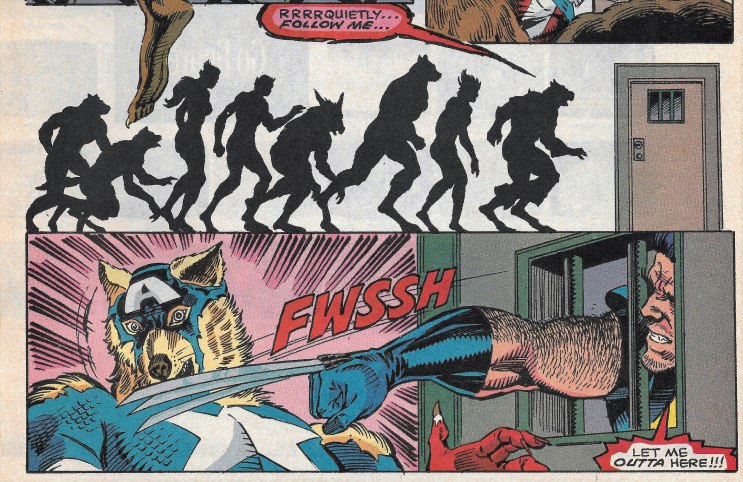 Either way they find Wolverine, who is being held captive by his lack of trying to break free. Those are admantium claws there, Mark Gruenwald. They could easily cut right through those bars. Or that door. Or your plot contrivances. 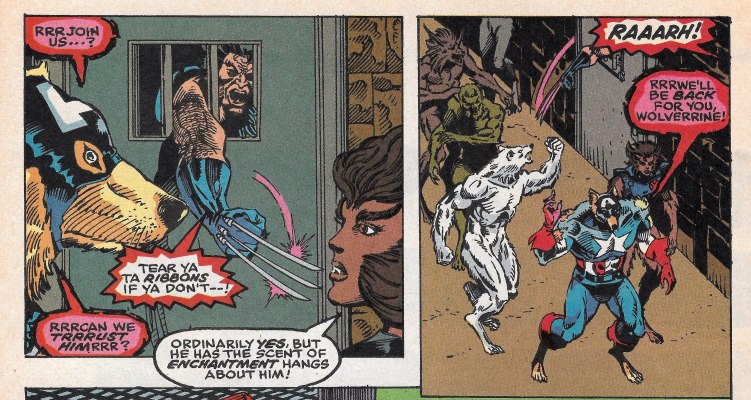 Would Wolvesbane leave her X-Man mentor and teammate locked up? I mean really? That isn't logical. But no. "He smells magically delicious so we should leave him." 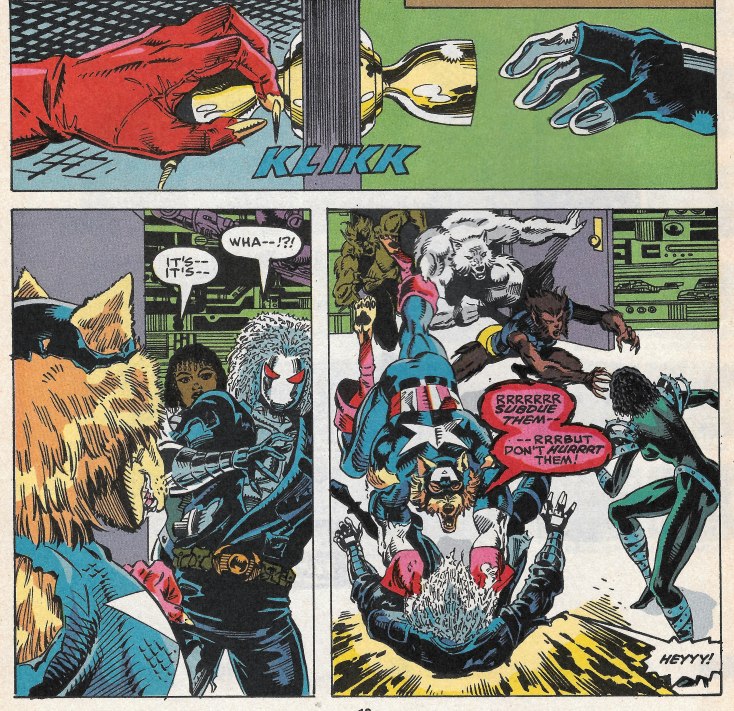 As they troop on, the Cap-Pack encounter Moonhunter and Dr. Nightshade, who they take down with little effort, despite Dr. Nightshade's dog whisperer powers. 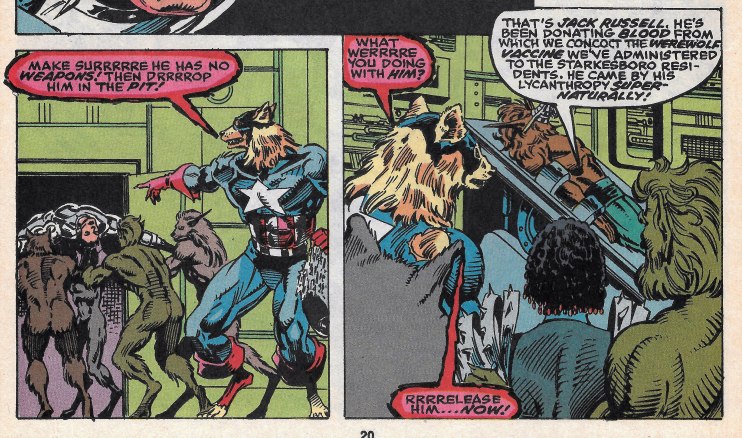 Since Nightshade is fond of Moonhunter, CapWolf soon has her helping them escape by holding the chap hostage. They also make another startling discovery, that's Jack Russell, Marvel's own Werewolf by Night. Seems he's the petri dish that Nightshade has been using to create her "Werewolf Vaccine" she's been using on the townspeople. Note that the word vaccine usually means the exact opposite of the way she is using it here.


And while CapWolf bolsters his side of the werewolf ranks, we turn now to Dredmund, starring in the off-Broadway review of CATS. Well, given the audience, that would be a safe bet here. 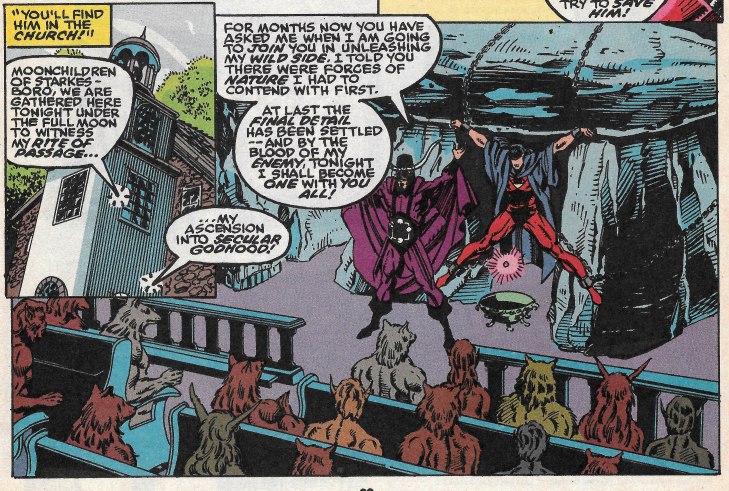 While CapWolf's forces bust in, they have a hard time making it to the stage before Dredmund can do THIS… 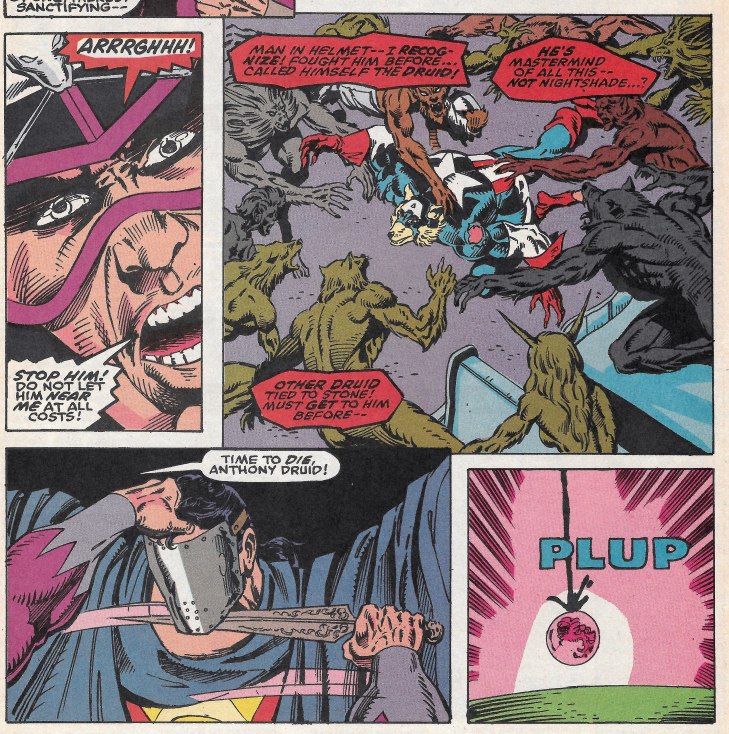 Wait! Dr. Druid's last name is ACTUALLY Druid? He literally has no secret identity. And yes this is exactly like Dr. Strange, again showing what a poor knock-off of that character he is.


But it's not all GOOD news here folks, (because, let's all admit that a dead Dr. Druid is no big loss.) because now the charged up stone is making rave lighting and doing something sinister to Dredmund/The Druid. 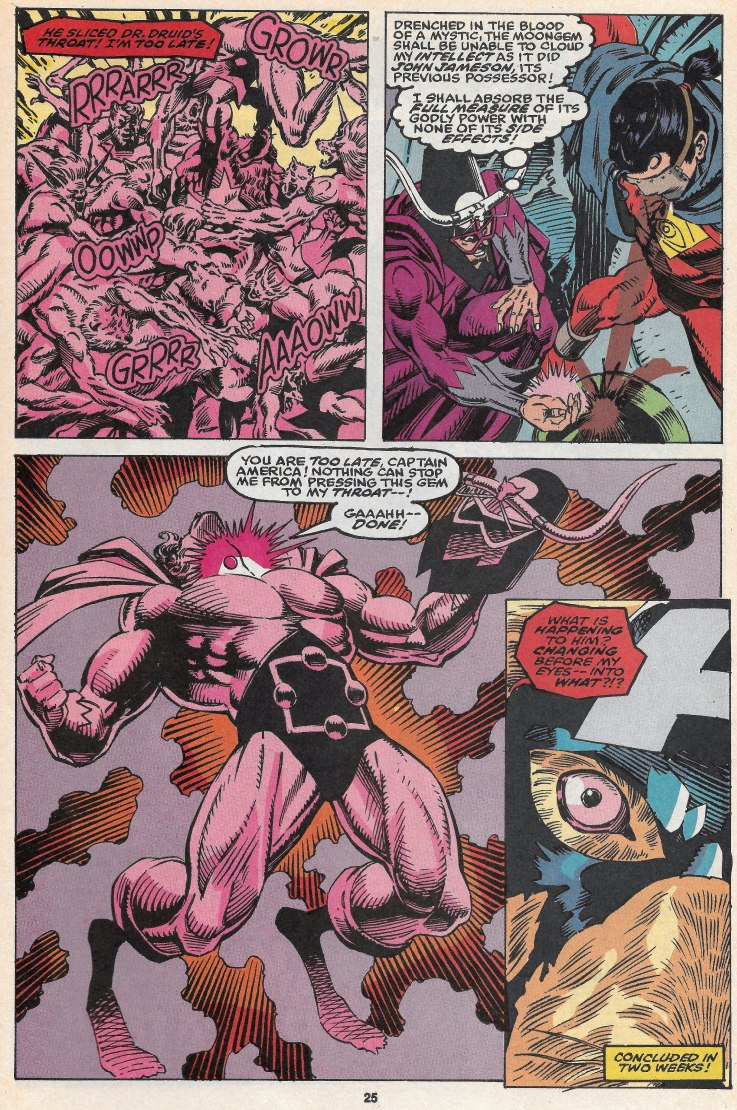 Whatever that is, you'd have to find out next issue. And I say "you'd" because this was the end for me. I'm out. I searched for these at a local comic convention's $1 back issue boxes, but this is too much even for my Crapbox dulled senses.


I hope they find a way to turn Cap back. Who am I kidding? Comics bring people back from the DEAD. A little lycanthropy is a walk in the park. Until next time this title goes to the dogs I'm out. But I will remember to bring a pooper scooper next outing. Promise.