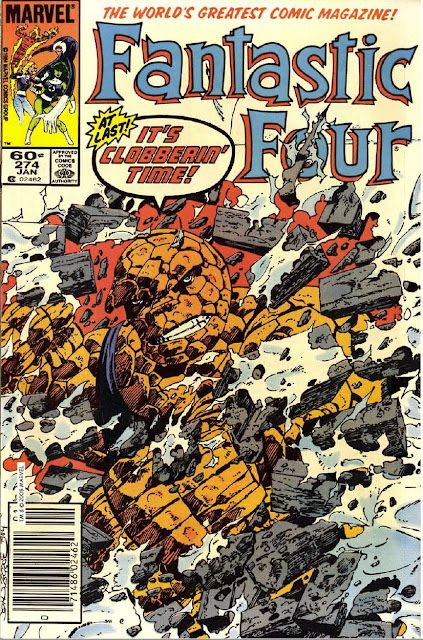 Part II of classic monsters vs the Thing showdown

There's a lot to cover here in this issue from Fantastic Four #274, and I am going to apologize up front for the parts that have absolutely NOTHING to do with Halloween or monsters.

It's just too hard to pass by throwing out my two cents on this part of John Byrne's fantastic run. That word came to mind without me thinking of the title of this book, which just goes to prove how powerful his stories really were. I miss these tales. Walt Simonson had a grand run on the book after, but little else comes to mind as runs that were this good using these characters since Byrne got a hold of them. I've read it off and on from the Crapbox and there have been some people who just didn't understand what to do with them.

But here we have Byrne's FF take. And it is so very good!

We begin with this involved story that has gotten so heavy. Reed and Sue are on part-time hiatus, owing to Sue miscarrying her second child. It is a hard time for the team as Ben decided to stay behind on the Secret Wars planet instead of returning. We have newcomer Jennifer Walters on hand as the powerhouse of the group, and she fits in wonderfully as muscle and as a new part of this "family."

We find ourselves in the home of the new civilian identities of Reed and Sue. While a nosy neighbor looks on, Jen transforms to help Sue find her earring, something even Sue admits she could have done herself on the very next page. However, we know Byrne and this is really all just setup for a future conflict. 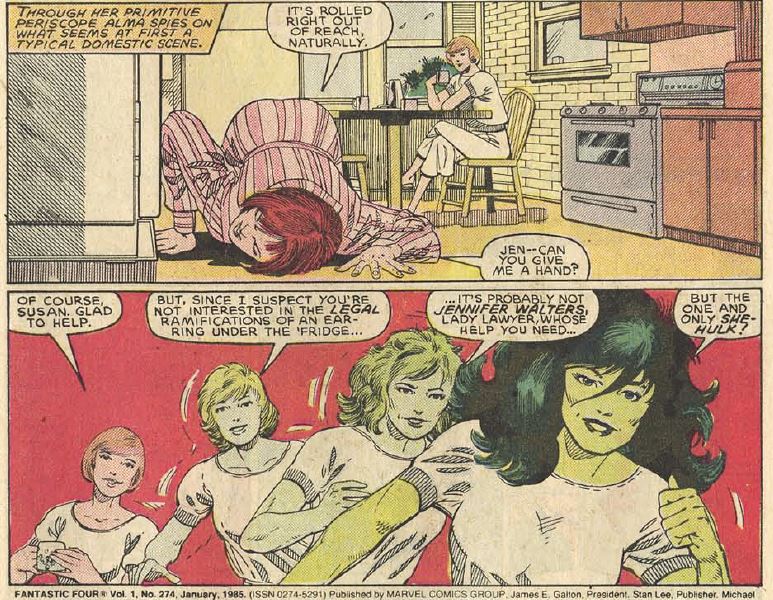 Here is where Byrne excels: he carefully plots everything out far in advance. His storylines are usually pretty dense with stuff that has far reaching consequences.

When he is on top of his game, you get great stuff…stupendous stuff. And here he is very much batting a thousand. Watch as Sue reacts to seeing the room she was preparing for her future child. 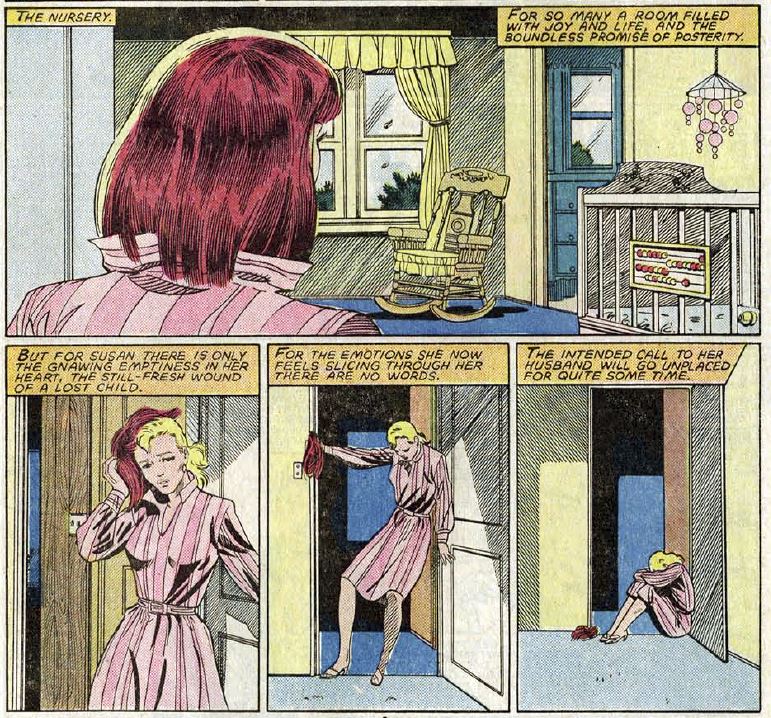 With Sue's very human and relatable collapse, we shift to her husband Reed and his decision to move everyone out of the Baxter Building. Seems no one wants to give up their lease to him, as the new owner, and the FF need more space for his crazy experiments. Seems illogical on the part fo the tenants given the number of menaces that have riddled the occupants of the building that the FF calls home, but whatever. 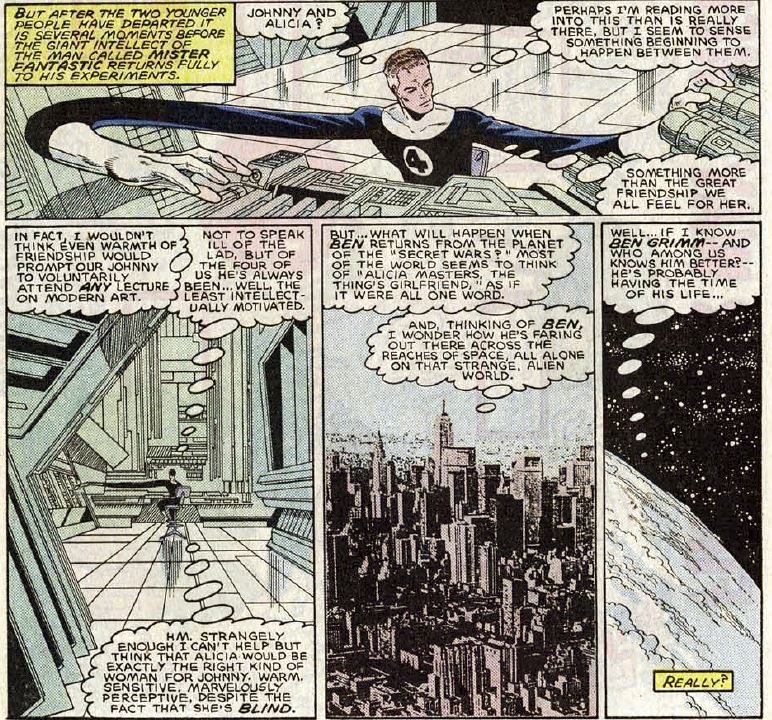 Reed also doesn't fail to notice Johnny falling for Alicia, either. But with a stray thought, Reed wonders what Ben is up to, his friend that is separated by light years of space. Andy in typical Byrne fashion we are whisked across those intervening lengths to arrive at where we left off in The Thing 19, with Ben. And Frankenstein's Monster. 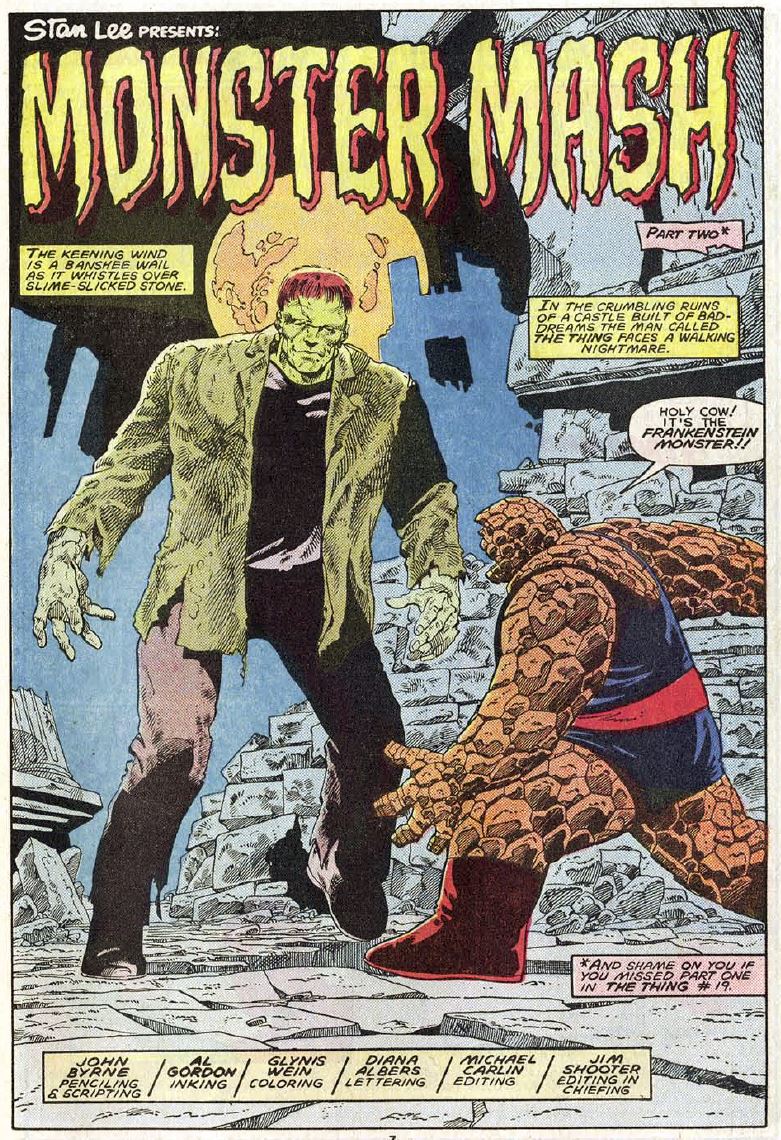 No offense to Ron Wilson, but I really like Byrne's pencils on this monster, more than I like Wilson's. Both are great, mind you, but Byrne has an edge on all things Thing. And if to prove that, off we go with this boxing match. 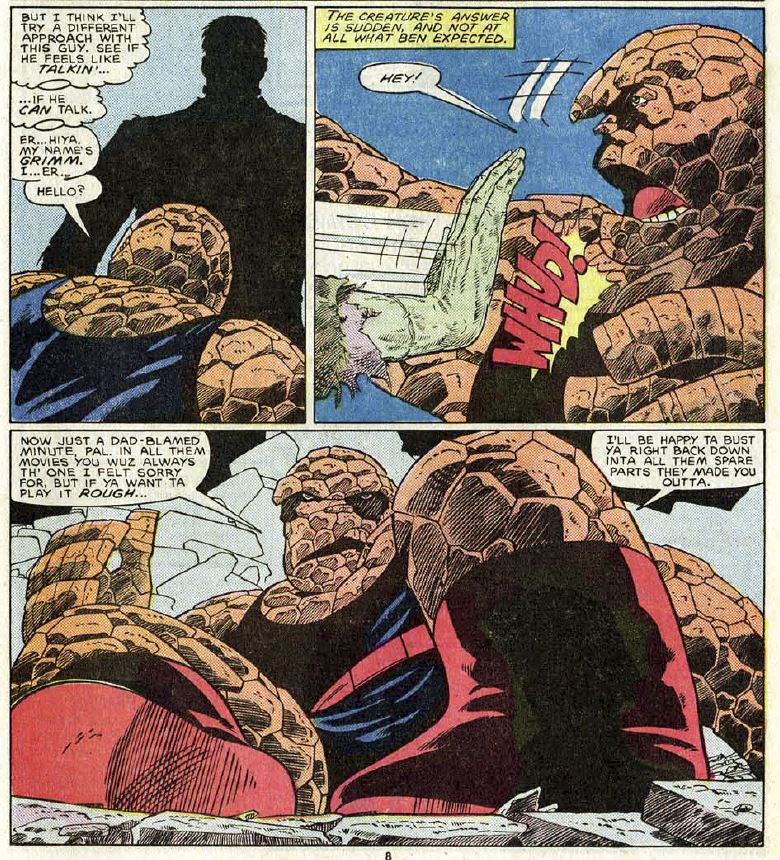 It starts with a gentle shove. And I praise Ben for being so magnanimous as to try and befriend the monster, but let's be honest here: in his timeline he just faced off against a mummy with fricken laserbeams coming out of his eyes. Just punch him, Ben! 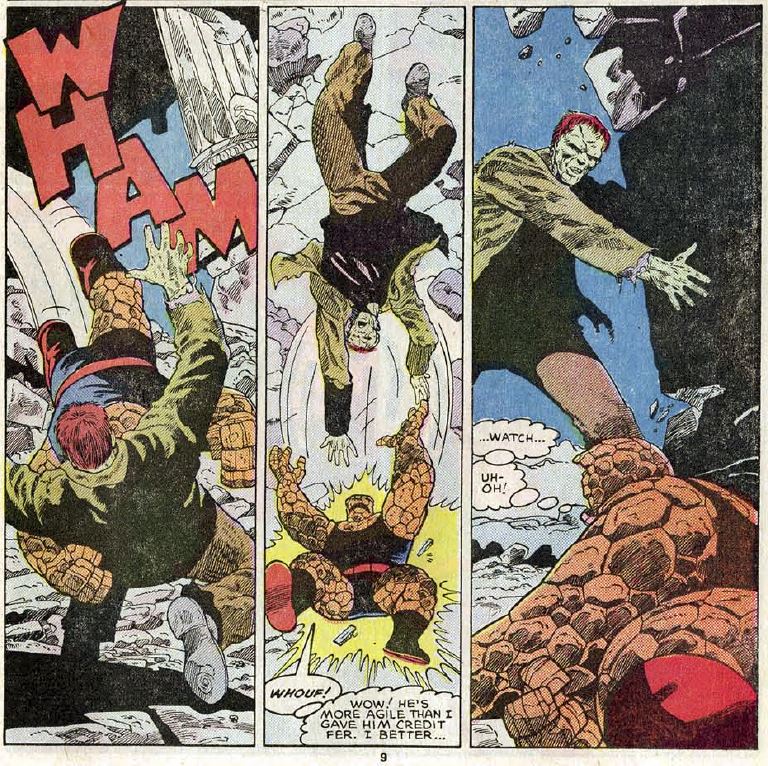 See! That's what you get! Now whachu gonna do about it?

Oh Benji! You are embarrassing Yancy Street here. Show some spine before he gets the drop on you…whoops. Too late it appears. 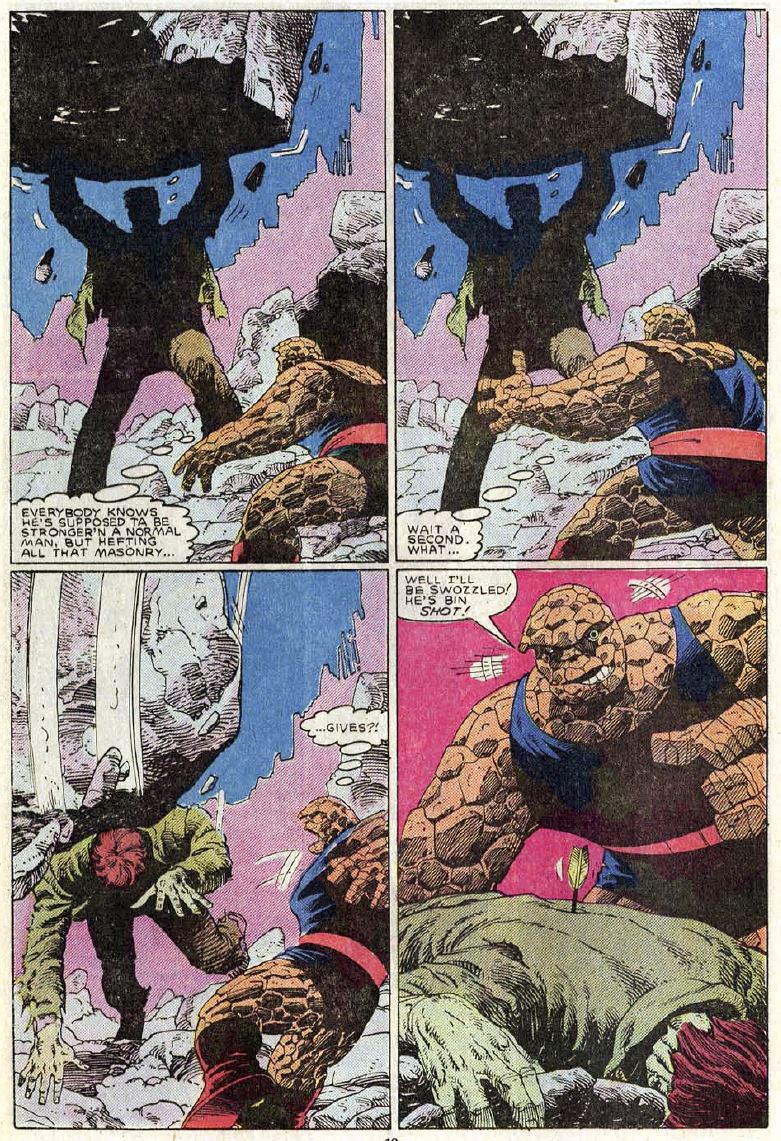 Except it isn't because you've been saved by this guy: 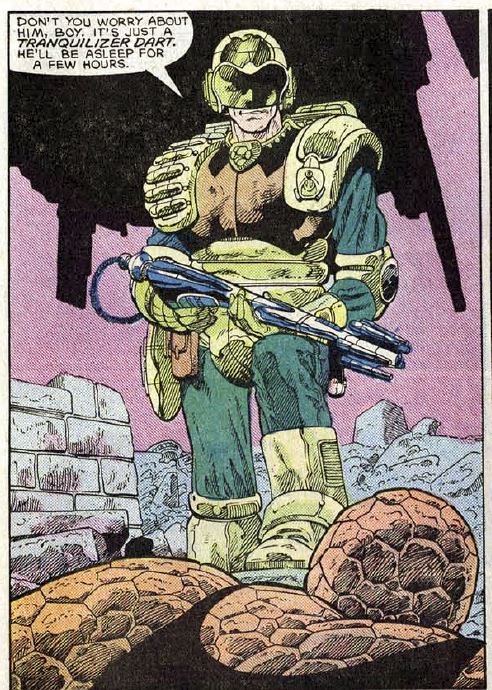 Wait! Why is Judge Dredd in lime green? And what is he doing here? Oh, he's tranq'n everyone. Including the ever lovin' blue eyed Thing. 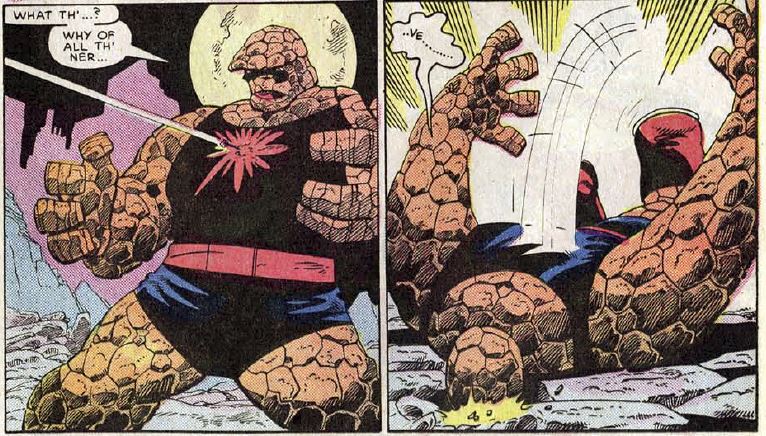 When Ben awakes he's in a wooden version of a police holding van, if said van had been manufactured by the Hobbits from Peter Jackson's Lord of the Rings movies. He's trussed up alongside Frankie and this new fellow who you better bet isn't what he appears to be. 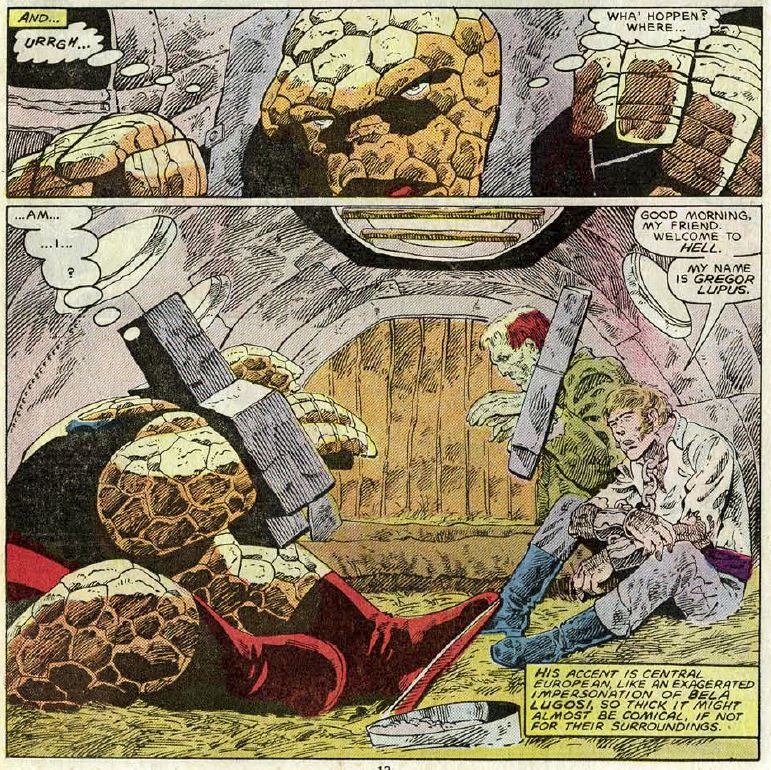 Yup. That pretty much rounds out the top four classic monsters, and you can be sure that Ben's gonna go a few rounds with this guy before the credits roll on this piece. But before we get to that, Ben has to do some escaping. Easy enough, as he transforms back to Ben and slides the now huge restrains off.

Not without his hosts noticing, however. When they stop to investigate, Ben gets a chance to cold-cock lime-Dredd before he gets a shot off. Then he grabs the coachman, who looks a bunch like the love child of the Wicked Witch of the East and the Wizard of Oz. However this fellow has a trick up his sleeve. Or rather in his left eye. 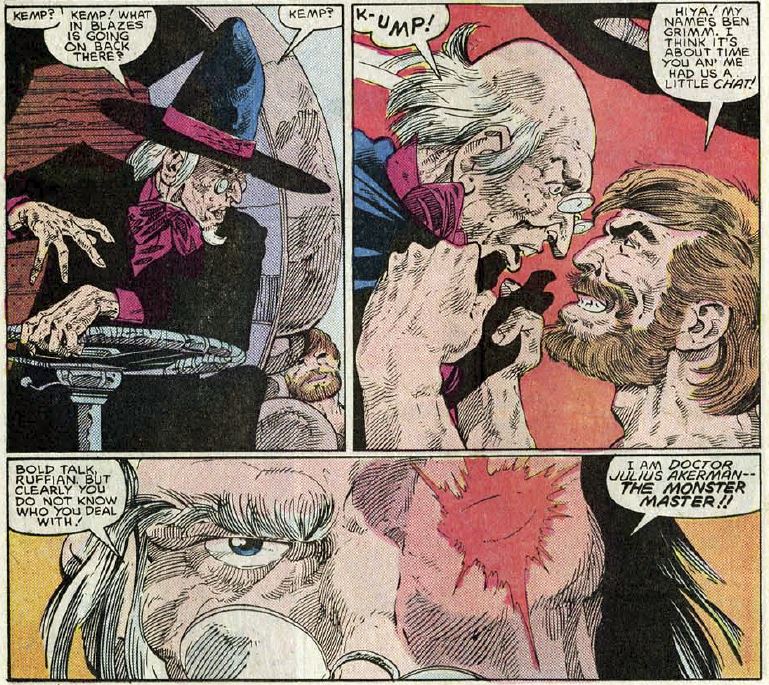 We all know where this is going. That's right: to the dogs.

Ben takes it on the chin again and we get a human on werewolf altercation for a few panels. 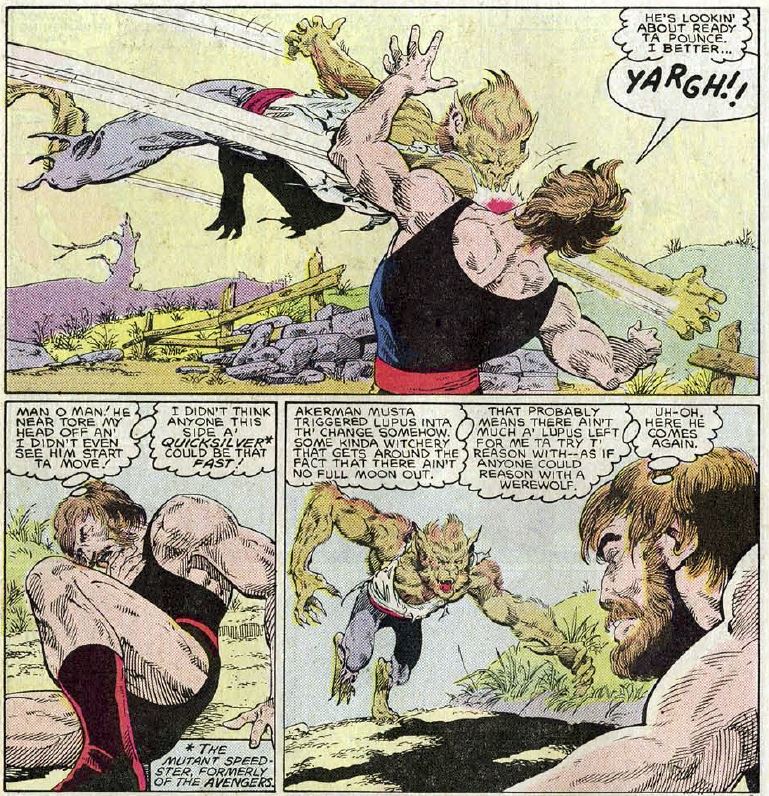 Until Ben starts getting his head handed to him, then… 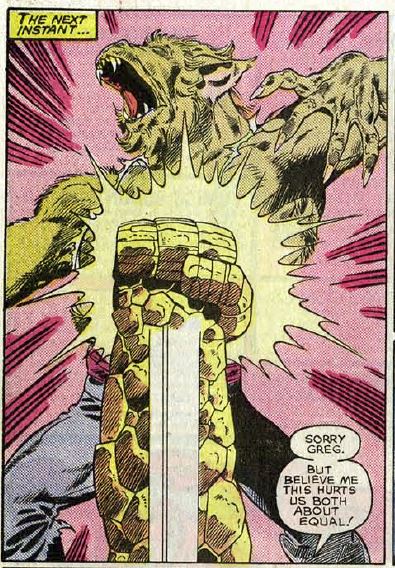 Now we've got ourselves a match folks. Seems like someone's missing…hmm?

I suppose whomever it is that's missing will turn up sooner or…Oh, lord! 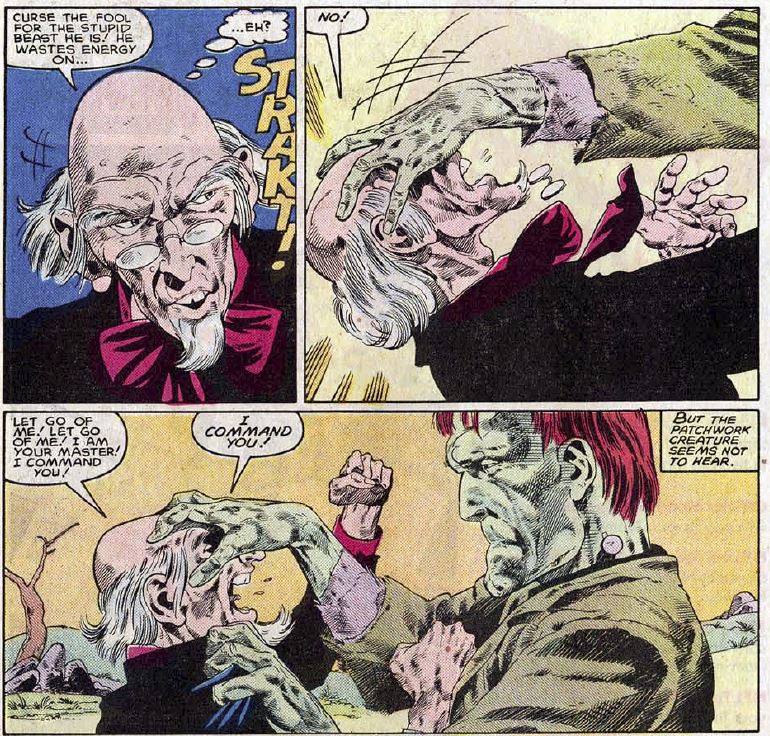 And Frankie snaps the guy's neck. Because that's what you get! I don't know, this is a bit like a Disney movie where in the end the bad guy isn't just tossed off a cliff, but is brutally dismembered instead. Felt a bit…excessive is all I'm saying.

With discount Gandalf gone, Lupus turns back into that Professor of Defense against the Dark Arts from the third Harry Potter movie (someone will correct me and point out the inaccuracy in that remark, I'm sure of it) and the Thing is left to deal with the murderous rampage of Frankie the only way you could. 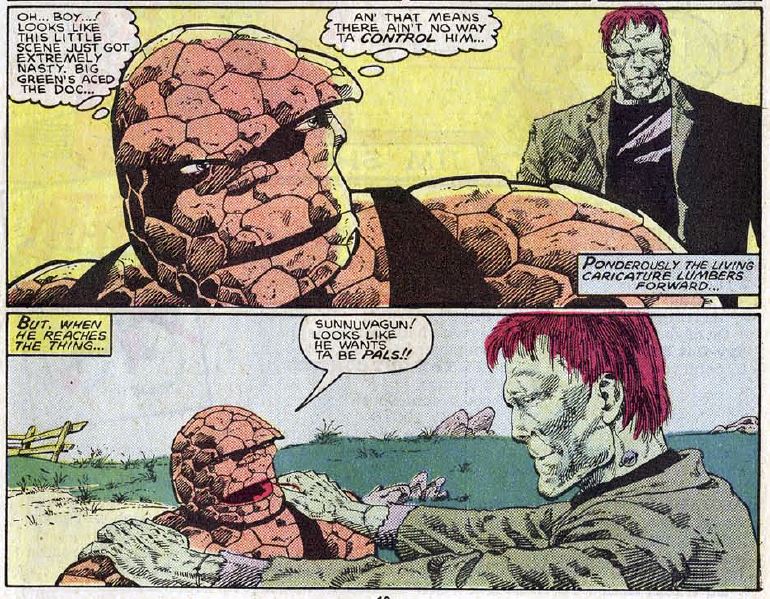 By being his friend? That's a strange shift in tone. I'm kinda lost here guys.

In the end, Frankie and Lupus decide to haul the other bad guy away as Ben declines to go with them. As the end title theme from TV's Incredible Hulk plays them off they vanish into the mist as if they were never there…. 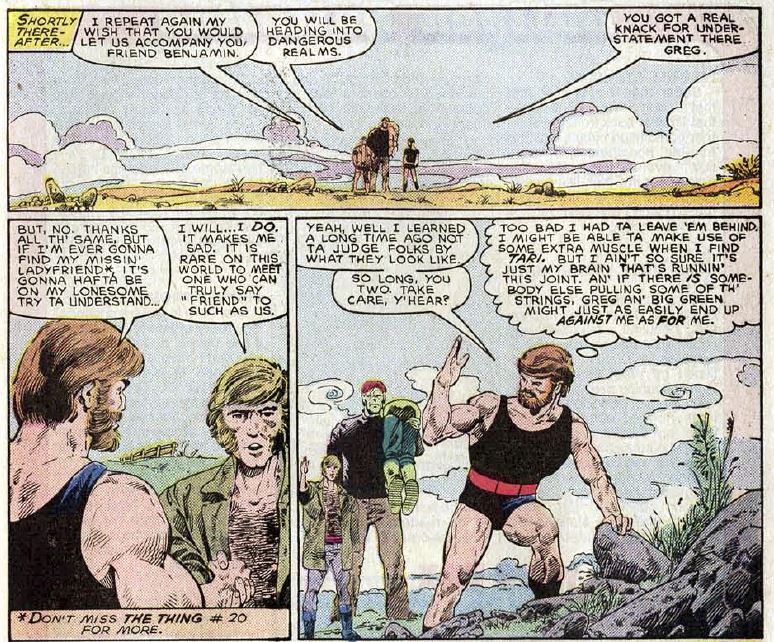 And we switch to the epilogue to this tale, a lead in for the next issue, which is just amazing looking the way Byrne draws it. Here we have a spy probe searching around the Baxter Building, and spying an interesting glob of black gunk in a tube…

…and poking a small hole in the tube to take a sample only to have it spring out! 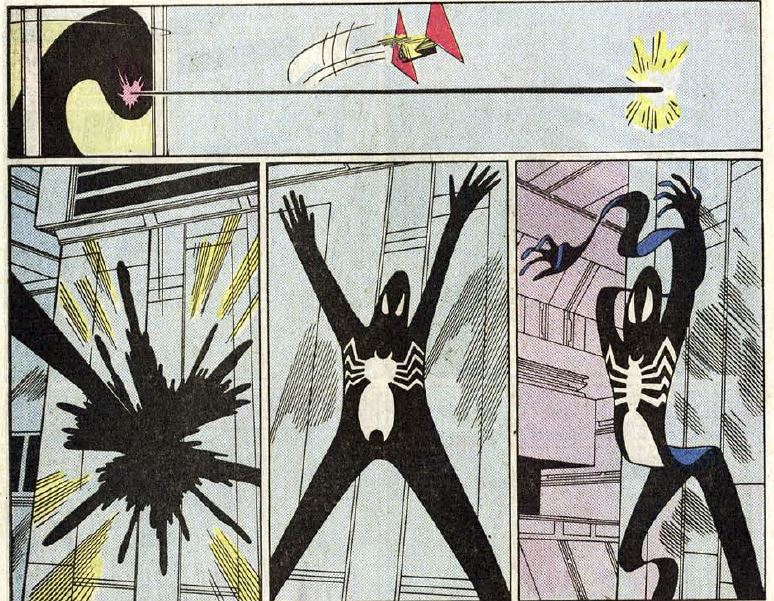 All I have to say here is to paraphrase Archer: Do you want Venoms? Because that, ladies and gentlemen, is how you get Venoms!
Posted by SonOfCthulhu at 4:55 AM