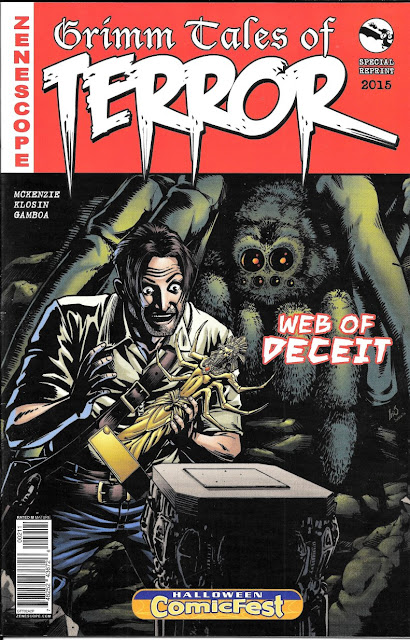 The Grimm's people do a good job of replacing the Cryptkeeper

Zenoscope Entertainment took the hot girls out of the frame for once and ended up with exactly the kind of horror book I like to read.

Enough of a throwback to the classic Creepy or Tales from the Crypt stories (although not exactly an anthology) for me to endorse this. I mean it is a classic, old-school story and a solid wrapper.

Let's begin with that wrapper and see how it unravels. 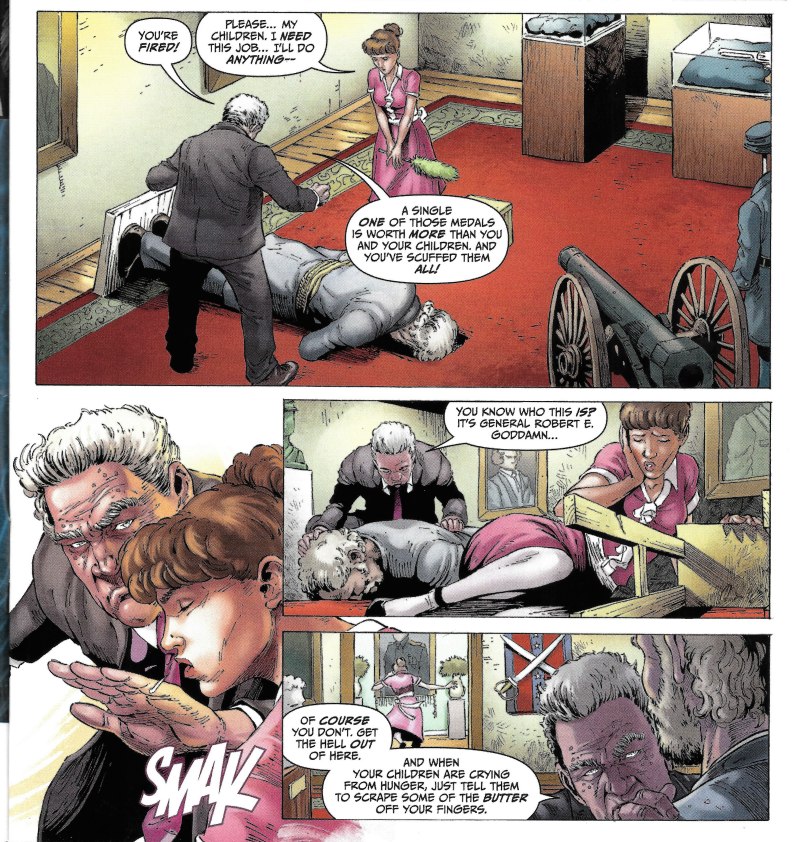 We start with this wealthy southern landowner who might as well be a slaveholder, the way he treats the hired help.

Way to be a jerky-mcjerkface, there. It's okay. I have this feeling he's going to get his just rewards. Maybe right now with who is at his door… 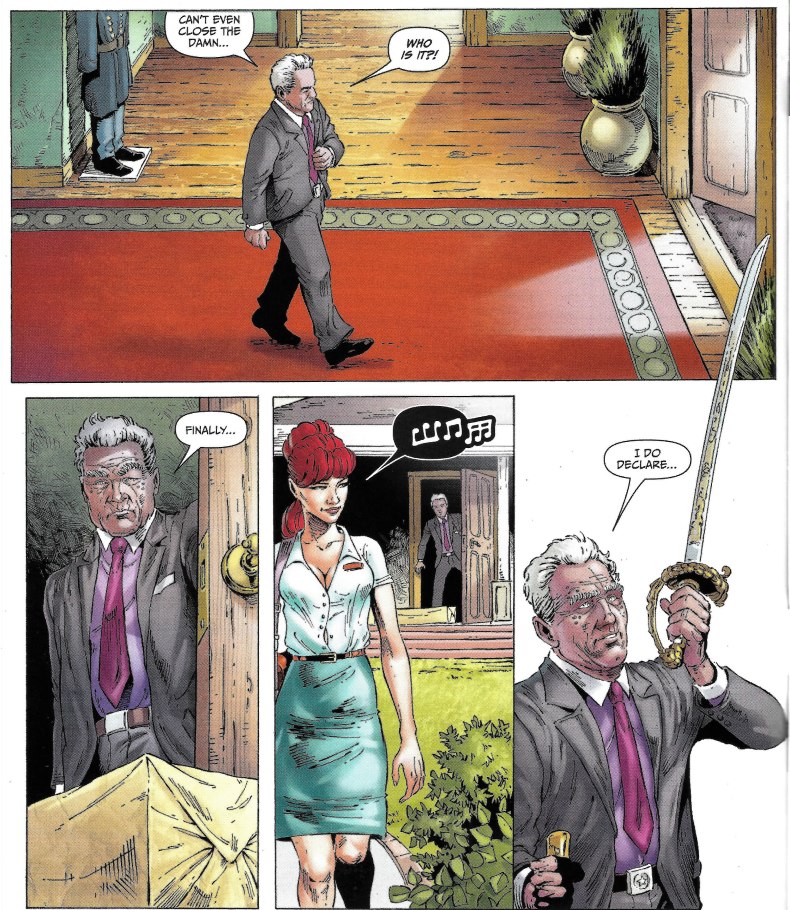 Crap. I was hoping for a bomb or something. Instead he gets an original Robert E Lee battle sword. *sigh*

Okay, then on to the feature: next door to him is a collector of fine and rare artifacts from a bygone era. His name is Thomas Tressler and he's about to get a DVD he's been waiting a long time for… 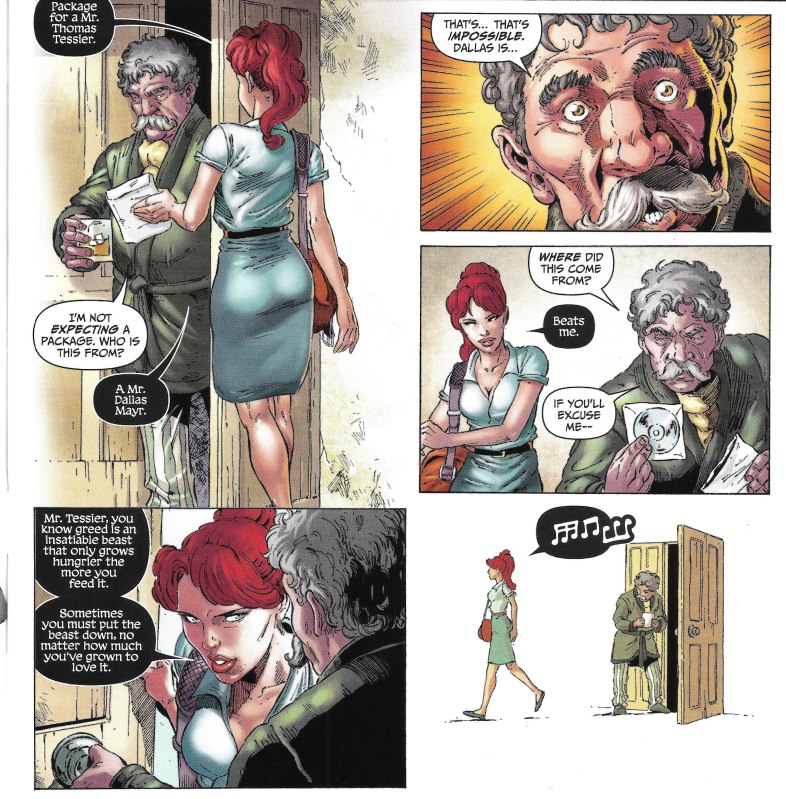 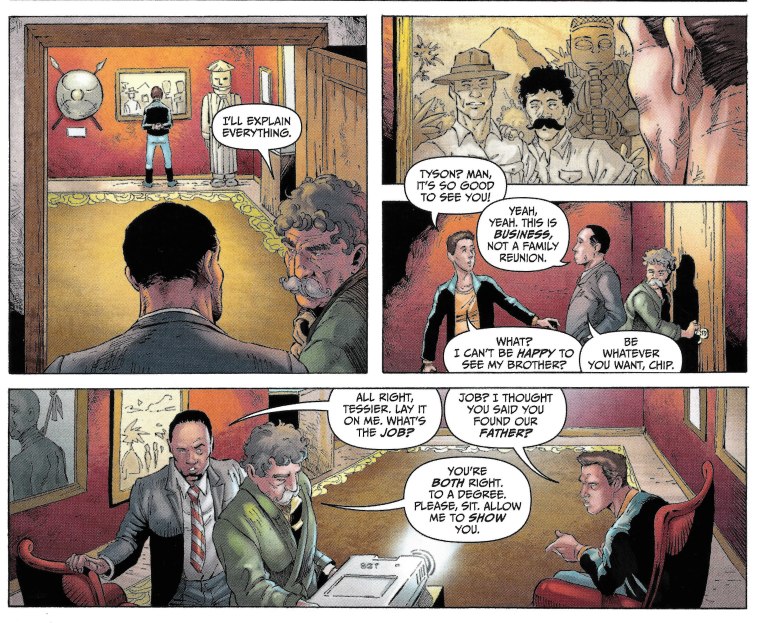 They are seeking their Father who…you know what, I'll let him explain through the magic of DVD… 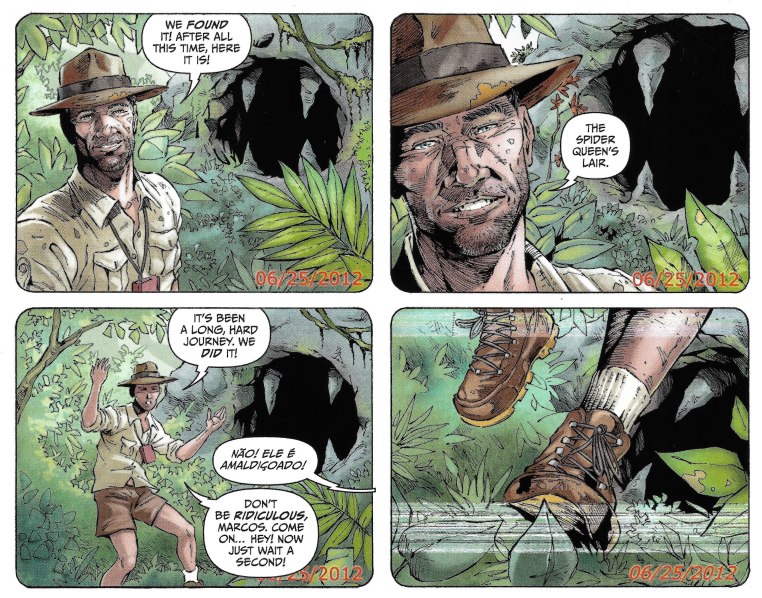 "Foooouck Yoooooooou!" I mean, he doesn't say it, but that running away thing is kind of universal.

And speaking of universal, if your Dad is three years overdue from some cave of horrible spider evil, the fact is he's dead. It's just a known thing. So of course Chip and Tyson decide to hold a ceremony for their Dad and then put this part of their lives behind them and…

No. No. They never do that. What do they always do? Go to the scary spider cave. Yup. Always.

Oh but before they go (with Tressler in tow and footing the bill), there's this little bit of added incentive. 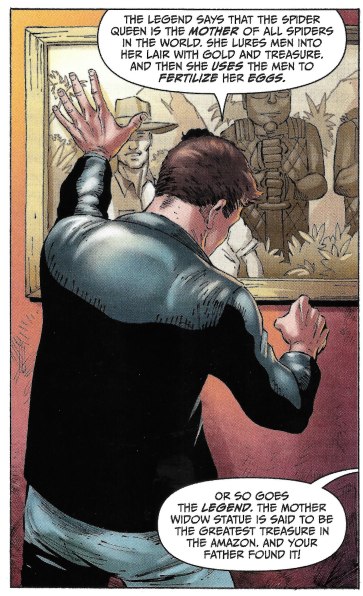 If nothing else convinced you to stay, this should. They should all be like "yeah, naw." Instead they go and they hire Marcos too, because that worked out so well for everyone last time. 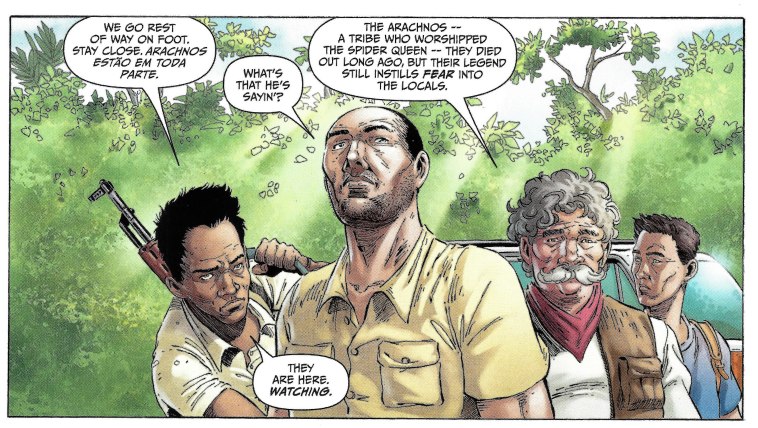 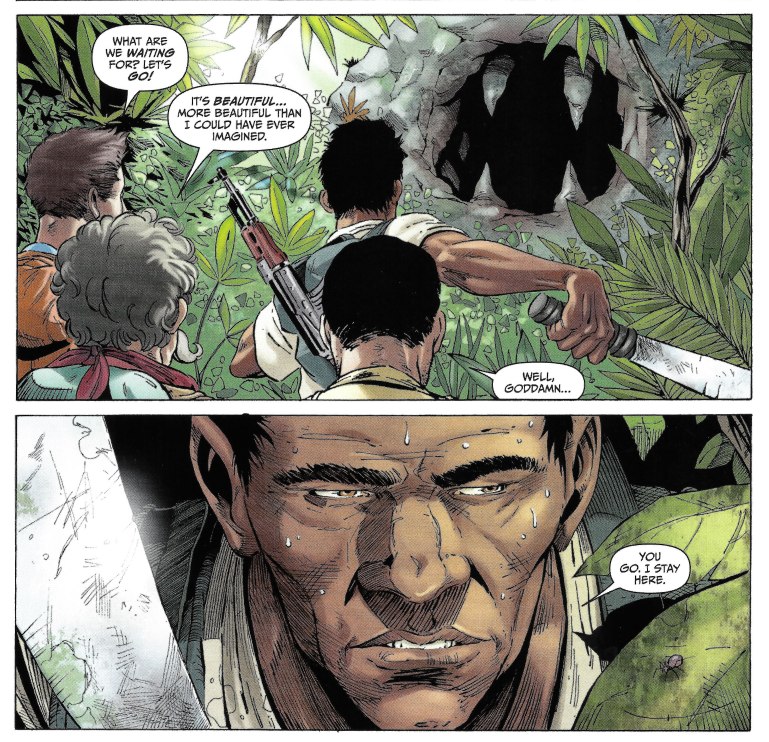 As scary caves go this one has all the amenities. You know like darkness…

…and bottomless drops. You know? The usual. 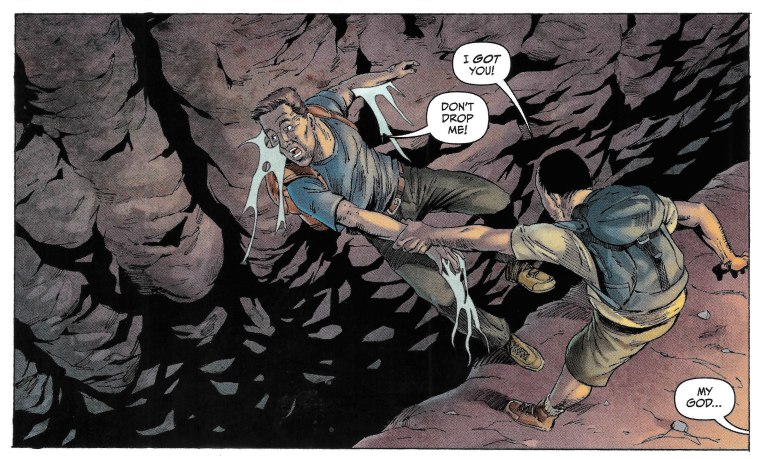 It also has a spidergod room filled with gold and the decomposed remains of Chip and Tyson's Dad. Aww. Shucks. You're only three years too late guys. 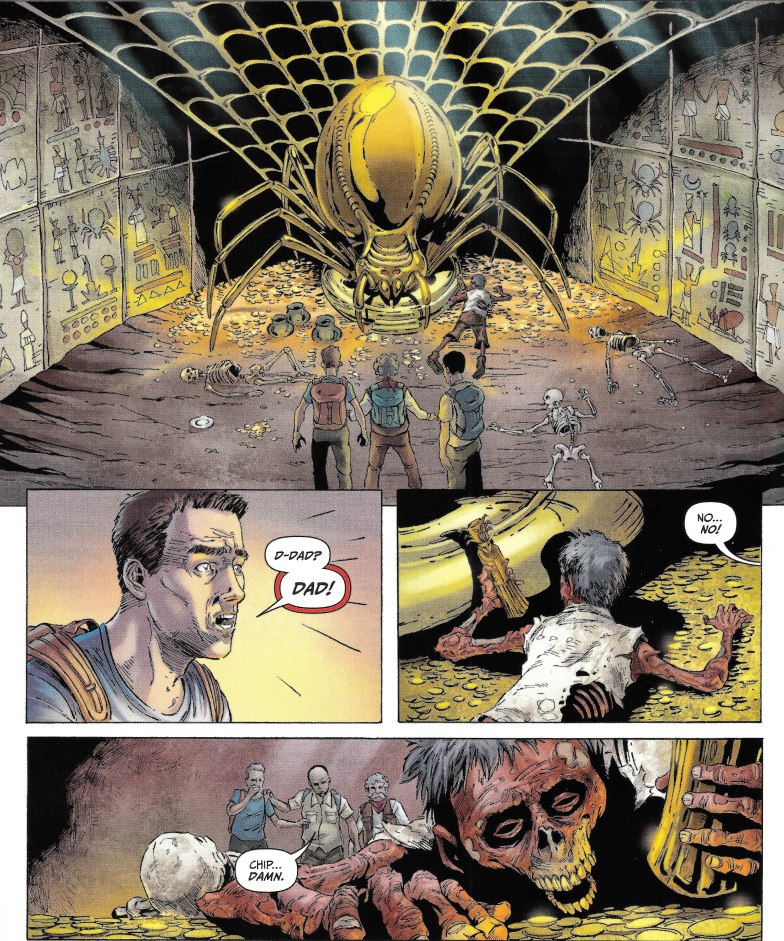 In a complete reversal of the horror comic guidebook rules: when tiny poisonous spiders start pouring out of their Dads corpse and biting them, Tressler sacrifices himself so that they can get away. 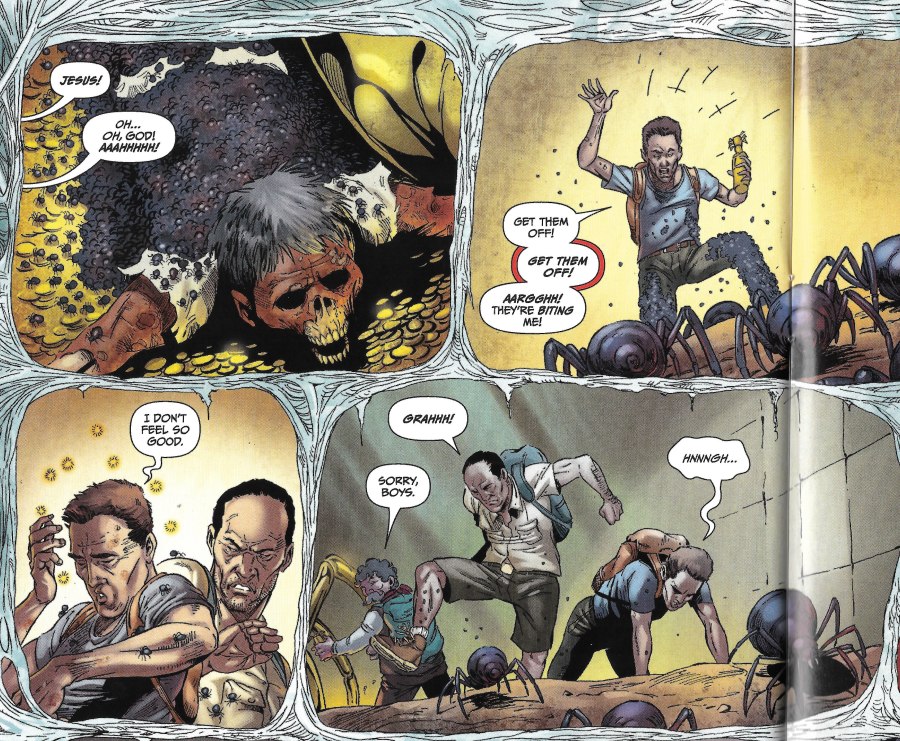 Wait, No he doesn't. He clubs the elder brother over the head, takes the statue that Chip is holding and runs off. Marcos is waiting for him at the cave entrance. 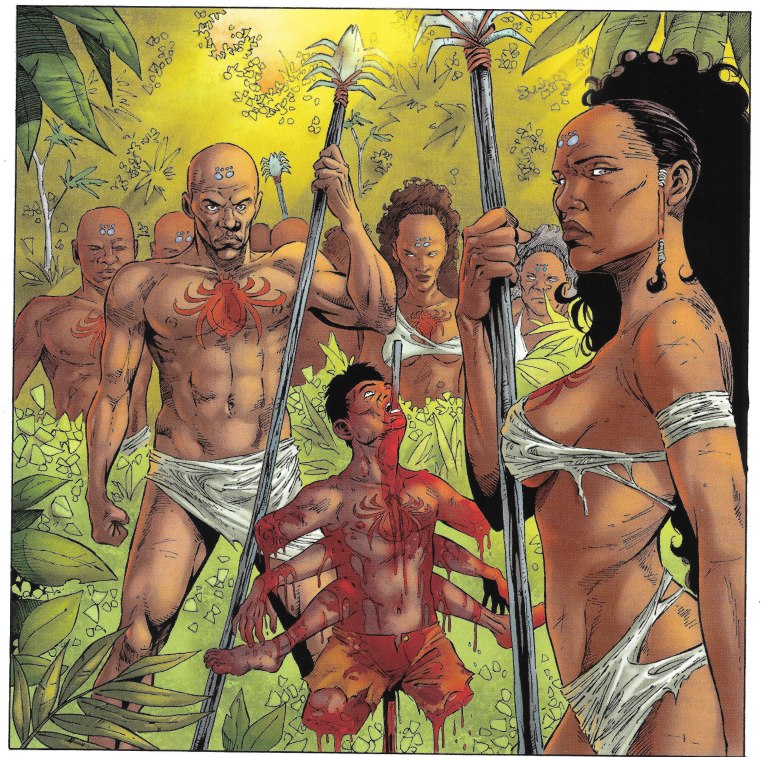 Okay, What's left of Marcos is waiting for him at the cave entrance. Tressler drops his ill-gotten booty and heads back into the cave in hopes of finding another way out.

What he finds are Chip and Tyson, who are so glad to see him. 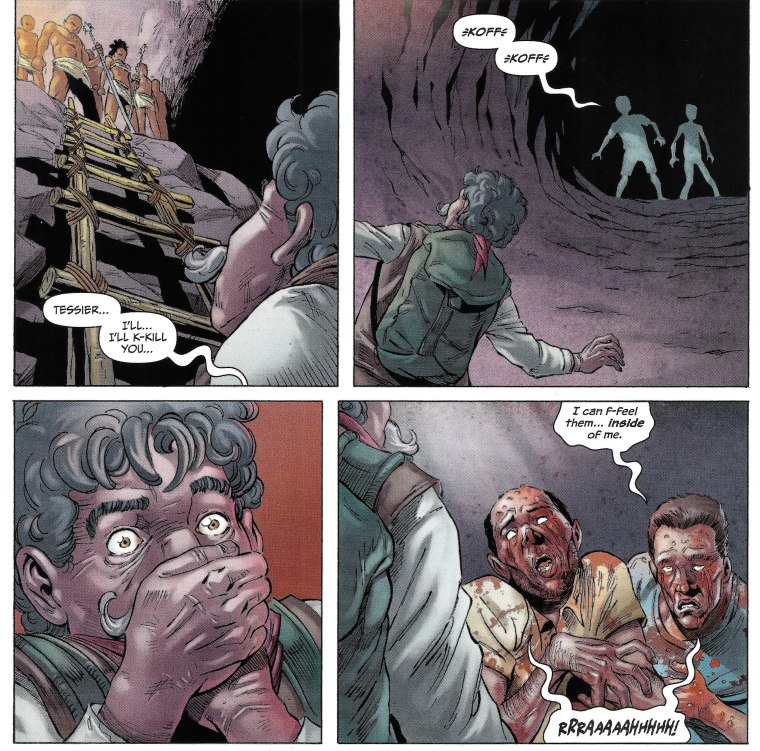 They are just bursting at the seams. No really. Bursting. 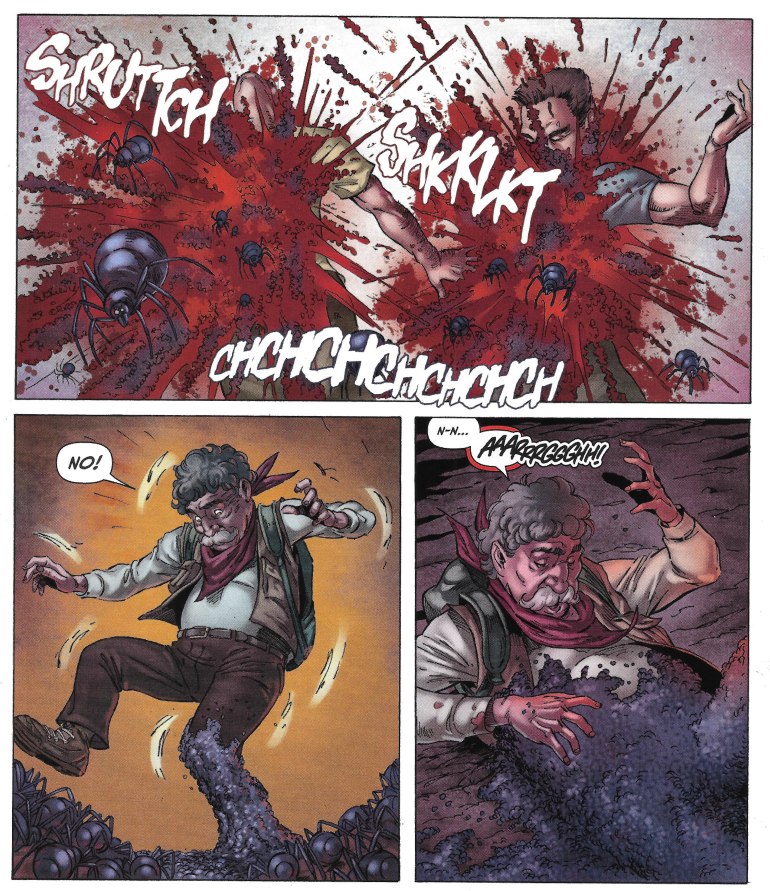 See. Now Tressler's up to his eyeballs in spiders. When next we see him, he's looking a little stuffed. Like fit to pop. 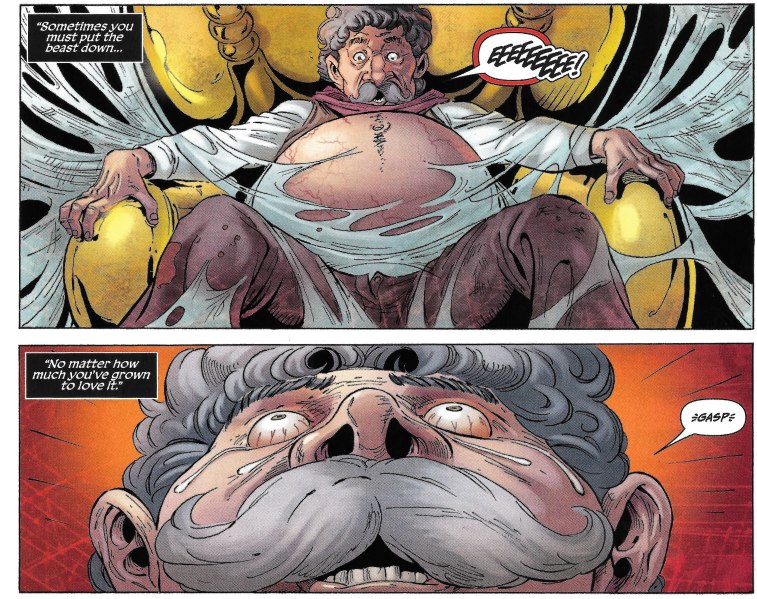 Yes, a giant spider pops out of him, ending our tale…

But we check in with the neighbor next door before leaving. Appears he was trying on the General's uniform because he loves him some slavery and killing Yankees. Sort of like racist Civil War cosplay.

He remembers at the last minute to put the hat back. 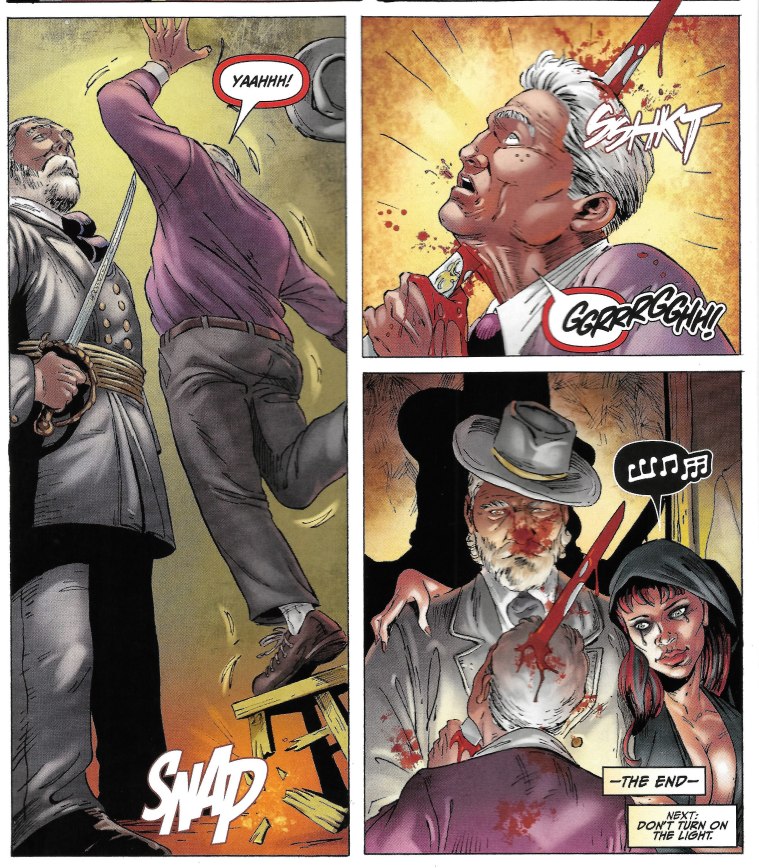 And with that, the final whistle is blown on this one, folks. I enjoyed it. So how many of these Grimm Tales of Terror are there? Volume one went on for 13 issues and a second volume that is still currently running at 11 issues. If this issue is any indication, they have the formula right.
Posted by SonOfCthulhu at 2:07 AM