Horror-ible, Part XXIV and Tie-Ins, Part XV: It! The Terror from Beyond Space #2 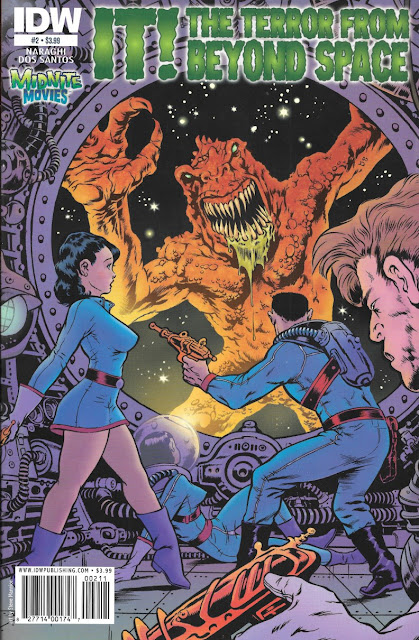 A slight update of a 50's horror classic

I am a huge B-movie fan.

In fact, part of my internet handle speaks to that fact. I chose the "Son of Cthulhu" moniker way back 15 years ago to profess my love of two things. The "Son of" comes from a childhood spent basking in the glow of black and white horror films on the 3:00 pm afternoon movie. We never got the really good stuff, usually stuck with studio sequels to the Frankenstein, Wolf-Man, and Dracula movies. So I sought to pay homage to my love of those imperfect pieces of celluloid that reared me.

The "Cthulhu" part came from my discovery of the writings of Howard Phillips Lovecraft toward my late teens.

So revisiting a classic sci-fi horror B&W movie in comic book form sounded like heaven. Oddly enough, this was one I hadn't seen before. I am unsure how I missed it as have countless hours was spent pouring over greats like "The Thing (James Arness version)," "The Beast from 20,000 Fathoms," and "Them". This one must have just slipped through. 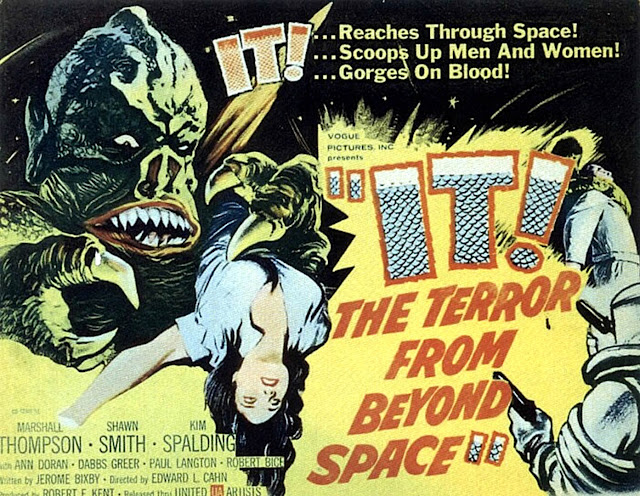 I'm glad for the books inclusion here, since it forced me you pull it up and watch it off the internet. While you will find it out there, it may require a fee to watch. I am not sure I would recommend it to any but horror film die-hards who like 50's B&W movies.

It isn't bad, per say, but it contains some rather silly concepts like the crew using grenades (that look like WWII pineapple tossers) INSIDE the spaceship and poison gas on the creature, both of which would probably kill the crew faster than the actual monster.

And speaking of that monster, not only is it a guy in a rubber suit but it is shown full torso in most of the shots. Someone should have explained to the director that you create more suspense if you don't allow your rubber suit to be shown a bunch.

It is widely regarded by horror fans favorably, holds a positive score on Rotten Tomatoes and is very much the spiritual predecessor to my all-time favorite movie "Alien".

And speaking of it being so widely liked, this is the SECOND time someone put out a comic book adaptation. The first occurred in 1992 by Millennium Publications, and was a four issue mini written by Mark Ellis with pencils by Dean Zachary. I've seen Issue 2 of that adaptation in another spot in the Crapbox, perhaps filed under Science Fiction. After Halloween, maybe I'll dig it out.

This 2010 book had the story adapted by Dara Naraghi and featured interior art by Steve Mannion. The second issue I currently hold in my hot little hands was released for a three issue run under IDW's Midnite Movies imprint and it decompressed the same storyline out with a bit of padding. And you'd think that three issues wasn't that much room for a feature film, especially one that someone was trying to stretch out the story, until you hear the original movie was only a hair over an hour long.

Issue two of this run begins about twenty minutes into the film. In the movie, a first attempt at visiting Mars ended in disaster as the space ship broke up upon touchdown. The crew survived the crash, but only Captain Caruthers is alive by the time the Challenge 142 rescue ship arrives. He tells tale of a creature that murdered and ate the rest. Nobody believes him.

The Challenge 142 takes off with Caruthers, never realizing that they have a stowaway on board. The creature has snuck onboard and without anyone the wiser, killed two crewmembers. It is here that we begin… 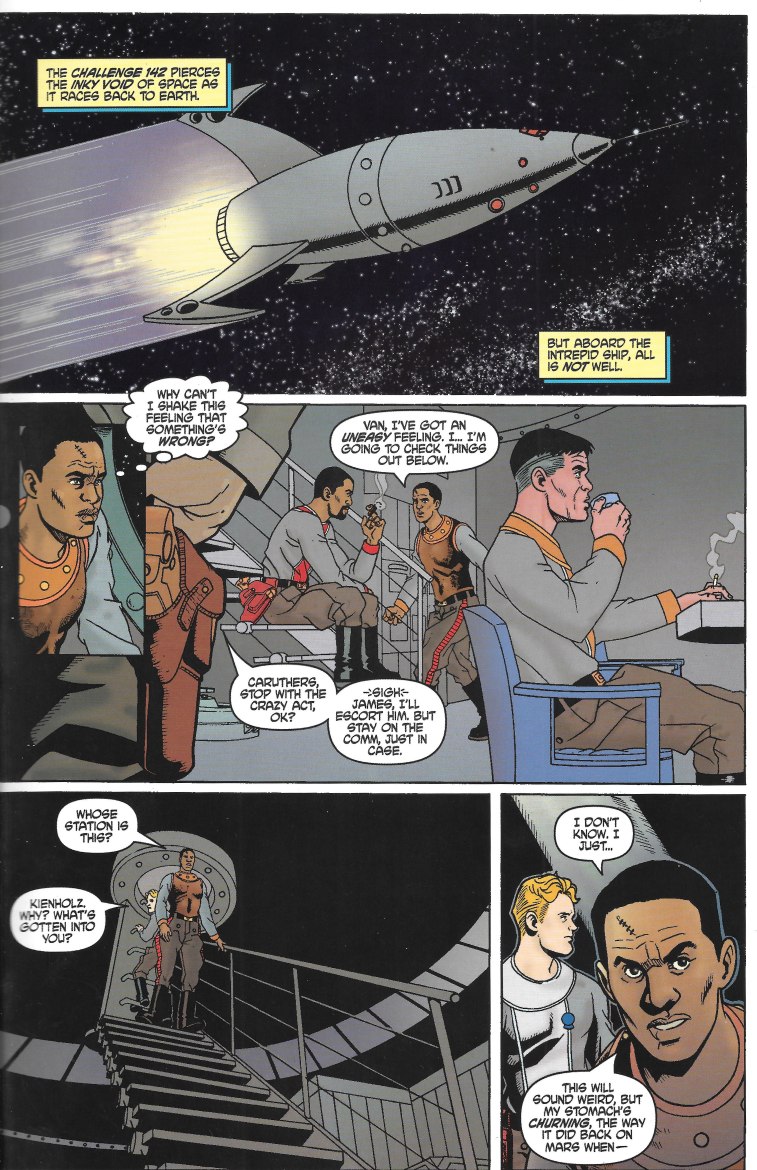 I am loving the attention to detail paid here. That ship and the goofy, completely unrealistic spaceship design (stairs in space? Really?)  mirrors the movie's set in close detail and is so wonderful. One derivation that I want to draw attention to is that this go around we have a more ethnically diverse crew, which is a great addition. There was far too much white washing in the original movie. Still, they are staying pretty true to the story and, for those that love it, that is a very good thing. 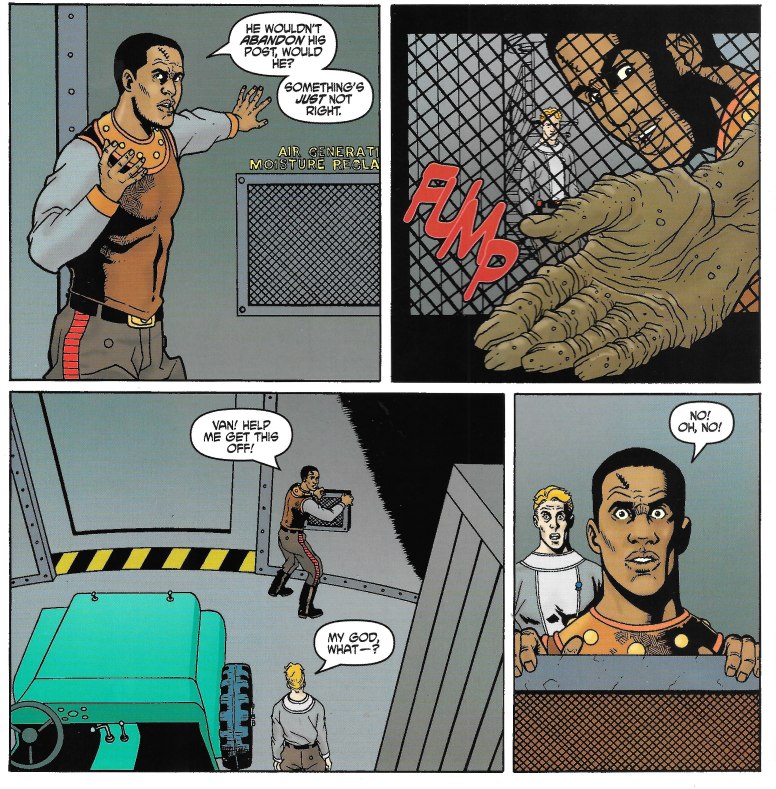 In investigating the missing crewman, they find his body shoved in the air duct, exactly like in the movie. 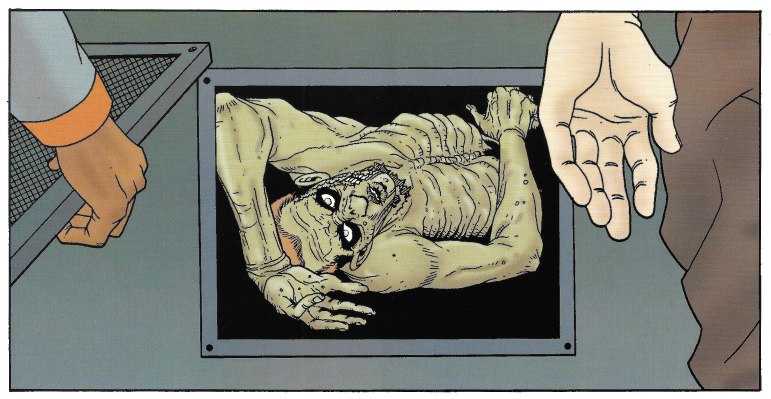 Although the makeup effects were not as good as this…

…and neither was the creature suit. Look at those fingers! The original only had three on each hand. This one looks to have six and…Holy CRAP! 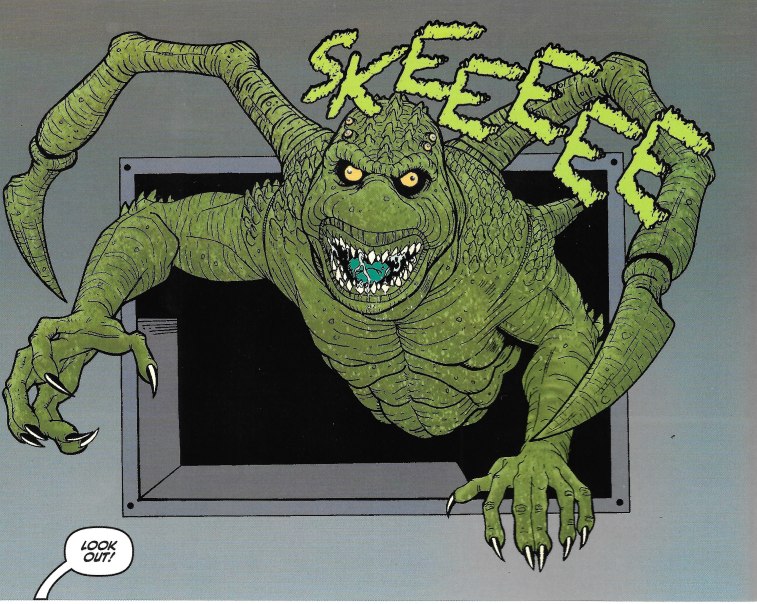 Wow! No way they could pull this off back in 1953. Look at those extra arms and hooks and fingers and that working mouth! This actually looks menacing. The creature in the movie looks like a guy in a suit.

Also upgraded are the crew's pistols, which went from being six-shooter revolvers to … 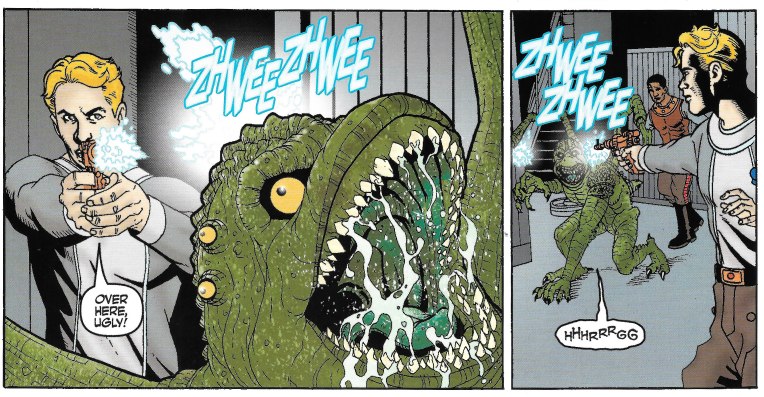 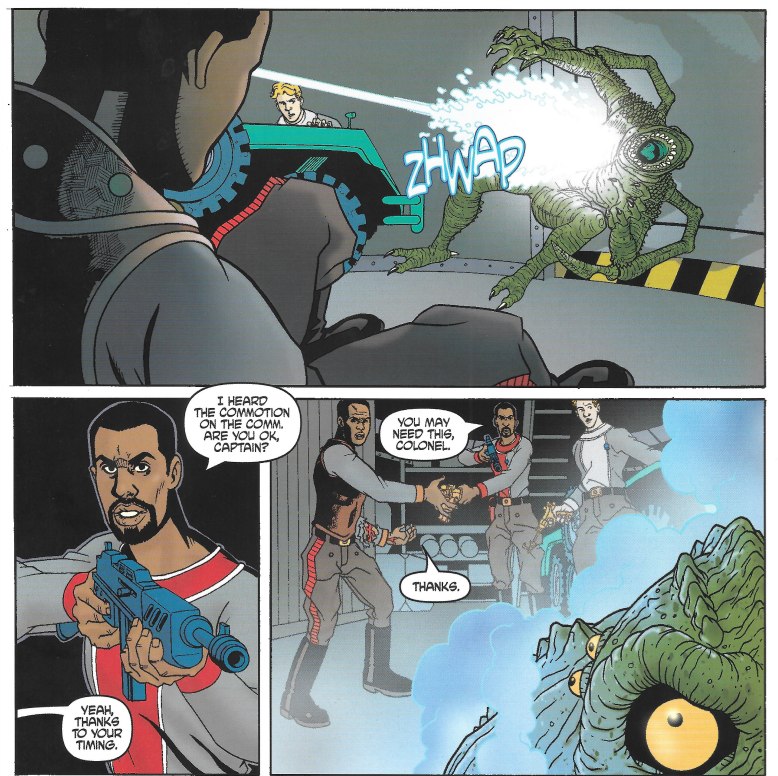 …yup! Zhwaping laser rifles. And using them, the crew murders the beast! 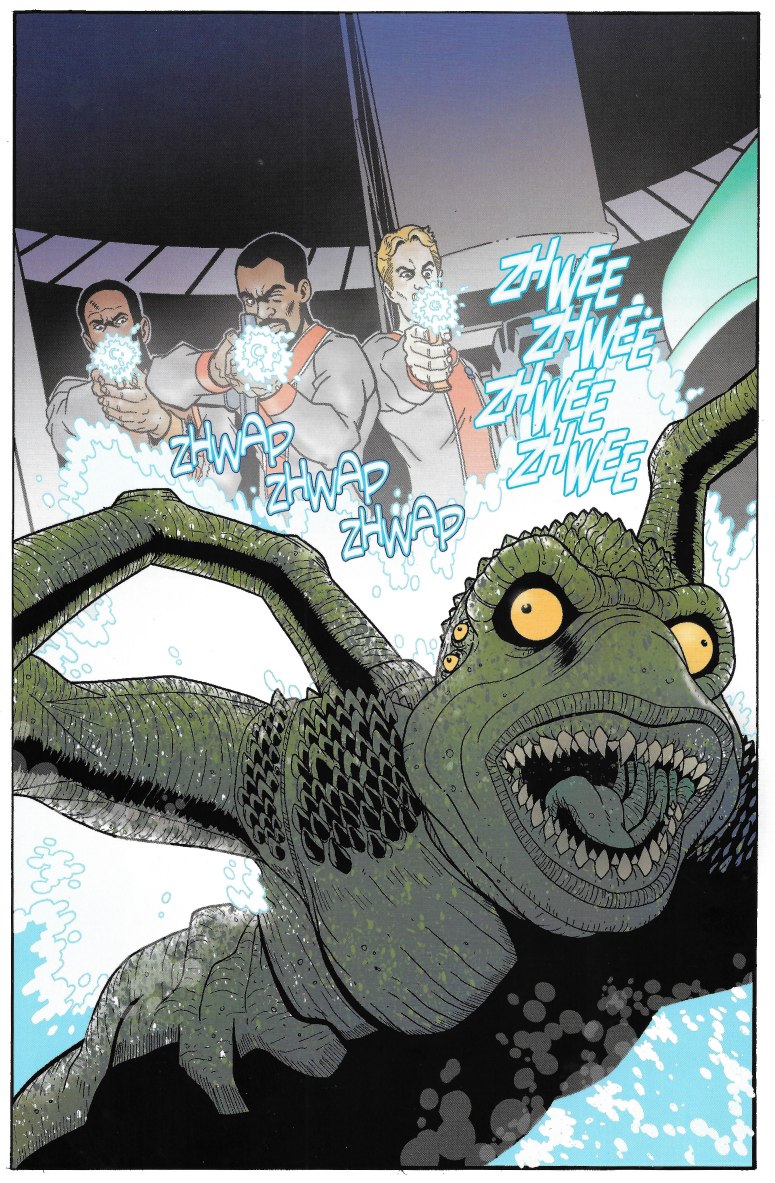 Okay, not exactly. The effect of all these improved (and vastly less worrisome physics-wise) weapons is the same as the movie's pistols. No real damage to the creature, but they serve to hold it off for a bit. Enough for them to take the dead body and amscray. 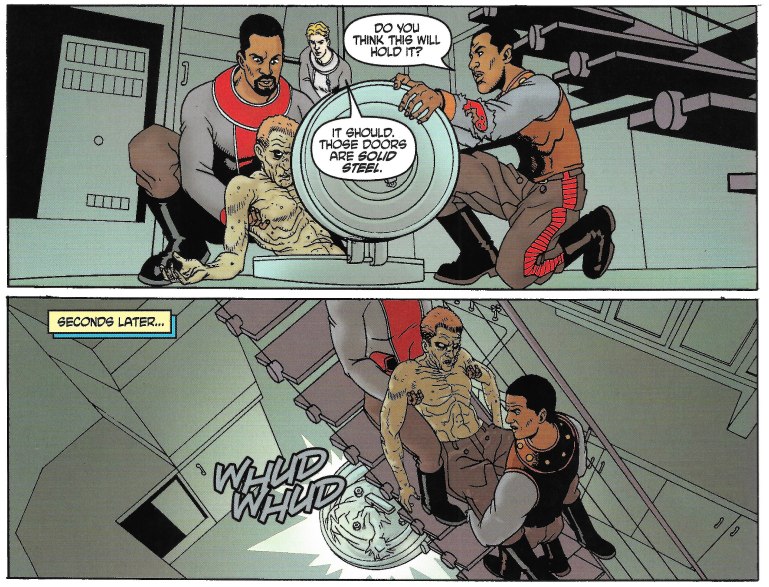 Just like in the movie, those hatches don't stop the creature for long. Unlike the movie there's changes to the lovey-dovey subplots, with Dr. Royce pining for Kienholz not so much Van who gets injured later. Oh and speaking of that here's how that goes down. 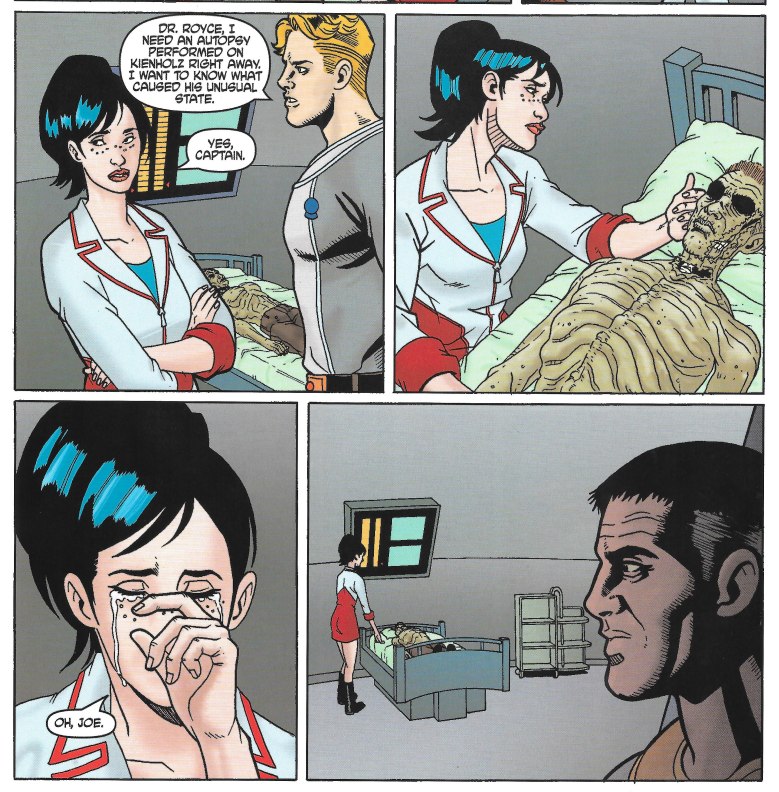 First the crew has a big discussion about what to do. The decision is reached that they should try gassing it. Gone are the grenades of the movie, which is a wise choice. But they are still going to release poison gas in an enclosed atmosphere which makes like zero sense to anyone with half a brain. It's not like that poison gas will abide anything other than a very specific type of airlock system. 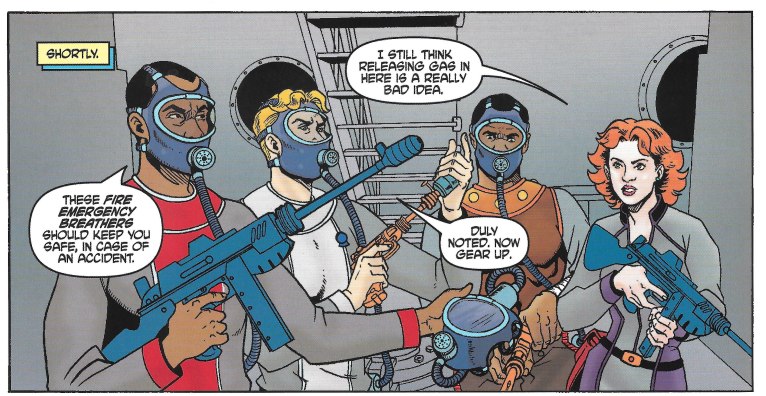 And those hatches don't seem to be it. But nicely we get some cool shots of people hitting it with poison gas grenades. 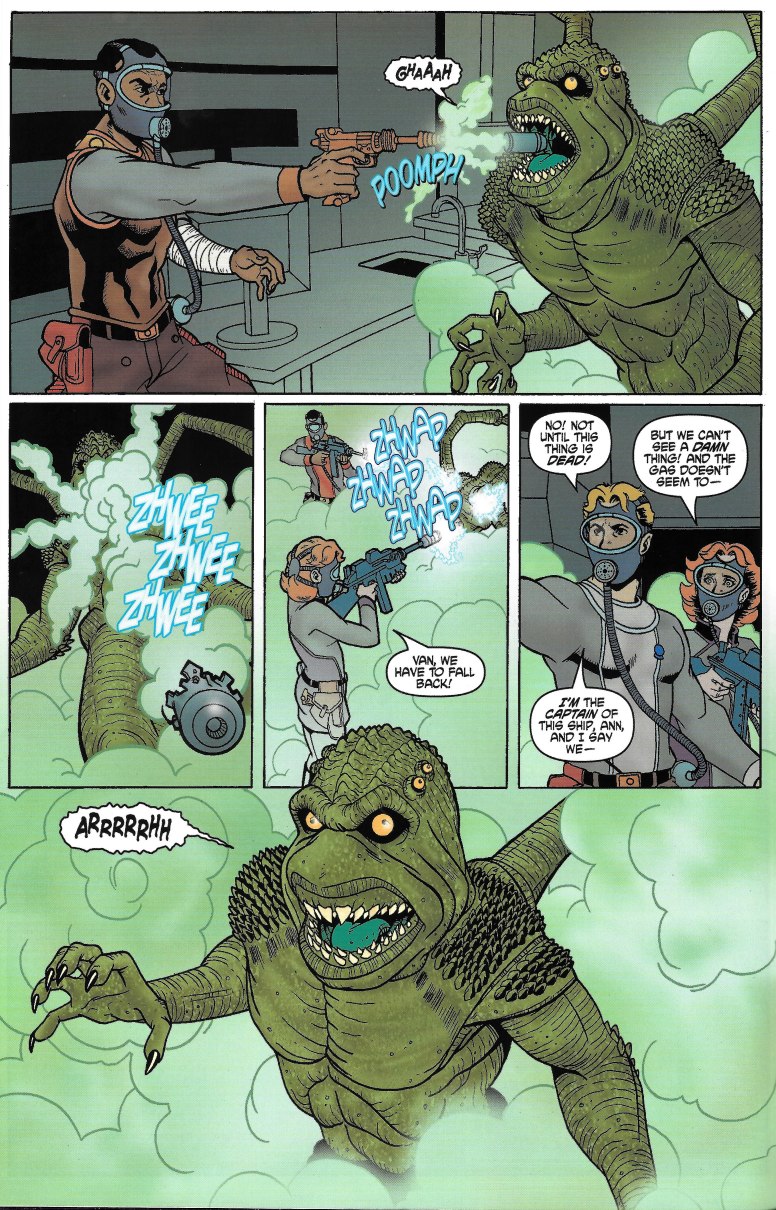 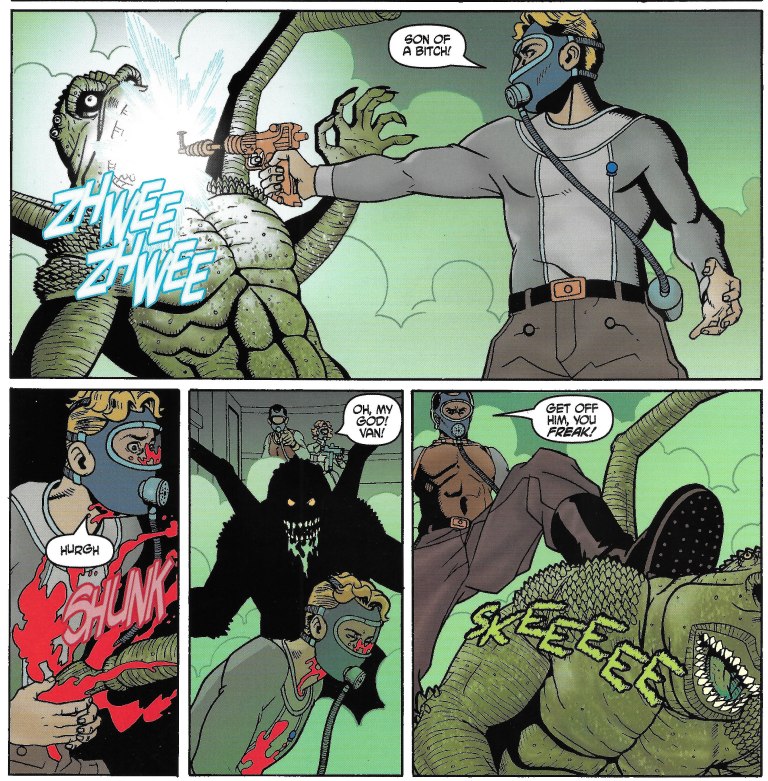 Notice how it is immune to guns and gas, but not space boots apparently. If only they had a big enough space boot to squish it.

As they beat feet, Ann gets a chance to shine a bit. 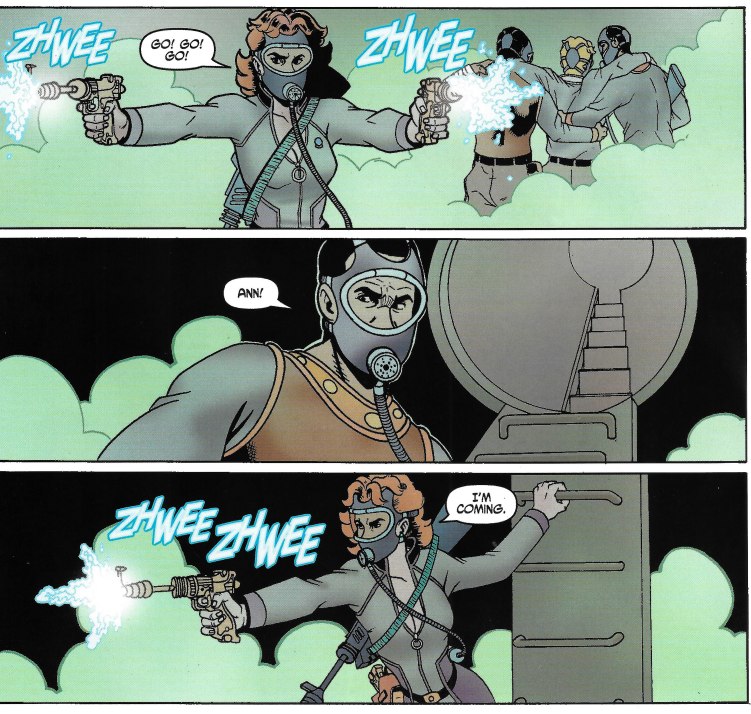 Nothing like an ass-kicking female in space alien movie. Not sure she's aiming at anything as that first panel has her shooting in two DIFFERENT directions at the same time. And if you can't see the creature to shoot at, why waste your zhwee-zhwees? 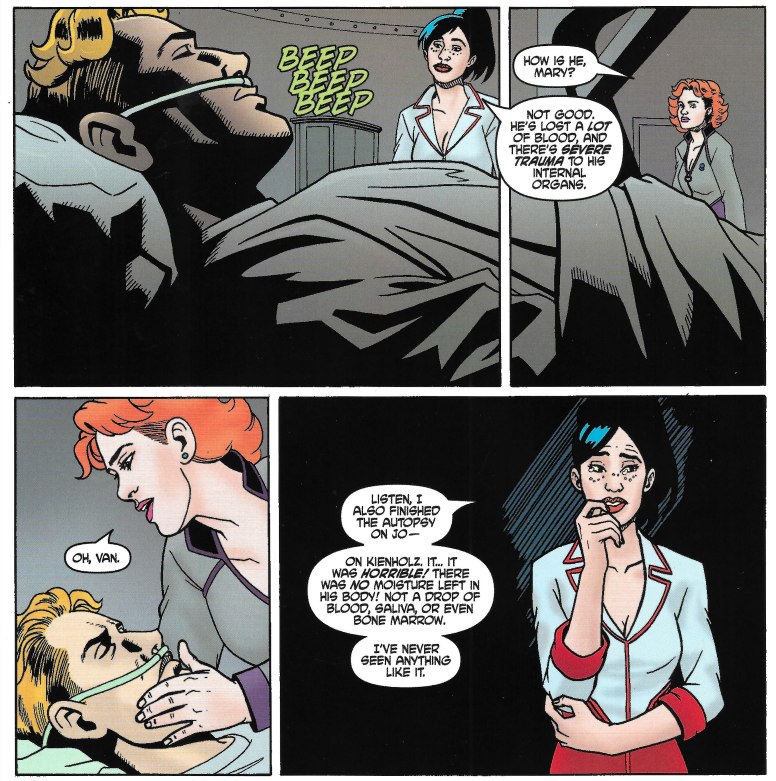 Now we setup the love triangle between Ann, Van and Caruthers, but it seems odd to have this happen right after Dr. Mary Royce's reaction to Kienholz, and also the Dr. was the one who fell for Caruthers in the movie. I'm sorry I can't let more of this go. It is jarring to read this after having just watched the movie. I'm sure "real fans" of the flick would agree. There's a lot more going on here than was never hinted at in the film.

Like this part, that echoes Alien a bit too much… 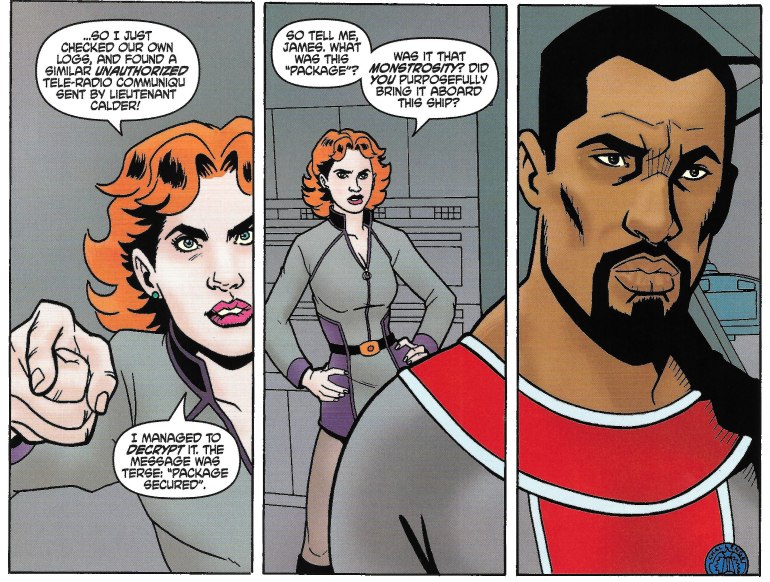 That hits pretty close to home. So the Captain had secret orders to bring back the Alien? Hmm? Also this occurs in a meeting about the engines needing adjusting and the only way to get to them was to spacewalk around the section where the creature is. Something that kind of happened but not for that reason. It's like they started throwing the script out the window at this point.

And don't get me wrong, that's okay and all. It just might make fans mad. I seriously don't care as long as the story is good. Although this story seems to have been done before. At least most of it. 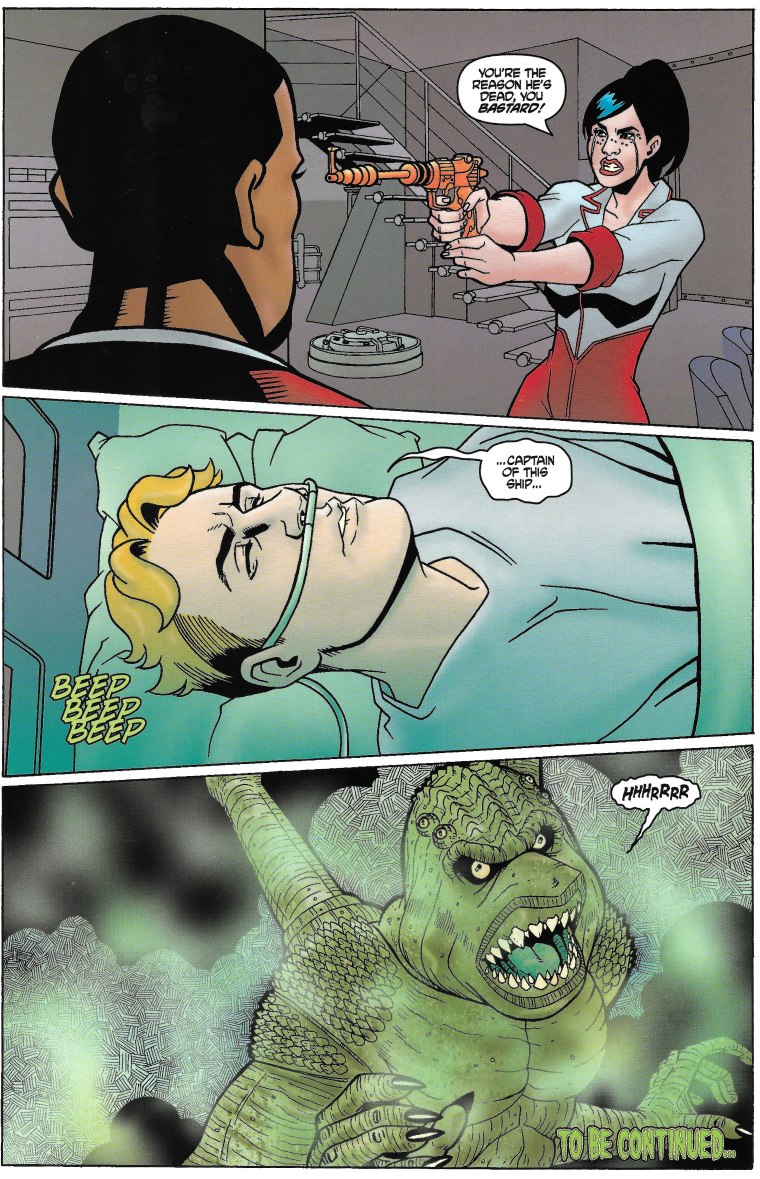 …the part where he gets confronted by the one of the female crewmembers.

Well, that's where we end. I have to say the movie did not impress me that much. It was too dated and they lost me when they did things that would endanger everyone in the ship (shooting guns, rigging grenades and pointing a freaking BAZOOKA at an object less than ten feet away).

The book fairs better, but not by much. The creature is still a poor-man's Alien, a rubber suit and not much terror. I wouldn't have lasted to the story's conclusion. If you like what you see here or are curious about the movie, you may want to check them out.
Posted by SonOfCthulhu at 2:32 AM