Witchblade vs. Frankenstein: Monster War #3 of 4

Witchblade vs. Frankenstein: Monster War #3 of 4 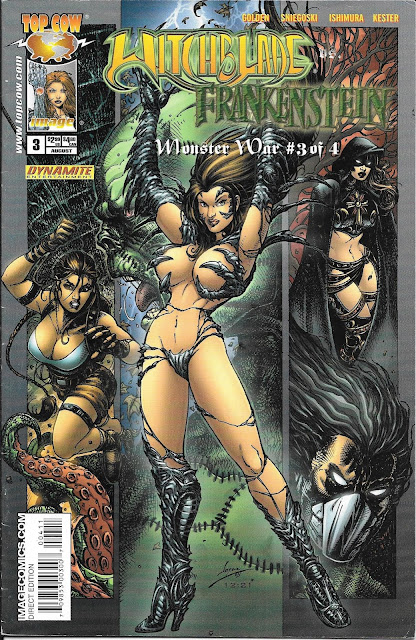 Top Cow “Universe” gets even crazier

And…Occasionally the Crapbox spits out the rare issue that causes me to go WTF in technicolor with sprinkles. The “Monster War” series qualifies for that.

Now, pitting your heroes against movie monsters is as old an idea as can be. I’ll even throw one out to you in just a day from Marvel in the 70’s.

That isn’t as surprising to me as the fact that there is a “Top Cow Universe." I knew that The Darkness and Witchblade had crossovers, what with Jackie Estacado having the hots for Detective Sara Pezzini that goes pretty far back in their shared history. And I guess the Magdalene was introduced in The Darkness, so that fits. What I hadn’t gotten to in my read-throughs was that Lara Croft of the Tomb Raider video game franchise somehow got glommed on to this as well. Then we add in the Universal classic monsters and…I don’t know. Seems like a house of cards that is already got some leaners in the mix. Let’s take a look.

We are approaching this at issue number three of a four issue miniseries so the book isn’t wasting any time setting things up for us. Our first page is the Platinum Kiss brothel, where beard-o and the sexy “model for every woman in a Top Cow comic book” have just boned. He’s leaving and making plans to return, when they inspect a noise heard downstairs. 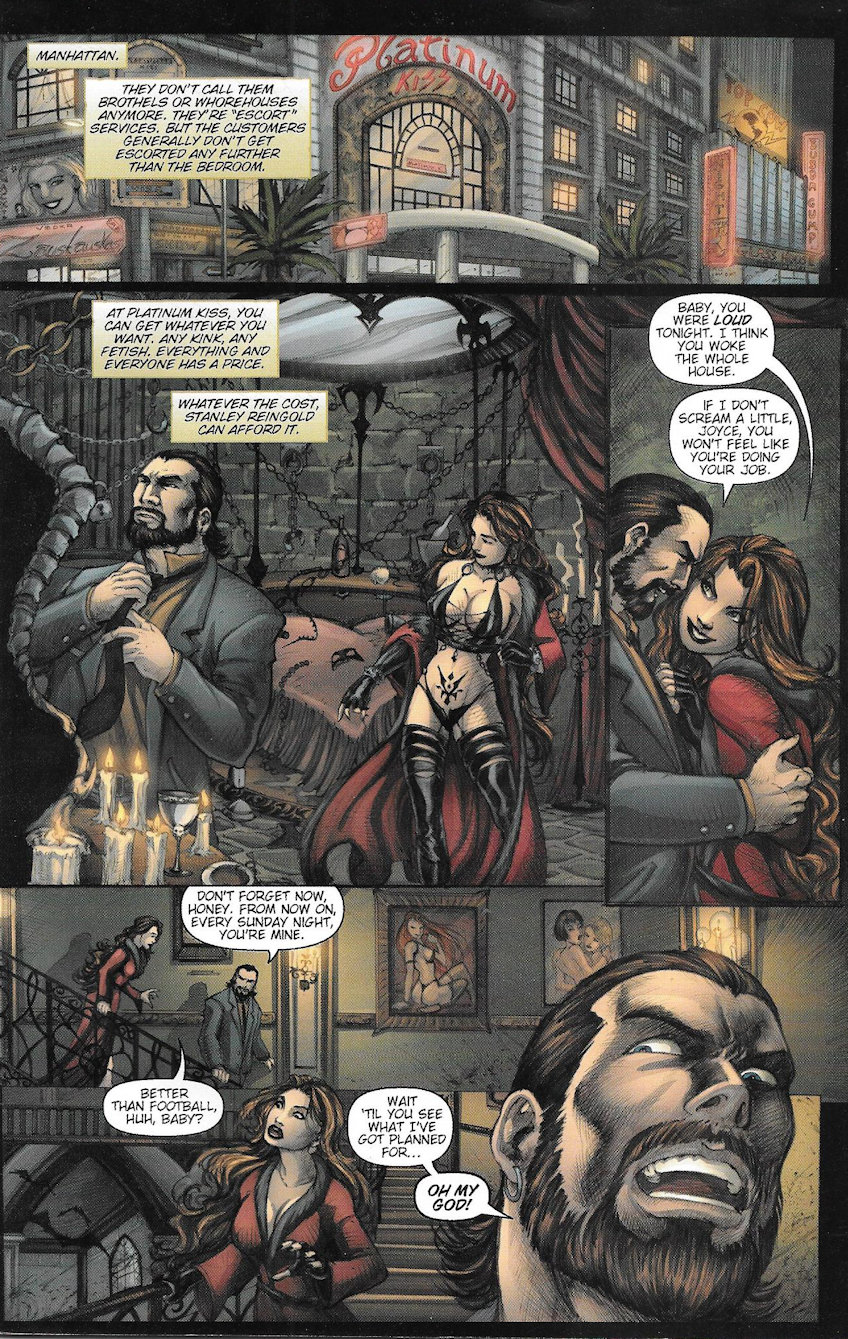 Where the pair find Dracula is in the hiz-zouse, and he’s killed all the other prostitutes. I’m not certain if I’m more upset by the murdered females or by the fact that they all look like Victoria Secret models. I mean, can’t one of them show a different body type? No? Fine. I guess this is a high-dollar house of prostitution. Carry on. 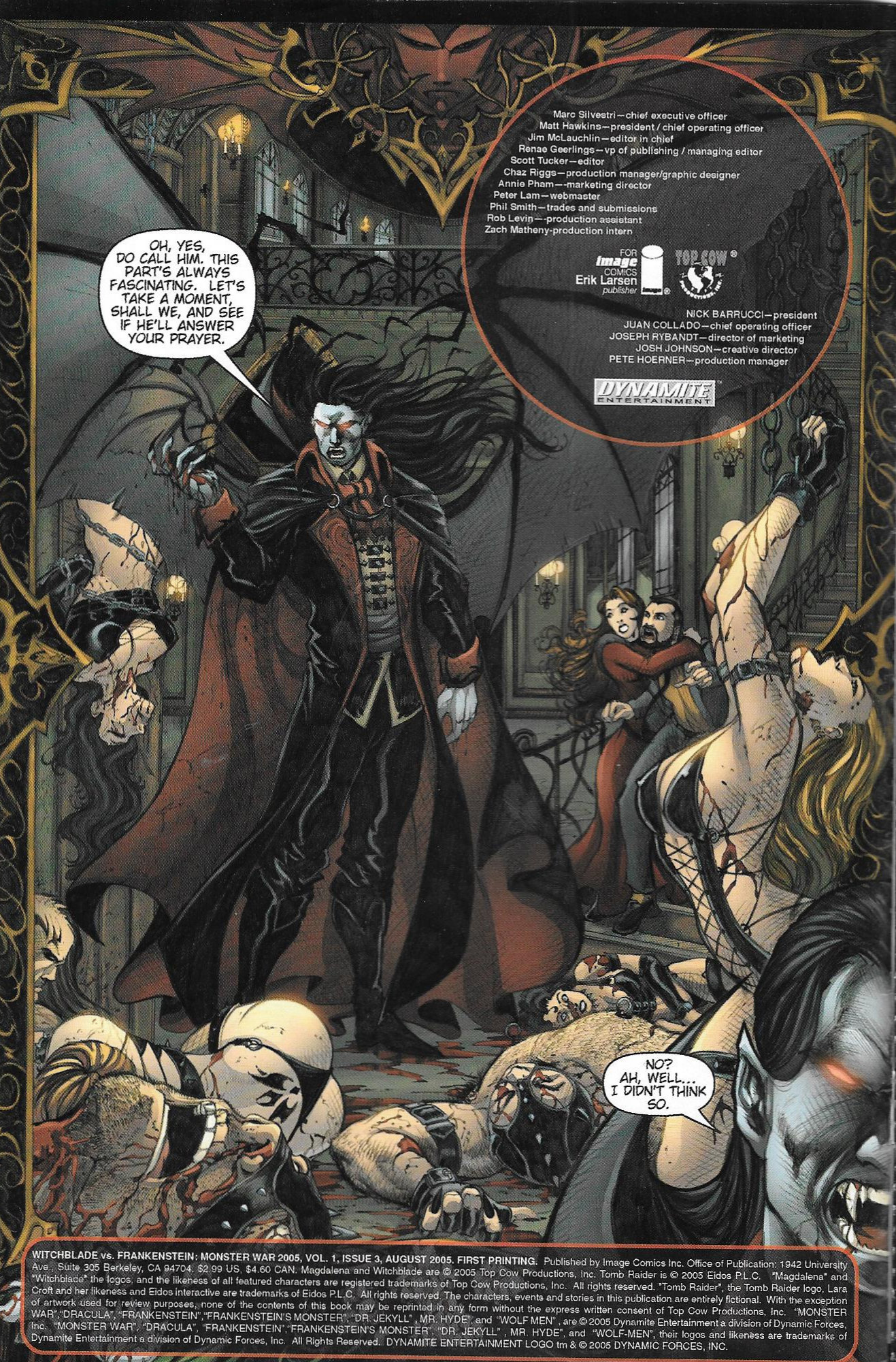 Moving on, the book introduces detective Sara Pezzini who is the current possessor of the mysterious supernatural gauntlet-slash-uberweapon known as the Witchblade. She’s pulled in on the case of the “lotta dead hookers”. All the while her icky romantic bad-boy love interest Jackie Estacado watches from across the street. Jackie is also a holder of supernatural power, being possessed by or the possessor of some kind of demonic force known as “The Darkness.” 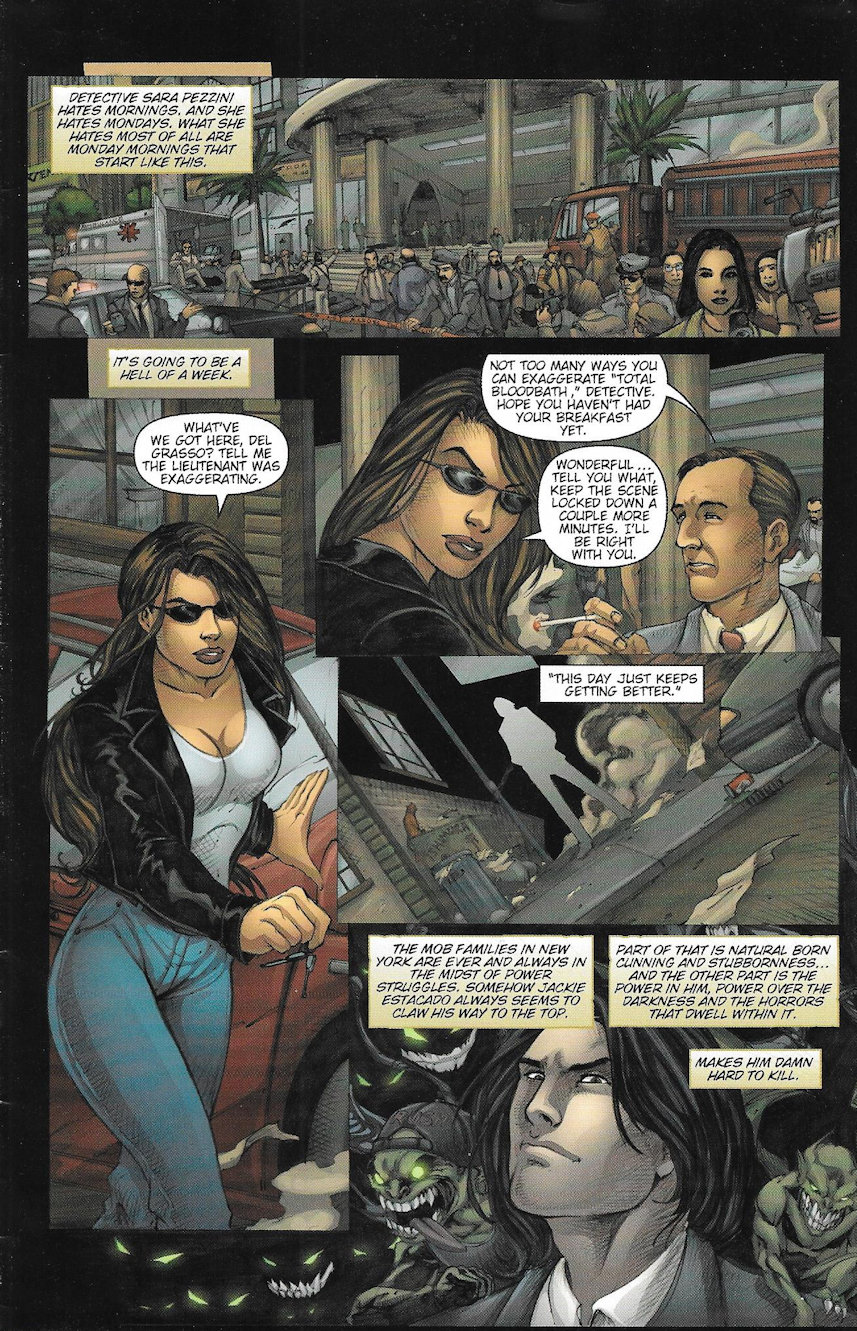 Sara warns Jackie to stay out of this while his crowd of demonic darkness entourage-creatures look on. Jackie steps out for 24 hours so he doesn’t make things messier for Sara, but warns that after that he’ll be coming for answers because this threatens his protection rackets. Which gives us our one-on-one battle in this book. 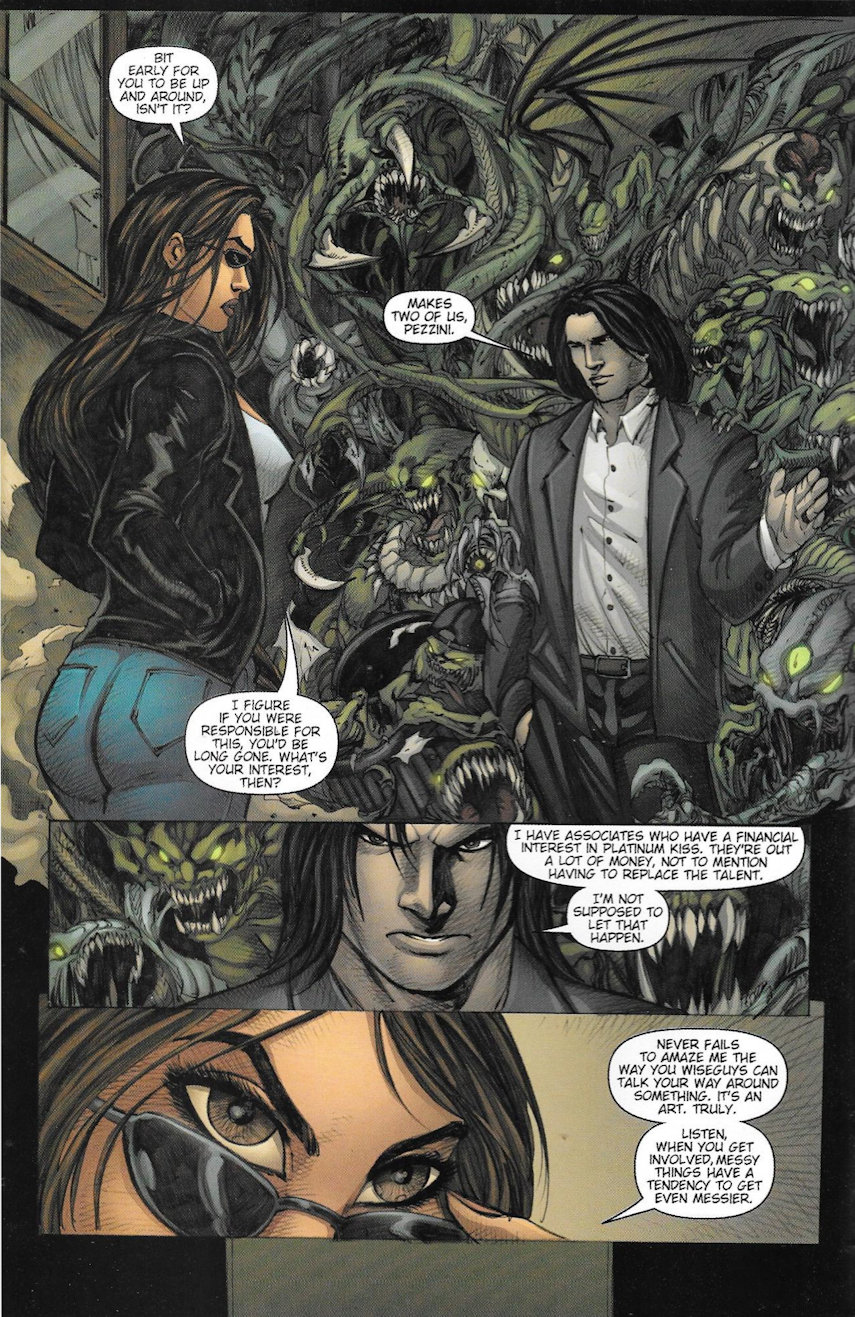 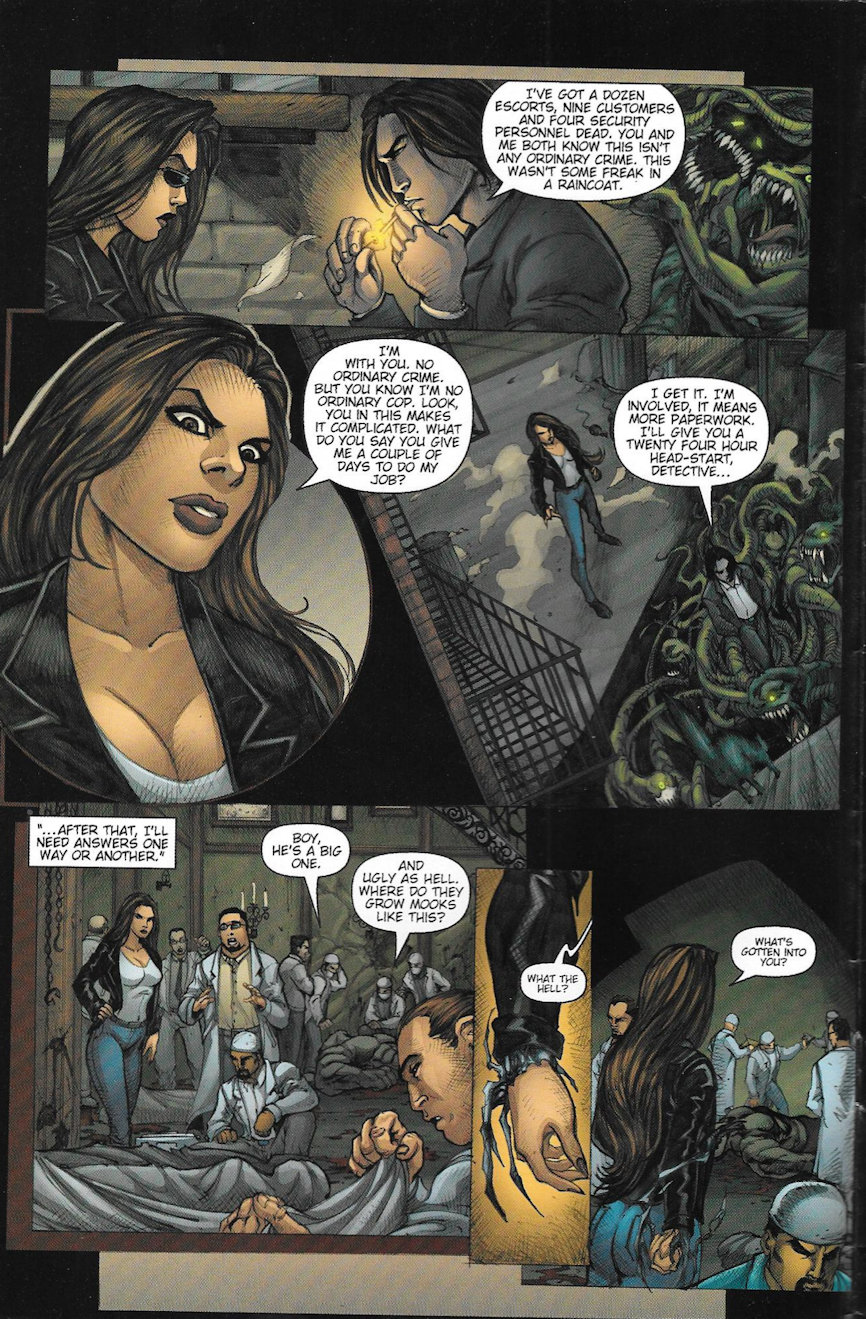 Then we flip over to Lara Croft and Dr. Henry Jekyll who are trailing The Magdalena. Seems she got a little too close to the vampire she was fighting in her part of this cross-over and now The Magdalena has got herself all vampired. Our pair is hoping she leads them to Dracula, who is conspiring with Jekyll’s subconscious Hyde persona. Hyde appears to have been split from Jekyll….and I’m feeling like issue 3 was no place to walk into this series at and I’m not even to the staples in the book. 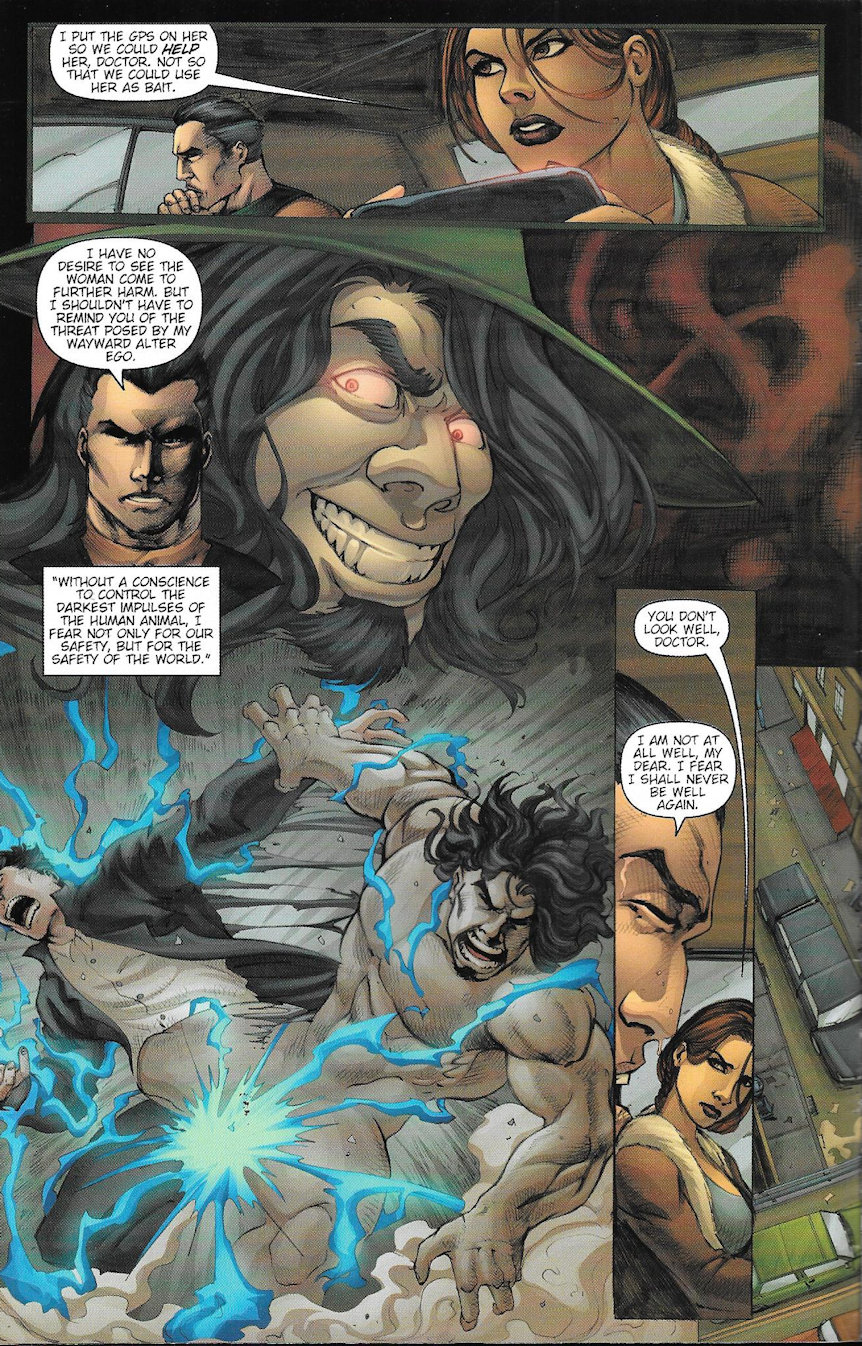 But we have to keep plugging on in this mess that is beginning to sound a bit derivative of something they stuck in the bastardized movie version of League of Extraordinary Gentlemen: a formula from Hyde’s blood. But never mind that, here is The Magdalena looking more naked than normal (which is quite a bit anyway) as well as kinda of Fang-tastic. We are just doing this to meet page count for mid-drift-baring women, because as soon as we see she’s completely under Drak’s control… 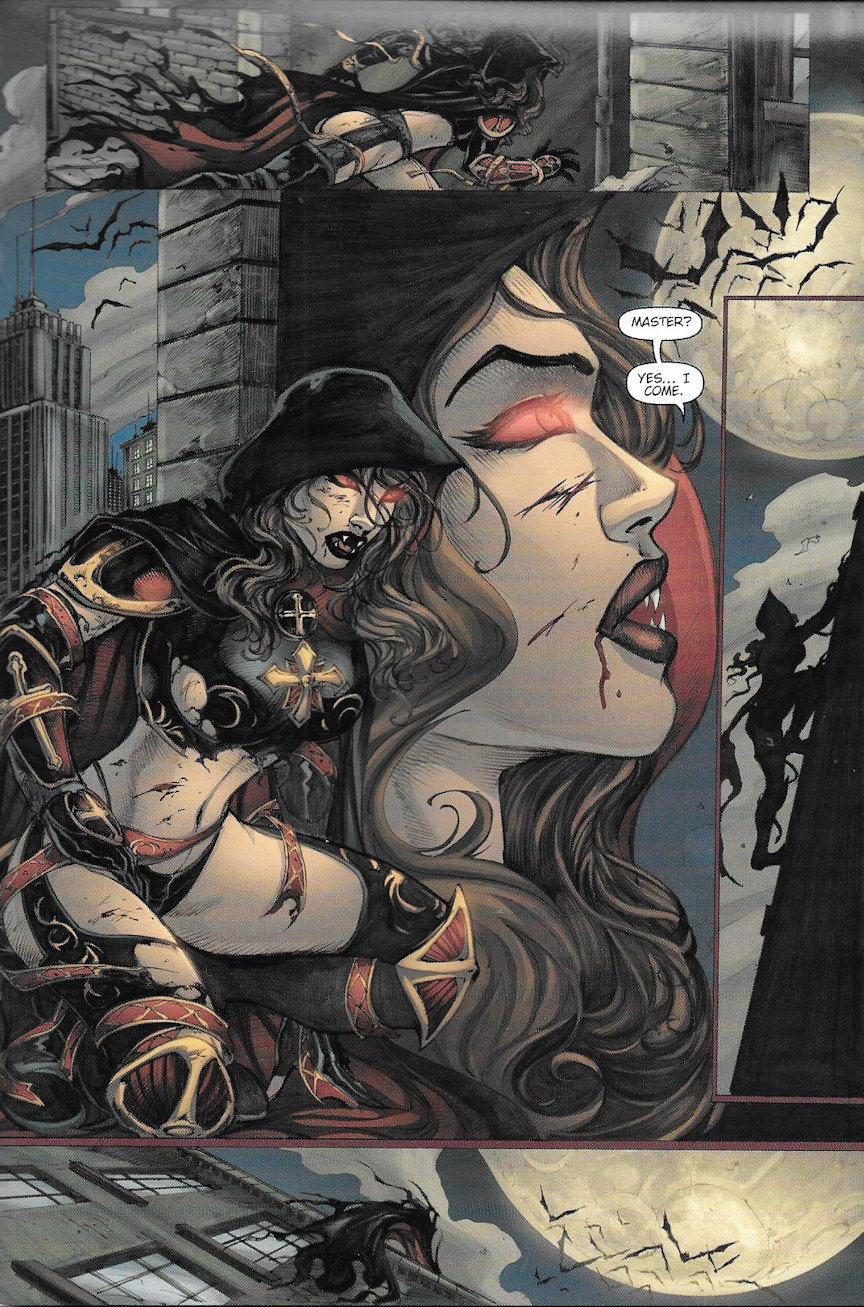 …we switch back to Sara at the morgue. She’s with this friendly morgue worker discussing the bodies and how they’ve been drained of blood. He lets slip that they have a male John Doe too. 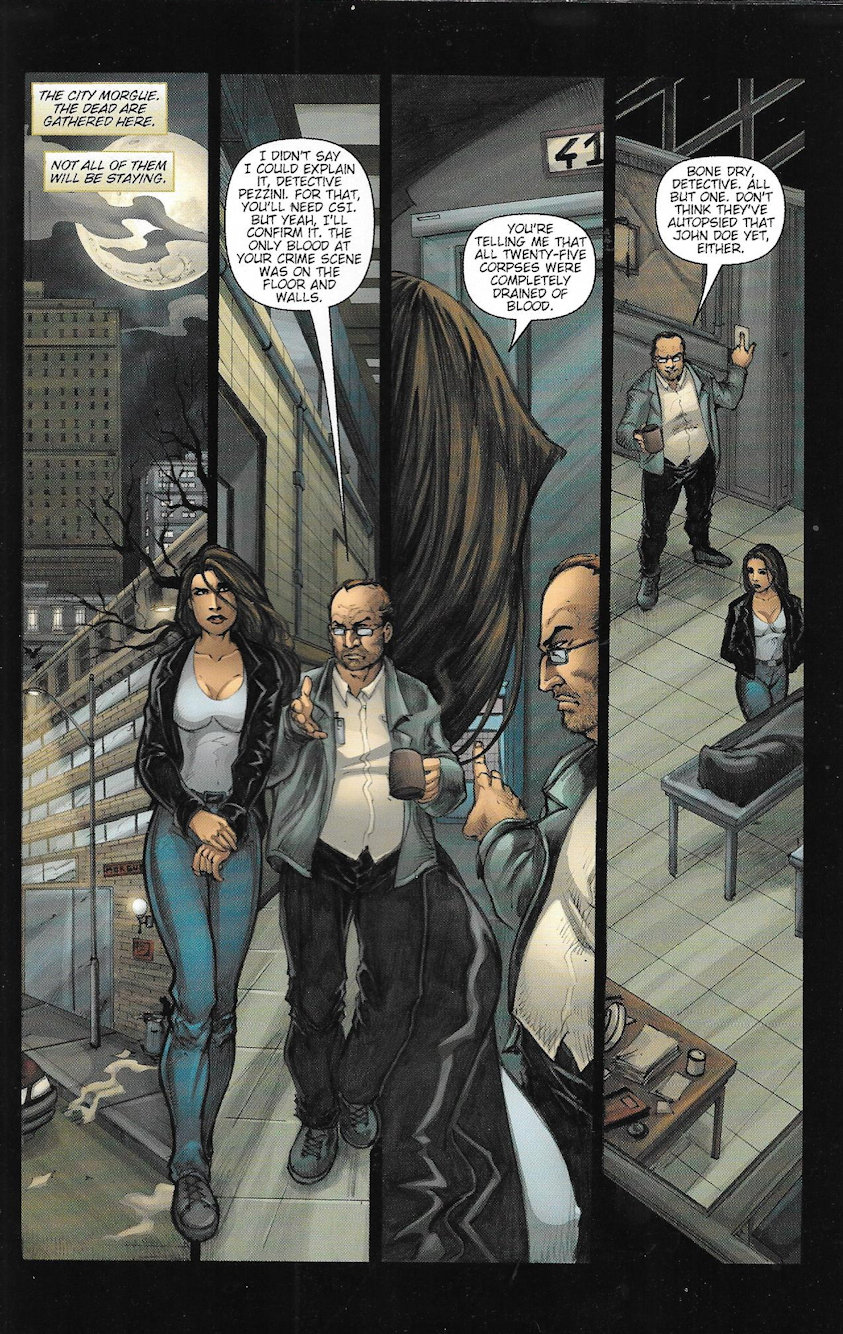 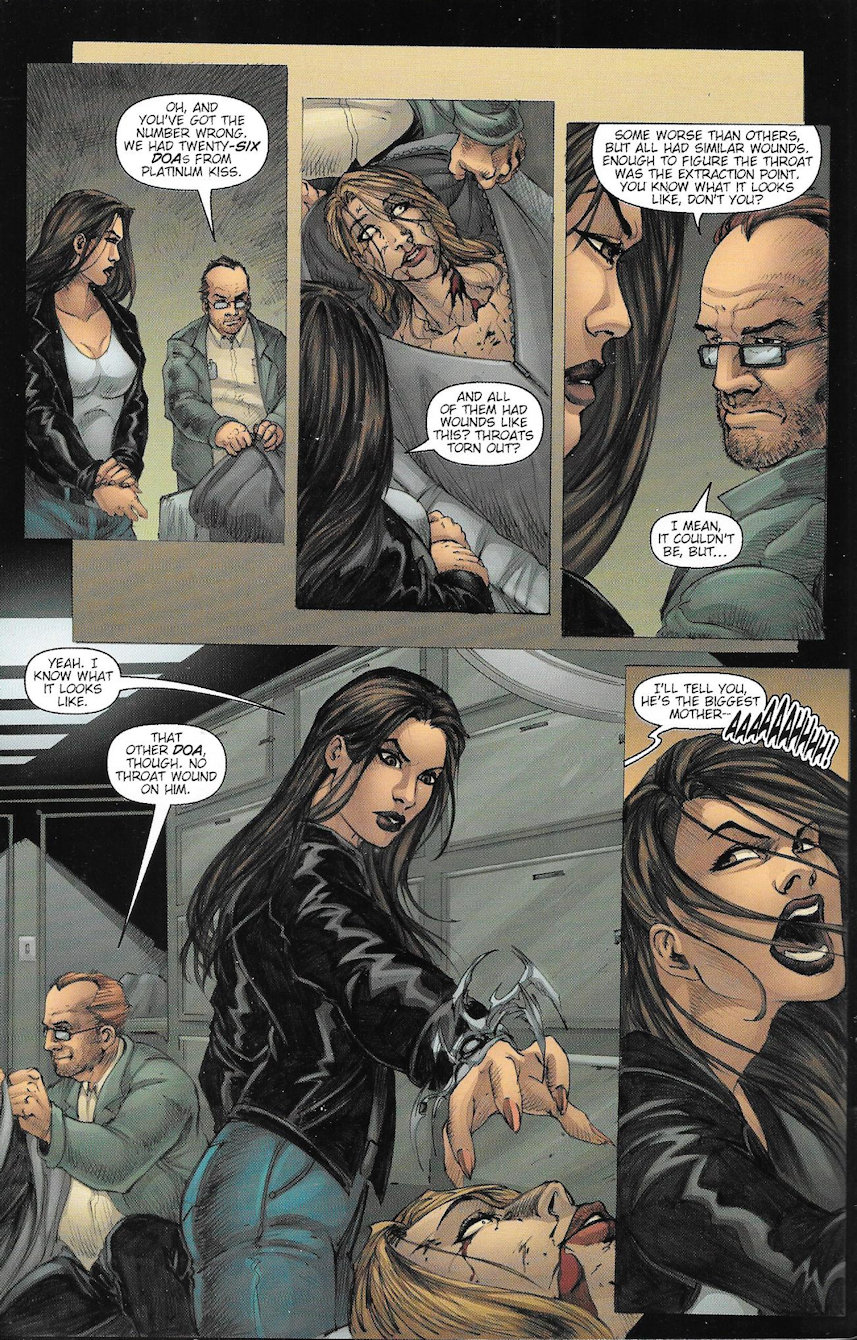 And that turns out to be Frankenstein, who rips through the wall and breaks the guy’s neck. Also notice they guy pees himself and I don’t know what is wrong with him, because most of us don’t urinate tan paint. What kind of pee soaks through dark colors in such a way that they make the OUTSIDE of the pants turn orange? Frank killed the guy, but don’t kid yourself. He would have been dead in a month from whatever is going on in his kidneys. 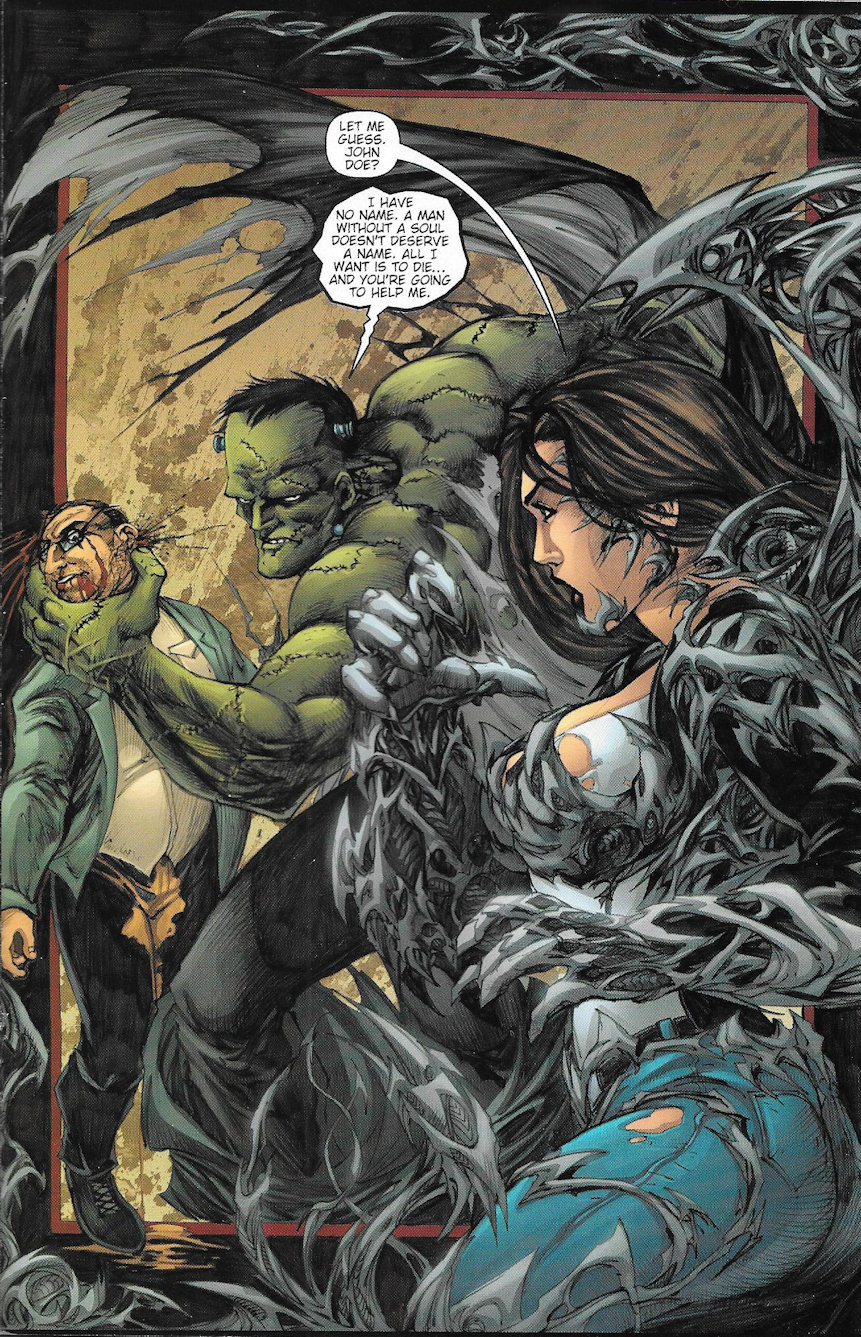 Anyway, Sara “Venom’s out” and we get four pages of fight scenes… 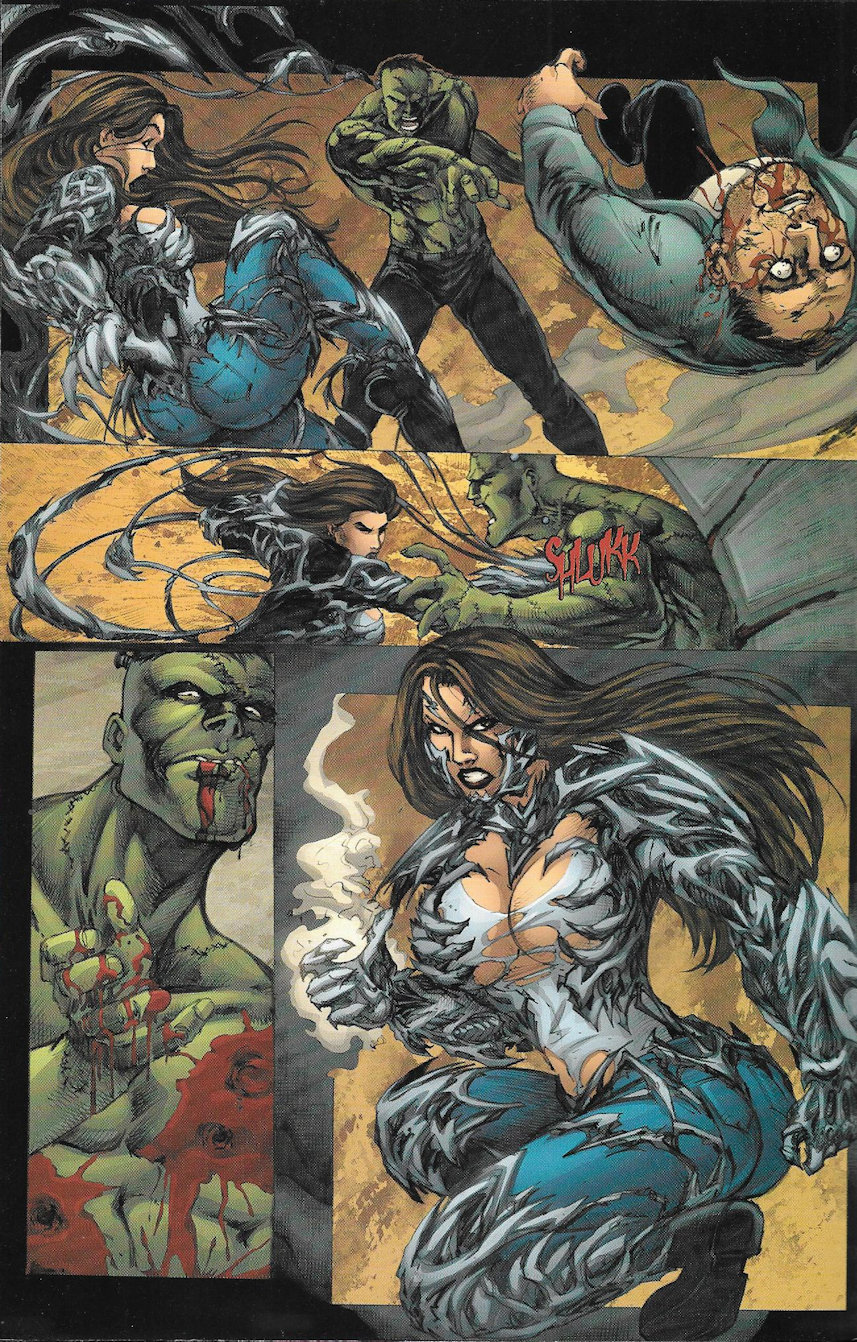 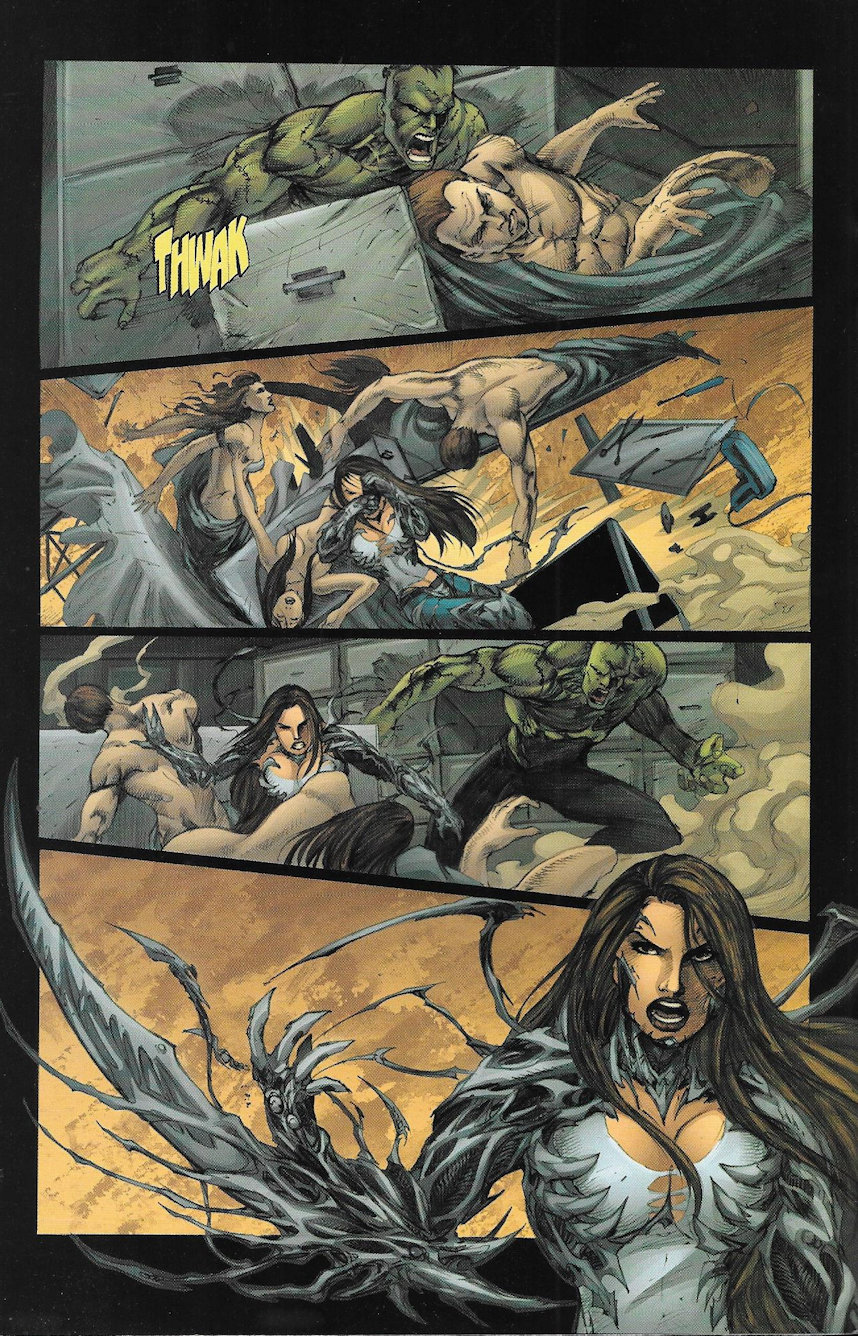 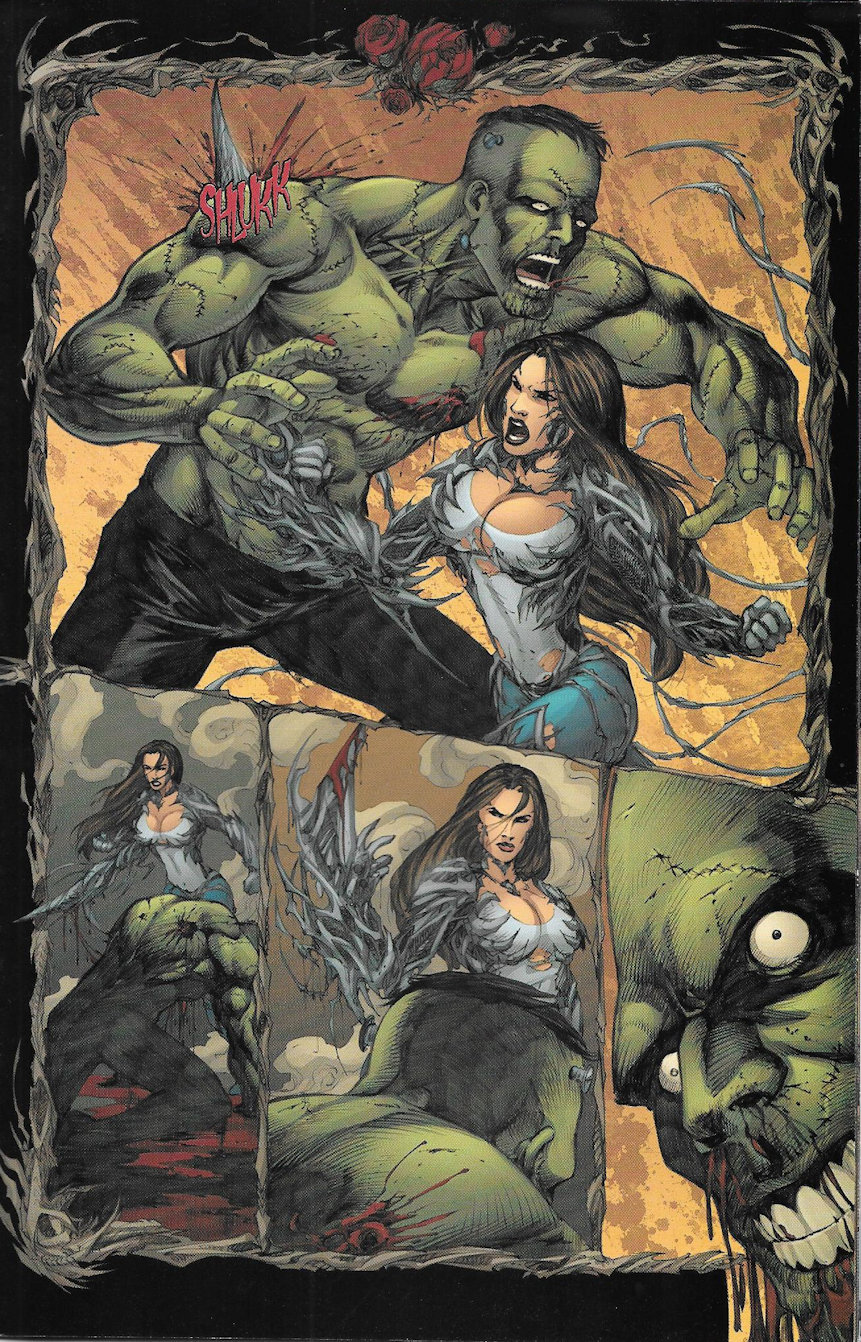 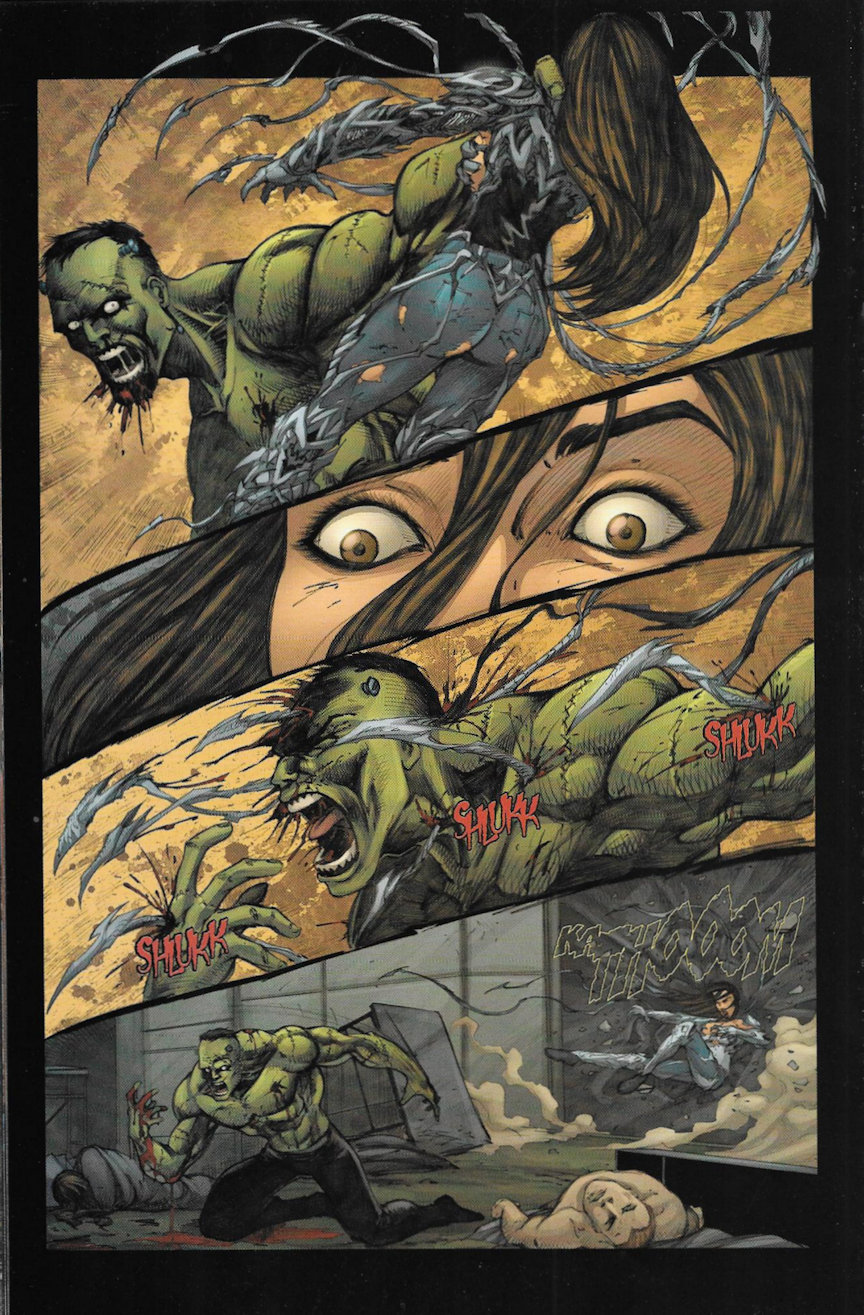 And then Frank admits he just wants a bit of the Witchblade, doing something to break a piece off. 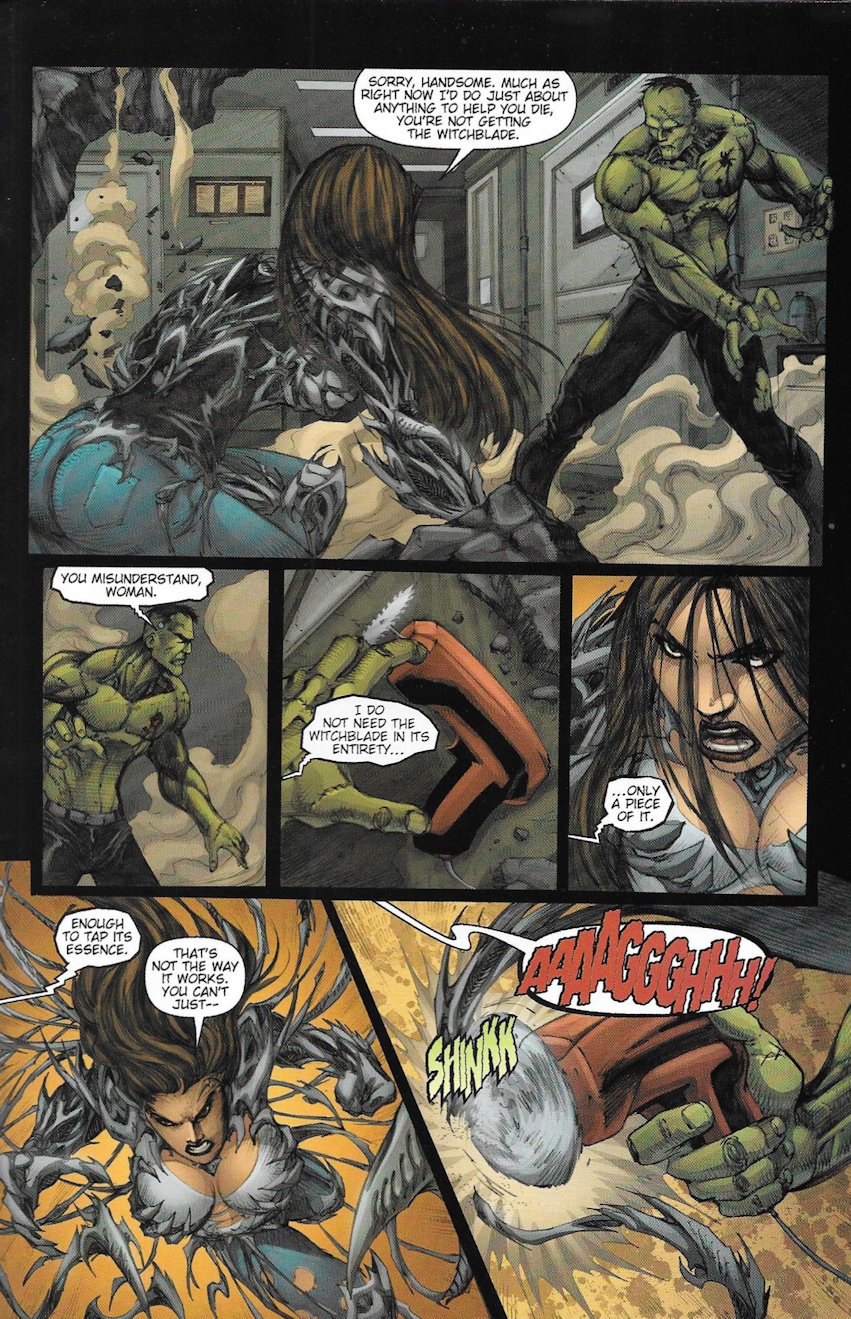 This creates a feedback response in Sara and she curls up in pain. Frank takes his prize and meats up with The Vampire-dalena and they stroll off into the moonrise to give Dracula his little present. Appears they are working toward making the night eternal or some such. 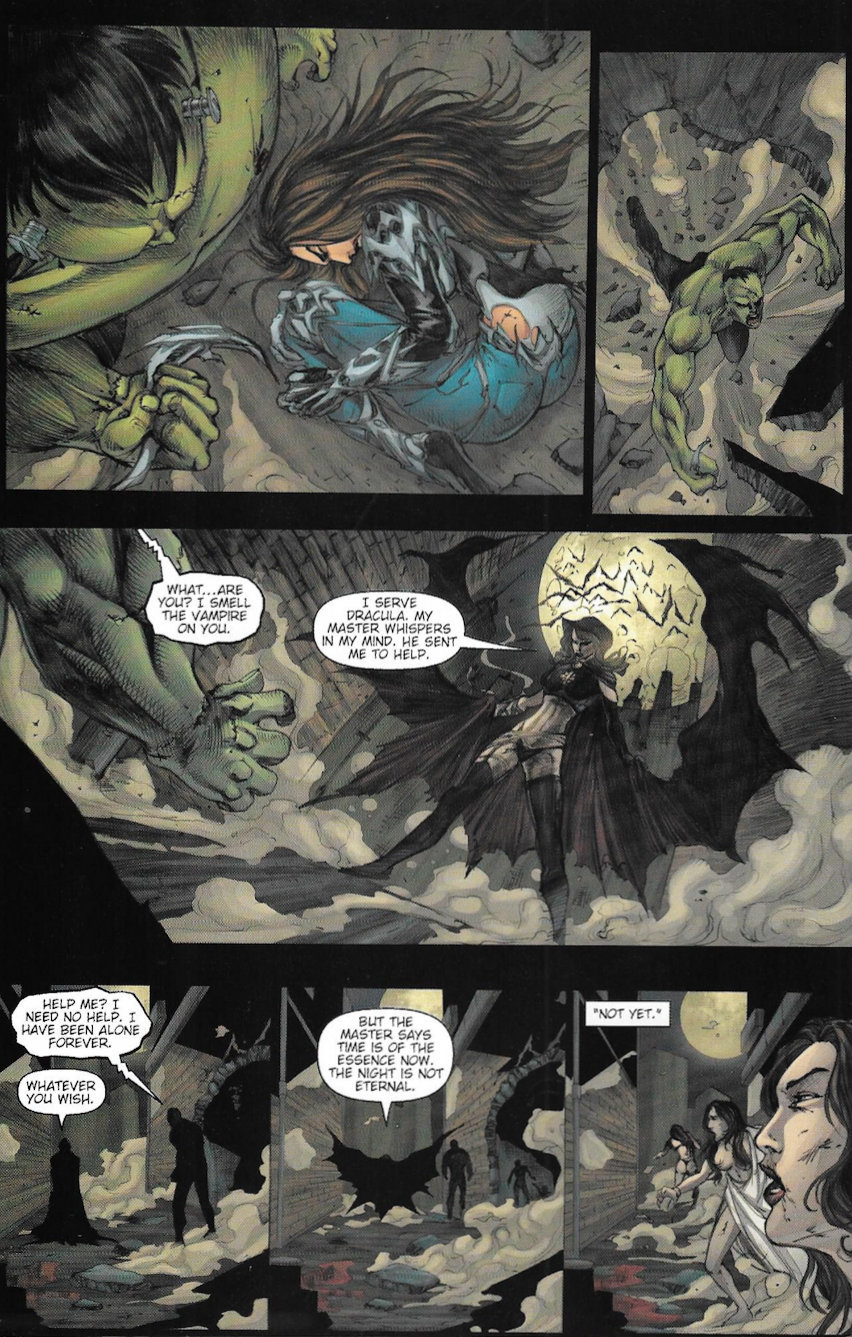 Meanwhile Sara comes to just in time for our band to start getting together. Lara Croft and Jekyll pop in to hear Sara’s tale of how a dead guy took a chunk of her superweapon, which allows Jekyll to be all cryptic and stare out from the corner of the panel. All the while musing… 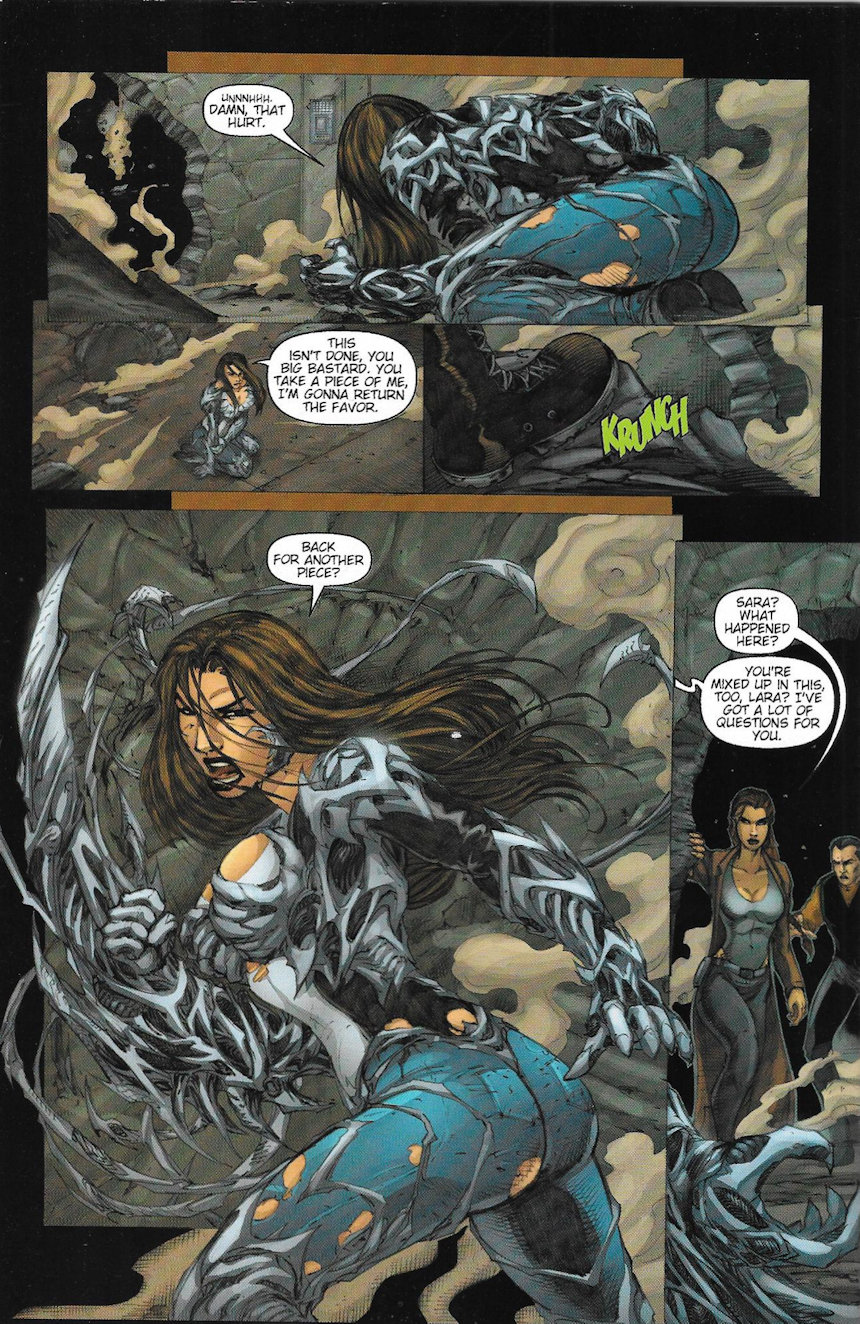 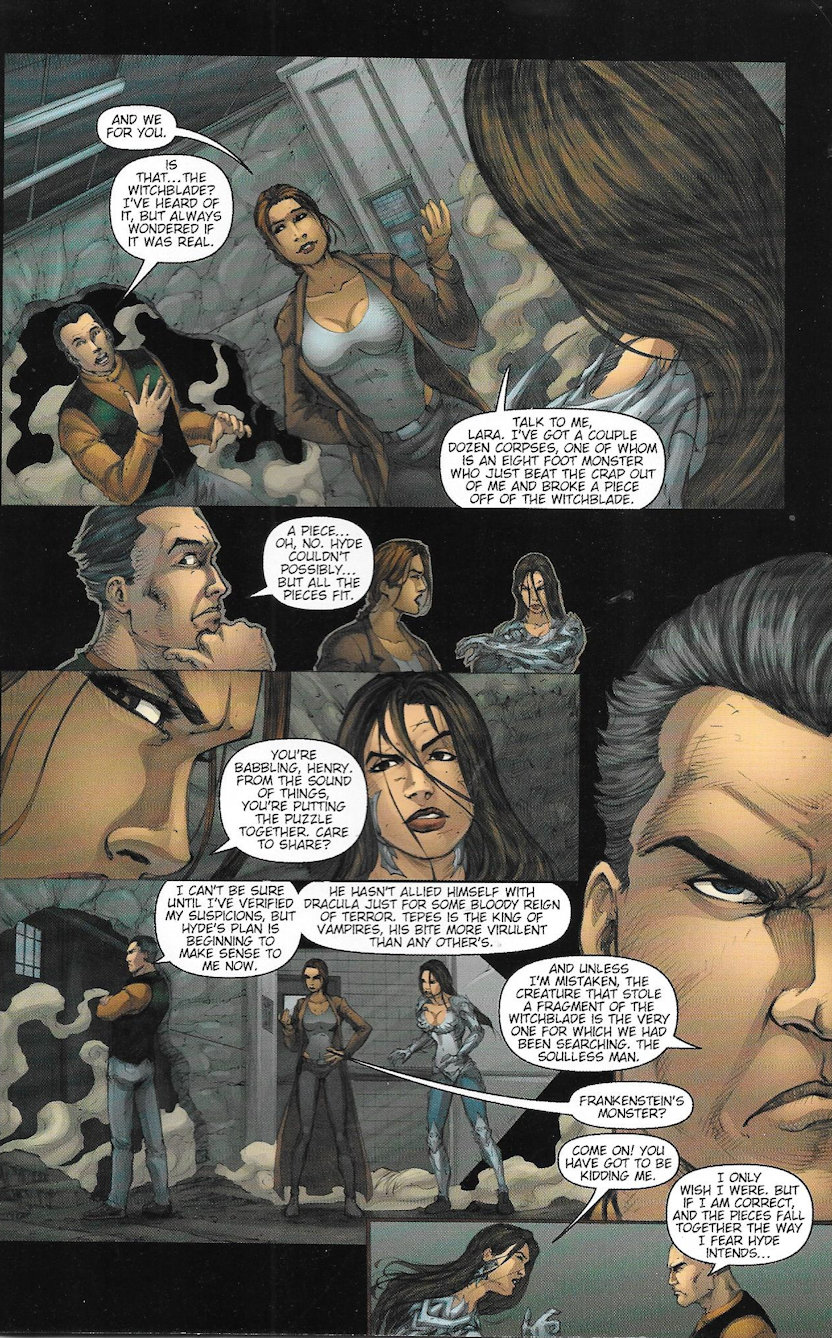 …as a lead in to the exposition from our Dracula and Hyde about what their true plans are and what stakes are being set (before stakes get stuck through hearts, I’m certain) in the next conflagration-ending issue. Appears Hyde is using all these elements to create a potion that makes vampires… 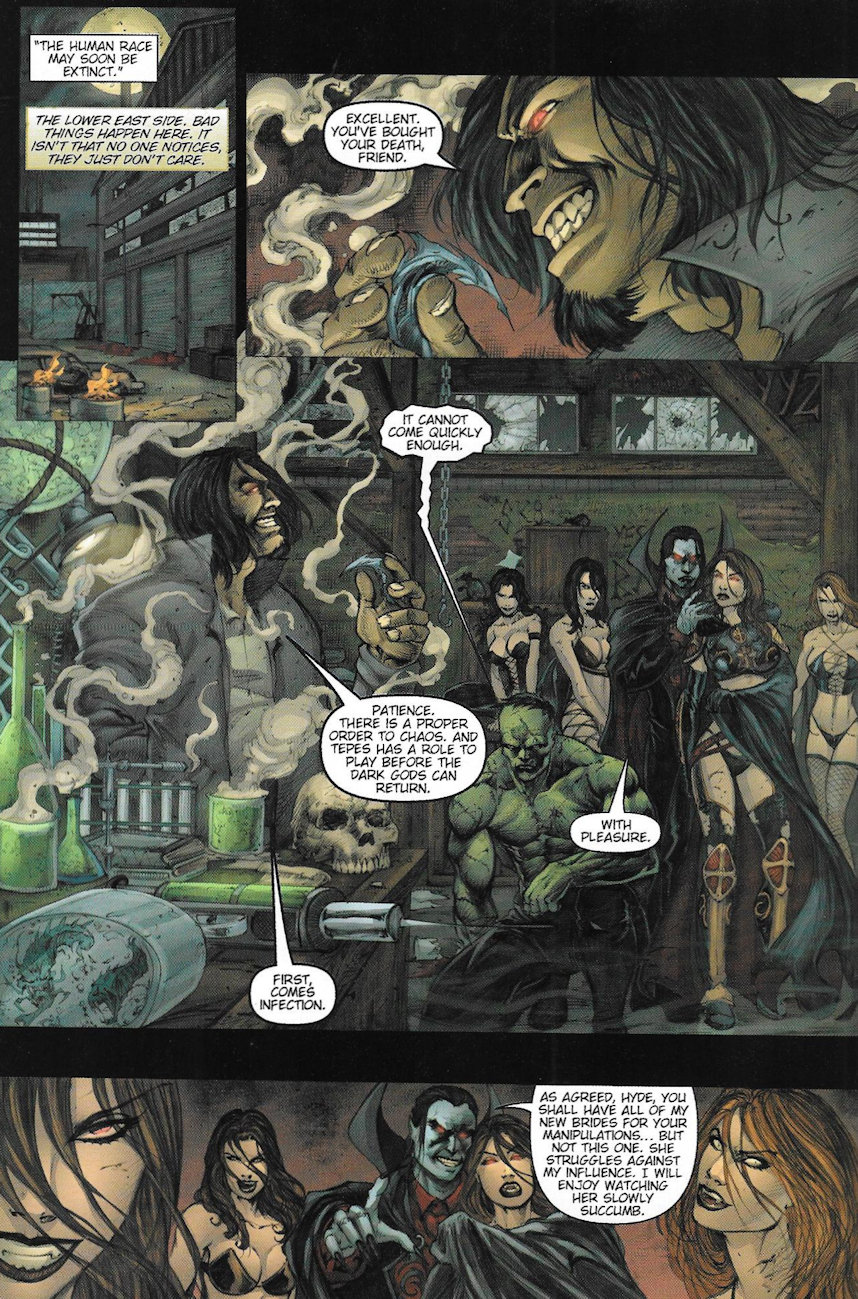 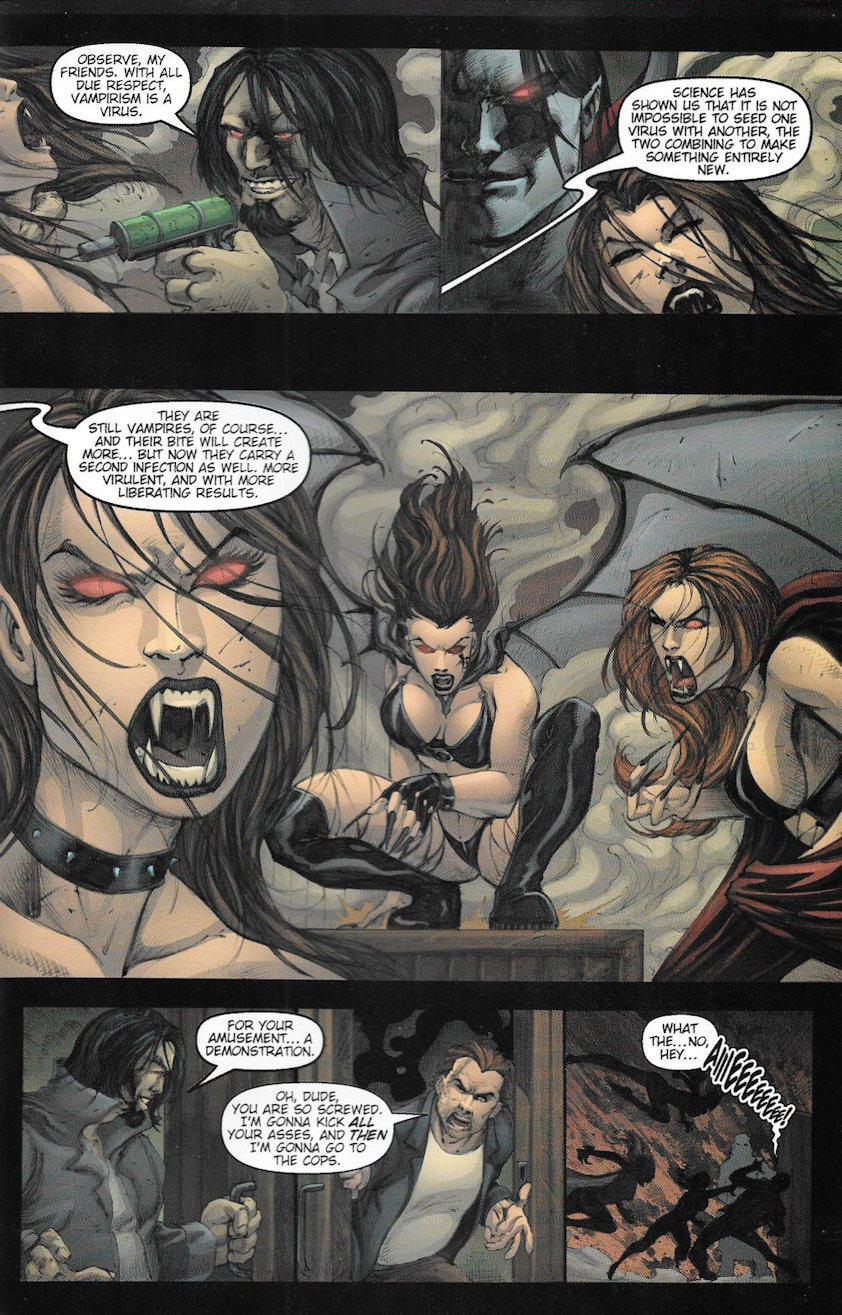 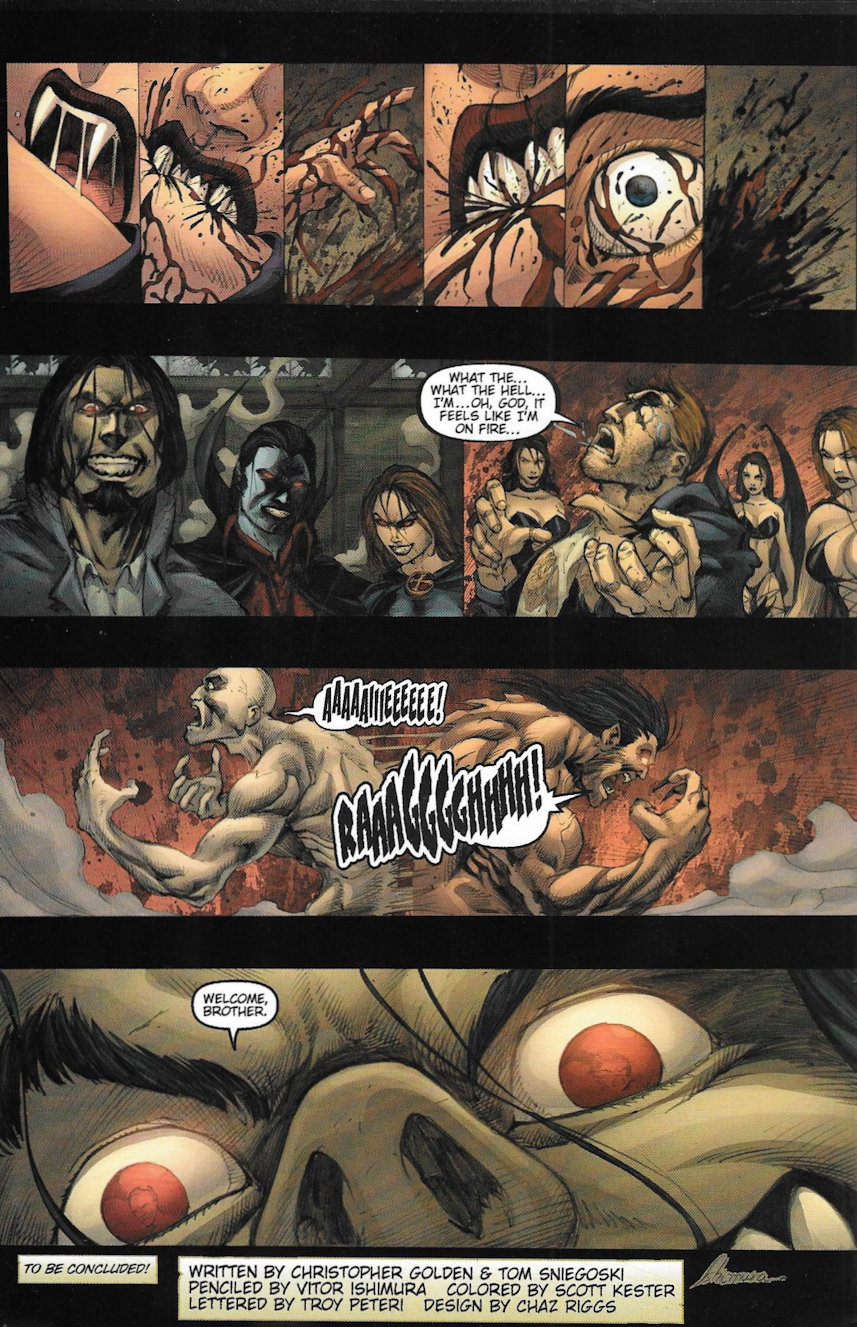 …Do THiS…wtf? I guess it splits people into an evil vampire and a…bald, hairless Captain Picard? What. Does. This. Do? I can only make assumptions as I am NOT digging more of these out of the discount bin. My thought is it’s transporter-failure Kirk: one side emotional and a vampire, the other side logical and a human. Hyde’s final words support that conclusion.

Anyway, that’s the end of this one. I believe The Darkness was up next to face some classic monster, but no matter who got next shift there was certain to be a lot of side battles with the other “Top Cow Universe” characters. Lolz. Later for you, Top Cow.

Posted by SonOfCthulhu at 2:33 AM