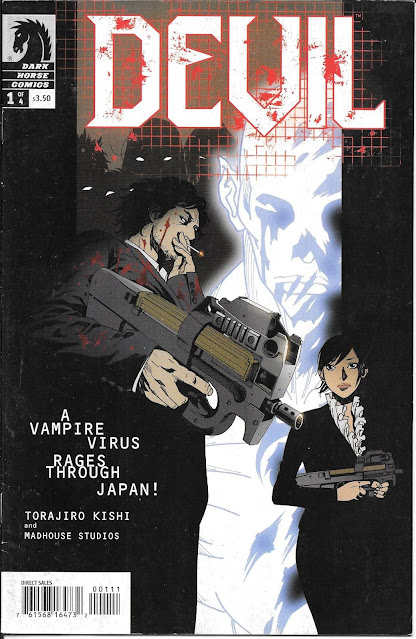 This one sneaks in due to the title, but…

This one shouldn’t be in the “goes to Hell” pile, because it’s about a vampire virus and NOT about the actual devil. However, it snuck in here and given that Halloween has its share of vampire motifs associated with it, I’m allowing it on a technicality.

Also, because I was thoroughly unimpressed with it and need to warn away potential readers.

Devil was a four issue series put out by Dark Horse Comics about ten years ago. Unsure if it only got the four issues because it wasn’t well-received or if it designed as to be that short. The series is written and drawn by Torajiro Kishi, and he does neither very well in my opinion. His prior work was a relationship drama about two young adult girls trying to come to grips with their love lives and self-esteem issues. Maybe he should go back to that.

I say that because I am thoroughly unimpressed by Devil. What little characterization there is does nothing to create empathy or investment. The villain’s motives are unclear and his powers shift from scene to scene in such a way that we don’t know if there are rules for how they work or are just “whatever the writer says for now.” In short, this bored me and I hesitate on a second read-through to write the review.

But because it is you, dear reader, I’ll make the attempt.

We begin BEFORE this page, with a storytelling device I HATE. On the back of the cover page is a full paragraph telling us where our story begins. Telling, not showing. Like opening narration in a movie, this is the most ham-fisted technique for force-feeding the audience motivation, setting, and what’s at stake. It belittles the storytelling devices of generations and whenever I see it, it pisses me off. But enough, I guess. 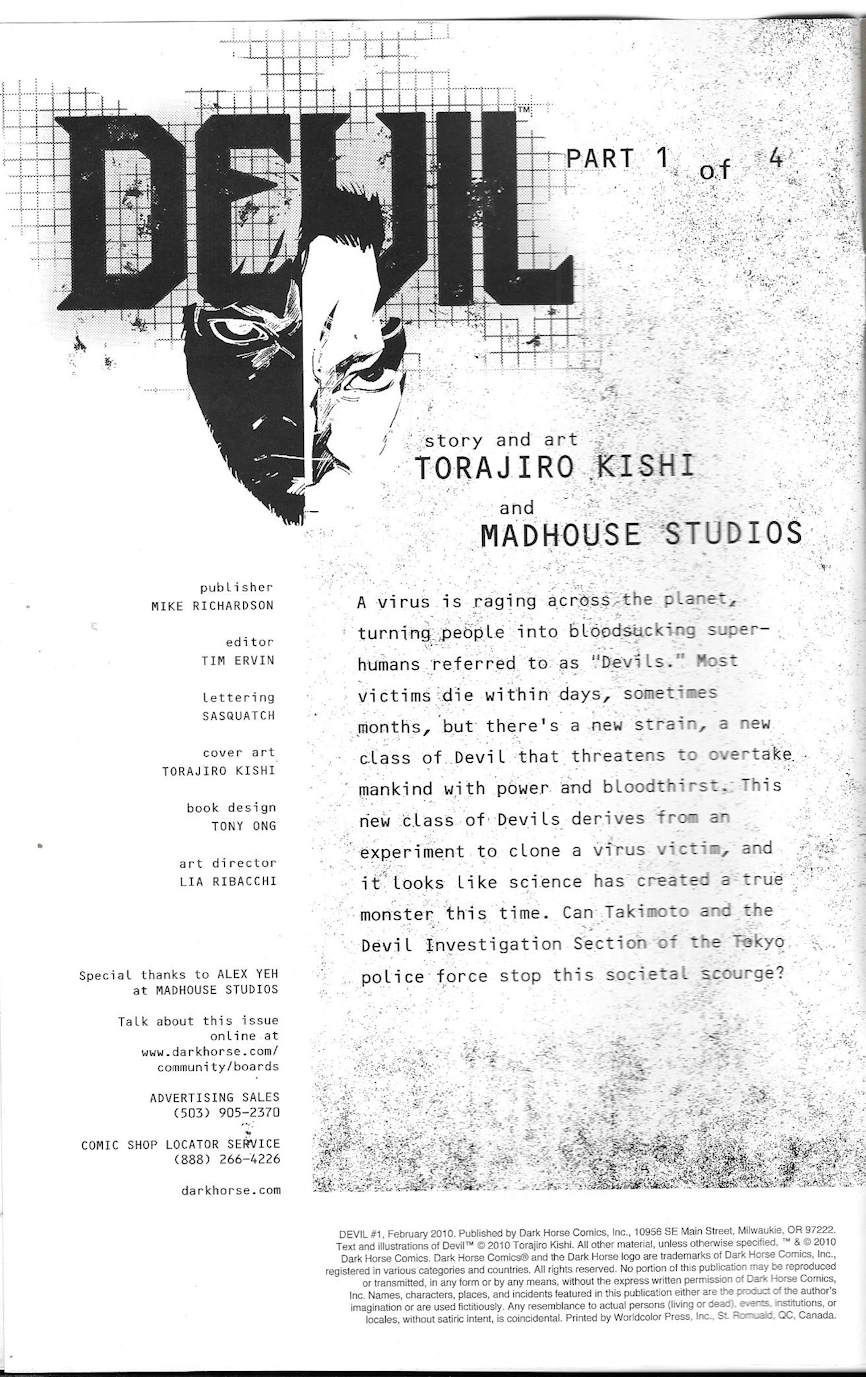 The paragraph states that there is a vampire virus turning people into super-killer bloodsuckers referred to as “Devils.” And if that wasn’t bad enough, now there is a  new strain of the Devil "coronavirus" that comes from a lab experiment in cloning a virus victim that is somehow worse, but the author doesn’t go into specifics. But, we are super lucky because Takimoto, his ever-lit cigarette, and the Devil Investigation Section are on the job to save us. Take it away, Takimoto… 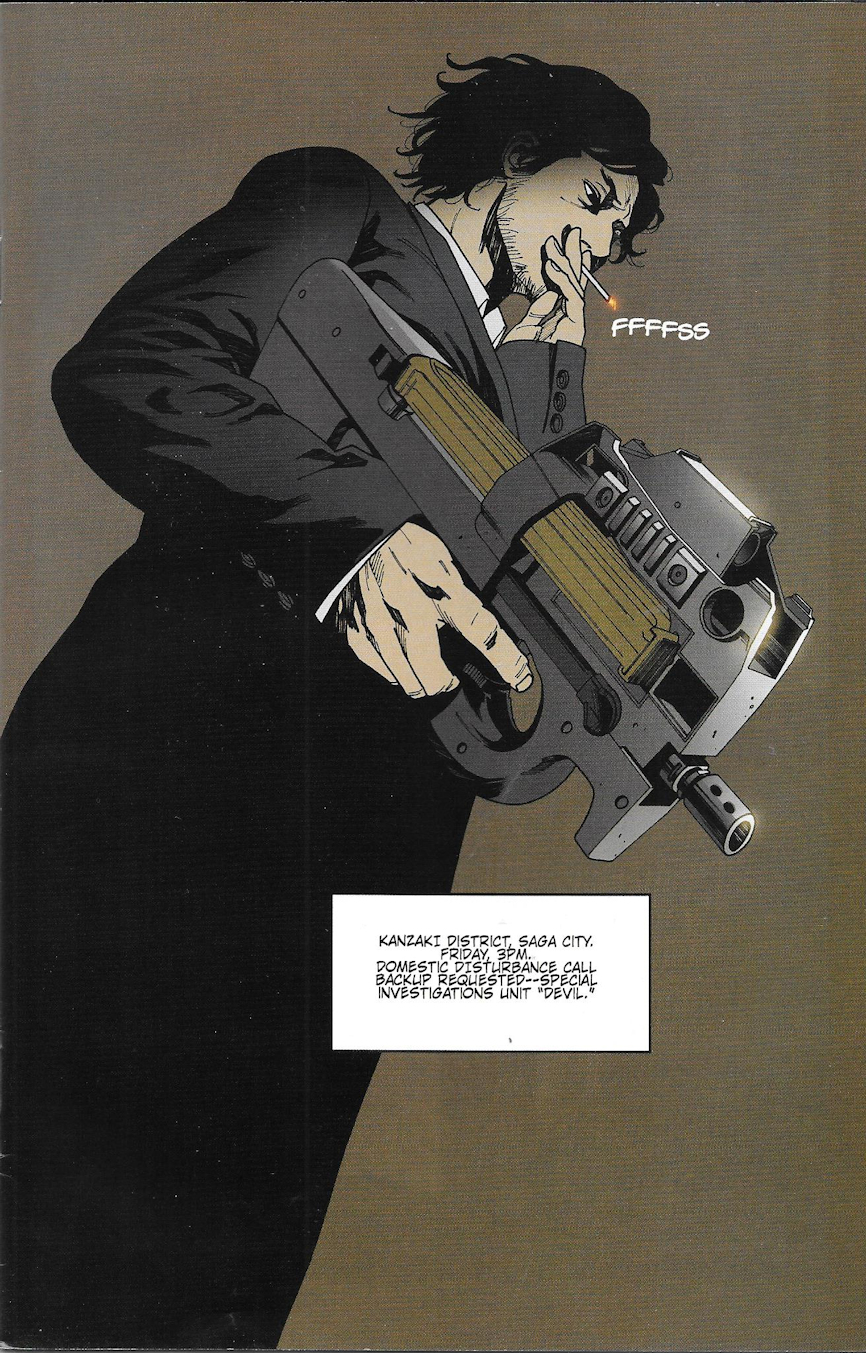 And this is picture on the facing page, all Dutch-angled smoking from a low perspective that does nothing to inspire confidence in what the artist is attempting to convey. Not to mention the odd proportions on that gun. And the fact that this is page one and we get little-to-nothing in the way of character development, even from the text box. Hell, I would settle for some character narration to liven this up…but nope.

This is Takimoto, ladies and gentlemen. He packs weird heat and smokes…and that’s all you get about him. 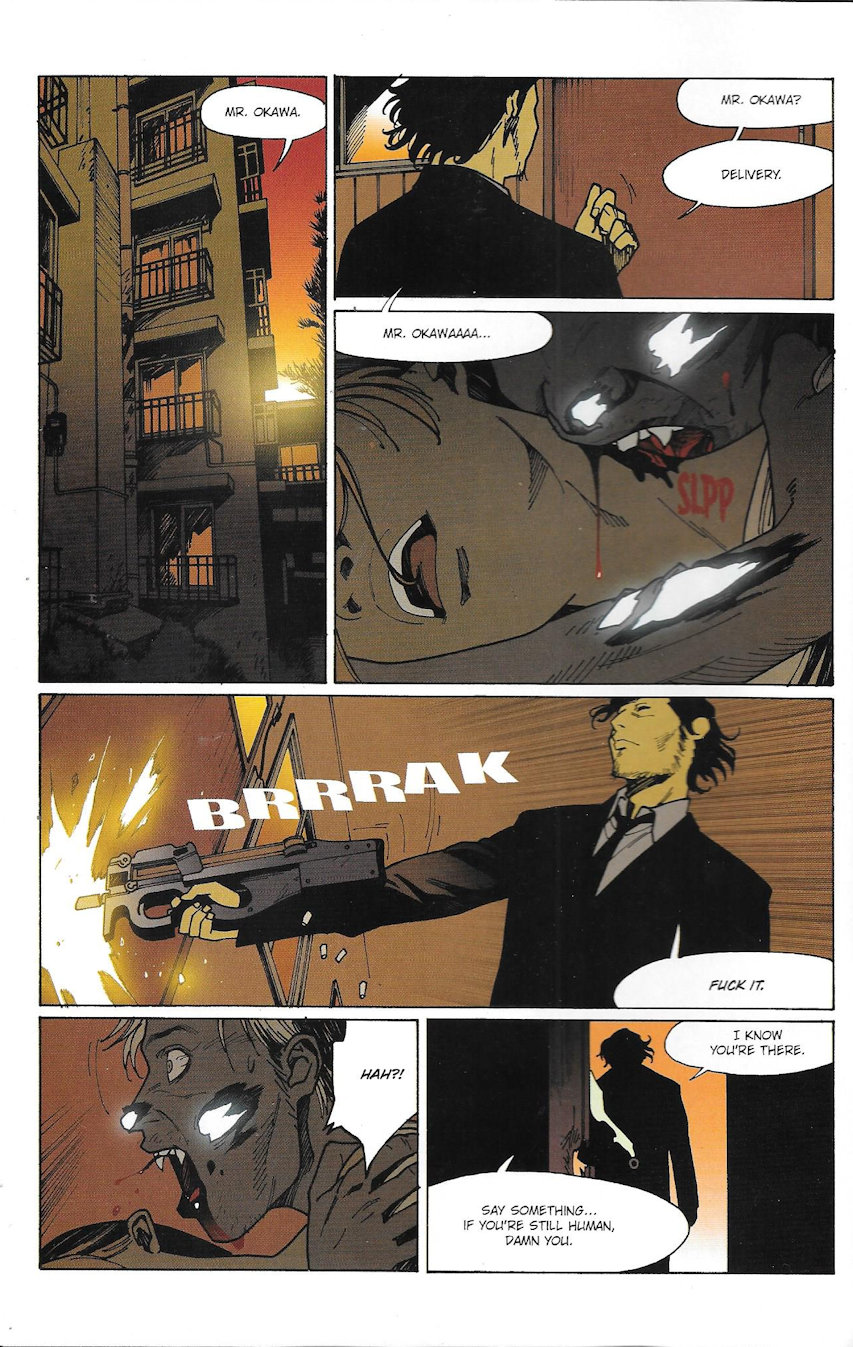 Oh, and he is an impatient “cowboy” who shoots first and figures out who the bullet hit later. Starting with his super-poor ruse of being a delivery guy to his blowing through the door to his then weak assertion that he’s not even sure the Devil virus person is in this apartment…I mean he says he knows he’s in there…but asking if the Devil perp is still “human” kind of undercuts it a little. 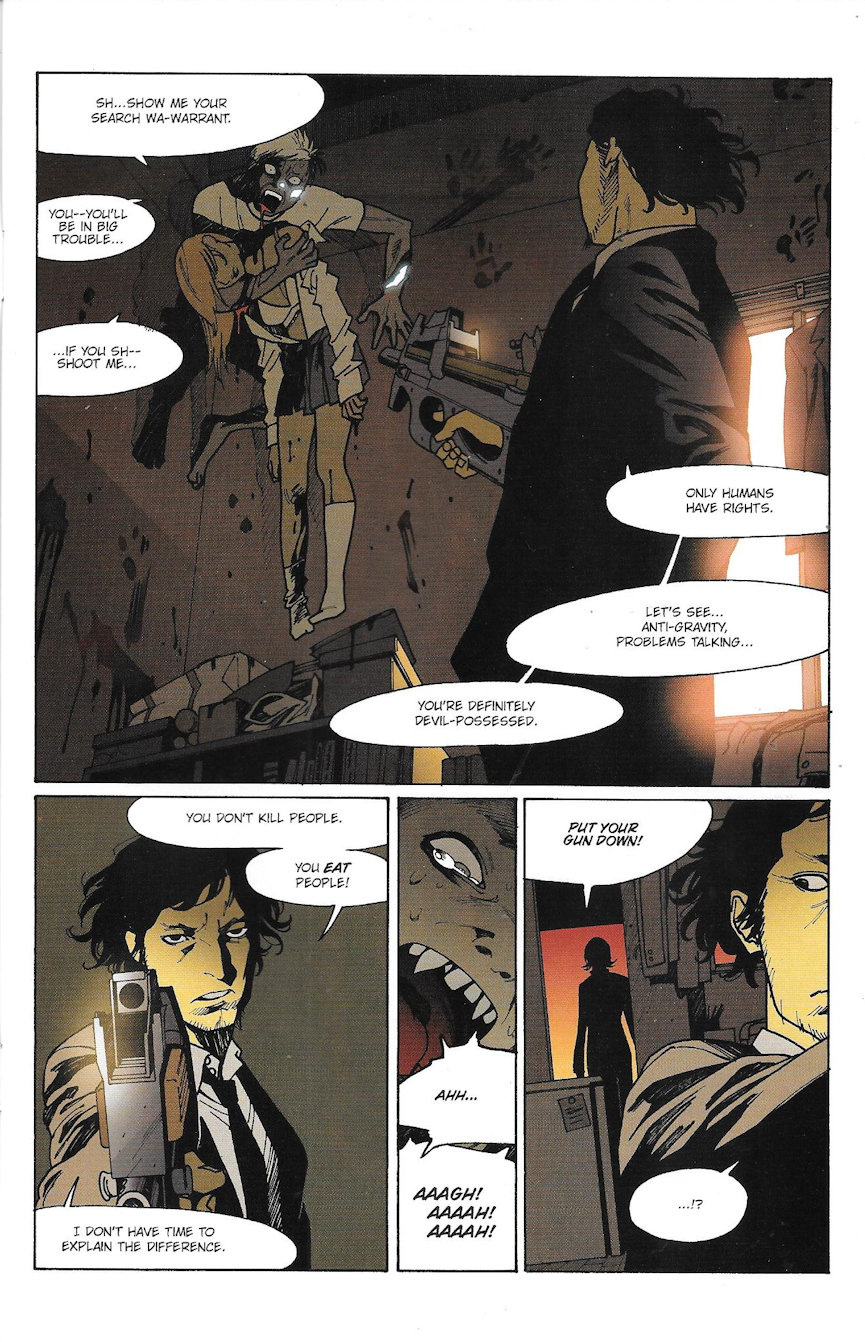 Since this is a comic book about Devil-virus people and not about the dangers of police overstepping their bounds, of course the bloodsucker IS in the apartment and he’s hanging around the ceiling, snacking on a lady. He appears to know his rights, and Takimoto is about to ignore all of them and shoot him. When SUDDENLY… …In comes the lady cop who will be the thorn in Takimoto’s side, spouting rules and regulations. Our Devil-boy takes it on the lamb and Takimoto, going against direct orders, pops his head like a tick. 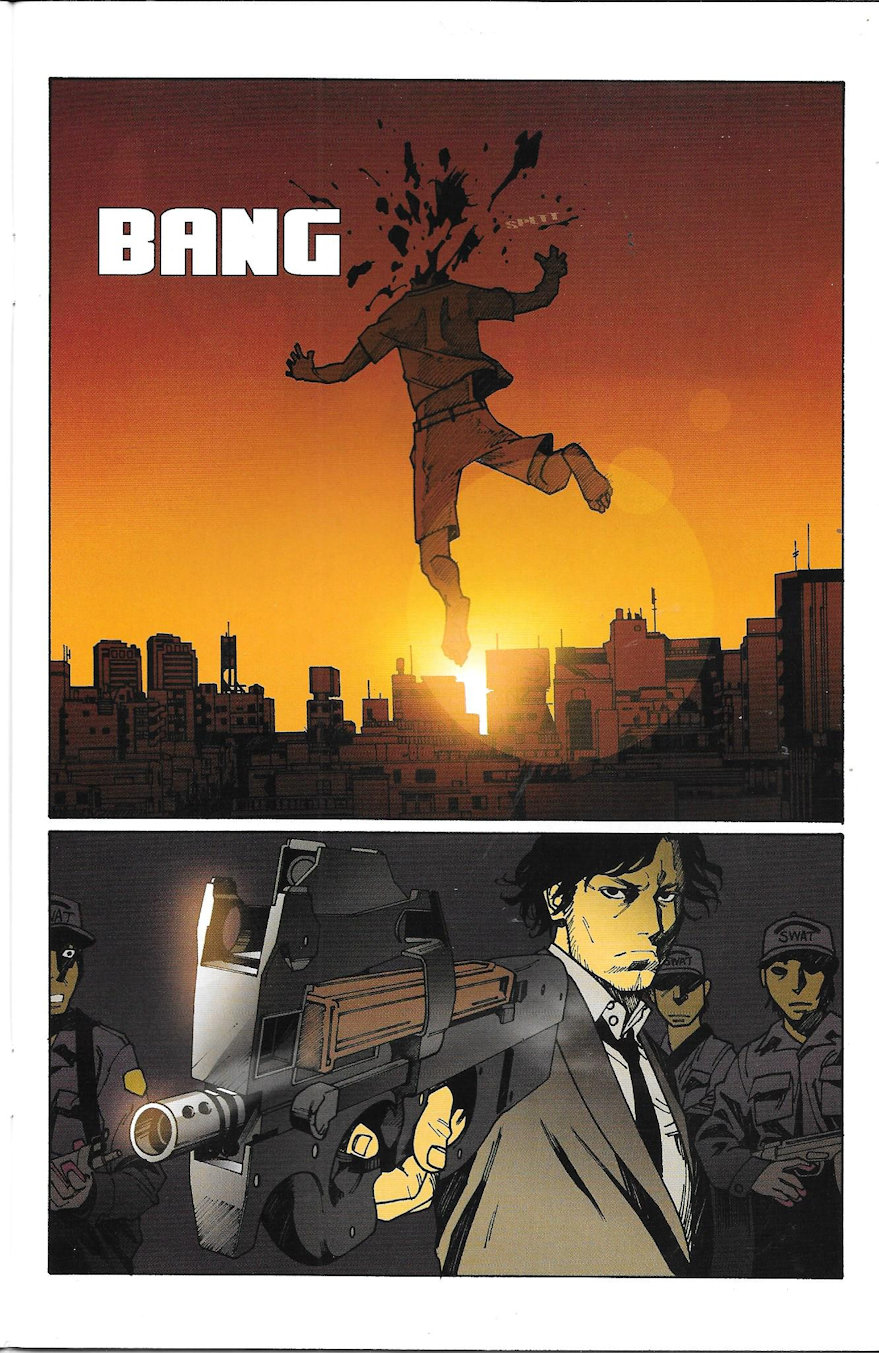 Which leads to a set of narrations boxes which again explains the story in a very “tell” manner, doing so while our two protagonists first brood and then argue. Which is an odd stream of conversation as our lady detective Migiwa sometimes treats Takimoto as a subordinate and sometimes as a superior. I’m not even sure I care, but I’m glad we move on… 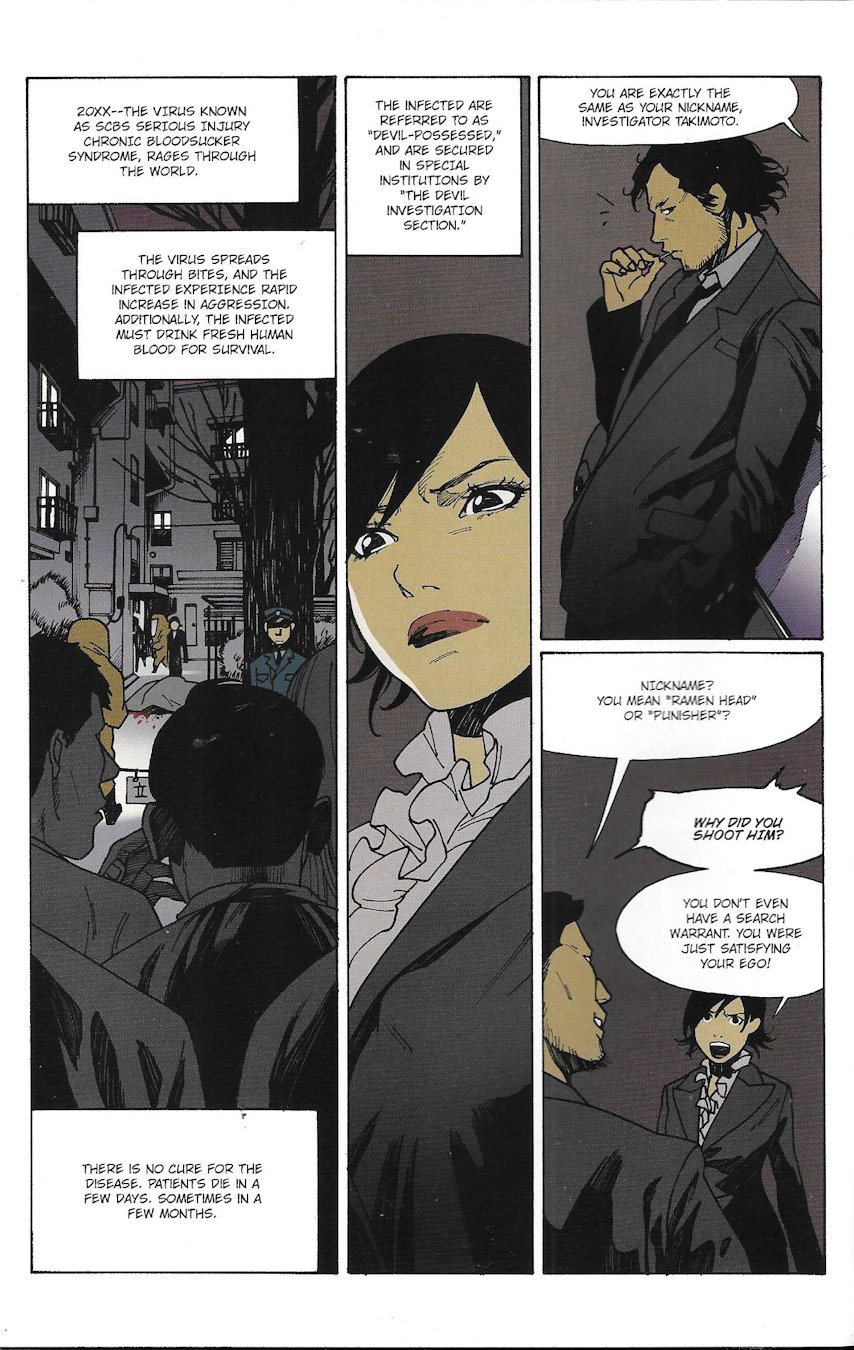 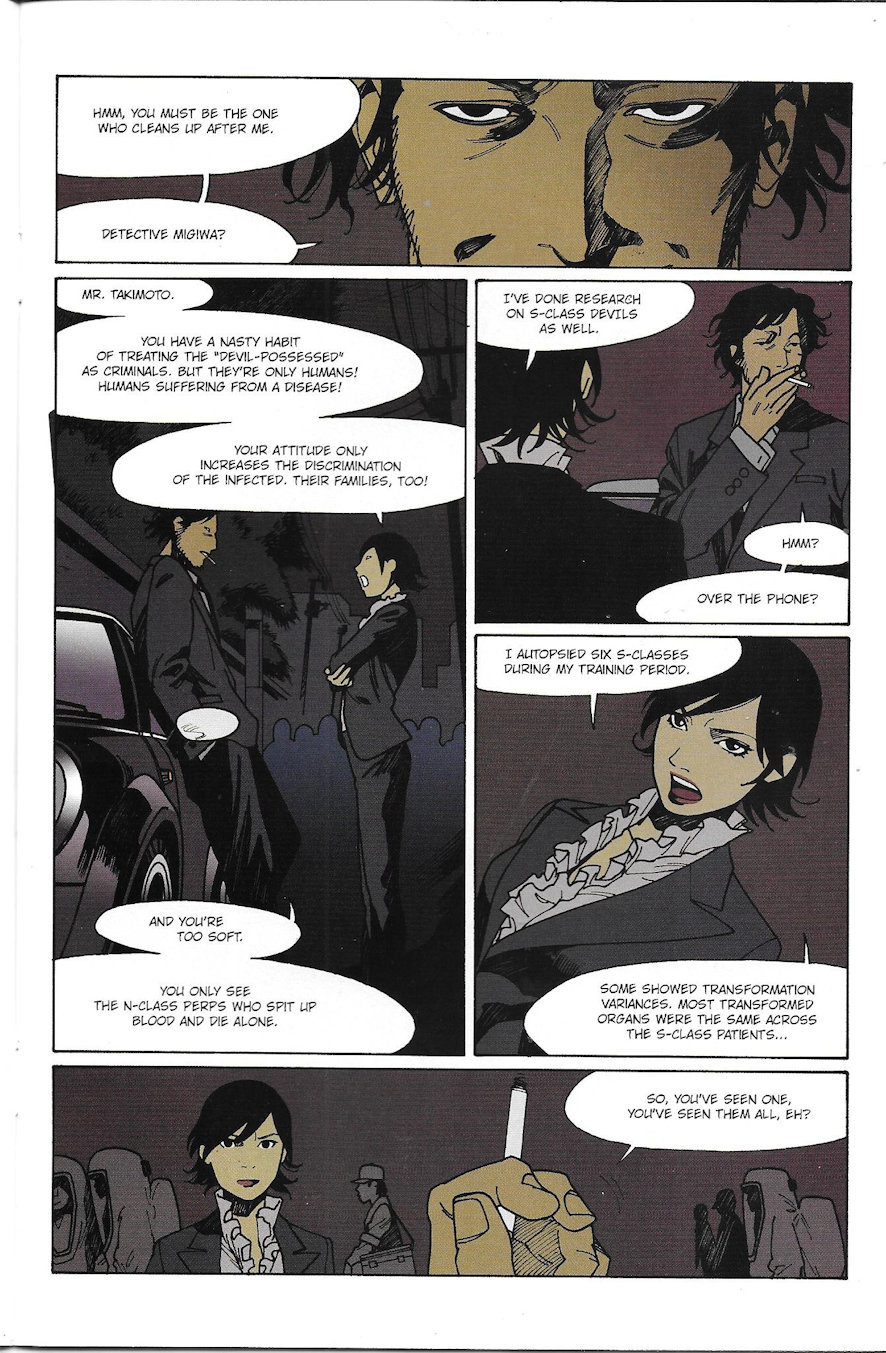 …or I would be if I understood these series of panels. Let’s see, a cop pulls over a motorcyclist for helmet violation. He has her in the backseat of his cruiser while writing a ticket. Devil-infected dude wants to do evil things to them. Cop goes out to confront Devil-infected. Bad move, copper! Cop doesn’t have glasses. Girl doesn’t have glasses. Some unseen character who I guess is cop’s partner and has been sitting unshown in the cop car up until this moment says some bullshit about how he must be an “S-Class” Devil because he’s glowing. Glowing Devil does bad thing to cop 1 still outside cop car. 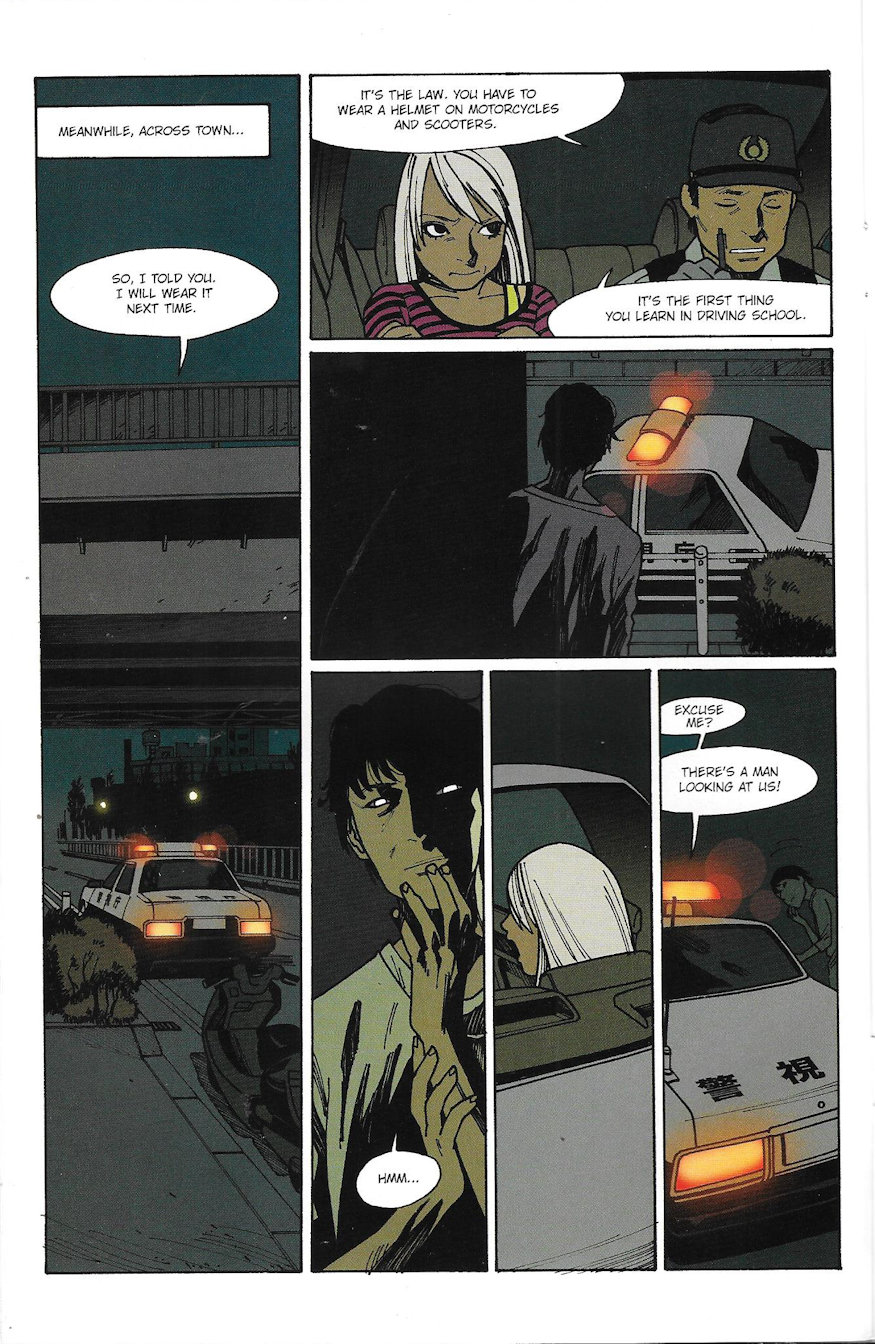 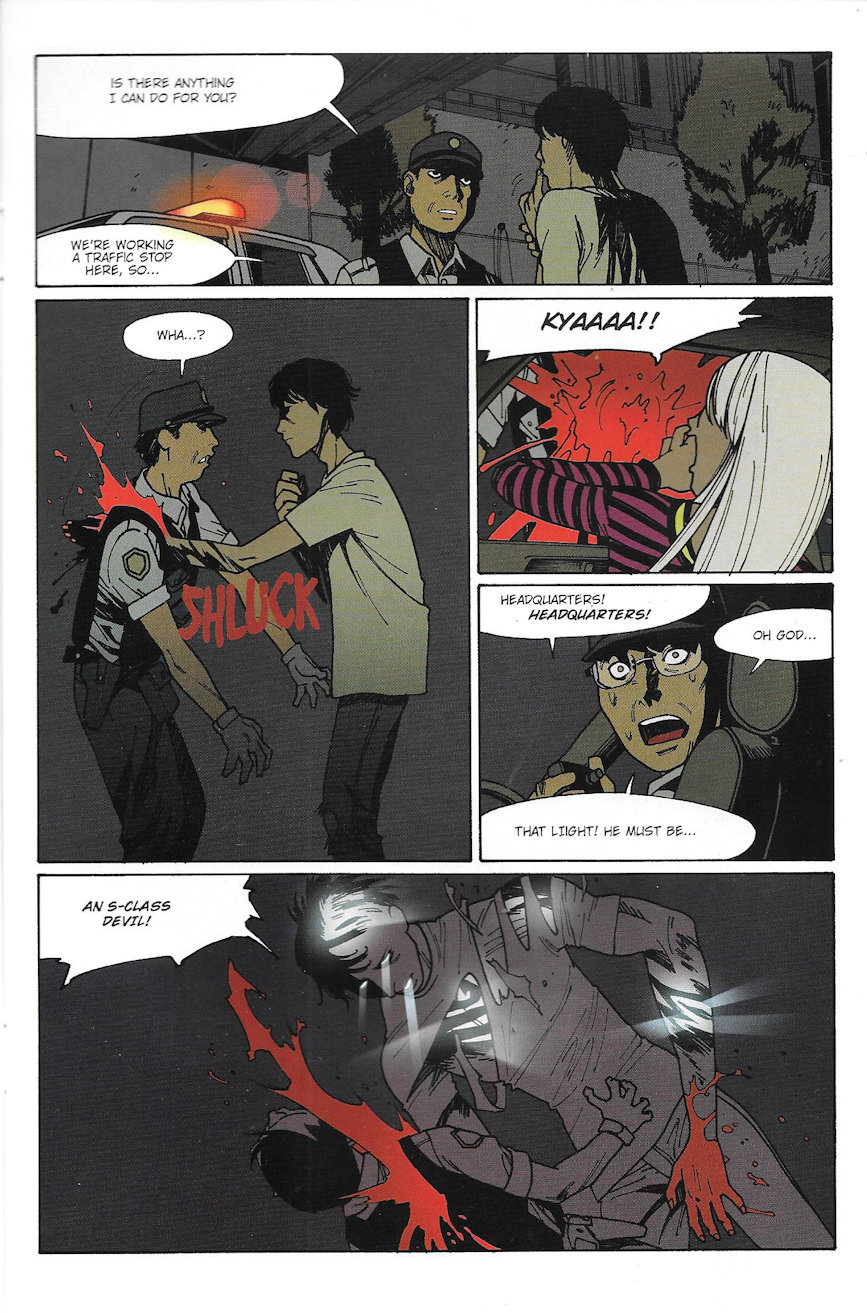 I think that’s what happens, anyway. And no idea about the S-Class crap. Book could do with some exposition to give us the lay of the land. Or perhaps an outsider character we could identify with that it could use to “teach” about these Devil things. Instead it just barrels ahead.

We swap back to the detective as she overhears an APB about the S-Class devil and away our heroes go to save the day. 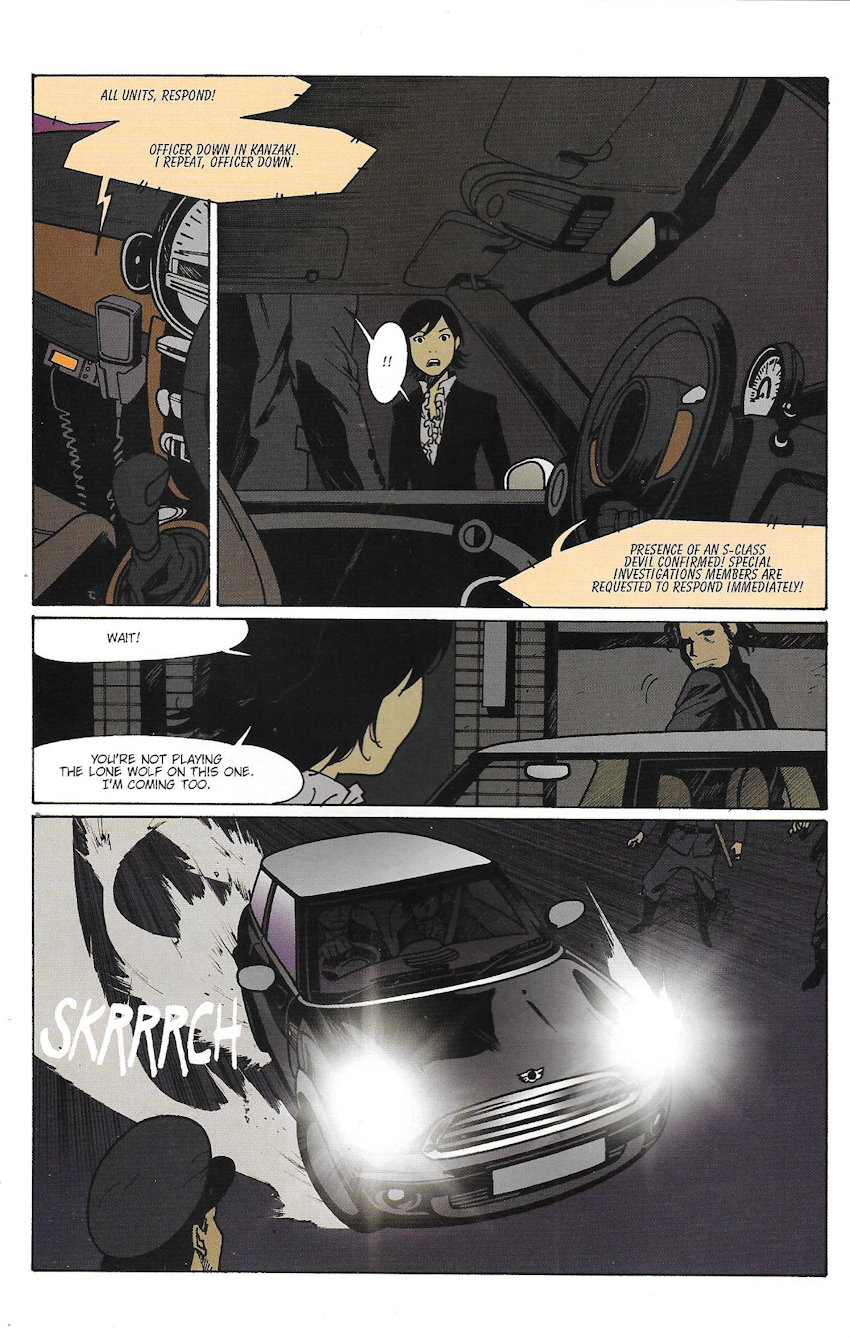 Appears they maybe too late though, as the S-Class has turned into a human glow-stick and killed the motorcyclist. So riding without a helmet does kill you, just not in a straightforward way. 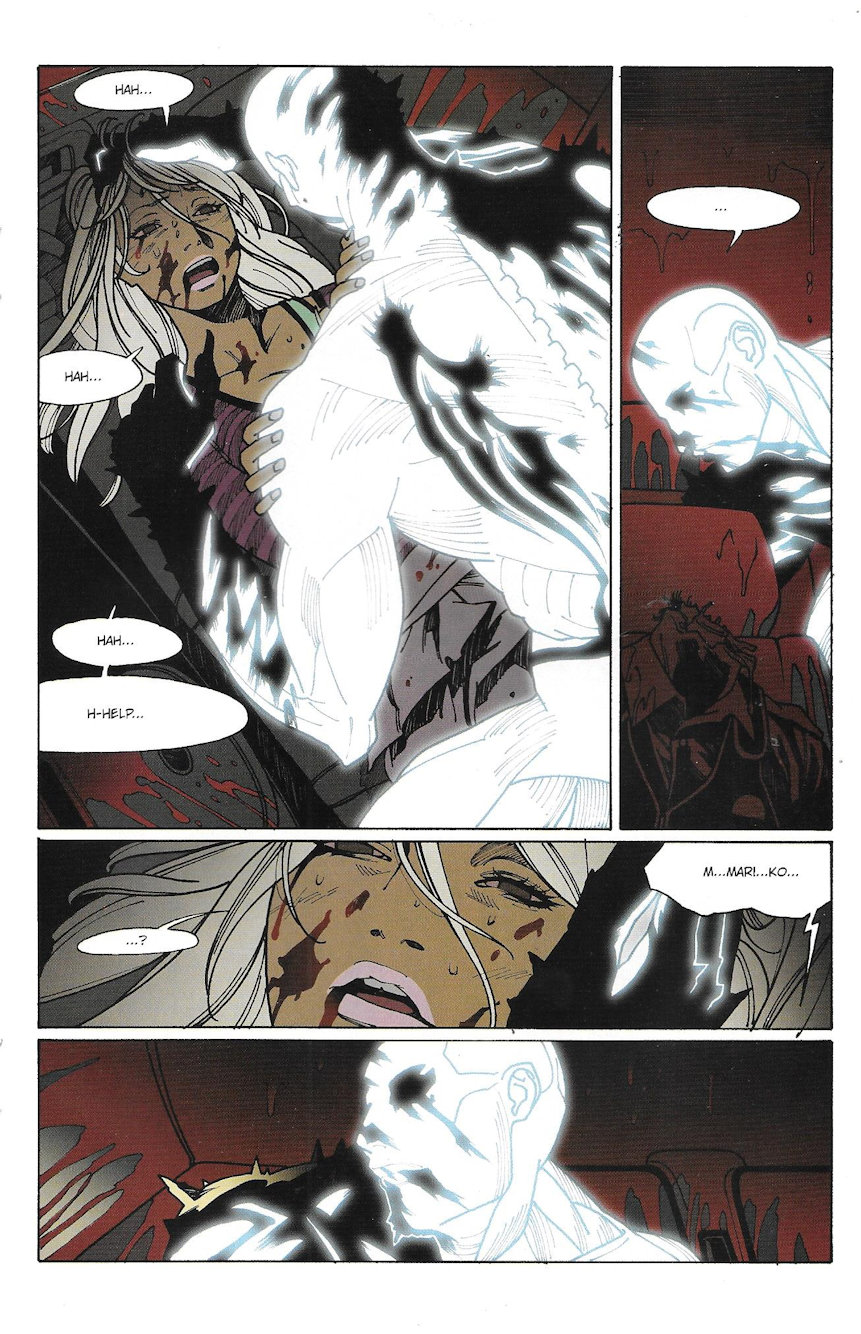 Devil calls her Mariko, who I’m sure is a person important to the backstory of all this bullshit, but no time for that because stupid action sequence!!! 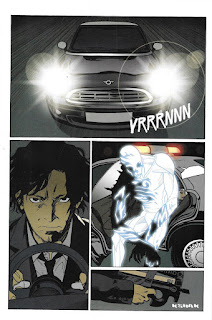 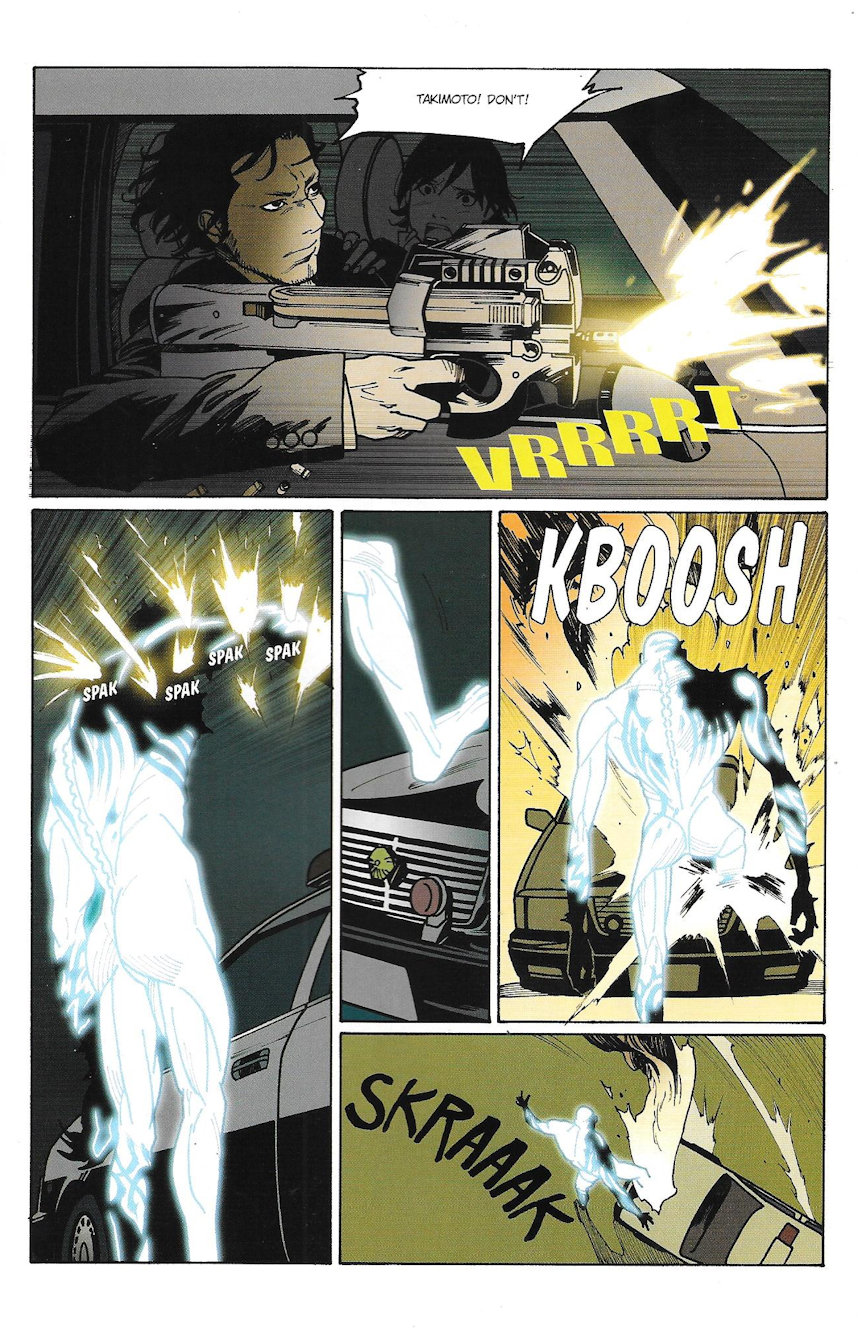 This goes on for far to long with all my manga favorites including battle sequences paced in such a way that you can’t tell anyone’s positions, pointless explosions, text balloons for punctuations, speed lines, and characters stating the obvious (thanks for the tell, but we got the show. How about explaining where the hell everyone is standing instead?) 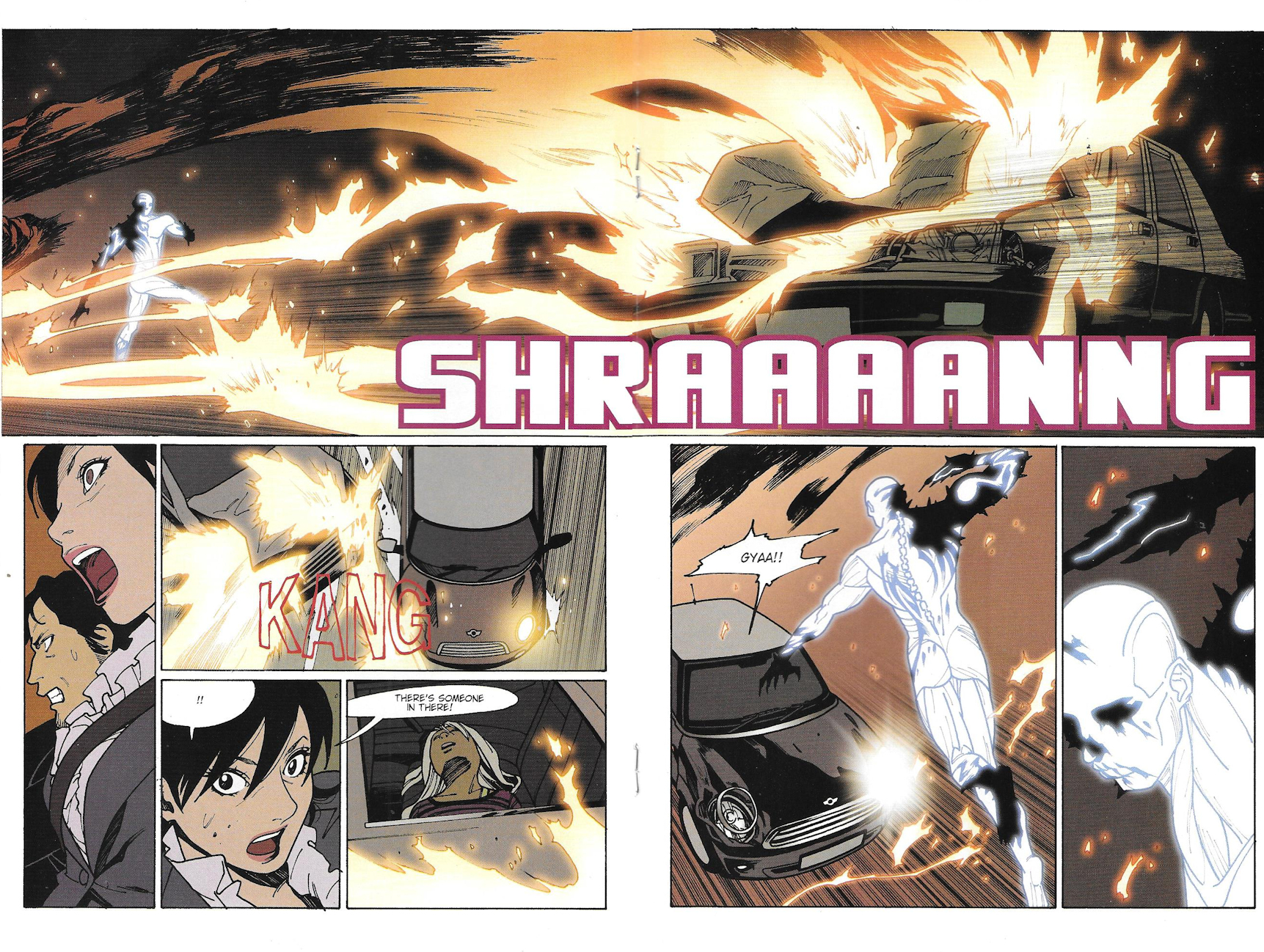 And then we have the hero facing off against the villain who says something cryptic that only they know the significance of, shocking the hero into doing something stupid, like asking if the villain is “x” instead of shooting him in the head, so the villain gets away. 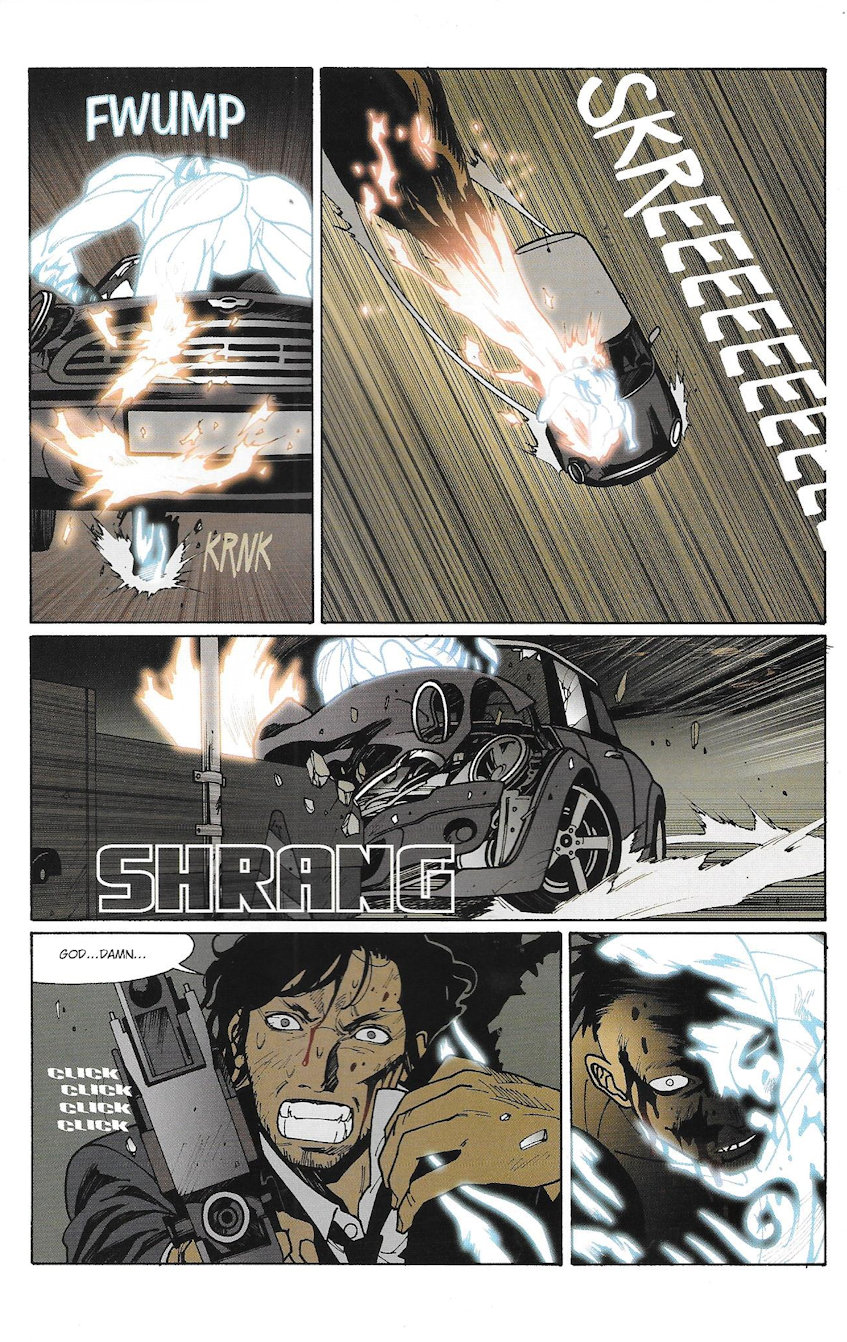 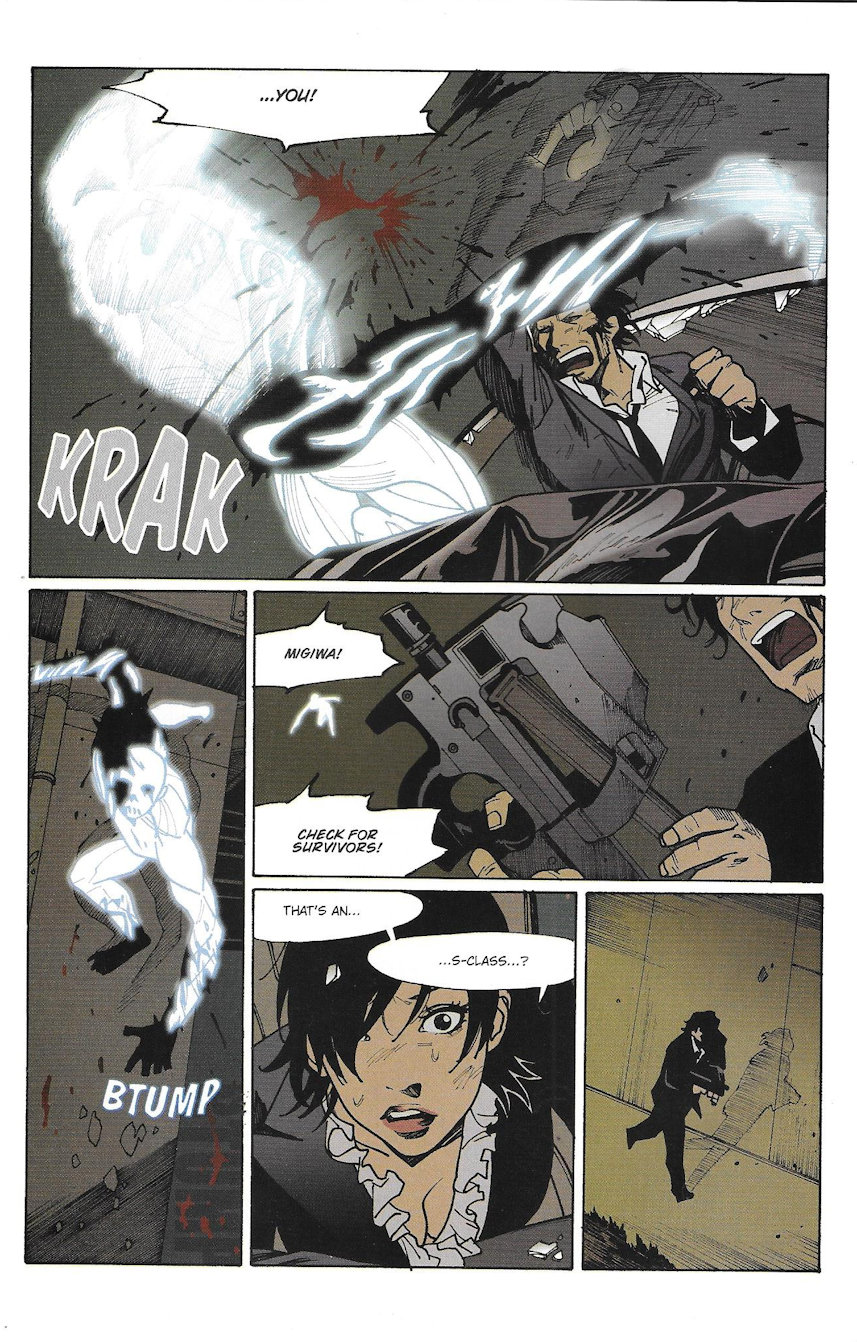 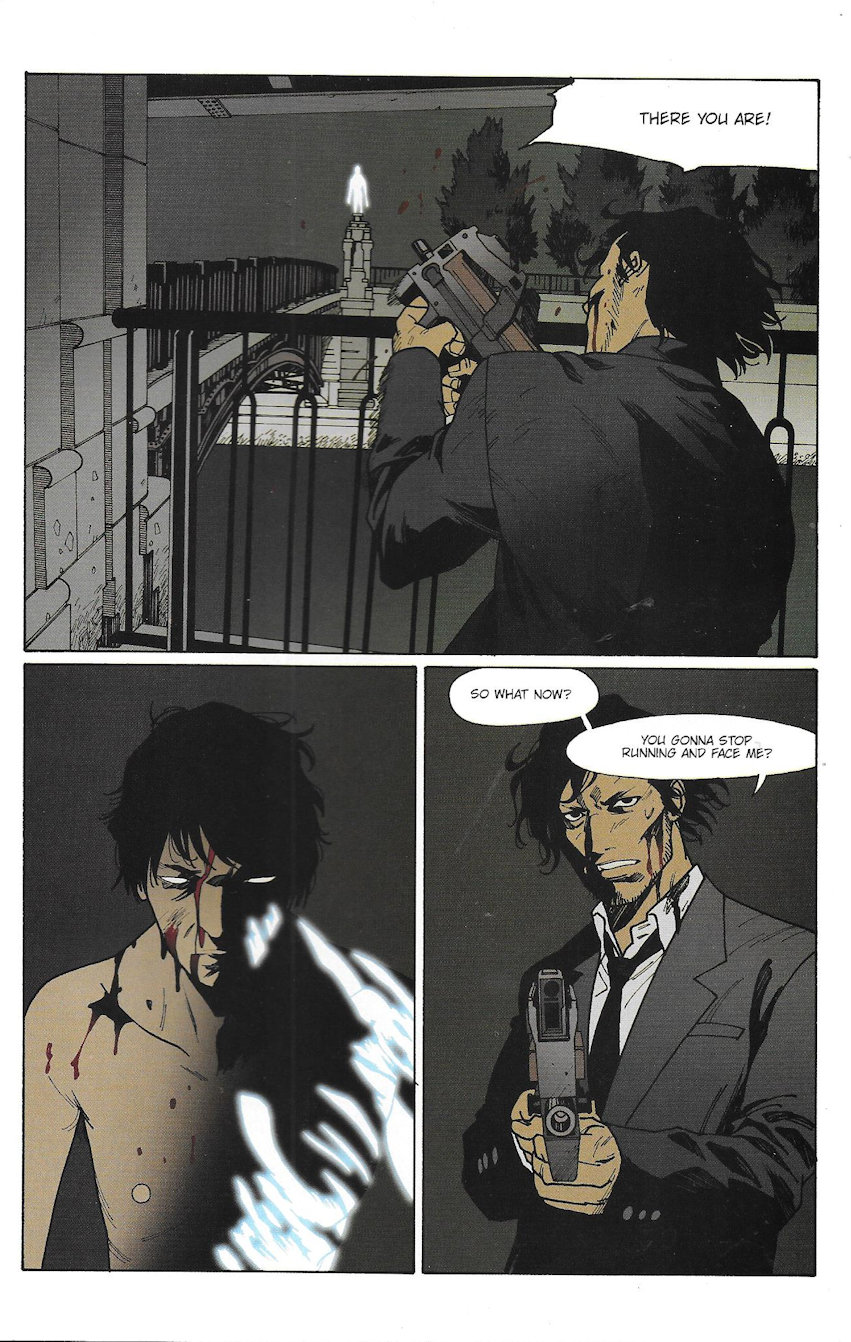 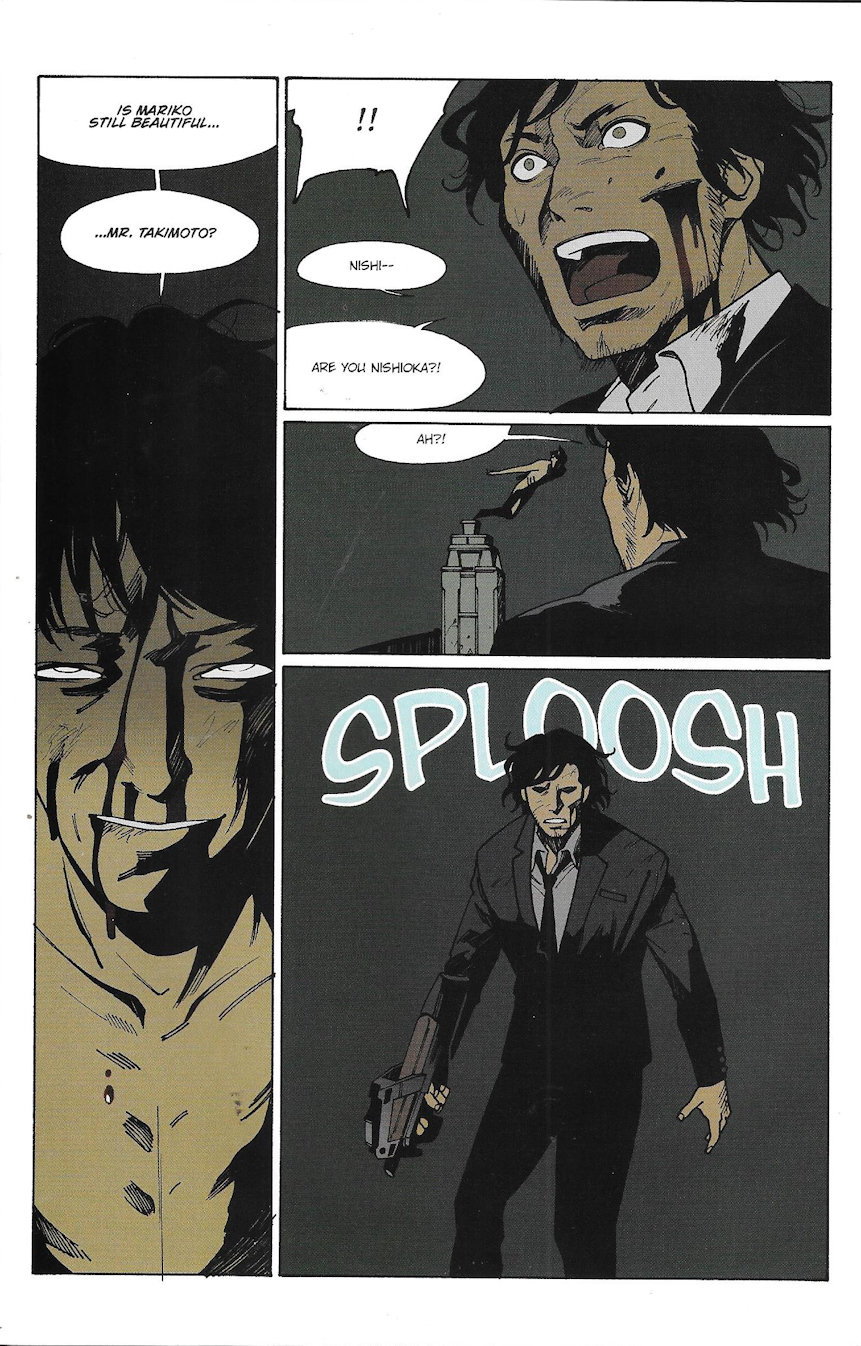 The one benefit to this is the laugh I got when detective Migiwa tries to help the girl and she goes all full-body “Scanners” on her. That pop and her reaction shot gave me a sick chuckle. 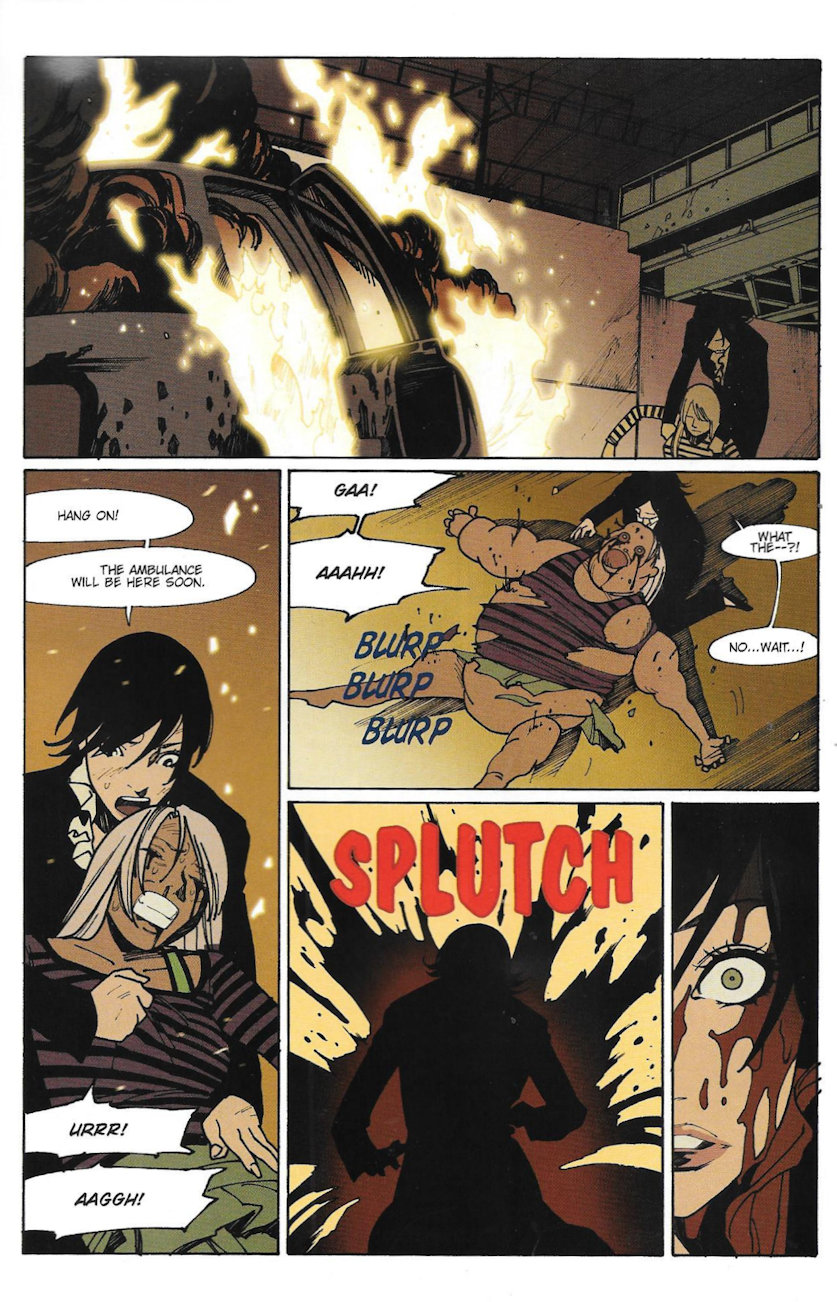 That and this weird exposition about the Devil wanting to impregnate the woman they found causing the “pop”. I mean here is Migiwa defending the rights of the Devil guy who just raped a person to death, basically, and I’m not saying she’s wrong, exactly….just that this defense is kind of unwarranted. The Devil-infected are a hazard to everyone around them and they clearly are lethal killers. Wise up, Migiwa. Before you get a dose of Explodey-semen sent your way. And of course we end with this tease showing Mariko, or someone who should be Mariko, in a shady government hospital lab. Yep, that hook isn’t getting me back. 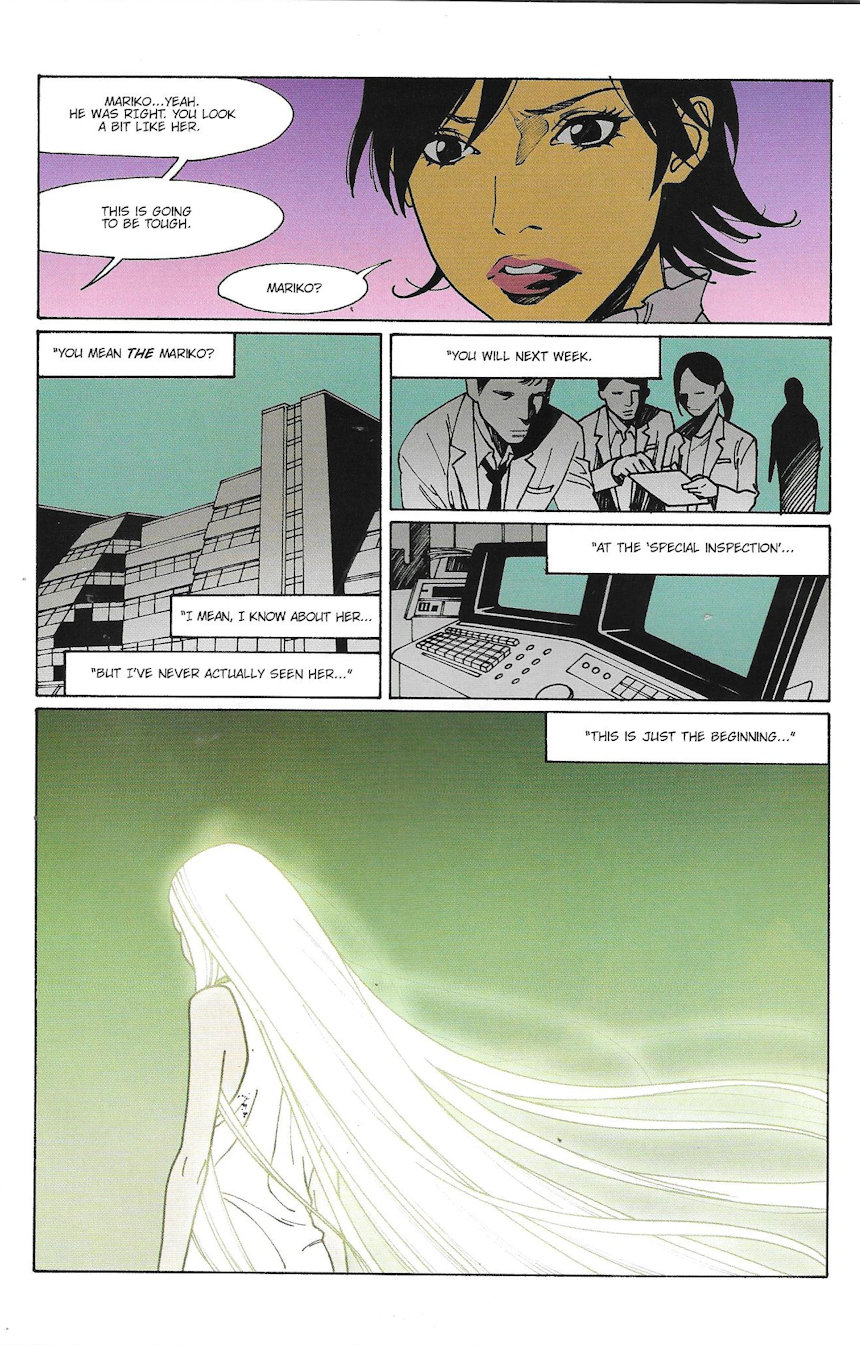 There were only four of these. In my mind that’s four too many.

Posted by SonOfCthulhu at 2:54 AM