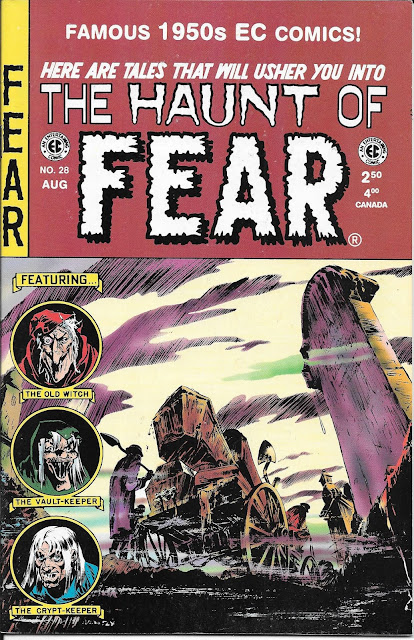 Final nail in the coffin

In 1954, with public sentiment turning against the horror and crime comic book genre and comic book publishers in general, William Gaines threw in the towel. His company, EC Comics, folded up shop. Gaines threw all of his efforts behind his new publication, a little title called MAD magazine, that dodged around the newly created comic book regulations by being a magazine, not a comic. And thus history was born.

This is where the bomb landed. This is THE final issue of one of the triumvirate of EC’s Horror line-up. Along with sister books Tales from the Crypt  and The Vault of Horror, the EC books were directly in the crosshairs of Congress’s Seante Subcommittee on Juvenile Delinquency. The harsh criticism that blasted the books as being the source of all the evils known afflicting youth of the 1950’s was as wrong-headed as it was pervasive. With the comic industry rolling over under the scrutiny and doing things like banning the words “horror” and “terror” in book titles while banning depictions of half the monster tropes from even appearing in books…Gaines had enough.

He moved on to other things.

But he didn’t go quietly. Here is his one page goodbye to the genre in this VERY special issue of THoF: 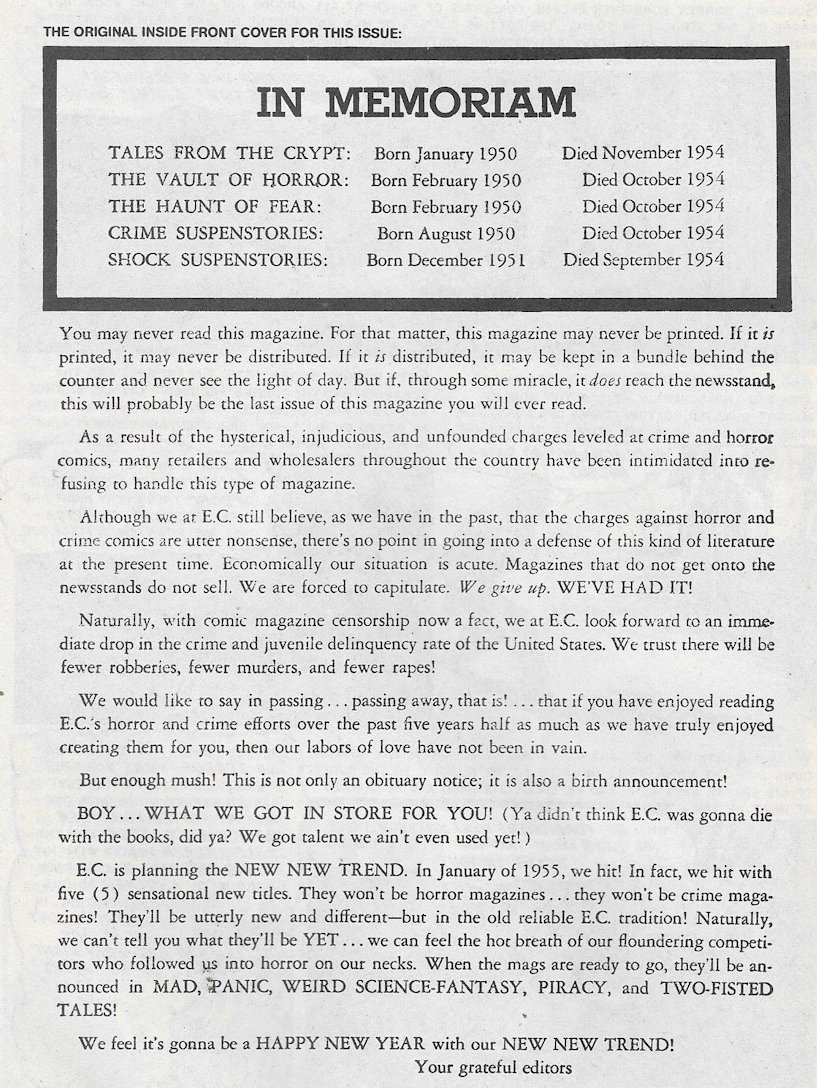 So savor this one while you can. It’s a shame that Gaines wasn’t allowed to continue, given how many things spun out of fond remembrances of his books. Things like the movie Creepshow and the TV series Tales from the Crypt being the most directly inspired. Lord only knows the things unattributed that owe their existence to him and his books.

However, he would find plenty to occupy himself with his MAD magazine creation, a sign that you can’t keep a talented man shackled no matter what.

As for the stories in this issue? Oh, they are so, so good. Buckle in kiddies, it’s going to be a thrill ride for certain…

If you thought the book was going to slide quietly into the grave, you are sadly mistaken. Nope! Not a chance. So first out of the gate is this tale of censorship and authoritarianism gone wrong. If Gaines was headed into the grave, he was going to claw and scratch all the way down and drag as many young minds over the line as he could. We should really thank him for that.

We begin with powerful citizen Warren Forbisher, the town prude, going all “super-Karen” on the town’s elected officials over a perceived break in the moral code. Forbisher is upset because he has caught two of the townsfolk kissing in public. Labeling it SIN, Forbisher uses his considerable influence in an attempt to get the city official to make the public display illegal. He even pulls out the “Either for me or you’re for SIN” and I am LOVING all the parallels this story must have held for those reading it at the time. 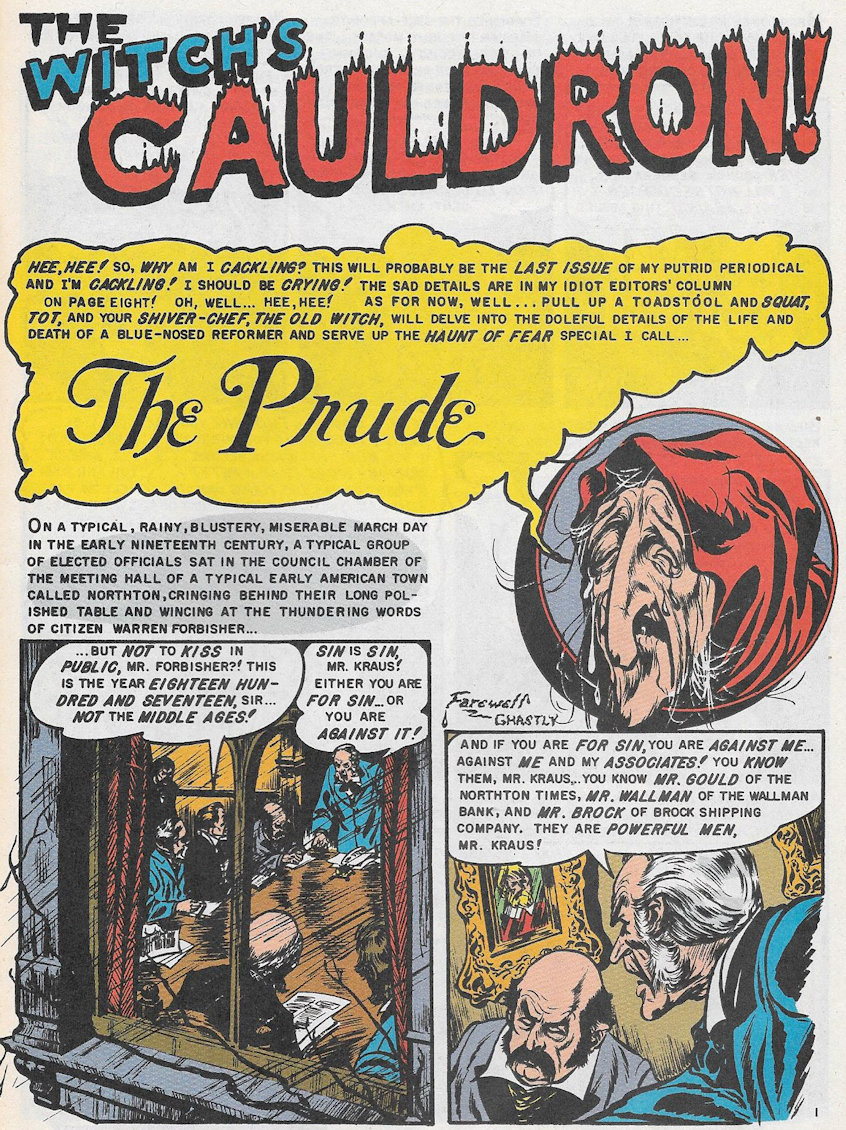 Wessler only deepens those links by having reasoned arguments for why there should be tolerance for those activities Forbisher finds so detestable. Forbisher takes his case to the press, where he’s gotten other measures passed that didn’t seem quite so outlandish, however this time it doesn’t cut much ice. Appears the editor sees Forbisher now for what he really is: a petty tyrant. Thus the prude is forced to appeal directly to the people. 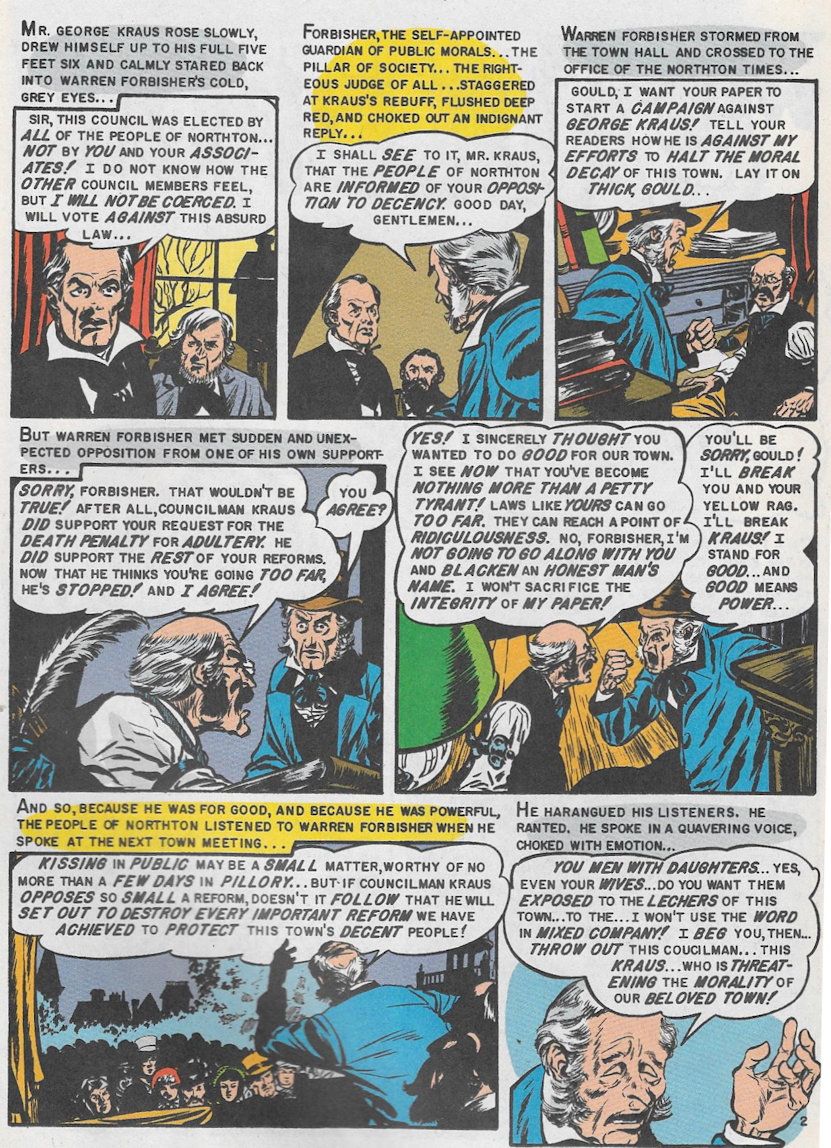 And you’d think they would be smart enough not to fall for it.

But you’d be wrong. Forbisher talks a good game and appeals to the “good” and “morally righteous” and gets the councilman tossed. 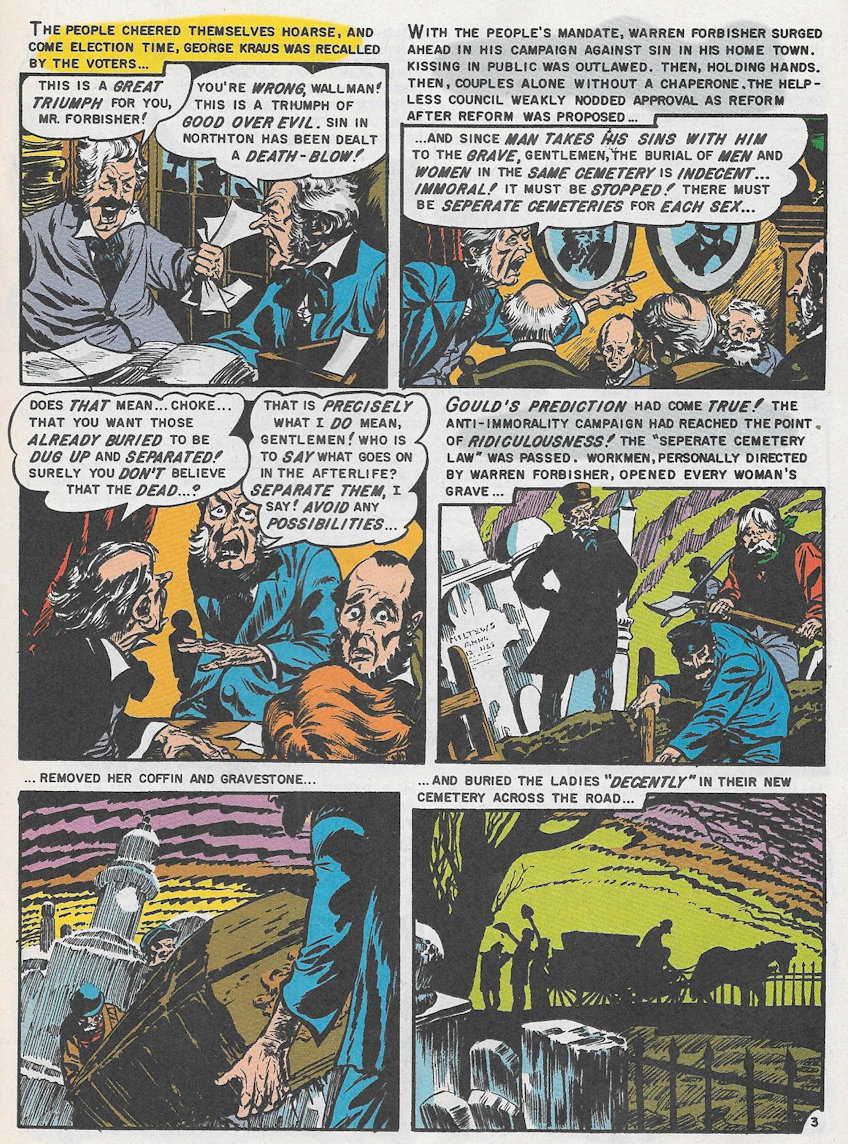 And he doesn’t stop there. Soon he has all manner of indiscretion vanquished to the point that men and women can no longer be buried together…EVEN couples already buried. And thus the town sets about erecting a new cemetery across the road and moving all the female bodies to it.

However, the grave digger tells Forbisher that there’s a dreadful problem. The women don’t like being separated…even in death. They dig themselves out of their graves and haul their headstones back beside their husband’s, and then bury themselves again. I love the “If the Dead can’t MOVE why’d we separate them in the first place?” question here. This is just a masterstroke. 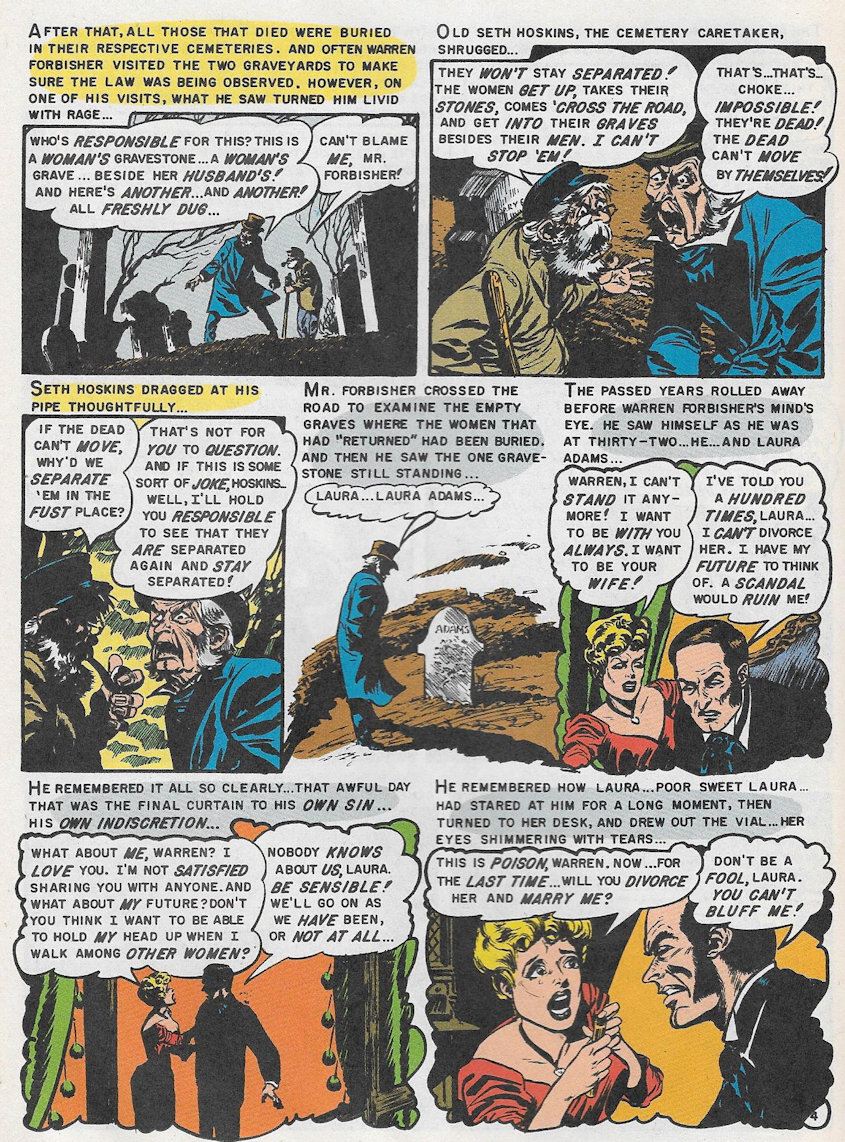 And of course Forbisher’s real issue with everything stems from the fact that he was unfaithful to his wife. His mistress gave him an ultimatum of divorce his wife or she’d down some poison. 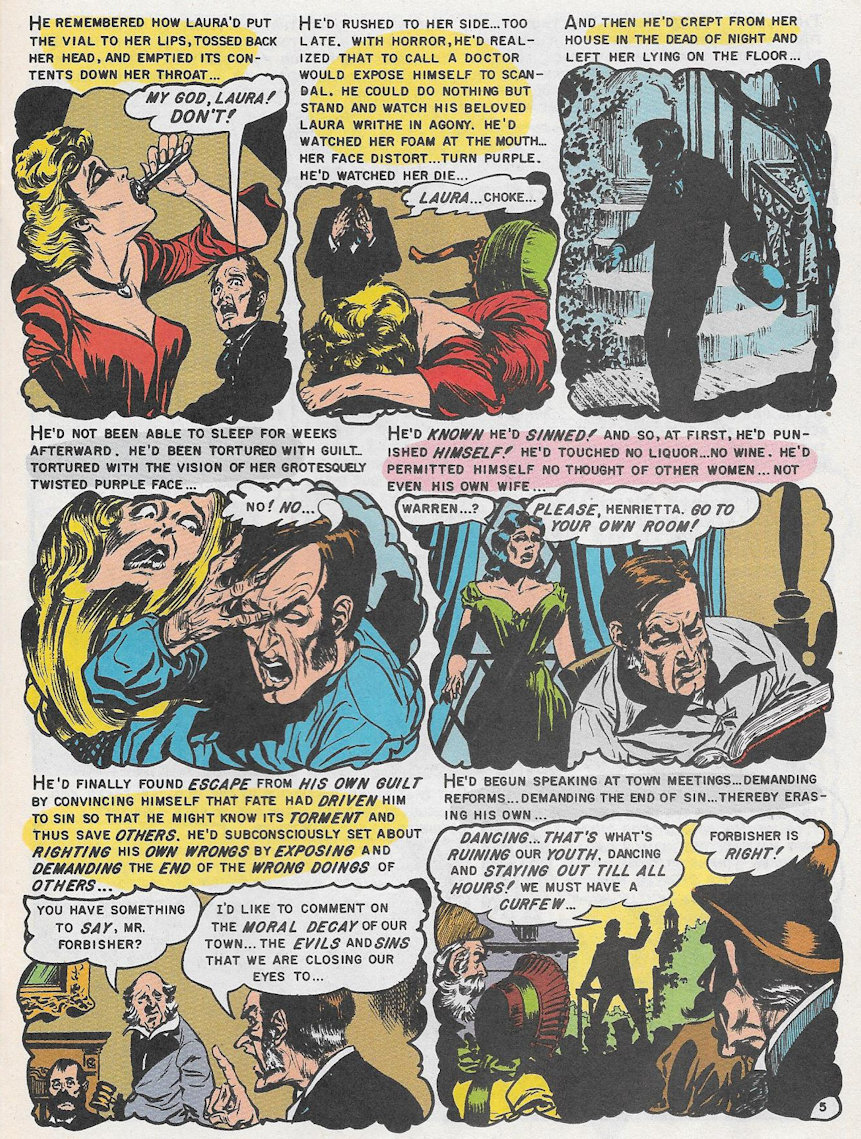 This is where the story gets so good because the metaphor is complete. The townsfolk who also had secret hidden guilts glommed on to the prude to hide their own feelings of inadequacy. Exactly like the Senate Subcommittee Members and the press and the populace at large. Gaines didn’t tell any story that hadn’t already been told time and time again. He just was singled out as a scapegoat to cover for the guilt everyone felt at not having a real clue how to reach out to the next generation.

Story wise we have to see Forbisher get his come-uppance and believe me, it is a doozey. First he keeps railing at the gravedigger because the bodies are together again. Finally he decides to spy on him and catch him in the act. 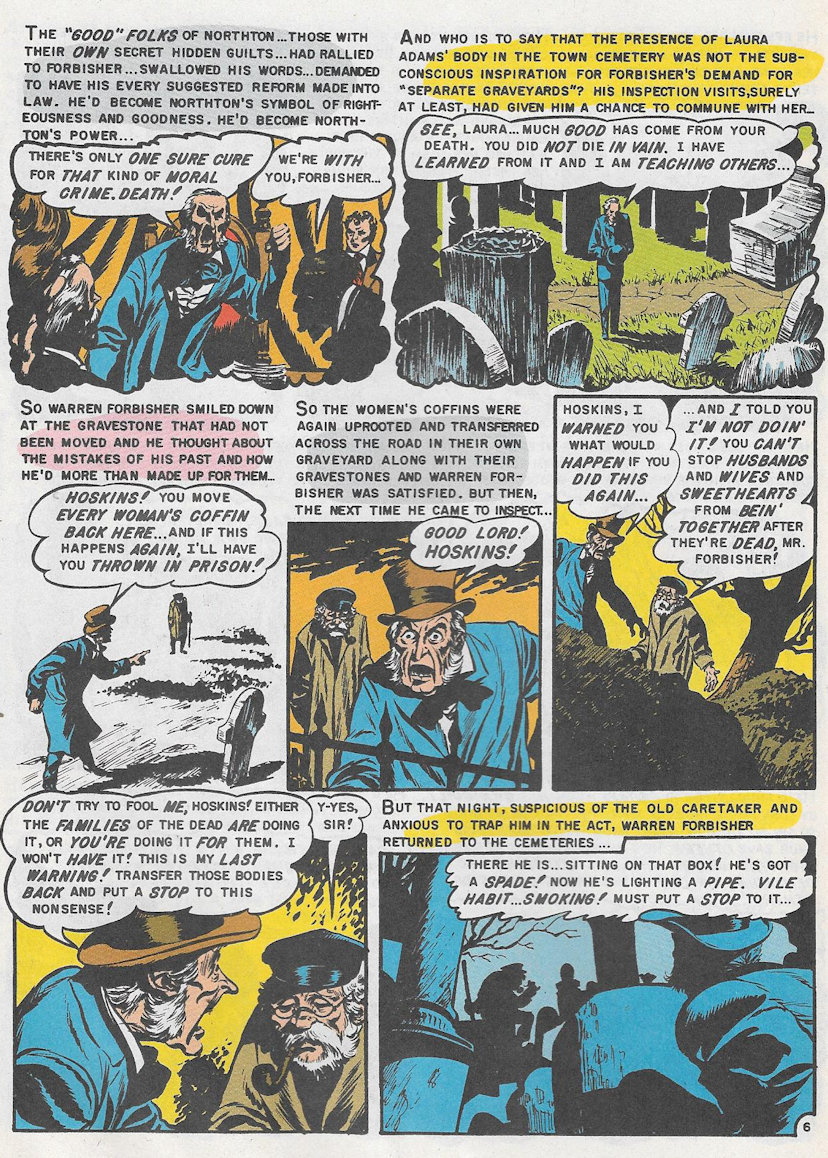 Unfortunately the gravedigger isn’t lying. The women do rise from the grave. Including Forbisher’s mistress Laura. And what she does to him isn’t discovered until the next morning… 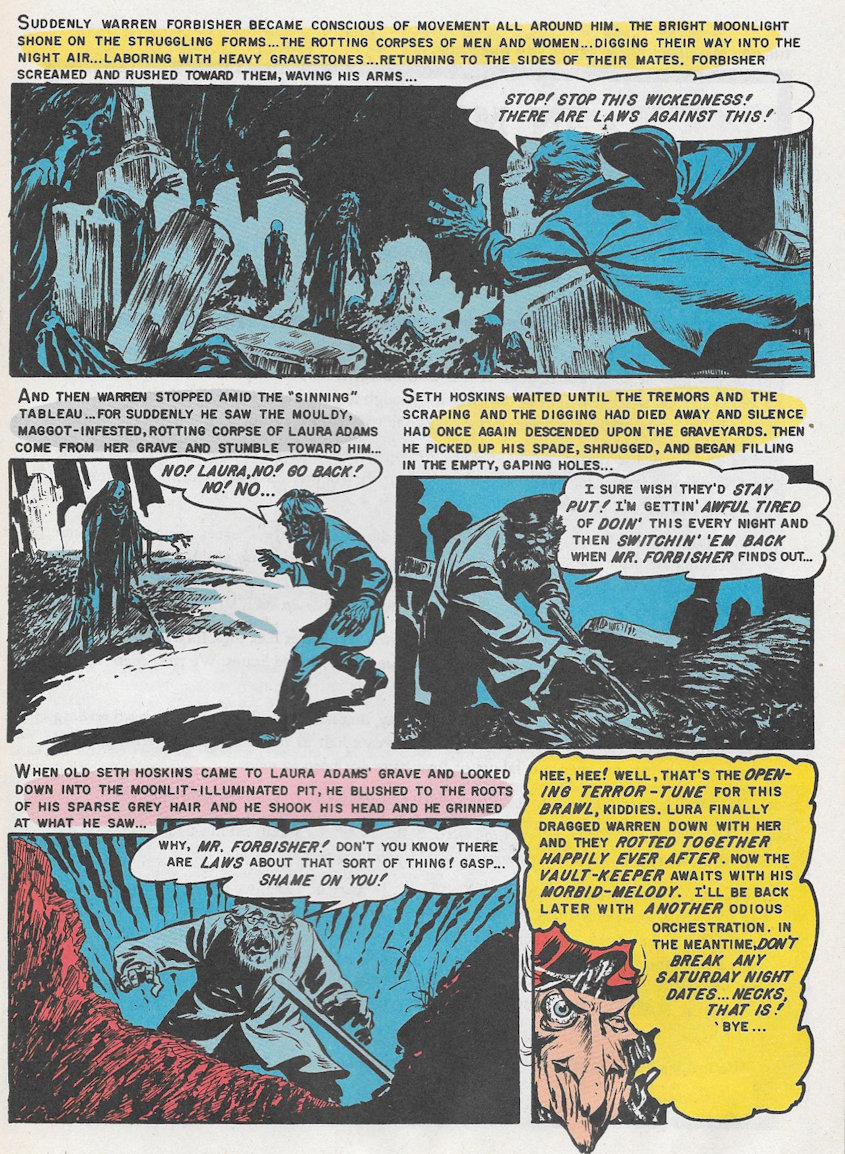 You have to love that last line from the gravedigger. Perfection achieved.

For all of you that loath big game hunters, this next one is right up your alley. The story follows John Carvel… 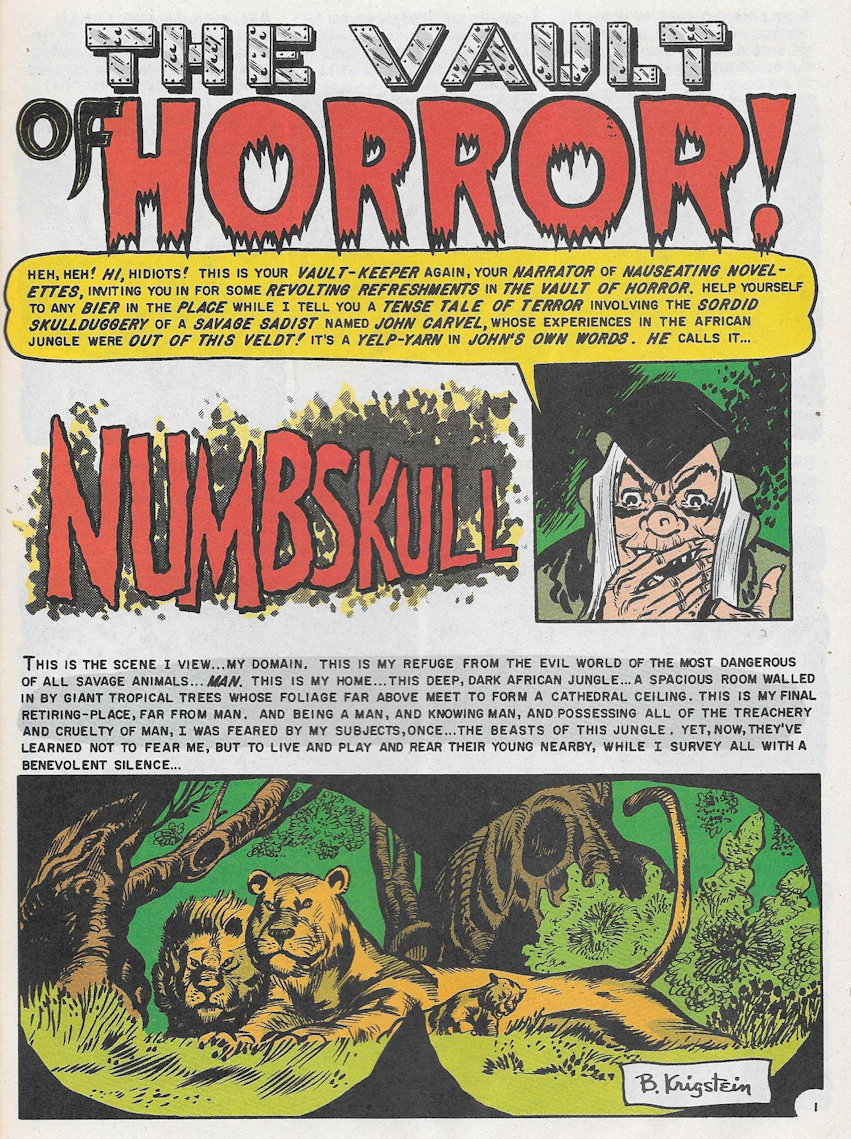 …a wild animal hunter with a difference. He prefers to trap his animals and then torture them to death with a variety of sadistic instruments. 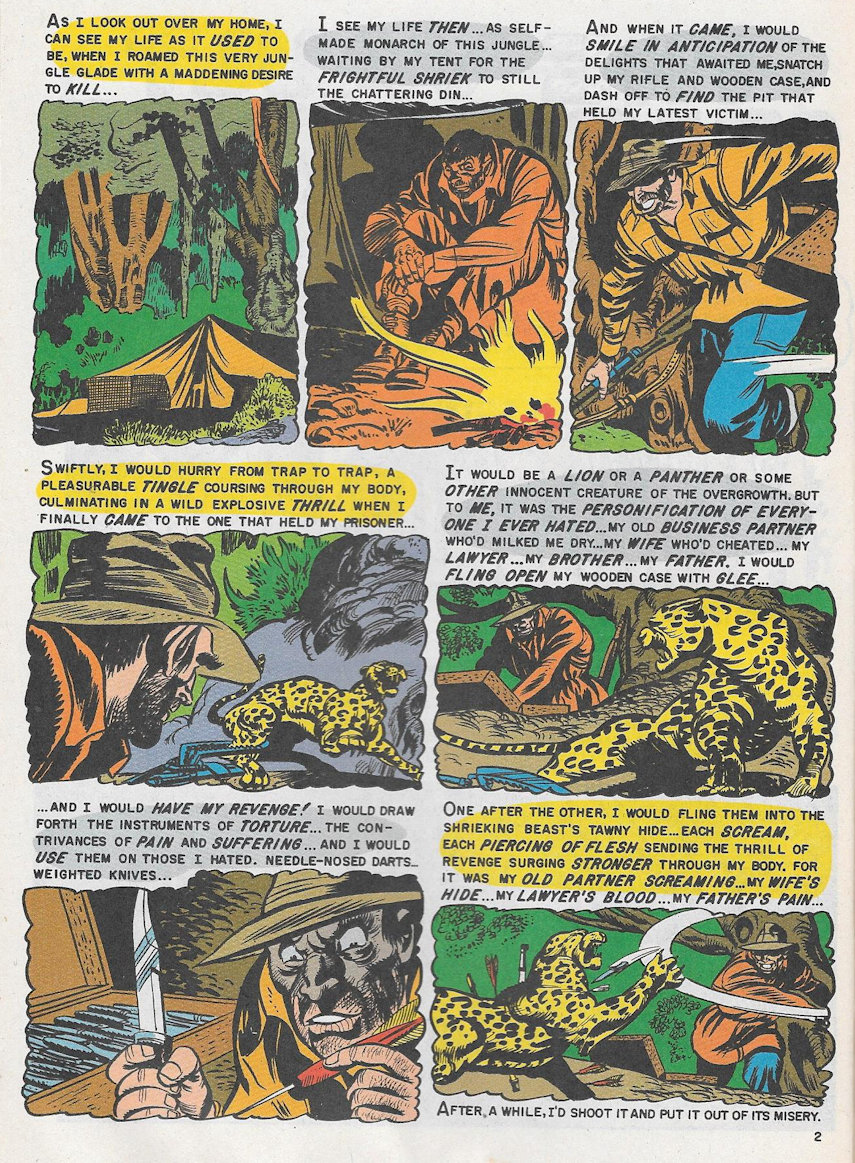 The sicko even goes so far as to light an African ant hive on fire. 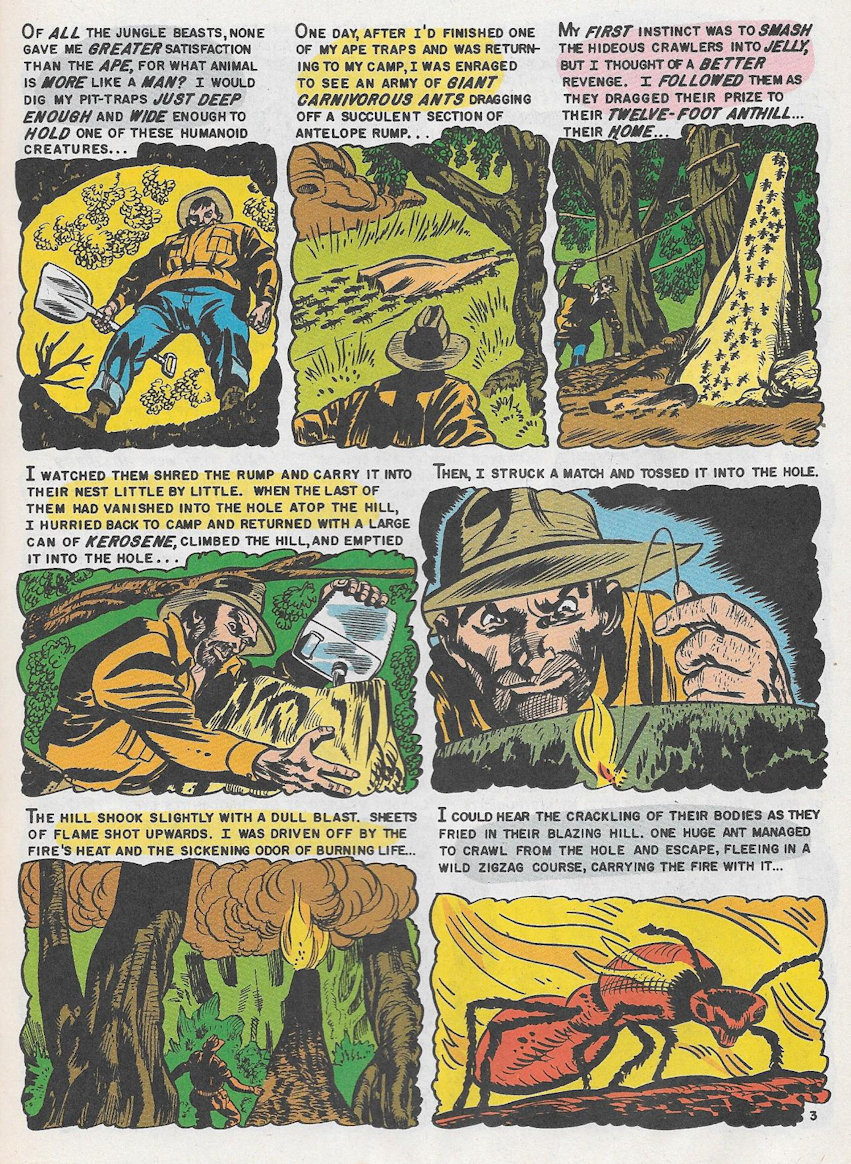 Before he can off an ant that emerges from the hive still on fire, he hears the cry of an ape in one of his hole traps. He does his worst to the poor trapped beast. 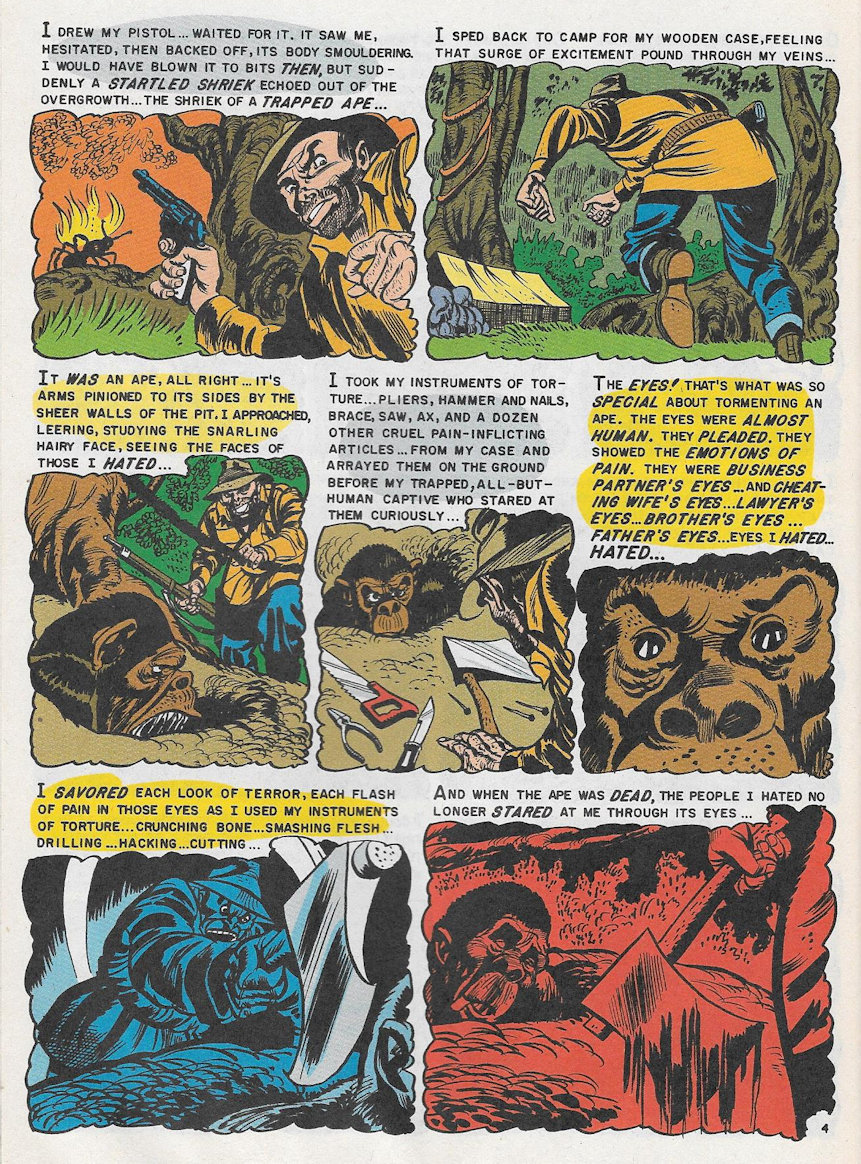 He does the same to a black panther…and is prepared to do more…when he suddenly falls victim to one of his own deathtraps. 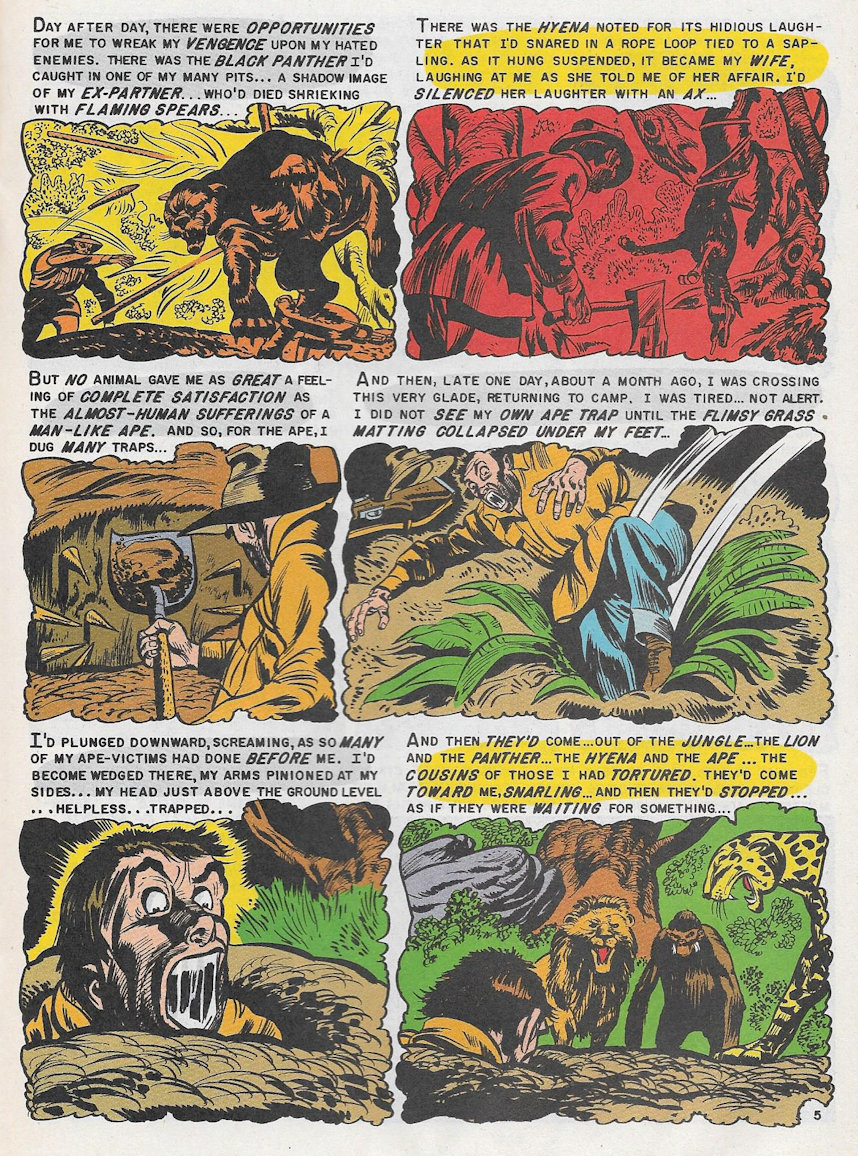 Caught, he can do little more than watch as animals gather of the type that he spent is life so cruelly slaying.

But they don’t do anything but watch. The spectator animals watch as the burned ant leads its legions of followers into the hole where they devour the man alive in what can only be called a fitting punishment. 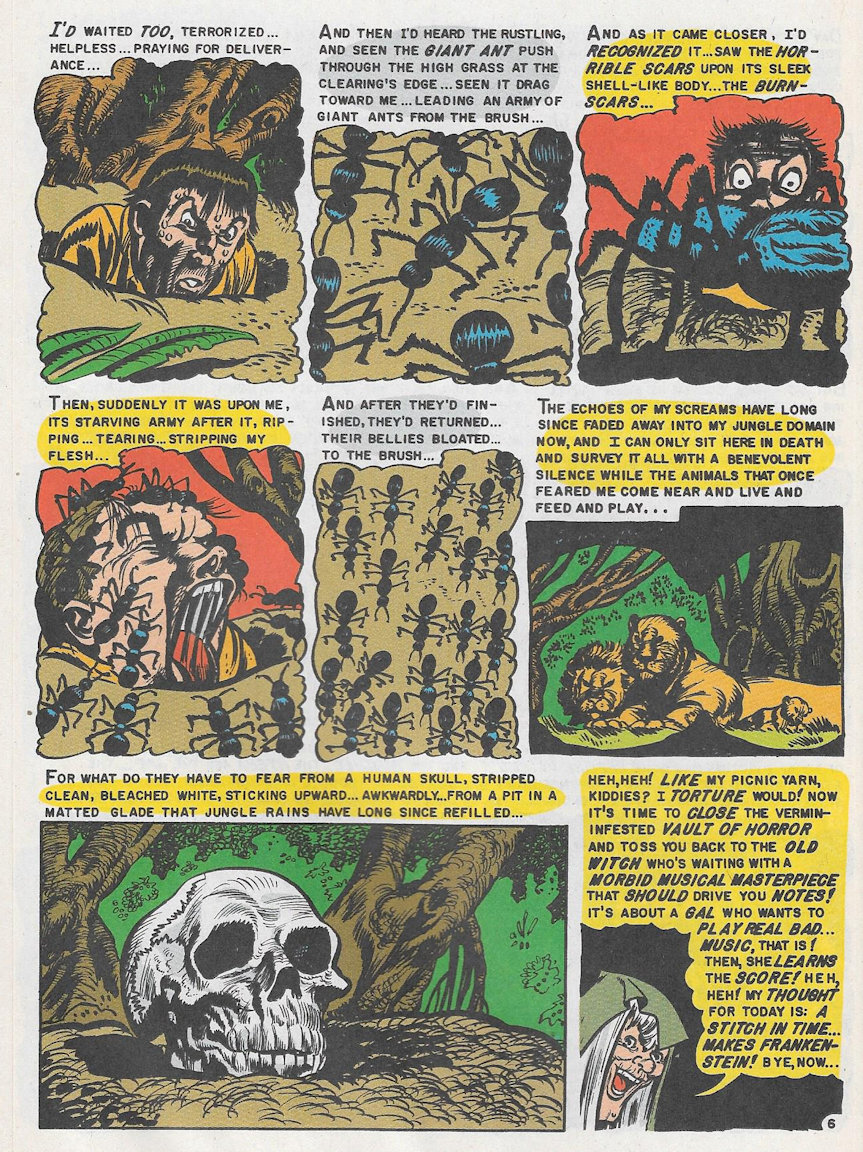 Next up is Audition. No, it’s not that gross-out Japanese film. Kiri-Kiri-Kiri to you, too.

Nope. It is about Mr. Vitale’s all girl orchestra. A gig that is definitely hard to get into. I’m just gonna let this one roll on. Be ready to give the performance of a lifetime…. 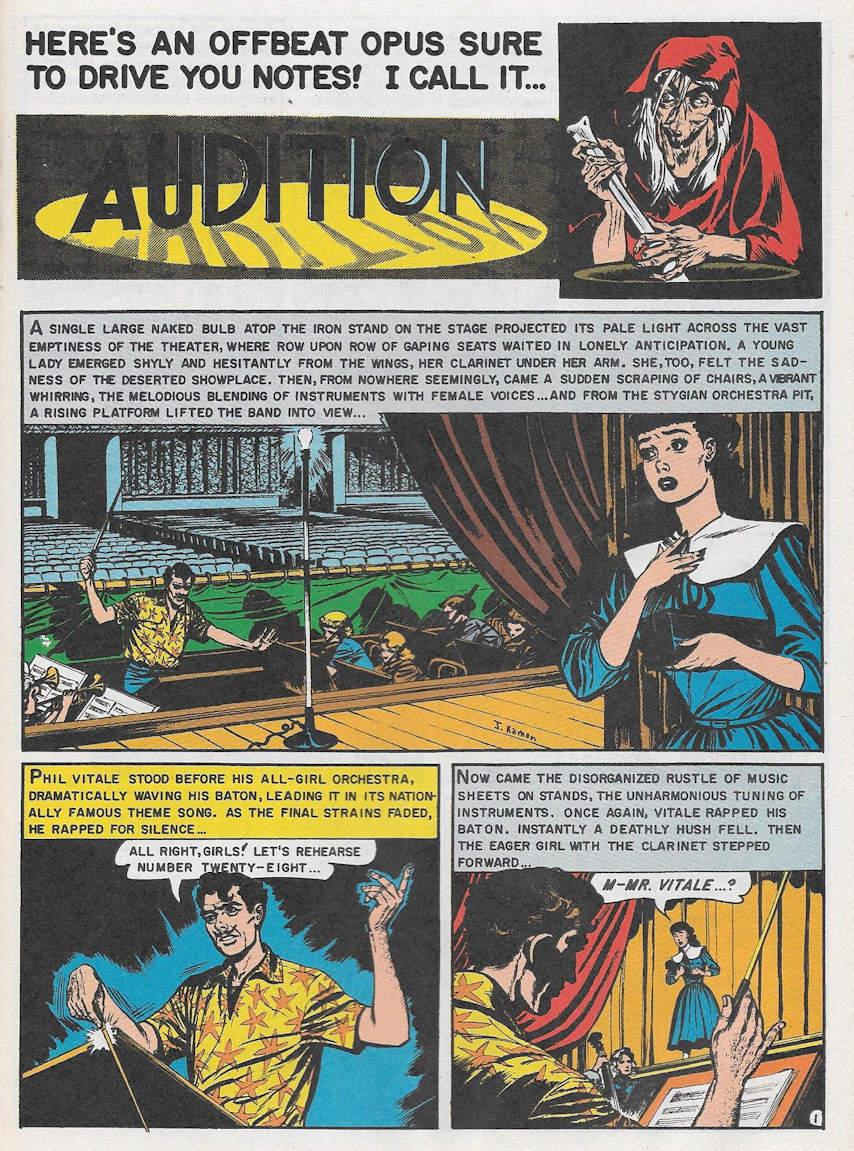 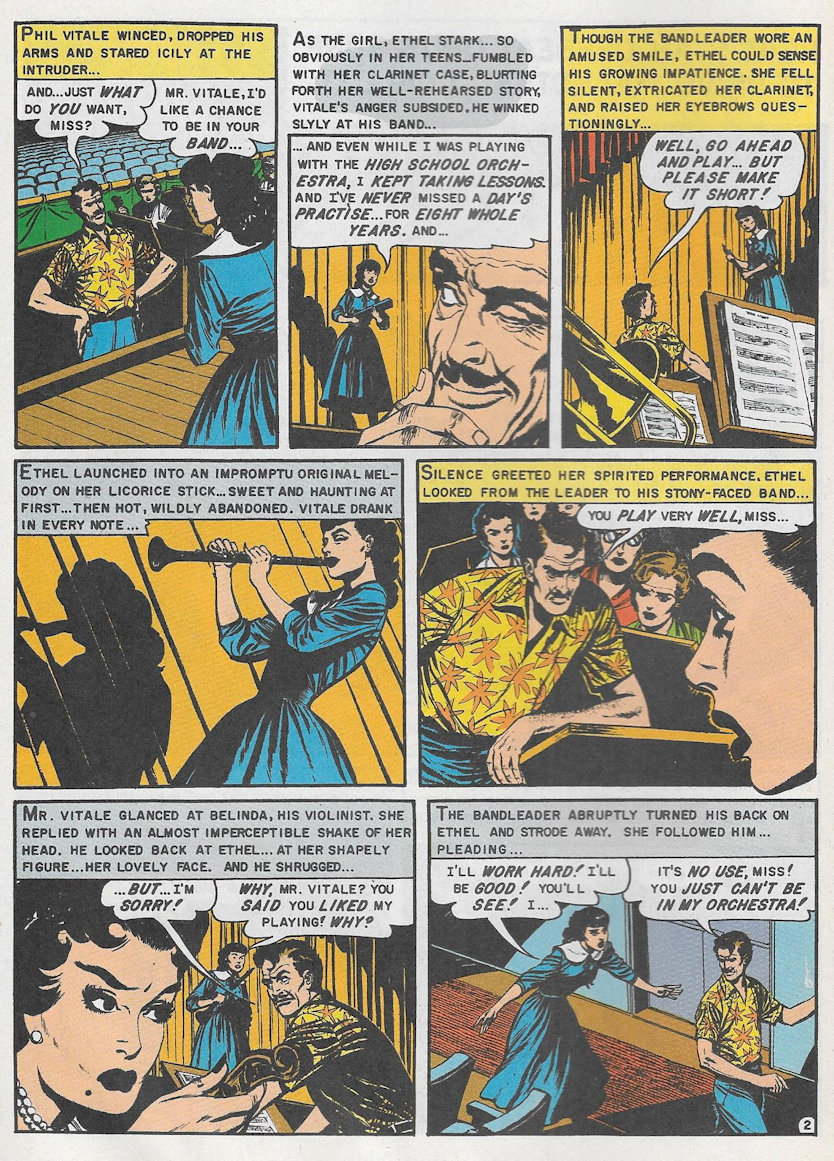 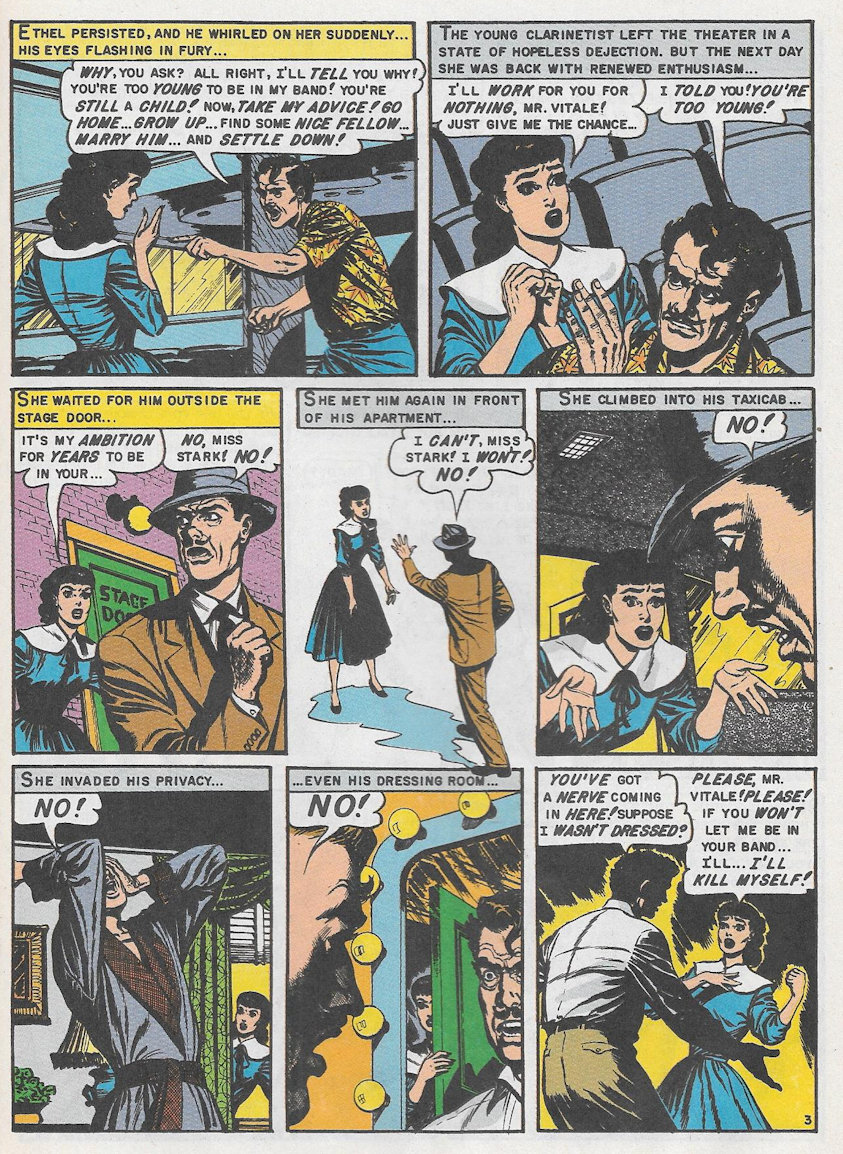 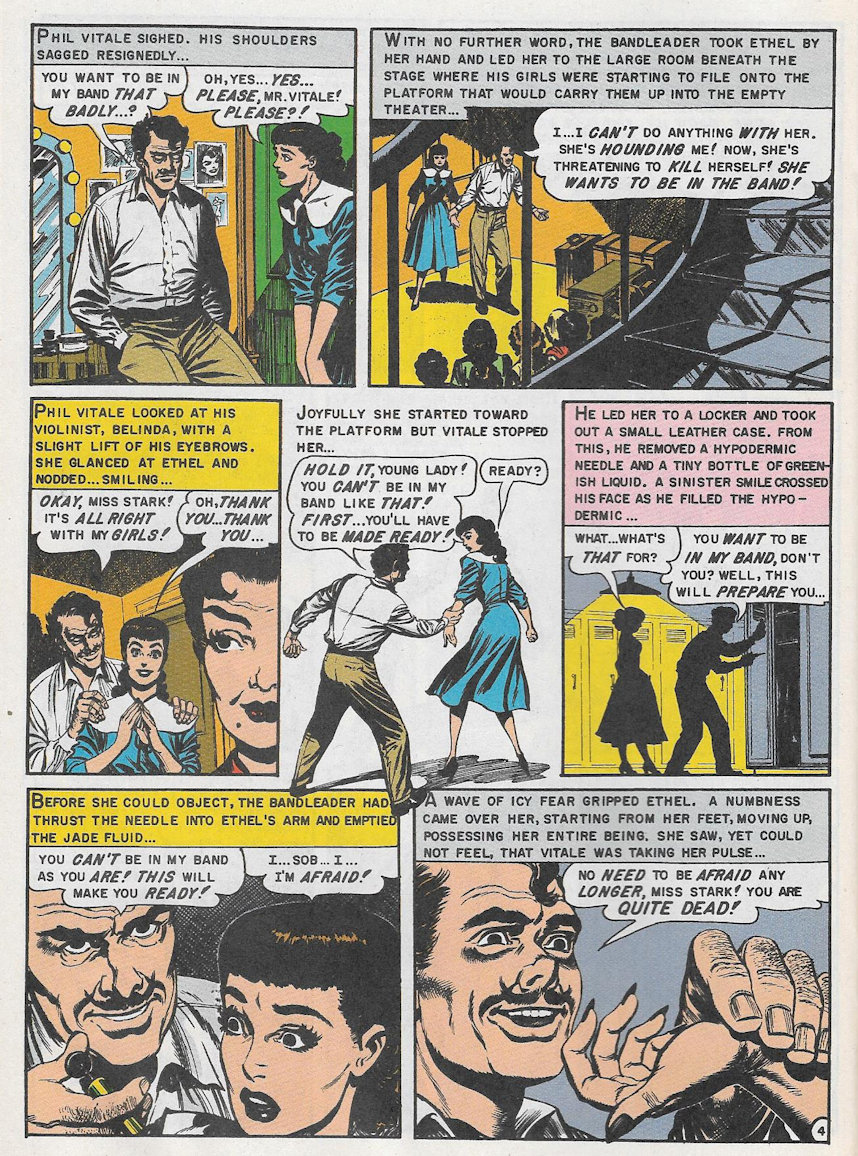 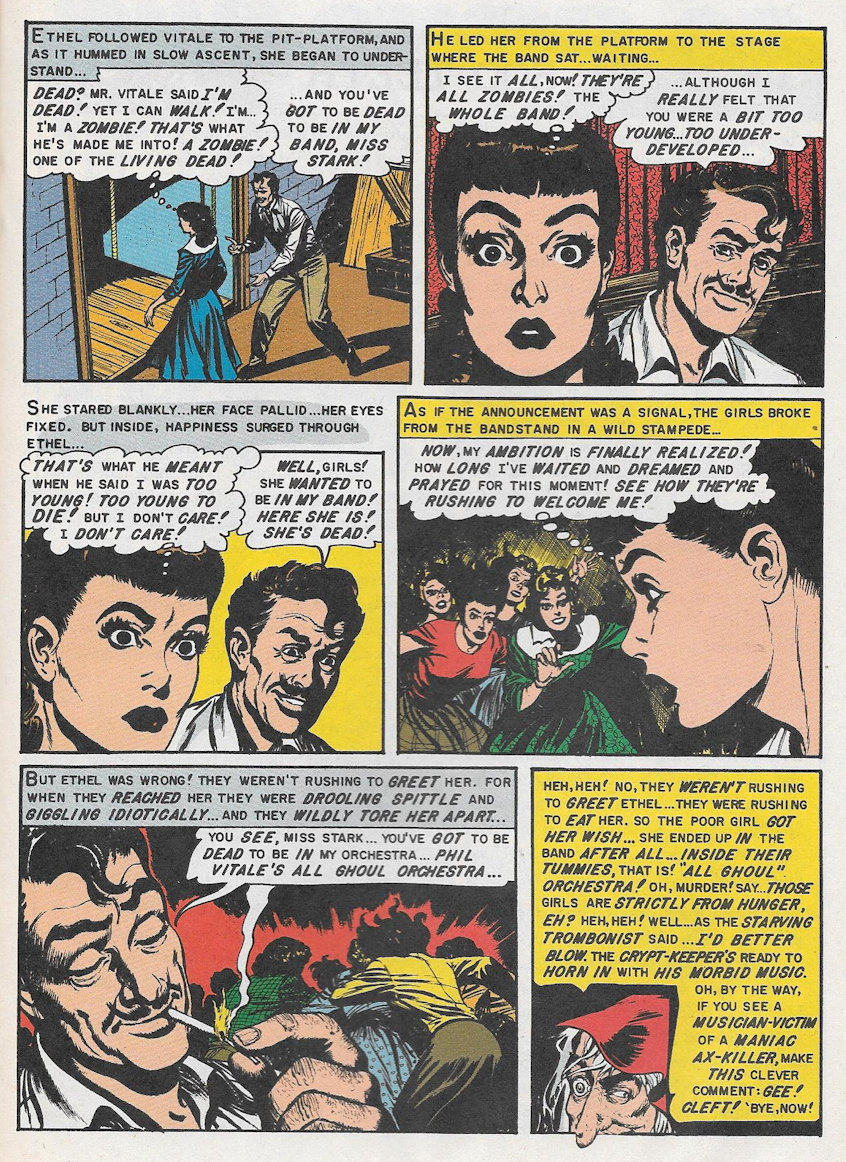 Well, she certainly was dying to get into that band. Love these weird inventive takes on story endings. They really are great.

And another case in point…this little ditty about some killer home protectors. 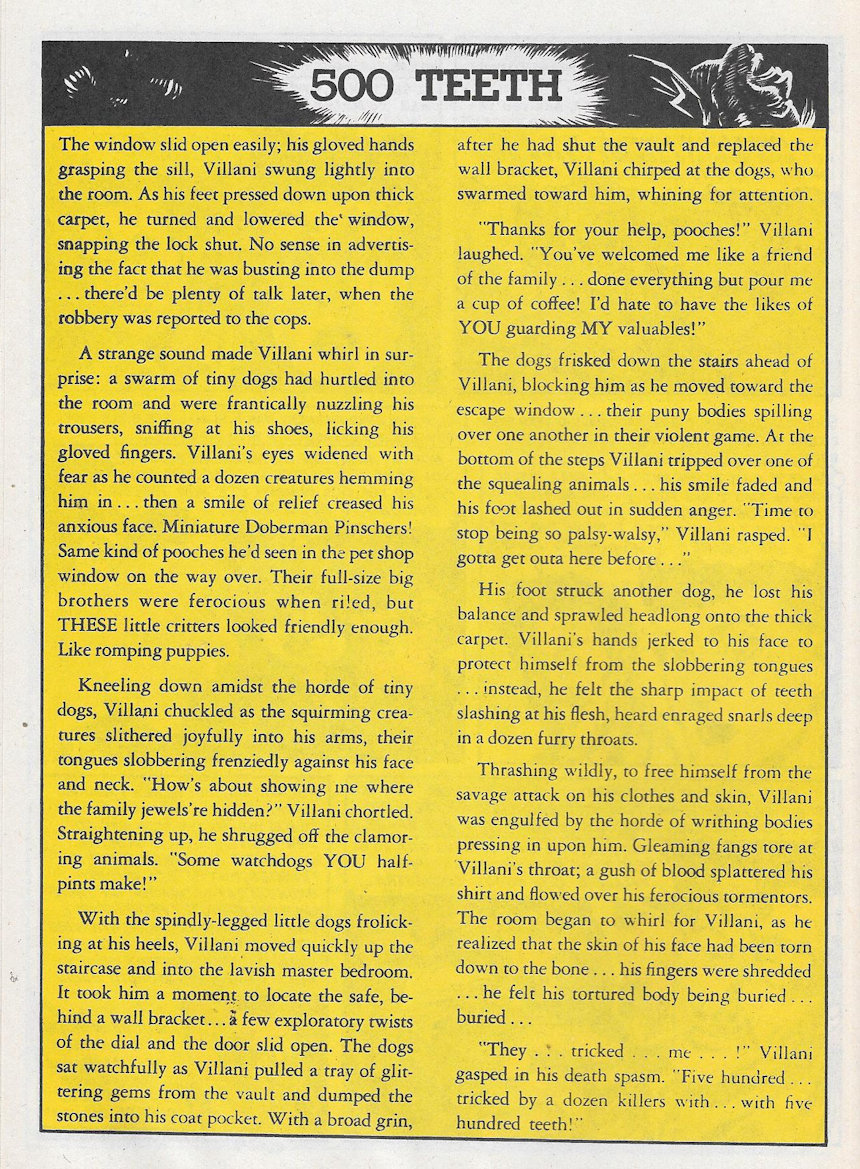 A Work of Art

And last up, the final story to cap off the EC comics universe…a tale of a man deciding who should prepare his body after death. And a tale of someone putting everything into their work, so much so that it is like a museum piece, even if others do not truly recognize its value. Much like Gaines contribution to the literary works we grew up with. He produced true Works of Art. And he went out on his own terms. Enjoy... 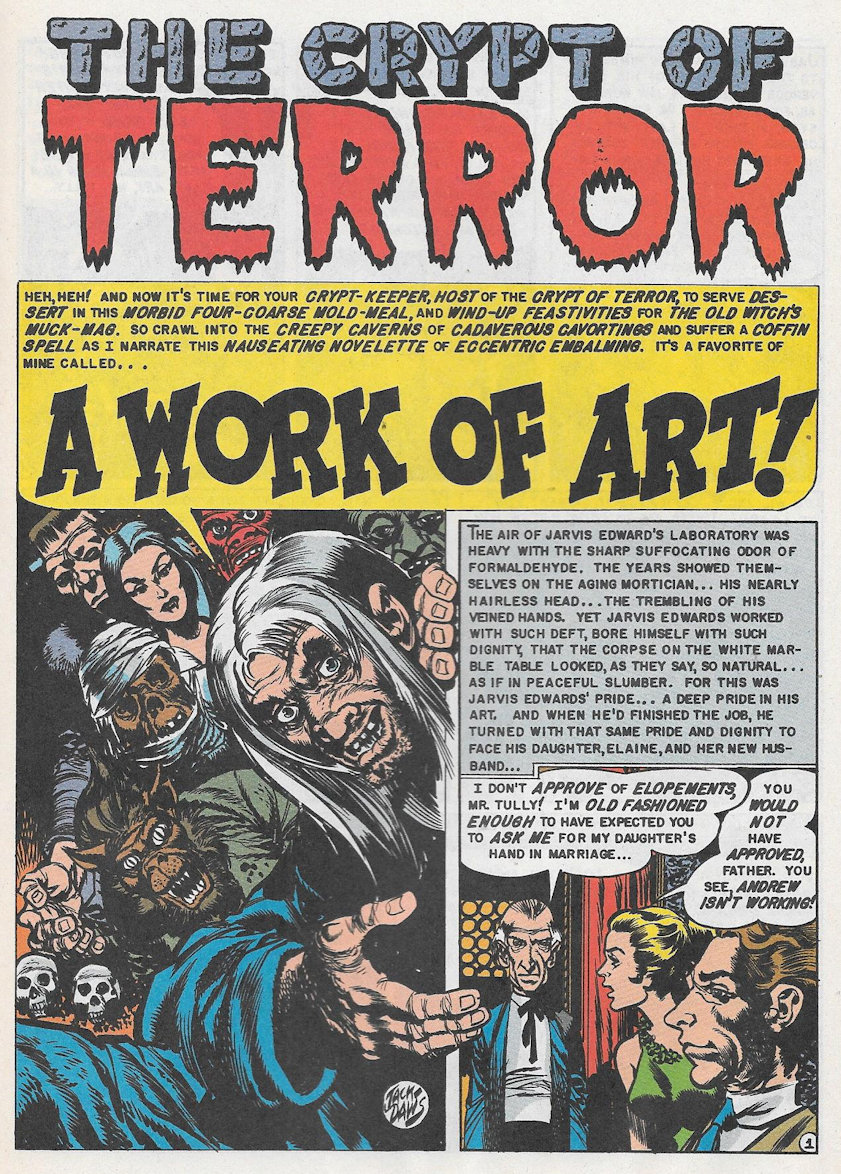 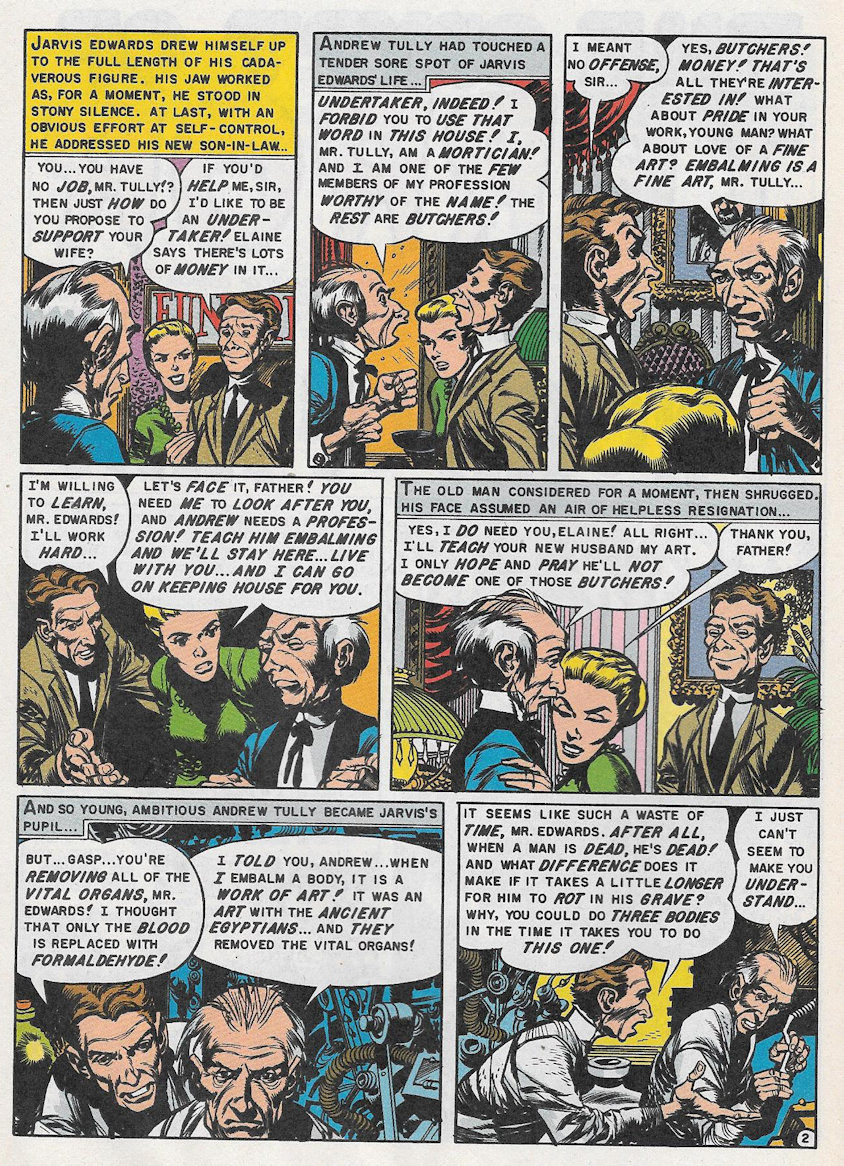 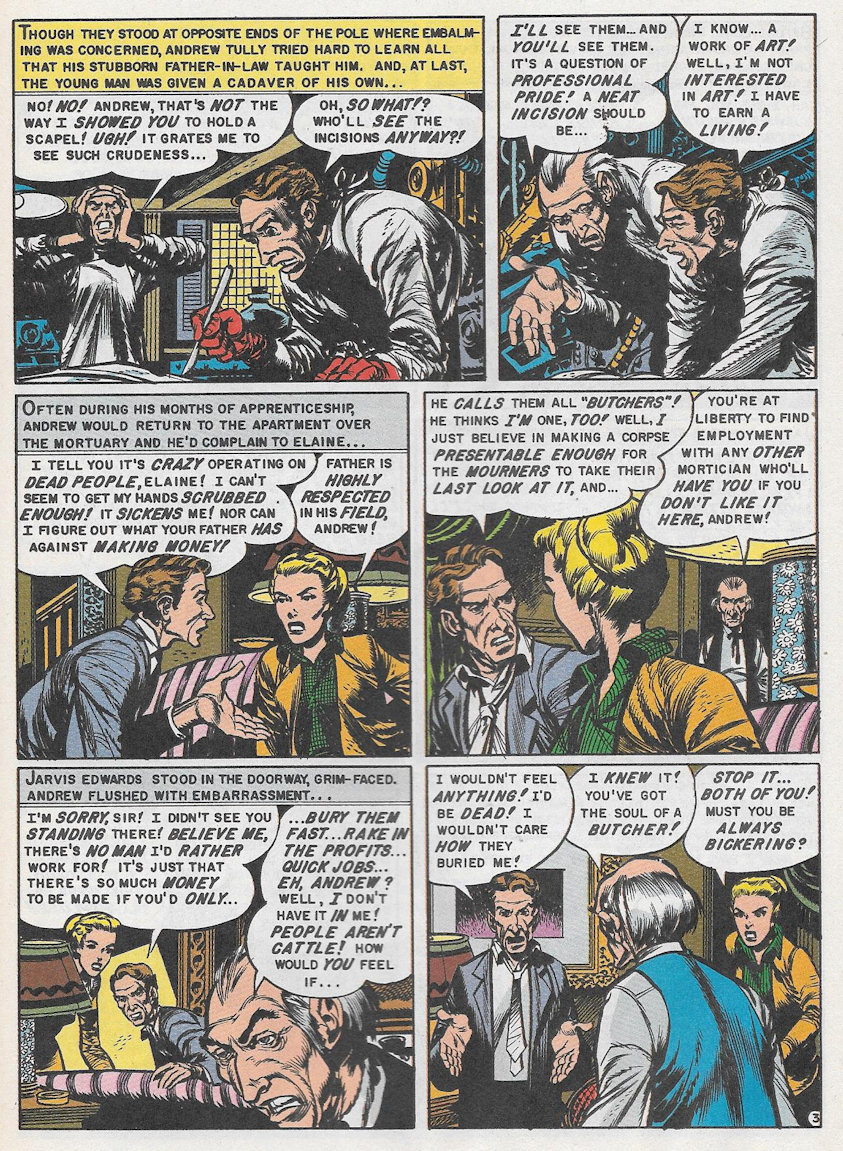 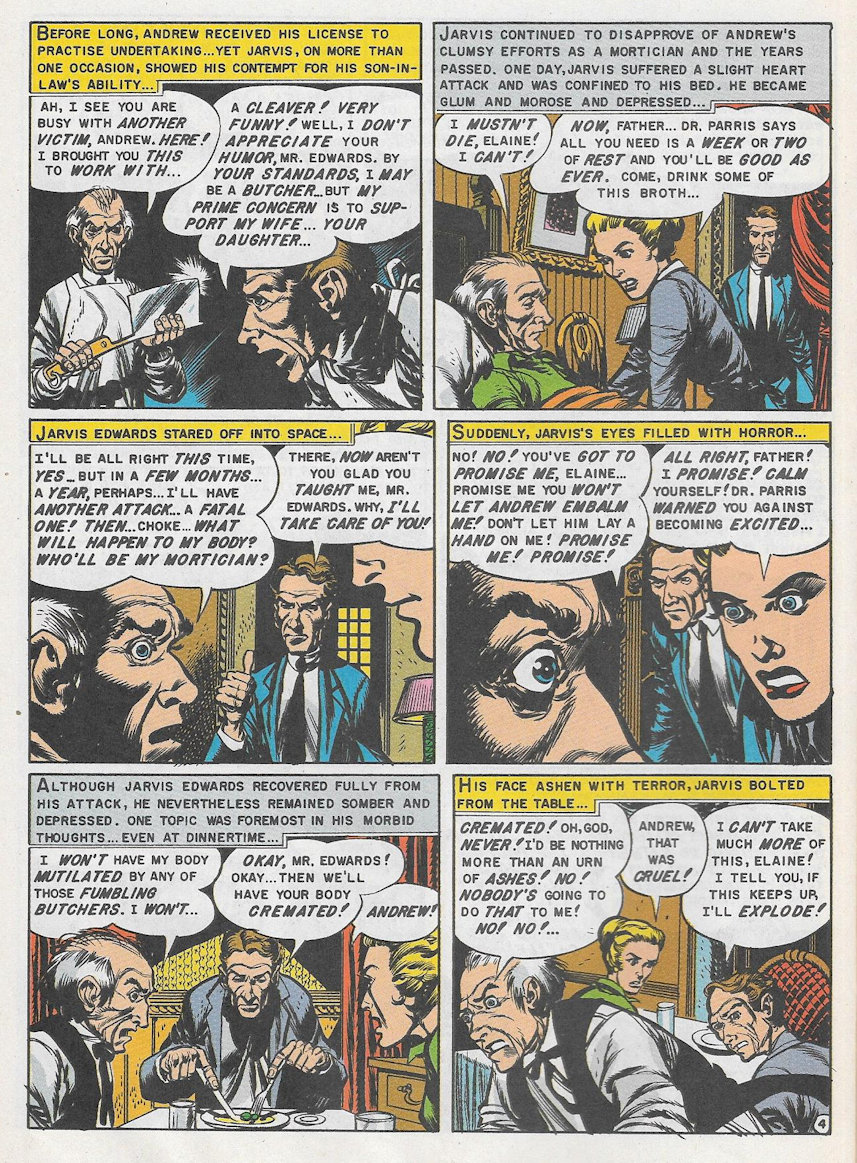 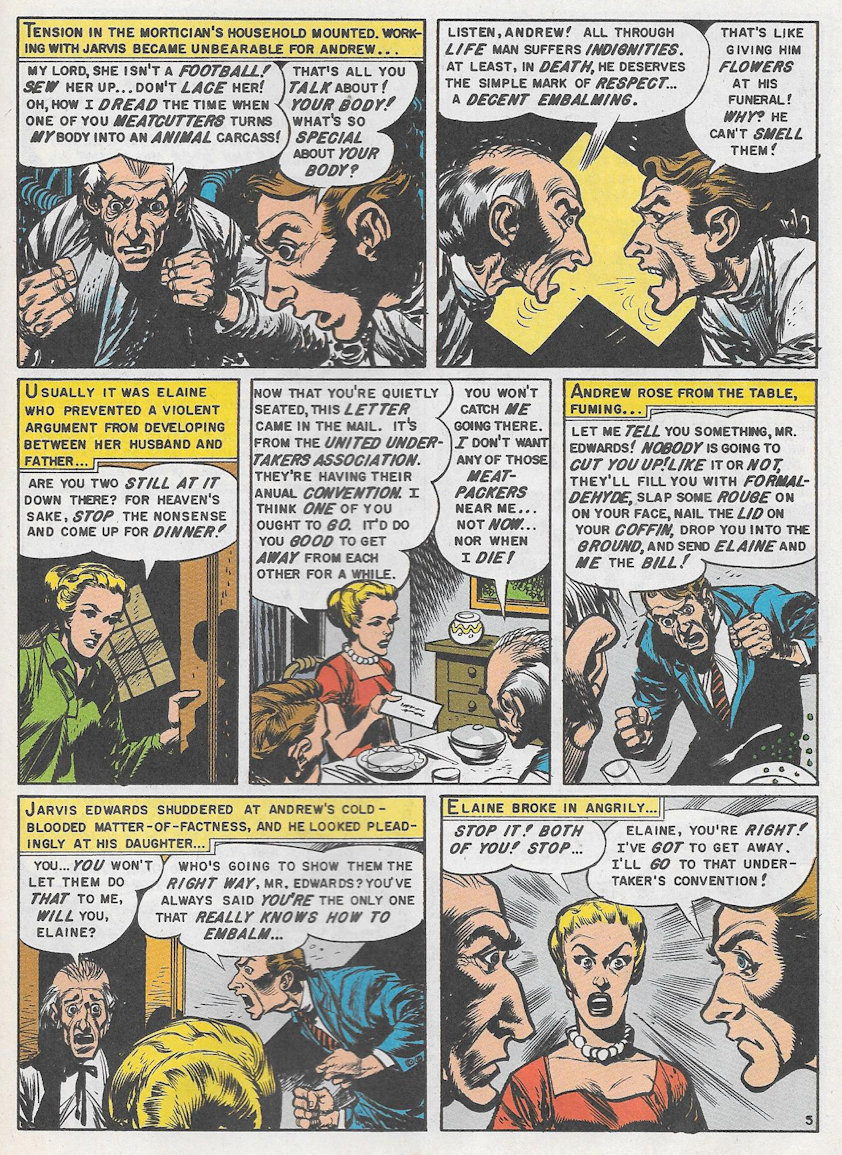 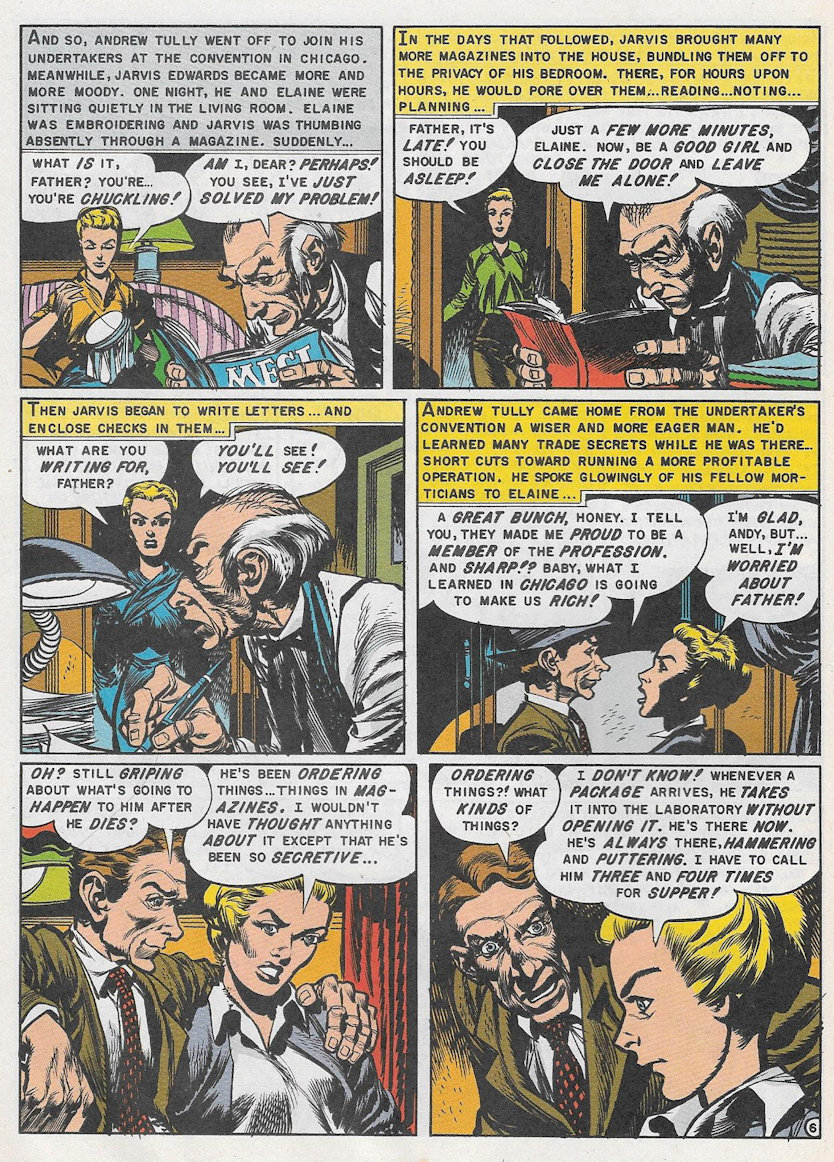 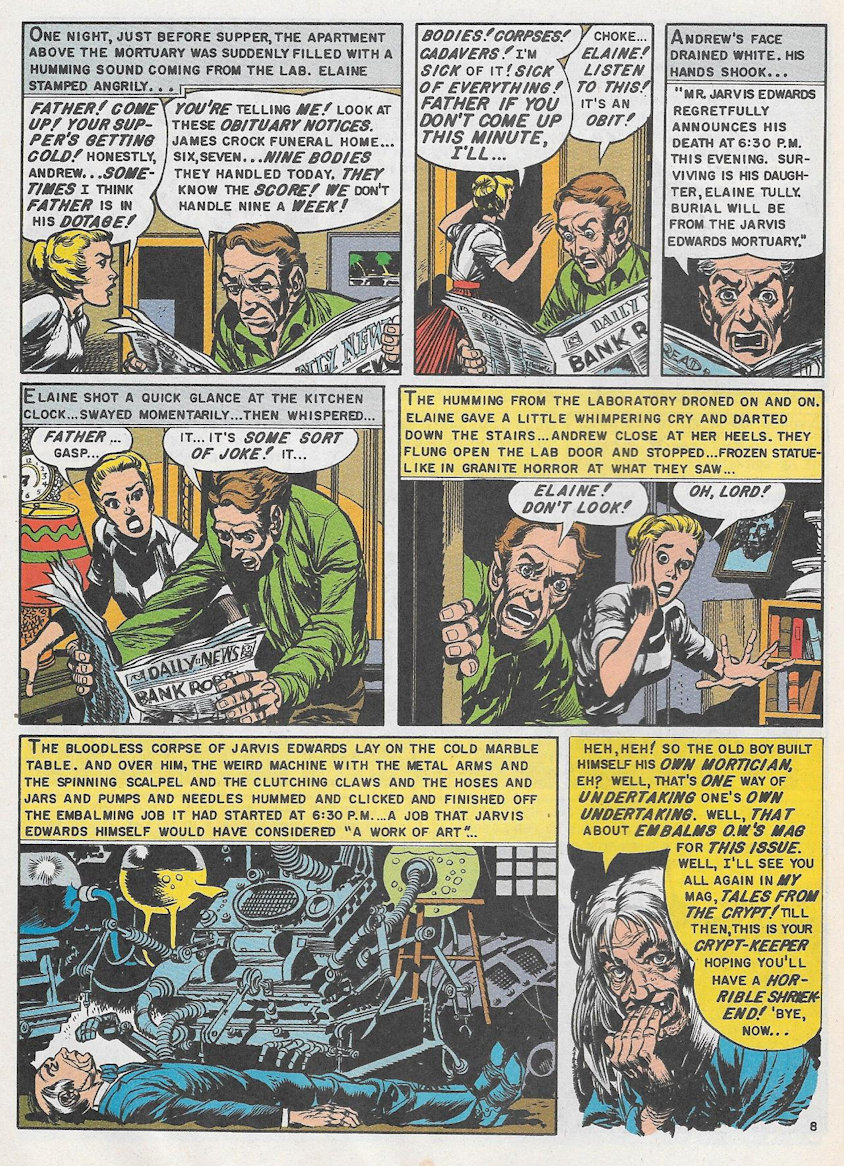 Posted by SonOfCthulhu at 3:04 AM