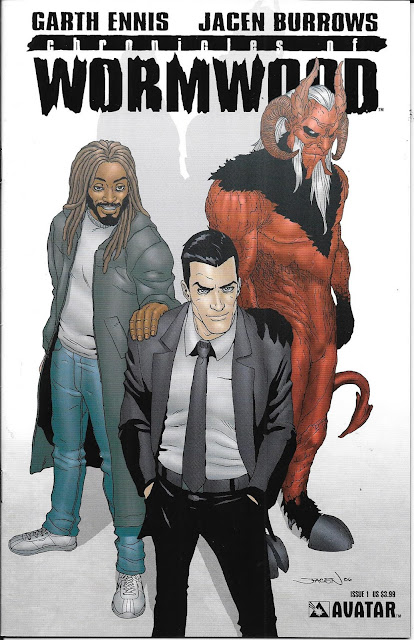 Son of a…well, you get the idea by now

With The Boys blowing up Amazon Prime, it’s time to chat about another amazing Ennis property: Chronicles of Wormwood. Like most of his adult properties, this book contains all but one of the hallmarks of Ennis’s writing: sex, humor, compelling characters, and intricate plotlines. The missing bit (at least in this issue, I can’t yet speak for the other five) is the violence.

But even missing that bit doesn’t bother me, because the book is vintage Ennis, a writer who is engaging and readable, whose stories pull you in with well thought-out characters and imaginative stories. I genuinely love Ennis’ works and it’s nice to find something great to review in the pile of Halloween books.

Let’s jump to it, as I’m sure you’ll all be interested in what Chronicles has in store for us… 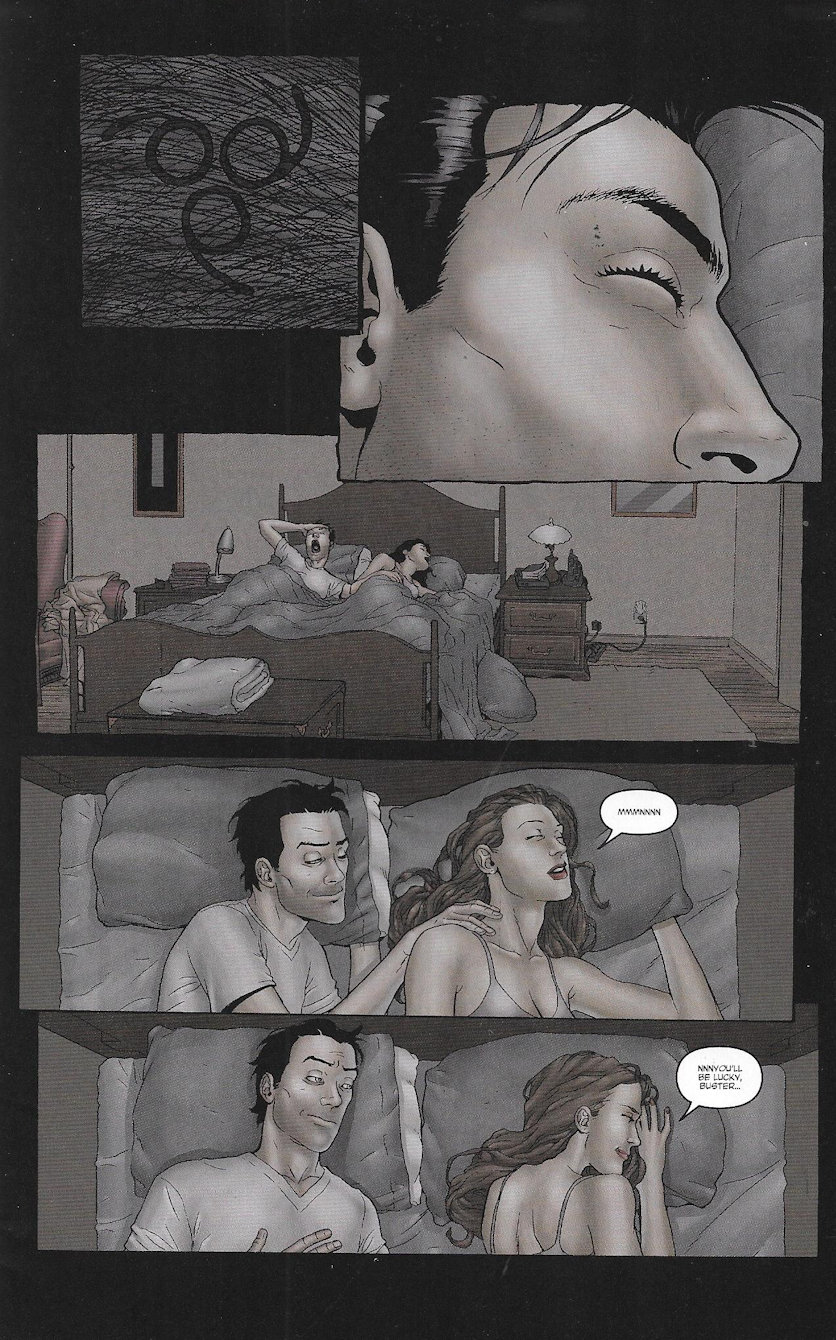 We begin with a couple in bed together first thing in the morning, but the interesting thing about this is the pull out from panel one of an odd “666” tattooed somewhere under the guy’s hair. That mean’s he’s got the mark of the beast making him the antichrist. Okay. Decent way to peak my interest…let’s see where Ennis takes this… 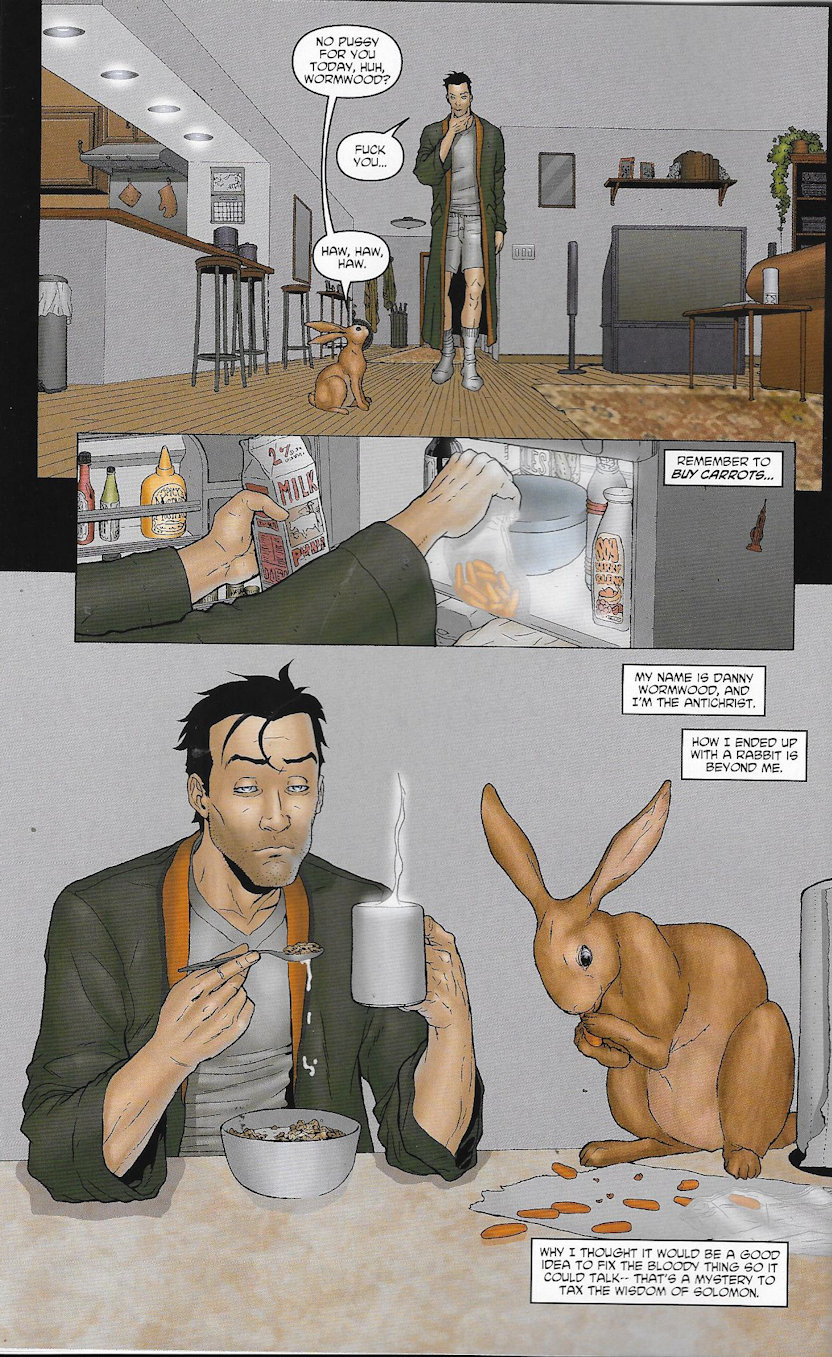 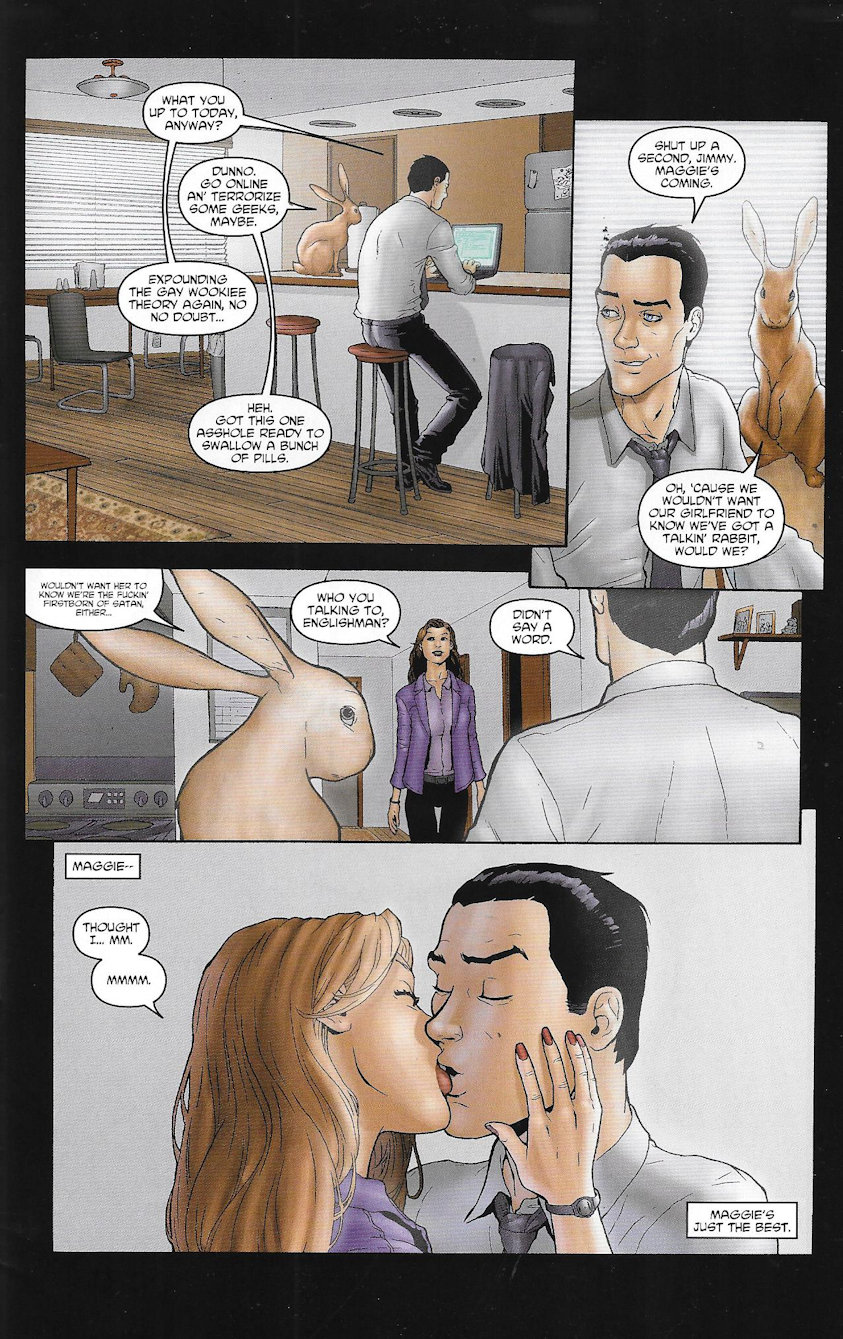 Our next two pages has Wormwood chatting it up with his talking pet rabbit and narrating that he’s the antichrist…and we get the idea that he might not be a bad fella, hard as that is to believe. 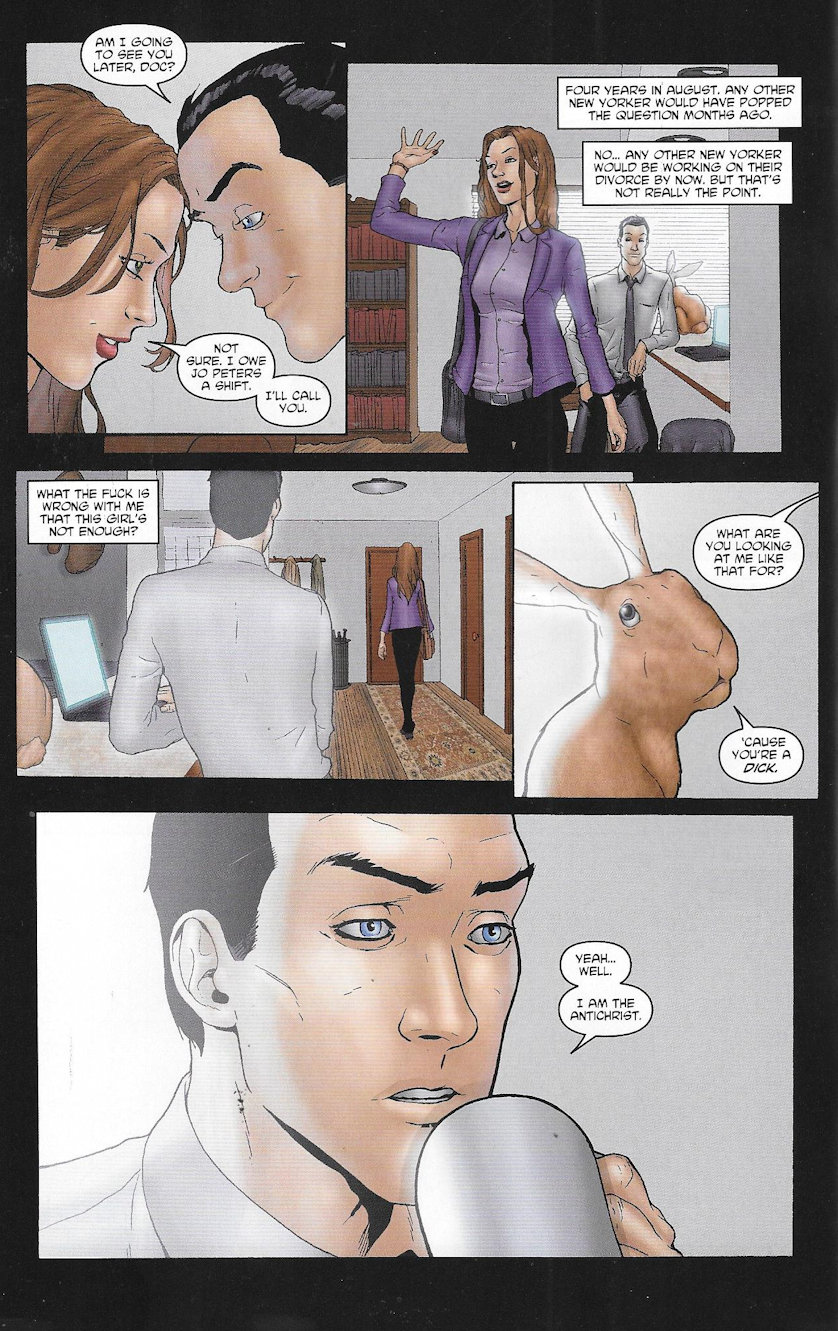 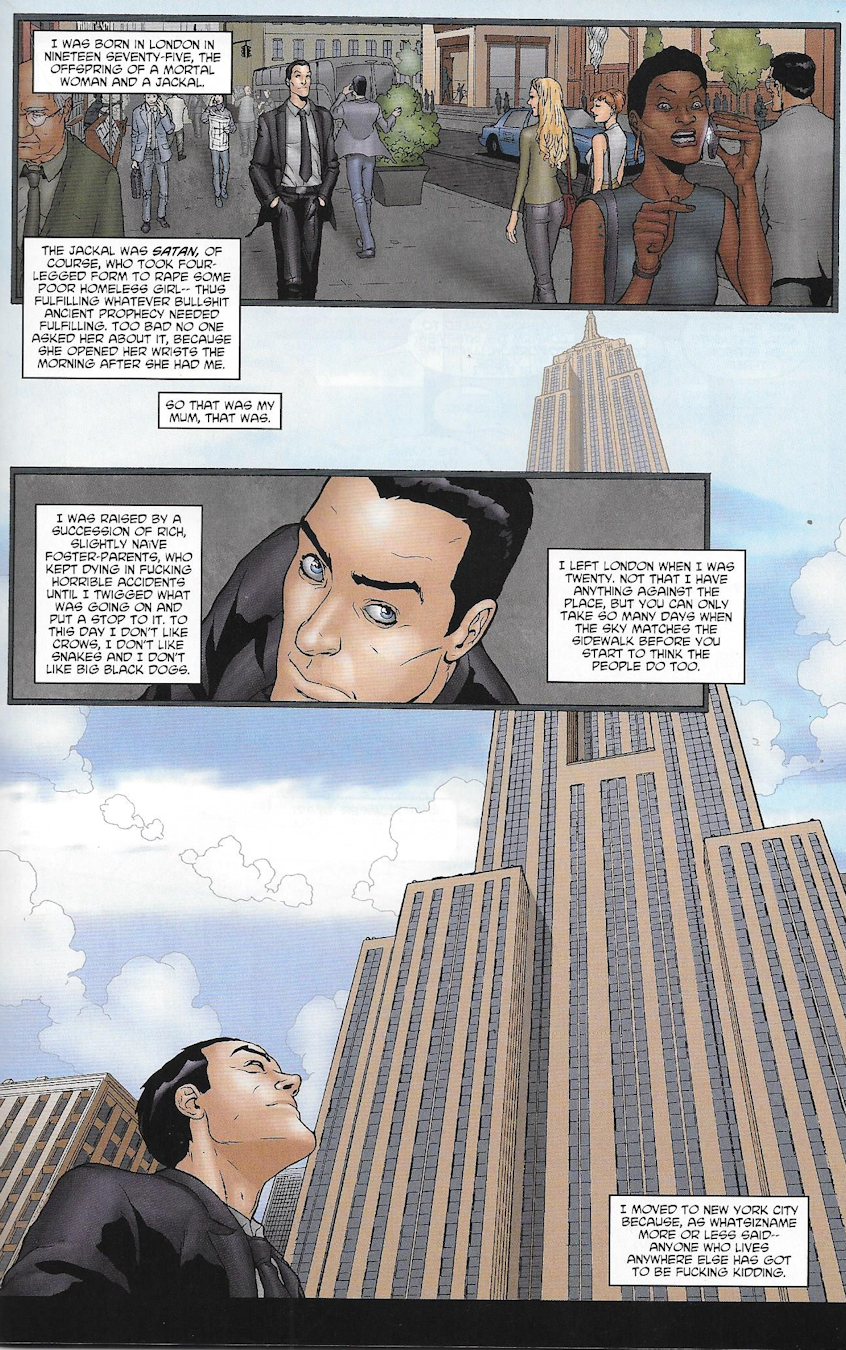 The next two pages confirm that. He may not be morally upstanding, but he’s not looking forward to doing “the devil’s work,” so to speak. He’s just an above-average joe, with a dash of powers and a want (like so many Ennis protagonists) to go against the world’s grain. 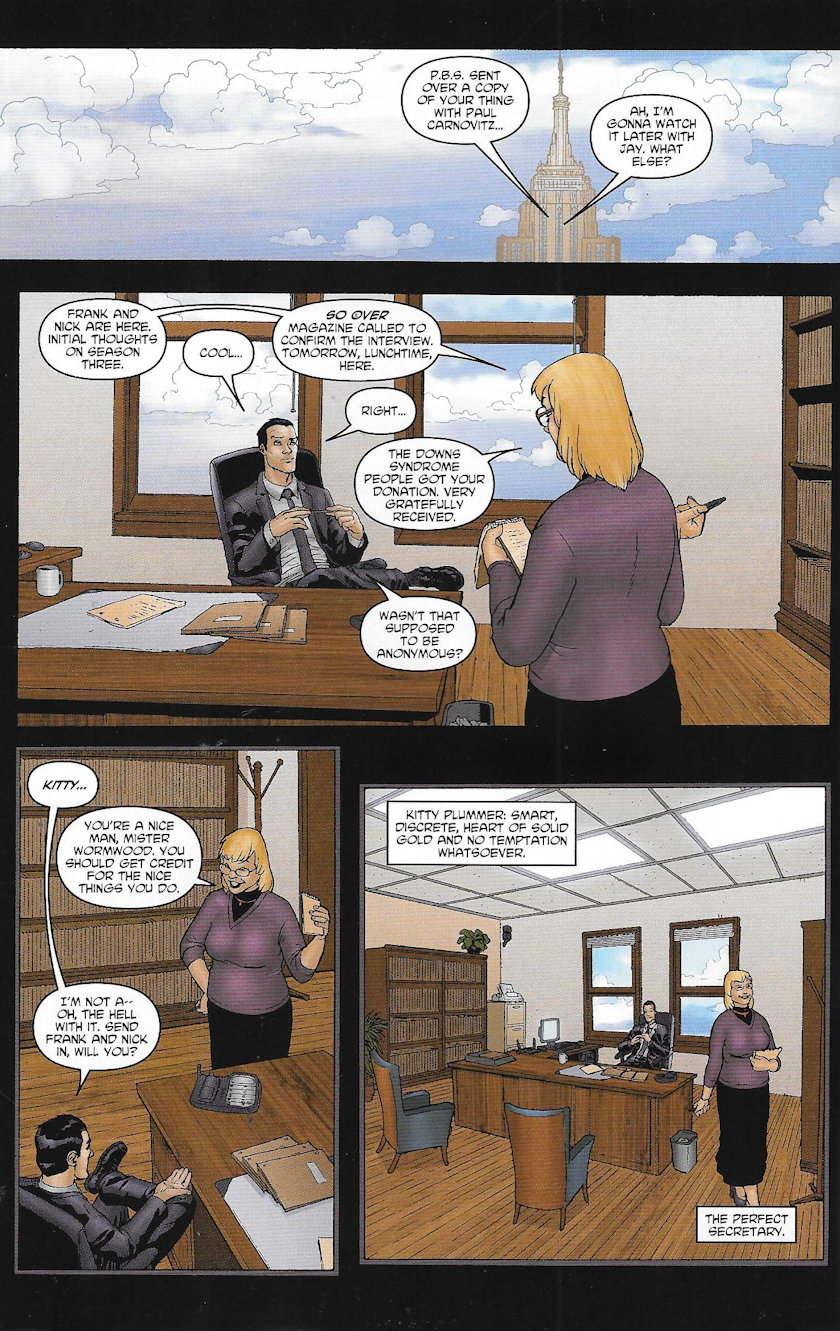 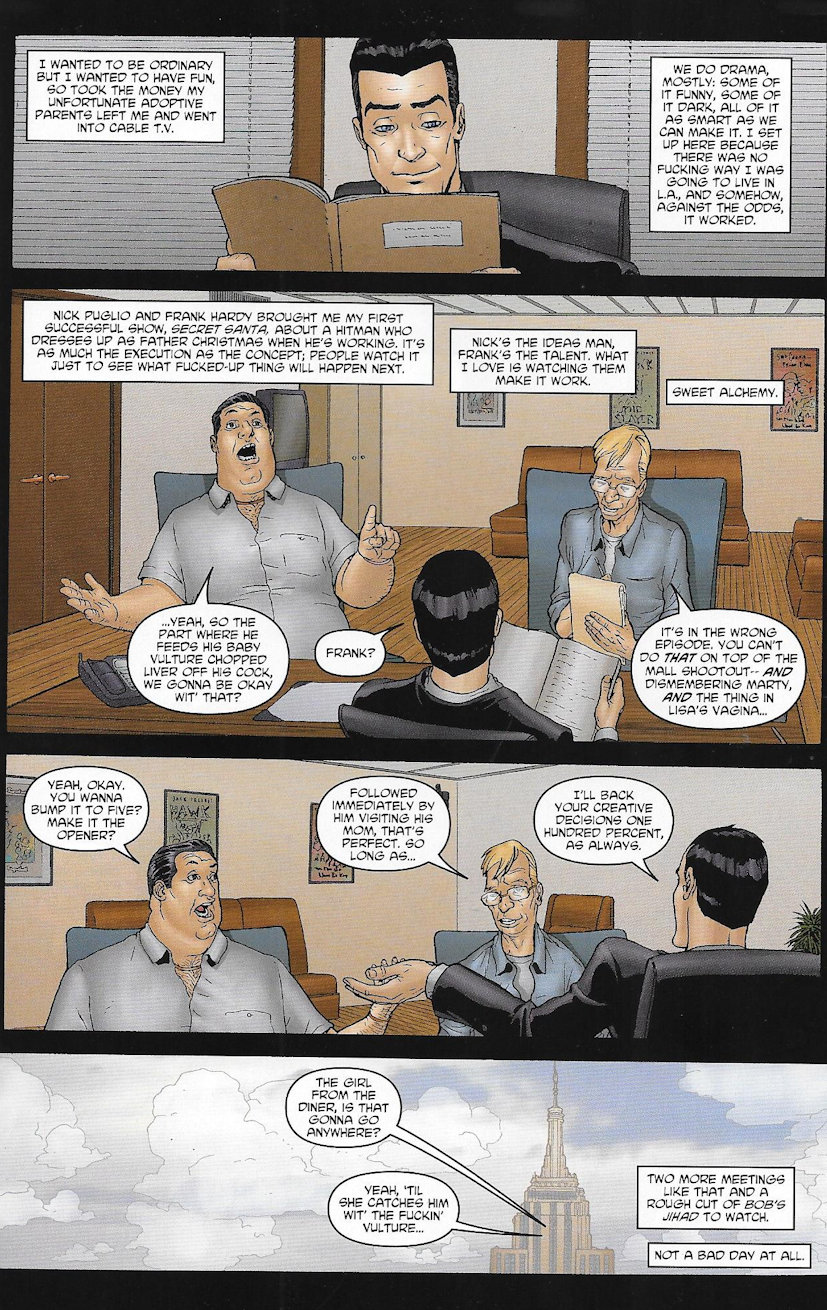 Yah, see he has rejected his dad’s plans. Instead he’s trying to let the world figure its own path. Wormwood just wants to be a television producer who creates intelligent programing and uses his money to fund humanitarian efforts and give to charities. Not only that, he’s a good boss who lets his employees do what they do with little to no interference.

Yeah, this is Ennis doing what he does: taking a trope and playing it against type. I enjoy him precisely for this reason. It’s good to twist the stories around. It makes certain we question our morality and the things we believe in. To wit… 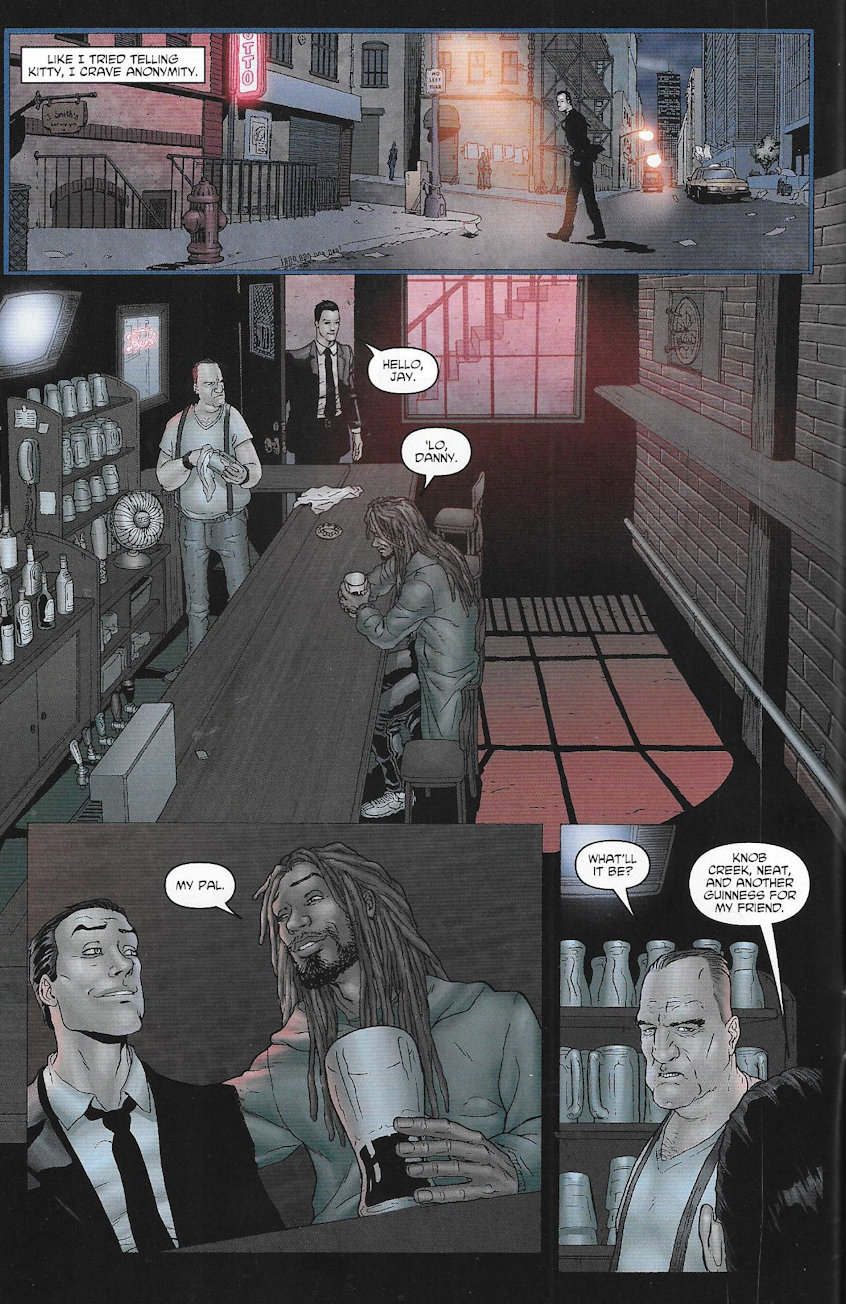 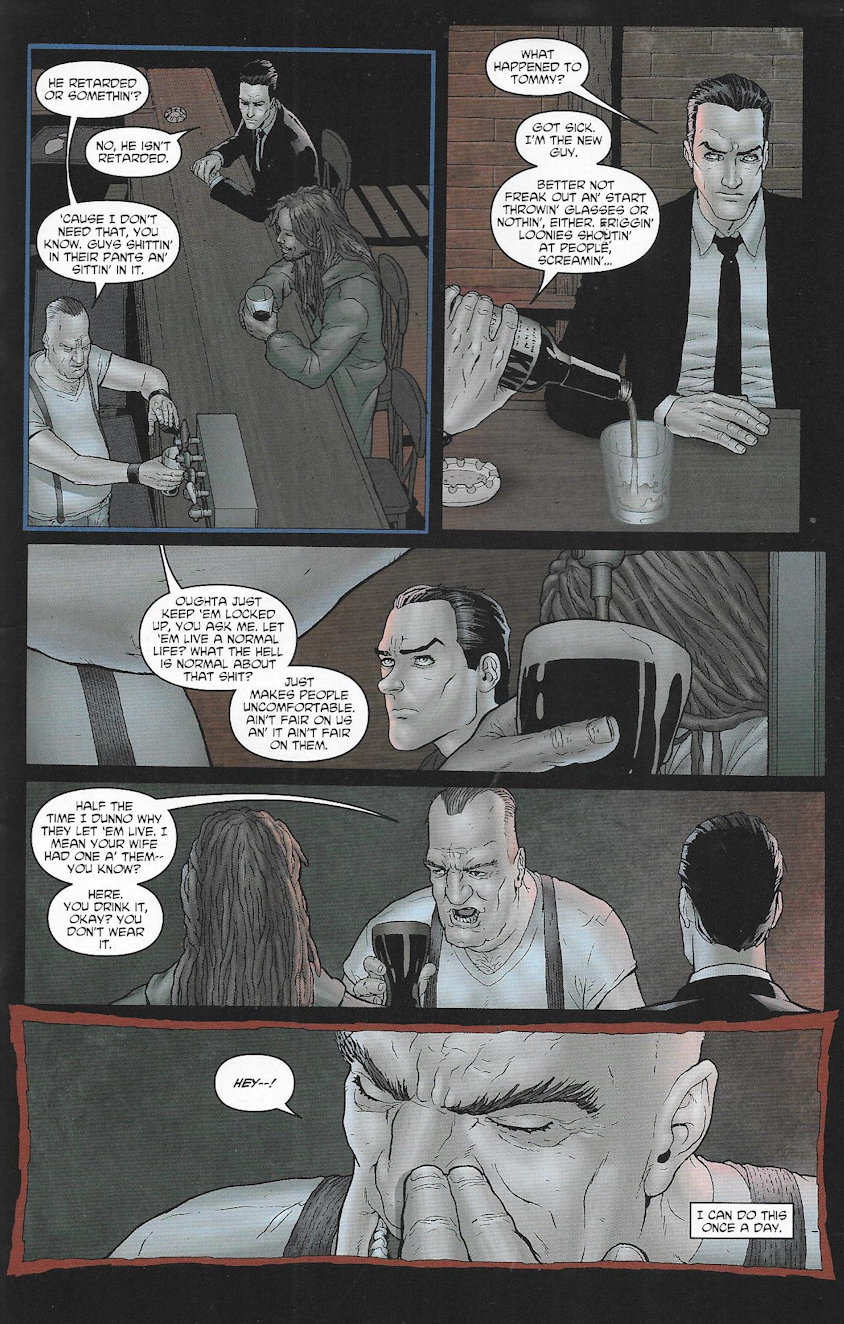 Next we have our antichrist Wormwood visit his pal “Jay” in a bar. Jay seems a bit slow, but the bartender who is being a dickhead appears slower. 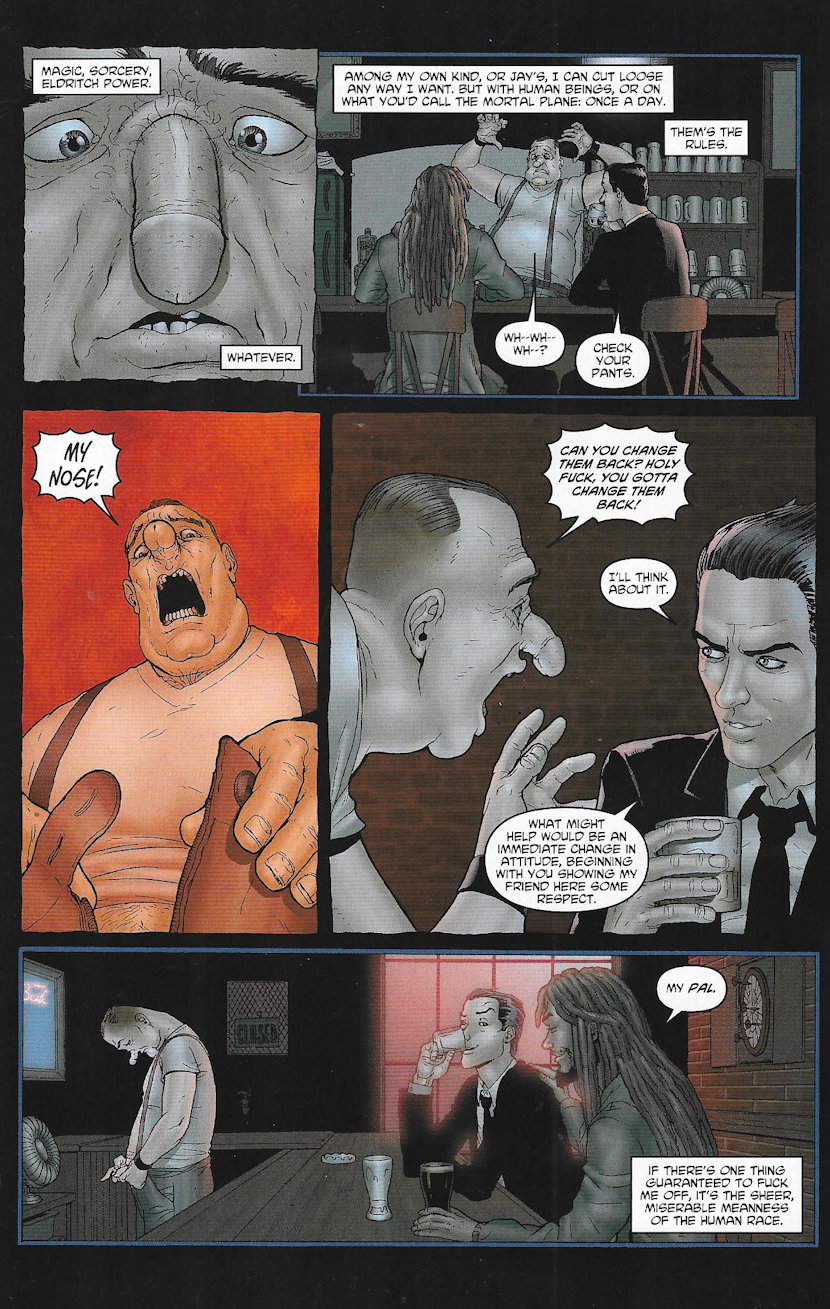 Make that “dick nose”. Like that we get this as a bit of exposition on “the rules” of this book. 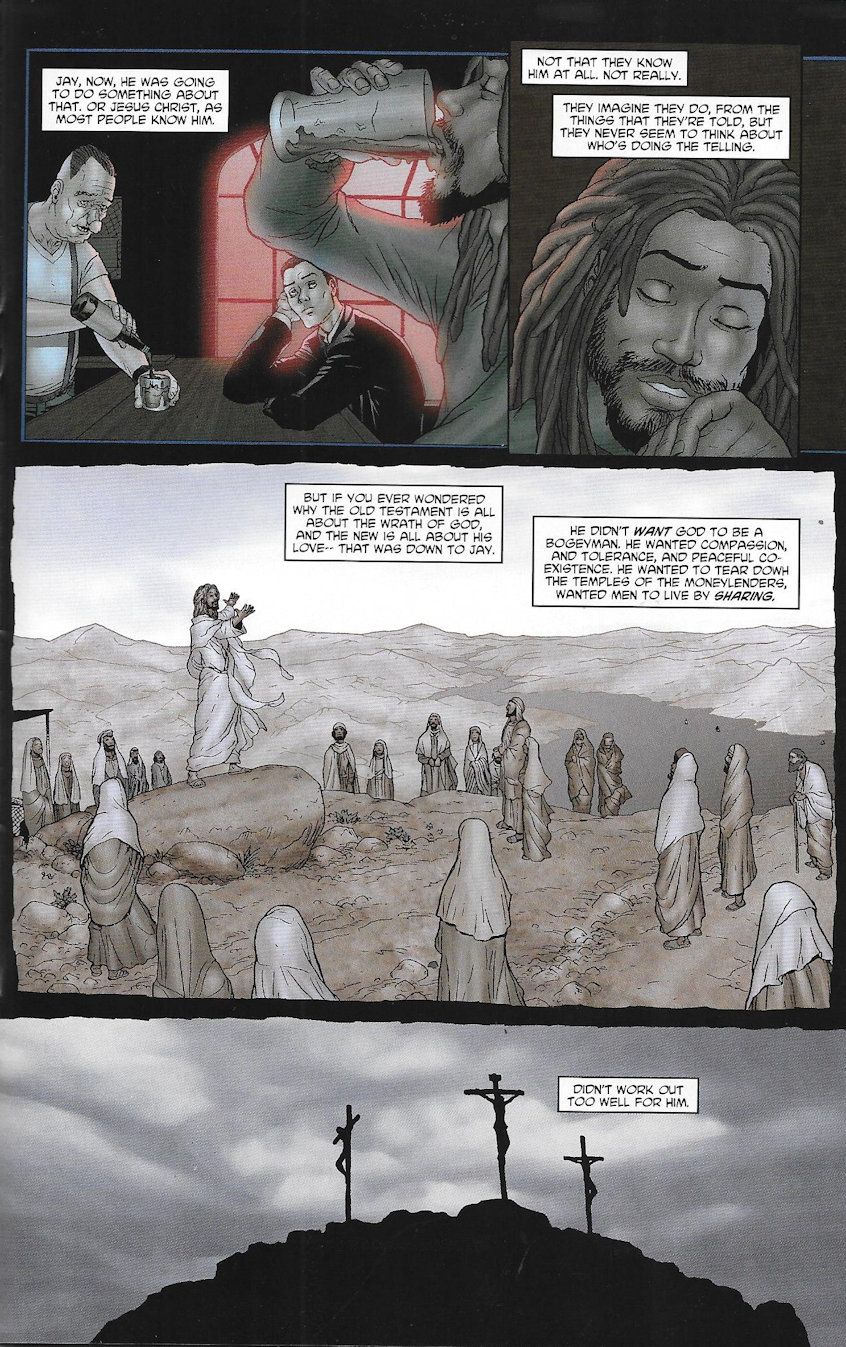 All of which leads back around to Wormwood’s defense of his friend Jay, whom …come on now, you get it, right? It’s Jesus. And the take on the character here works out very on brand. He’s the socialist who tried to get people to see they should help everyone and got crucified for his efforts. 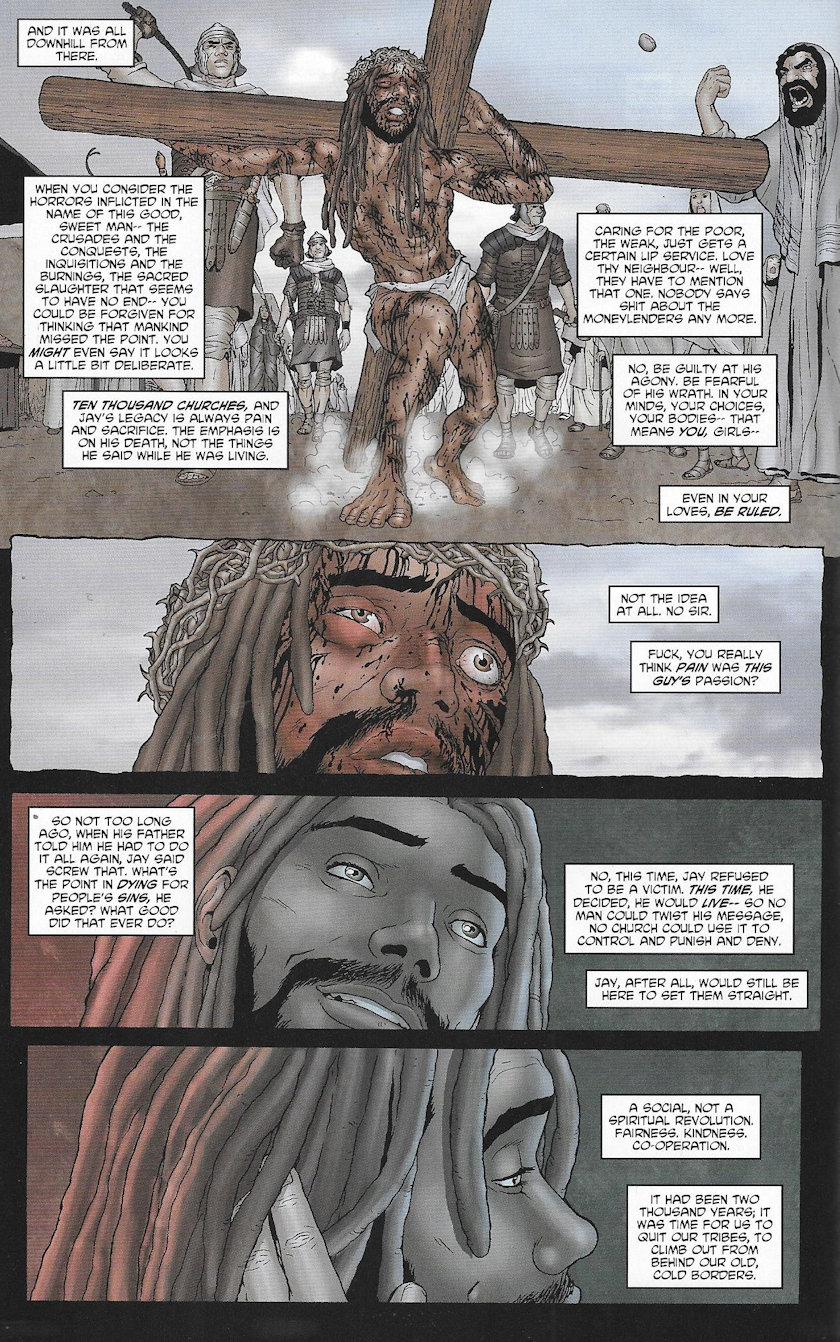 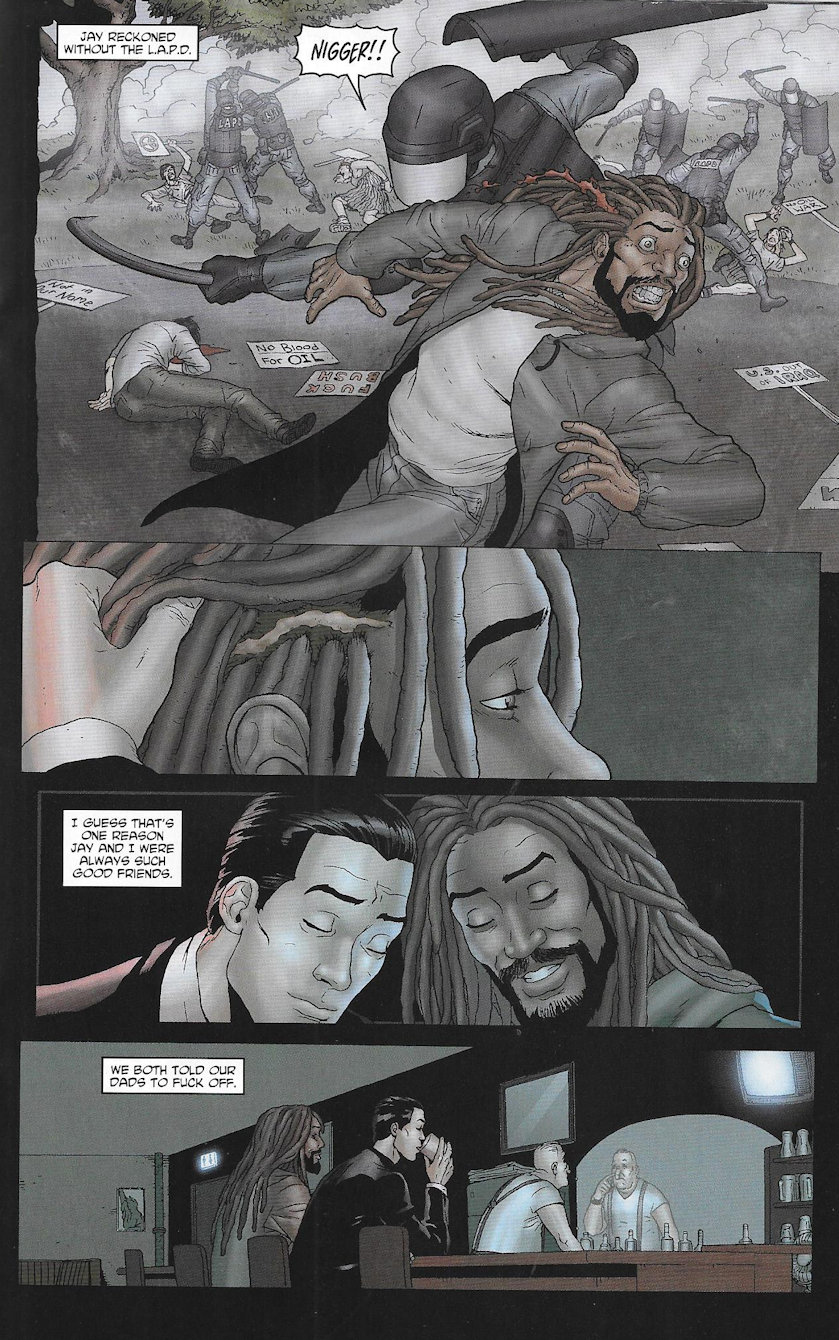 Seems Jay’s dad asked him to do it all again recently. Jesus said no. Tried to teach people compassion and social revolution and the LAPD gave our Lord and Savior brain damage for his efforts. Which is the link the two of these character share, a distain for authority figures who tell them how it has to be. 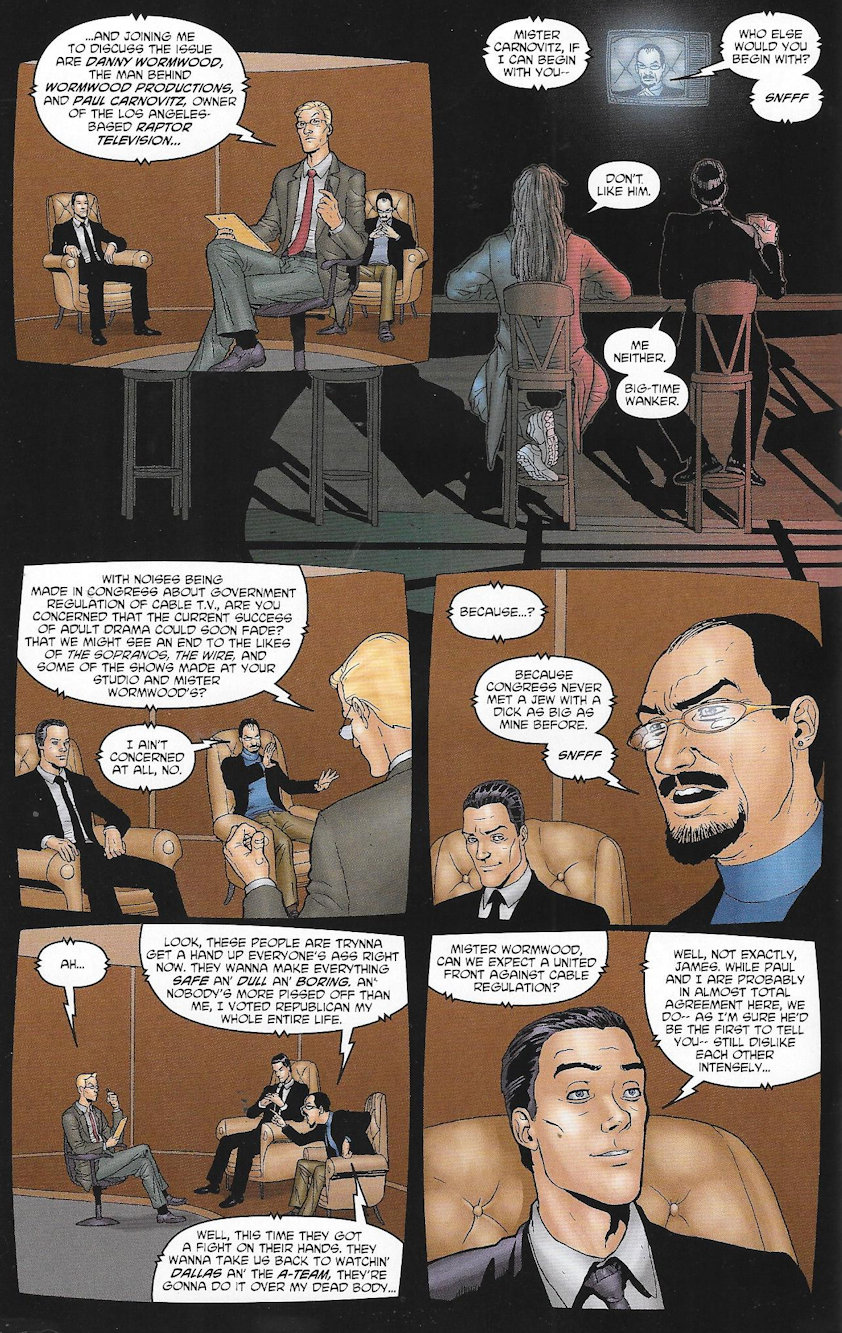 Also they hate ponces like Wormwood’s competitor, cable network president Paul Carnovitz. I’ll let you clue yourself in on why that is though. 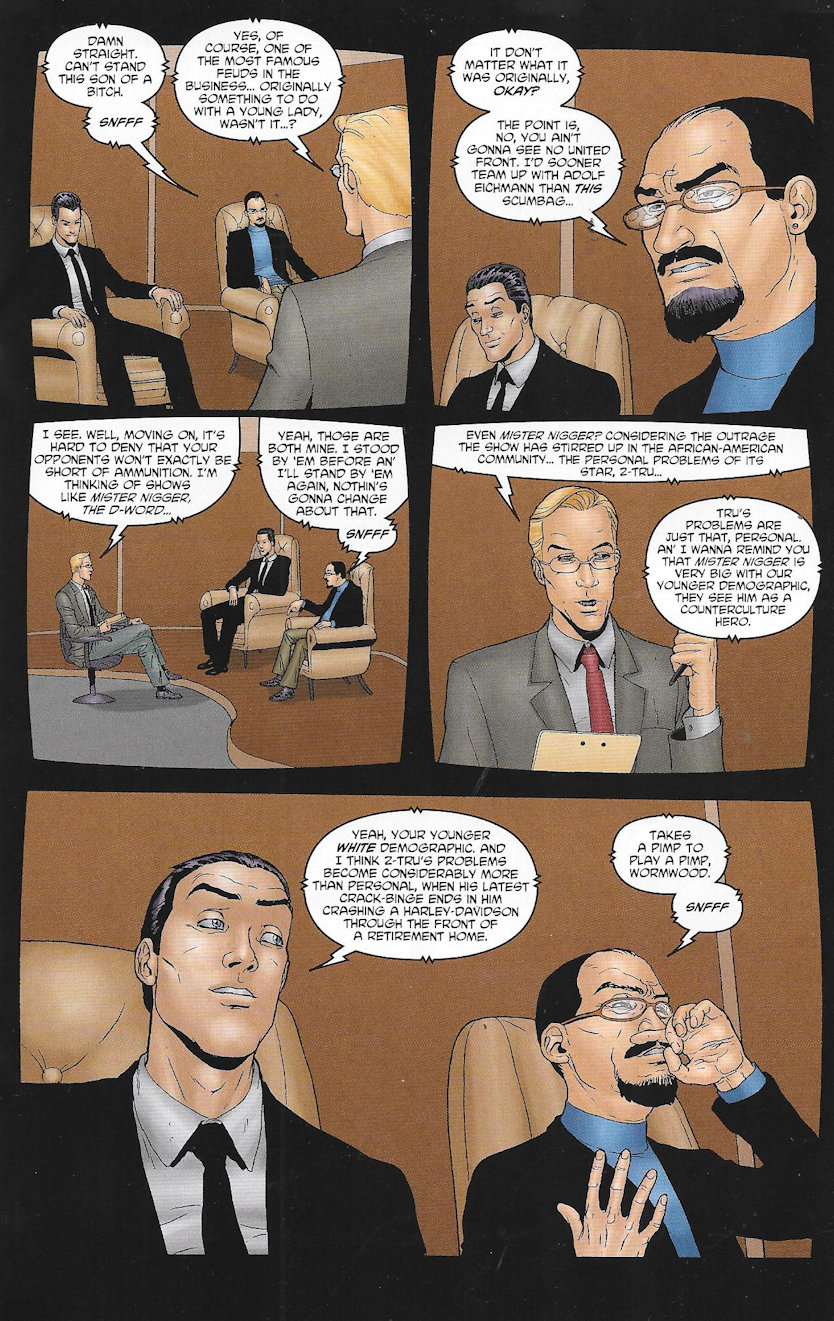 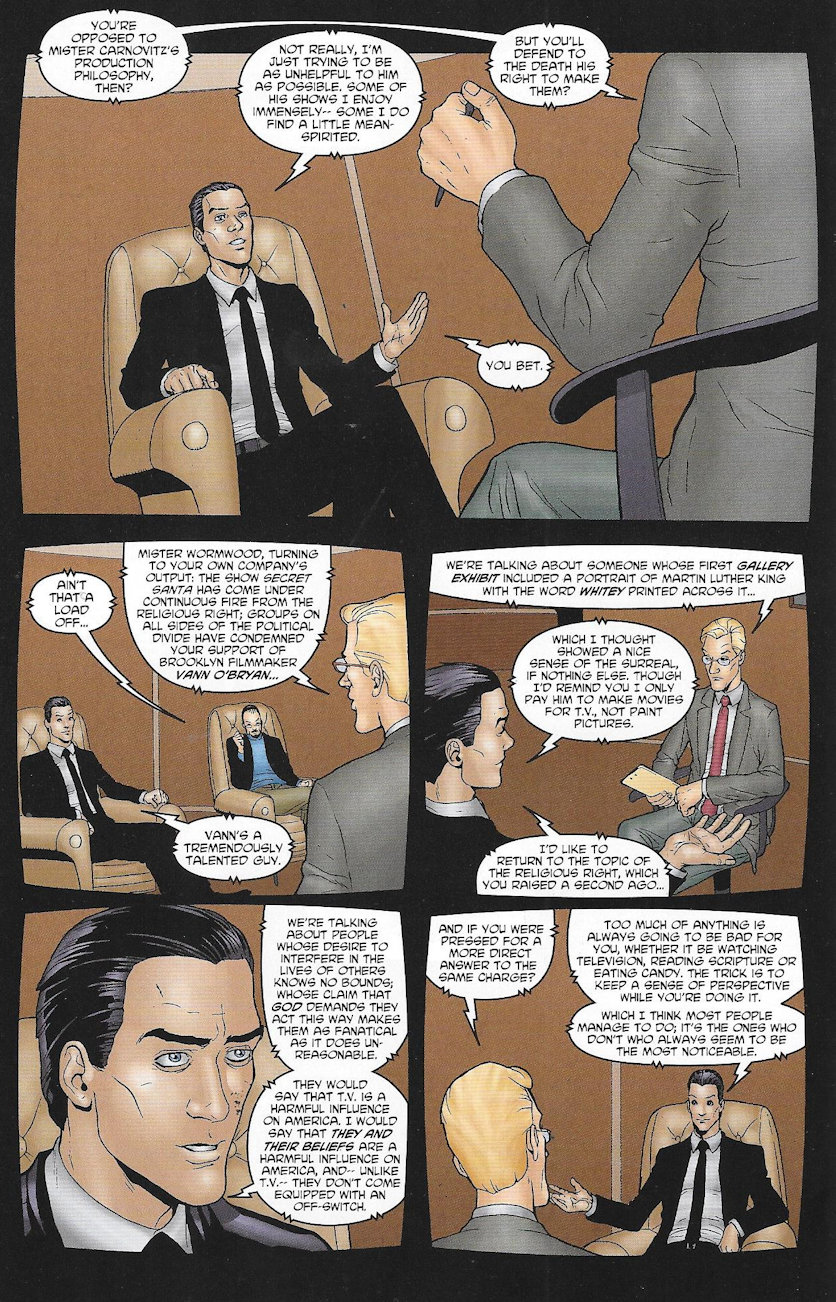 Yeah, he’s an asshole of the first rate order, doing the opposite of what Wormwood does with his airtime, which is playing to intelligence. Carnovitz is pandering to the worst of human instincts. And he’s a drug user to match. 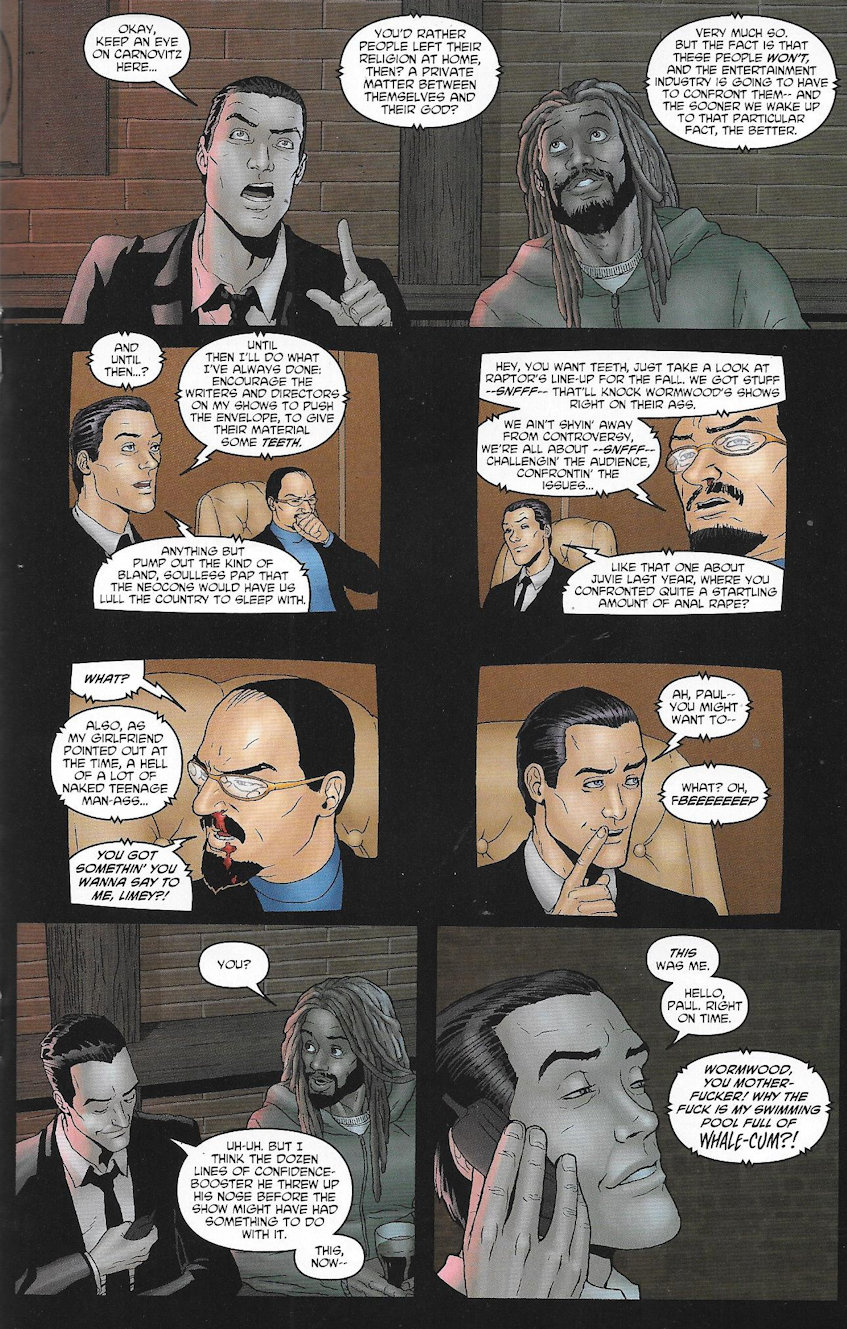 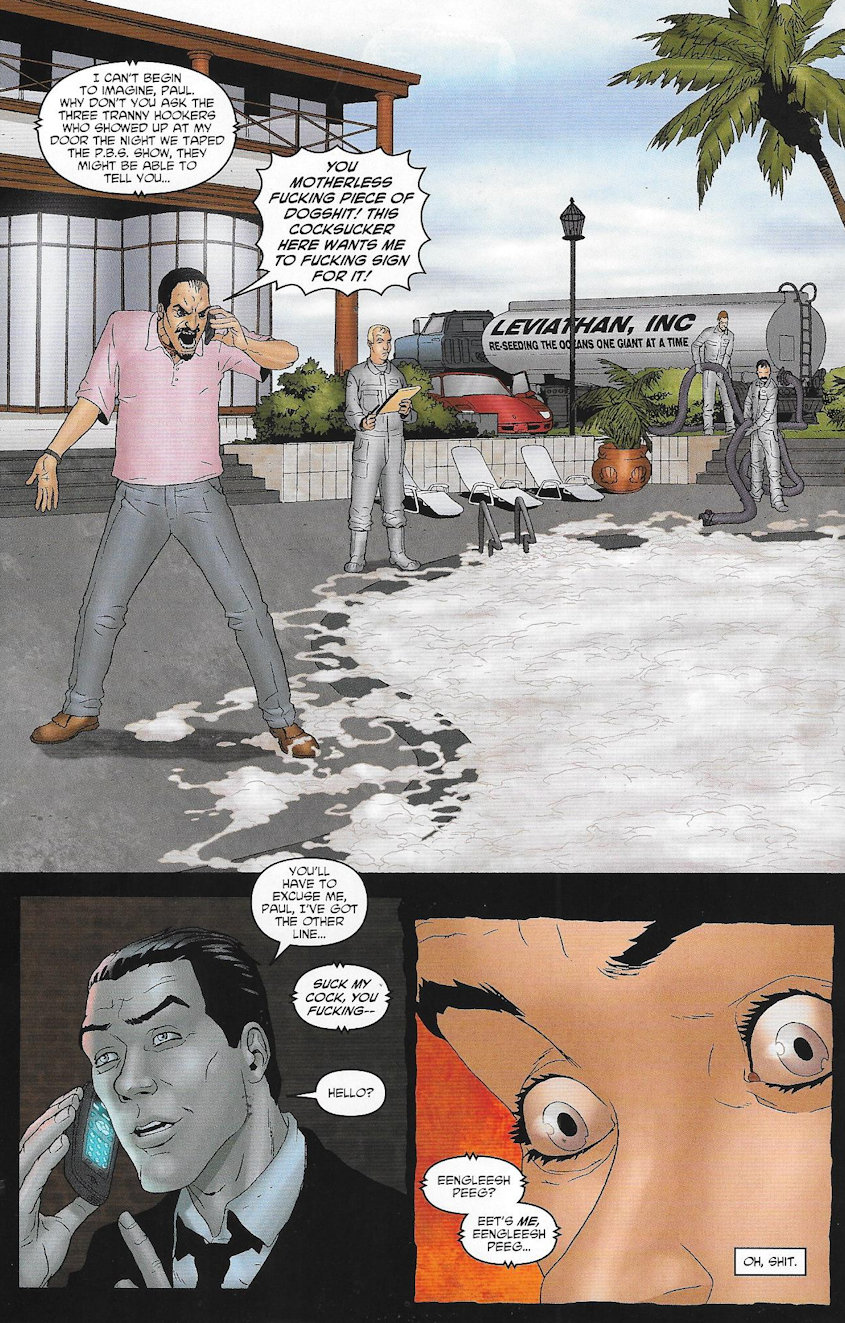 Sadly, Ennis has to give our hero some kind of weakness or moral failing, and that comes by way of him fucking Joan of Arc on the side. Not certain why two Devil books in our series has to feature this French revolutionary so prominently, but there you go. 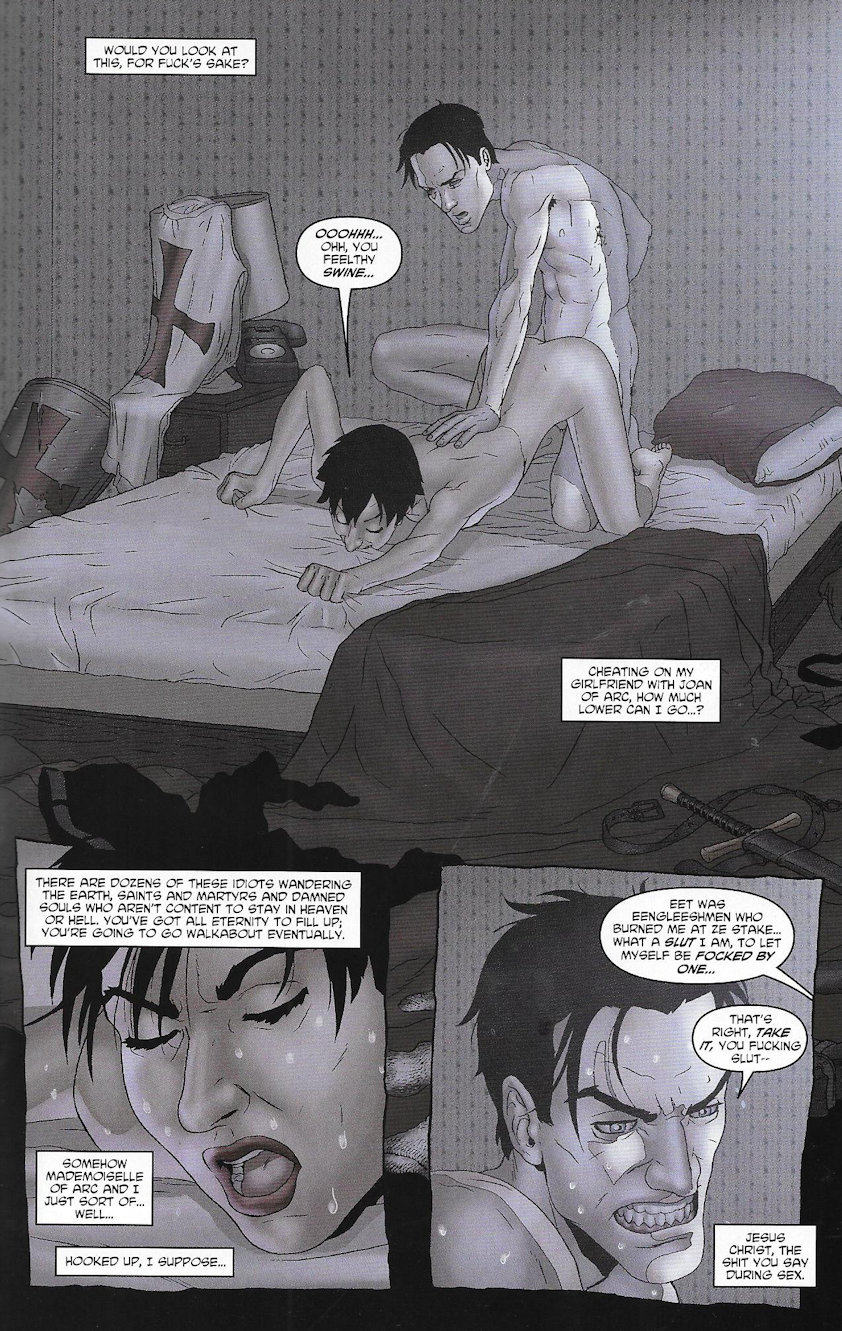 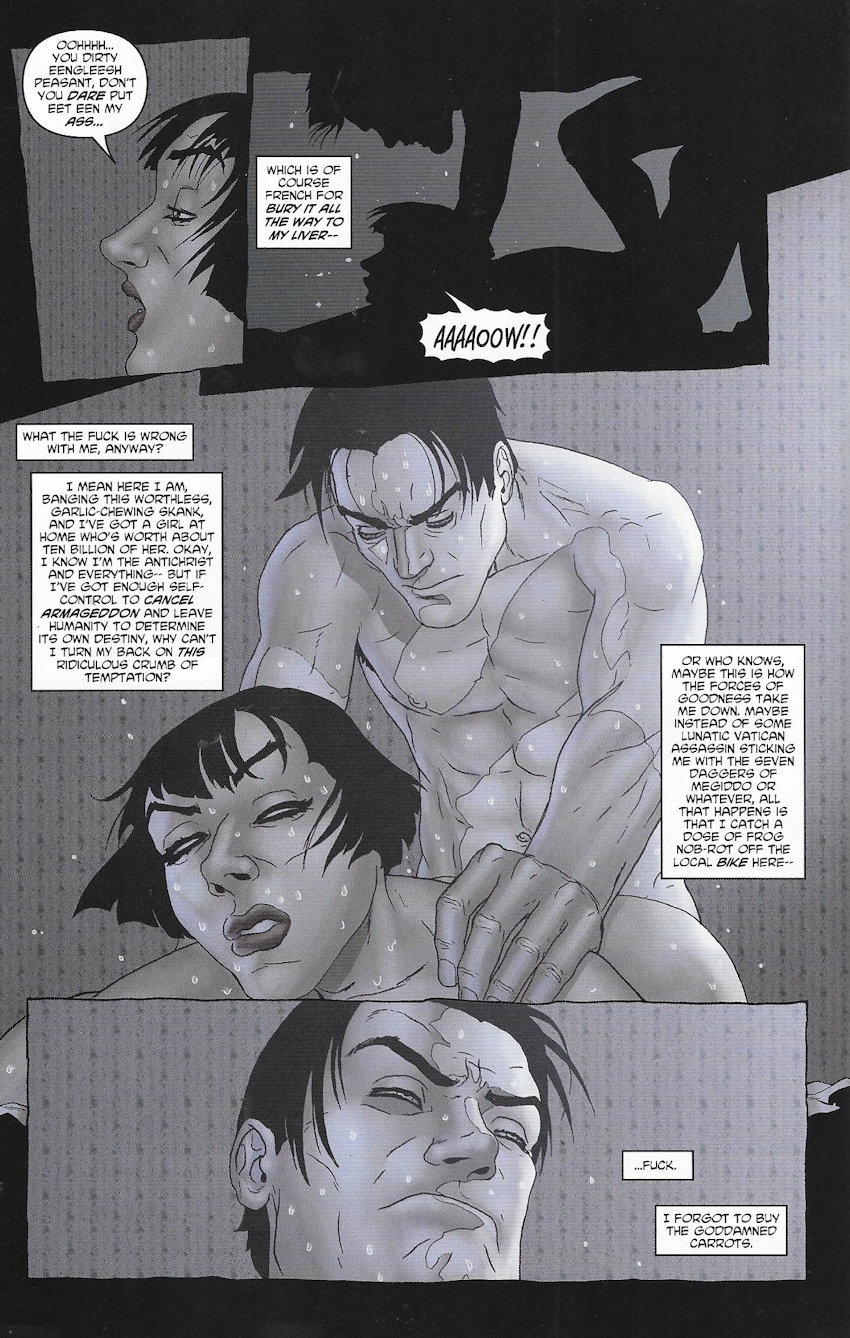 And as Wormwood arrives back home he finds a surprise visit from dear old dad, an event that leads into next issue. 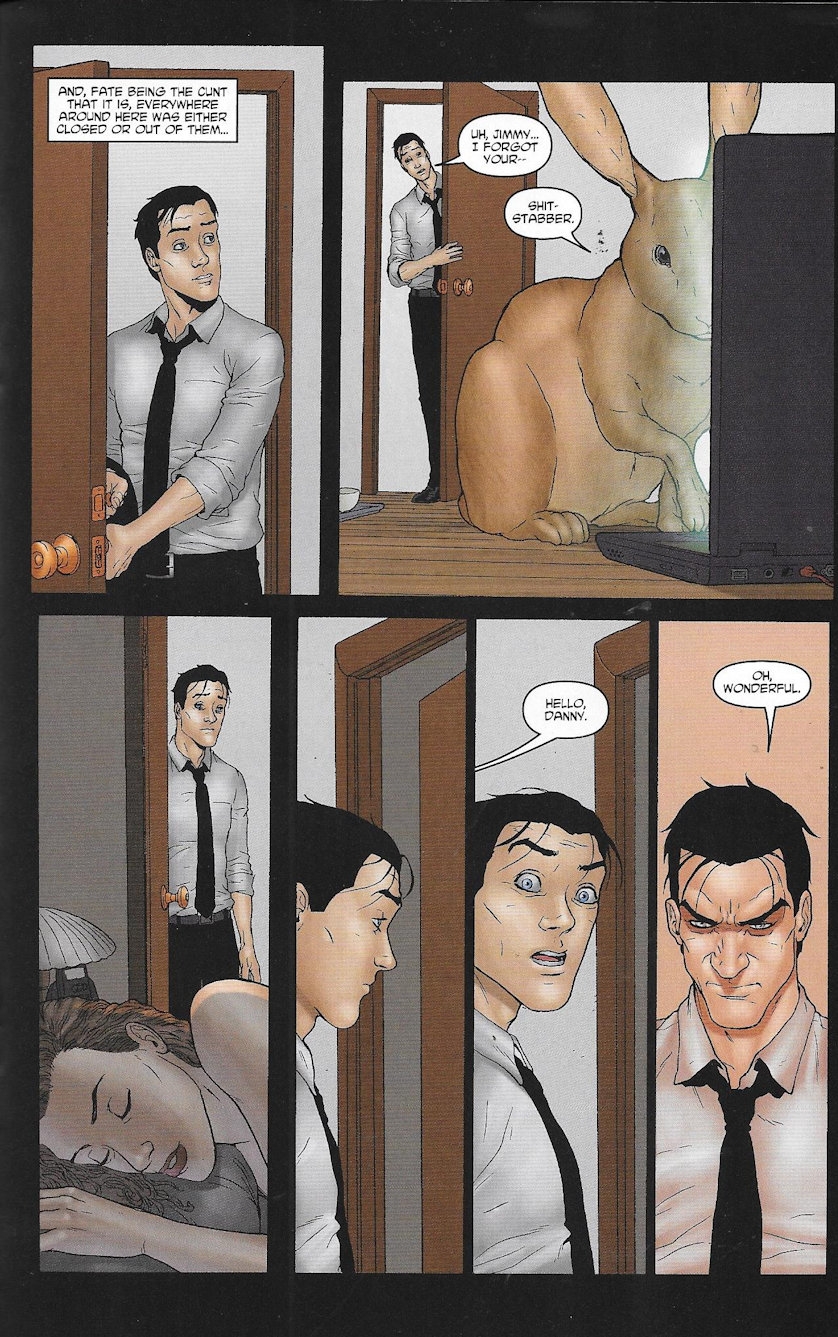 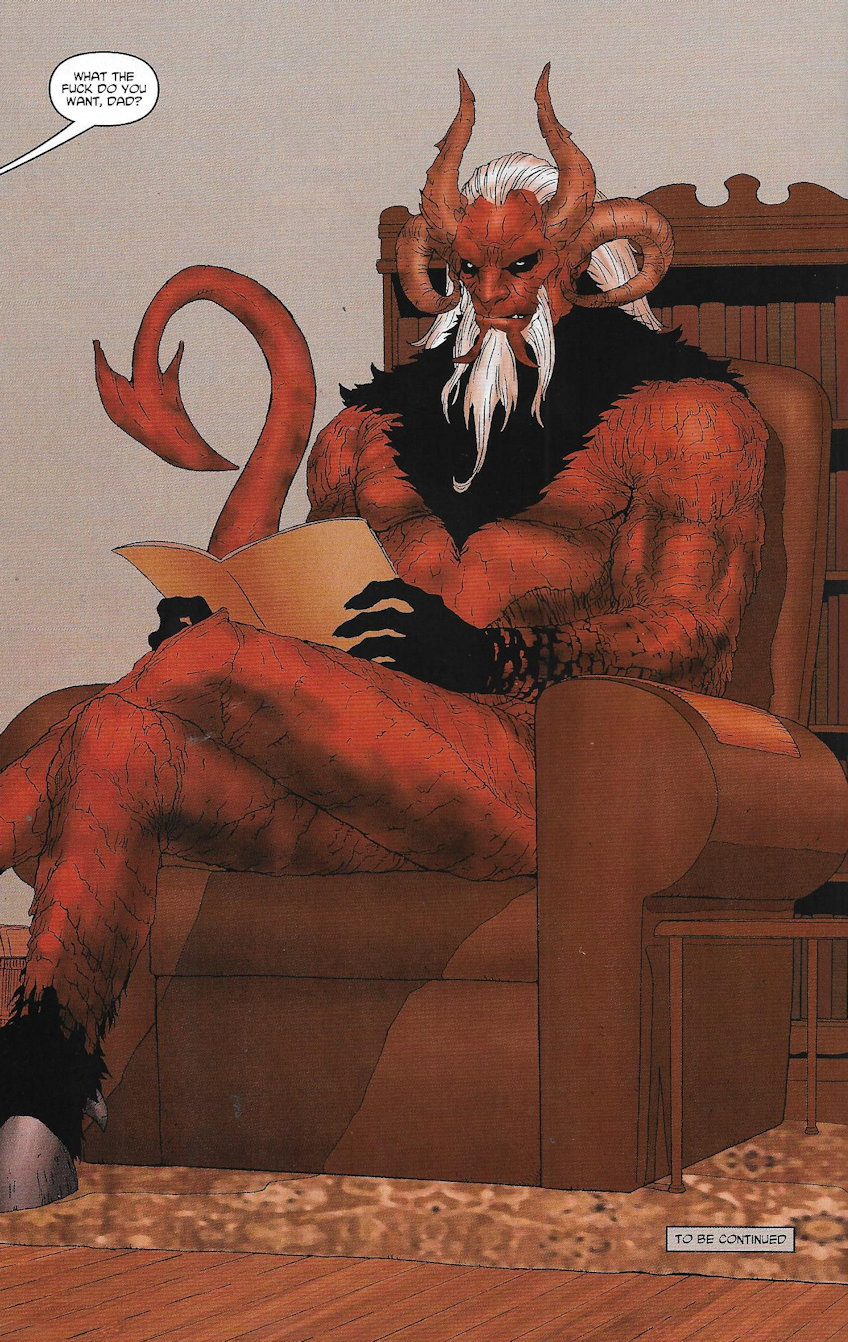 In truth, I enjoyed Chronicles of Wormwood quite a bit, but for me the art by Burrows falls below his work in The Courtyard and Crossed. There is a short-cut style to all of it with lots of bare backgrounds that make the work feel a bit unfinished and sophomoric. Burrows has proven he can do better. In all, the book is still something the Crapbox recommends. Get them where you can.