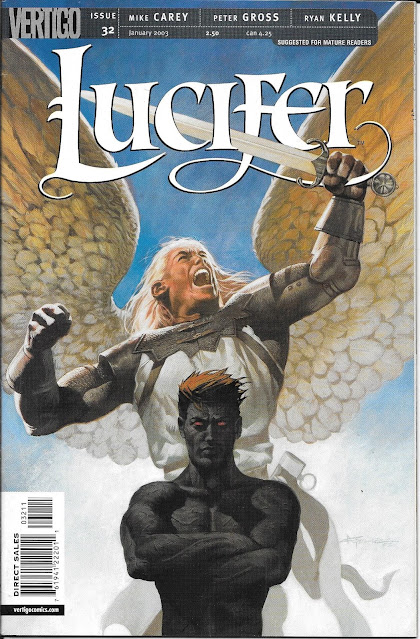 A friend of mine keeps telling me to watch Lucifer.

It would take nothing but a few hours of my time to get hooked on it, she says. And then she lays out the premise of the devil getting bored of Hell moving to LA, opening a nightclub, and then solving mysteries while creatures from his realm wander in and out of the storylines.

And while that sounds appeasing, it is a far cry from what the DC/Vertigo Lucifer comic book the show is based on uses as plot hooks. In the comic, we see Lucifer after he leaves the throne of Hell in the pages of Neil Gaiman’s Sandman and yet still resides in Hell, pulling the strings of various factions and causing general mayhem, just because.

The two don’t appear to be dealing with the same concepts even. And while I enjoy a series that takes familiar characters/story and changes up the details a bit (see Ellis’s The Boy vs the Amazon Prime show of the same name), I feel that these two properties could not be much farther apart if they tried.

I am intrigued more by the Lucifer comics than by the TV show. Sadly in crapbox terms it is easier to watch the show than it is to find connected issues of the book. I have an odd half-dozen of the comics, but they range from vol 1 and vol 2, both different in tone and yet not different in numbered sequence. In starting this review, I tried to catch up and found myself getting thoroughly confused by the mingling of storylines before I discovered my error. Needless to say I corrected quickly.

So we are jumping in on the last issue of a four part tale in the third year of Mike Cary’s run in volume 1. This is generally considered the better of the two volumes and I like to start at the beginning where I can. I could have gone with an issue earlier on, but they tended to confuse me. Like walking into a party where you know none of the other guests, I found the earlier issues I have dealing with lesser characters that for all the emotional punch of their struggles, I had no idea what the stakes were that they were fighting for.

Here at least I get it: a straight-forward fighting issue for the most part and as good a place as any to land this review. We being with Lucifer about to start a battle witnessed by the hordes of Hell, so we know the stakes have to be pretty high. He’s battling this devil-angel guy named Amenadiel, who can fly and has a box with a piece of Lucifer in it that will act as a compass to Lucifer Morningstar’s location. 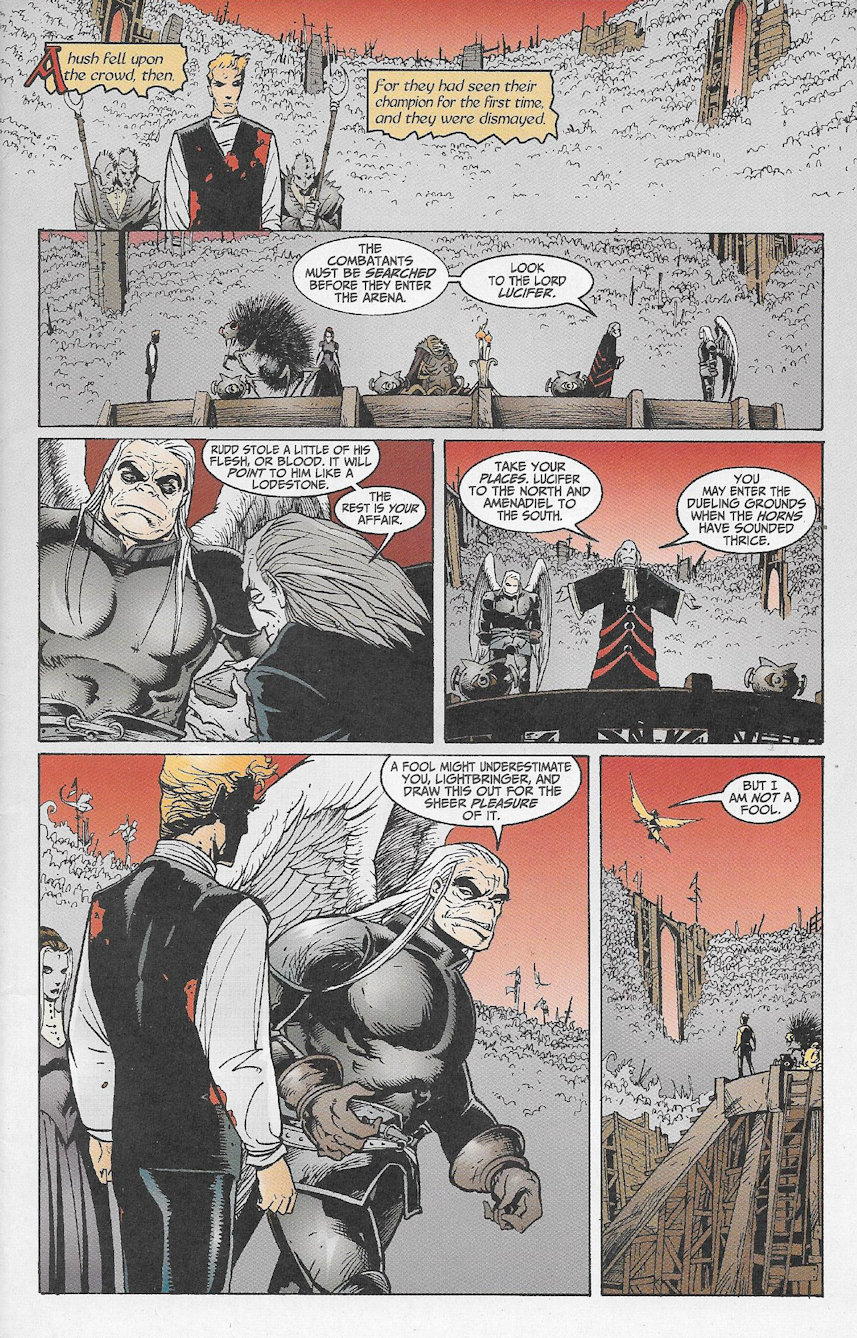 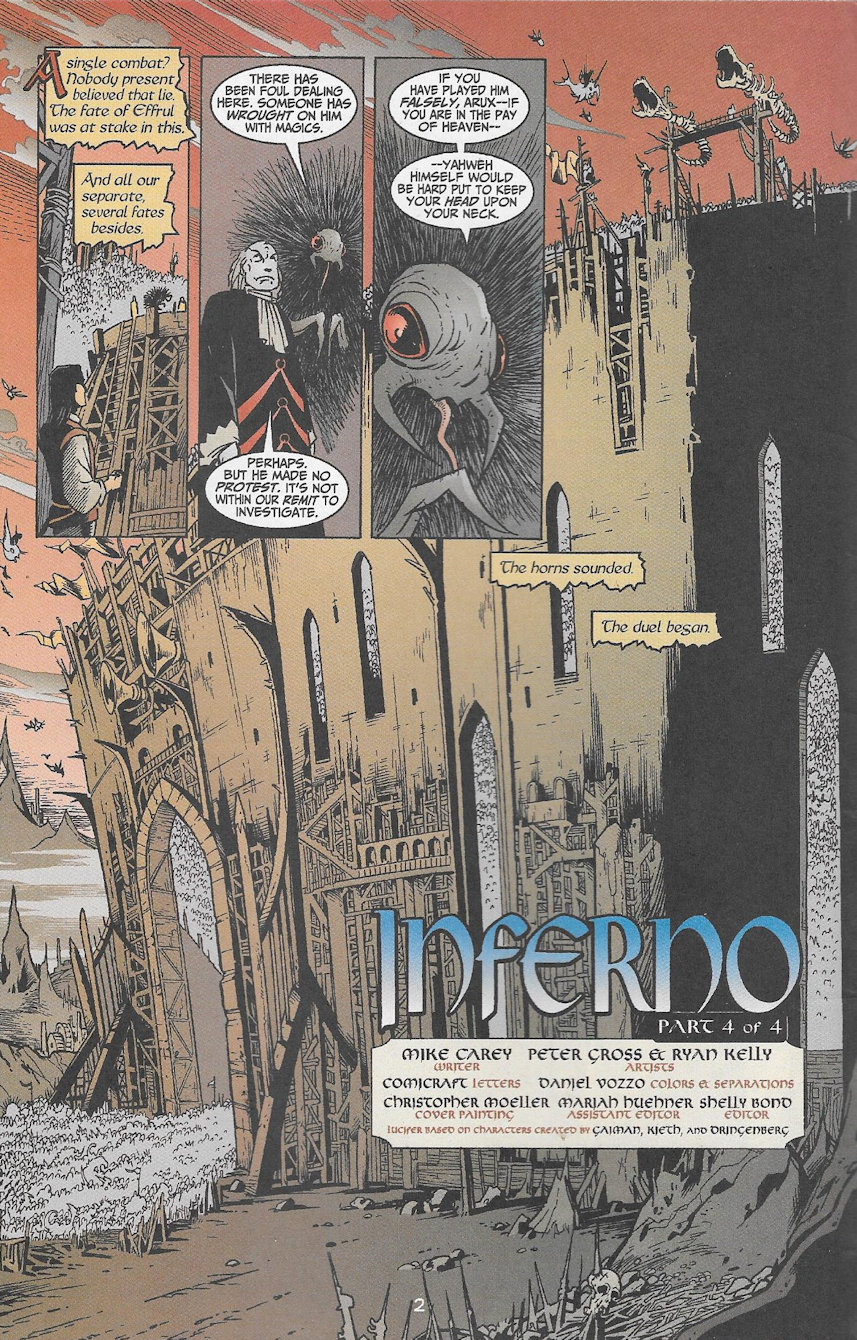 The horns blast and Lucifer is left to wander the twisted landscape outside the arena while Amendiel searches for him from above. 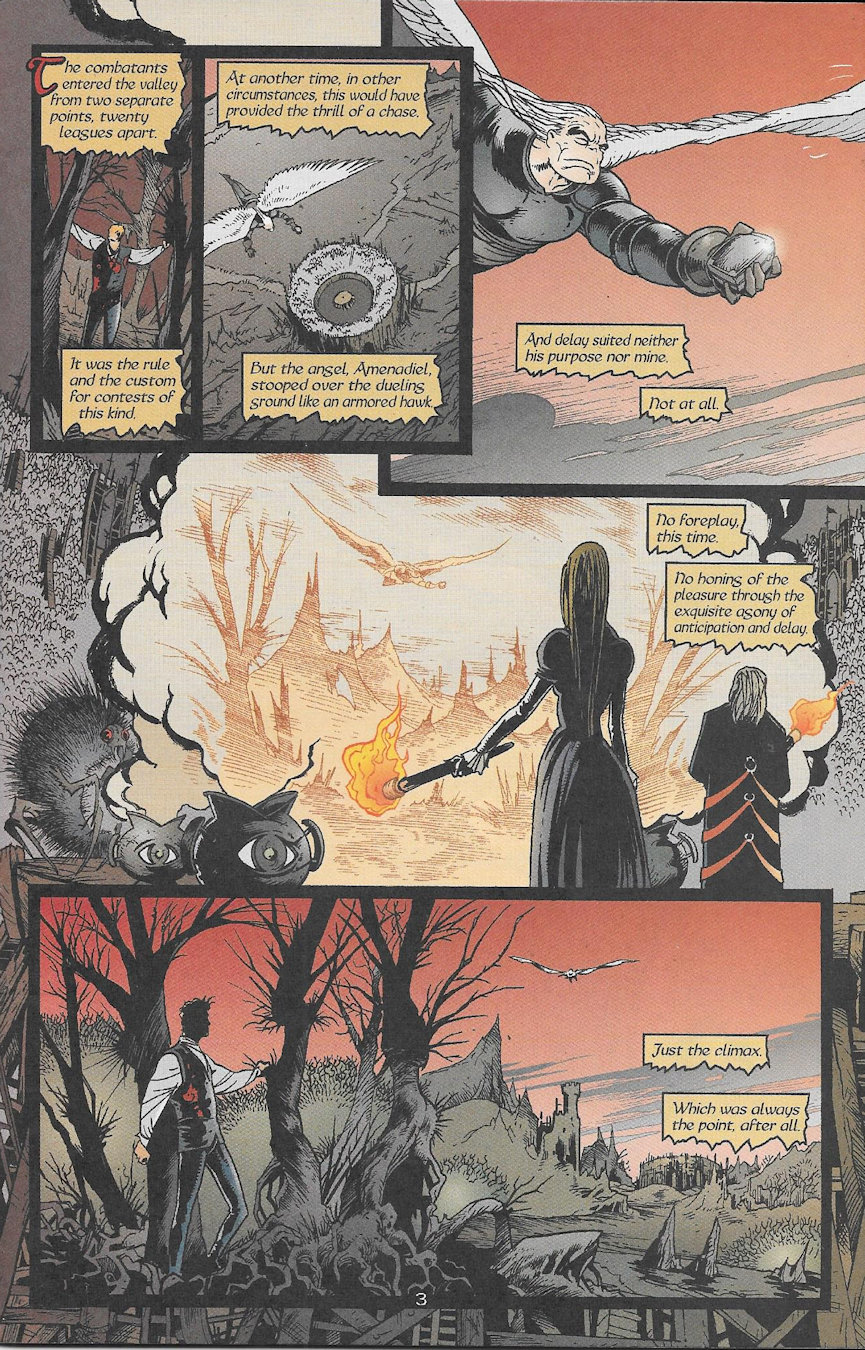 Now we swap over to an ally? of Lucifers…maybe? I don’t really know. What I know is what’s on the page. This is Mazikeen, a young woman trussed up like a BDSM sub about to be impregnated by this gorilla on a car wench named Scoria. I’m not certain what the implications of all this is, but Scoria wants Mazikeen as his “bride” and to get her pregnant with his seed. Mazikeen wants free and to have custody of Susano, a wizard? Maybe? Who she needs to complete a ritual of some kind…I suppose. I don’t know. I don’t know. It’s a comic that is 31 issues of buildup and character revels. Don’t ask me. It is beyond me to explain. 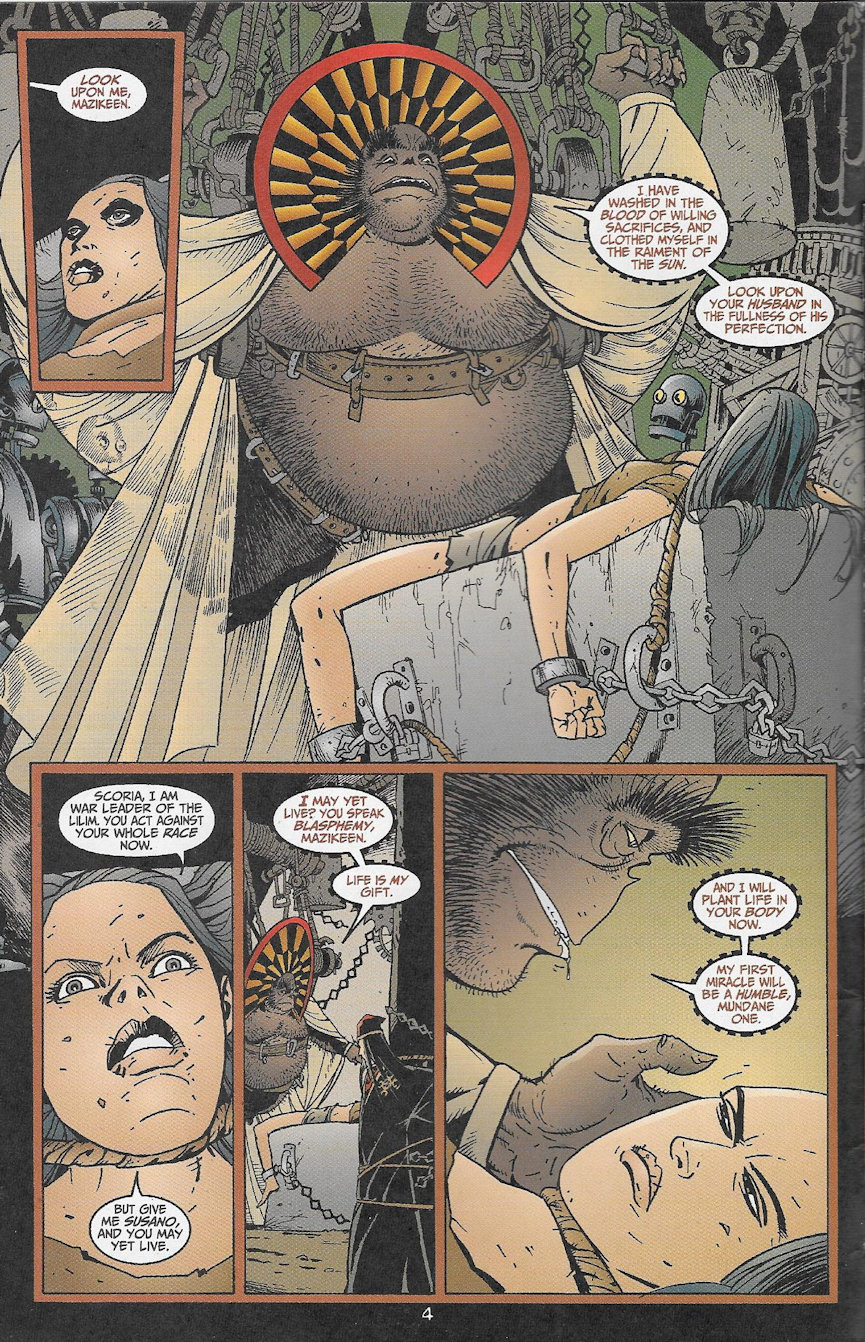 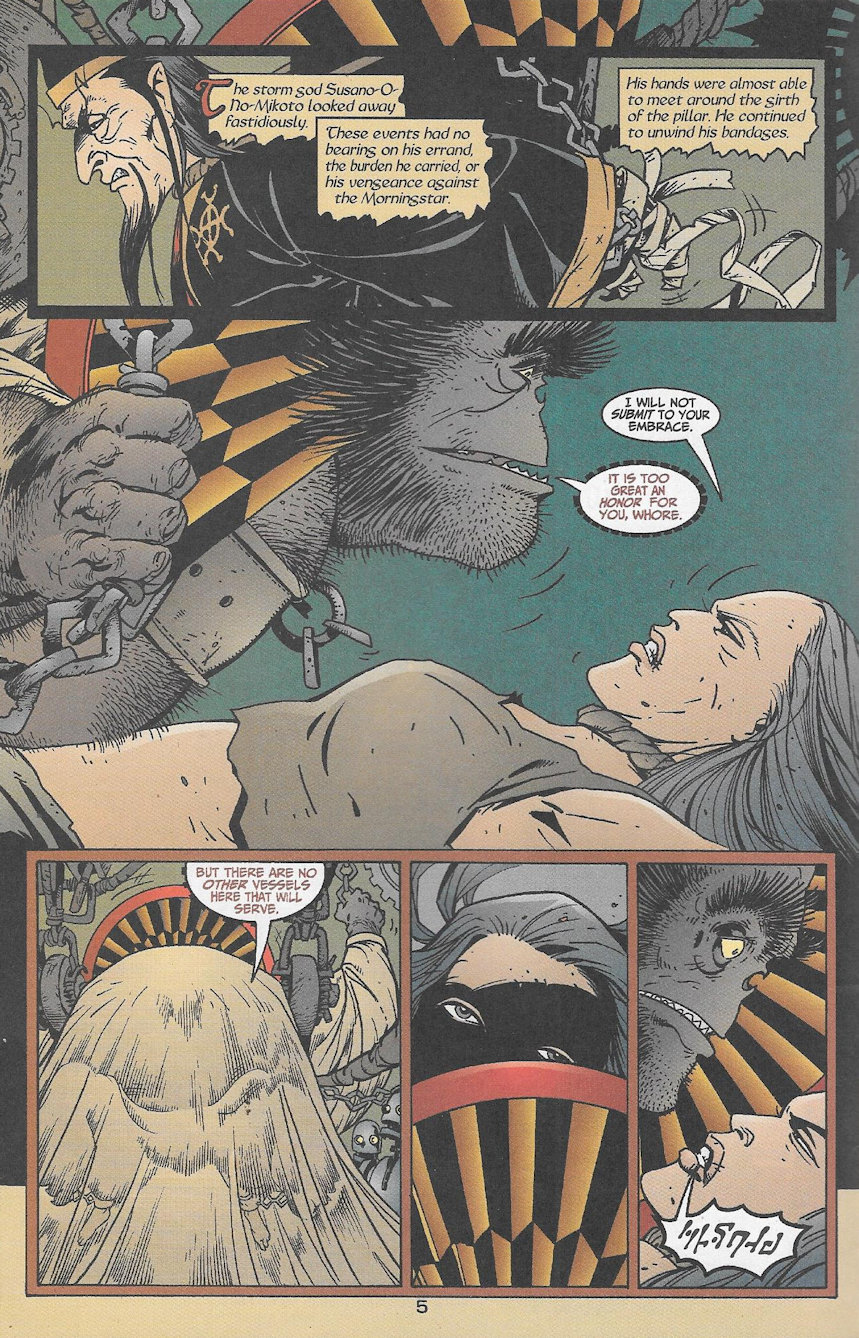 But as gorilla jerk hovers ominously, Susano appears to be freeing himself, Mazikeen starts to magically chant…we switch back to the Lucifer fight, which is something I do understand. Amendiel catches Lucifer unawares and knocks him to the ground. 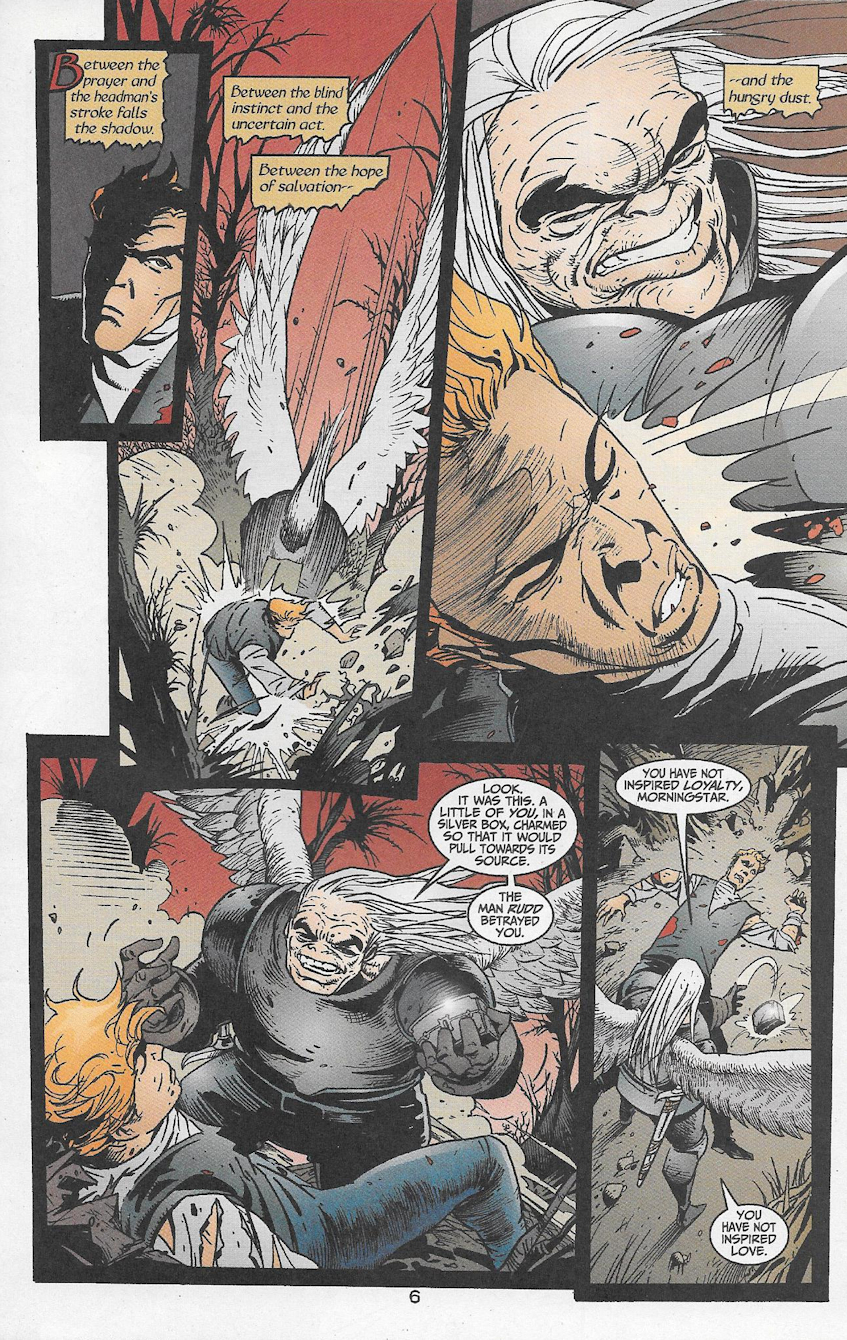 Then the bigger opponent holds him above the ground and rips out his heart. Not gonna see this on Netflix show, I imagine. 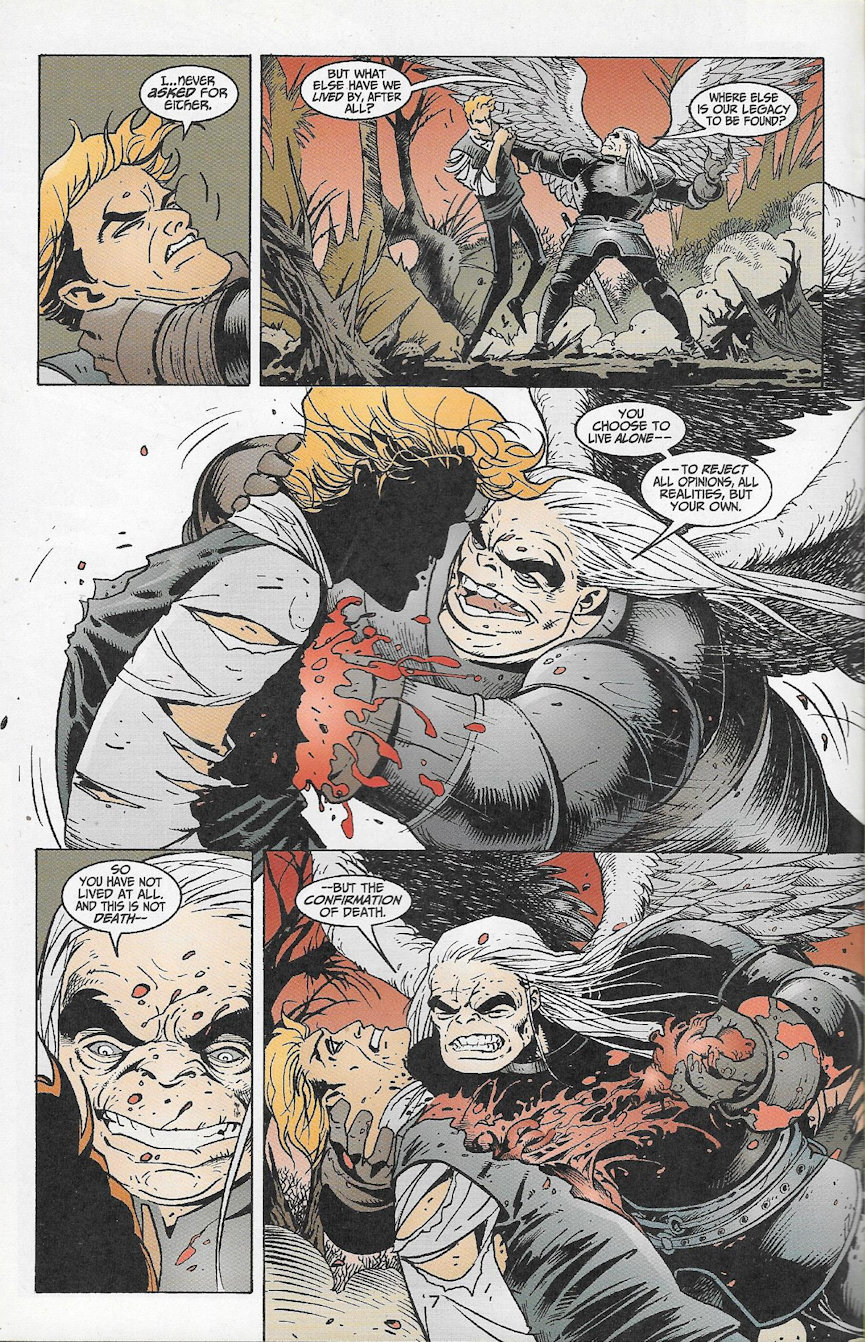 Back with Mazikeen, she’s uses her magic to take command of all the Iron Giant knock-offs standing around Scoria. Their first acts are to subdue the hanging ape devil and to free Mazikeen. Then she has them hand her a big wrench, and she beats the devil to a pulp. 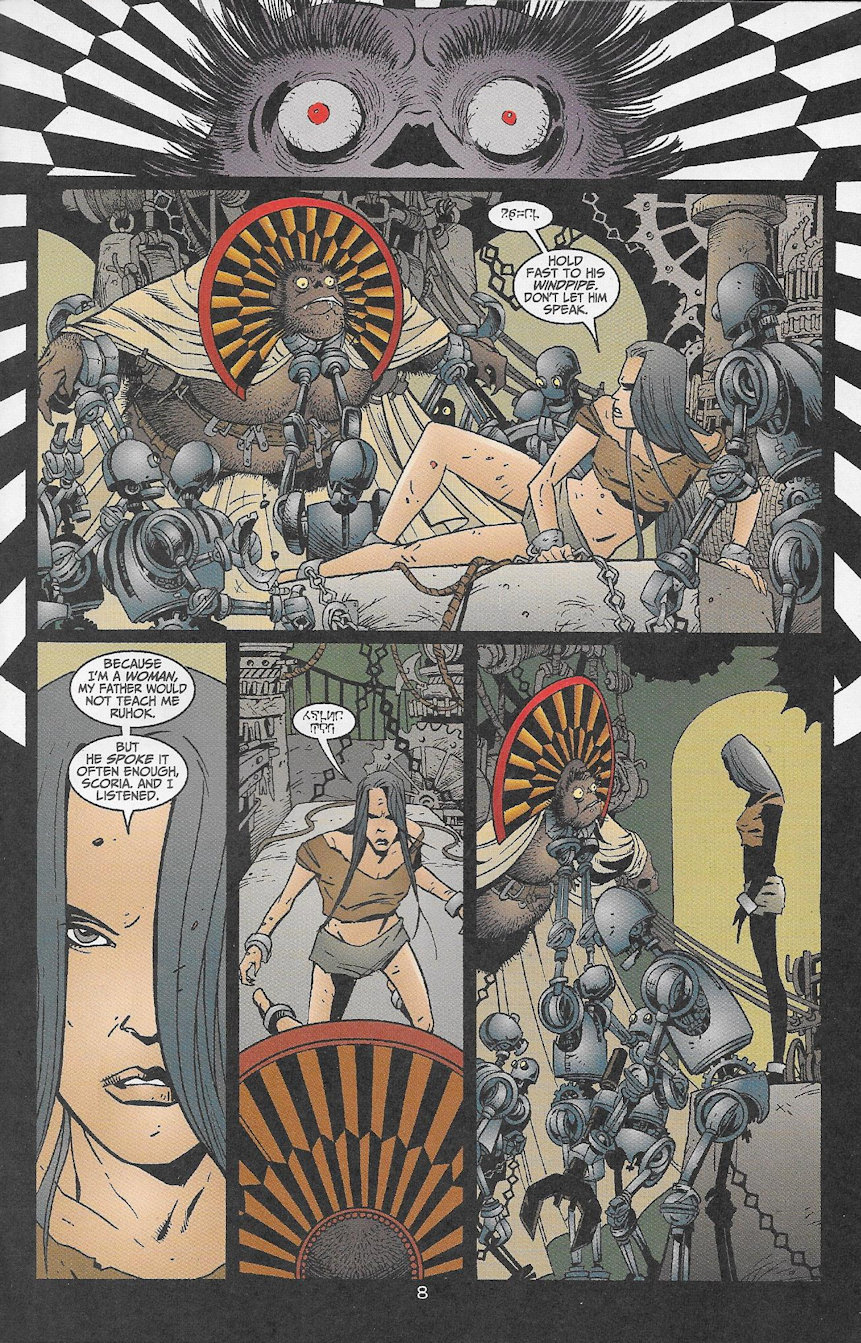 …and then has her mecha army burn his remains. In the vicious melee, Susano makes his escape, however. 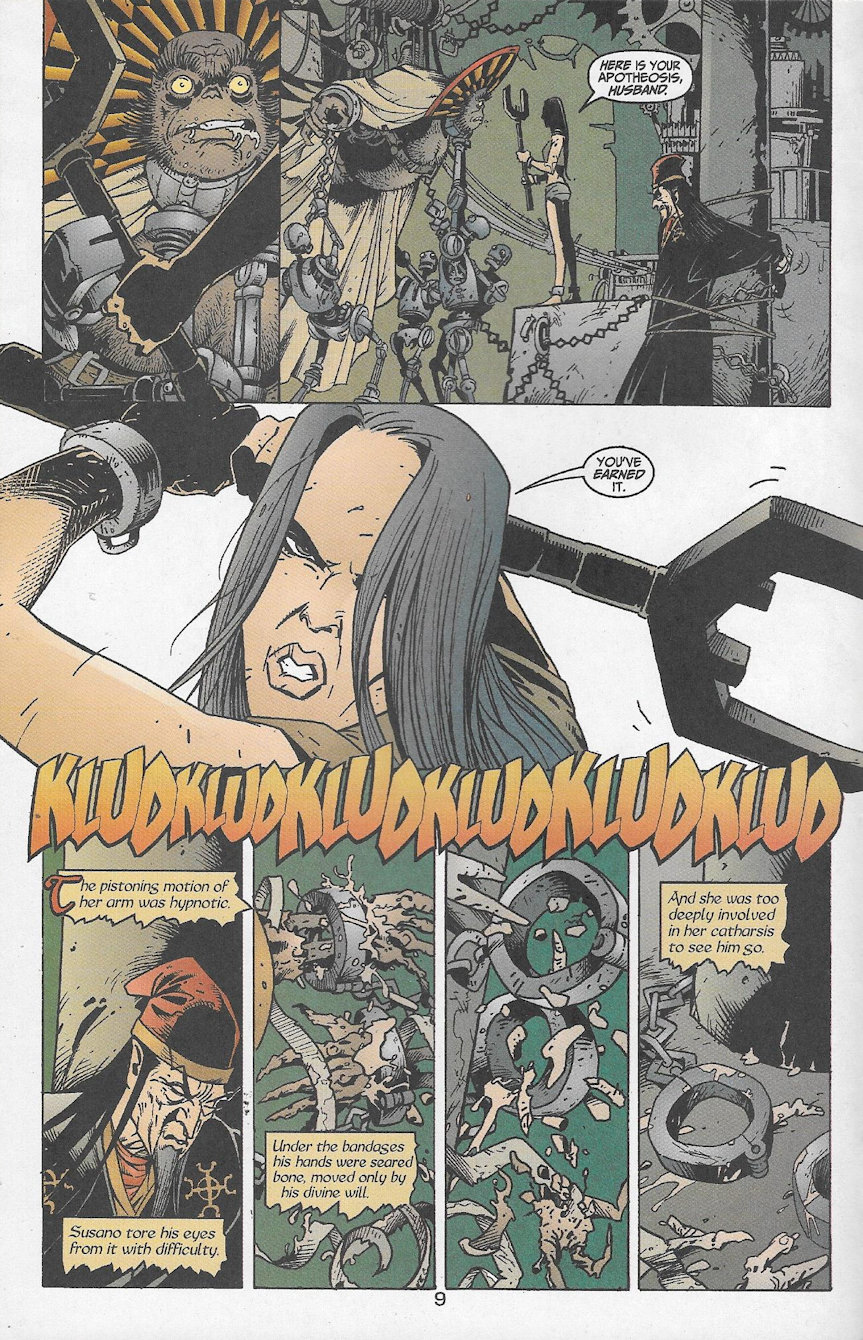 And at the same time Amendiel has Lucifer’s heart in his hand and decides the correct thing to do is to eat it. Possibly this is explained somewhere early on, but I missed that issue. Eating it seems to have been the wrong move, though. 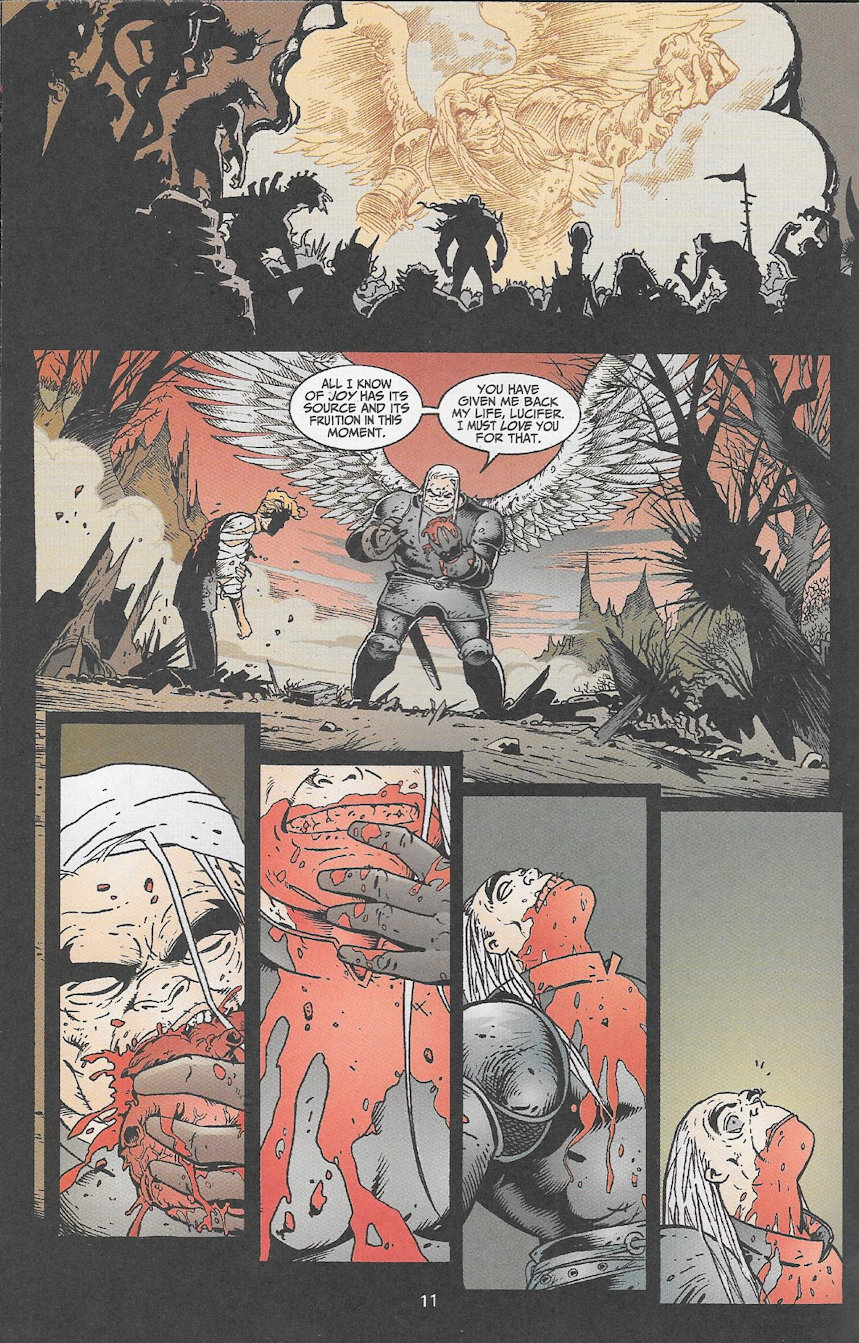 Appears the heart Amendiel pulls from Lucifer’s chest belonged to an assassin sent to kill Lucifer in an earlier issue. And it contained a toxi cherub that now paralyzes Amendiel. 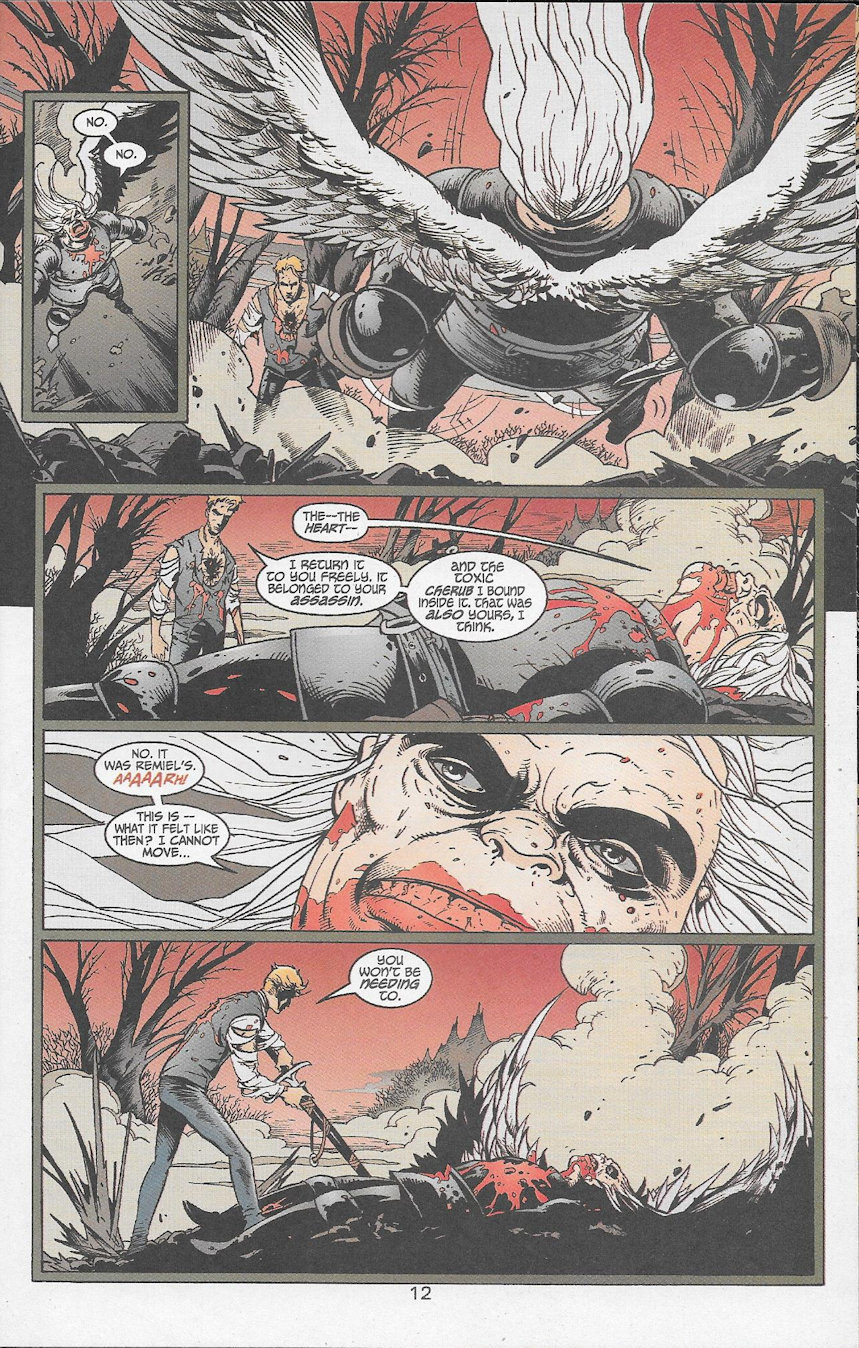 And with that, Lucifer gets to chow down on Amendiel’s heart… 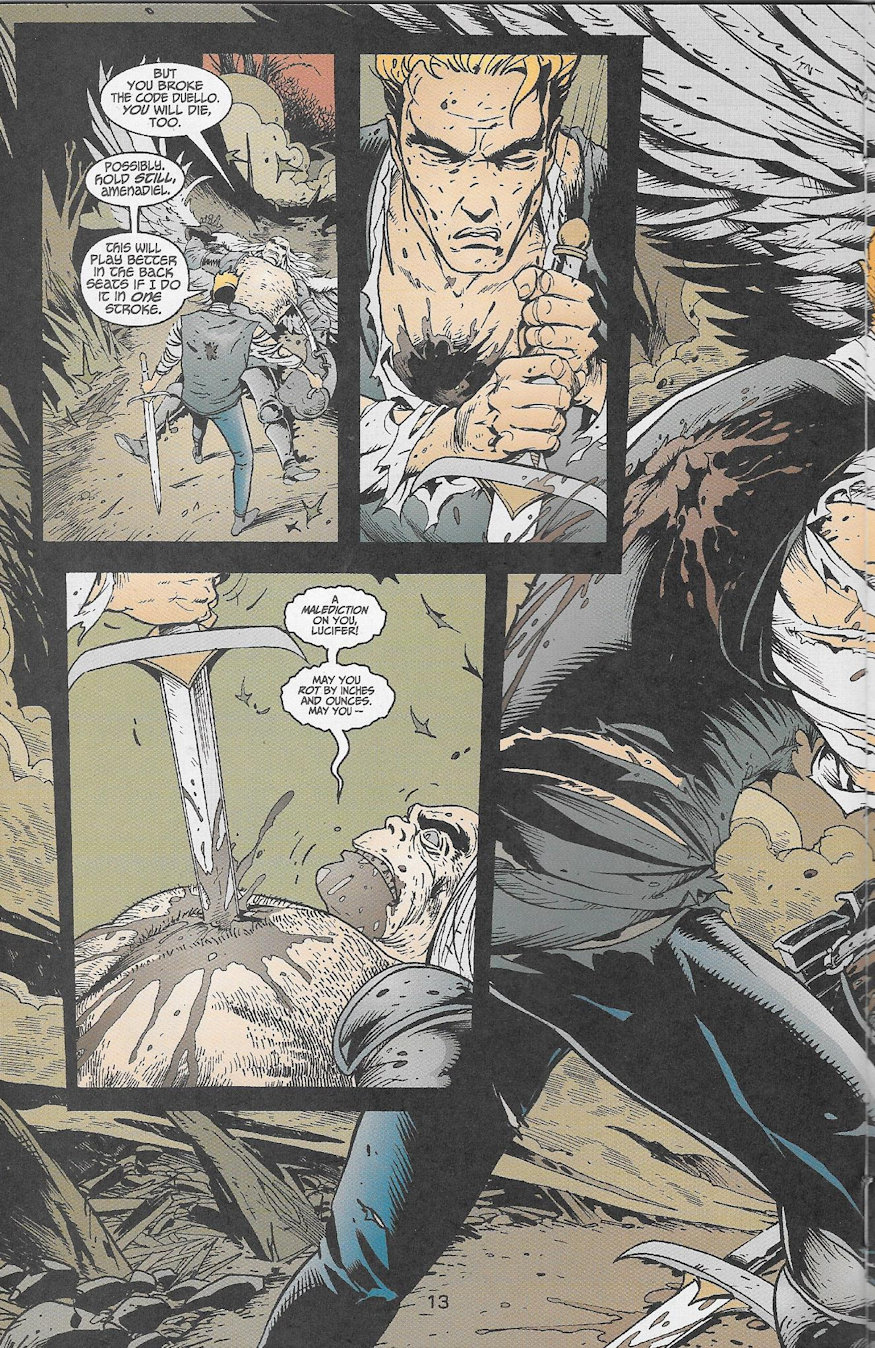 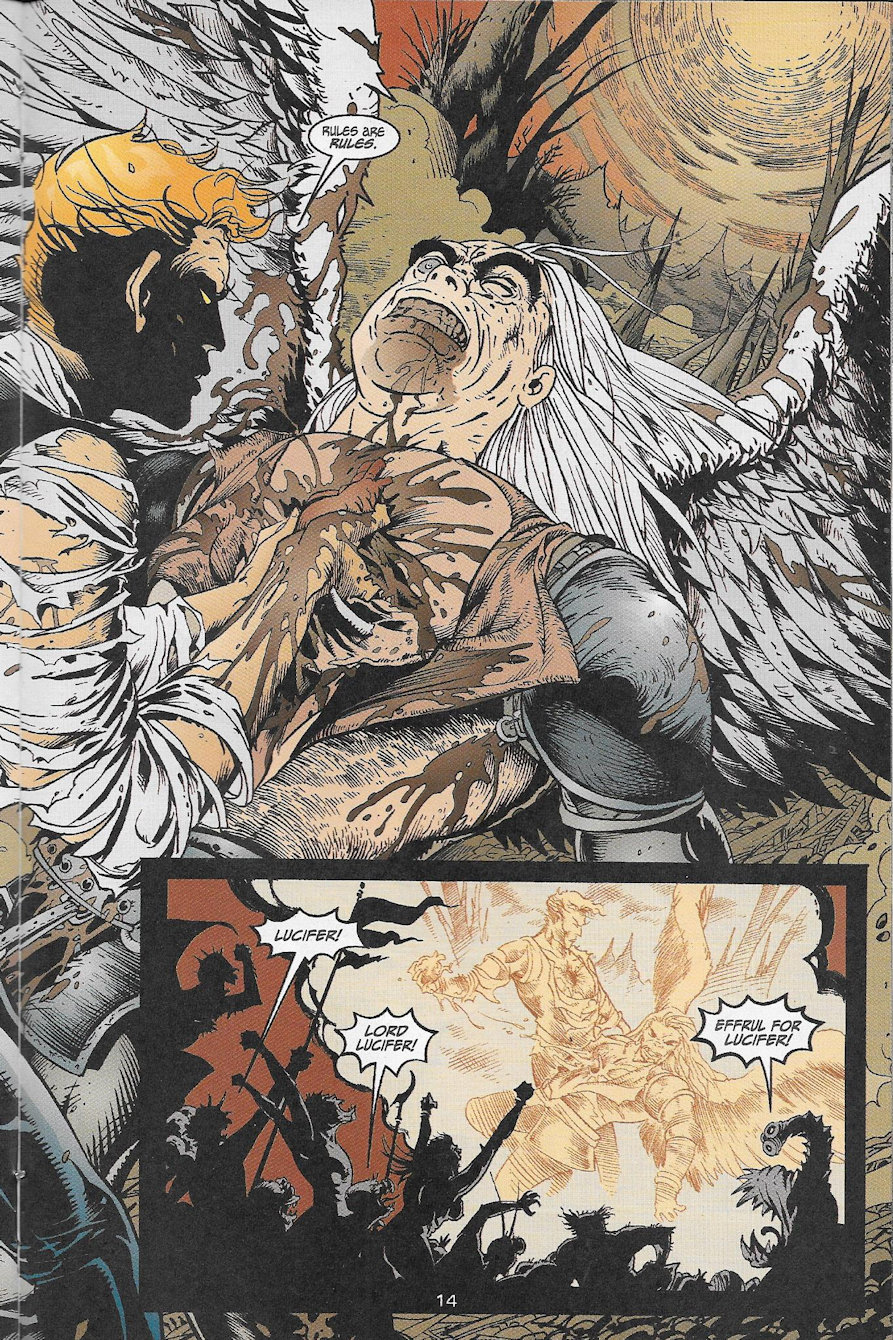 …but before he can be announced a the winner, an angel appears and locks down the dueling ground, demanding Lucifer be brought to him. 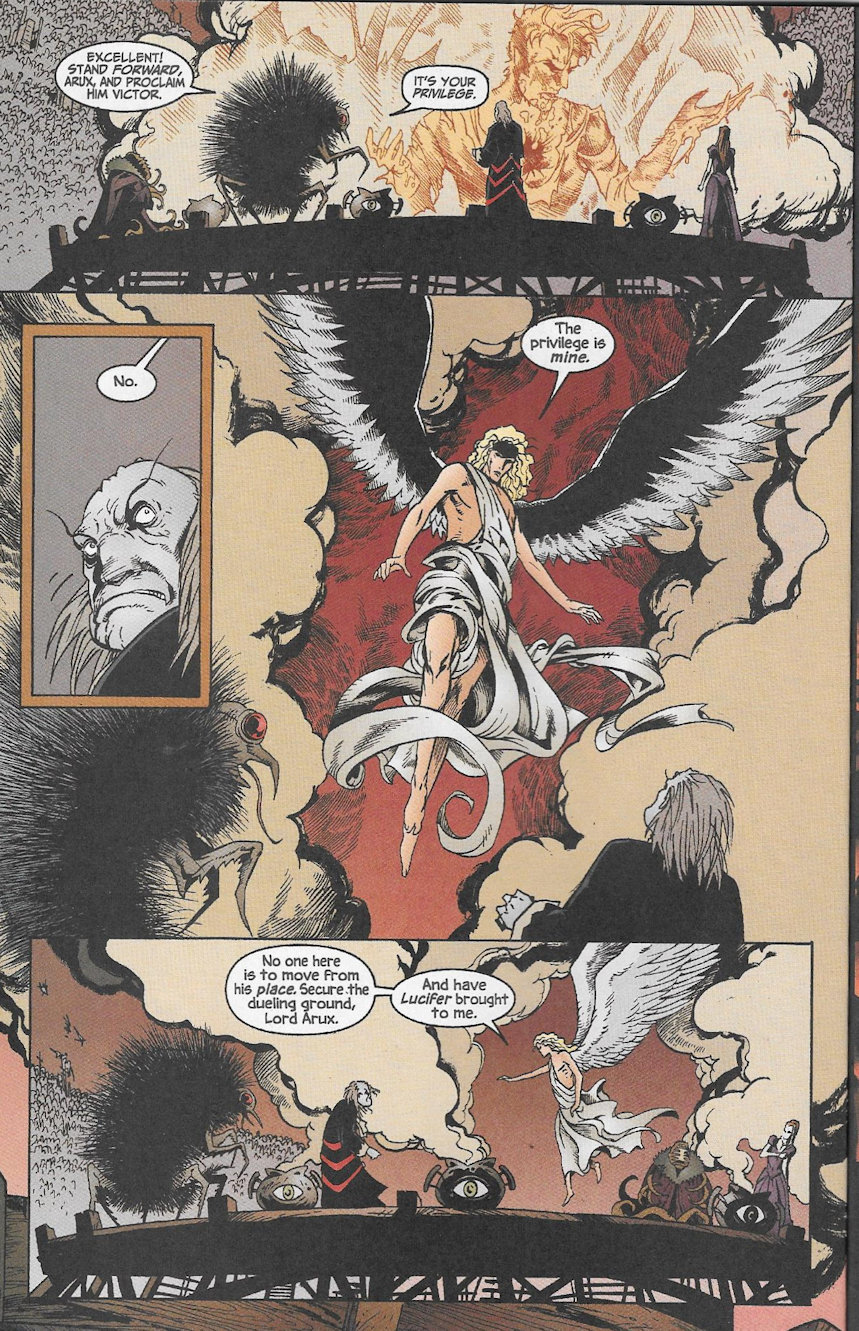 Flip back over to Mazikeen, who has found Susano at the top of the tower they were held in. Apparently Mazikeen is seeking some feather that are important to Lucifer for some reason not explained here. Susano means to deny her them until it is too late for Lucifer, who must be facing grave odds with the Angel or something… 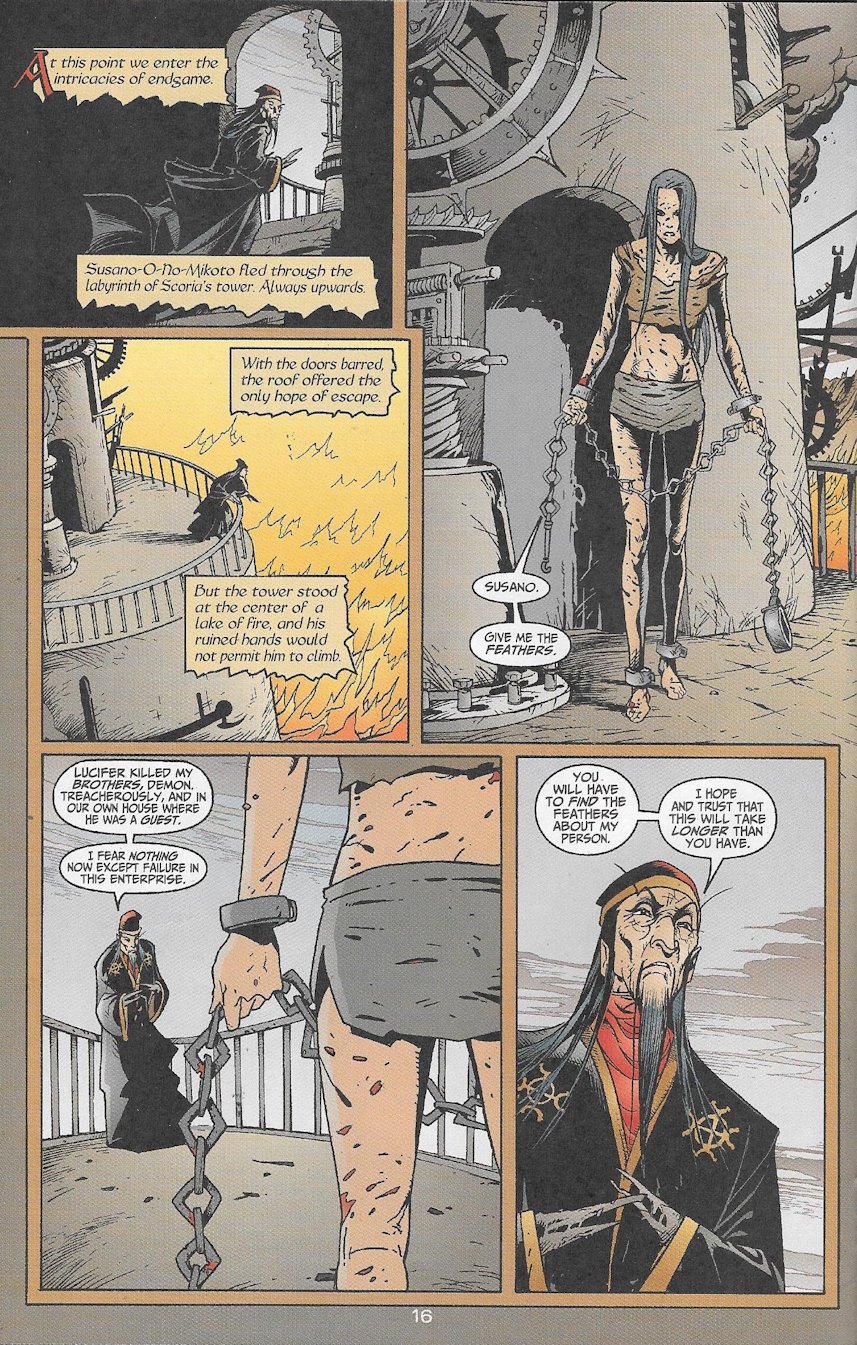 We turn back to them and the angel is invoking some rule that says Lucifer didn’t win because his heart wasn’t on the dueling ground. But Lucifer shows what was in the box that Amendiel was given to track him. 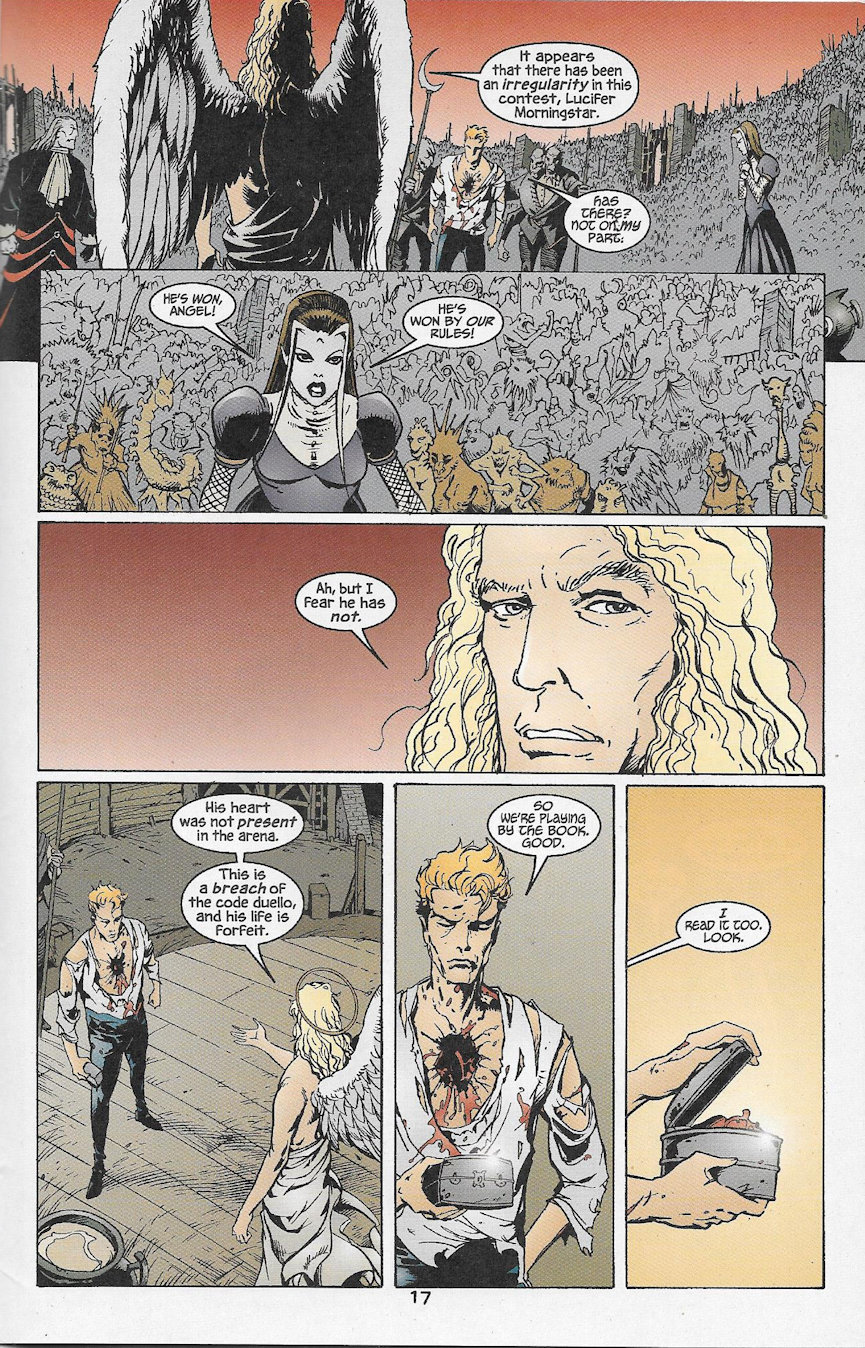 And that would be his heart. Amendiel had the means to win from the very beginning, he just failed to realize it. Not only that Amendiel wasn’t supposed to have the means to track Lucifer. (oh, and it appears Mazikeen now has Susano where she wants him.)

While angel and Lucifer argue, Mazikeen tosses Susano off the roof into a pit of lava, destroying the feathers she sought… 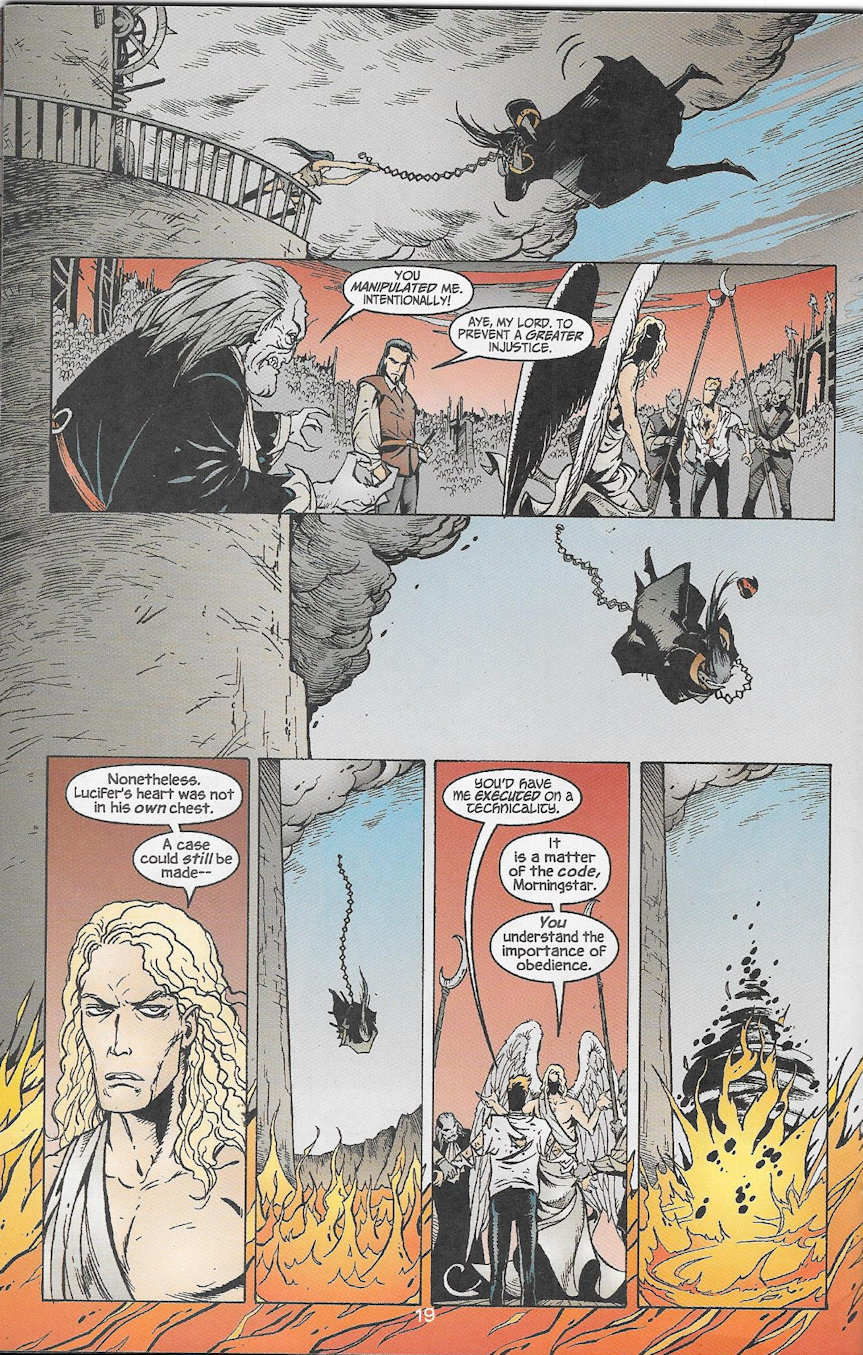 …which immediately restores Lucifer’s wings and I’m to suppose…no small amount of his power. 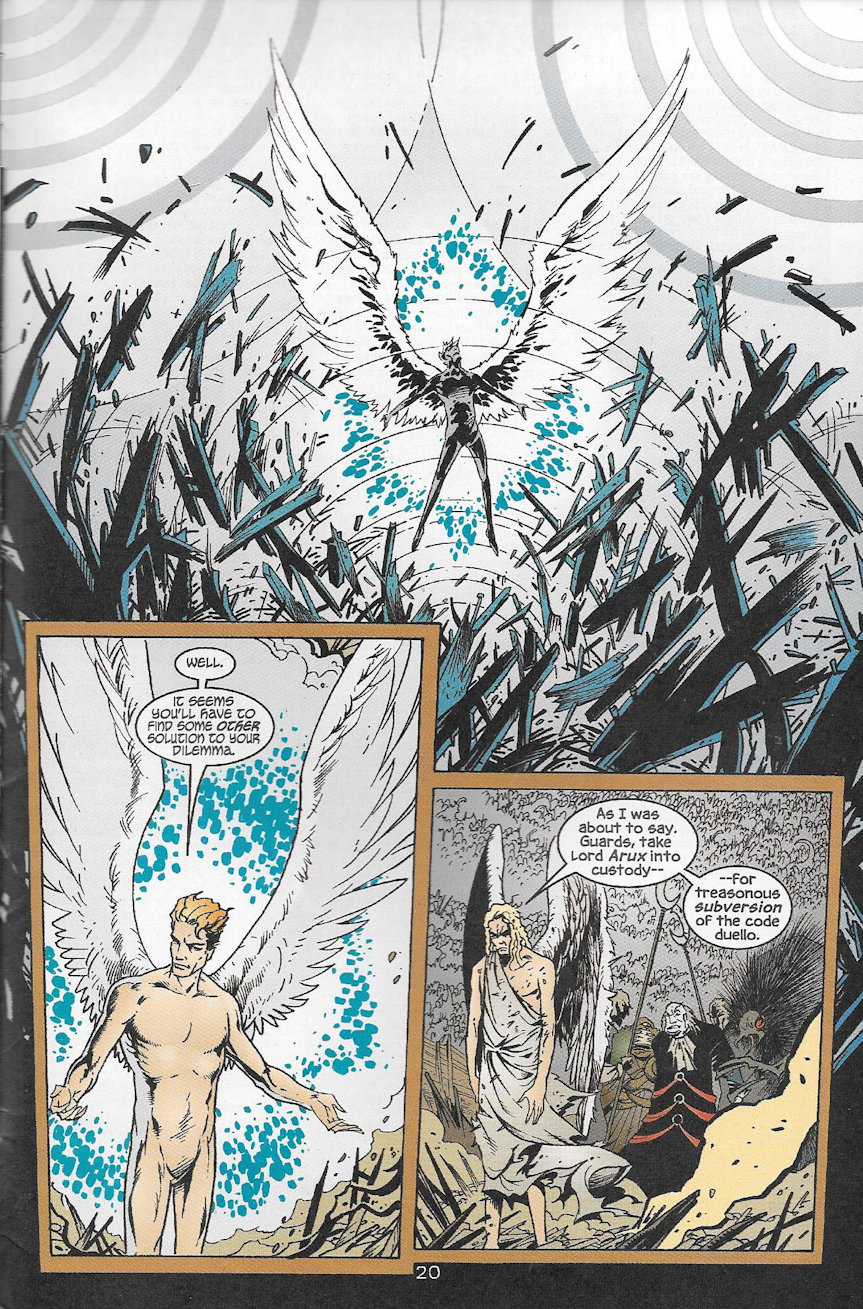 We end with an epilogue showing how various characters made out after the events in the arena unfolded and something about Lucifer and an angel. All of it goes over my head though. 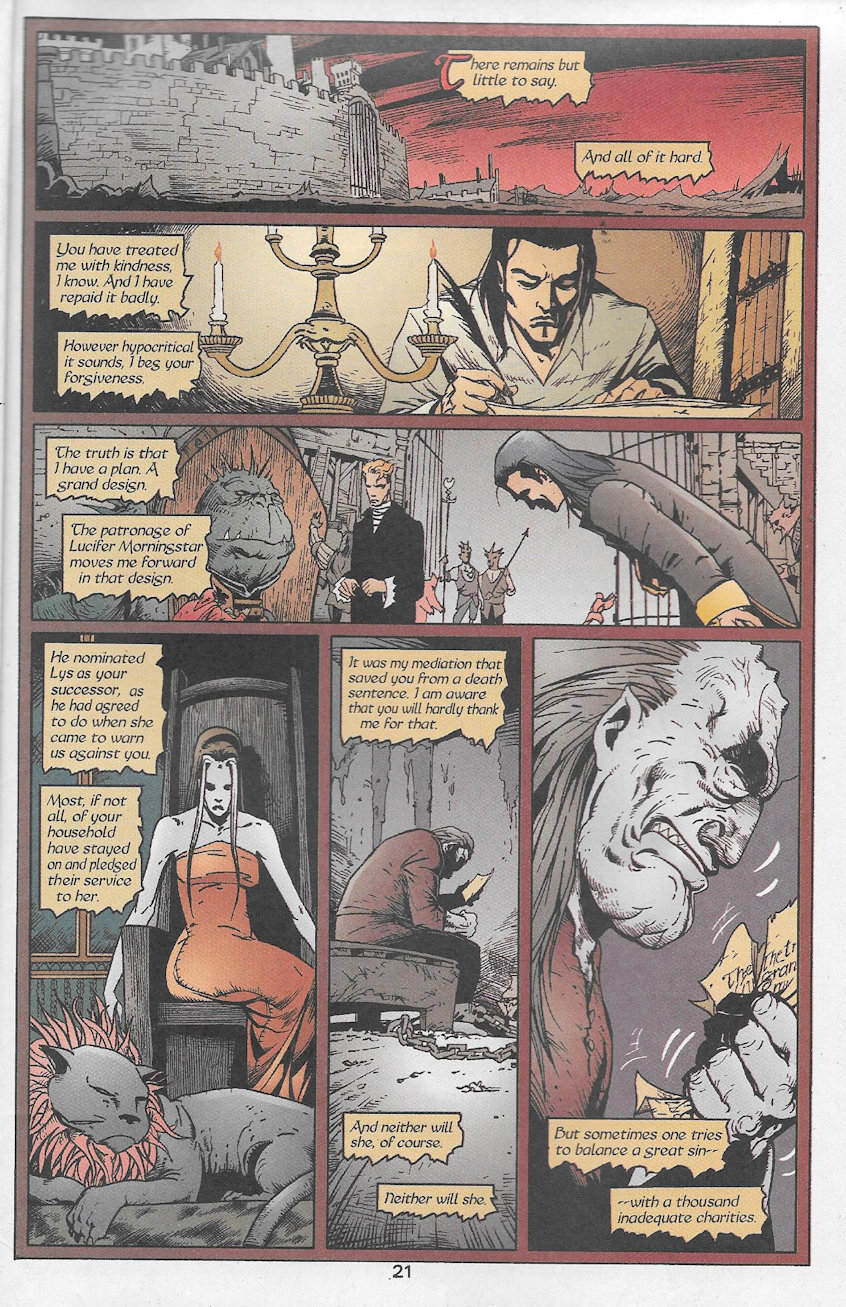 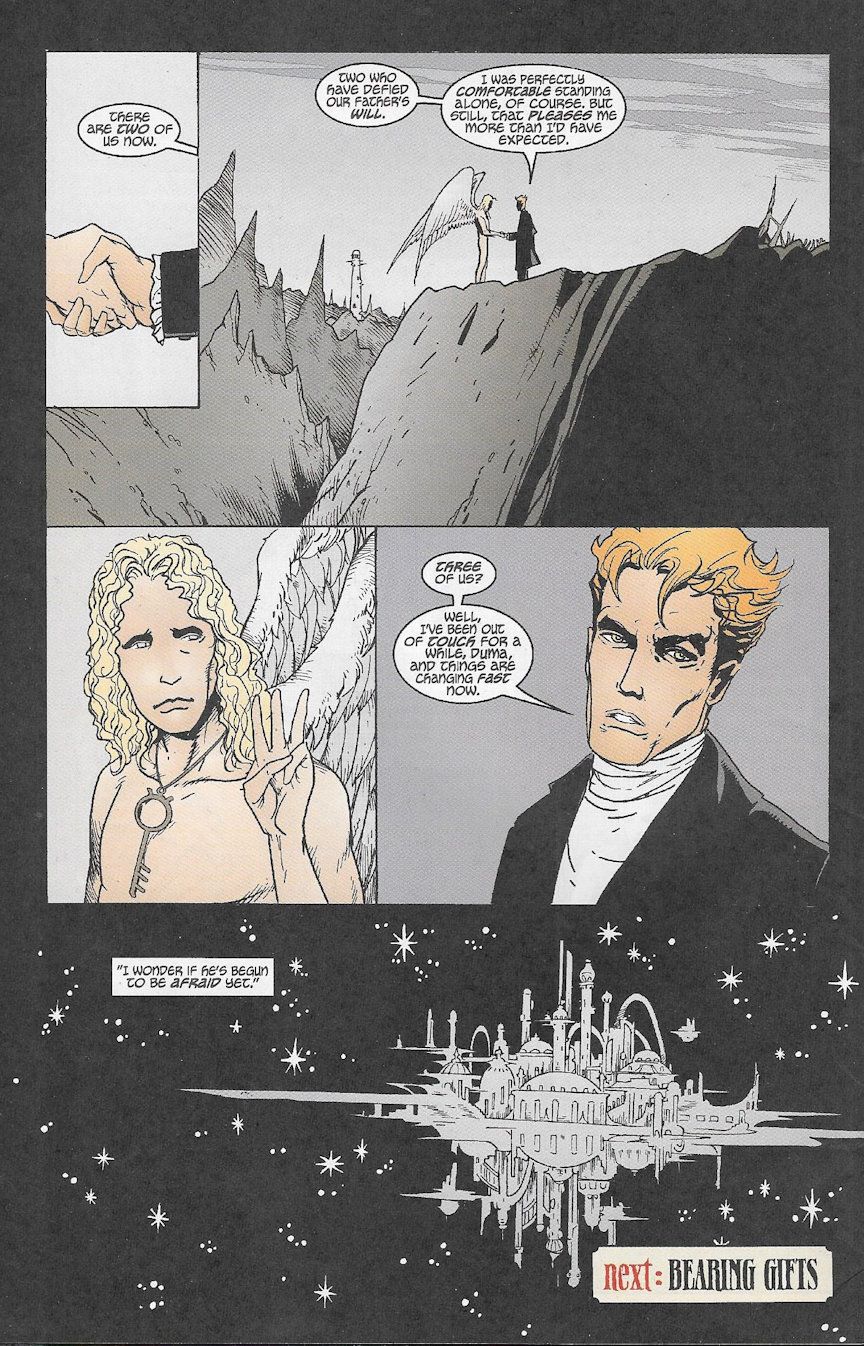 The Lucifer series intrigues me, but it will have to wait. It is far too involved for me to jump in with crapbox issues and get anywhere. Maybe it will come up for sale in trades at Half Price. Either that or a big sale on Humble’s Book Bundle. Till then, I might give the TV show a try, thought I doubt it comes close to this level of supernatural.

Posted by SonOfCthulhu at 8:35 AM