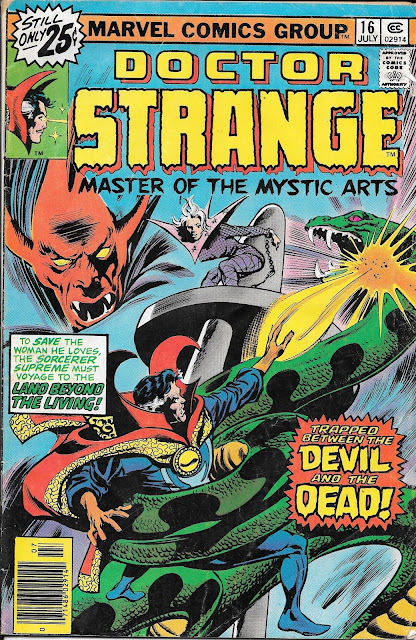 Strange battles Satan in some kind of bullshirt!

Steven Englehart is a toss-up for me.

There are stories of his that I read as a kid that I felt were the epitome of great comic writing. Works like Marvel Premiere #13, featuring the same character Englehart has his hooks in here, Dr. Strange. That book is one of my favorites and I’d much rather be reading that issue than this one. Maybe it’s the addition of Frank Brunner’s pencils accented by Neal Adams’ inks? Certainly Gene Colan and Tom Palmer are no slouches, but this issue doesn’t have the crispness of MP 13. It looks muddy and Palmer’s colors don’t do it any favors.

But I think it’s more than that. I think it is the story. I believe this is a muddy mess, where MP 13 was a wonderful Escher puzzle. The two don’t compare. Not certain how artists can make THAT much of a difference unless they are substantially changing the story. But there it is.

Englehart fails to pull this one off and I’m left confused and a bit mystified…and not in the “it was a great, mystifying Dr. Strange story” kind of way.

Let’s wander through Hell with the good Doc and Clea. Without the prior issue, I have no idea how they got here, but they are facing one of the baddest bad guys of them all. SATAN! *cue lightning* 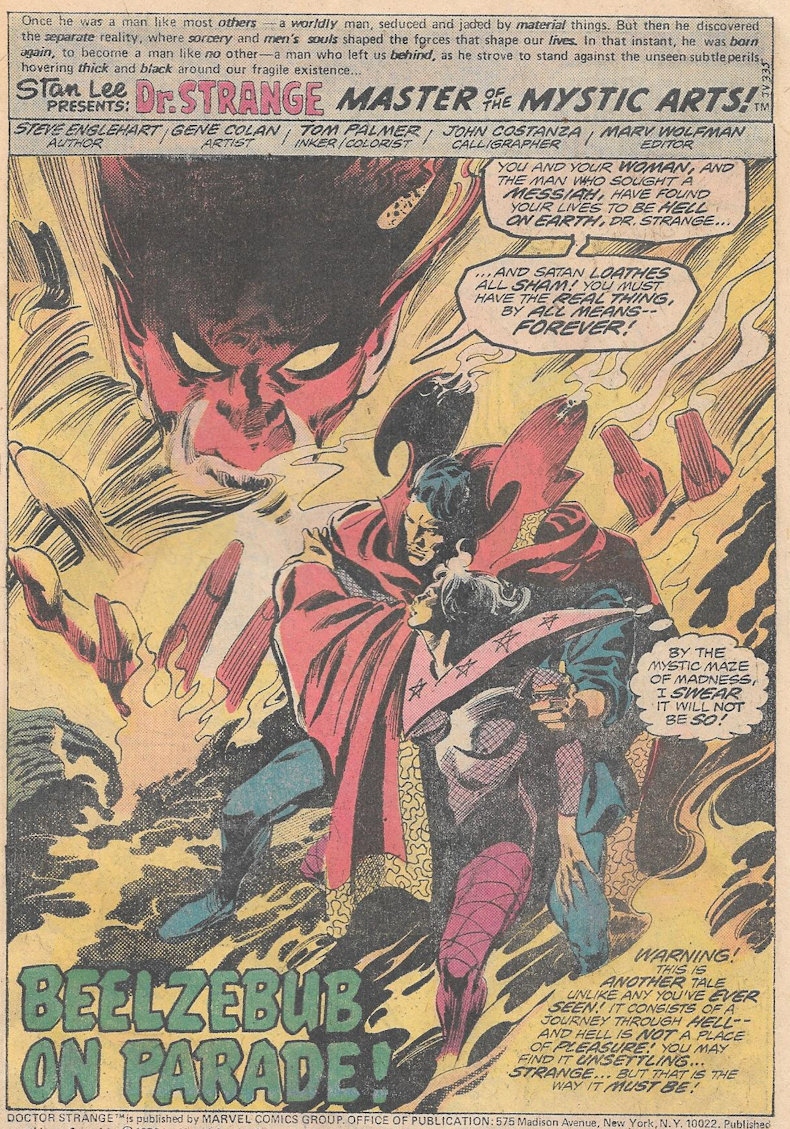 Yup! I know where the rest of my Marvel friends are going. Satan doesn’t exist in the Marvel 616 Universe, right? Don’t you mean Mephisto?

Nope. The good Doc has faced off against Marvel’s stand-in Devil too many times, I suppose, and Englehart had the ACTUAL Devil show up to…um….bedevil the good Doctor. Yeah, I don’t get it either.

Also things haven’t been going so good for Stephen Strange. Appears he just lived through the death of the Earth and had fought Eternity for its recreation. Satan brings that point up to him. 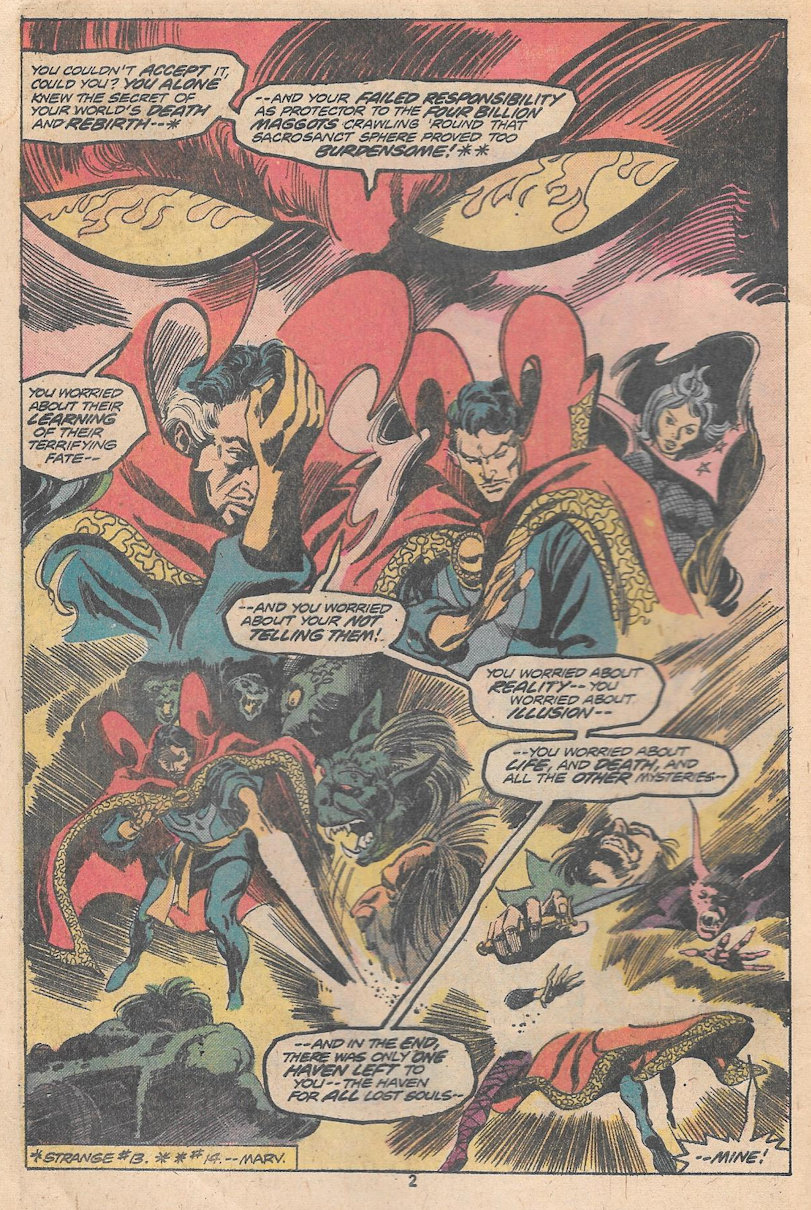 After watching the Earth fall apart and then come back together, the sorcerer had to battle Dracula and that went badly. Just how badly? See for yourself: 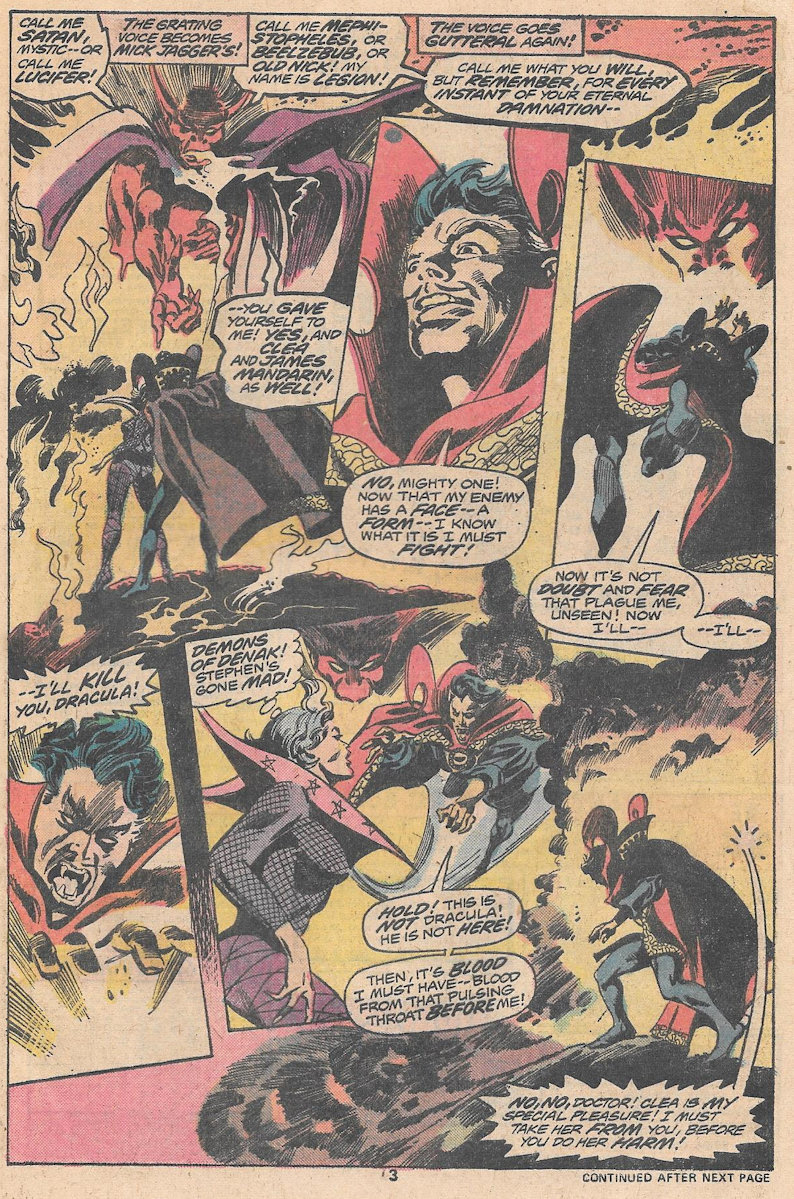 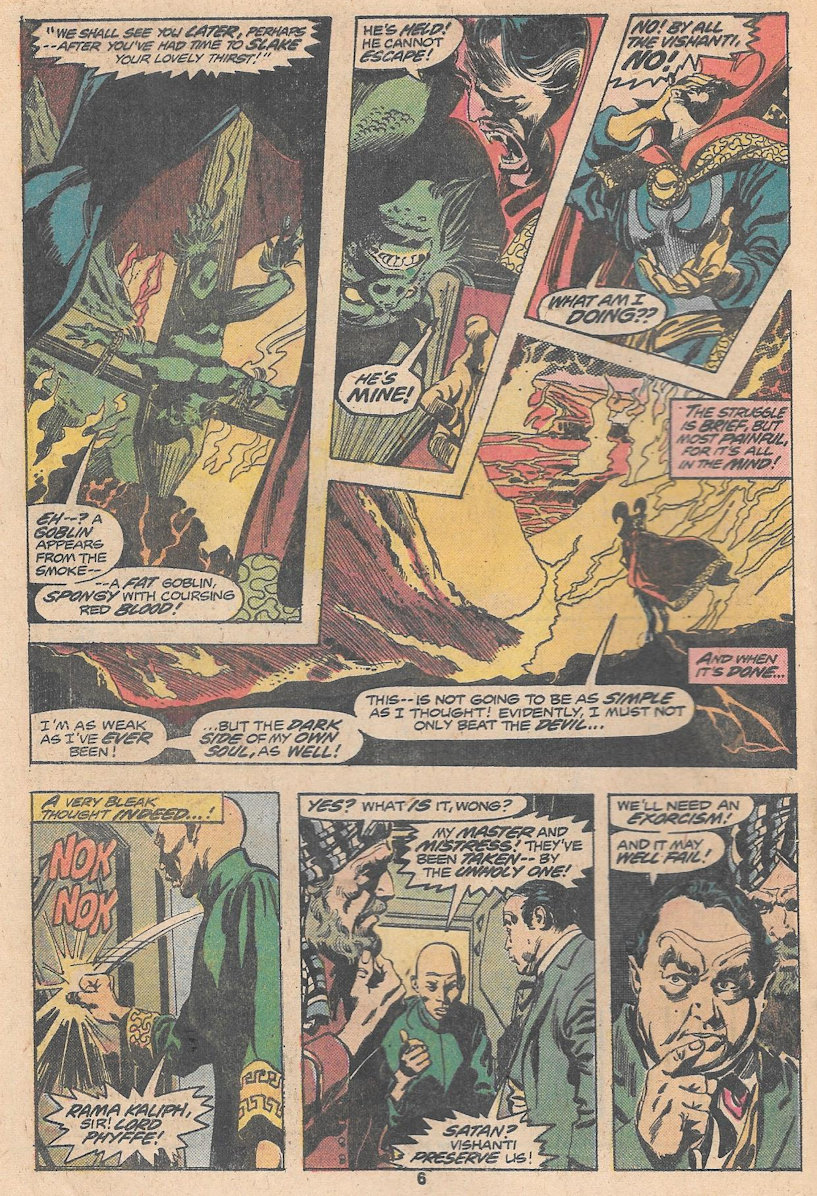 Yup, Doc got him a slight case of vampirism. And Satan isn’t below using it against him. I’m not even sure how this fits in with anything in the ongoing because I never see Doc get cured of it. It just mysteriously vanishes on the next page. Meanwhile Wong, along with extras Rama Kaliph and Lord Phyffe, work to exercise…er…exorcise the Satan out of Doc Strange.

We will check back on their progress in a bit. Stephen has to deal with saving “The Spirit of the Earth” from drowning in lava, which ends up being a devilish trick. 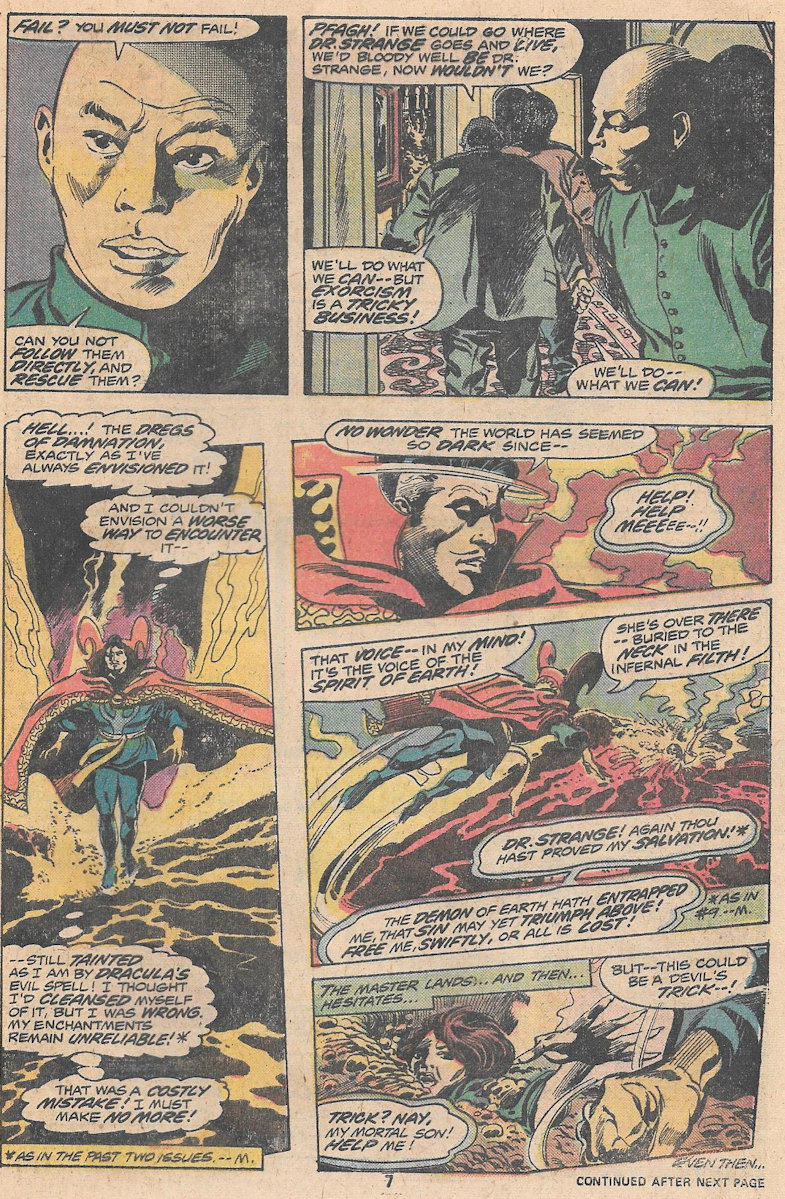 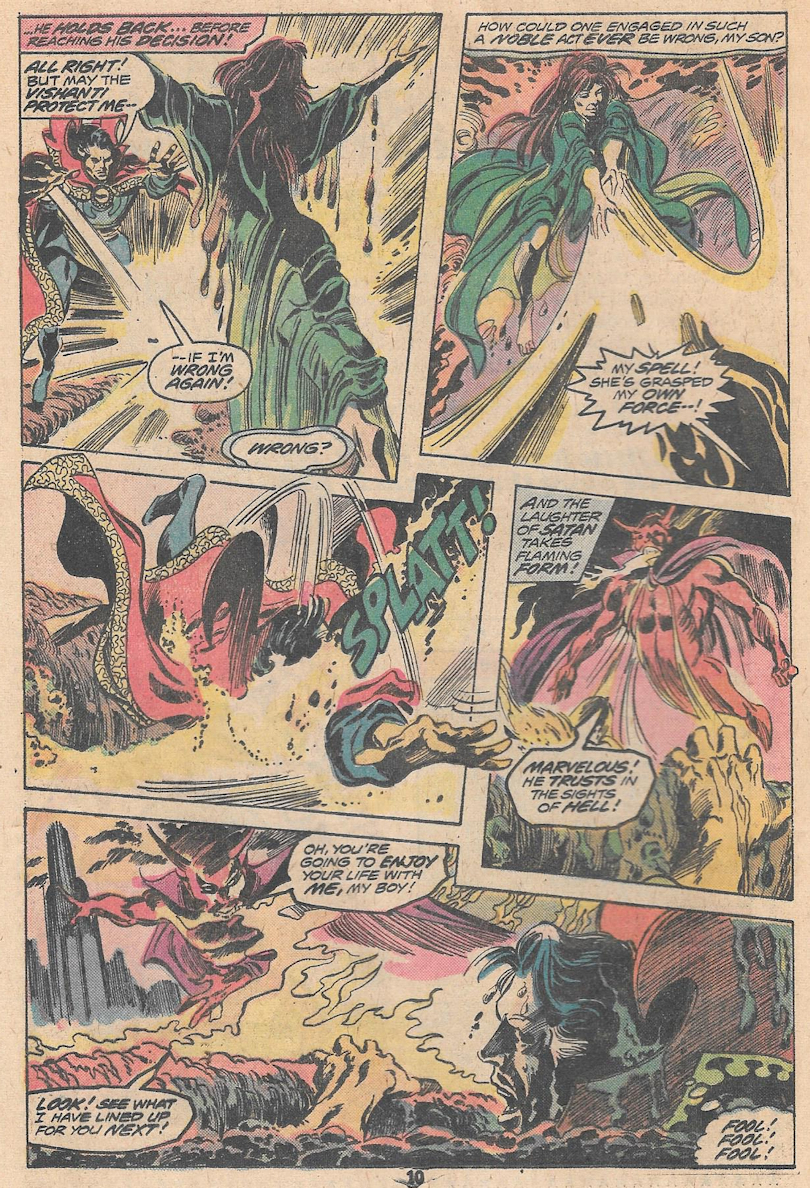 And after falling face-first into lava, the Sorcerer Supreme is next tasked to reach Clea, who is chained to the top of a high pillar. Note too that Satan keeps changing into really hammy dumb voices, like Mick Jagger and Mae West. Never thought the devil would show up as some weird form of Rich Little. 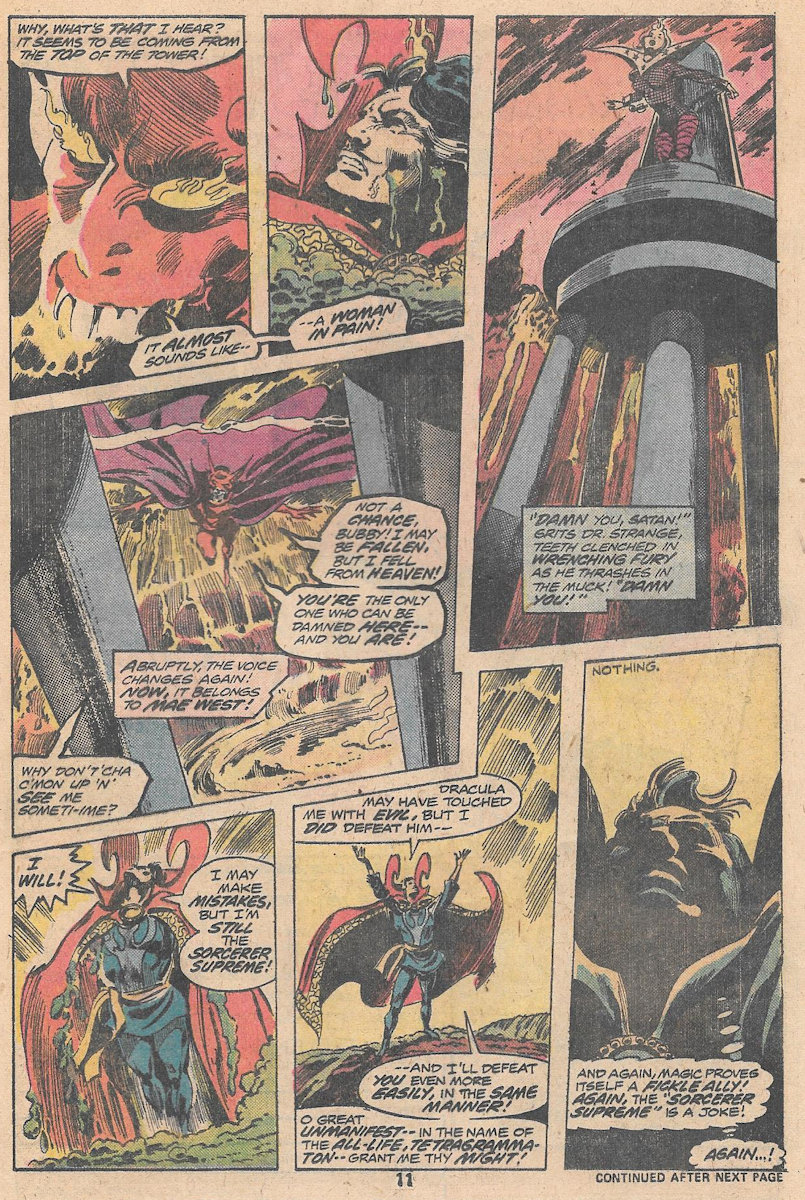 Oh! Back to the comic, which finally gives us something that might end in a payoff: Baron Mordo shows up. 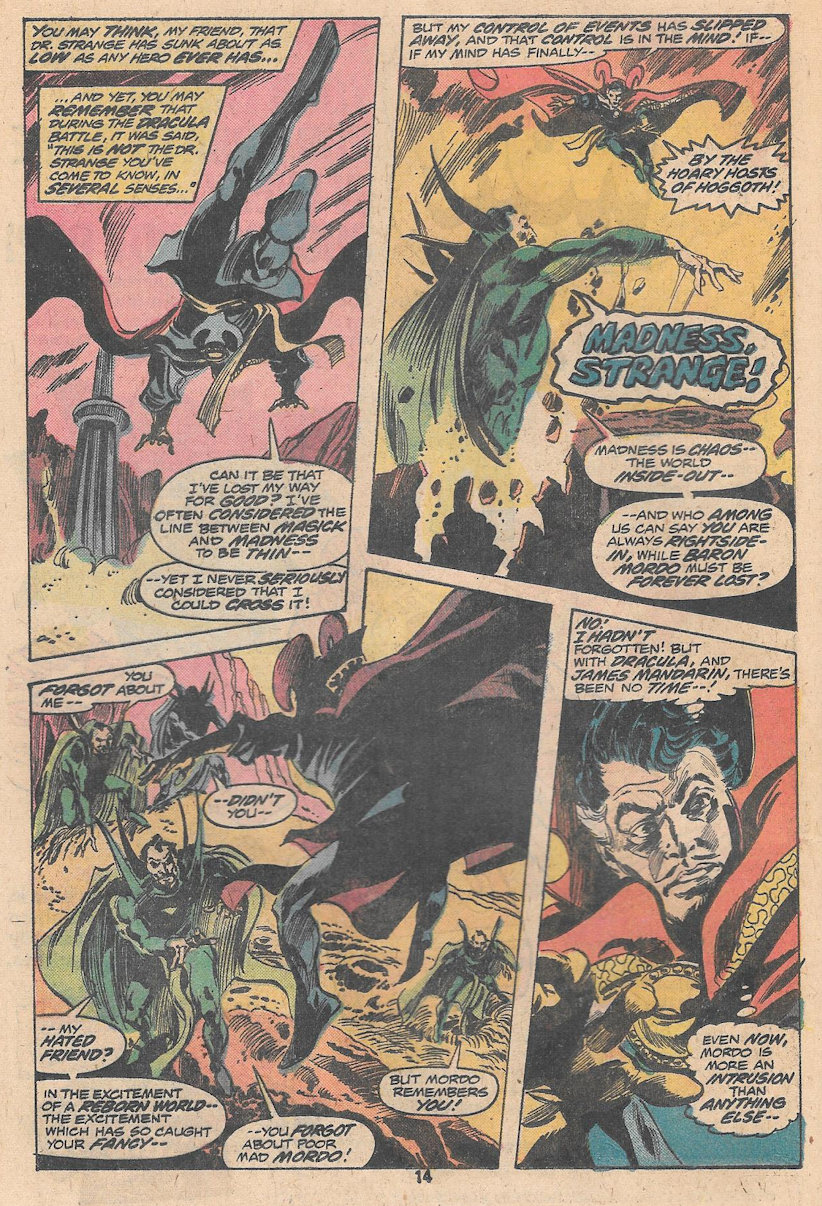 Make that LOTS of Baron Mordos show up. Where the hell is this going. Oh, riiiiiight. Hell. 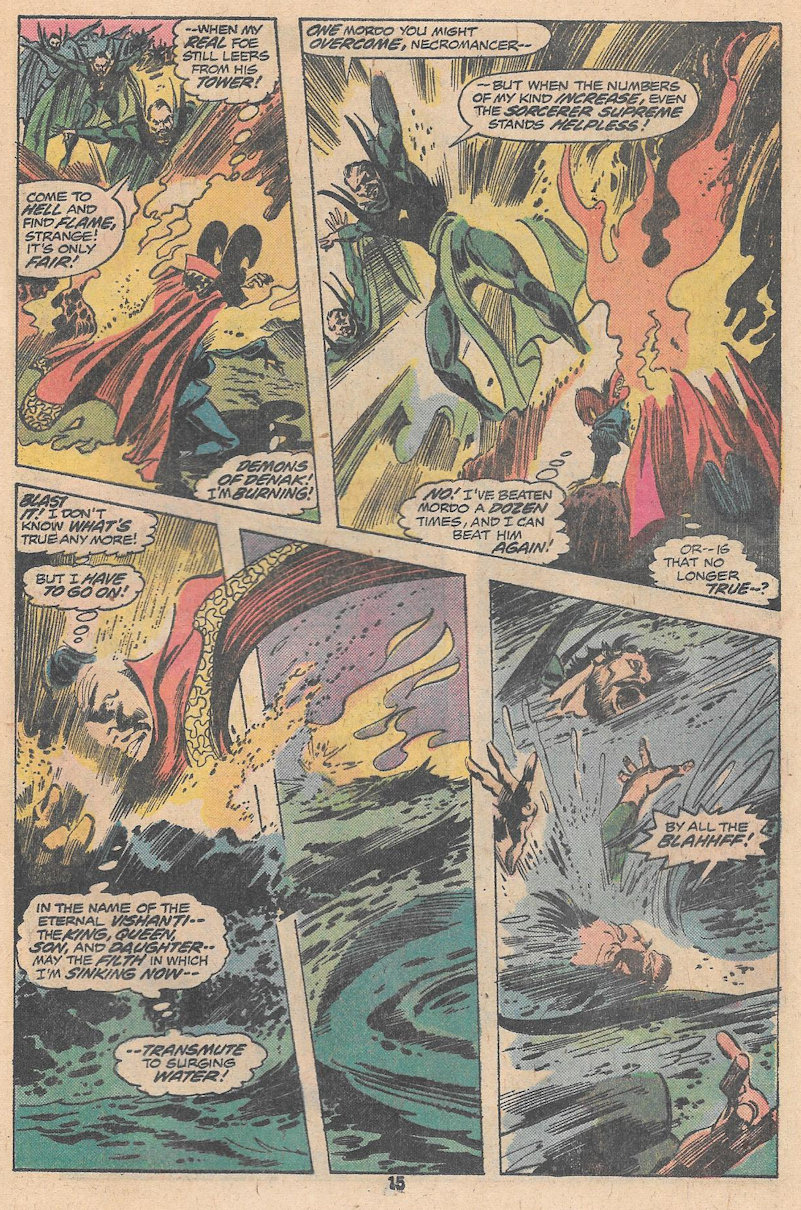 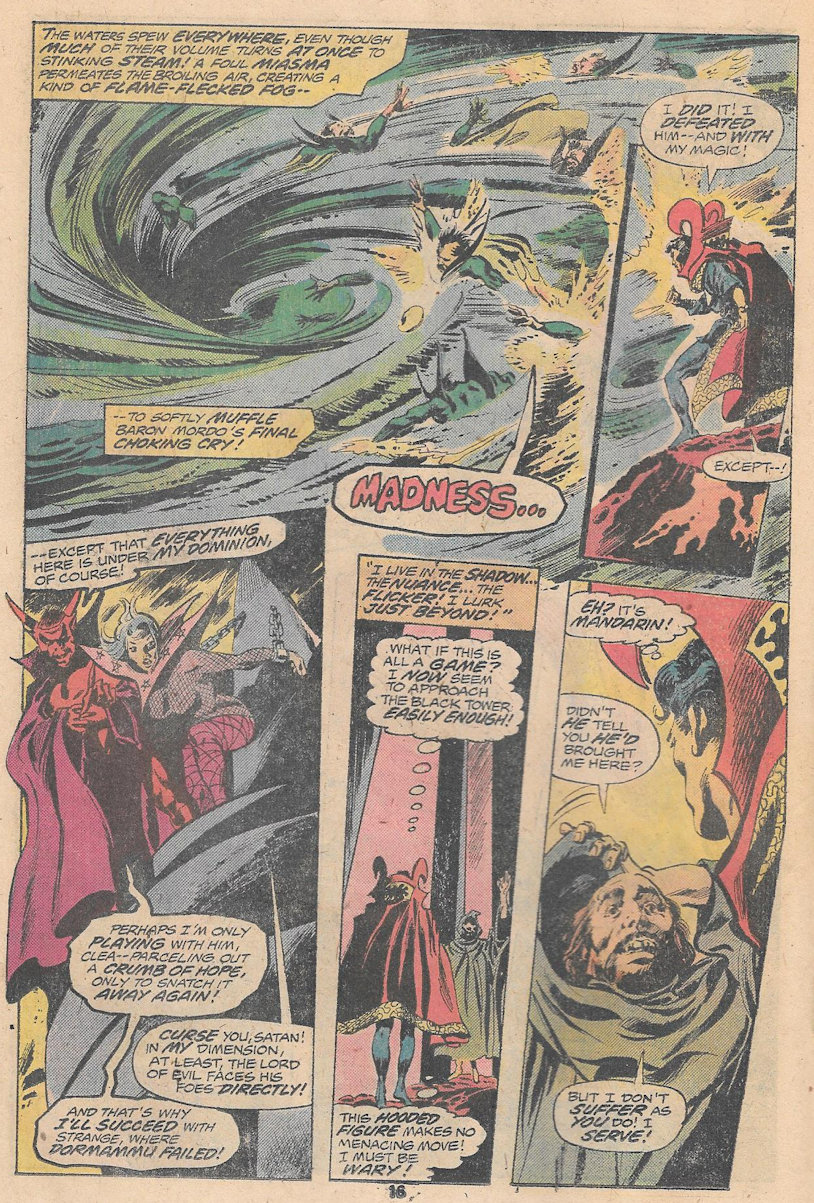 Or down the toilet. The visual metaphor is not lost on me. Anyways, Strange reaches the tower… 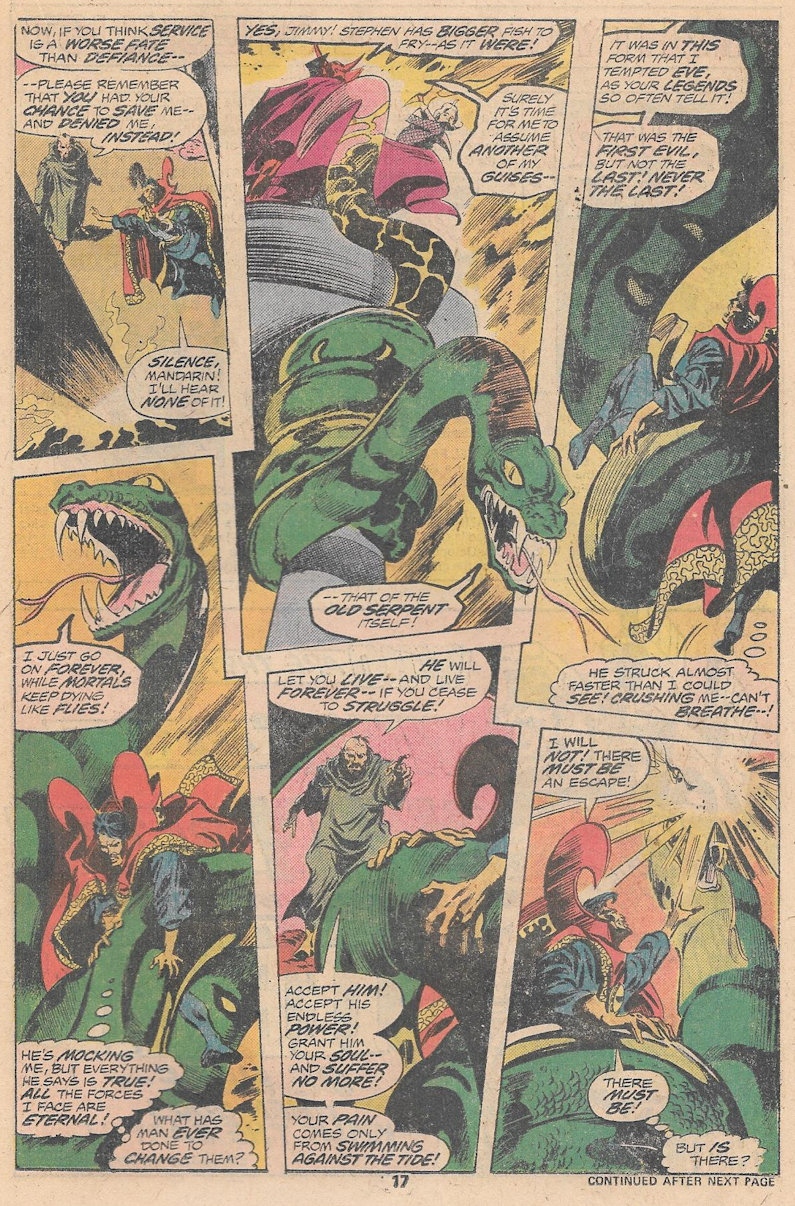 …only to have a giant Satan snake try to kill him… 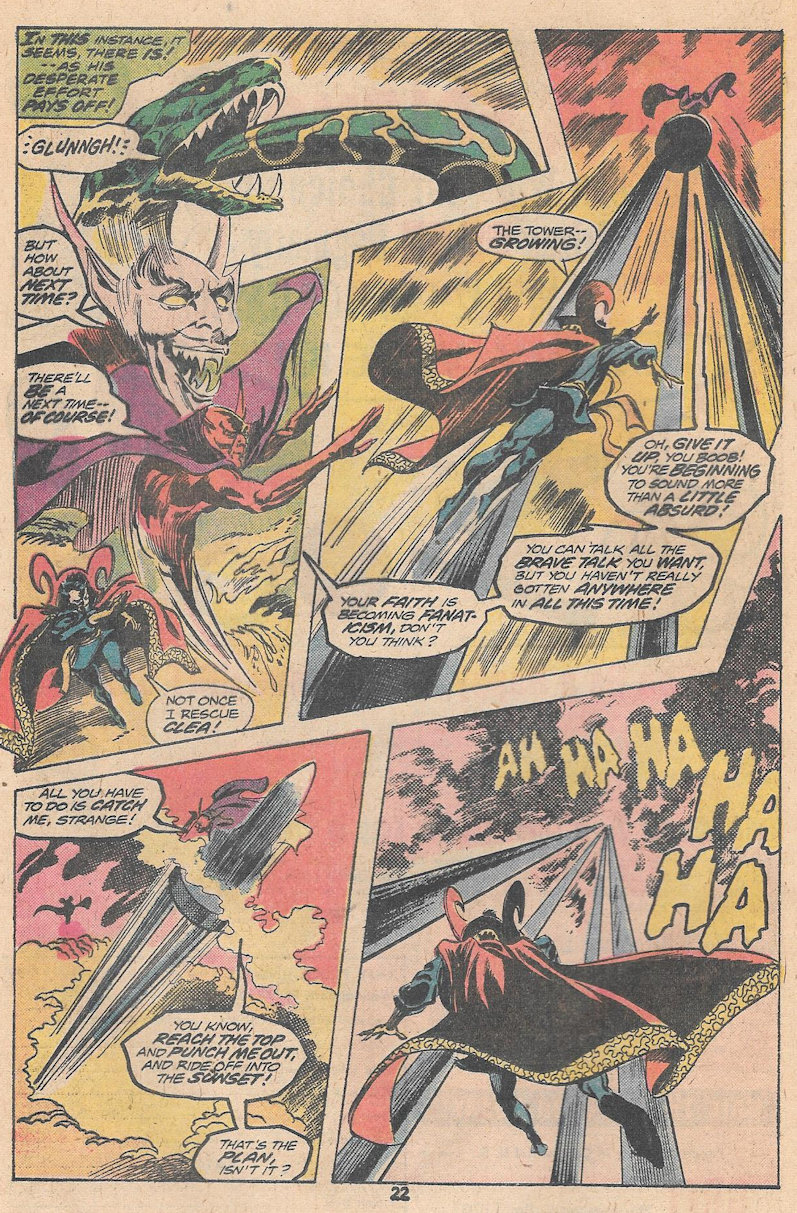 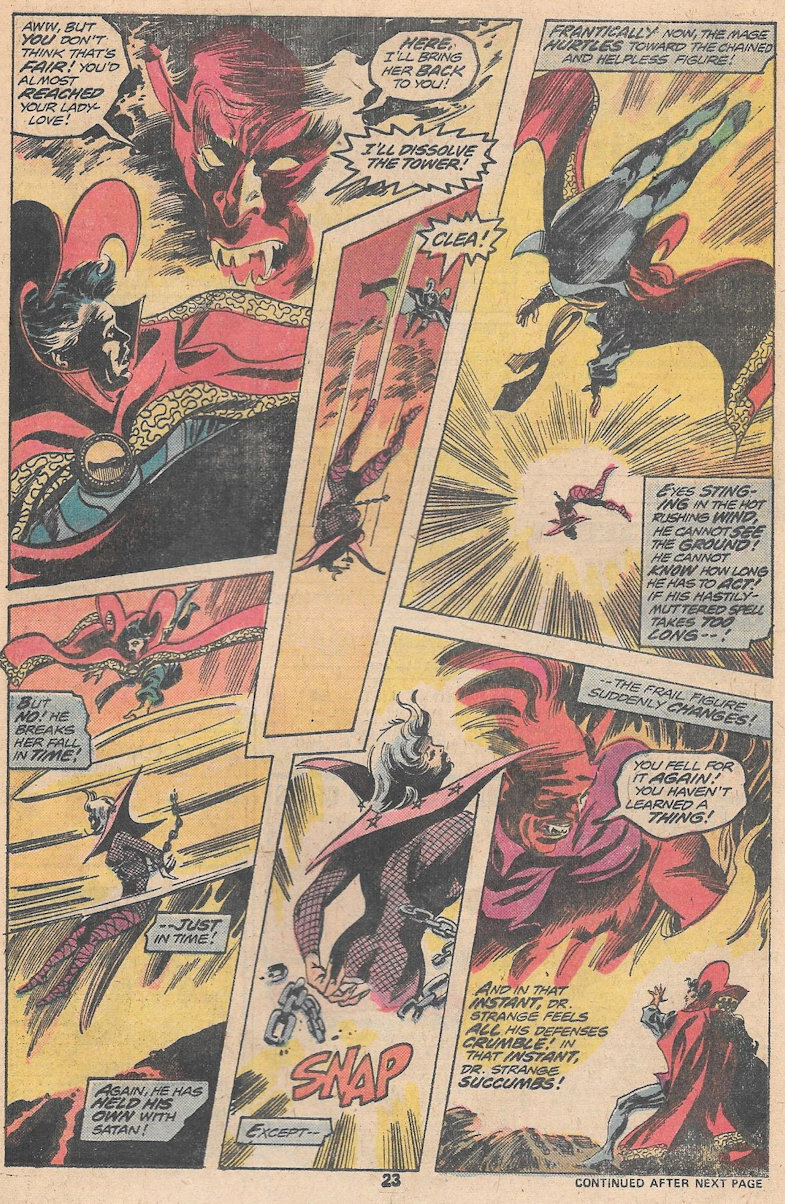 …and then make it vanish. This causes Strange to have to rush to save Clea…. 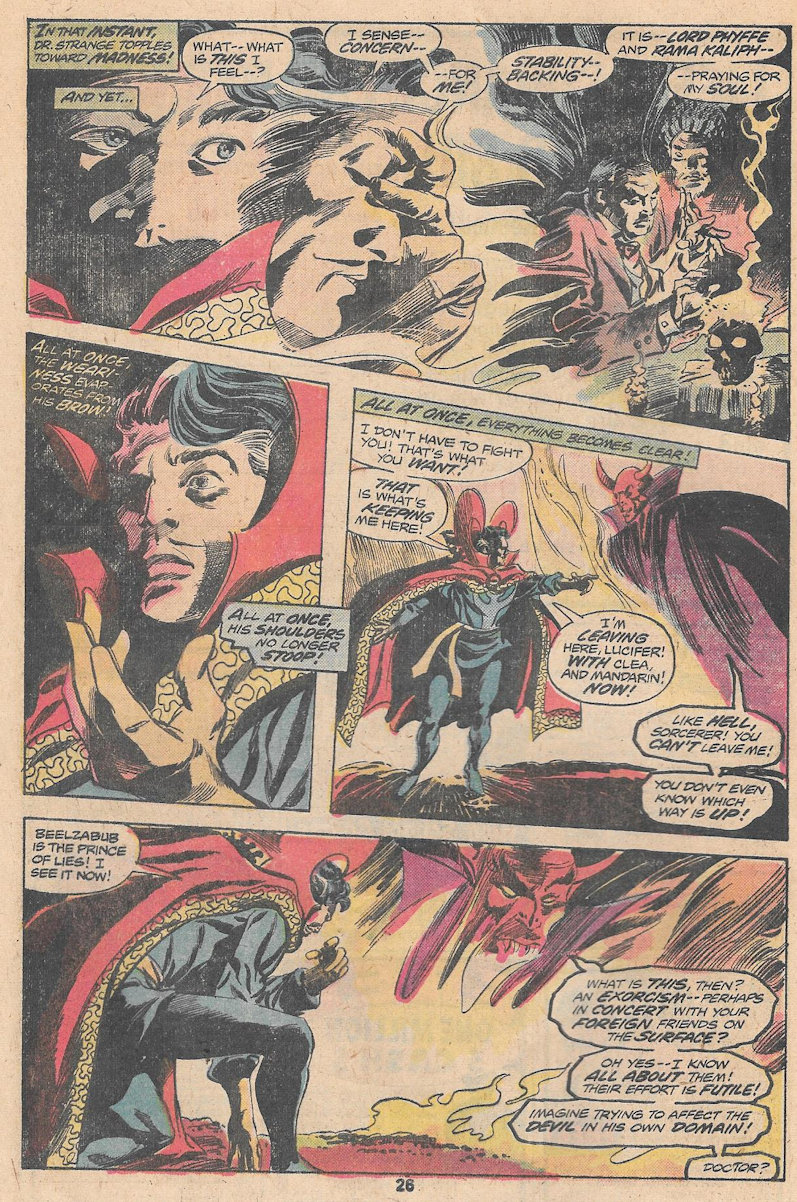 …and it just about then that his friends exorcism reaches him. He suddenly realizes all of Satan’s “tricks” are just that. A form of mental illusion. 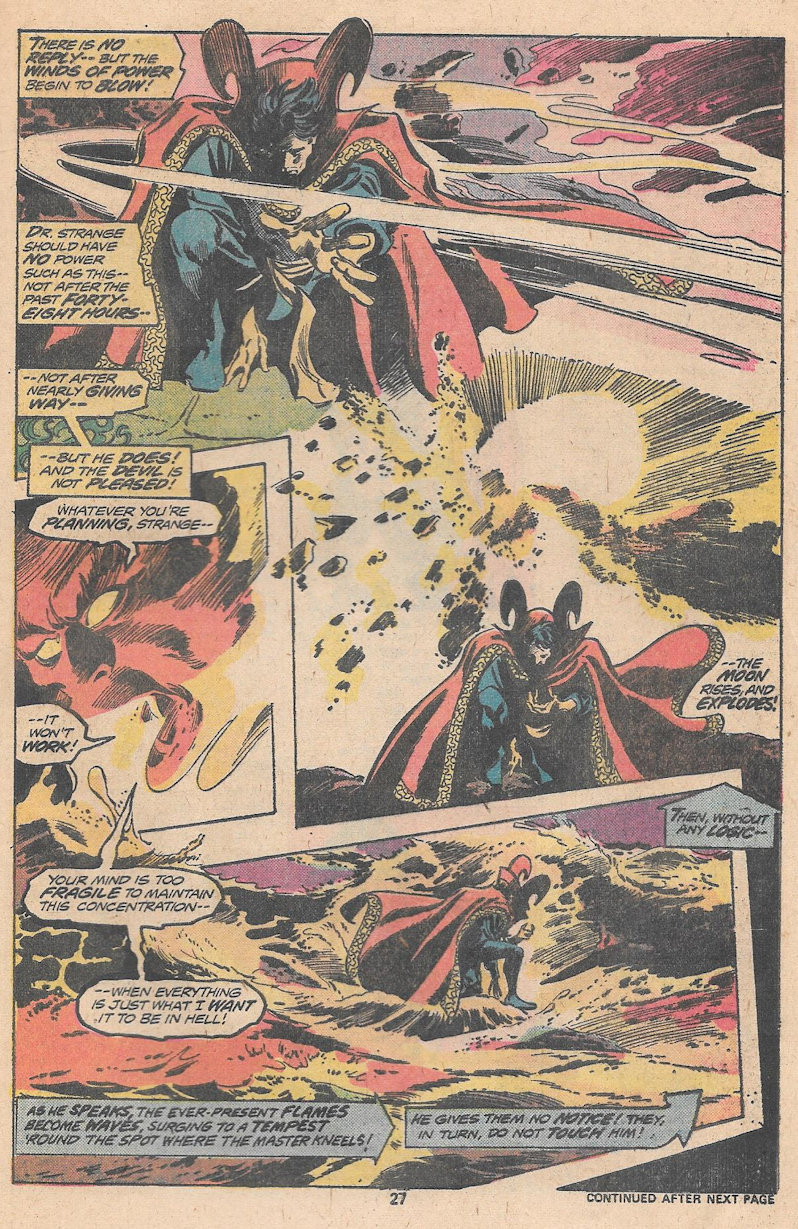 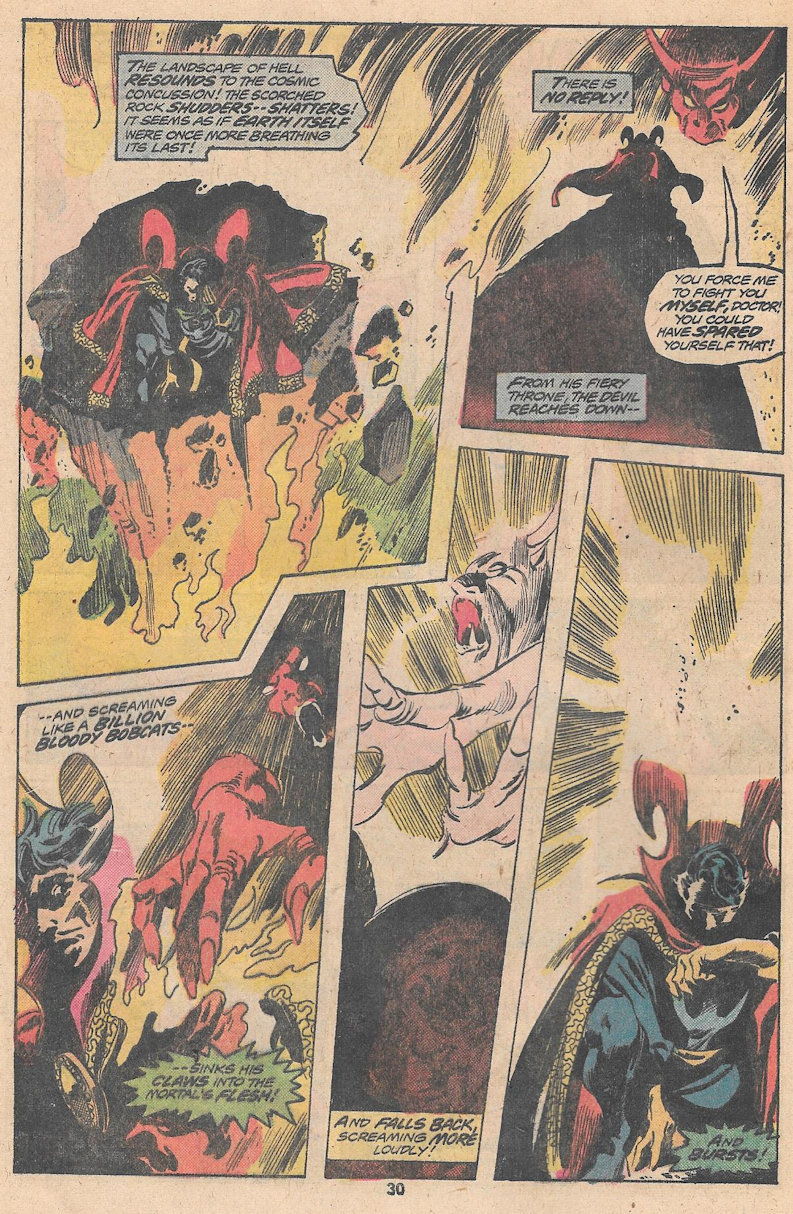 Doc Strange stops believing and even Satan falls back into the abyss. 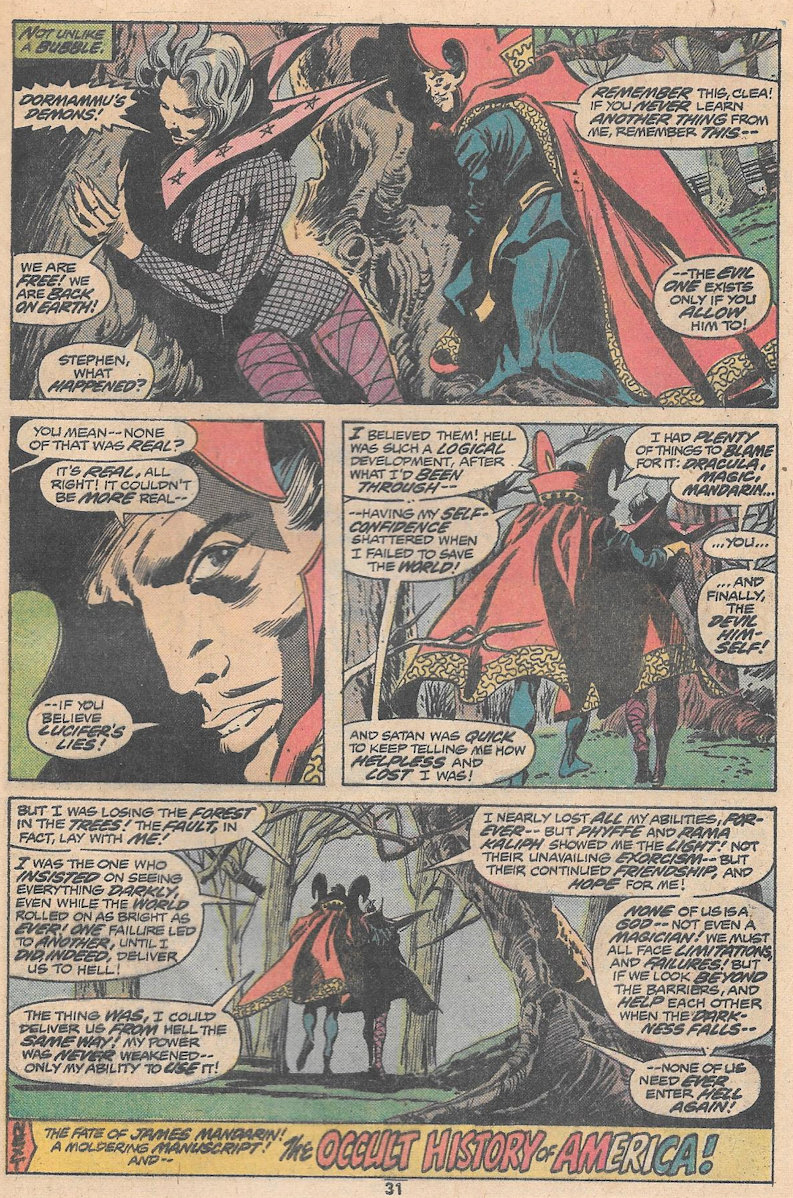 And he’s in some park with Clea. And that’s the ending…

Not very satisfying. Story lacks a lot of punch and an understandable villain. How does Satan mesh with the rest of Marvel’s devils and pantheon? Was this the same guy that gave his demon seed to the mom of Daimon Hellstrom, Son of Satan? By they way, anyone catch that show on Hulu yet? You should probably check it out. Better than wasting your time wandering around Hell as I have this Halloween. Speaking of which, it’s time to get out of here. See all of you tomorrow when we WON’T be in for a hot time.

Posted by SonOfCthulhu at 3:21 PM