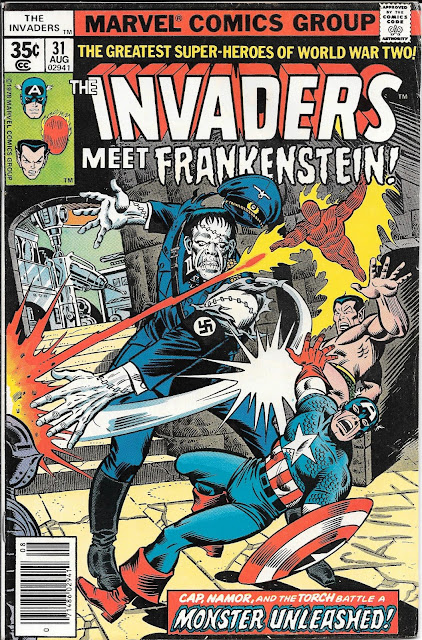 Nazi Frankenstein must be deployed!

The Invaders, Marvel’s attempt to cash in on WWII superhero comics two decades after that conflict ended, threw out the vampire trope in issue number 7. They didn’t do a half-bad job of it either. Baron Blood remains a great concept, a Nazi vampire with the cool look of a supervillain.

They don’t appear to have fallen down the werewolf hole, but with this issue they pulled out Frankenstein, dressed him up in a Nazi officer uniform, and walked him around a bit. And that sounds figurative, but it actually is mostly literal. You’ll see, you’ll see.

We begin here, in the past for us but in the future of the story the issue tells. The Invaders are taking a brief respite at Farnsworth Manor, somewhere-somewhere. Speedster member Spitfire is cleaning the manor and finds a giant Nazi hat. Before she can wonder who’s hat this is, in walks Captain America, ready to lay down the story. 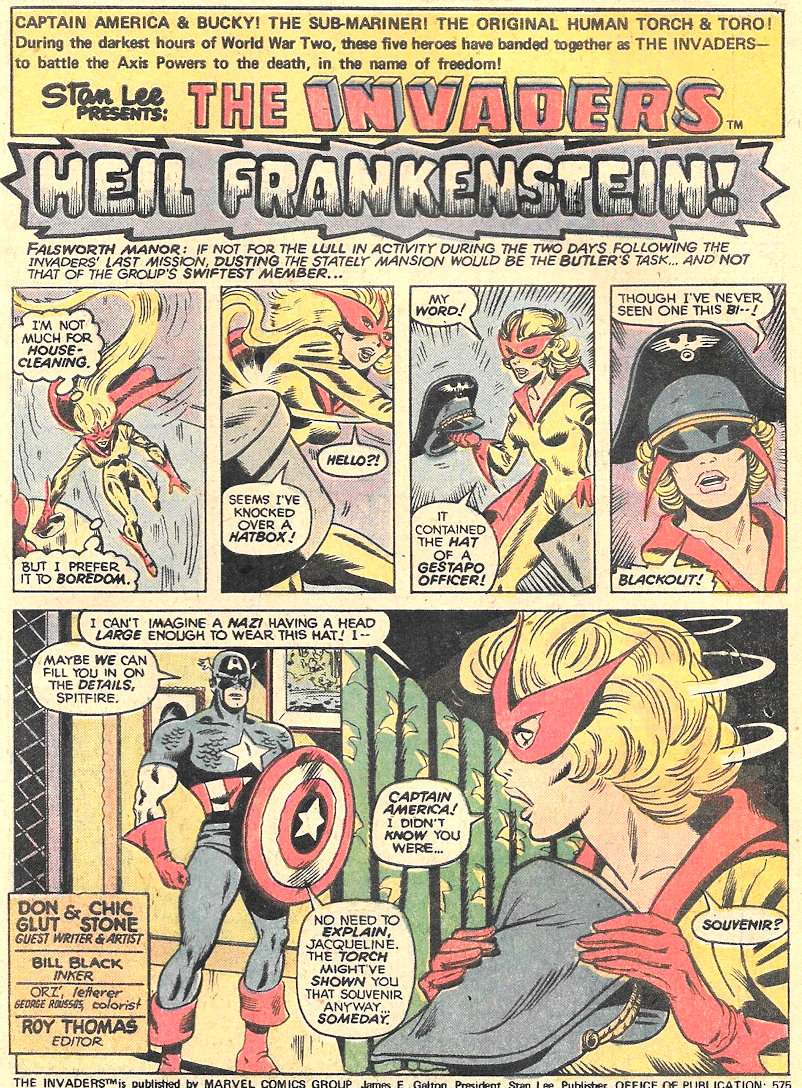 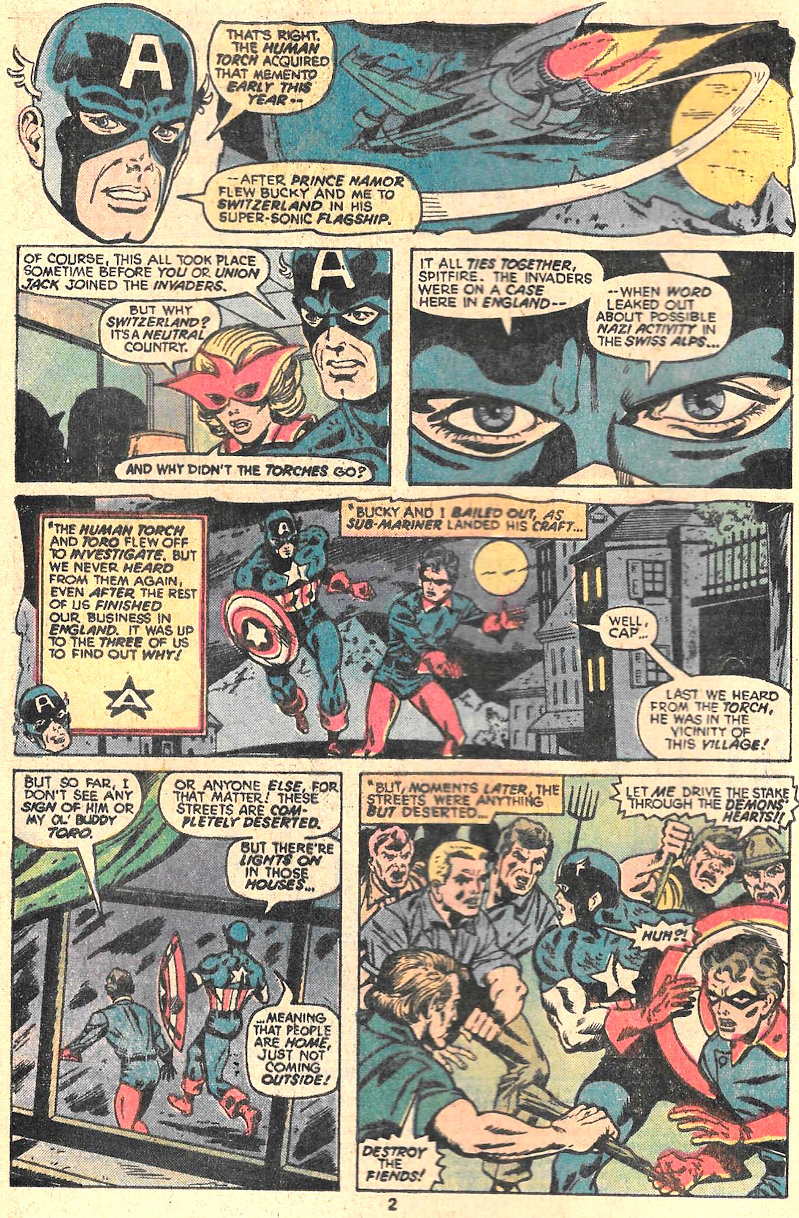 And off we go to the Swiss Alps, where Cap, Bucky, and Namor are accosted upon arrival by a torch bearing mob. Once introductions are made, the villagers calm a bit, but what could have gotten them in such a frevor? Why, none other than a “horror beyond all comprehension.” 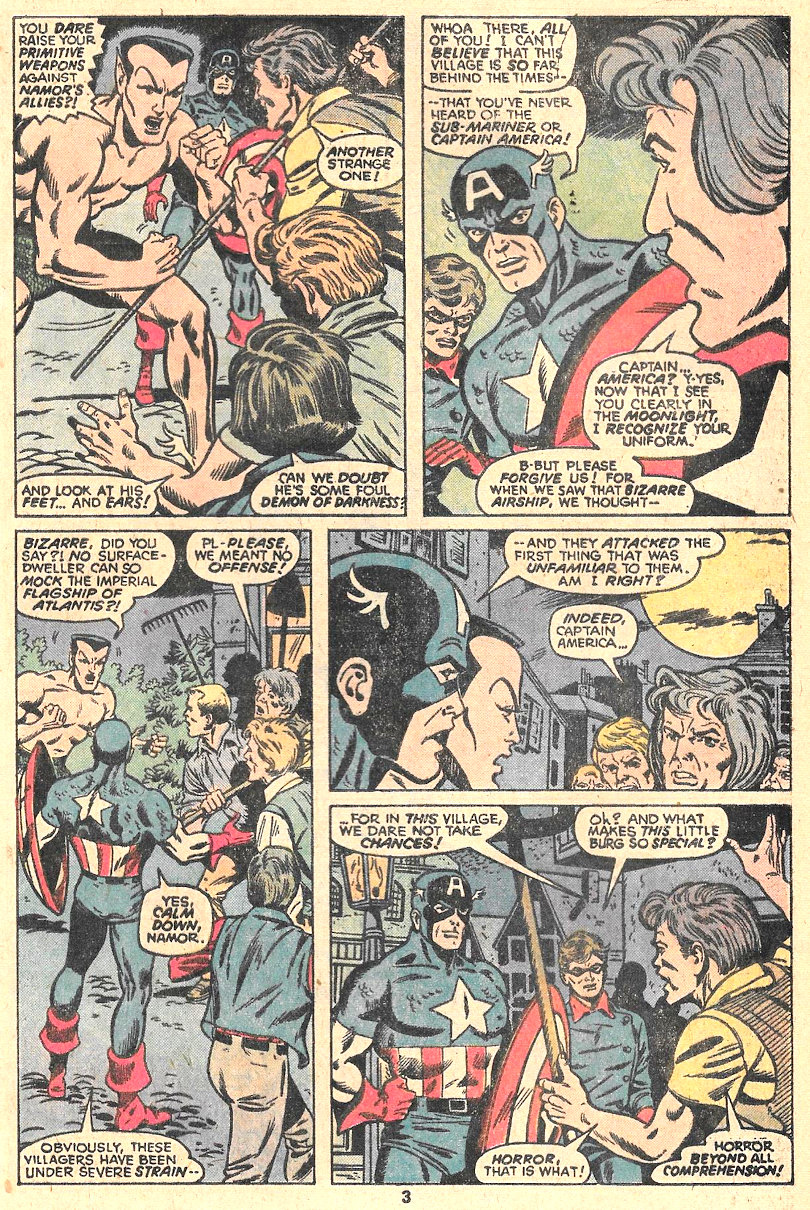 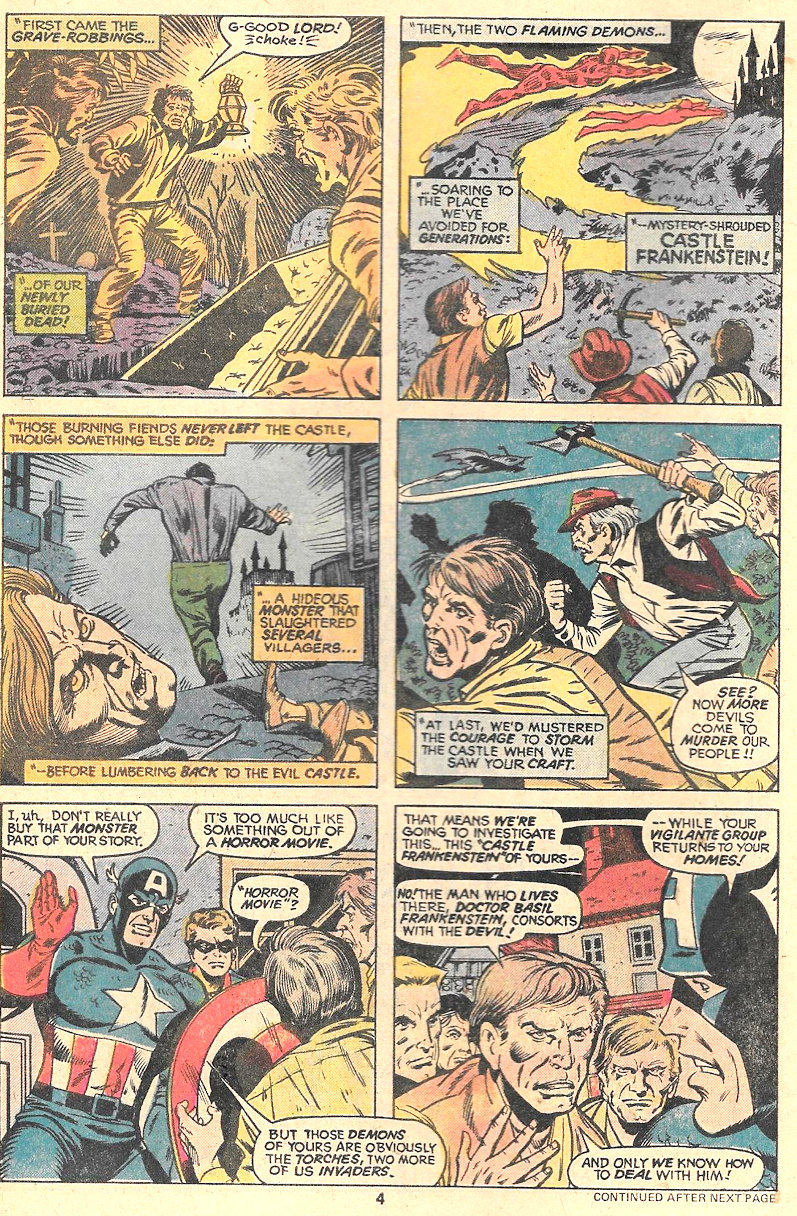 First they had to endure their dead being dug up. Then the torches arrived and weren’t as social as cap and company, heading straight for the cliched castle on the mountainside above the village. And lastly came visits from a giant stalking humanoid monster, who killed several villagers. I’m only gonna say this once, people: pack you crap up and get out of there! That would have been my solution. This group decides to take the fight to the castle and its new Baron Frankenstein occupant. 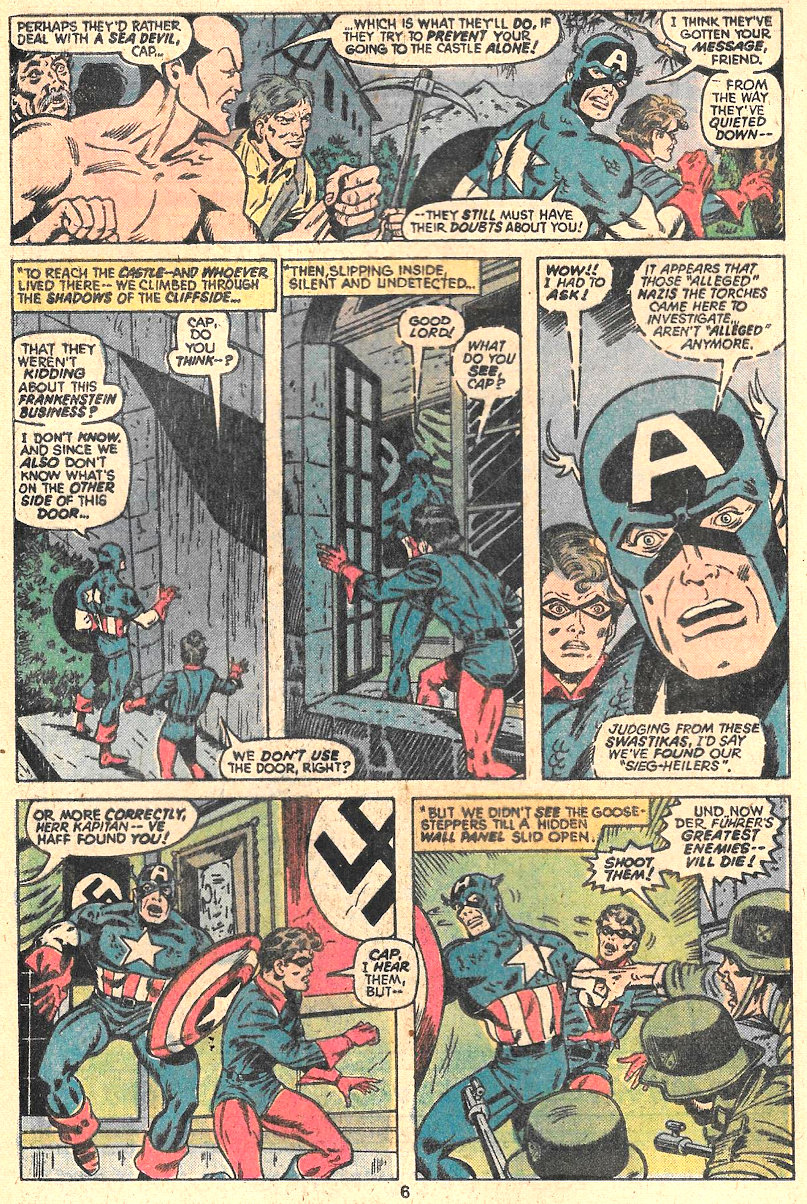 Cap and Bucky head to the castle in their stead, leaving Namor to prevent the angry villagers from following. Leave it to this book to utilize a horror trope right from the get-go. And splitting up appears to be the wrong thing to do, as the pair runs into a squad of Nazi soldiers. Of course this is Cap and Bucky, so the Razis are routed in no time. And then this creature steps out of the shadows… 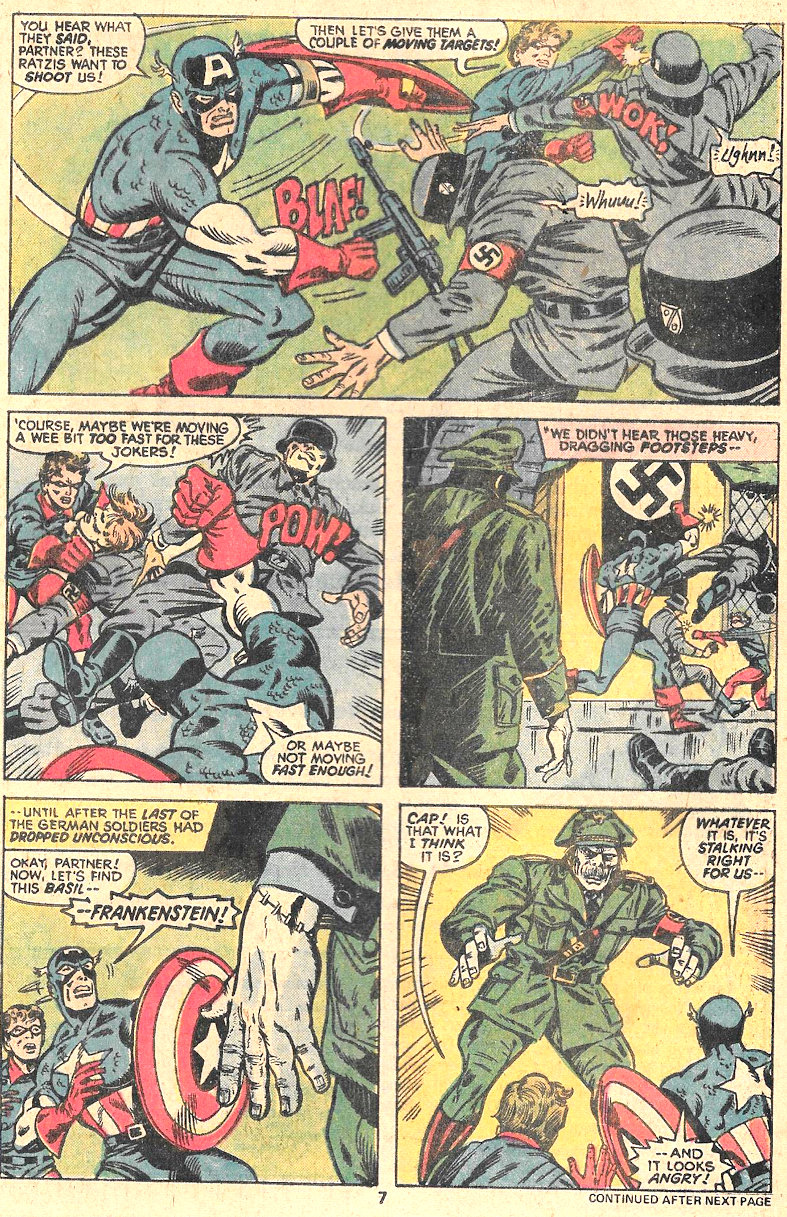 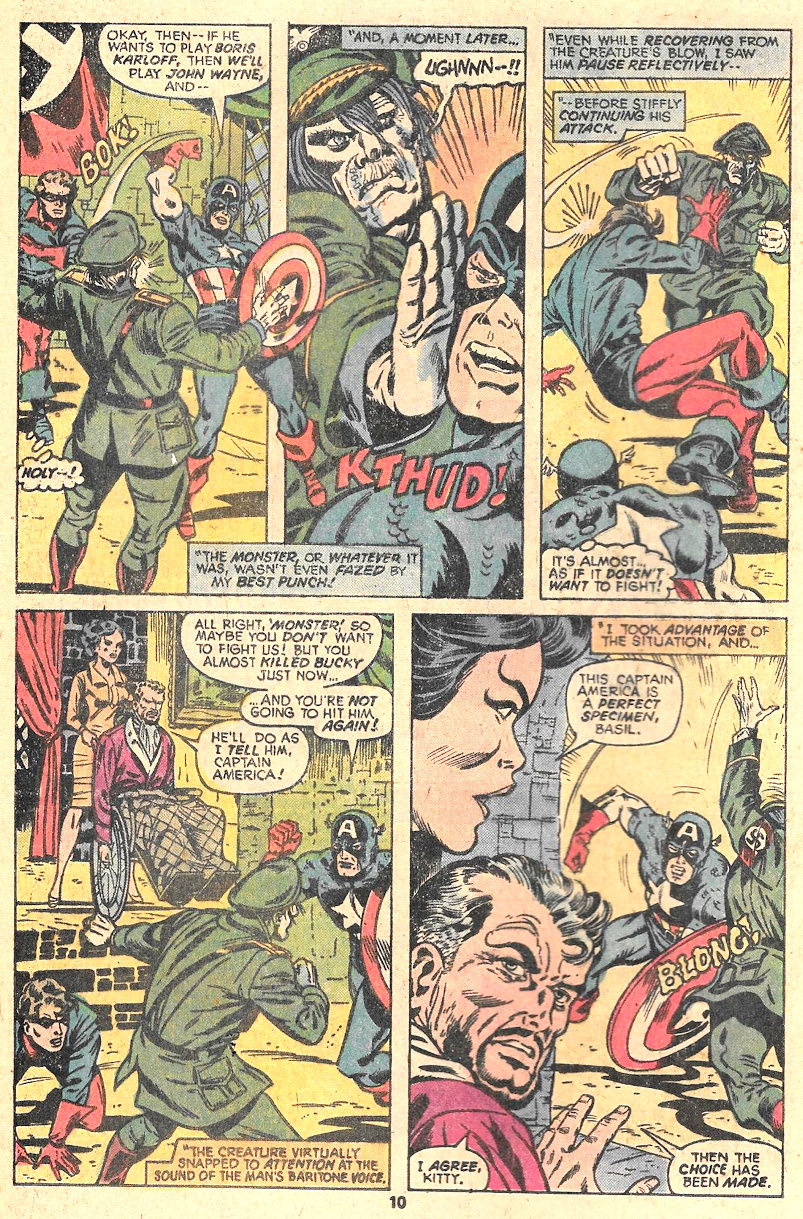 That’s Frankenstein’s monster, make no mistake. While Daddy Frank watches from the shadows, the creature puts the smackdown on both our heroes and then drags them off stage right. When next we see them, they are strapped down next to Toro, who is being waterboarded repeatedly to prevent him from flaming on. The Human Torch is no where to be seen. Oh, and we get the final panel showing Frank and Frank, Jr. are both Nazis. Although this appears to be all his scientist “daddy” has taught the creature. 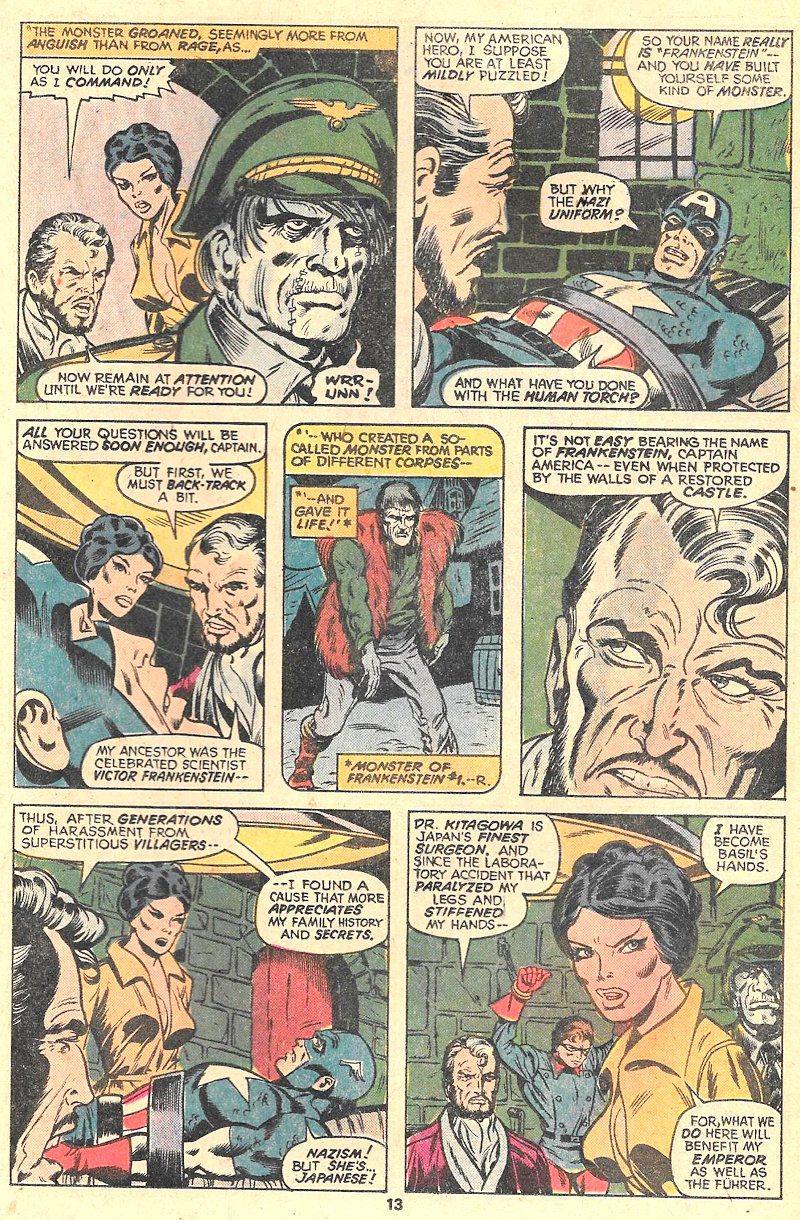 Then ‘stein senior gets to monologuing about how hard it is to be a Frankenstein, heir to the name and legacy of the monster maker. He was forced into this line of work (instead of just moving away and changing his name or something). But due to his paralyzed legs stiff fingers, he has to have his Japanese lab assistant Dr. Kitagowa to do all the hard work…like digging up bodies and lugging them to the castle, one supposes. 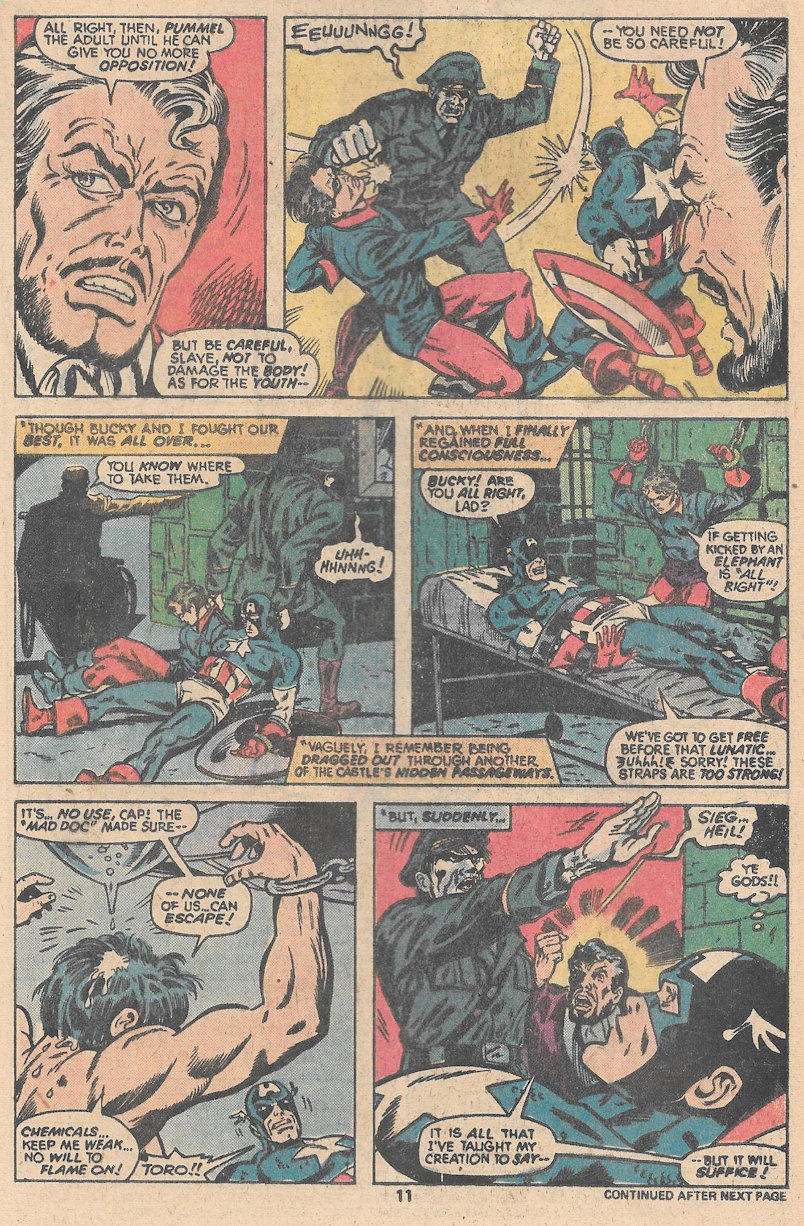 Oh, and they have a master plan too. They are going to make an army of Frankenstein soldiers for Hitler and put Basil’s brain in Cap’s body. And we also find out the Human Torch is in a glass chamber with his energies being drained to power the Baron’s experiments. 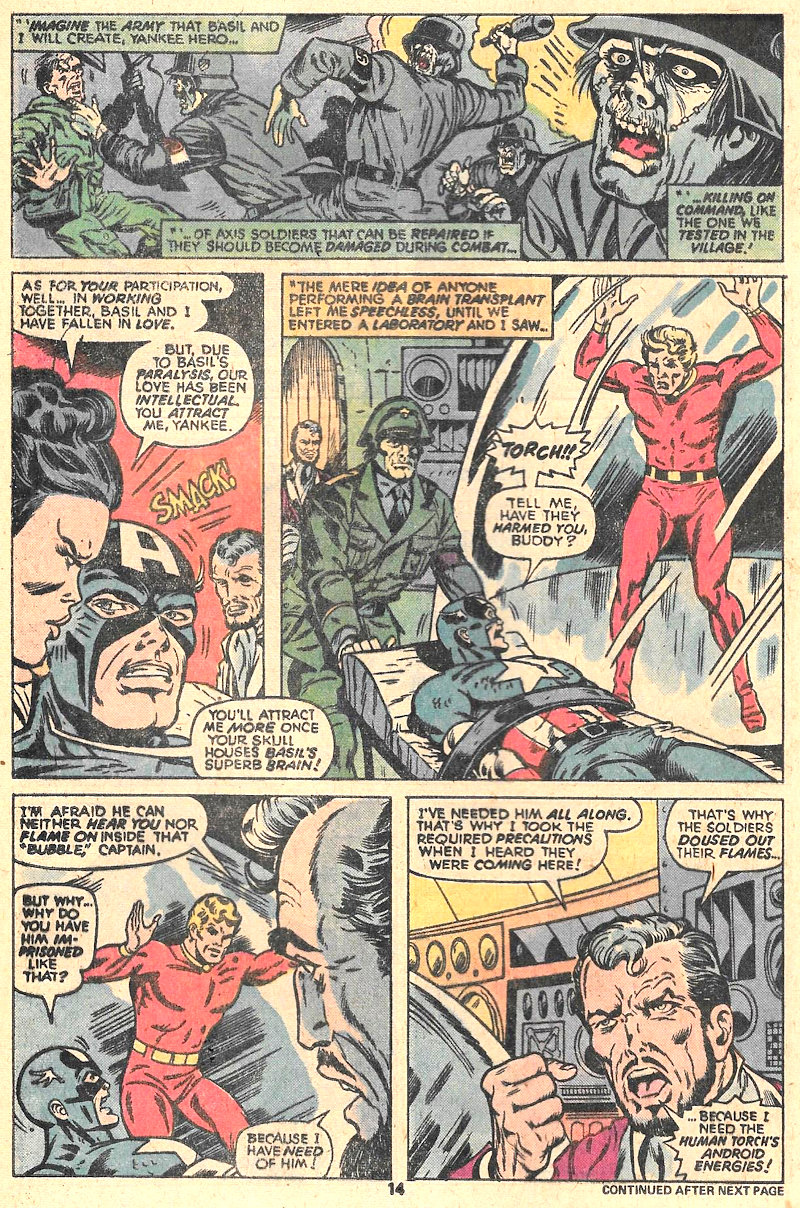 With that revelation, the bad Dr. switches on his evil equipment making flashing lights outside. This enrages the villagers anew and provokes a curious Namor to finally give up trying to corral them in town. He takes off to the castle and catches a glimpse through one of the upper windows of the doc’s mad scientist layout. 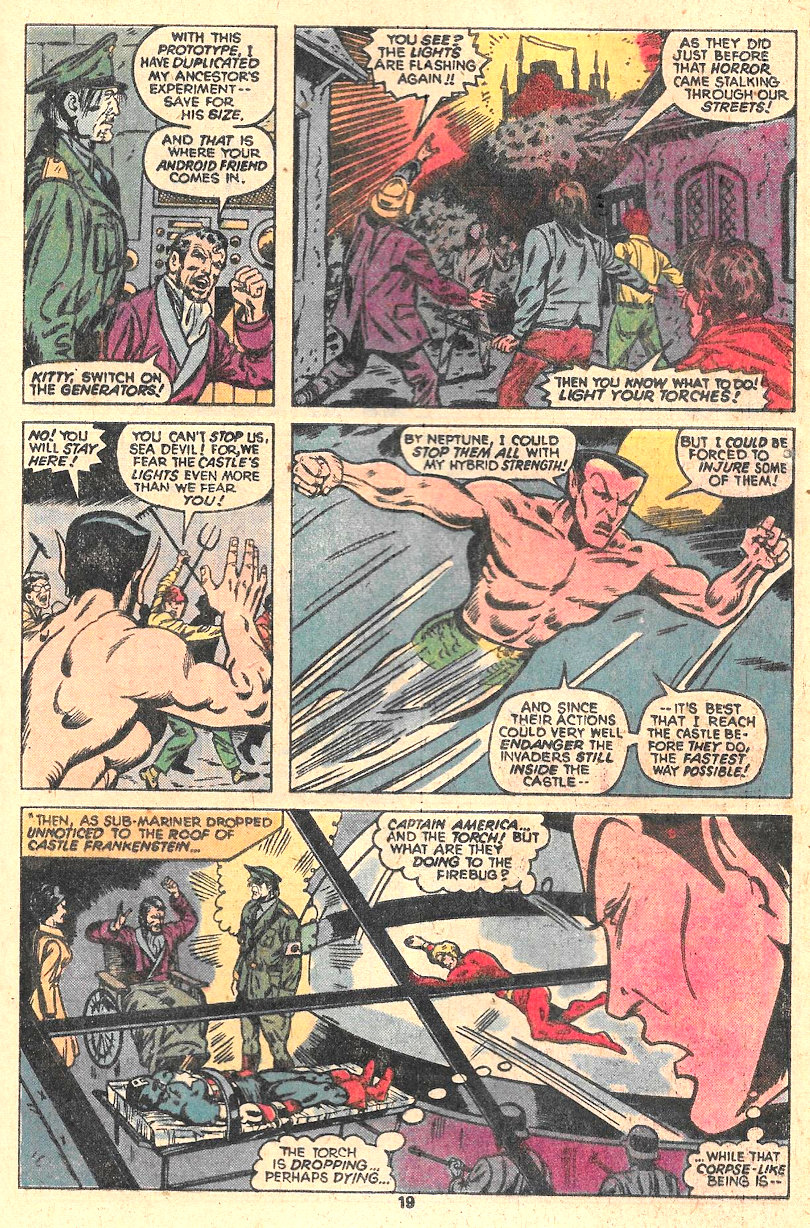 Meanwhile, the Human Torch’s energy causes the monster of Frankenstein t grow in size so much so that he bursts free of the bonds holding him. The villages start to riot and rush the castle. Namor, meanwhile has seen enough, and uses one of the giant electric pole thingies to smash both the skylight… 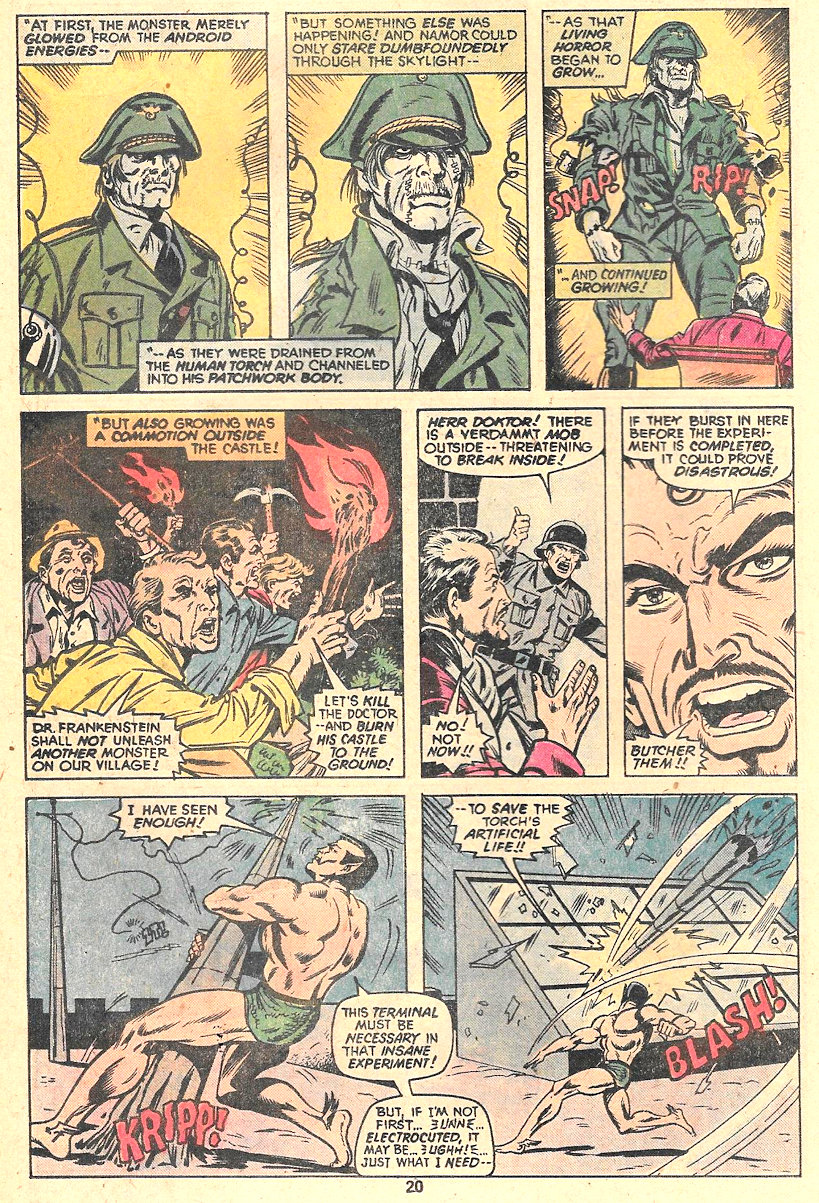 …and the Torch’s enclosure. As he flames on, the mob takes on the Nazis. This gives Torch time to burn Cap’s bonds through… 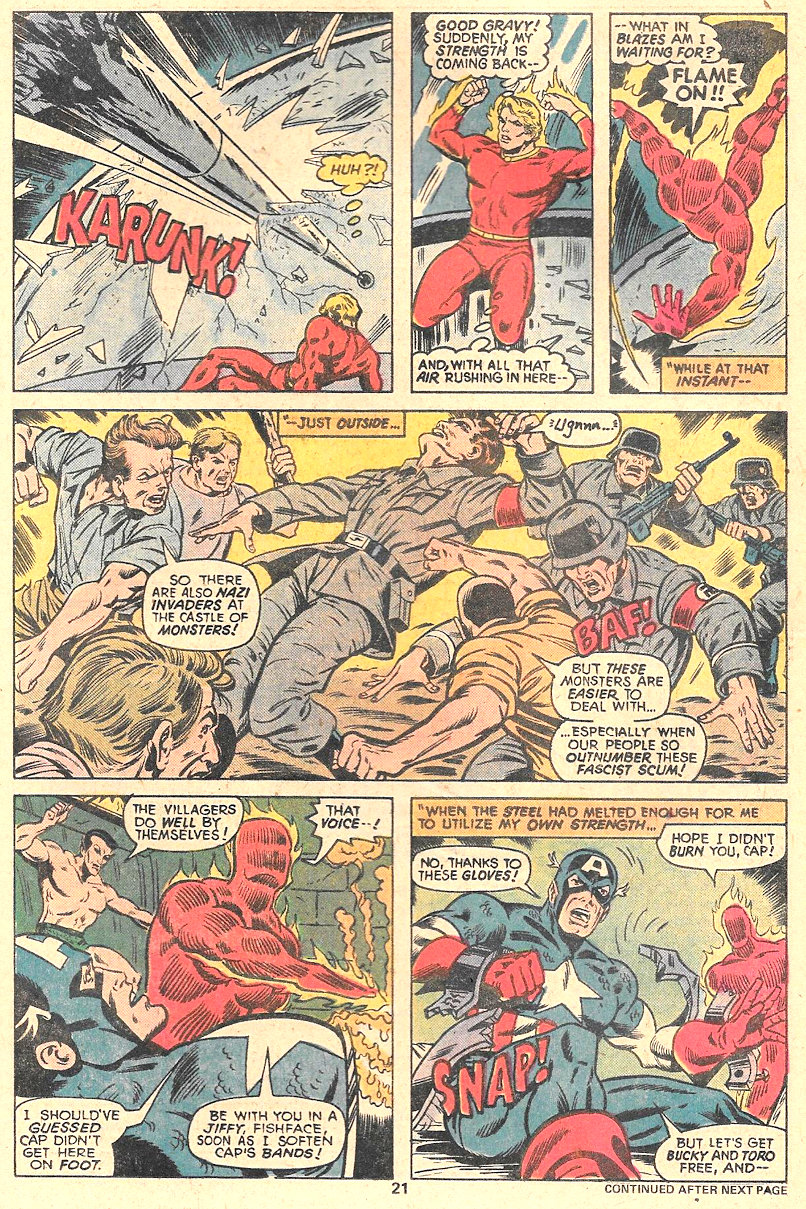 ….which leads to a five-on-one dogpile on Frankenstein’s monster (what? You though someone was gonna fight they guy in the wheelchair? This ain’t an X-Men book, bubby.)… 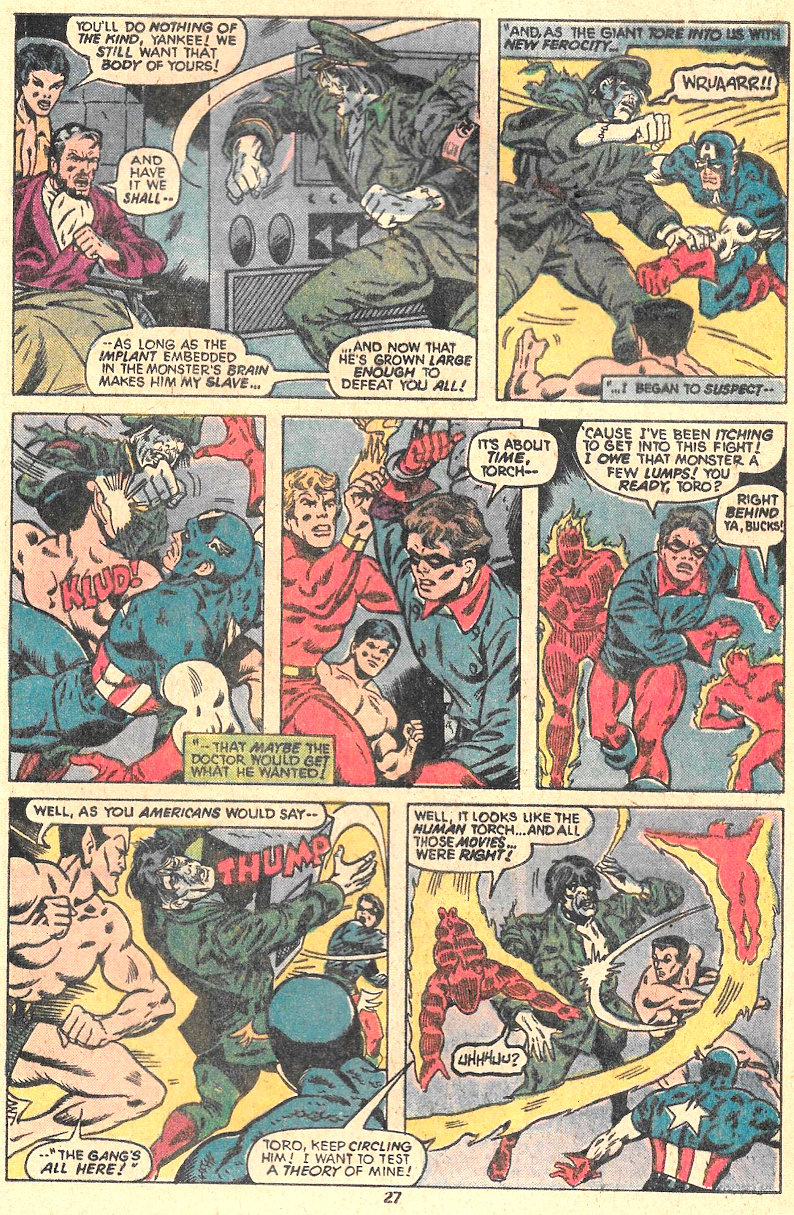 …and our heroes make the monster cry. No. Seriously. They make him cry. 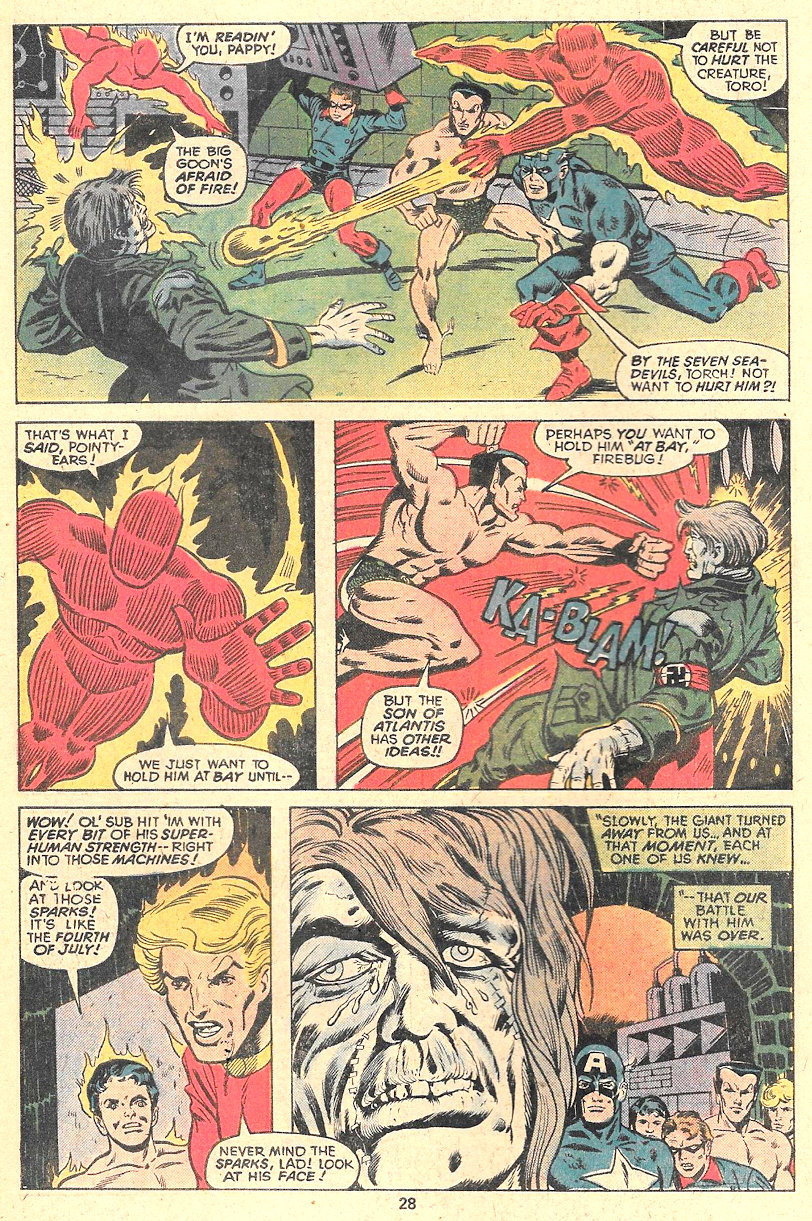 And he gets so sad that he nabs both of his creators and hurls them and himself from the castle walls to their deaths. 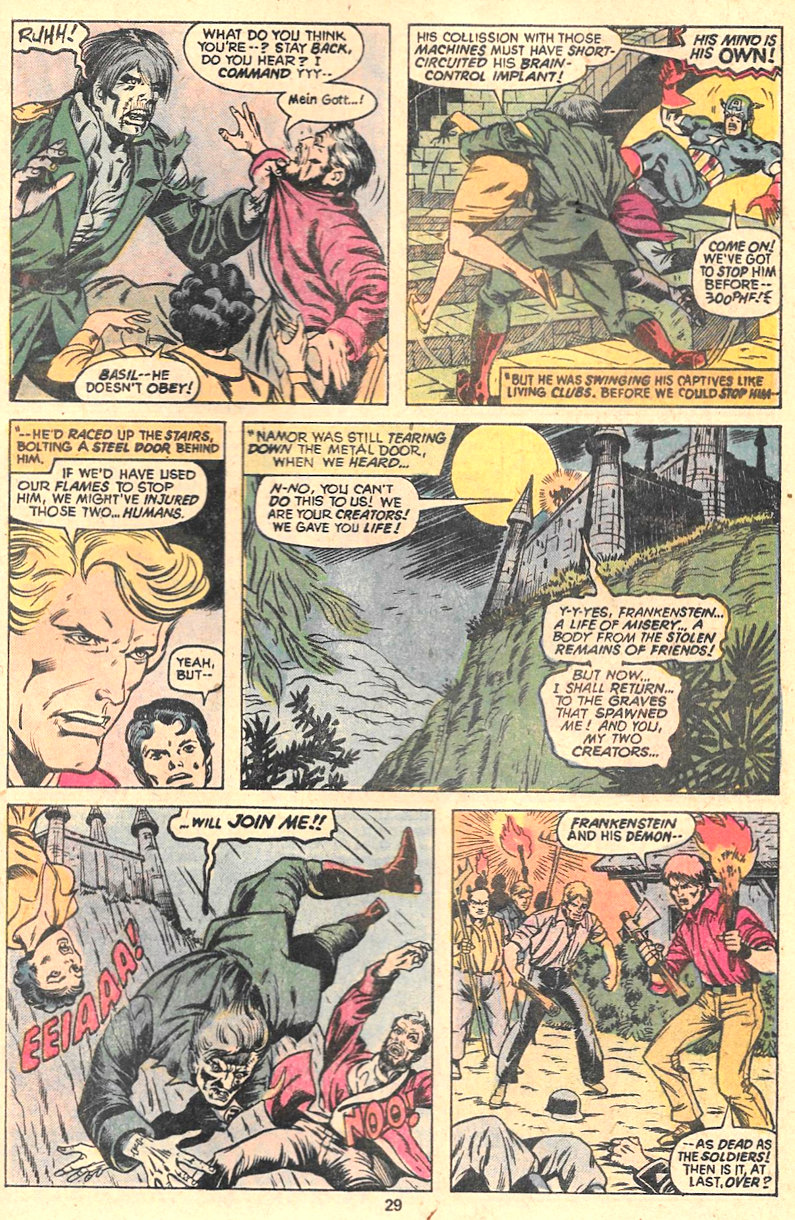 The villagers want to burn down the castle after all that has transpired, but the Human Torch won’t let ‘em because the monster was a hero in the end or some balderdash. We have a one panel return to our wrapper for this tale and a tease that Thor will be making an appearance next issue…and we’re out! 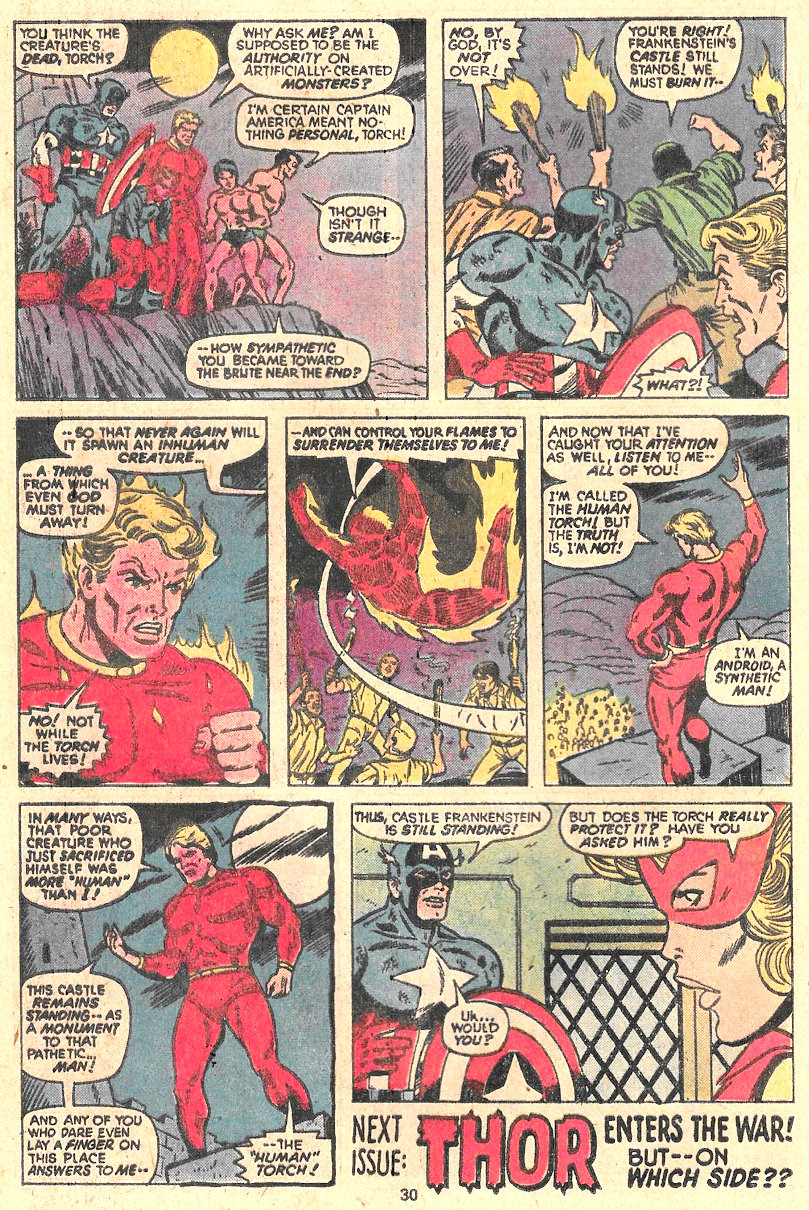 Seventeen pages! I was shocked at how flimsy this issue was once I finished scanning and had to go back twice to recheck my count. Not eeking out 20 pages is a cardinal sin in a book from the 70’s, and this one couldn’t even muster 18. Still, it is a complete story, but there were several fight scenes that appeared abbreviated and that ending might have been performed in a rush (okay, Frank throws everybody off a cliff – The End! What about the Nazis? Oh, uh…they jump after them – The End! Lolz).

Still, you got to see Cap punching Frankenstein. That’s worth a couple of bits.

Posted by SonOfCthulhu at 3:24 AM