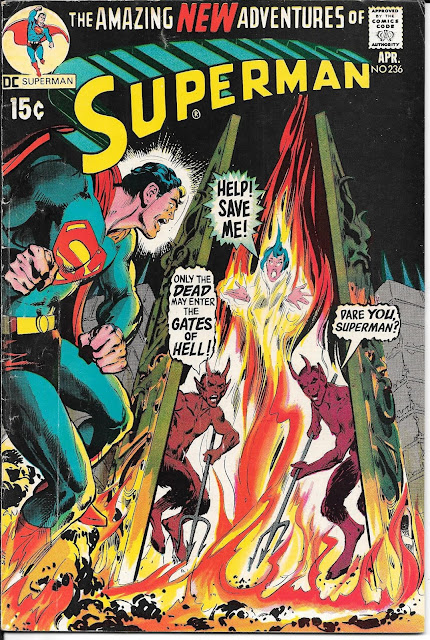 Get ready for the old bait-n-switch

Time for some silver-age Superman fun with none-other than Julius Schwartz at the helm of this one…meaning that cover image is going to work out to be some part of an interestingly told lie. Schwartz either pioneered or perfected the art of the bait-and-switch cover, depending on who you ask. To me it matters little if he did it first or best, the fact that the covers he placed on DC books during his tenure are some of the most thought-provoking and outlandish in all of comic history makes them worth collecting.

And this one apparently spoke to me so much that I bought the damn thing TWICE! That’s right, I selected this cover two times from Half-Price’s premium bins. Must have something to do with Superman vs Devils, which typically makes for interesting stories, in my humble opinion. Not good, mind you, but interesting. Supes weakness to magic coupled with his upstanding moral character make a story where his enemy challenges him on both fronts to be better than average. Let’s see if this one passes muster or not.

We begin with the Superman and Batman team take down a pair of robbers, and while Supes is still revved up and raring to go, Bats is beat tired. So, the pair part ways. 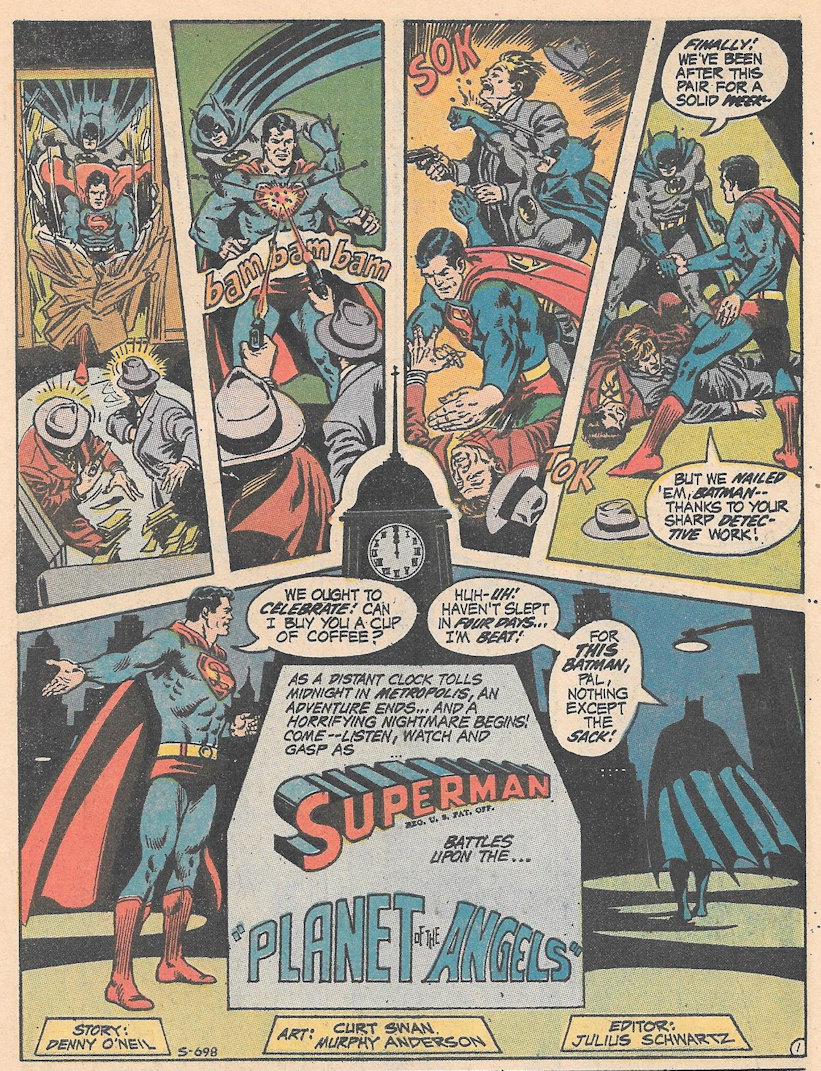 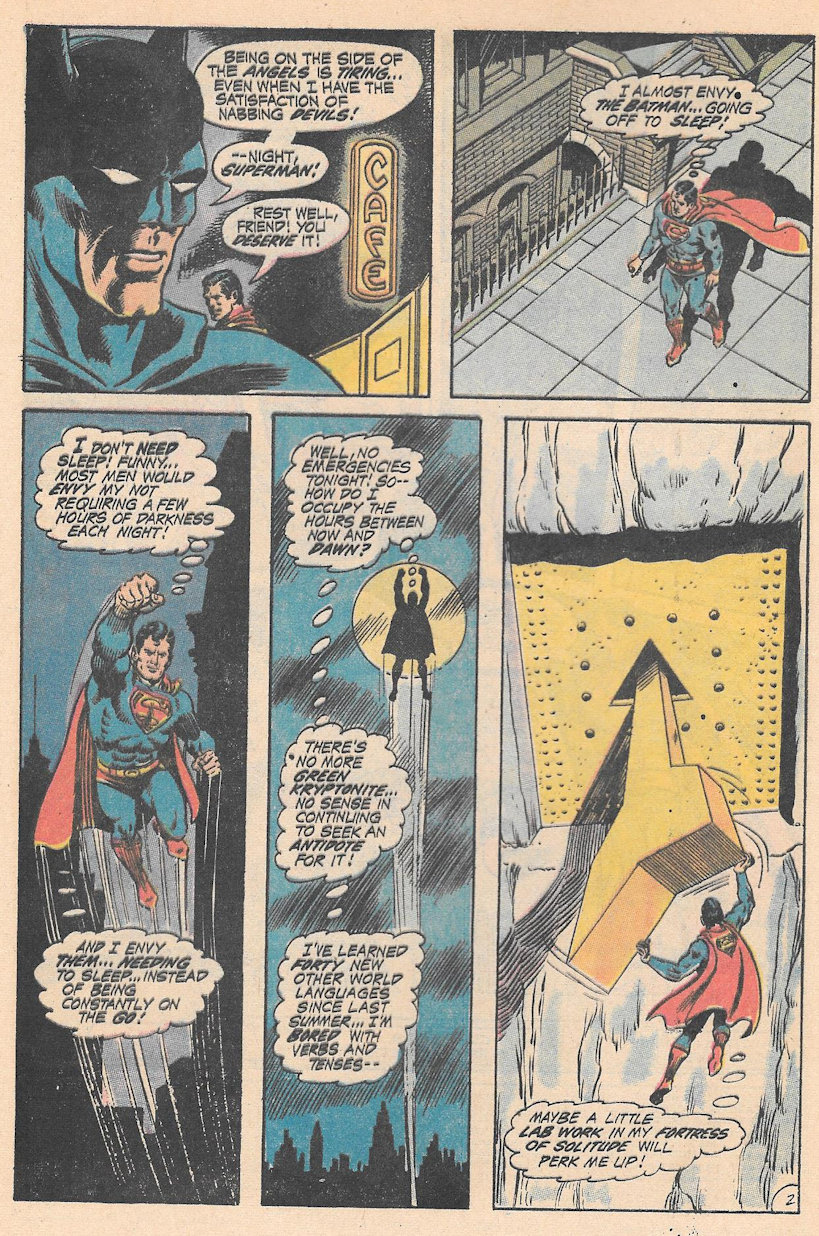 Our bored Ubermench heads back to the Fortress of Solitude to work on a project where he is mapping his Kryptonian brain pattern. The machine creates an odd effect on Supes though, sending our caped hero to Hell. 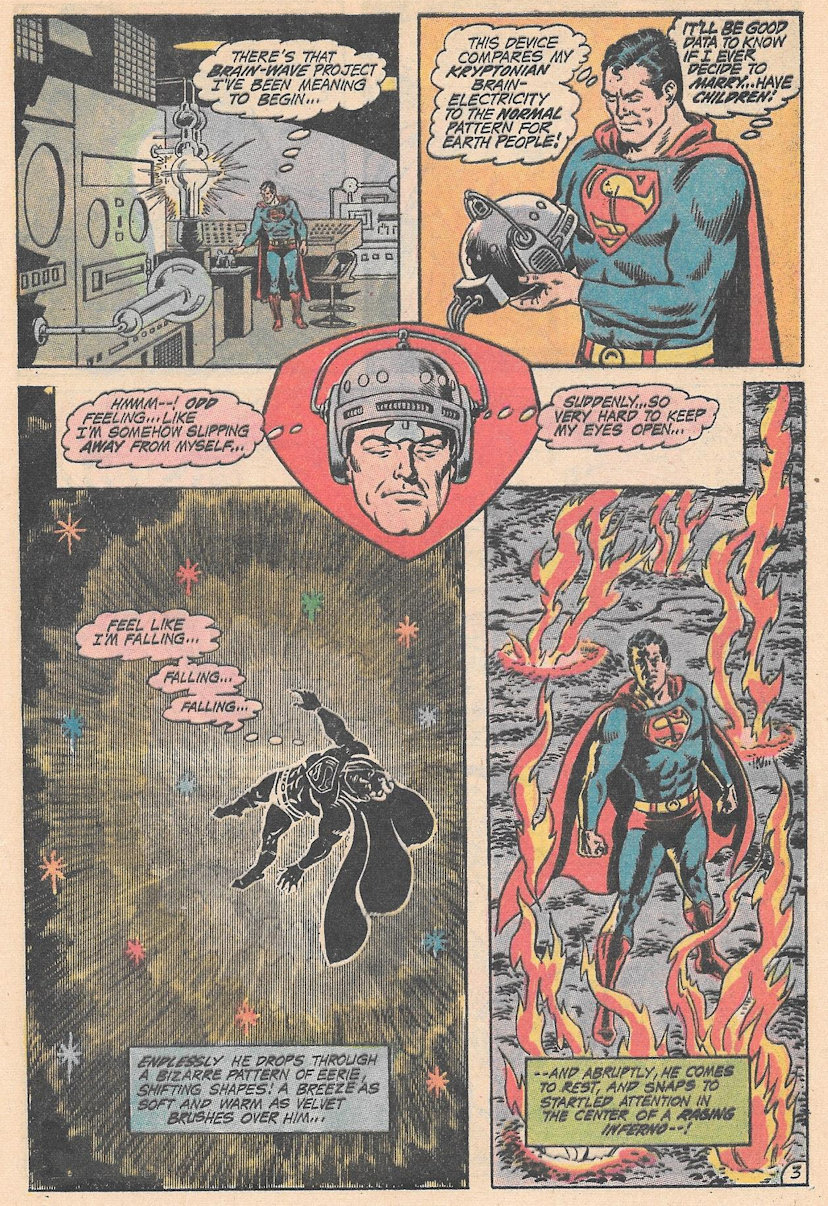 He runs a foul of a hoard of devils while down there, who poke him with pitchforks. Oddly, these seem to have no more effect on him than ordinary weapons would, so already I’m getting the “all is not what it seems” vibe going here. After he tosses a few of them around, the horned foes race off at the arrival of an off-panel guest. 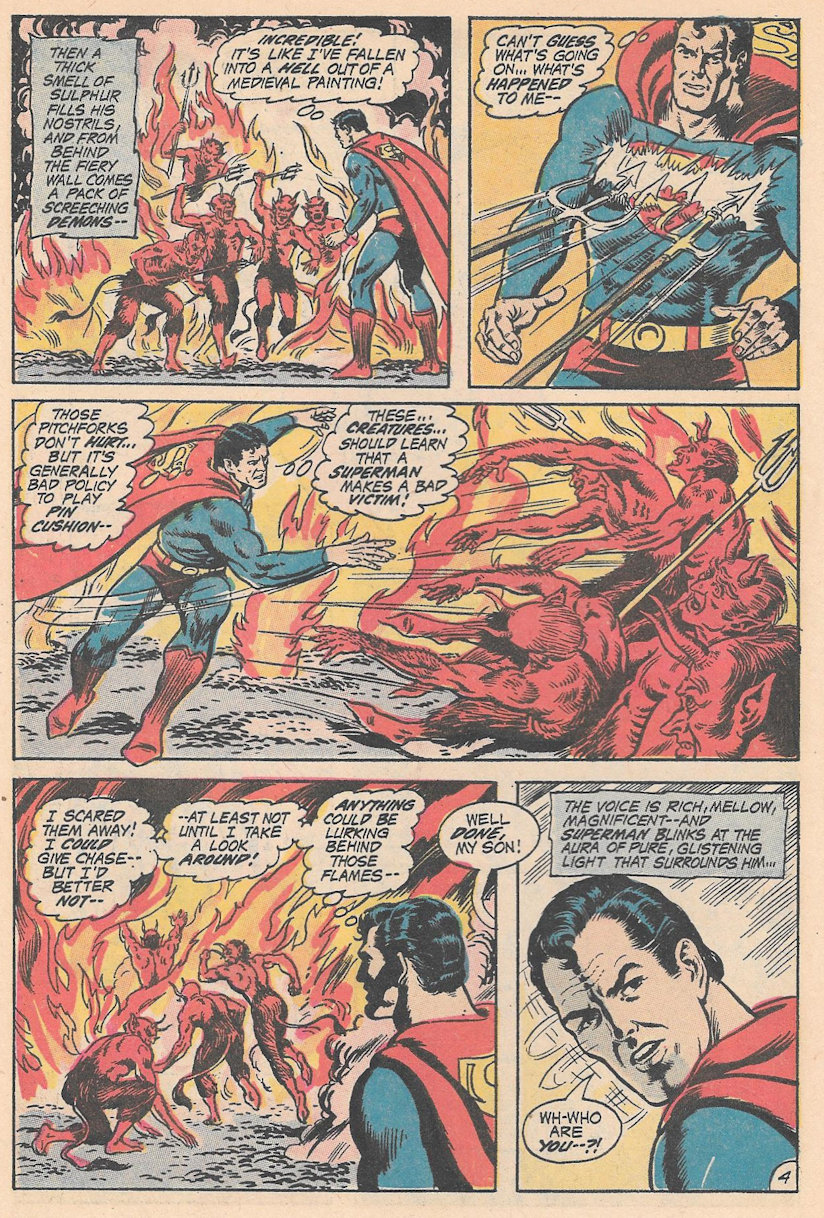 Or guests, I should say. Superman bumps into three angels named after the only ones I remember being mentioned in the good book. They let on that Superman is at the divide between Heaven and Hell. Supes is upset that he appears to have died, but angel Gabriel states he just has to prove himself worthy to be allowed to stay in Heaven. Which begs the question that if silver-age Superman ISN’T worthy of Heaven, aint none of us folks getting in, right? 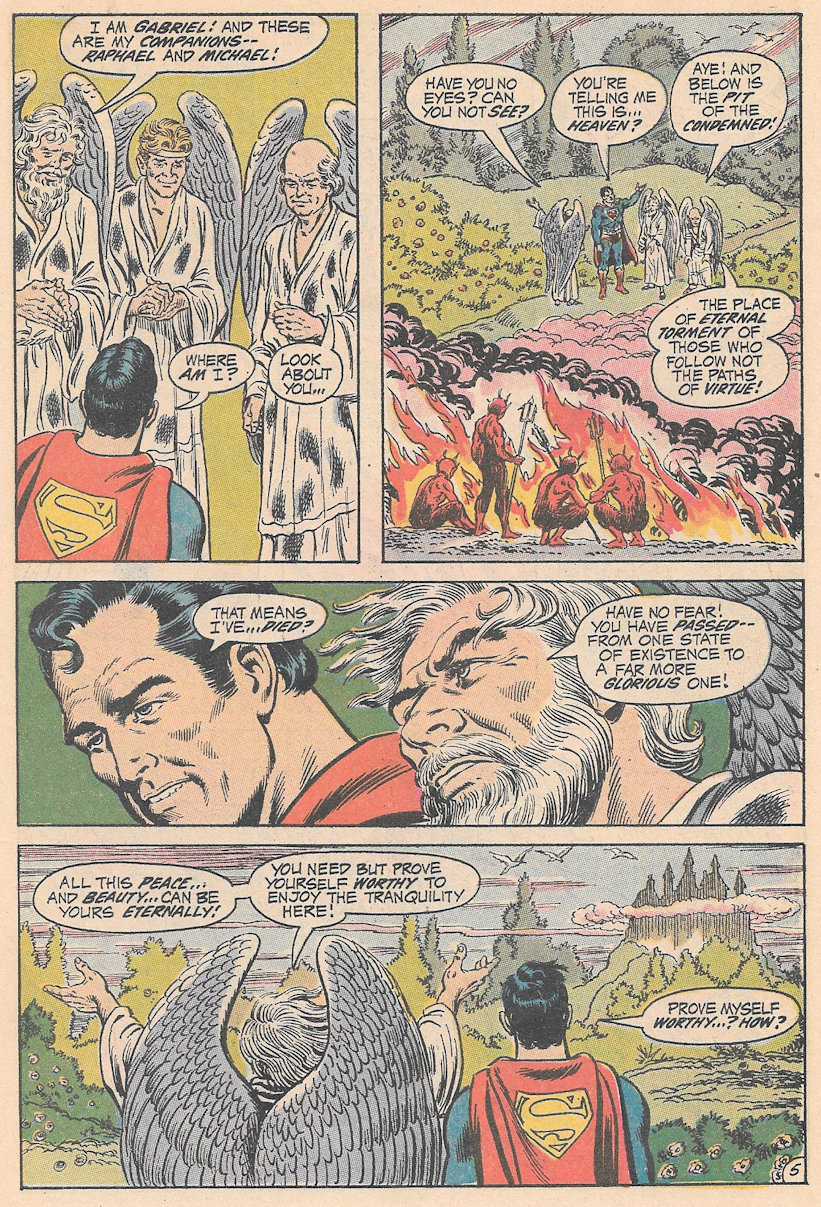 Anyway, Supes’ task is to travel into “the pit” and break the lock on a door to prove the might of the angels and so they can slay all of them. Superman takes off and arrives at the steel-doored gate… 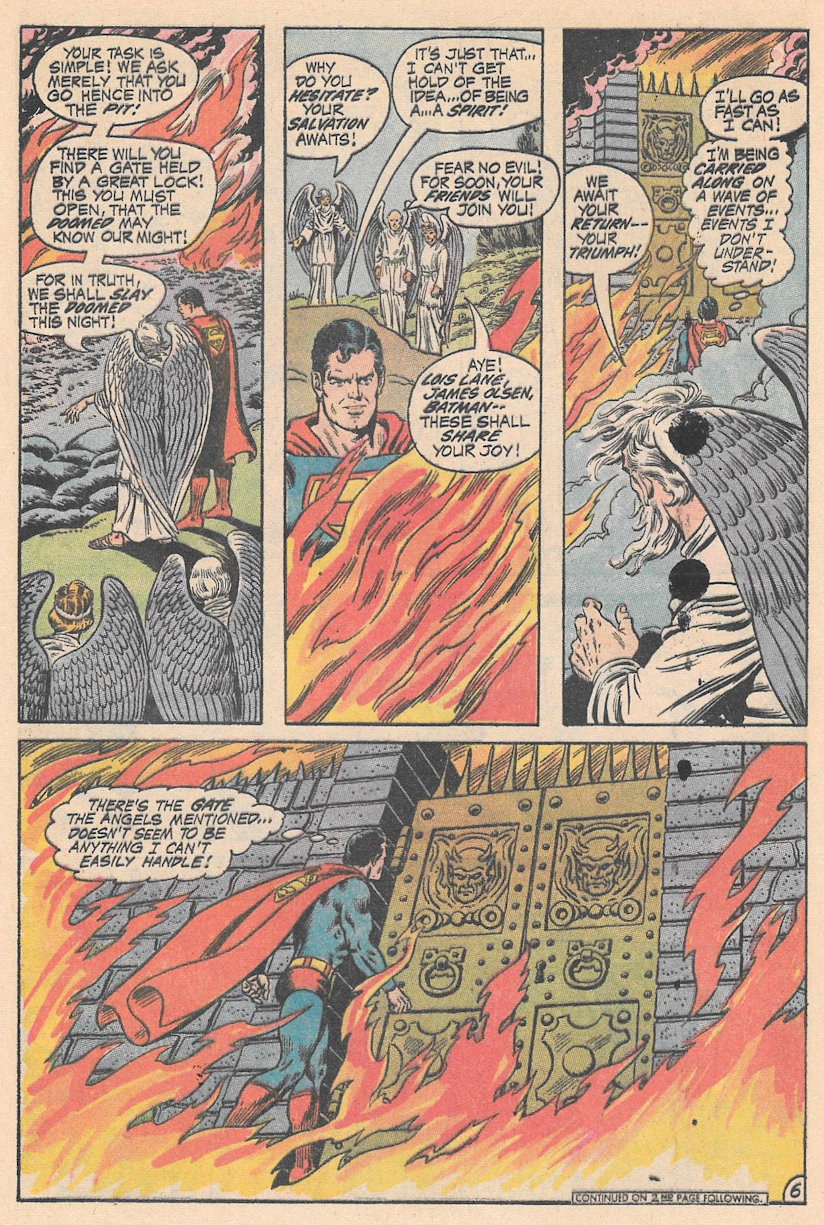 …and he’s about to tear it open, when sinister images of Jimmy, Lois, and Batman appear in the flames, grinning at the man of steel. He tries to get them to speak, but the figures vanish before he can…and in an act of rebellion, Superman decides to tunnel under the gate to find out what’s on the other side before ripping it open. 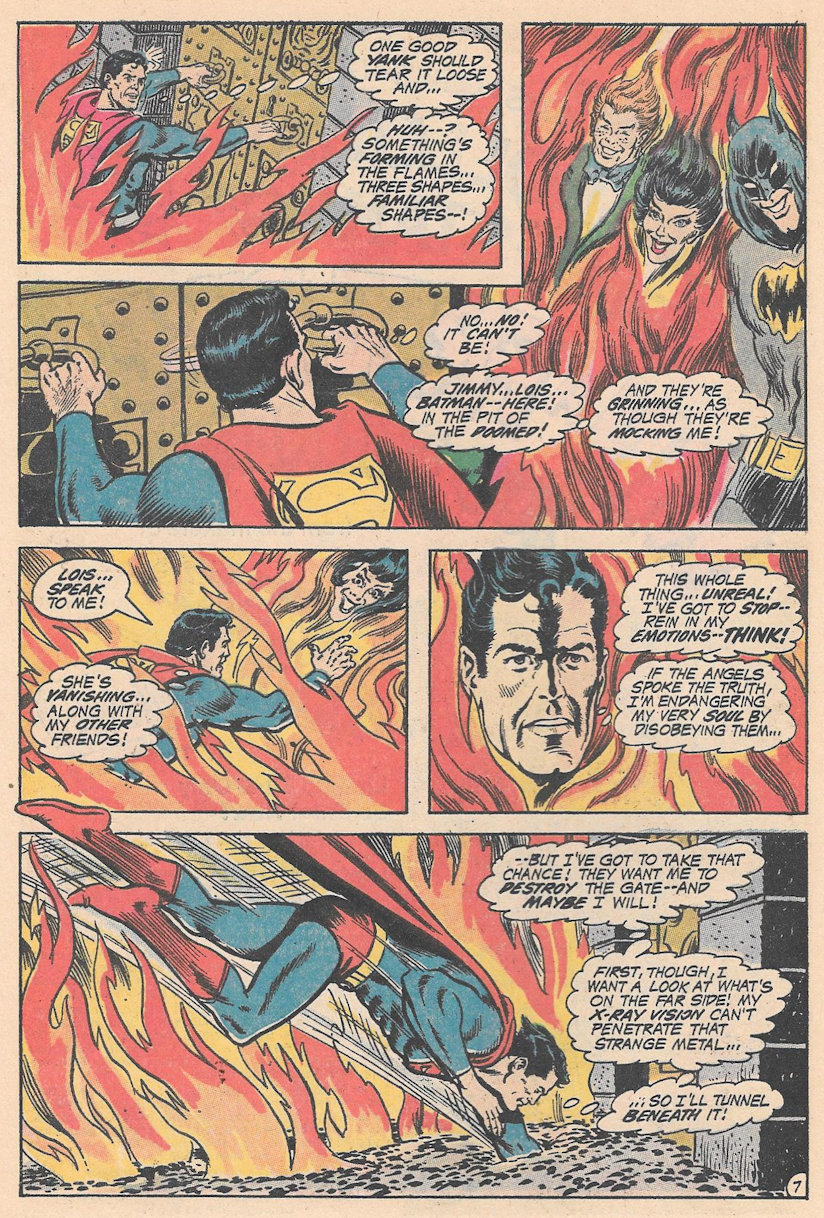 What he discovers is a horde of devils cowering behind the defenses. They attack him, but again their weapons don’t seem to pack the magical might to do him any harm. Supes trounces them without working up a sweat. 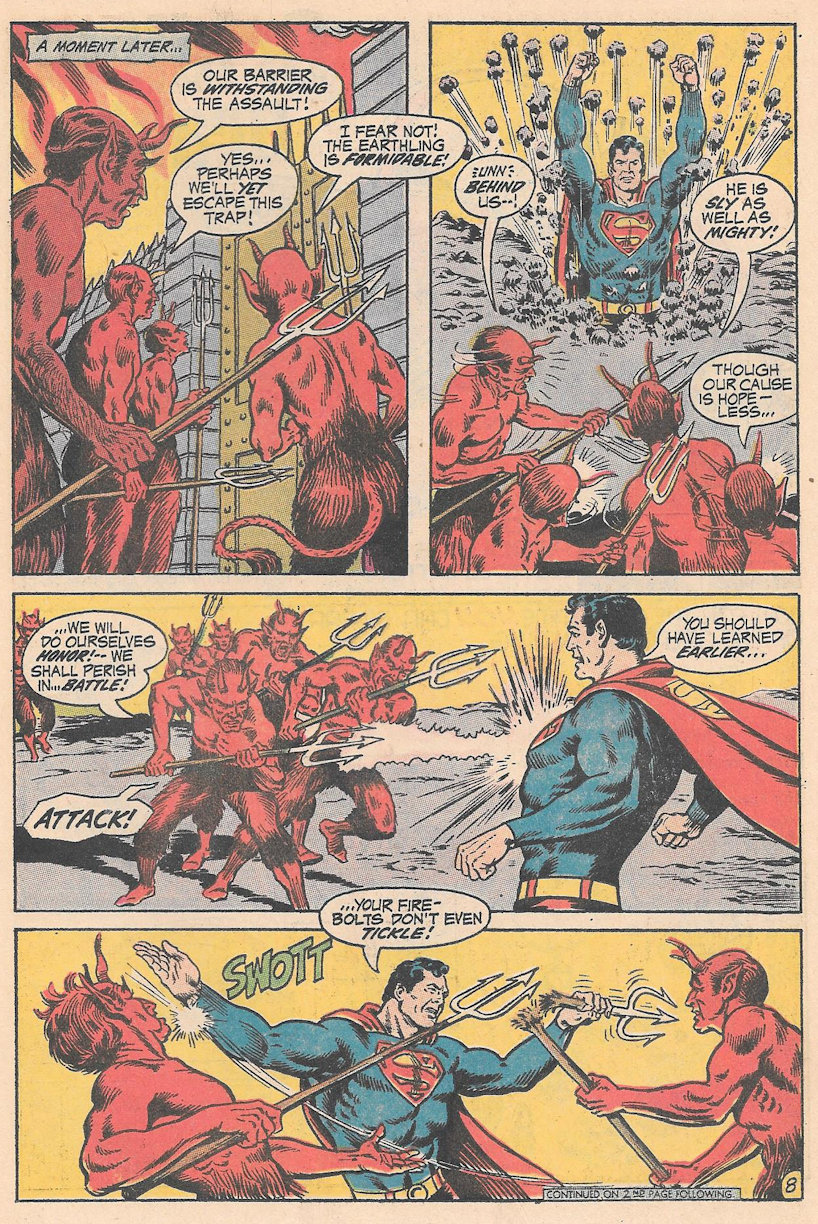 While I’ve been focusing on this one facet of the story, Supes has been mulling over things like angels who talk of killing, people who aren’t dead yet showing up in “Hell,” and the dirty robes of the angels. 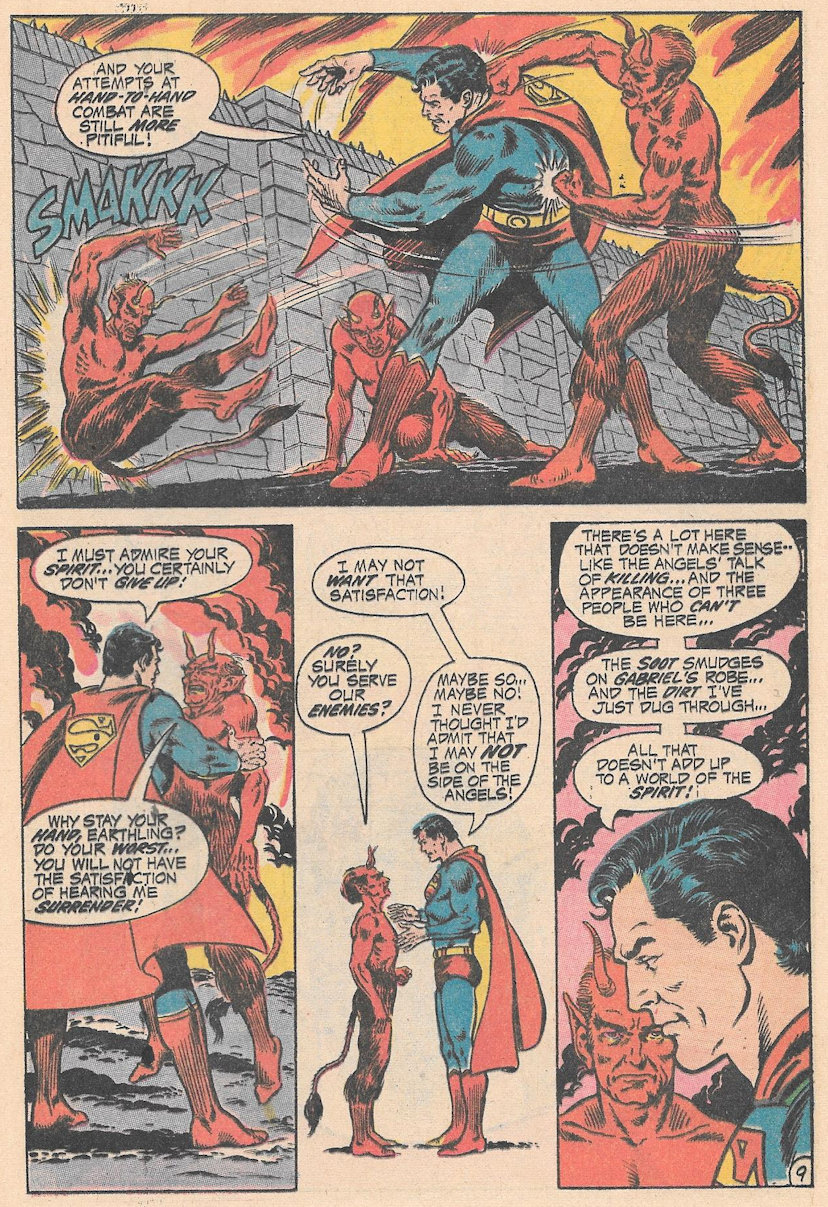 The head devil gets Superman to focus on him and we find that he is an alien, not a pit fiend. Superman has been mind-controlled. The angels are actually criminal-murderers (which are the worst kind of murderers) who have trapped their jailer’s transport on a planet while they plot taking over the ship to escape. The “wall” is actually a circle of nuclear flam around the ship that keeps the bad angels at bay. 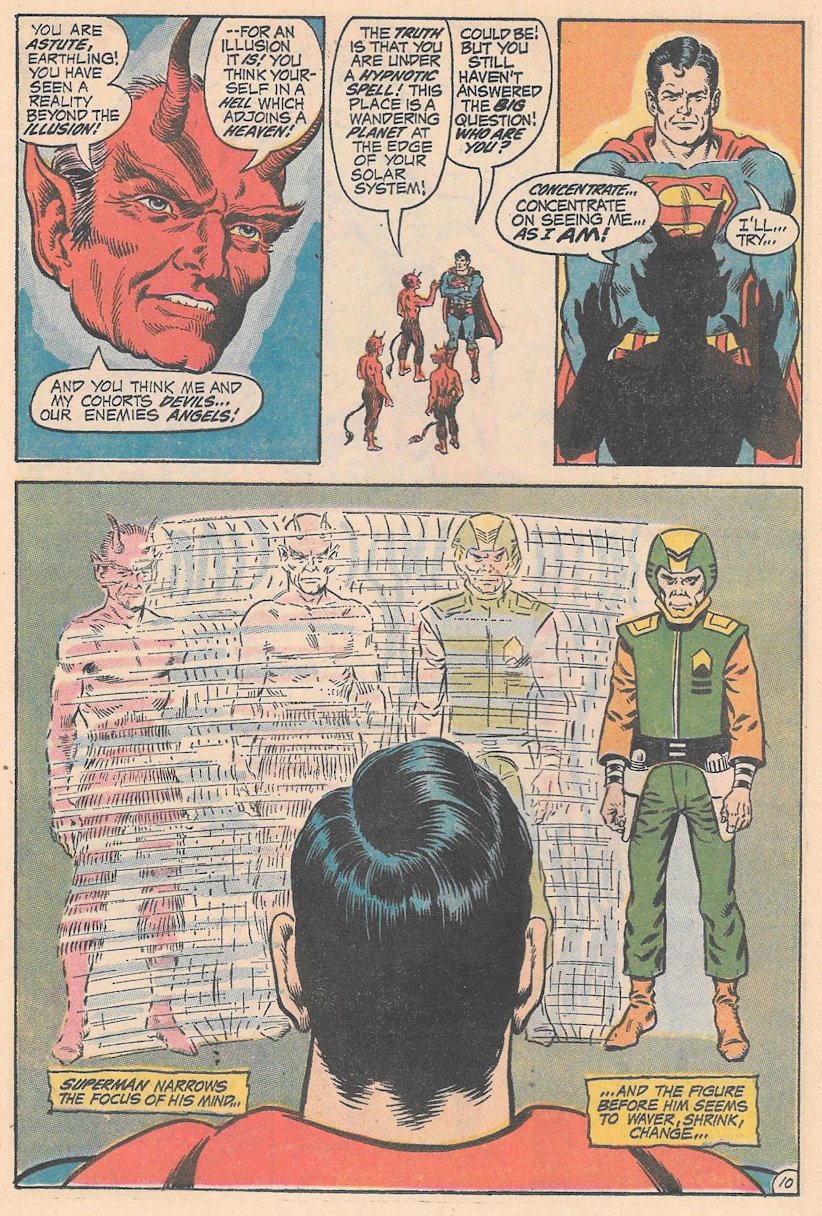 Superman has heard enough, he takes off to confront these criminals, only to find the “angels” holding actual swords over the heads of his friends. Supes is wise to them now, though. This is all bullshit and mirrors, and he ignores it, going straight for one of the angels. 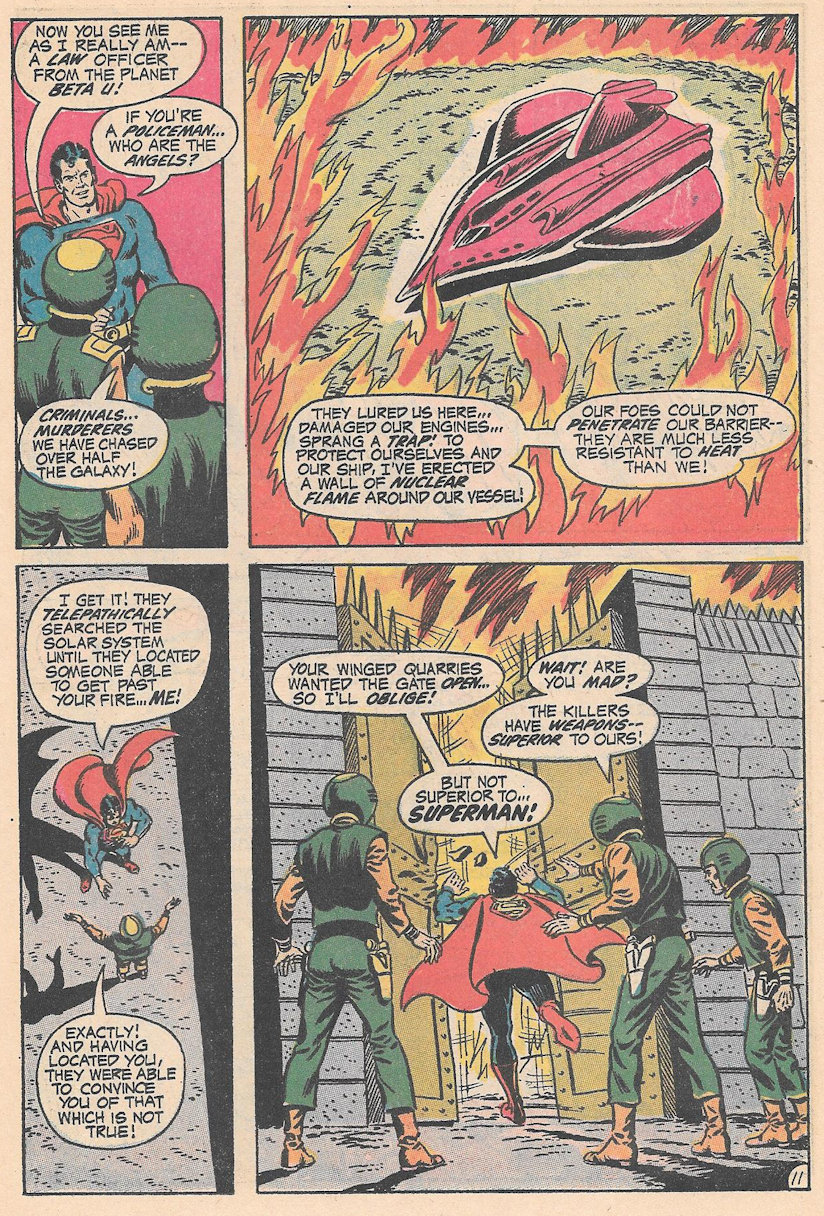 And here we have a couple of panels of Supes kicking angel’s butts, which is way more satisfying than it should be. However, the Gabriel angel is about to get revenge on the man of steel by destroying life on Earth with a bomb of some kind…and he space warps there…and wait, wait, WAIT book! 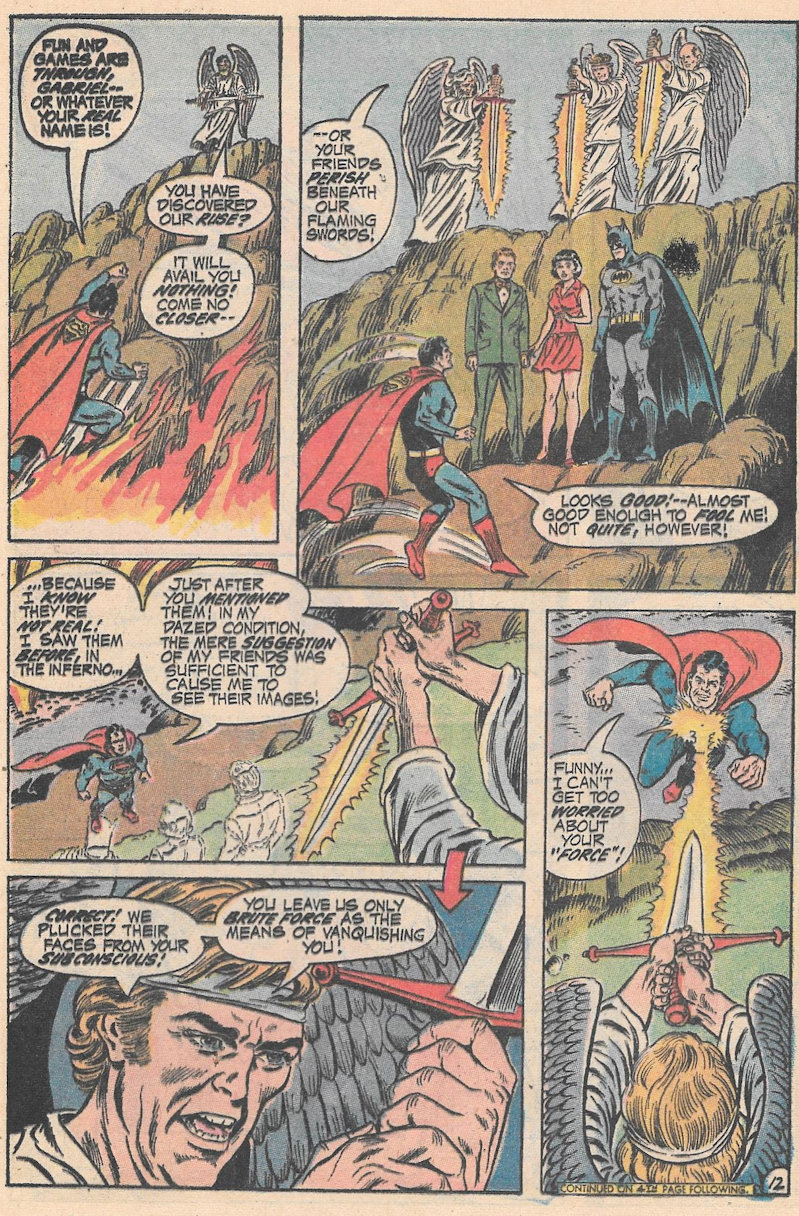 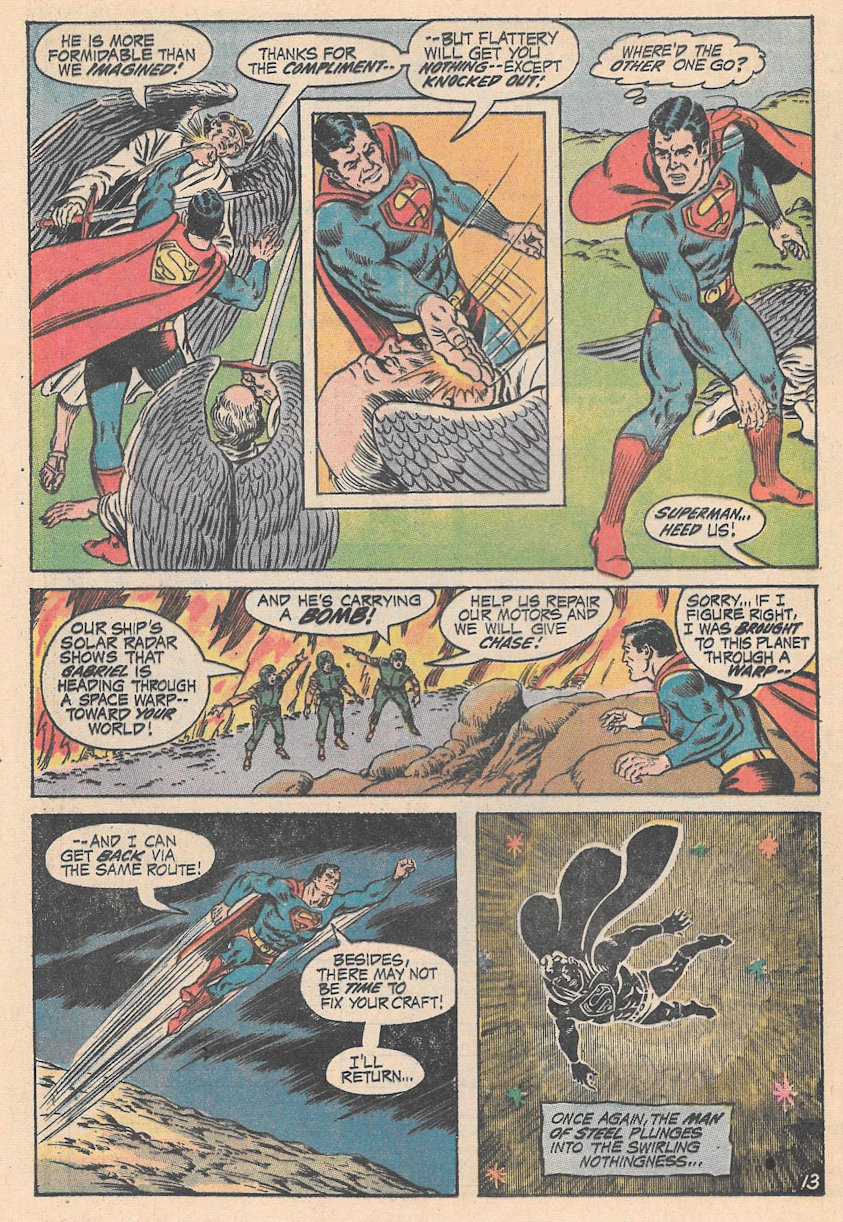 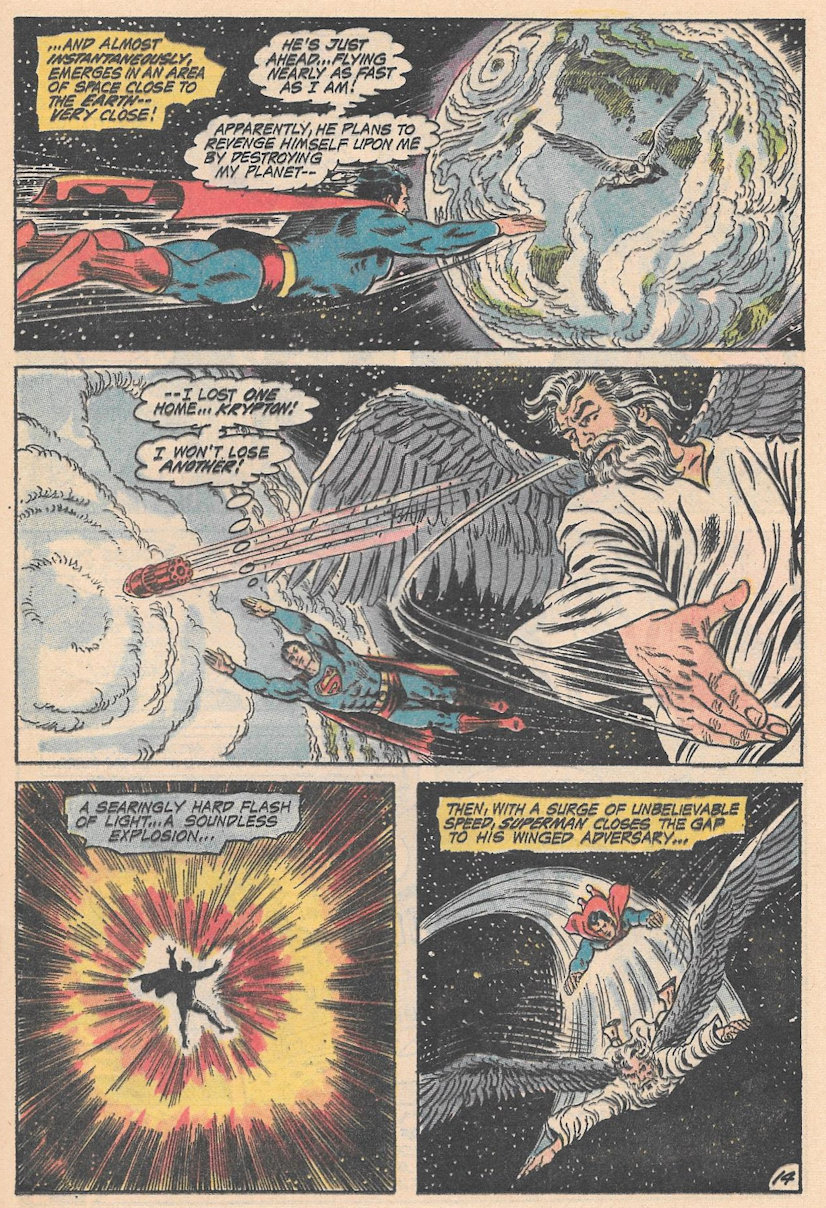 Yeah, Superman saves Earth…but if the angel could warp TO EARTH couldn’t they other angels have just left anytime they wanted? Why did they need the ship? How does this make any sense? 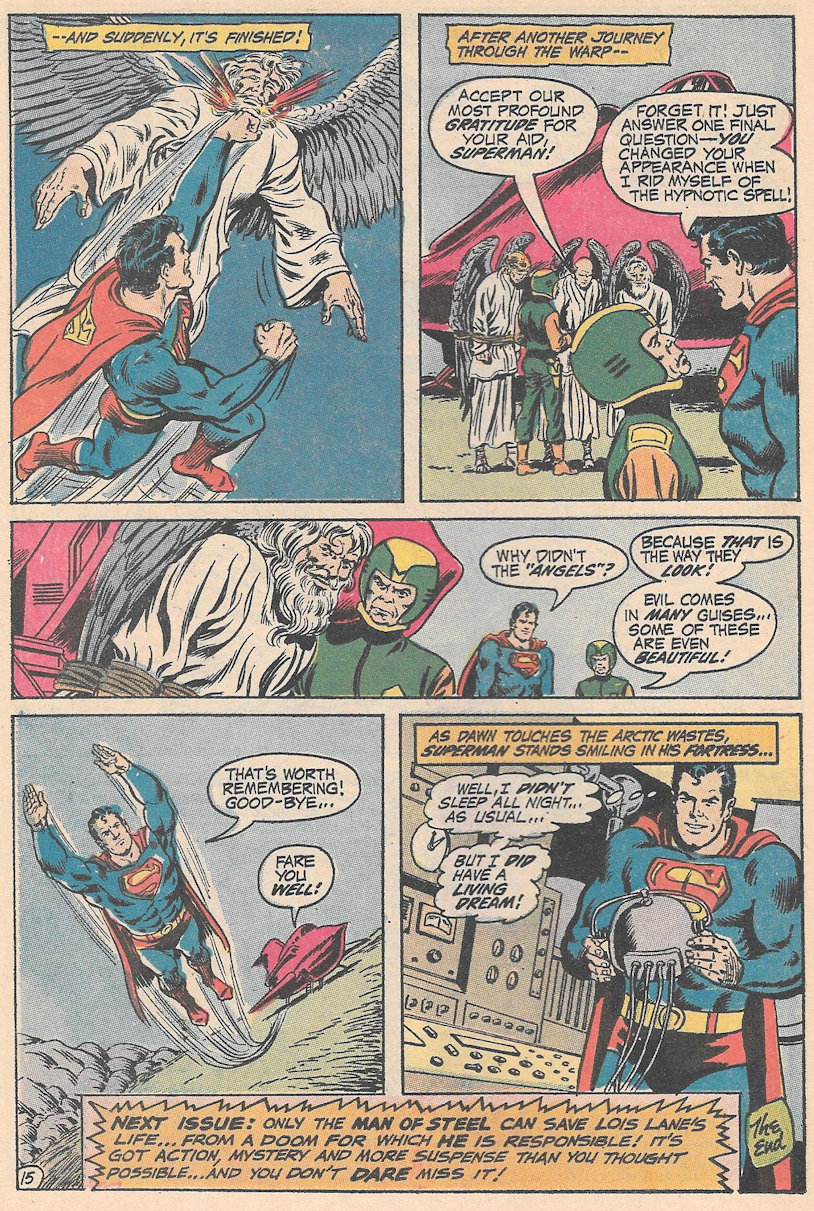 Bah! It’s silver-age. Just go with it, I suppose. Especially when you get scenes of Superman chasing angels and then punching them on the chin.

Until our next meeting, sliver-age Supes! I just hope I can avoid buying yet a third copy of this book.

Posted by SonOfCthulhu at 8:20 AM