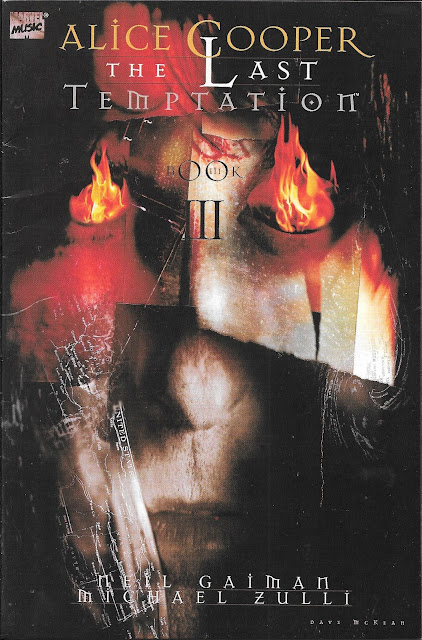 Alice Cooper is the de-Bill!

I was introduced to Alice Cooper by my “Superstars of the ‘70’s” four album set. The song anthology was like a "K-Tel best of"…collection and Cooper’s Schools Out was one of the highlights. Also the same set introduced me to Whole Lotta Love, which I still think of as the quintessential Led Zepplin song OVER Stairway to Heaven, if that gives you an idea of how influential the set was to me.

But whereas Zepplin was a group I would collect all their albums as I grew up, Cooper wasn’t somehow.

Maybe it was the showmanship that made me believe he wasn’t a serious performer. All that white face-paint and makeup felt more like he was trying to be a spectacle and not a muscian. What can I say? I was a strange kid. I judged things with a weird eye.

Cooper is, of course, a great singer/songwriter and I’ve had years to re-evaluate my early dismissal.

As for folks who apparently got Cooper on the first go round, one was super-dark fairy tale scribe Neil Gaiman. What I’m holding in my hands here is the third and final issue of The Last Temptation, a collaboration between these two showmen, drawn up with amazing style by little-used Michael Zulli. Zulli had teamed with Gaiman before on Sandman and HE is the guy that drew the unused Rick Veitch penned issue of Swamp Thing #88 where the muck monster meets Jesus Christ. Maybe someday we will see that one.

The Last Temptation was also Alice Cooper’s 13th studio album, released in conjunction with this book. The record is a rock opera concept album centering around a boy named Steven and a mysterious showman tempting the lad into joining his supernatural traveling show. Sadly, the comic was about all the exposure the album received as Epic Records didn’t finance a tour. The book was originally published under the “Marvel Music” imprint but was subsequently reprint in trade by Dark Horse Comics.

In the comics the mysterious showman is played by Zulli doing a really good Alice Cooper, but you can kind of tell he’s also the devil and he is trucking in human souls in one way or another. It’s sad to come in to this so late and on the third beat of the story. We have a little idea of the stakes, but not a real feel for how they were shown. And if there is anything I miss, it’s getting to read a really good story of the type Gaiman always provides in total.

But the Crapbox is what it is and this is what we’ve got. It is appropriately the night of Halloween and as the kids get ready for tricks and treats, our protagonist Steve has chosen to dress up like a young Cooper. 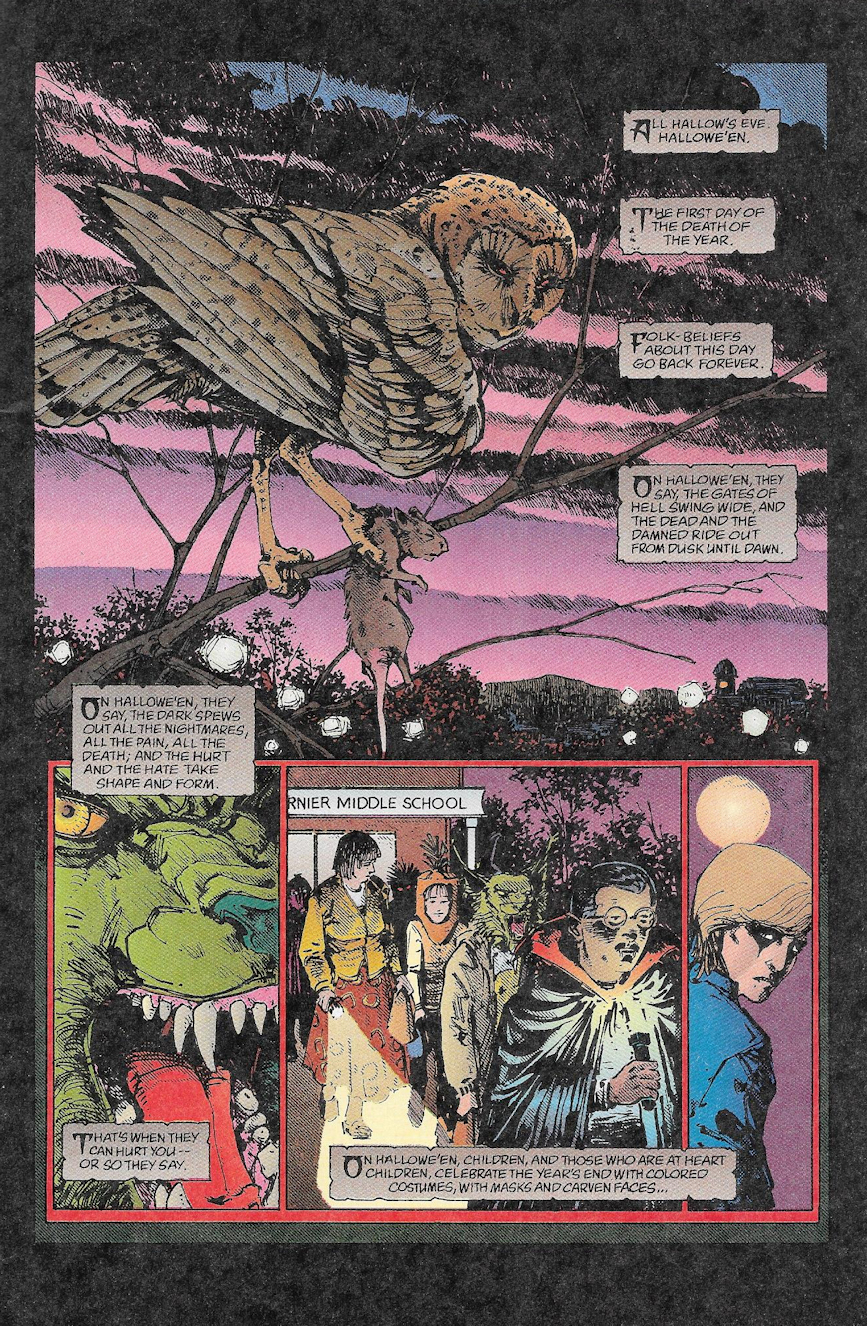 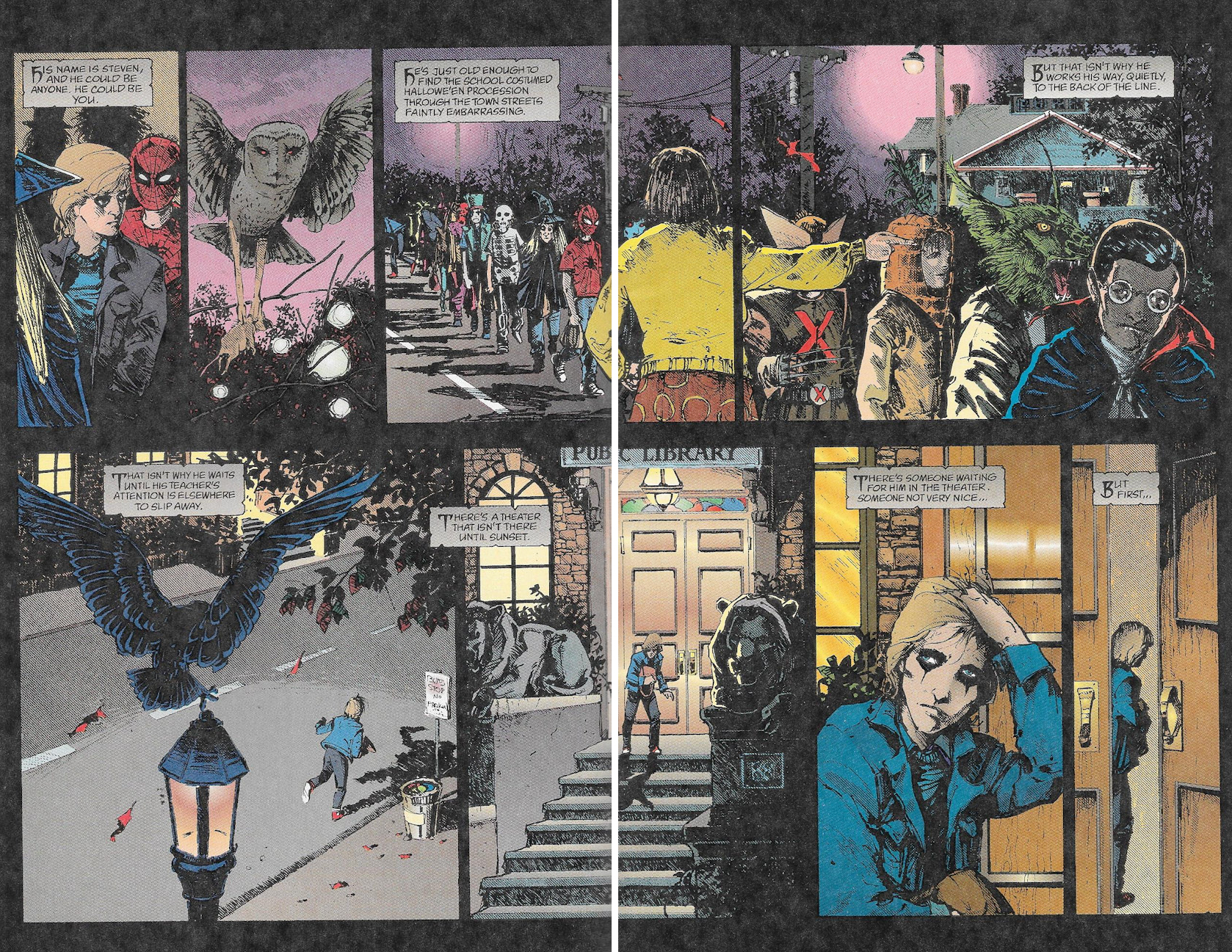 Appears he’s made his choice to join the traveling show of the damned, but he makes a fateful stop at the local library… 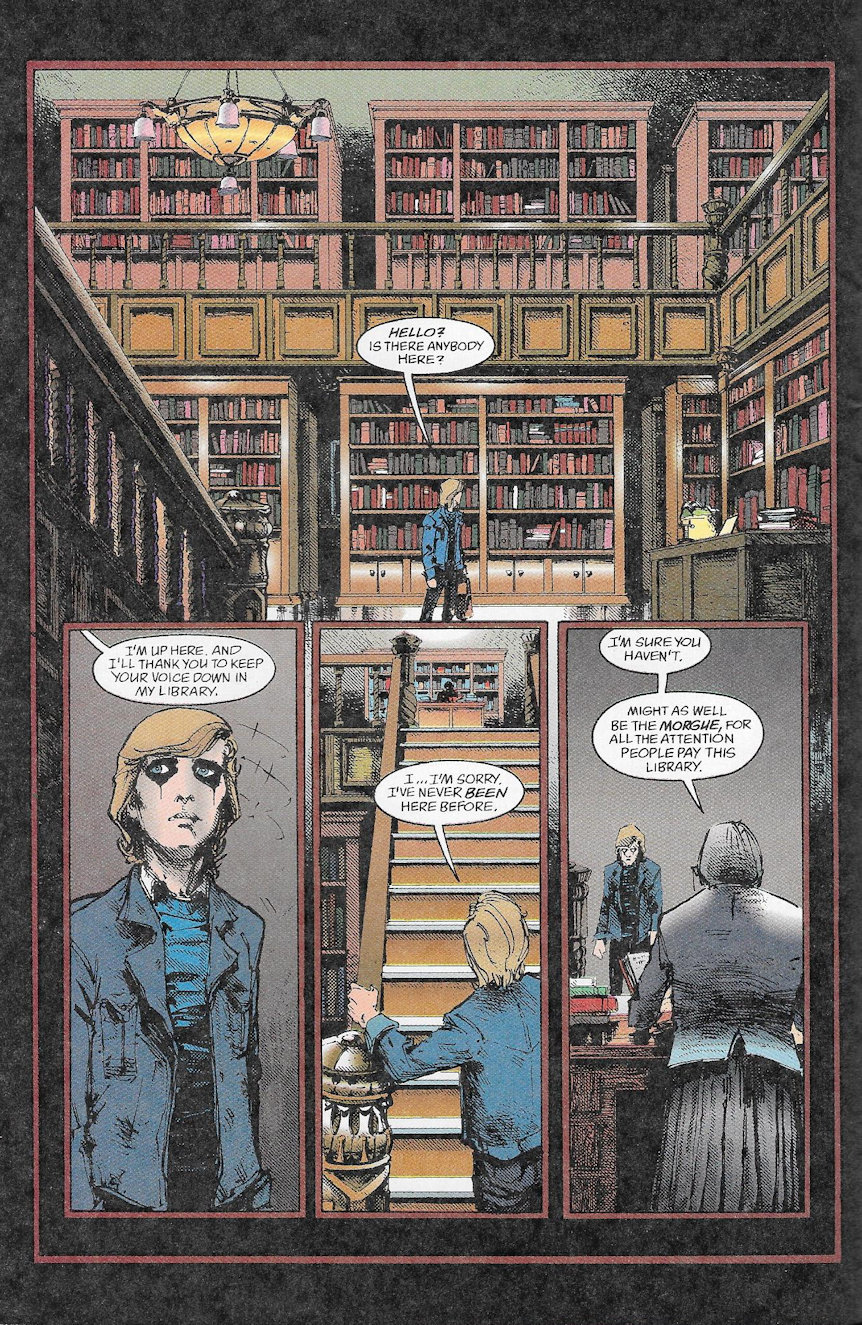 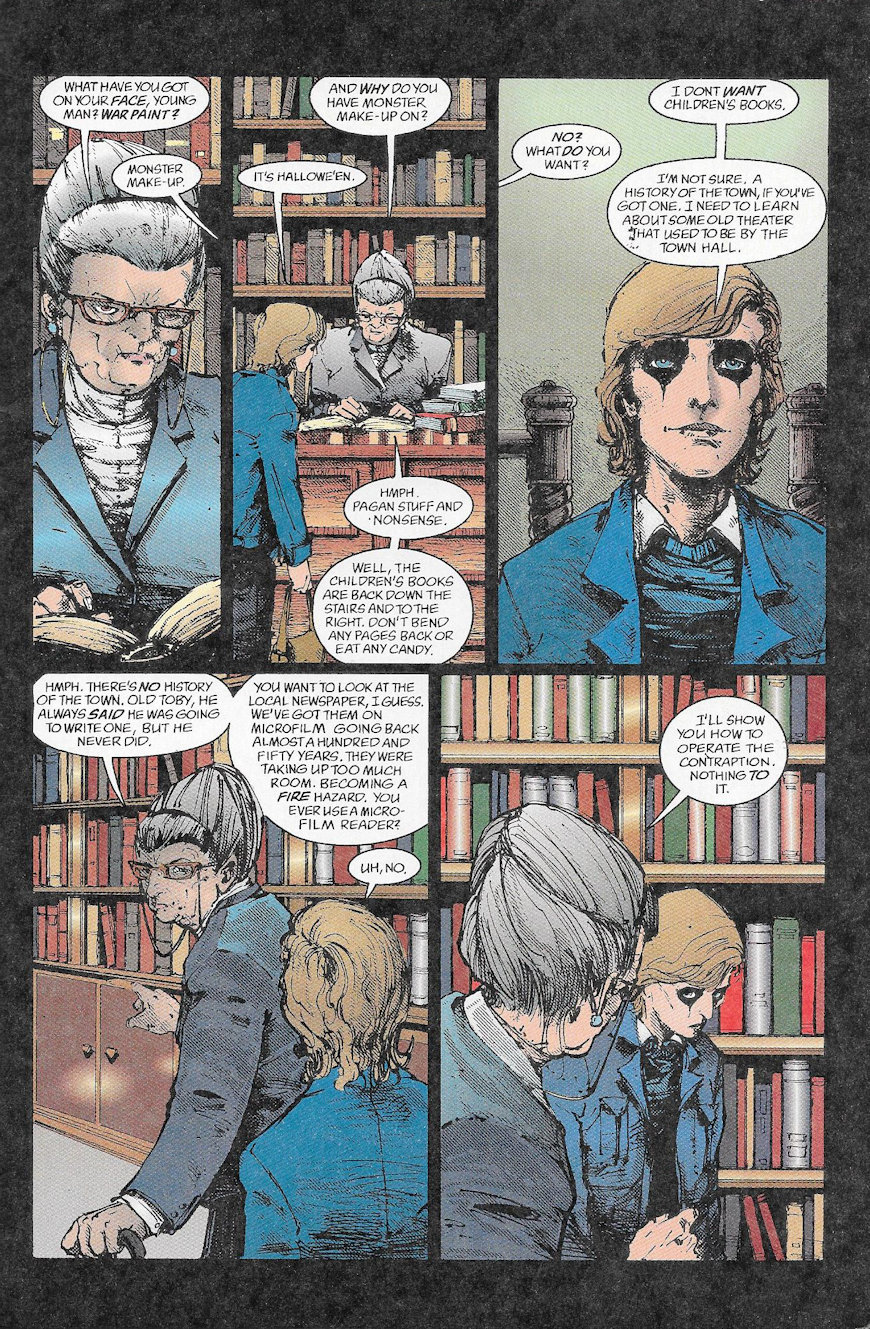 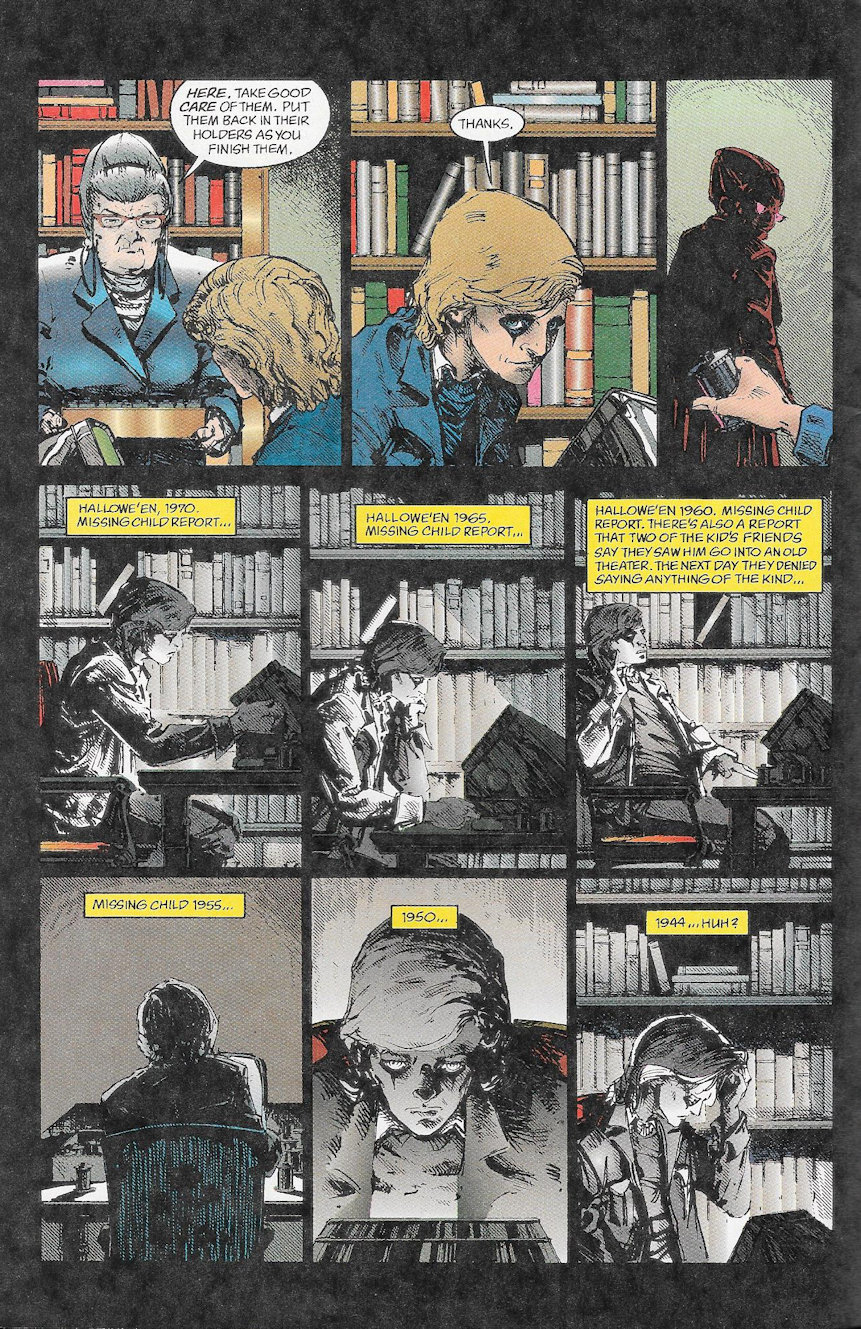 …and while perusing the microfiche, Steve notices a trail of child disappearances that date back to the 1880’s, including one where the town theater burned down with the kids in it. 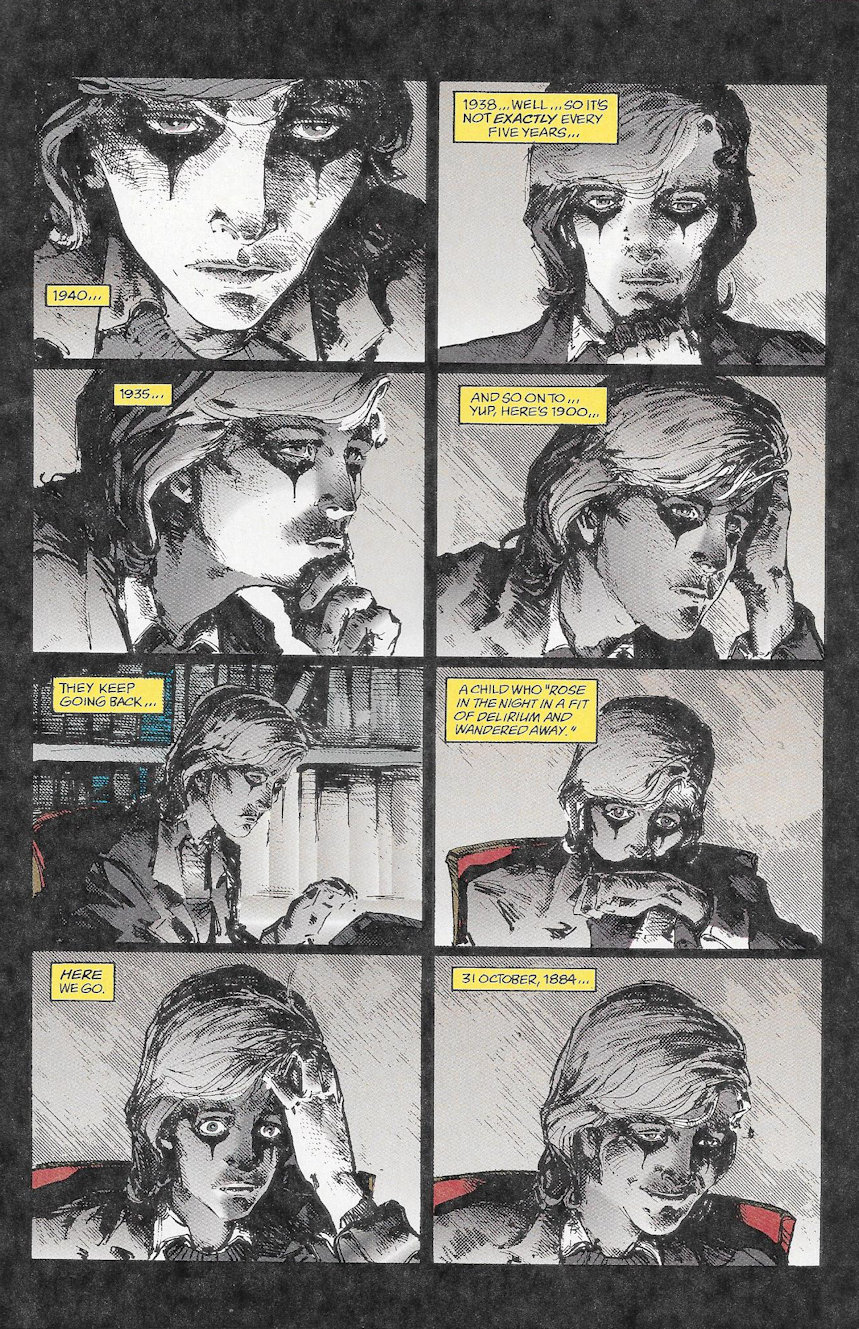 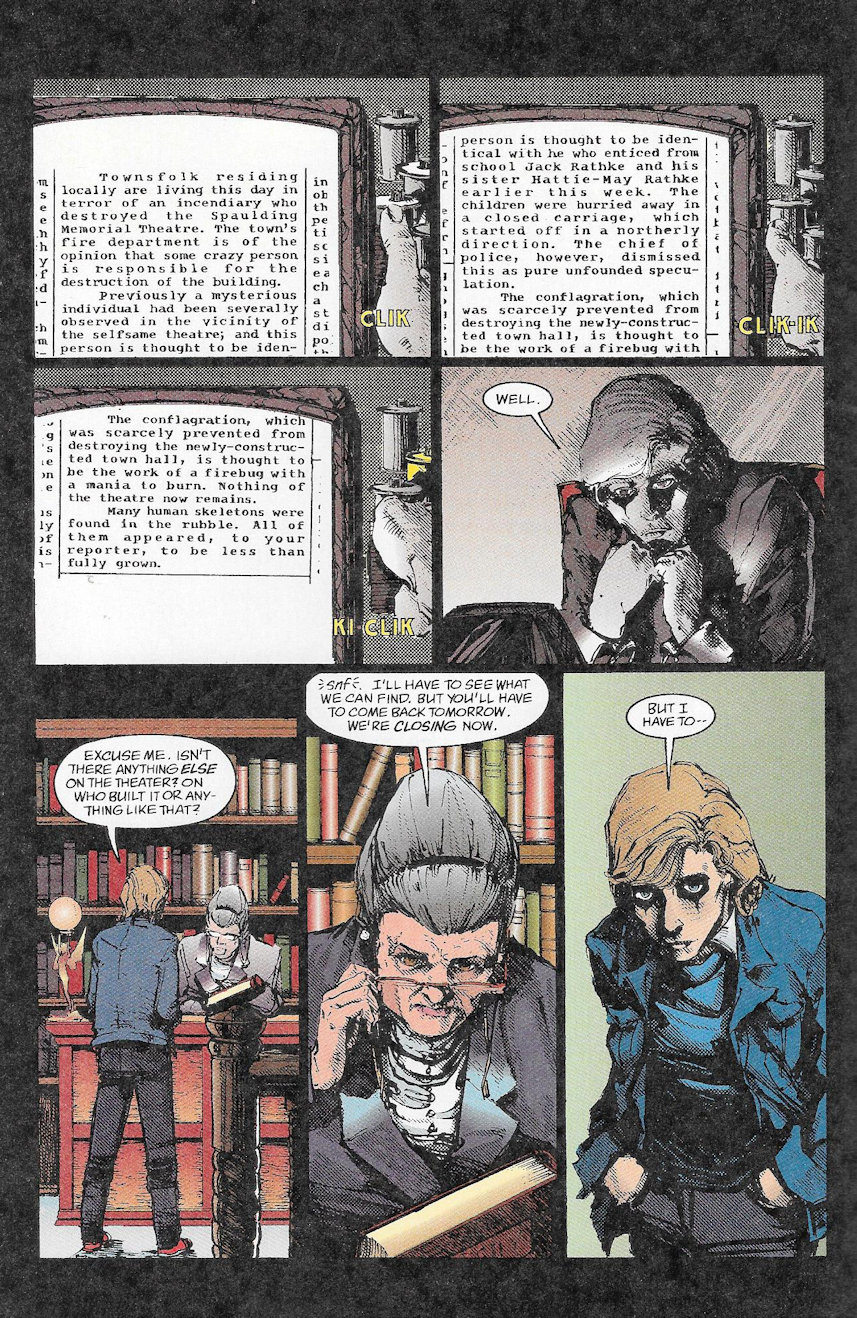 Unfortunately, he’s run out of time. The Library is closing and he has a decision to make. There is something about the book the librarian is reading too, but I’d probably need parts 1 and 2 of this story to figure that out. 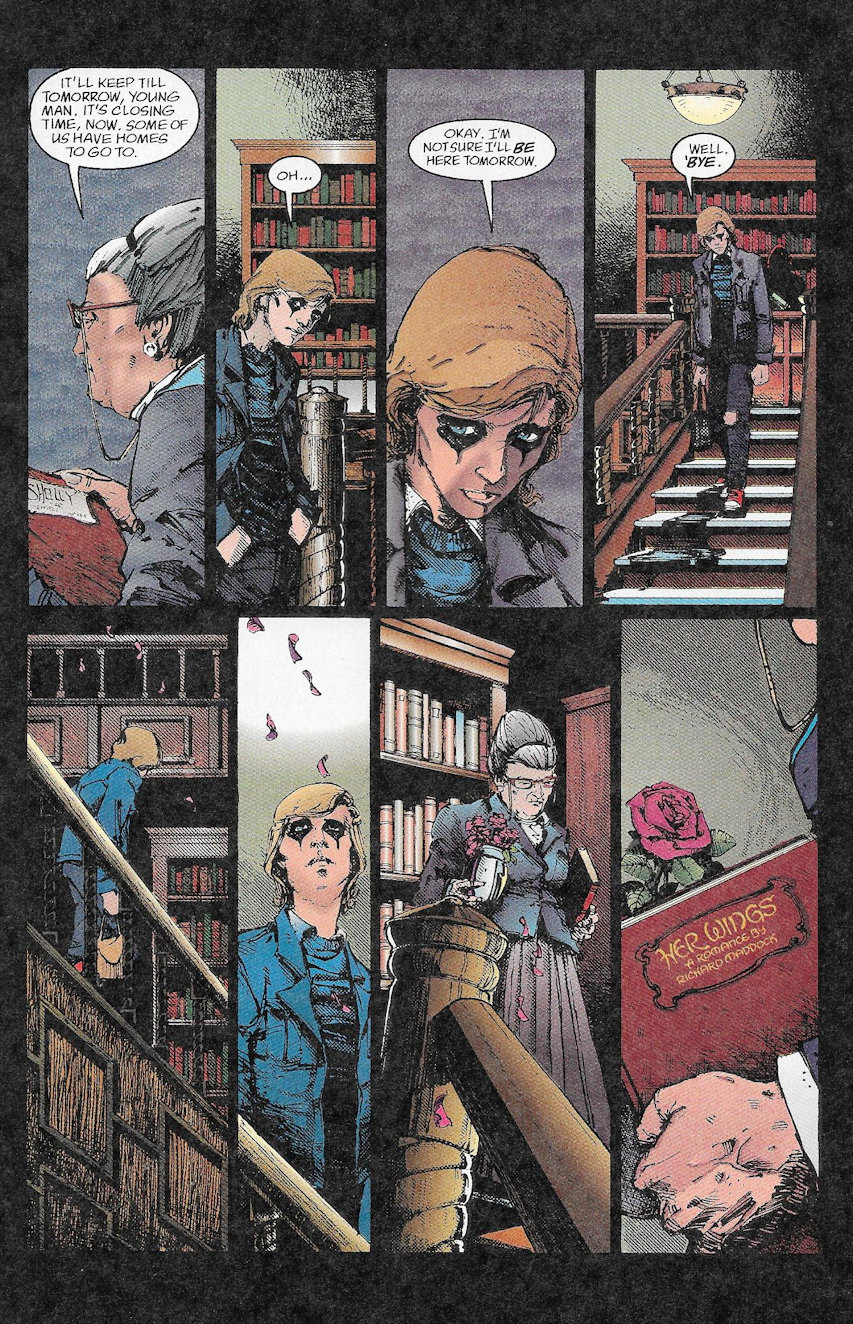 Steven heads back to the theater, but his way is barred by these creepy undead looking dudes. Unsure of these guys are cadavers come back to life or just his town has a lot of meth addicts. 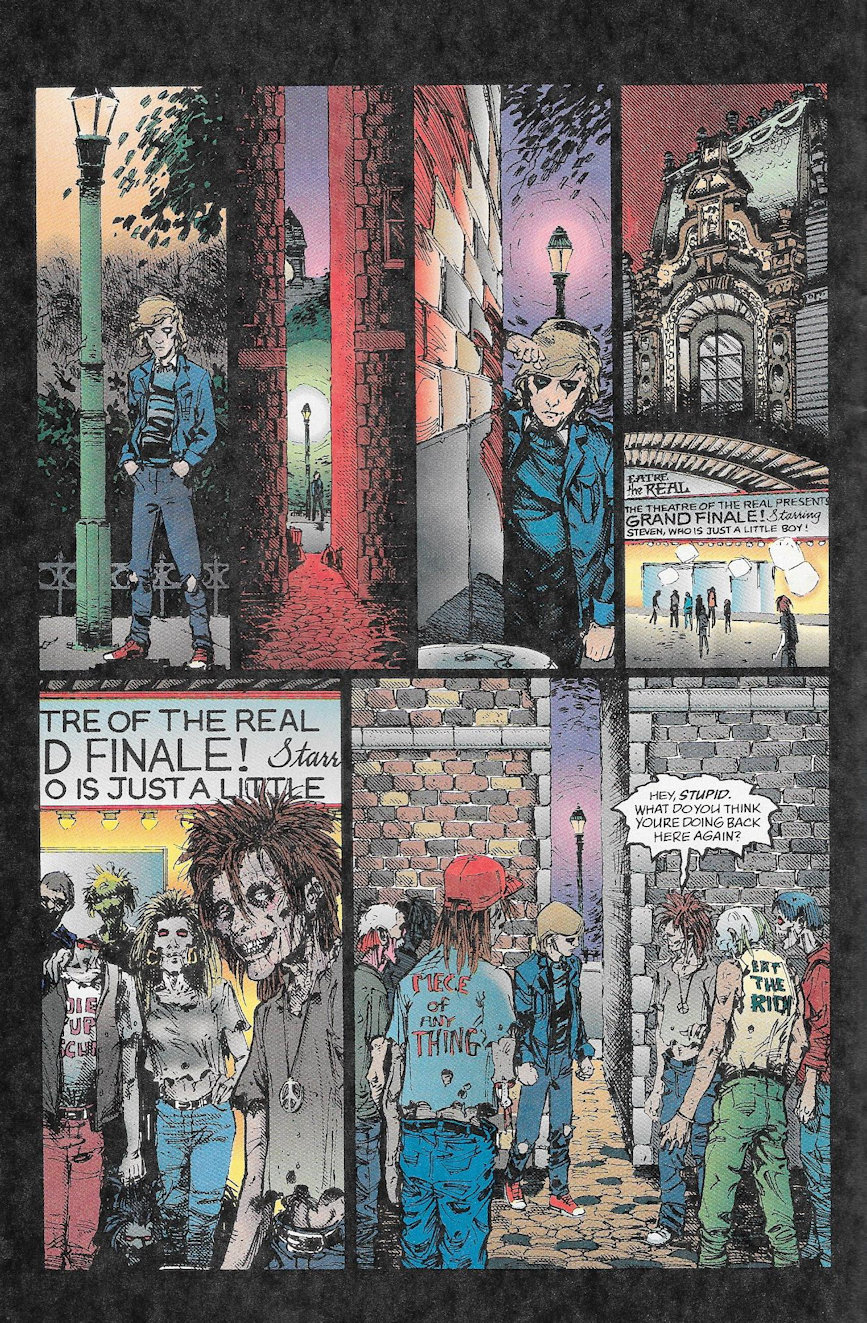 Either way they are scared off by his flashlight and Steve makes his way through a stage door…that appears to lead directly onstage.

His light is taken from him and presented to the showman by one of his demon underlings and destroyed. All the while, our Alice Cooper is trying to force Steve to sign up with him on a deal with no actual terms as yet. Steve does get immortality. And freedom from fear. But what he loses…. 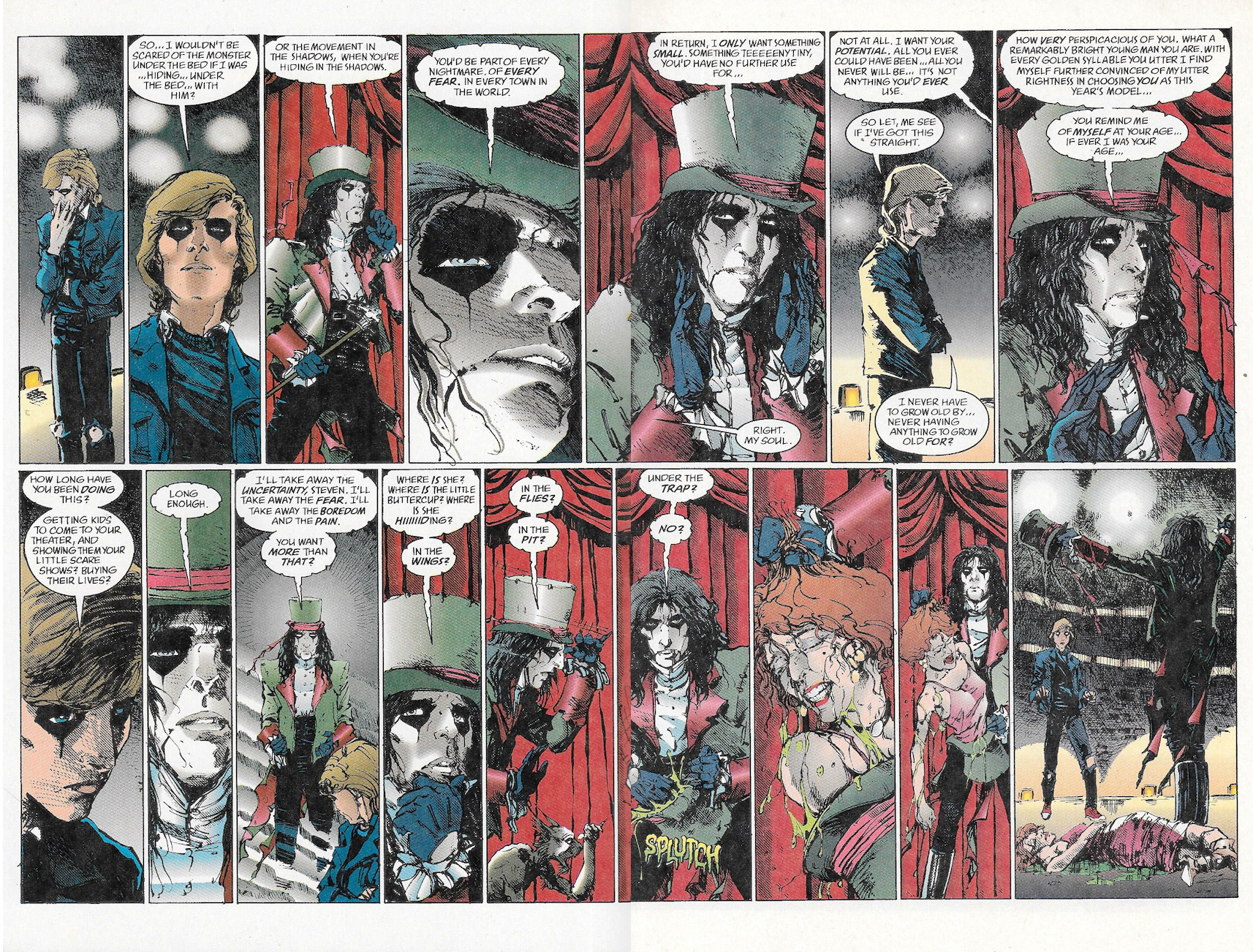 …is Steve’s potential. All the things he would bring to the world. This feels very on brand as this pretty much was what Satan offered Jesus in the desert so many years ago (mythically of course). And not only that, the Devil offers him a woman that Steve might love. 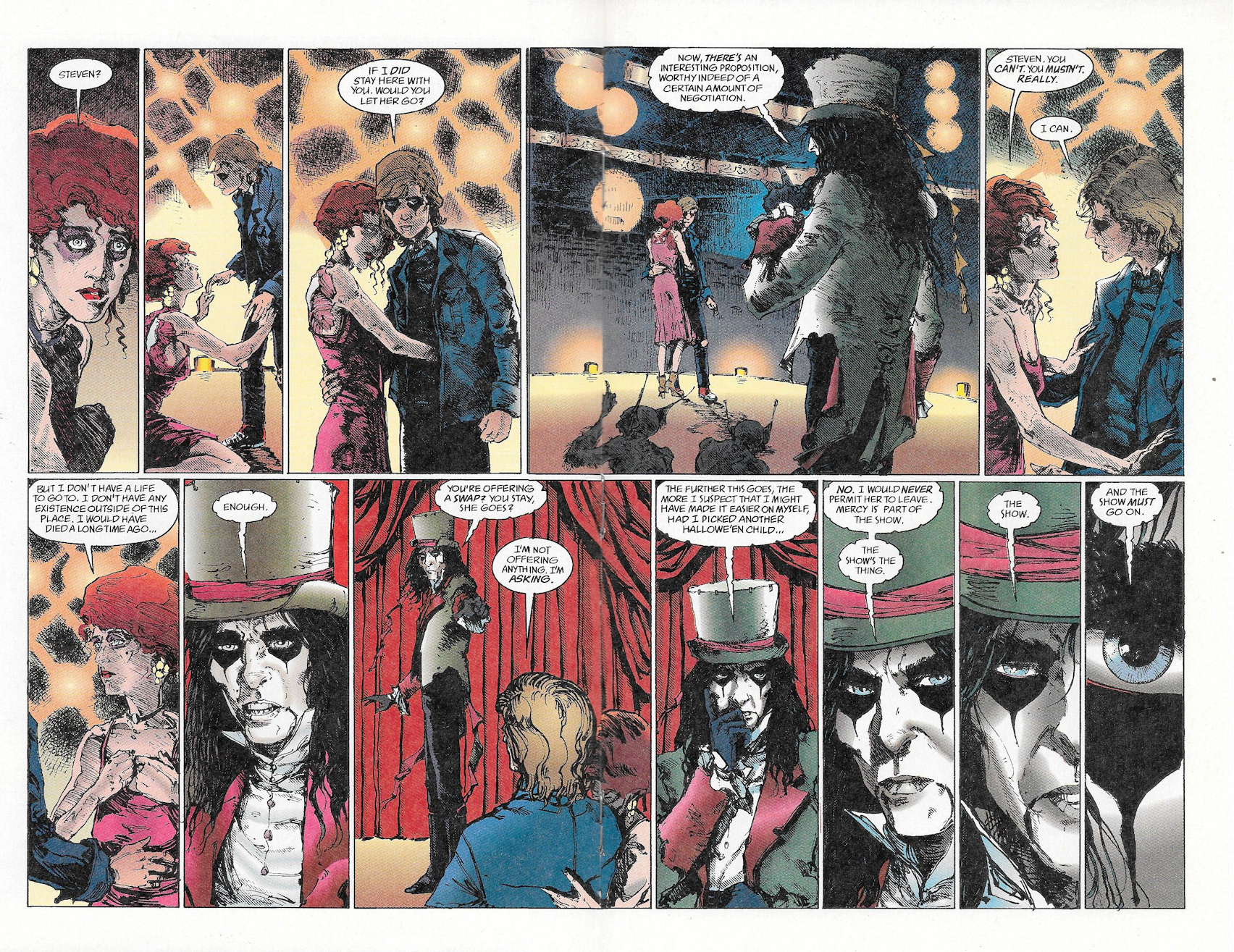 And Steve is willing to swap his life for hers…but Mercy has no life to go to and the Showman will not allow her to leave. 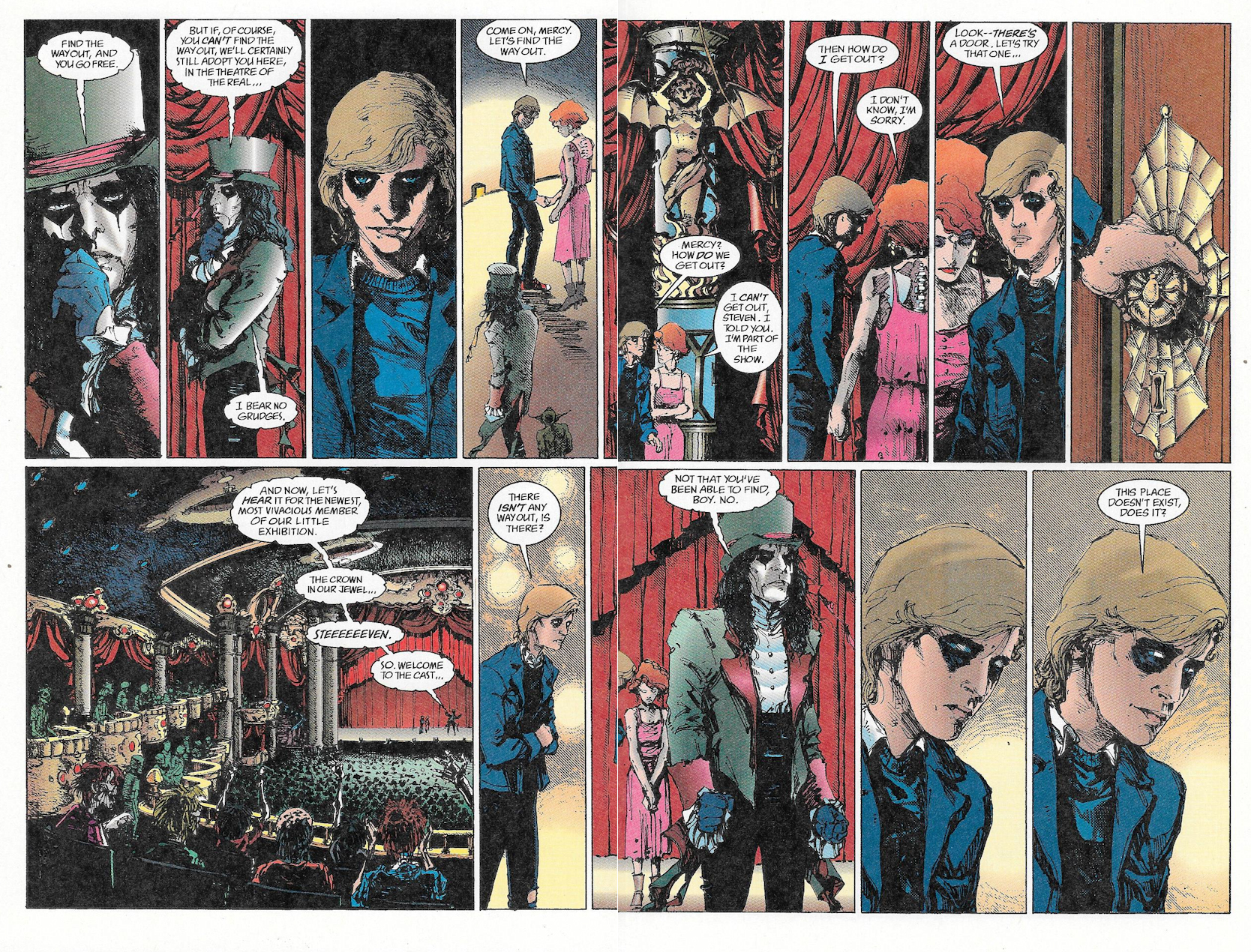 With that, Steve makes his choice. And it is a hard pass…Alice makes a big sarcastic deal that it isn’t any big thing being turned down…. 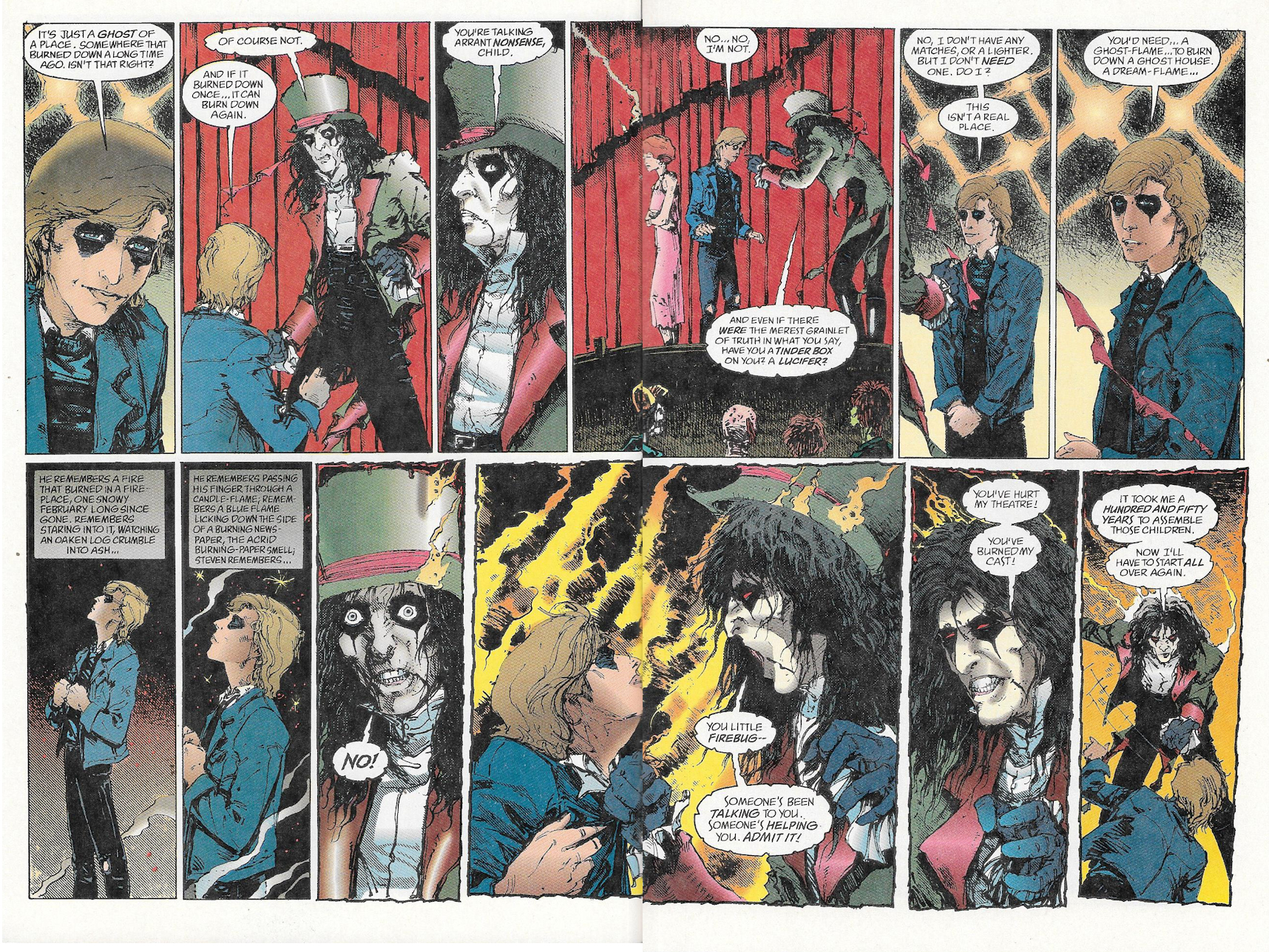 …but we know it kind of is. The Devil is always a poor loser. Steven is left to find his own way out, which ends up with him on stage…and that’s where Steve decides to tear it all down around the Devil as he leaves.

And with that, Steven conjures up the fire that took the original theater down and ends up getting right under the Showman’s skin. (metaphorically speaking) Thus, Cooper goes all python-y, getting the Snake in the garden myth. 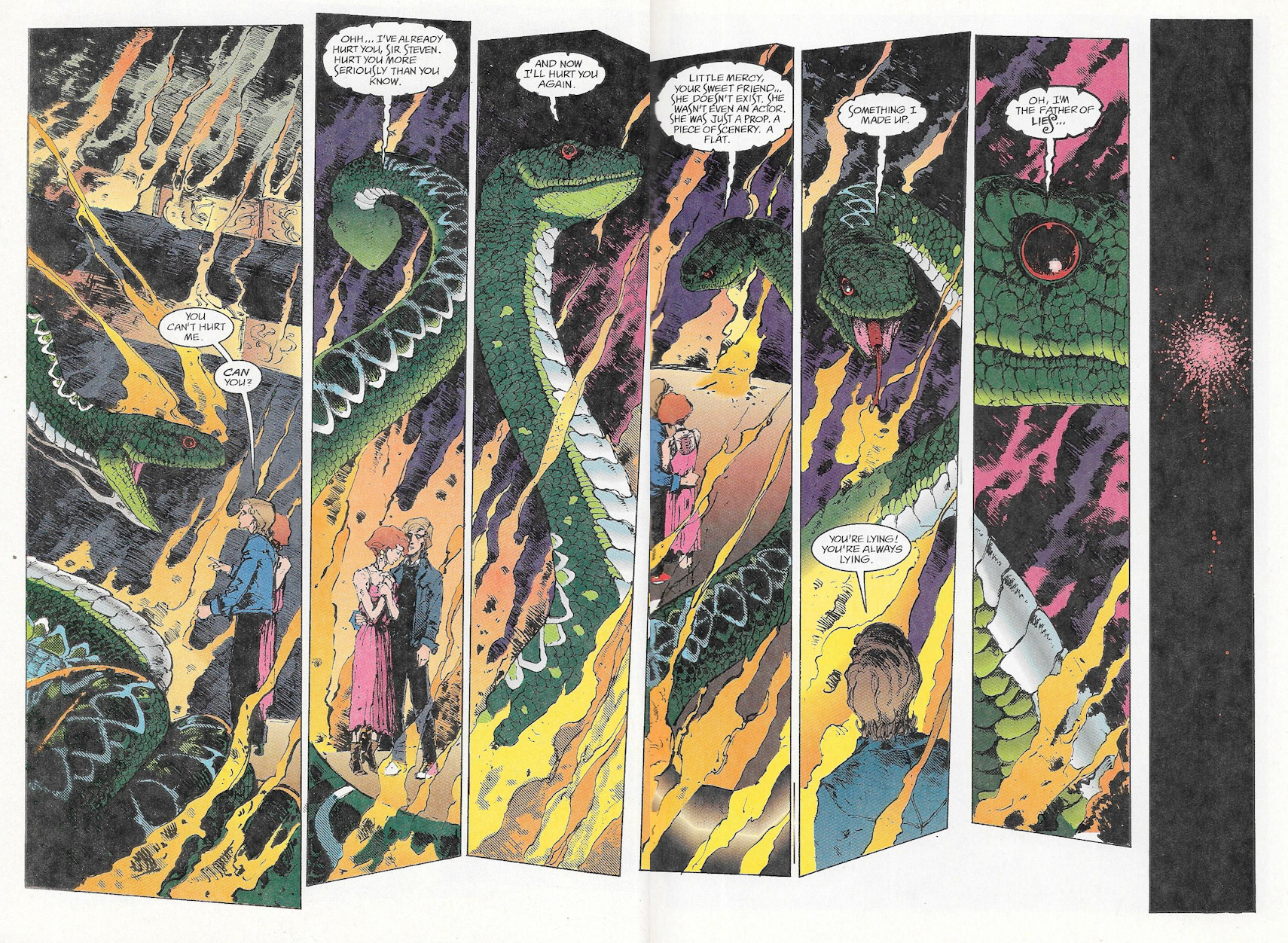 And as he admits to being the father of lies, he also tries to persuade Steven that Mercy isn’t real either.

With everything gone though, Mercy’s spirit remains. And Steven starts to say goodbye as she calls him brave. He says he wasn’t but that the showman almost had him doubting for a moment about Mercy not be a ghost. Being just a prop.

Mercy then cries and claims that’s all she was, turning into a twisted cane. It’s this part that resonates even if we don’t know the whole tale. Mercy clearly loved Steven and knew she couldn’t be with him. She certainly was a ghost from a prior age. But she know Steve had his whole life ahead of himself and loving a person long dead would hold him back from that. Thus she claims to be unreal to let him go. It is one of those emotional moments that stings so hard and only Gaiman can stick these kinds of landings quite this way.

Steven takes off his makeup and moves on with his life… 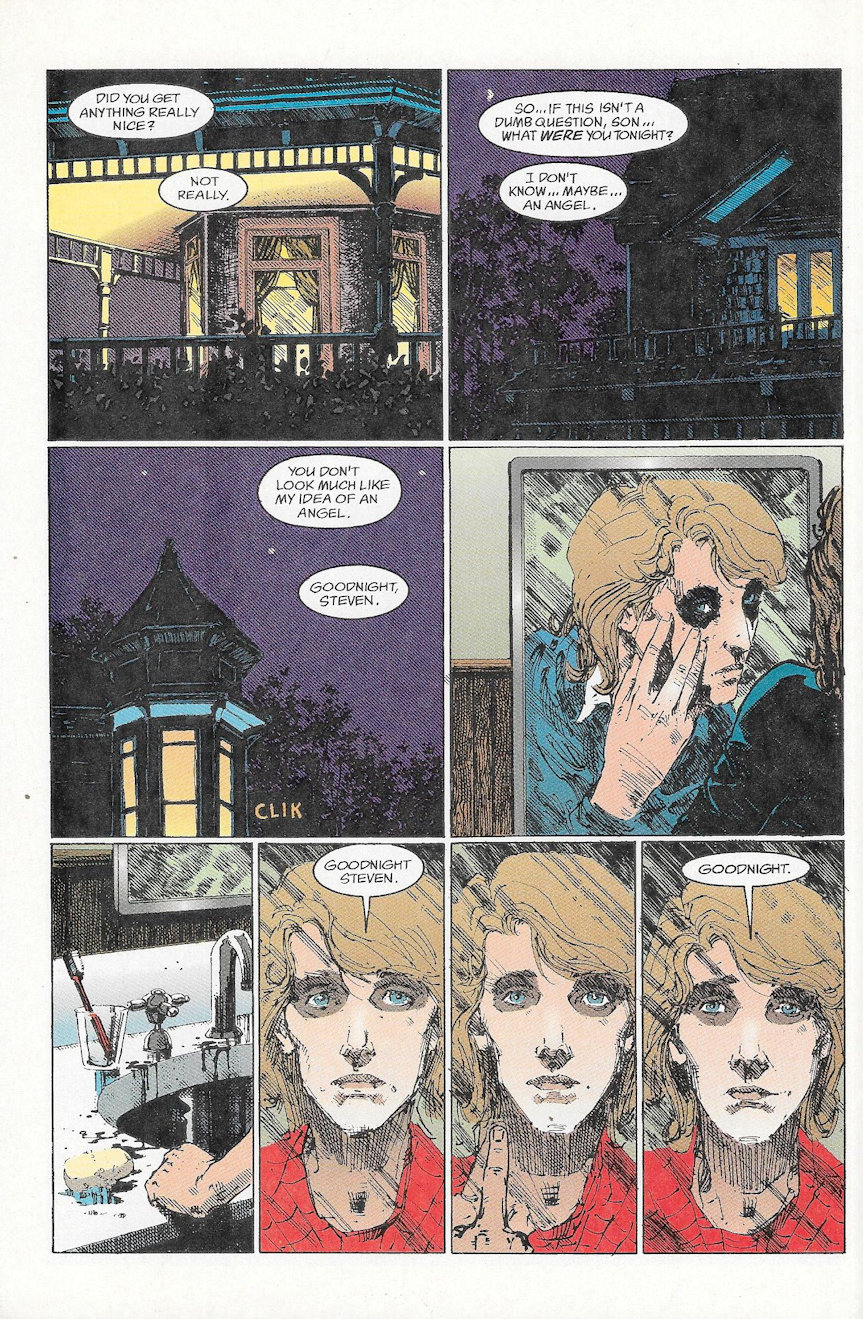 …but it is Cooper who steps in to have the last word. 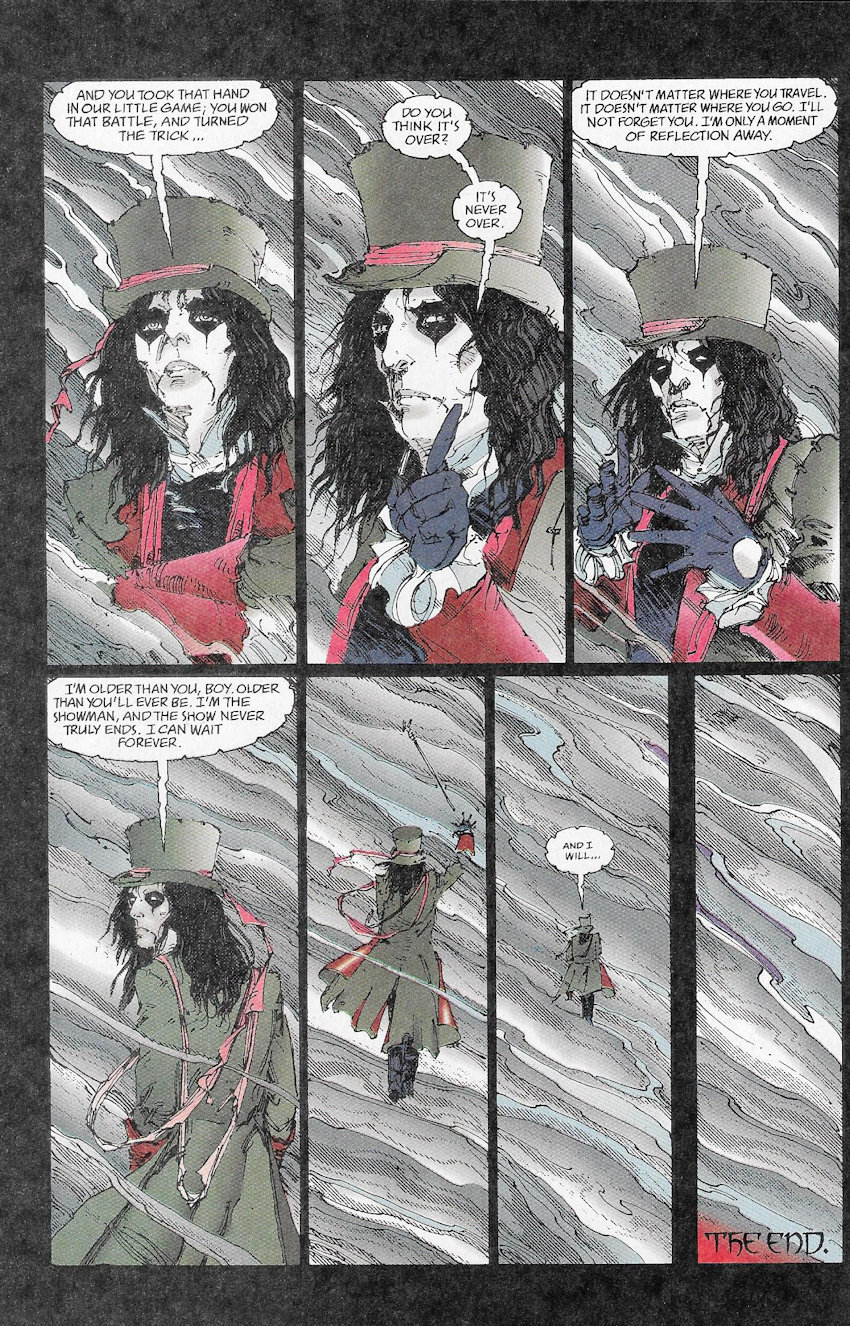 But his promise to revenge himself on Steve rings hollow. He is lost in fog and he is best forgotten.

Sadly, it appears this series was forgotten too. Cooper’s record didn’t make an impact, even though reviewers called it some of his best work. I don’t find charting information for it, which is surprising. Even collaborations with Chris Cornell of Soundgarden, Dan Wexler of Icon, and Derek Sherinian of Dream Theater didn’t move the needle on it.

But we did get this book and this finish packs a punch. Go find the rest and tell me what you think.

Posted by SonOfCthulhu at 7:28 AM