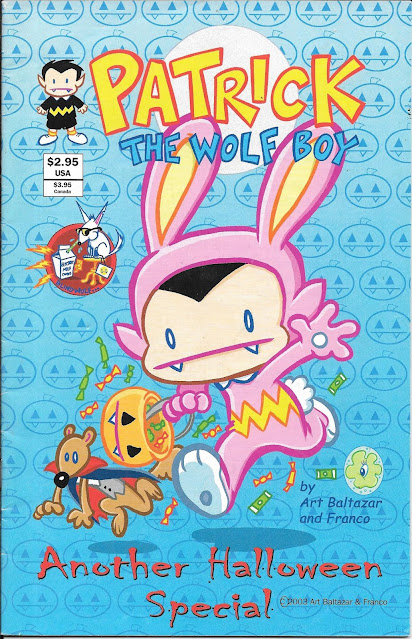 This isn’t for me

If I was going to pick up a book to get Art Baltazar’s comic stylings, this probably wasn’t it. Balthazar is the guy behind Itty Bitty Hellboy and the Eisner Awarded Tiny Titans. Those would have probably been better to get. Or even an issue of DC Super-Pets or Superman Family Adventures. Something where the fandom of it could soften the blow a bit.

Instead the Crapbox delivers Patrick the Wolf Boy and watches me twist in the wind.

Why? Because my grown-up sensibilities dislikes this magazine very much.

I find nothing in the books entire length that satisfies the need for paper or ink to be wasted on its creation. I found myself bored throughout. To me, at fifty-three years old, there is nothing to recommend this book.

However, if you asked an 8 or 9 year old SoC…that same kid who was completely less discerning with what he thought of Patrick, he would probably say he liked him. This was the same kid that re-read the Peanuts paperbacks from the library about 6 to 8 times each.

Take the first “joke”…a two-page strip where the school is having a student costume contest showing a few kids on page one…and then Patrick as a regular boy first…then transforming into a werewolf …and then everyone clapping…mystified me. I think it is the character design for Patrick the human and Patrick the Wolf Boy are too similar. Both have pointy teeth and the same shape. Only the shading on his hair changes. The subtly is too great in this instance for the joke to land. 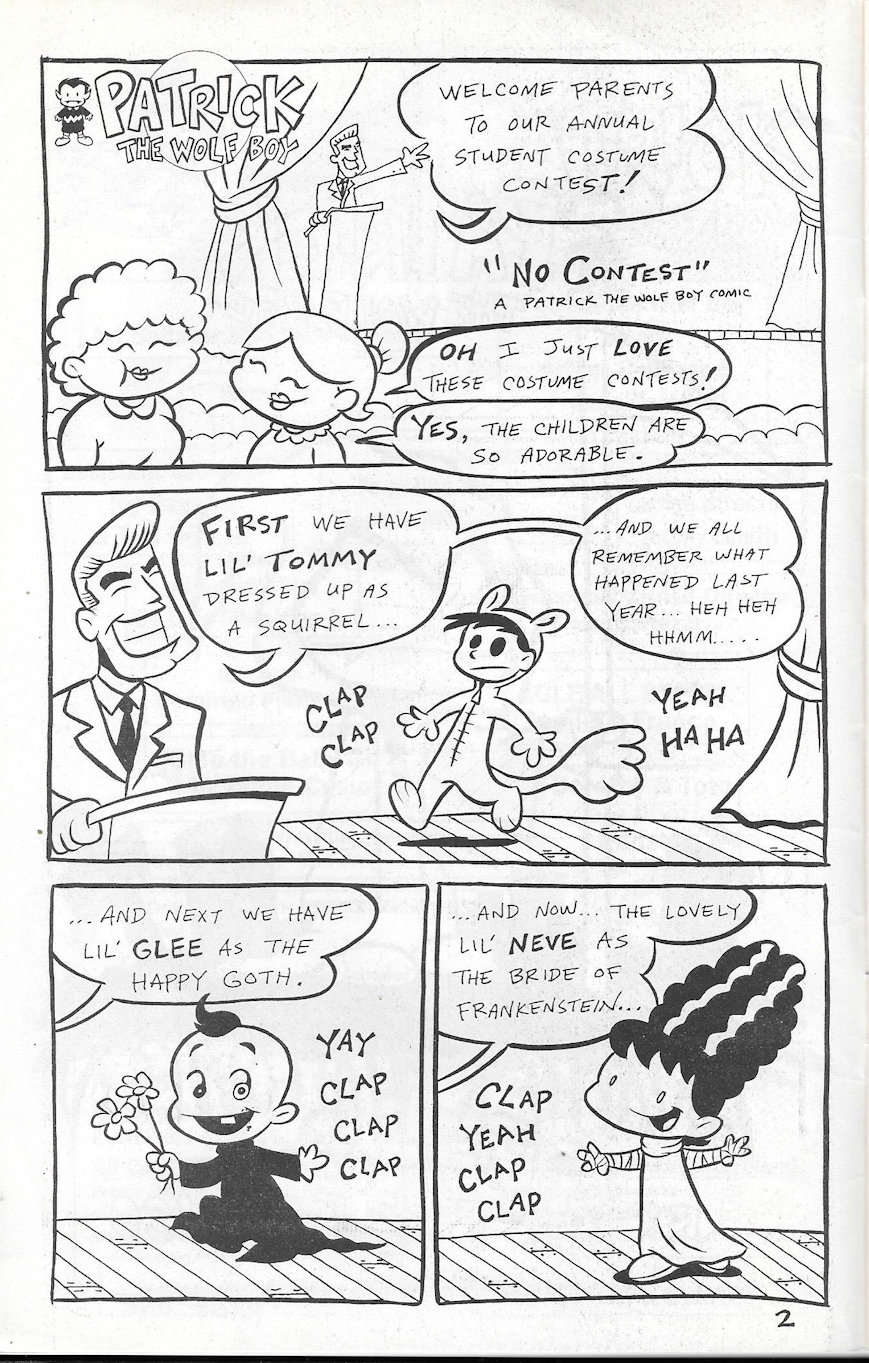 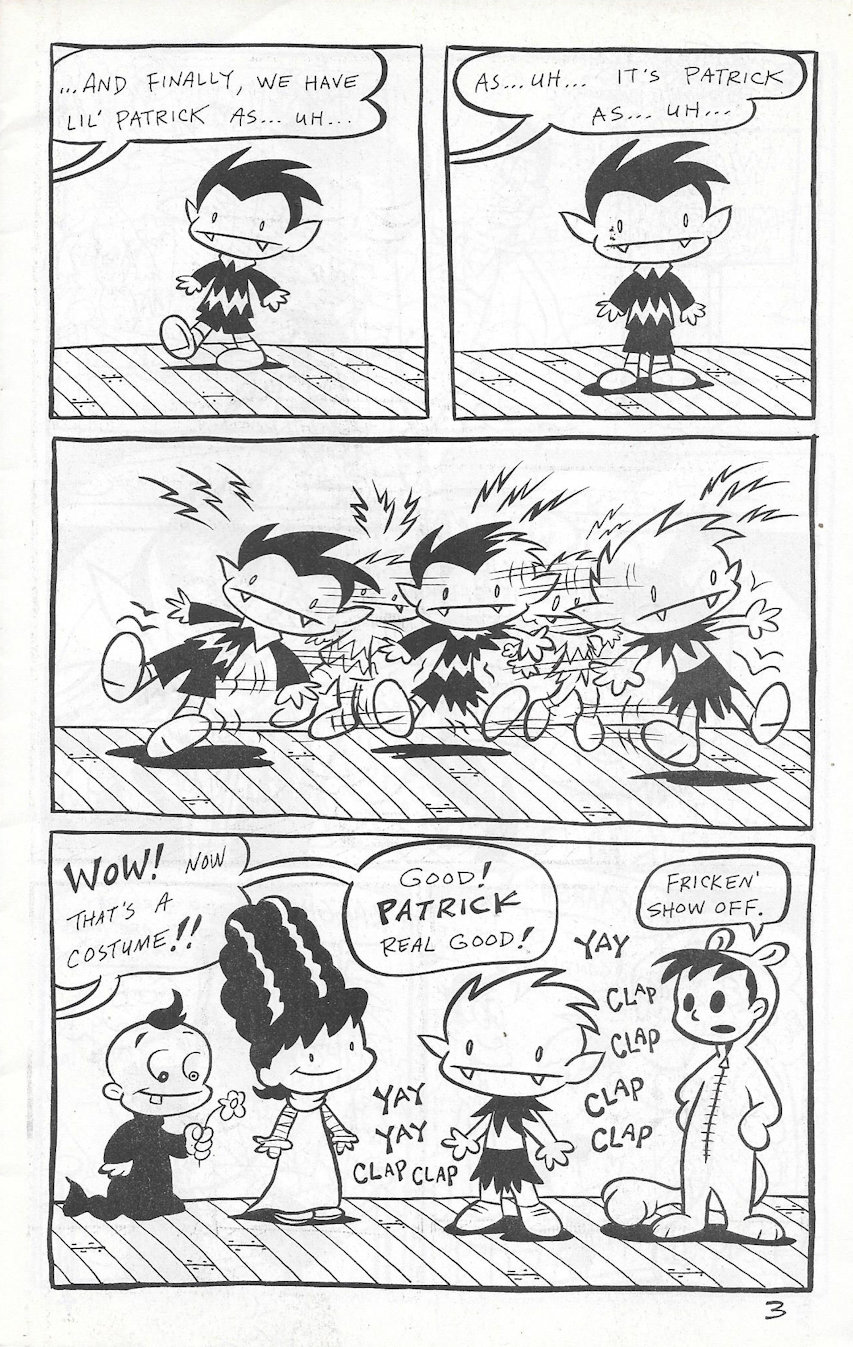 I’m on page three an I’m scratching my head at what I’m supposed to find funny.

I move on to the next one, where we spend three pages of Patrick in a wax museum for the joke to be “he thinks they are like candles so he climbs up and looks for a wick on their heads.” Which falls three panels from the final and the joke is under cut due to it. But also the lead in is far too long and we are bored well before the punchline. 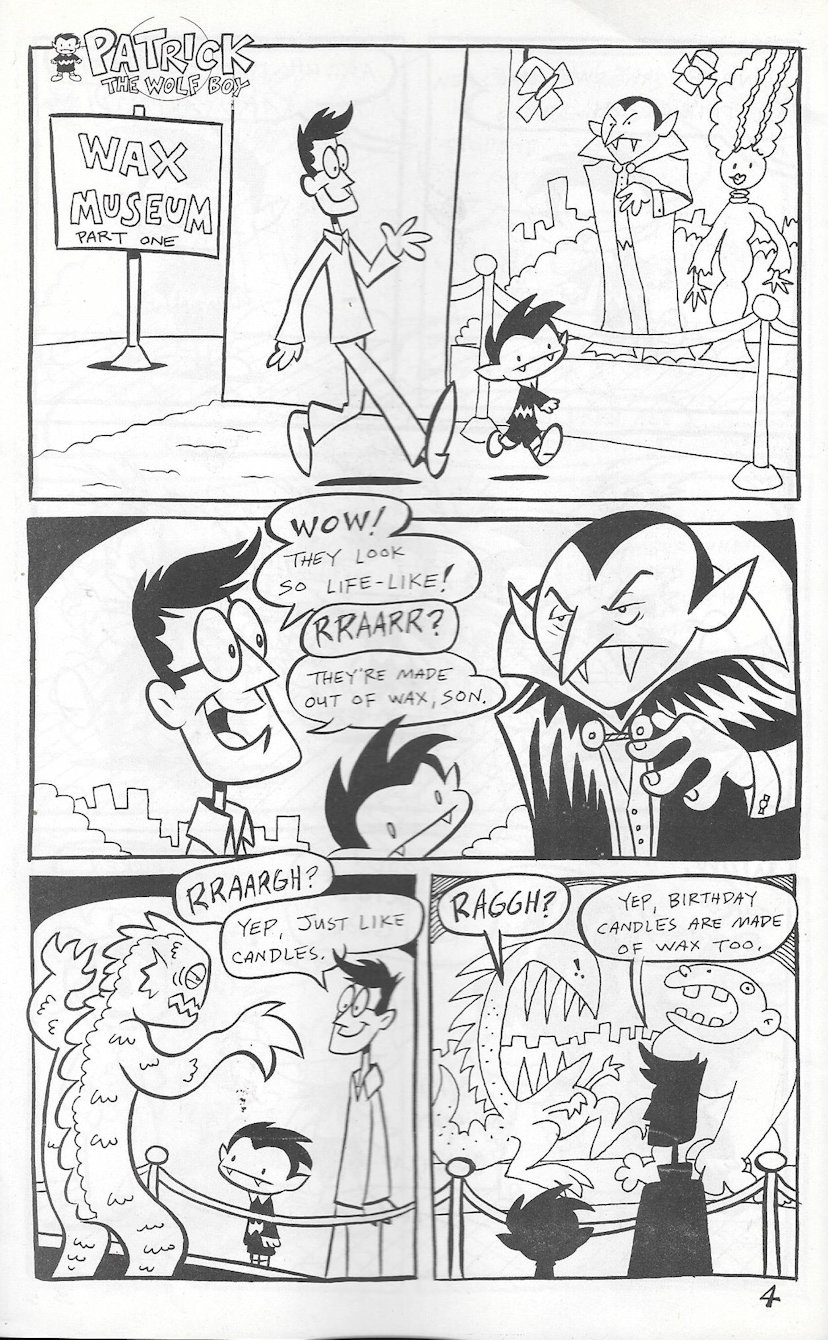 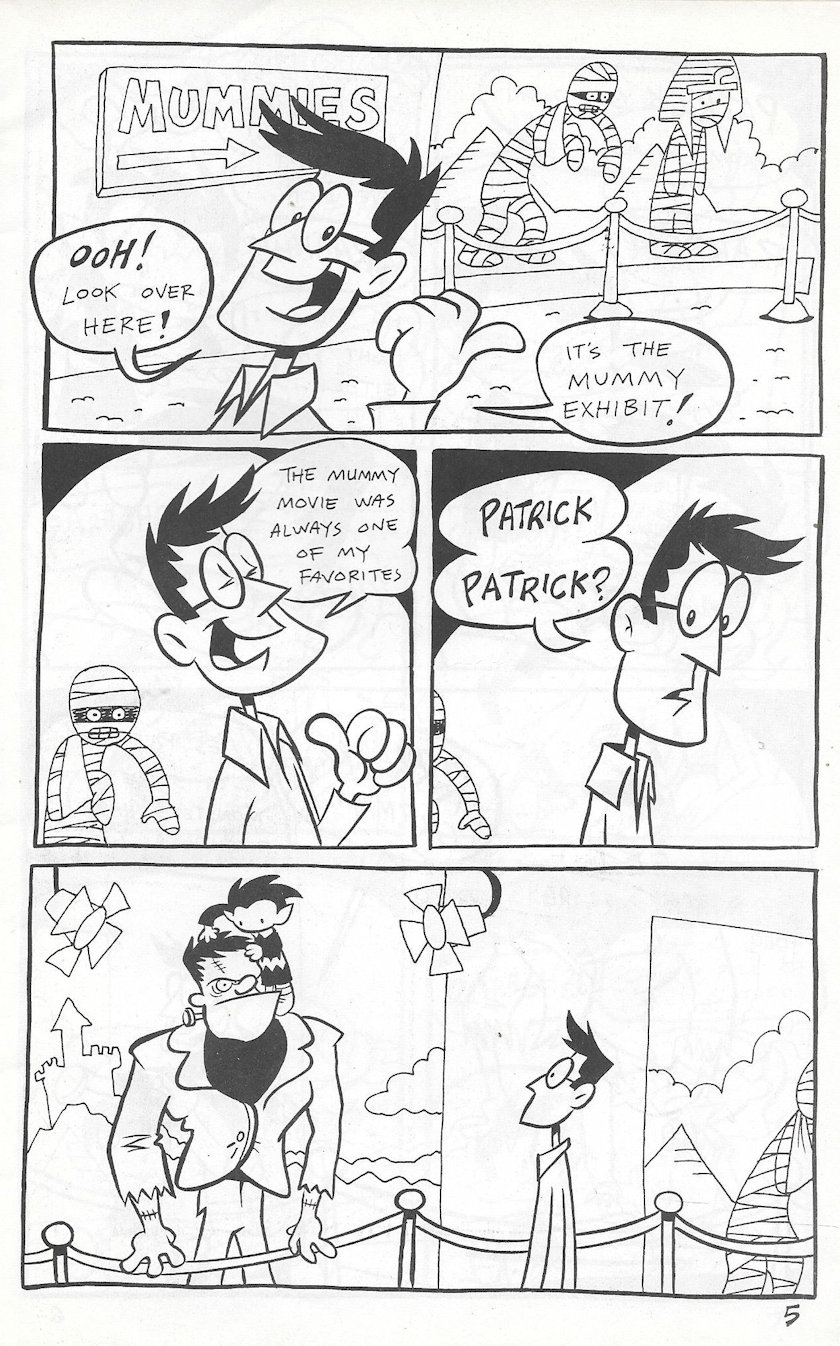 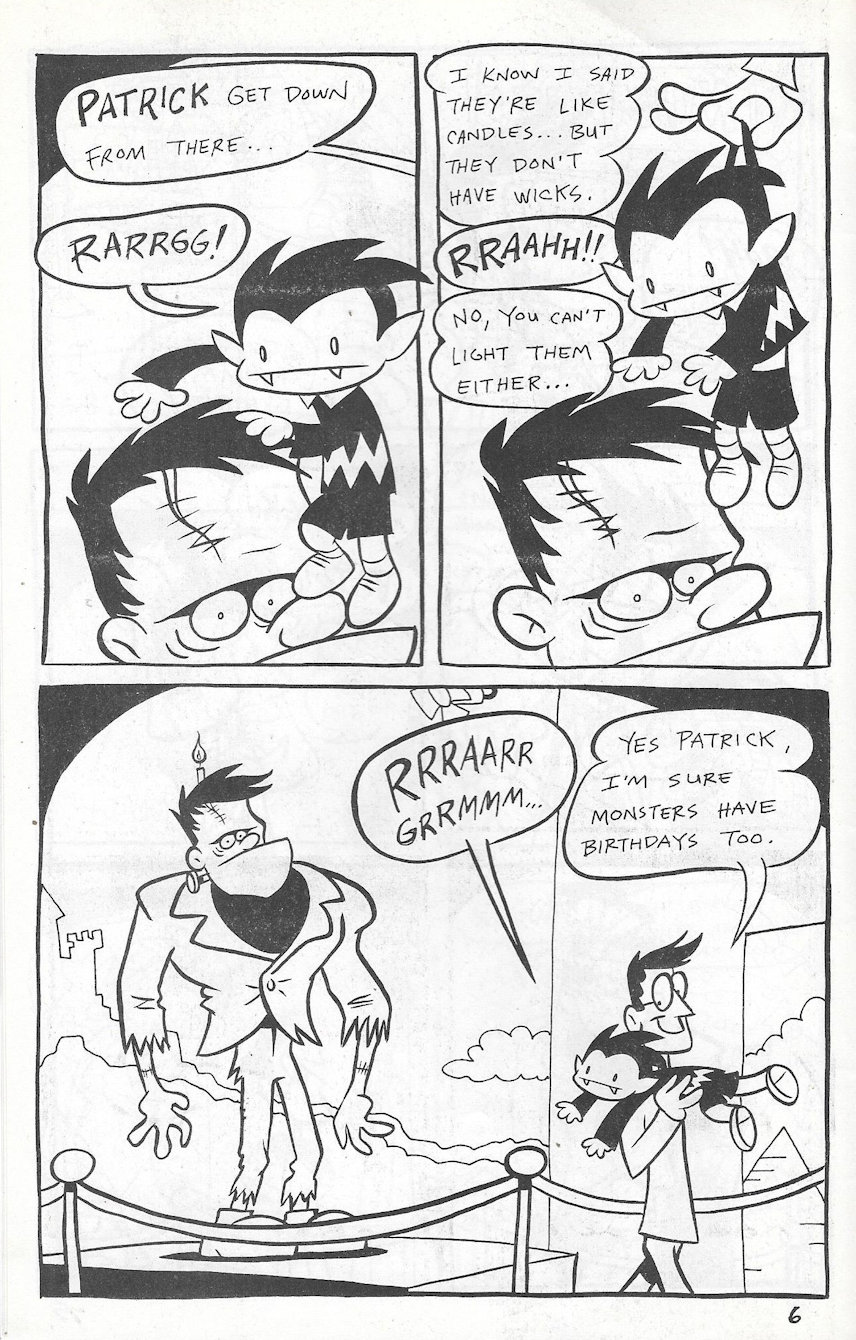 There are more short funnies in the book, but this thing is wolfsbane to me. Get it away. Now. Please.

Posted by SonOfCthulhu at 2:15 AM