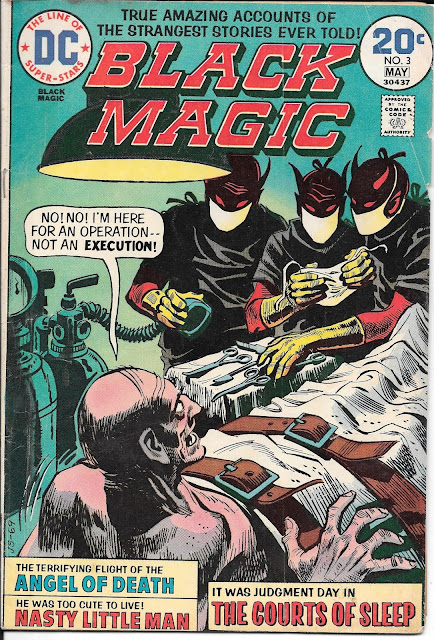 Some old friends via reprints

In the past I’ve harped a bit on Marvel “repurposing” old horror stories for new anthologies, so I suppose I should do the same here to DC. Even though this 1974 DC series pulls stuff from two legends for most of its content. Namely Joe Simon and Jack Kirby. We have three tales of terror from various issues of Vol 2 of Black Magic (this title being Volume 3 with that name), so let’s hop to it…

We start this issue off with a train story and I’m kinda wondering if I missed some sort of chance to have Horror on the Rails week, what with all the terror train tales that have come up by chance this Halloween. Regardless, we being with three hobos jumping a freight car only to find it occupied… 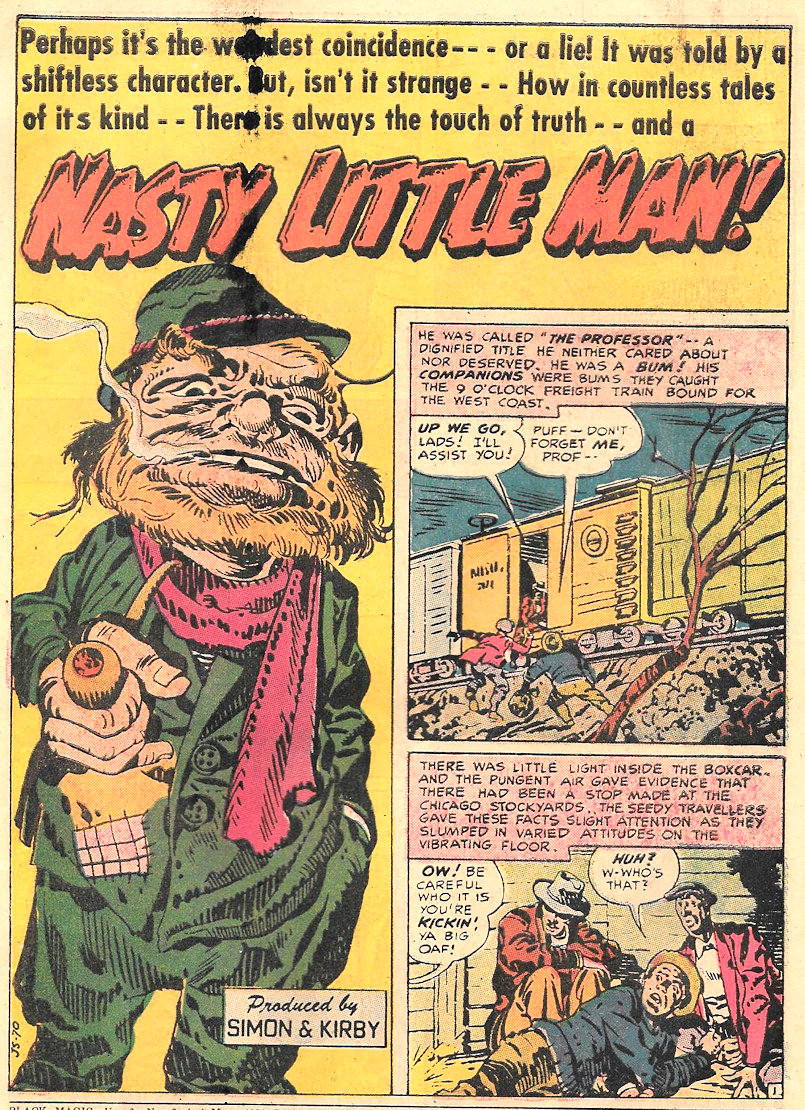 By Paddy O’Day, a midget Irishman with a horrible temper and a lack of people skills. The tiny terror growls at the new arrivals, who don’t take his threats to heart. Before they beat the little person senseless, Paddy brags that he has the blood of wizards flowing through his veins, which causes one of their number to ask him to prove himself. 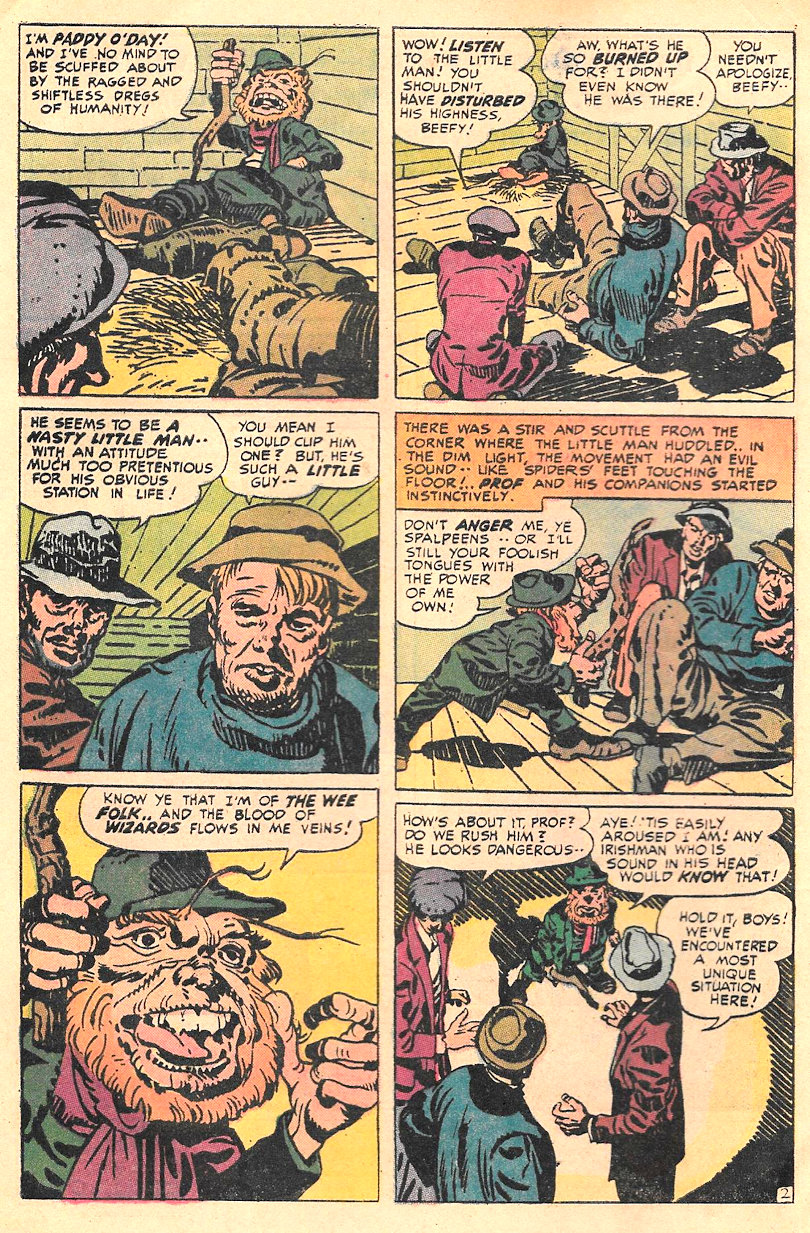 Which, lo and behold, Paddy does, conjuring up a mess of diamonds from his hat. The three interloper’s riches are short lived, however. The gems turn to rocks as soon as the trio pick any of it up. Paddy demures that what are diamonds anyway but lumps of carbon. 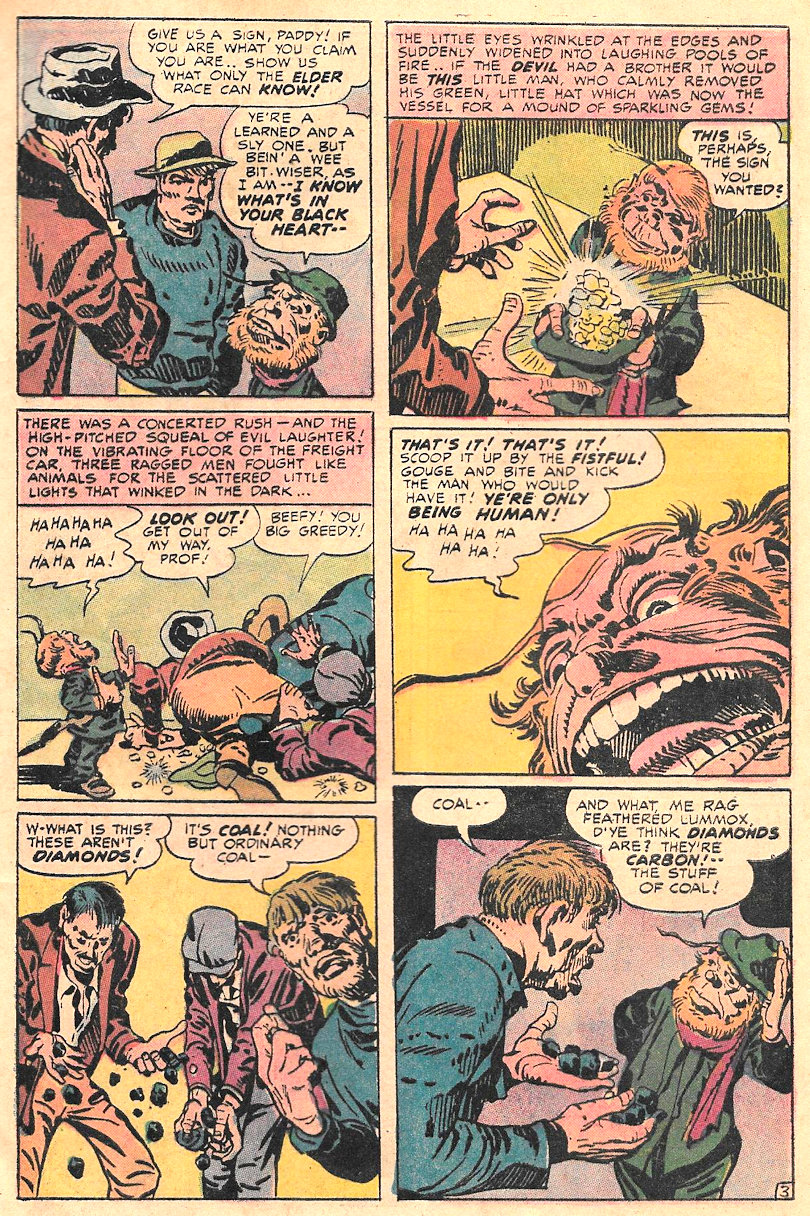 His trick doesn’t set well with the hobos though, and they threaten to strangle the life out of him. Once hands are laid on the little feller, a rumbling can be heard. As one of their number chokes the life from the midget’s body, a massive avalanche hurtles down the mountain straight at the train. 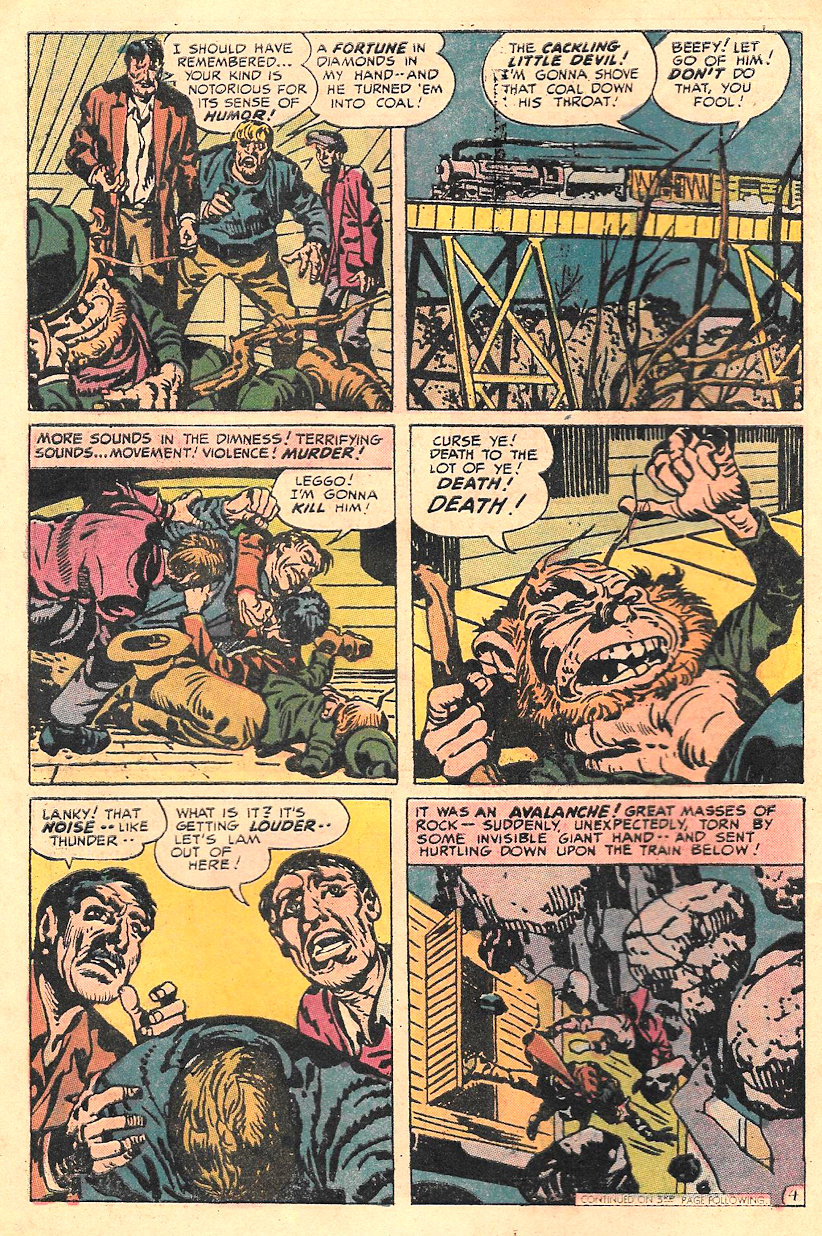 Only two of the men survive the accident by jumping from the car, but one is gravely injured. Prof and Lancy, his more healthy companion, find themselves alone in the wilderness and pursued by the undead spirit of the vengeful little leprechaun. 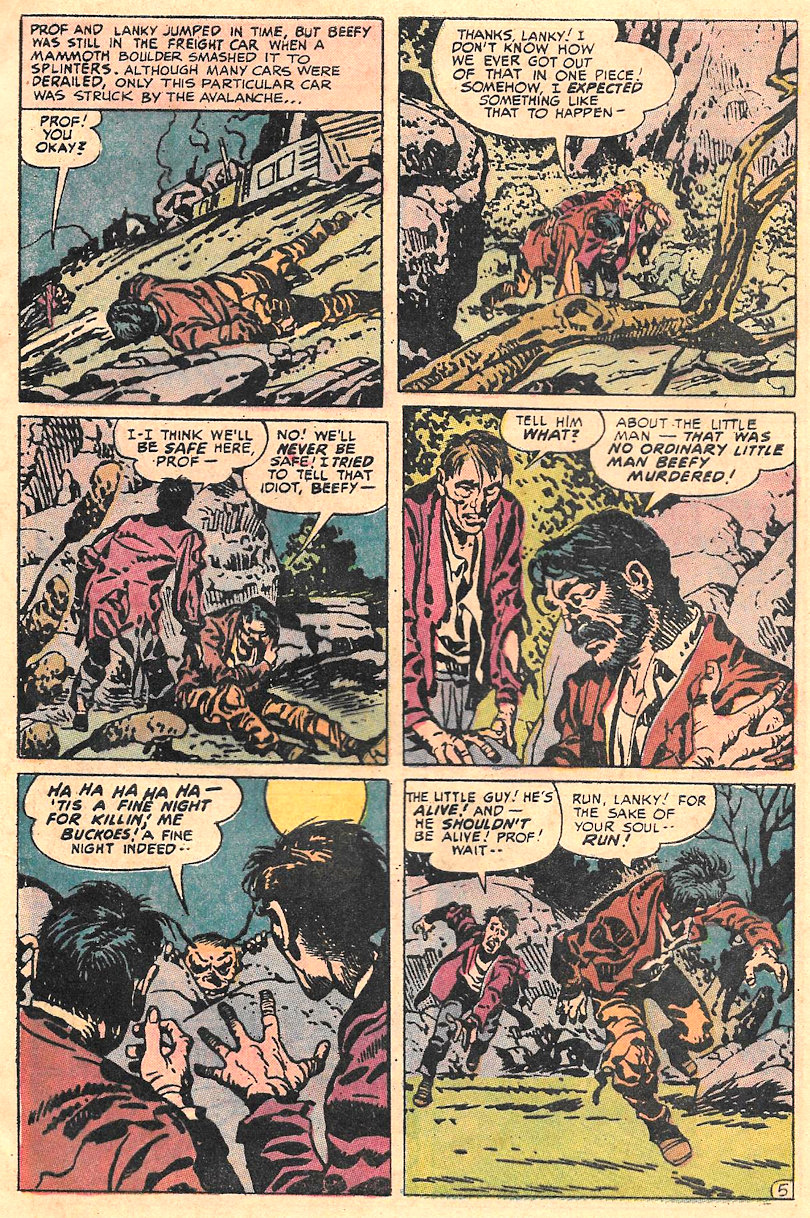 However, for all his fancy uninjuredness, Lancy can’t outrun fate as a hand snags his running form and drags him to his death. The prof runs on until exhaustion overtakes him and he collapses by a road. He comes to in a hospital. 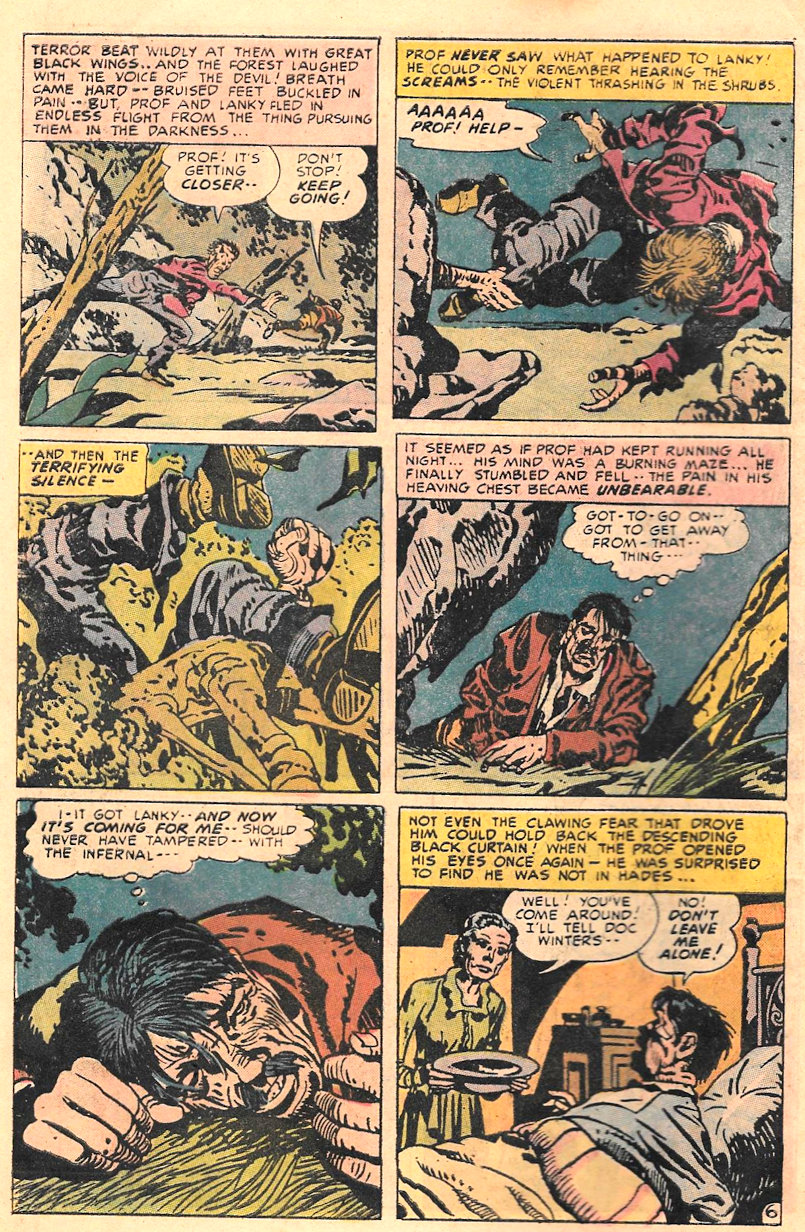 His story cuts no ice with the doctor. As he is left alone to rest, he notices a visitor in his hospital window… 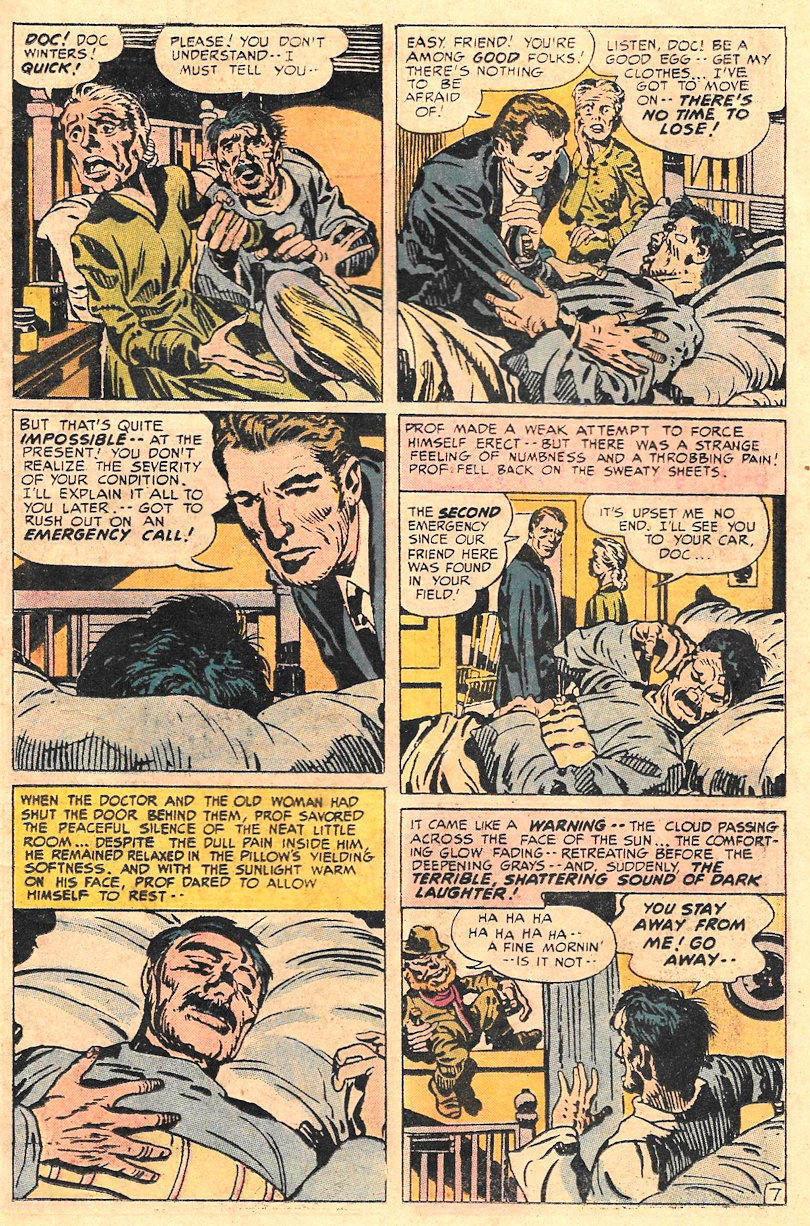 …But when prof turns to flee, he realizes the doc had to cut off both of his legs to save his life. And thus he is in no condition to get away from the nasty little man, who does him in at last. 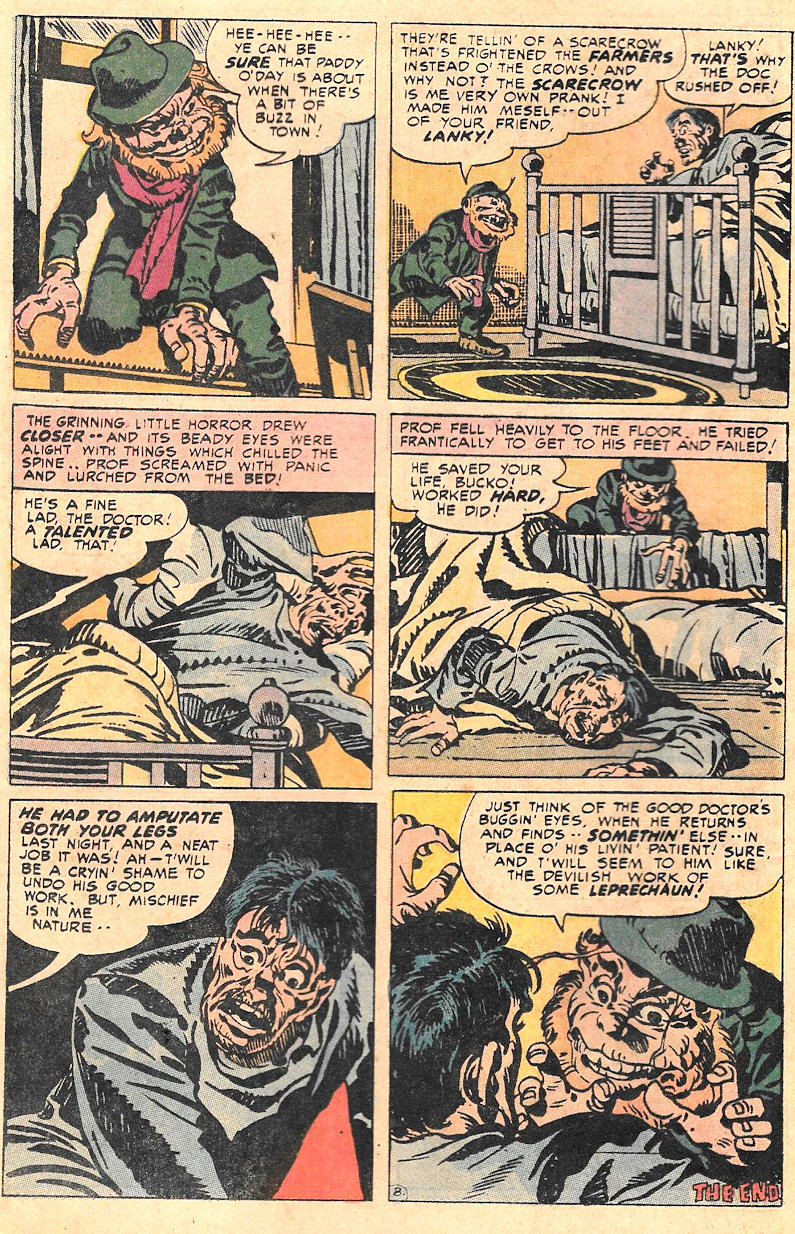 The Angel of Death! 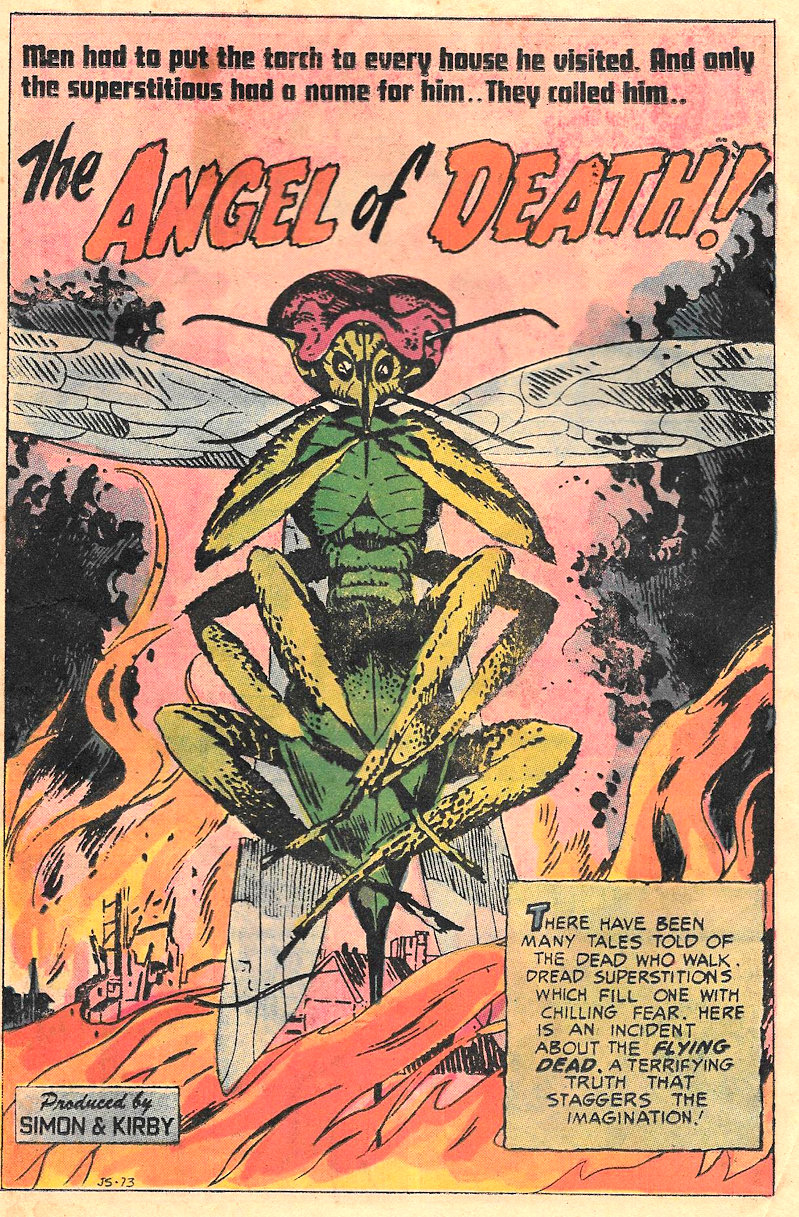 And now on to the pandemic part of our show…We have Doc Jean Lescoux ministering to a deathly ill old man named Fernand. Through exposition we learn that the wife despairs that Fernand will die the same way a girl down the street did. Most of these fears are struck because both the girl and her husband saw “an angel of death” before falling ill. Doc Lescoux is more hopeful and measured in his assessment. 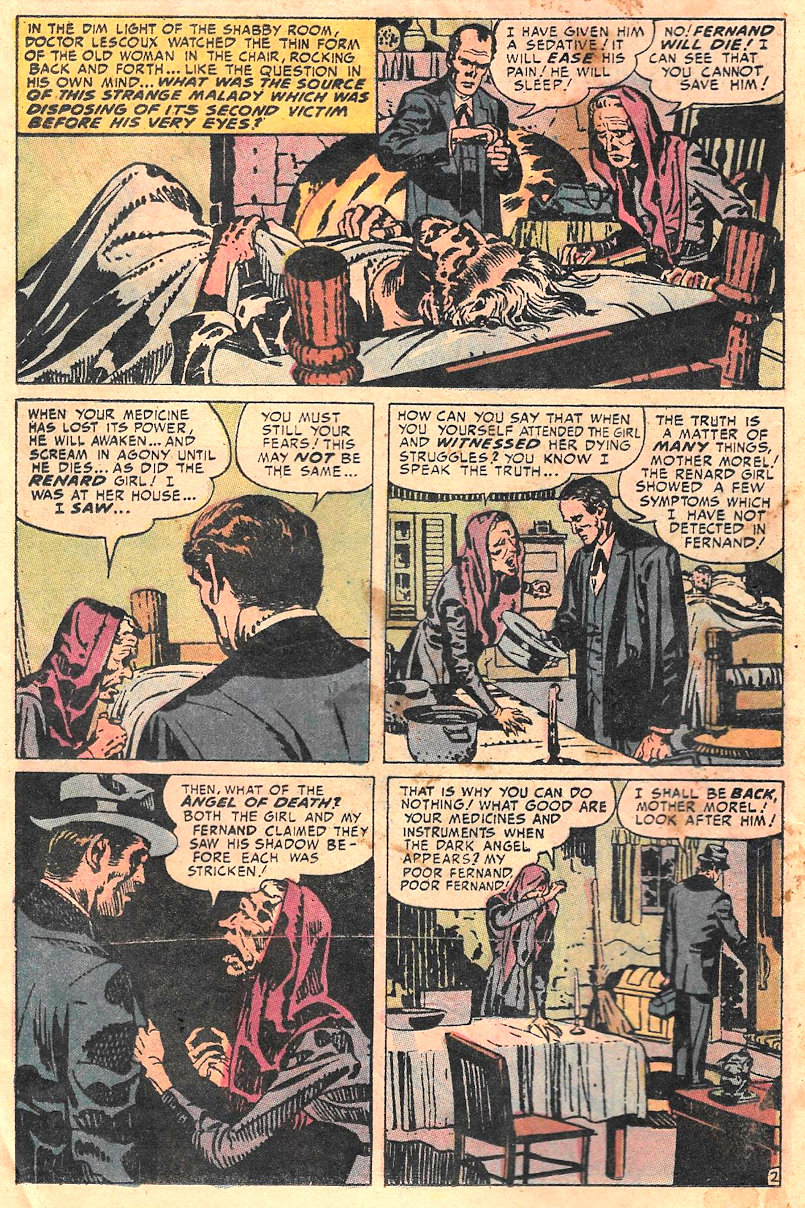 With is wife, the doctor is more truthful though. He worries about this malady shared by both victims that he cannot classify. Just then a boy arrives stating that the “angel of death” is over his house and his uncle Phillipe is sick. The doctor rushes to assist. 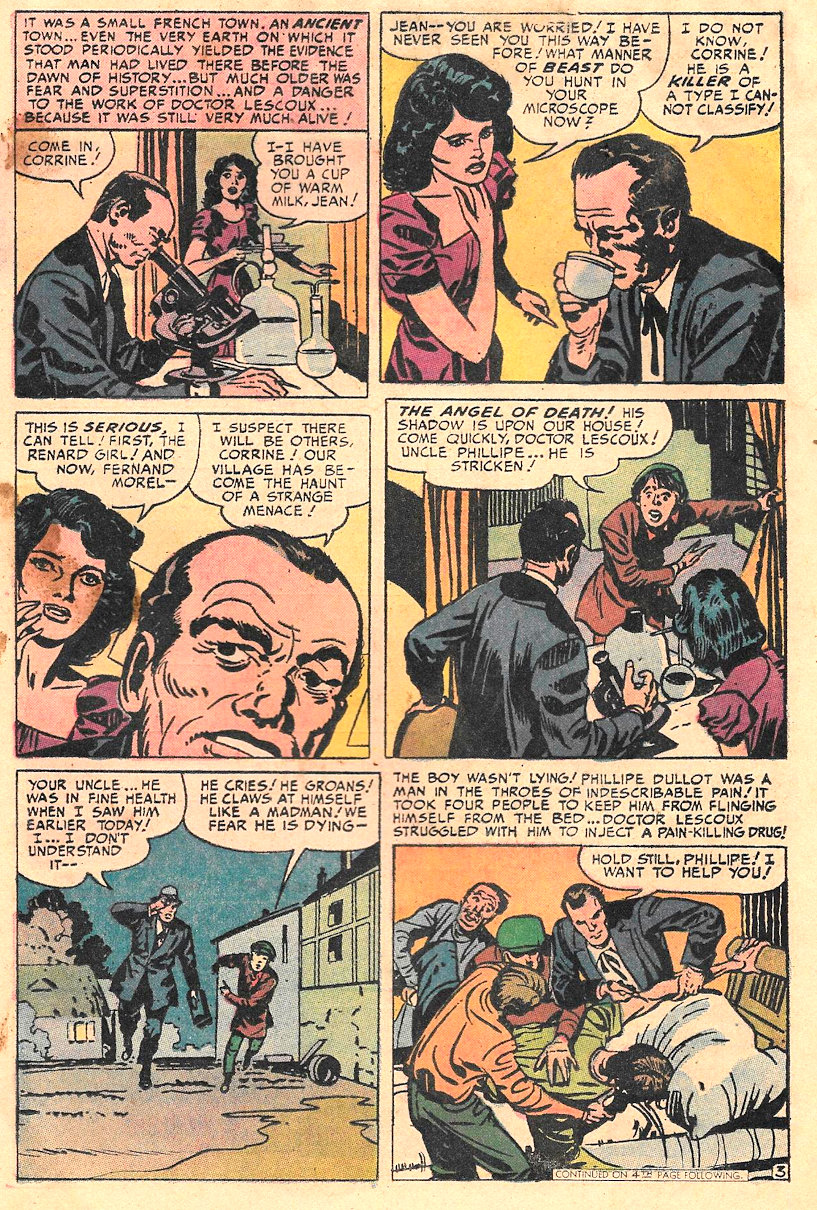 Just then a cry is heard in the street. The group runs out to find something large flying away from the man now injured. The doctor states upon seeing this creature that he knows what the enemy is. 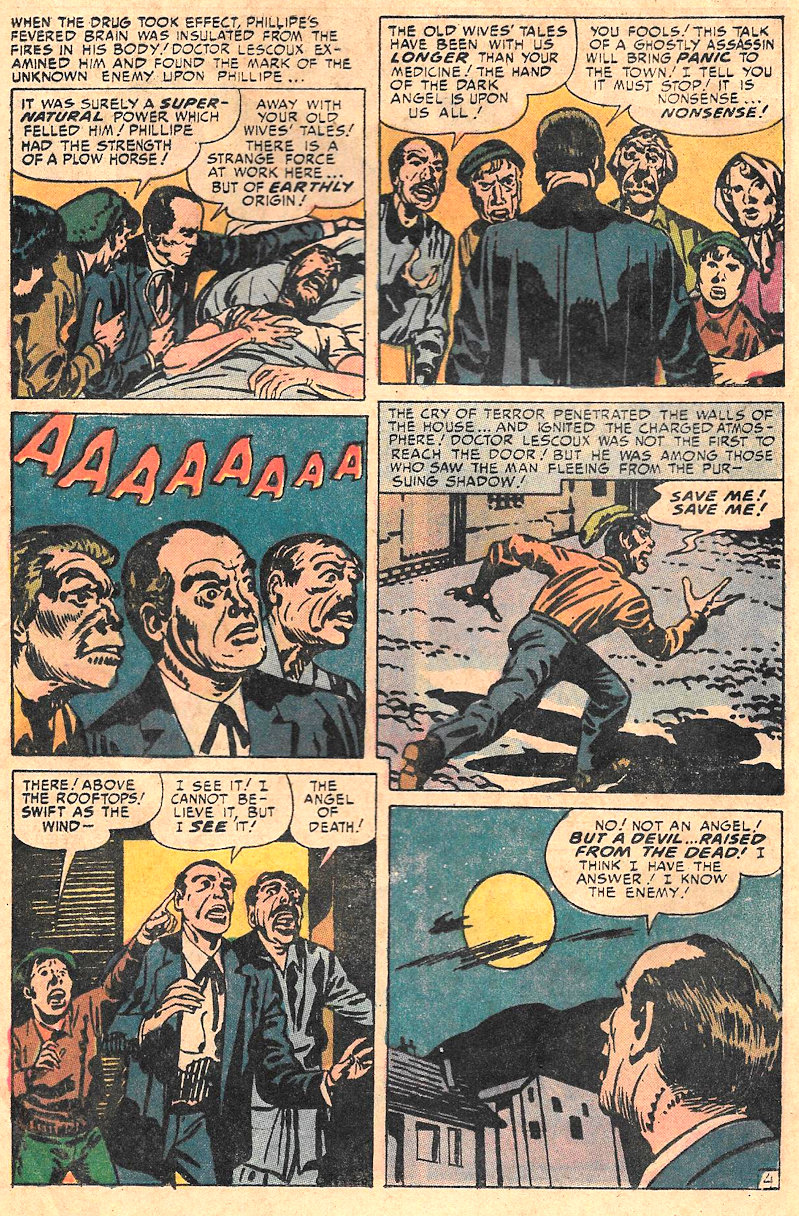 With that, Lescoux arranges a meeting with Professor John Langford, responsible for the digging up of the hills outside of town. Seems the doctor recalls that the scientists there found fossils at their dig site and certain this is the cause, he makes it known that one of their “living fossils” (just go with it. We all know what’s wrong with that statement) is missing. And certainly it is, although the professor thought it was stolen. The doc lays it on him that the creature is alive. 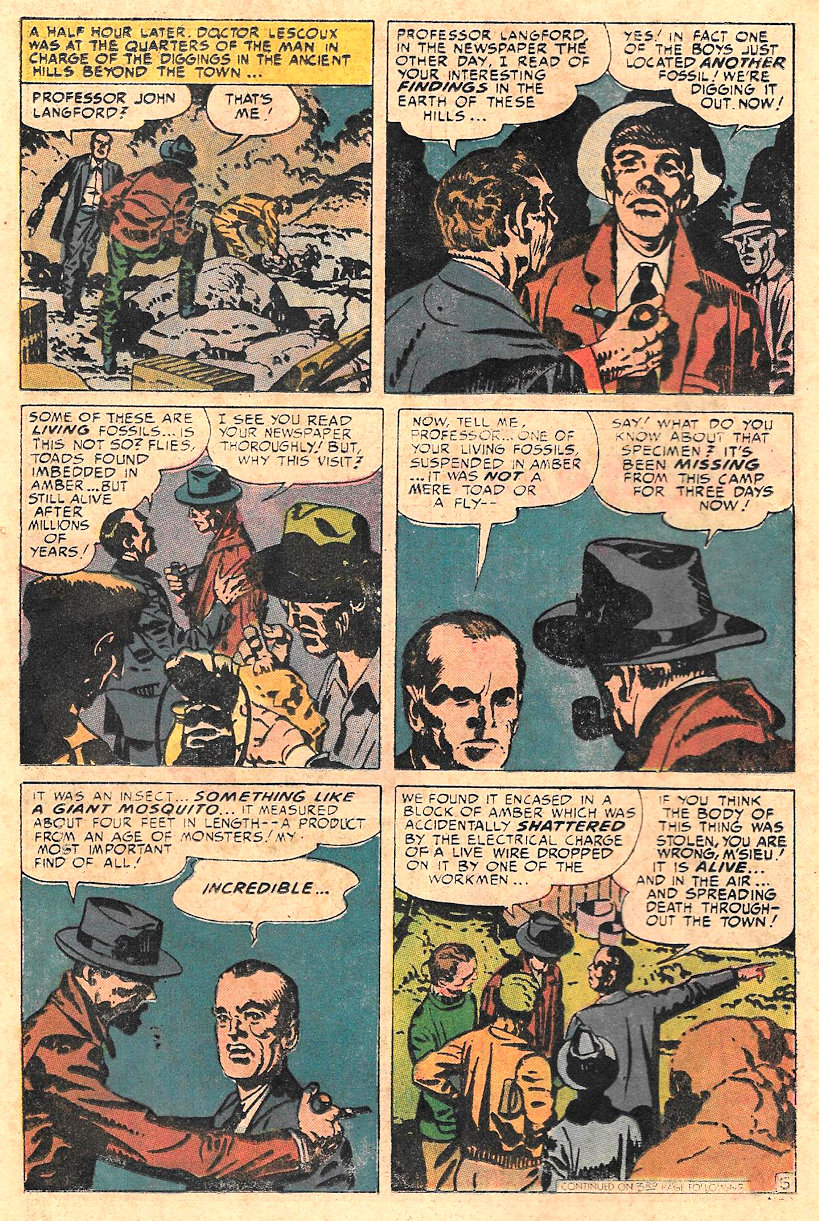 And thus the townsfolk track the flying menace, burning houses suspected of harboring it. 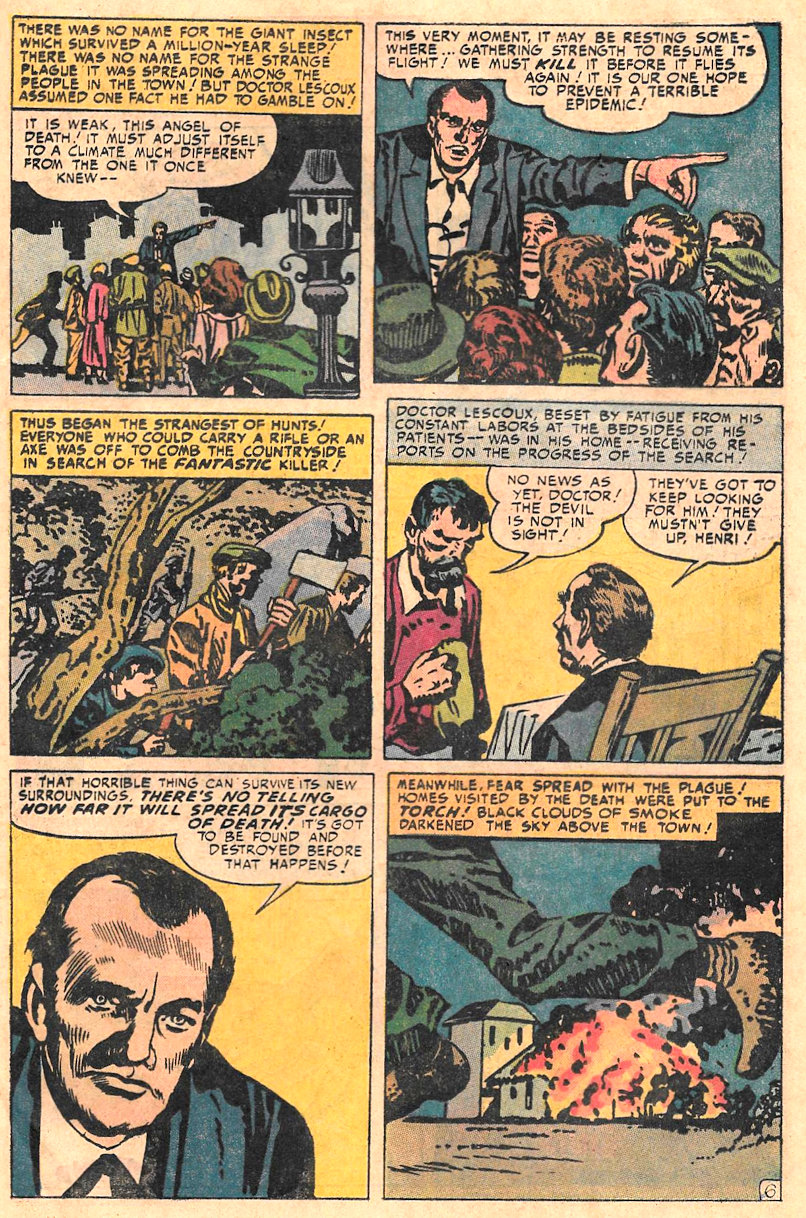 But it isn’t until Loud Marius brings a large sackcloth bag into town that the nightmare ends. A package containing the body of a huge insect that Marius emptied his shotgun into after surprising it in his wood shed. 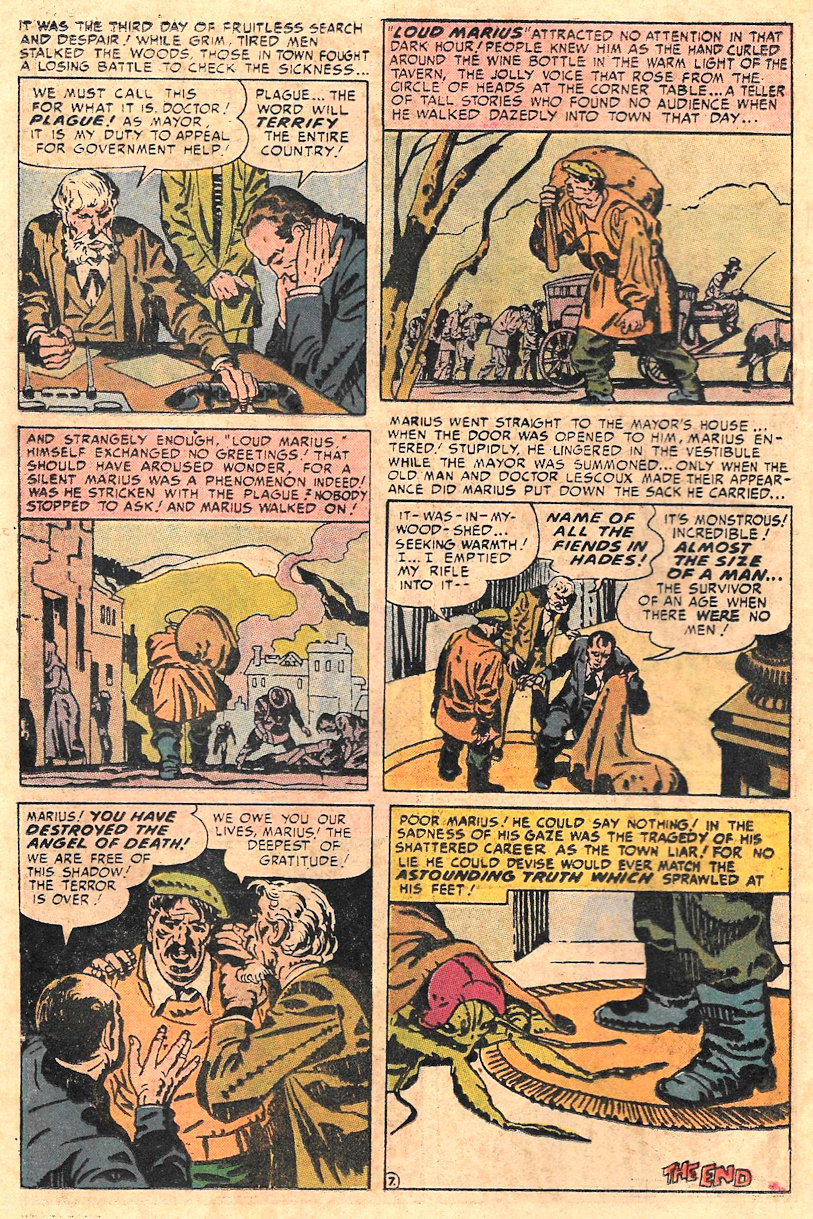 The Courts of Sleep!

Our final visual tale takes place in a hospital. Silas Stone, an unscrupulous millionaire businessman, is harassing the nurses ahead of his expected surgery. 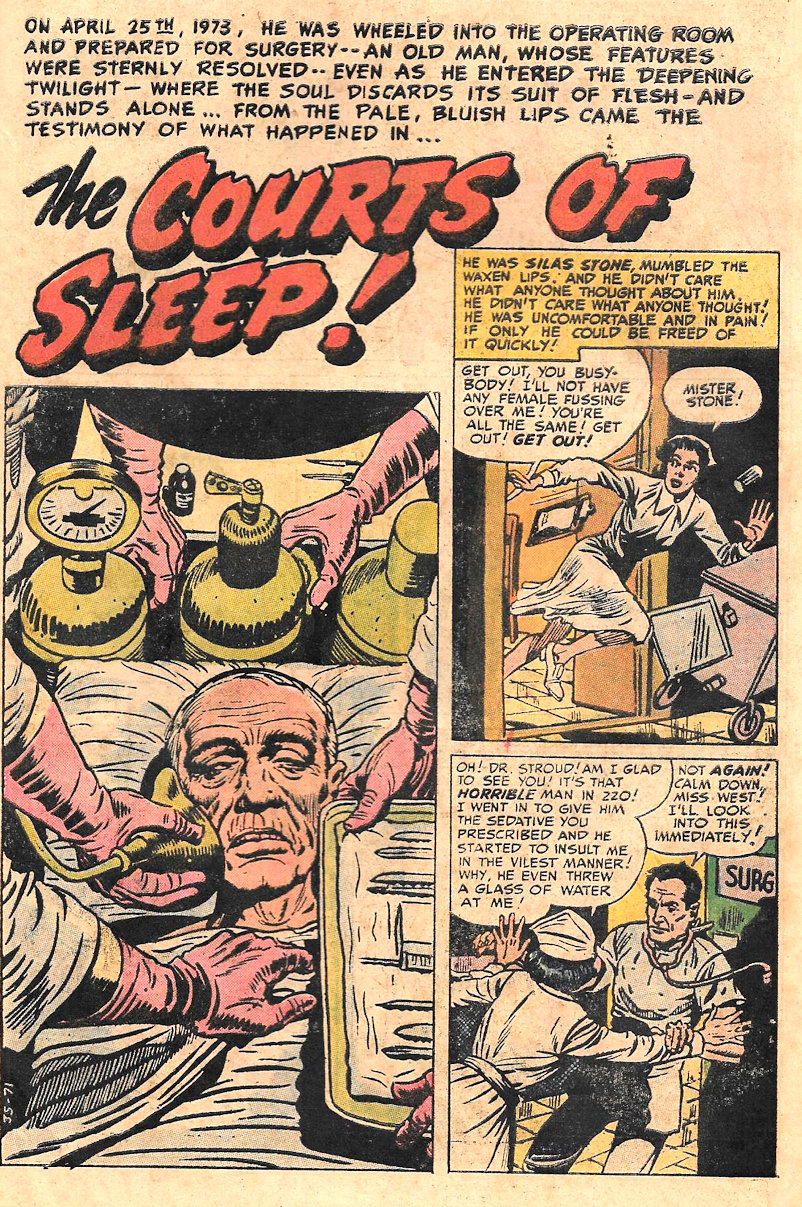 Even the doctor can’t talk sense into the terrible old miser, but is able to rush him in to surgery to take care of his “condition”. 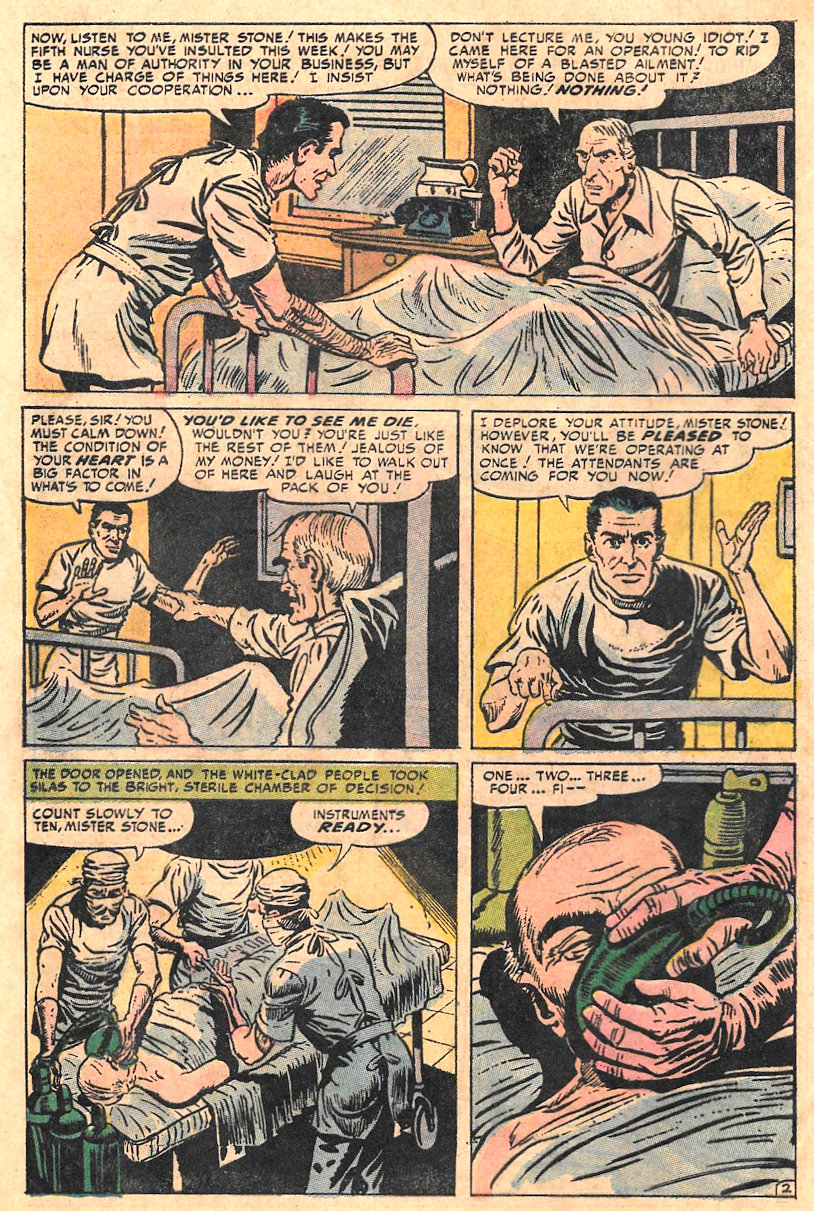 Silas drifts off to sleep on the operating table and awakens back in his hospital room. He’s informed by the doctor that they lost him on the table, but somehow managed to revive him. He’s been granted a second chance at life. As with all these morality tales, Silas is then show acting deplorably still, wasting the clear chance at being a better person. He bullies his way out of the required hospital stay, accosts people begging on the street, and instructs his drive to run over a neighborhood dog. 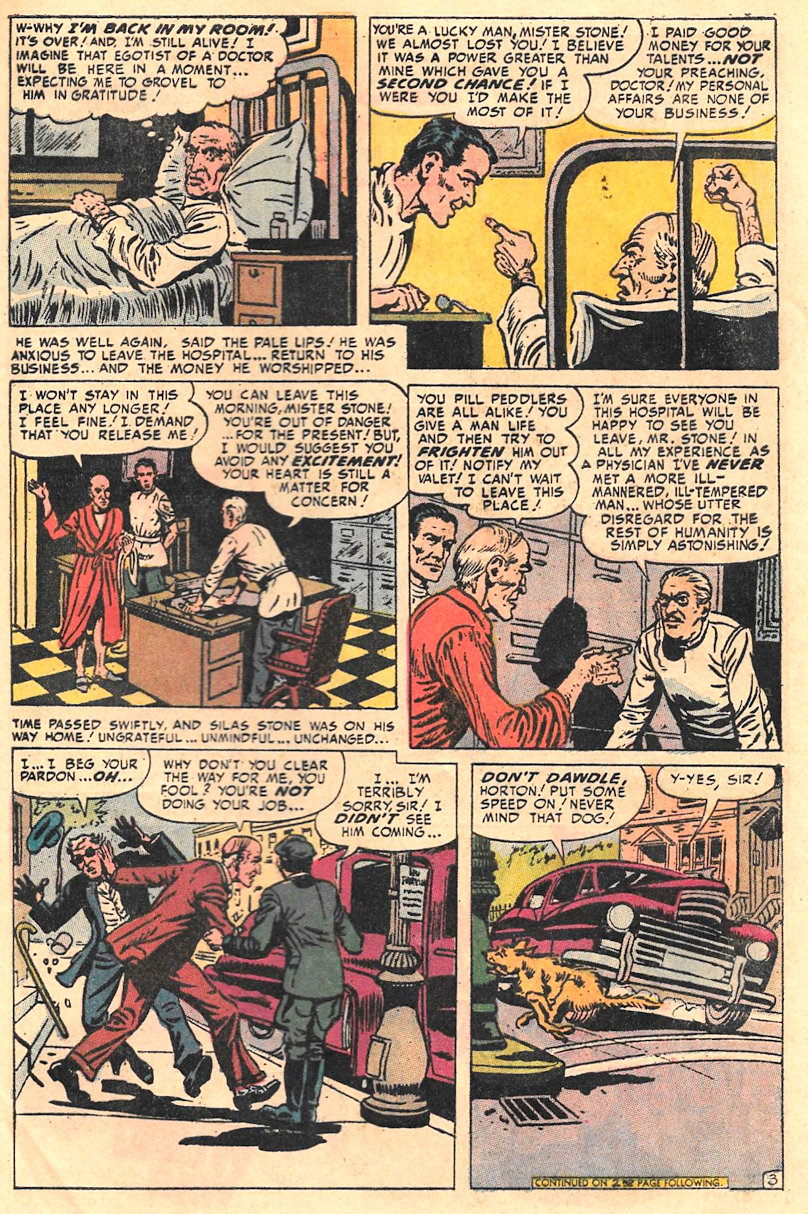 In a subsequent meeting with his lawyer, Silas rips the man for showing compassion to the people who owe Silas money. This action causes the lawyer to go off on Silas, who has a heart attack in the next moment. 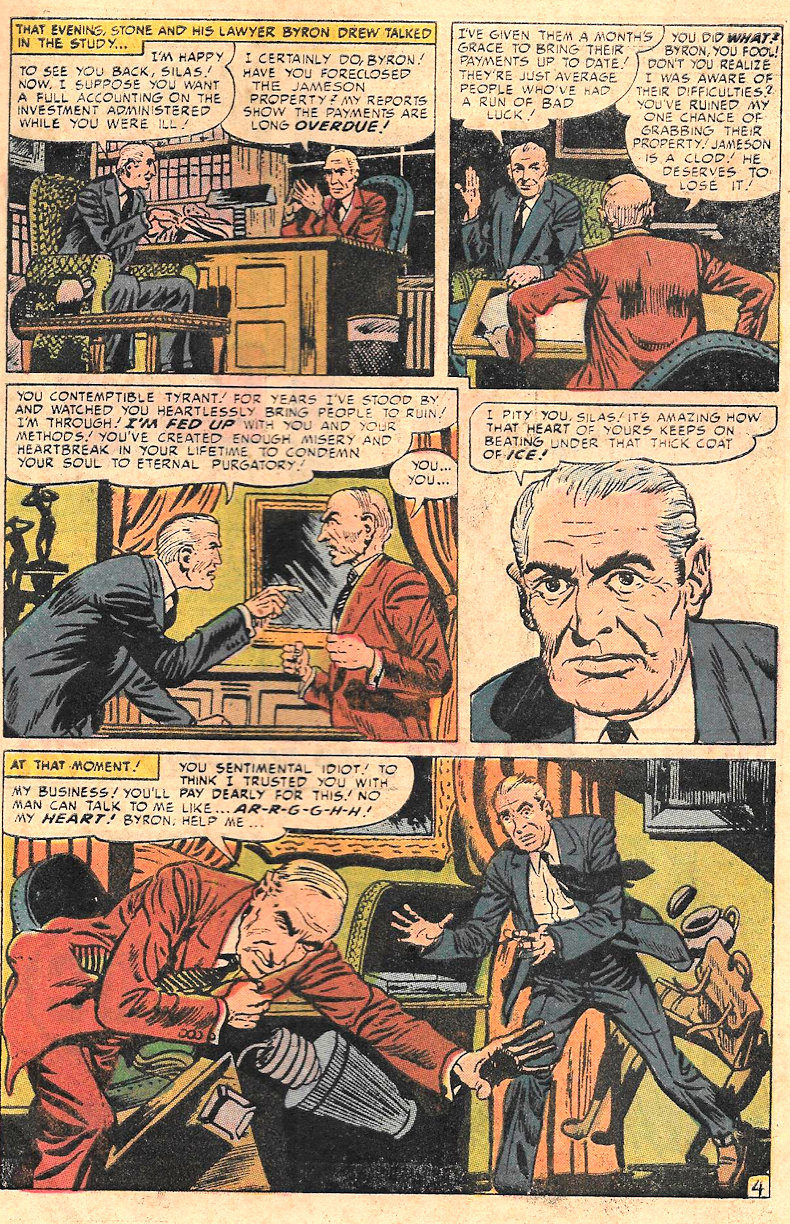 Which Silas awakens from to find himself back on the operating table, only this time not to a very sympathetic operating theater. In fact, it ends up being a trio of quite devilish doctors set to treat him. 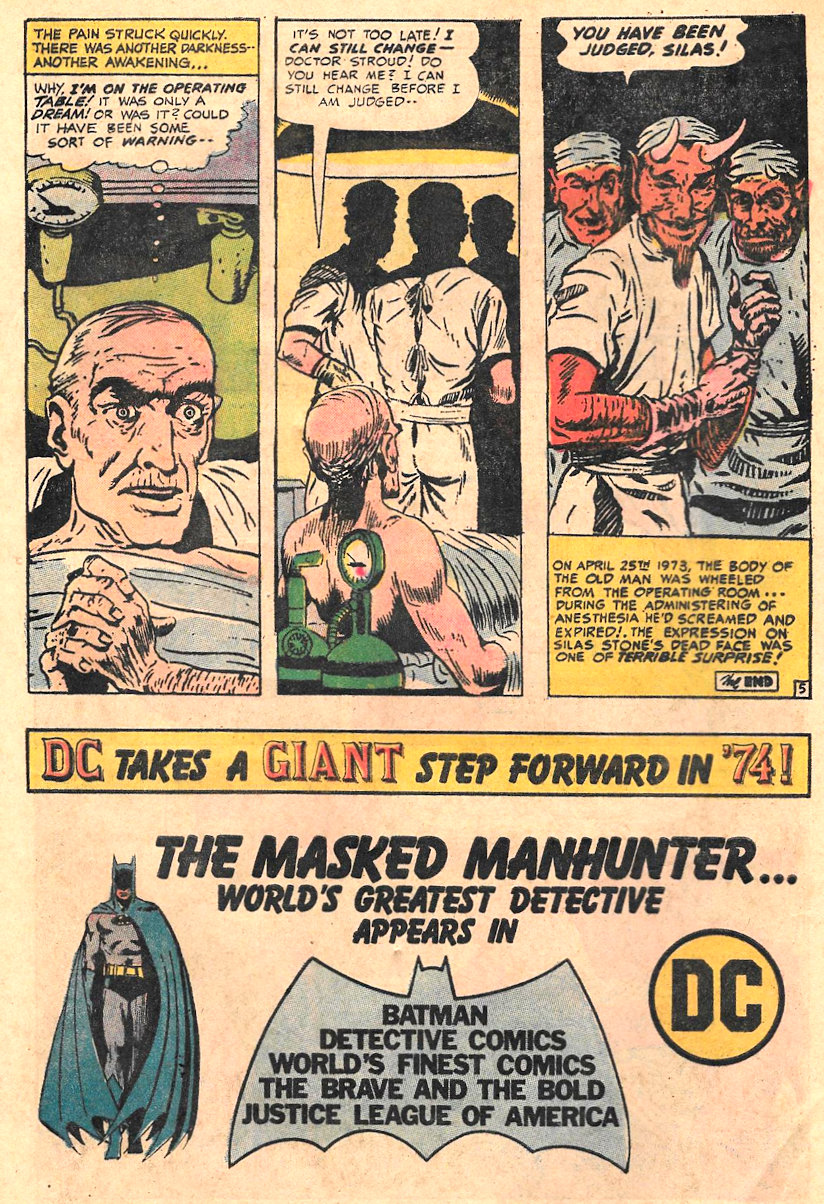 As a final goodbye, Black Magic throws in a one page ghost story in prose form. Give it a look. 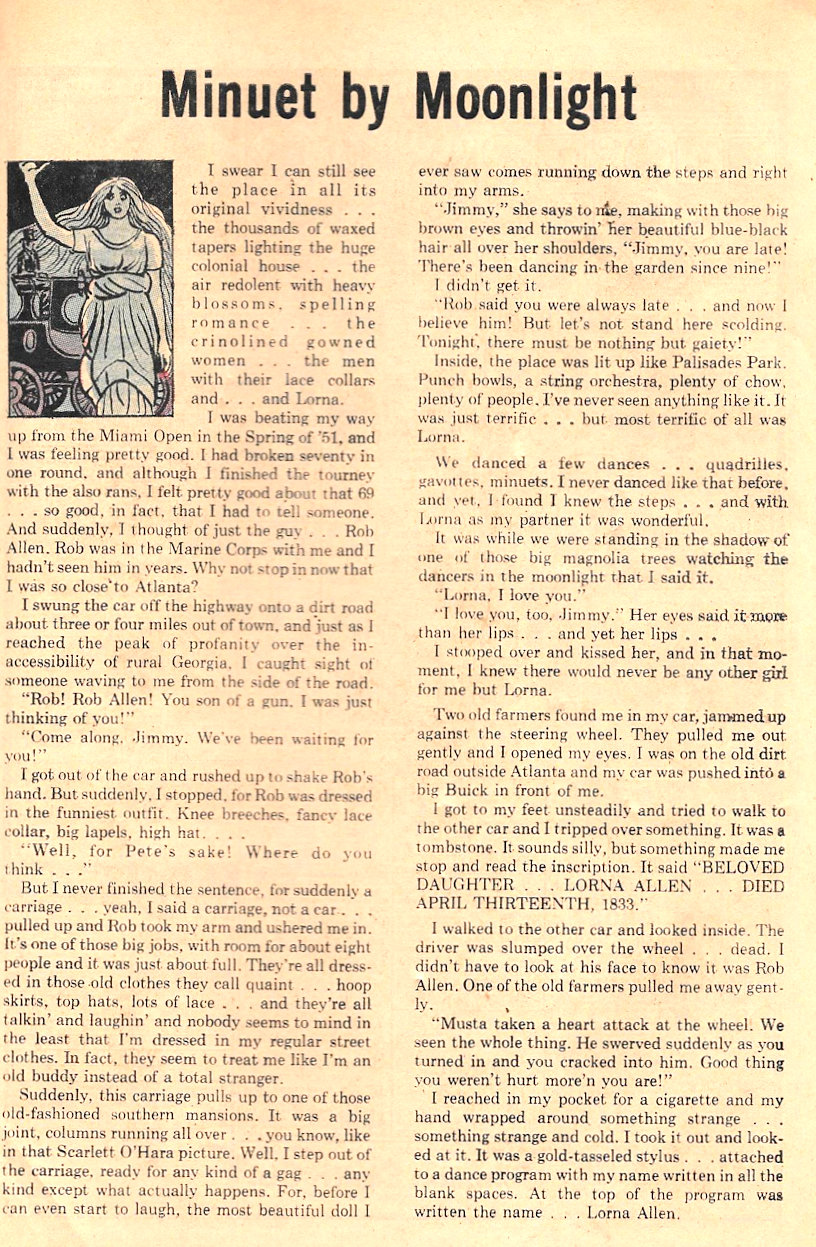 Posted by SonOfCthulhu at 2:56 AM