Adventures Into The Unknown #152

Adventures Into The Unknown #152 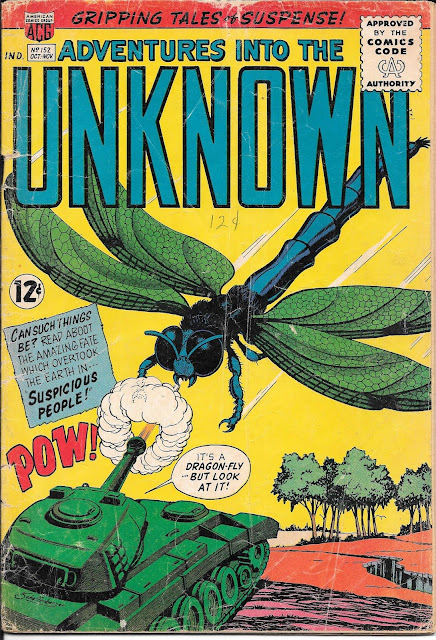 The Crapbox secures a copy of the first ongoing horror comic

It isn’t skill that causes the Crapbox. It is the luck of the draw. In this instance, a very roughed-up $4 buy from Half-Price netted me a copy of issue 152 in for what Wikipedia bills as the medium’s first ongoing horror-comics title. Published by American Comics Group starting in 1948, the initial issue was written by none-other than Frank Belknap Long, one of the early contributors to the Cthulhu Mythos. Unlike many American horror comics, it weathered the public outcry of the 1950’s unscathed and ran for a staggering 174 issues, ending publication in 1967.

Can’t wait to crack open the cover after that introduction? Neither can I. Let’s get to it.

The story out of the starting gate isn’t very strong, but it does set some of the tone of these, which are much like the Twilight Zone shows that had aired a few years before this was published. I don’t know if this is a deviation or inline with the prior 151 issues. This story starts off with the birth of Dexer, who it appears was born a bit mentally deficient. 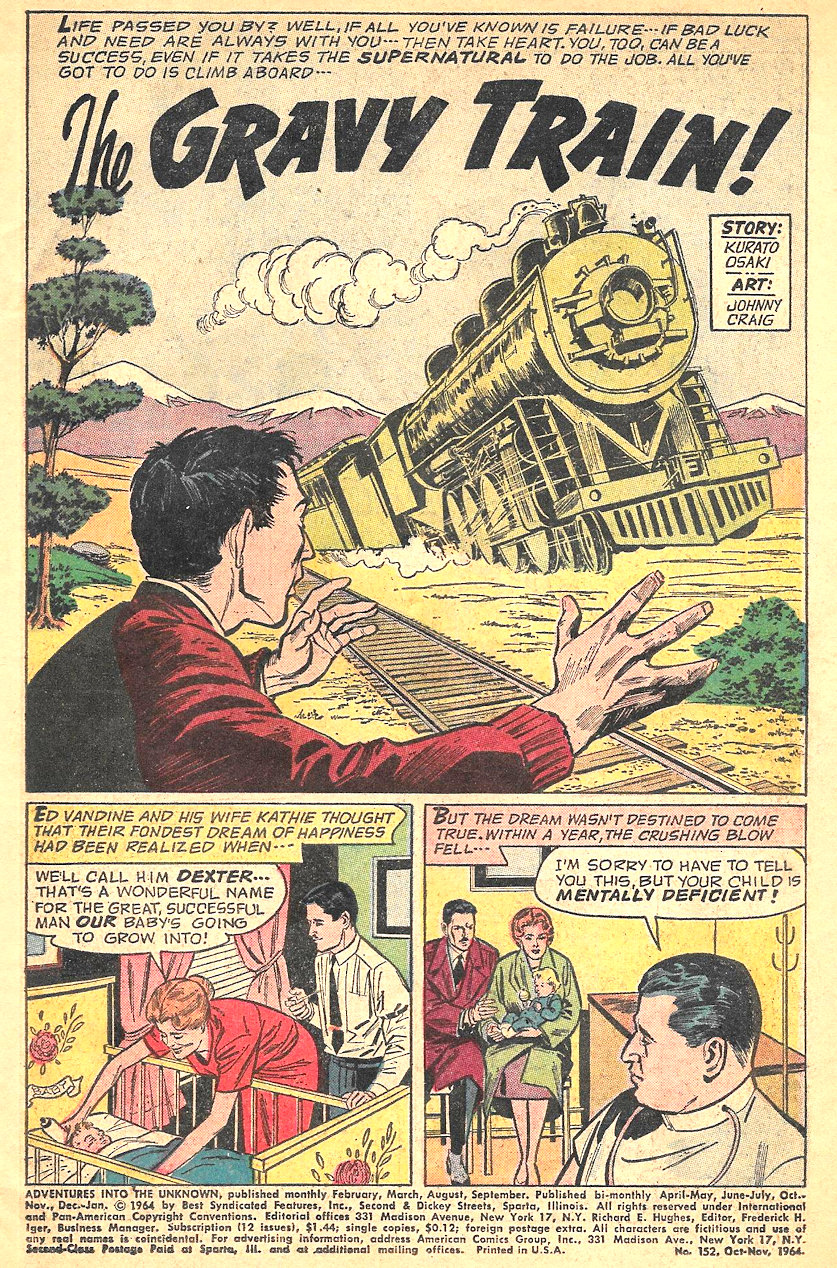 Dexter had a bit of a troubled time in school, with none of the other kids wanting to play with the poor lad. His father however was a beam of pure sunlight, spending time with Dexter. He filled his son with hope that there was a special train…a gravy train…that would stop for Dexter if he was a good boy and if he was ready to hop on board when it did. 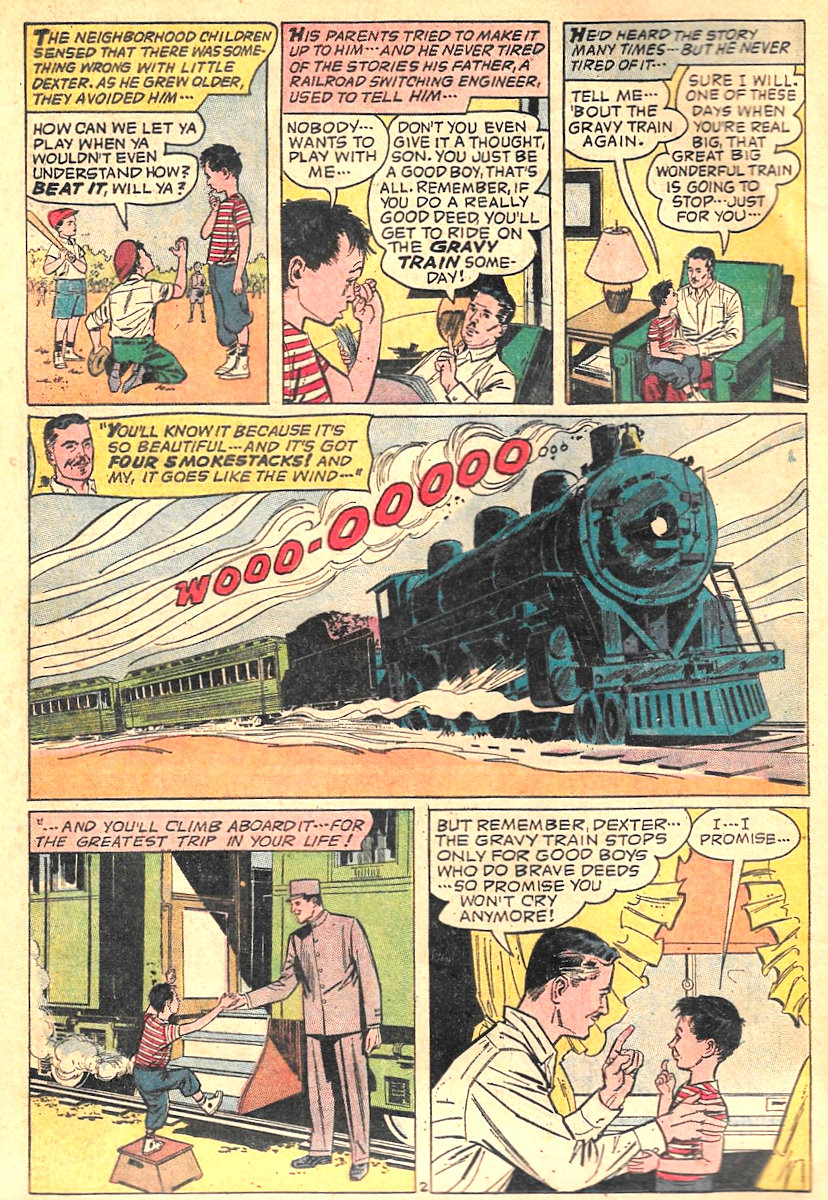 As a child, Dexter became fascinated by trains, even being allowed by the engineers in the roundhouse to help them move the engines in and out. However, after Dexter’s parents passed, he was left destitute and living on the streets. He got hung with the nickname Dopey Dex and forced to take a street sweeper job. 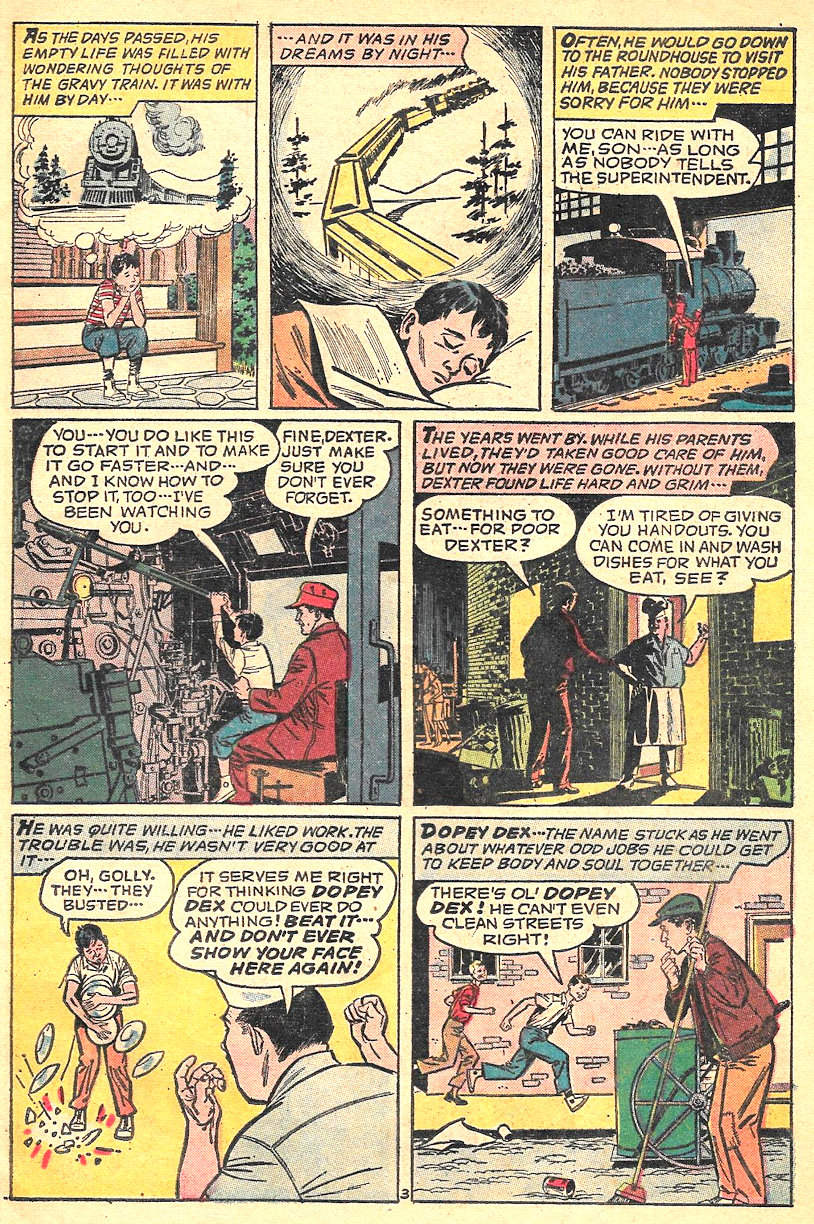 But Dexter never game up hope of getting his chance for the good life. He dreamed of having all the trappings of a good life, from being pampered, to wearing nice clothes, and dining in finery. Nor did he give up his love of trains, eventually falling in with the hobos that rode the rails. 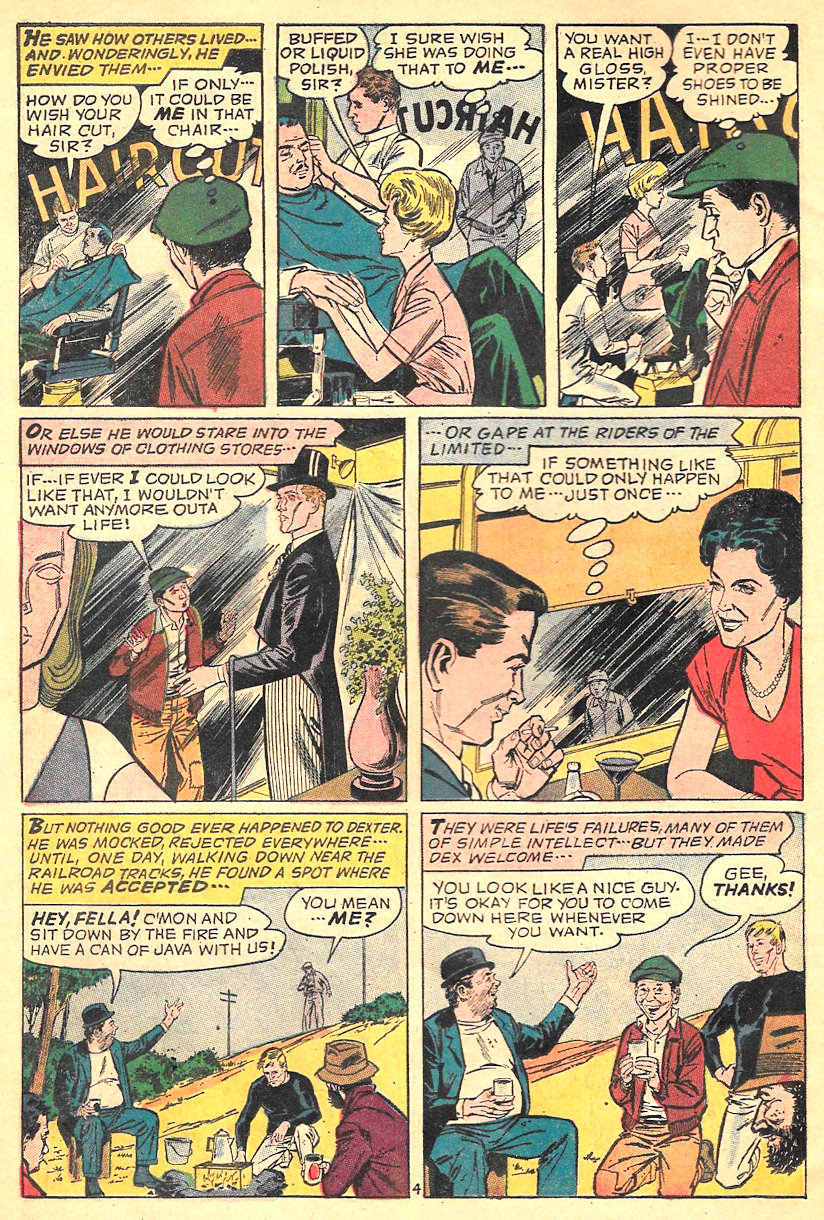 He shared his simple-minded vision of the gravy train that would come for him one day, and none of them disputed his version. Yet several of them had plans for a gravy train of their own: robbing a million-dollar cash shipment. A robbery that would involve Dexter by necessity. 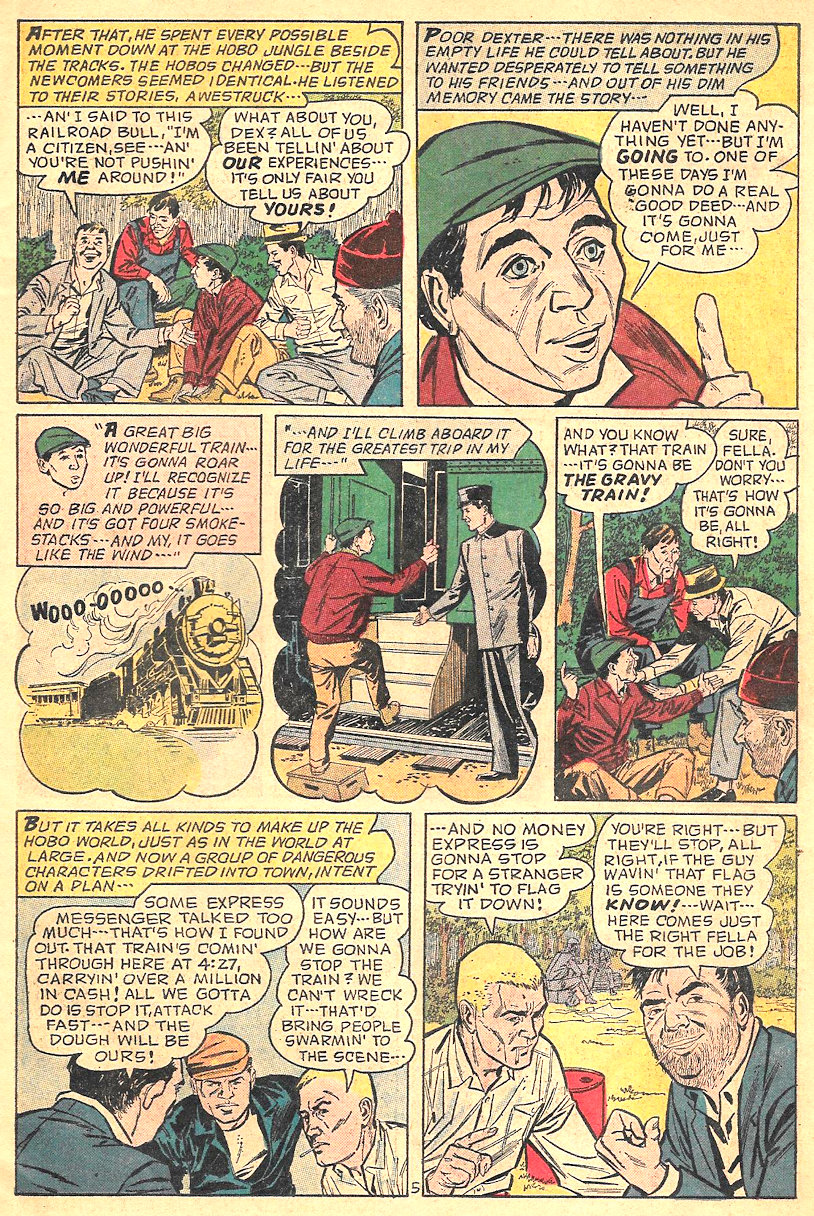 And rooking the dear simpleton into helping might have been child’s play…but they didn’t recon on Dexter being upset when they kill the engineer. So upset that he confronts them and gets shot himself. As the gang goes to murder the rest of the train crew, Dexter drags himself into the engine room. 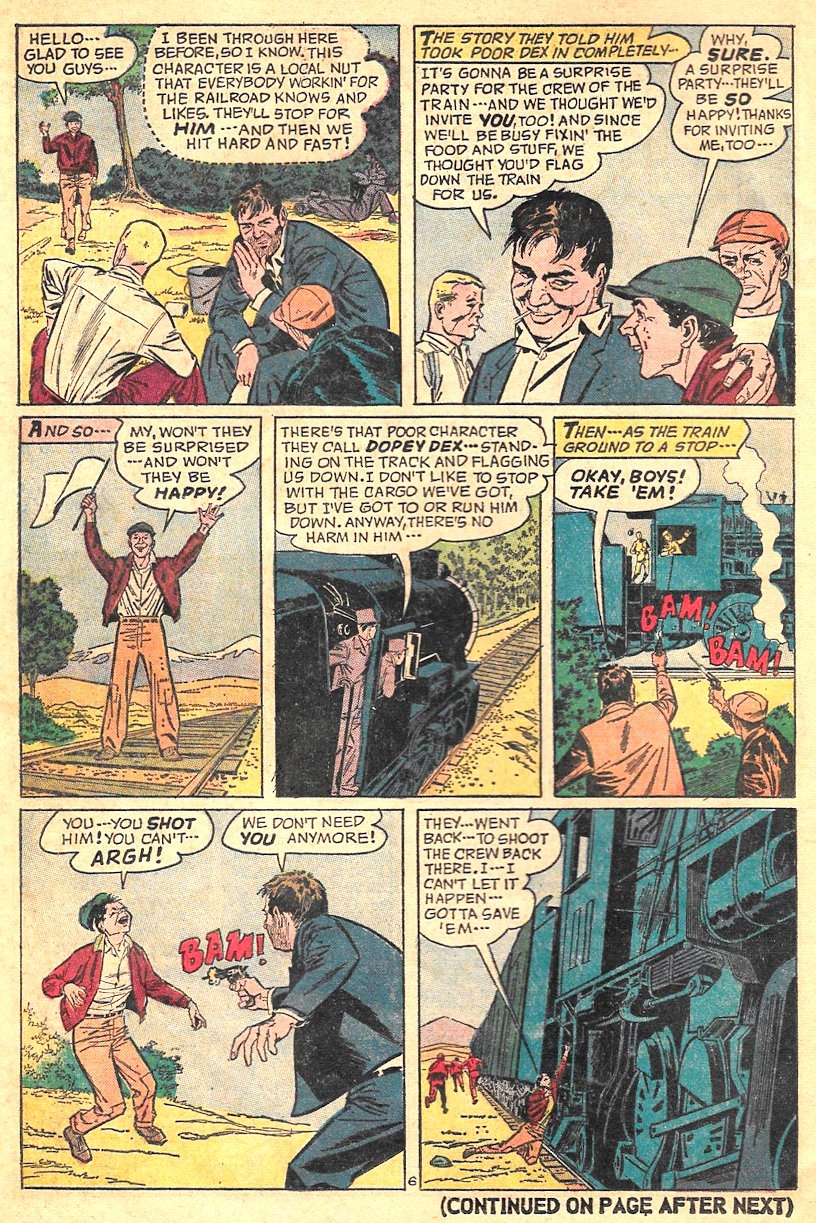 Remembering how to put the train in motion, Dexter takes off before the gang can set a stick of dynamite to blow the cash car’s door knocking them from the moving locomotive. Dexter gets far enough away from them, stops the train and then falls prone himself. 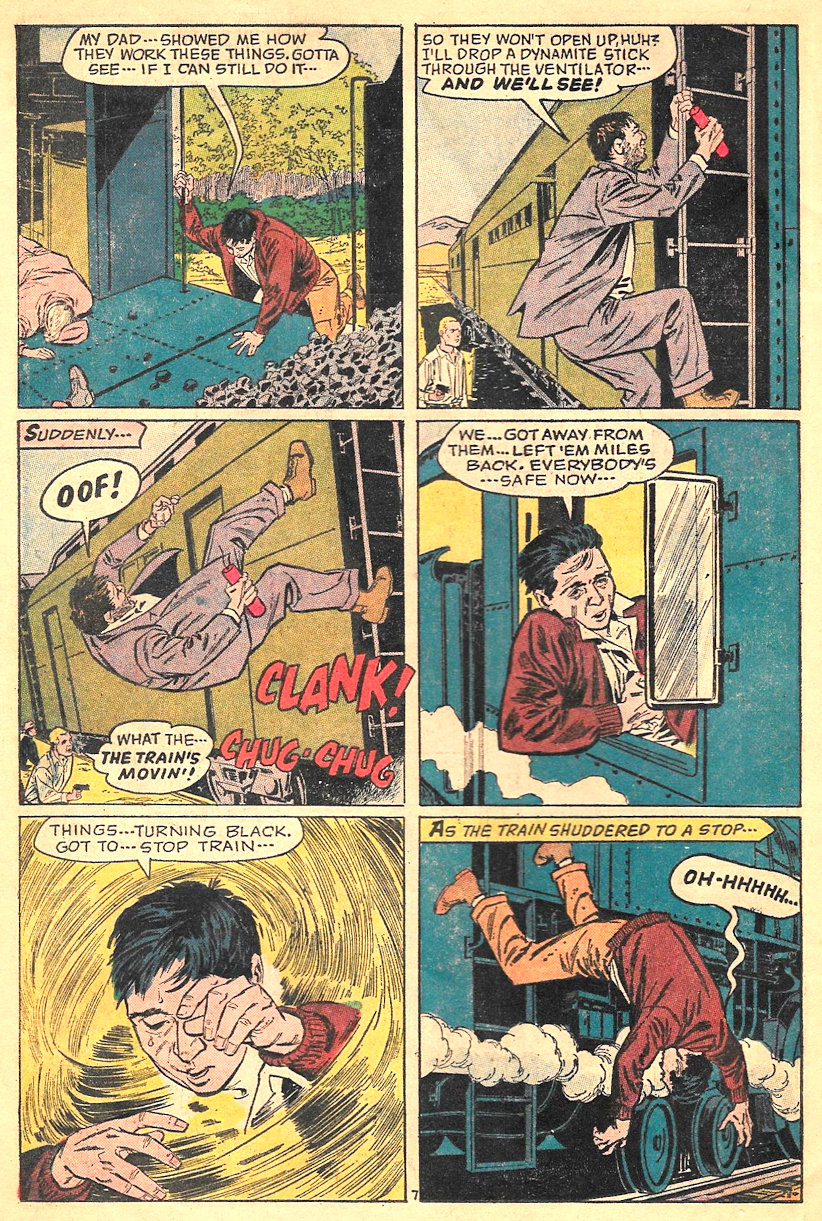 He awakes to find the train gone and the tracks empty. He doesn’t see hurt by the bullet anymore, either. And then to his wonderous eyes, the gravy train rolls up. He is ushered on and given every courtesy… 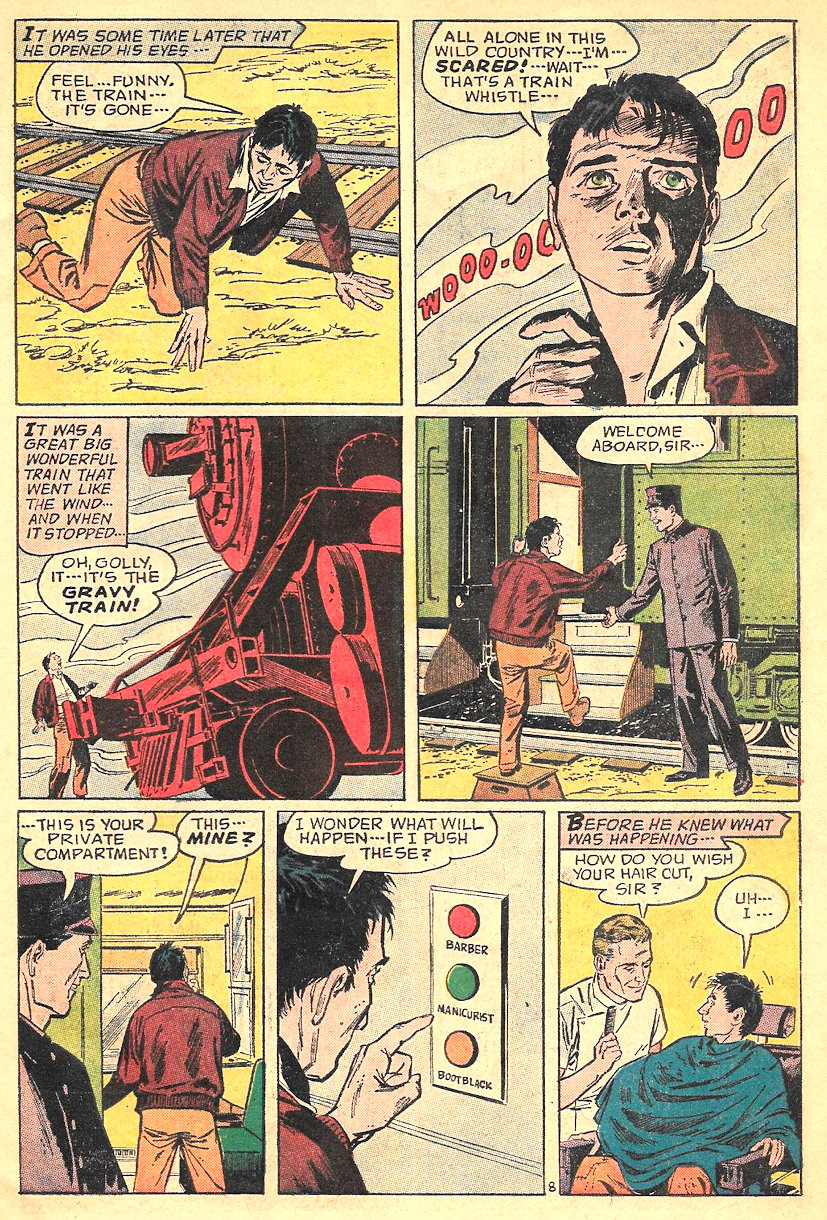 …And of course this is his ticket to heaven, as the bullet proved fatal. Not that Dexter has any cause to complain. His dreams have finally come true. 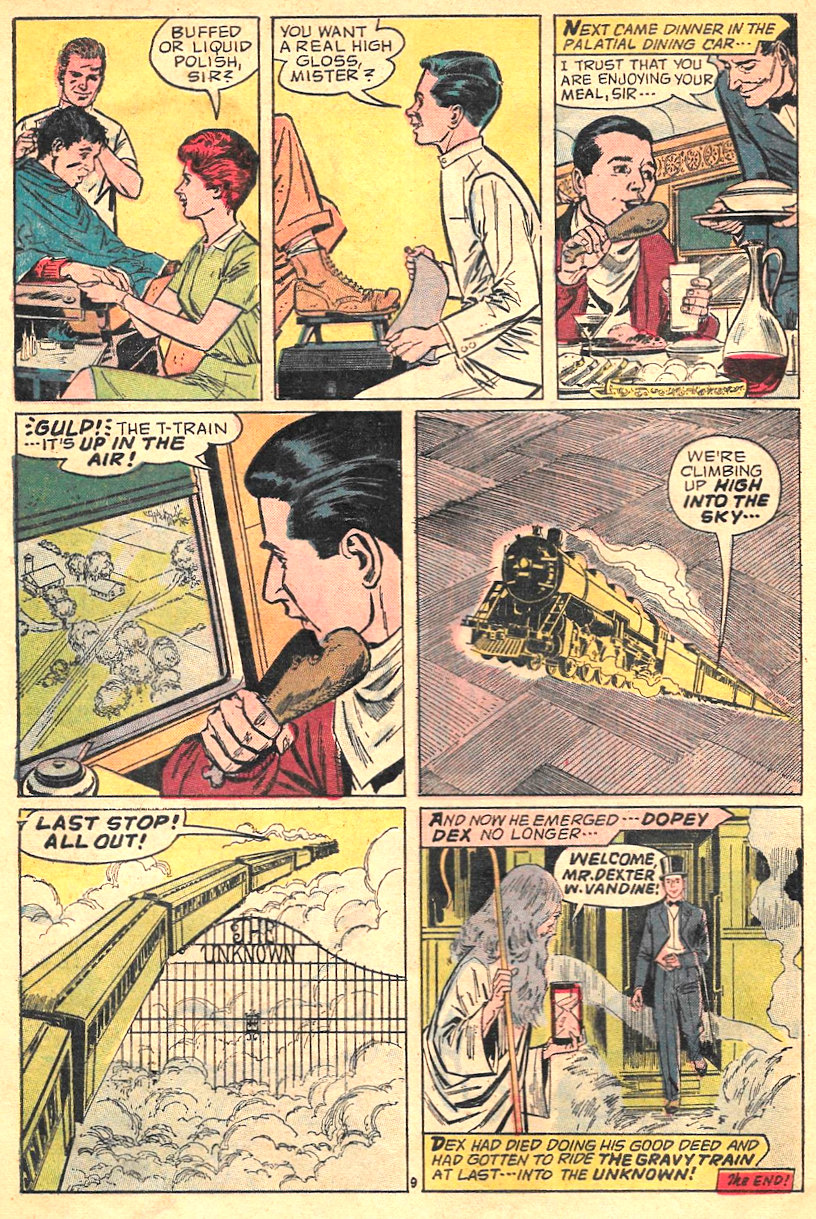 Our next tale takes a sci-fi bent, beginning with a rocketship from Earth arriving to a cheering throng on the alien world Mauricia. 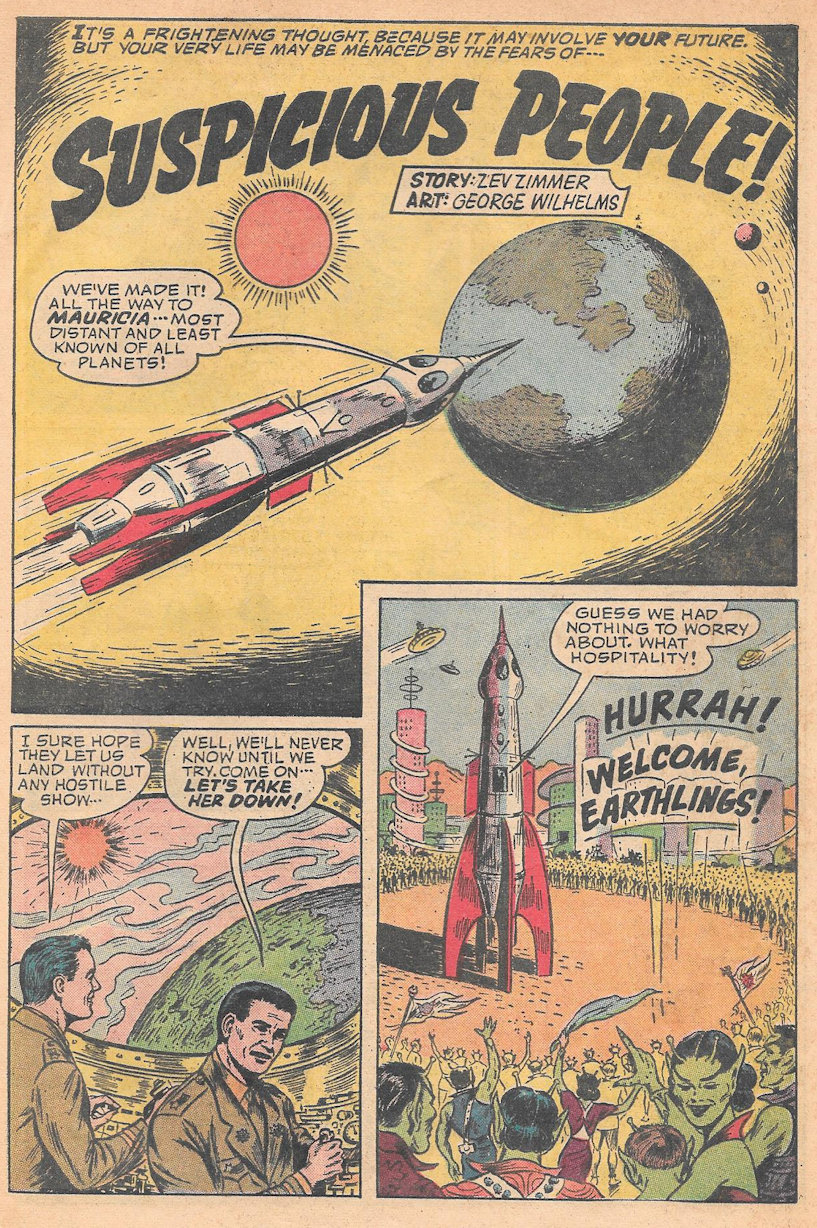 Soon the Mauricians send a delegation of their own to Earth, something that worries the Americans at first, until the realize it is only one ship. Notice that Americans suspicious about aliens is kind of a common theme both in real world and in comics. Here though, they allow the craft to land unmolested, which is a mistake. As soon as they touchdown they release a vaccine! 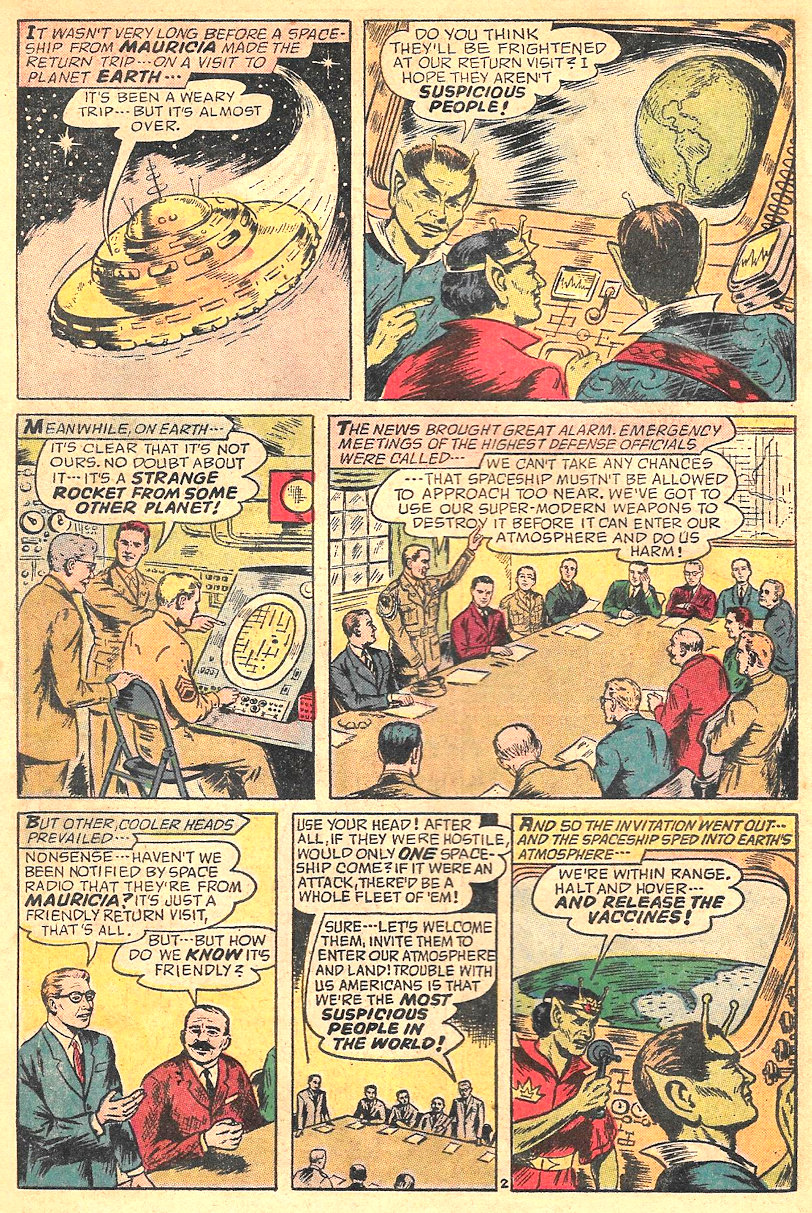 (Note: this is not what a vaccine does) The alien gass causes animals to grow to gigantic size and become obsessed with wiping out humanity. 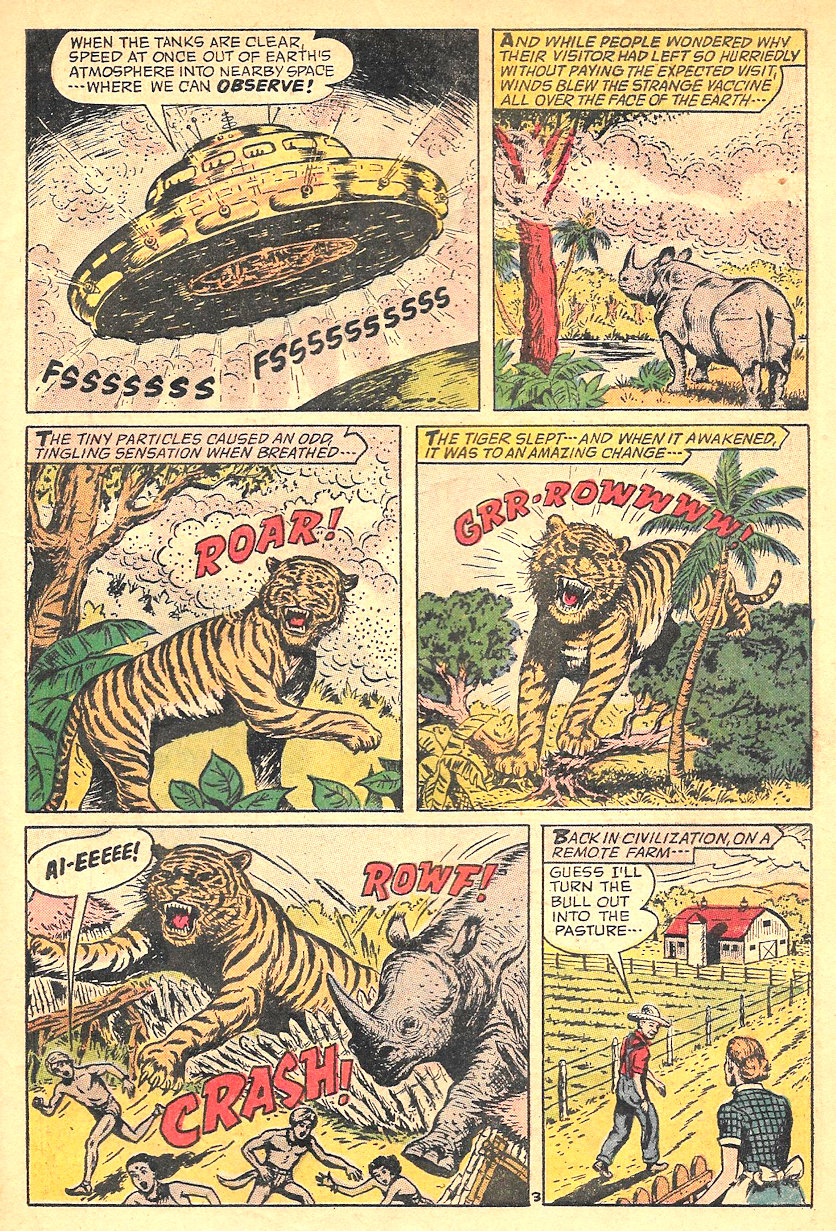 Which they do, toot-sweet, only to then fall victim to their own rapid growth and die off as well. 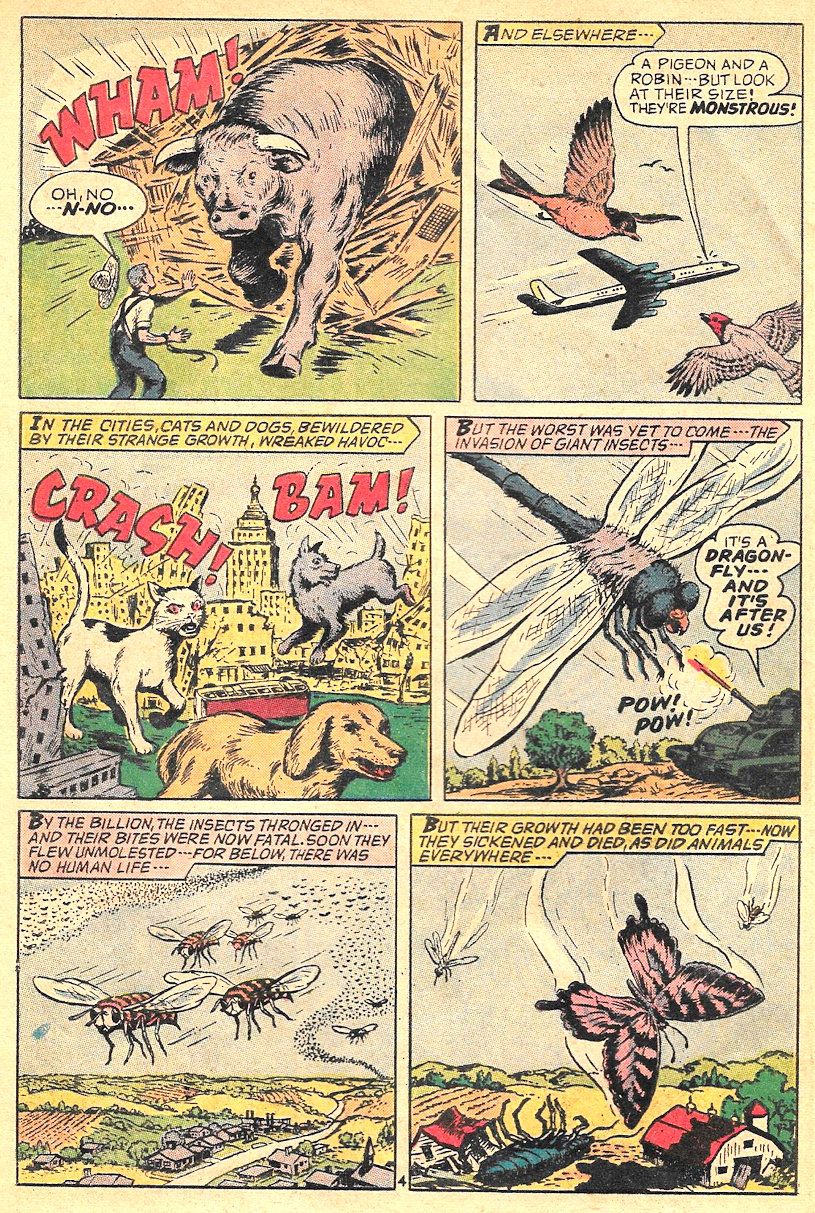 The Mauricians celebrate the death of humanity, brought about by the act of visiting Mauricia and giving them humans to experiment on to prefect their vaccine. The story ends with the Mauricians declaring this was only possible because they are the most suspicious people in the entire universe. 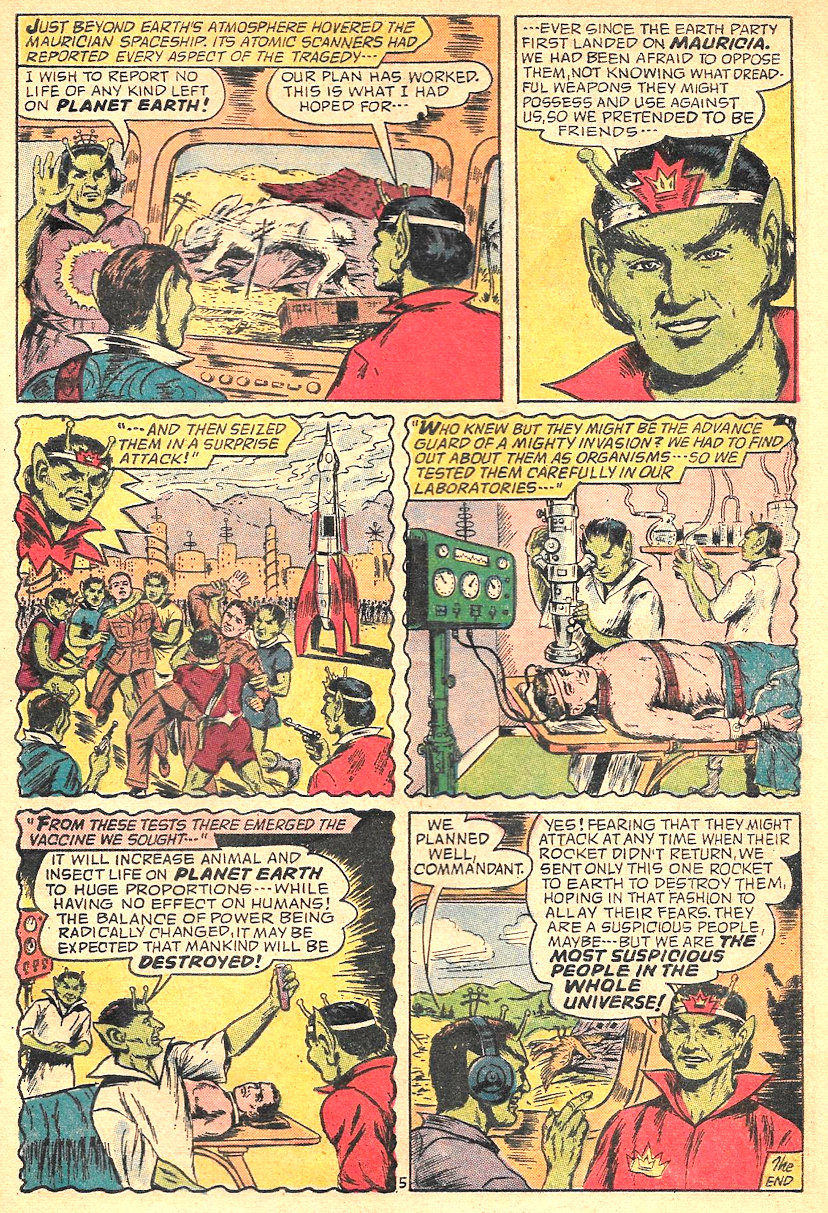 And now a WWII tale about a Nazi submarine, shown here taking down a freighter in the English Channel. 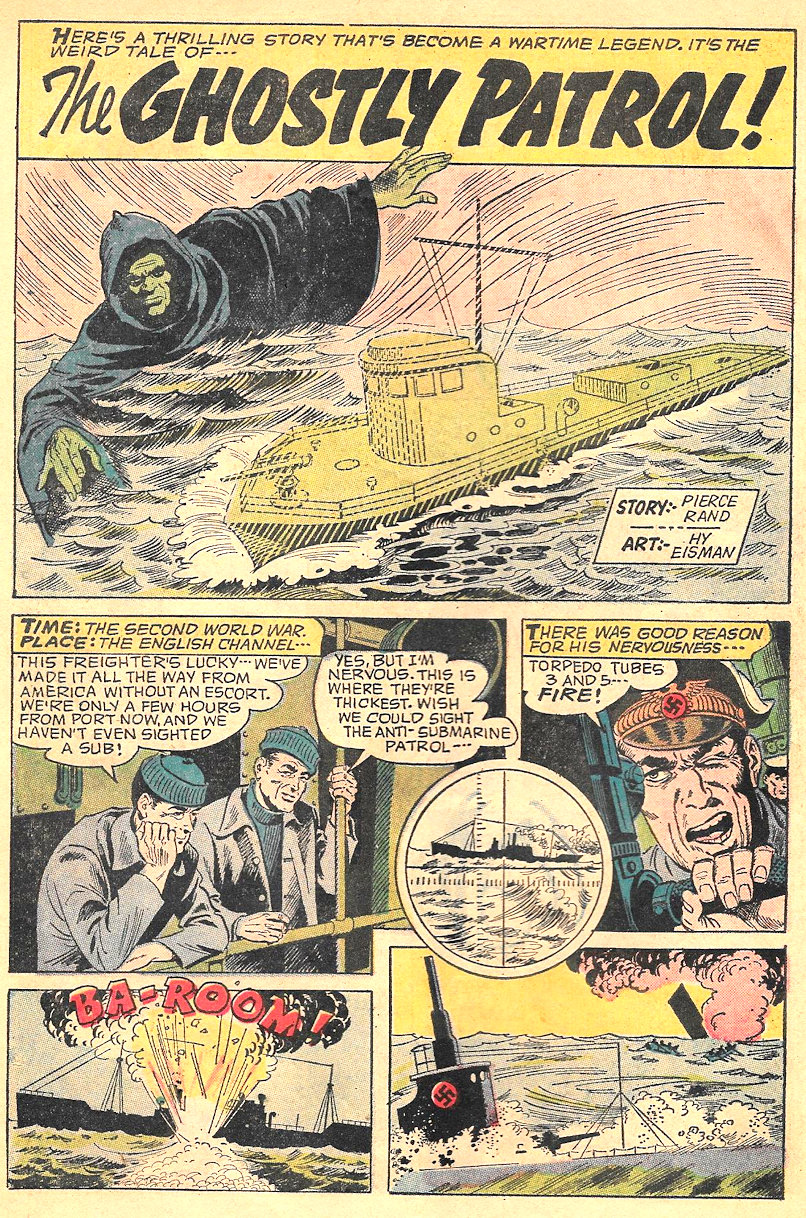 When the u-boat surfaces to strafe the survivors, they find this ghostly craft who has rescued this sole survivor. The semi-transparent comes straight at the German war machine. 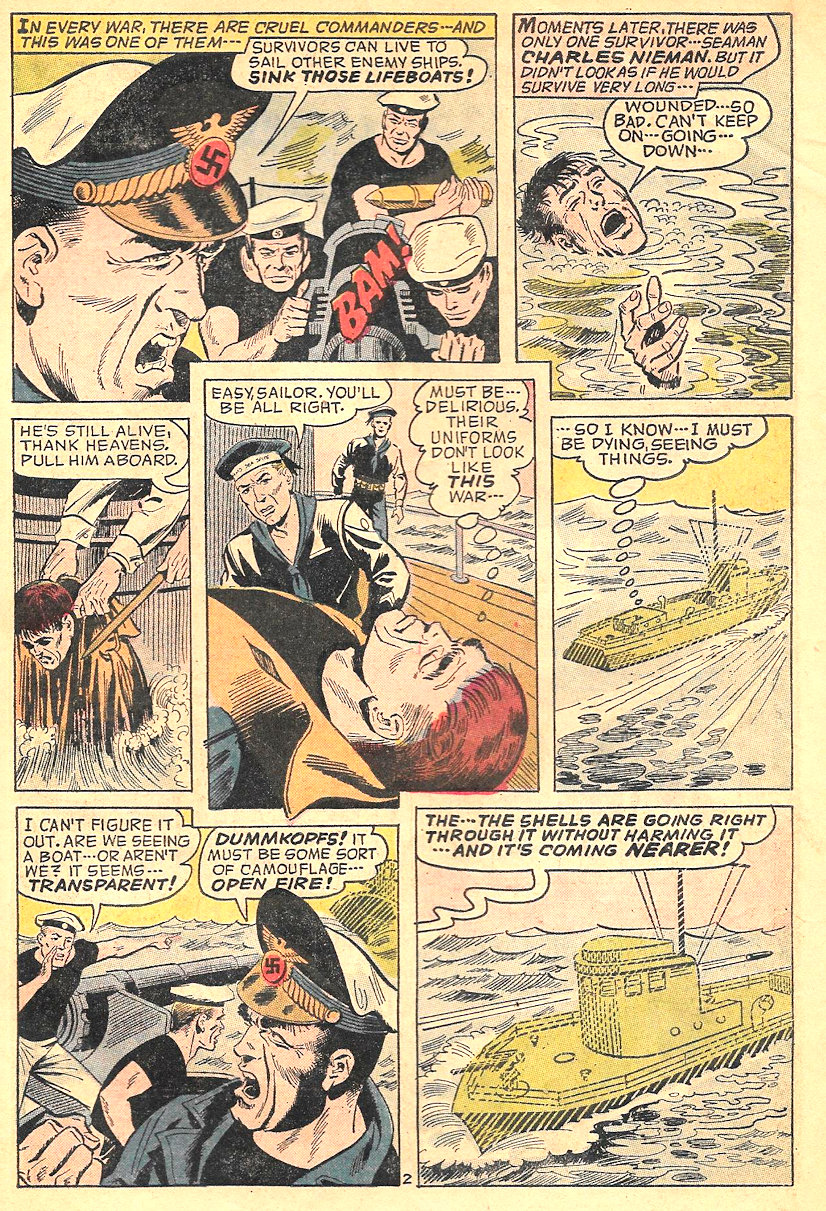 And the craft’s main gun sinks the sub. Later the crewman taken aboard is found adrift by another naval craft. His story doesn’t check out, as “The Sea Spite” was a ship sunk in the first World War. Woooah! 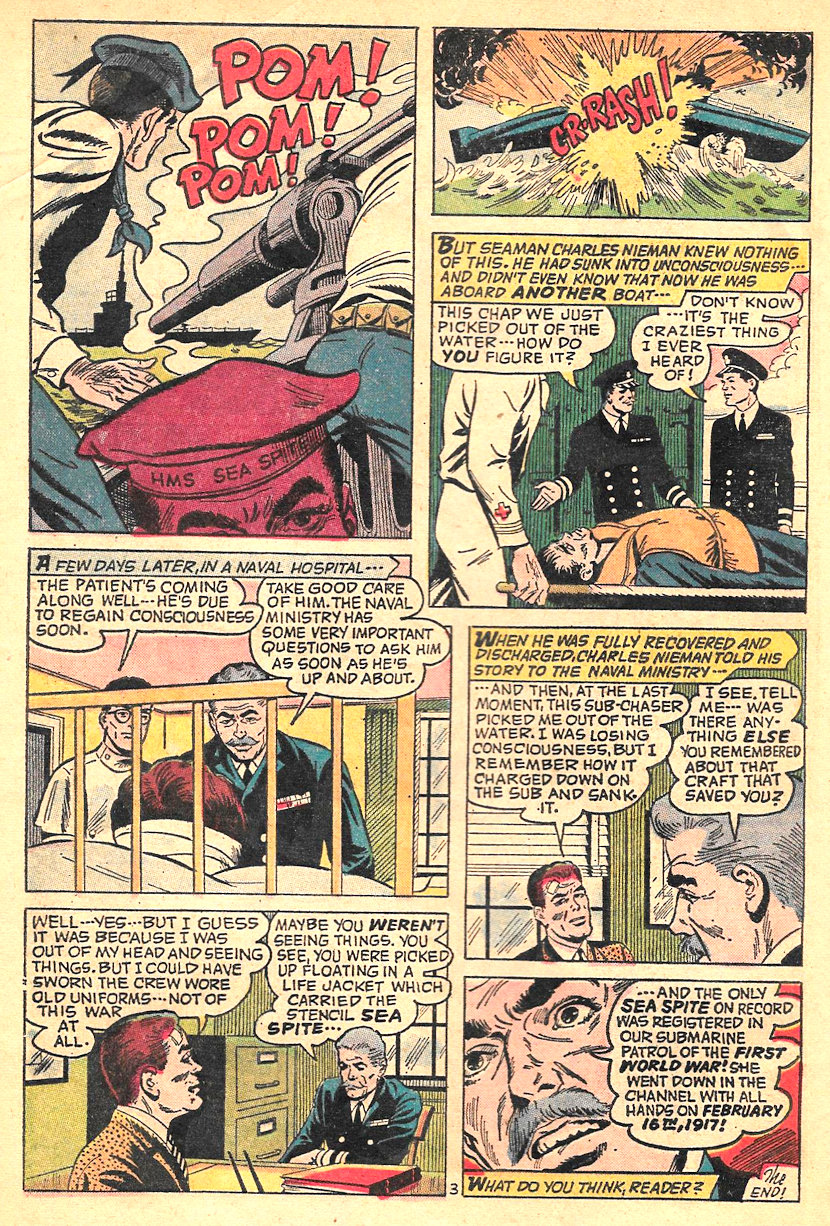 Our final wrap-up tale is this one, with some dynamite art by Pete Costanza. We begin with Davey pestering his uncle about his explorer adventures. 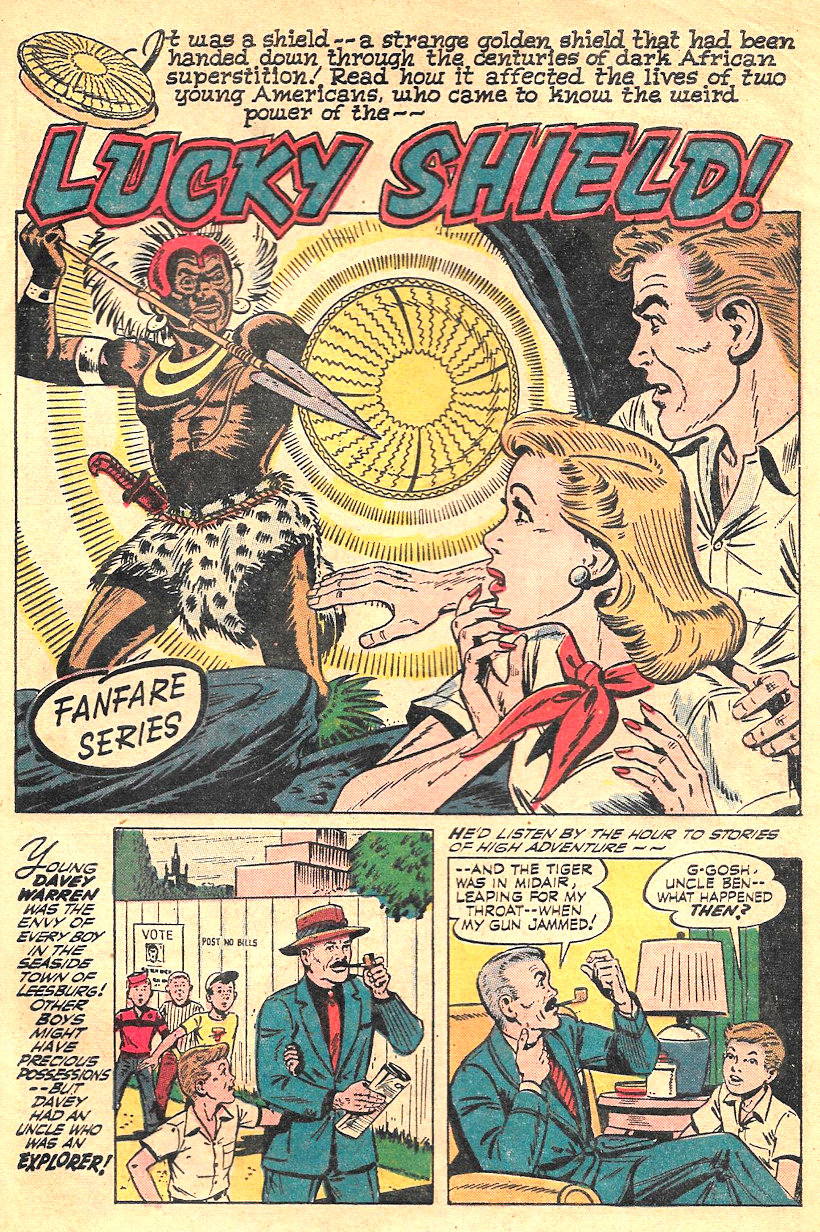 Which unwind into this tale of a shield called Luck of the Zanubis. The Zanubis being an object held with almost religious reverence by a tribe of dangerous warriors in Africa. Davey’s uncle visits them but finds it impossible to be allowed to leave once there. 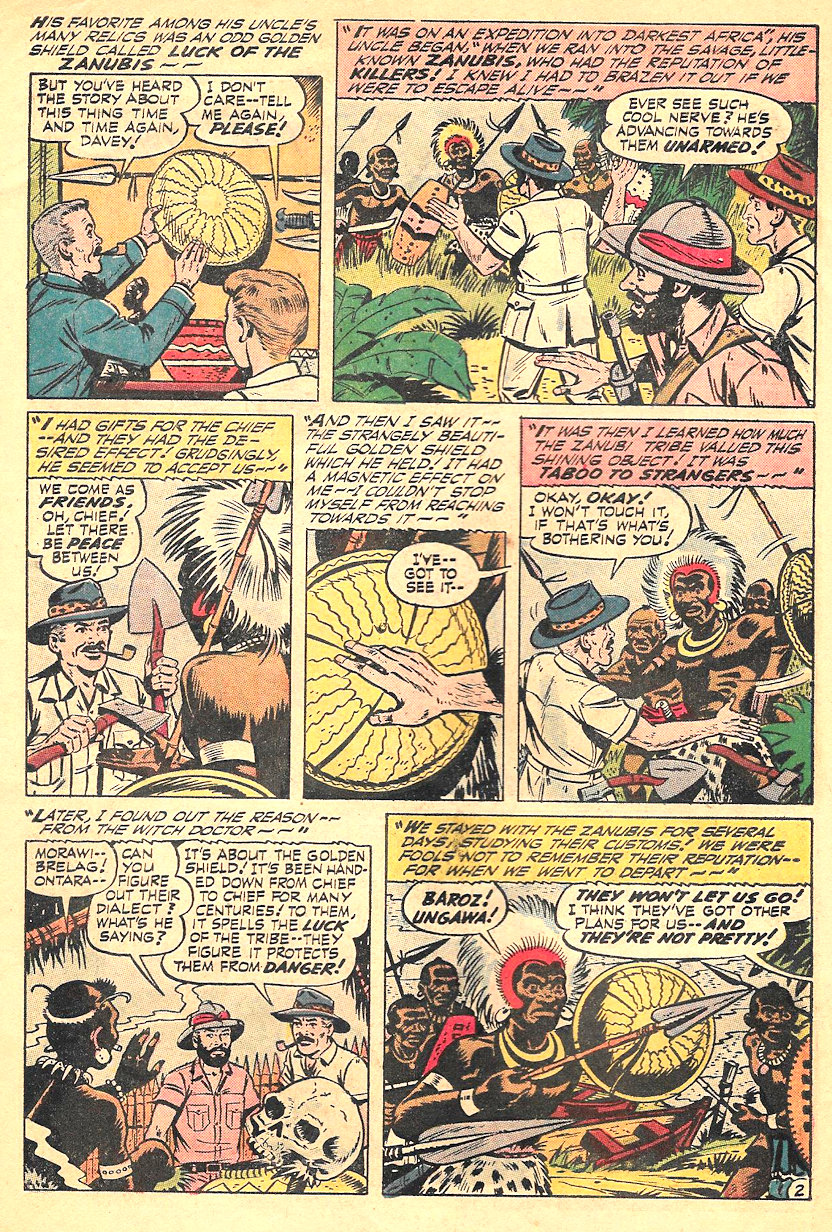 However his uncle disarms the chief and takes the shield from him, using reflective light to blind the tribesmen while they make their escape. Thus the shield saved his life. 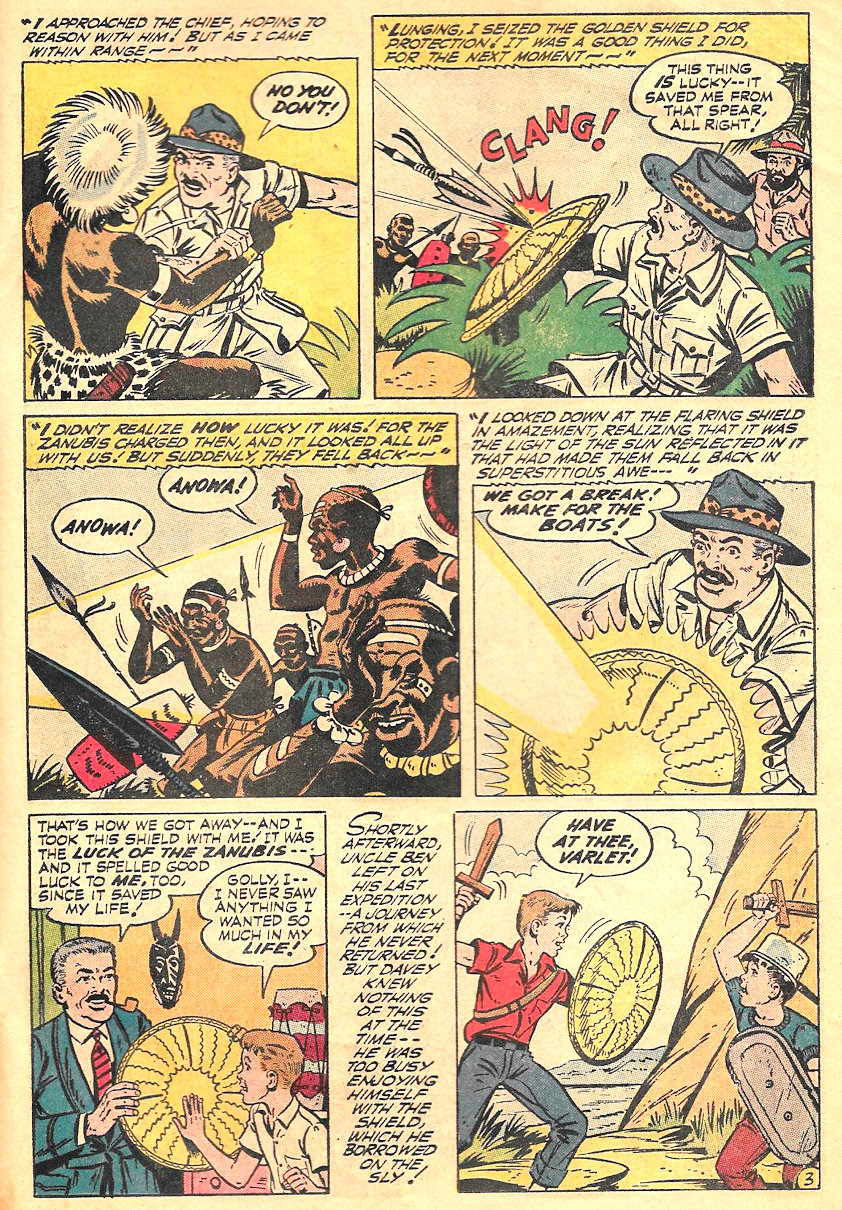 Davey borrows the shield to play with (because he’s a bit of a precocious shit) and loses it somewhere in the sea caves around his hometown. From there he grows up to live an unremarkable life, regretting that he lost his own personal luck when he lost the shield. 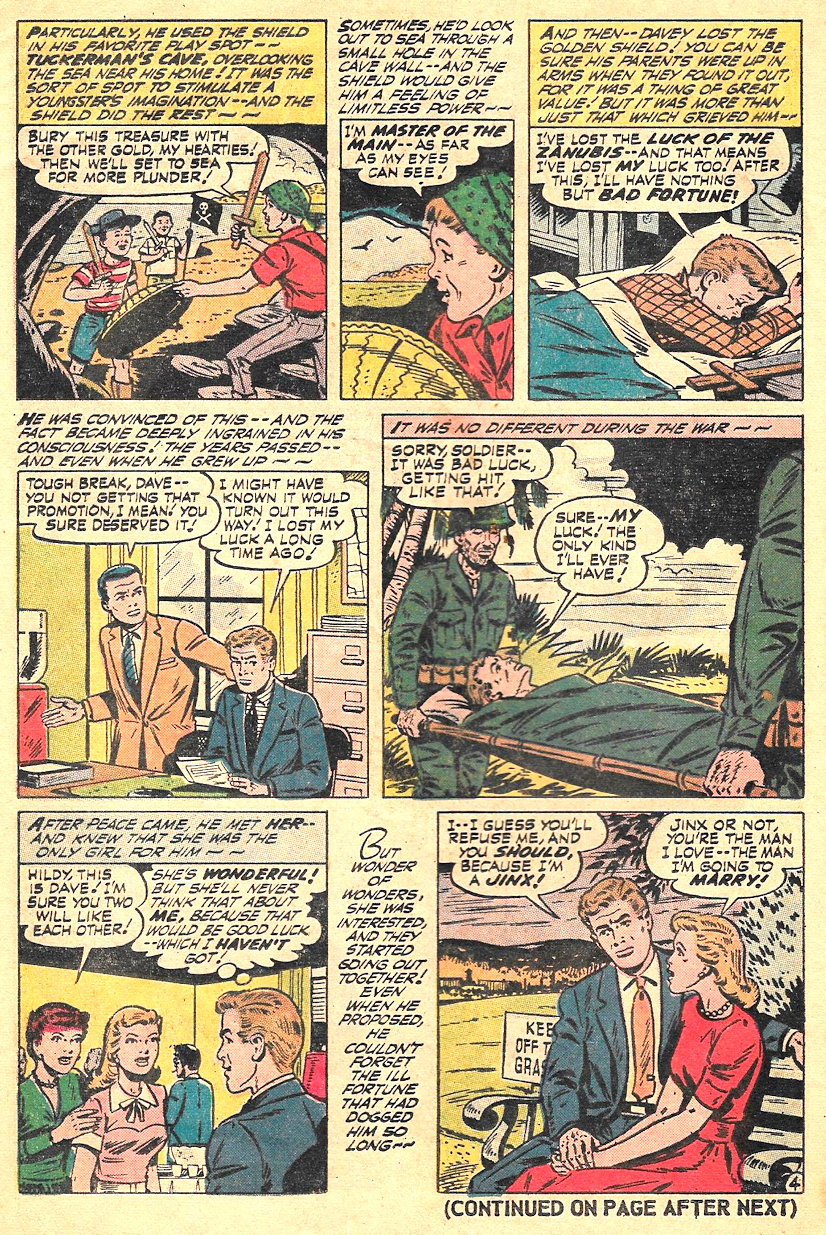 His one redeeming moment is Hildy consenting to be his girlfriend. She has him show her all the places he used to play as a kid on a lark one afternoon… 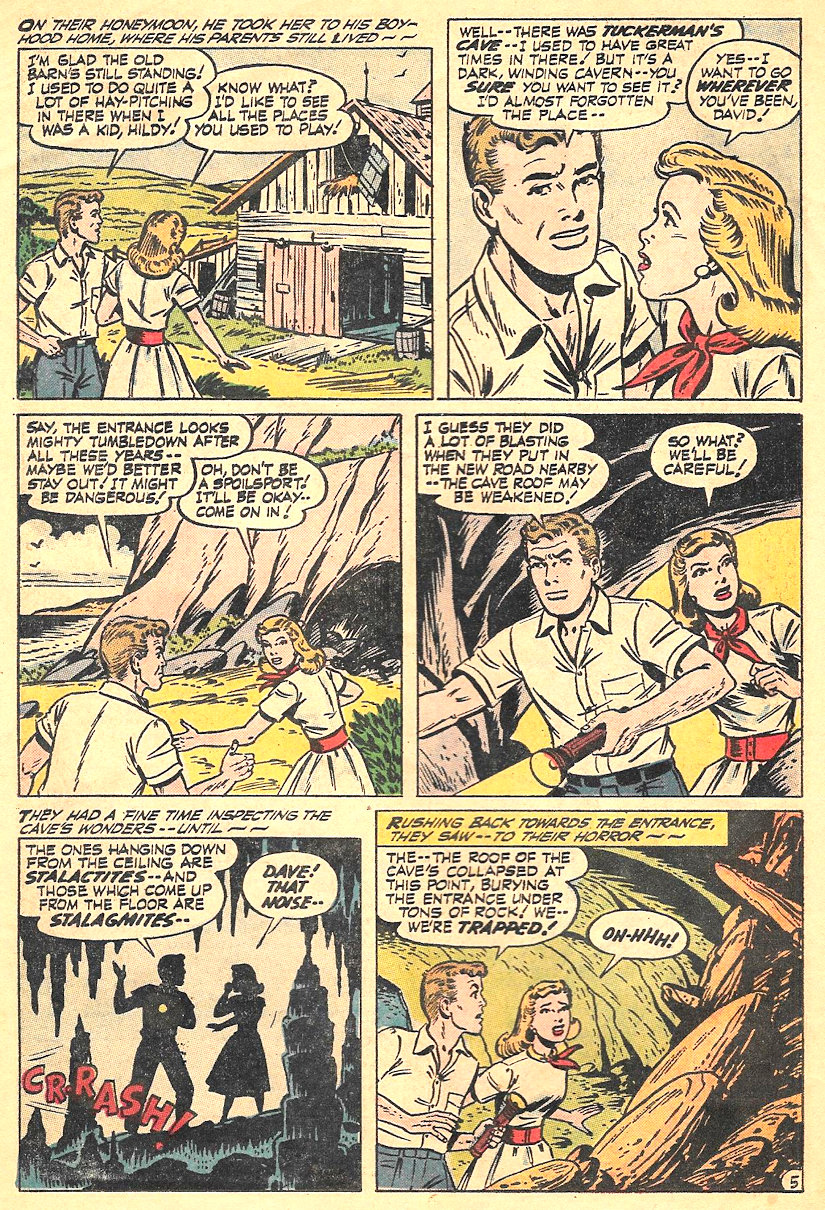 …which leads to them getting lost in the caves. However, a bright light shines in while they sleep forming into the ghost of Davey’s uncle, who makes an arrow out of stones pointing to… 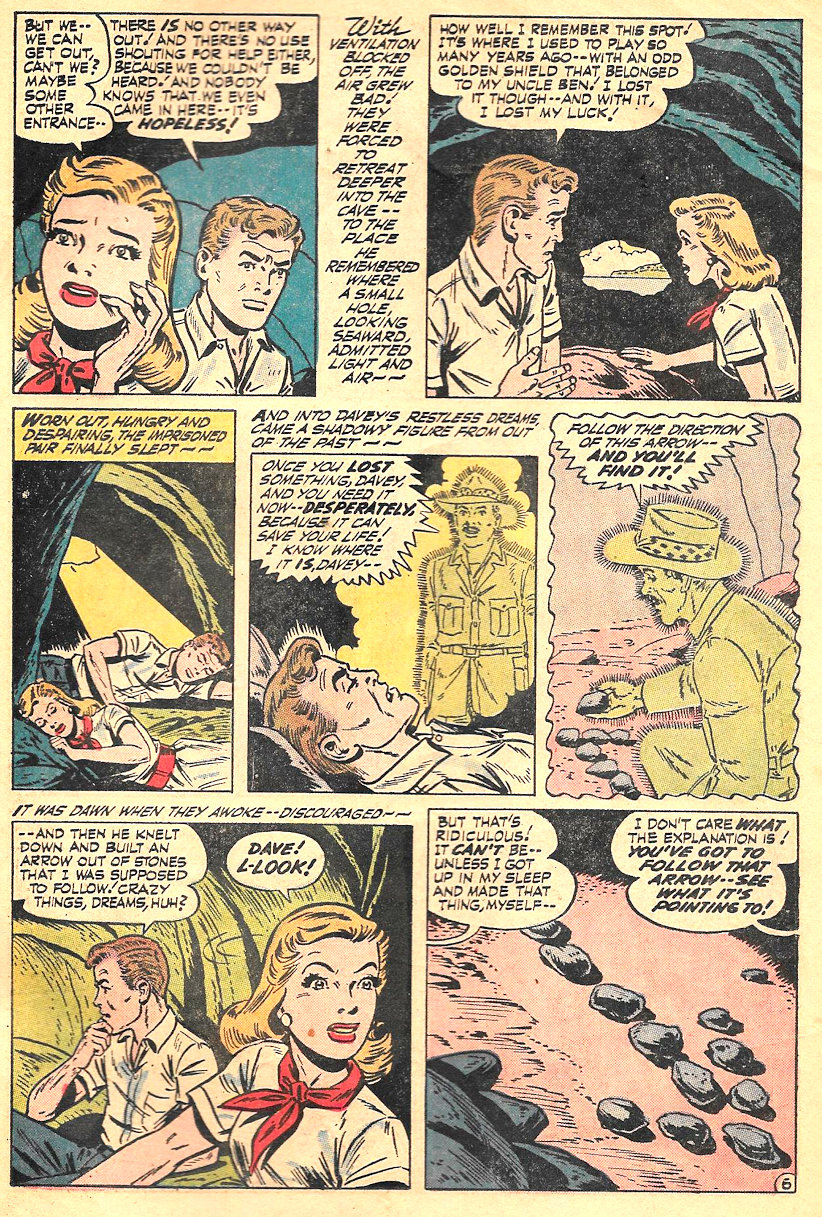 …the shield, hidden in the dirt. Hildy shines it up and they use it to reflect light toward some fishermen… 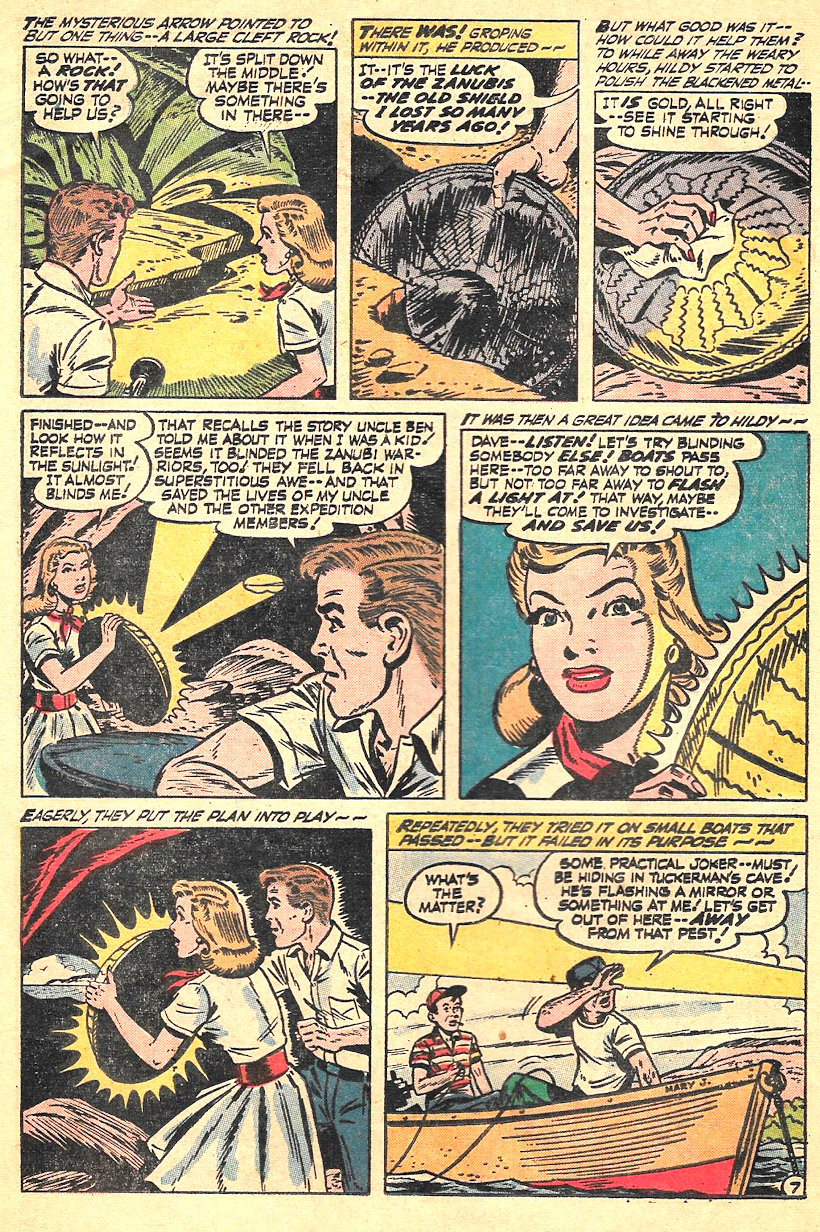 …who ignore them…and then to a captain of a patrol boat, who swoops in to rescue the pair. Yay! Now don’t be a shit, Davey, and lose things. 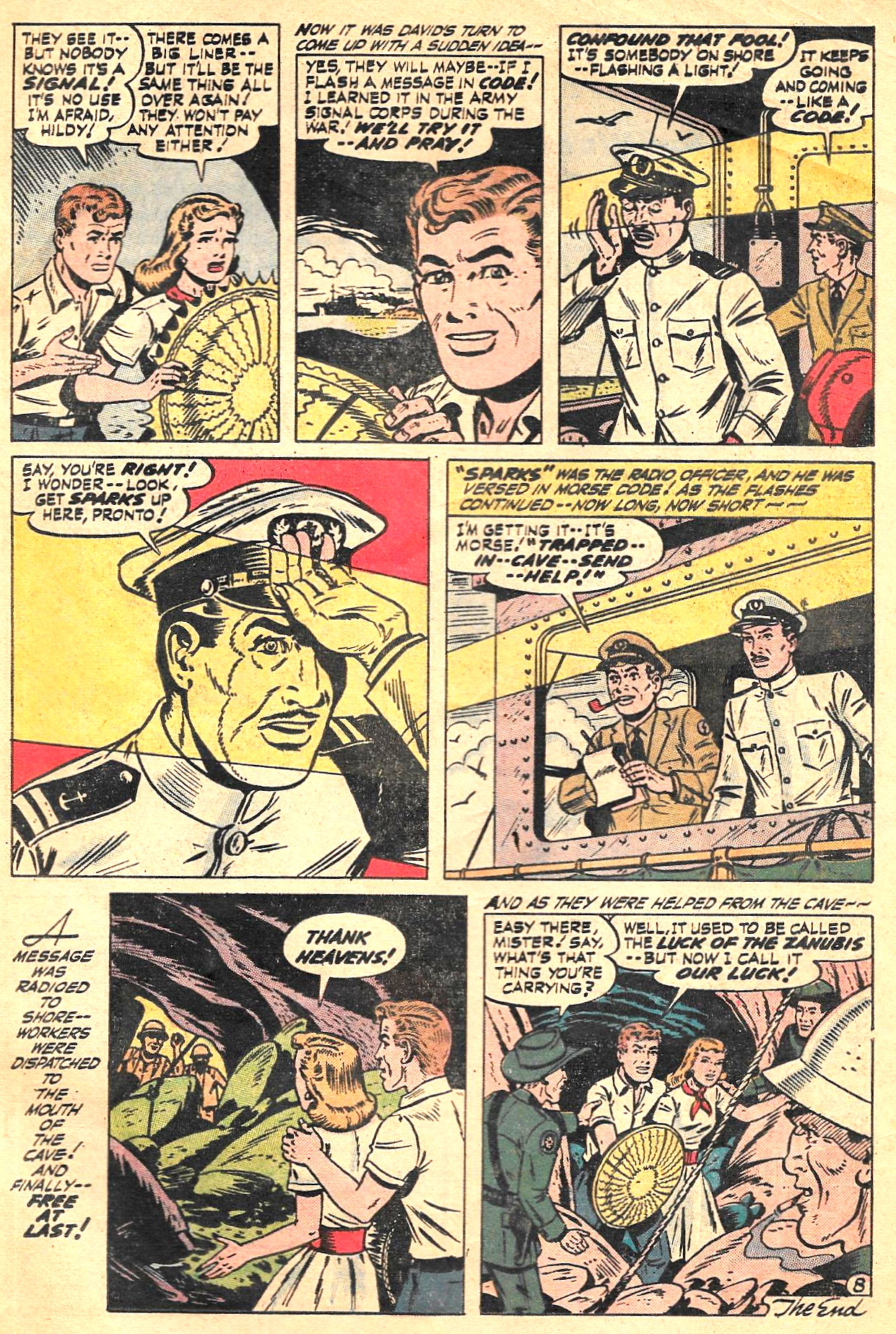 In all, these are diverting and a good value for the money. I certainly will keep my eye out for more of them, if ever I stumble upon them.

Posted by SonOfCthulhu at 2:10 AM