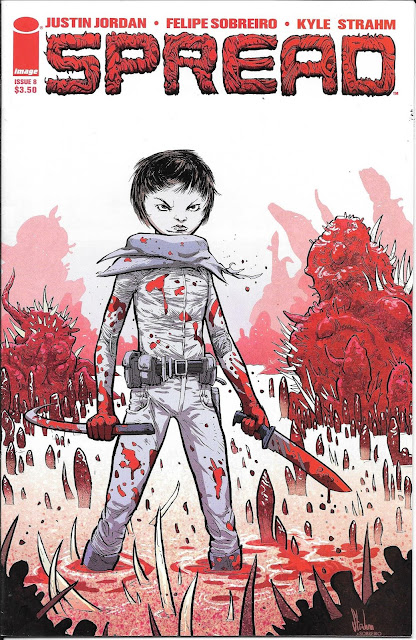 At least we don’t live in THIS type of pandemic

Spread is a very confusing book if you start at issue number 8.

It LOOKS impressive and I love the idea of a dystopian world filled with infectious blood-red gas spore thingies that turn people into goo-monsters…And I mean that in a purely STORY-WISE sense 2020!! No infectious gas spore things for November, You HEAR!

But I don’t know plot-wise what the heck is going on nor why. I’m skimming the wiki, fandom, and old review sites to get back up to speed on this. Give me a moment…

That got me most of the way there. So the spread is a virus we unleashed on humanity accidentally. It appears to be an infection that turns people into ravenous red tentacle monsters, some of whom float around like balloons. That’s the “eventually” stage though. After infection, they kind of ‘thing out” at random it appears. Gory gross horror concept.

Into this carnage comes “Hope,” a baby with the ability of killing spread monsters on contact. She is found by No, who ends up transporting her across the remains of a shattered civilization in an area called the Quarantine Zone. Unlike Lord of the Rings, I have no idea where their Mount Doom is, but apparently the hope of all humanity rests on No getting the child to someplace where the spread can be destroyed.

The art for this issue was drawn by Kyle Strahm. Further in it appears that production delays or some such had them flip artists to John Bivens. I can’t comment on the Biven’s side of the series, but Strahm’s work is outstanding. To mix things up, the color pallet provided by Felipe Sobreiro is so unique and stark that it makes the book a delight. His neutrals, use of white space, and abundance of red-to-pink hues makes the book feel like it literally drips blood. And given that the story is about a deadly infection, it gives another layer to handling an issue. Makes me want some latex gloves if not a full on hazmat suit.

And if you are suited up, lets dive into this…but be forewarned: It’s gross and the characters do not make any sense at the moment because I don’t have a prior issue starting point.

We begin with this young girl running from lord knows what through the forest. She trips… 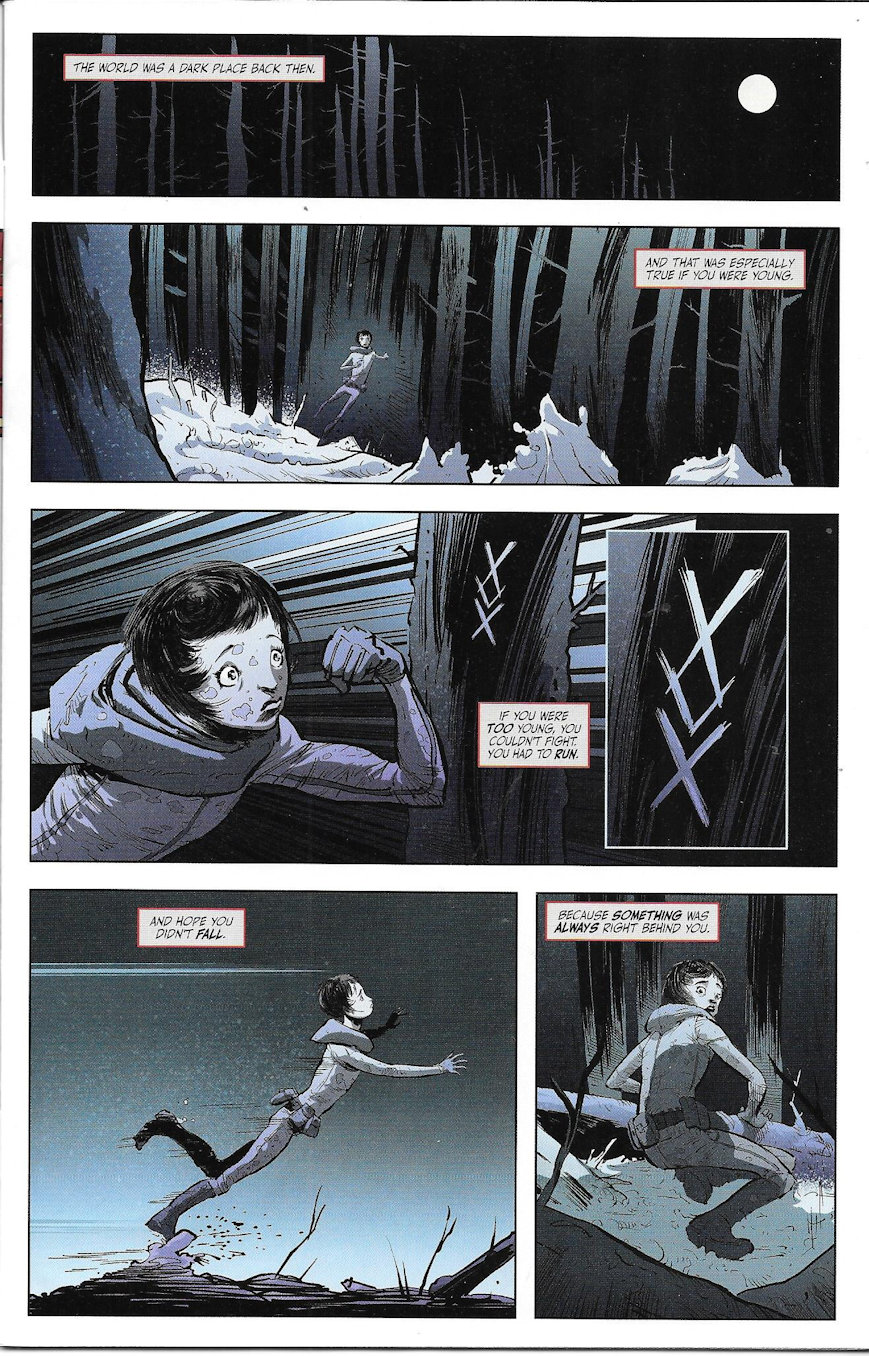 And is we find her attacker is some brutish oaf in Black Water duds. However, the girl’s fall was planned, and this is an ambush. An ambush by children who hold him down with the mute girl slashes his throat. Welcome to the apocalypse, everyone. It’s as bad as we thought it would be. 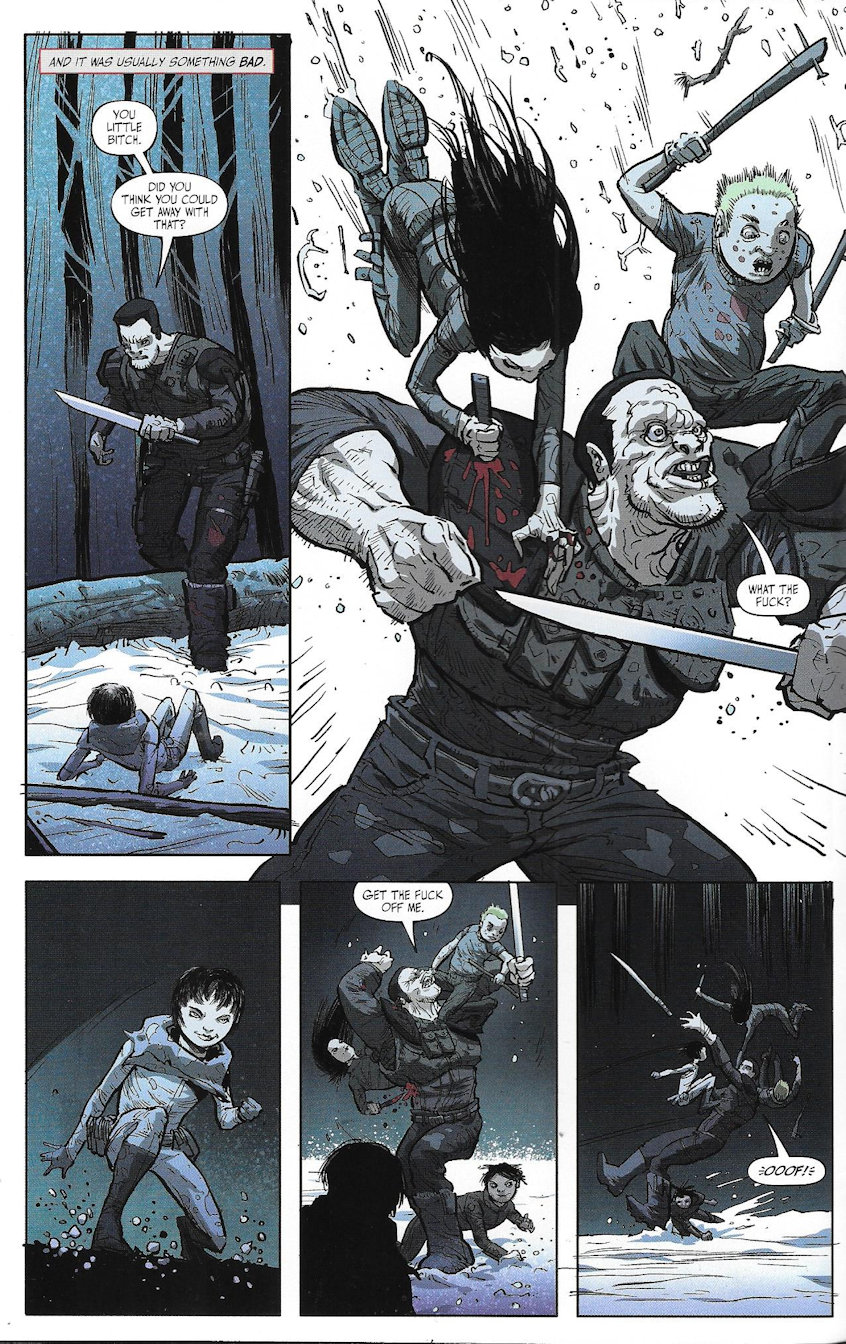 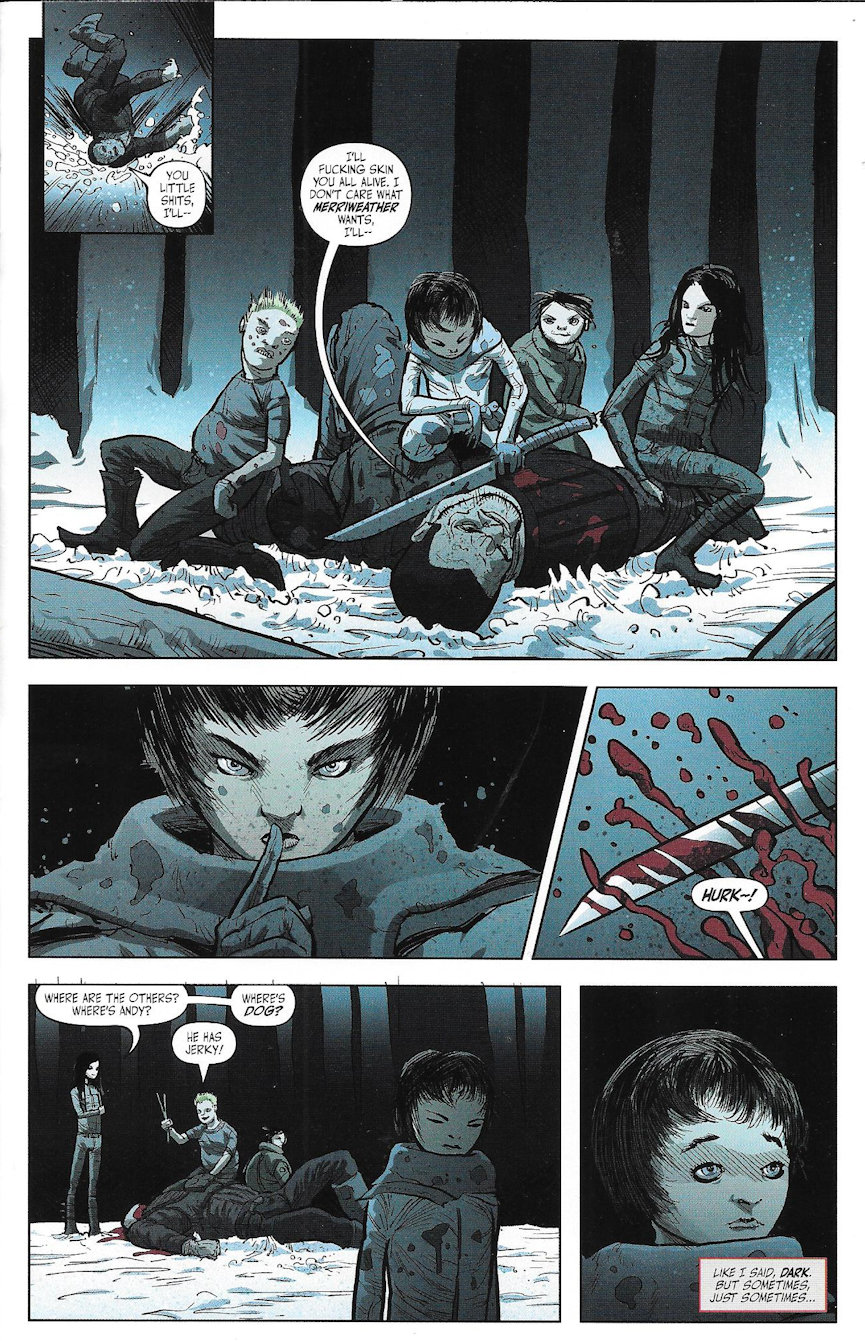 The scene shifts to a one-eyed black man, tending a fire. He speaks to the darkness around him in an “I see you there, come out” kind of manner. And the girl steps out, sword drawn. 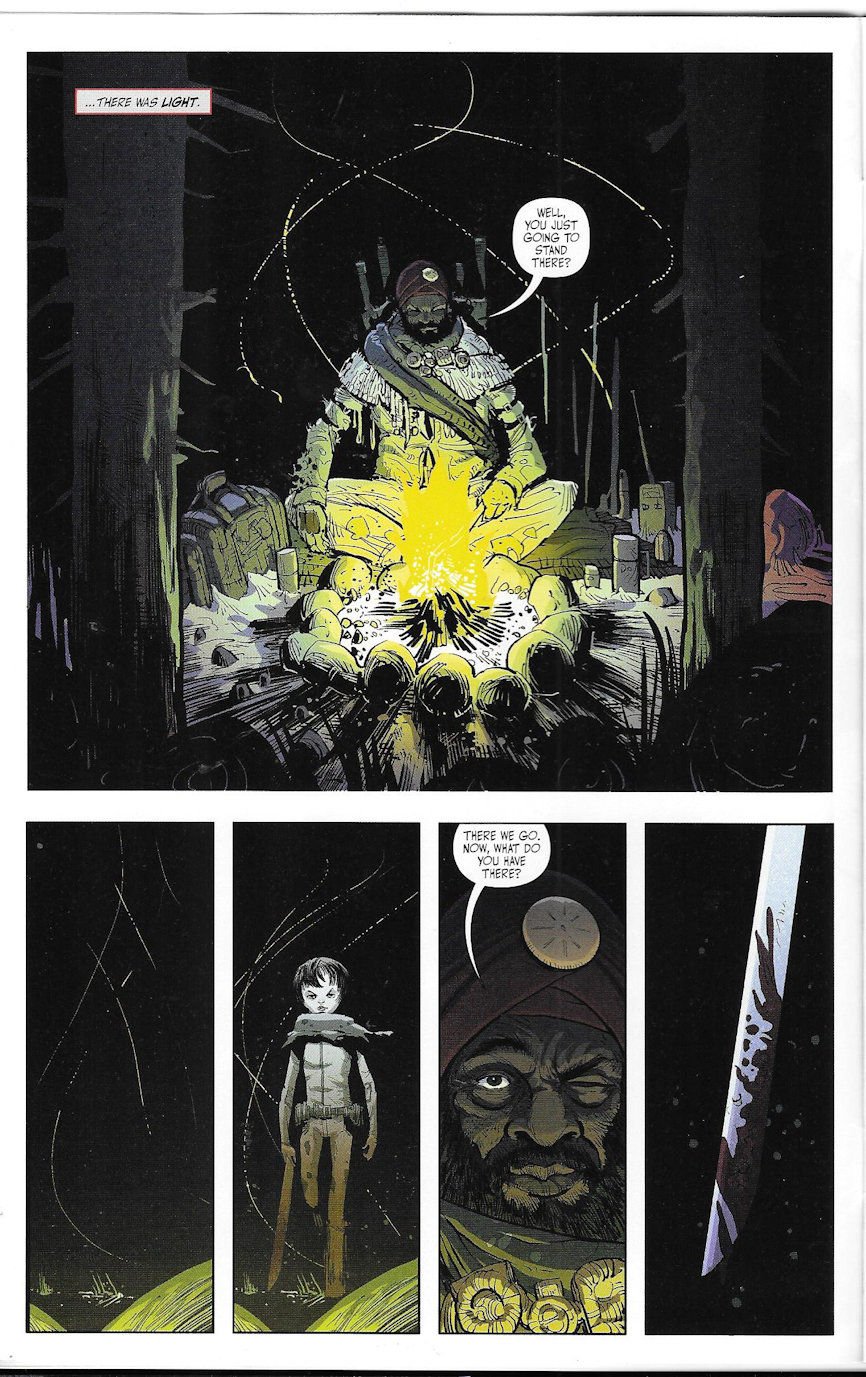 But this isn’t a deadly encounter. This is the elder of her post-society tribe and she is reporting back. We learn her name is Vox and that this group has fallen on hard times. There were eight kids in total that went out and only five have returned. Their enemies were slavers, according to Vox… 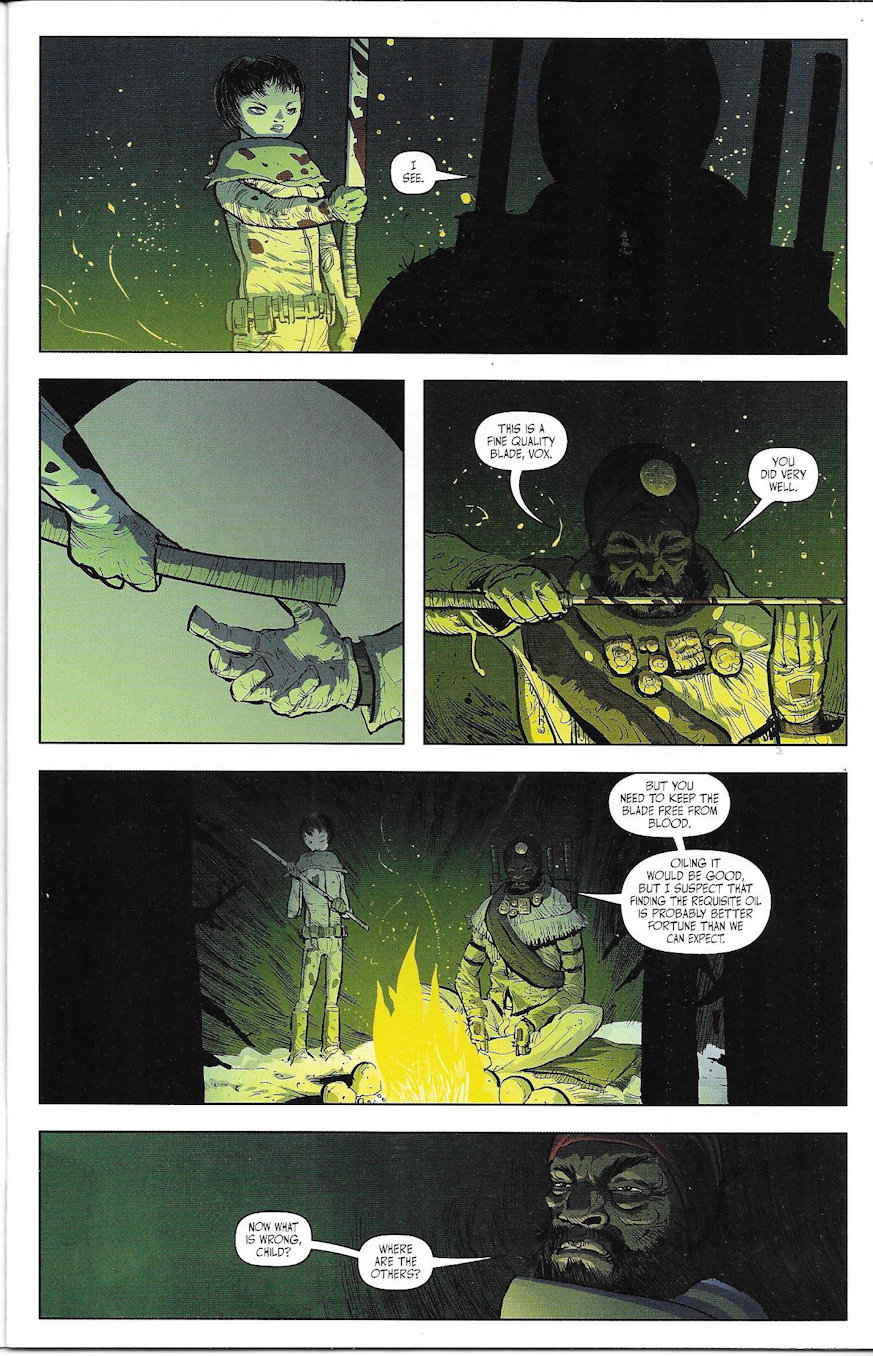 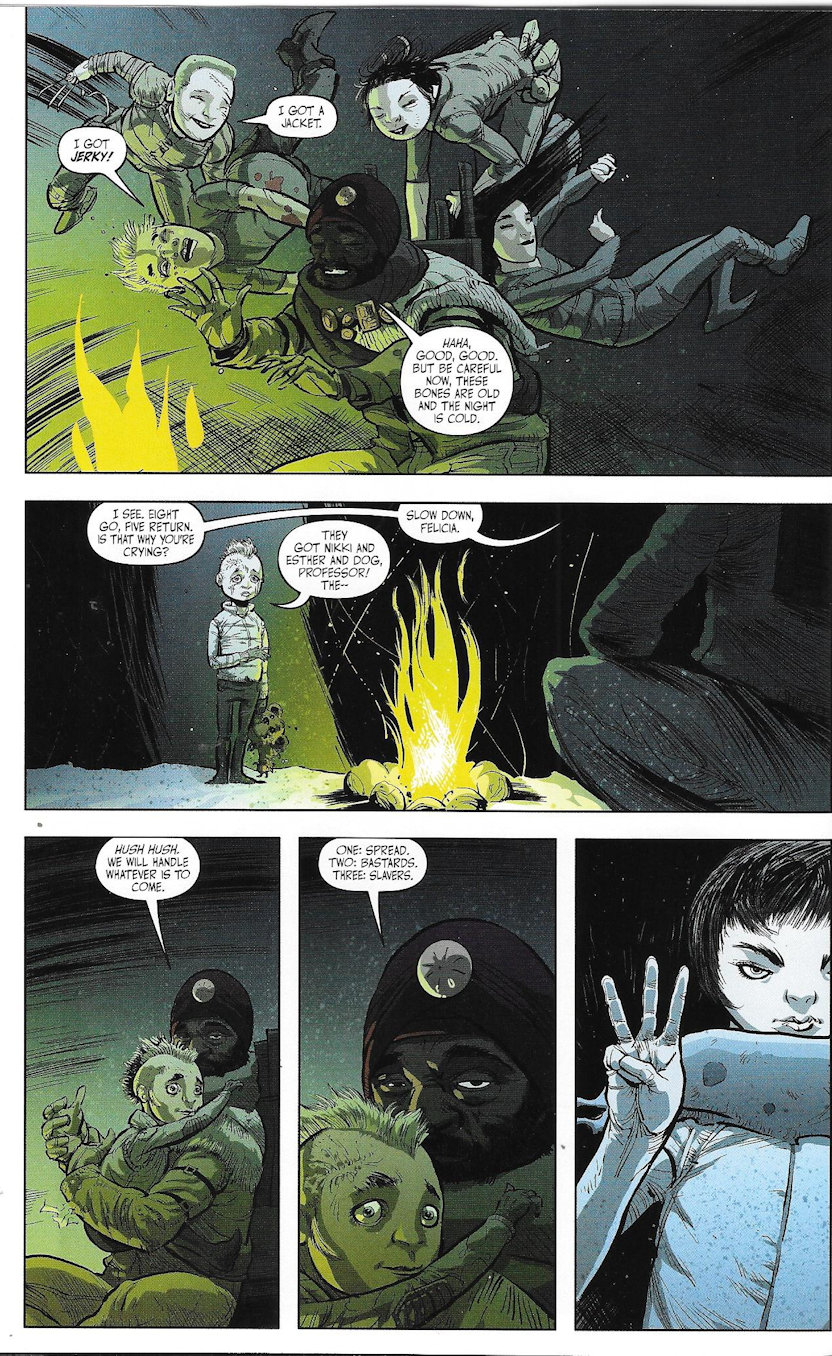 …and there are more of them. Vox know where they are, though, however that is for another time. The tribe settles down for a story from their father-figure, and we move on from this scene. 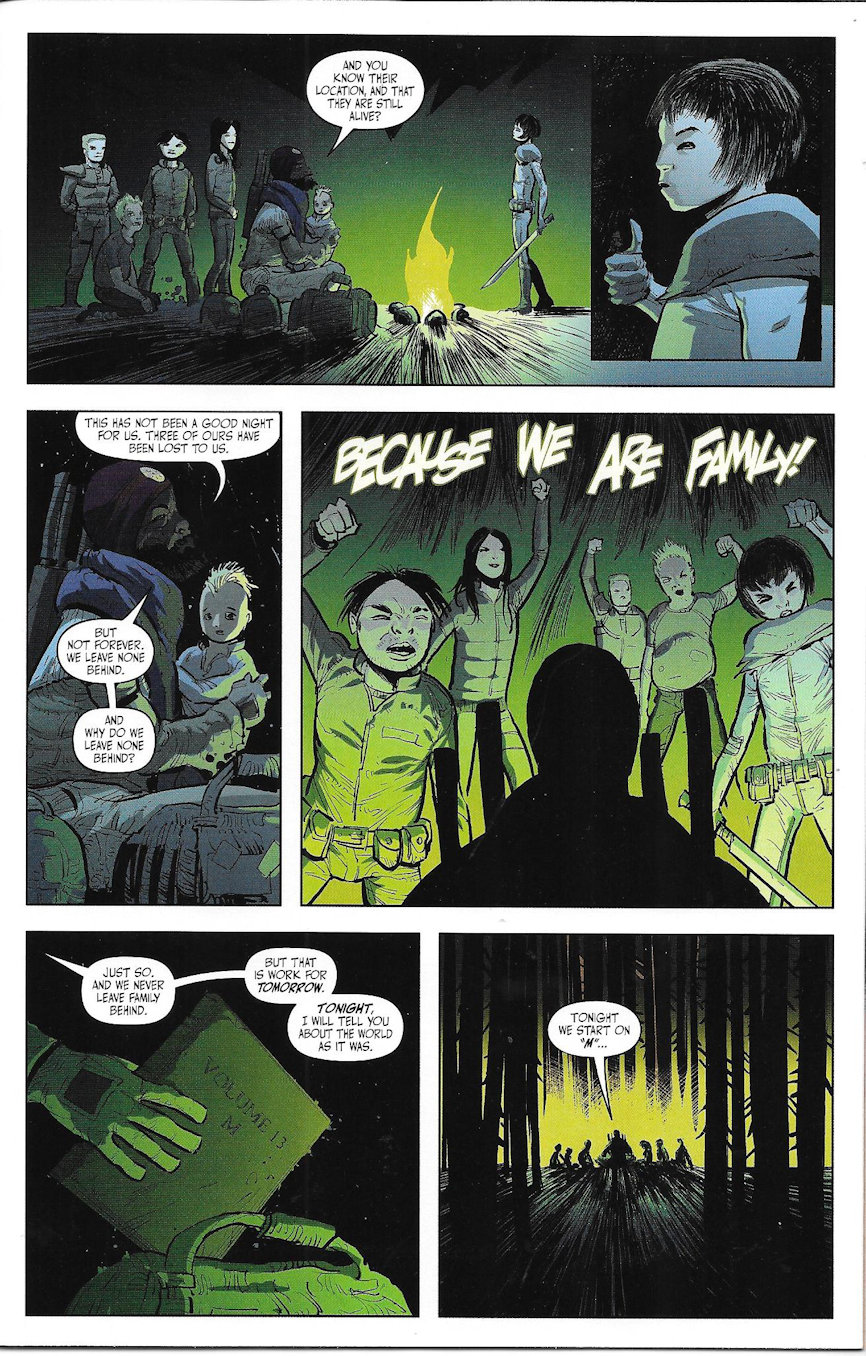 Where we end up is with No sitting beside someone called Billy…make that someone-formerly-called-Billy. No’s friend goes all John Carpenter on us and No looks donefore… 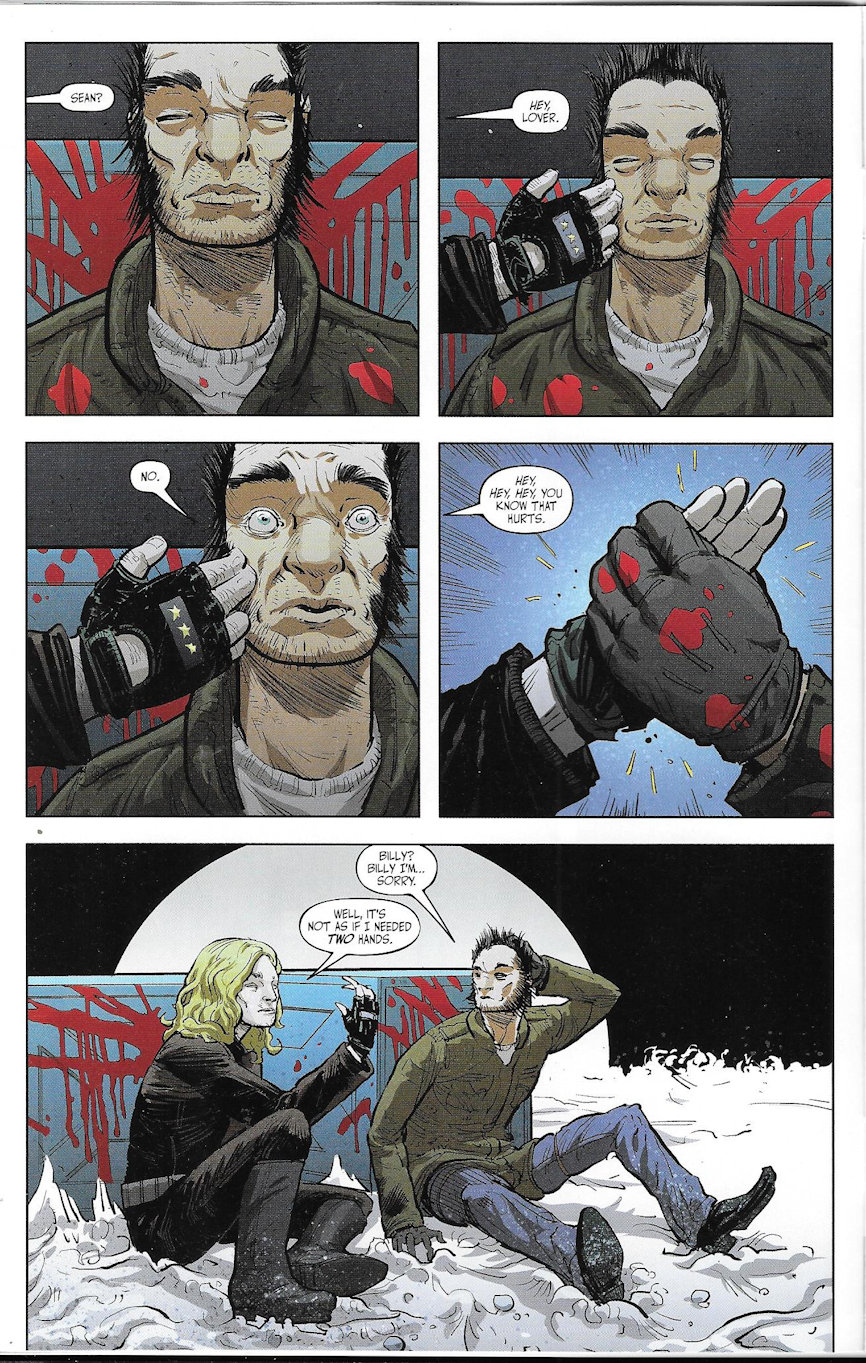 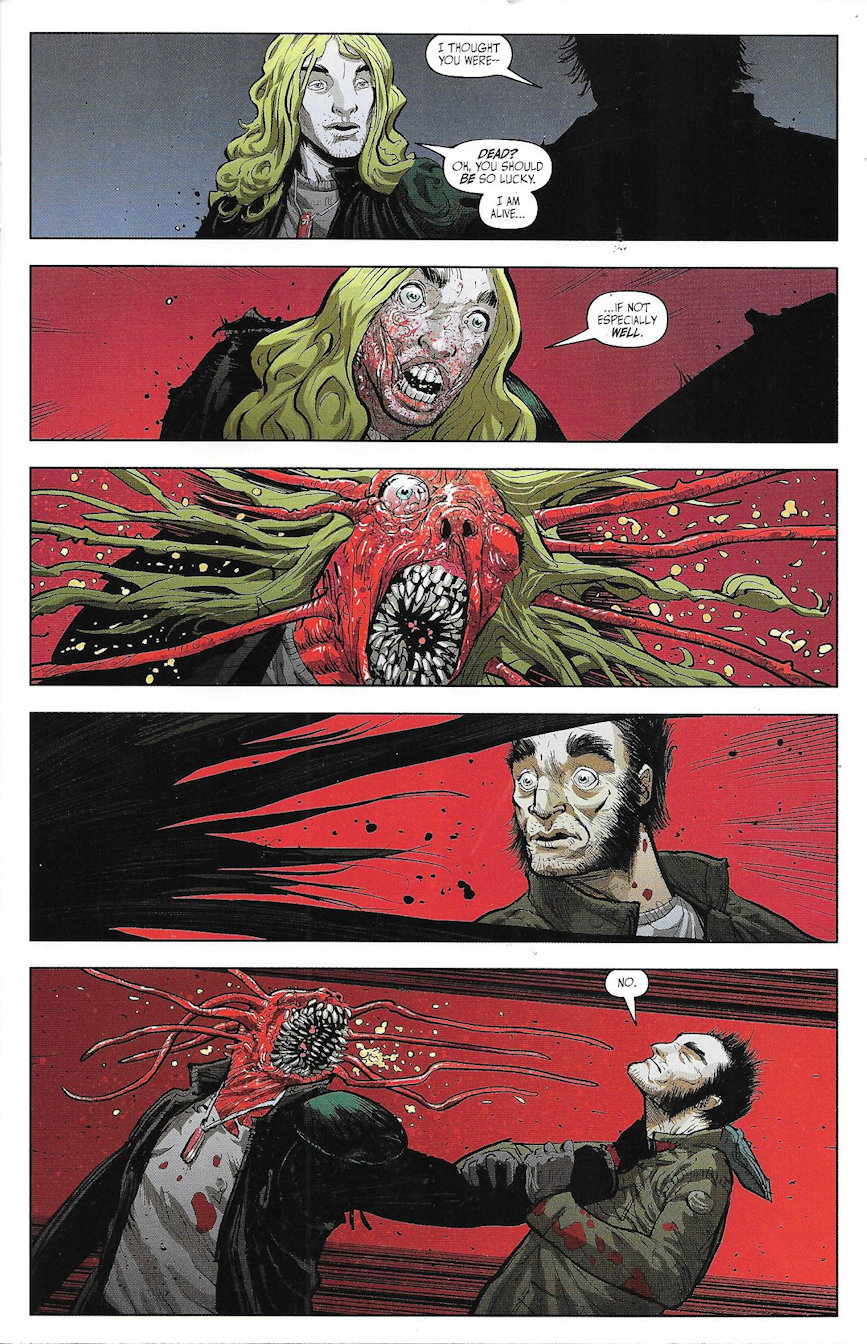 Turn the page and we find that No is sick with a raging infection and is having delusional dreams. These two companions are looking out for him while No’s fever breaks…if it ever does. No is “spread immune” which I suppose means he won’t turn into one of the tentacle horrors if injured by them, but he isn’t immune to common bacteria. And he’s in bad shape. 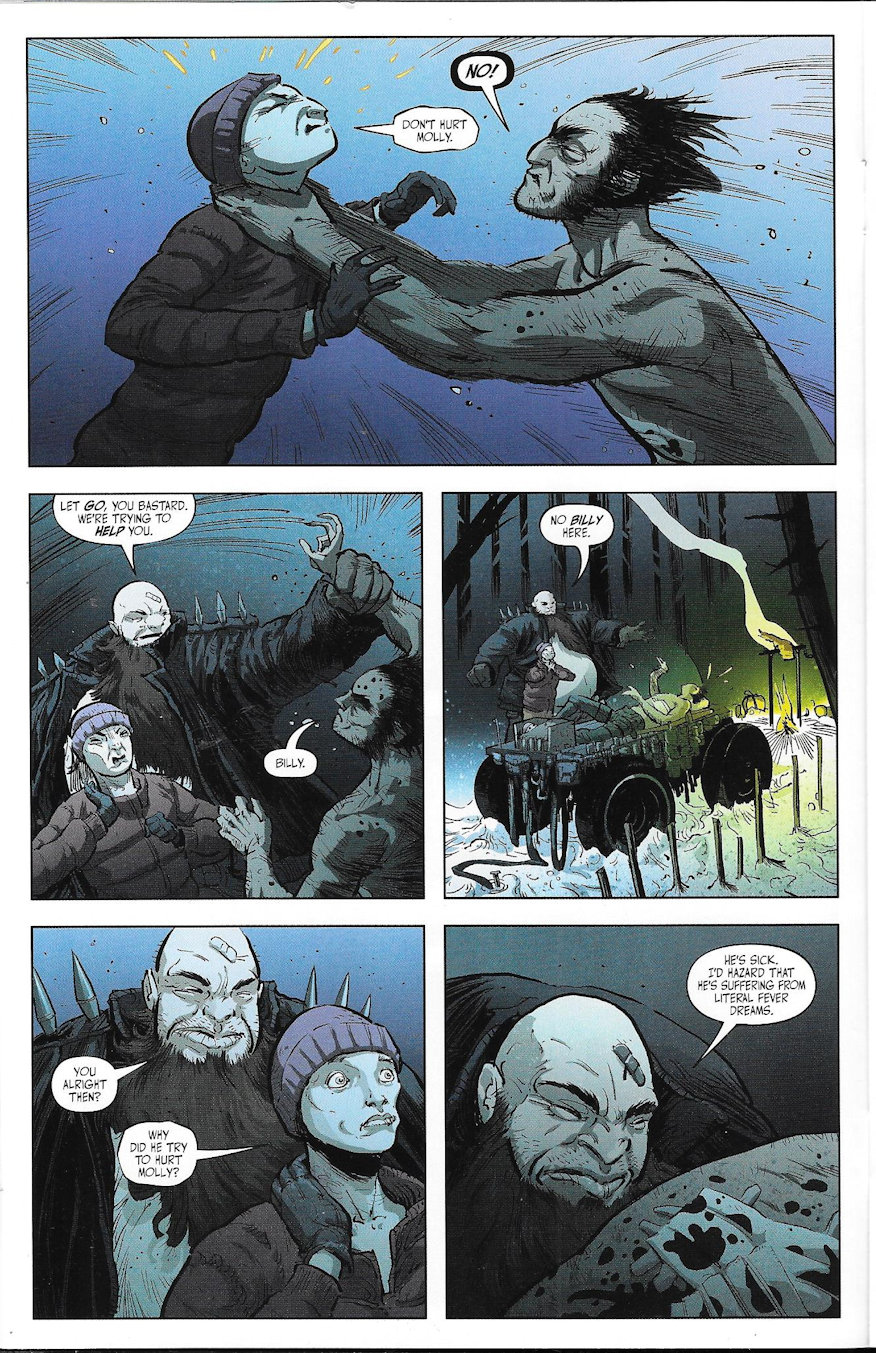 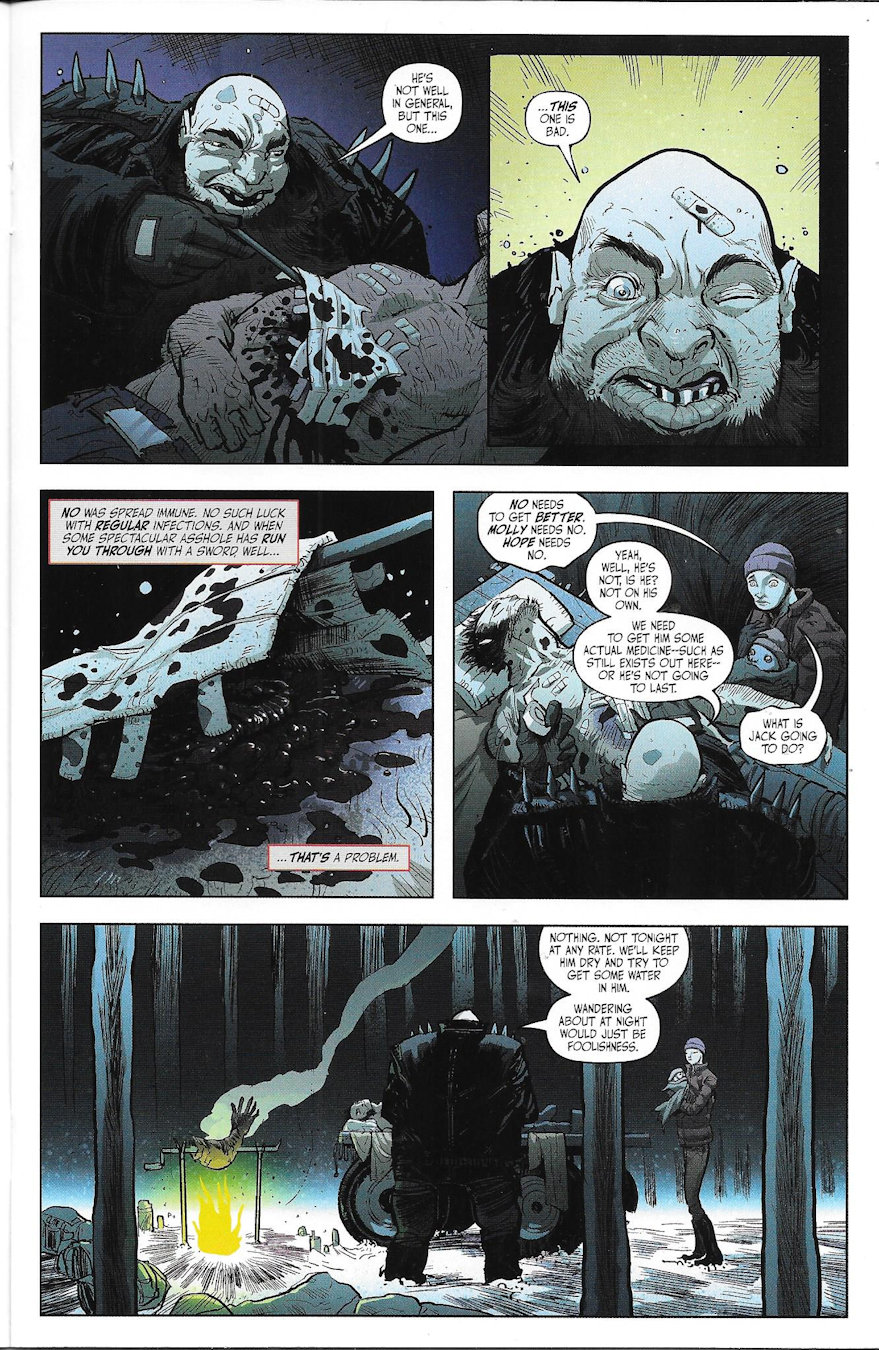 Note that the two are cooking an arm. What is the “good” part of a human arm, I wonder? Probably the bicep.

Next day, our pair is dragging No out of the forest, while being surveilled by Vox and her band of child-warriors. 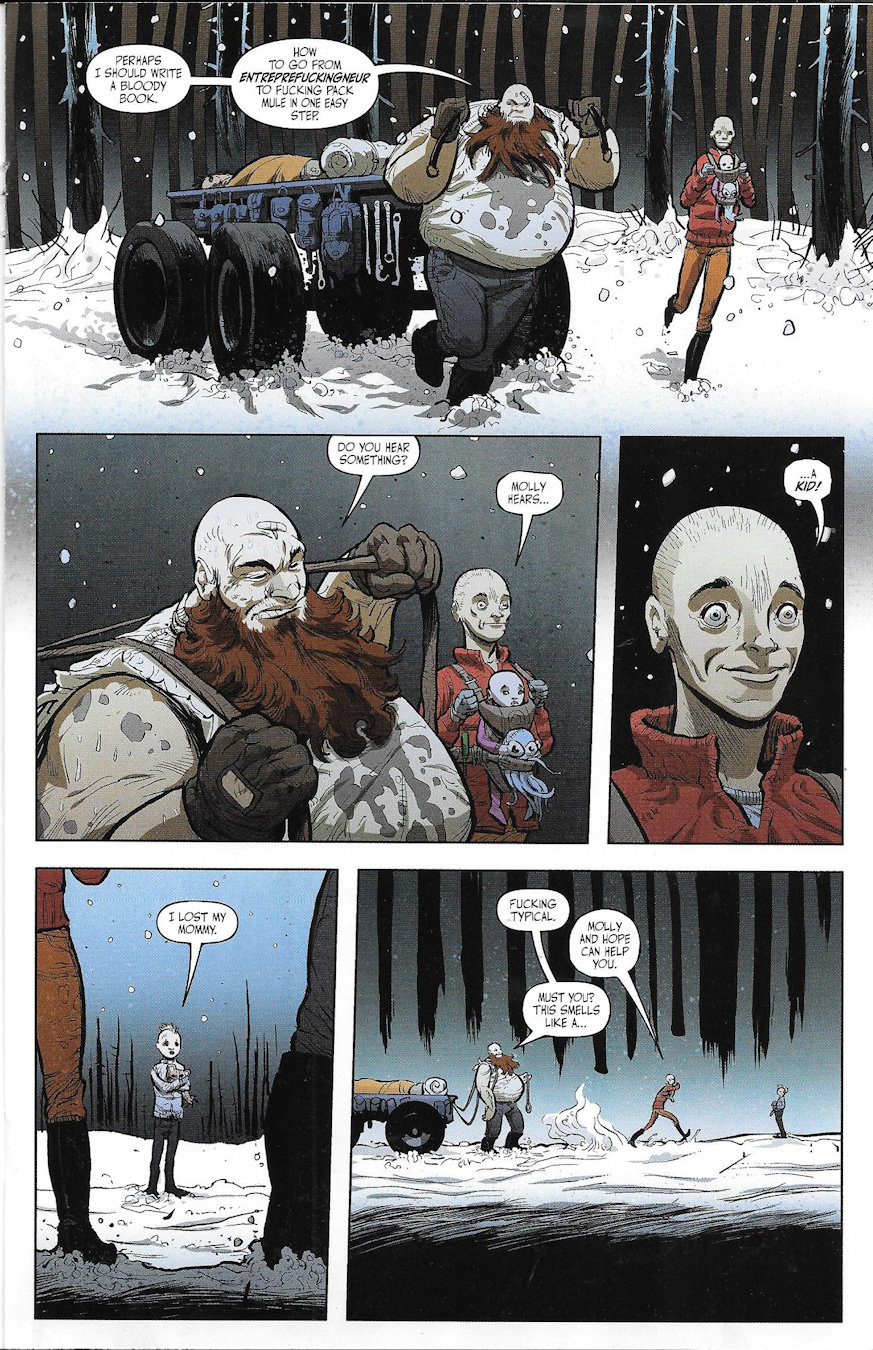 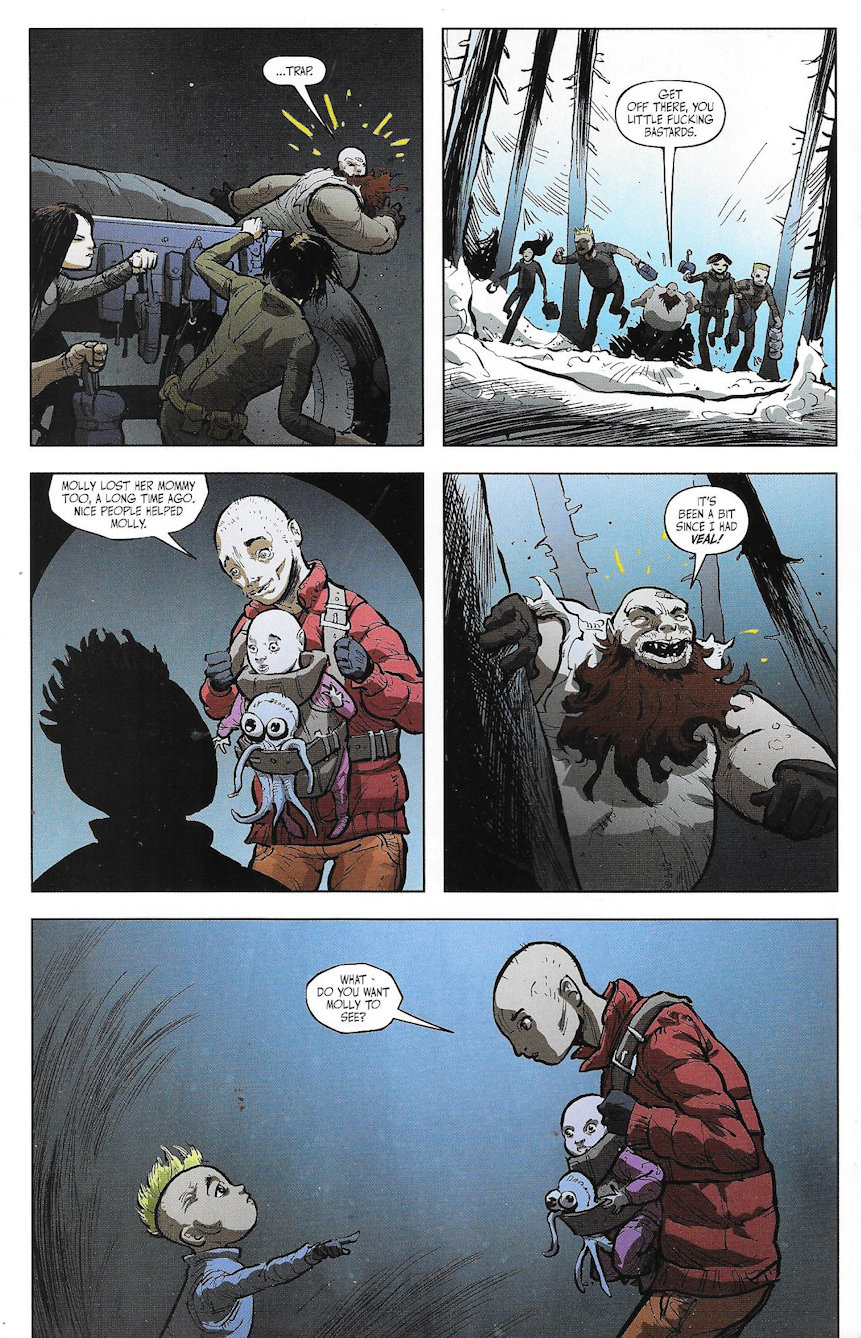 Molly and the big guy make it to a clearing where Vox’s tribe sets them up for an ambush. An ambush that Molly falls for immediately. Note that Molly is carrying Hope and that Hope’s favorite stuffed animal is a octopus. I find that oddly metaphorical that the destructive creatures are tentacle monsters and our savior-baby character loves a stuffed octopus.

Our big guy character who might get a name sometime chases after the kids who have nabbed something off the back of the cart. Molly is taken captive at sword-point by Vox. While this is happening, the trap sprung for the big guy closes, but with a very unexpected outcome. 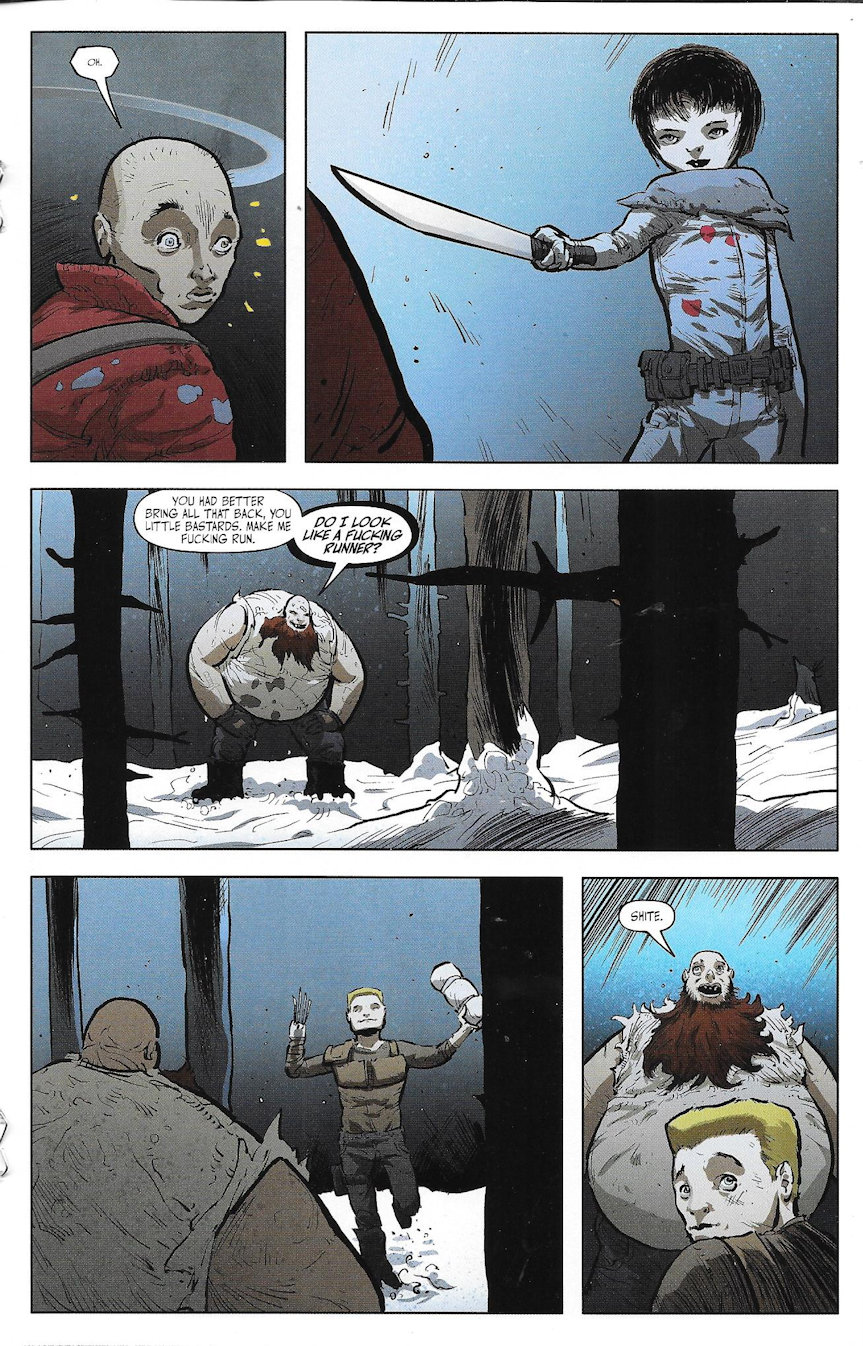 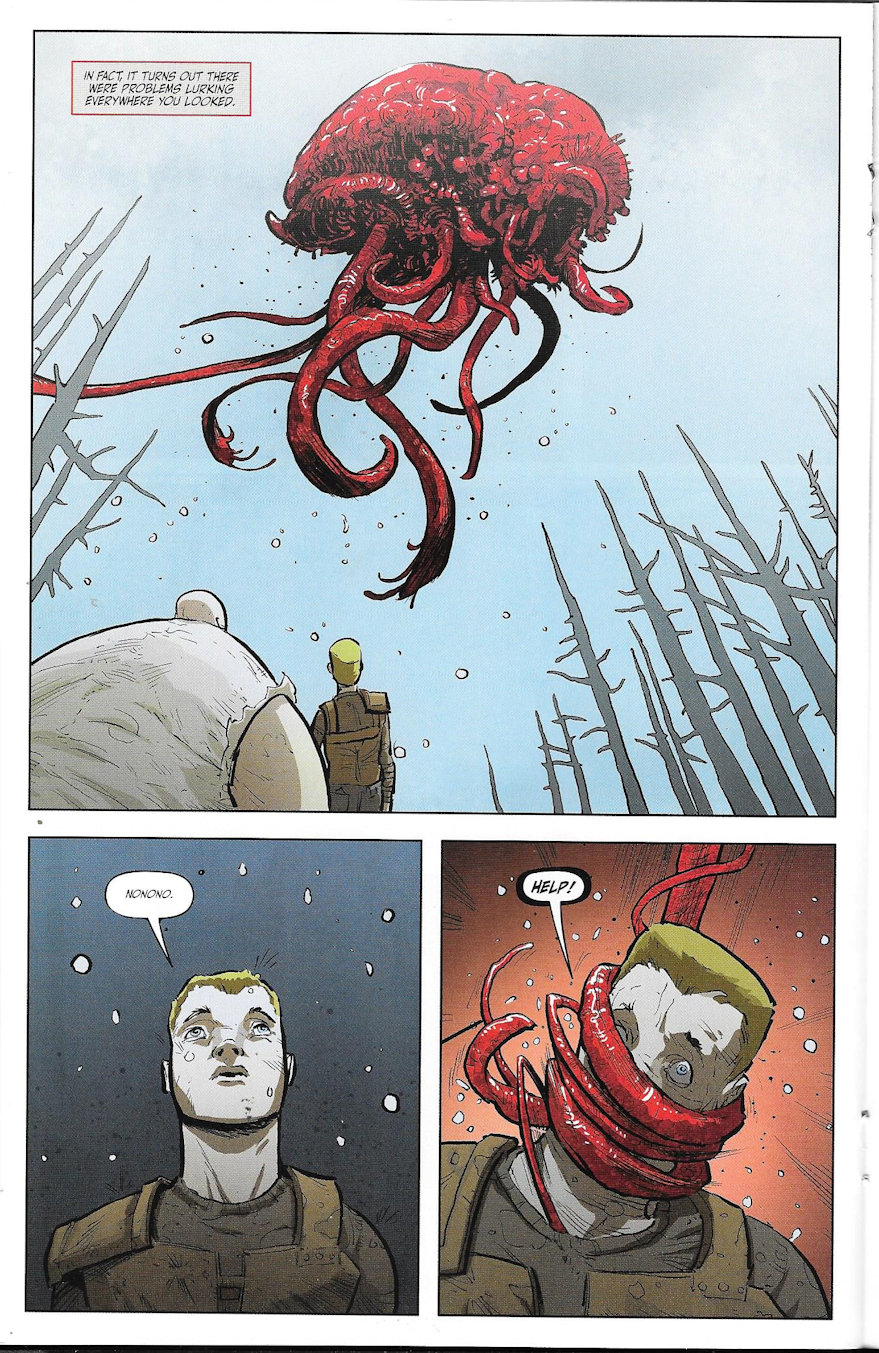 Appears the characters forgot about the spread horrors until one drops out of the sky for them. 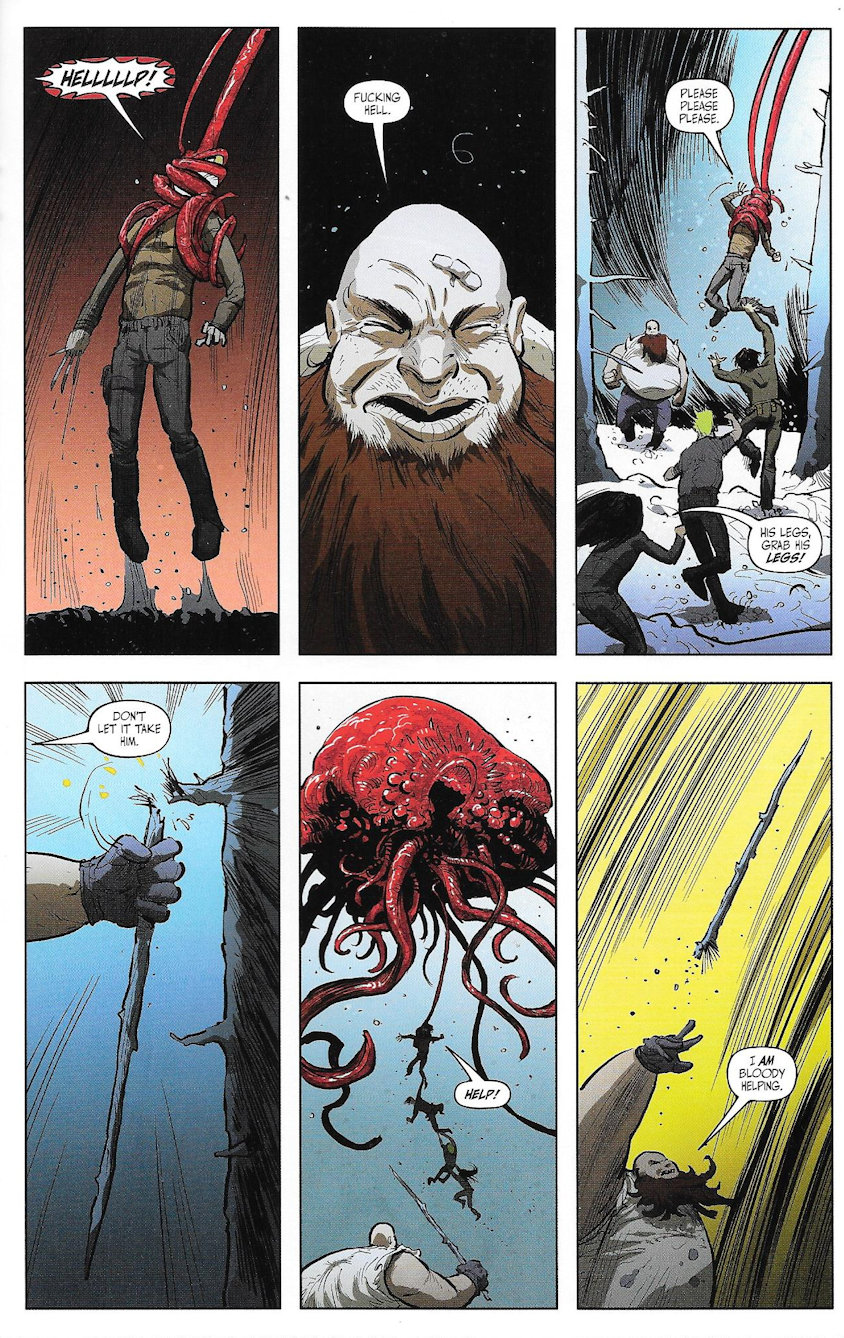 Now it becomes everyone versus the spread monster. The kids try to pull their friend free by weighing down the blood-red balloon creature. The big guy takes a more “pop the balloon for a prize” approach. 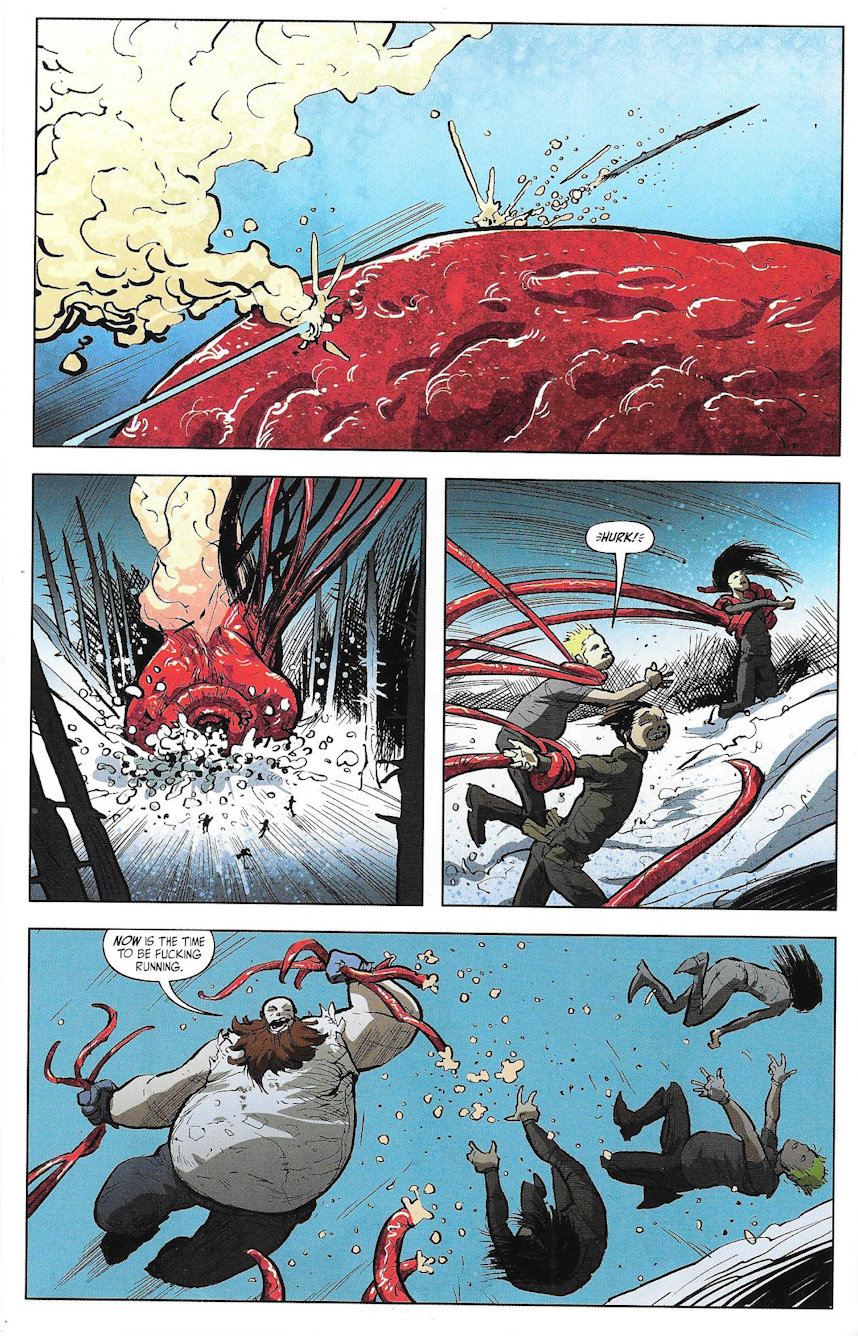 He then does his level-best at rescuing everyone, even the guy that probably has the highest changes of being spread infected… 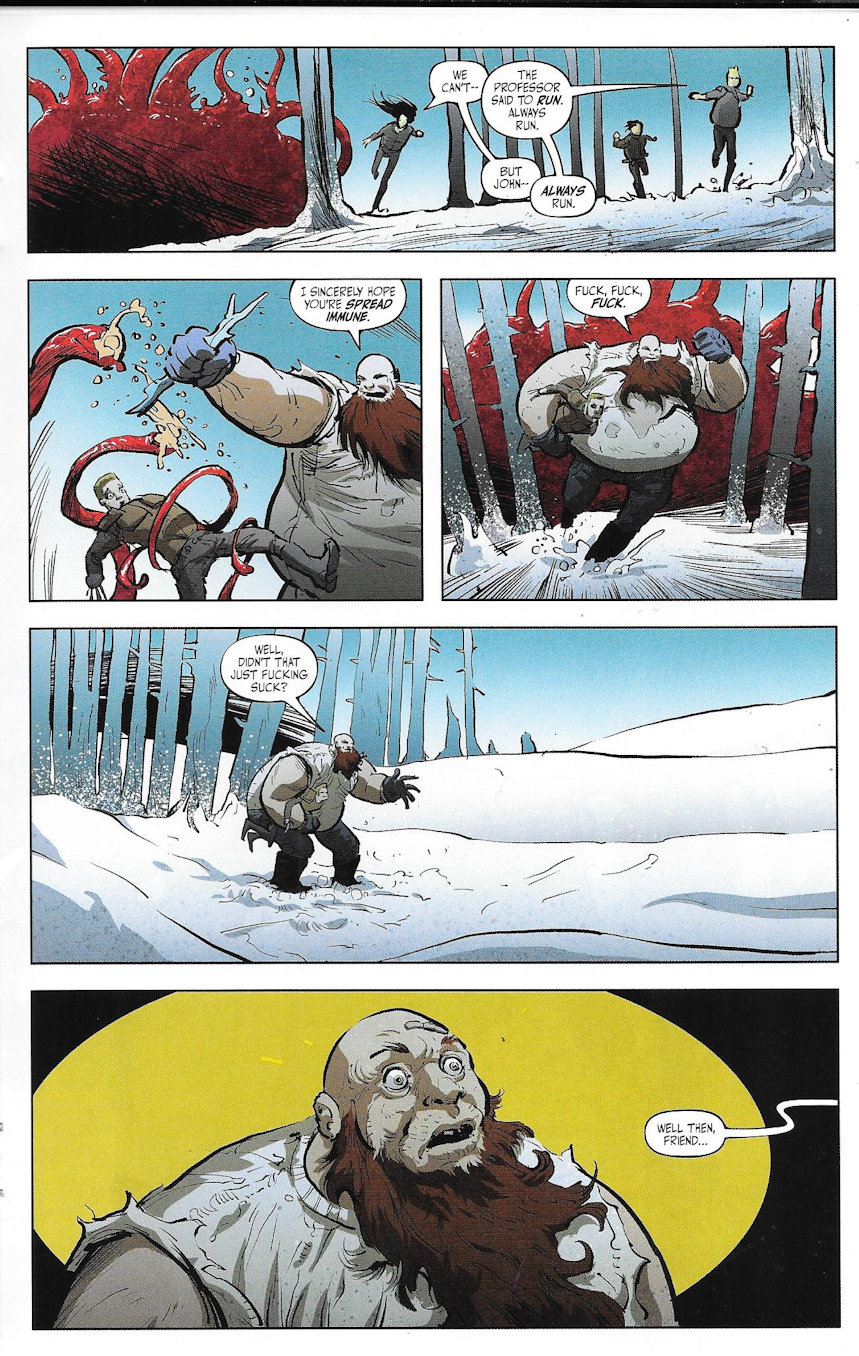 …not that this appears to have won him any points. He returns to a captured Molly and Hope, while the group leader holds No’s head at swordpoint. 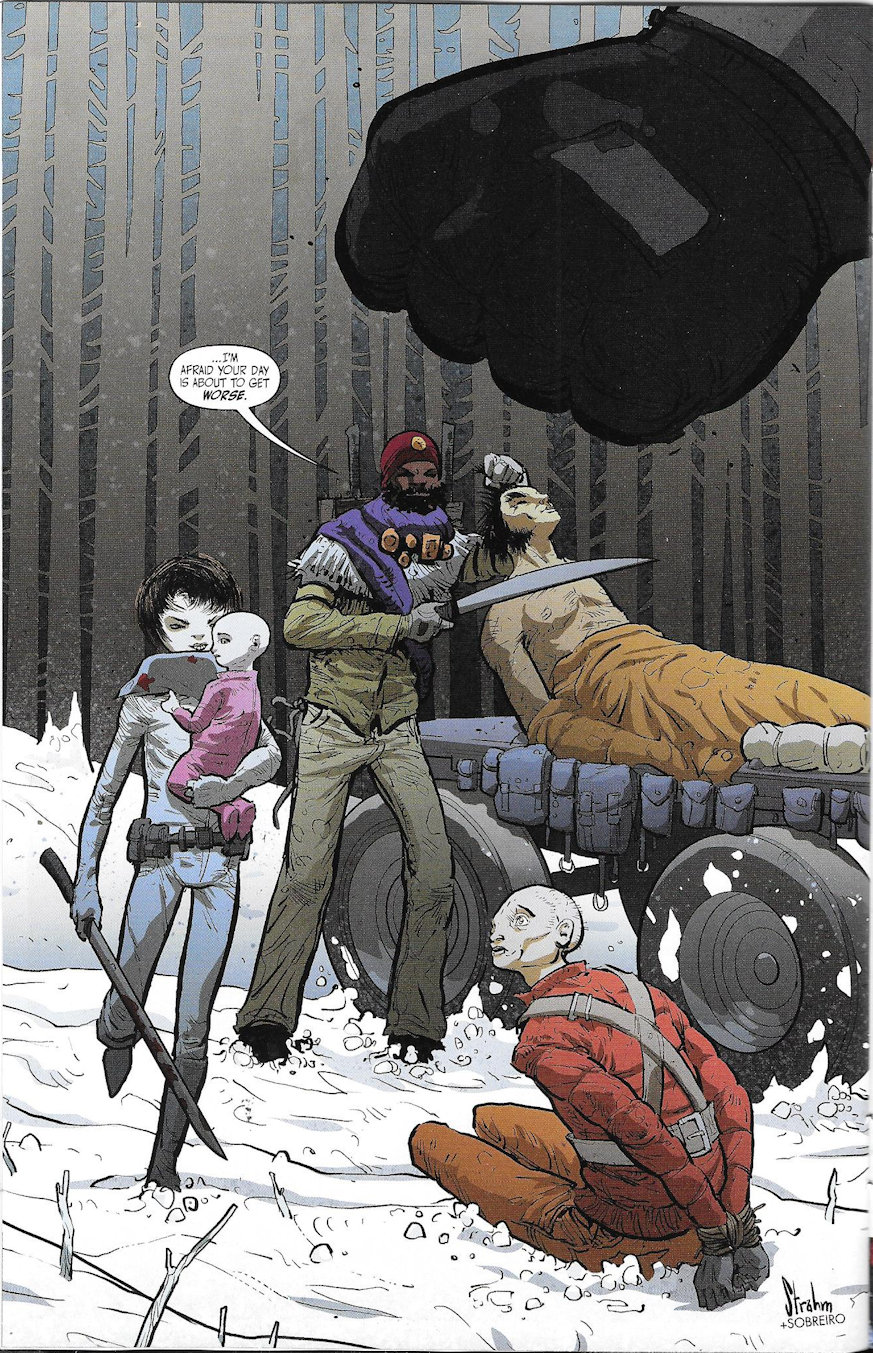 Neat book! The art is the real draw here, specifically the choice of color pallet giving the distinct tone of this particular creature pandemic. There were 25 of these and it’s worth it to bring just one home for a look if you are curious. You might find yourself turning into a fan.

Posted by SonOfCthulhu at 8:35 PM