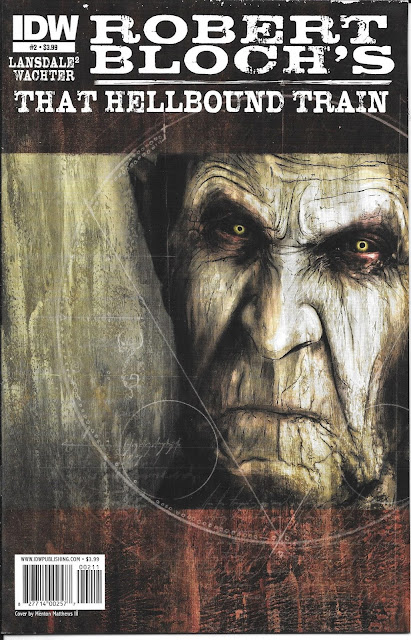 It gets good in the middle…

Robert Bloch is famous to me for being killed by Lovecraft.

Yes, I get it. Bloch wrote Psycho, which was a tour-de-force Hitchcock movie and started Anthony Perkins' career off on an interesting angle.

But for me Bloch will always be the youngest member of the Lovecraft Circle of authors, a place of envy and honor. He began his writing career at the tender age of seventeen as a protégé of H. P. Lovecraft, who was the first to seriously encourage the young man to use his talent. It was Lovecraft who Bloch first emulated and he was a frequent contributor to pulp magazines like Weird Tales.

This three-book graphic novel series is based on his Hugo award-winning story of the same name. I don’t have book one and in an odd stroke of weirdness, I didn’t miss it up until the moment I started writing this review.

The “last issue” blurb sums up that book quite nicely though: Our hero is Martin. There is a train that collects souls bound for hell, and the conductor is the Devil himself. You can sell your soul to the conductor for a better life, but at the end of your days, you will board the train to hell. In exchange for his soul, Martin has been gifted by the train conductor a pocket watch with which he can prolong the perfect moment for all eternity, he just has to find it.

What I learned from the Wiki on this story is that Martin is a young hobo drifter who is living a life of crime to get by. He likes trains and one night a large unmarked black train pulls up to the station at a time no train is scheduled. The conductor offers Martin anything he wants and in return he will ride the train to hell when he dies. This is what prompts Martin to ask for the power to stop time, symbolized by him winding the stop-watch. Here is where we pick things up. 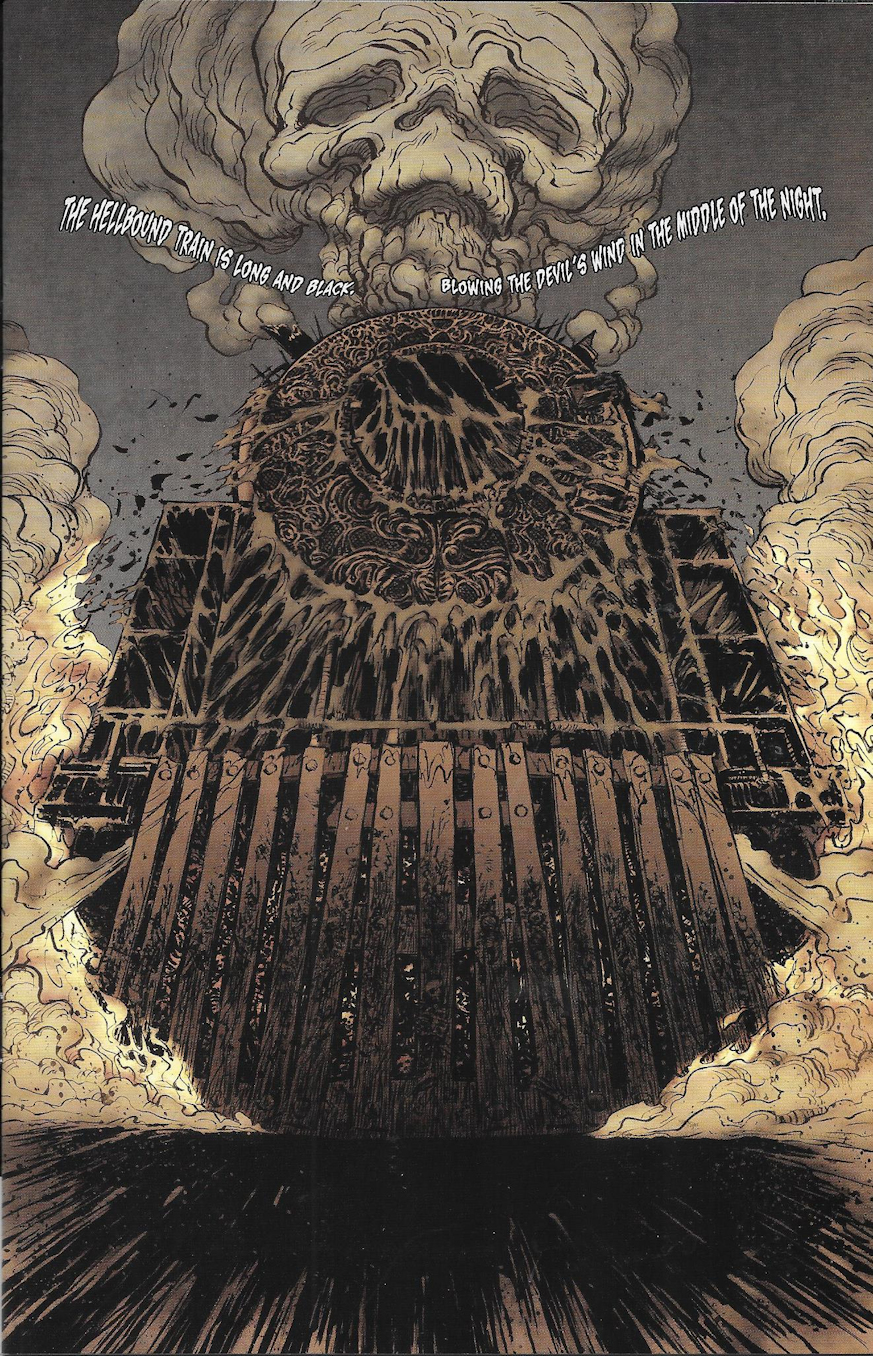 The train conductor is taking tickets to hell. This passenger has a rather lengthy list of crimes including extortion, murder, lies, threats, and so on. The conductor calls him Al as he stamps him cancelled (note that it isn’t the ticket that gets cancelled here) and moves on. No doubt this is supposed to be Al Capone. Then the devil in conductor’s cap walks out of the train and, in an amazing transition, into the park where Martin is sleeping this evening. 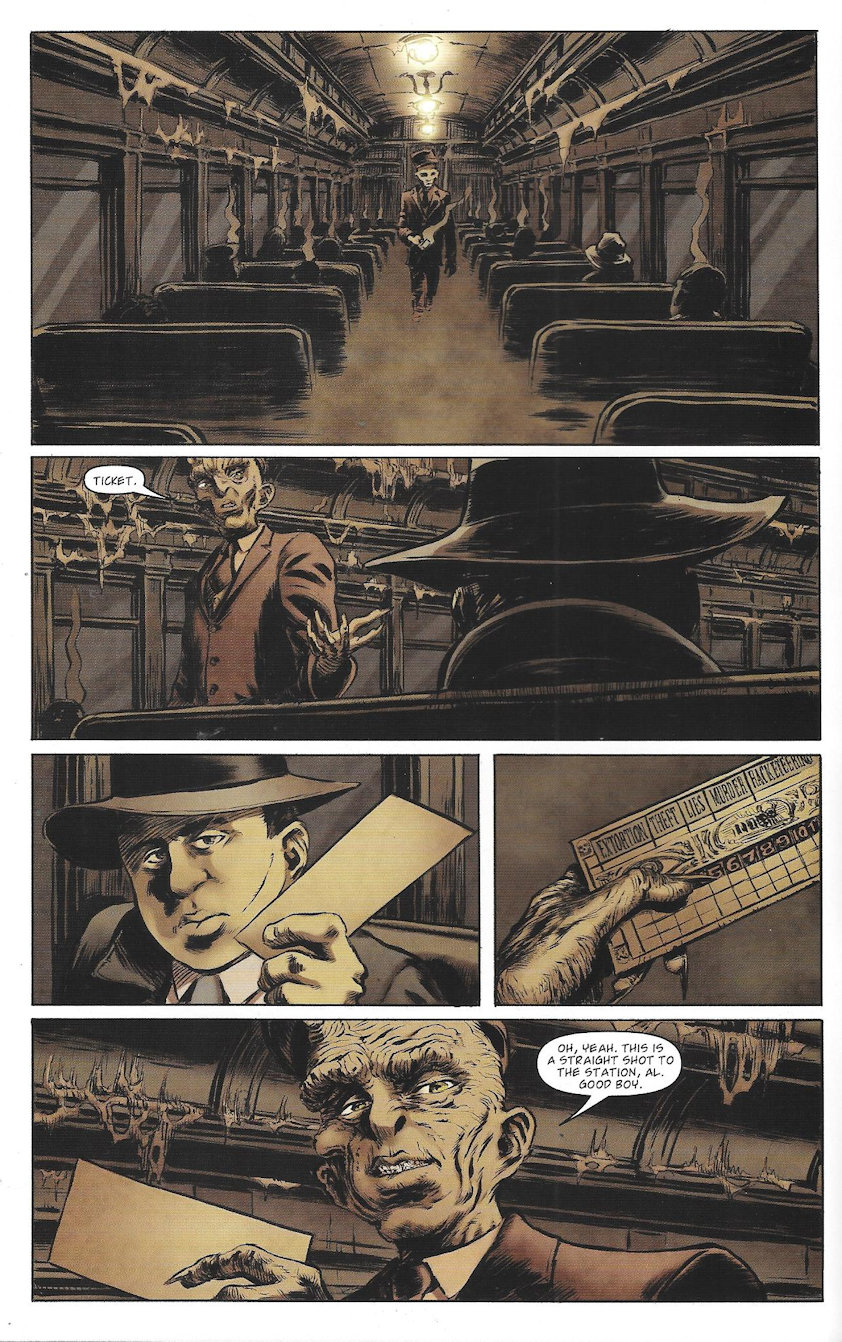 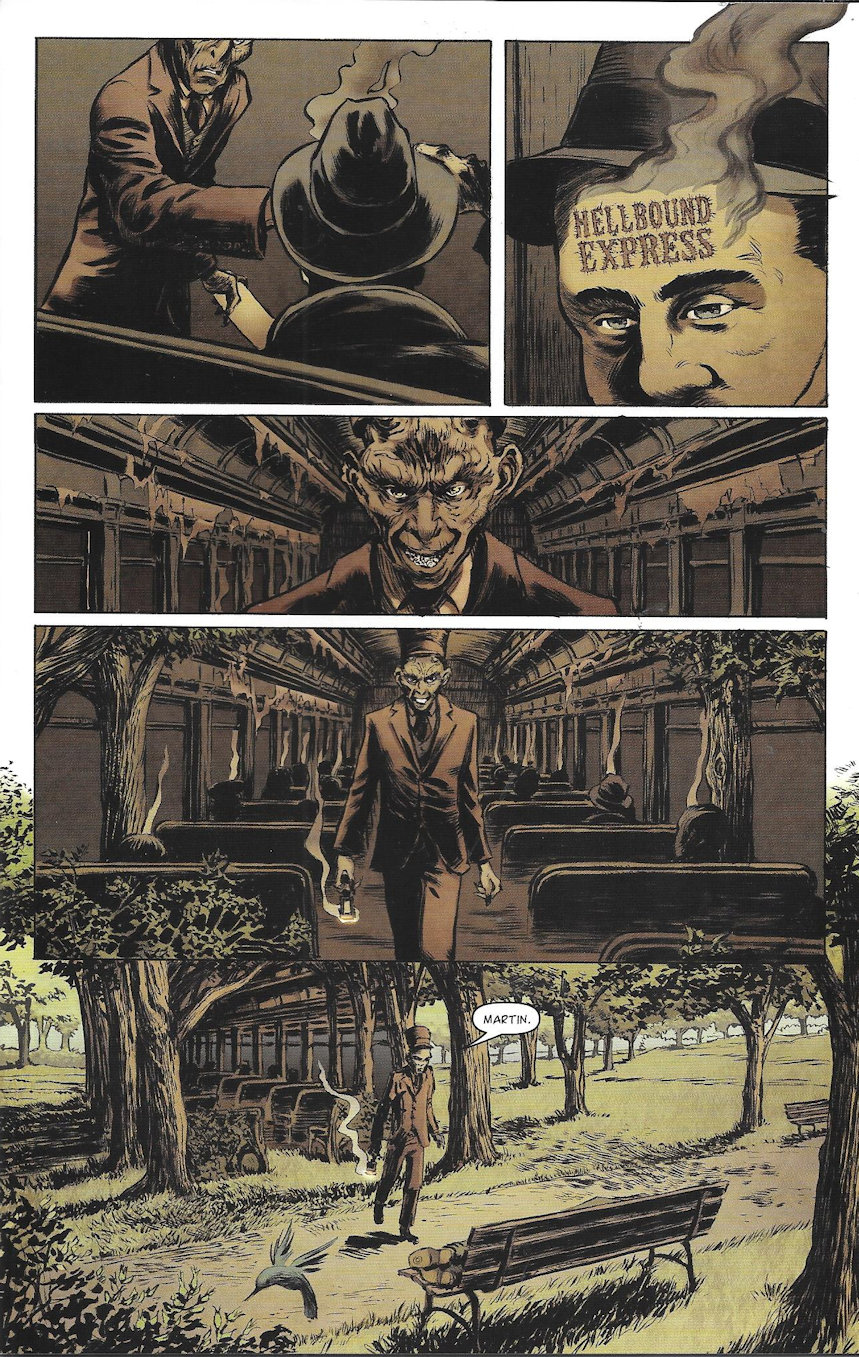 Martin awakens, but there is no one there. 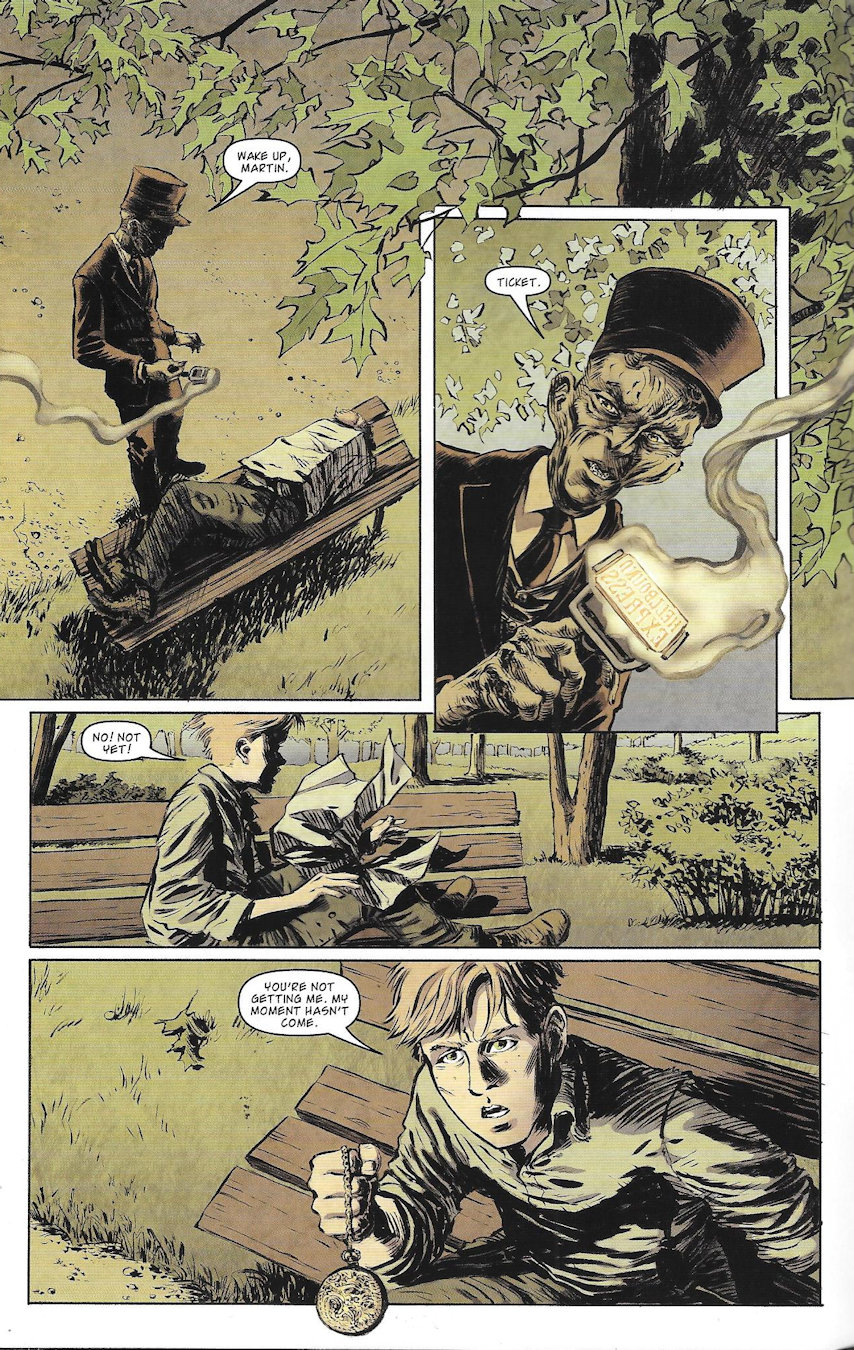 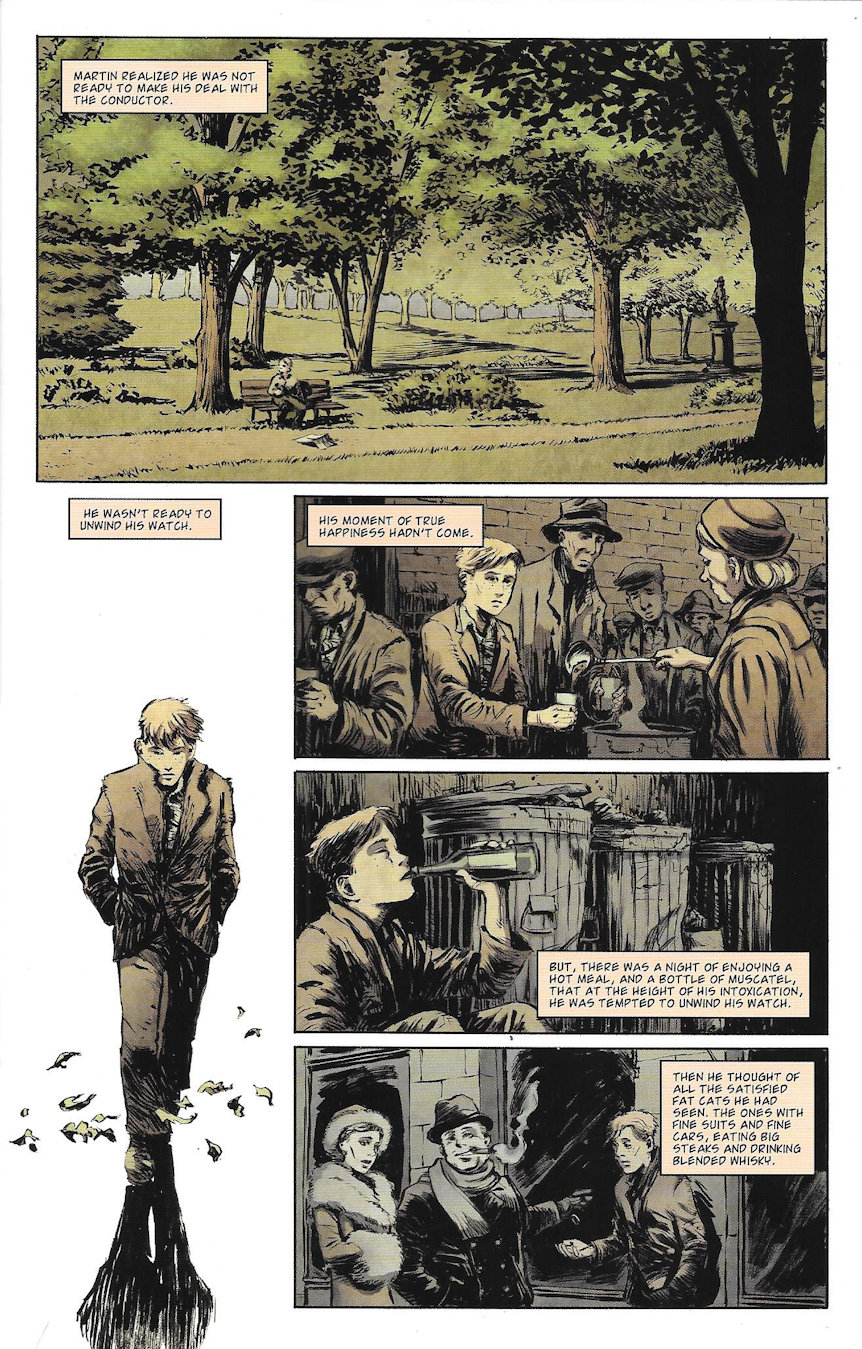 The story then follows Martin’s perspective for a bit. We see his life improving, piece-by-piece. His work ethic leads to a better job, which leads to a chance at education and a better career. And once that happens he has money for a house, money for a car, money for two-chicks-at-once….(Office Space reference). And his work buddy gets him thinking about a girl to settle down with. 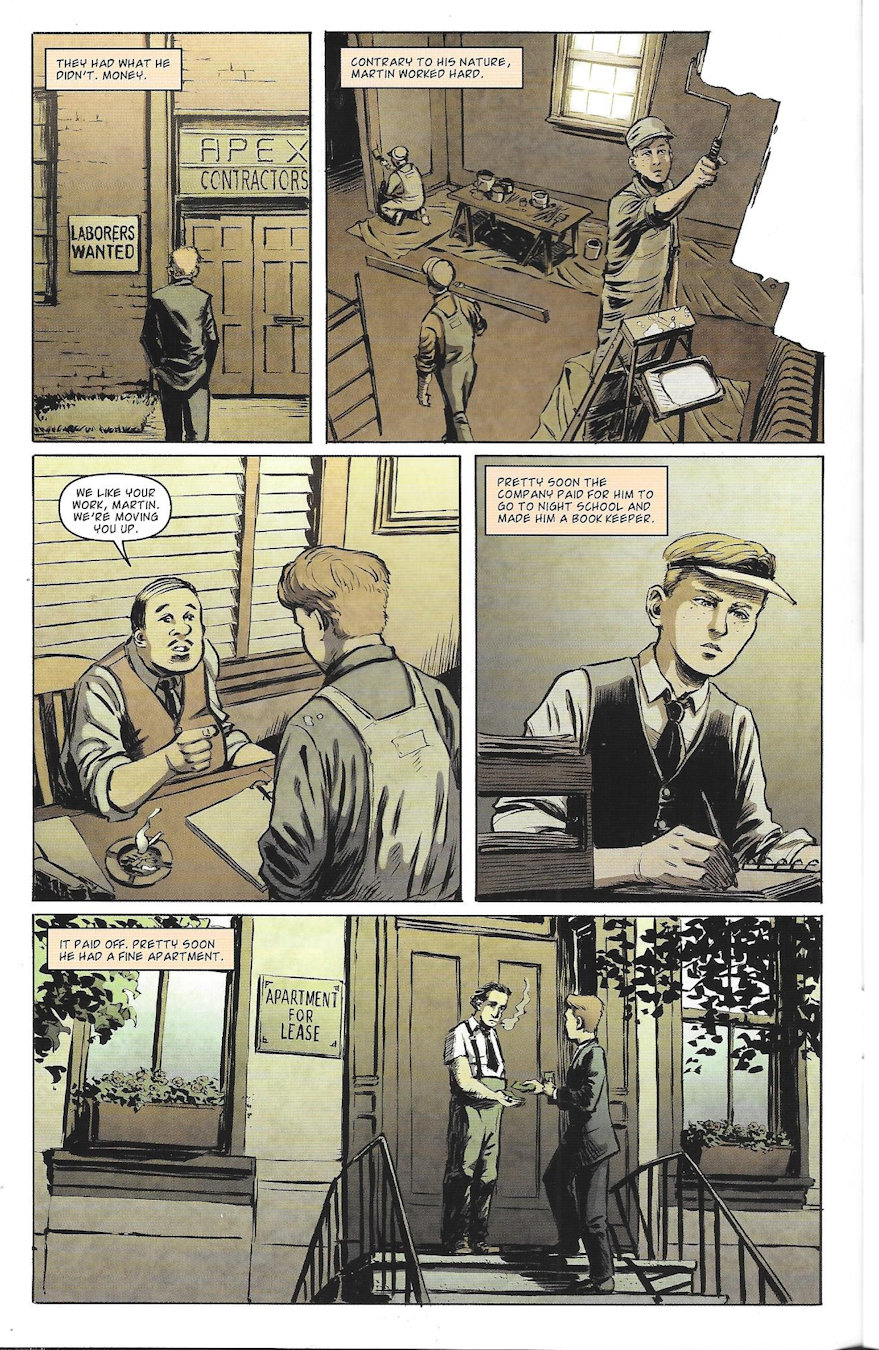 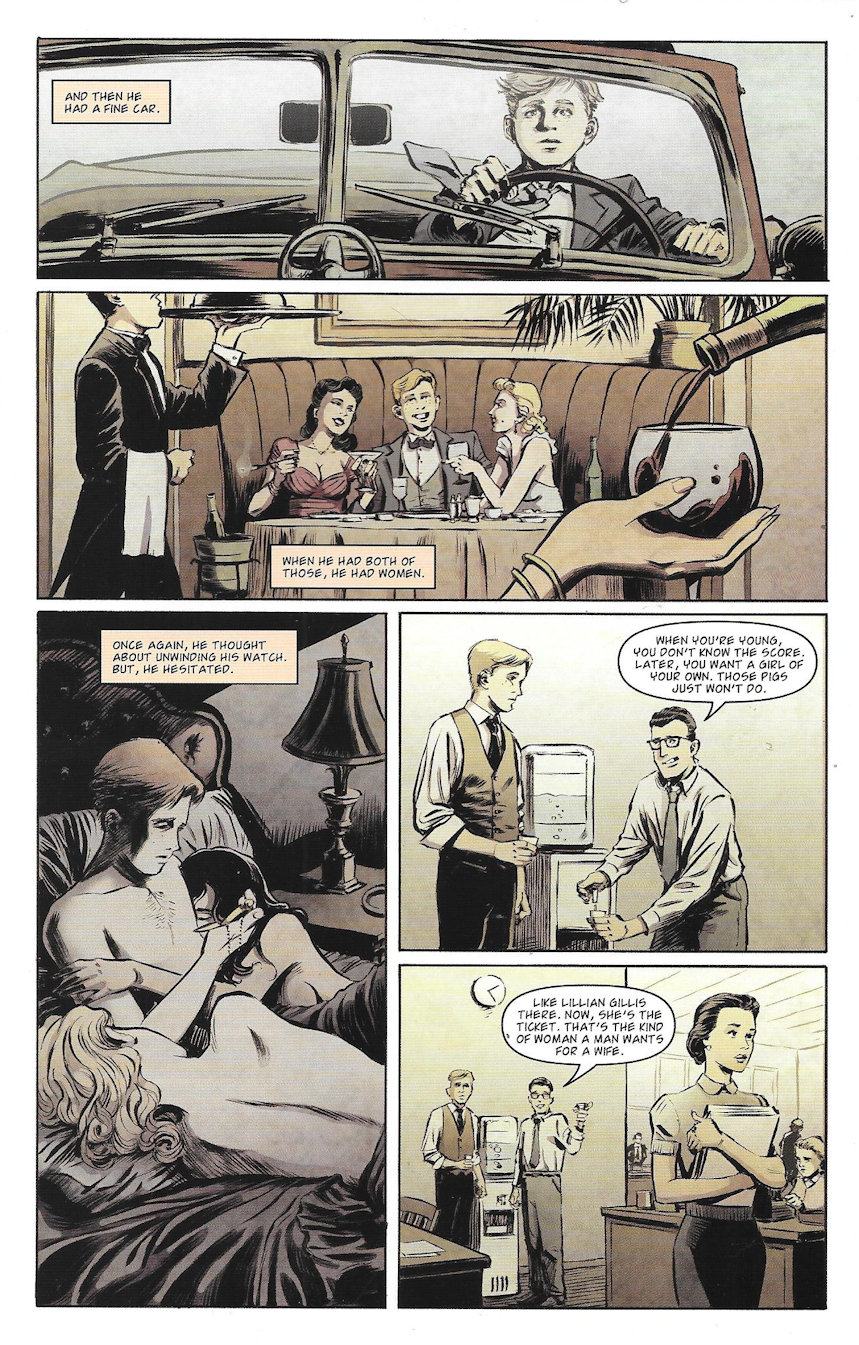 And he does. Each of these moments are near perfect, yet Martin doesn’t use the power of the watch at any of them. 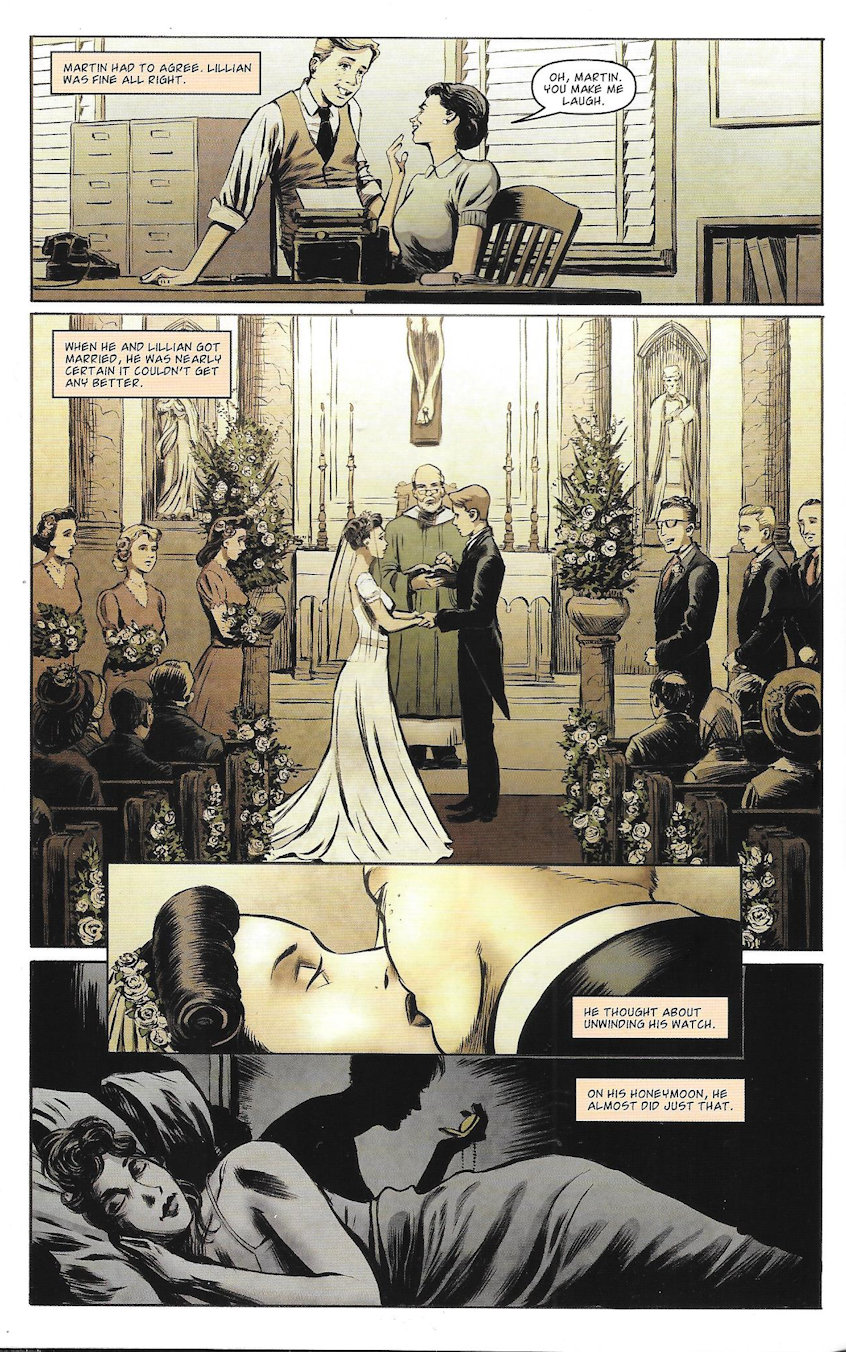 And while spending his time watching trains, the conductor pays him another visit. The conductor temps him into not touching the watch yet because…things can always get better and telling him that he as plenty of moments left to choose from. 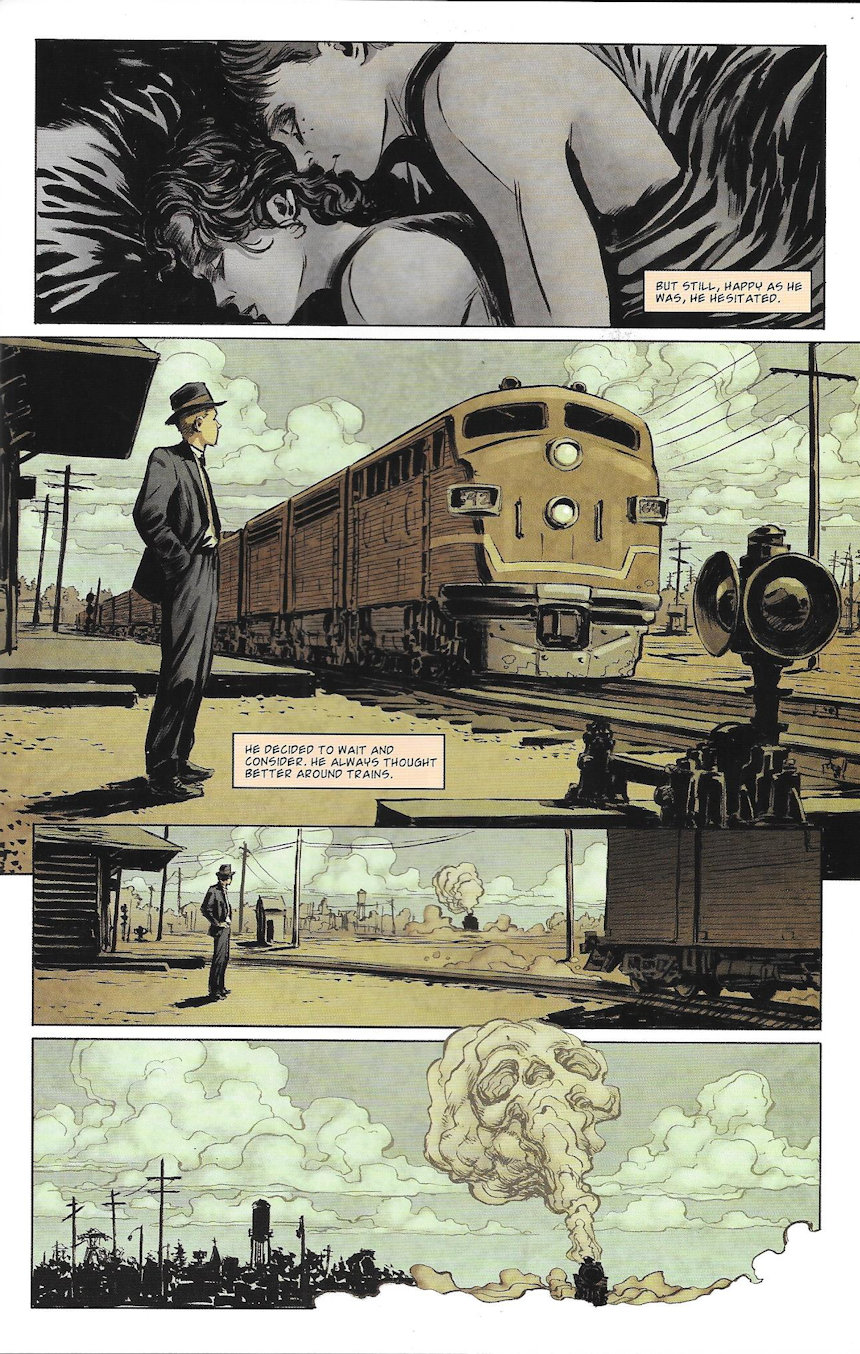 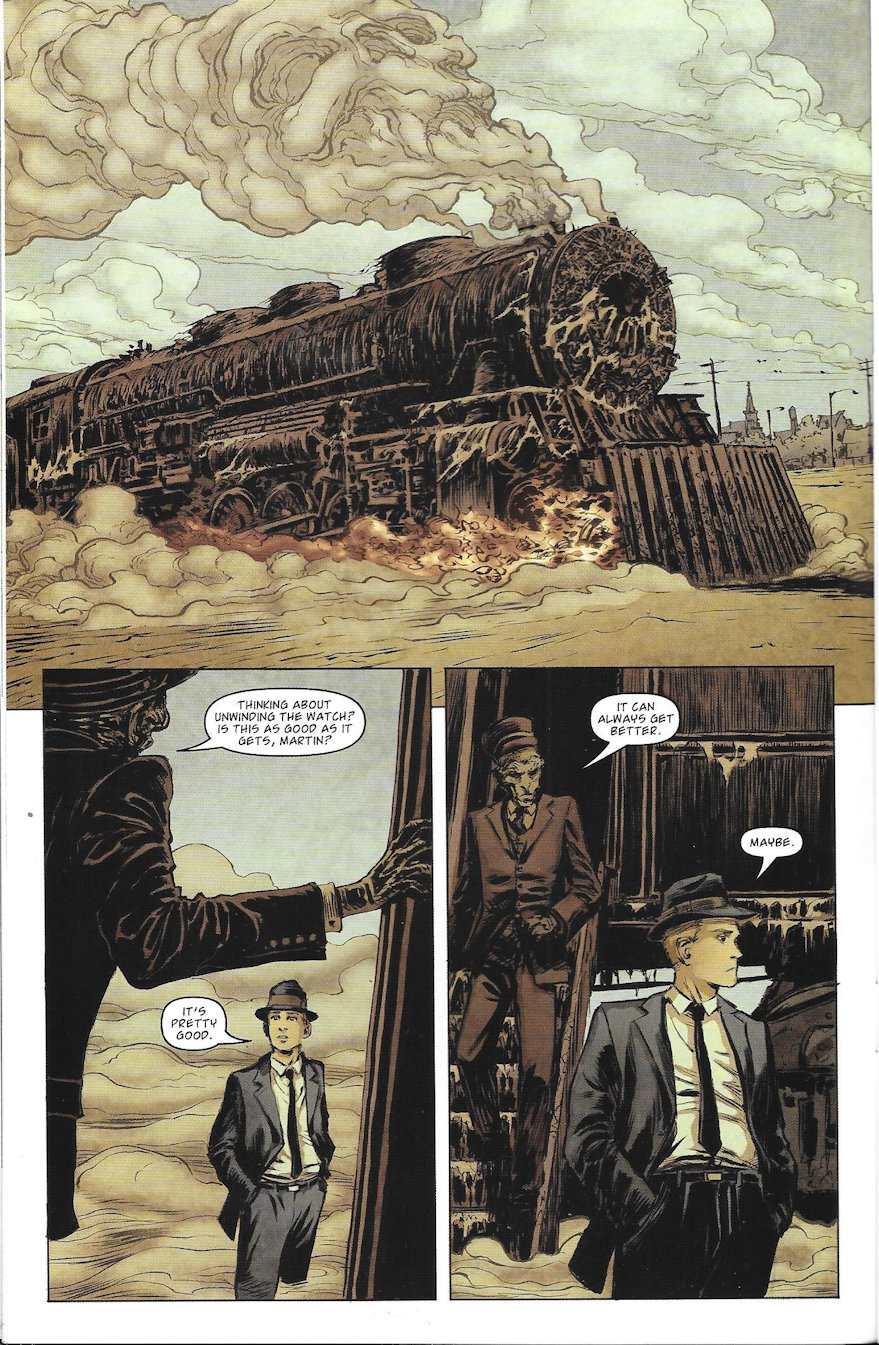 The conductor also has a hidden card up his sleeve. This woman who changes measurably as she exist the Hell-Bound train unseen by Martin. 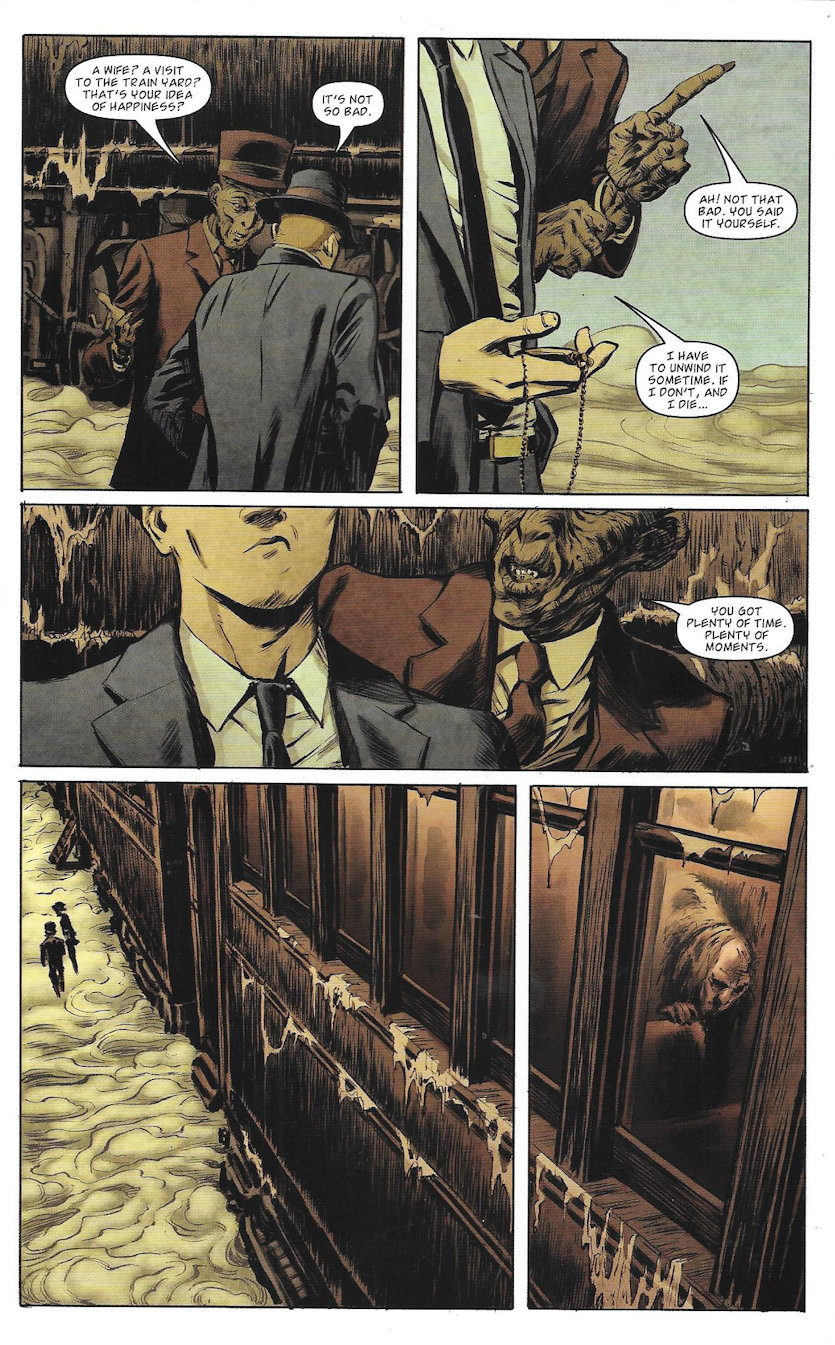 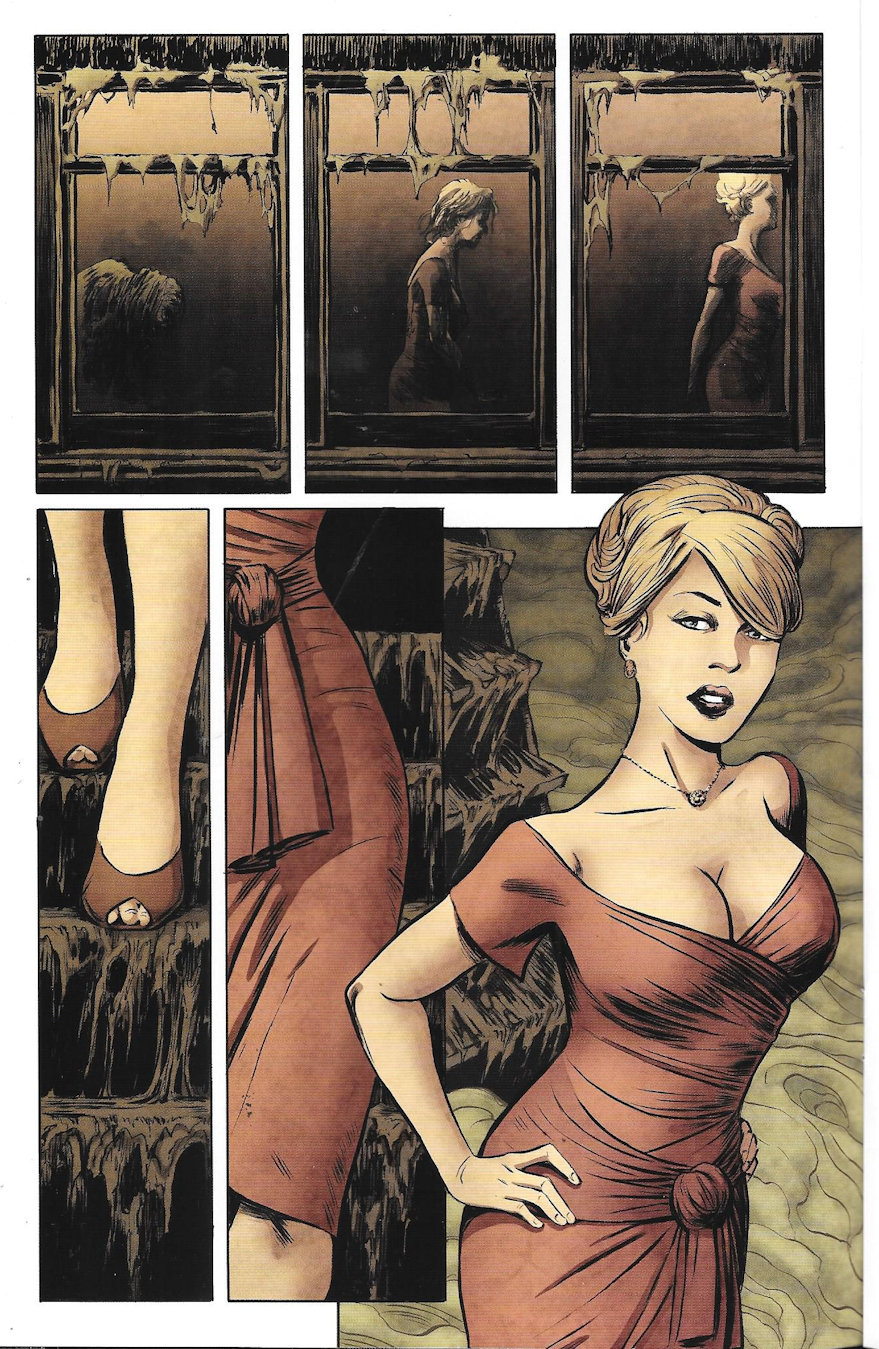 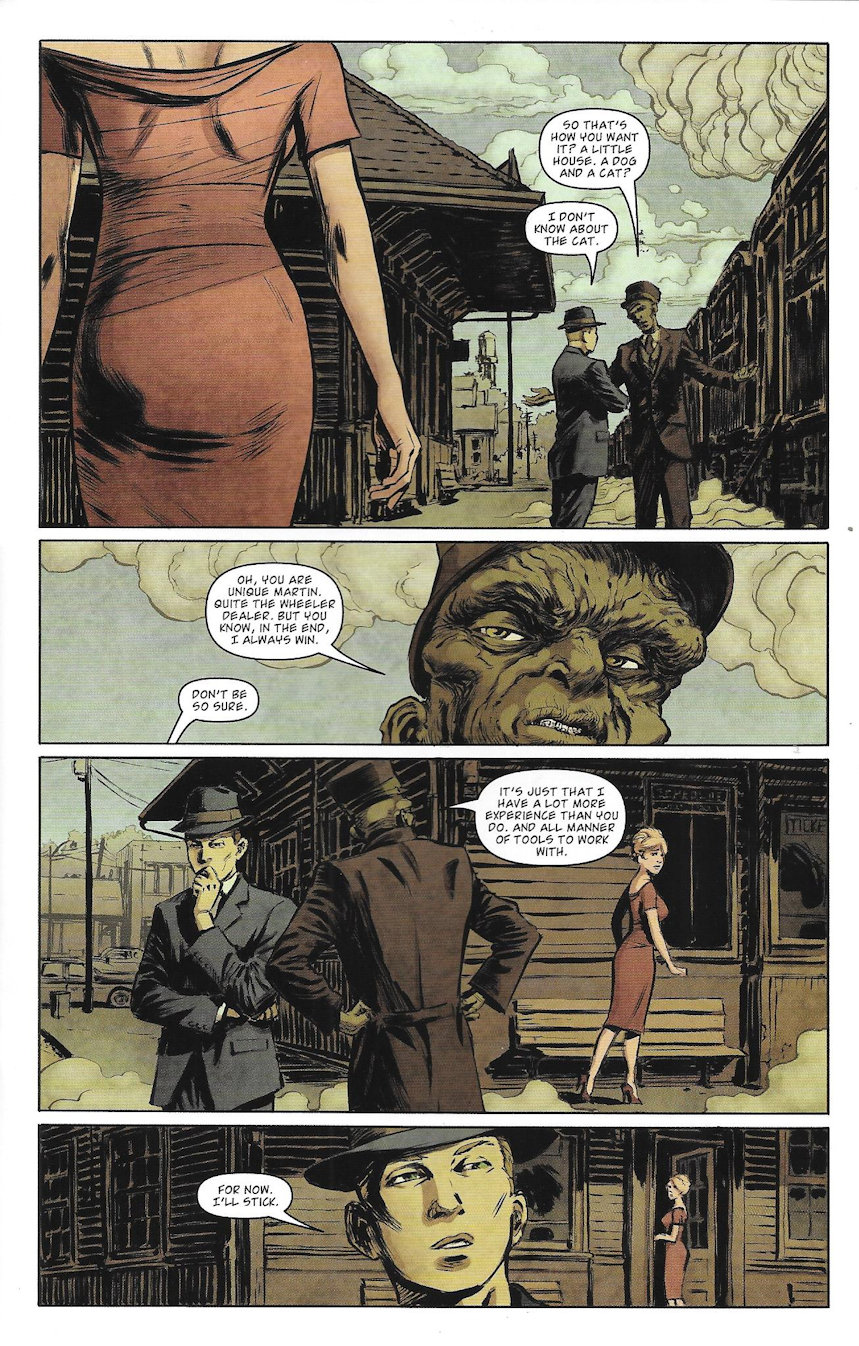 With that Martin is left to ponder if his lucky moment will ever come and the conductor takes off. As if to mar this day further, a raven poops on his suit coat. His wife notices the next day and gets him a fresh jacket. 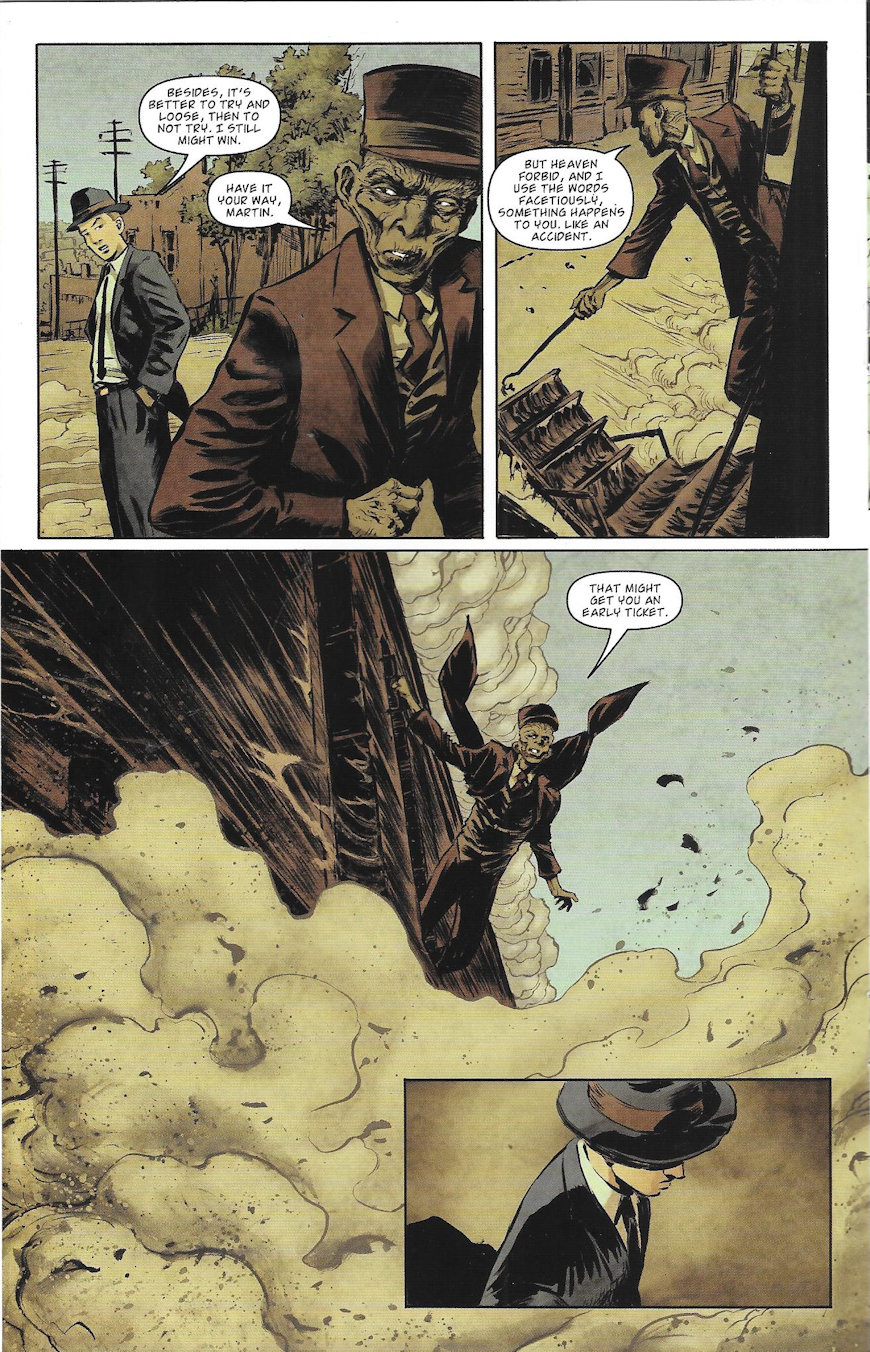 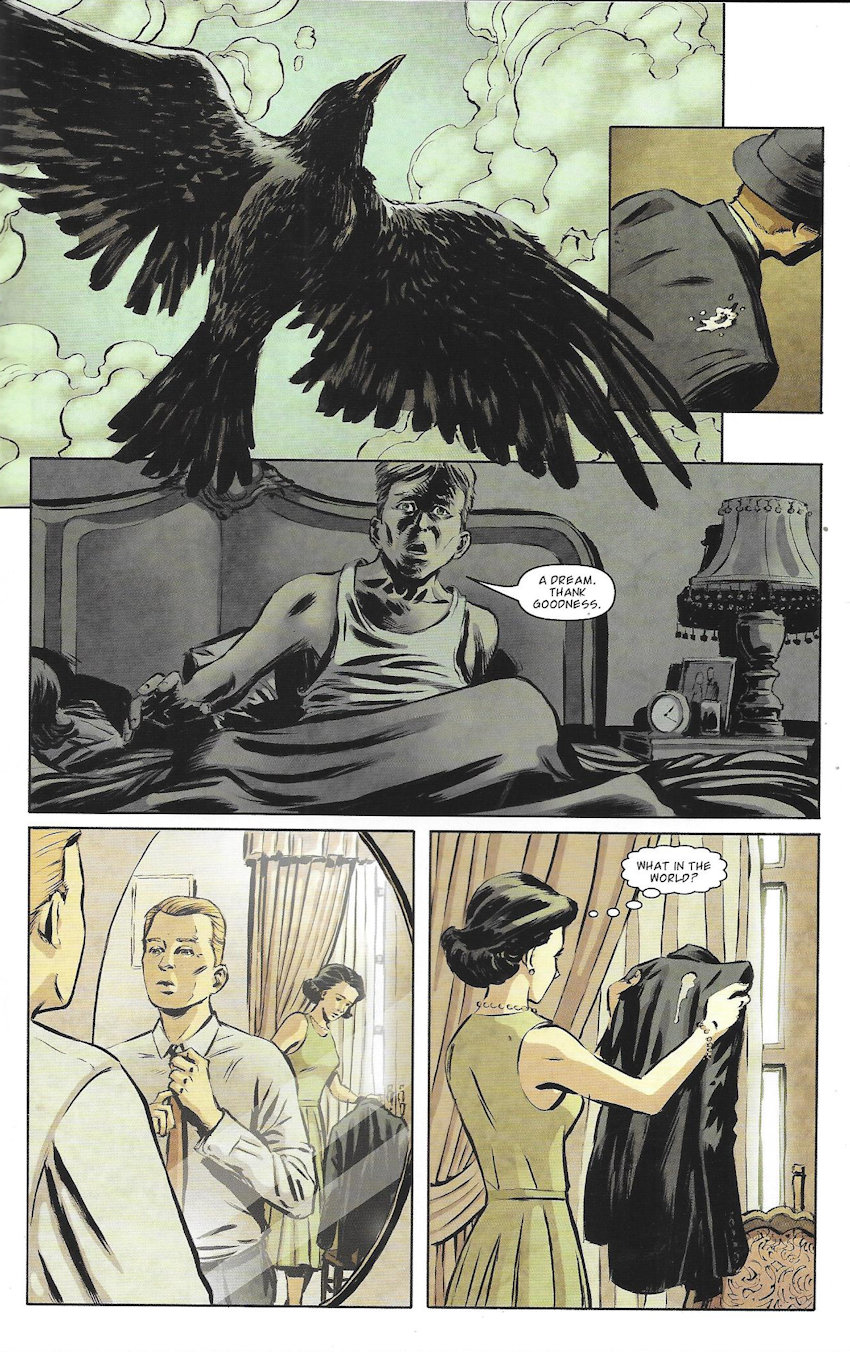 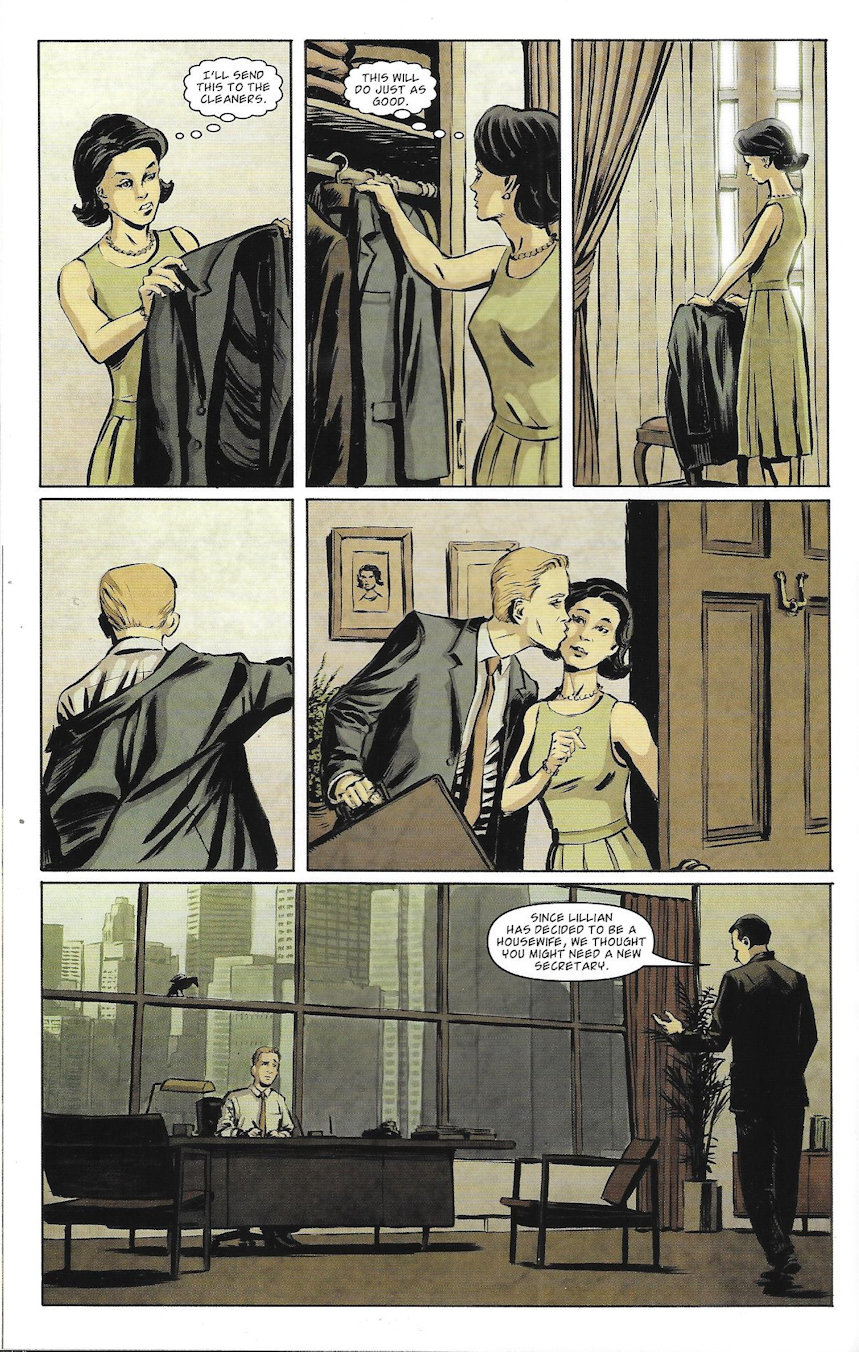 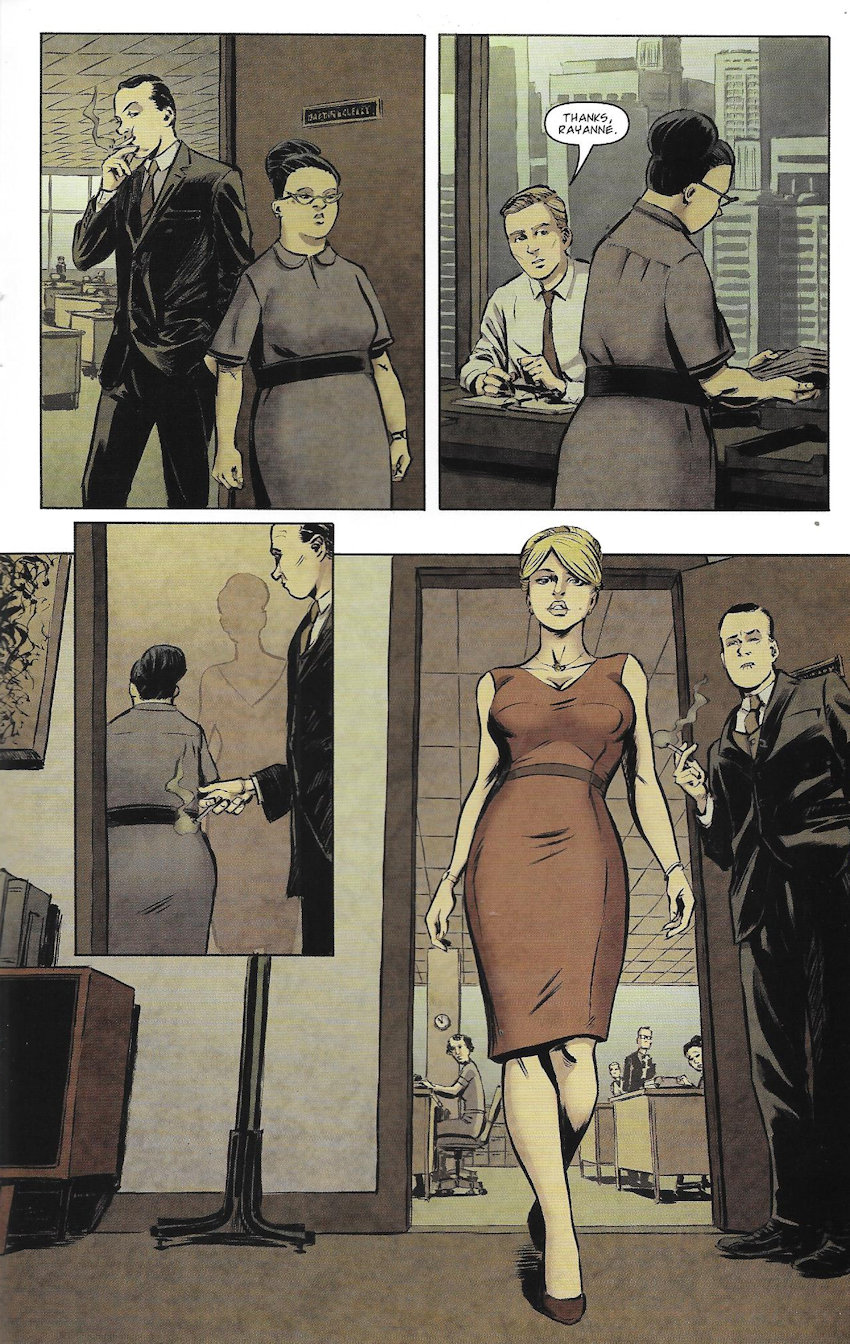 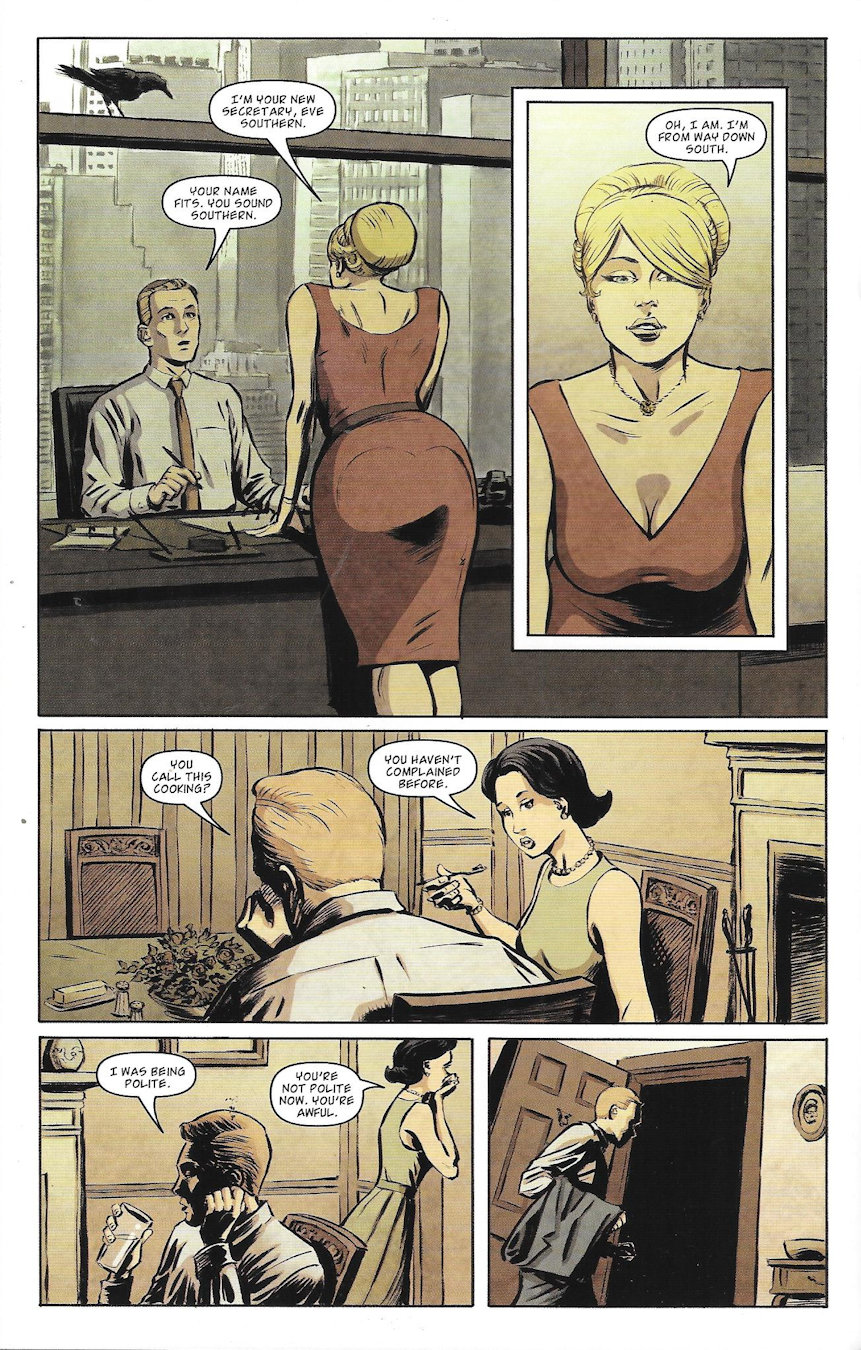 And something about meeting her turns the taste of his relationship sour.

Which leads to Martin taking some alone time to watch the trains. Which is where he bumps into the beautiful blonde secretary again. 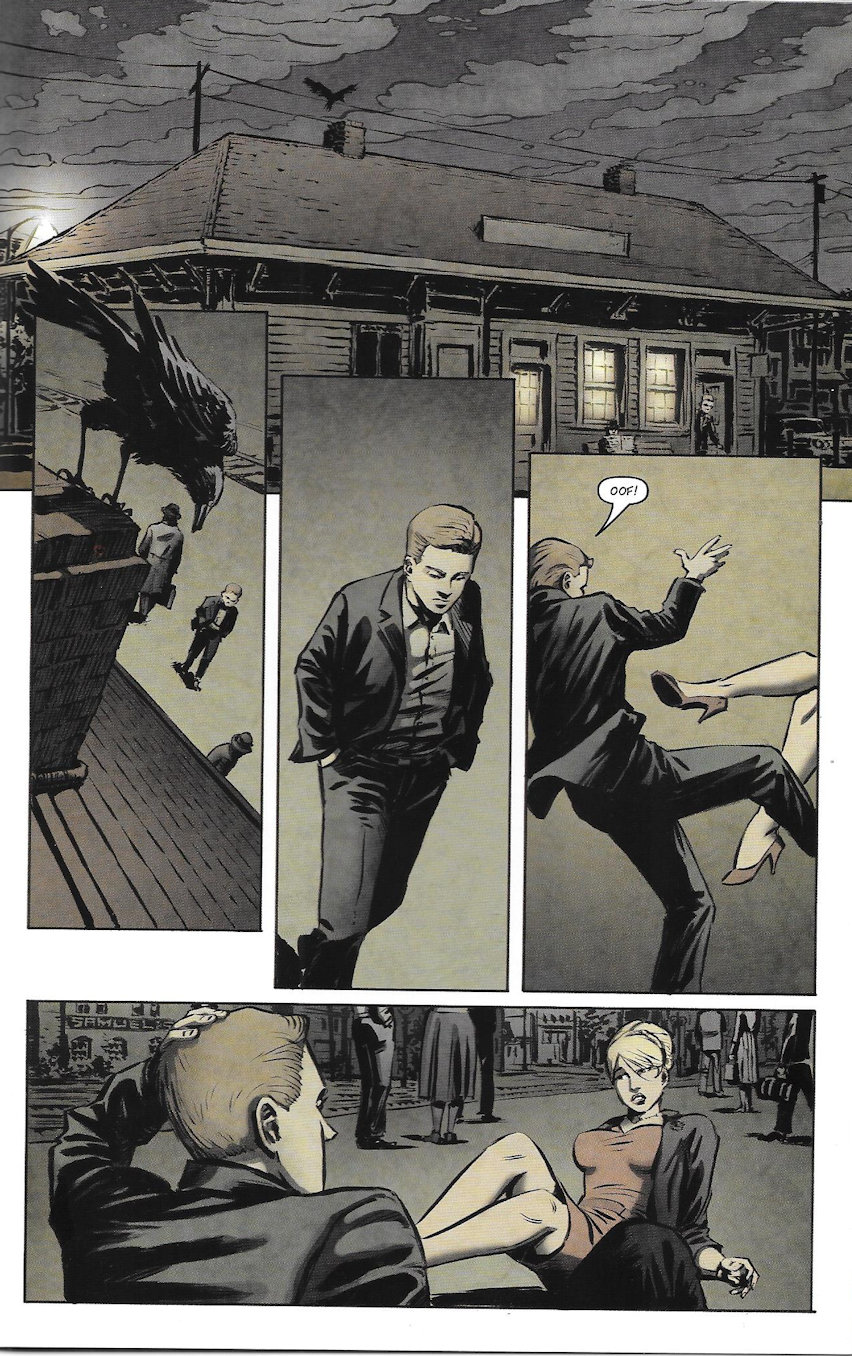 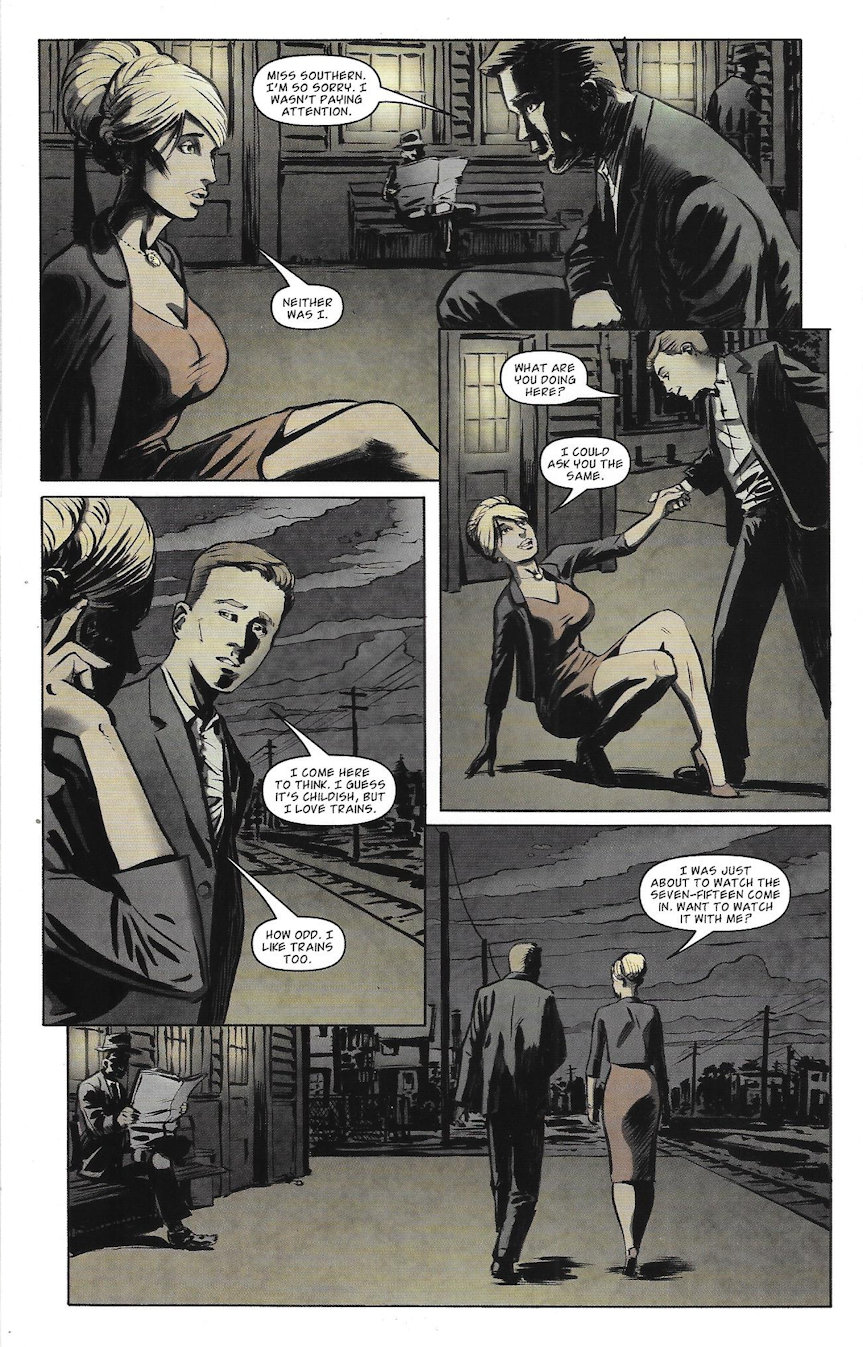 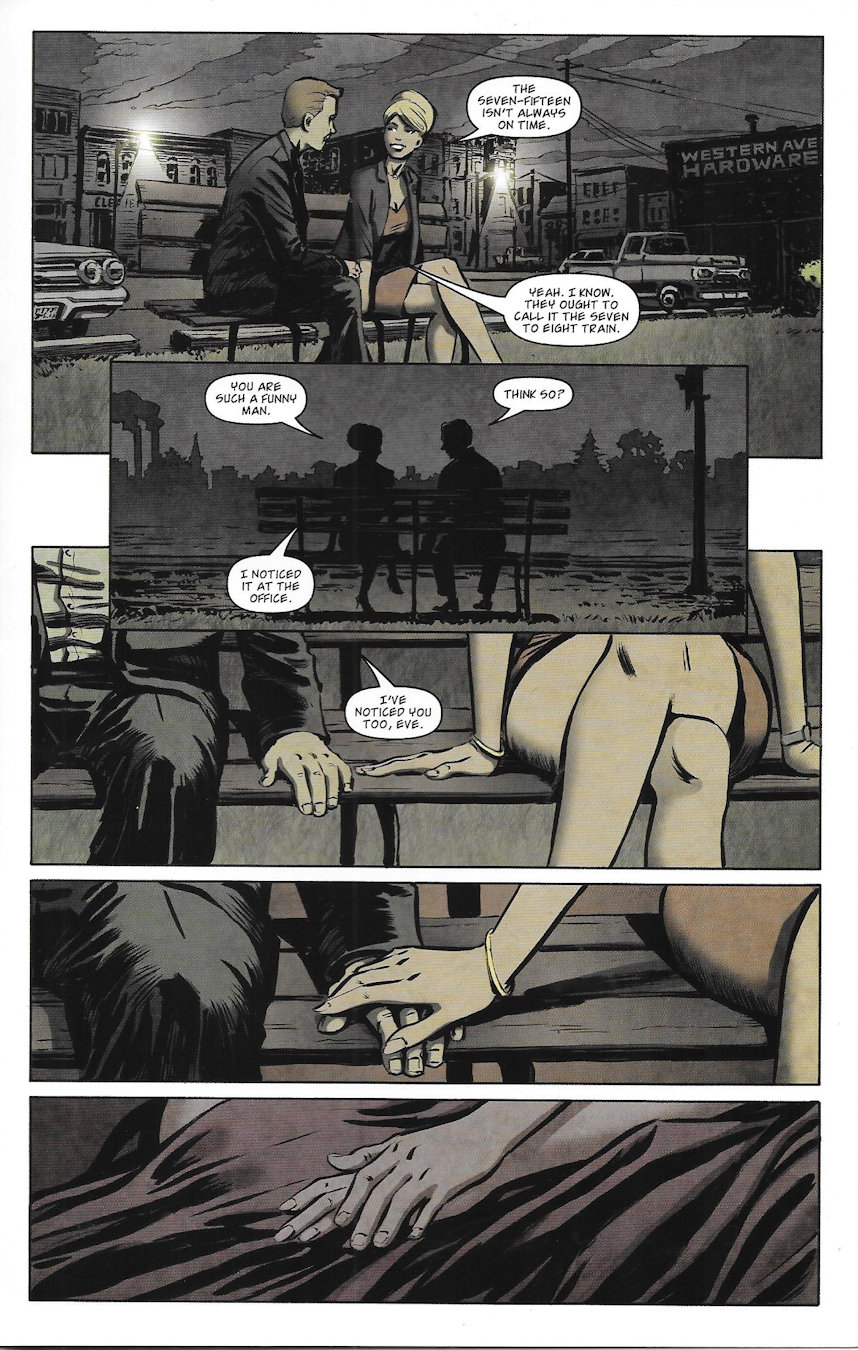 And this meet-cute turns romantic and the romance turns into a passionate tryst. A tryst that ends in Martin reaching for the watch… 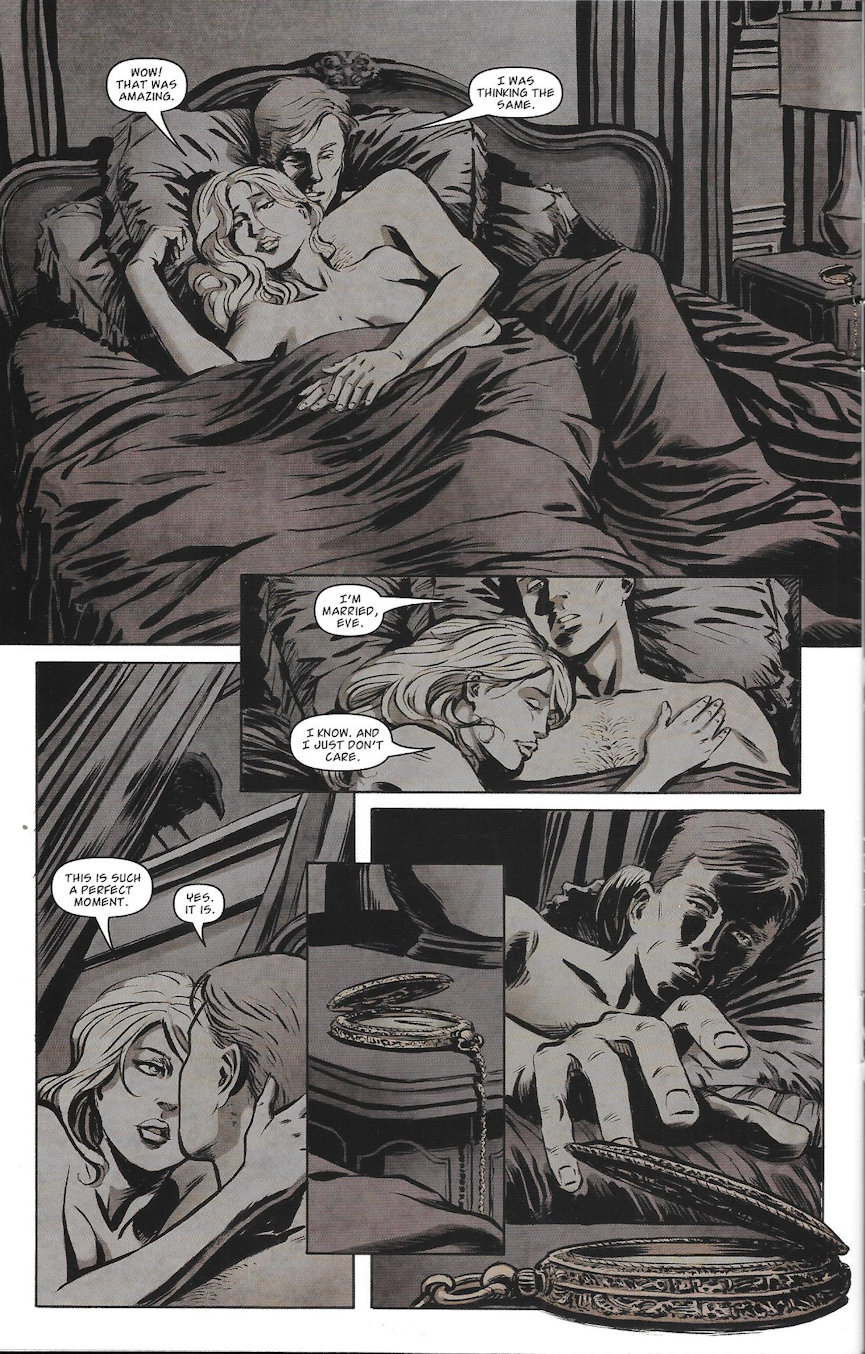 …and don’t you fear. I’m NOT going to leave you hanging this time. (get it) Tune in tomorrow for the ending of this story.

Posted by SonOfCthulhu at 12:37 PM