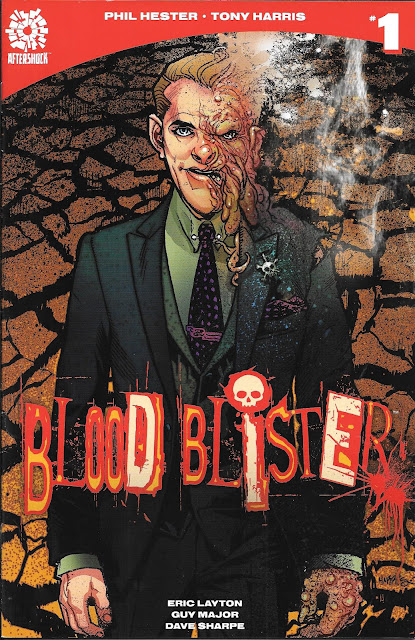 Get ready for a ewwy trip to Hell

“The Lusts of Your Father”

I’ve become something of a fan of Phil Hester and everything he touches. From his early work with DC and Marvel to his later stuff with the independent publishers, Hester really knows both ends of a story. He’s a great artist and he’s a decent writer. I’m still an ardent fan of his Mythic series and if I see one of his titles in the discount bin it automatically jumps into my “to buy” stack.

I wish there and been more issues of this one in my local store. Blood Blister certainly has a unique premise and I’d love to see where the rest of this tale goes. Is it redemption or just a study of evil? I’ll likely never find out, but maybe it will intrigue enough of you to plop down hard-earned coin to find out.

We begin with some fantastically stylized character art from Tony Harris and inker Eric Layton done up in vibrant colors by Guy Major. Seriously, the look of this comic sells much of the concept it contains and even though most of this is cartoonish, the vibe works well with what Hester is putting down. Here is Brand Hull, an attorney working for an unnamed firm signing on locals “the Travis’s” to a “class action” lawsuit against the state. 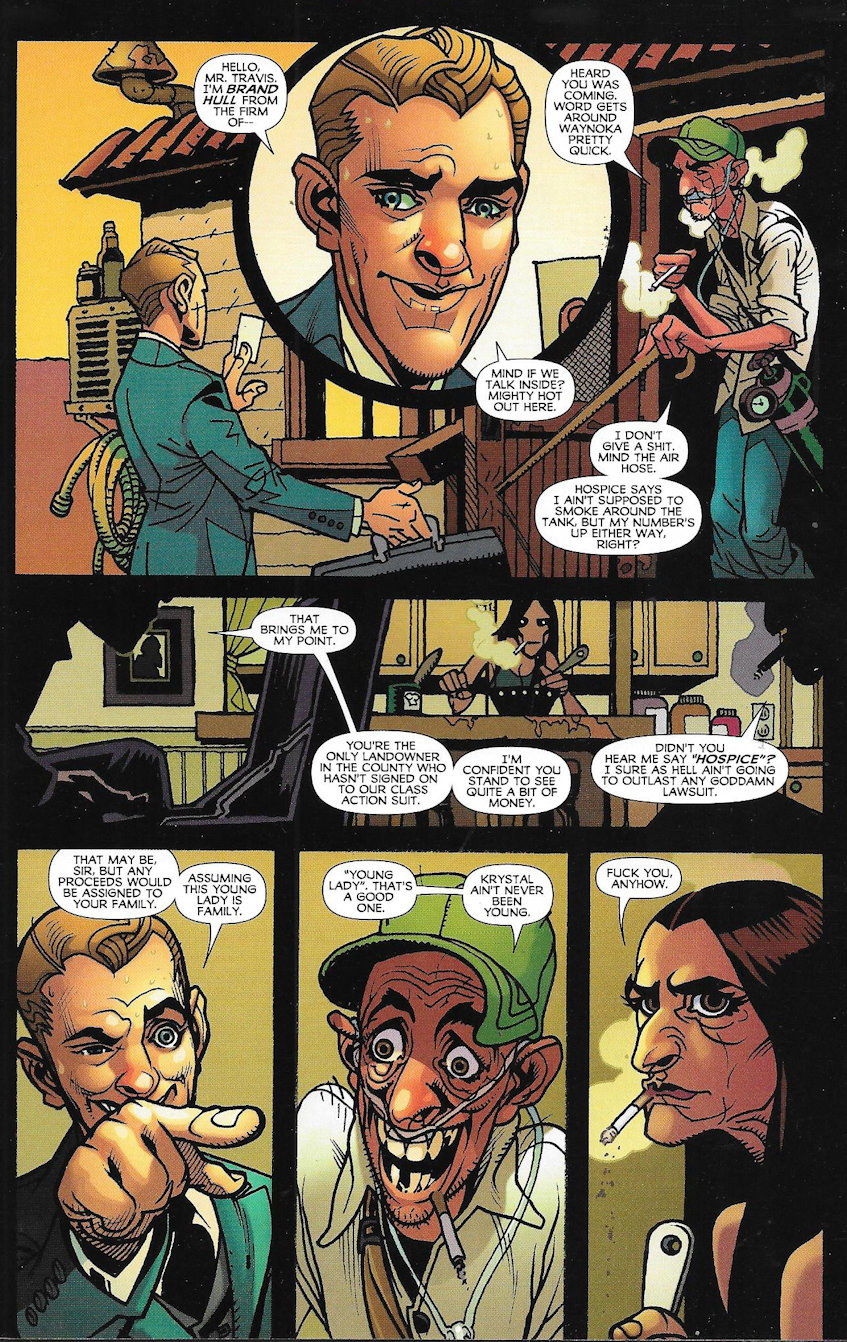 Neither of the parents have long to live, but their brain-dead daughter might benefit from the proceeds, since she was a preemie who got too much oxygen and now lives in a vegetative state. That’s her grotesque bloated form in the bed there. 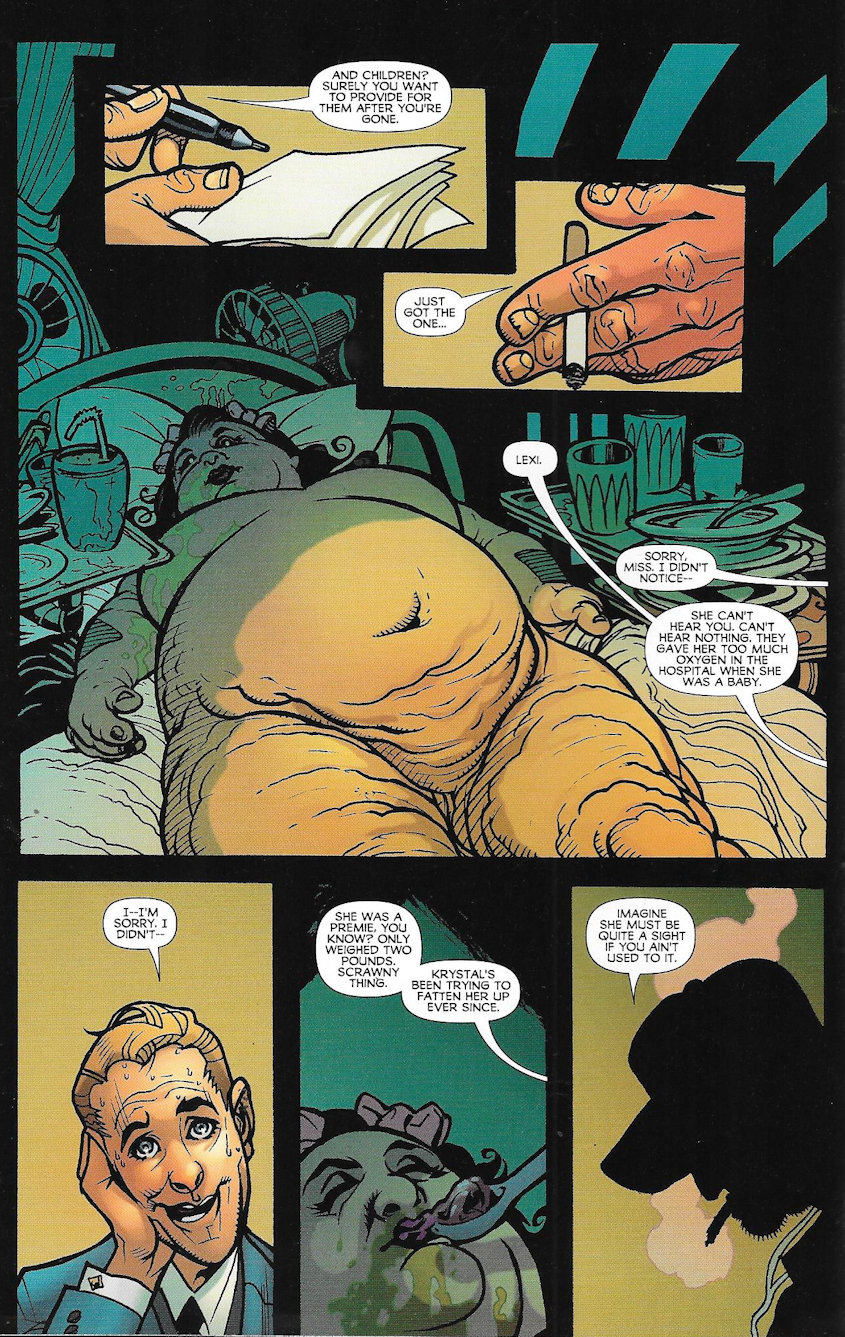 Travis is just about to sign off on the suit at Hull’s wily words, when daughter Lexi raises up out of the bed and calls Hull a son of the Devil! 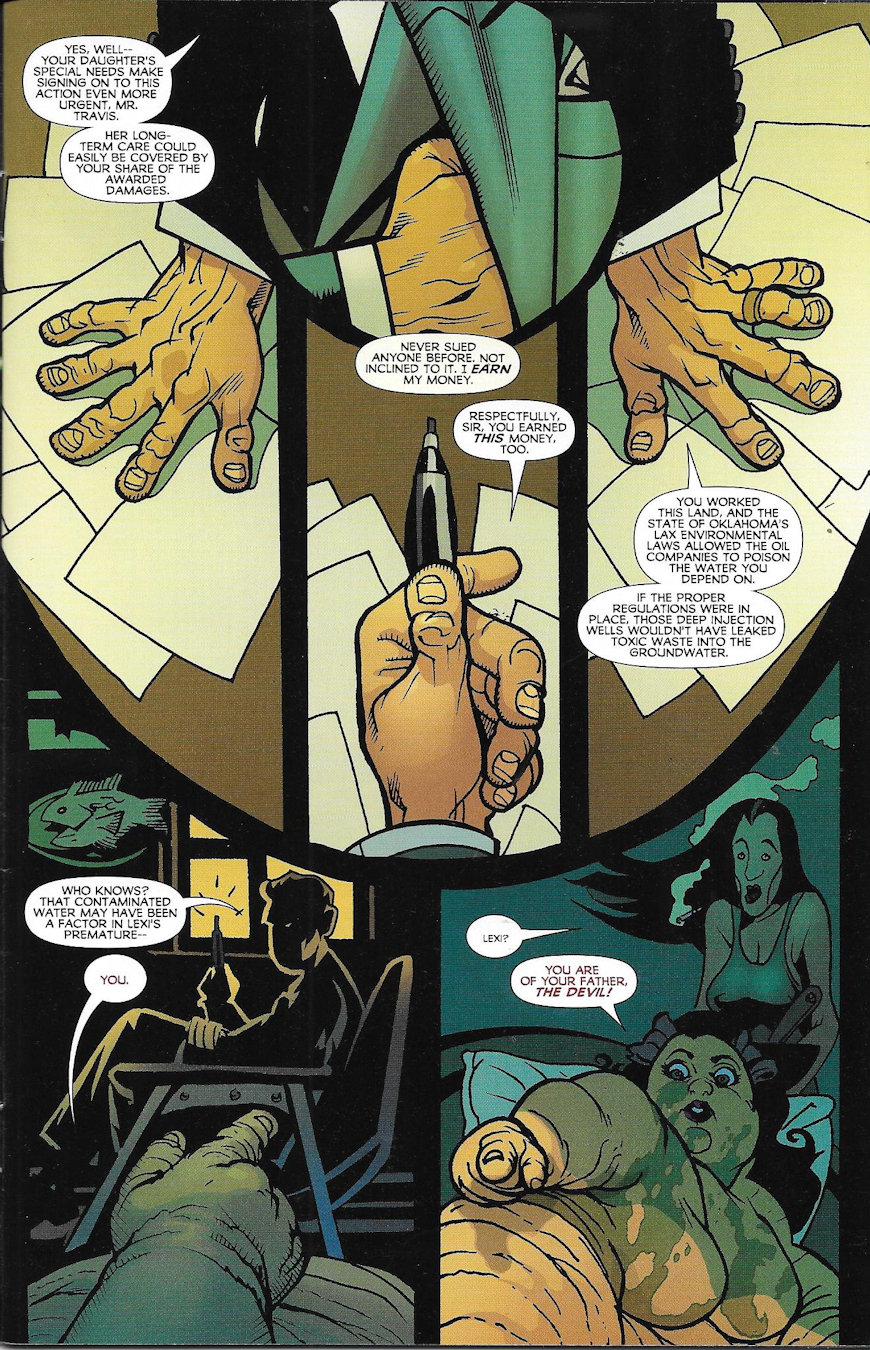 And then she quotes scripture. Needless to say this surprises her folks out of signing. 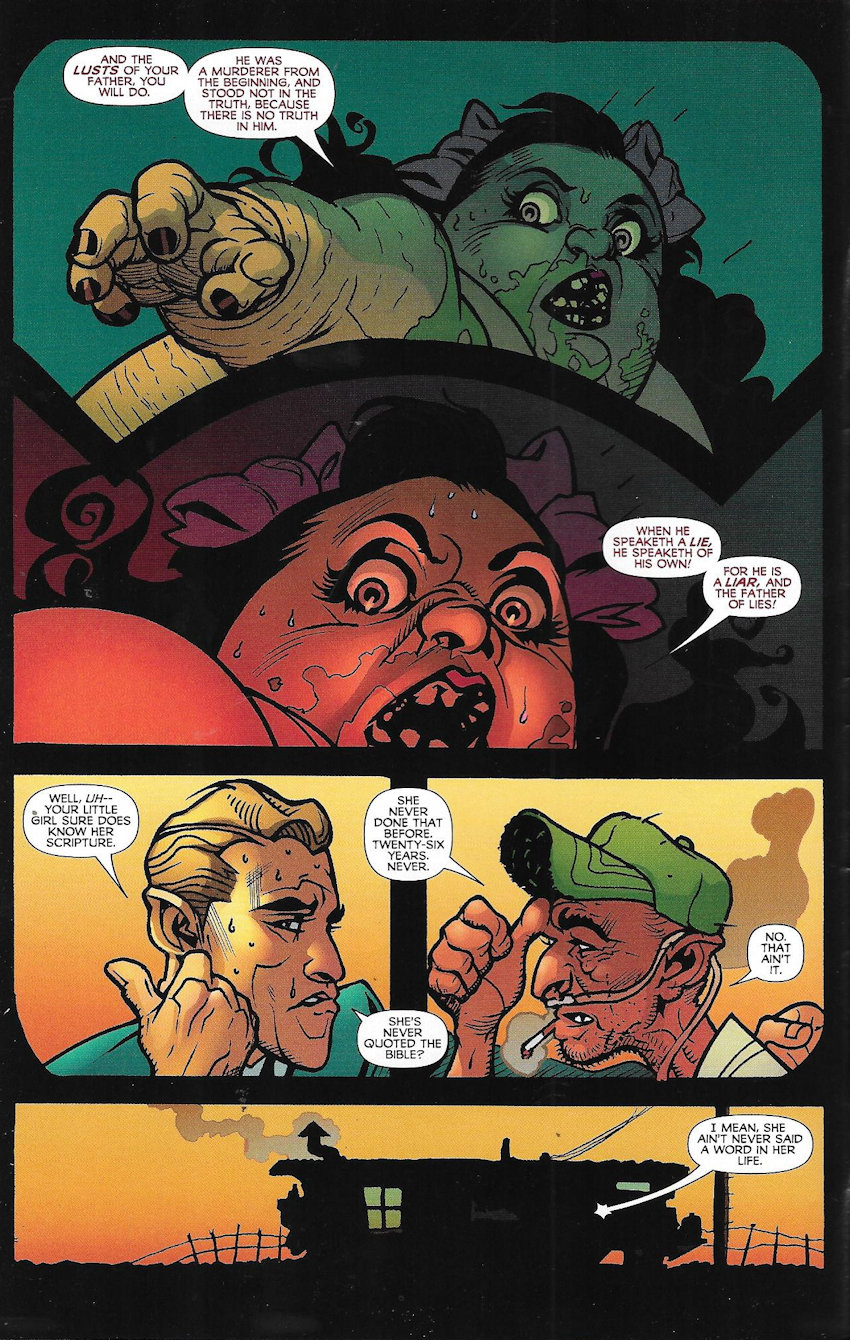 Hull is frustrated by this, as he was trying to get sign off on everyone for his employer, whom we will see in just a moment. For right now, however, we find him literally shoving a homeless man out of his way as he strides off. The implication of this is that Hull isn’t the do-gooder he seems, a point already made. 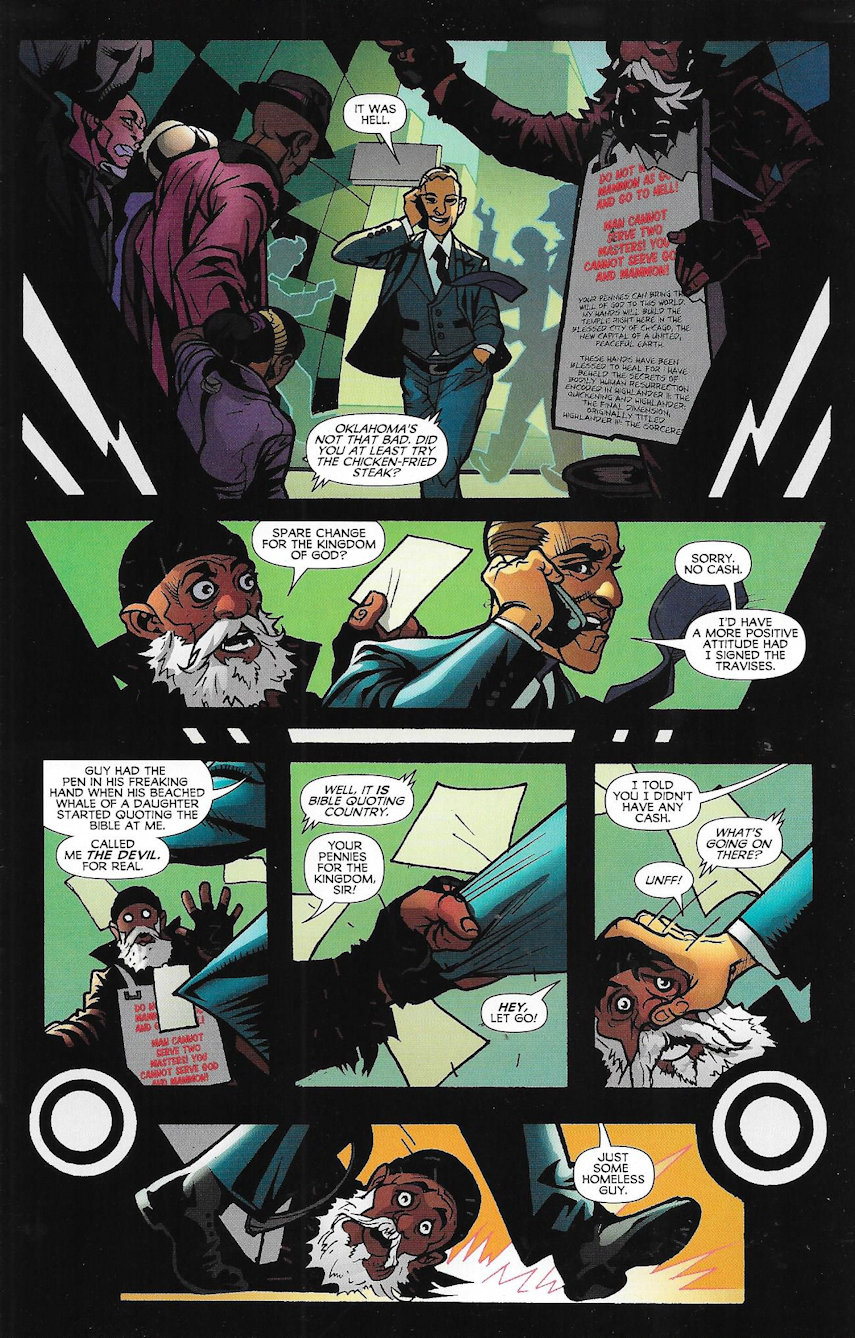 But to continue along this path, he chats up his secretary and hits the third level of strike-out: Hull is a deadbeat dad too. While he accosts the hobo with a revolving door, Hull also arranges for his secretary to drive his car and park it within sight of his son’s ball game so he can claim to have watched from his car. 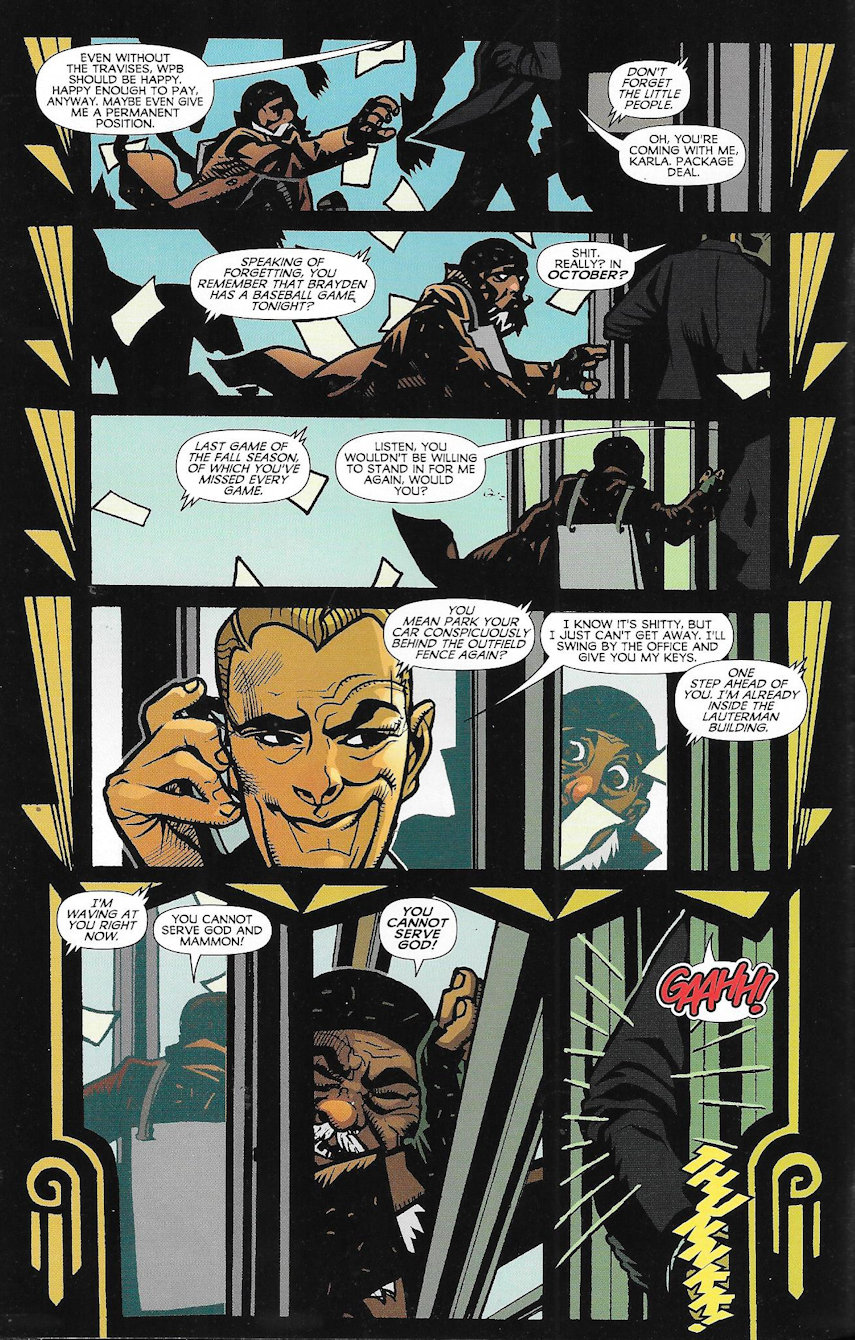 During this he’s meeting with his employer, the petroleum company that caused the environmental spillover and the public health hazard. Appears the class action suit is a ruse to tie up people’s time and effort suing the state while the real culprit walks away scott-free. 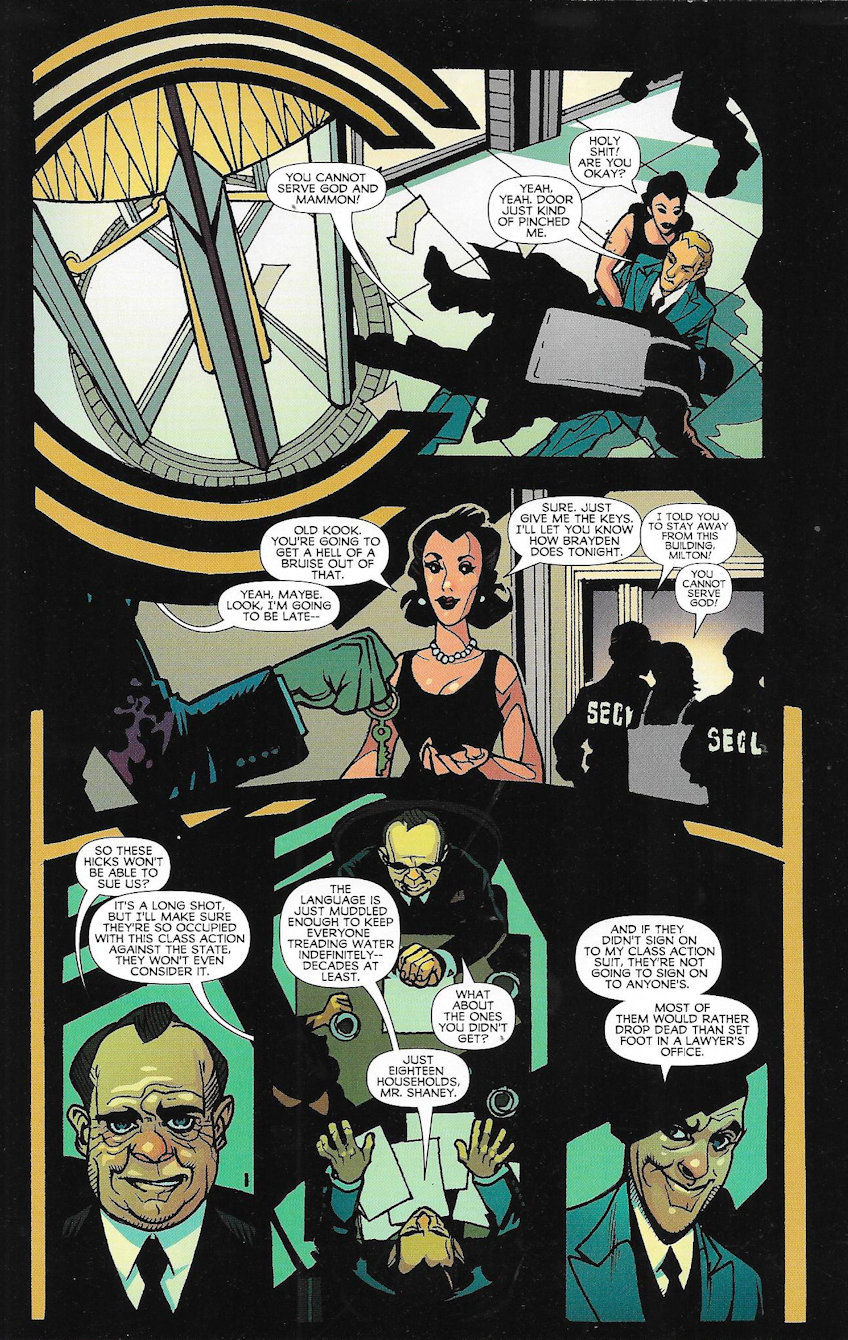 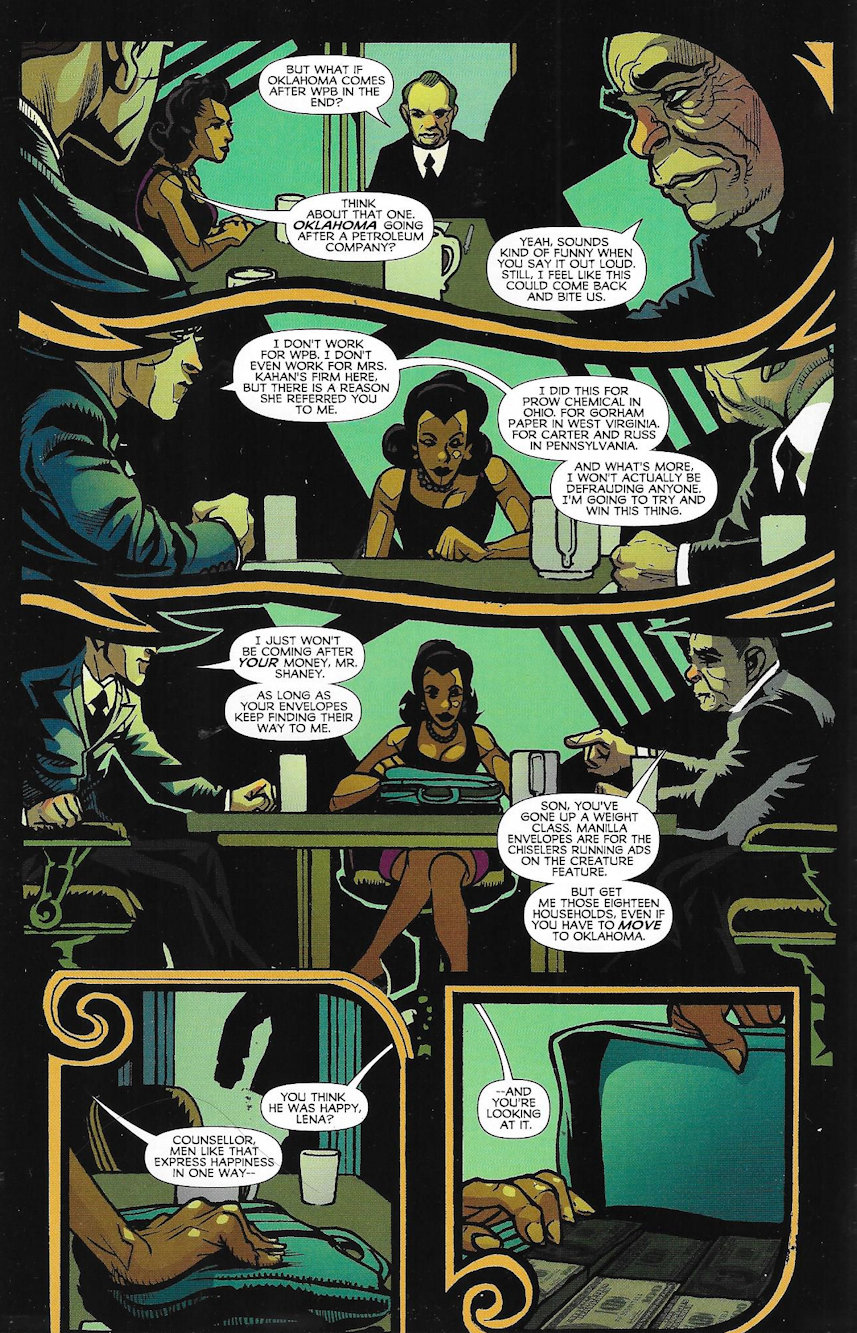 After this dastardly deed is paid for, Hull’s secretary gets in a bit of pickle because Hull’s son hits a homer right into his dad’s car windshield. Unable to step out and congratulate the boy, Hull’s secretary can do no better than to drive off before the boy discovers his dad’s duplicity. 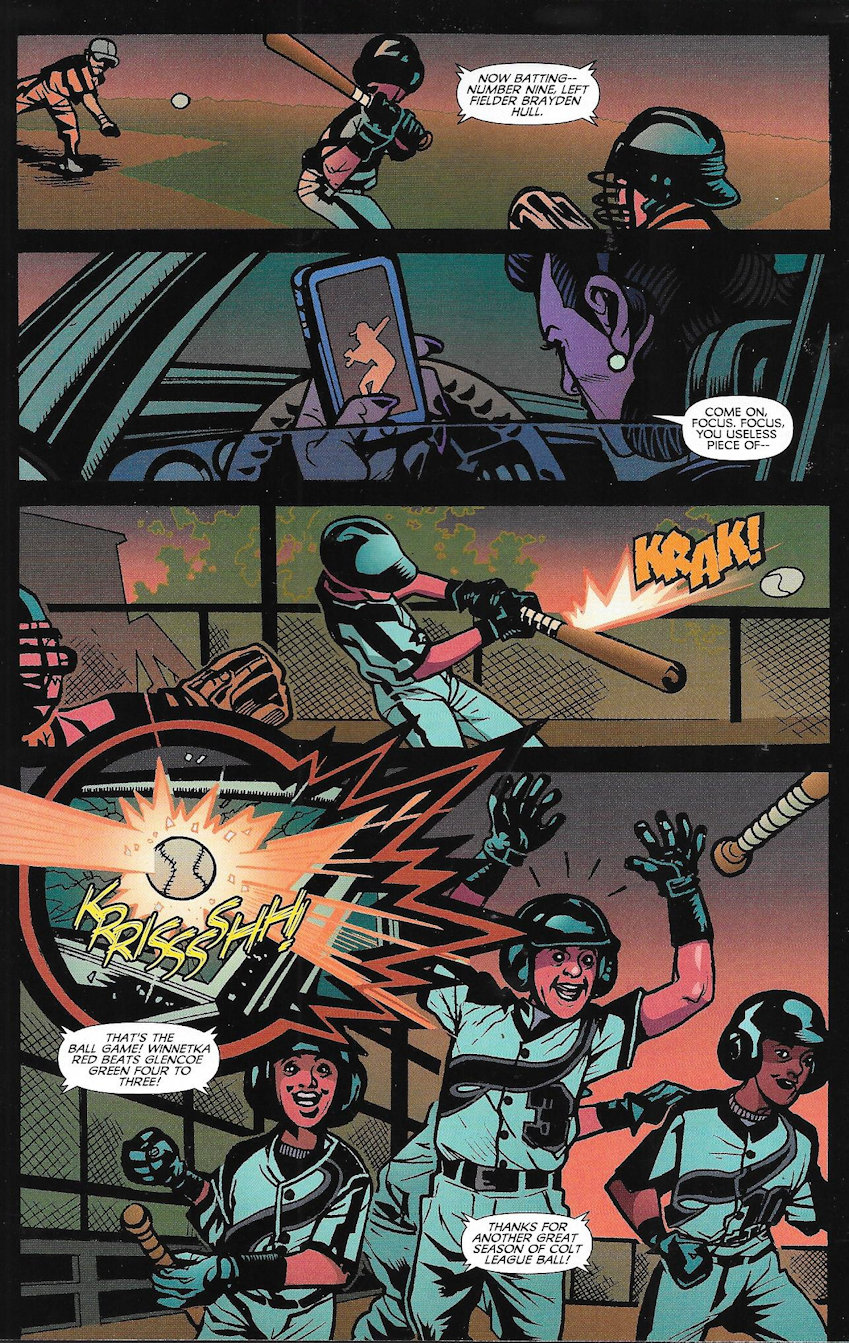 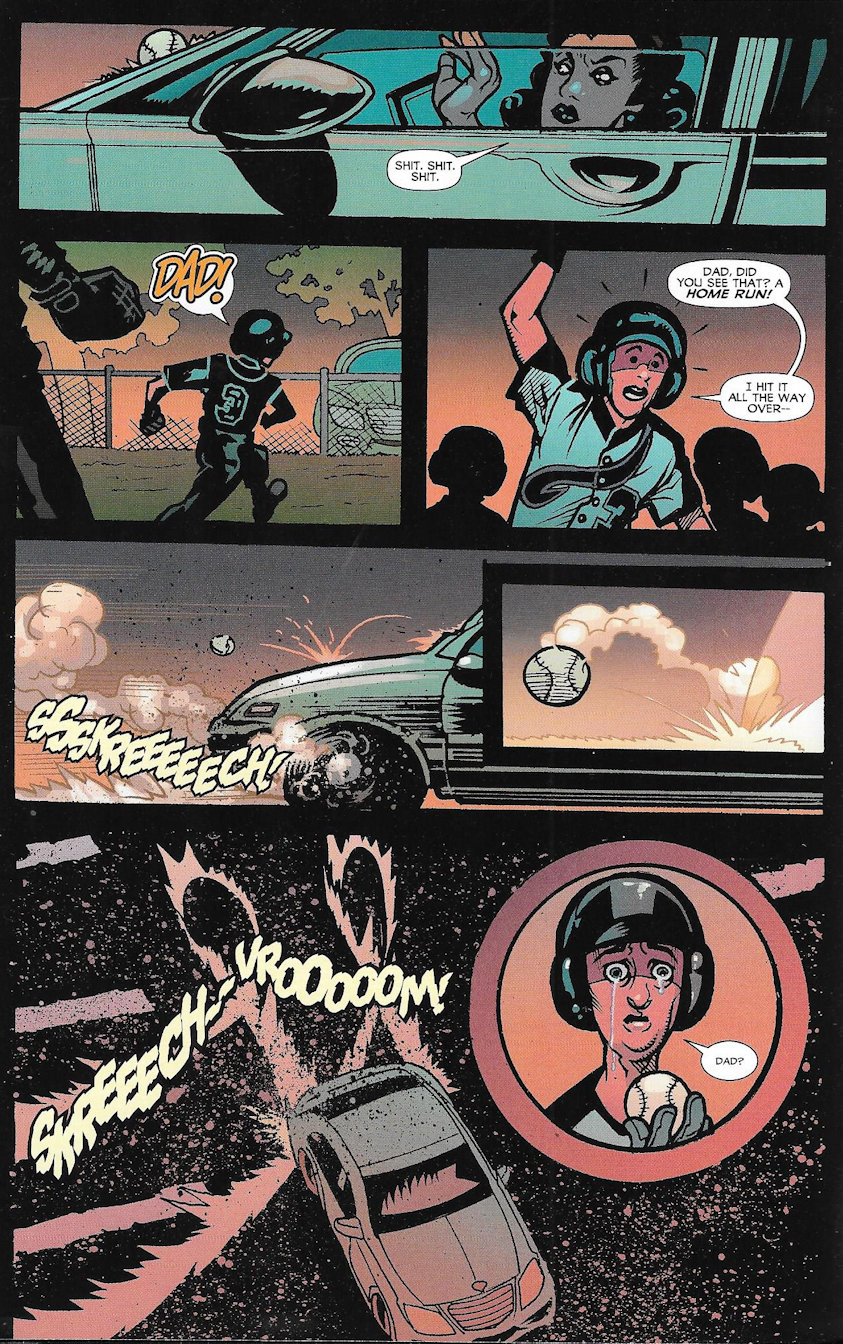 Later Hull is popping a blood blister while being chewed out by his wife for not stepping out of the car and seeing his son. Hull tries to cover by saying he’ll pick up his son after his shift at the local church haunted house. 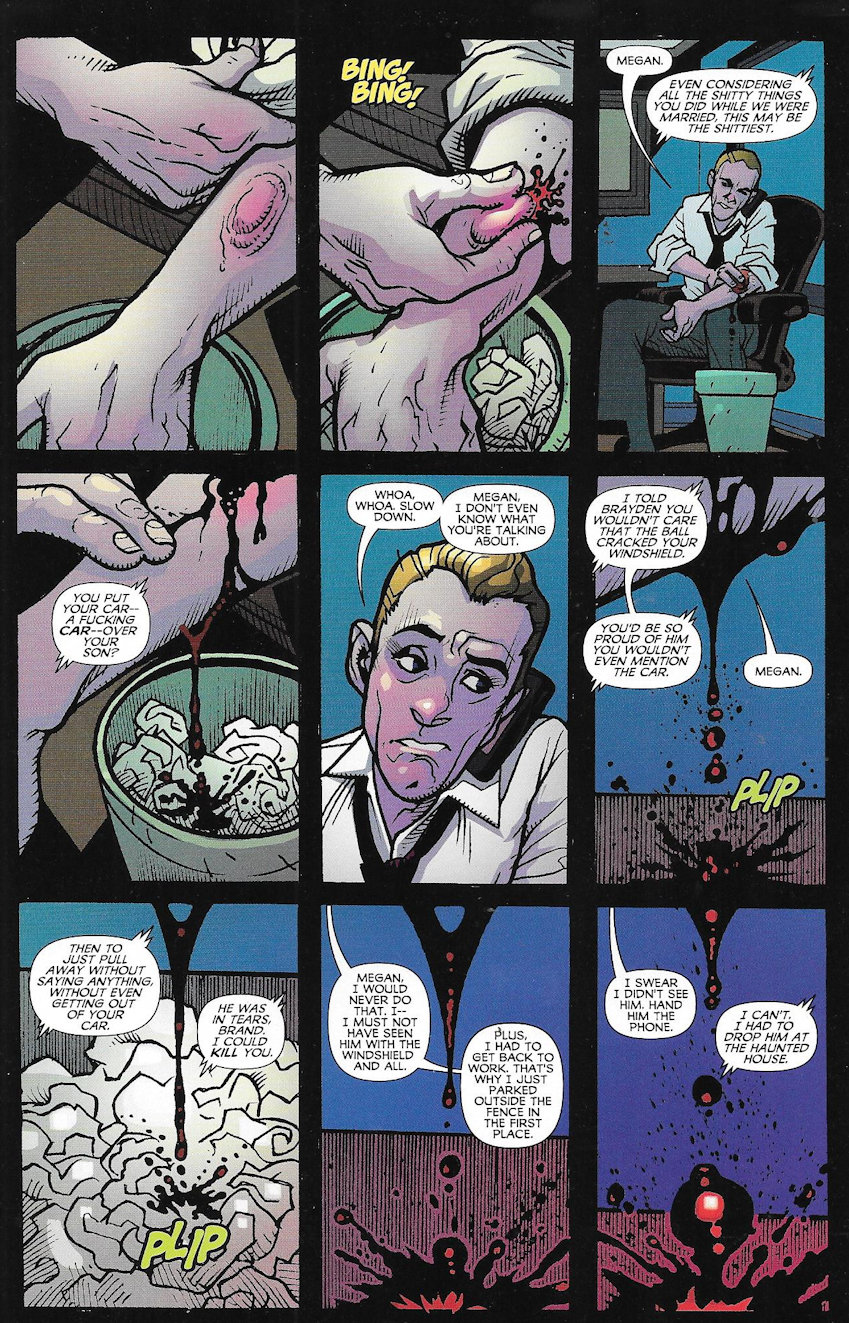 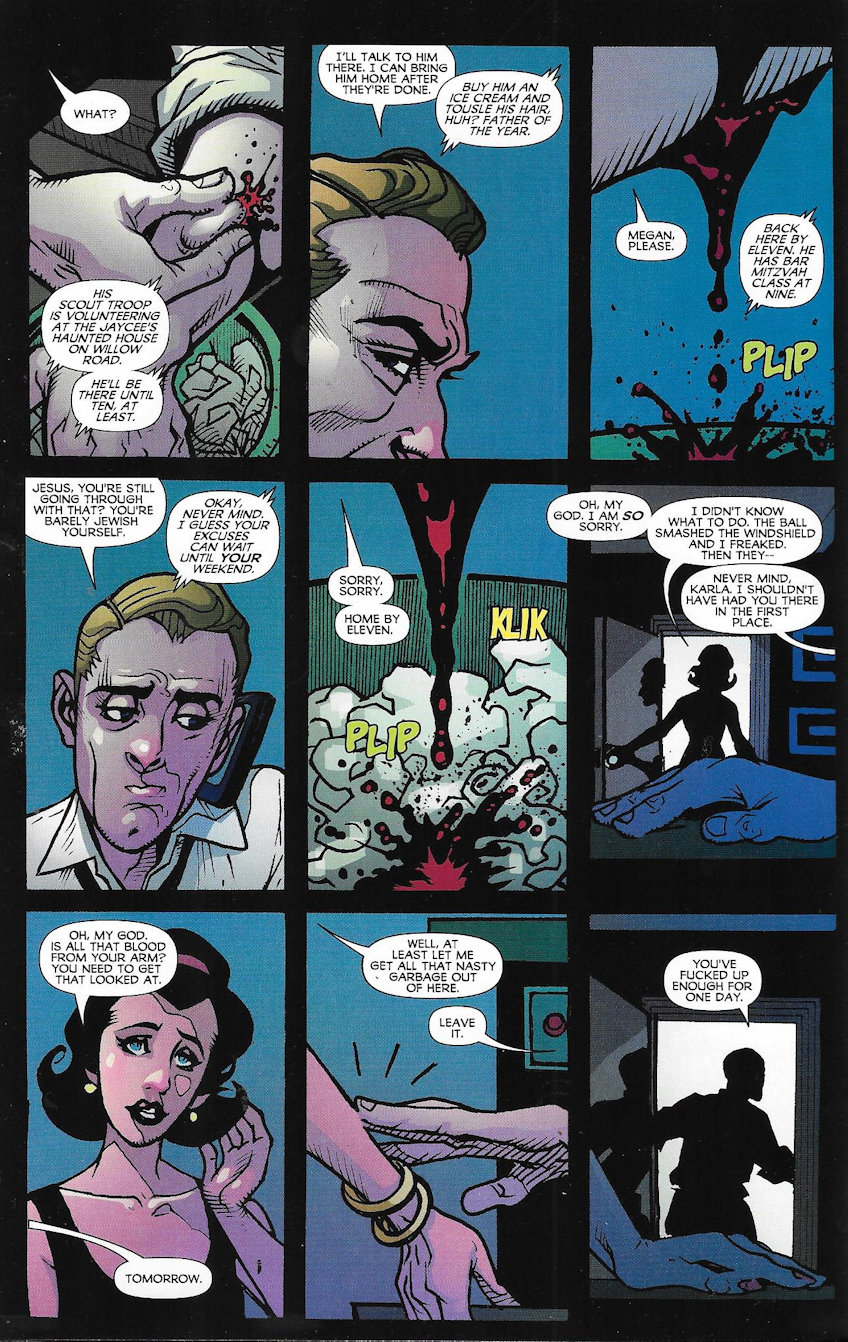 So our next scene is Hull going to pick up his son and having to walk through the haunted house to find him. Which starts off tame… 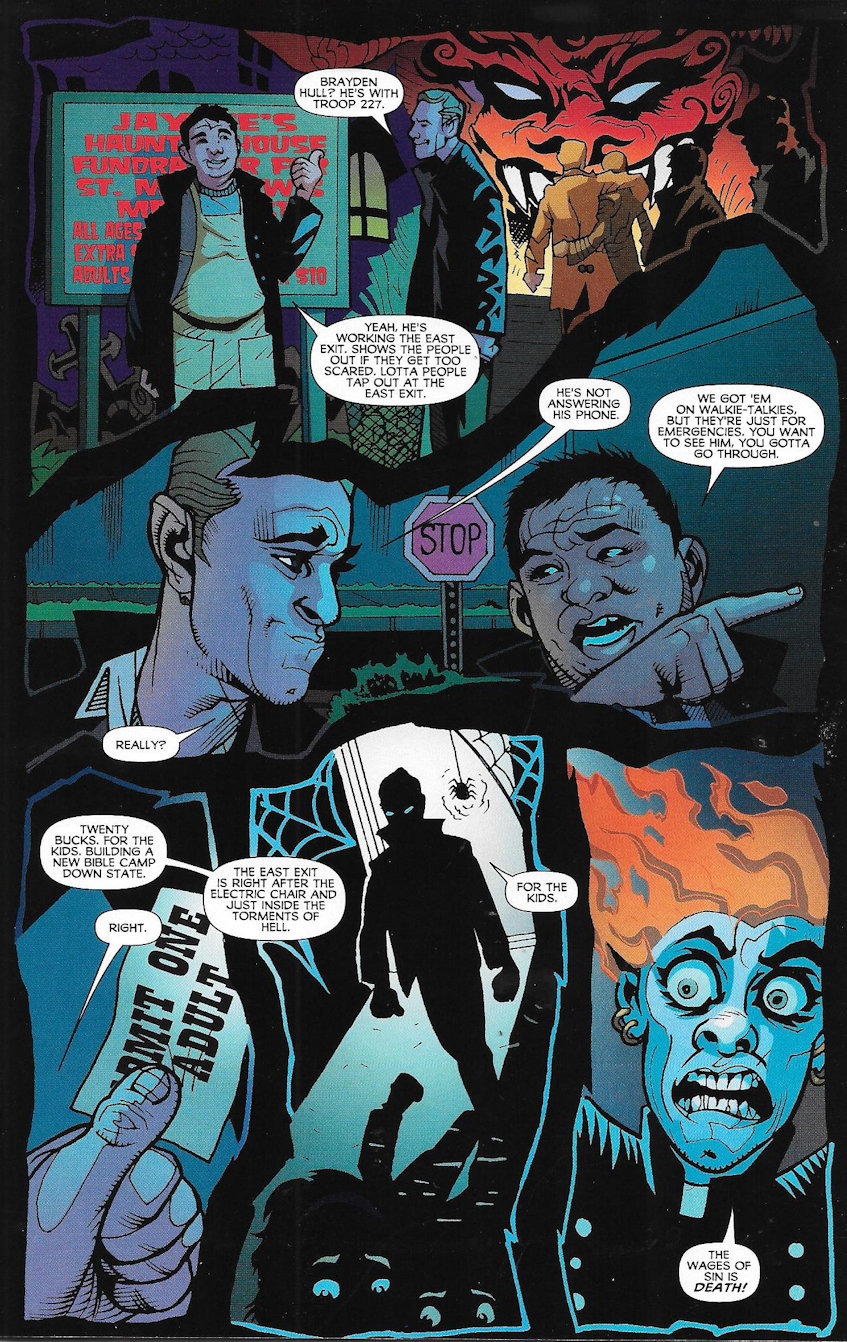 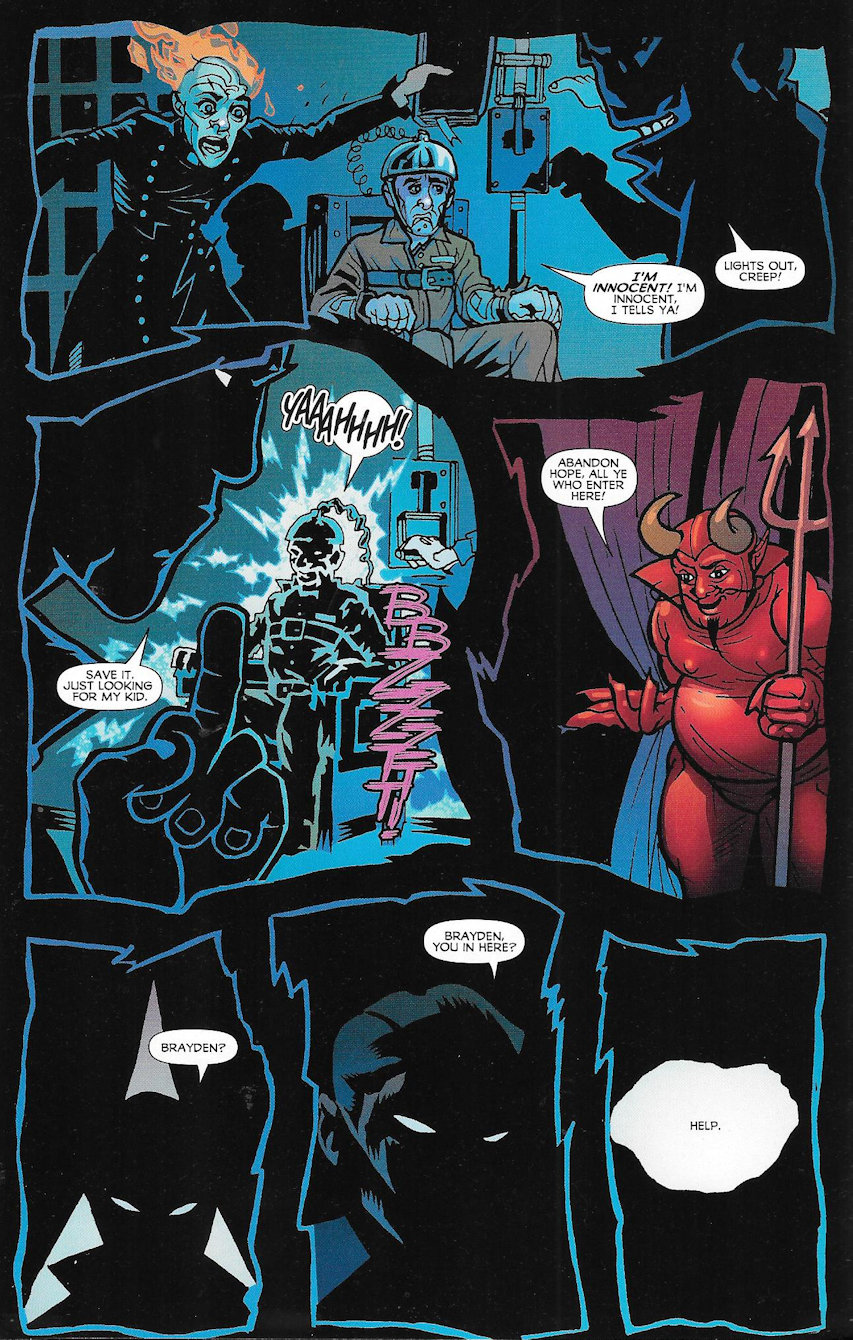 …until it isn’t anymore. Hull encounters a couple who can’t find their way out and claim they have been wandering the haunted maze for weeks. He discounts them. 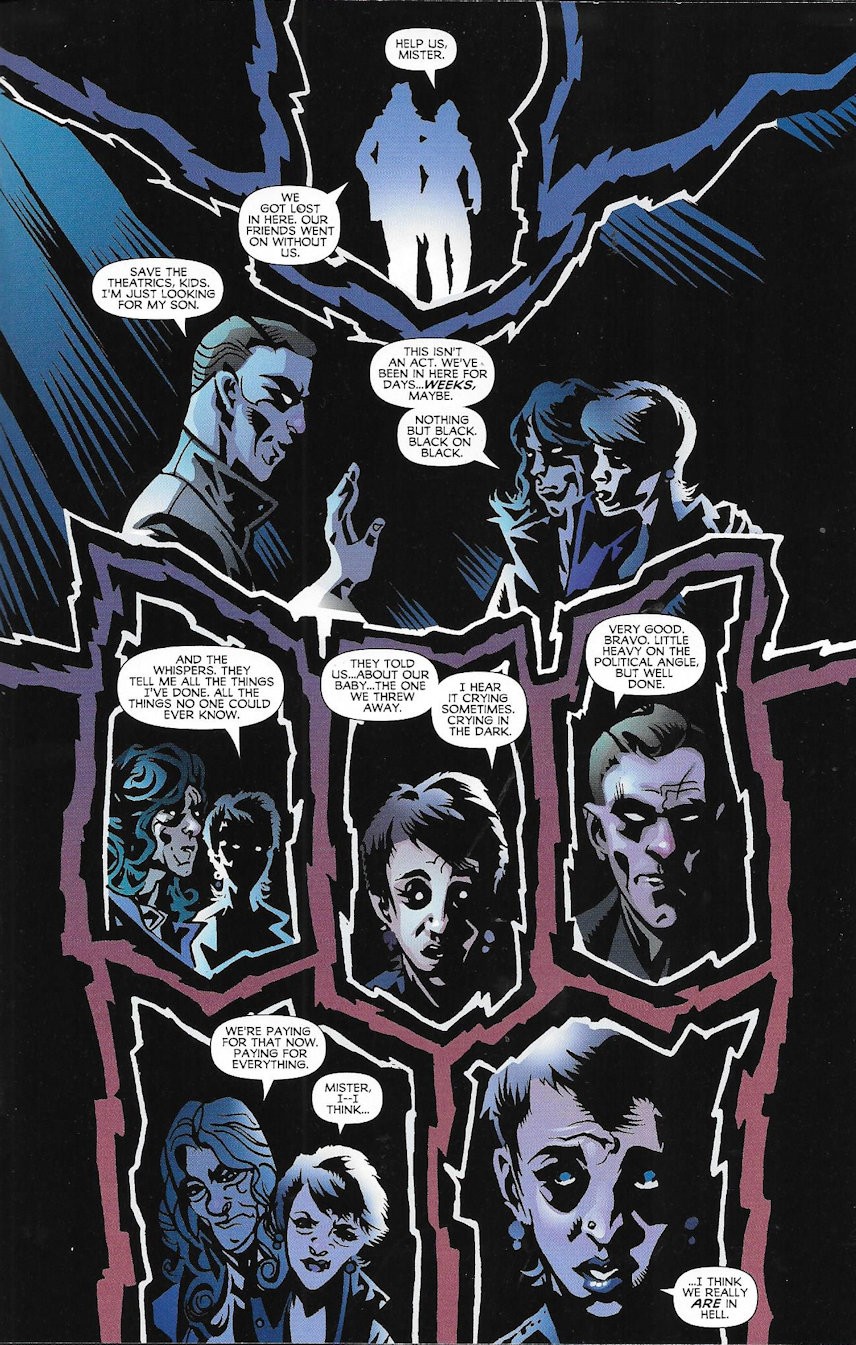 What he can’t discount is what happens next, when they are surrounded by babies… 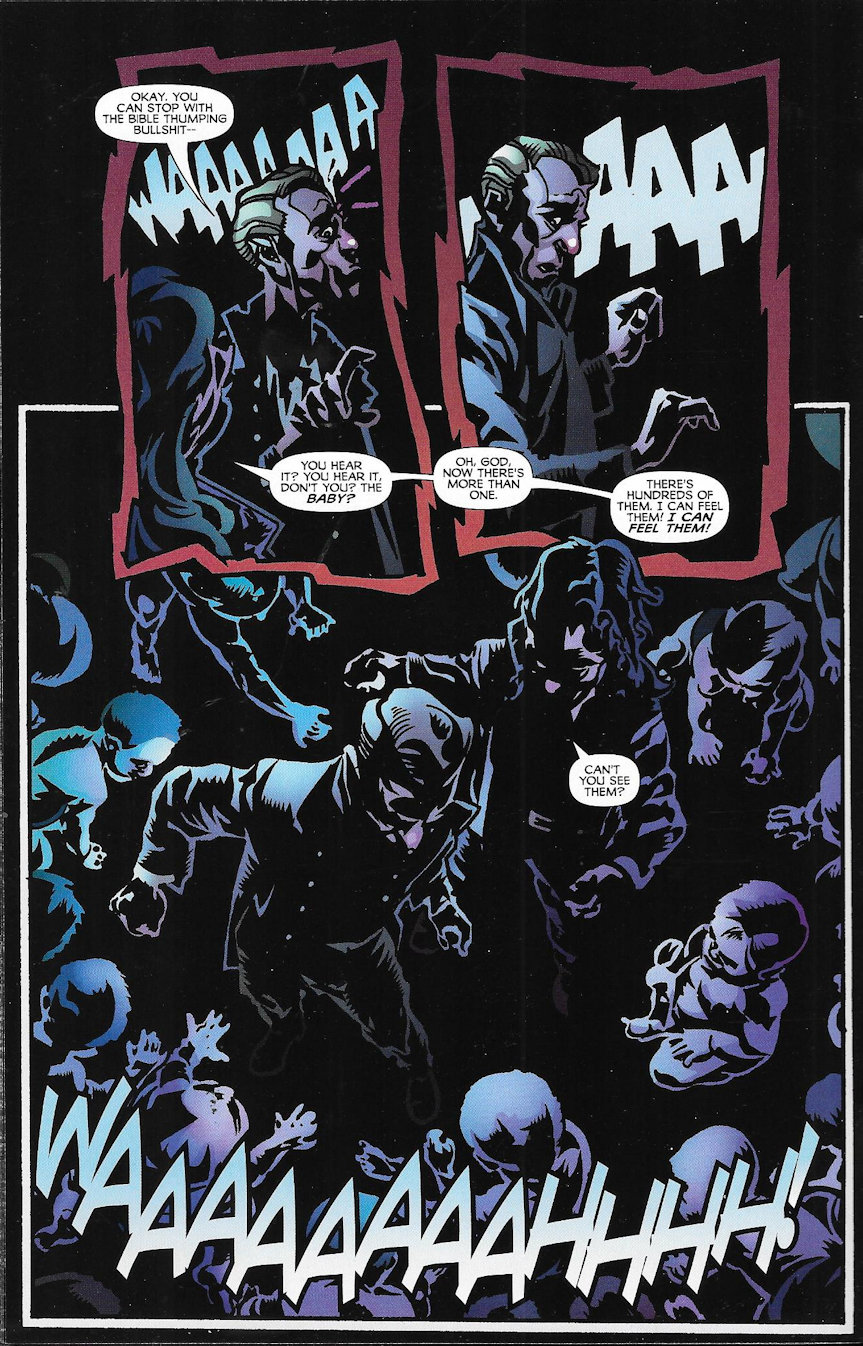 …two of which grow to gigantic size… 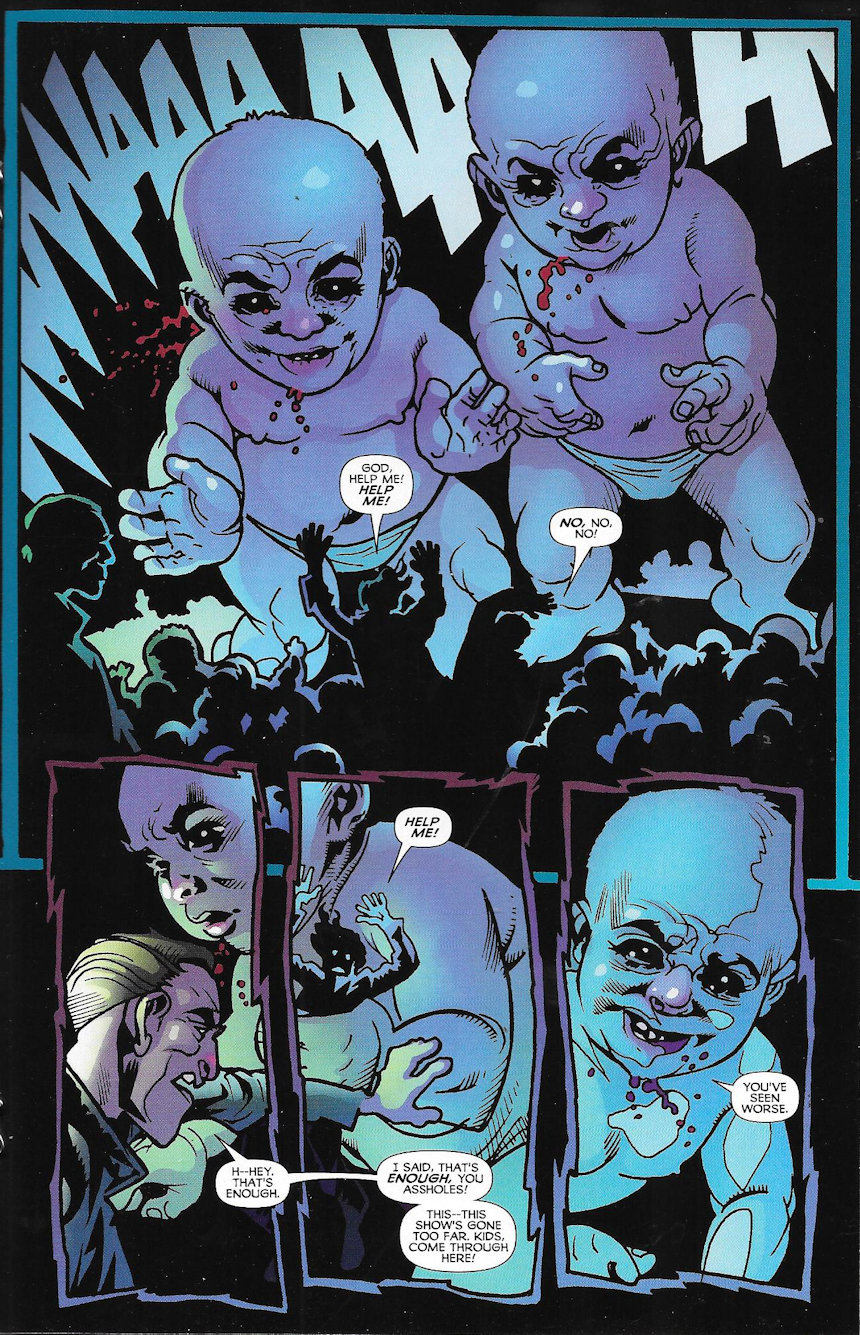 …and start ripping apart the pair of guests he just found. In a very realistic manner. 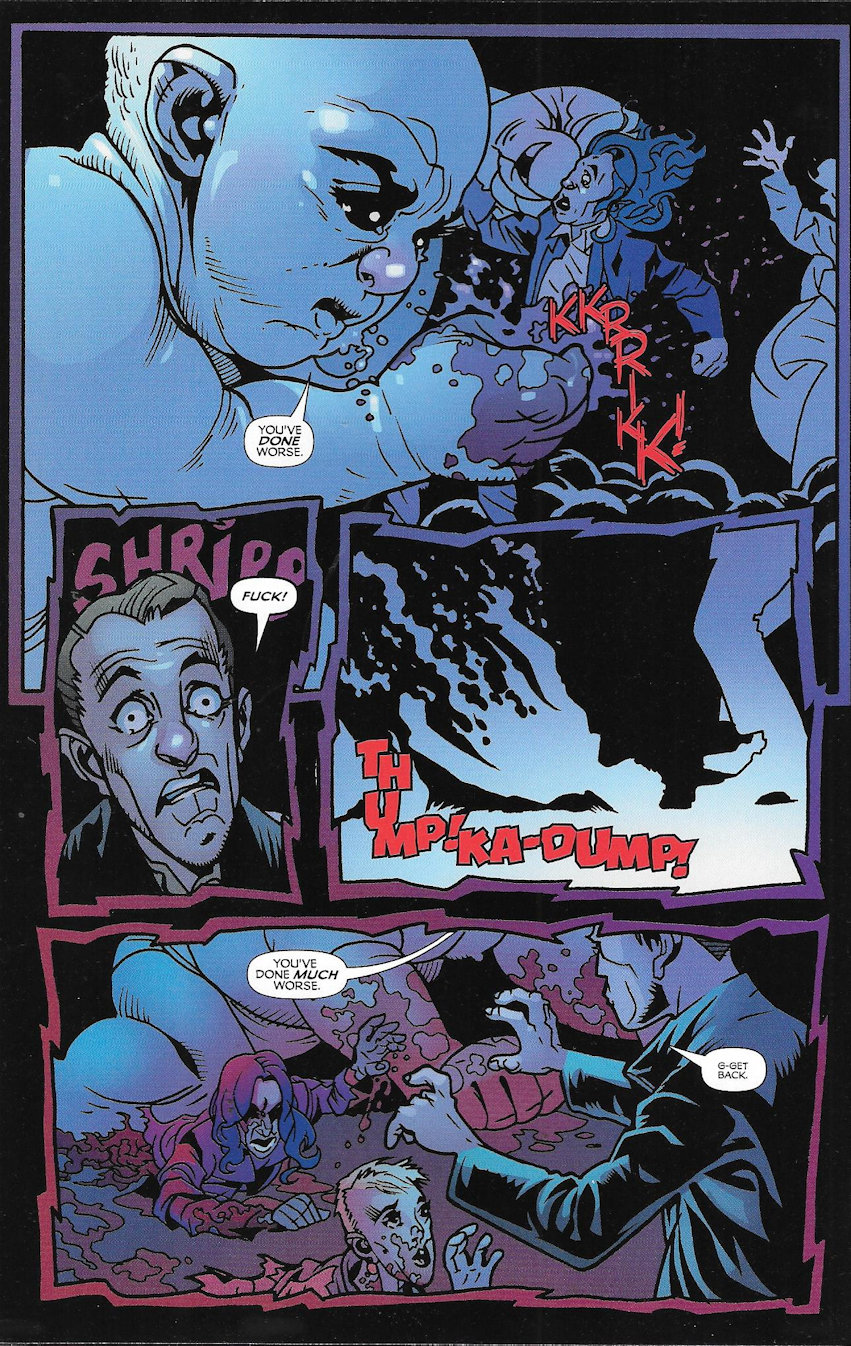 They claim Hull has done worse. And then the body parts and assorted devils surround Hull, claiming he’s different… 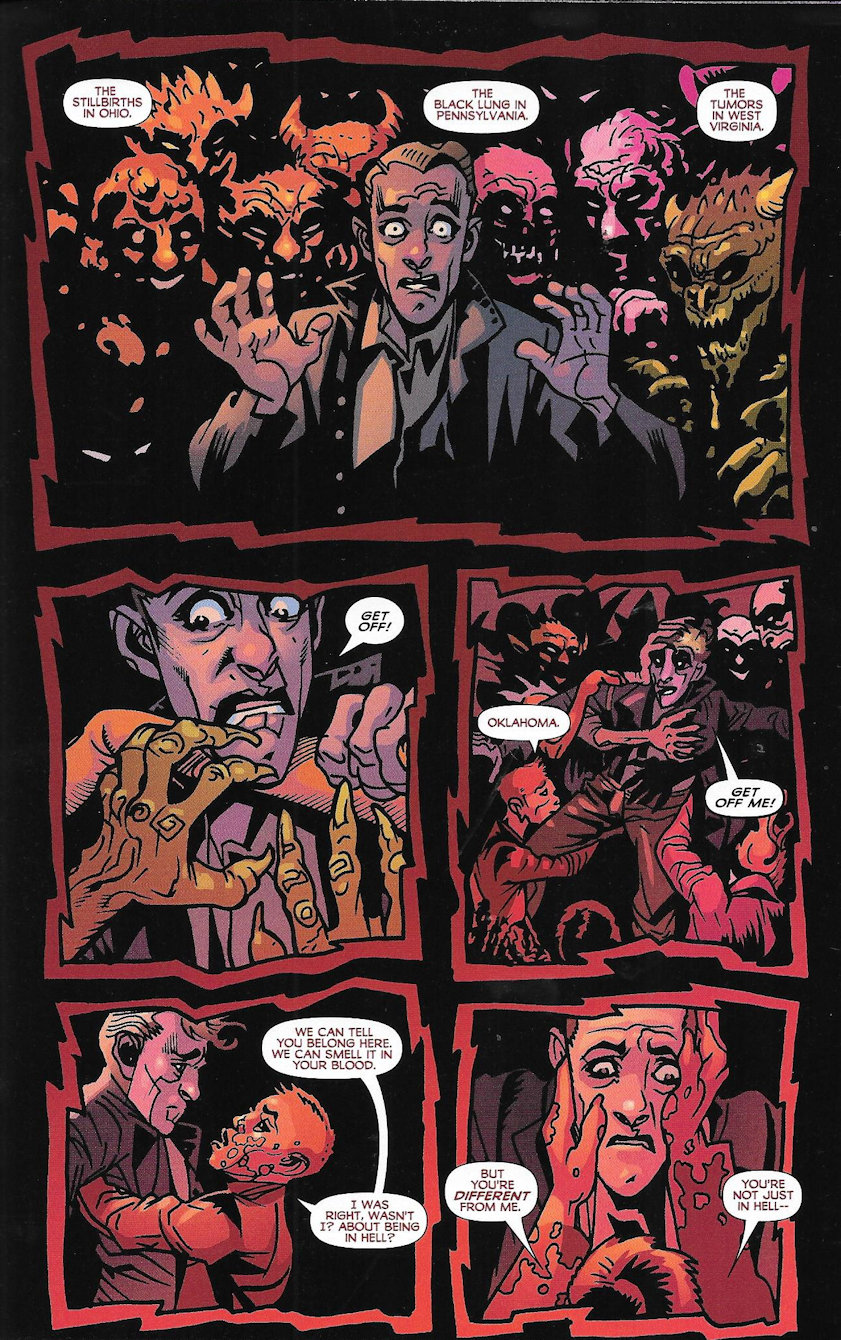 …and claiming this hell he’s in is his home… 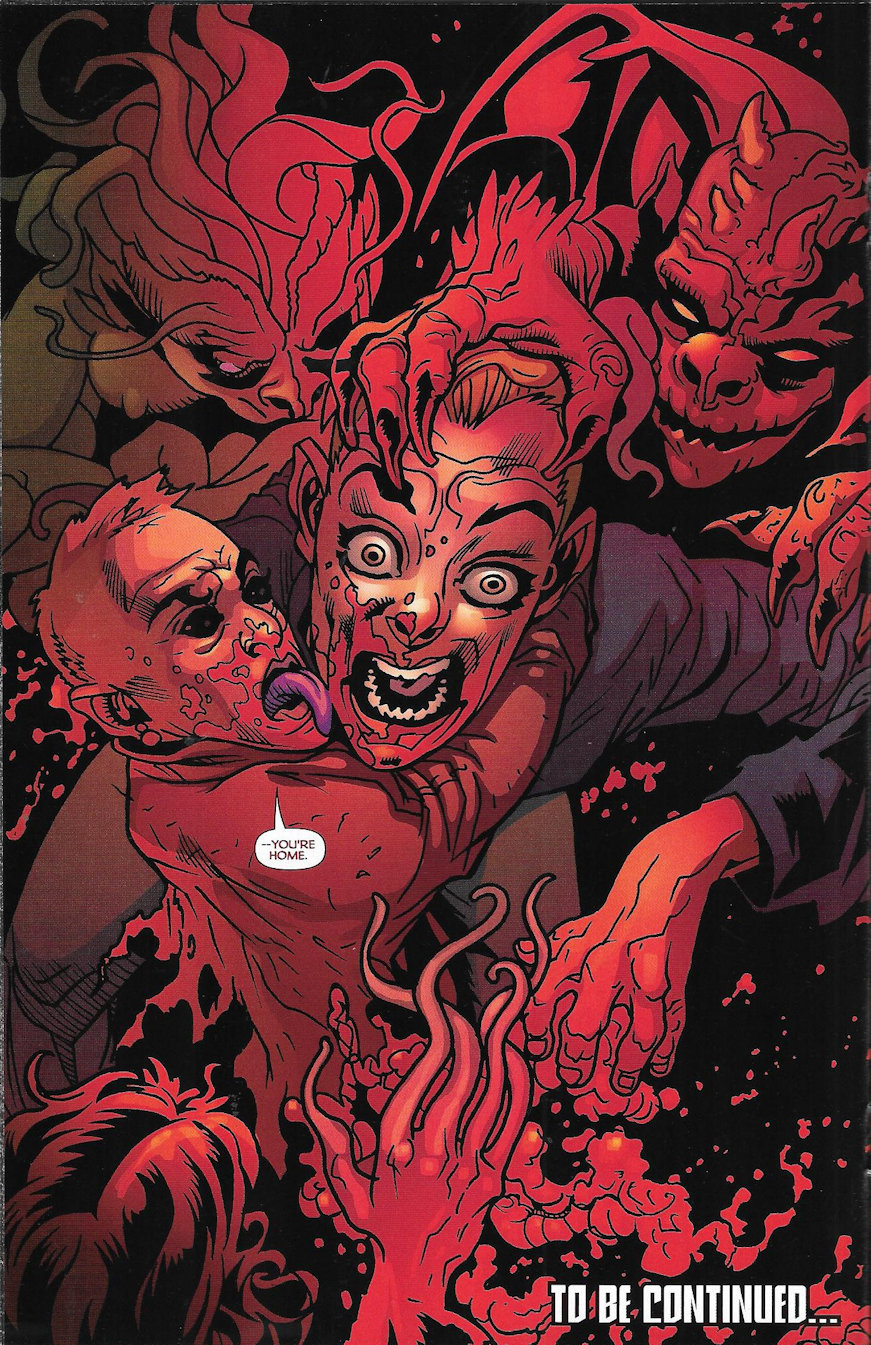 And that’s where it ends for issue one. It’s effective with a good hook. Like that it feels a bit Twilight Zone ish and would certainly pick up more if they came my way.

Posted by SonOfCthulhu at 1:31 AM