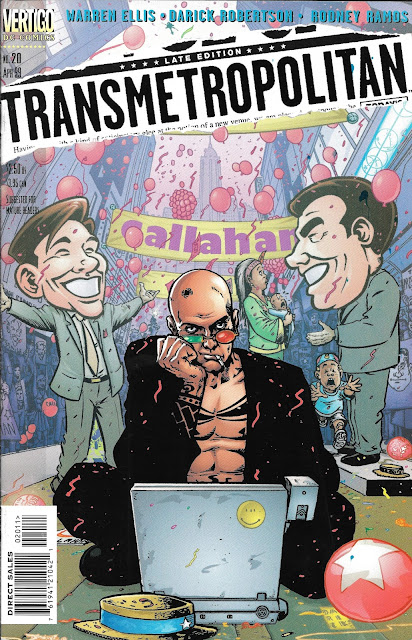 Because the future isn’t Gonzo enough

Transmetropolitan is an amazing series that I bought end-to-end in trades one summer from Half-Price. I remember reading it through all the way one time and LOVING every page of it.

The story takes place in a future where humanity has become disconnected from each other, much the way we are now. Our central character is a former journalist by the name of Spider Jerusalem. Ellis writes Spider like a futurist Hunter S. Thompson, a half-drugged out visionary who sees Rome burning and longs to both put out the fire and to fan the flames (possibly while roasting marshmallows on it). The huge series consisted of ten arcs wherein Spider takes down one presidential administration, nicknamed by Spider as “The Beast,” only to see the next become even more callous and cruel. Running out of time due to a medical condition, Spider works to remove this second President ( a guy by the name of Gary Callahan whom Spider nicknames “The Smiler,”) before it is too late for America.

The book frequently feels like a future take on Fear and Loathing in Las Vegas, and it lives and breathes around the antics of Spider and his two female helpers (nicknamed his “filthy assistants”). Ellis captured the very soul of the real-world figure he sought to star in his drama. Just like Thompson, Spider weaves in and out of future culture in such a way that you find truths in the oddest of places. It is a meandering, roundabout story that takes its time getting its legs out from under it where Ellis creates a great timeline and characters, placing the plot of uprooting the government structure on a long, slow burn that spools out over sixty issues to properly tell. The strange thing? It remains entertaining and enjoyable, the antics of this odd but wise degenerate anti-hero playing out at such volume that we can't wait to see what he does next.

It’s enough to make you believe in the quote from Hunter S. Thompson “I hate to advocate drugs, alcohol, violence, or insanity to anyone, but they’ve always worked for me.” It works for Spider too. Oh, one more to add to that list, though: technology. In Spider’s future, technology is just one more way to tune in and drop out of the world around you, a fact that many issues make a point of showing. In all, it’s a future you wouldn’t want to live in, but one that draws parallels to and makes some pointed remarks about our present.

This issue, number 20, comes at the beginning of the fourth story arc and the start of the rise to power of The Smiler, Spider’s chosen one to replace The Beast. However, from the very start Spider appears to have second thoughts on which of them is the lessor of two evils. In the last arc, Year of the Bastard, The Smiler orchestrated the death of someone close to Spider and now he is seeking the presidential nomination.

At present, Spider has descended to the city streets on a sort of walkabout, absorbing culture and society by mixing with it, becoming a part of it and then commenting on it. The title of this is “The New Scum” and it refers to the full-page pictures of people Spider encounters as he wanders the streets seeking the soul of The City. It’s always assumed by me that The City itself is future New York although this is never confirmed.

Anyway, here is Spider immersing himself in The City. 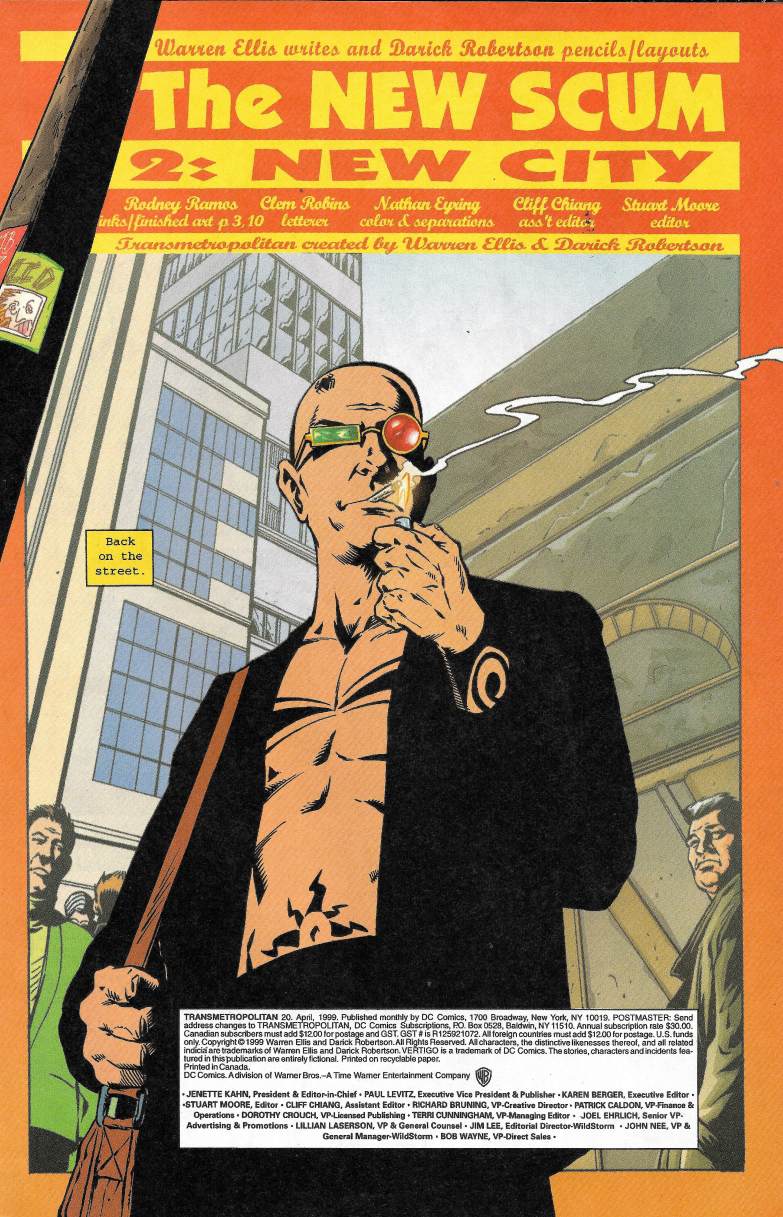 Spider’s narration really sells the Thompson vibe that Ellis attempts to capture, that plus the more nihilistic bent to everything he says. Spider is the savior of the city yet he refers to himself as something darker and deadlier. Perhaps due to a belief by Spider that the collective “we” of society isn’t something worth preserving in its present state. 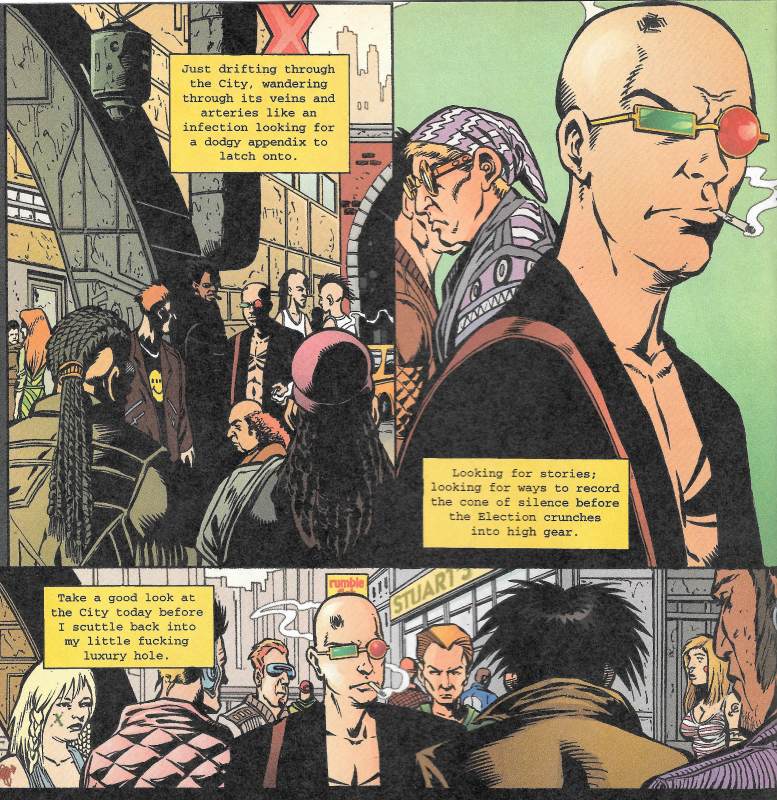 Case in point, these jackasses. 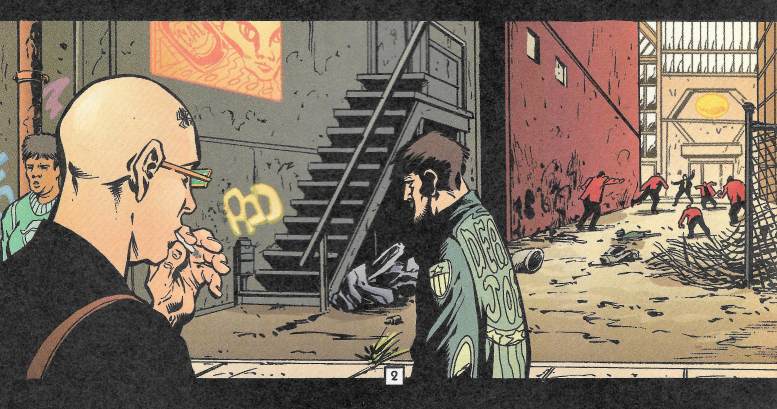 Spider rushes down the alleyway to find a group of fellows dressed identically, like a gang from the movie The Warriors, stoning a citizen. Spider interrupts them to get to the bottom of things. Since he is so well known, they stop and offer an explanation. 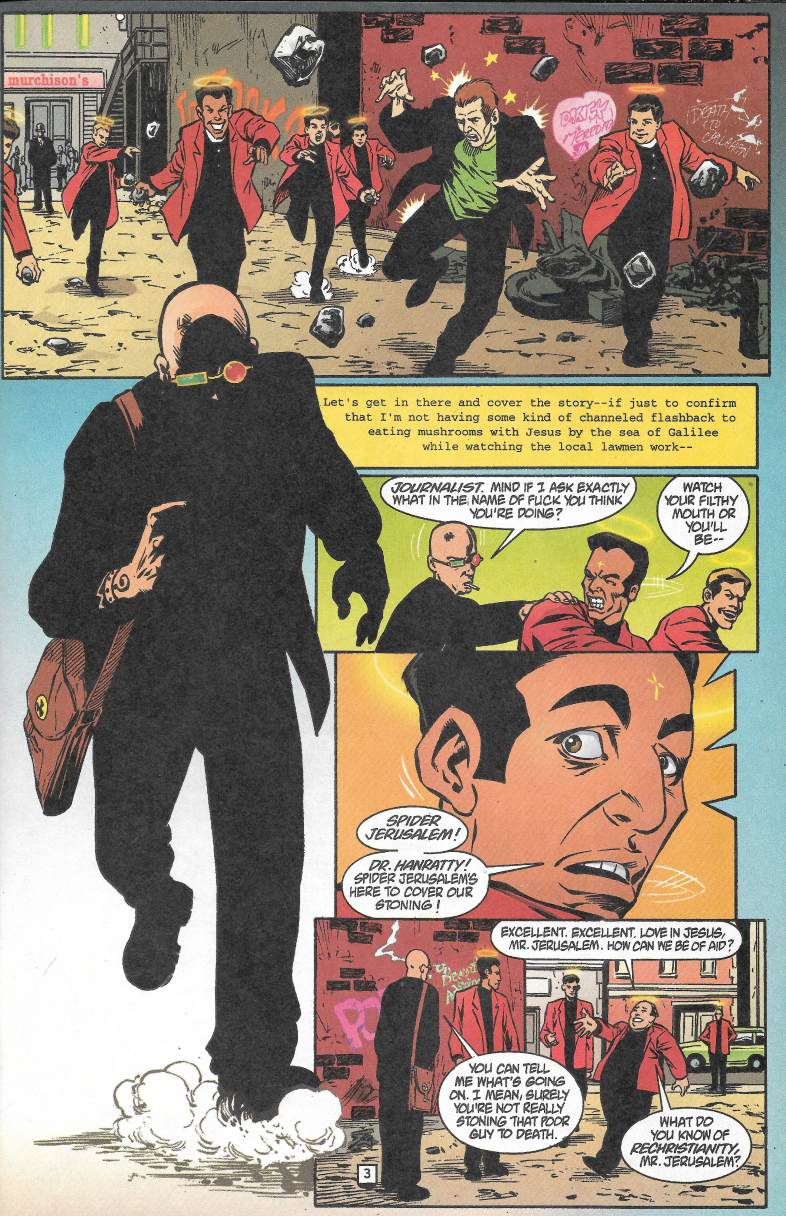 These six are members of the church of Rechristianity, an extreme branch of religion that believes in returning to the fundamental precepts of the Christian faith, or at least that’s what they are doing according to their spokesperson. This apparently includes killing people instead of forgiving them. 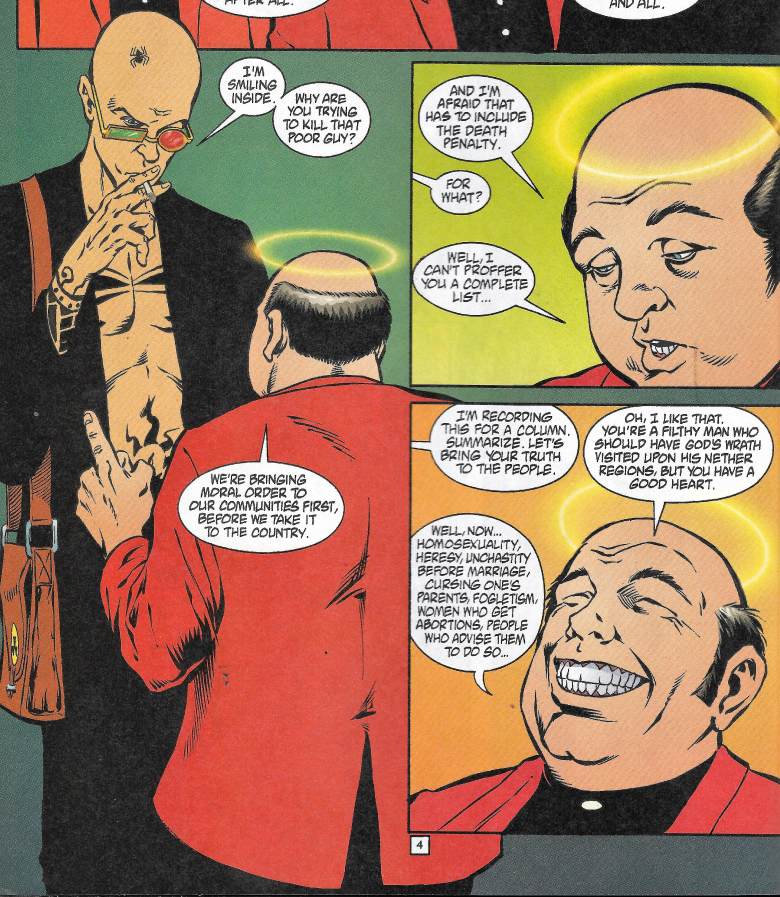 Spider asks why stoning, which anyone could tell you is Old Testament type bull-plop. He could argue at this point about Christ saying let he who is without sin case the first stone…but instead… 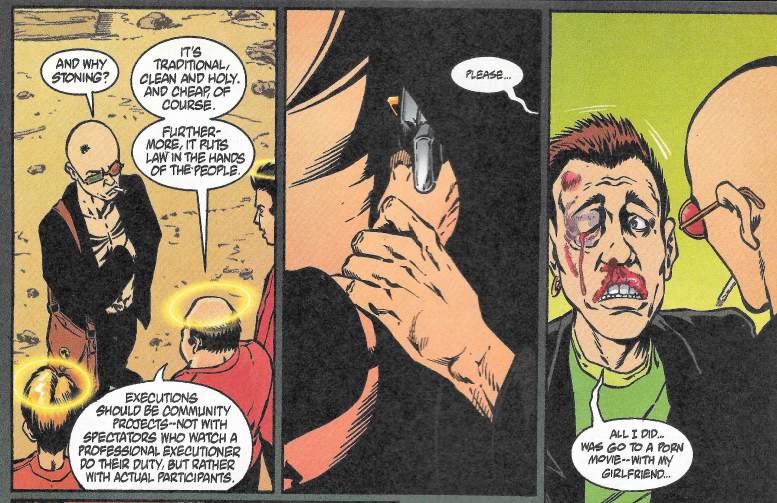 …Spider’s my kind of hero. The kind that comes with a gun that makes his enemies have explosive diarrhea. 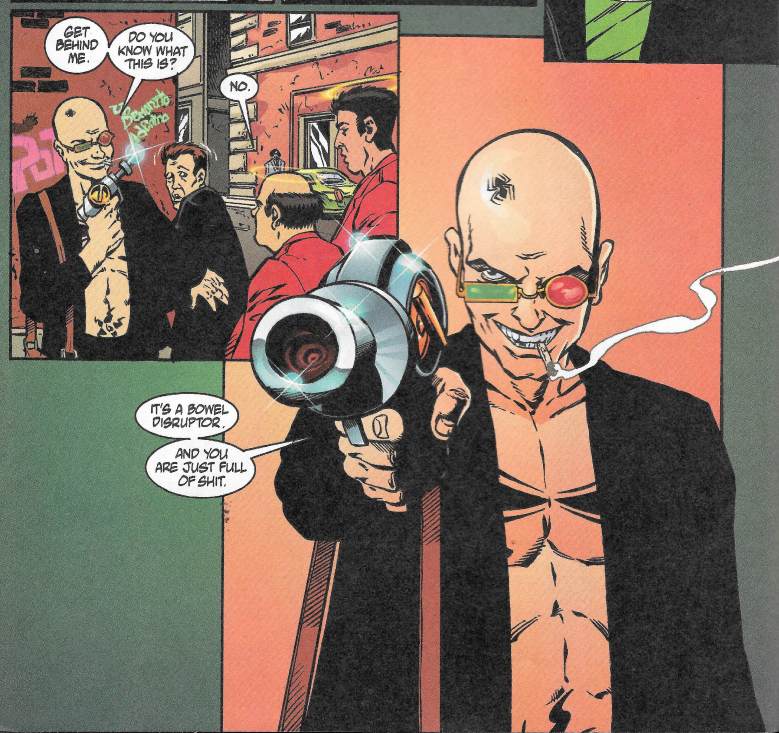 With this first sequence finished, we have to speak a bit about Darick Robertson, the American artist who brought Ellis’s vision to life. Robertson is a hugely gifted artist with a list of works as long as both my arms. I “discovered” him through his recent work on The Boys with writer Garth Ennis, but his art is littered through-out the crapbox. I have a bunch of respect for Robertson. In the right books, his style is just the right mix of realism and comic art to “sell” the idea of a persistent world at play. Transmetropoltian and The Boys both prove this point in different ways with Robertson’s stylistic contributions adding to the darker tone of each.

With that being said, we get back to Spider as he wanders the streets of the city under the ever-present specter of the coming political fight and his adversary, The Smiler. The streets are full of more than just the hustle of business people and commuters, Spider realizes. There is something going on here… 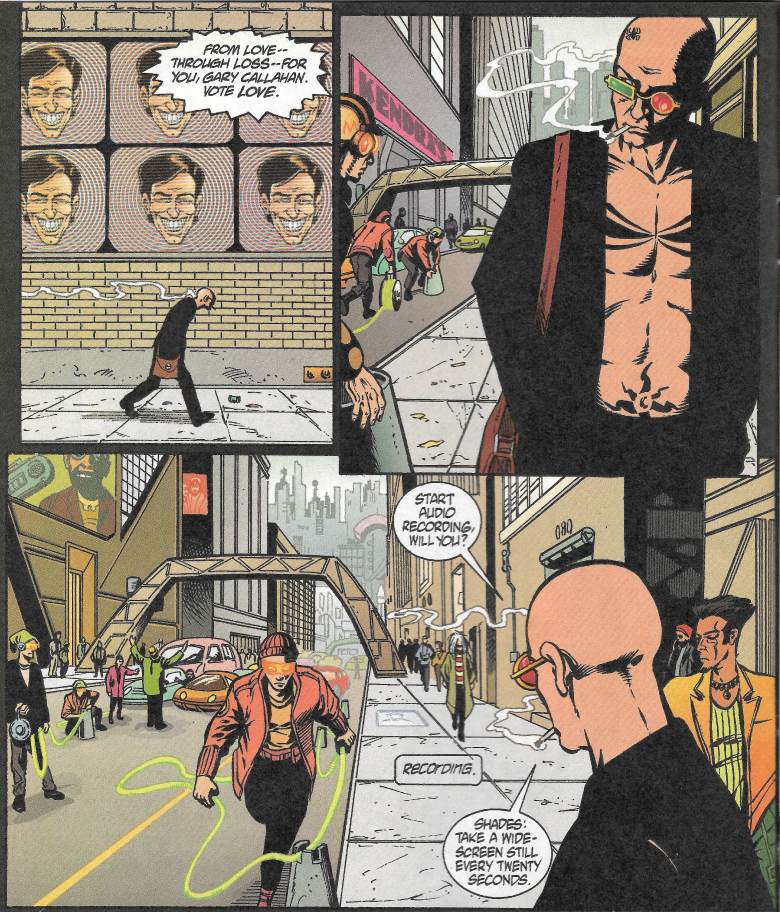 …something about those young men setting up that odd green glowing cordoned-off area. Suddenly, Spider has it! In a flurry of pornographic remembrances, he realizes they are about to activate an Information Bomb… 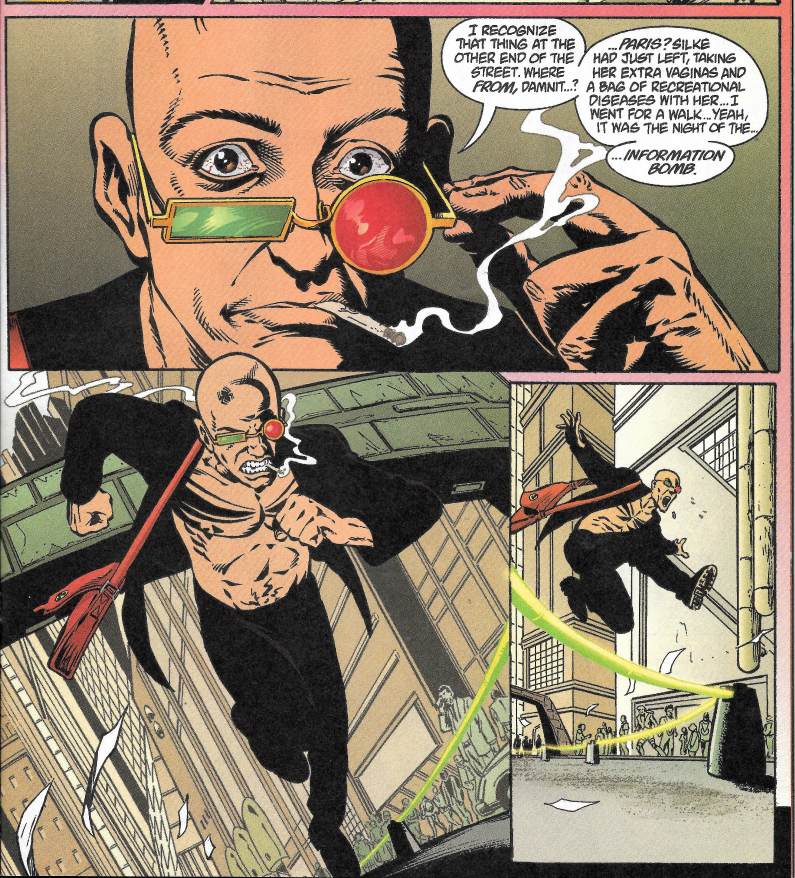 …which is more dramatic than it sounds, as the “explosion” creates a Technology-Free Zone that takes out people’s personal, wearable technology, cell phones, storage devices and credit cards. The activists behind this little stunt step up to claim their due and I can’t help but feel that the book is saying they share some of the energy and goals as Spider does – only their outlook is hopeful whereas his is not. 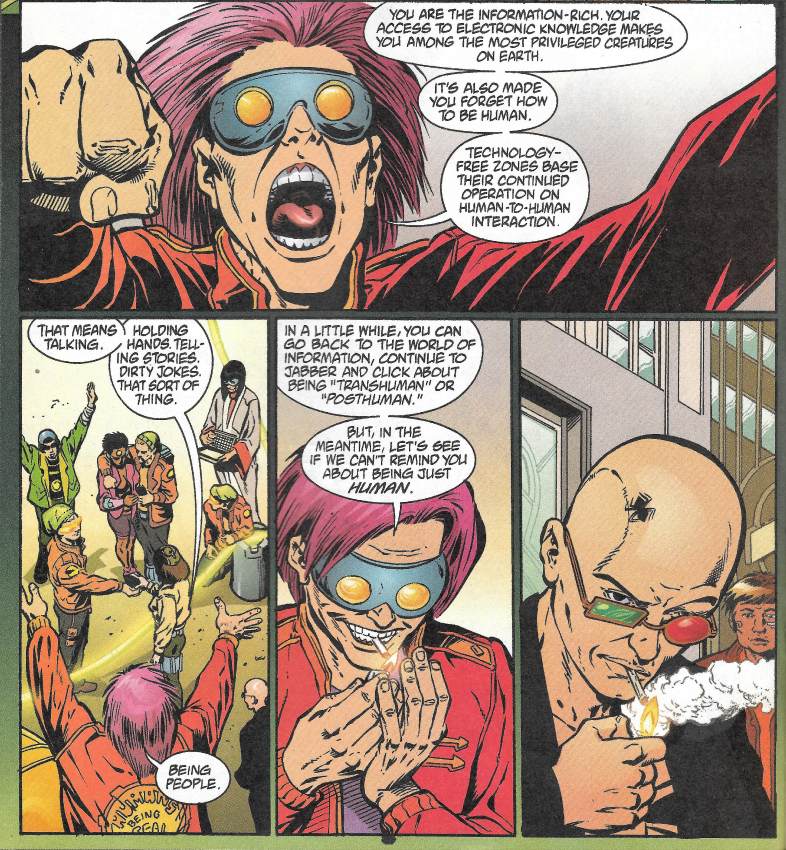 We get the second of the book’s pictures of “the new scum,” these being refugee children who are immigrating to Norway (possibly because the USA won’t take them in). These pictures are not meant to represent true “scum,” that is just Spider’s ironic nomenclature for them. He seeks to create for his audience ( the ones he is writing the articles for in the book’s world) the clear understanding that this is how the government views us. We are below or beneath it, only fun as a diversion or something that can be ground under it’s heel. There are hard-hitting lessons this book teaches that feel authentic. Not sure if Ellis lifted these from Thompson’s works or if they are his own inventions, but they resonate so well at this present time. 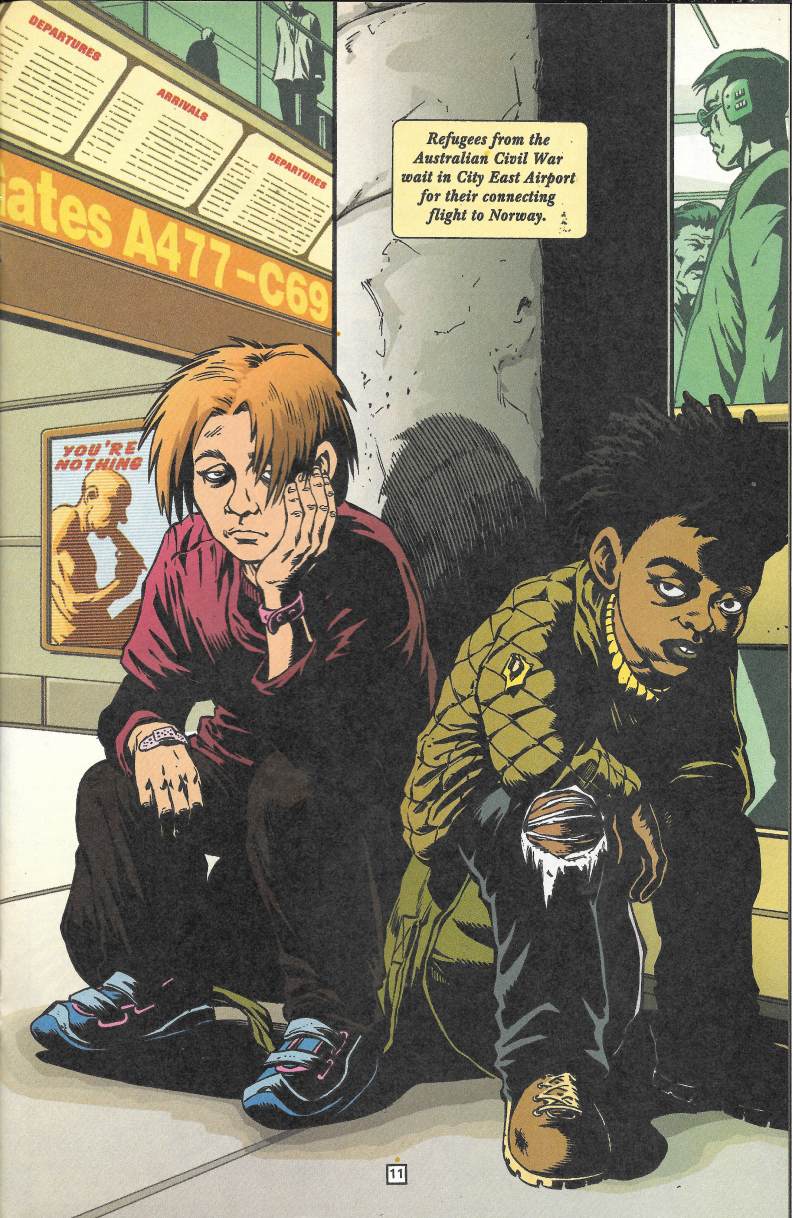 Who are the undesirables in the world we live in? Why? What makes a human “valuable?” Is it income earning potential or… something else. Something incalculable in money, but is rooted in the soul of each of us. I believe Ellis is saying that. That we all are unique and special. That we matter as individuals.

And Spider knows it too, but he lives in a world convinced otherwise and that maddening fact drives him to fight against the system every way he can. 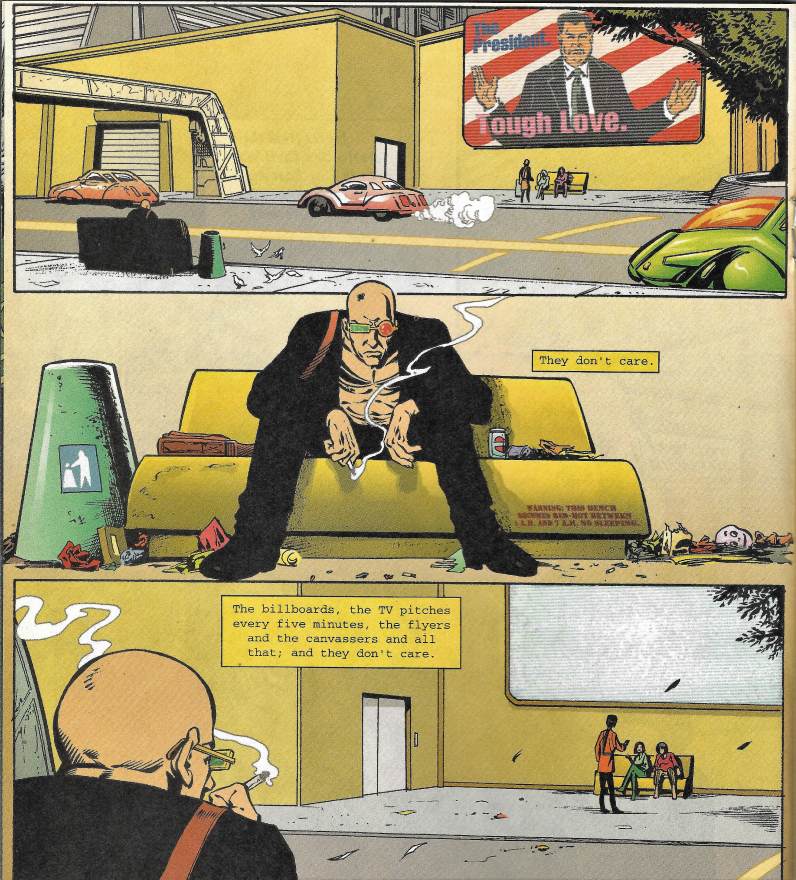 A system that everyone seems determined to forget. No one is interested in the election that might decide their very fate. They are ignorant to the danger Callahan represents. Only Spider sees it. 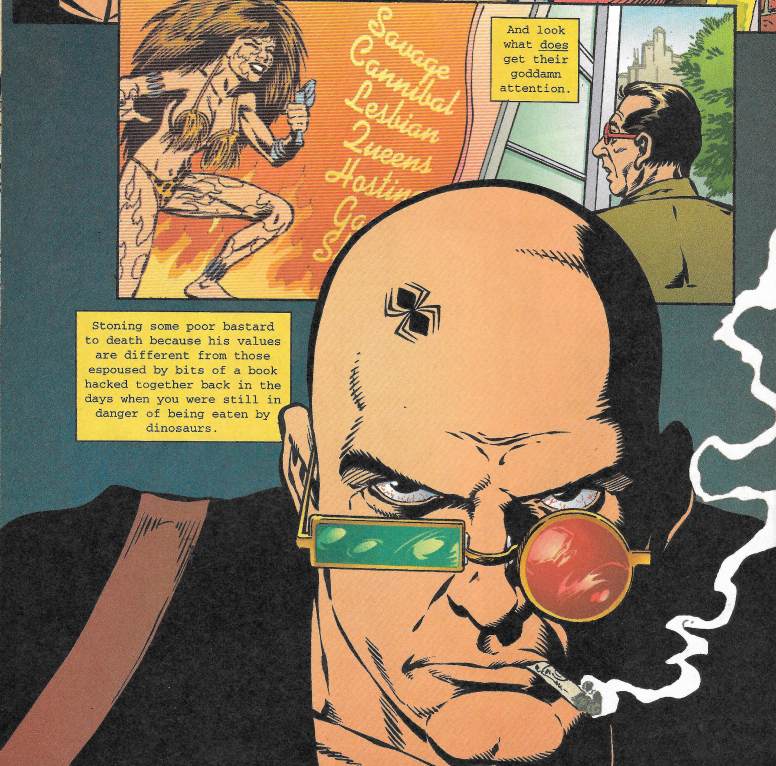 This is one of the books big turning points, where Spider sets his course in firm opposition of Callahan. Spider seeks to undermine his candidacy and cause him to lose the election. His frustration at the general populace making him even more resolute. 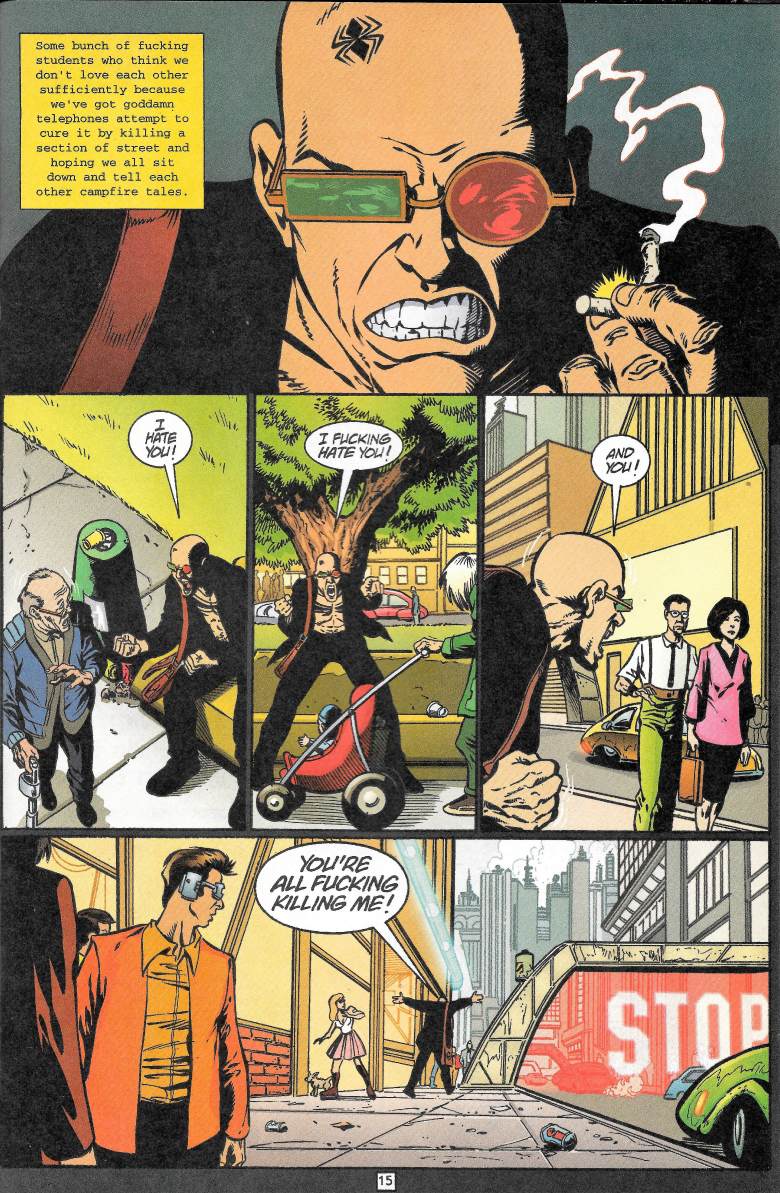 Time for another slice of life one-pager, only this time aimed at the negative effects consumerism has on people. This doesn’t make us look worth saving, but the message behind it is very clear: we can be easily lead to anything…even eating other people…if the argument is made for doing so. If Spider decides to take on The Smiler all he need do is sell the self-absorbed populace on a line and they will bite with the same gusto as these two kids are on those French people’s legs. 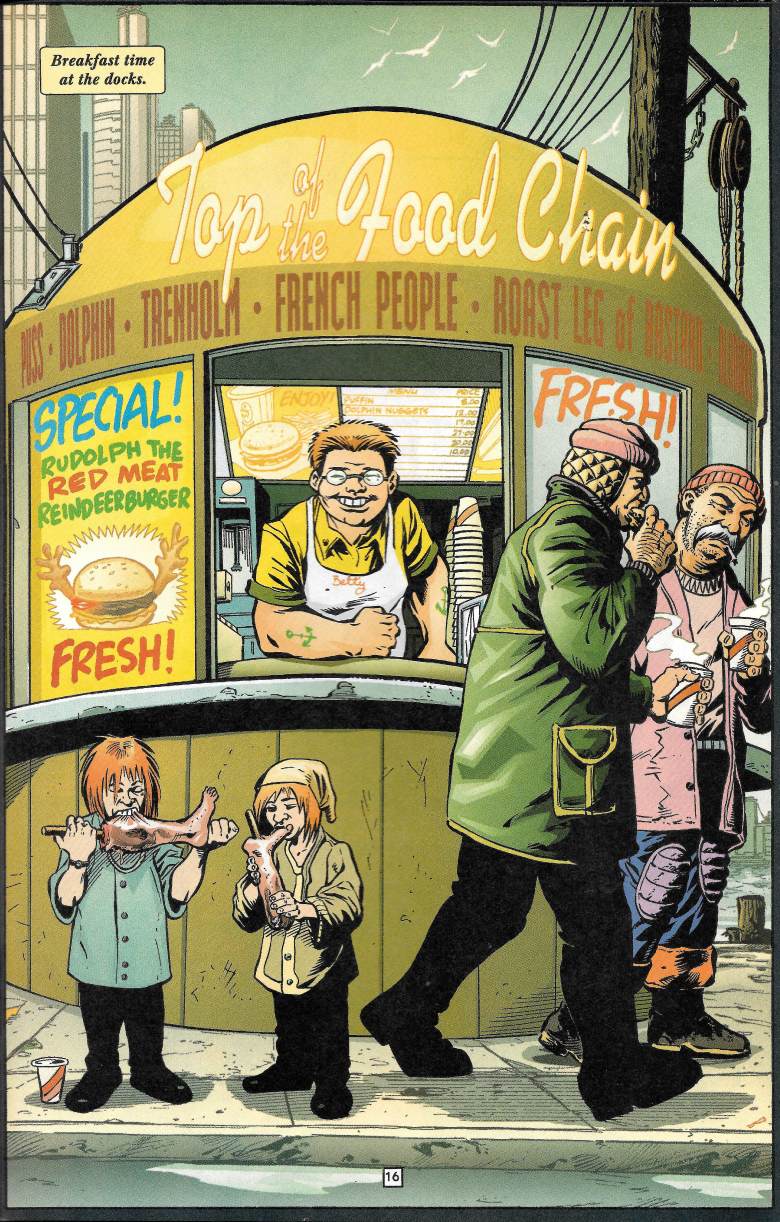 Back at Spider’s apartment, his two assistants are watching television and discussing the topic of the moment, which happens to be that Yelena slept with Spider. It becomes Channon’s favorite topic. 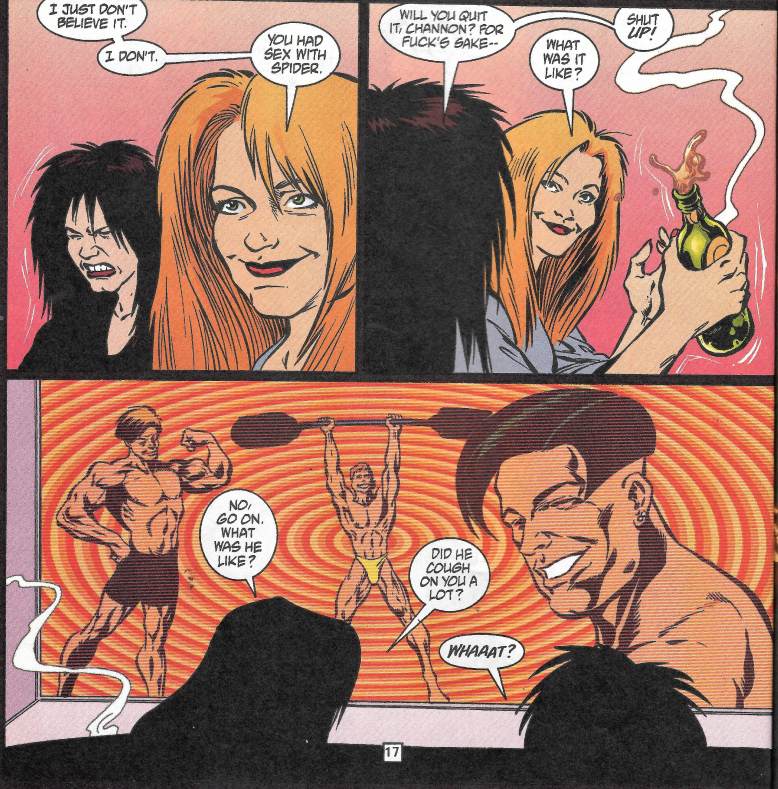 In fact, Channon is nursing an unhealthy need for details of their intimacy. 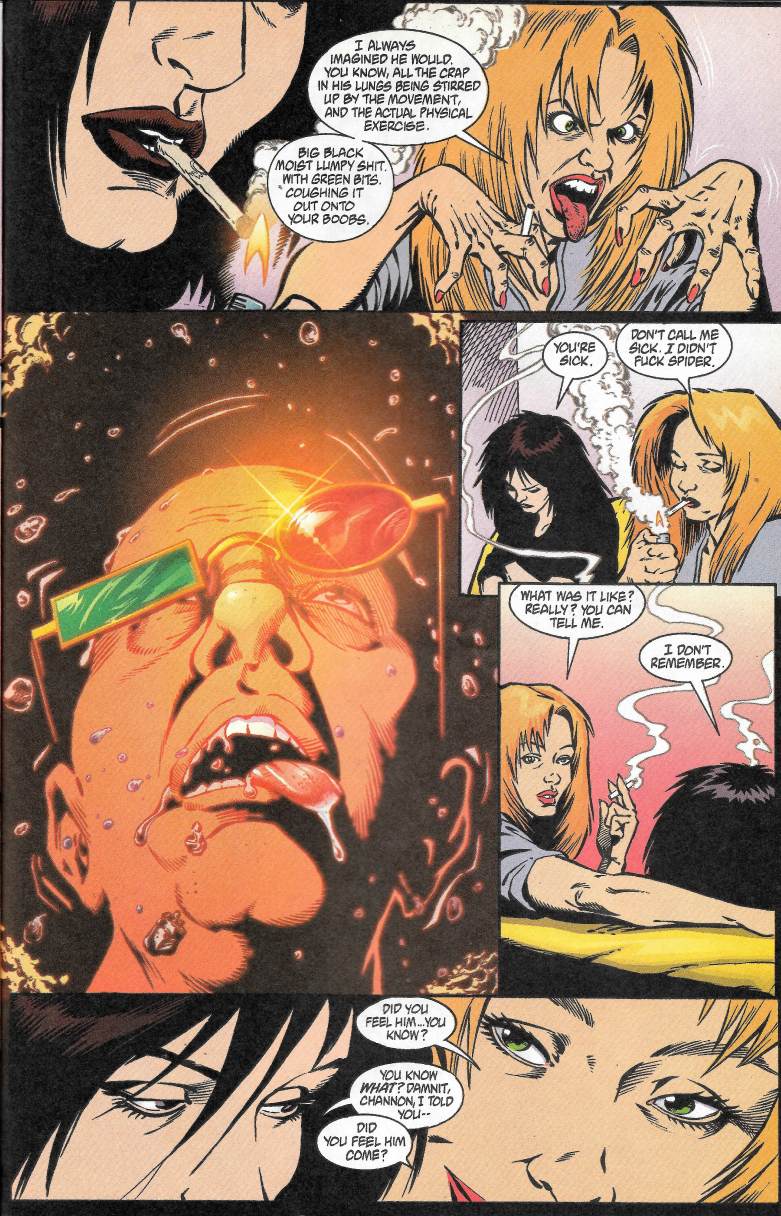 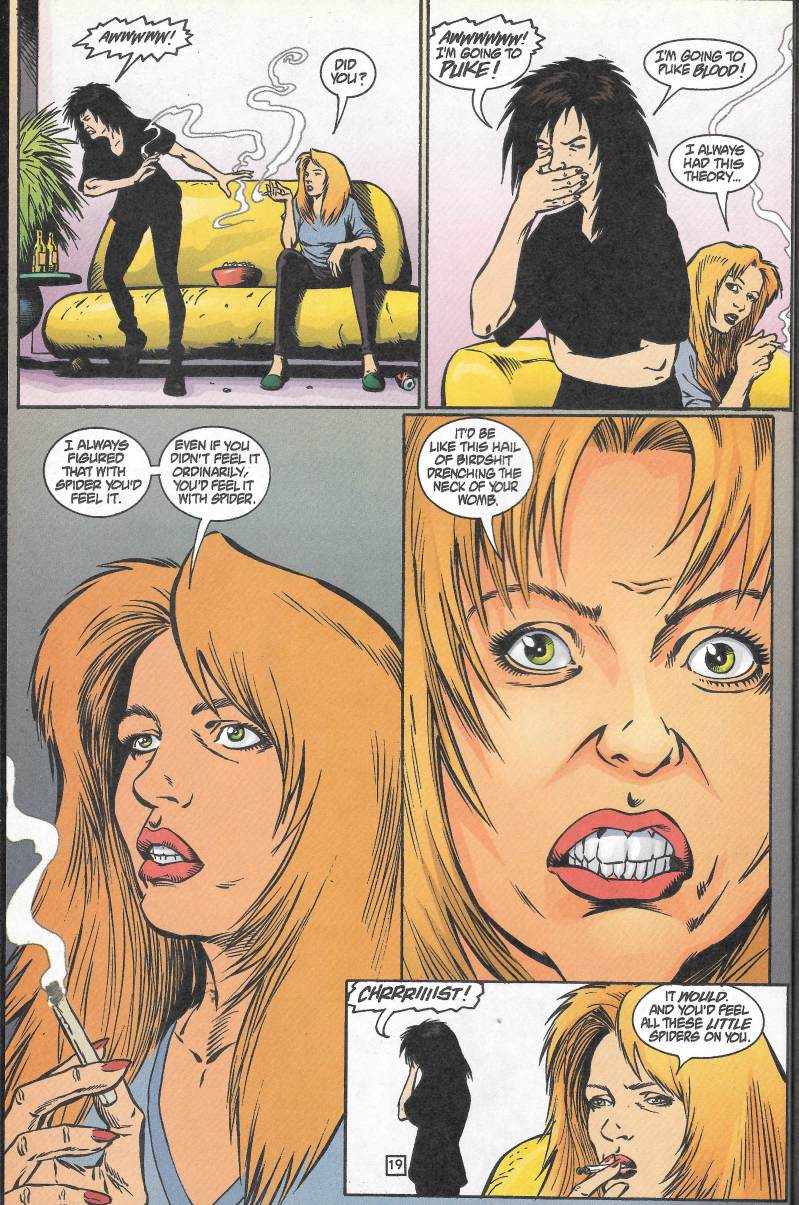 …and as Yelena points out, possible driven by a desire to sleep with Spider herself. Channon looks to be in a state of denial about harboring any such aims. 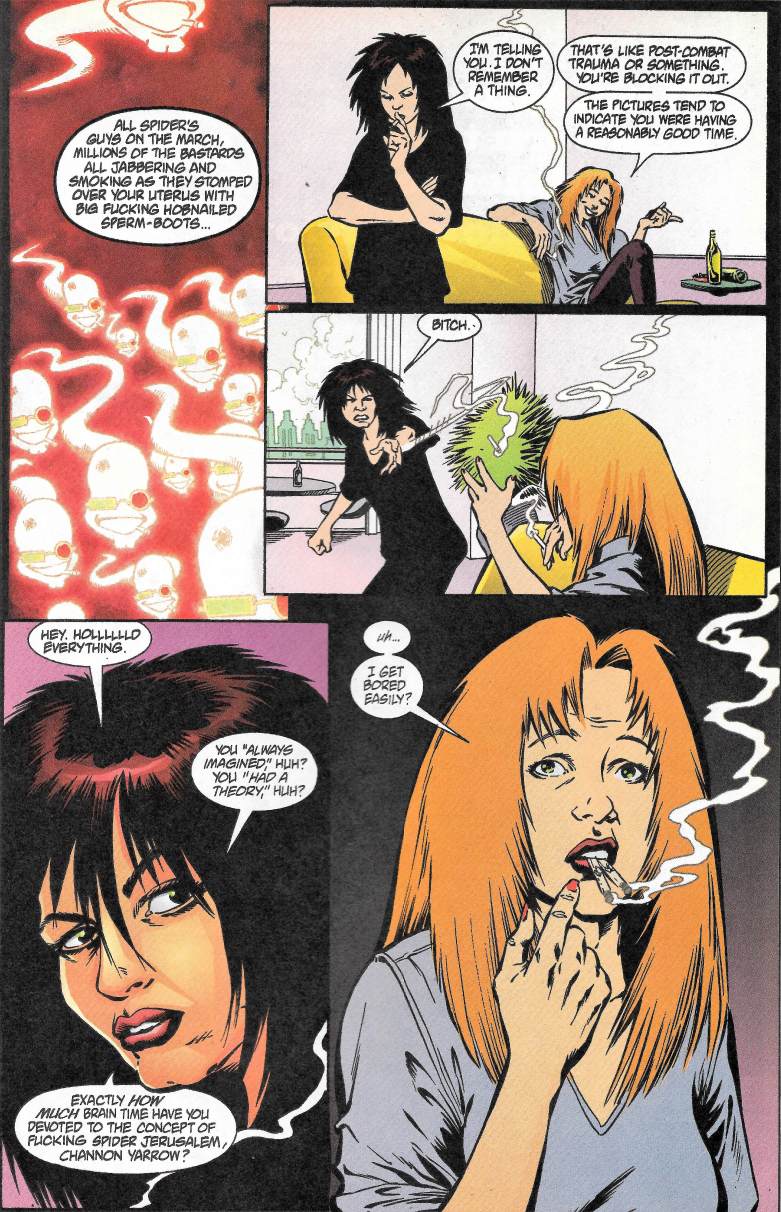 Of course, this is just background noise to the big news they have when Spider finally gets back to the apartment. 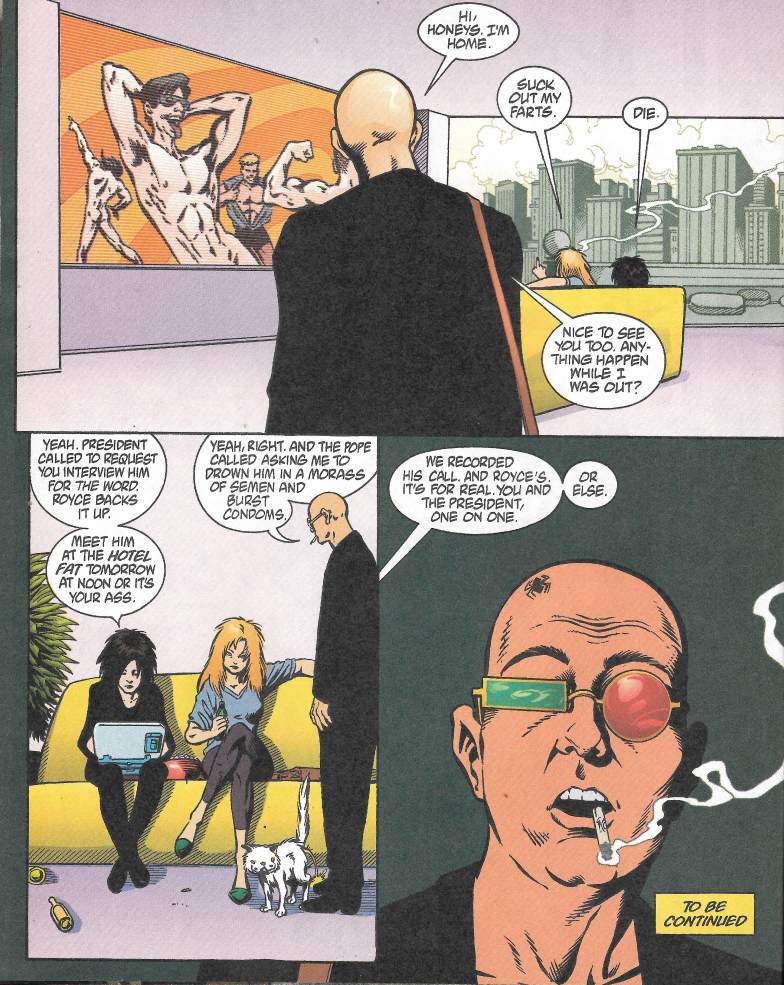 That’s right, Spider one-on-one with The Smiler. If ever there was a chance to take him out of the race, it’s now.

This entire series is gripping and full of the things so missing in today’s politics. We need more straight shooters like Hunter S. Thompson and Spider Jerusalem to call out the current administration Washington from their backward, twisted up, counter-culture point of view. And I don’t just mean Trump or the Republican side. I mean both sides. All sides. Our government is full of people who vote down things we the people want so they can serve their special interests instead.

Brilliant guys like Spider, while not being someone you’d care to live with for any period of time are the exact element so necessary to a growing society. Like Socrates, they bring wisdom from an uncommon viewpoint and they make us uncomfortable with their insight. I think that’s exact what we need more of these days.
Posted by SonOfCthulhu at 2:00 AM