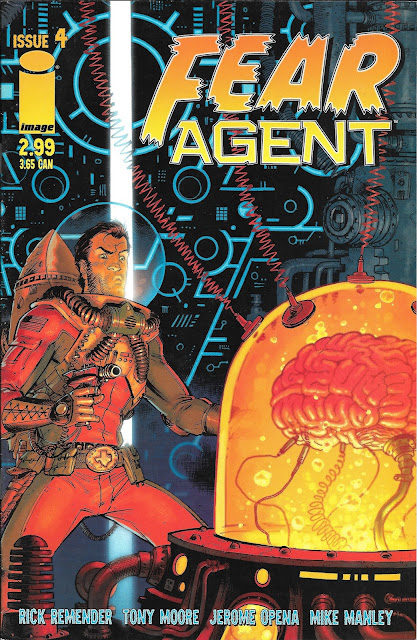 It’s a bizarre Buck Rogers or a freaky Flash Gordon

Fear Agent, the brainchild of Rick Remender, comes off like a throwback to the action-adventure sci-fi books of a bygone era. Remender is noted for stating in the first issue that he felt “science fiction has lost its stones”, with the assumption being that Fear Agent was his attempt at helping the genre find them again.

The book series follows the rugged damaged Texas spaceman Heathrow Huston adventures as the last Fear Agent, a task force dedicated to eradicating alien threats to Earth. Heath is emblematic of the Buck Rogers/Flash Gordon type character that is the one man who can make a difference in the intergalactic fate of humanity. On the other hand, Remender writes Huston as an alcoholic who, if this one issue is indicative of the series, tends to get himself murdered a lot.

Still, it’s a bunch of fun and the story sucks you right in. Huston got this gig over guilt at not being able to save his son to alien maraders and separating from his wife in the aftermath. He’s a damaged guy who quotes Mark Twain (although referring to him not by his pen name) and takes on all comers to protect our planet.

Let’s get started, shall we?

First a bit of catch up from the wiki and what I glean from a fresh read-through: Huston and a fellow Earthling named Mara have crash landed on an alien world after a desperate chase. Their ship and it’s A.I. system named Annie sustained damage severe enough for them to be unable to leave. Now they have encountered a primitive race that inhabits this world that look a bit like the frost giants from Thor.

Oh, and the end of last issue the leader harpooned Huston through the chest with his spear. Huston quotes Clements saying ”Favored above Kings and Emperors is the stillborn child,” a clear indication that he wishes he were already dead. But these frost giants aren’t quite done with the pair yet. 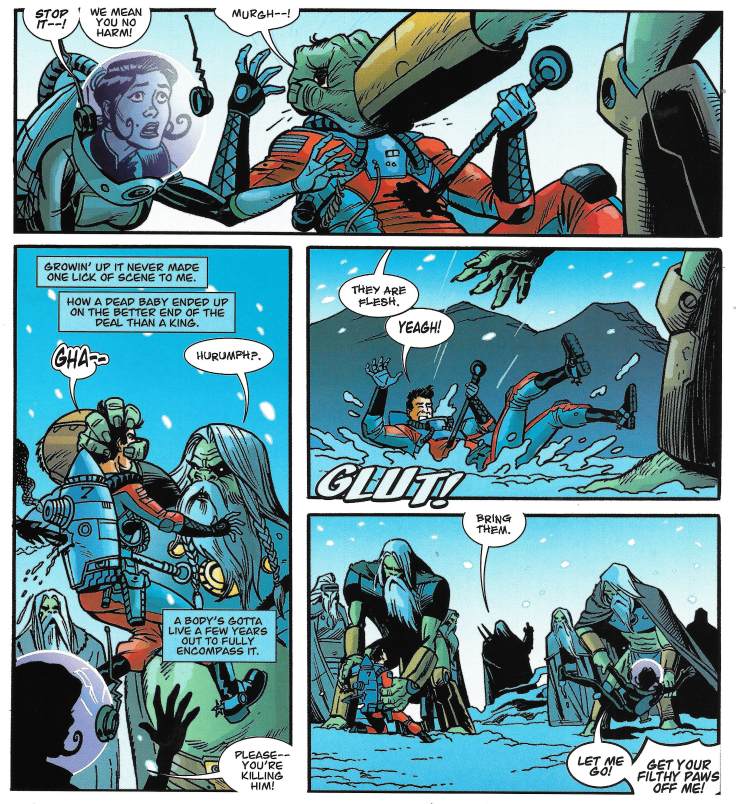 These Astorgians speak a language that our heroes can’t understand. They are confused by the fact that Huston and his companion are “just flesh”, believing his outfit marked him as one of their robot enemies on the planet (more on them in a bit). As such they capture both of them and take them back to their village, mainly because… 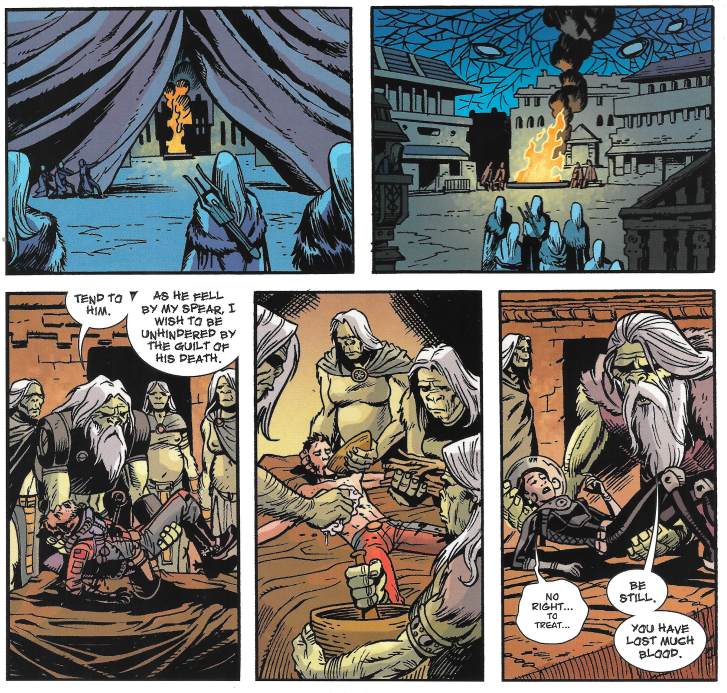 …their leader feels guilty for impaling him. After resting, Mara is the first to wake and using a universal translator, she strikes up a conversation with the leader of the Astorgians, a guy by the name of Gens. 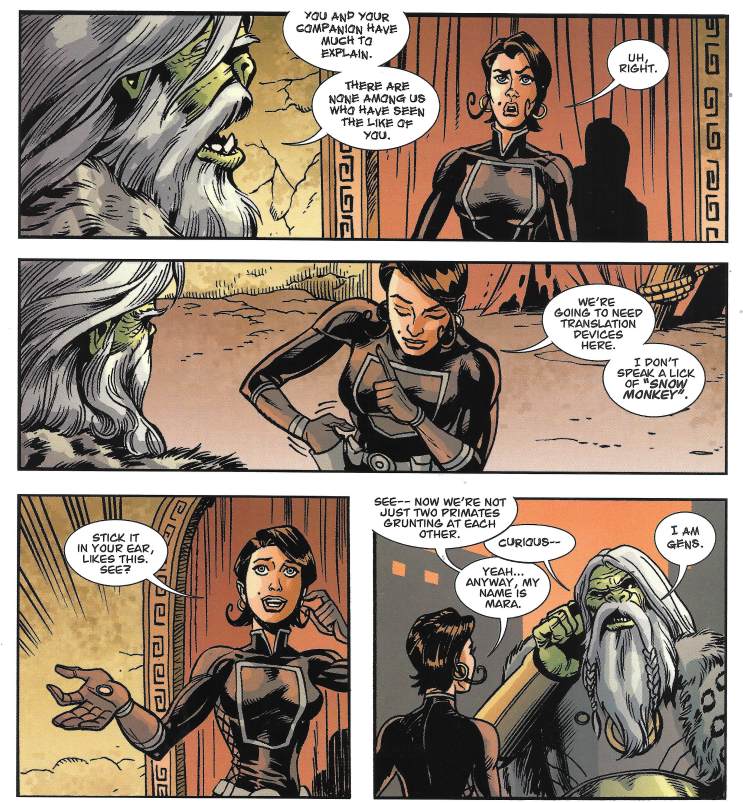 Soon enough they are joined by a freshly mended Huston, and talk begins of who the Astorgians thought the pair were, a robotoid race known as the Tetaldians. The Tetaldians were the ones responsible for the death of Huston’s son. Gens begins a tale of how they came about. 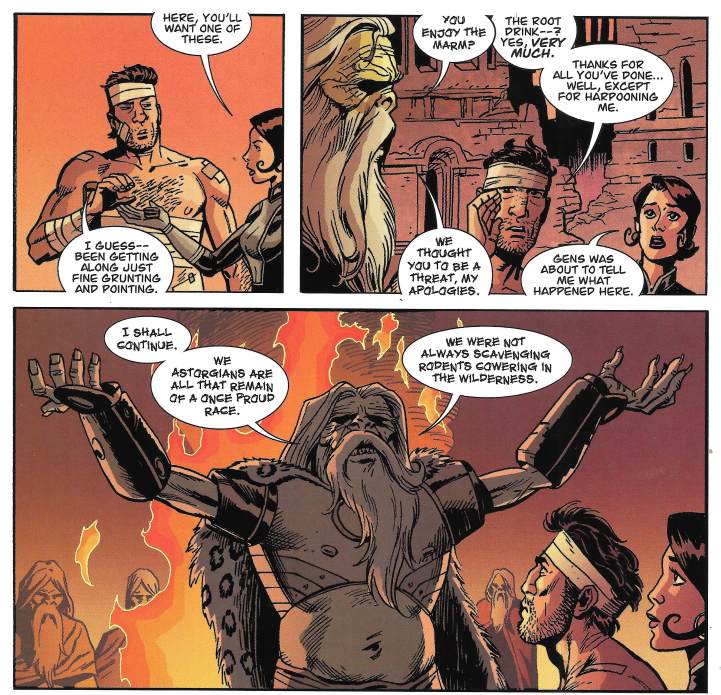 Their thriving civilization gave rise to the Tetaldians. Their leader Tetald’s consciousness was transferred via brain implant into a robot body making the first of the robot creatures. After many more elder statesmen were turned into the unliving cyber-dudes, the leaders of the Tetaldian complement found out there wasn’t enough raw material to transfer everyone to an eternal body. 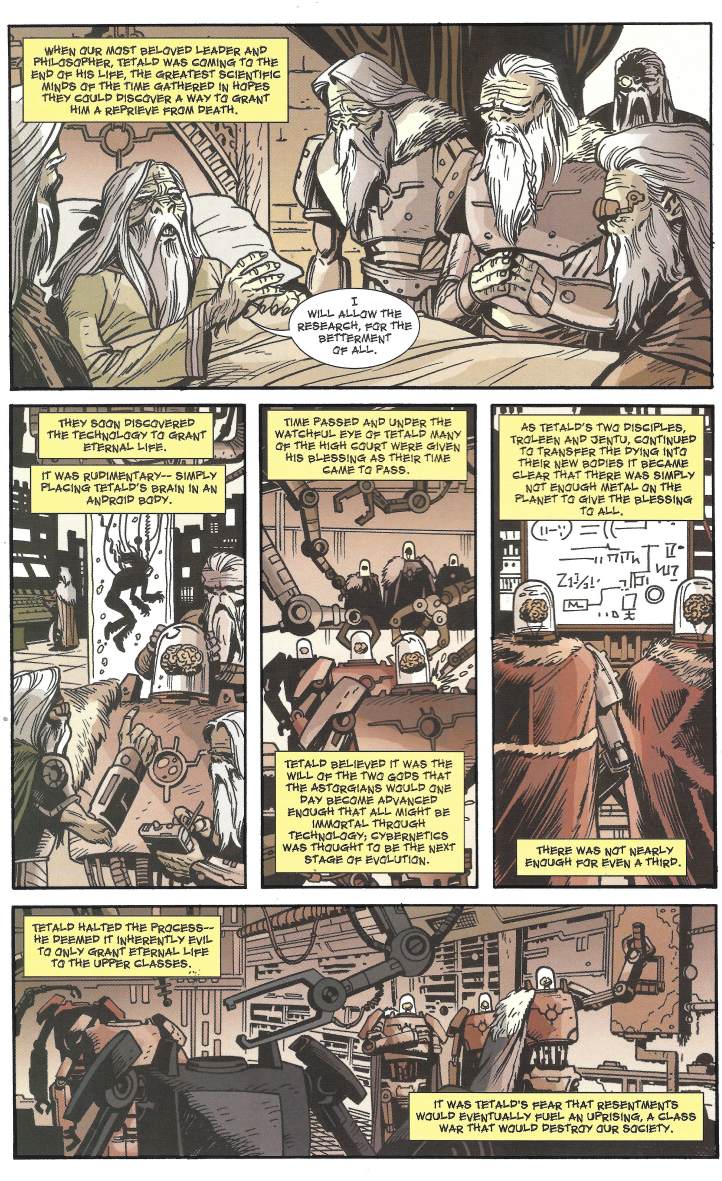 Thus an uprising took place. Jentu murdered the kindly Tetaldians and slew his rival Troleen. Jentu’s factions then started draining the lifeforce of captured Astrogians to power his army for centuries. 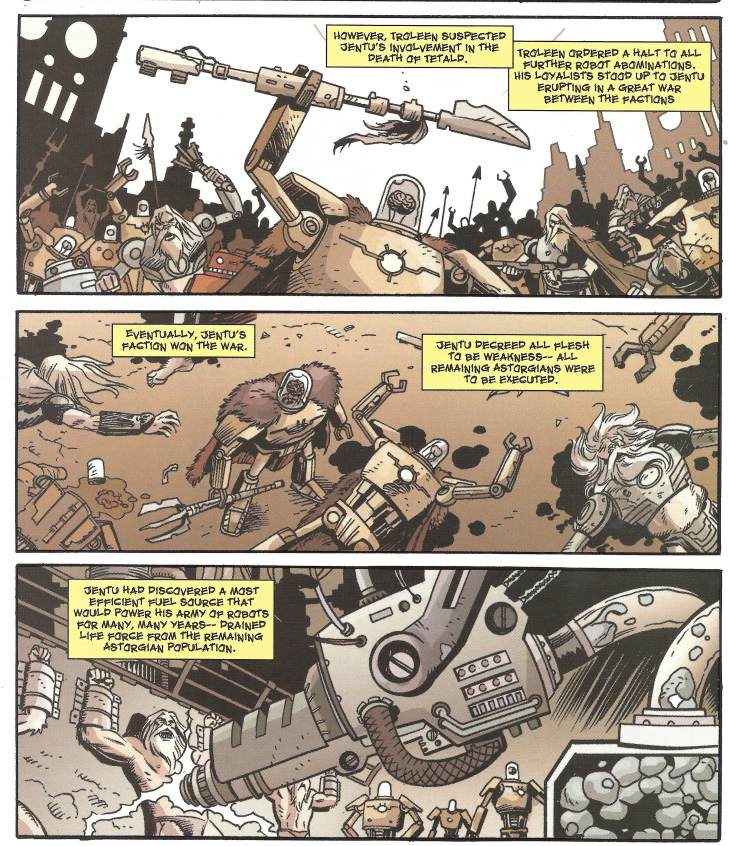 Then they turned their attention to spreading themselves across the universe, like some would-be Cybermen…but as of yet have been kept on the planet by the sabotaging of their facilities by the remaining Astrogians. 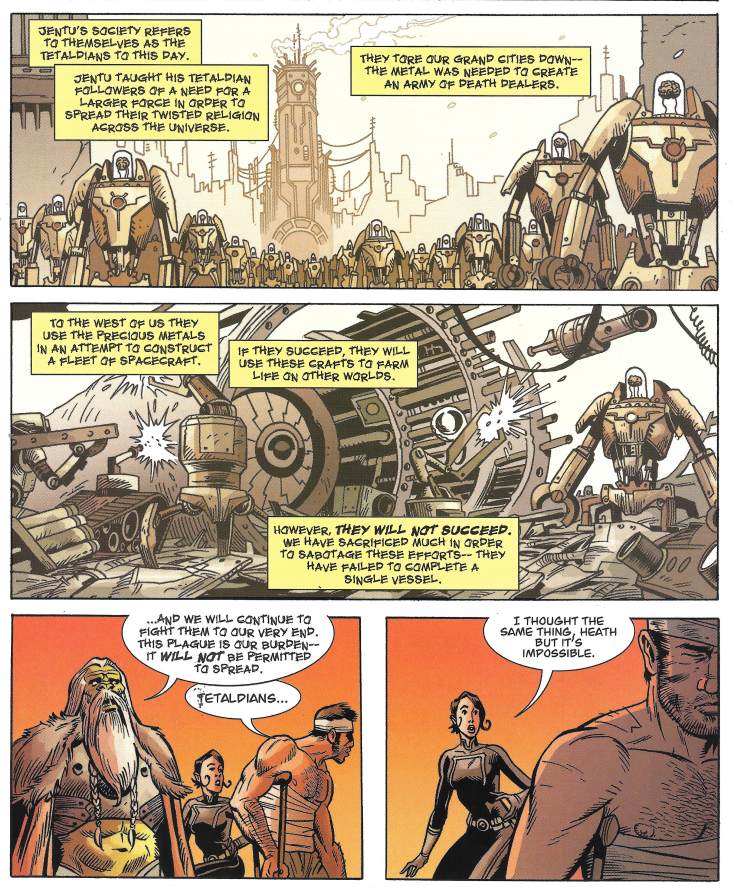 Huston gets a bit upset by all this history of his greatest nemesis and one part of Gens’ story sticks out: the Tetaldians haven’t spread beyond their home planet yet. 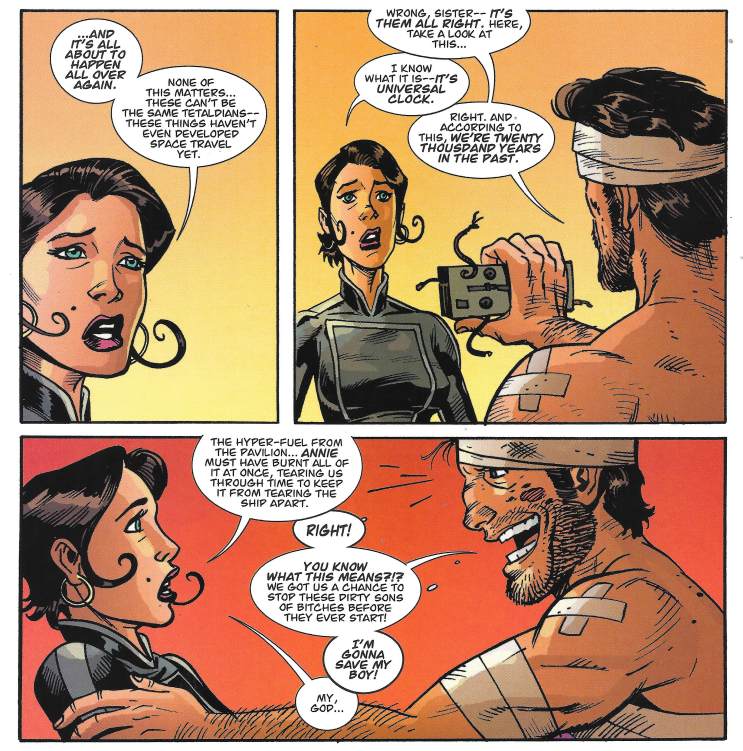 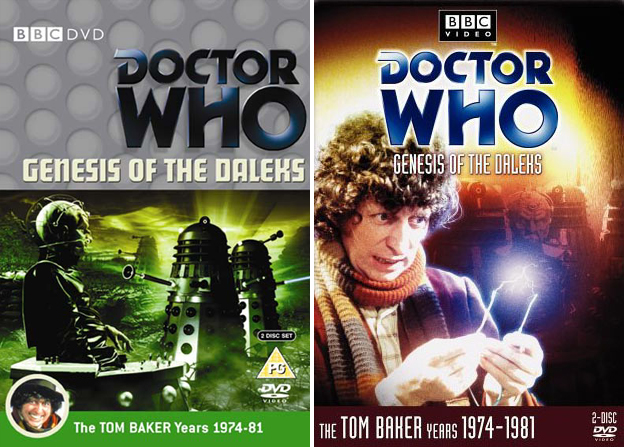 Well, okay. But the Doctor is one who NEVER kills on purpose and had a huge moral issue during the course of this arc. Huston is a different sort of hero. He’s got a plan to stop the Tetaldians, a weapon that will immobilize them with fast growing vegetation, and he immediately enlists Gens’ help in organizing a strike team to get it done. 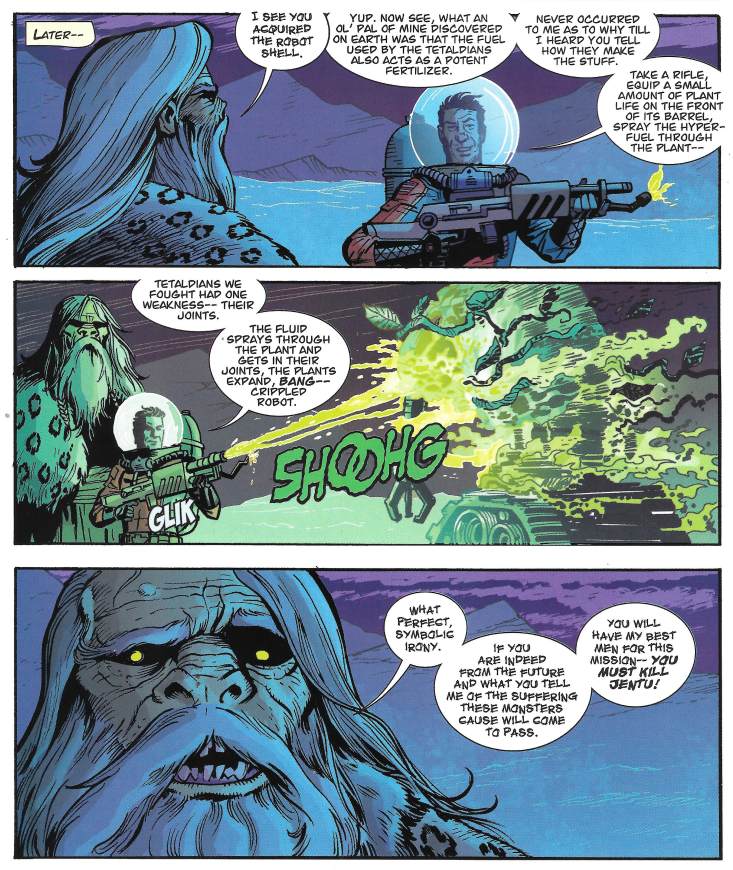 Jentu is as good as dead.

After a tough goodbye (forever) to his friend Mara… 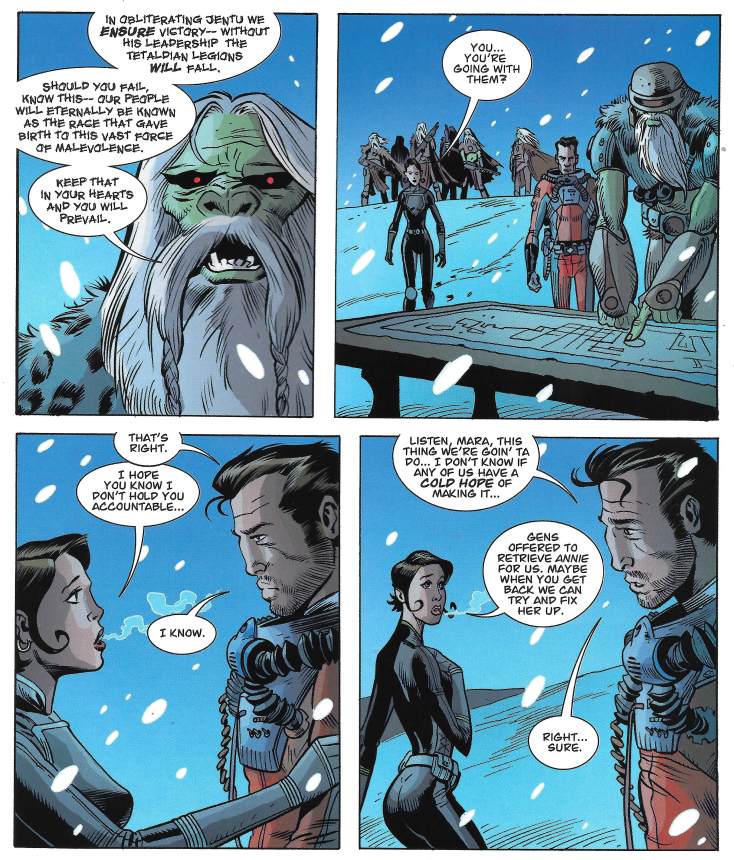 … the group sneaks into the tunnels under the Tetaldian’s city. They are met by walls lined with corpses of dead robots. 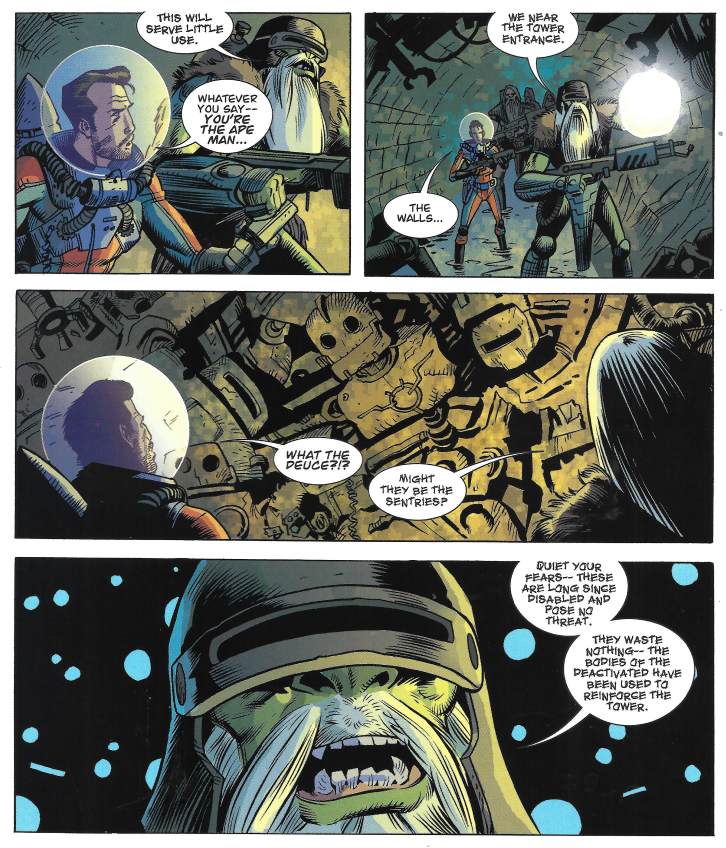 Which turn out to be not quite so dead after all. 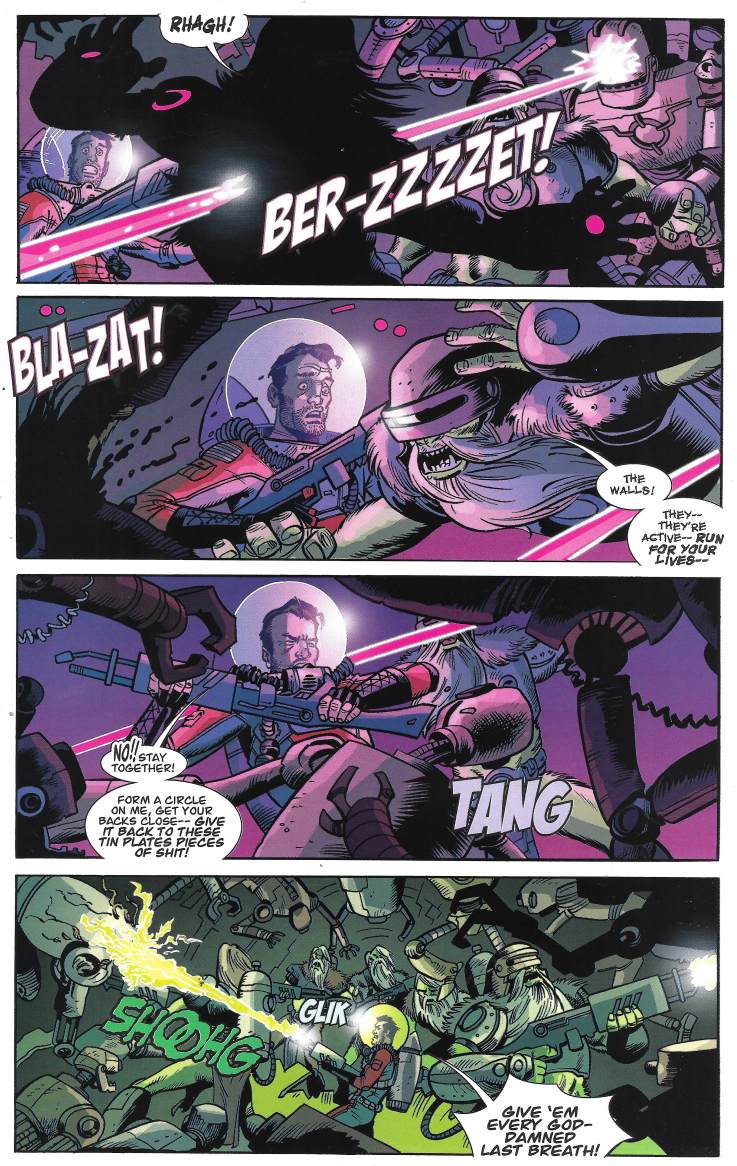 It’s here that we get Huston as the Ash of the evil aliens universe, kicking butt and not caring about the names involved. 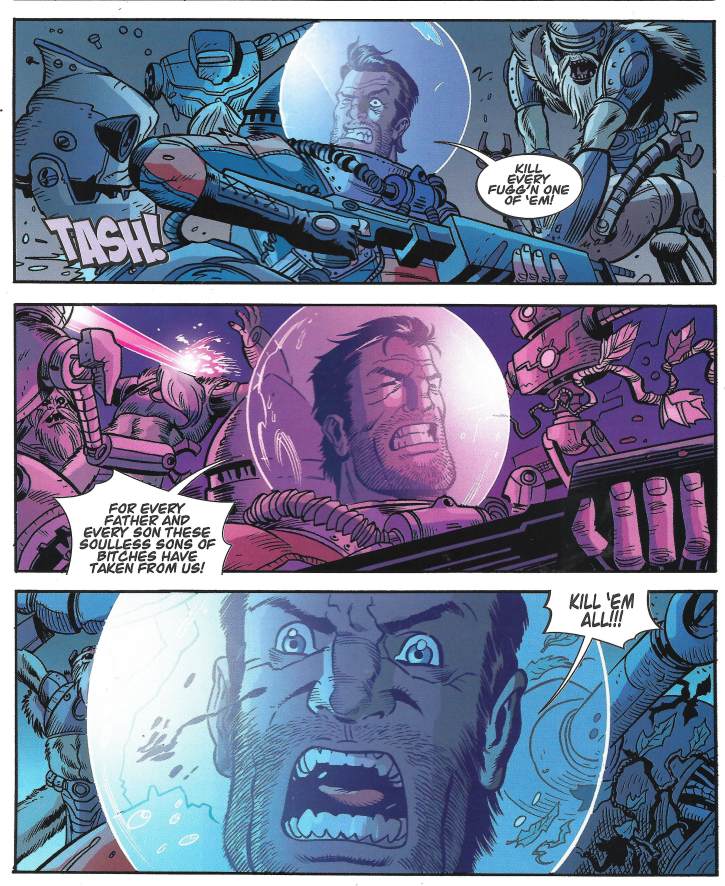 In the end, at Gens’ urgings, Huston abandons everyone to take on Jentu man-to-robot. As Huston blasts his way up to Jentu’s stronghold, Gens gives him one final yell of encouragement… 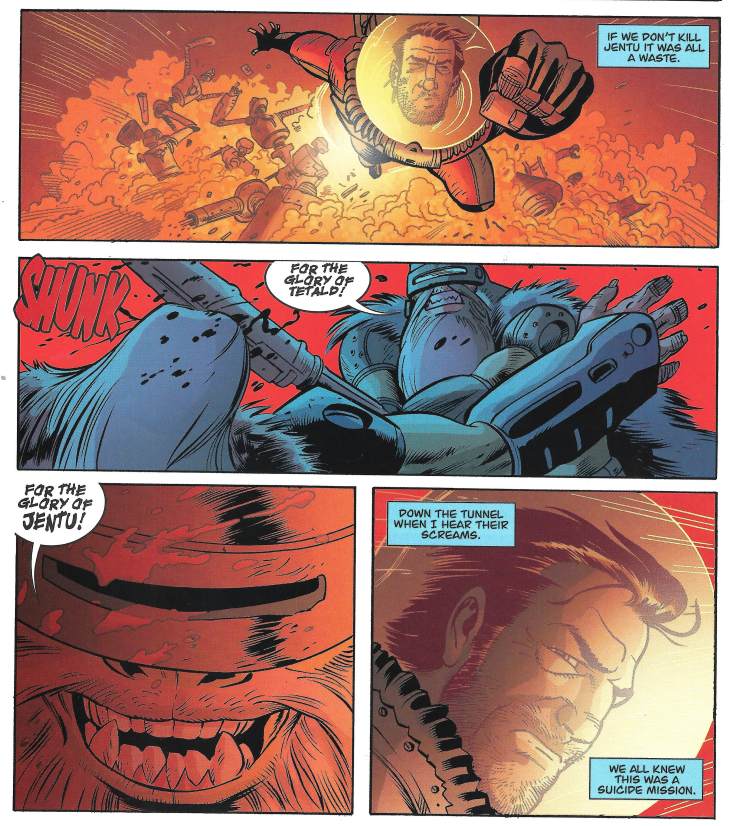 …and one that sounds a bit…traitorous? Huston must not hear that last part, because he lands ready to take on Jentu without any hesitation. Jentu seems little concerned with the danger this alien represents. 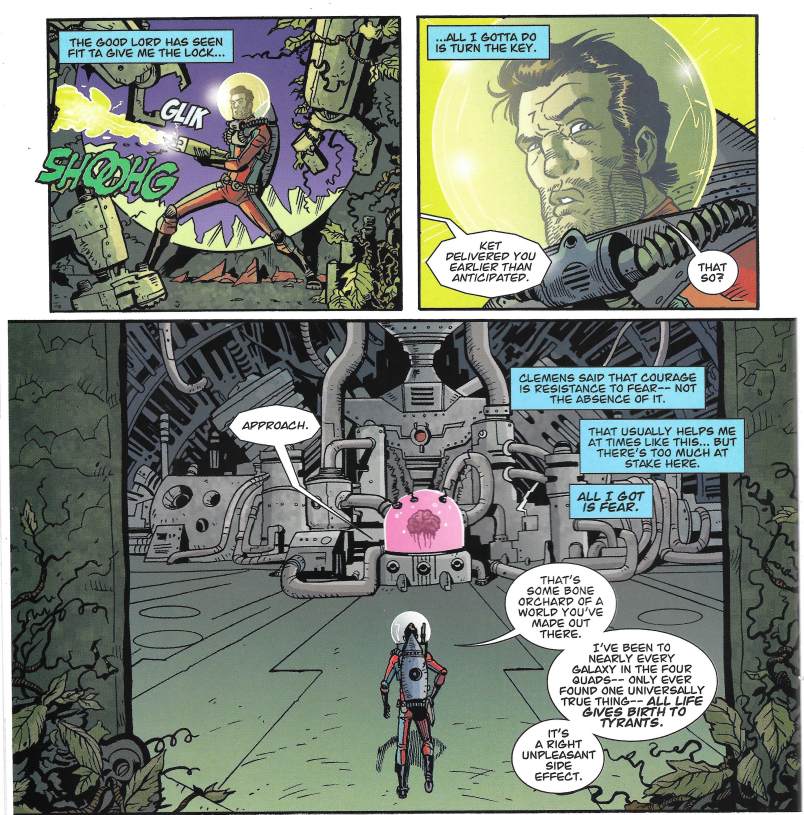 Huston executes him on the spot.

Or so he thinks, but Jentu is a crafty little brain and he scoots out an escape pipe into the body of a giant Tetldian robot. No, I did not know brains could move on their own either. 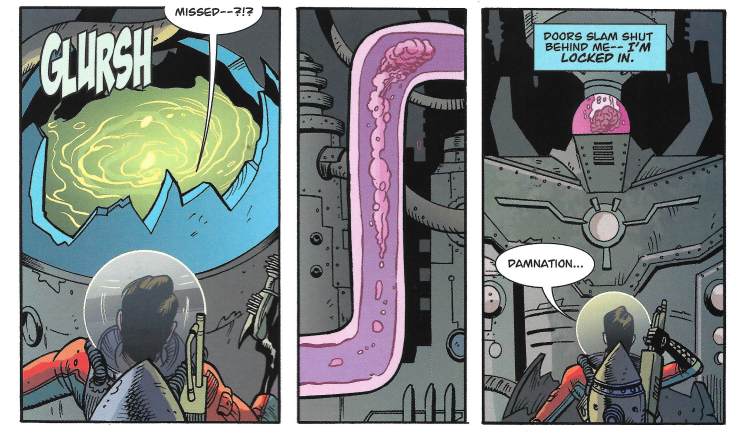 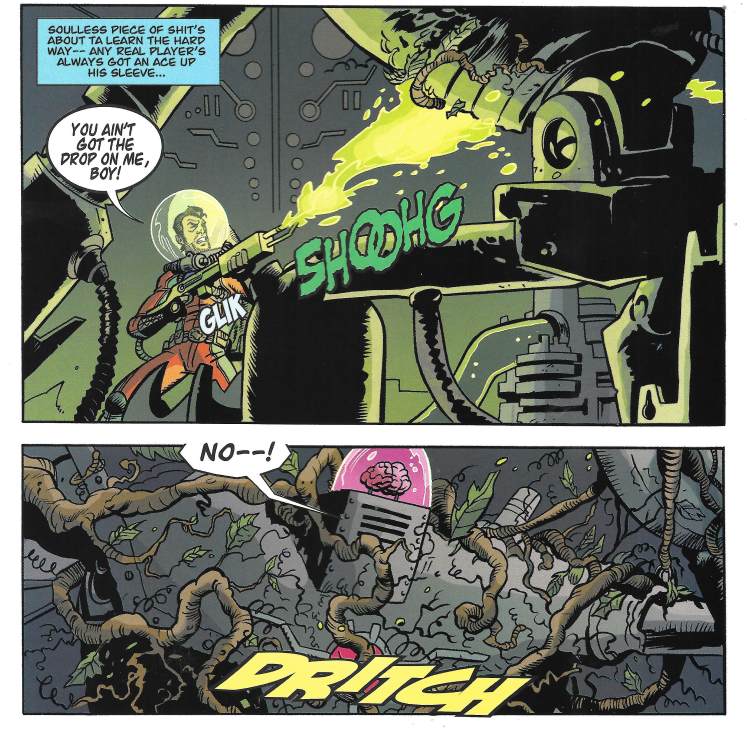 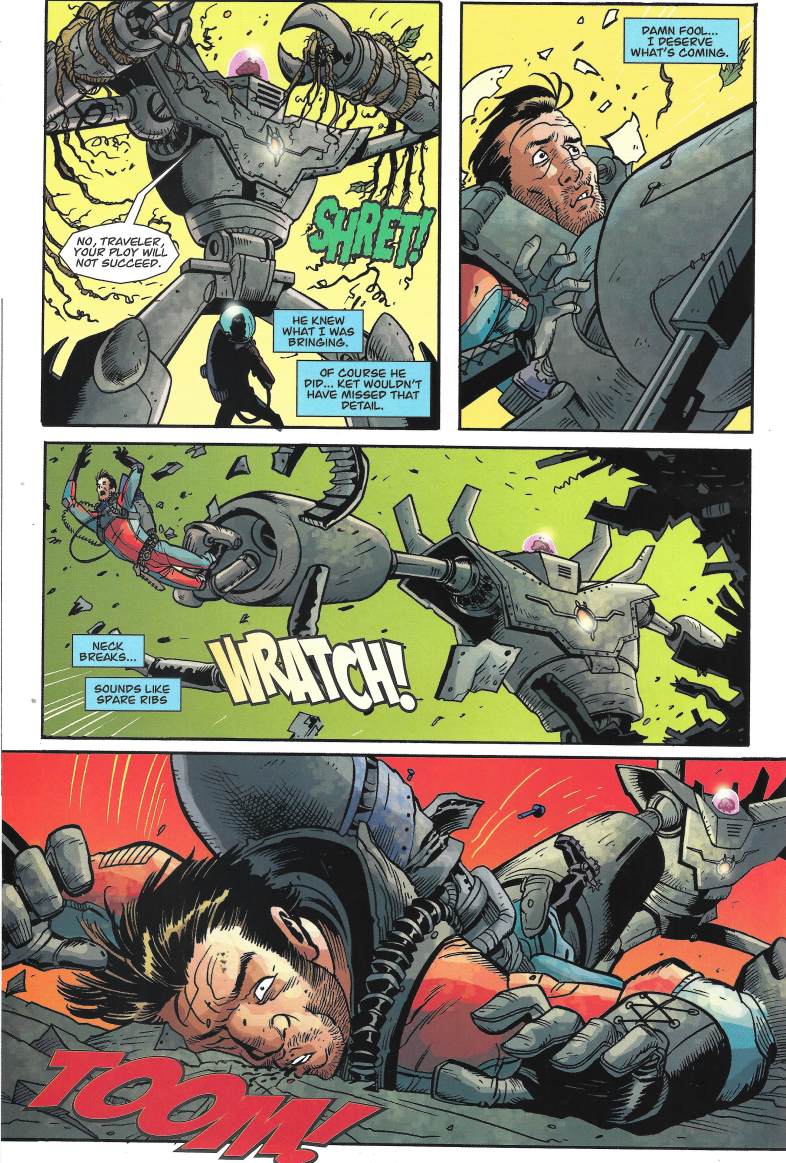 Appears Ket (whomever that was) was playing both sides and warned Jentu of the Earthman’s secret weapon. Now the Tetldians have a defense against even that, which means their invasion will be even more successful. This fight doesn’t go well for Hutson. Hutson begins to berate himself for having been so foolish. 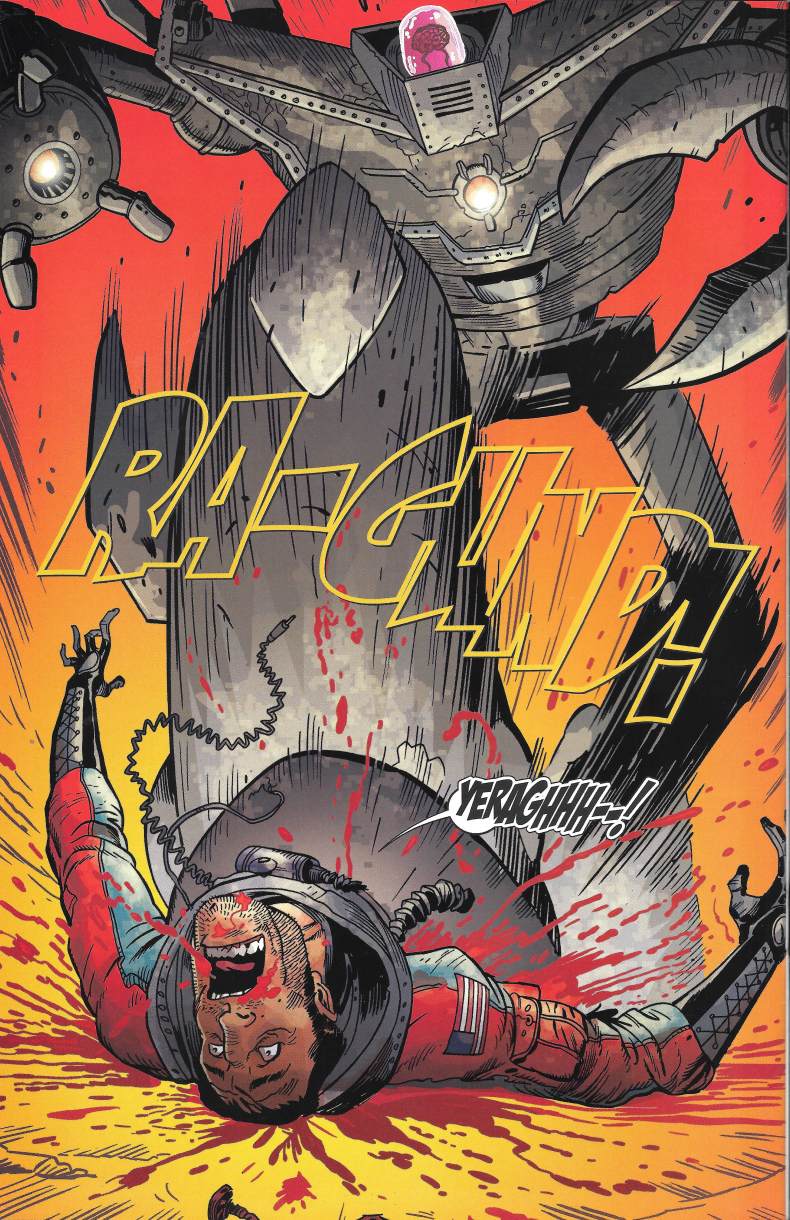 Thankfully, that doesn’t last too long.

Uh…guys? It’s like issue number 4 of this series. Killing your hero now does NOT seem like the way to make it into the double digits.

And yet it was.

Fear Agent has lots of twists and turns to the story, most of which I’ve yet to discover first-hand. The parts posted to Wiki I’m skeptical of, since they don’t cover the plot twists in this issue correctly. What I am certain of is that I liked the story and the character of Hutson. I’d be willing to read more of them if the fall into the Crapbox. Everybody needs a little ballsy sci-fi action once in a while.
Posted by SonOfCthulhu at 3:21 AM