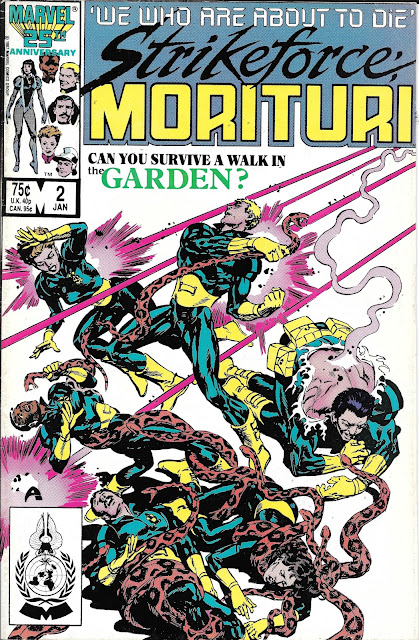 An alien invasion tale more to my liking

Peter B. Gillis and Brent Anderson came up with a winner concept for Marvel in 1986. The idea was to produce a non-616 universe book about a future where humanity was losing a battle against a savage but technological superior enemy from space. These creatures were known as the Horde and they proved to be unstoppable invaders.

In desperation, the world turned to Dr. Kimmo Tuolema’s “Morituri Process”, which granted the subject enhanced physical abilities and unlocked the potential for superpowers if exposed to the right stresses. It also killed you in less than a year. There were some other limitations, like only 5% of the population were actually able to use the process and people over 21 tended to burn out in a matter of weeks, but you get the gist of it there.

Thus was Strikeforce: Morituri created to fight off the hit-and-run tactics of the savage aliens. Morituri being taken from the phrase Ave Imperator, morituri te salutant or Hail Caesar, we who are about to die salute you. The book’s tagline is quite literal.

And strangely enough for the length of its 31 issue run it remained true to those concepts. We started with the first generation of Strikeforce: Morituri volunteers and by the time the series ended, we had blown through eight generations of super-powered soldiers against the Horde. There was not set roster and old heroes would die only to be supplanted by new one in a rotation that felt natural.

I didn’t collect Strikeforce Morituri when it came on stands, but several of my friends did and I remember their fandom for it to be quite intense. Something about the Horde’s despicable depiction might have done it. They truly were complete bastards. Everything from pulling kid’s heads off to nuking San Diego made them a foe worthy of the deepest enmity.

Either that or the more realistic nature of the conflict with actual causalities was the turn on. I’m not completely certain. What I am sure of is this one issue is intriguing even though it contains no actual conflict between our heroes and their foes.

We begin with our recruits watching a show that tears footage of actual battles to weave in and out of its story of heroism and sacrifice. They are all quite riveted by the scenes of carnage. 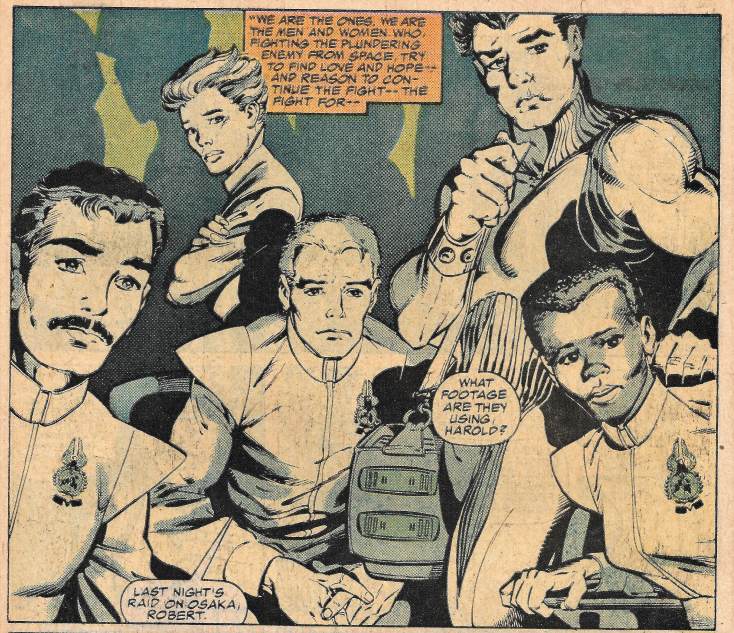 This first generation, with one exception, does not have its powers or codenames yet. They are awaiting training that will unlock them and their level of urgency understandable. 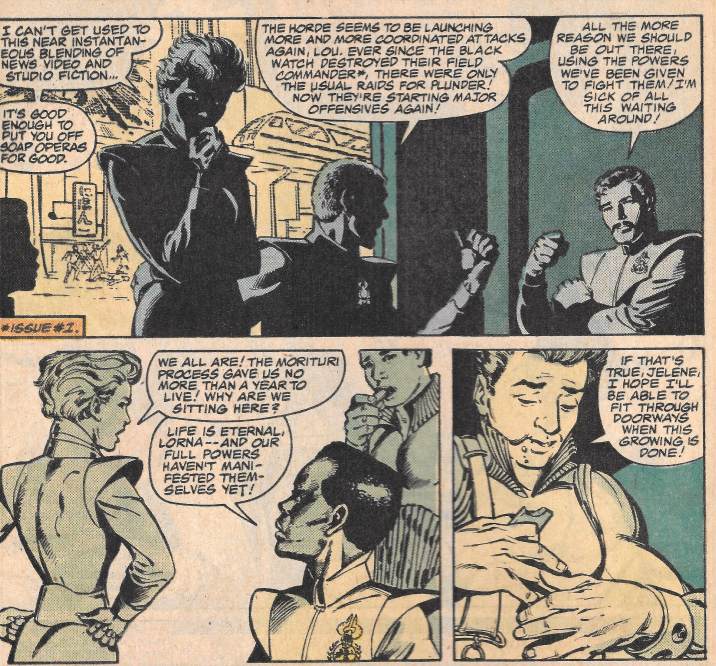 The only person yet to have powers is Aline. She shows up and models her new powers-specific uniform while they continue discussing the TV show. Suddenly a broadcast breaks in with a report on the Horde’s terrorist activities. 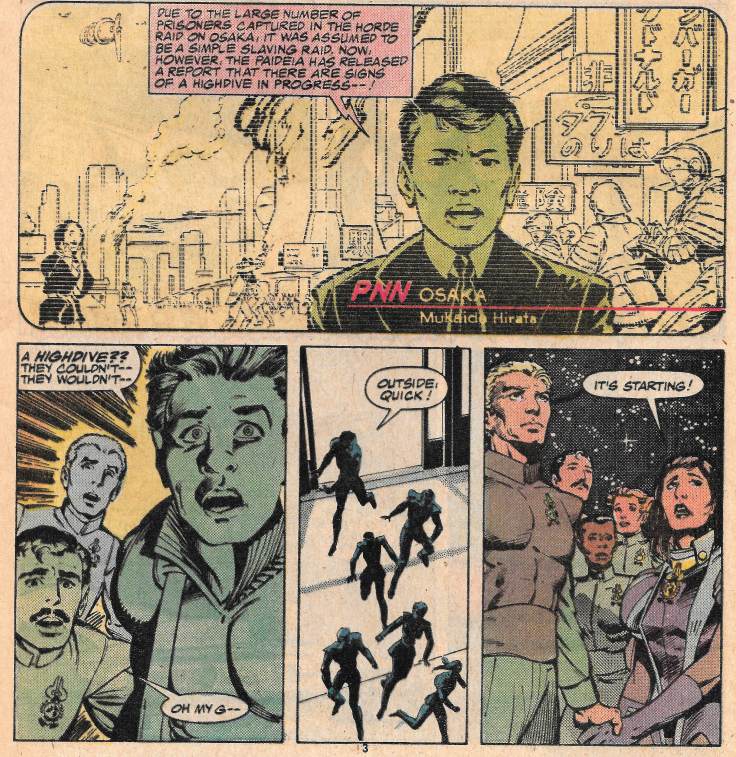 The highdive is a tactic where Horde soldiers would take prisoners with them back up into the upper atmosphere after a raid on city…and them push them out airlocks to fall to their deaths as fiery comets.

Yeah. They deserve to die quite a bit.

And Robert wants to give it to them. So much so that he starts powering up a space plane to go take them on, by himself, before the commander shuts down the ship remotely. And then shuts Robert down too. 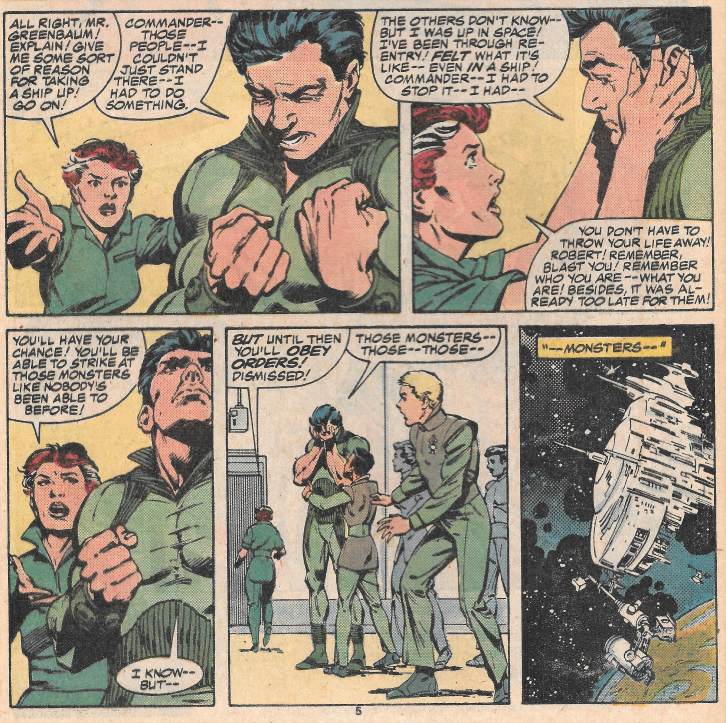 This is the book’s best colored page so far, and if I had to state a drawback it was colorist Scheele not doing a good job on those first few pages. They look lazily done, like someone used the same color for entire panels.

Back to the story, we get our only look at the “monsters” our band will eventually give their lives fighting. 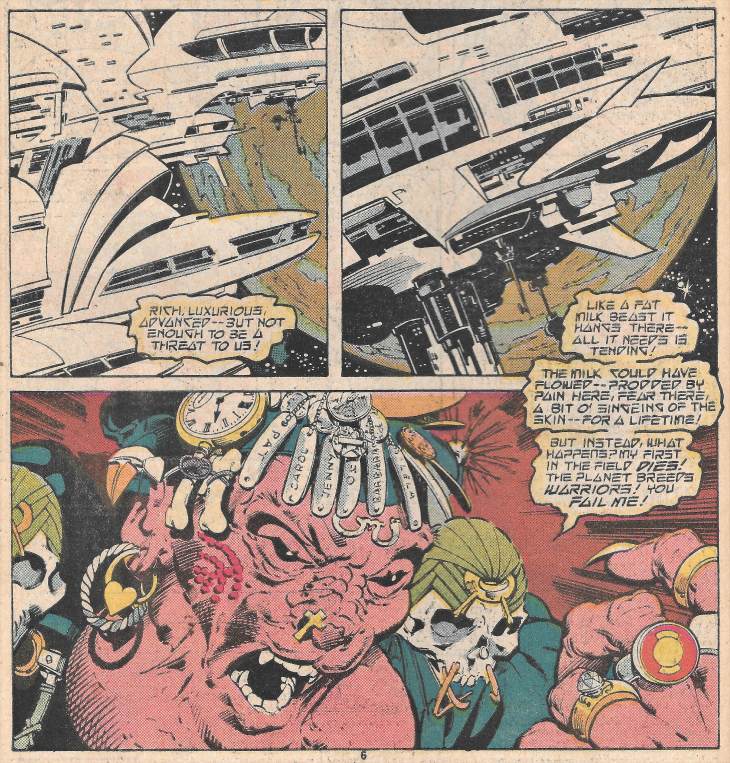 Their commander is upset because the Black Watch, the prototype for Strikeforce: Morituri, used their powers to kill his ground commander, First in the Field.

Ugly buggers. They could give Predators a run for their money.

While he berates and intimidates his troops… 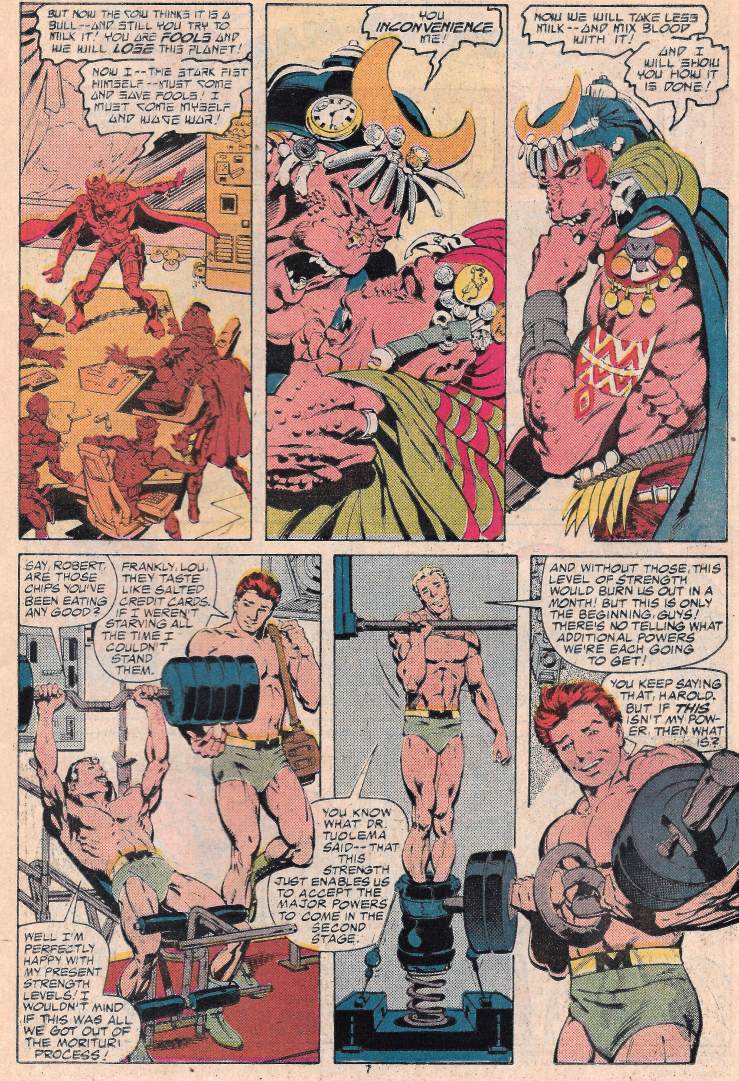 …the Morituri forces are working out with their enhanced speed and strength, honing their abilities in the hopes that their secondary powers manifest.

They are being observed by the commander, who is arguing with another service member about putting them into his “pressure cooker” to get their powers to manifest quickly. The commander has experience with doing that with the Black Watch members and seems reluctant to doing so. 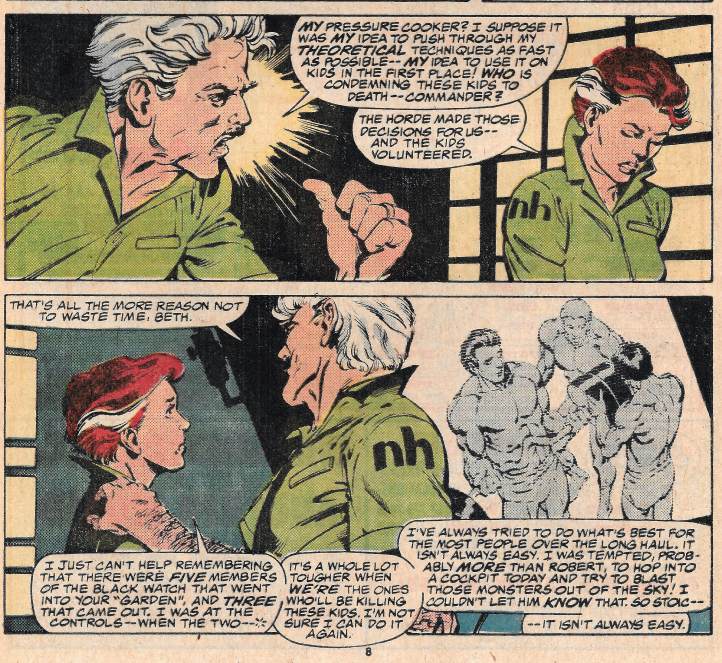 But reluctant or not, that is exactly where the non-powered recruits are sent – into The Garden. 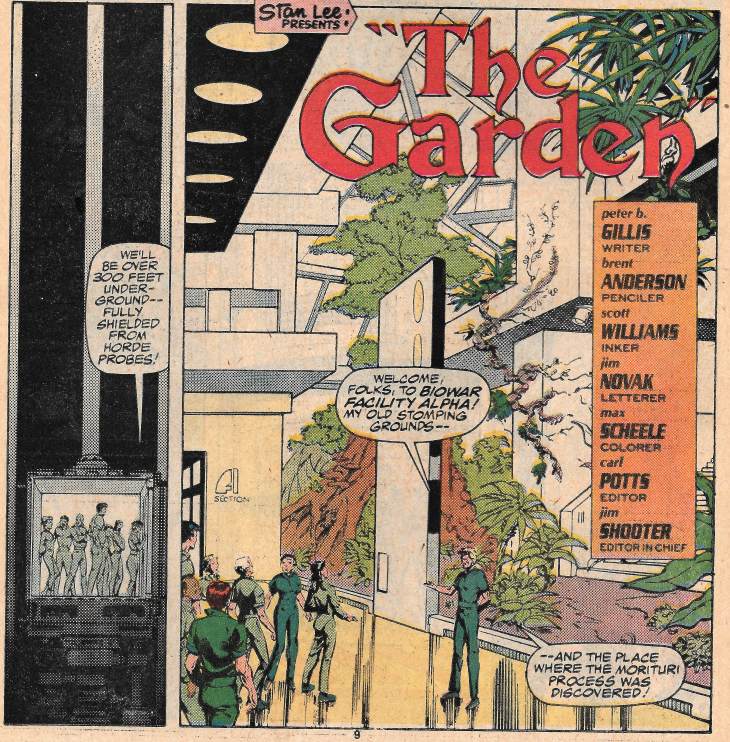 After being introduced to the concept that the Garden is hostile to them, the five are hustled into new uniforms that appear to all mess with the wearers necks for some reason. Then they are sent right into the dangerous garden. 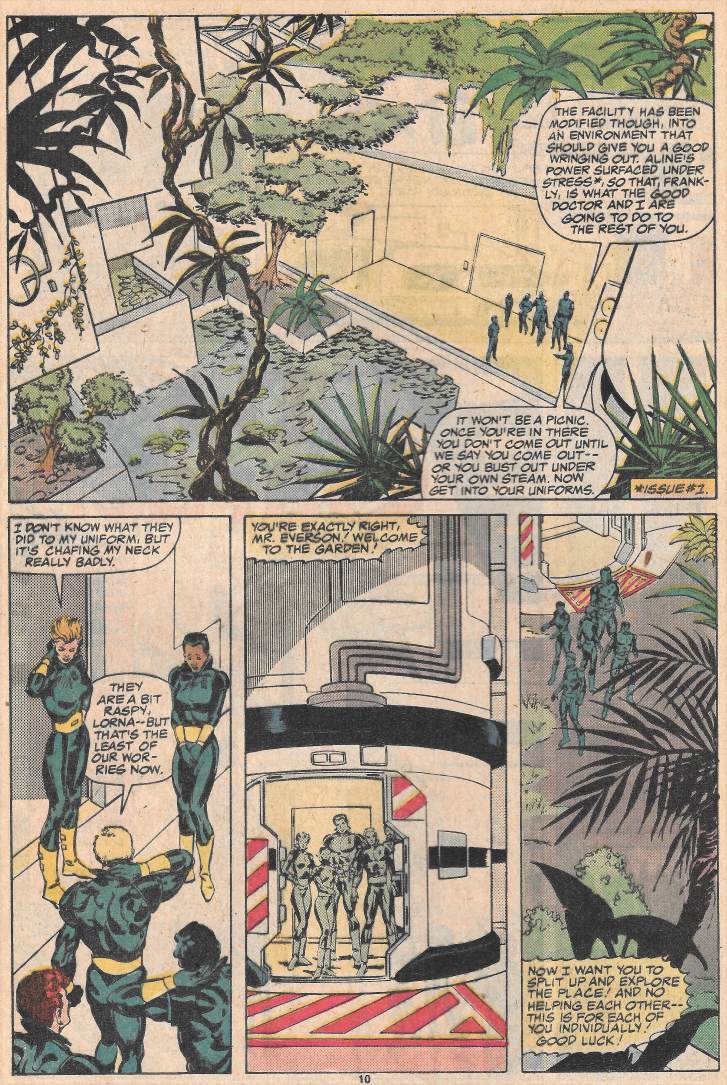 They all split up and again notice that the uniforms are messing with the back of their neck. There is a reason for this as you’ll find out soon enough. 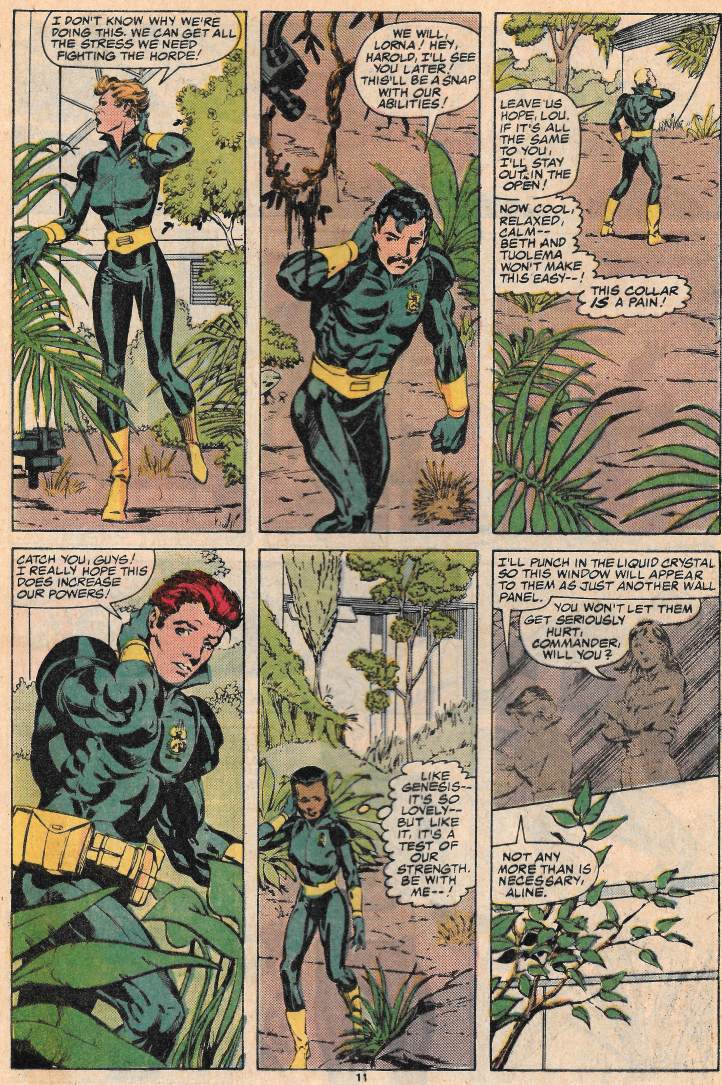 We start with Lorna, who immediately gets crossways with some fire-belching flowers… 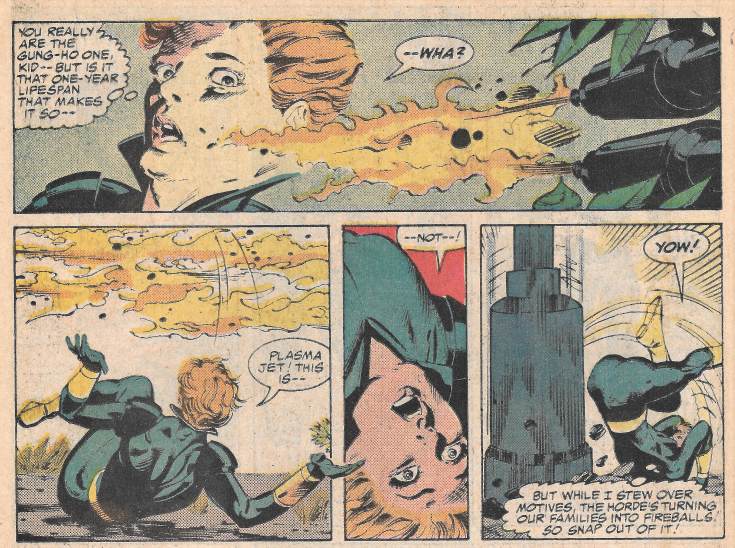 Lou, meanwhile, decides to take out the camera watching him so he won’t be attacked on-sight…. 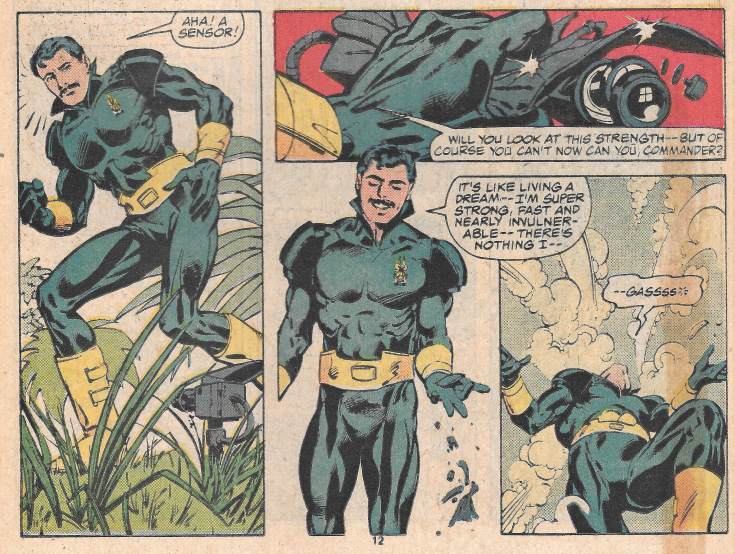 …which ends up backfiring a bit as he is gassed for being so close to the camera.

Harold rushes back to help Lorna (or so he supposes)…

…while Robert heads back to check on Jelene only to find her covered in vipers. He tries to help but is suddenly going through menopause and has a hot flash. So hot his suit starts to catch fire. 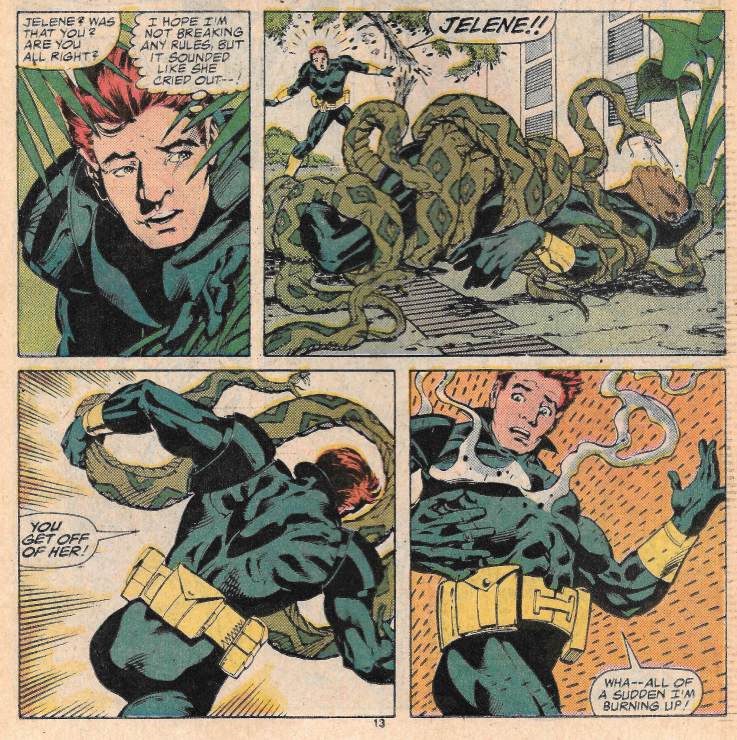 Harold ends up lured by this bird with a voice box that is speaking in Lorna’s voice. He ends up walking right into a laser bank. 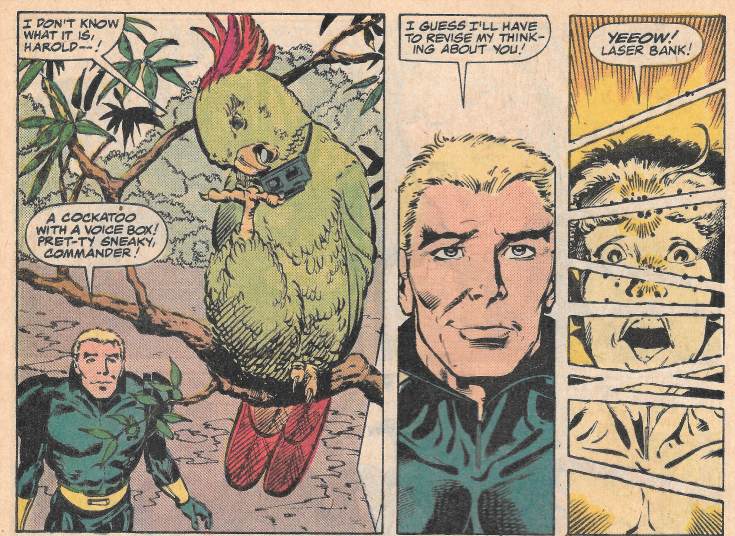 And checking back with Robert and Jelene, they really have their hands full. Robert finds himself caught in a microwave beam while Jelene is not just swarmed by those snakes, but a cage rises from the floor and locks her in with them. 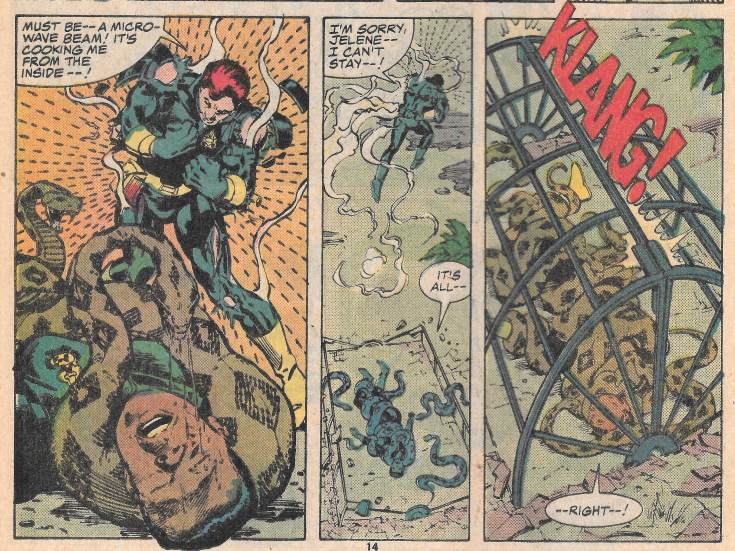 I’ll say this: The Garden makes the X-Men’s Danger Room look like a walk in the park. Sheesh.

Harold finally figures out the reason the costumes itch so badly. And in doing so he also reaches that upper level of stress that unlocks his powers. Now he can sense where the others all are by some super-powered means. 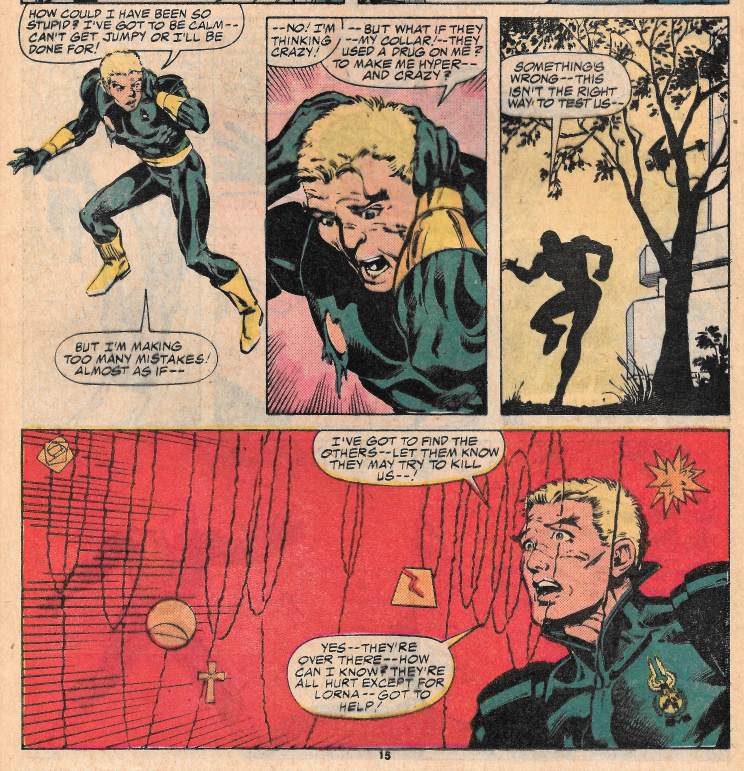 He comes across Lou, who is paralyzed and unable to help. Leaving him, he pushes on to find the only person on the team uninjured: Lorena. 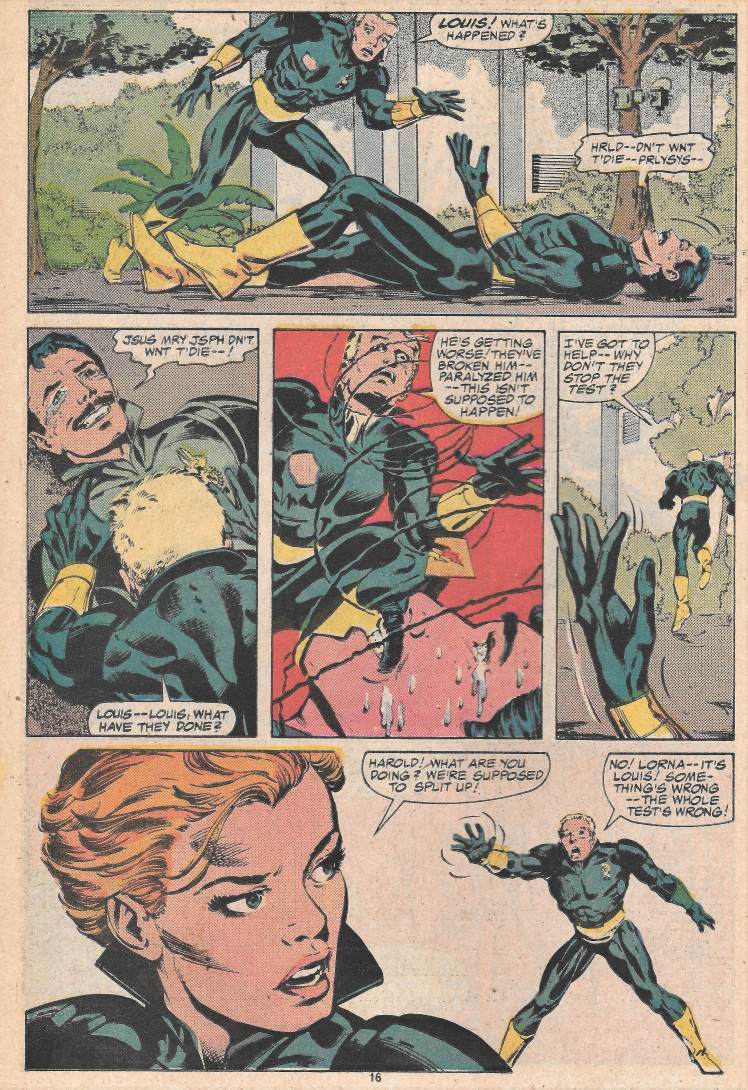 He starts to convince her that the commander might be trying to kill one or all of them, his belief being that she’s a turncoat for the Horde. Lorena, under pressure, gets her superpower. Meanwhile, in the command room Aline goes to shut down the test, but finds herself stopped by the commander. 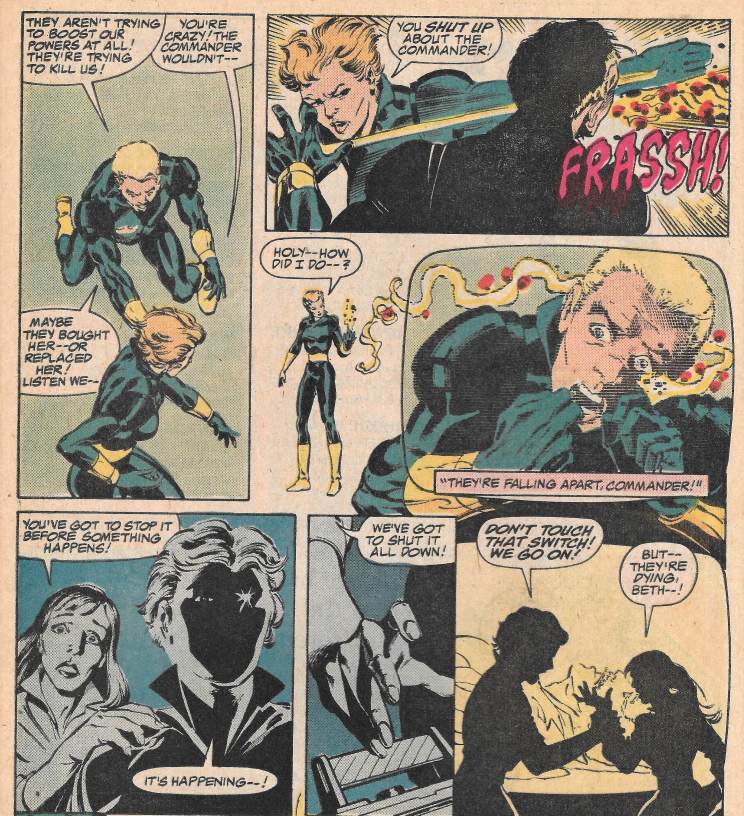 Lou suddenly appears to spontaneously combust in a flash of white light, terrified that he doesn’t want to burn up. 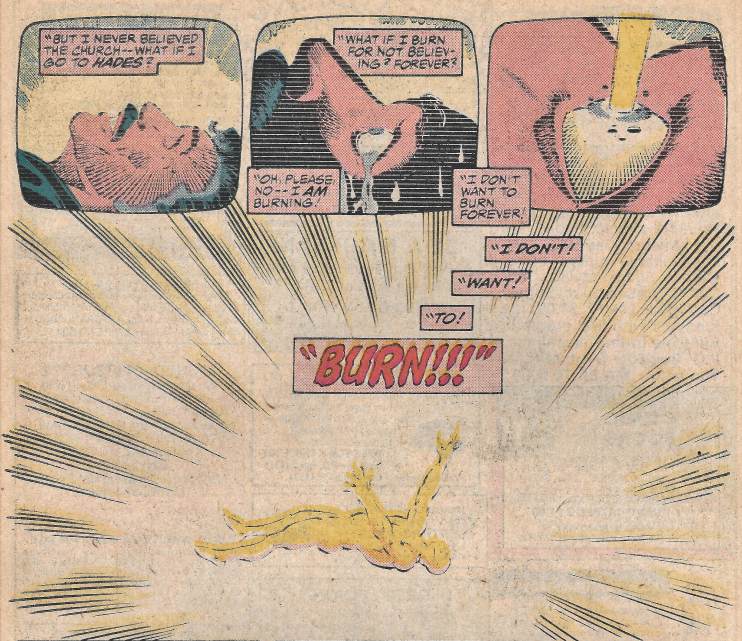 Robert has become obsessed with getting Lorena out of the snake cage , so much so that he starts glowing and screaming. Aline continues to press the commander to stop the test and…I have to admit this is pretty suspenseful. I do find myself wondering if they are going to kill off a couple of characters here. Remember that last issue ALL of the Black Watch characters died. This is an effective storytelling technique in this context. 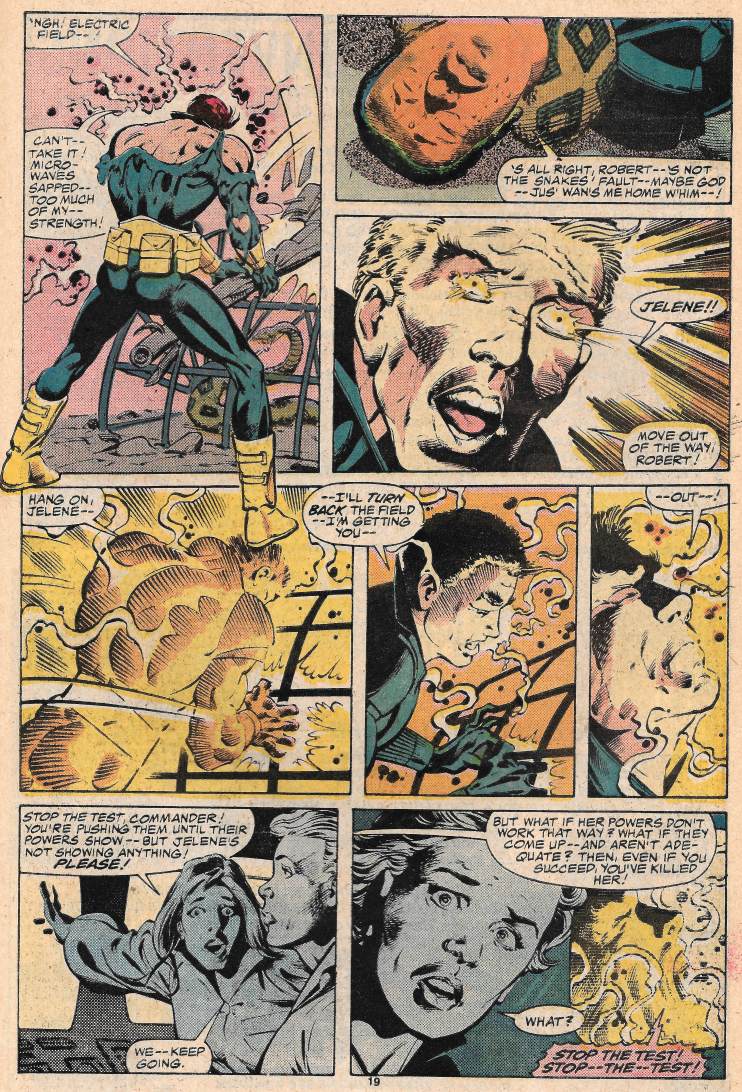 But no matter what, the commander is committed to finishing the test until all of the team have reached their potential. 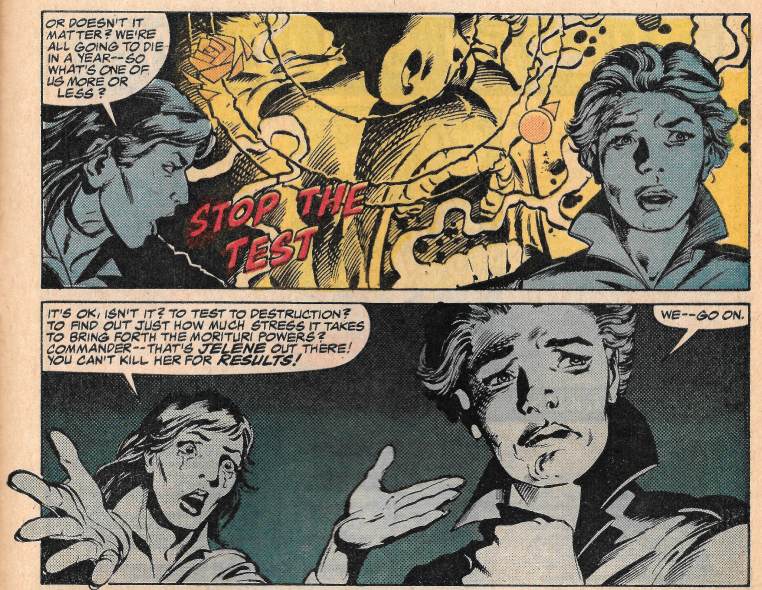 Unfortunately for her, Harold doesn’t see it that way. He uses his enhanced strength to jump through the command console’s opaque window in his paranoid fear that the commander has be compromised. He grabs the unenhanced human… 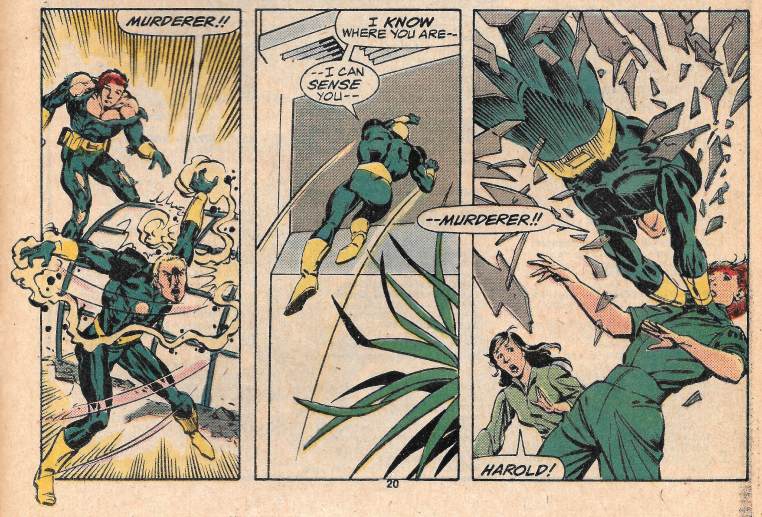 …and proceeds to whale on her while Lorena suddenly undergoes a miraculous transformation destroying the snakes and the cage from around her. 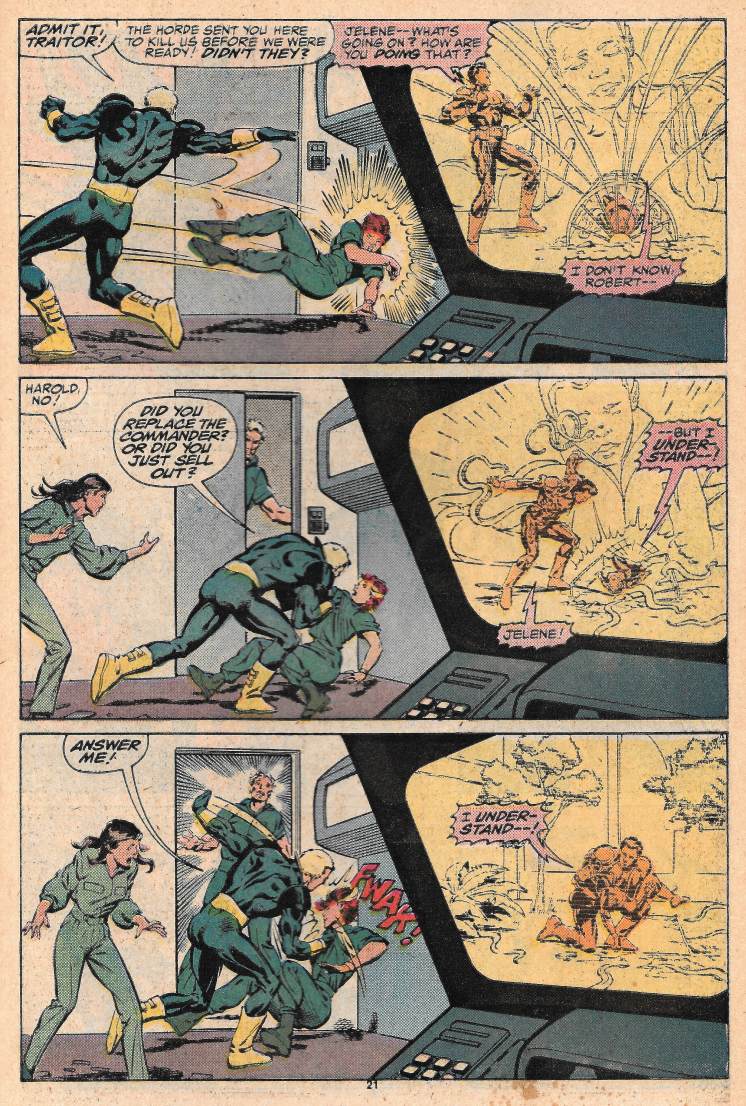 Before Harold can land the fatal blow, Robert and Lorena arrive to stop him. The commander is saved and explains the reasons the tests were so hard, causing Harold to forgive her and crumple at her feet. 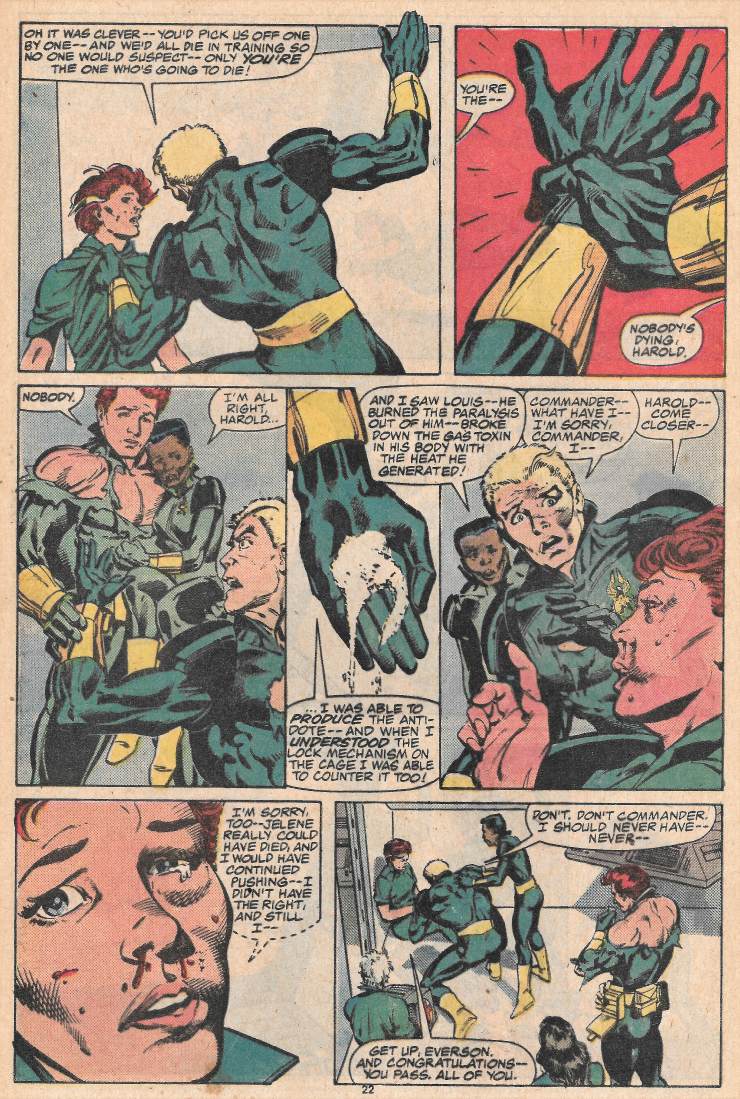 While the commander ends up in traction, everyone else graduates phase two of the Morituri process. They each get specially designed uniforms that make them look a bit superheroish, but are supposed to help the channel their newfound abilities. And I suppose we are in for an all out battle next issue with the Horde. 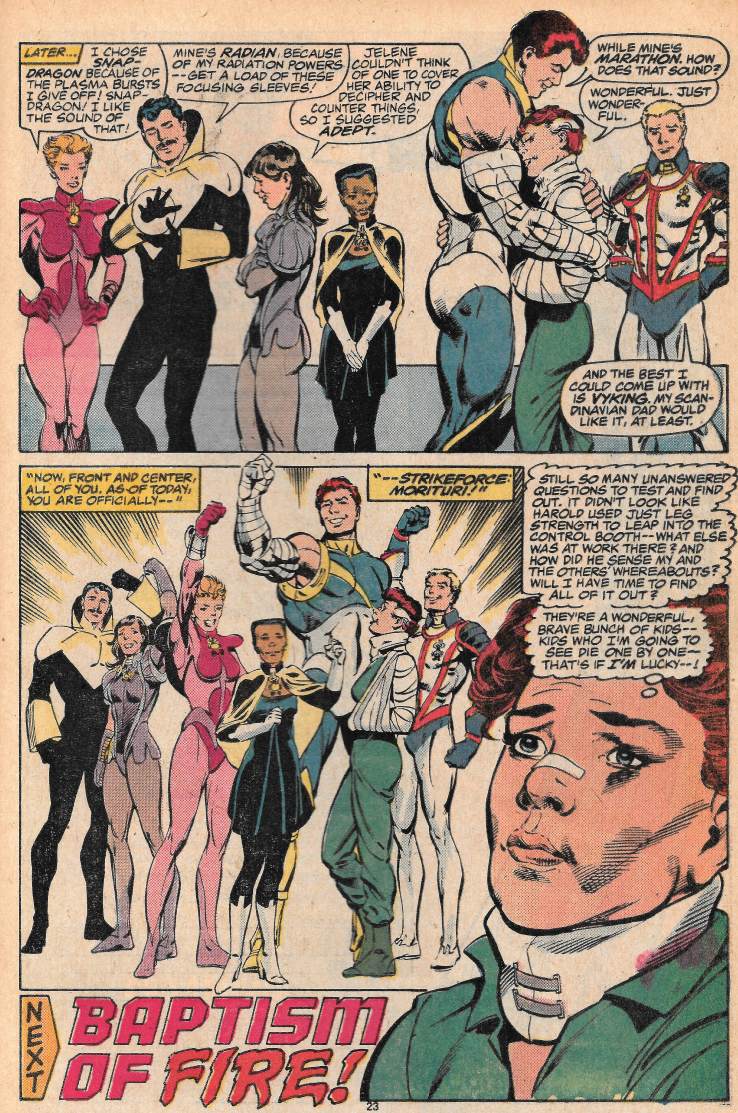 And perhaps not all of them will survive? It’s possible, I suppose.

Loved this. Crapbox has one other issue of it, but I wish it had all of them. I get why this was so popular. It had all the hallmarks of a great series: a love-to-hate-em bad guy, heroes sacrificing themselves to save humanity, superpowers, space stations to assault and death. This book looks marvelous. I’m sad it didn’t last longer than 31 issues.
Posted by SonOfCthulhu at 1:52 AM