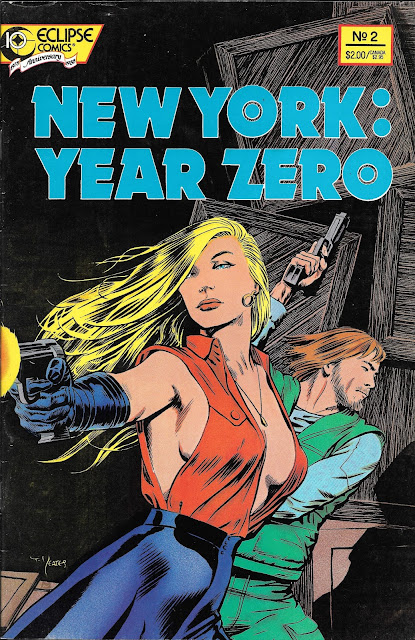 
Eclipse Comics put out four issues of Barreiro and Zannotto’s New York: Year Zero and coming across this one is a treat. The series originally saw release in 8 page hunks in France back in 1982 but Eclipse brought it stateside. Barreiro’s art is some of the crispest I’ve seen and it saddens me to hear that he passed fourteen years after this book saw print.


Issue one, which I don’t have (but is on display here), had our unnamed protagonist escaping Earth for Venus after having fought in a disastrous war. He returns in 2015 to find that New York has become the capital of the five United States and houses 30 million people on its cramped streets. It’s an ugly city where violence and muggings are common. His trip back has cost him everything but the bulletproof vest on his back and roughly eight dollars, so he has no choice but to make the best of it.

And that’s where this issue picks up. With no preamble and no update box, we are thrown onto the mean, dystopian streets of a very Ridley Scott version of New York.


How much has changed from our own New York, you will ask? Well… 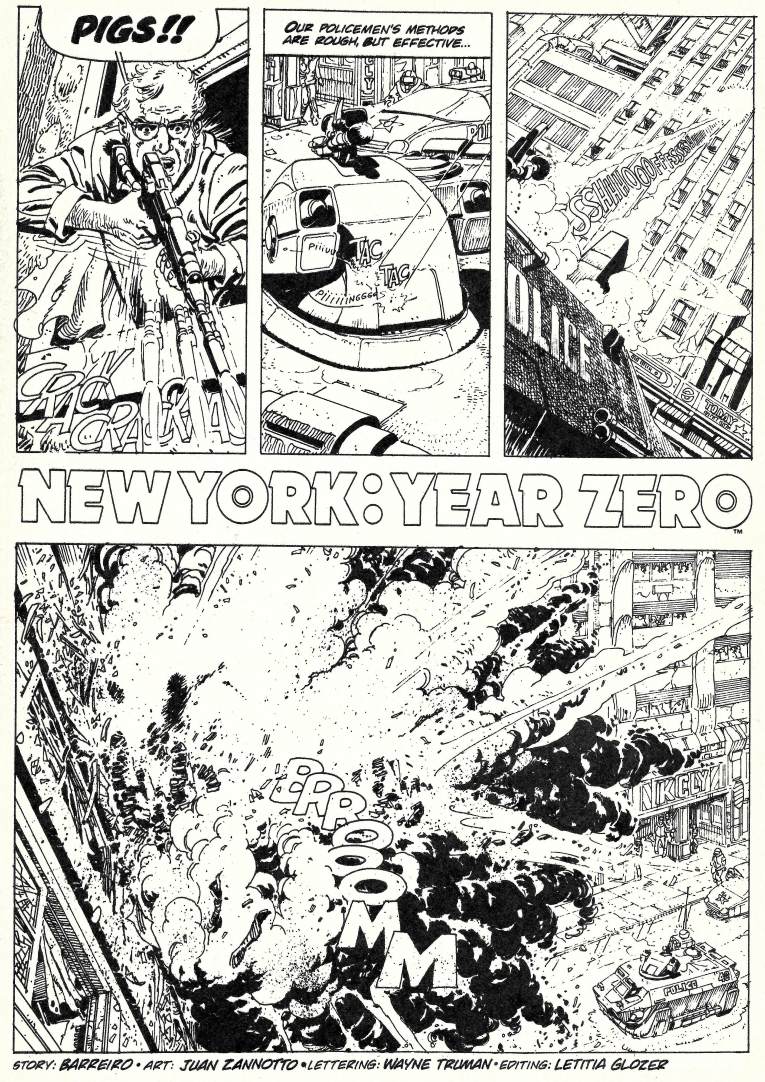 …to my knowledge we don’t have guys throwing open their windows and opening fire on passing police vehicles as a way of protest. We also do not have “tank police” that fire live ammunition rounds into crowded apartment buildings as a form of urban pacification.


At least I don’t think we do.


Immediately you get a taste of Barreiro’s pencils and they are something to behold. Sharp and crisp lines with lots of little details. Note the buildings to either side of the one hit and the curtain billowing behind the shooter. There is even a hint of his charred body falling from the apartment where the missile hits. I kind of fell in love with his work on the first page.


The story took a bit longer to warm up to. Being thrown into this one made it hard to follow. But soon our protagonist identified himself with a bit of voiceover commentary on what was going on. 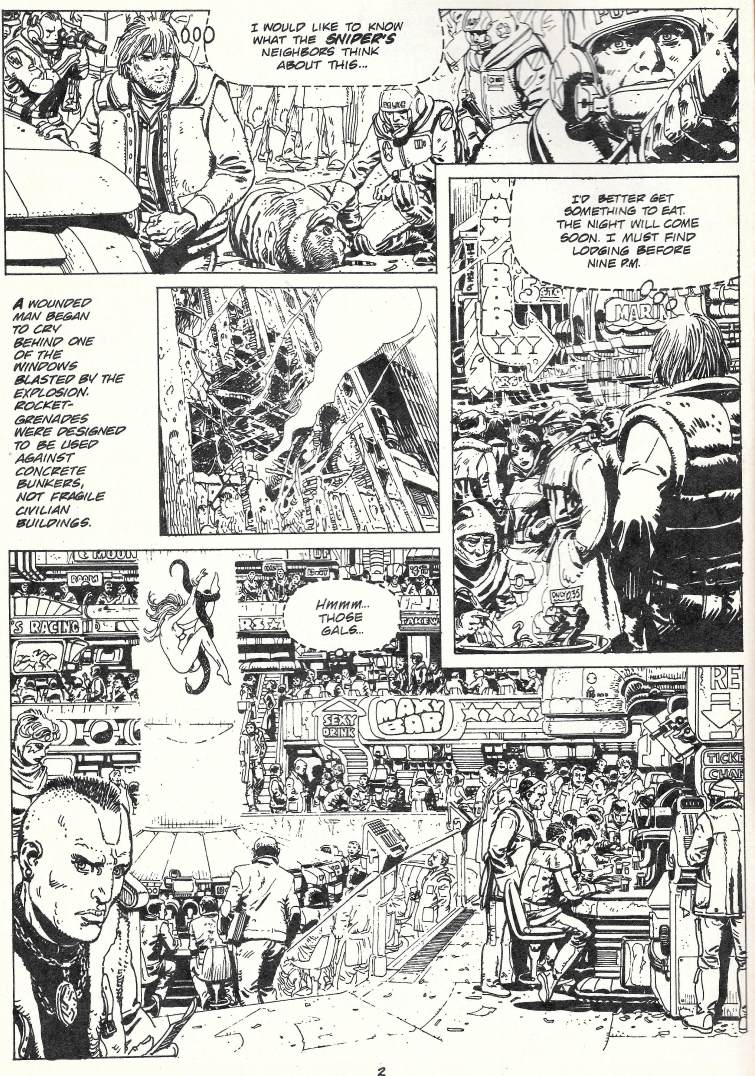 He sounds a bit like us, like he’s a little bit of a fish out of water here. I also wonder how the neighbors would feel if an exploding shell took out the apartment next to theirs. However, we don’t dwell too long on this setting. It is clear that it is window dressing showing how violent this world is. While our protagonist eats at a seedy bar, this becomes even more evident.


Because as he eats, three “lesbians” start staring at him. And since he has identified them as lesbians, it’s pretty clear they aren’t interested in him for his body. 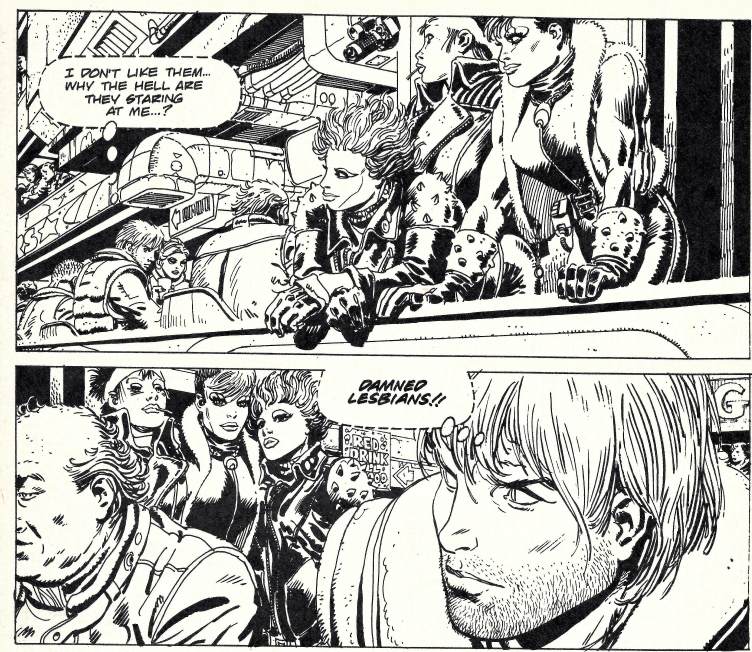 Deciding it would prudent not to have dealings with the three young ladies, our hero attempts to slip away unnoticed. Unfortunately, he is not successful. 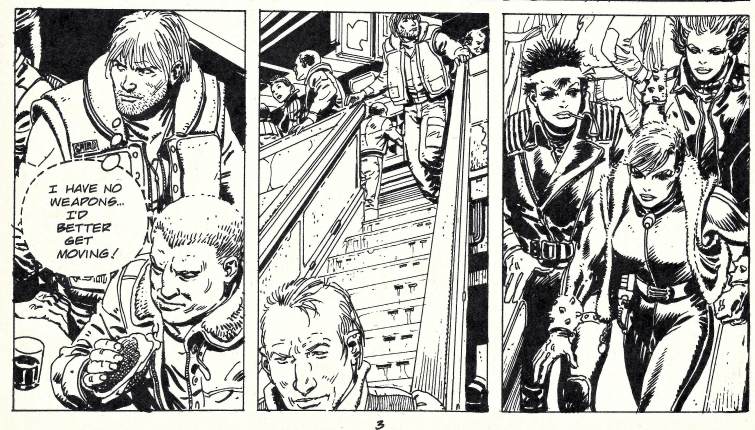 After leading them through the crowds in hopes of losing them, he realizes he will get caught… 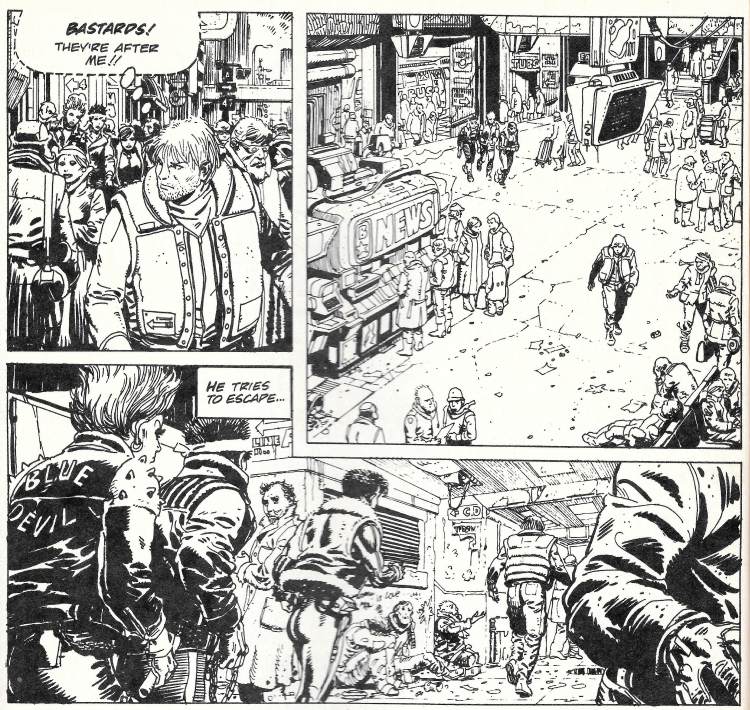 …so he makes a stand. He starts by asking what they want, since he has no money.

The gang leader demands his bulletproof vest, which is his only material possession worth anything. He makes like he is going to hand it over…

…and then kicks the main lesbian right in the vag. That’s gotta hurt! Maybe? I’m male. Would that hurt a female? Anyway, he also punches them quite a bit too.

I can’t help but think that “Damned worm” comment is kind of sexist coming from the lesbian gang member. He gets away with the girls hot on his tail, forcing him to do something normally unthinkable.

He rushes to a series of “hotel rooms” called Automatic Bedrooms. Due to their cramped size and their likelihood of being your death, they have attained another nickname, however. The residents call them “The Coffins.” 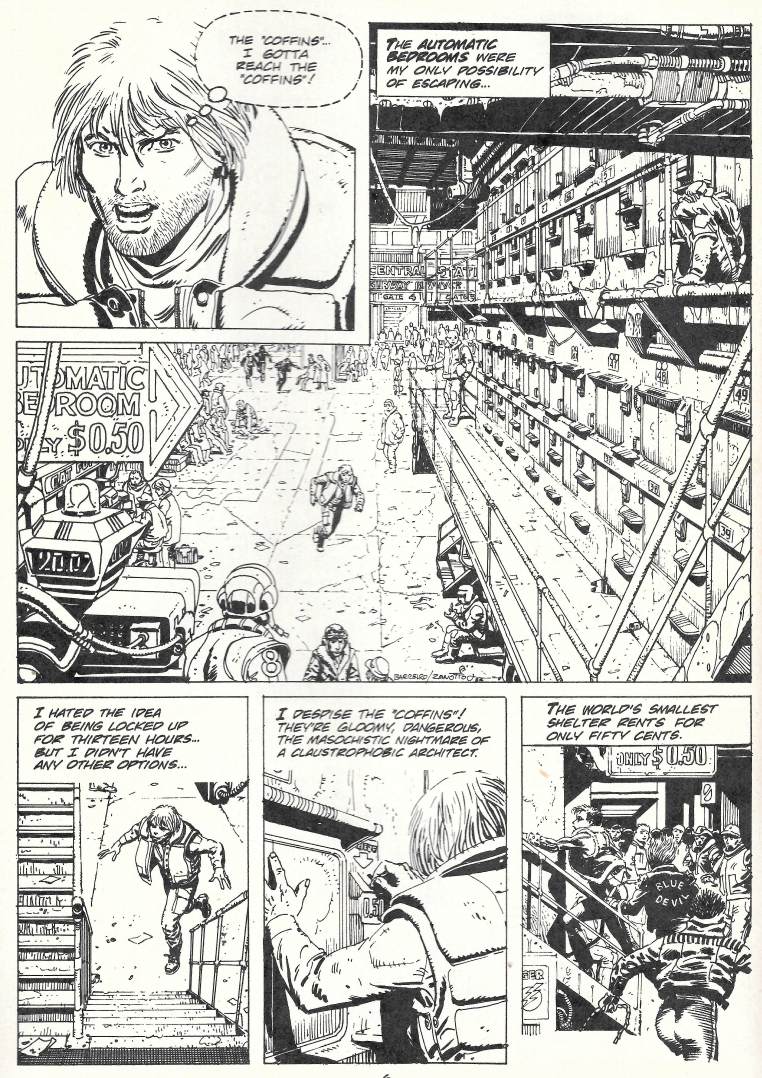 With the gang right behind him, our hero pays the .50 fee and puts himself in the claustrophobic hotel room. The bulletproof door slams shut on the three just as they arrive.

It was at this point that I started to really get in the vibe of the universe created. Our here states that these open at exactly 9 am in the morning, so I theorized that it might be possible for the lesbian gang to be waiting for him when it opens? What would prevent them from just showing up and killing him then? The fact that I was starting to buy into the world presented and worry for the protagonist says a lot about how involving the art and story is. 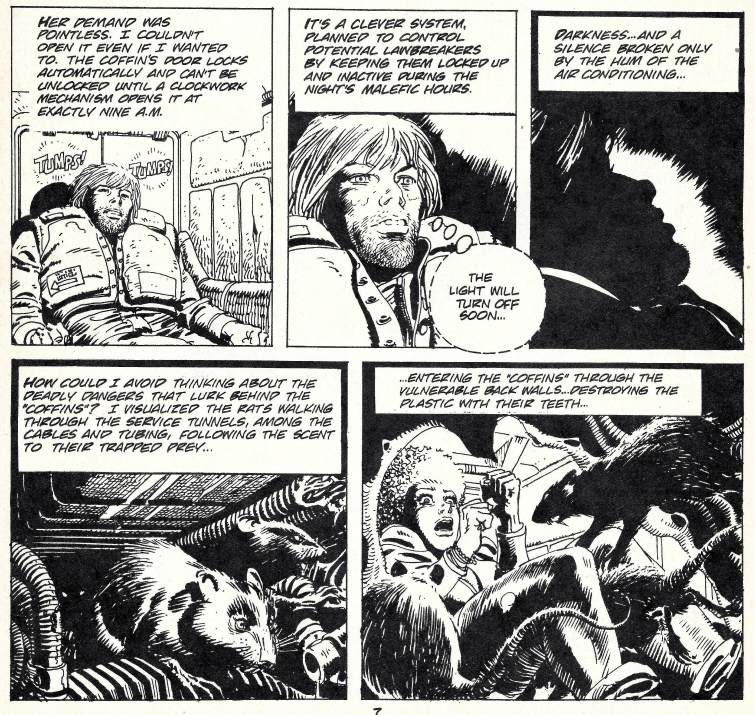 But out hero isn’t worried about that. He’s struggling to contain his fear at being trapped in the dark with the possibility of rats coming into his locked cell and attacking him in his sleep.


In a gruesome panel, we are shown neighbors on either side of our hero that expose fatal flaws with the Automatic Bedrooms. One his eaten by rats while the other struggles to catch his breath. 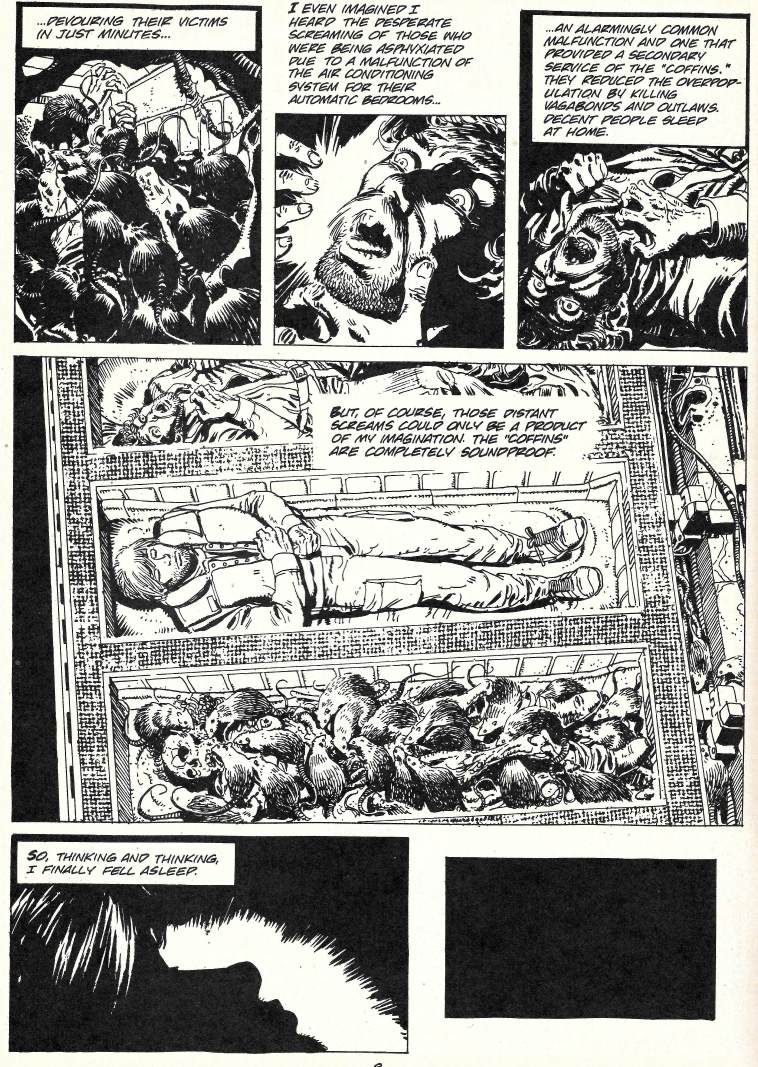 Here is where the book got my buy-in. The next morning at 9:00 am a force of police and sanitation arrive. Now when our hero locked himself in, I immediately labeled him and the book as dumbasses. Placing yourself in a tiny chamber for 12 hours just makes you easier to find. Nothing to prevent the gang from moving on for that half day and then coming back at the exact moment your coffin pops open. 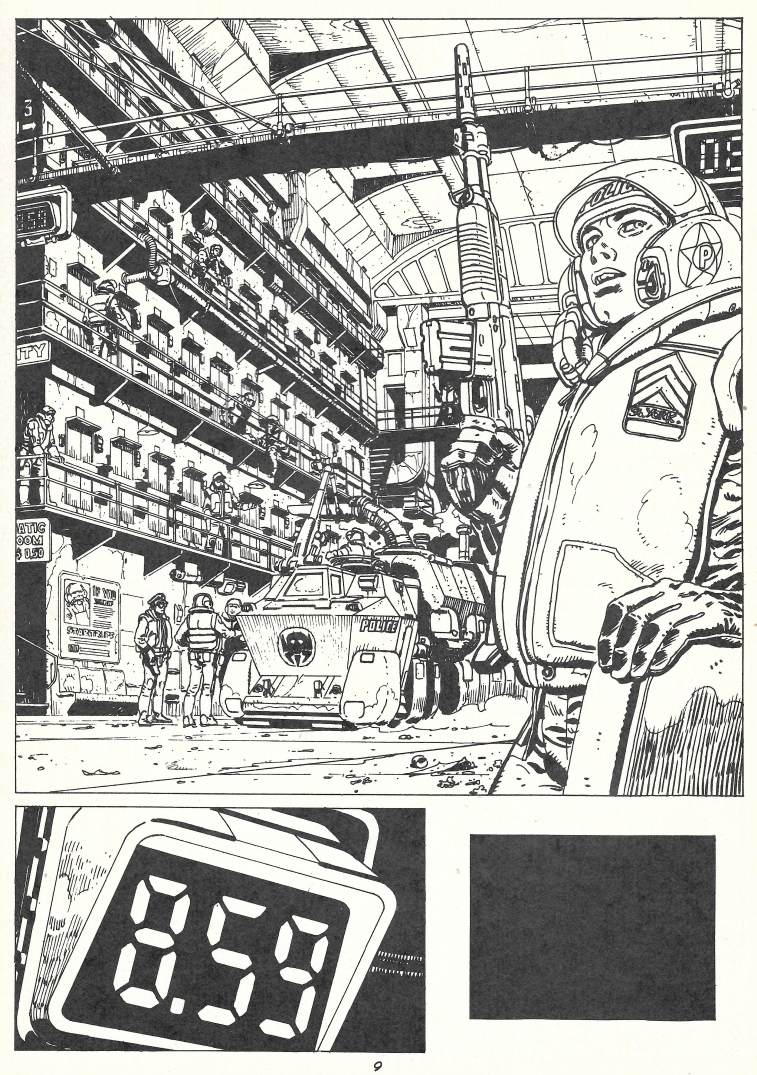 See what I didn’t know was this: 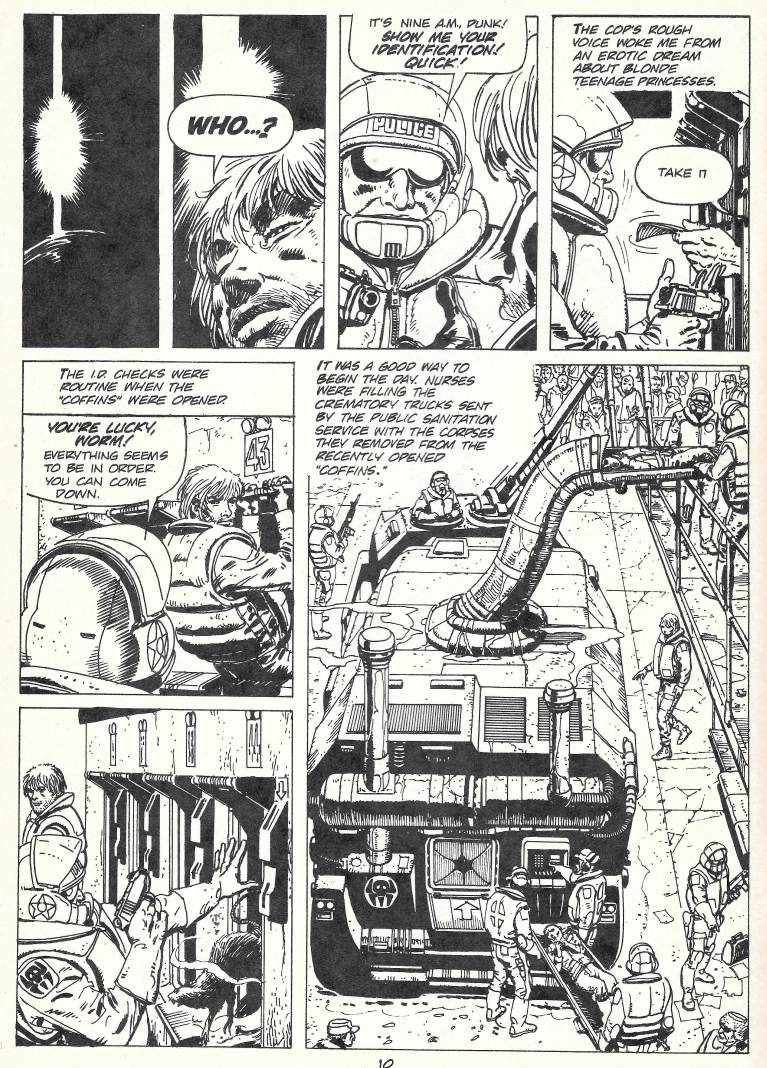 The entire area surrounding the coffins is busier than a bee hive with sanitation workers and LOTs of cops. It would be crazy for the gang to show up here, because as we just saw on the first page of the book the police in this universe care little for collateral damage. They and any bystanders would be a big crater if they tried anything on our hero. So, he gets to walk away.

It doesn’t solve his weapon problem, however. But, as luck would have it, their interference in his day causes him to discover that he has something to use for cash. 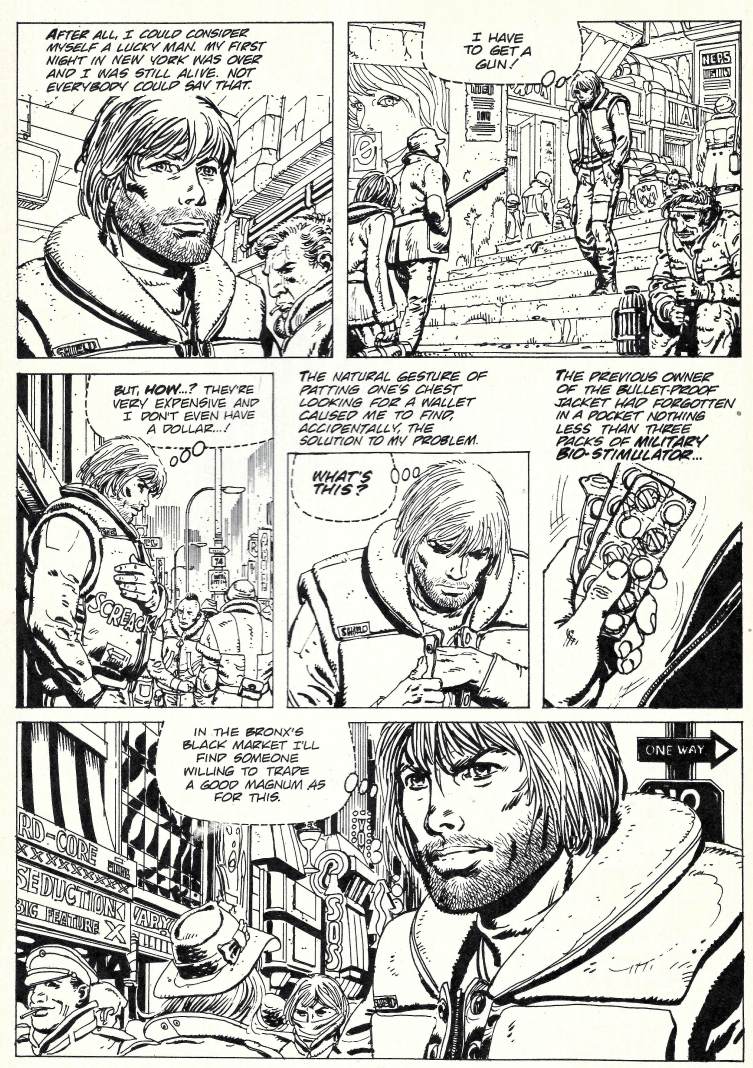 That’s where we end up next, in a part of the Bronx where everything is for trade or sale. And I do mean everything. 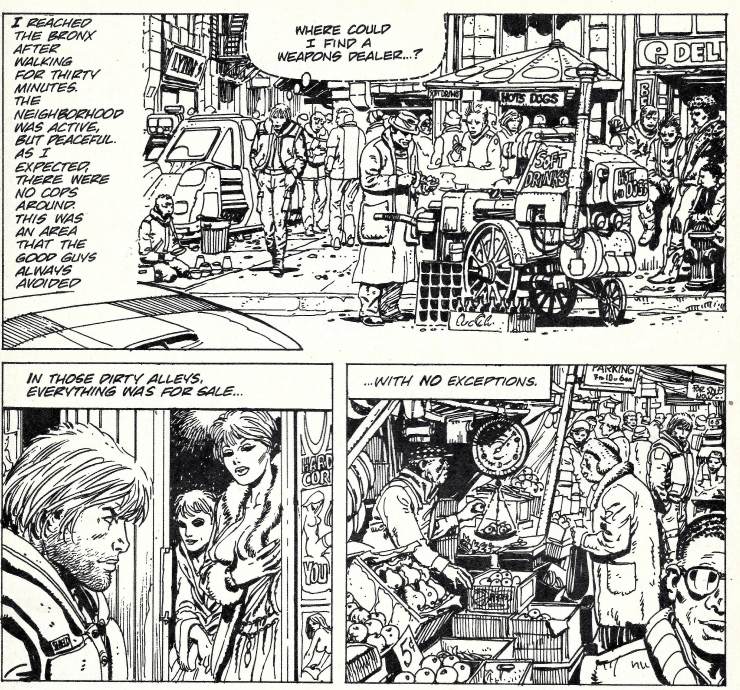 Note the text boxes state that “everything is for sale” and it shows the girls prostituting themselves. And then it moves to the next panel and for added emphasis it states “…with no exceptions.” And the picture is of a guy selling fruit. Are we supposed to be shocked at fruit sales but not prostitution? What exactly is this book saying here?


In the future only a brave man will buy pears!


Not sure what that is all about, but we move on to protagonist finding an arms dealer. 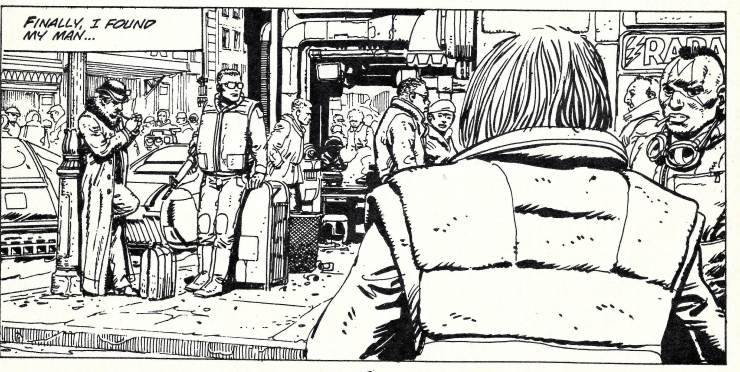 After a bit of haggling, the hero gets the gun he wants… 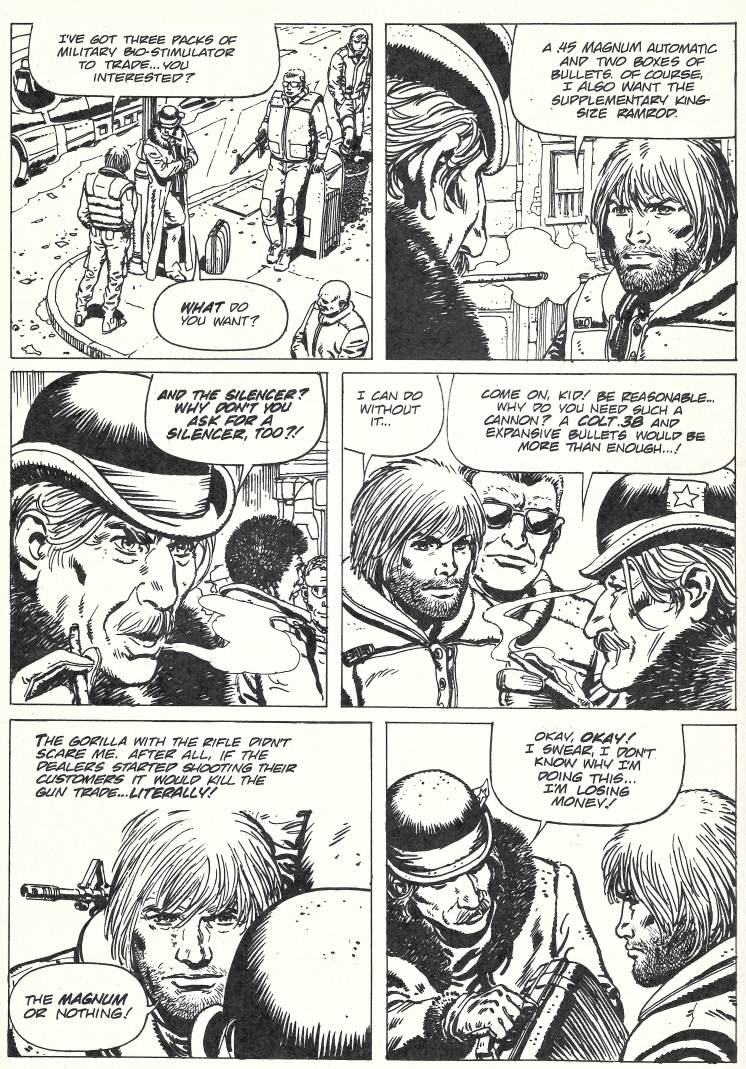 And he is loaded up on both regular and explosive ordinance. So one problem solved. 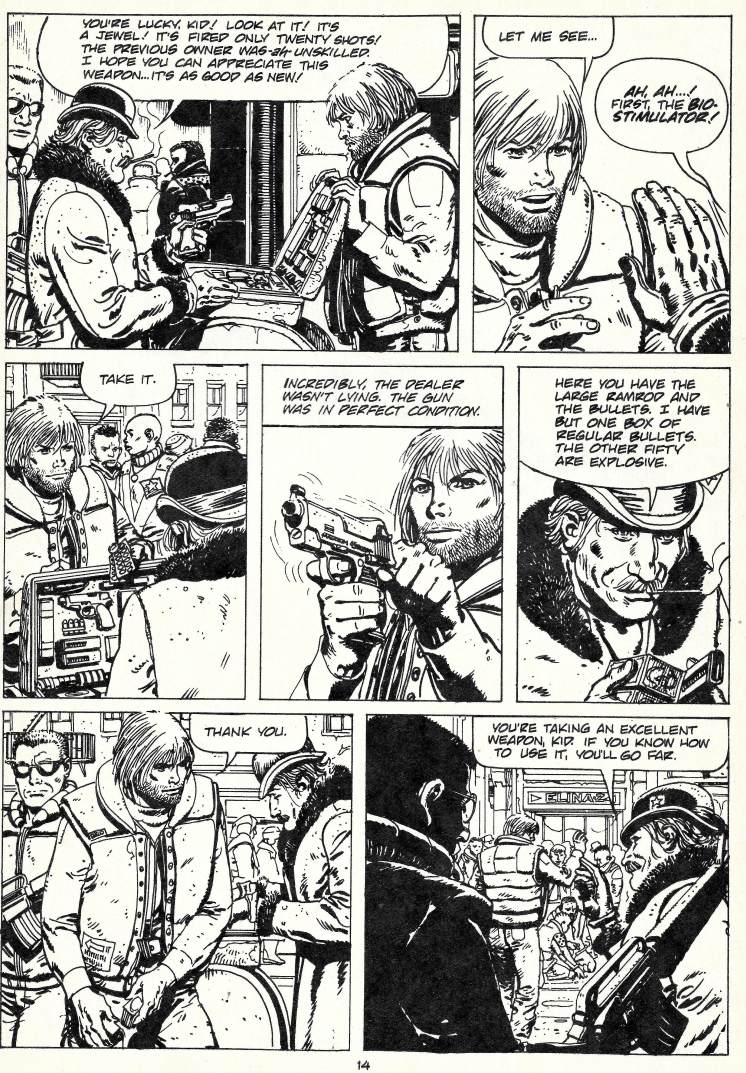 However, before he rounds a corner a new problem walks into his life. It begins with this little procession of soldiers guarding someone important. Our hero surmises that their destination has to be the slaver’s quarter as he can see no other reason for someone so wealthy to expose themselves to such danger as the open streets. 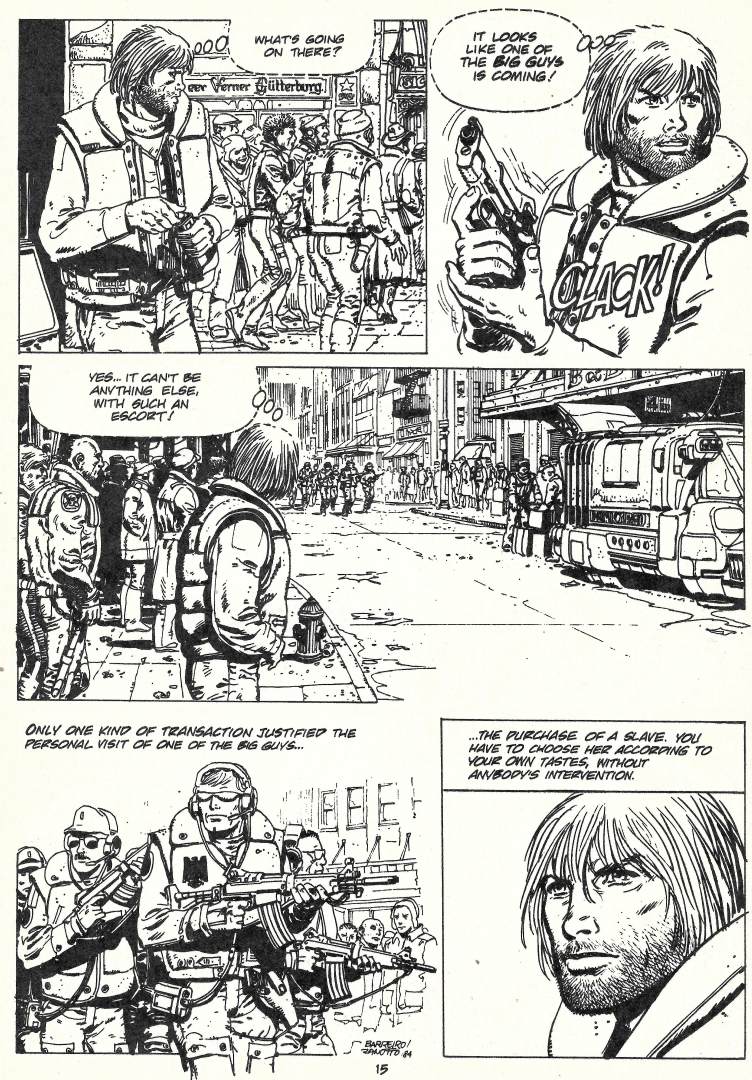 To his surprise, the bigwig is a sexy woman in a very cleavage revealing outfit. Barreiro really knew a thing or two about drawing sexy women. I think our hero feels it too. 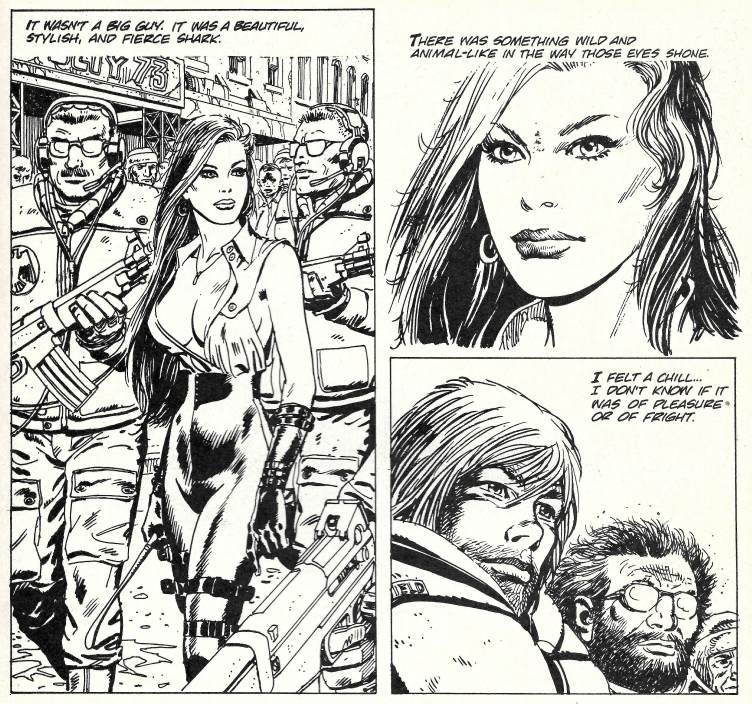 I love that she’s holding a crop. What the heck is she supposed to do with that? It’s not really a weapon, so it can’t be for protection. Does she use it to discipline her guards? If they get in her way or mess up does she give them a whack?


Well if that is the case, her arm is about to be very sore, because none of her entourage expected someone bringing a bazooka to their gunfight. 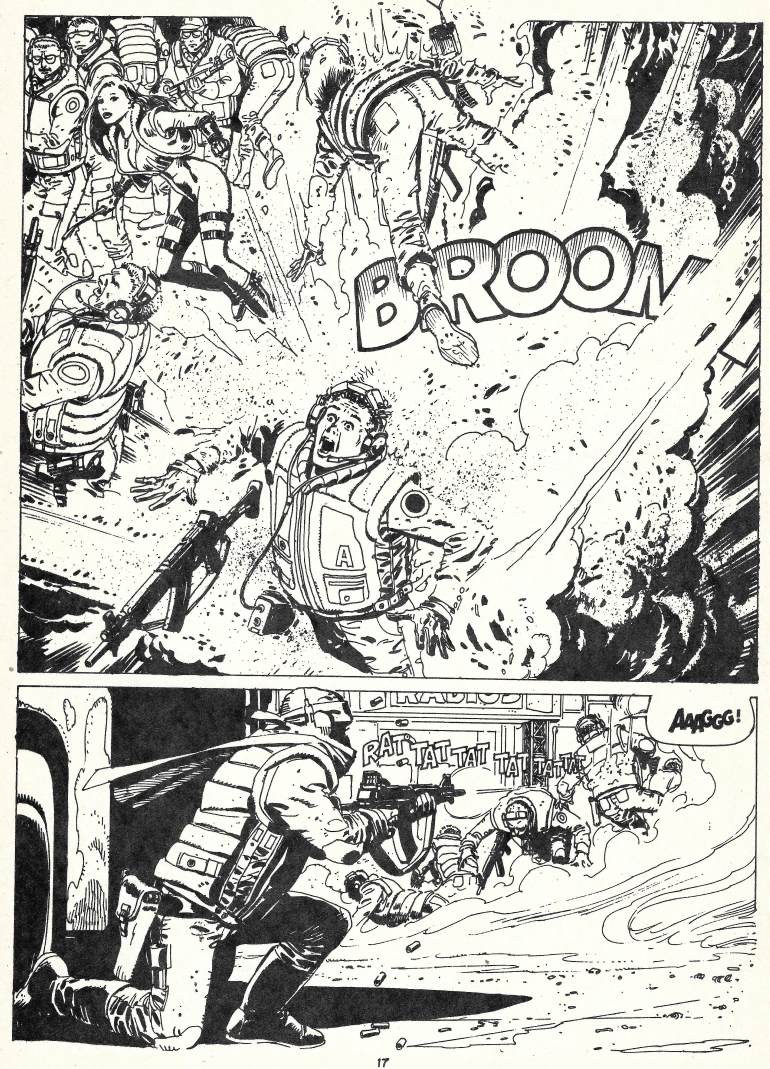 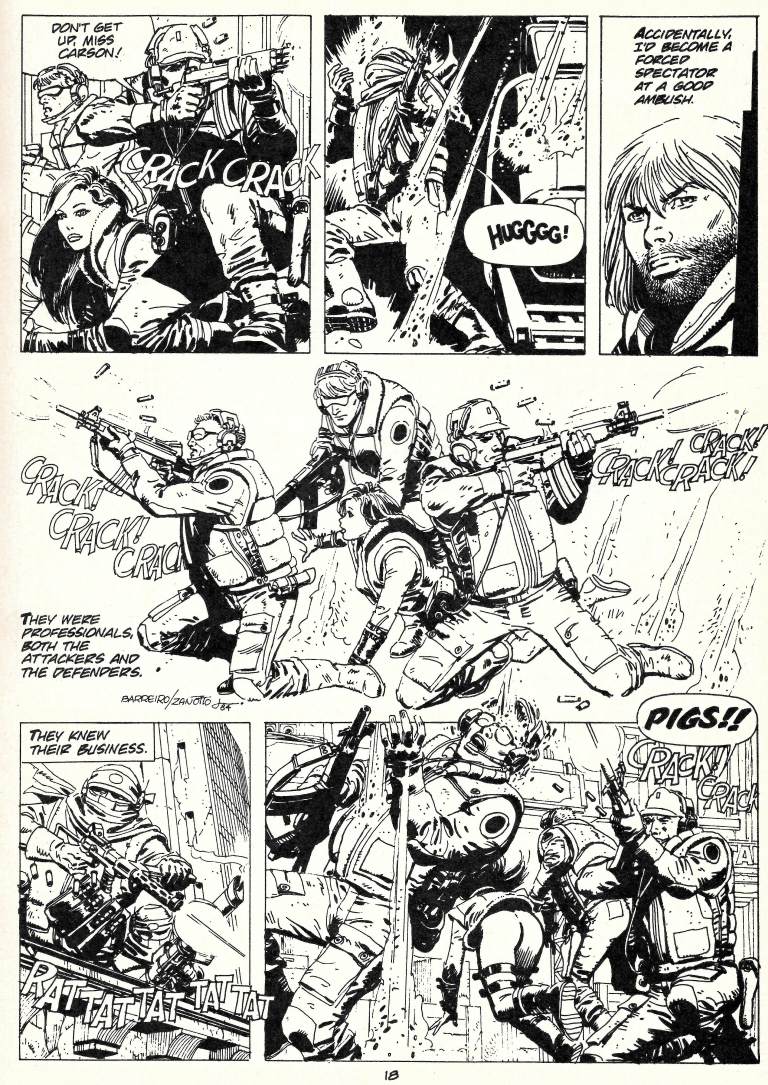 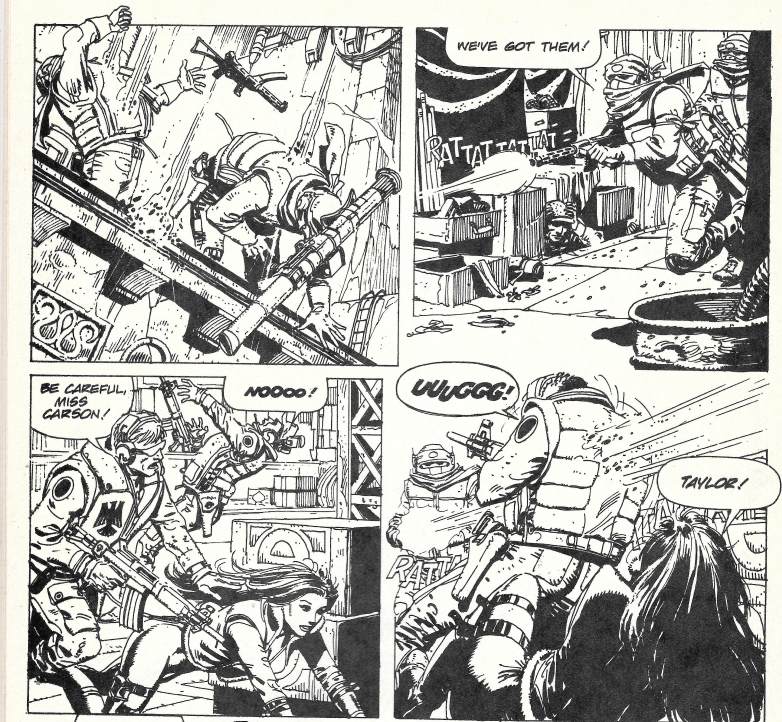 Until only she is left.

She is far from helpless, however…

…and looks like she could make her escape easily, running right past our hero’s huddled position. 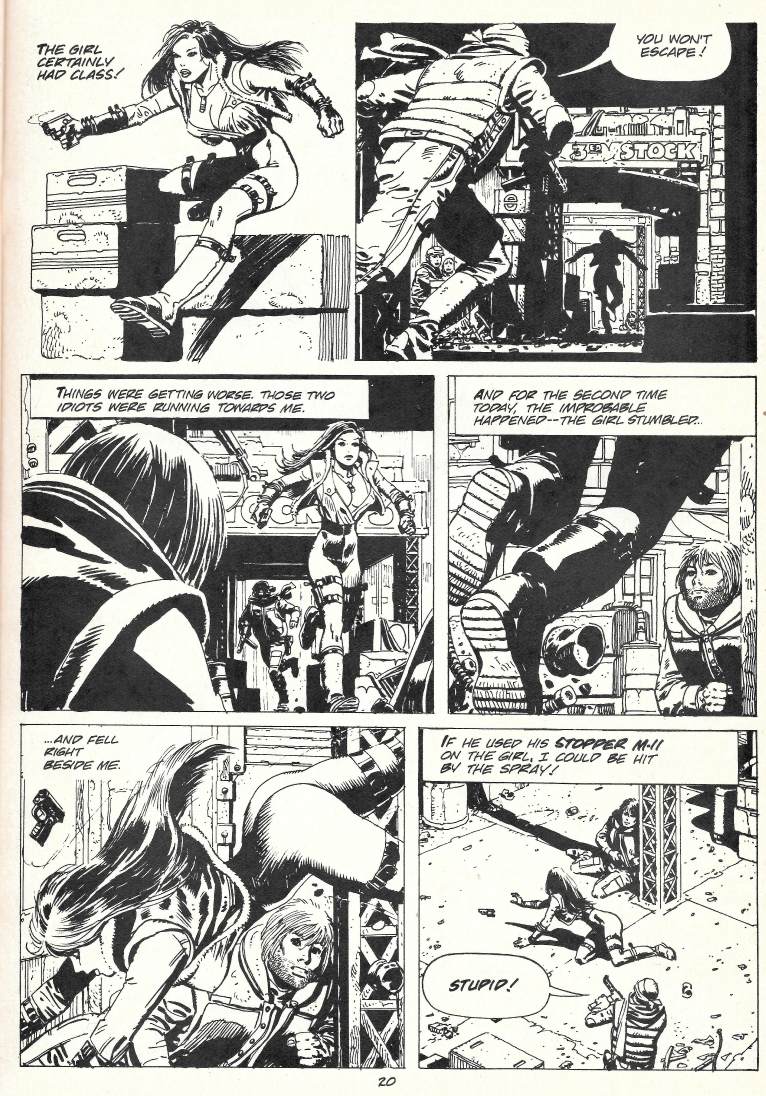 Except at the last fateful minute she stumbles, throwing herself on the pavement in front of him. The angle and the spray rate of her pursuer’s weapon puts the hero right in the path of those bullets that will soon be coming, so…

…he has no choice but to blow the guy’s head off. I LOVE this gritty, realistic feel. Our guy doesn’t rush out and try to save the girl. He is trapped into a situation where they both would be killed if he doesn’t act, so he does. In saving her, he also saves himself.


And while she may be grateful… 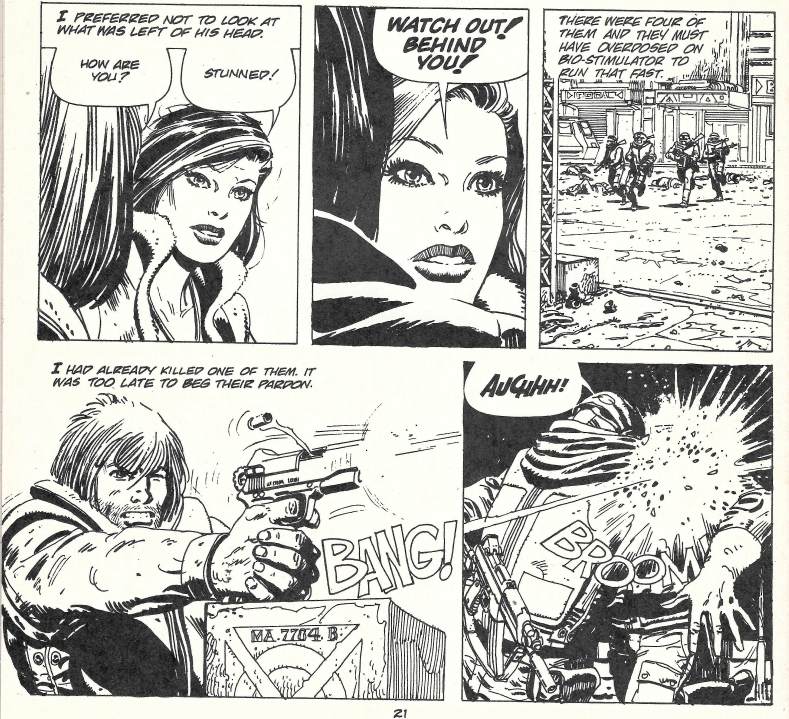 …the guys that want her dead clearly are not. And like it or not, our protagonist has now chosen a side in all this. He has no option but to defend himself…and the girl.

Which he does…right up until his gun jams from the cheaply made exploding bullets. Seems like they’ve punched their ticket. 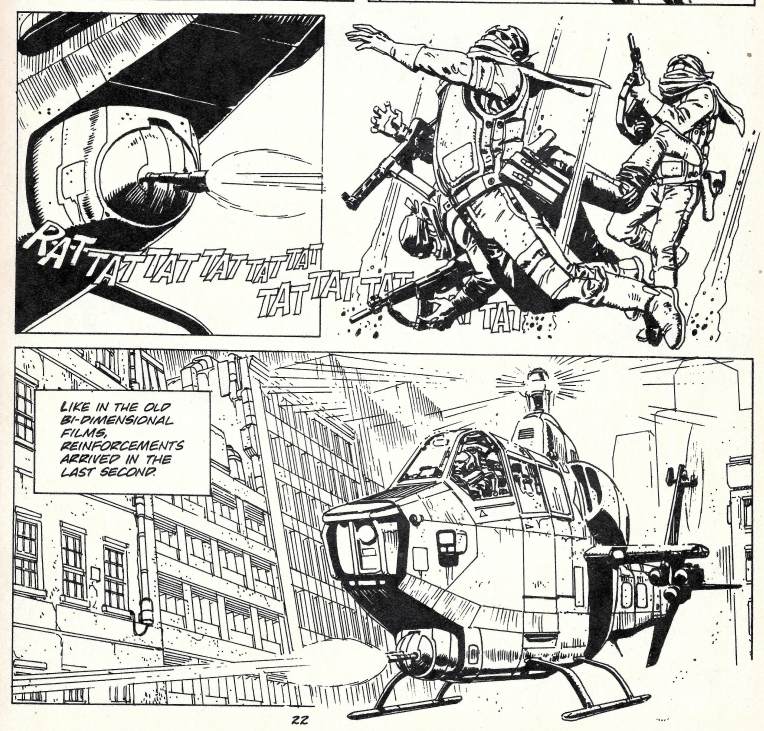 That is until a helicopter gunship in the girl’s employ opens up on the bad guys at the very last possible instant. 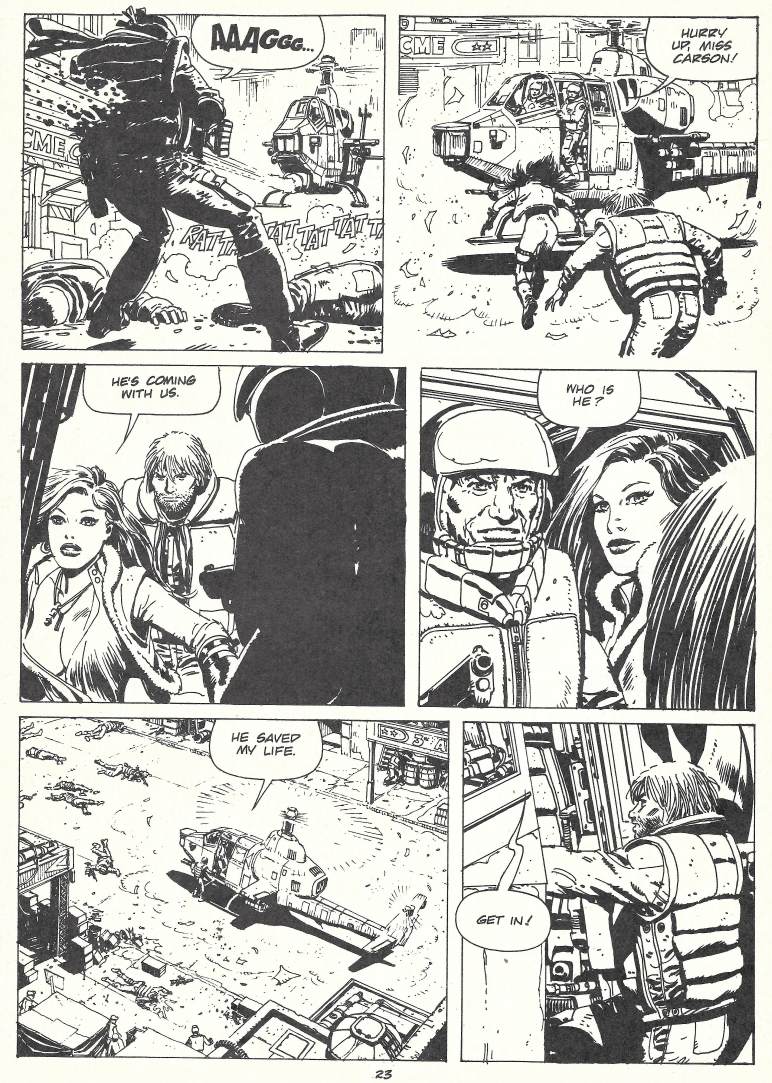 They blast the last of the bad guys and our protagonist is allowed to leave with them, to perhaps a more dangerous situation. 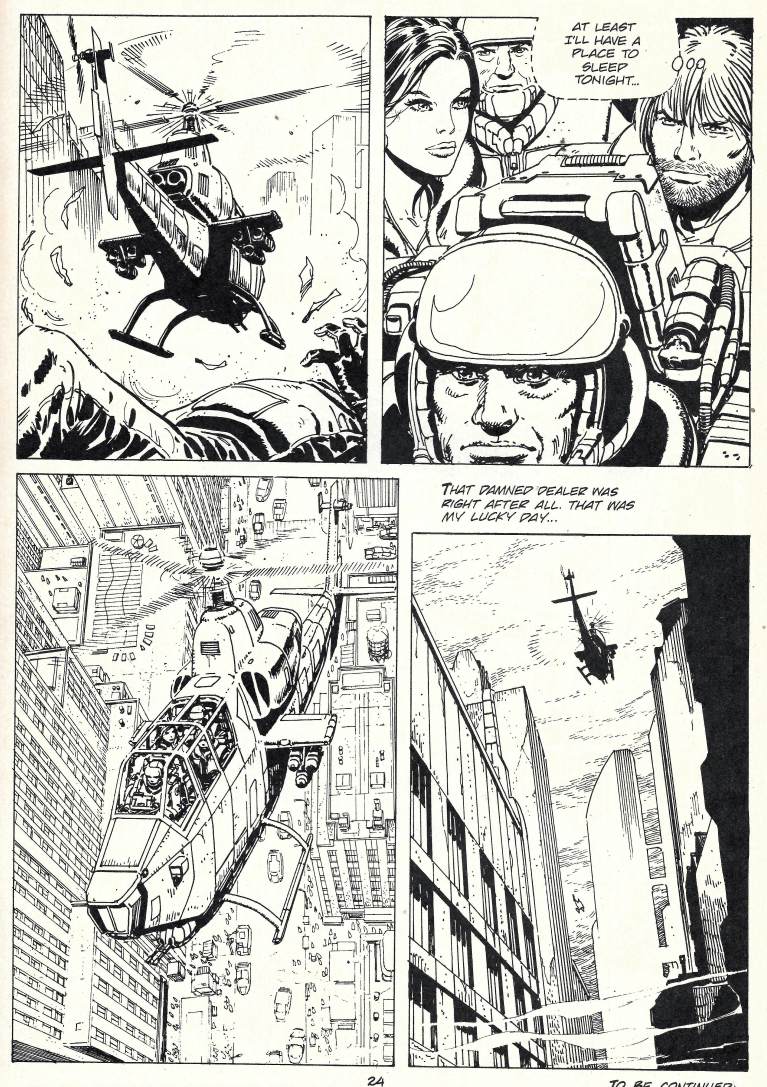 Only the next issue would tell, as the blades spin, that’s all for this chapter.


Gritty sci-fi at its best. Highly recommended if you enjoyed this issue. So much good stuff in this book both in the writing and the art.

Posted by SonOfCthulhu at 3:19 AM