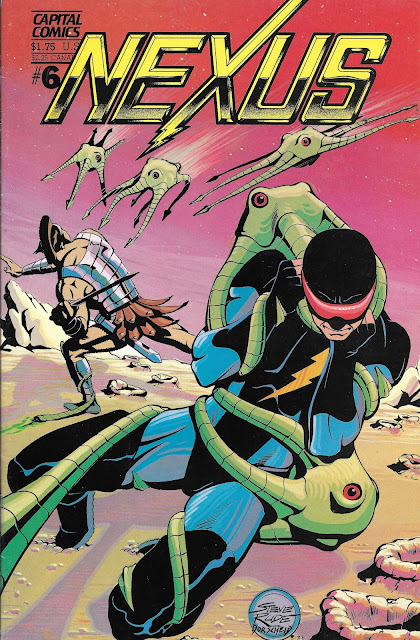 Sci-Fi meets Superhero at this Nexus

Nexus is one of those two-great-tastes-in-one kinda deals. Sure, it has all the trappings of space opera with alien creatures, planetary intrigues, and spaceships. But at its core, the book is also a superhero story.

That story, or the combination of the two stories, sprang from the head of the very talented Mike Baron in such a way that his co-conspirator in the Nexus stories, artist Steve Rude, stated that “Nexus was entirely Baron’s idea. He even came up with the lightning bolt for the costume.”

The pair were forced into developing Nexus when Capital Comics rejected a series called Encyclopaedias by saying it didn’t fit what they were looking for, which at the time were superhero titles. Over a drink, Baron came up with Nexus, which Capital scooped up and gave a three-issue black and white series to, followed by an ongoing color series to last 80 issues for Capital and 20 issues more with First Comics. In its run, the hybrid title garnered six Eisner Awards for everything from art to story to lettering.

Taking place 500 years in the future, Nexus is the superhero identity of Horatio Valdemar Helipop who receives phenomenal cosmic powers from an alien entity called the Merk. The price he must pay is kind of steep though, as the Merk demands that he kill a certain number of human mass murderers every “cycle” to maintain the powers. The Merk sends Nexus painful dreams that mirror the injuries subjected on others by his target until Nexus assassinates them. Helipop doesn’t like being the Merk’s pawn, but does so to maintain the Nexus powers so he can protect his homeworld.

As this issue opens, Nexus and his good friend Judah “The Hammer” Maccabee ended their “drinking man’s tour of the galaxy,” basically an intergalactic bar crawl, by wandering too close to a black hole. Thankfully they aren’t stretched out worse than candy in a dime store taffy machine before their ship finds an access window on the edge of a vast bowl-shaped world. So here they are sliding down the rim of a world traveling at an unbelievable speed. 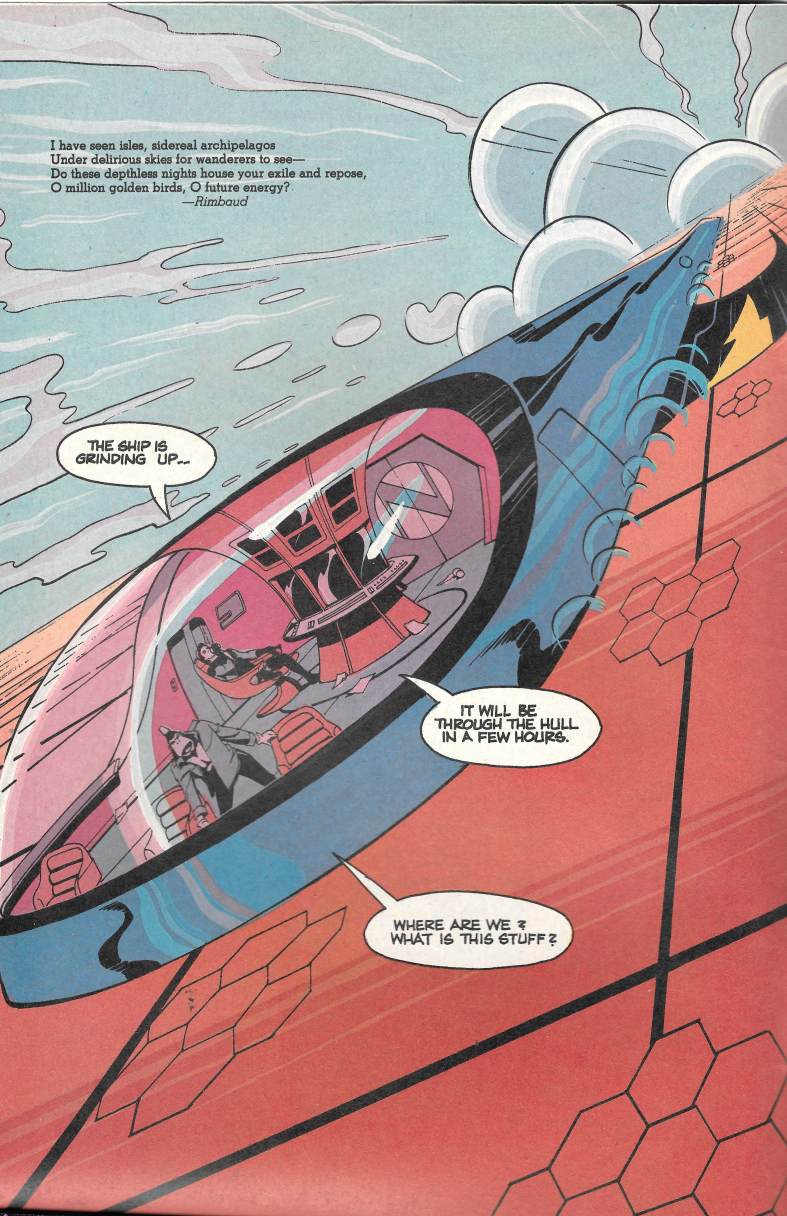 Nexus has lost his abilities of flight and fusion casting for some unknown reason, so the pair is stuck until they reach the bottom. How far to the bottom, guys? 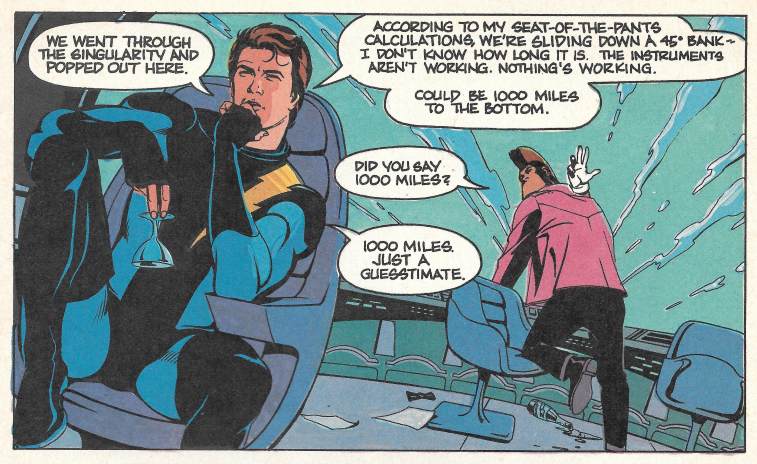 That’s quite a-ways. And to Judah, who started the whole tour because he was bored, it sounds like he’s not in for a very fun trip. 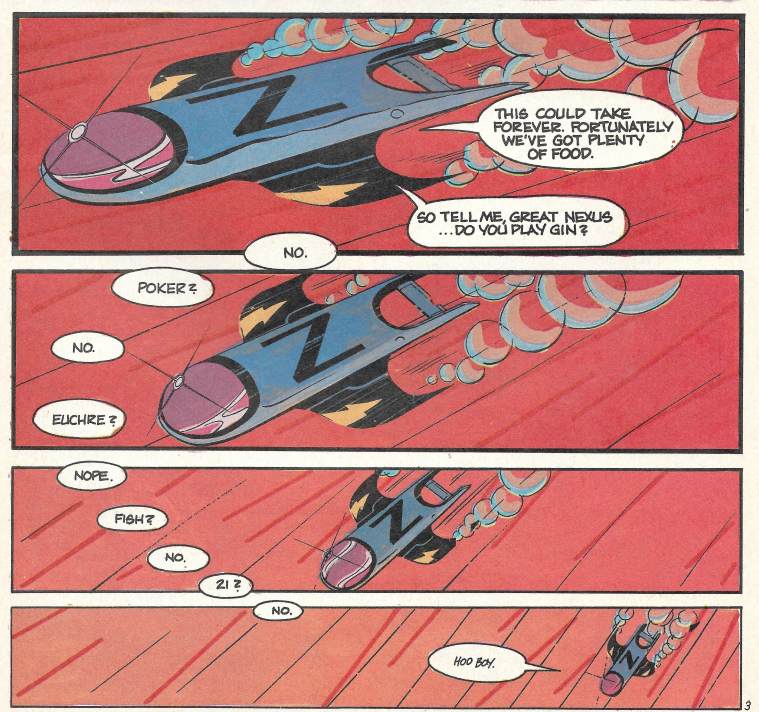 Meanwhile, back on Nexus’s homeworld of Ylum, Lhasa is working with a team of archeologists who are unearthing the place where Nexus got his powers. Not sure Lhasa’s intentions beyond the fact that she is driven to discover the source of Nexus’s abilities and she doesn’t want to be found out. 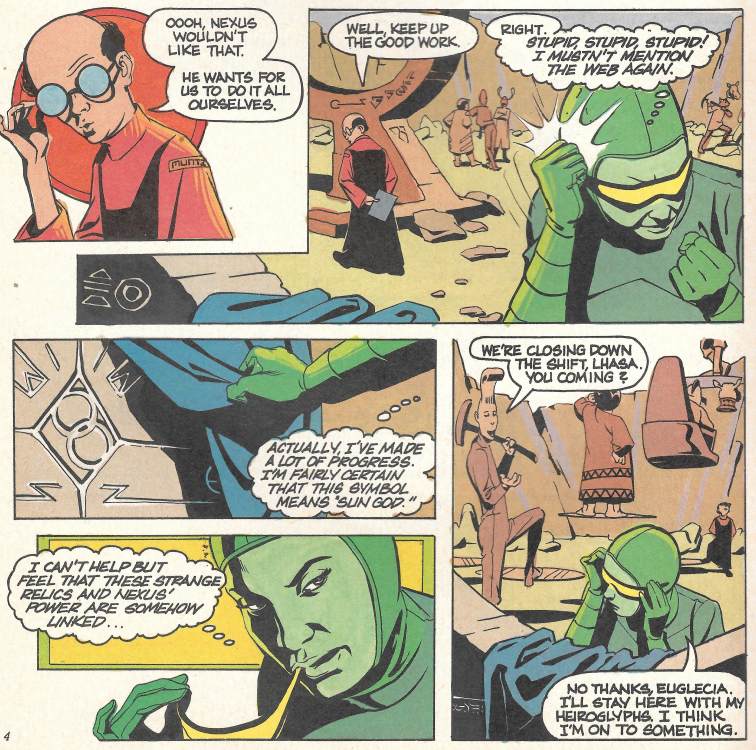 Is she a good guy or a bad guy?

The next bit where she discovers a pair of thieves stealing artifacts for themselves, doesn’t really clarify matters much beyond how great Steve Rude is with putting together great layouts. 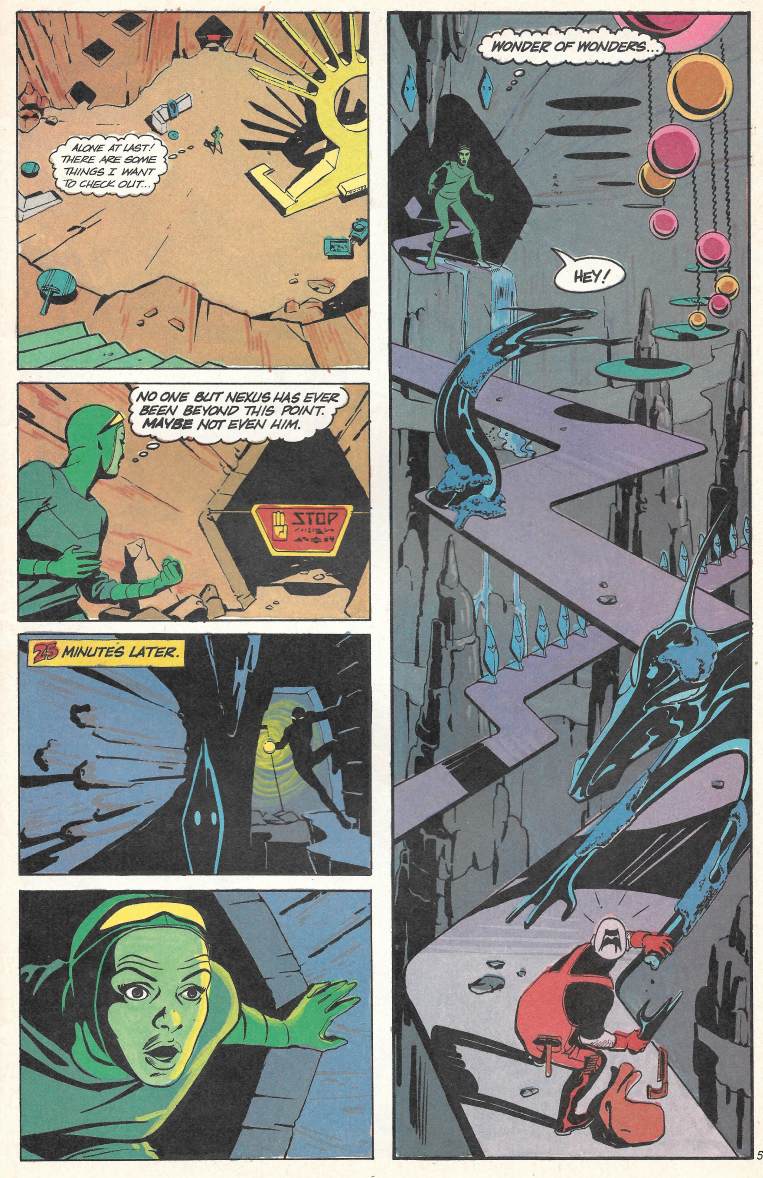 It’s a little Giffen, a little Ditko and a smidge of Alan Davis, all kind of rolled into one. I love clean art that shows depth and Rude gives that with every page. Easy to see why they won so many accolades. 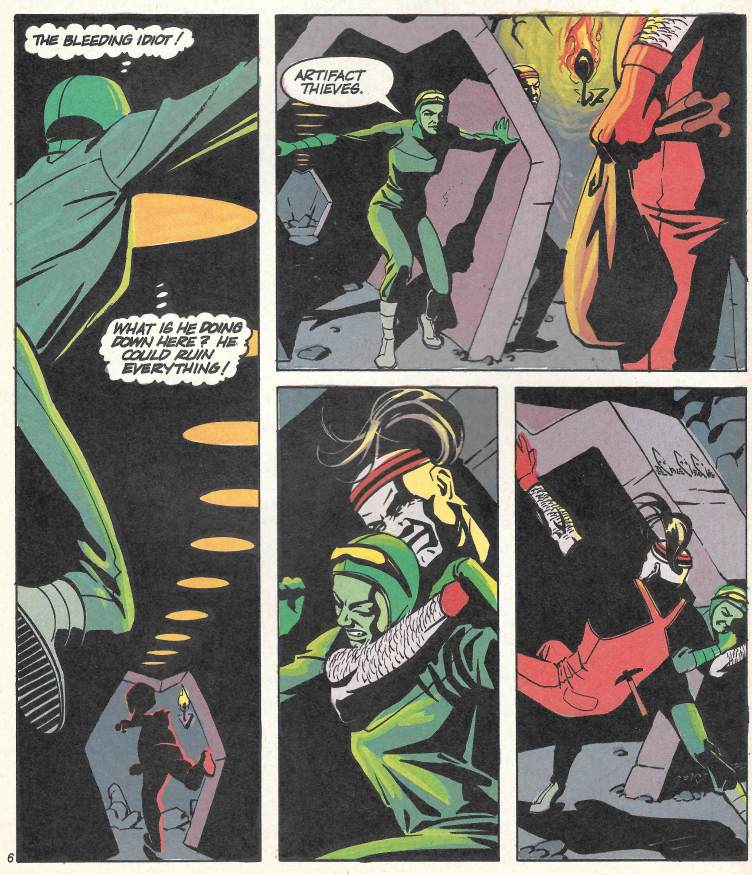 Lhasa proves to be no slouch in the fighting department, taking down not just one… 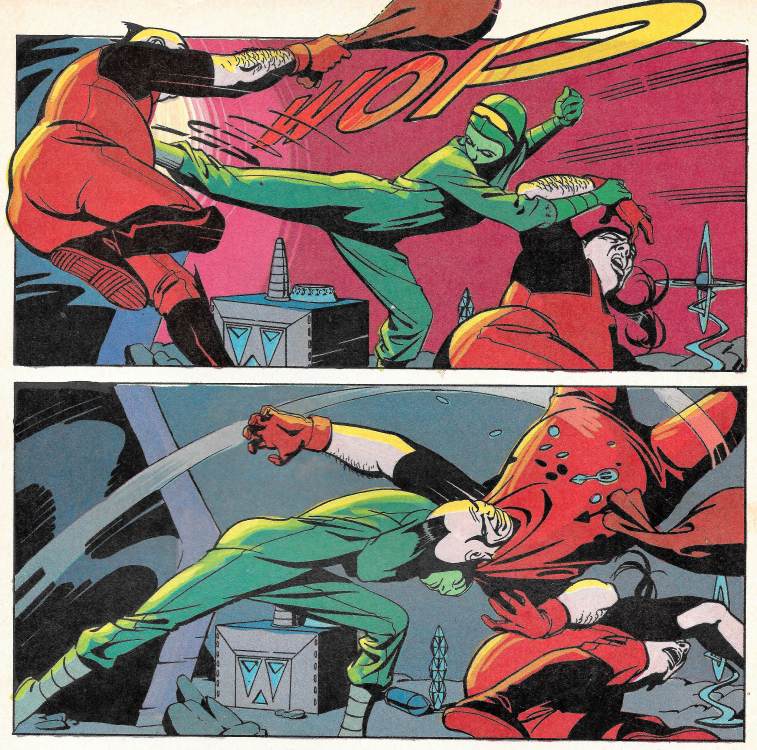 …but two thugs. They offer to cut her in, which she has no interest in. And unfortunately, she can’t let them leave alive… 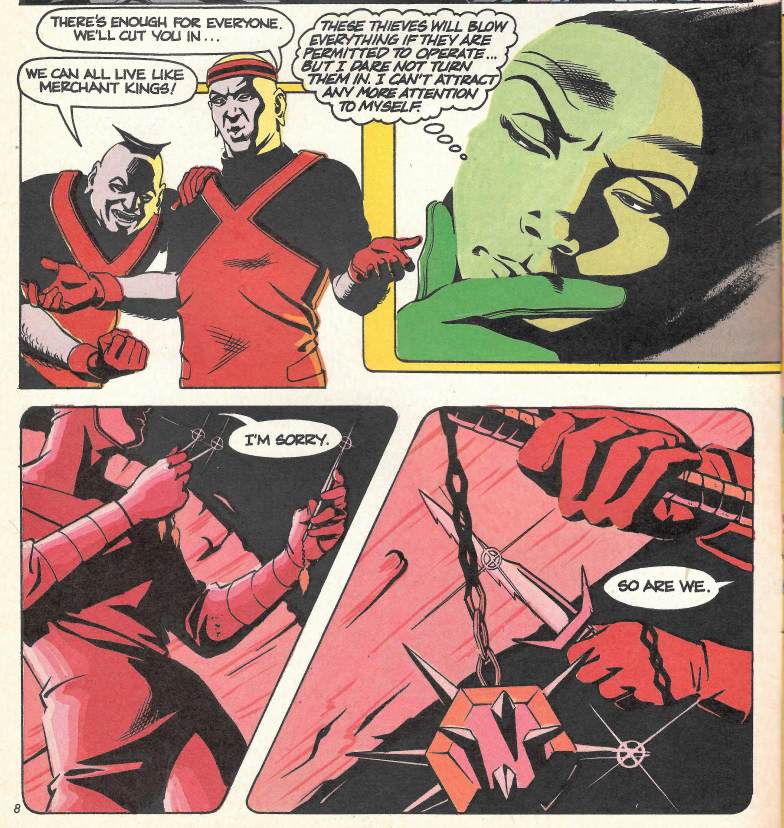 …so, probably a bad guy. Maybe. Jury still out.

We also get to spend a few pages with Jill and Sundra, two female pals of Nexus, taking out a solar sail ship. Again with the great visuals by Rude. 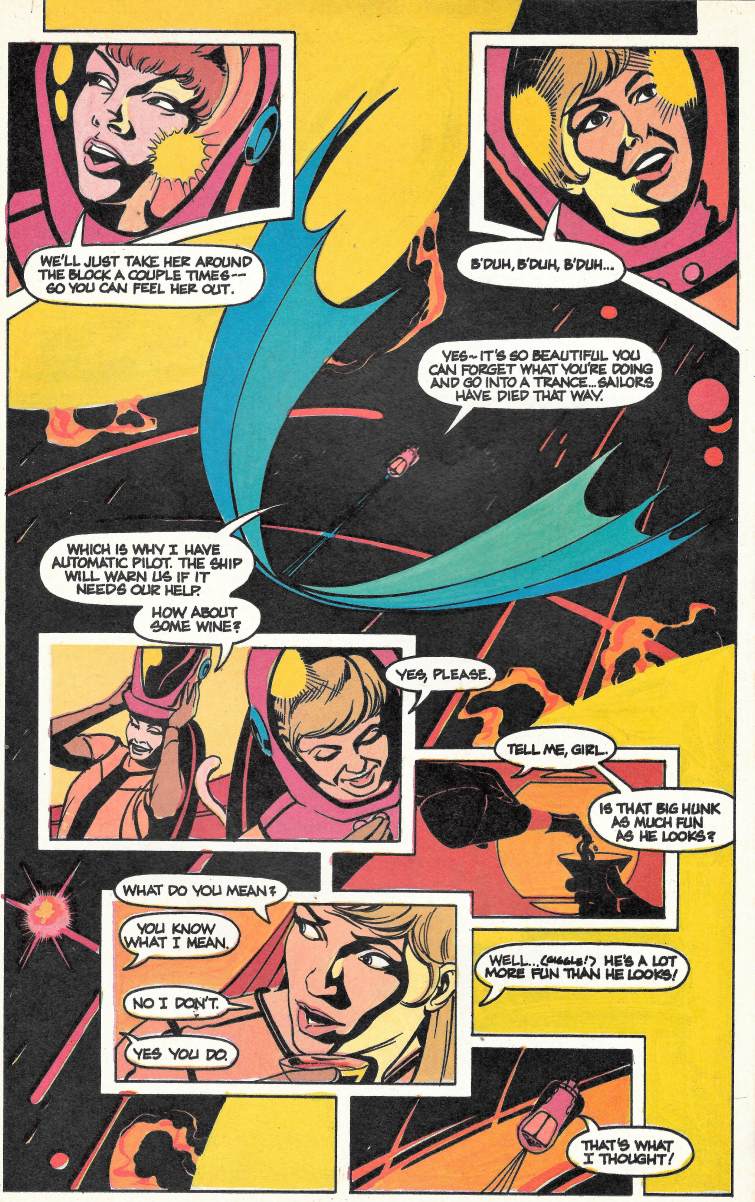 Impossible not to love the book at this point.

Meanwhile, Lhasa makes a discovery and gets discovered by someone she opts not to kill, so maybe not all bad. Still unsure. 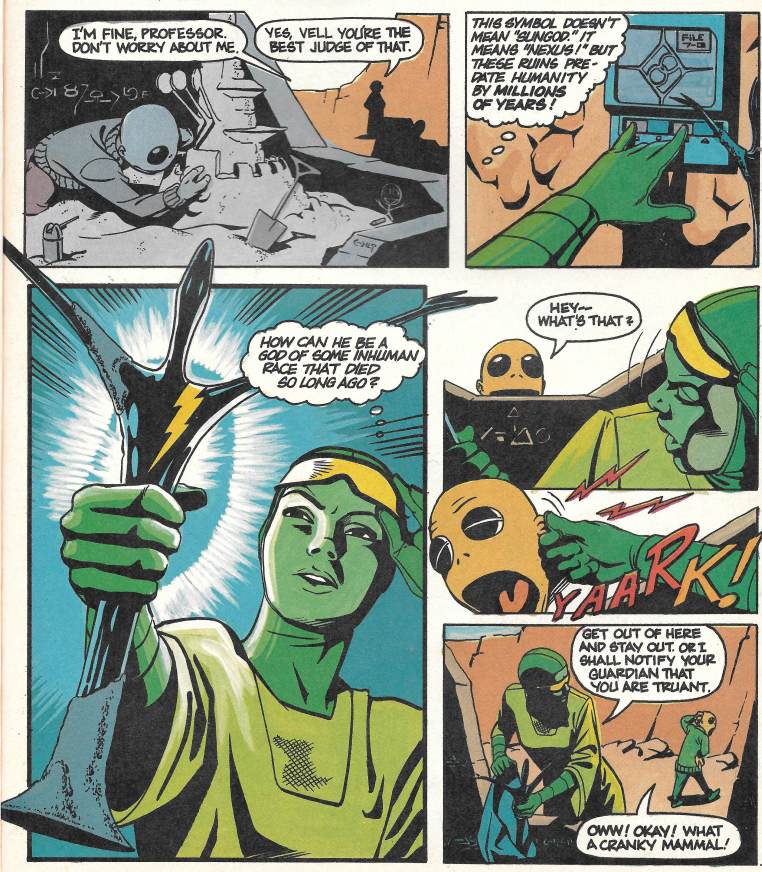 And turning back to Nexus, the ship is almost worn through, so the pair make for the roof to sit out the days or weeks it will take to either slide to a stop or their food runs out. 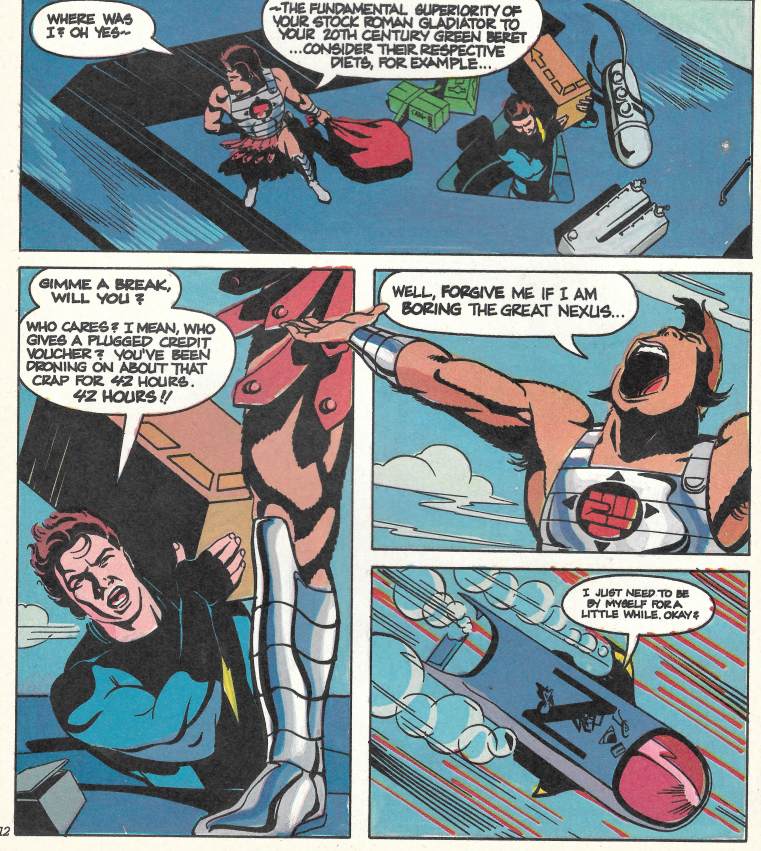 Appears they are getting on each other’s nerves a bit too. 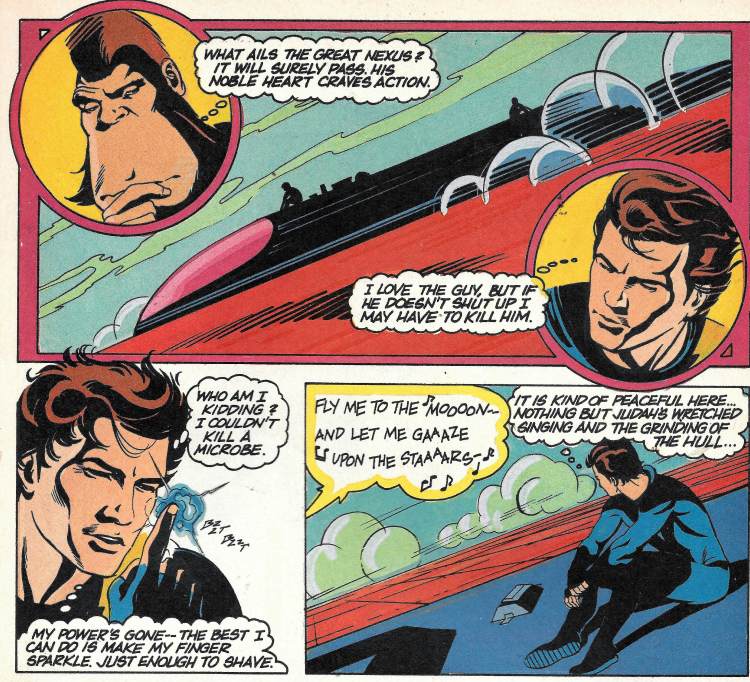 Nexus’s power is gone and while that might be a negative, he can’t help thinking about what that also means for the dreams and pains that plague him as the price of that power. 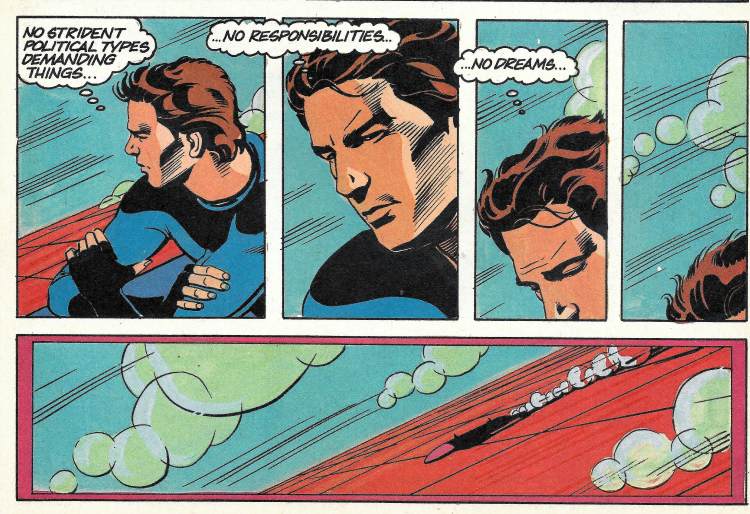 But just when everything seems to be going so well… 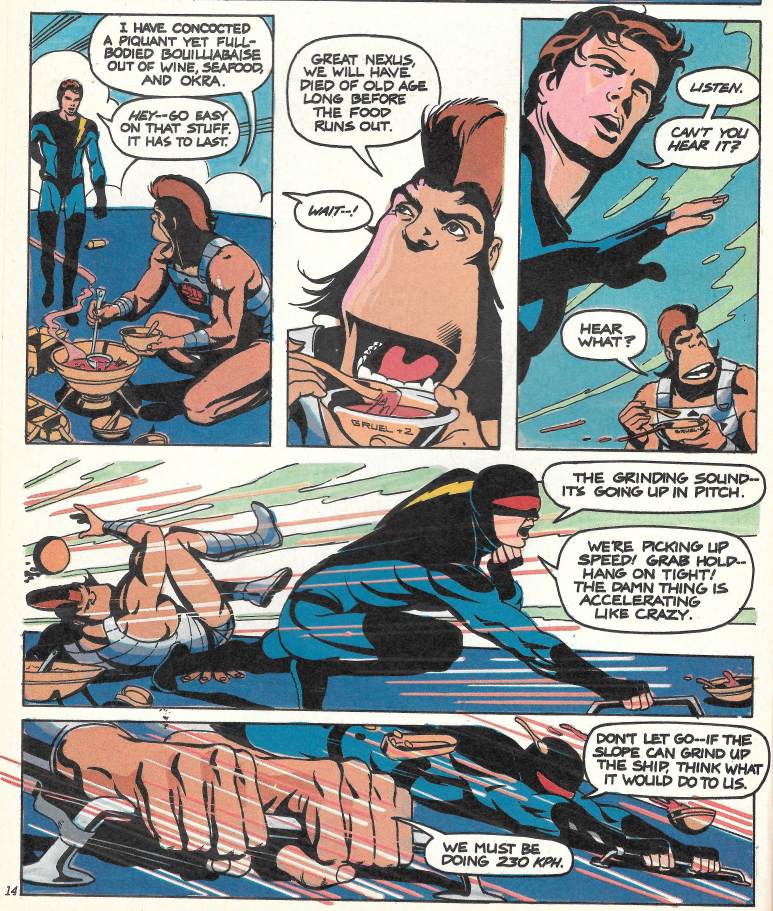 …the ship’s accelerations increase and the two have to hang on for their lives.

However, that just means the trip is almost over as the pair finally slide into the land at the center of this bowl. A land that definitely looks inhabited. Intriguingly inhabited. 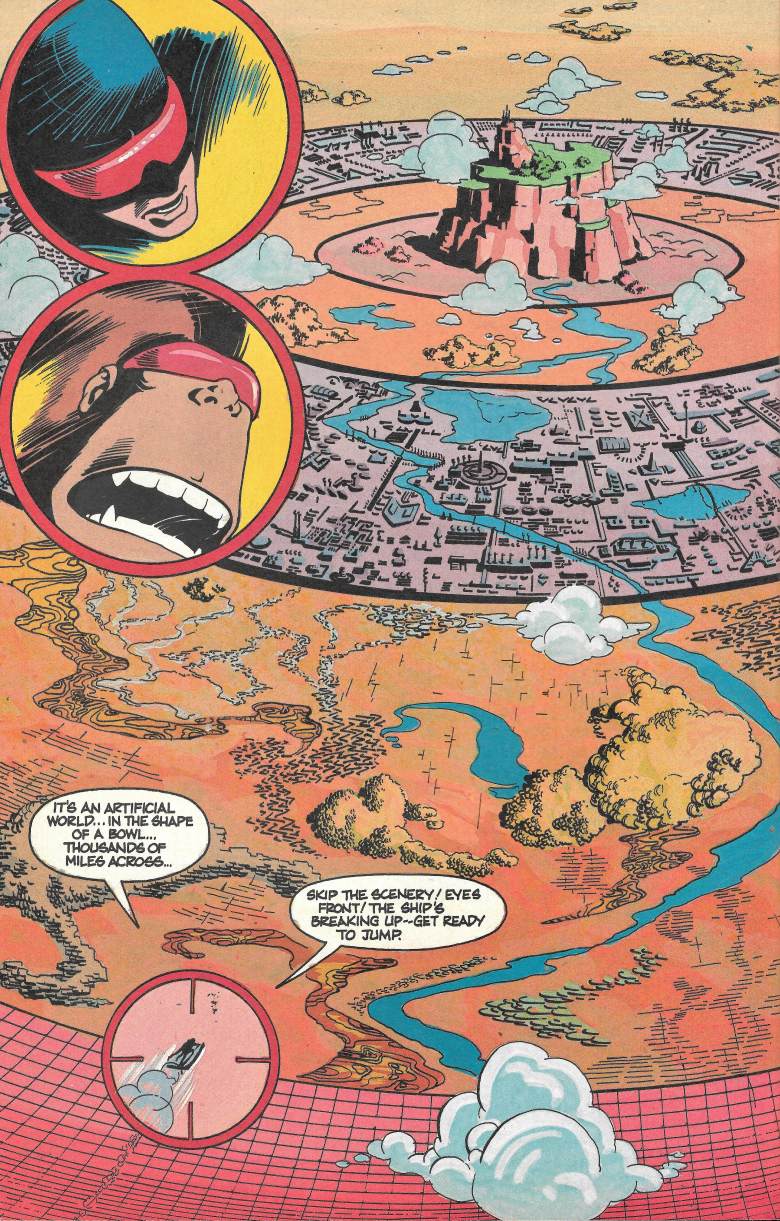 Leaping free of the craft means they have no choice but to hoof it the rest of the way to whatever civilization awaits…while Judah illuminates all the things they might have to worry about. 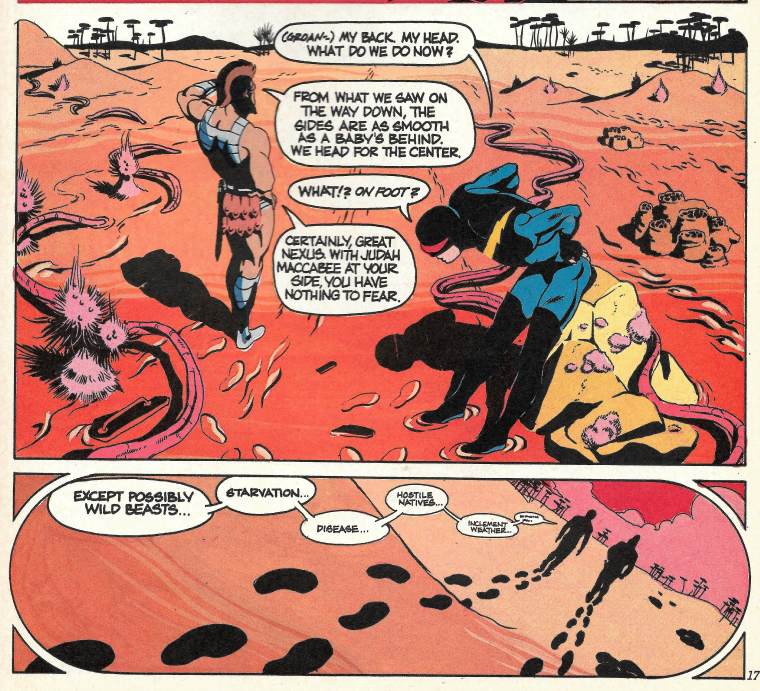 For all his annoying habits, though, Judah is pretty handy. 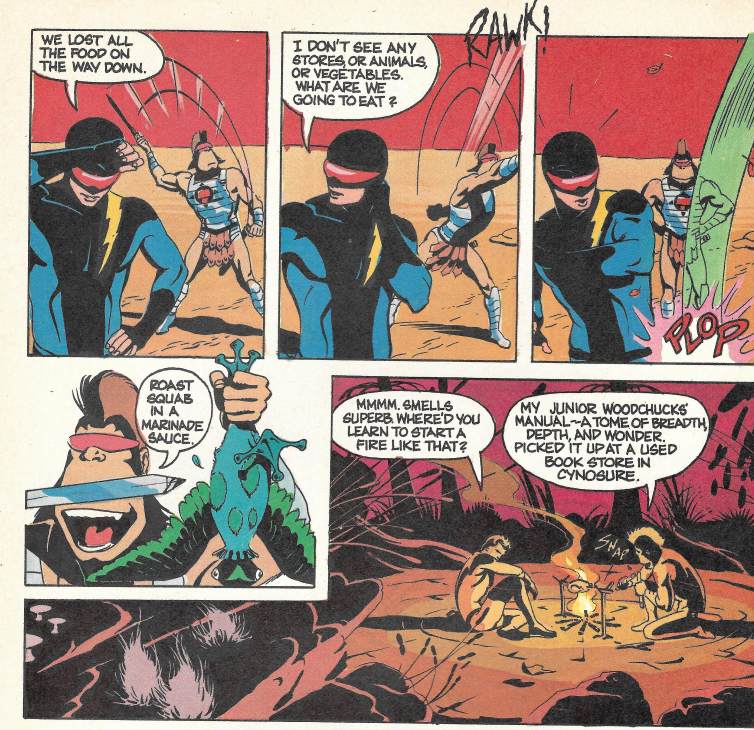 And not just in the hunting and dressing game tasks. He also is keen enough to know when he’s being… 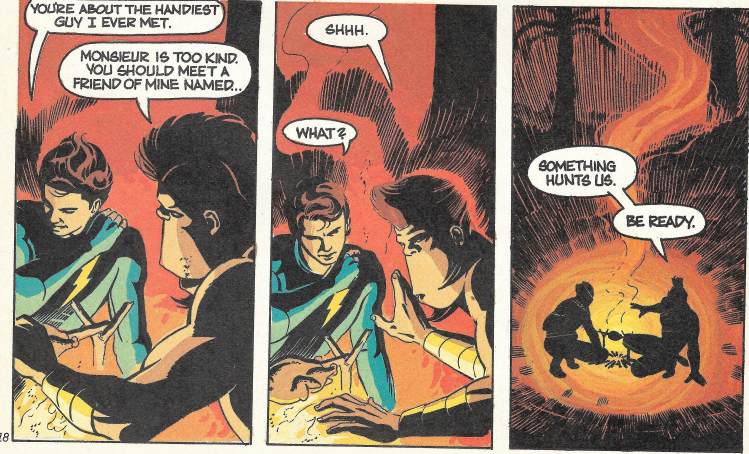 …hunted by flying space octopi. Judah is fine at splatting them all over the place too. While Nexus…? 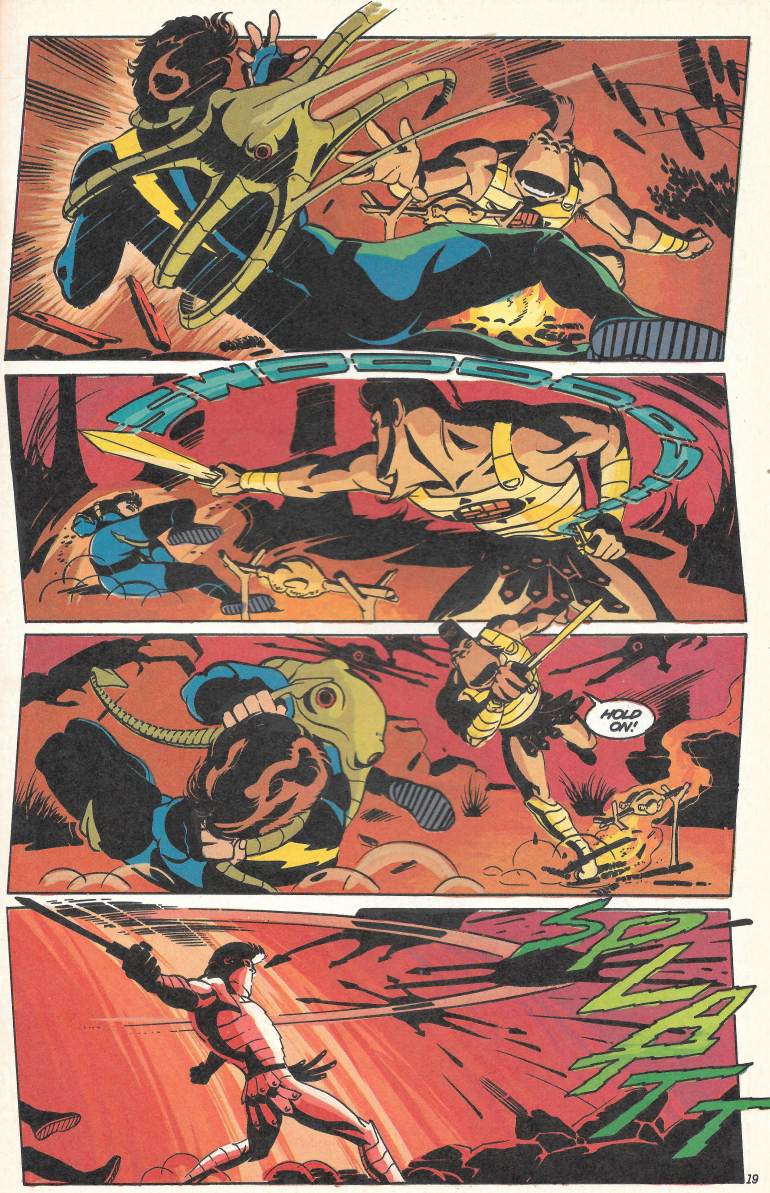 …has to settle for using another tactic, given he is without his fusion powers. It still works out nicely though. 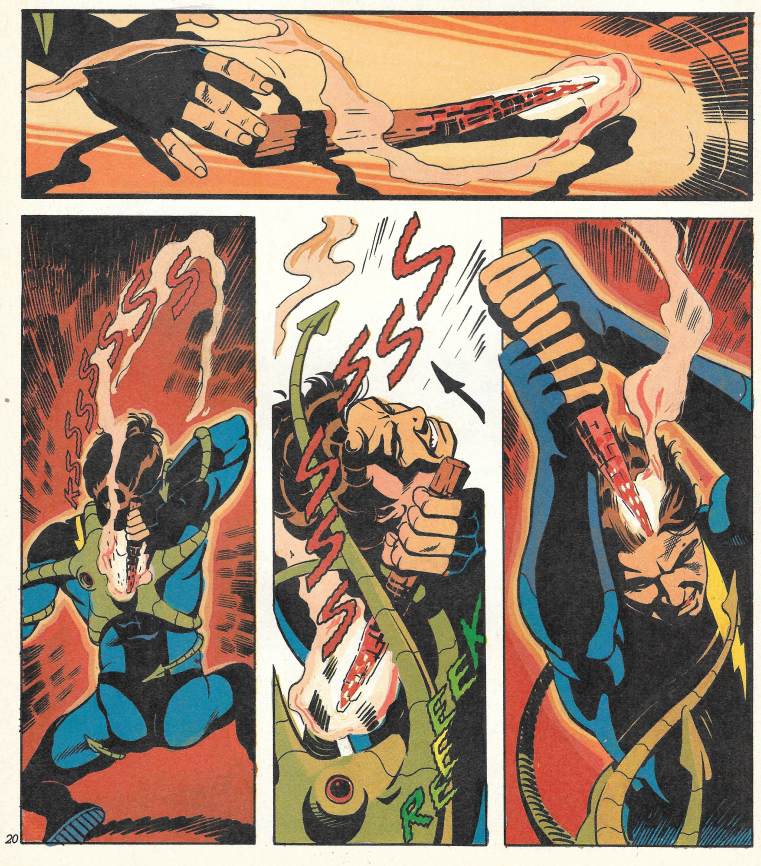 And while Judah checks to see if Nexus is okay, an odd person begins color commentary from atop a nearby tree. 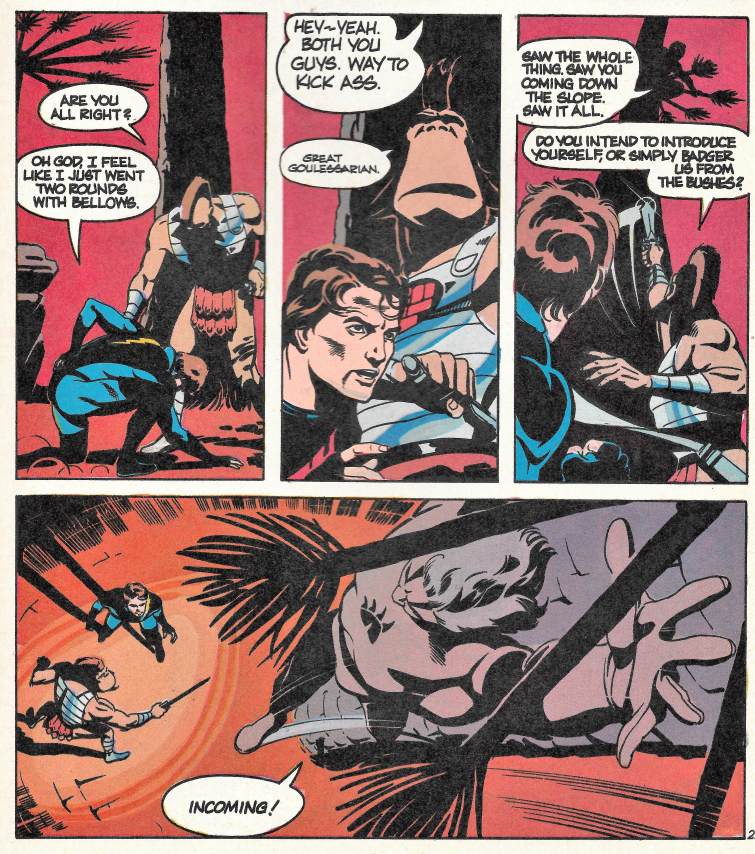 Watch what you say about someone Badgering you, Judah. Or you may get just that. 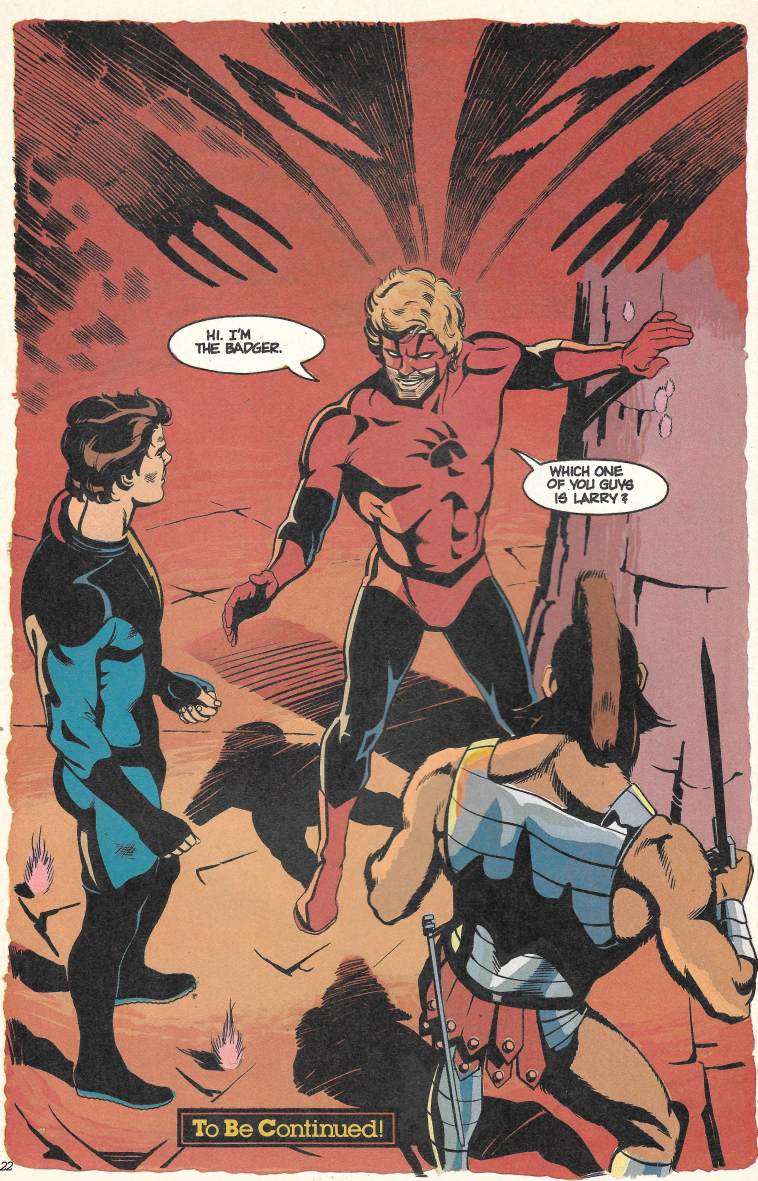 And that is the historic first meeting of Baron’s future space-man superhero Nexus and his present-day crazy-man superhero Badger. This storyline would last the next two issues and I’m really saddened the Crapbox only spat out this one. Because I’d like to see how this goes, frankly.

The book also had a neat little bit of universe-building as a two page backup look at how the book interprets the physics of black holes. I don’t know how accurate this is, but it is a fun bit of fluff to include at the back. 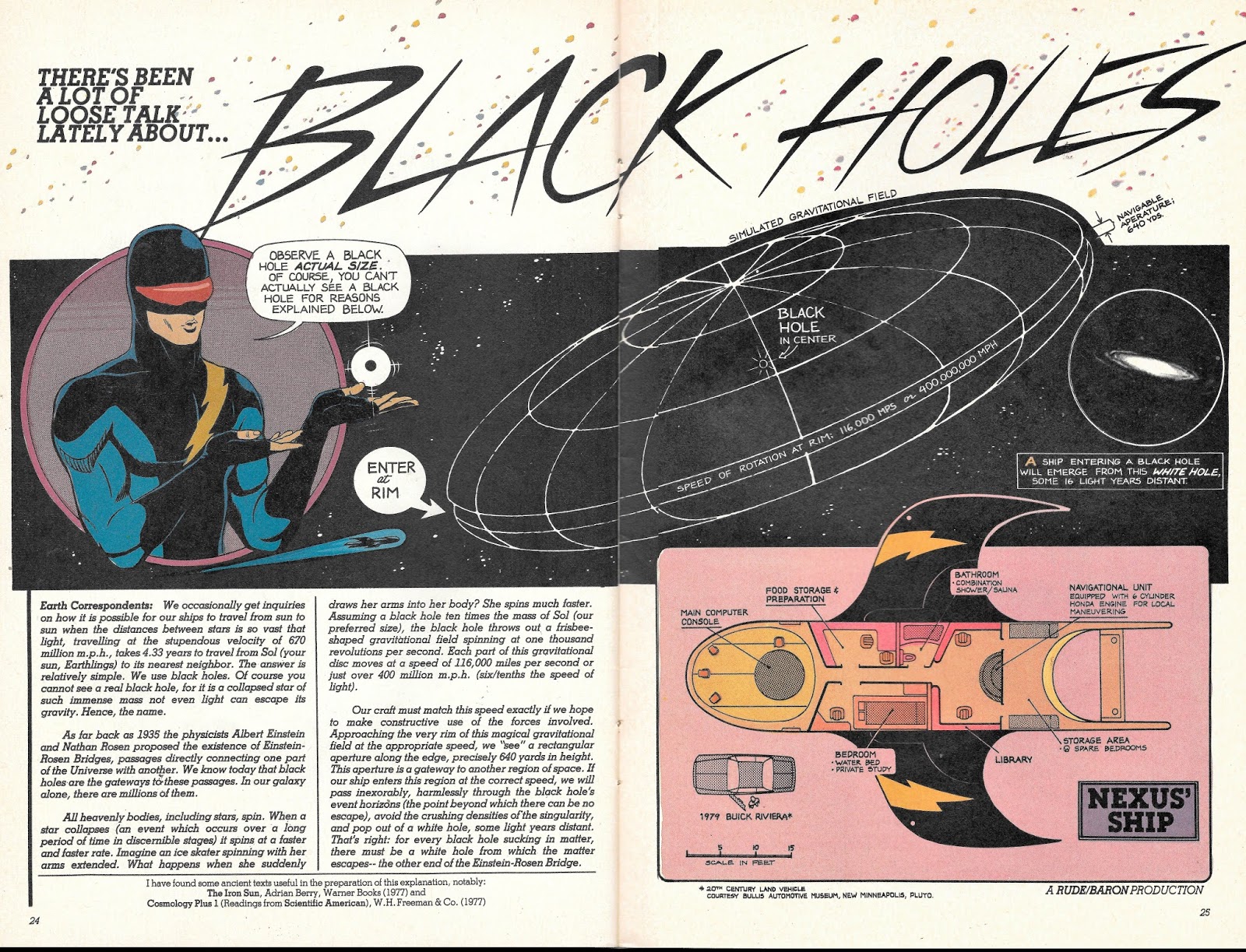 I enjoyed the issue. Baron usually strays from typical storylines and Nexus gives him a wide berth to do that. Rude’s art is amazing, with each panel being more vivid and Flash Gordon-like than I expected. Look for these when you are out. They are worth the pick up.

Posted by SonOfCthulhu at 2:01 AM