Captain Venture and the Land Beneath the Sea #1 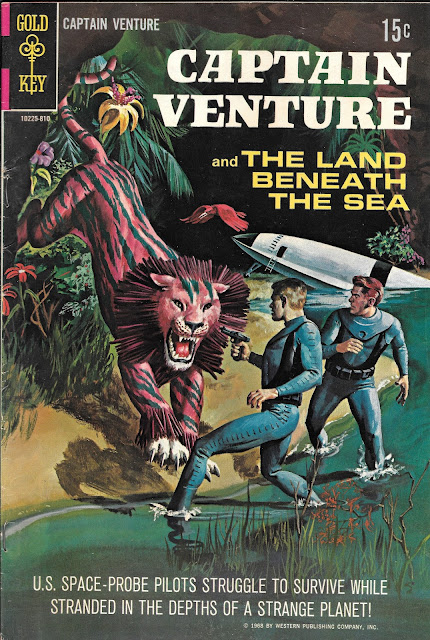 This one has it all

This title originally saw print as a backup feature from the Gold Key book Space Family Robinson. Beginning in issue 6, it would run through the next 30 issues to complete on novel-length story. There is some dispute as to who wrote the piece, as various places cite Del Connell, the original writer and editor of Space Family Robinson, and others label it as Gaylord Du Bois, who picked up writing the book as of issue number 8.

Whichever of the two men holds the responsibility for writing this series, they certainly packed it with nearly every science-fiction reference the 50’s could churn out. And I’ve only read the first half of the story of Captain Venture, there being a second issue that finishes off this unusual tale.

Before I kick this all off, I’m going to pay a HUGE debt to Pappy’s Golden Age Blogzine, who had scans of this issue that made mine look like…well, like crap. Seems Gold Key, in their infinite wisdom, stapled the book before the crease of the fold. Every attempt I made at scanning the pages threatened to either pop those staples (always a Crapbox review hazard) or create blurry scans down one side of the book. I gave it my all and scanned the entire thing with these nasty, unfocused pages as a result. Then started my research into the title, and came across Pappy’s site, which featured wonderful recolored scans that I borrowed to post this (with full credit to Pappy, whose site is now among my most treasured.) Please check out his great classic stuff at this LINK HERE!

Let’s jump right in to the action and remember, this was 1968. A single page equals about six issues of today’s comics. Get your jogging shoes on as we run alongside this thing.

We begin with Captain Rex Venture in the future time of “sometime after 2,000 A.D.” as his magnetic force field ship rockets toward Star Beta 52. He and Engineer Scotty Mackay explore the solar system around Beta 52 and find a planet that looks a bit like Earth. When suddenly… 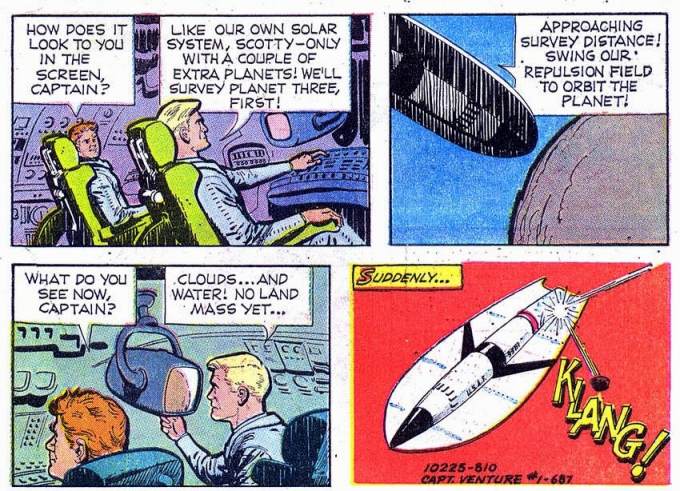 …And that little collision causes their sleek spacecraft to fall into plant three’s sea. But, before crashing Rex notices the island near where they are falling appears to be artificial. 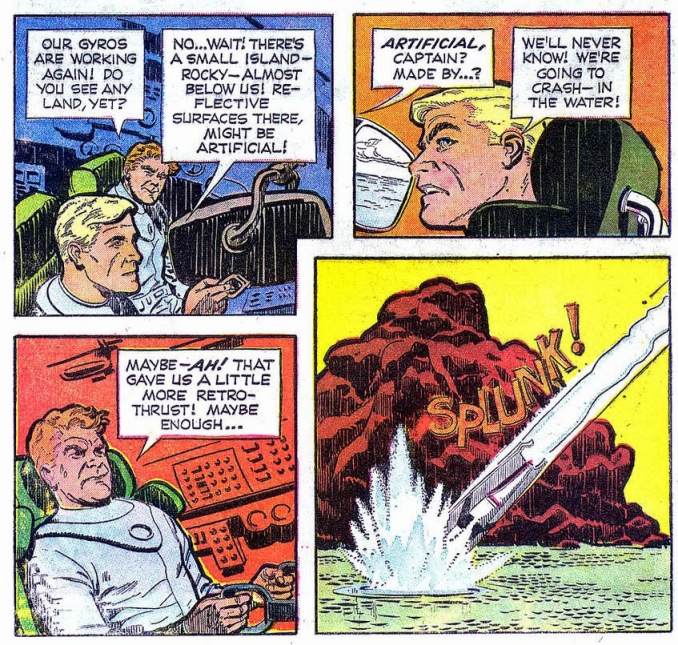 They decent helplessly into the murky depths only to arrive at an odd undersea cavern brimming with alien life. This sounds promising, eh? 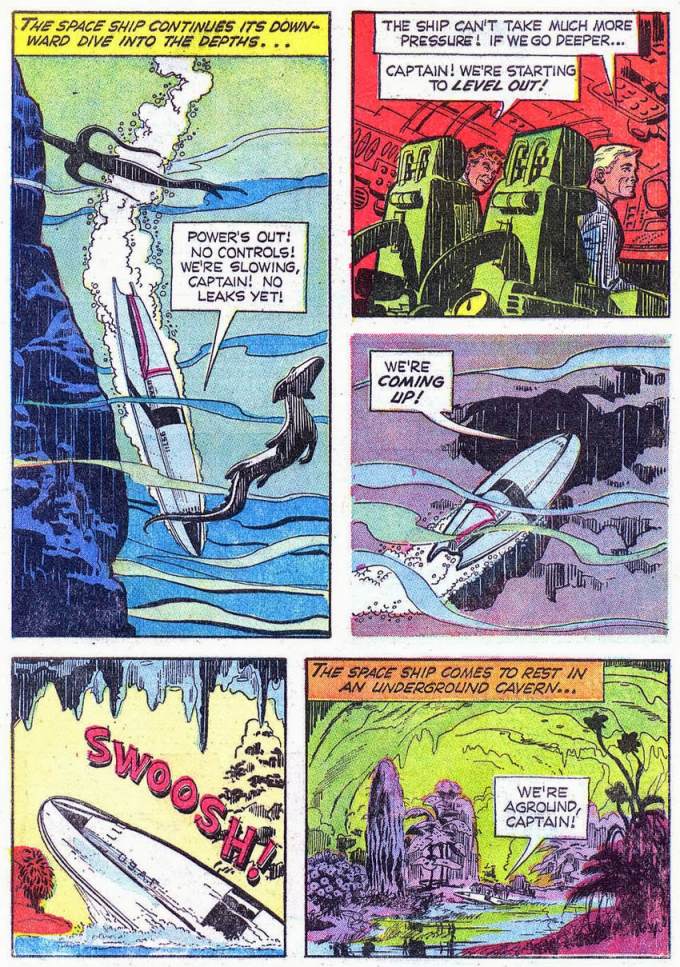 However, not only is the huge underwater land artificial, so is the lighting that makes it habitable. Scotty makes the deduction that they’ve found intelligent alien life, but Rex warns him to be cautious. 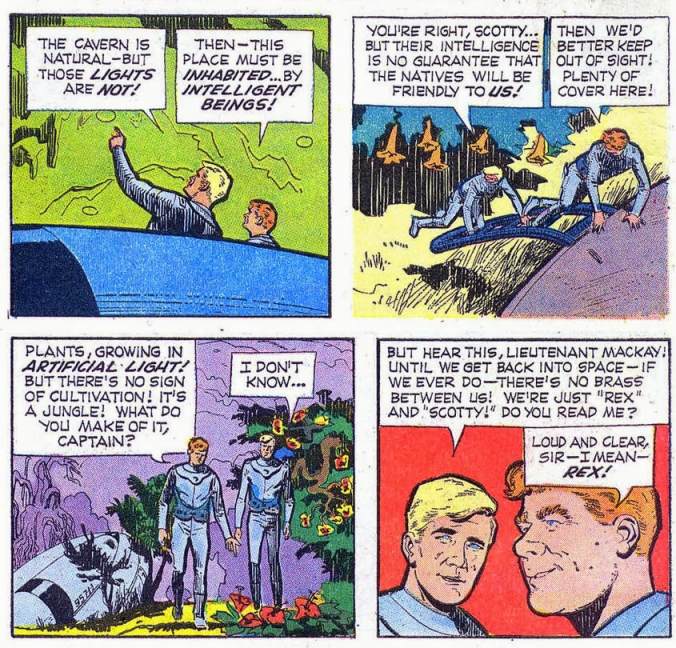 They spend the next few days assessing the damage to their ship and attempting to make repairs to the “space radio.” Ha! Space radio. 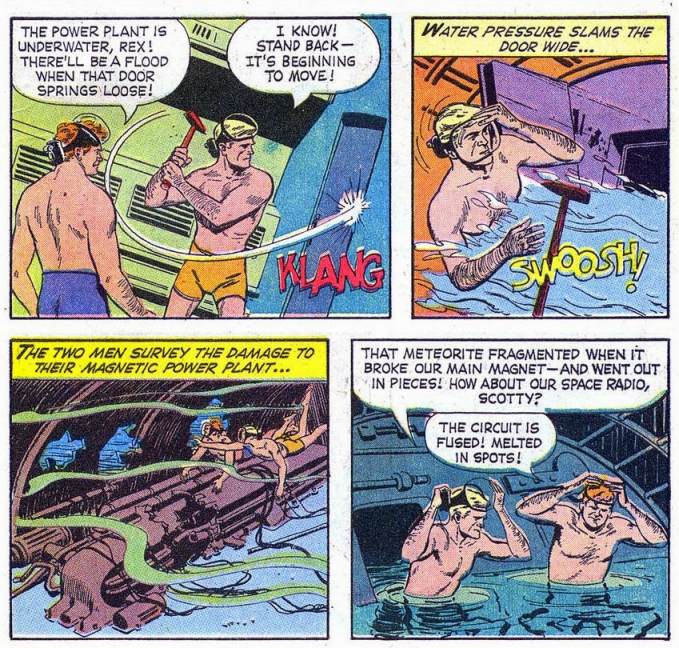 They determine it will take a week at least to get it working again, but Rex worries that the inhabitants of the caves might find them first. And not knowing if they are hostile to alien life means that he wants to find them first and discover their intentions. They have neat levitation belts and ray guns with can cut through things. Quickly they use a laser blast to hide the ship. 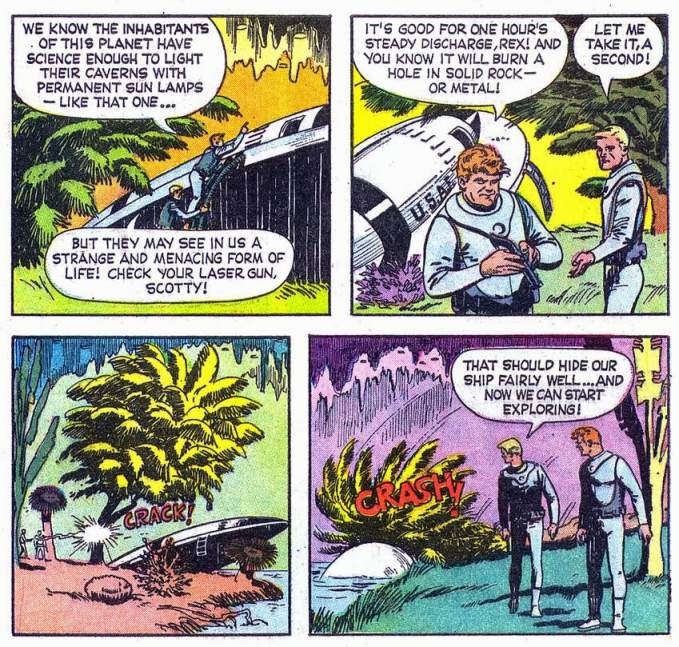 Suddenly a group of figures burst through the foliage from an adjacent cavern. These primitive humanoid cave people appear to be pursued by beings firing ray blasts at them. 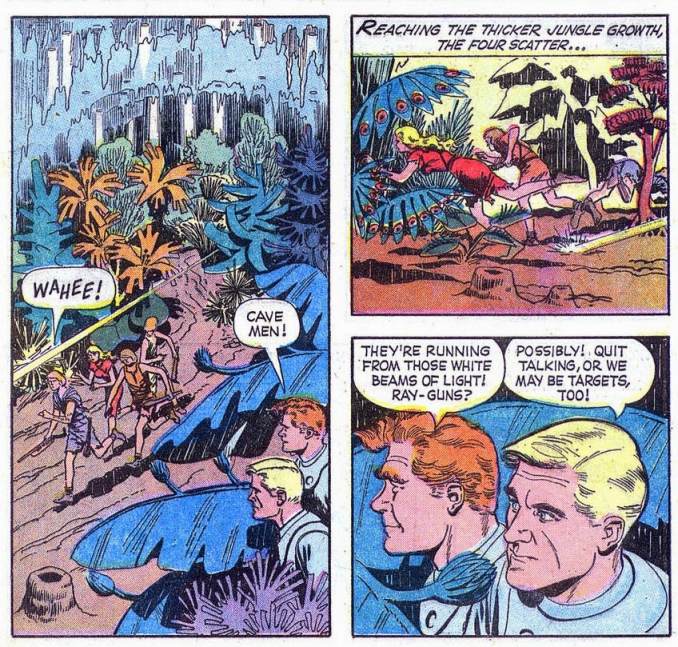 One of the cave people fires back at their pursers but is zapped in return. Our hunters arrive looking like an advanced society who speak using telepathy and wear stylish space capes. Note that advanced beings in 50’s sci-fi typically were the heavies while primitive cultures were shown to be not just underdogs, but also morally and spiritually superior. It’s as if we were afraid all these advances in technology would some how be at a cost to our human soul. Maybe they were right? 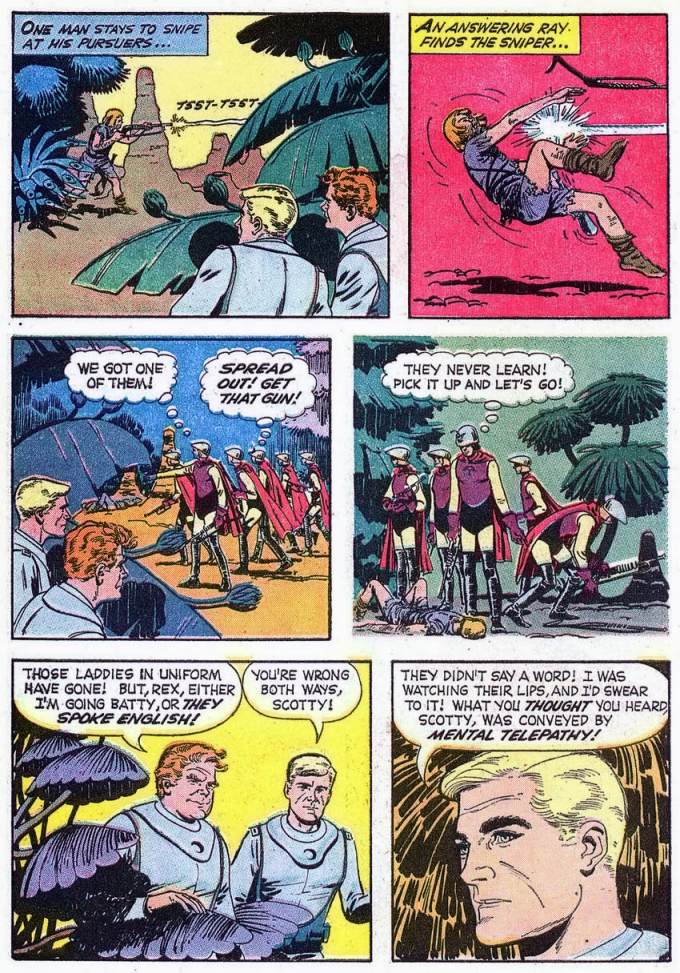 The hunters break off after reclaiming their gun and don’t further molest the caveman they downed, meaning in my mind that they can’t be all bad. They don’t detect Rex and Scotty either. As they mull over their options, the caveman awakens and moves to strike Scotty with a branch. 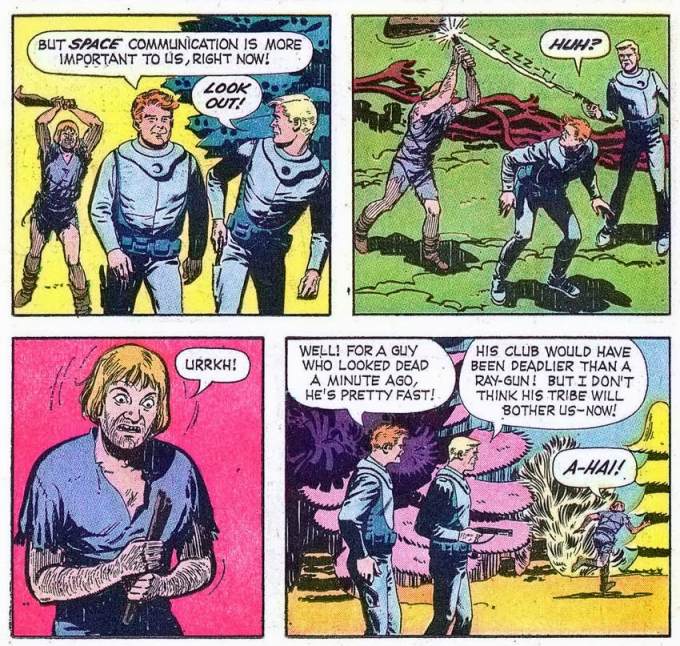 Rex scares him off with a well-timed laser blast.

As the pair retires back to their spaceship to confer on their findings, Rex has the idea of rebuilding the radio with new parts. Scotty is game, but states he needs six ounces of Quintillium metal to make that happen. So the pair sets off for the advanced beings city to find some, following a monorail car track they find leading into the other cavern.

They make their way following the trail, while avoiding some odd “horse-bear” things, before encountering the sprawling super-science city of the telepathic aliens. 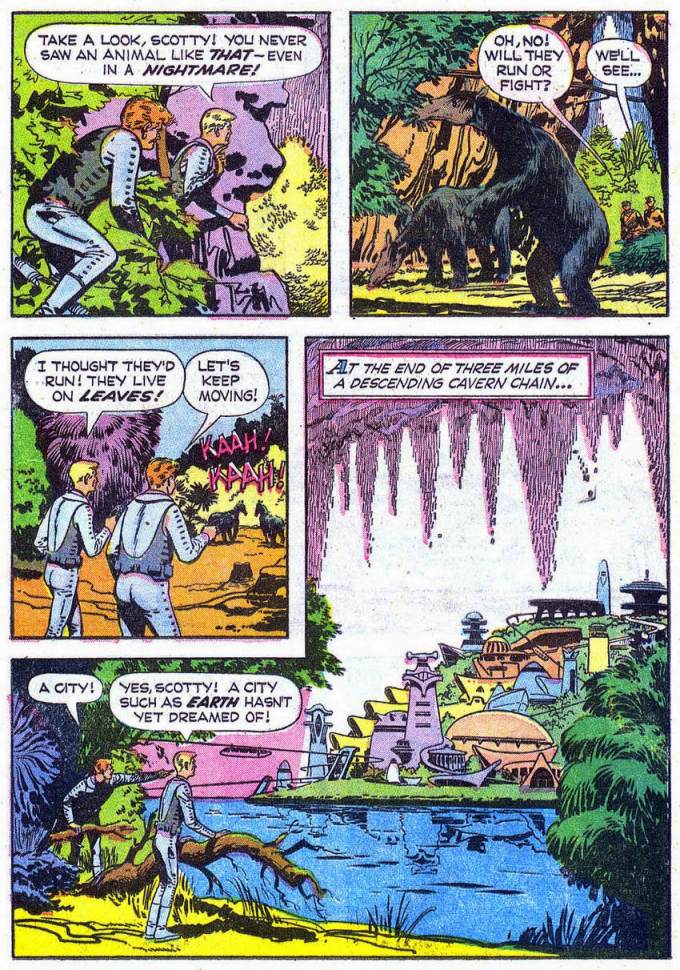 But the alien’s civil defenses are no match for Rex and Scotty’s log-floating technology. They would feel funny though, if logs on this planet sank instead of floated though. What they find when they cross is that even alien societies have a glass ceiling. 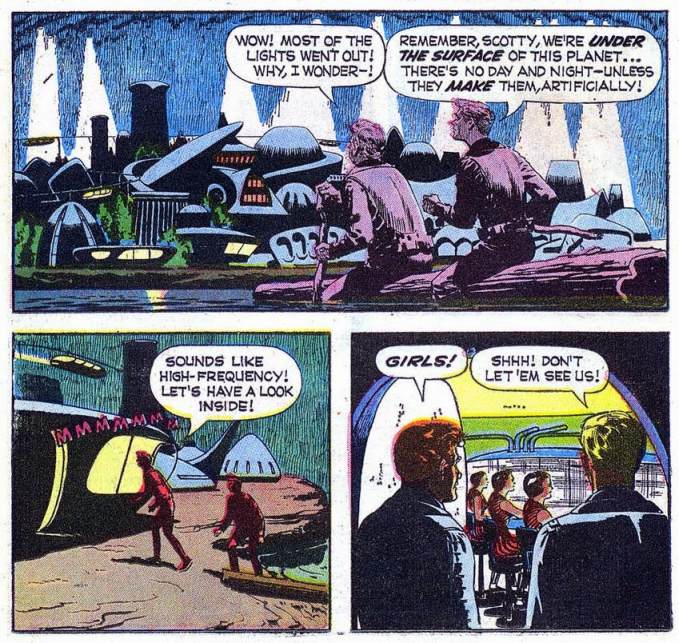 The girls run out screaming at the sight of two men without space capes. I mean, really! The nerve of those two to dress so disrespectfully. Scotty notes that they use Quintillium wire, but guards show up, loaded for bear. Or maybe horse-bear, for all I know. 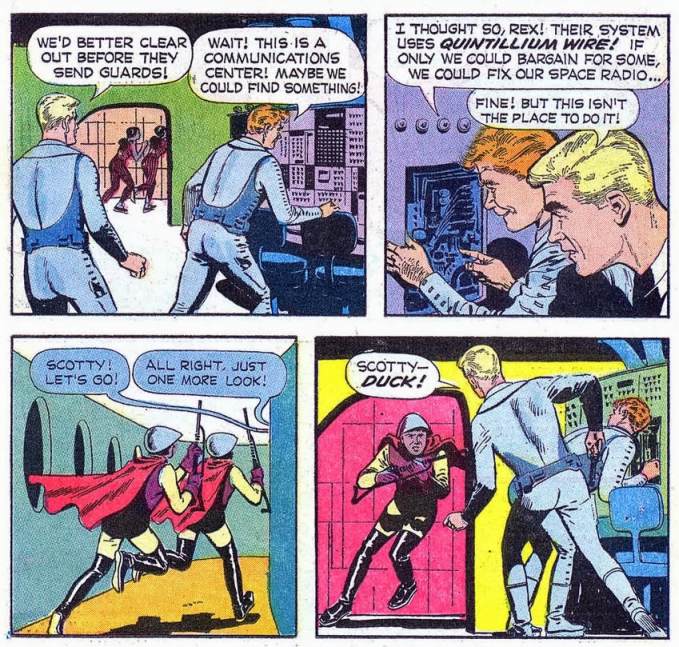 They zap the one guard’s gun and punch the both of them unconscious. Note at no time to the pair try to use the alien’s mental telepathy to communicate with them. Because we come in peace and all that. Then they nab the alien’s ray gun (which we’ve already seen them chase after folk for taking and wouldn’t it have been better to take the Quintillium wire? But whatev’s) and amscray into the water. 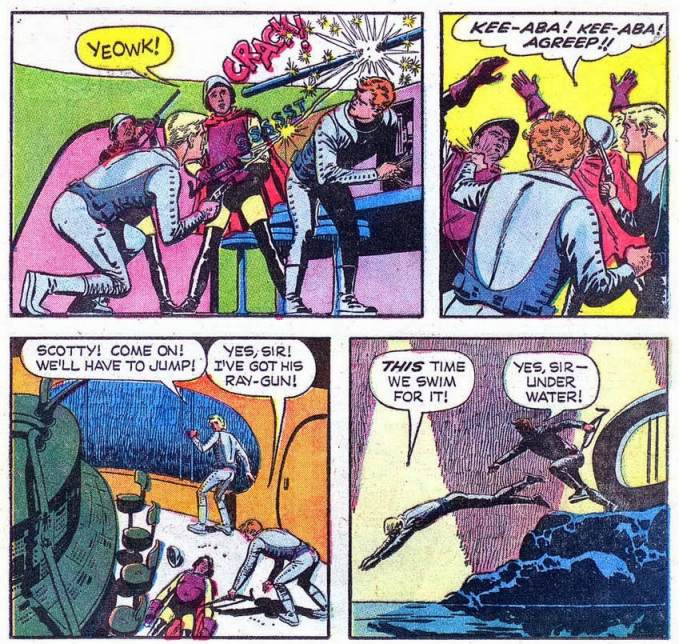 On the way back to the cavern, they encounter many monorails carrying troops looking for them. This forces them into unfamiliar caverns to hide from the parties out searching for them. Luckily, just as they become cornered by a party looking for their paralysis gun, a blonde telepathic girl appears and leads them through a secret passage. Which is good, because the gun they were so hot to nab got wet and now won’t work. 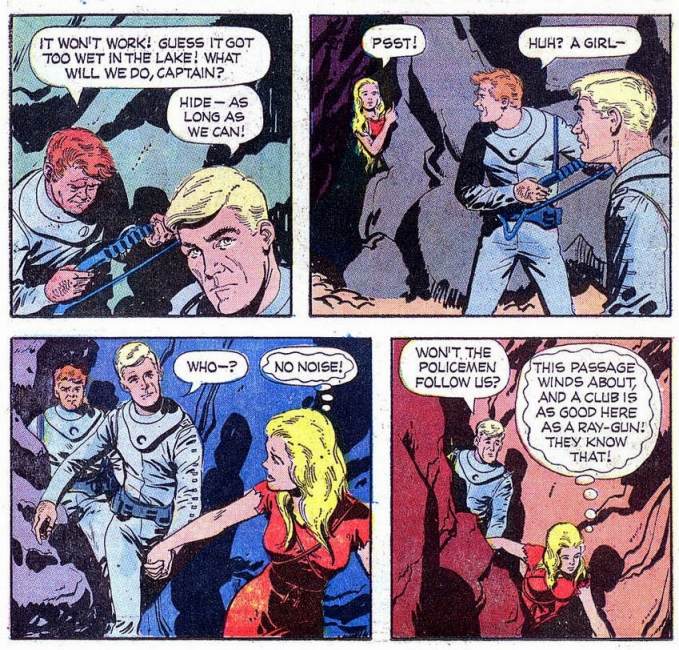 The girl tells them her name is Jana and she believed them to be outcasts like herself and the other cave people. Jana speaks of their pursuers who call themselves Kroppies. They meet Rompol, the head of the cave people’s clan too. 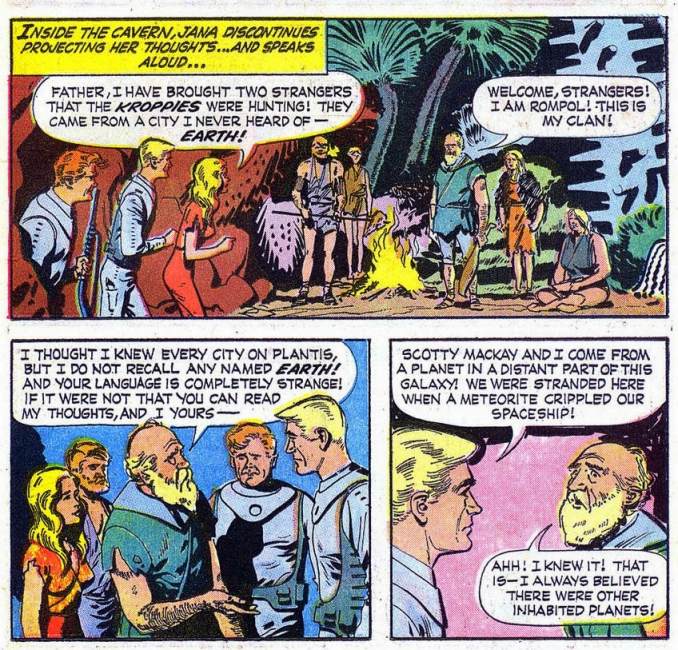 After a brief introduction about where they come from, Rex quizzes the natives on why they don’t look like the Kroppies. Although they spend some time at this impromptu meet-and-greet, at no time do they get an explanation as to why the Kroppies are hunting these folk. 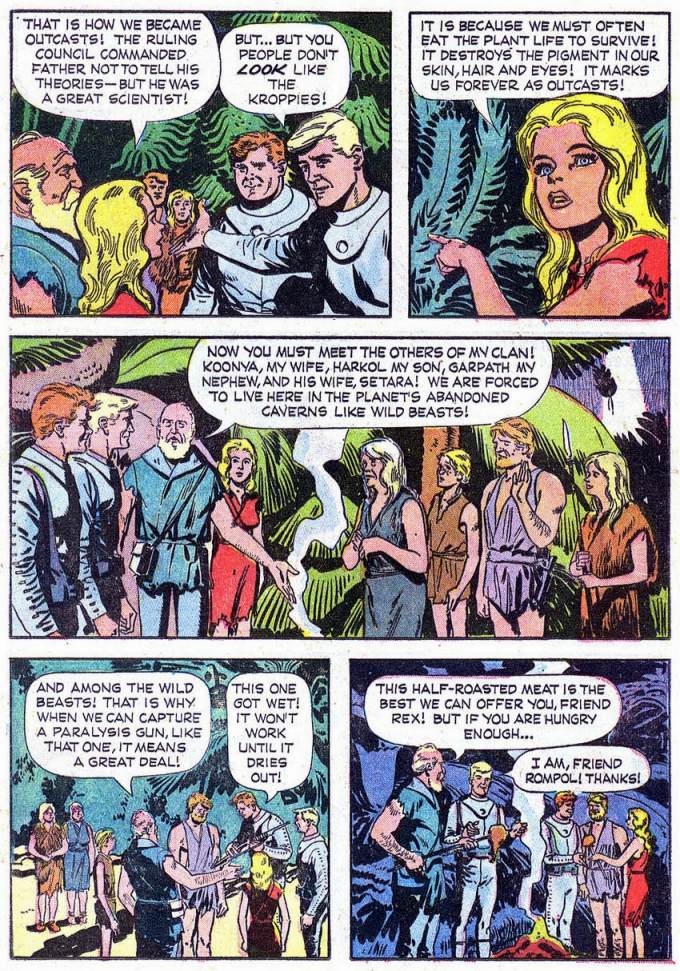 That’s about the time that a weird zebra-lion called a Greeth decides to attach, which ends up being “on the menu” in a very quick burst of laser gun blasting. 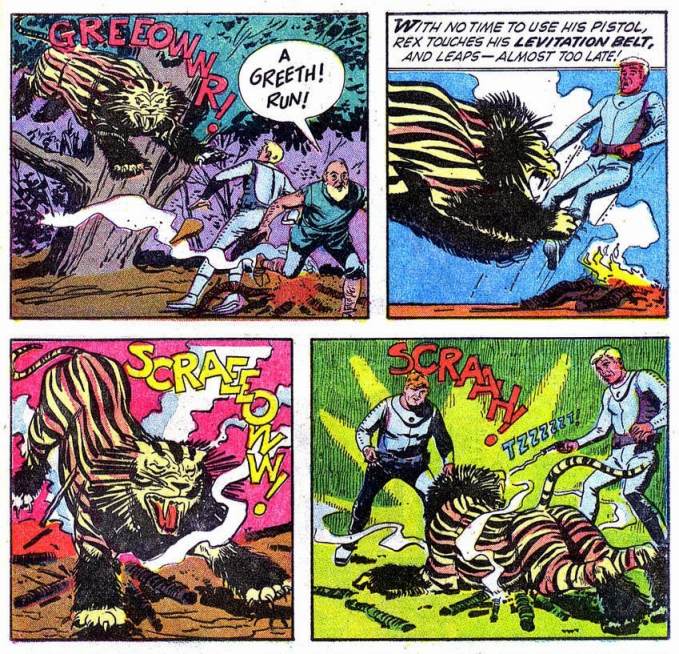 The creature’s attack scares off the natives and the pair is forced to find their way back to their ship on their own. 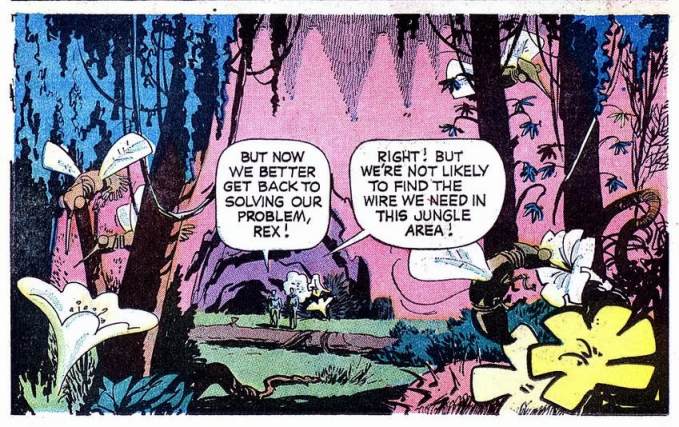 While wandering they encounter another outcast, this one a very Yoda-like hermit sage named Pa-Ark. 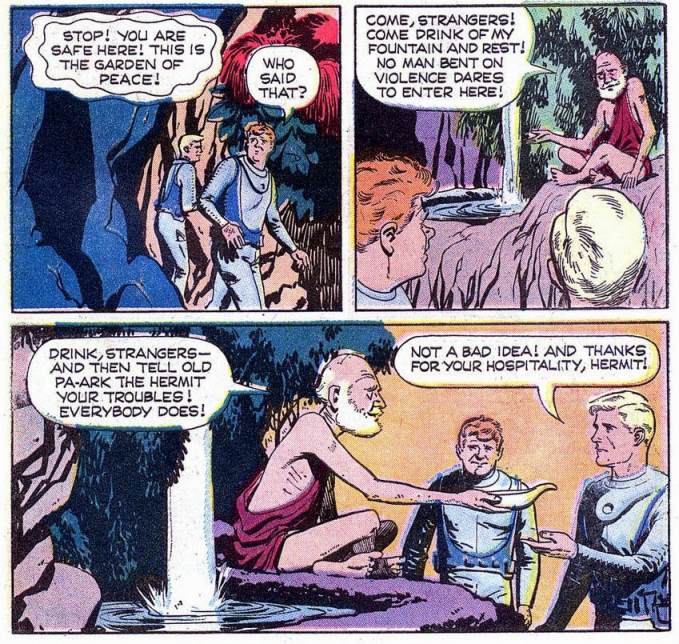 They tell the old coot their troubles, and he agrees to help them find their metal. 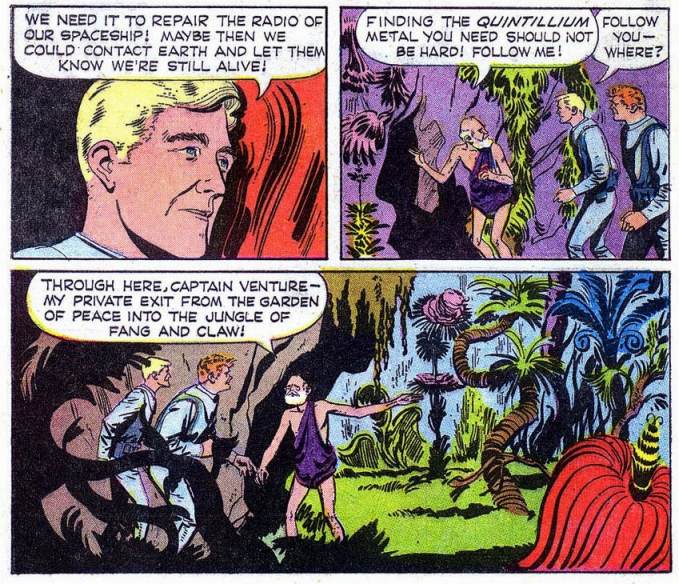 Pa-Ark seems to have power over the wild beasts, making this part of their trek uneventful. 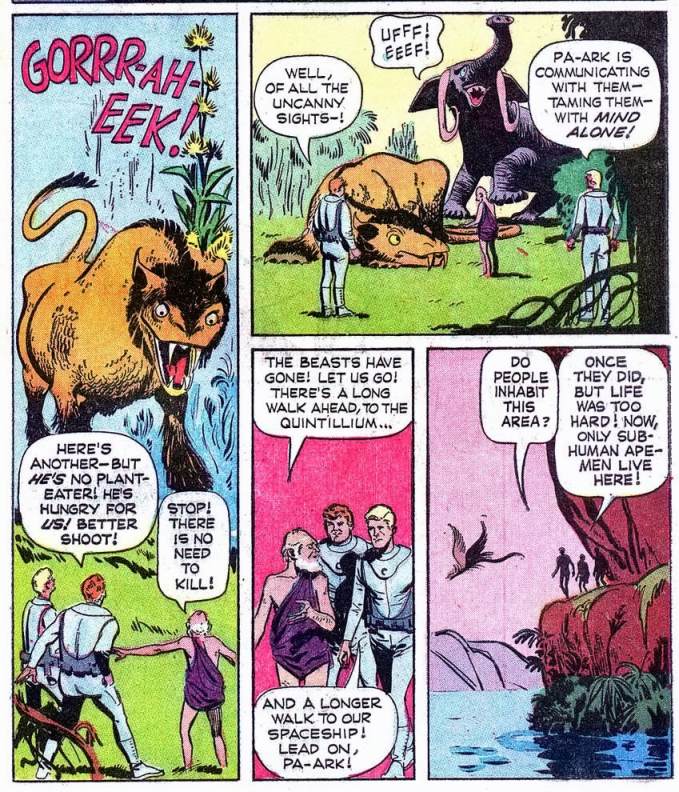 …until they reach the communication center in an old, thought-to-be-abandoned village, and then Pa-Ack takes a bad klunk to the skull… 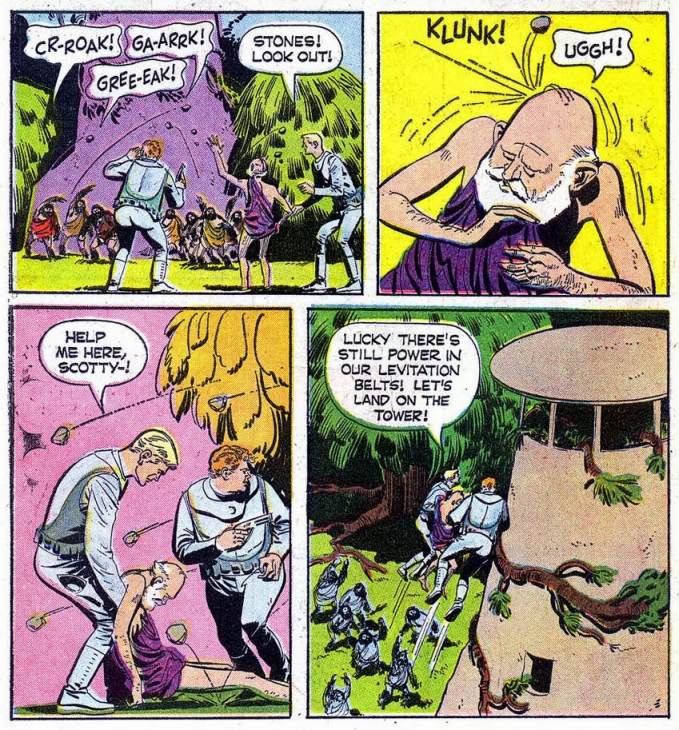 …which messes up his mental powers. This leads to the boys having to use their levitation belts to spring up the side of a nearby structure.
When the primitives try to ascent the stairs, Pa-Ack tries his mental powers, but that nock on the noggin appears to have put the kibosh on them. Rex scares them off with a laser blast. 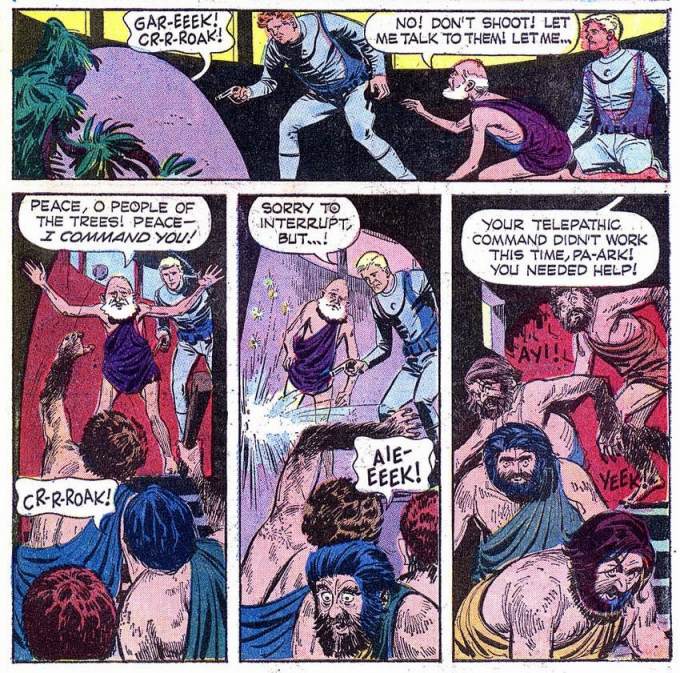 And with the natives gone, the group finds both the Quintillium metal they need and a map back to the ship. But all of that would have to wait for issue two, as this issue ran completely out of space. 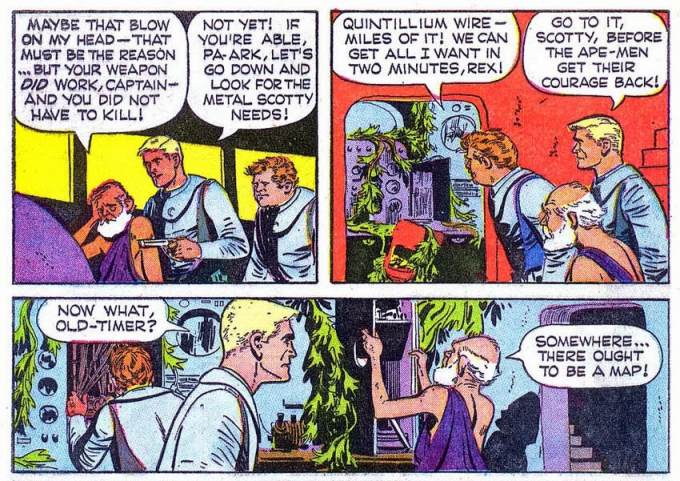 My thoughts on this book were mixed. It’s fun in a black-and-white sci-fi movie from the 50’s kind of way. There’s a bit of simplistic camp and silly action sequences, and those can be enjoyable. However, you have to be in the mood for something with this tone before you open that page. It isn’t full of big concepts nor does it do heavy character explorations, so if you are looking for either, seek out another book.

For our countdown for this issue what we do got is: a spaceship, an alien planet, an underwater city, an underwater jungle, paralysis guns, laser guns, levitation belts, cavemen, cavewomen, telepathic aliens, a space radio, space capes, Quintillium metal, monorails, horse-bears, zebra-lions, rhino-longhorns, women working the night shift, ostracism, weird gurus, really primitive cave people, and about 30 pages of story.

If that fits your needs, grab an issue and a box of Cracker Jacks.
Posted by SonOfCthulhu at 3:01 AM