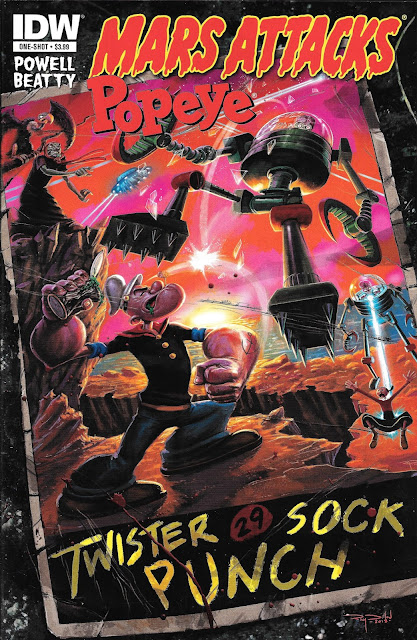 There is no way this issue should work.

Mars Attacks were a series of comics and a major motion picture that were gleaned from the weakly held together narrative on the back of some science fiction trading or “bubble gum” cards from 1962. Due to explicit gore and implied sexual content the cards were pulled only to resurface in 1980’s to become bigger than ever. The movie followed in 1996 along with a round of cards and books that frequent stands even today.

In 2012, license holder IDW decided to commemorate the series 50th anniversary by issuing five single issue crossovers with some of their other titles…with artists and creators throwing in incentive covers for those five issues that made it appear that Mars Attacks were crossing over with pretty much everything and the kitchen sink. The five titles they crossed over with were Popeye, rock group Kiss, The Real Ghostbusters, Transformers, and Zombies vs. Aliens. Incentive covers featured Cerebus by Dave Sim, Spike from Buffy, the Vampire Slayer, Opus from Berkely Breathed, Chew, Strangers in Paradise by Terry Moore and many others. 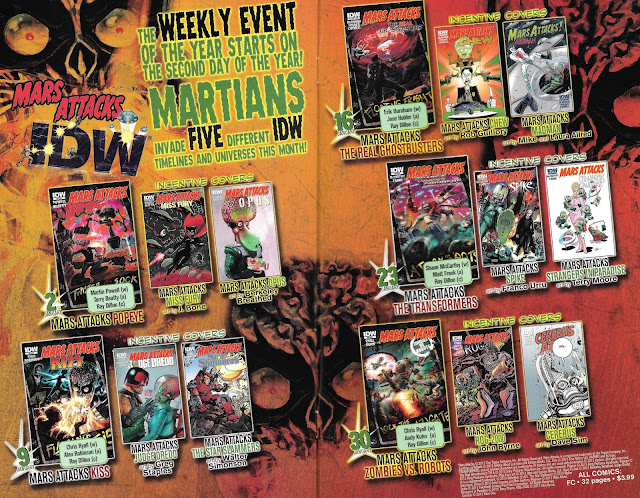 But this issue really contains Mars Attacks Popeye and there is just no way that these two should work in one story. Tonally, Popeye is a children’s cartoon mythology where the good guy always triumphs without lasting horrific ramifications. Mars Attacks…is quite a bit darker and contains fairly adult subtext. Clearly this will come off as a huge miss.

Which is why, I am sitting here stunned to tell you that it completely doesn’t.

This is perhaps my favorite kids comic book of all time. Writer Martin Powell has given Popeye’s crusty seaman dialect the care it deserves, created a plot where the Martian invaders', while muted from their prior human-experimentation and melting ray-beam selves, actions are likely and fit, while spinning a tale that is a joy to read. 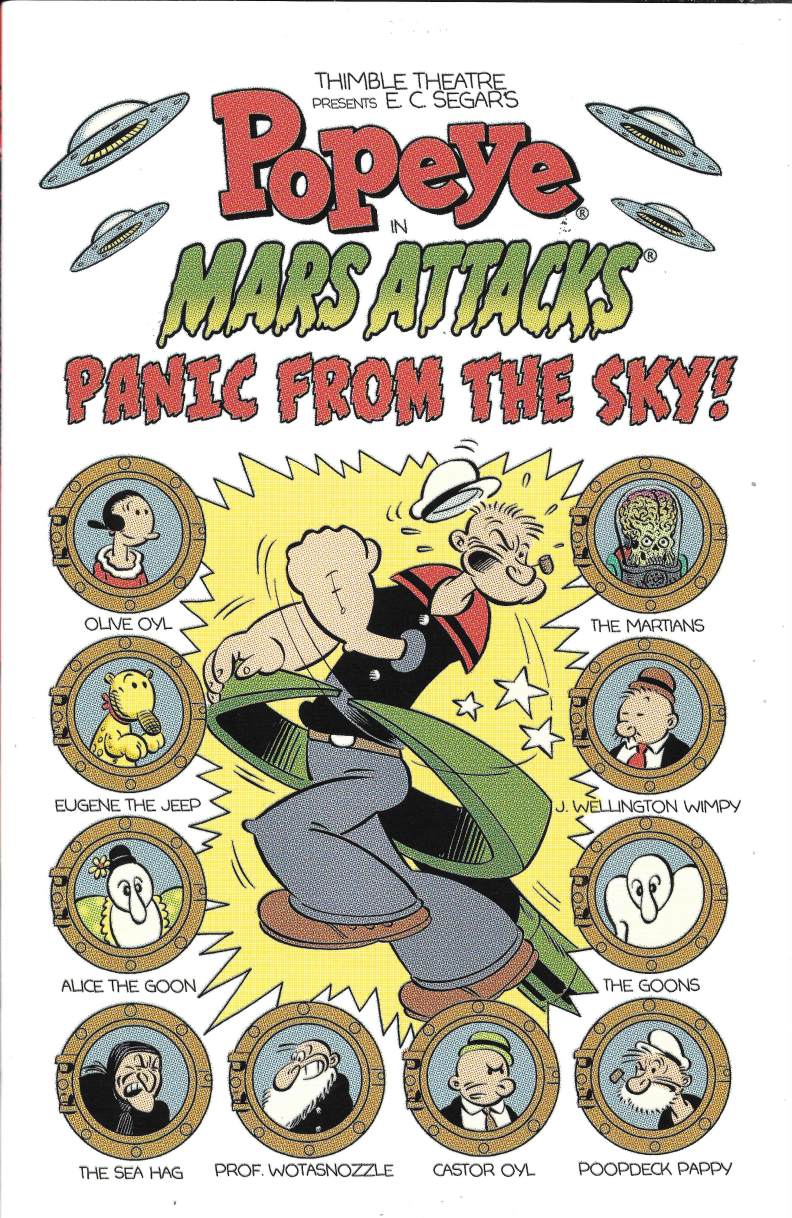 I know I’m gushing, but this book was just a hell of a lot of fun. I sought it out after reading the messes that were Mars Attacks Image and Mars Attacks Savage Dragon thinking this would be a rotten apple. But no. It was amazing. Our splash page above shows our cast of characters, so I’m going to jump in to the story proper. At 21 pages, it isn’t a huge story, but it feels like it has a lot going on in it.

We begin in the Oyle house as Papa Oyle consoles Olive, who is worried about Popeye and Castor being out on the boat in the brewing thunderstorm. As Papa drifts off to sleep, a news flash comes on about some trouble some meteors. 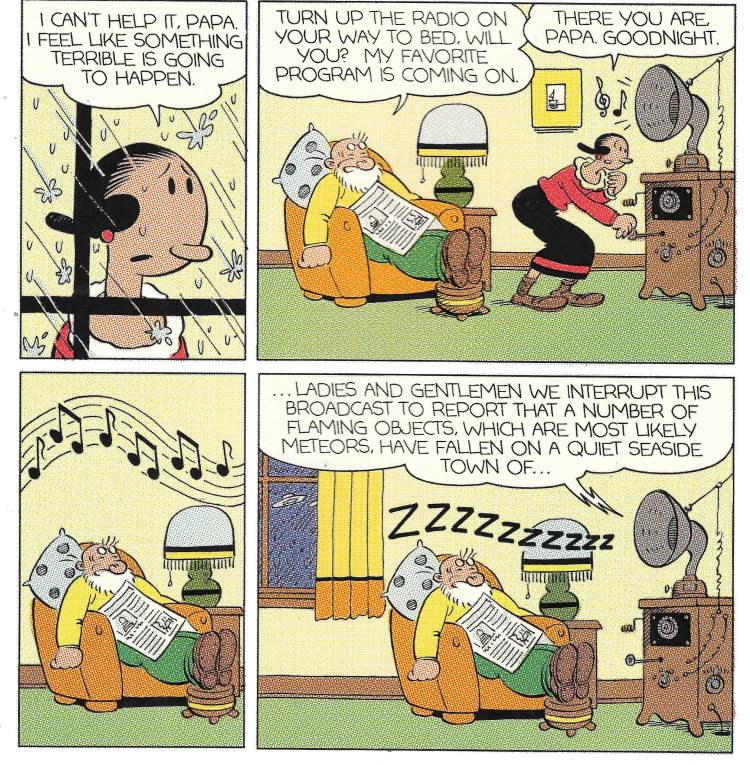 Note the art style here is much like Popeye by way of the old Disney comics. And that doesn’t change when we get our first glimpse of the Martians. However the Mars Attacks universe doesn’t have something the Popeye universe does and that’s the Sea Hag and her magic. Quickly the Martians first wave is put under her more PG-friendly spell. 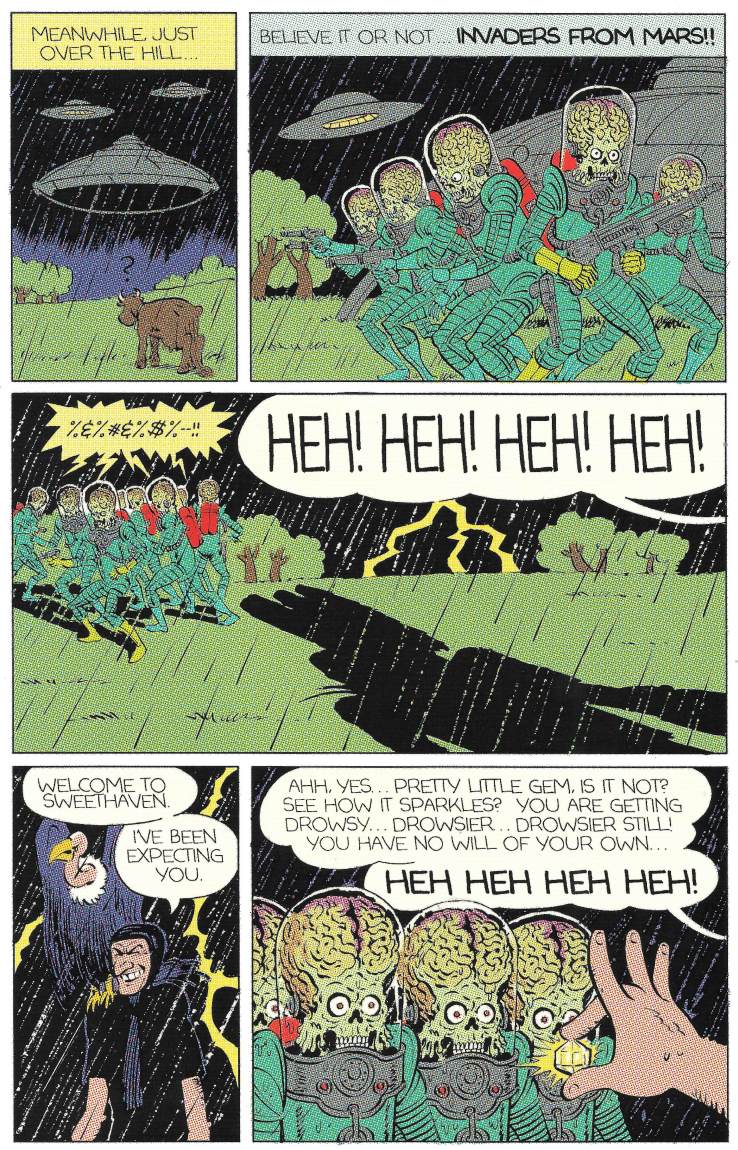 Popeye and Castor arrive at the Oyle house the next morning to find it in ruins. And a HUGE hats off to Powell’s ability to capture every broken enunciation that Popeye can throw out. I LOVE this book soo much for that. 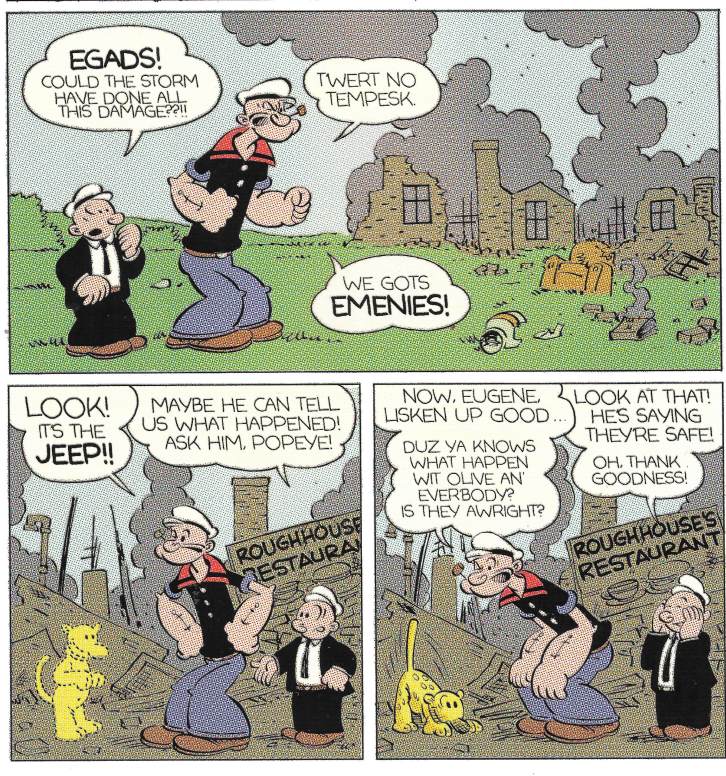 The Jeep (ones of me favorick charactures) leads the pair into the cellar where they find all the family safe and sound. Not only that Professor Wotasnozzle knows who attacked the Oyle clan. 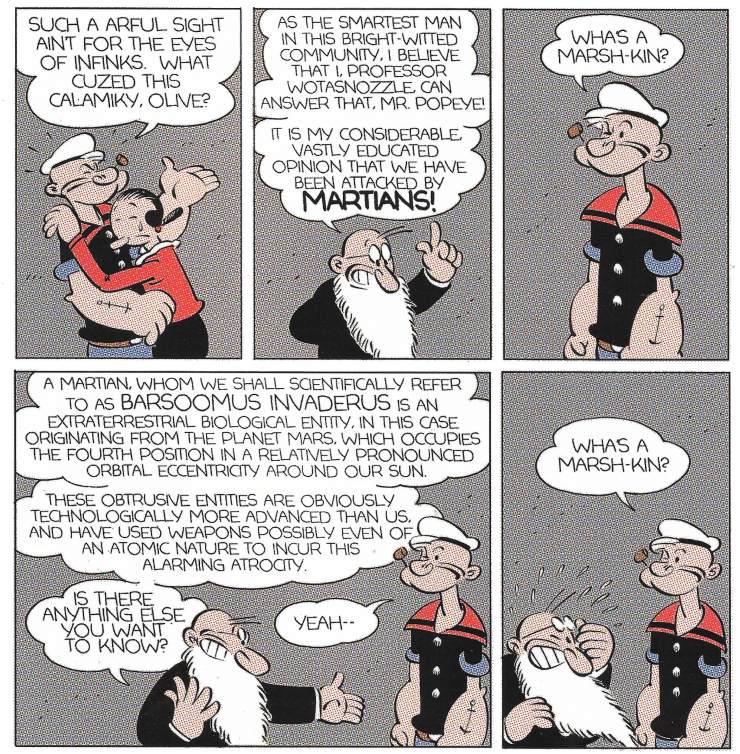 Yes, I did a spit take. So good. Clever and funny and on point. It works. The entire thing works.

Popeye and the Professor have the Jeep steal one of Martian’s ray guns, which he does in short order and the professor retires to work out how to make it ineffective. Meanwhile, Popeye decides to go draft an army because “Marsh-kin or no Marsh-kin, I wins me fights with me fisks!” His first stop is his Poodeck Pappy. 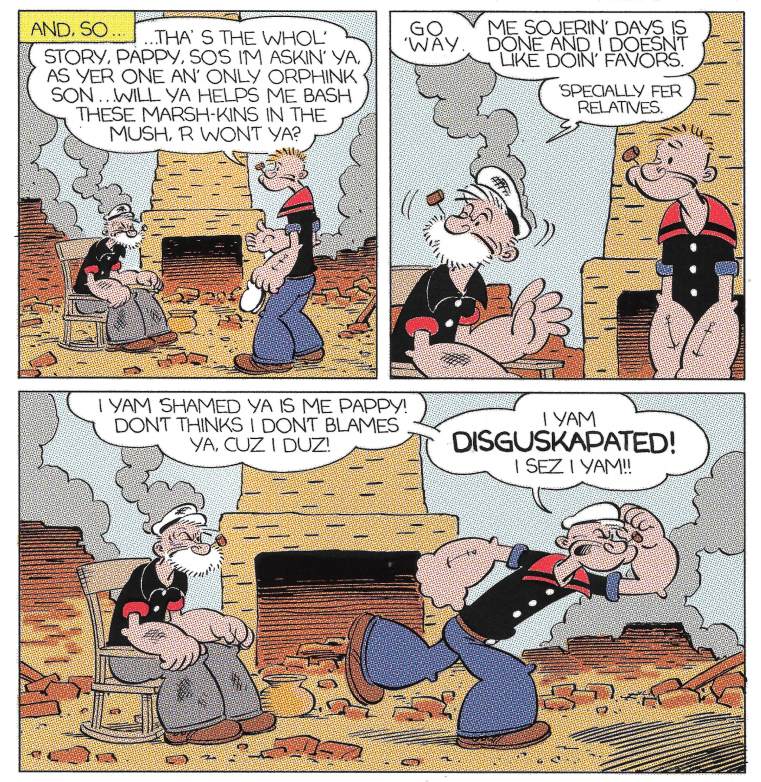 And while that doesn’t work out so well, next up is Alice the goon, who is way ahead of the sailor man. 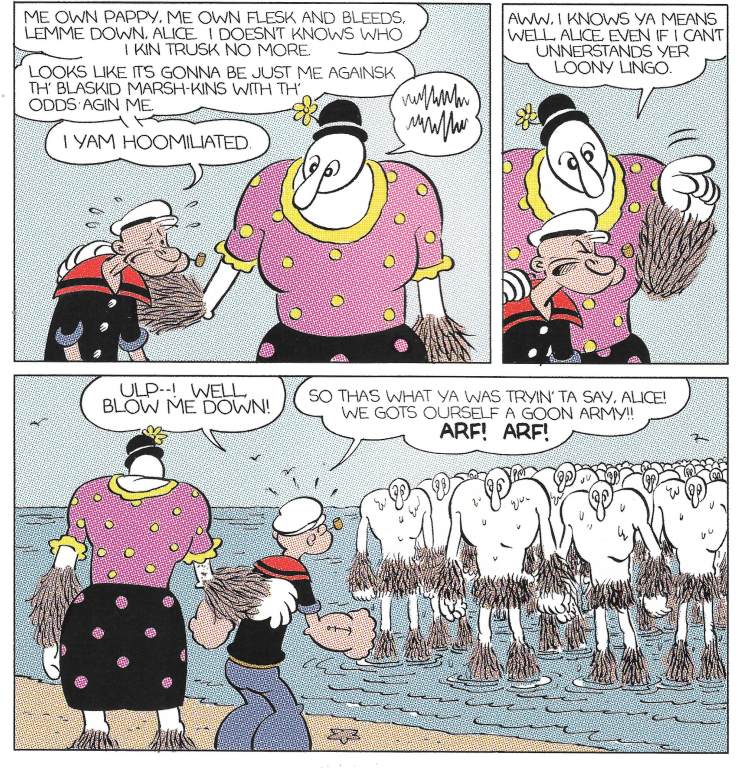 And on the other front, the professor has invented a machine that makes the Martian ray guns only partially effective at disintegration. 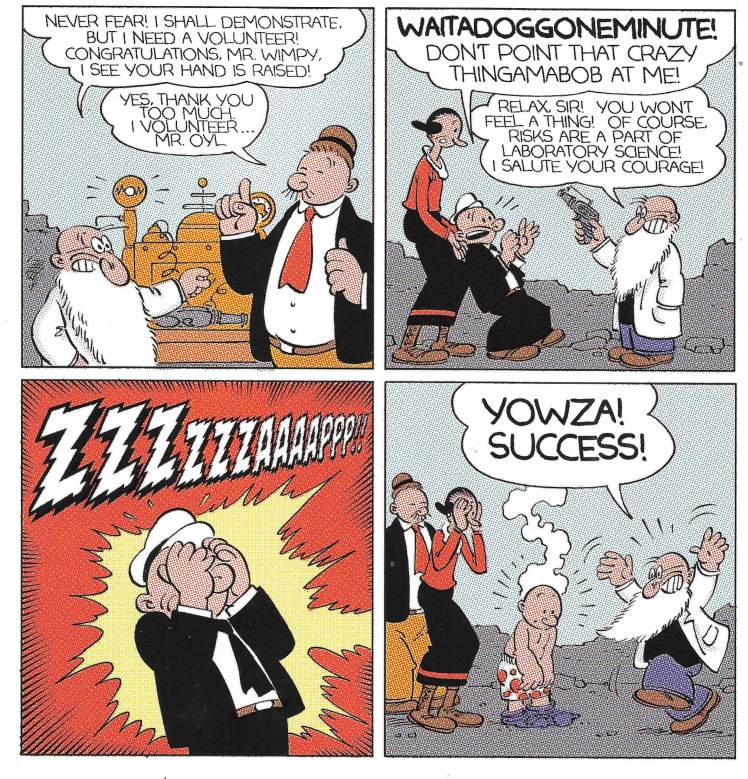 Popeye and the Goon army arrive just in time and the Sea Hag closes her trap, bringing all the Martian forces to bear on our heroes. 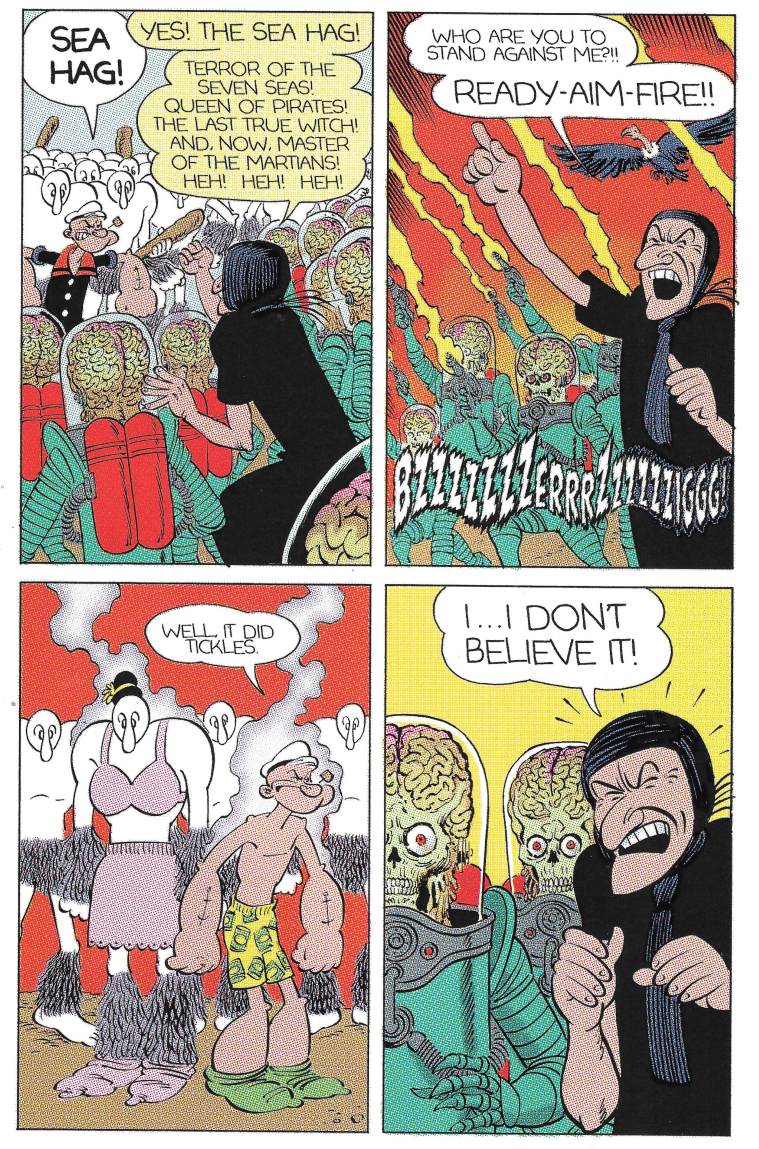 The Hag is in for a surprise as MOST of our heroes maneuvers work out as expected. The ray guns don’t fry them… 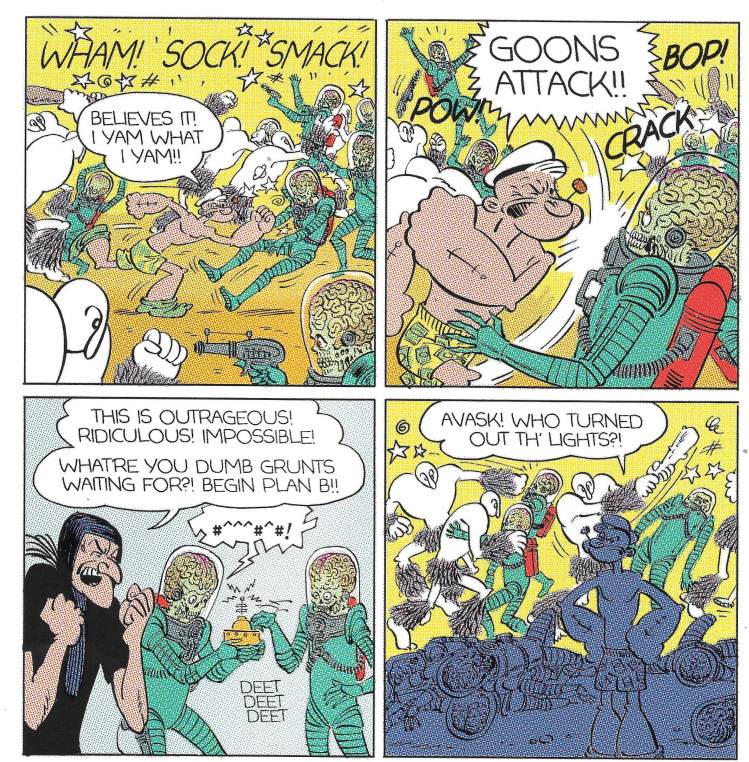 …and the Goon army handles the attacking Martians with ease. But the Hag isn’t done yet. She is one more trick up her sleeve. 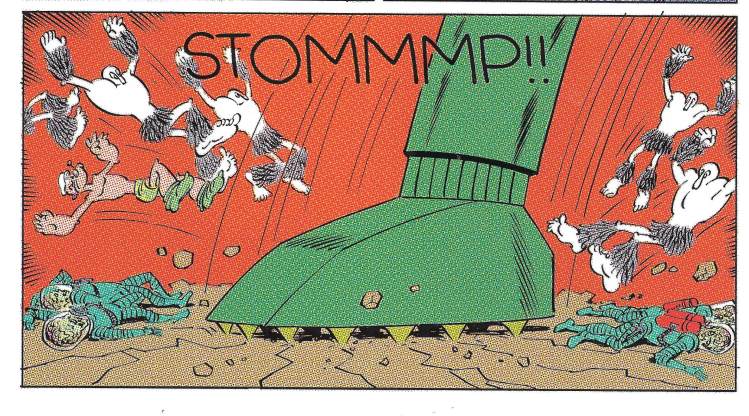 Or perhaps make that three tricks. And those giant alien metal machines are too much for the Alice and her fellow Goons. Popeye prepares to make a valiant stand against them alone. 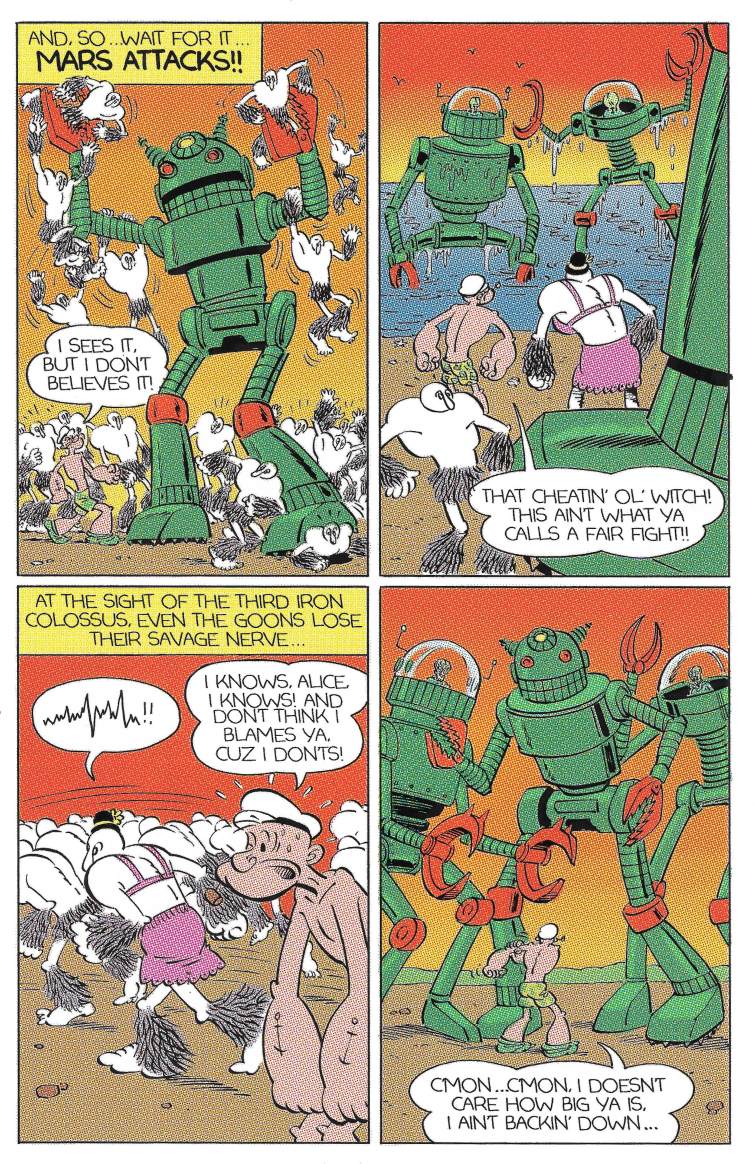 He’s smashed into the ground and the Hag is ready to flatten him once and for all. 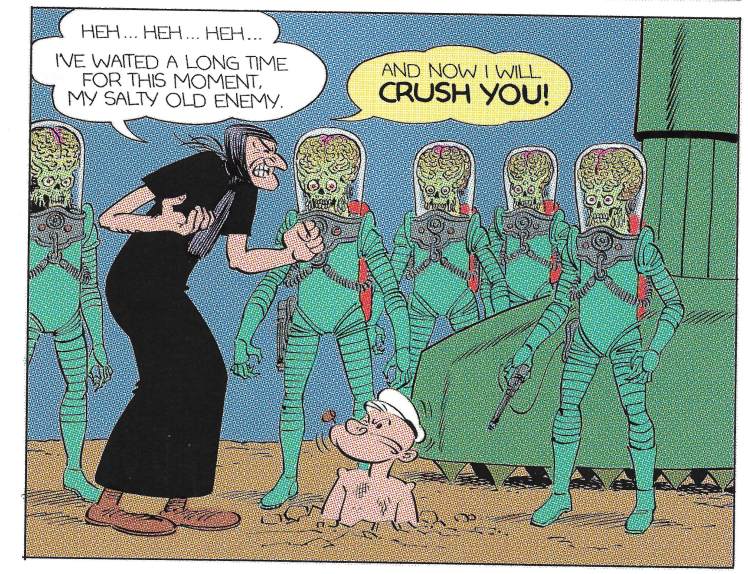 When a voice from behind her speaks up… 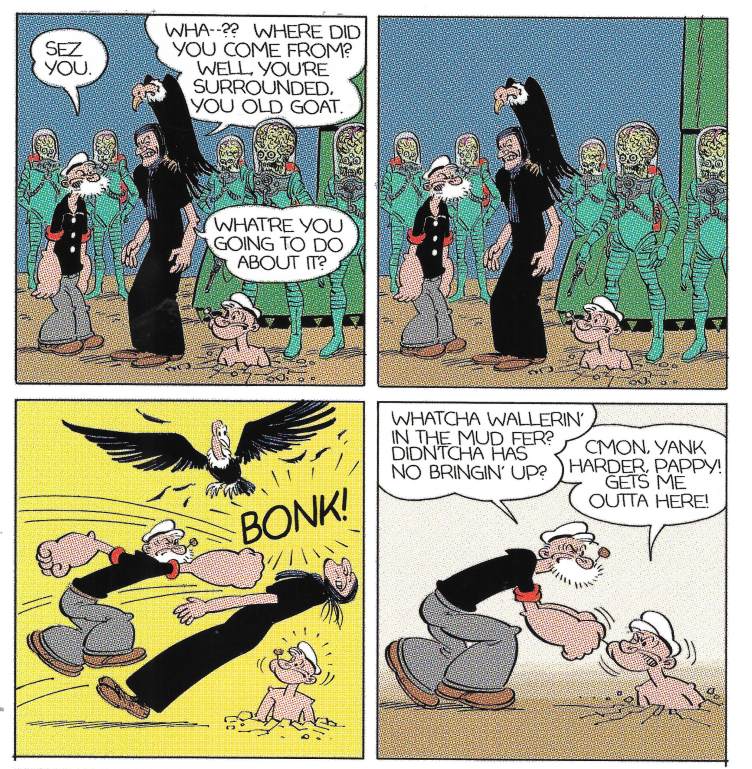 PAPPY! To the rescue. And not just him, but a hearty can of iron enriched… 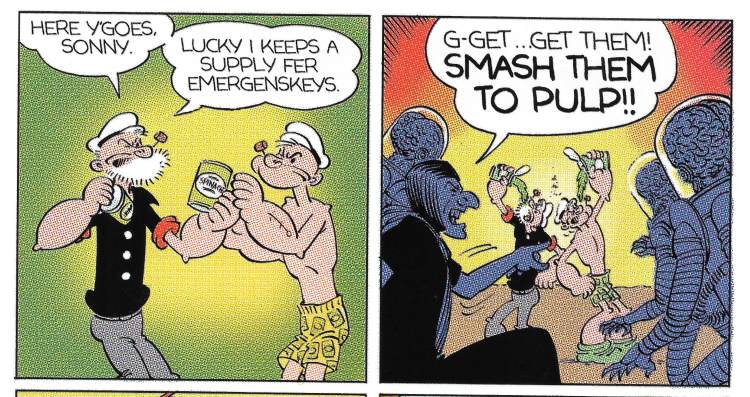 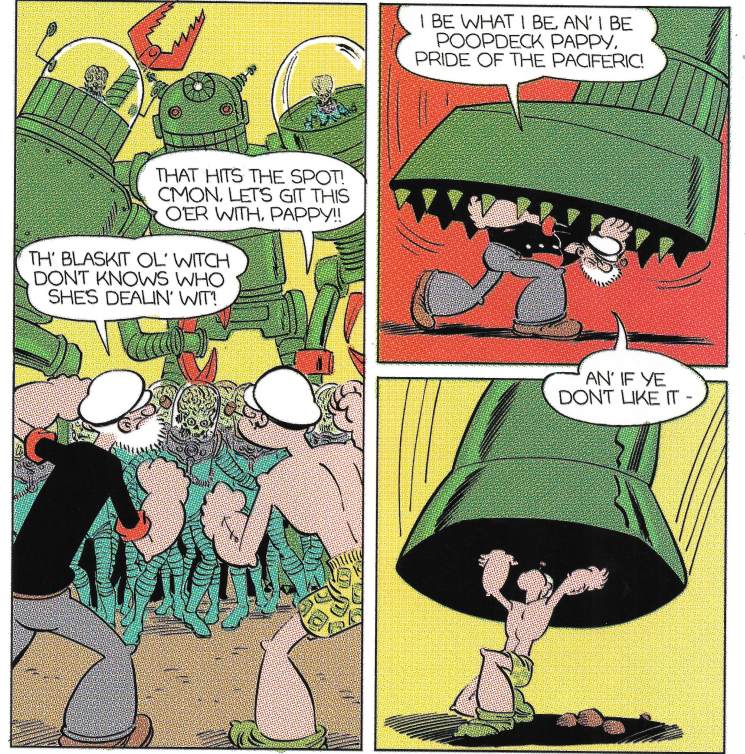 …mop the floor with the Martian death machines. 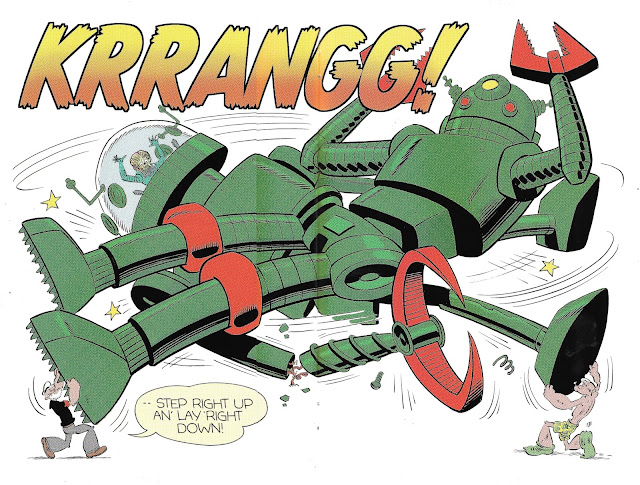 …and the alien army. 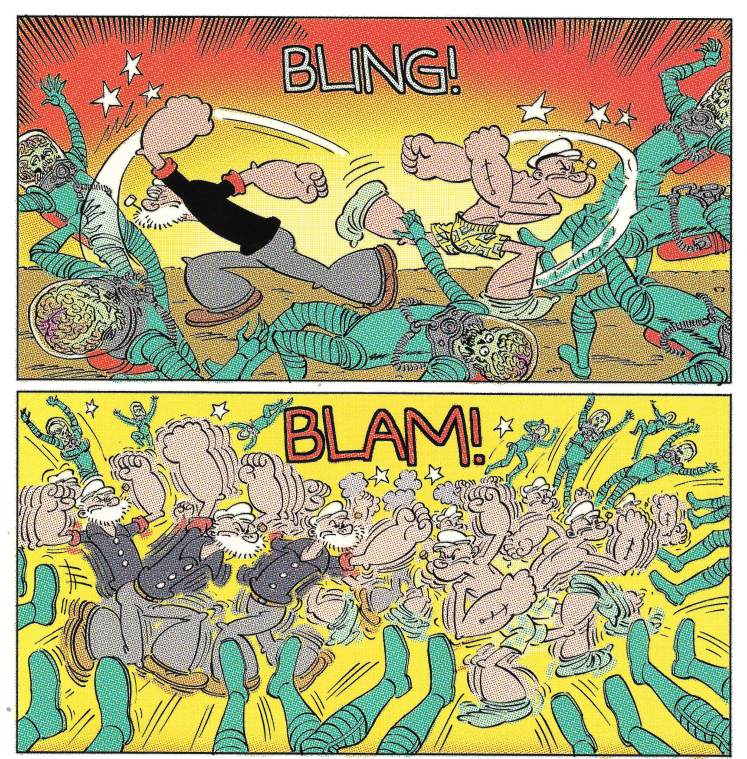 The Sea Hag tries to rally her troops… 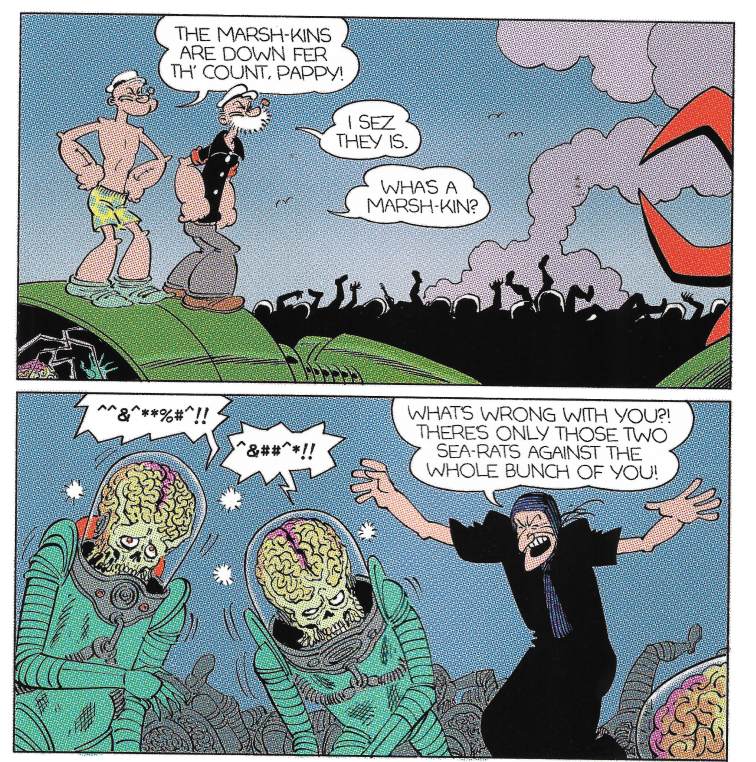 …but they’ve seriously had enough of Earth and of her. 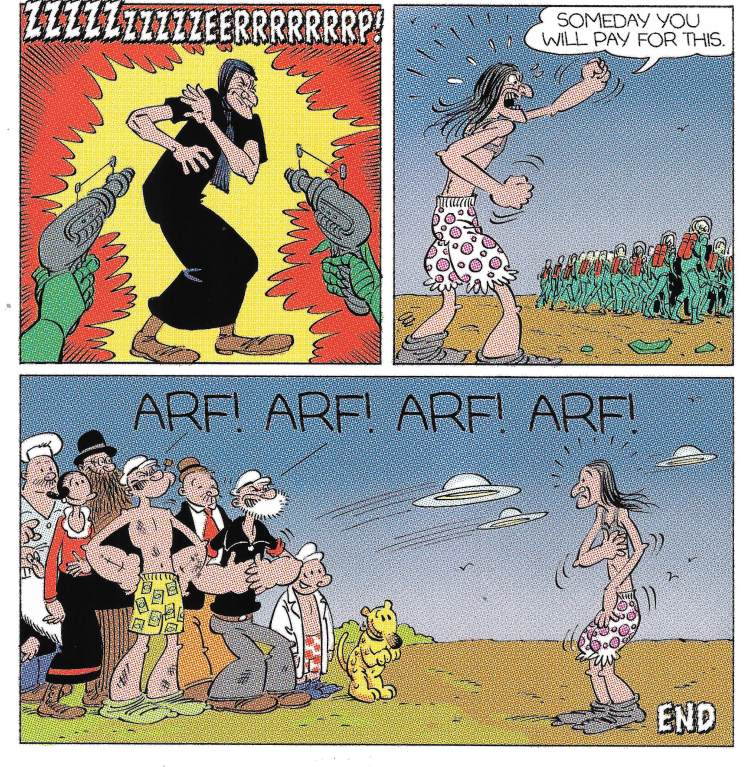 And we get the happy ending that we were expecting.

Loved this book. So unexpectedly good that it raised my estimation of what the others in the short team-up series would have been like. Mars Attacks Kiss was next. I suppose I could be talked into checking it out sometime down the road. Not sure anything would top this though.

It was just too much fun.
Posted by SonOfCthulhu at 2:57 AM