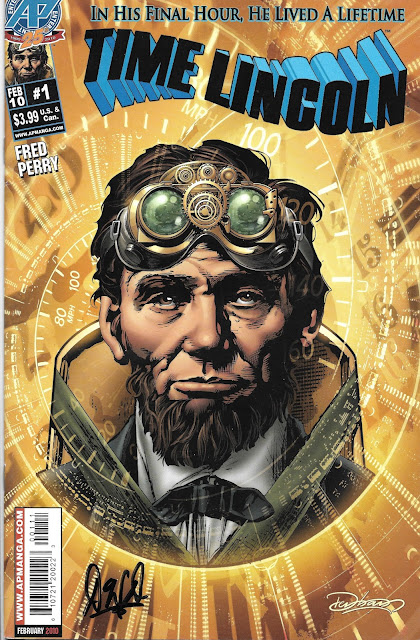 Because the concept sounds intriguing, giving AP one more try

Feeling as if I would give Antarctic Press one more chance this go round but only because we have Fred Perry doing art and story, I picked up this crazy sounding book called “Time Lincoln.” The concept of a steampunk-looking Lincoln that is some kind of time travelling adventurer was just too tempting to resist. I swore off Antarctic Press after their last debacle, which means that me never having to pick up one of those Gold Diggers is riding on this one.

Having read the entire book, I can state that it looks like I WILL have to read a Gold Digger eventually as this one expires just barely over the line. It has a MESS of problems, but I found it enjoyable enough to give my AP boycott a moratorium for now.

What was its main problem? Every page of the episode felt like it was told in past tense, stealing any tension and also creating a very real frustration on my part for them to just get on with the REAL story…instead of rehashing backstory as a substitute for present day conflict. 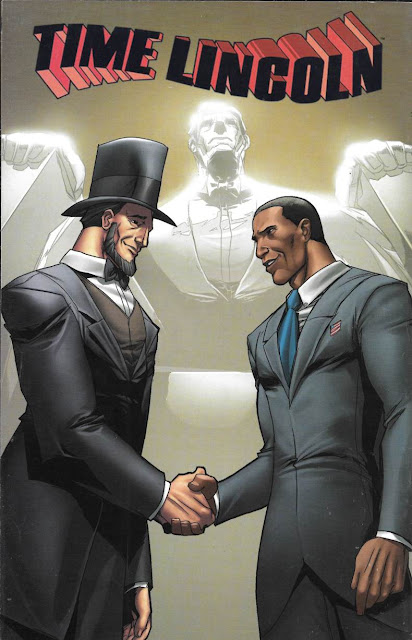 Above: the back cover and just one of many intriguing concepts we don't see get played out.

In essence, the plot in Time Lincoln is a temporal mess and I mean that in both a story-wise as well as structure-wise. Let me show you.

We arrive in the book at Ford’s Theater, after the American Civil War, with Lincoln about to be assassinated. Except this isn’t going down like any history book you’ve ever read.
For one thing, the guy murdering Lincoln has time for a huge soliloquy on how he should have killed him long ago and how his assassination was probably faked to throw him off the trail. We zoom in to reveal a glowy pink gun thing as the guy wraps up telling Lincoln how doomed he is and we find that it is not John Wilkes Booth as expected, but is instead… 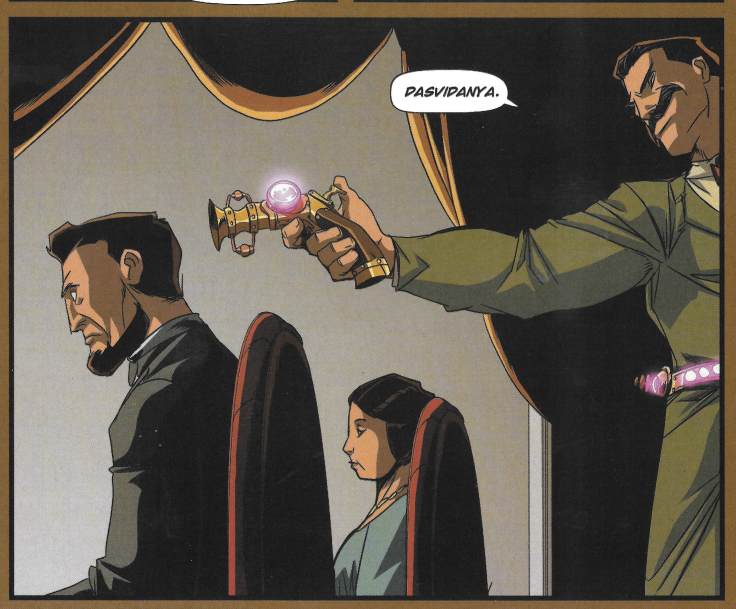 I’ll admit this a neat hook. Having the cold war’s most evil of all human monsters as the antagonist of the civil war’s most benevolent of leaders has a certain appeal to it. Having been revealed by his long-winded monologue, shouldn’t Lincoln be reacting at this point?
Well, no, as it works out, because Stalin has frozen time to accomplish this assassination. However somehow Lincoln appears to perceive his presence… 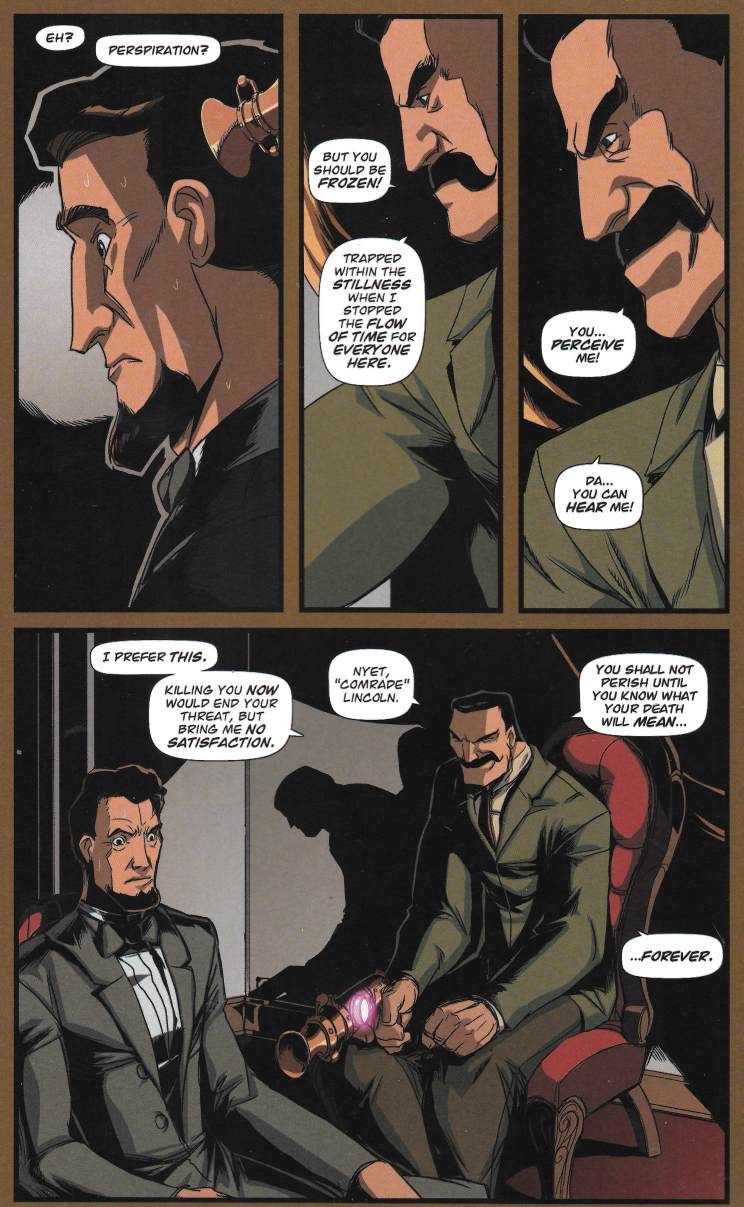 …and it is here the story starts to break down a bit for me.

Because Stalin now recounts his own origin for the mostly time-stuck Lincoln, unwinding the tale in a way that feels like an exposition dump straight from the story bible. It doesn’t come off like a natural way to get to know the villain character and it bothers me a bit. 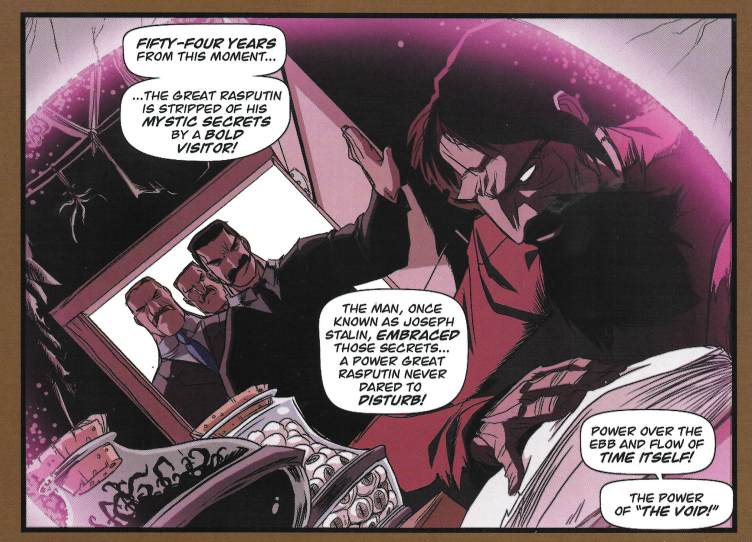 So he recounts how he learned how to time travel from Rasputin through some mystical something or other called “The Void.” It’s kind of odd and I miss a more traditional villain introduction where we meet the person behind the villainy first THEN we get to him attaining villain status. But this is Stalin we are talking about here. 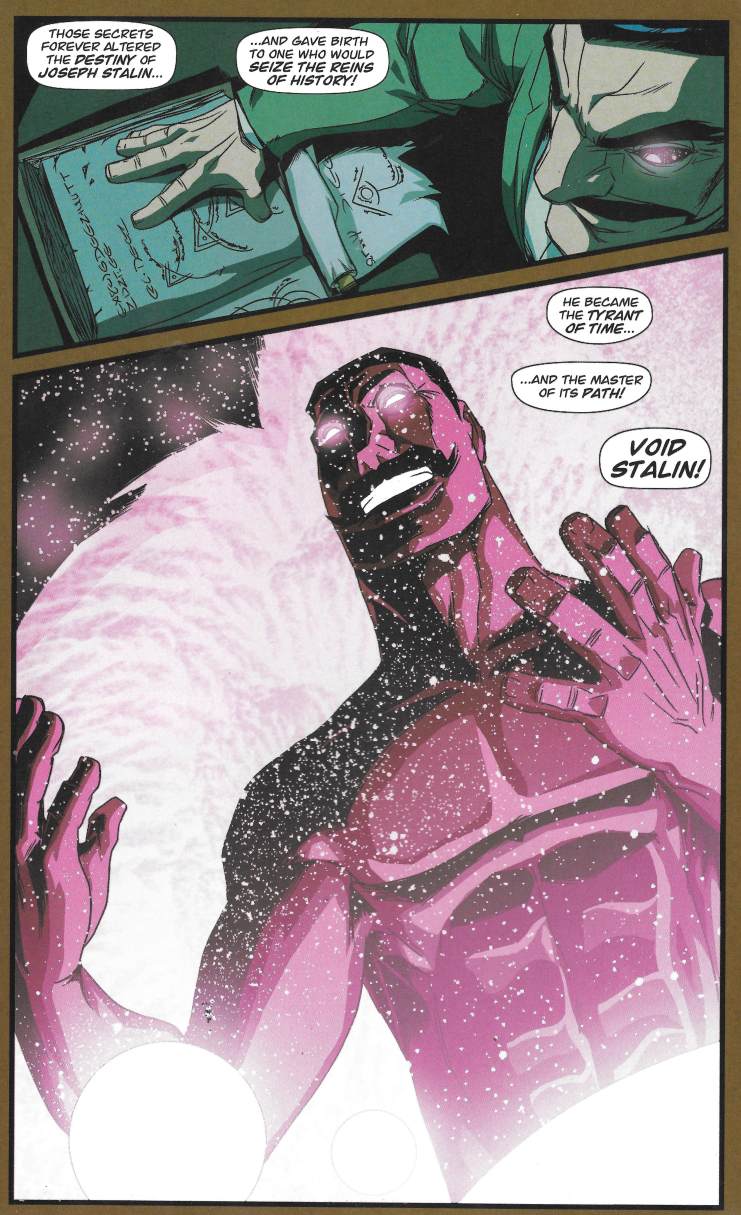 And we get some Stalin ‘splation of how the Void relates to dark matter and that’s how he can do all of his time travel mumbo jumbo, not to mention stop time. Appears that as he goes to finally kill Lincoln that there is someone else with glowey future weapons in the theater as well. 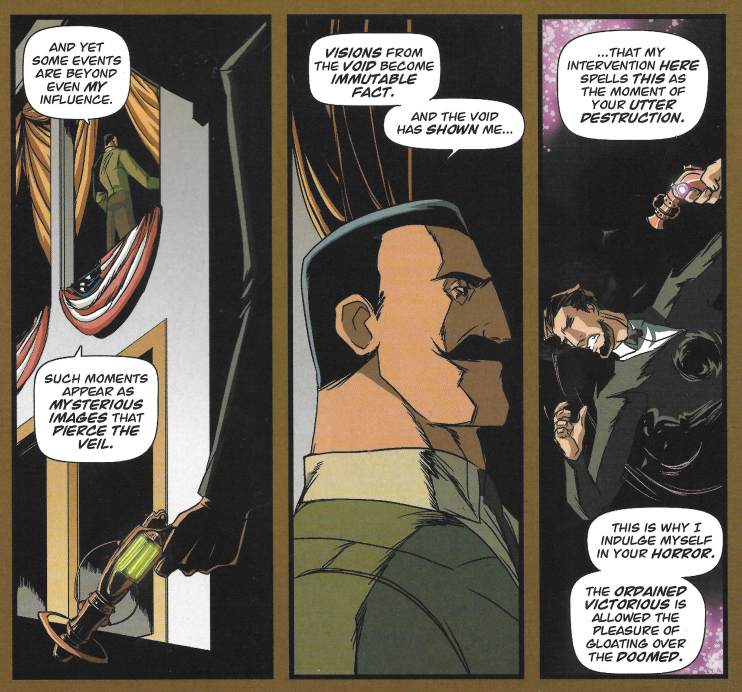 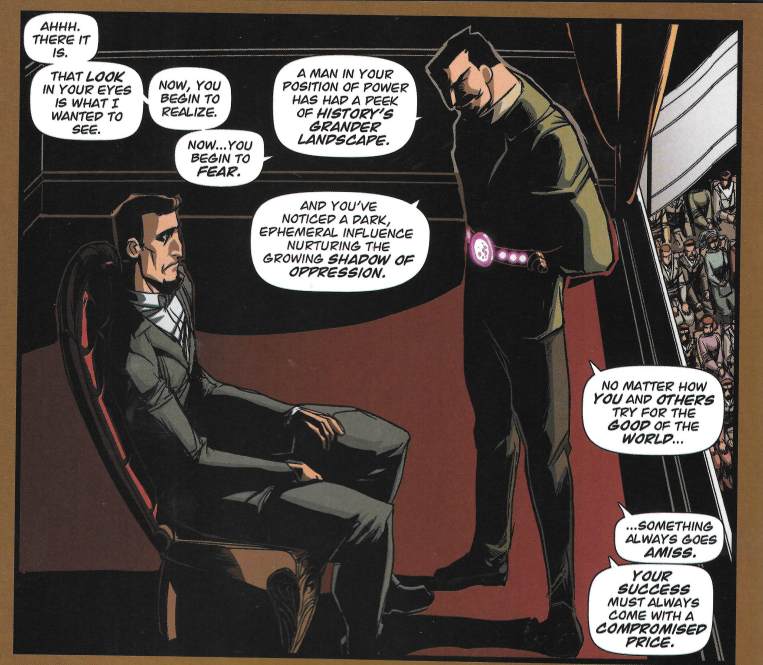 Next up, some chit-chat about Time Lincoln’s four teammates who he will no longer get to meet because he will be shot in just a moment. And these were some pretty inspired choices. 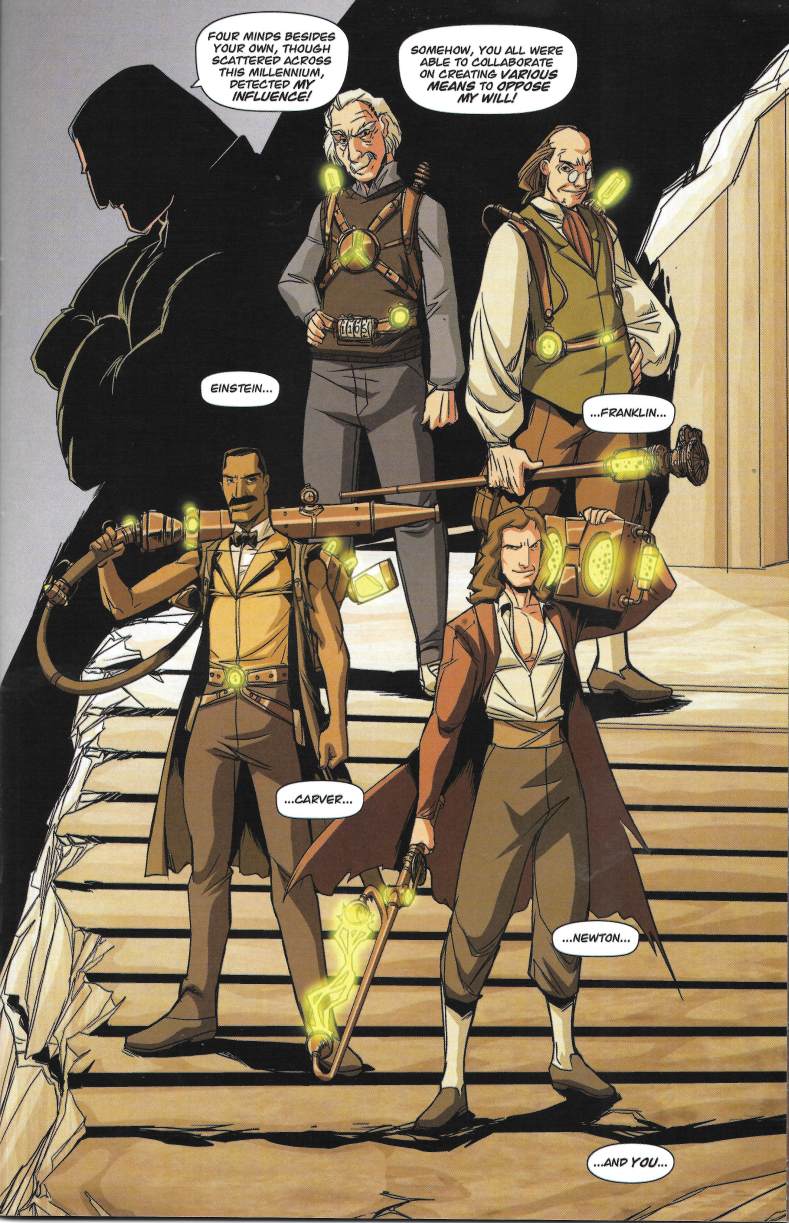 True, there’s no “Time Tesla” in this, but I think that’s because he was in several other series in a starring role. Nice to throw in George Washington Carver. That guy never gets enough credit, IMHO. Plus he works for peanuts. *rim shot*

But now we shift to the “bad” part of the book, that being that we are shown conflicts with spoken resolutions that look like they could have been fun romps. However, the stylistic choice was made to treat these potential good story ideas as throwaway jokes instead. Sure, I’d love to read a well-written story of MepHitler trying to destroy democracy at Mount Rushmore or see Time Lincoln saving President Obama from Mao Tse Tung’s flying forces. There are enough silly, oddball ideas here to make interesting stories. All it would take is some good character dialogue that built these one note names into decent menaces and a few pages of art to turn this into a good three volumes of character history. 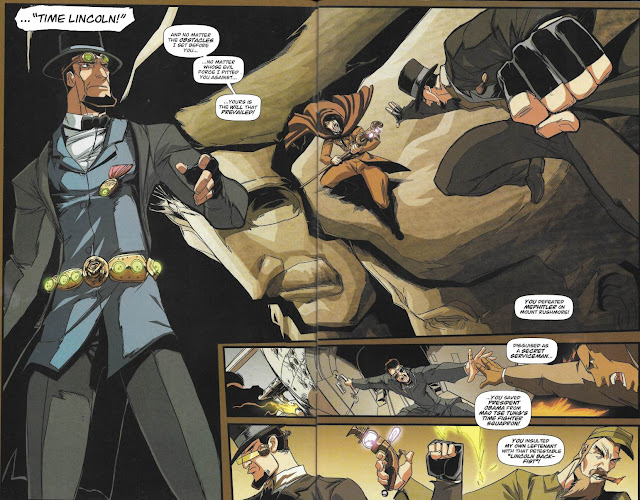 But they don’t do that. They allude to it and move on, which in my mind makes this feel again like AP is making a…(the thing they’ve done before)…quick cash grab. There isn’t an investment in the Time Lincoln character. If there was, they’d let him speak by now in his own comic book. And they are dispensing with around a year’s worth of decent plot ideas in the span of three panels which makes me realize that they aren’t interested in developing the character over the long term.

Which is sad. Because, I, the reader, bought this book in hope of liking the main “Time Lincoln” character. Not just a little, not just for one issue, but by a lot and for a long time.

At this point in the story, Void Stalin decides to kill Lincoln before he can become Time Lincoln… 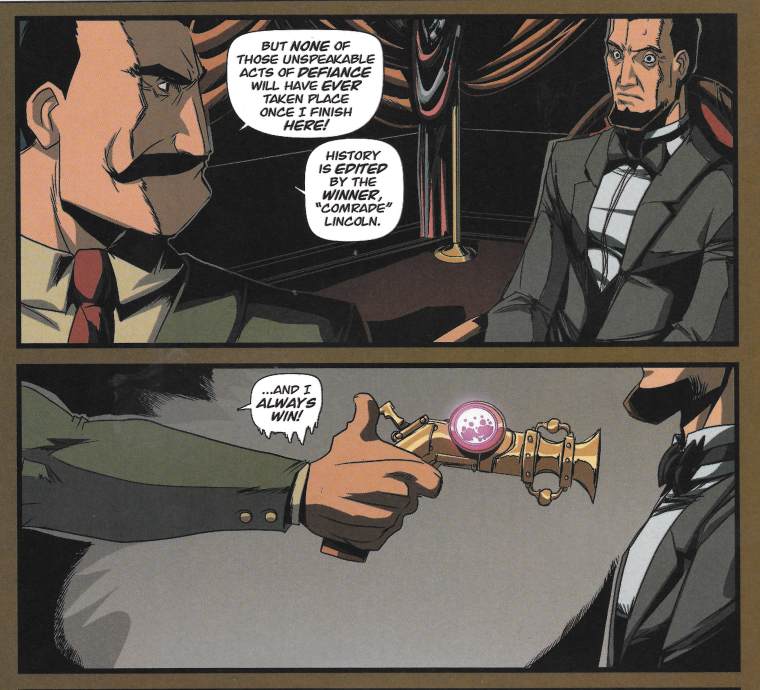 …but is prevented by someone with glowey green weaponry shooting at him and destroying his sheild.

As he turns to see who it was… 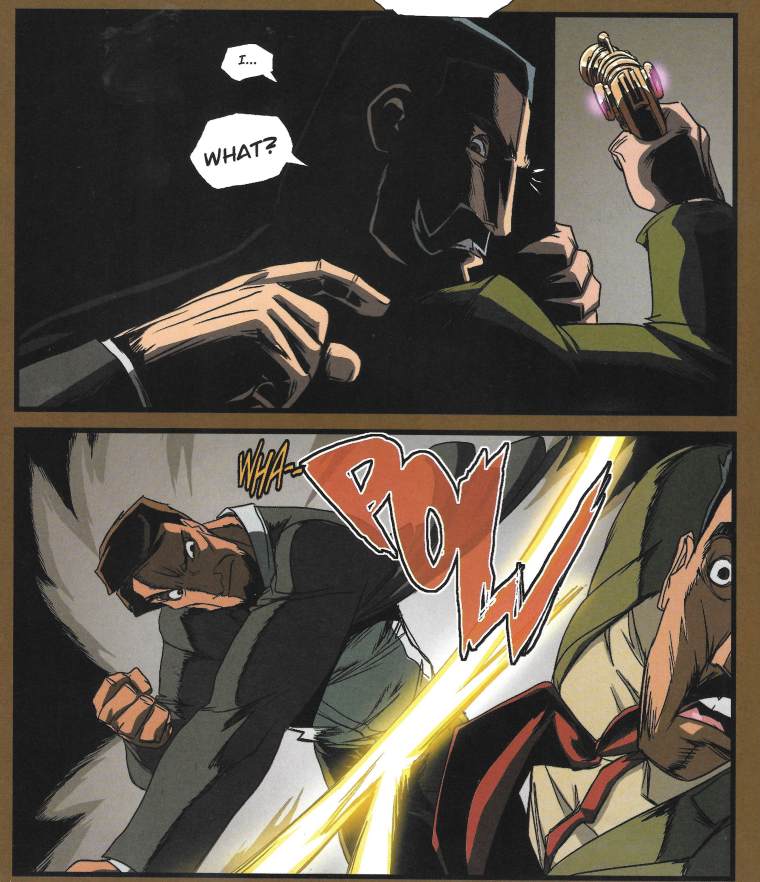 Lincoln punches the crap out of him. Actually, looks ready to thrash Stalin to within an inch of his life. 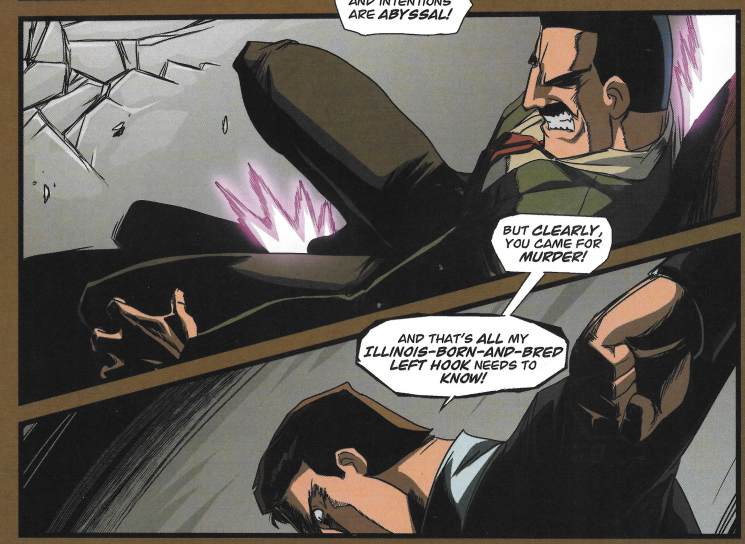 However, Stalin uses his time freeze powers again and stops Lincoln from landing that next blow. Now would be the opportunity to end all this mess but again… 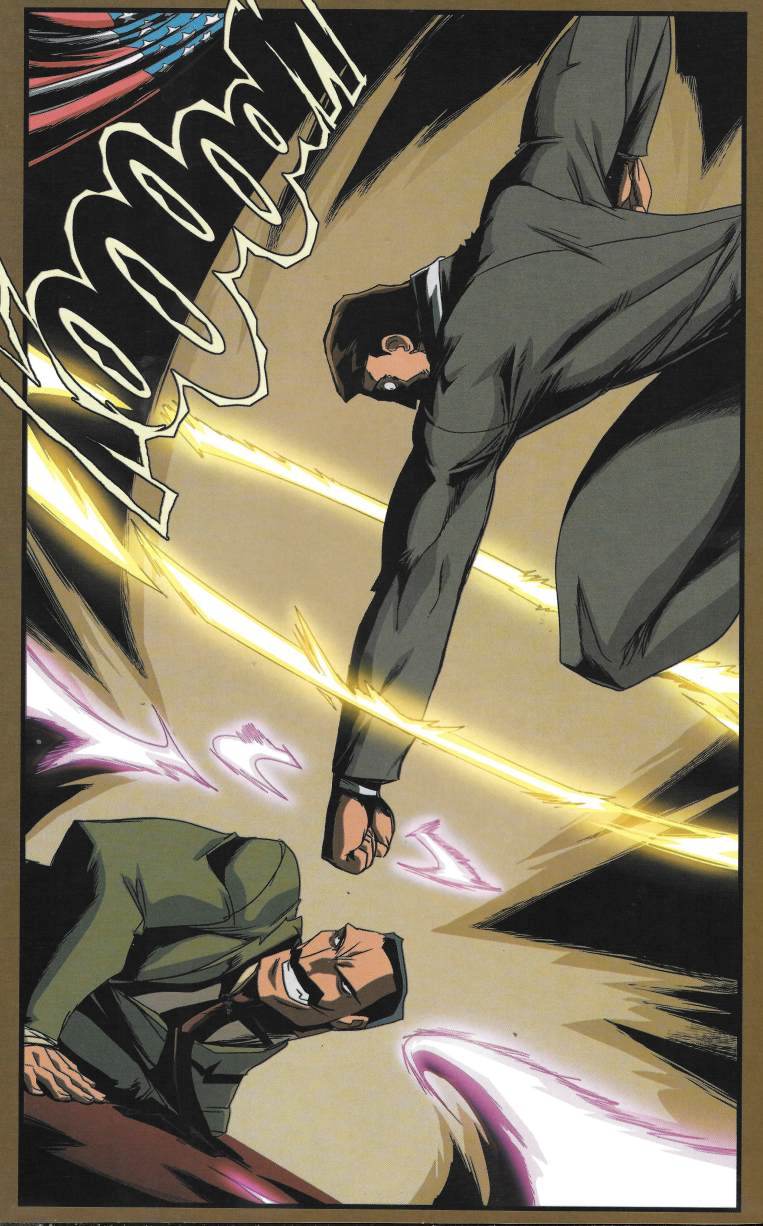 …and here is where things begin to break down for me. Real life Stalin was a horrible guy, a mass murderer. By using him and Hitler and some of the others, we get villains we don’t have to have a backstory on. Yet in this tale Stalin really hasn’t done anything villainous. He has threatened to kill Lincoln, but keeps talking himself out of it. He has had numerous chances to close the deal, but he doesn’t.

At this point, I no longer take him as a credible threat. 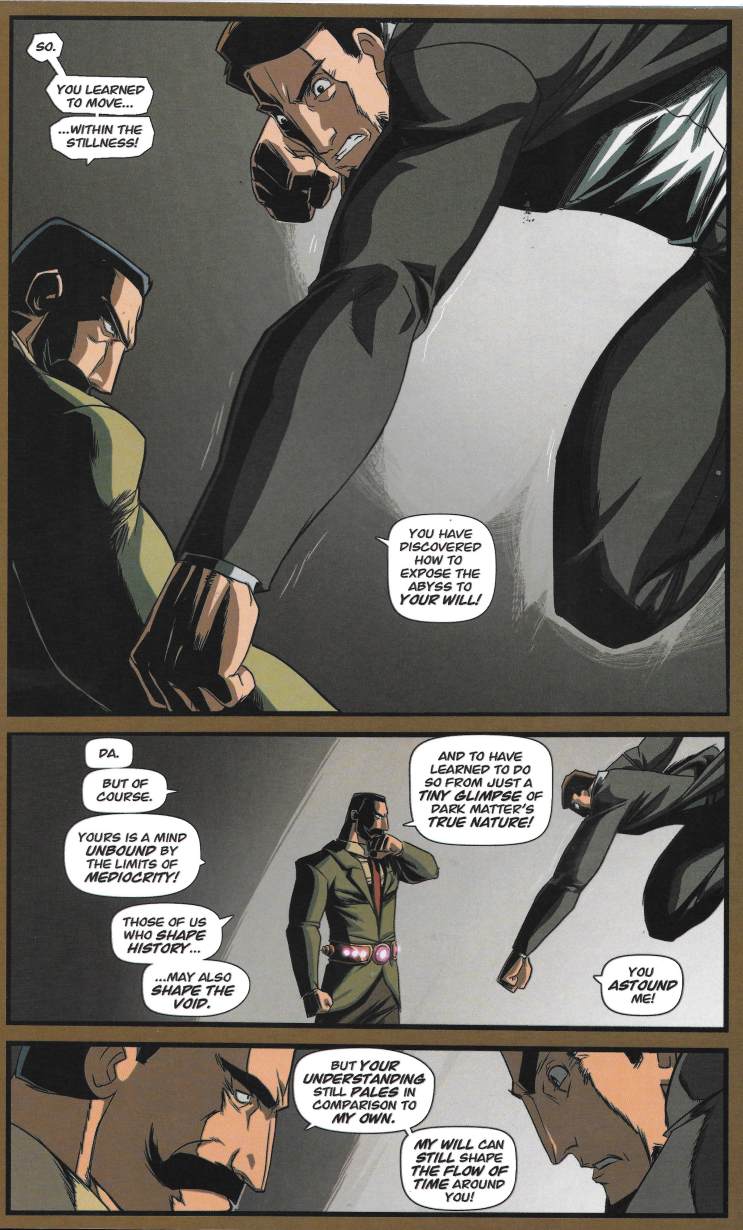 He punches Lincoln. When he could have killed him in numerous ways, this is the worst the book gives us. I’m calling shenanigans. 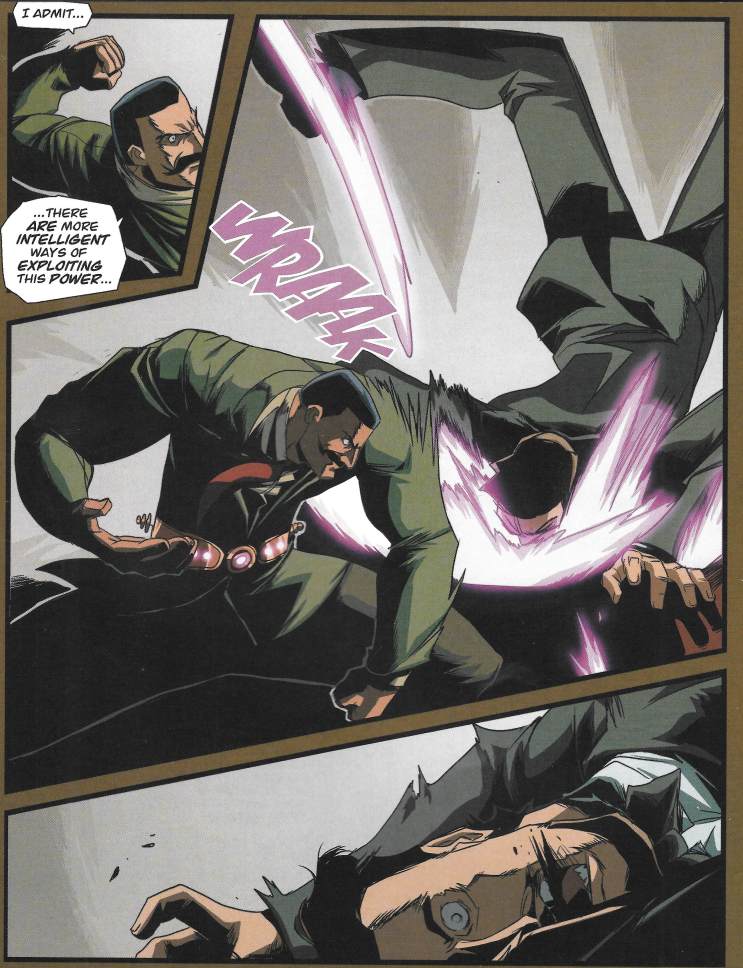 And speaking of shenanigans… 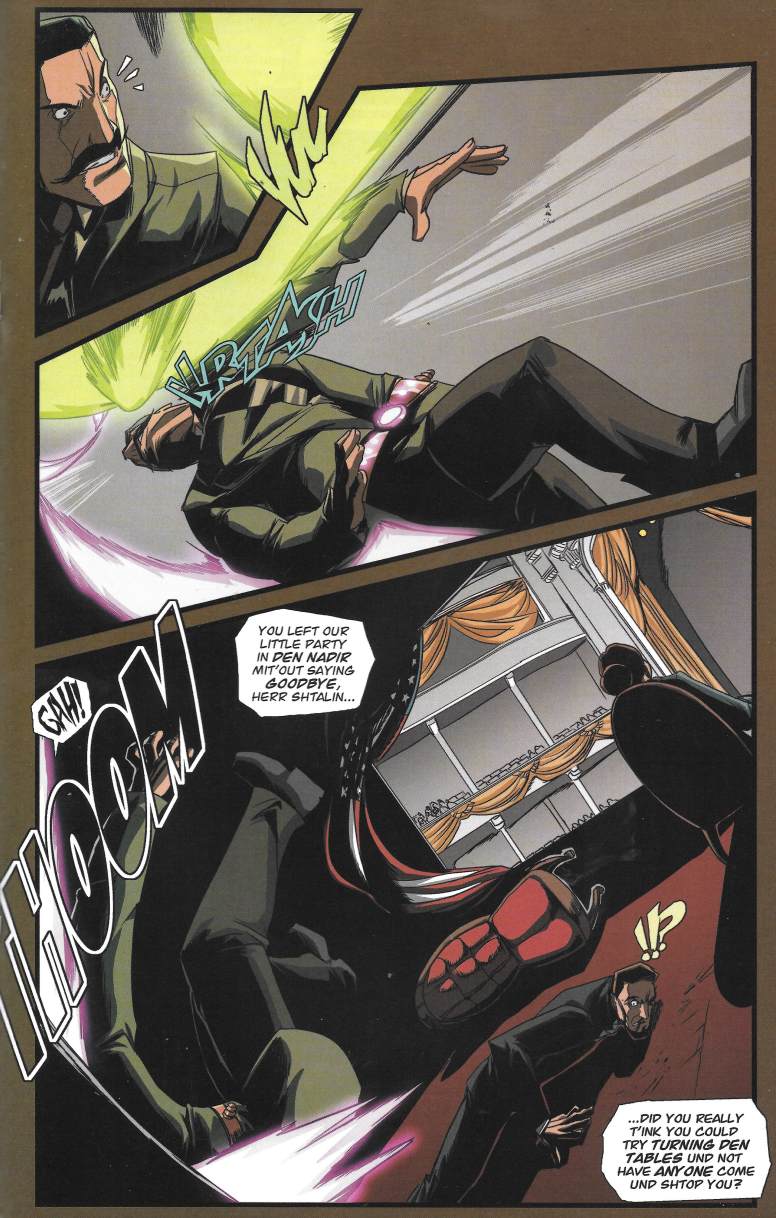 …in steps the rest of Team “Time Lincoln.”

Ready to bring the smackdown on Stalin. Before they start, he asks how they tracked him to this specific sliver of time, to which Newton won’t answer, causing Stalin to bring in…

…his crack team of evil historicals (I only know Napoleon and Castro out of those four), which distracts the forces long enough for Stalin to turn his attention back to Lincoln. 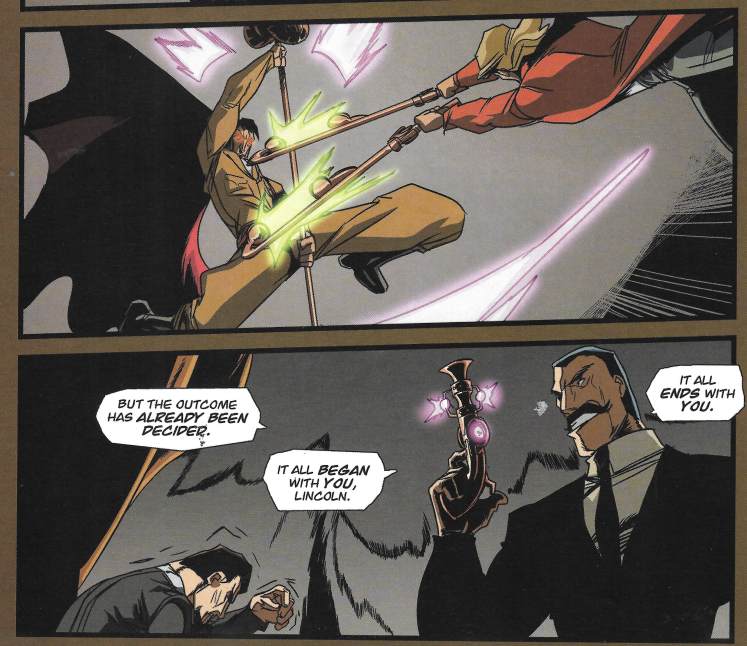 Who is pushed out the way by another gentleman who kills Stalin in his parting shot, but is killed by him in return. 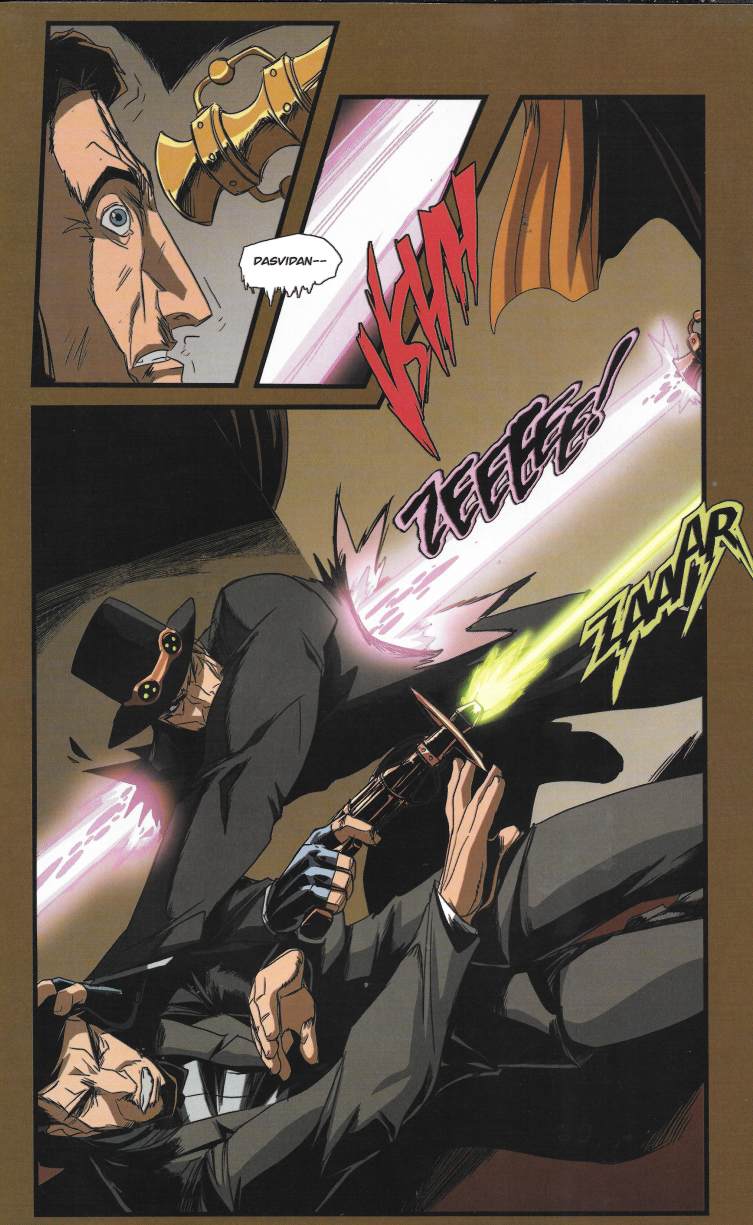 Which, when we see him with his face uncovered, we realize is actually Time Lincoln from the future.

However, in this strange story, if a person touches themselves they are then sent to another part of the time stream, in this case to somewhere where he will evolve into the Time Lincoln who just sacrificed his life to rescue current Lincoln and gather the Team Time Lincoln members thus…. 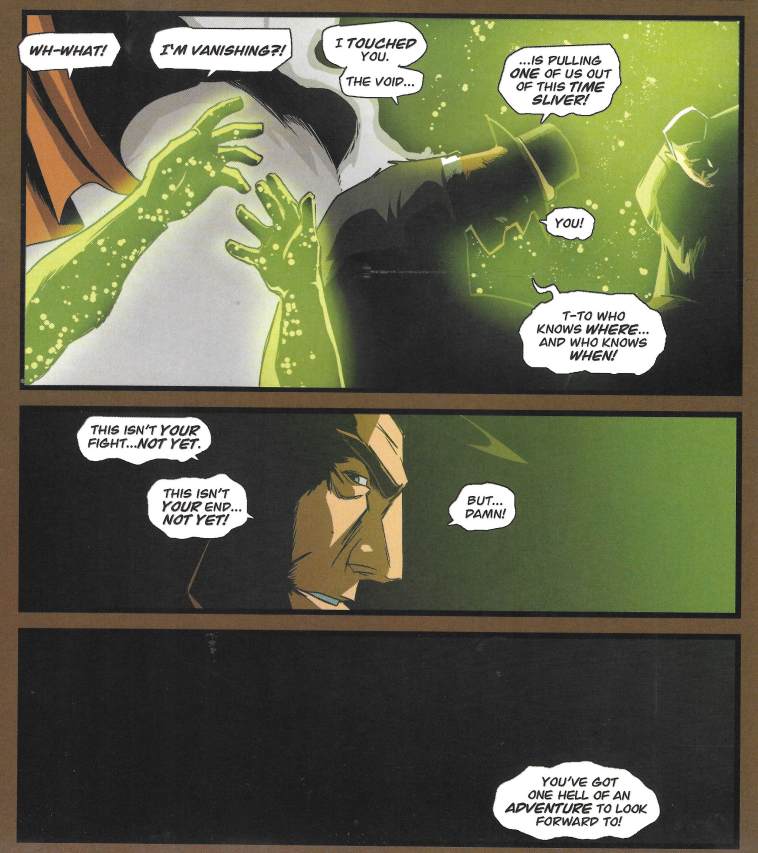 I now remember why I hate Time Travel stories.

Anyway the story ends. Here. Now. With that final panel above. No follow up. No chance of those cooler adventures we heard about coming up as the Lincoln ejected from the time stream works hard to become the time master and ass-kicker shown in Stalin's flashback memories.

Who’d want to read those stories anyway? Not the people that bought this book, I’m sure. They show no interest in the subject matter.

*facepalm*
Posted by SonOfCthulhu at 2:39 AM