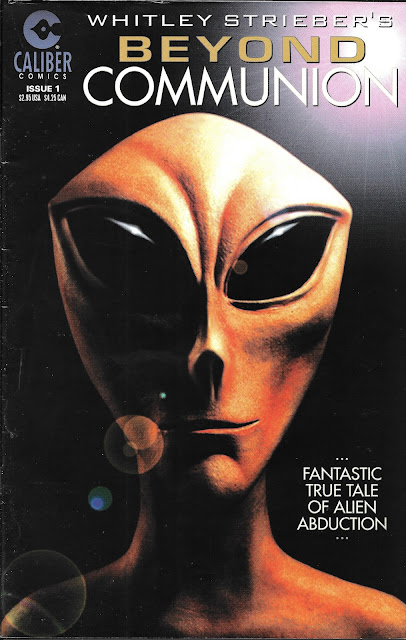 The “Truth” is out there…like waaaay out there


You’ve already heard my thoughts on alien visitation and abduction, so I won’t retread them here. But how else should I begin a review of the sequel to Whitley Strieber’s “true life” account of being abducted by aliens?


I’ve read Strieber’s The Wolfen, a novel about a pack of killer intelligent wolves that live in our cities. I loved the movie adaptations of both it and The Hunger, his sexy vampire story with lesbian overtones. Anything I say about him has to be taken first with the fact that I owe a lot of admiration for this author and what he’s added to my life.


Sometime around 1985 Strieber believes he was abducted from a cabin in upstate New York by non-human beings. He wrote a tell-all story of his experiences leading to and following his “alien” abduction called Communion that became a best seller as a non-fiction work. Note that he does not consider these visitations from UFO aliens, just beings that are non-human.


I, however, consider all of this bullplop and free game as a work of science fiction. He subsequently wrote FOUR follow-up books talking about everything from how aliens (I’m calling it that) might have influenced his childhood and subsequent sporadic contact he now “remembers” happening after he left the cabin.


And this book is a culmination of all the research and thoughts of Strieber on what aliens might be doing even now. I mark that as science fiction and throw it in here for us to review. He even throws down the gauntlet on page one, asking us to “be my judge.” 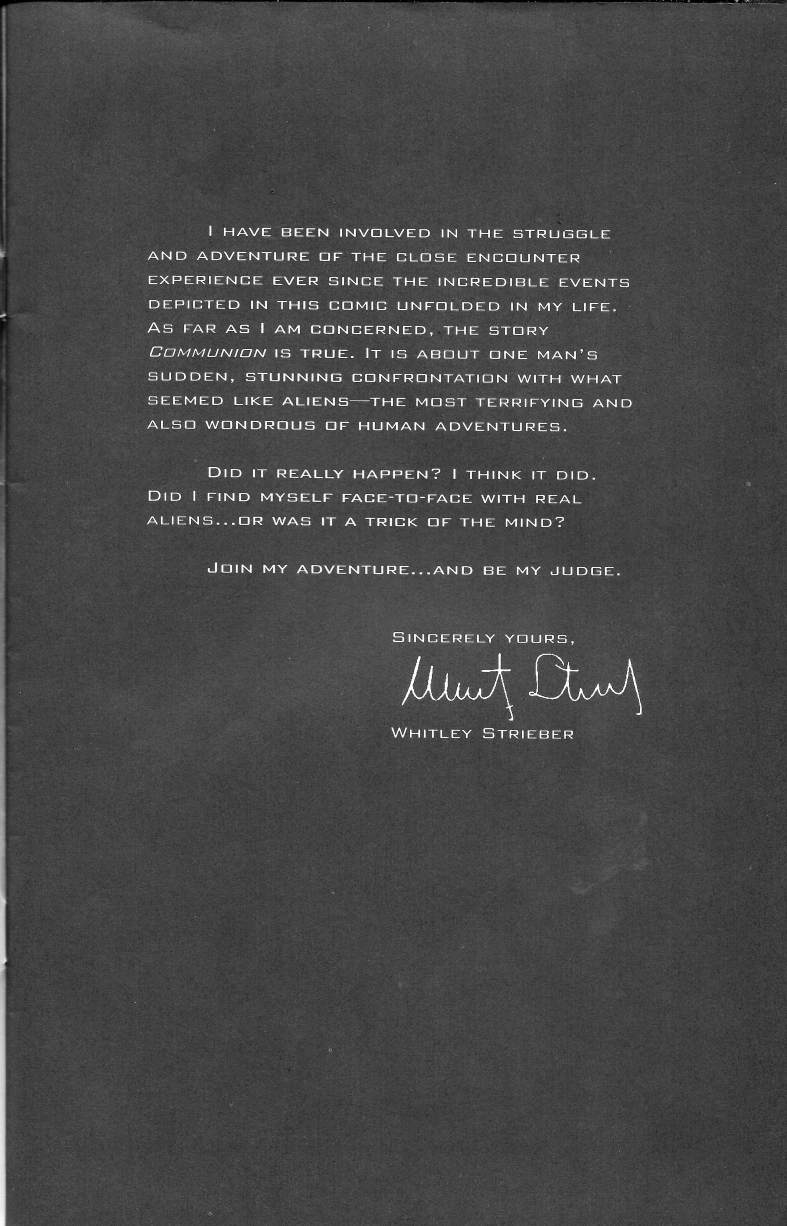 Okay, buddy. You asked for it.


Let’s take a look shall we?


The book has four inkers and is done in a fast and crude style. I don’t find the art appealing nor the story compelling, mainly because this is being presented as truth. I tend to judge that through my own filter way more harshly. But we start with Whitely Strieber as a boy, alone in the forest being scared by an owl. 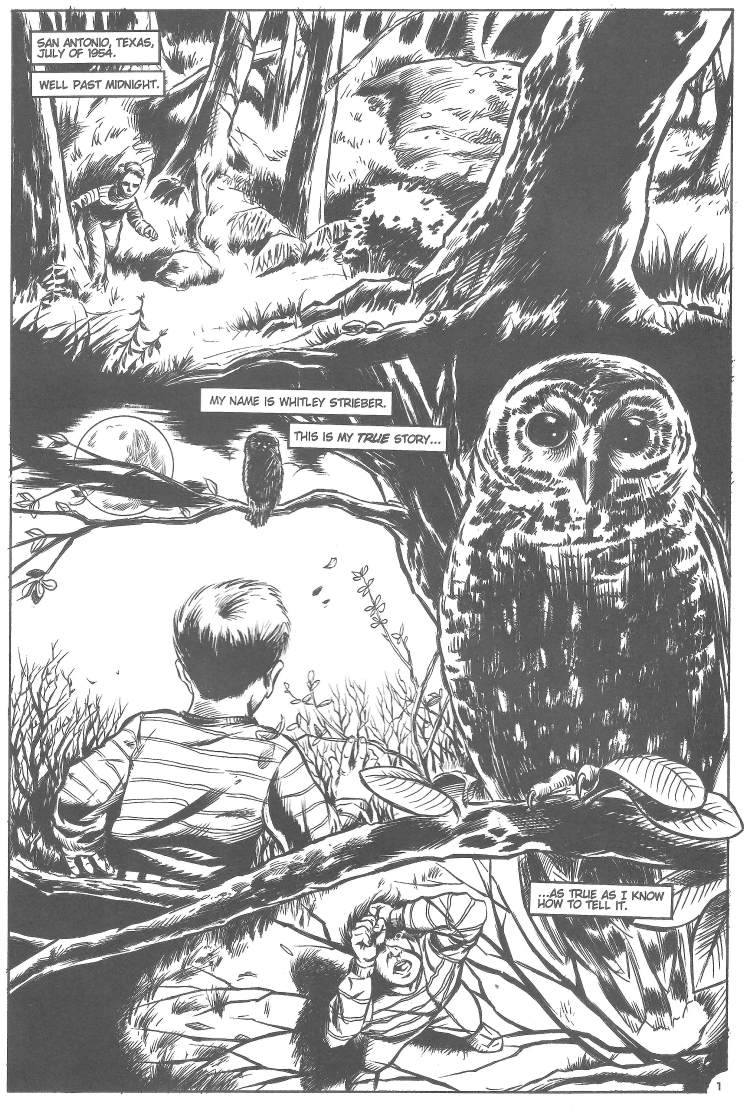 Or is it an owl? Could it be…an alien implanted memory…dun-dun-DUN! 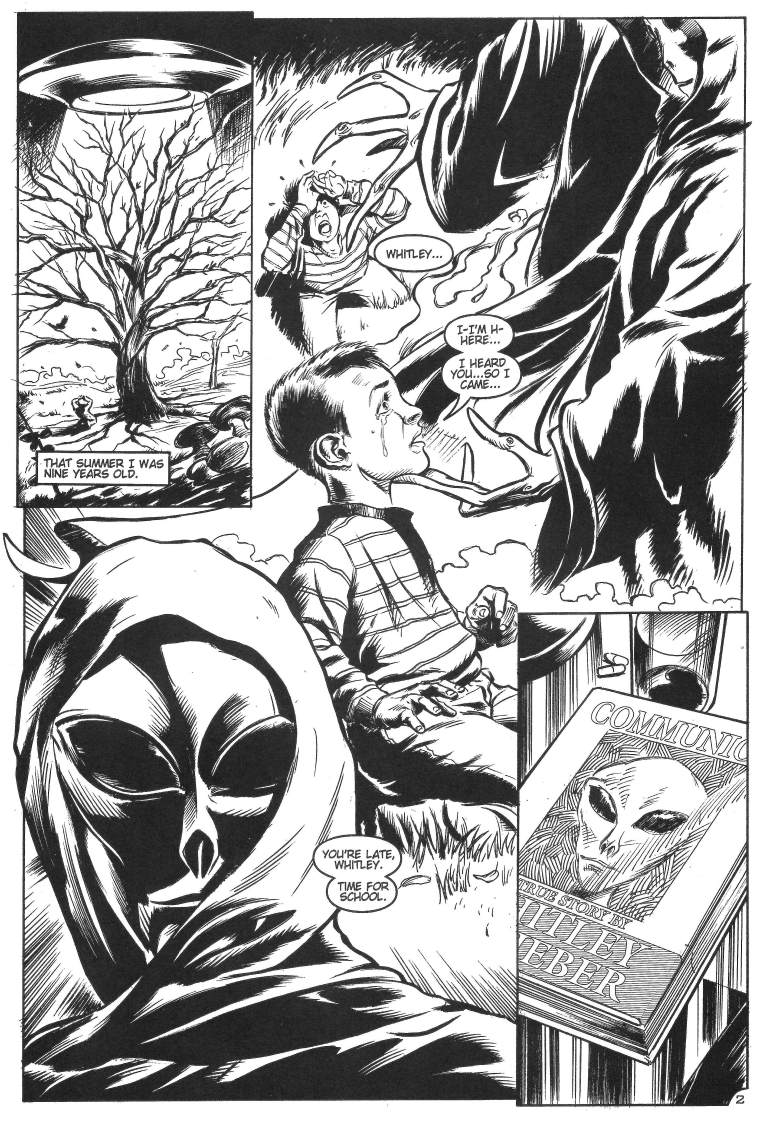 This is a “gray” alien, the same type shown on this book’s cover and the cover of Communion. It is considered one of the most widely recognized popular culture images of what an alien looks like. Also, it looks like the aliens from Close Encounters of the Third Kind, which preceded the book by about ten years. So again I’m left with thinking this is all bullplop.


But wait! The comic gets MORE outrageous.


We shift scenes to Glenrock, Wyoming in the year 1988, one year after Strieber’s book comes out. A woman is awoken from sleeping (after reading Strieber’s Communion book. Either that or this comic is subtle product placement) by a thudding noise.

She looks outside to see something that causes her to exclaim “It can’t be!” 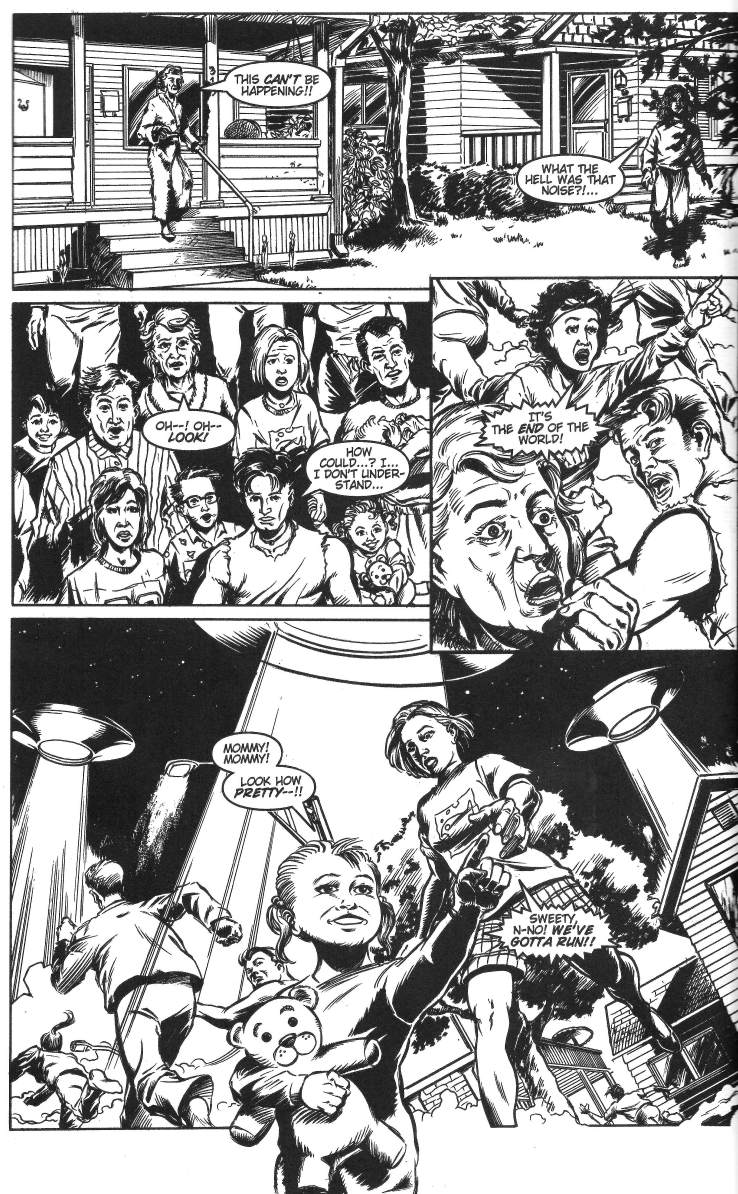 But it is. A gathering a people all looking up to the sky. And she yells at them “Get off my damn lawn.” Okay, maybe not that last part.


No, it’s actually lots of alien spaceships turning on their people-tractor-beams and hoovering up the entire populace of Glenrock. I shit you not. That cover is sitting right by me as I write this and I cannot HELP but snicker at that blurb that says “True Tale of Alien Abduction”.


Okay, maybe they don’t abduct them, but Strieber is implying that. And worse yet, if you look this event up, you find it comes from Strieber’s book Breakthrough, the Next Step. His sources, from what I can find, remain unnamed. Outside of UFO blogs that cite him as their source, this event does not appear to be recorded. One web page describing the event even went out on a tangent that there was video of a gray alien passing near Barack Obama as he was being interviewed on TV in Nairobi. I mean…that’s just nuts.


Brings a whole new problem with Trump building his wall to keep out illegal aliens, is all I’m saying.


From here we move to Strieber describing the series of “nine knocks in groups of three on the cabin wall” of his abduction to an incredulous Larry King. 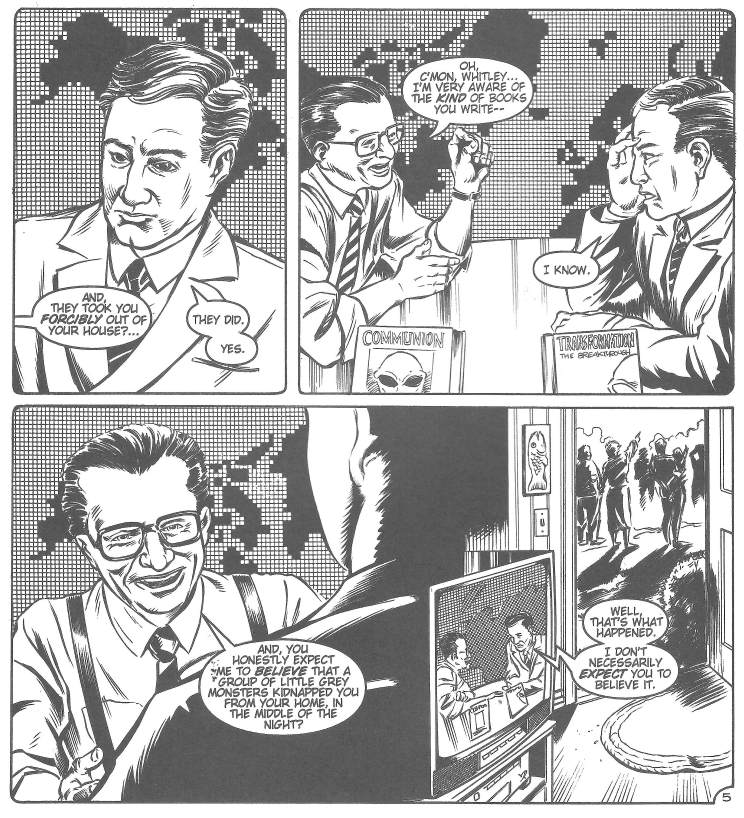 Then back we go to Glenrock and the creepy spaceship lights. He has residents say things that support his “we’ve all been abducted as children” theory, and the we intercut to him saying he has no idea what the alien’s intentions are. 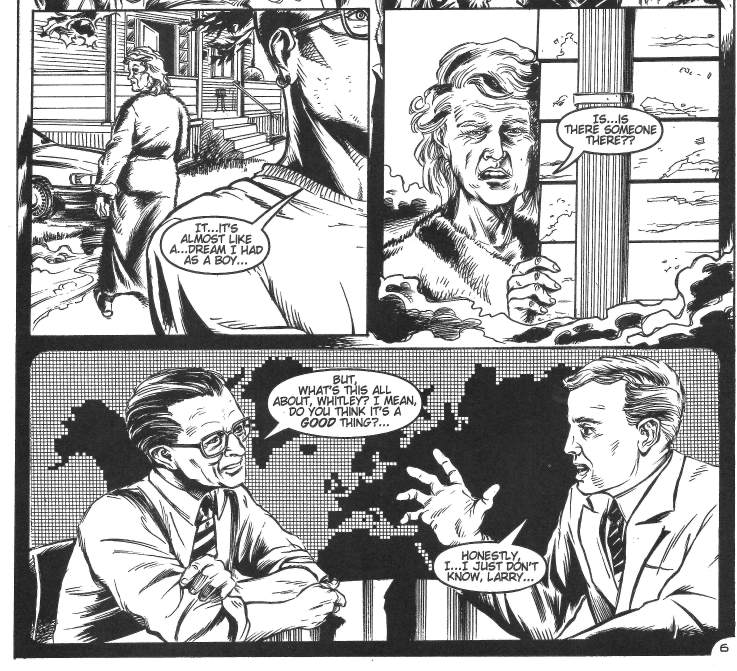 And then we go way farther than his book states about the Glenrock event to produce actual aliens who appear around the old woman we saw awoken earlier. 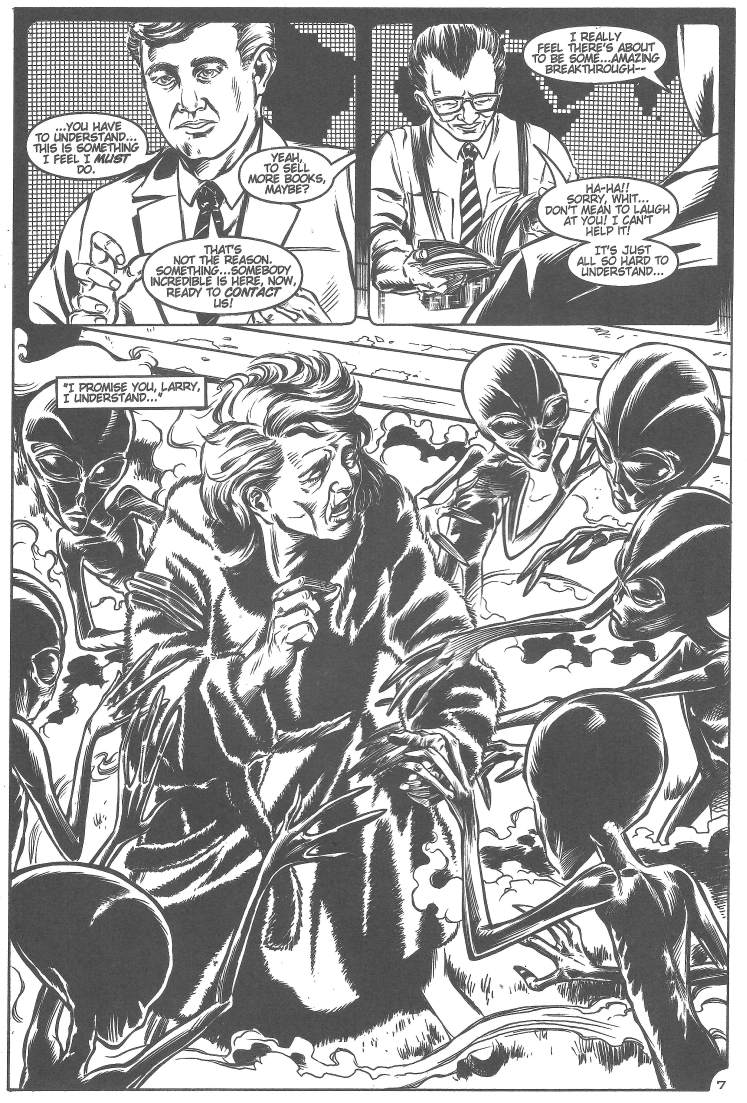 At least we get a neat Alien splash page. I can dig that part of the art. 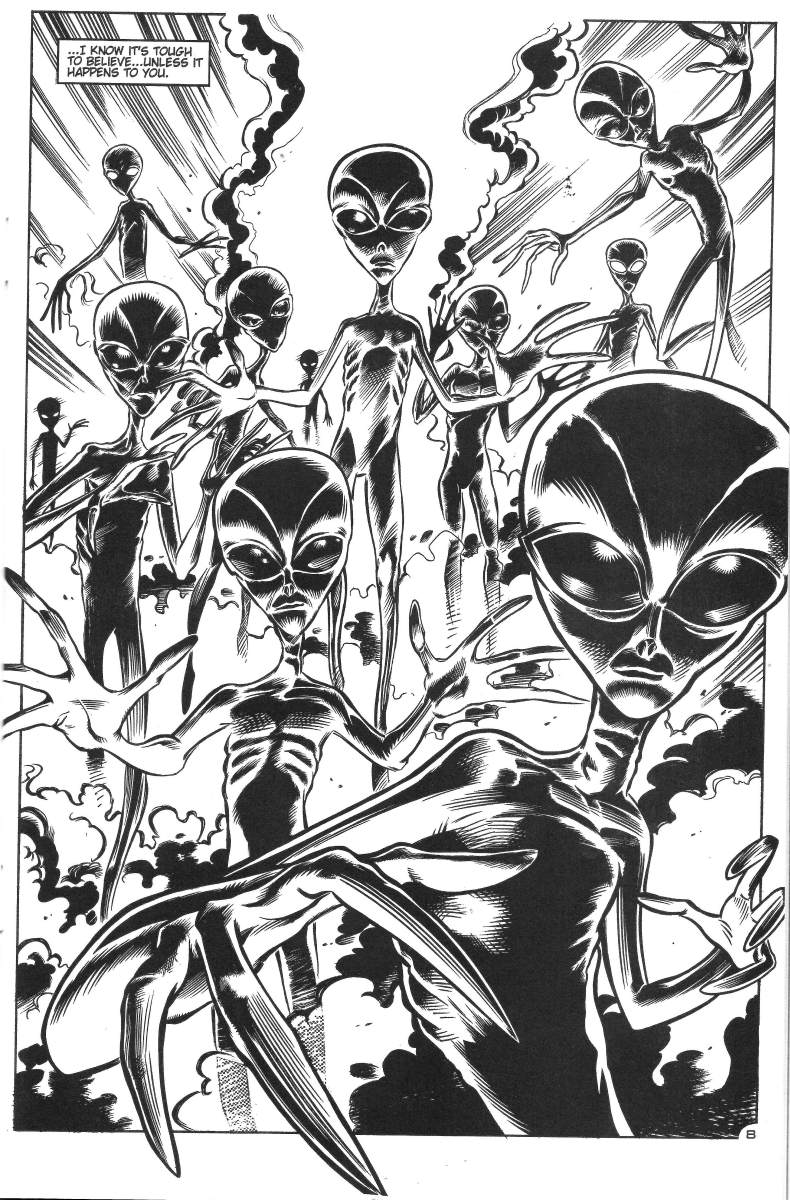 But I think that is as good as we are going to get. Because Strieber is writing this as the gospel and he being a true believer, it means he won’t go so far as to speculate if the motives of these gray beings are good or bad. So we don’t have a resolution to the biggest unanswered question in the book: Why are they here? 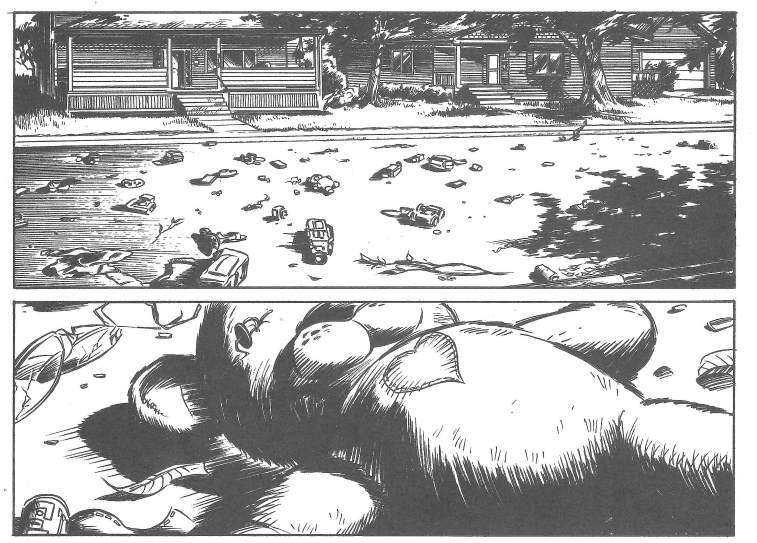 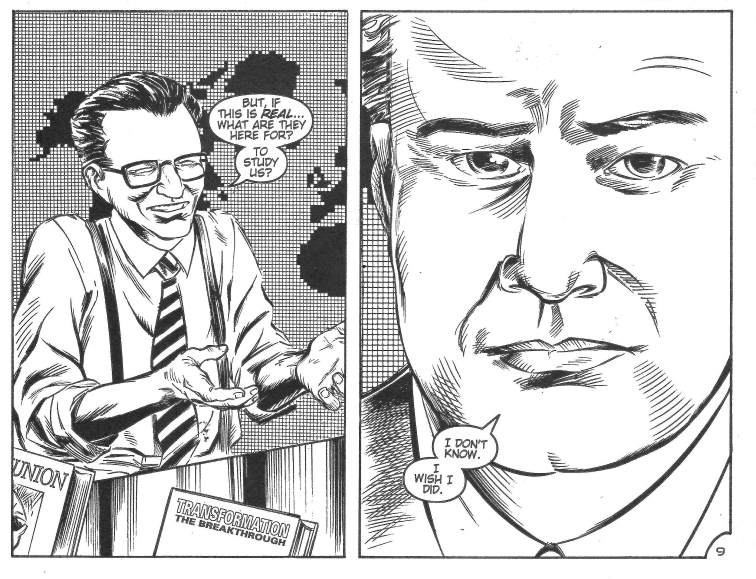 I wish you did too. Or at least decided to assume one way or another if the invading force of aliens were hostile or benign. Strieber speaks with his editor about his fears and then produces …  A VIDEO OF WHAT HAPPENED IN GLENROCK…(off to youtube I go to find said video) 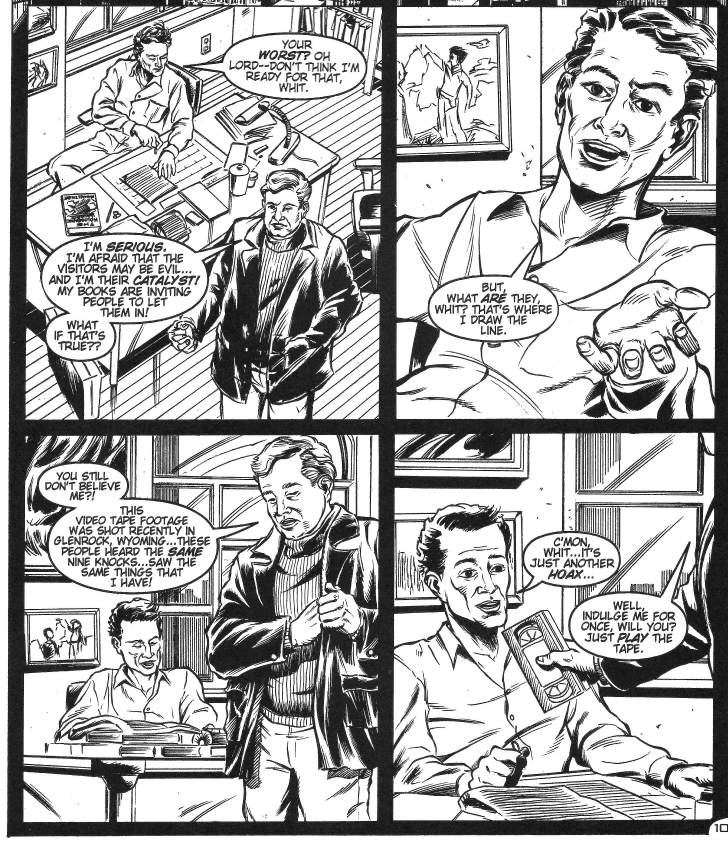 As I expected, NOTHING. (well, this cool lightning video, but that’s not aliens.)

This supposed tape that I can’t find on youtube shows this: 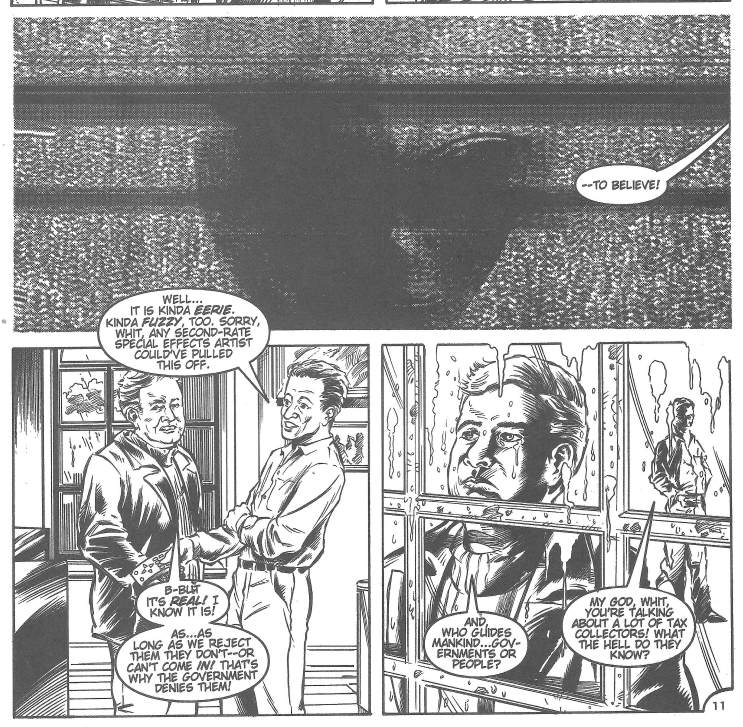 A blurry, out of focus “something” that even his editor says looks faked. And Whitley is just full of the X-files mind set, it sets up a huge list of philosophical questions that the book never once comes close to even thinking through let alone developing an answer to…it’s just a mess.


The thing that Strieber doesn’t tell his editor, he confides to the audience is this odd thing that happened while he was at the cabin in August. Strieber wrestles with his feelings about the aliens and whether he should be telling people to avoid them or aid them. It becomes kind of a running thing for him, this fear-laced uncertainty. 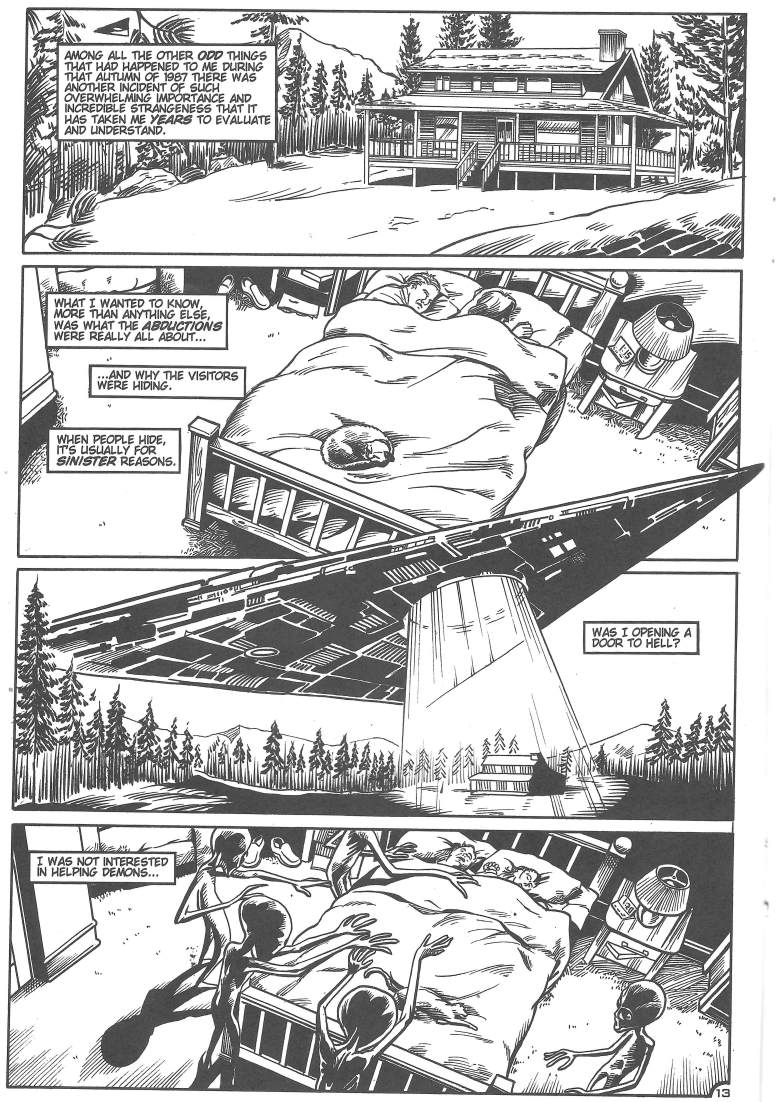 Now what I think happened with Strieber is all hallucinogen related. Especially when we get to him seeing things like this: 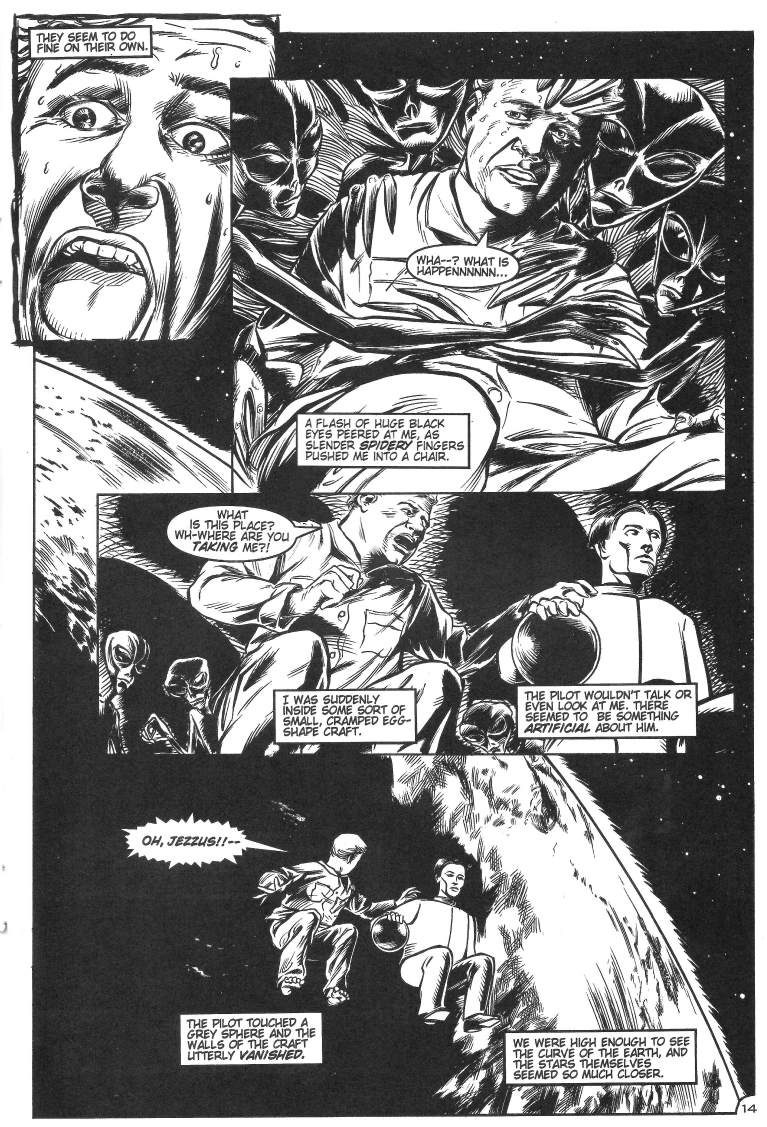 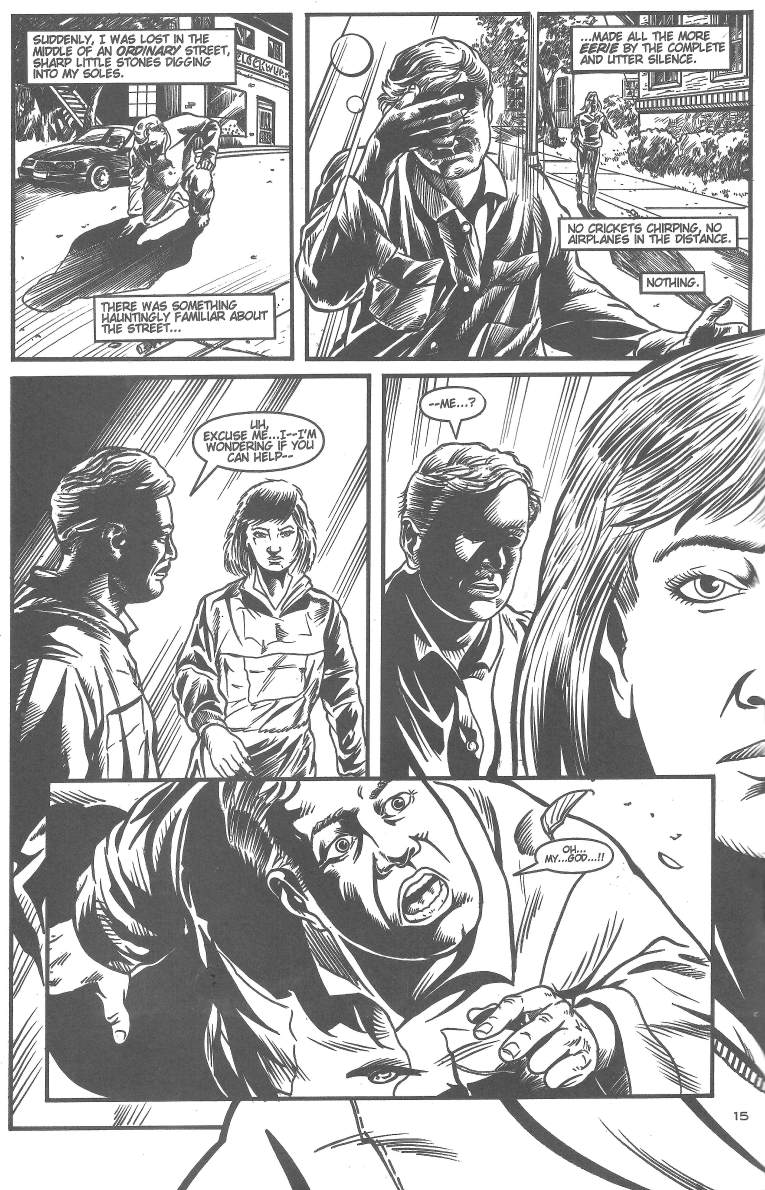 These don’t seem like repressed memories, but more like highly imaginative bad acid trips. It is distressing in a way to discover someone’s hidden paranoia, which is what this greatly feels like. Strieber has allowed his inner demons to conjure up this fabrication and lay it over reality in such a fashion that everything is a threat. 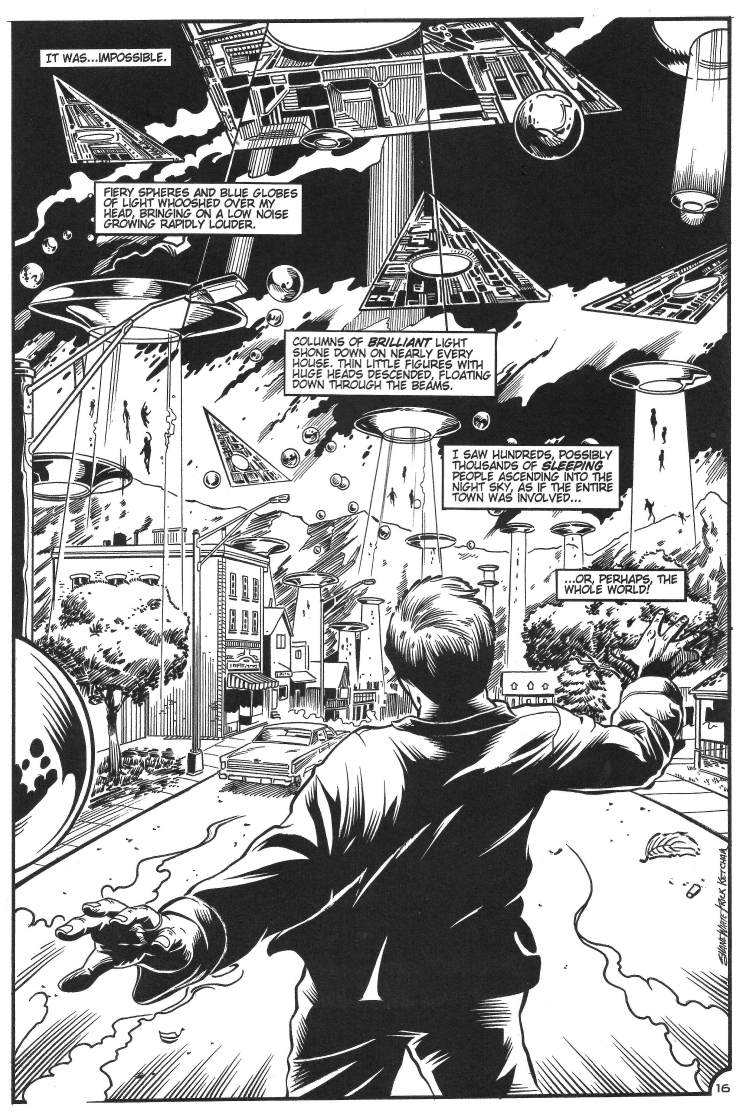 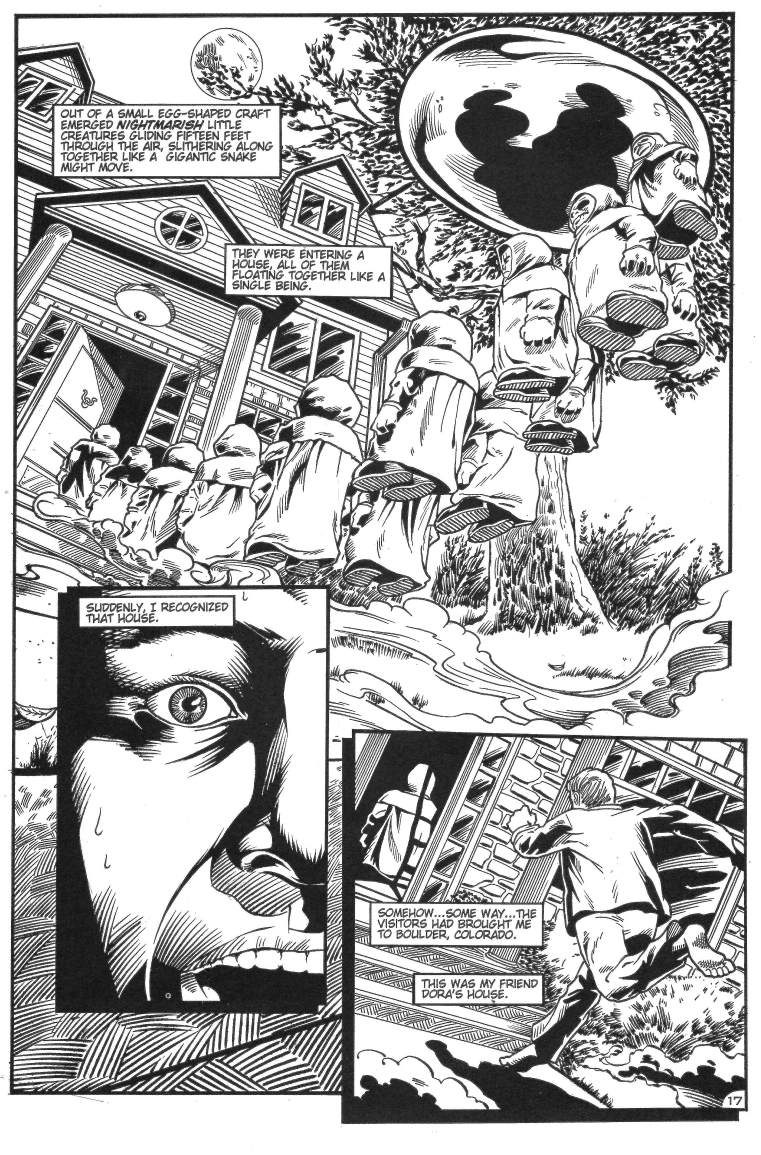 …of a young lady named Dora. An explorer, by trade. She had a pet monkey named Boots. And Strieber has to save her from the alien floating hobbits. 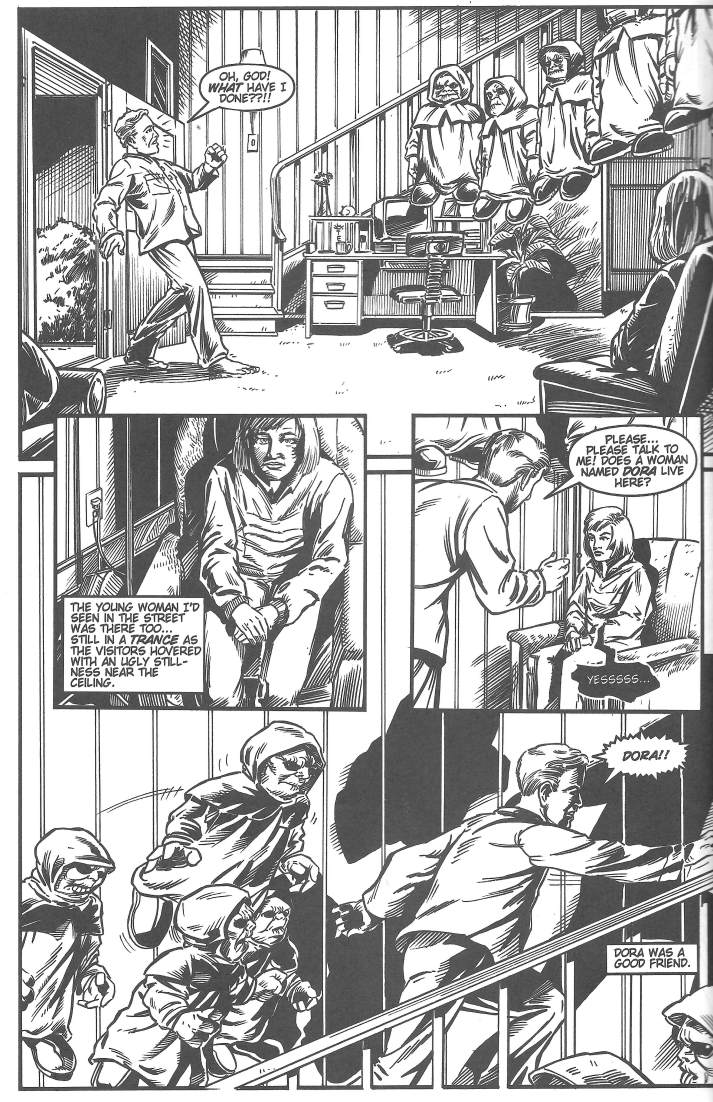 But when he reaches her, she’s not in danger. Her daughter, however, is screaming down the hall. Whitley races to the rescue. 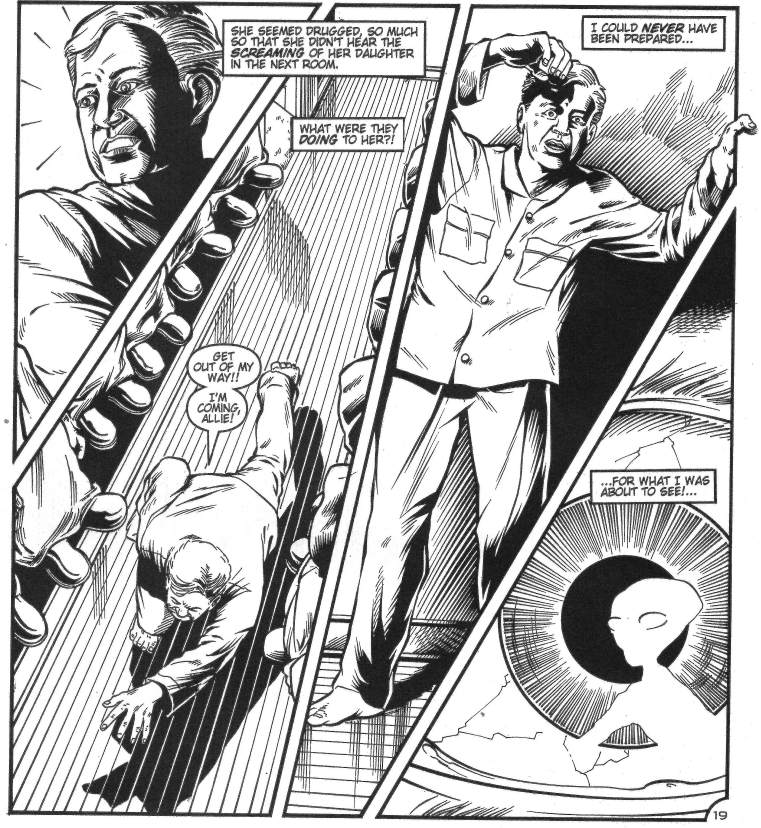 Only to find her spine being adjusted by a spiderlike Gray alien chiropractor. See what I mean about this being a bad acid trip? 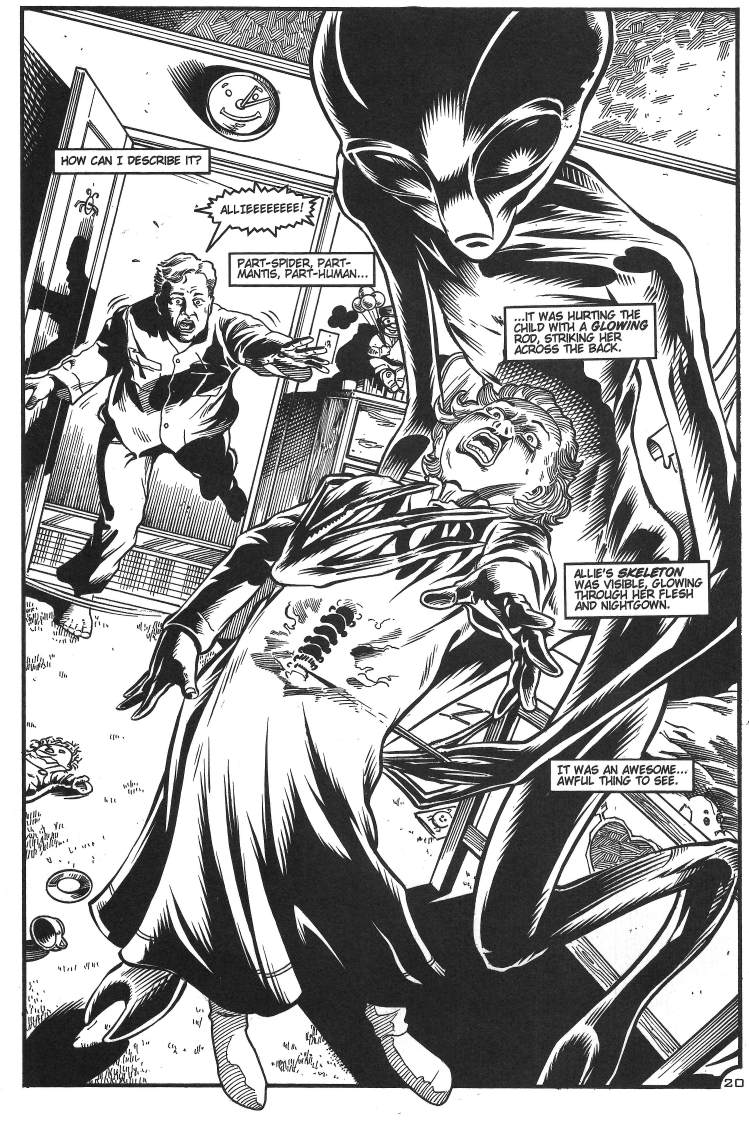 The alien stops Whitley in mid-jump, leaving him floating while he returns the child to a zombie like Dora. And as she leaves it becomes apparent that Whitley is the Gray’s next patient. 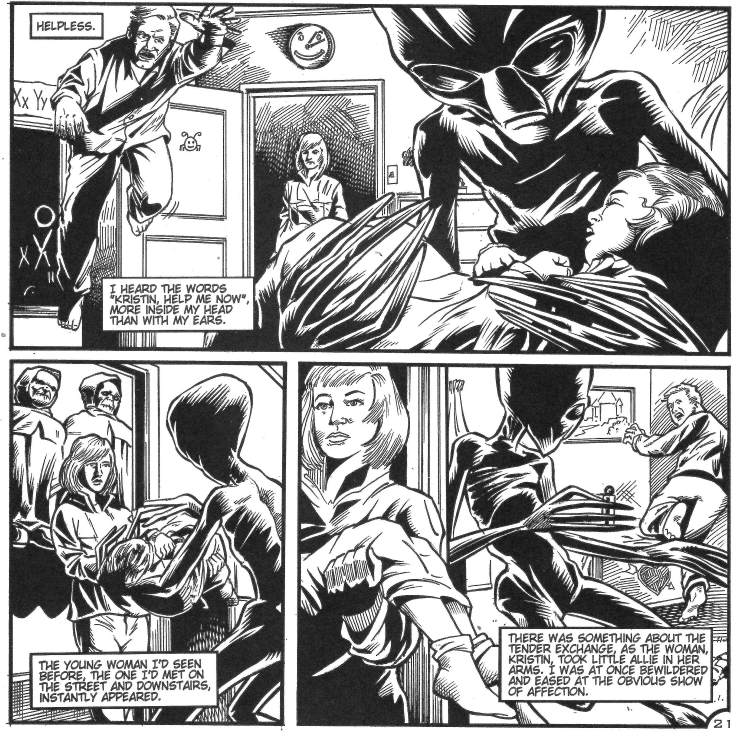 And whatever it does to Whitley is wiped from his memory and he’s left naked in a ditch like a hung over sorority girl the night after the big Kappa Alpha homecoming party. 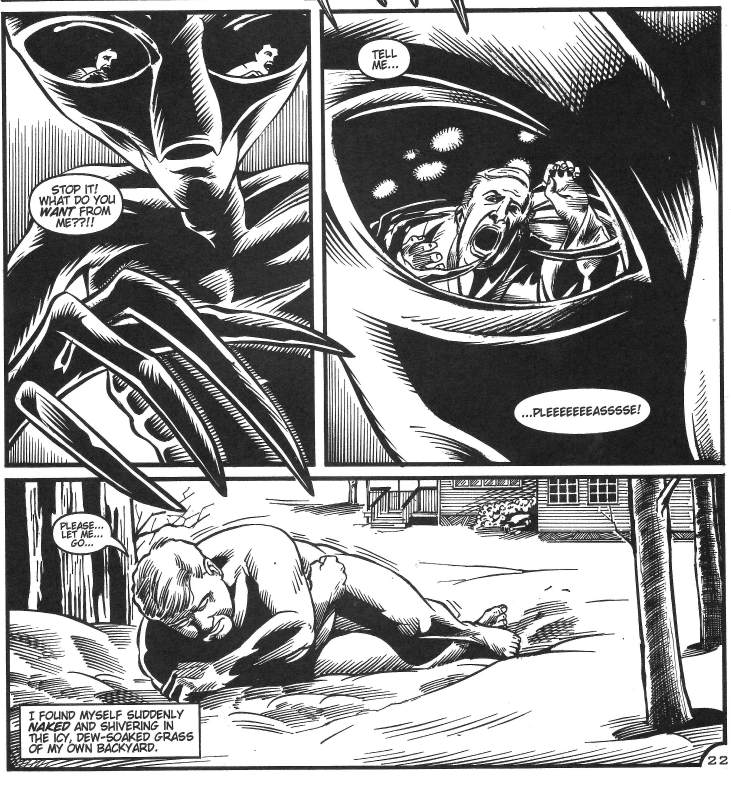 Arriving back home that way freaks out his wife a little, but then Strieber claims she too encounters the Grays as they aren’t quite done with him. 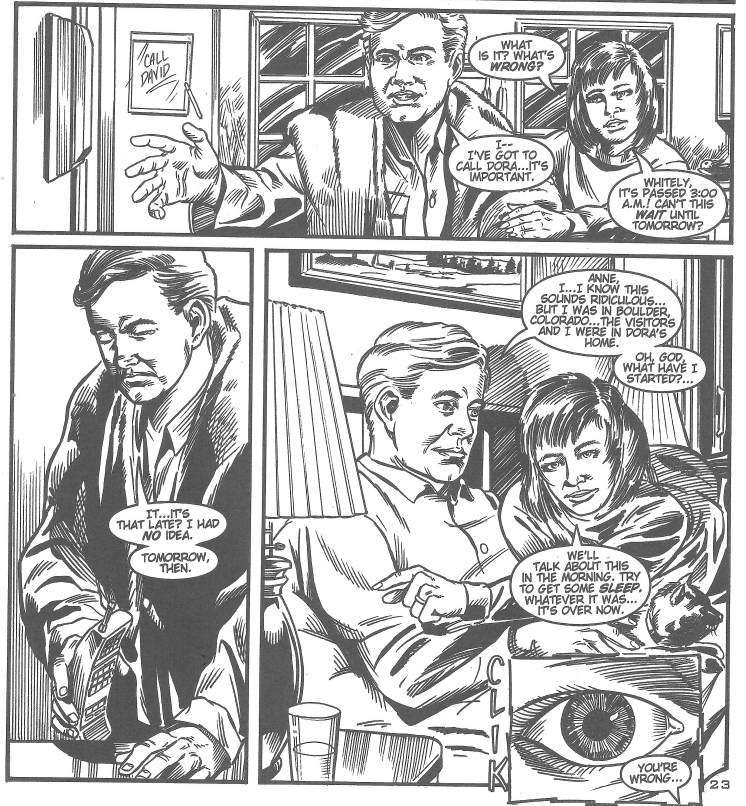 He sees one in their room and his wife makes an admission that I kind of wonder if it doesn’t have another meaning. A meaning like “I didn’t see it but I’m going to humor you because I think you’ve gone round the bend but I still love you and Oh My GOD! Your psychosis is REAL and I’m going to have to deal with it.” 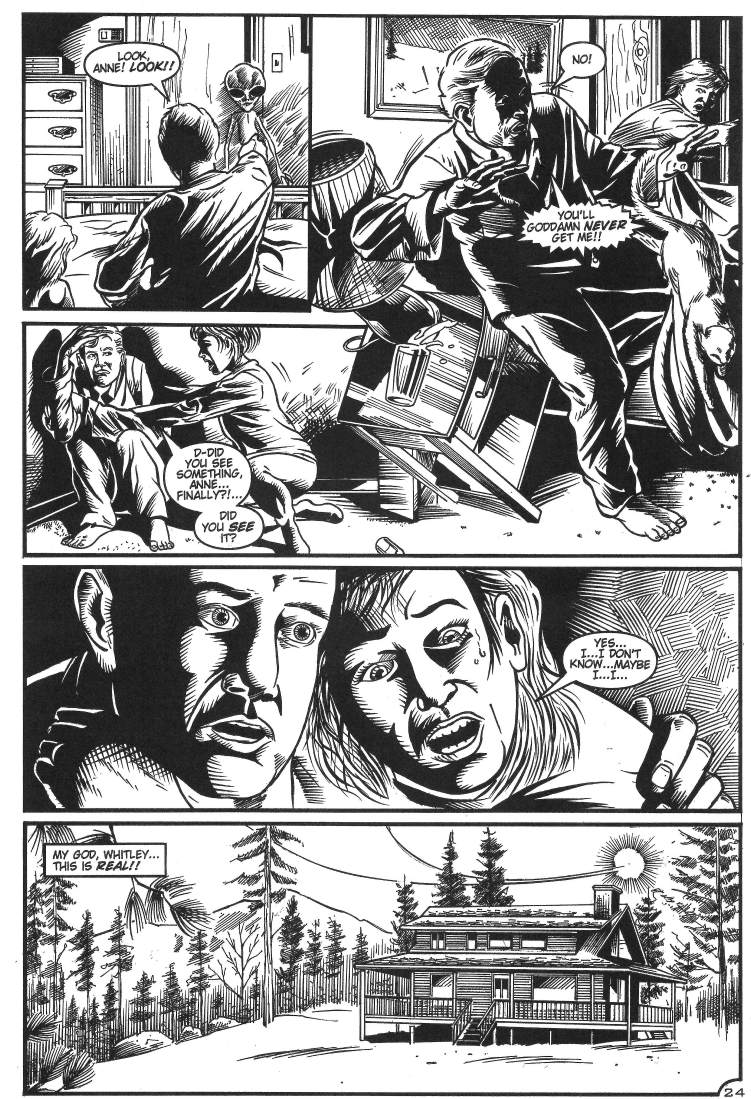 Strieber sees it as confirmation that all these mind fantasies are true.


That’s where issue one ends, posing all sorts of questions that I feel it will never truly answer. It is a load of crap to me, but I don’t mind it. I mean, the book has some good company here in the place where all crap has to land: the crapbox.


OH! And if you want an enjoyable telling of Strieber’s abduction, rent the movie version of Communion. It stars Christopher Walken, which guarantees interesting viewing.