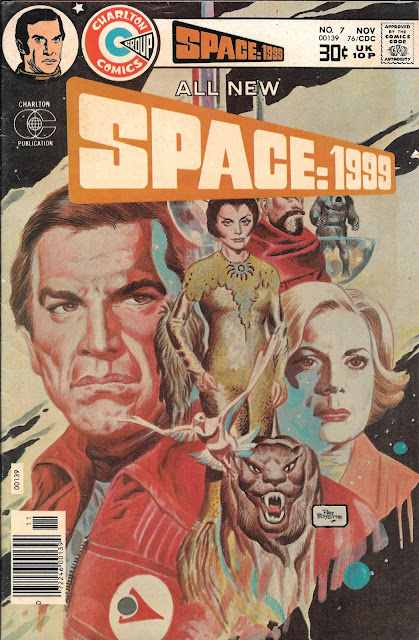 I never feel the need to establish my geek cred. I owe that to a couple of things: Starlog magazine and Space:1999. 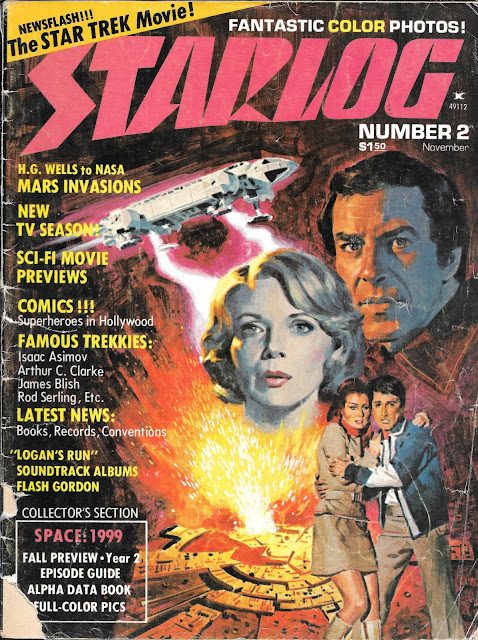 That is my actual copy, and YES it is in the WORST shape imaginable. That’s because after buying that issue fresh off the stands, I read it non-stop all though middle school. It was my first introduction to a science fiction magazine and I begged Mom and Dad to get me a subscription, which they kindly did. Up until I left home, I had a collection of Starlog that ran for several years, but moving into a cramped apartment meant surrendering certain luxuries.

If you are like me and had to give up your copies, you’ll be glad to know you can still visit all those issues virtually at this LINK. And theirs are in much better condition than mine is, too.

I loved Space:1999. The spaceship design of the Eagles, the weird British feel of the show, and the initial premise of our making the moon a nuclear waste dump causing a cataclysm that sent it and Moonbase Alpha hurtling off into uncharted space were all too alluring of a space fantasy for me to not fall for. As wellas that disco-electronica-funk thing it had going on.

And by its second season it offered something that Star Trek: TOS didn’t: a permanent sexy woman alien. That would be the beautiful Catherine Schell playing the exotic metamorph known as Maya. 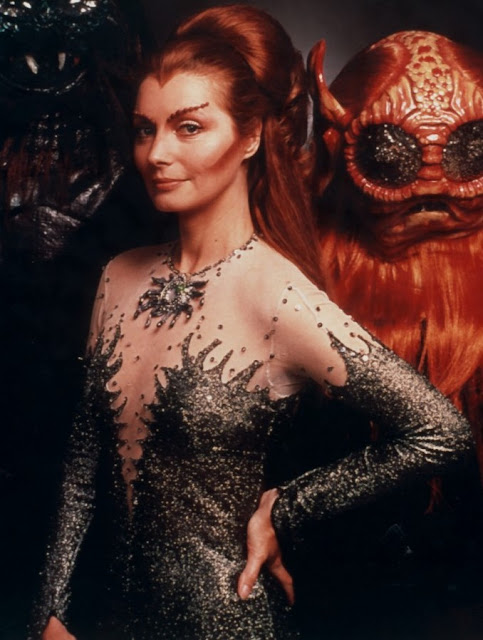 Don’t know who that is? Well, you’re in luck because this issue (the last in Charlton’s short stint of Space:1999 comics) happens to be her “origin issue” of sorts, replaying the events of the first episode of season two, “The Metamorph”.

We start off pulling everything directly from the episode, with Barbara Bain’s Helen character filling us in on what Moonbase Alpha’s crisis of the moment was. That was kind of the neat part of the premise – since Alpha wasn’t a space station expecting to go on some long voyage, they were continually in need of something or other, which lead to the crewmembers investigating and having several adventures on the planets they would pass. Here we have two Alphans in an Eagle scouting a nearby planet for the supply restock of the week. 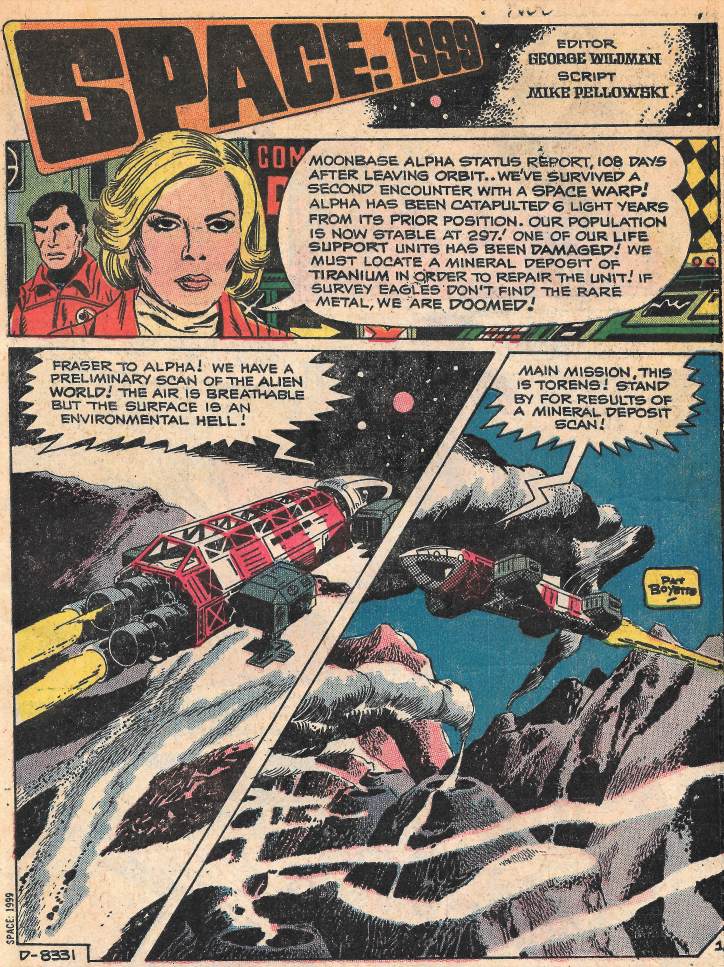 This is the only issue that Pat Boyette was involved with. The first two books were Joe Stanton and the following four were John Byrne. I had one of each run growing up that I bought from a Woolworths – Woolco in Ridgemar Mall. Yeah, I can pinpoint the exact time/place those came into my young life. Too bad I can’t remember when the exited, but possibly about the same time as my post-college clean out. 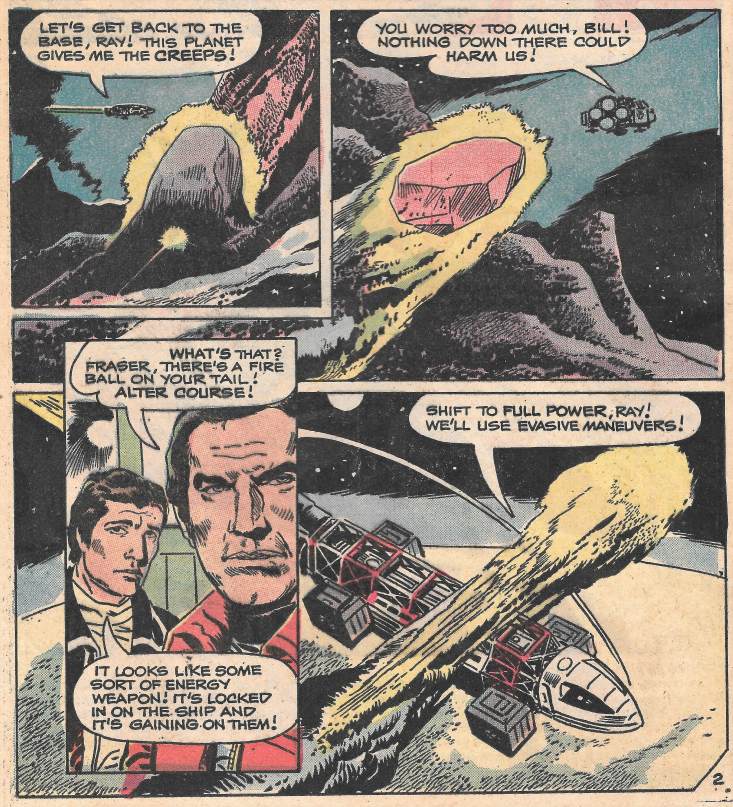 The crew of the Eagle detects the trianium that Alpha needs but as it makes its return trip, a rock takes off from the planet's surface and tries to ram them. This is also why I liked Space:1999: weird-ass, unexplainable shit happened all the time and we NEVER got a real understanding of the how or why.

I mean, yeah there is someone on the planet who doesn’t want the Alphans to leave and in the next scene he uses a cloud to capture the Eagle and its crew, but “flying rocks?” Can anyone tell me how this guy can make rocks fly? And stuff like this was kind of the tone of the show. Weird creepy aliens would have odd superscience powers that would give the Moon an atmosphere or cause a baby grows to adult age in a matter of days. It was plain nuts, but felt like that old adage of science being indistinguishable from magic once the gap between technological levels becomes too vast. 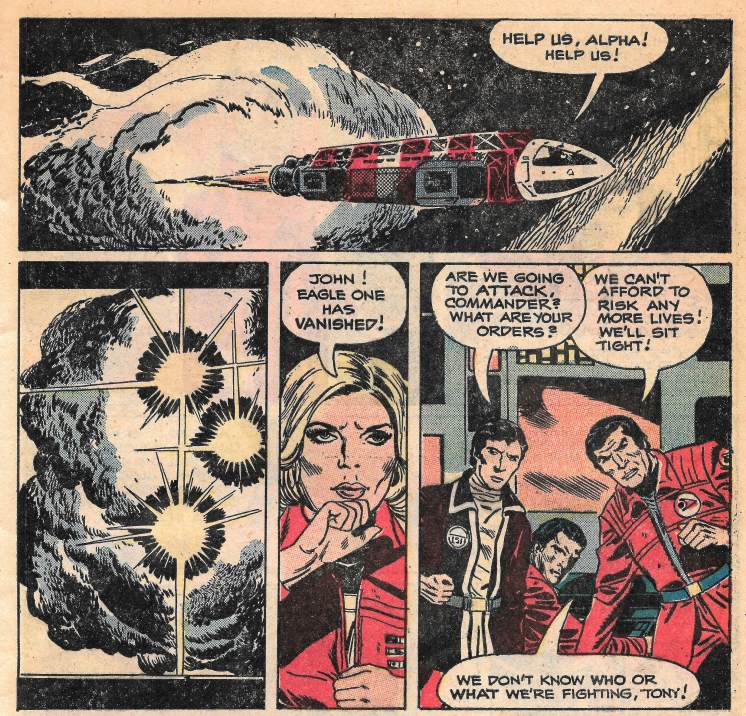 Which is really taken to the extreme that the very next page had the Eagle spaceship disappearing because it came in contact with a space cloud. Yeah, magic space cloud.

Followed by the standard introduction of alien baddy of the week, a guy by the name of Mentor who lives on the planet Psychon. 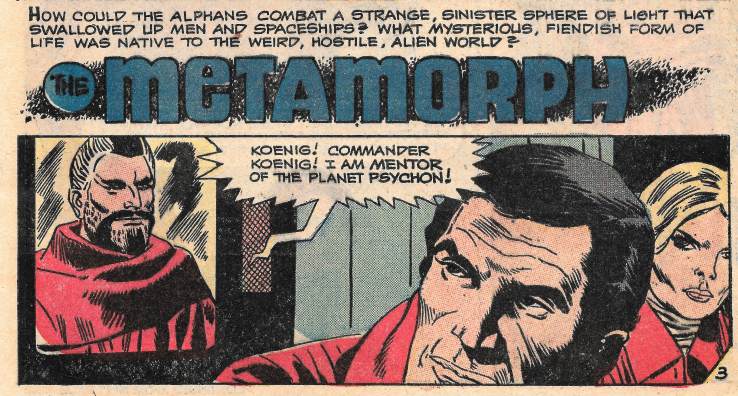 And before you take those naming cues to mean anything, there is absolutely nothing about this guy that says “I’m going to steal your brain” at all. Except the part where he threatens the lives of the Alpha pilots if they “invade” his world again. He does allow Koenig to meet him in space to pick up his men. Seems he doesn’t want Koenig near his planet for some reason. And he even agrees to giving them their rare mineral. What a swell guy. 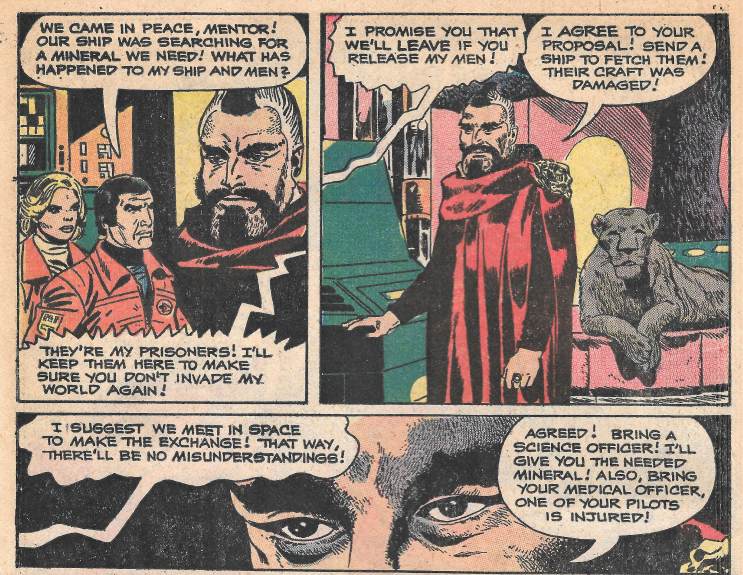 As the viewer turns off, he speaks to the cat-thing behind him, which turns into his gorgeous (well, on TV anyway) daughter Maya. 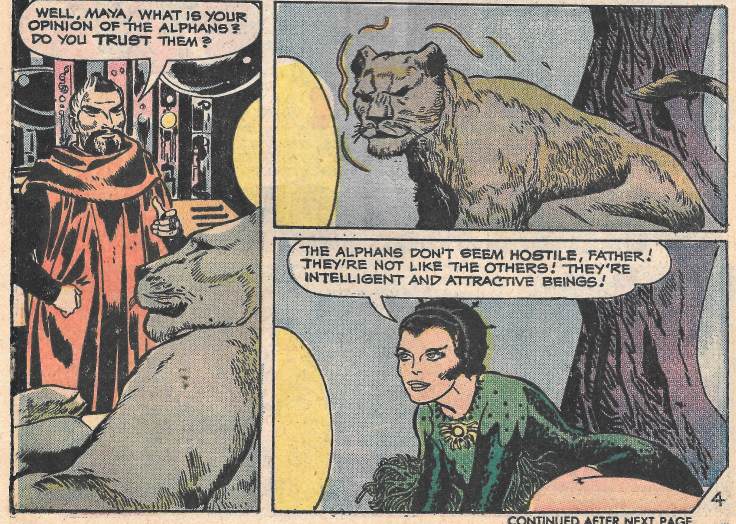 She’d give Seven of Nine a run for her money.

Anyway, Mentor chides his daughter for using the secret of molecular transformation frivolously and then sends her away so that he can get to “work.” And that work appears to be emptying the head of one of the Alphan pilots using his brain transfer unit. Surprise, surprise!

When Koenig reaches the rendezvous site, no one is there to meet them. An alien craft finally approaches and then tractor beams their butts down to the planet’s surface. The Alphans discover a graveyard of spaceships from Mentor’s prior victims, while their captor sucks the mind out of one of the prior Eagle's pilot’s heads to feed his supercomputer “Psyche.” 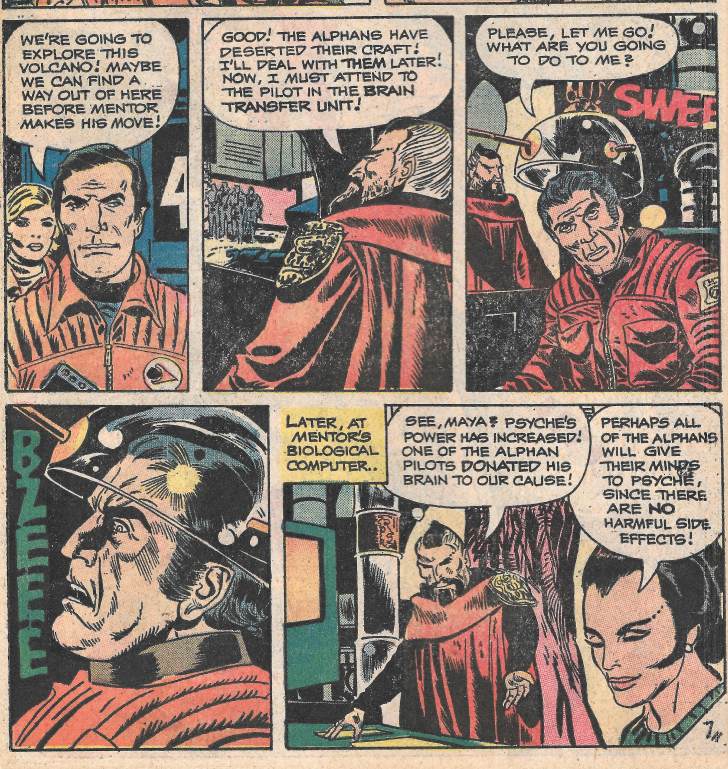 Maya doesn’t know the process renders the people into zombies that Mentor uses to work his mines, which is what the Alphans have just discovered. 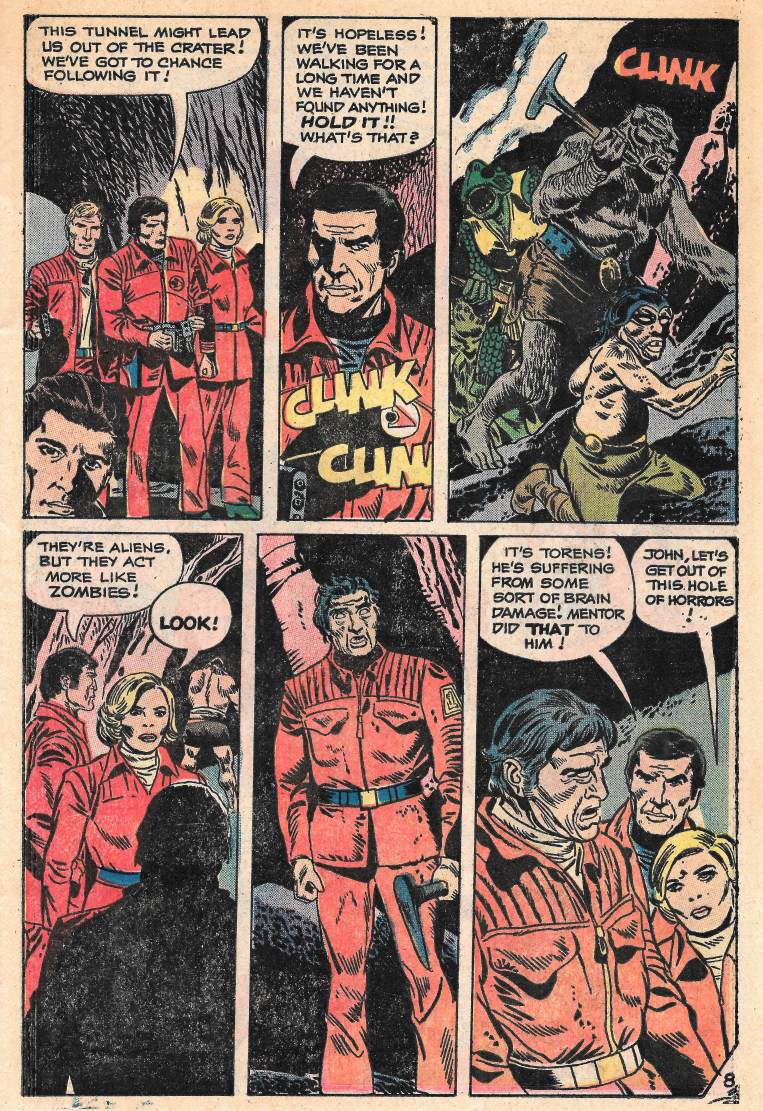 Of course they are all captured so that Mentor can use them to force the all of Moonbase Alpha to become his private stock of brains to suck. 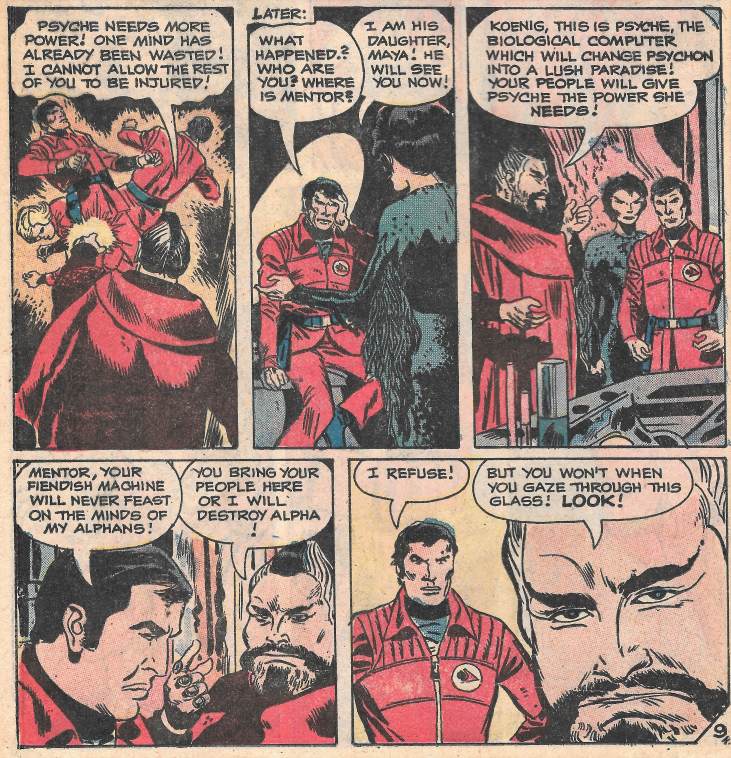 Koenig uses a codeword when transmitting the request to Alpha to relocate to Psyche and they send a robot Eagle to blow up Mentor and the captured Alphans. This upsets Maya greatly as she doesn’t know her father’s machinations. 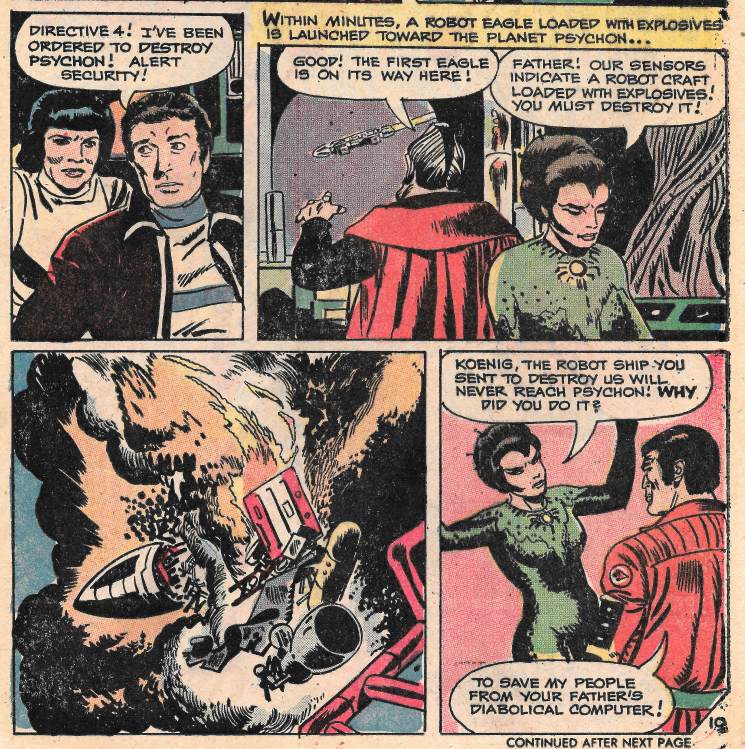 Suspicious that Koenig might be telling the truth, Maya transforms into a bird and discovers the zombiefied mine workers. She releases the Alphans and they battle their way to the captured Eagle. 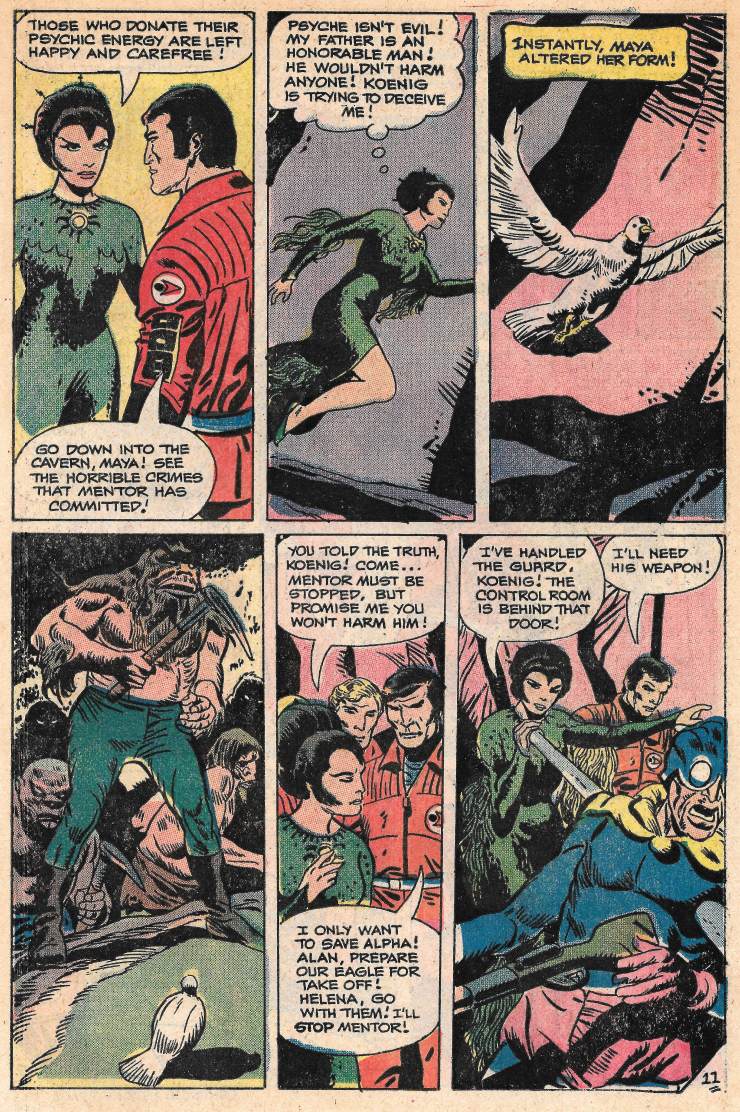 But not before Koenig destroys Psyche, making it impossible for Mentor to use the brain machine on anyone else. Psyche goes up in flames and is literally going to blow up the entire planet, but Mentor won’t leave. Koenig forces Maya to escape with them, not letting her transformations intimidate him. 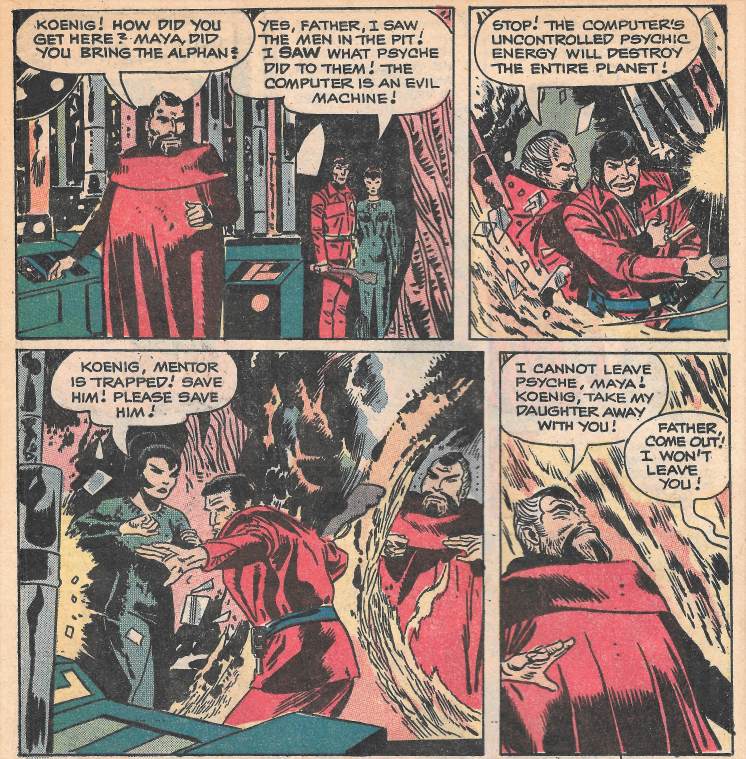 In the end, he convinces her to join him and they escape with the others in the Eagle. 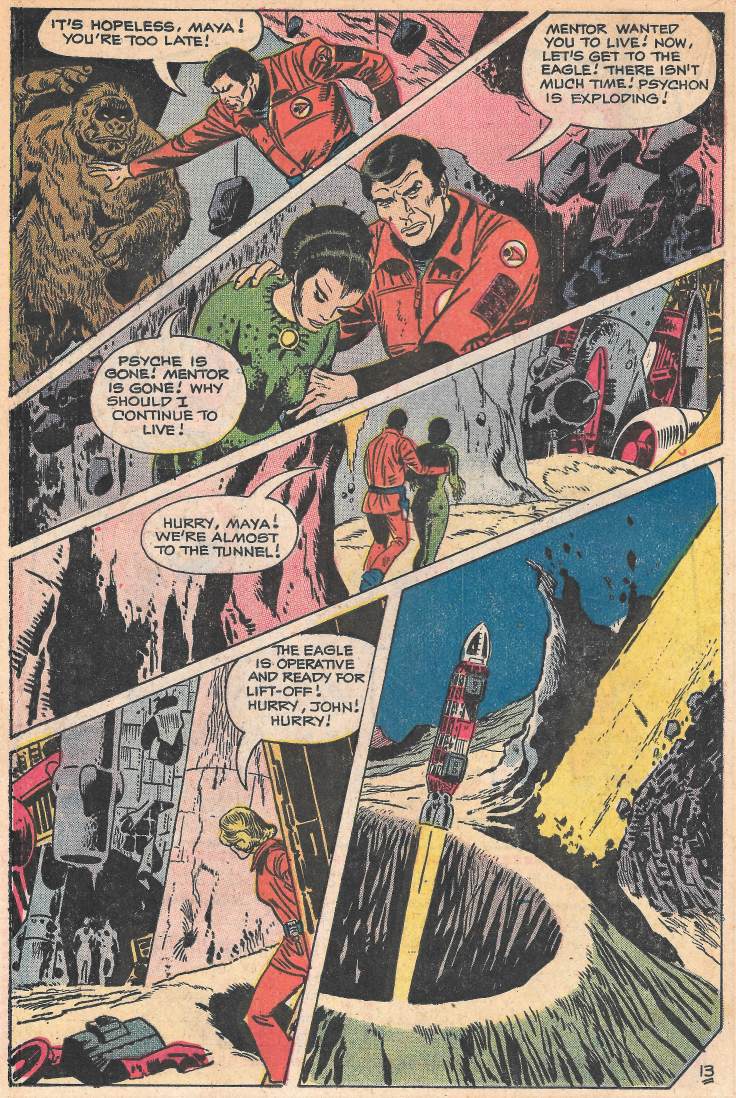 And thus Maya becomes a part of Moonbase Alpha from this point on. A decent adaptation, but a far cry from what Stanton or Byrne had done with the same setting. It isn’t awful art, just not up to the bar the previous artists had set.

Next up is an original tale that gives Maya something to do while everyone else stands around. 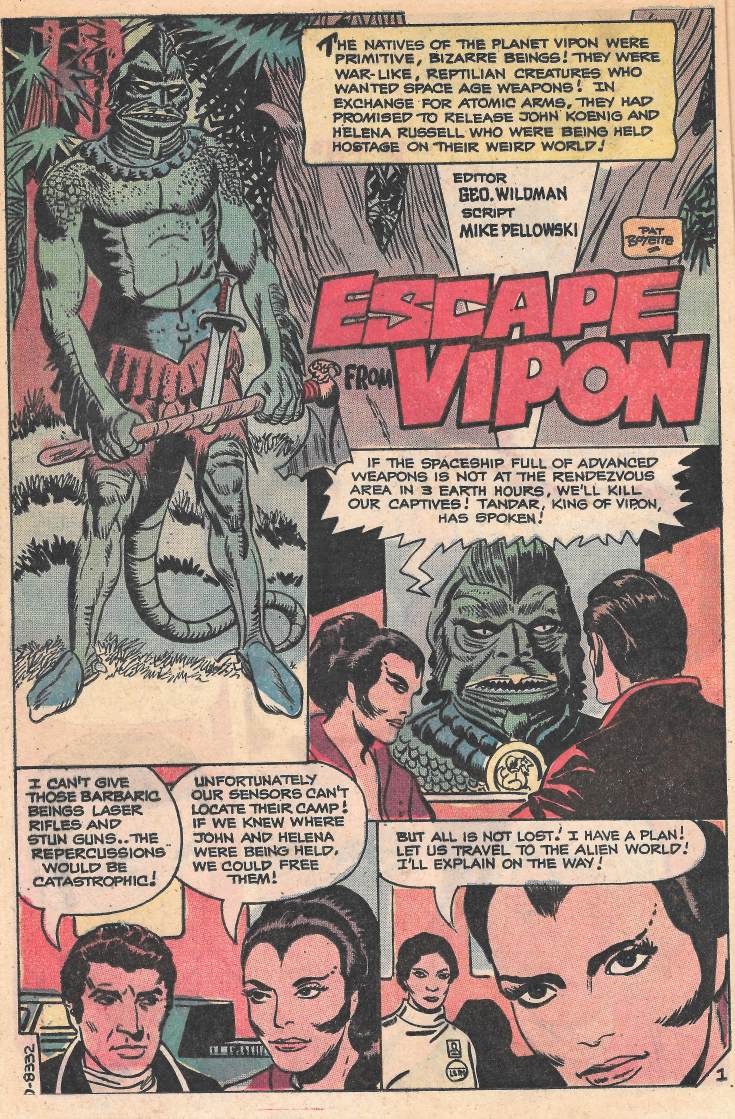 This alien race of war-loving lizard people have captured Koenig and Russell and are demanding a spaceship full of weapons or they will execute them. Tony is at a loss for what to do, but Maya has a plan. 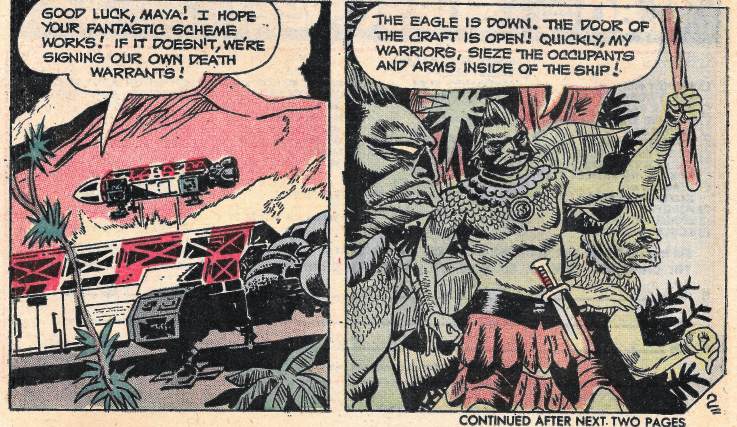 They take a second, empty Eagle down to the planet. The Vipons think this is their weapons delivery and storm the vehicle. Tony is captures while Maya makes like fire extinguisher. After the Vipons leave she transforms back and the flies after them by becoming a bird.

The Vipons stash Tony in the same cave as their other two captives and Maya, as a tiny insect, annoys one of the guards. 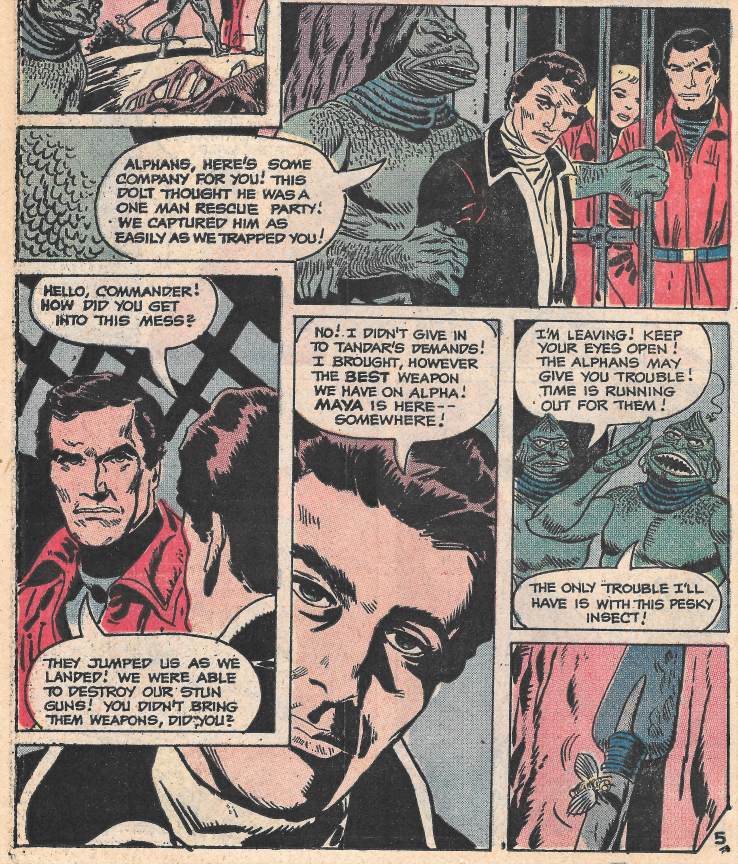 She transforms back and knocks him the heck out, then assumes his form and frees the hostages. 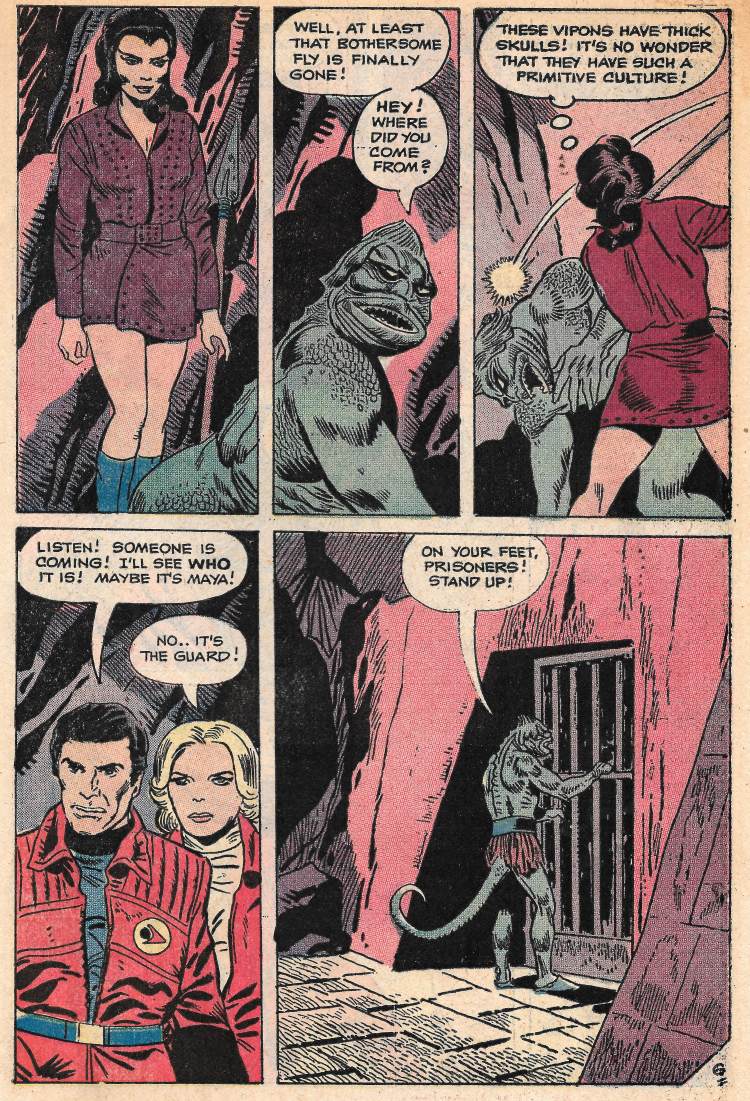 After a brief scuffle in which John gets to pop the leader of the Vipons, the Alphans are on their way back home. 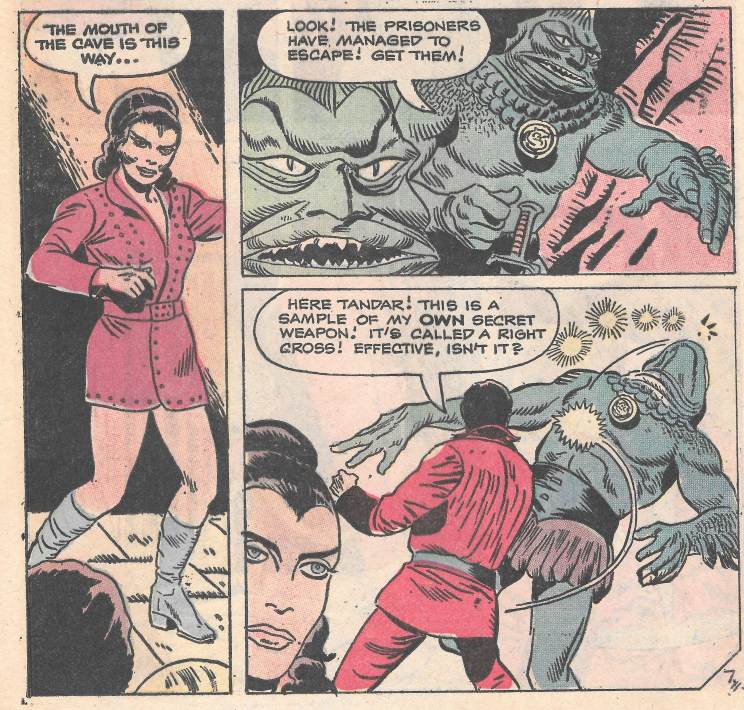 Okay, these pages look a bit rushed on the inking side. Really missing Stanton or Byrne right about now. 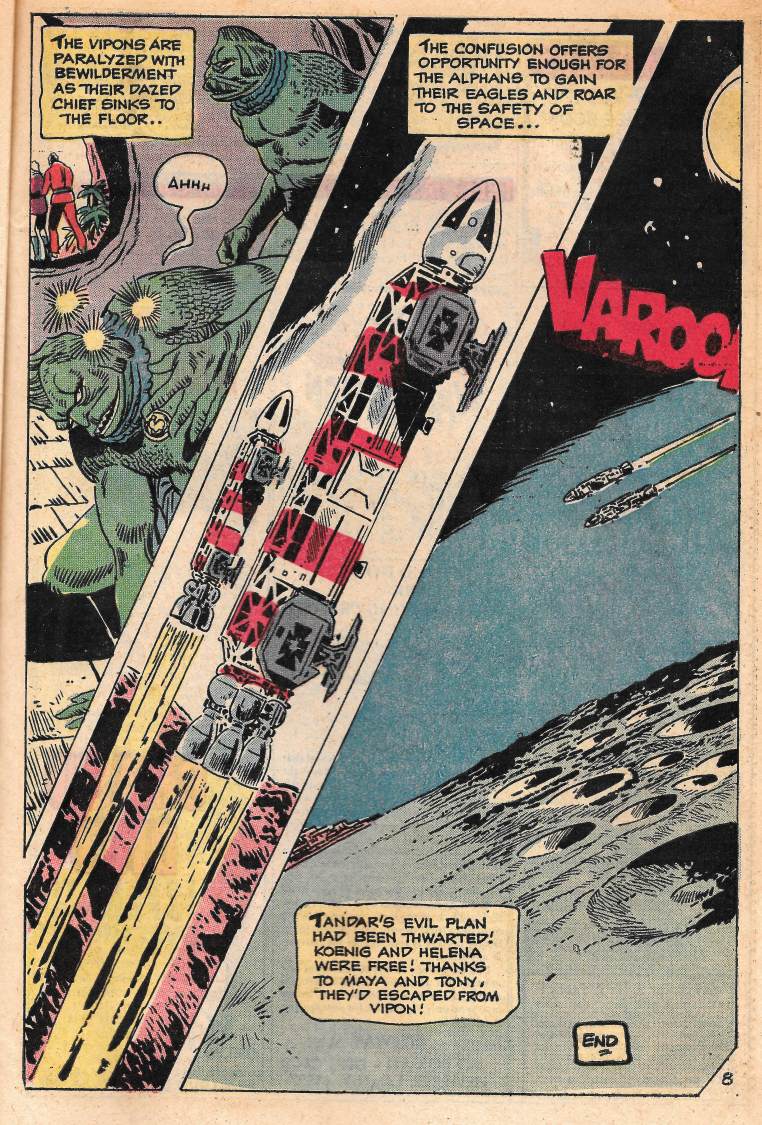 But Boyette does give us some good shots of the Eagles, so I can’t REALLY complain.

The issue also featured a two page prose story called “Primitive Planet” which for those of you who want the LT:DR treatment, is basically Koenig setting down on a cold, primitive planet where there is a promising life reading only to find it is a moving energy snow, so they get scared and jet away. No. Seriously. 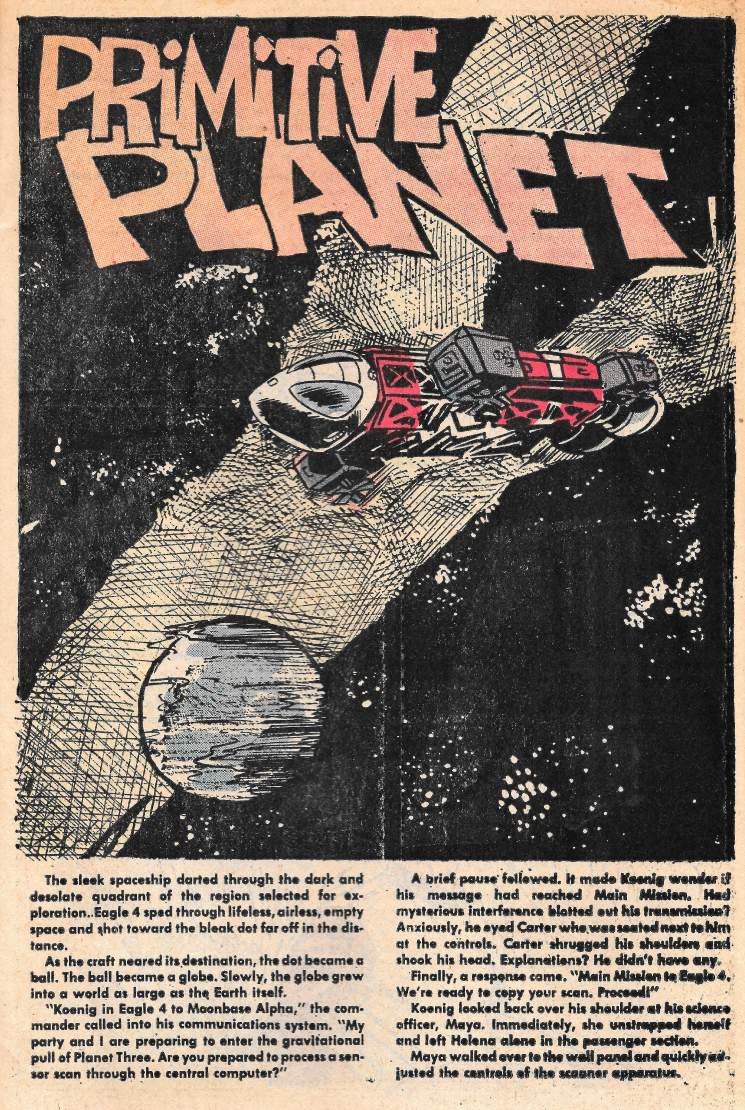 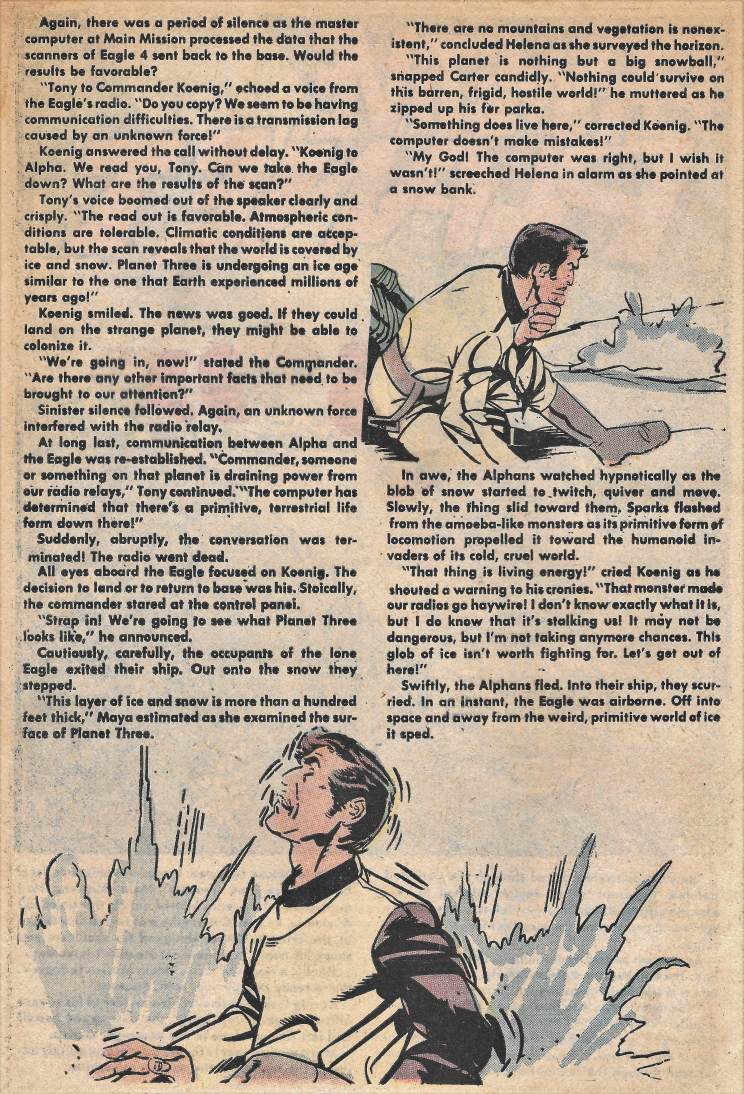 My love of Space:1999 will never fade. Not in the face of the clunker episodes or the overuse of Maya’s changling ability or even the cheap effects of the time. The books and toys that it provided me with in my childhood have made an indelible mark on me. They helped jumpstart my love of Sci-Fi as more than just Star Trek and made me see that the same formula could be applied in many other fashions.

Hats off to Space:1999 and the Alphans. I hope they found their way home finallly.
Posted by SonOfCthulhu at 5:09 AM