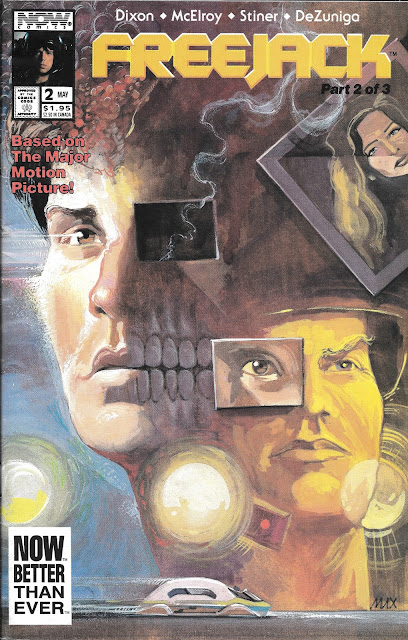 How good can a movie tie-in with a Rotten Tomatoes score of 14% be?

What’s the worst movie that Sir Anthony Hopkins has ever appeared in? Okay, I’ll give you Transformers: The Last Knight. Maybe I should ask for the worst Emilio Esteves movie? D3: The Mighty Ducks might be worse, can’t say because I’m not watching sequels to a Disney movie that I could care less about. What about Rene Russo? Worst film? Buddy! Fine…I give up.

Maybe 1992’s Freejack, taken in hindsight wasn’t any star’s worst film ever, but it was by all recollections incredibly terrible.

The premise is this: Emilio Esteves plays Alex Furlong (not to be confused with the ACTOR Edward Furlong who played John Connor in Terminator 2: Judgment Day) a race car driver who is snatched from the explosive wreck of his Formula-1 car seconds before it explodes in a fireball by bodyjackers from the future year 2009.

You see, in the future we’ve figured out a way to transfer consciousness from one body to another. HOWEVER, everyone in the future lives in a dystopia of muck and pollutants making them terrible host subjects for the transfer. Bodies of people from the past are great because they don’t live in a toxic environment, but the trick is being able to snatch a healthy one right before an accident takes their life.

Oh, and only the filthy rich can afford to jack a body from the past.

Alex’s auto crash is an easily identifiable event, not to mention the person interested in Alex’s body is business mogul Ian McCandless, who also wants to get jiggy with Alex’s girlfriend Julie, played by Rene Russo. There’s a lot going on in this script and most of it is pretty bad. Here’s a trailer to back up my point.

In fact the only parts of this movie I enjoyed were the odd deadpans by Rolling Stones frontman Mick Jagger, who played just the right mix of straight and camp. The movie was panned by its test audiences and more than 40% of it reshot by a second director. Director Geoff Murphy asked that his possessory credit be removed from the final film.

The film is an uneven mess that isn’t much fun to watch (Just listen to these guys debate it) other than as a bad movie, but does it translate into a decent comic book. That’s what we are here to find out.

We are in the middle part of the movie, with Furlong having escaped from the body jacker mercenaries lead by Mick Jagger’s Vacendak character. He’s now a “freejack,” and wanted by the law with a bounty on his head. As for the mysterious person who wants his body? It’s not revealed that the person bankrolling Furlong is Ian McCandless until the third act when Russo’s Julie Redlund and Furlong trap themselves in his offices. For now we just get to see him as this uploaded consciousness inhabiting a robed body linked to the “Spiritual Switchboard” where he can only last another 36 hours. 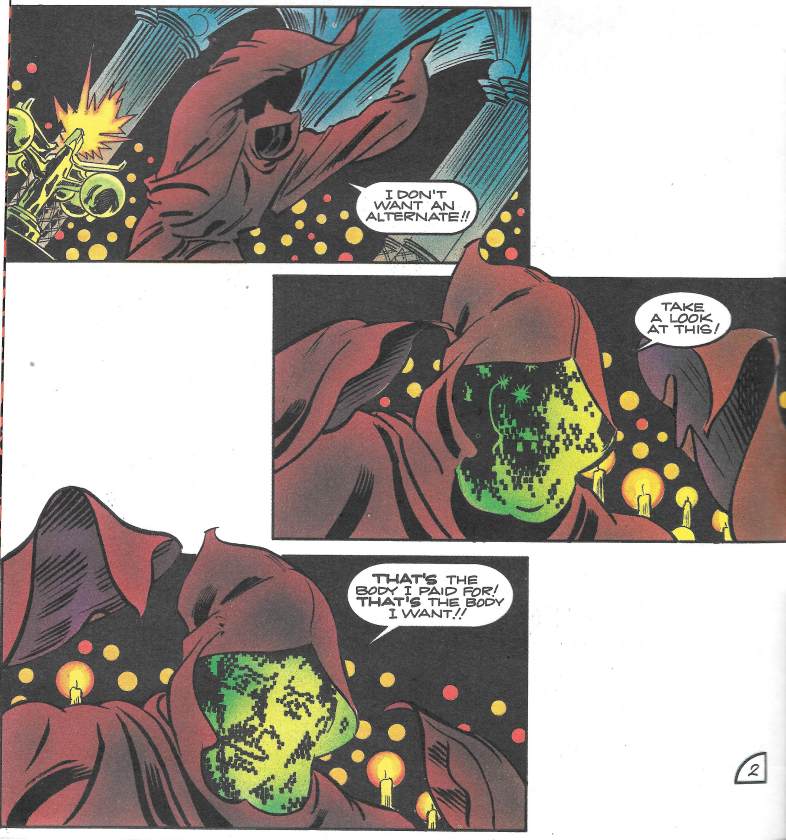 And it’s very clear that only Furlong’s body will do.

Meanwhile, Furlong has been on the run for a bit now and breaks in to a house to rest and recover. 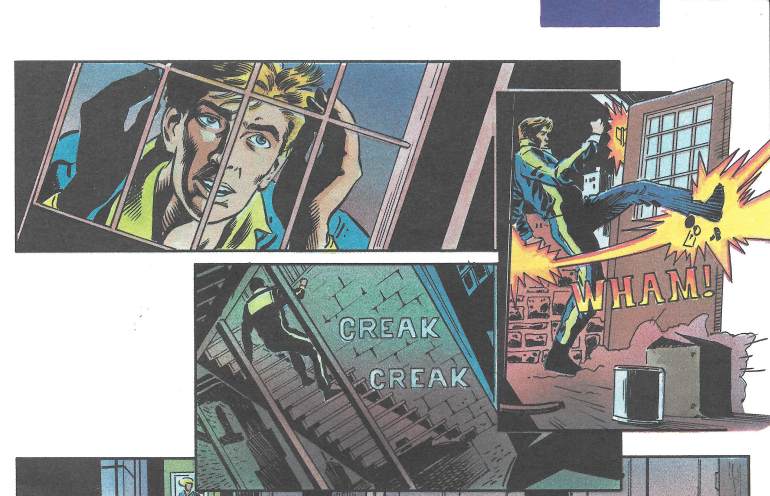 Furlong is shown eating bread and arming himself with a knife when we cut scenes to Vacendak getting chewed out, which is a sloppier bit of editing than I remember occurring in the movie. And all the good scenery chewing done by Jagger is gone, so that part of the book now feels flat.

And then we cut back to Furlong, now finding out he’s broken into a shotgun wielding nun’s house. At first she’s ready to fill him full of holes but becomes sympathetic when she learns he’s a freejack. 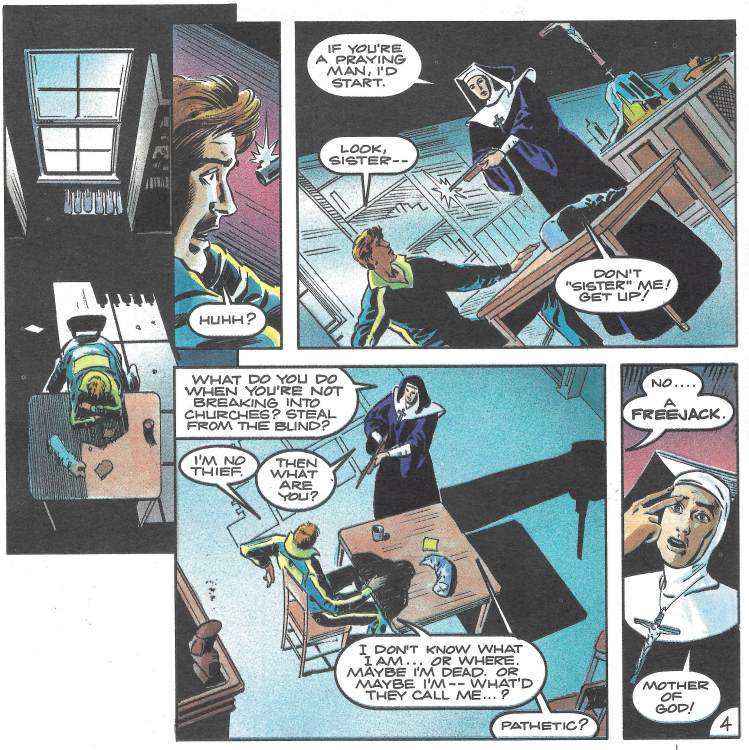 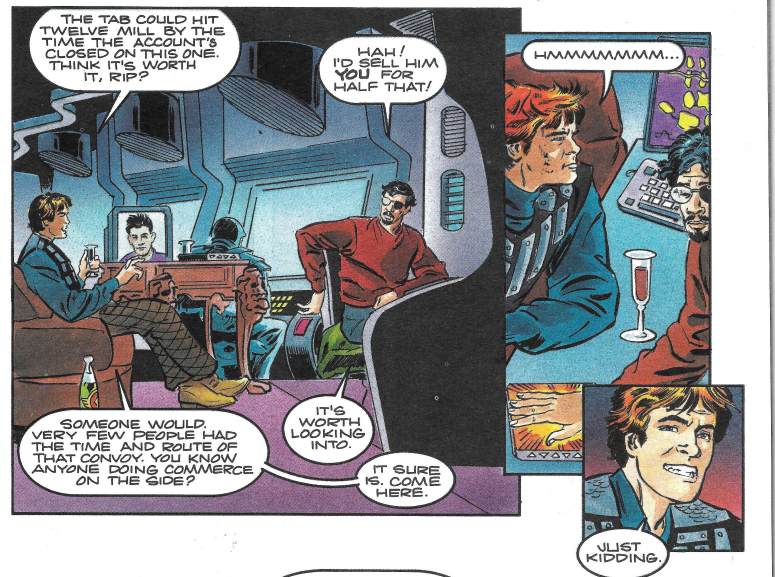 Remember me asking if the book could be worse? Well, here is my answer.

It is more disjointed. Scenes that were quiet and jokey, like Vacendak making a reference that maybe one of his own men’s bodies would do as a replacement for Furlong, speed past so we can get to mindless action set pieces that translate poorly to comic book form. 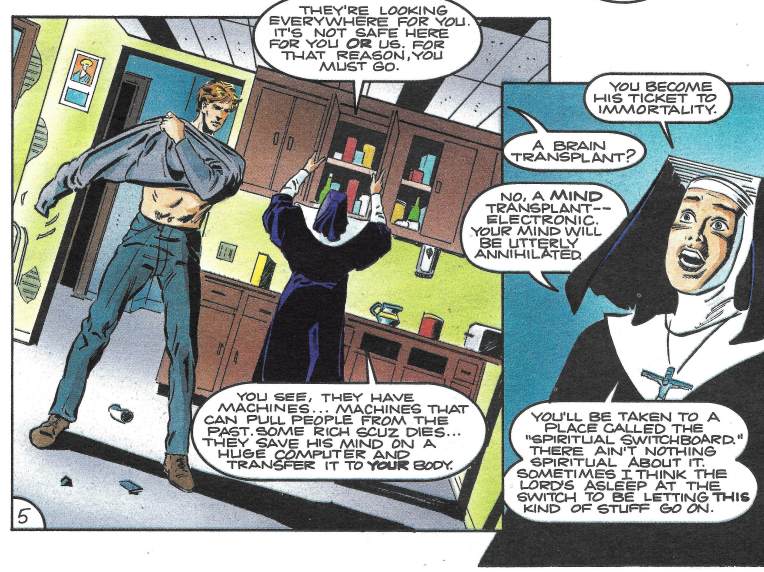 Anywaaaaay, the nun fills in Furlong and gives him some food and a pistol. Furlong seeks out his pal Brad to see if he can cop a favor from him in the form of some help in getting to Julie’s current address. Brad gets the drop on Furlong first though. 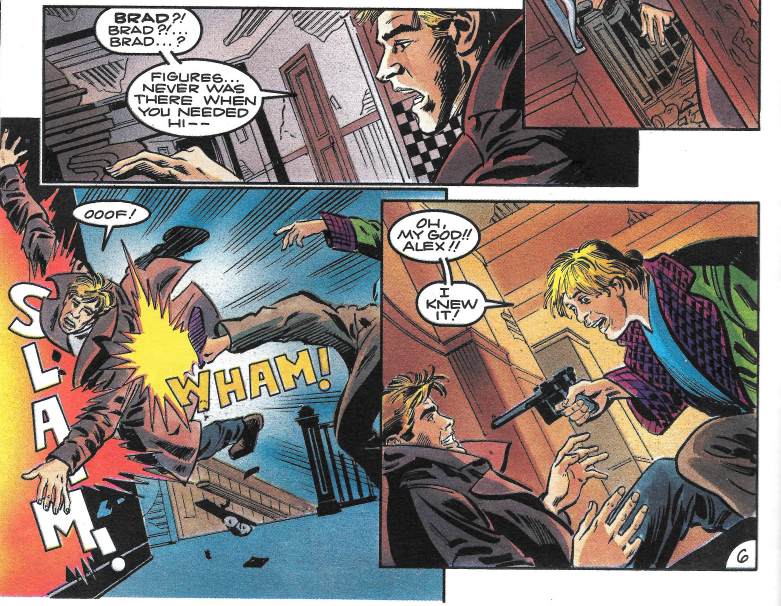 And proceeds to exposition dump him through the plot of the movie. The fact that this is part of the movie too is pretty damning. That screenplay really needed a cleanup or three. 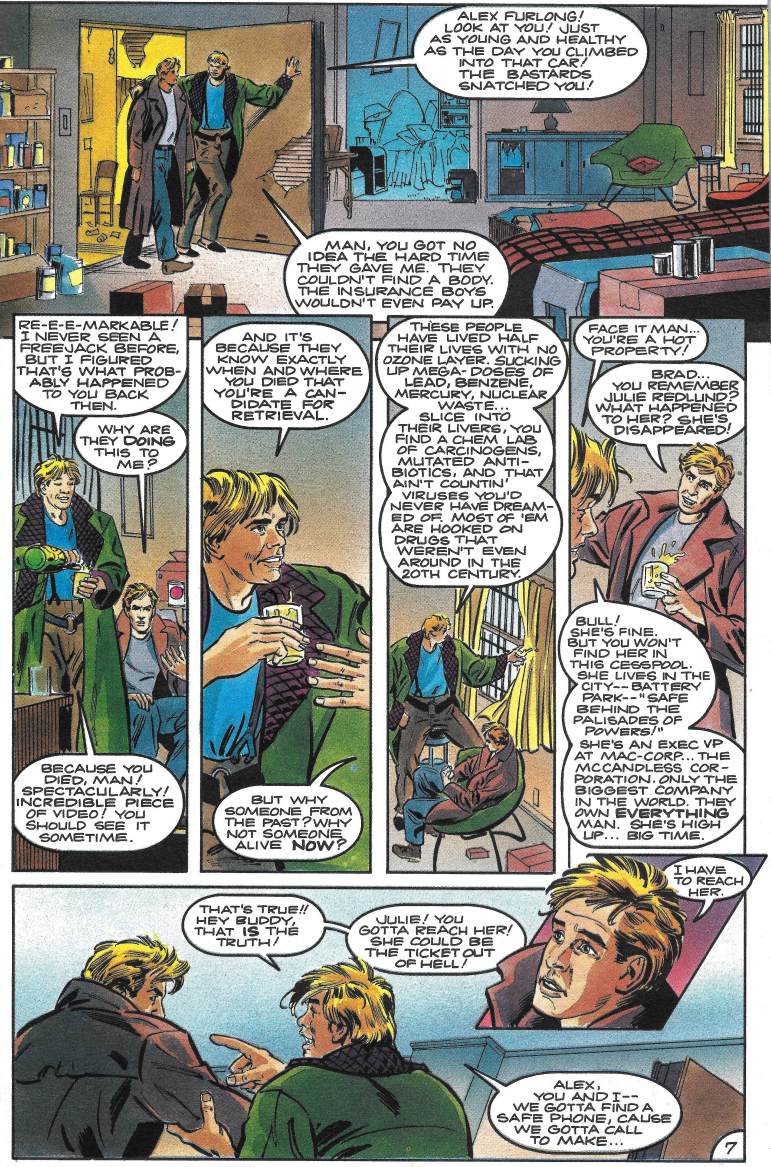 With the plot not-so-nicely tied up get ready for an action scene to balance out all the dialogue. Wait…Wait…first some more dialogue. This time to flesh out Anthony Hopikins McCandless and Julie’s working relationship and to throw some doubt on him being the figure on the first page that was already dead. This was explained later as computer trickery. 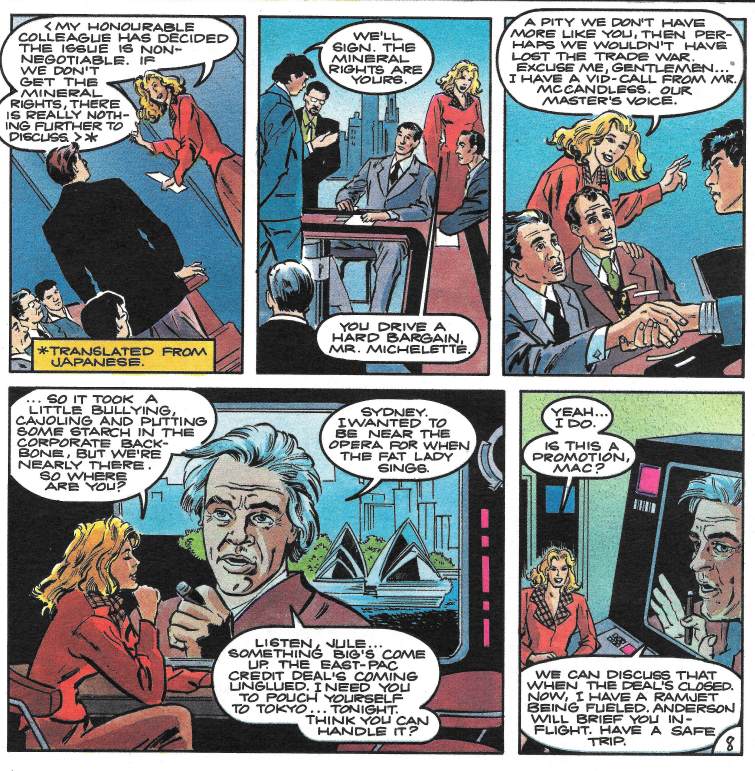 Meanwhile Furlong and Brad head to a place where Brad can phone Julie safely, which happens to be this sleazy diner. While Brad phones, Furlong plays “mine’s bigger” with a fellow customer. 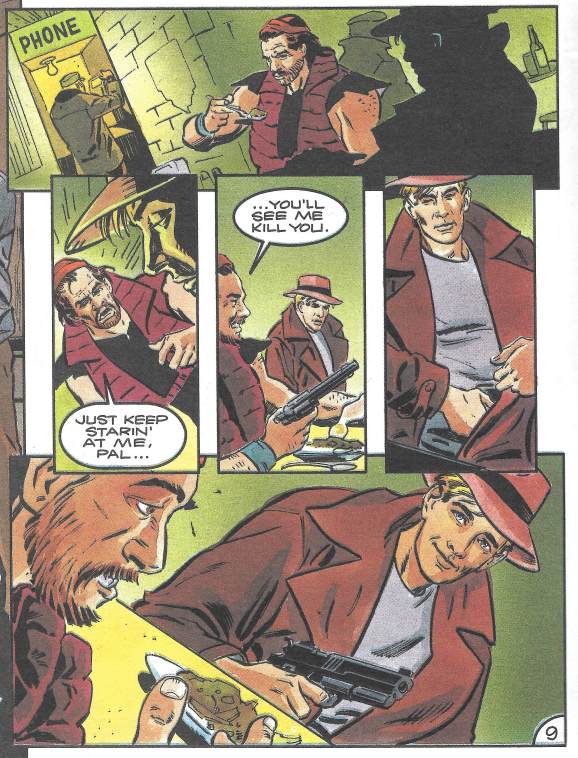 Brad comes back with good news, but it may not be good news for Furlong. 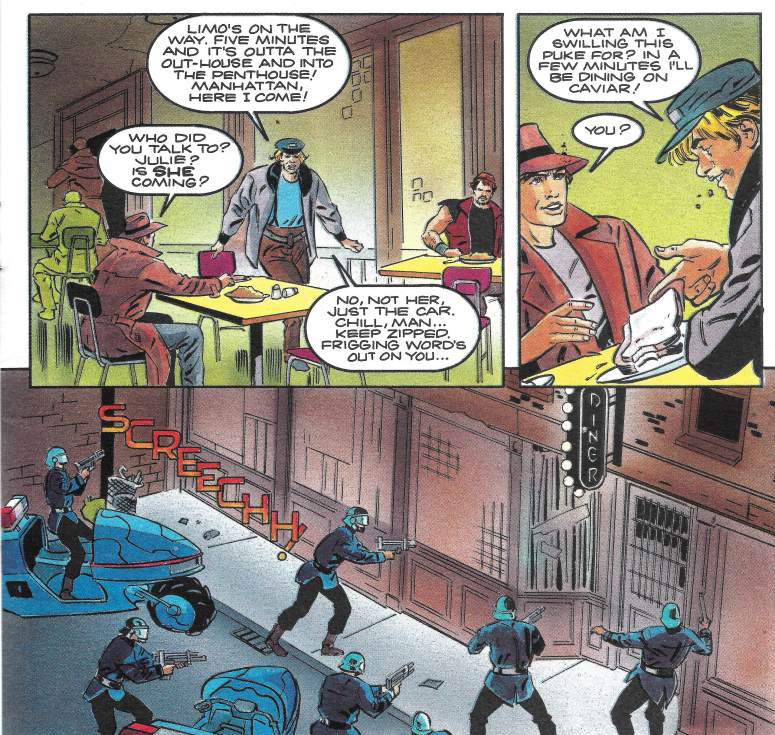 Like all slimy ex-friends, Furlong finds out that Brad has sold him out. The inevitably leads to Brad's untimely demise at the hands of the pistol toting patron… 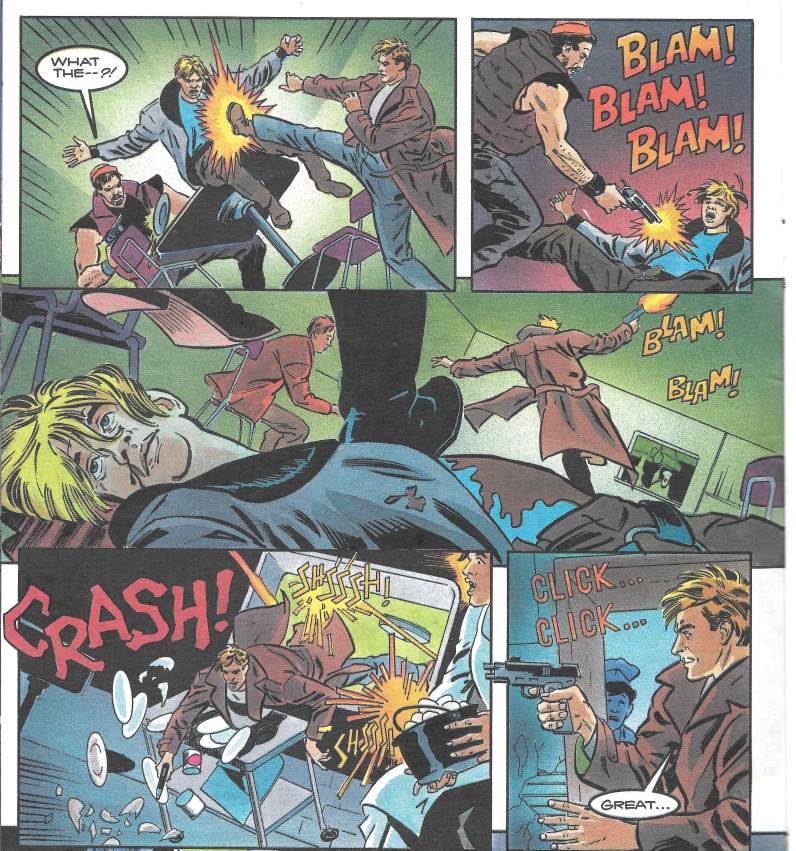 …and Furlong’s discovery that the pistol he has isn’t loaded. He uses everything at hand to escape the pursuing bodyjackers including eggs… 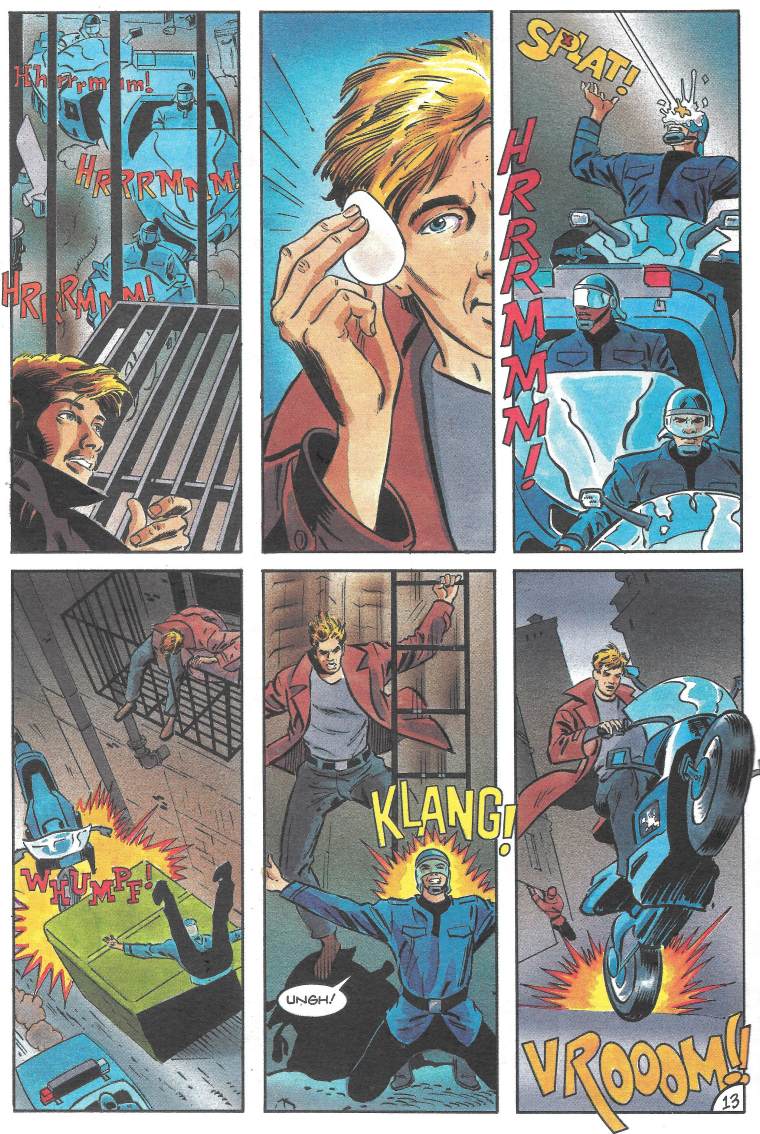 Until he finally hightails it out of there on a motorbike.

He turns up next inside Julie’s apartment which is on the nice side of town and should have a state of the art surveillance system. But no, he’s just there…chilling…when she gets home. 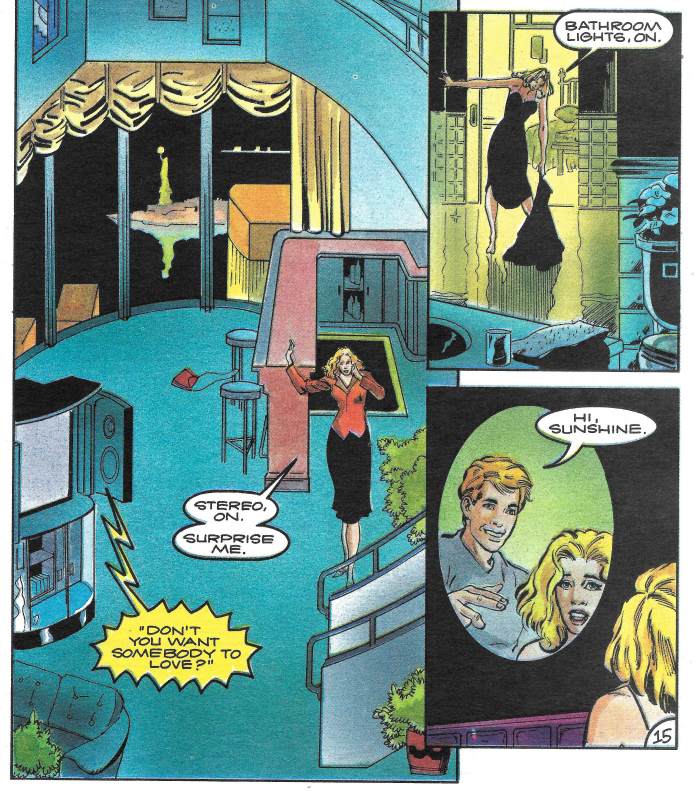 She reacts predictably by running away until he can prove to her that he is REALLY Alex. 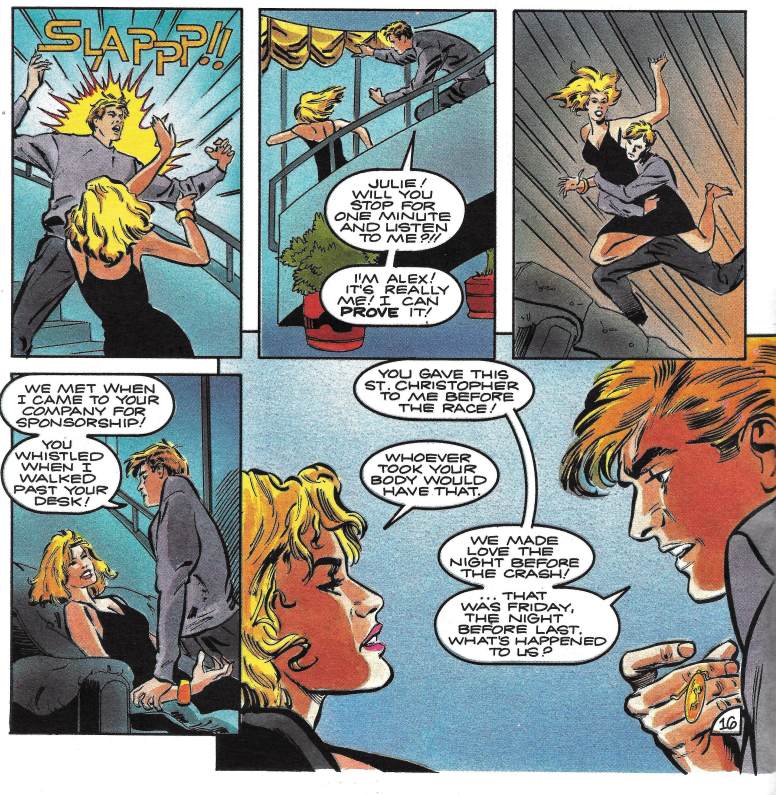 It does answer how he got in, as McCandless opened her suite so Alex would be easier to catch. Julie still throws him out where Vacendak and his men are waiting for him. 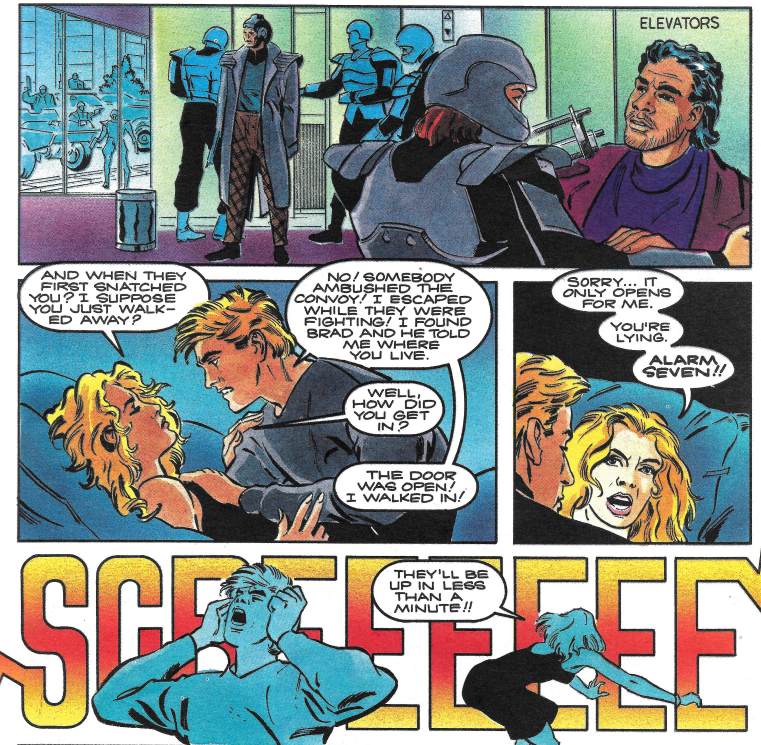 She instantly regrets it as people show up chasing Alex, but too late: he’s stolen this guy's “Fine Wine Truck” and made his escape. 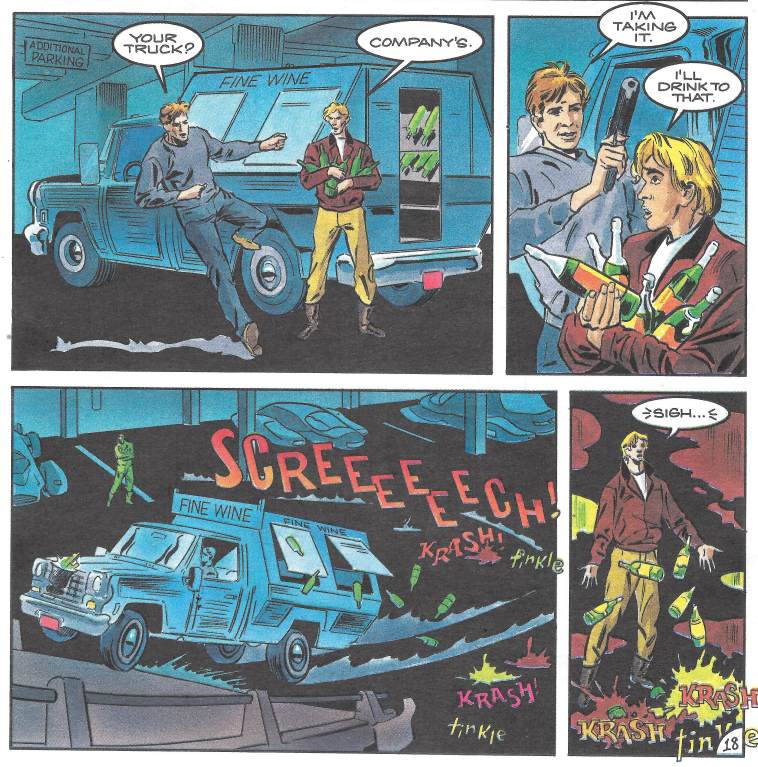 Which nets us another chase scene and some scenery chewing by Jagger in the movie which almost translates. 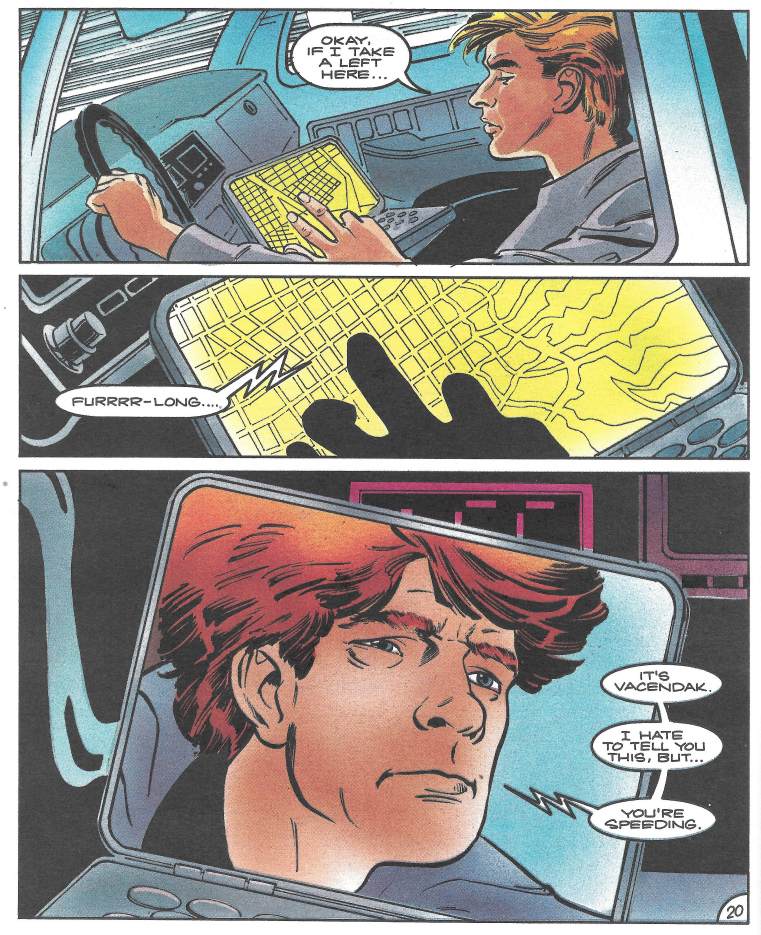 But it becomes mindless too quickly… 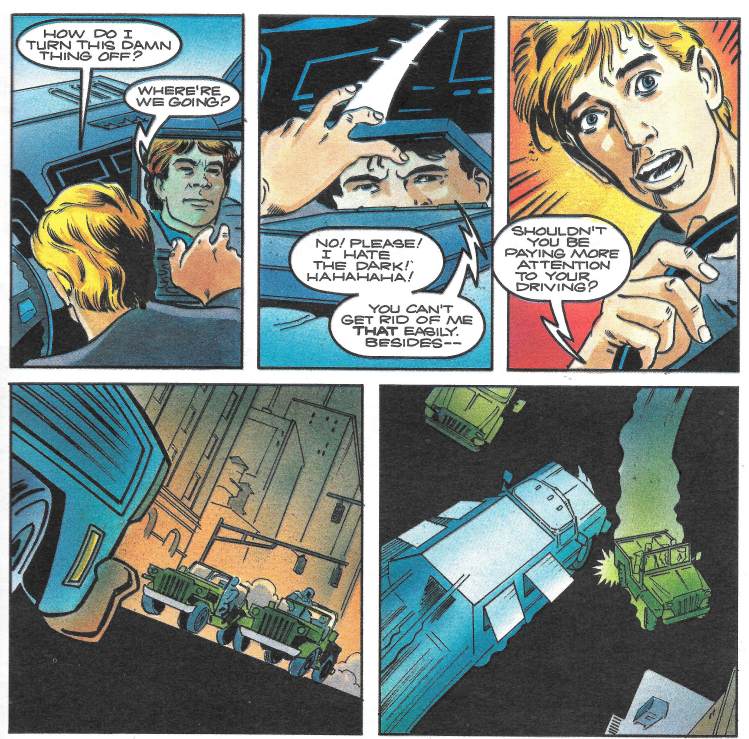 And ends with Alex in the drink, which is precisely that Vacendak doesn’t want him doing. 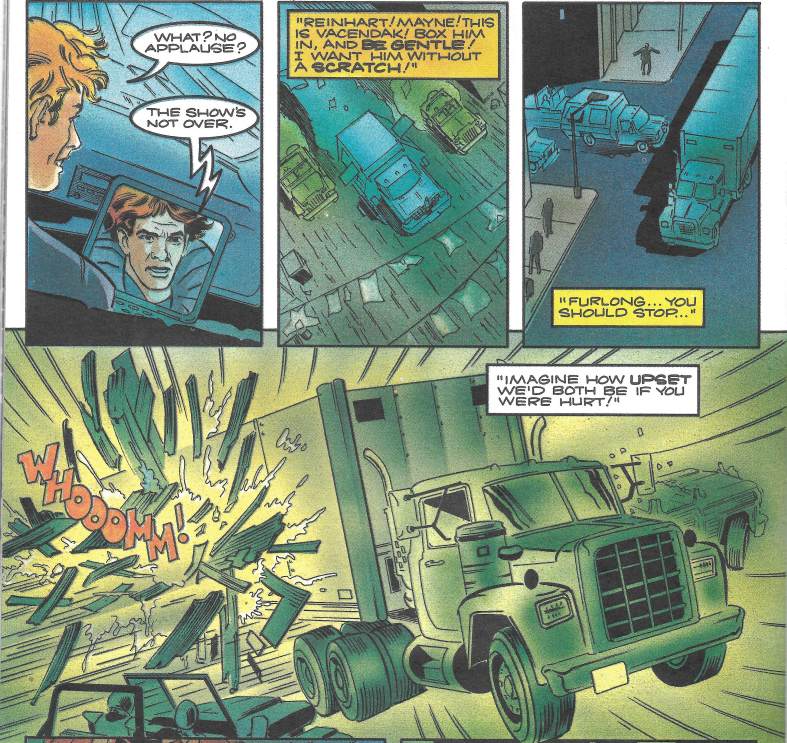 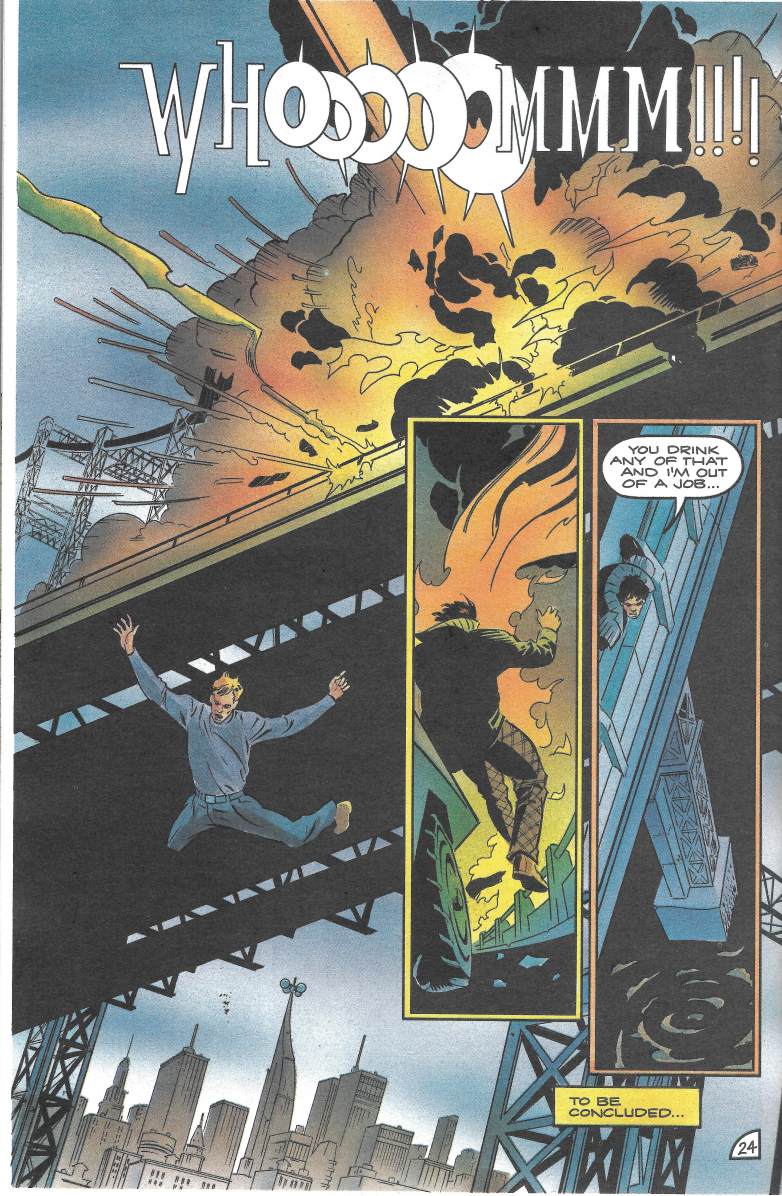 What little joy I remember from the movie is lost here, so sadly this is one book that in mirroring the subject matter too closely misses the mark. Both the movie and the book could have used more insanity, a better script, and more Jagger.
Posted by SonOfCthulhu at 7:09 PM