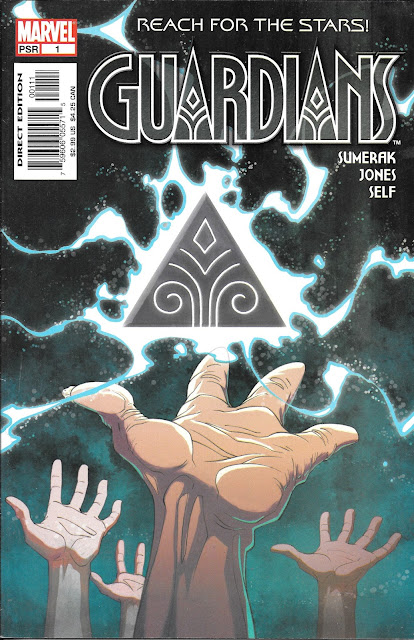 These guys could use a talking tree, an intelligent racoon and more than three pages worth of story

I’m not a fan of the decompressed storyline. I’m old school and I remember the days when storylines that weren’t "shake the universe down to its core" events lasted, at most, two issues.

So the non-616 universe story that was Marvel’s Guardians was sure to not be a favorite of mine. The five issue mini charts the story of a group of kids that happen upon an alien, must cope with the knowledge of their close encounter for years, and then finally are called upon by the same alien for assistance with an outer space “mission” of some dire import.

That summary above would have taken Stan and Jack about four pages to put up, jumping us straight into the action on page five. And while I’m not against a bit of character exploration, just realize going in that if you run down that particular path then you are not telling the story above. You’re doing a character piece and everything around it is just trappings for the character to bounce off of. Aliens, superpowers, mutants, whatever…they are nothing but backdrop and the real struggle is the internal one that is going on in your character’s head.

You CAN do that story, but it is harder to tell. And Guardians doesn’t do a good job with being a character exploration piece. It feels like stale E.T., long and boring with very few interesting ideas. Let’s take a look, shall we?

We open with the troubled childhood of our protagonist, Vince. His parents are on the verge of splitting up and he has a front row seat. Also note that he has a hard-on for all things sci-fi, as you can tell from the spaceman doll and the signs on his door. 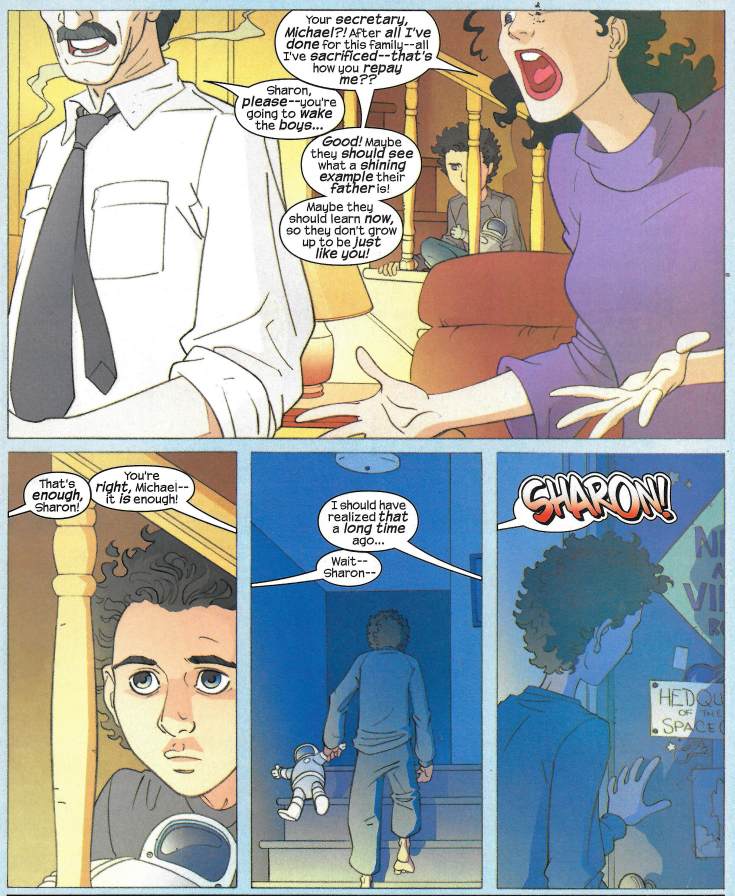 He retreats to this bedroom that he shares with his older brother Nick, where they first discuss how upset Vince is about his parents fighting. And then something outside the window distracts Vince. 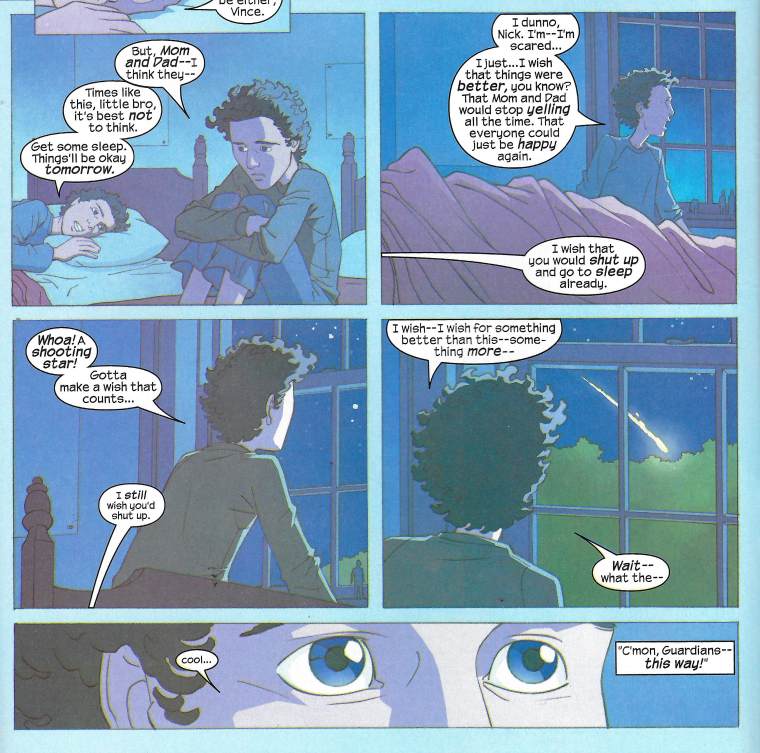 And that meteorite causes Vince to assemble his brother and a group of neighborhood friends to sneak out for a quick trip into the nearby forest to find the chunk of rock that fell. Note who we have here: the lead, his older brother Nick, the female love interest Charlie, the disabled friend Jimmy, and the non-white best friend Martin. Feels a bit formulaic, but okay. 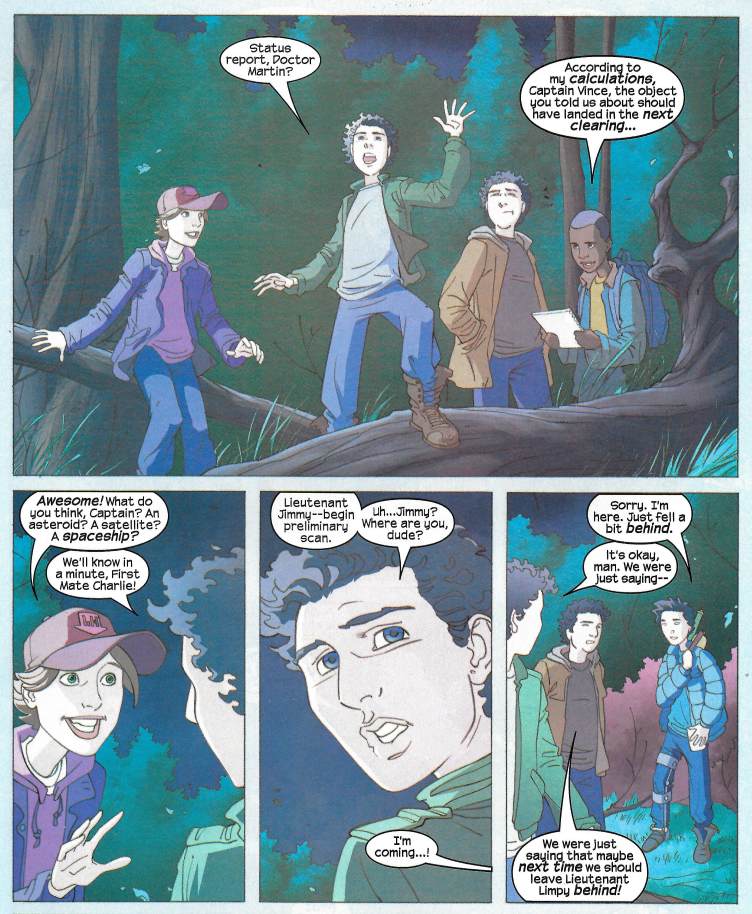 And so is the drama of Nick being at odds with everyone because he is only along for the ride to make sure Vince gets back unhurt so HE doesn’t get in trouble for letting him sneak out alone. 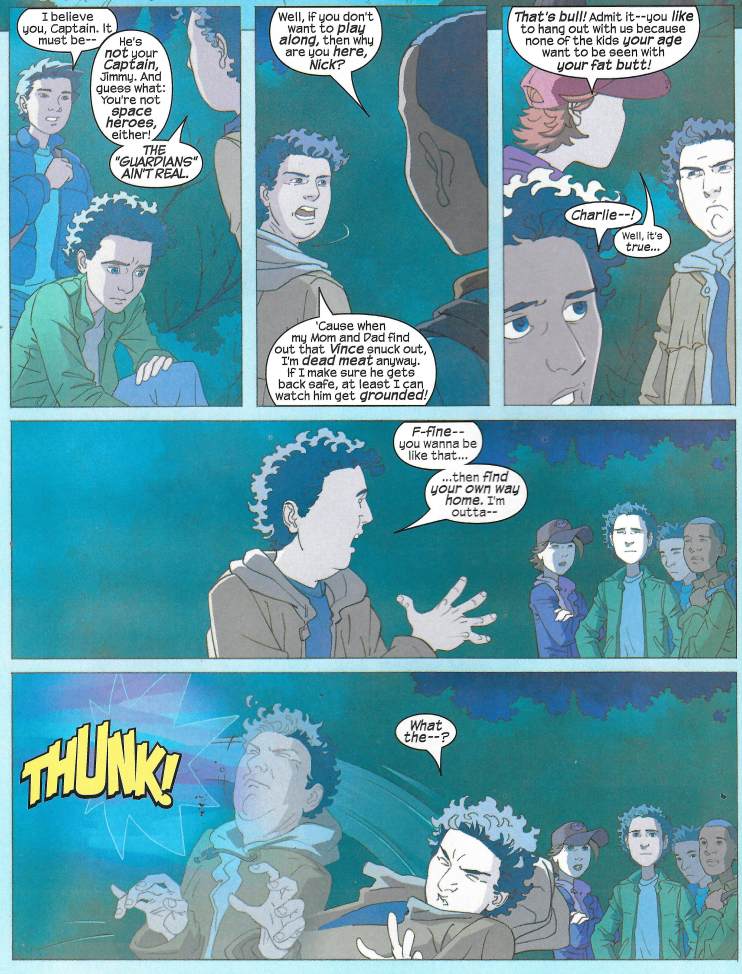 And then they find a force field. 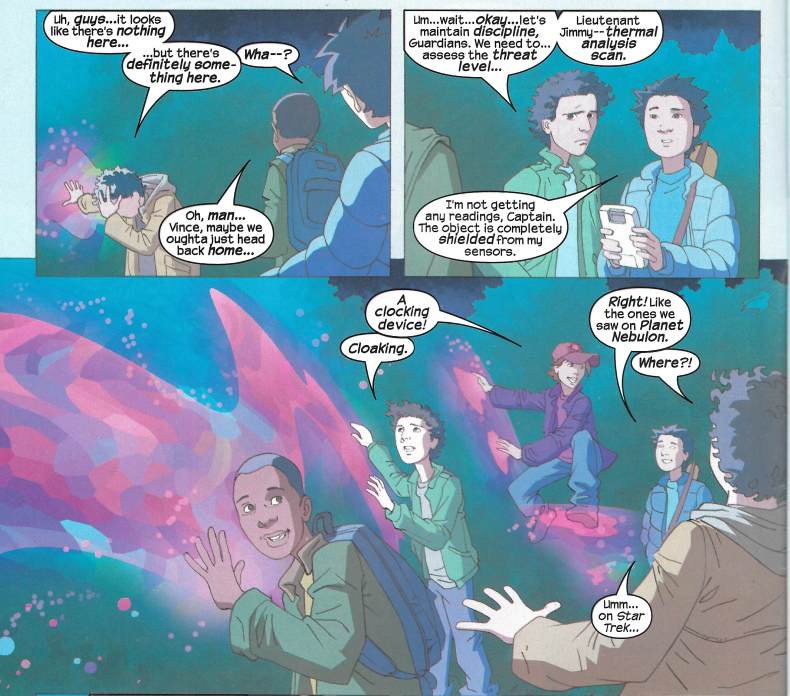 The rest of the kids are still into this “play like we are space adventurers” thing, even in the face of a real threat from space, but whatever. I get the child-like wonder and everything.

Nick is the only one really thinking things through around about now and as the ship makes a sound, perhaps for the first time the kids regret following Vince out tonight. 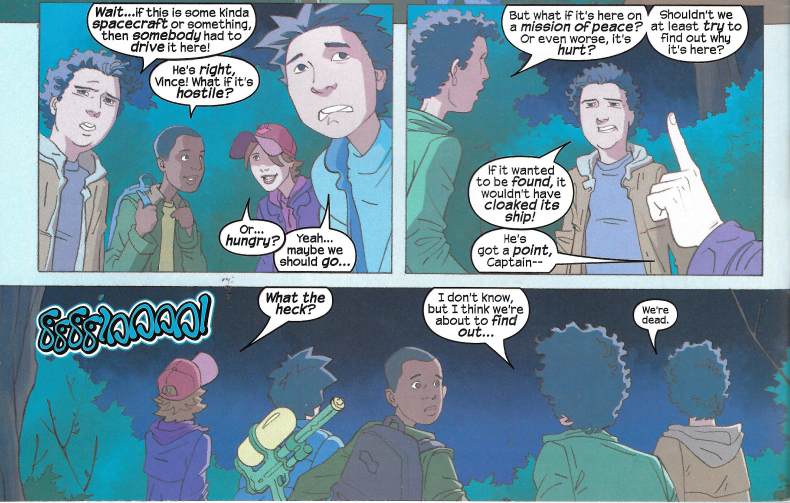 But the sound is followed by the sudden discovery what appears to be a very CHILDLIKE alien being menaced by a vicious dog. Yes, at this moment I get a very Explorers vibe from the book that I can’t shake. This looks like alien kid out looking for adventure meets Earth kids out looking for the same.

What they both found is a one mean puppy, however. 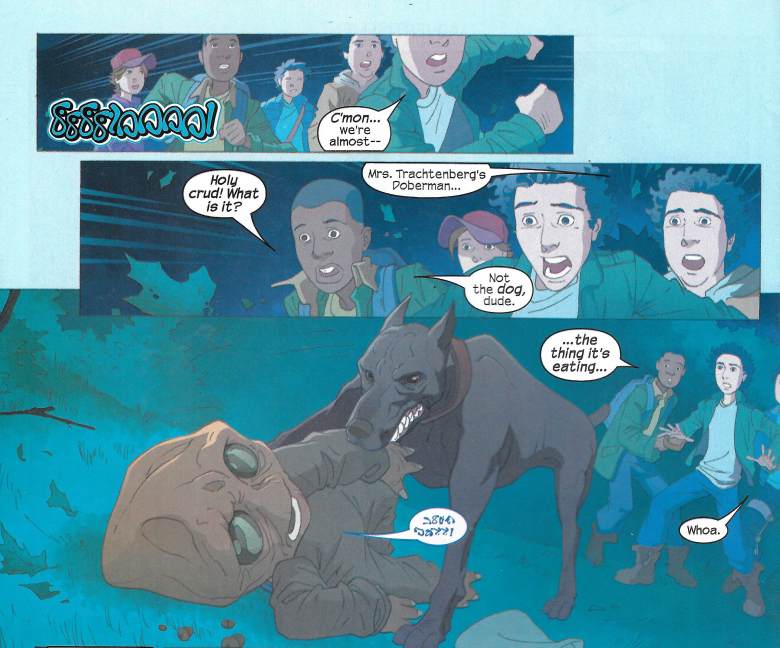 Vince’s Guardians spring into action, spraying the dog and distracting him with a sandwich. 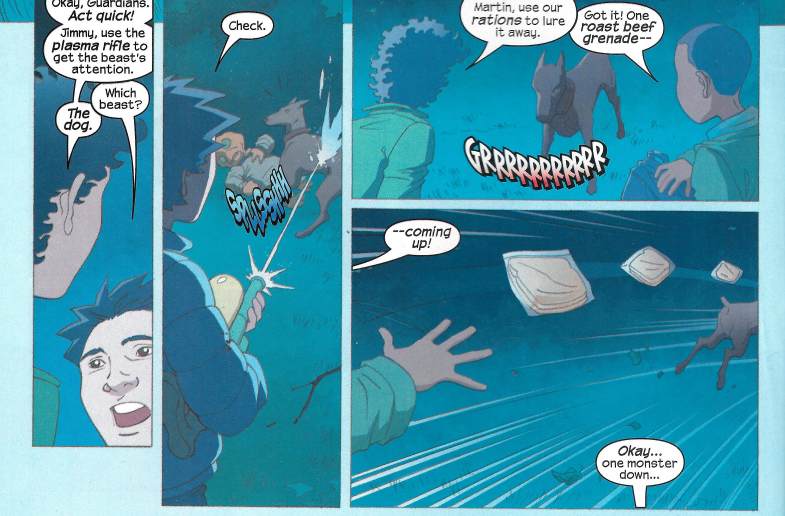 And the alien, now speaking English, introduces itself as Dre’kk. He state’s he is on a peaceful mission when his ship was attacked, so he landed here for repairs and supplies…none of which would cut ice with an adult but these kids eat it up. 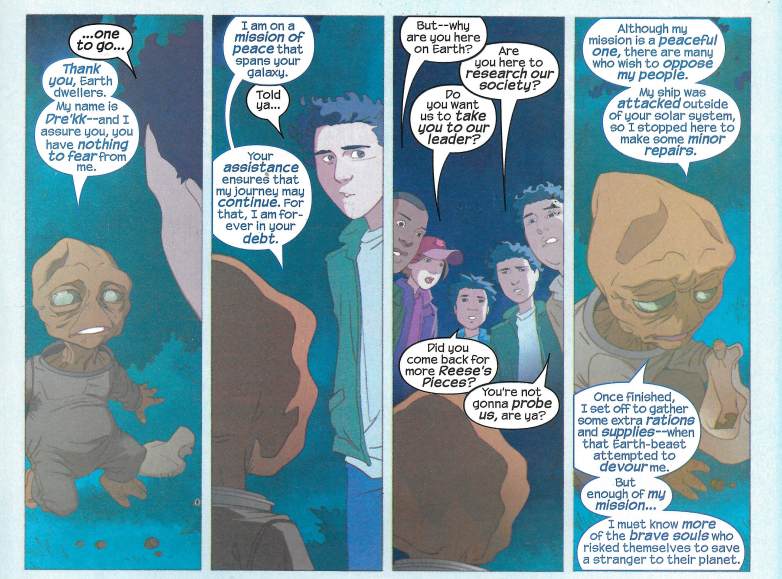 None more so than Vince. 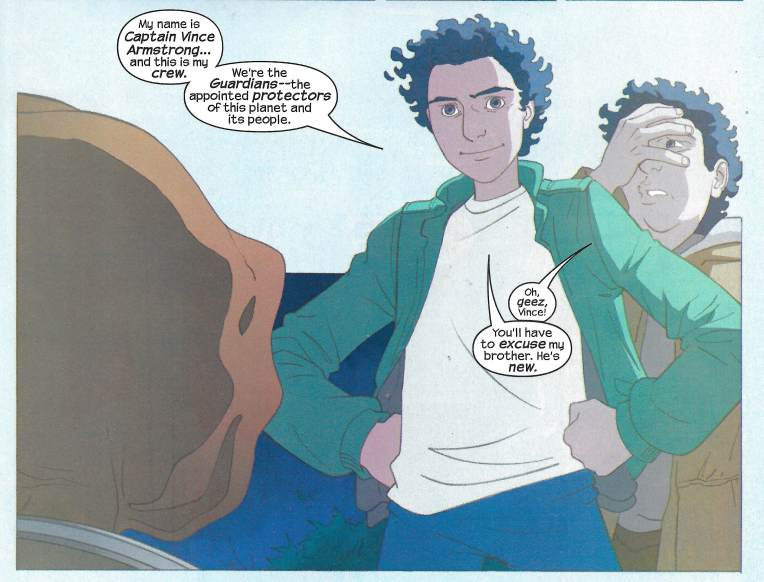 He goes all in on his assertion that this group of his are protectors of the planet, much to his brother’s embarrassment.

To which the little alien gives the kids a stone trinket and then climbs aboard his ship and leaves. 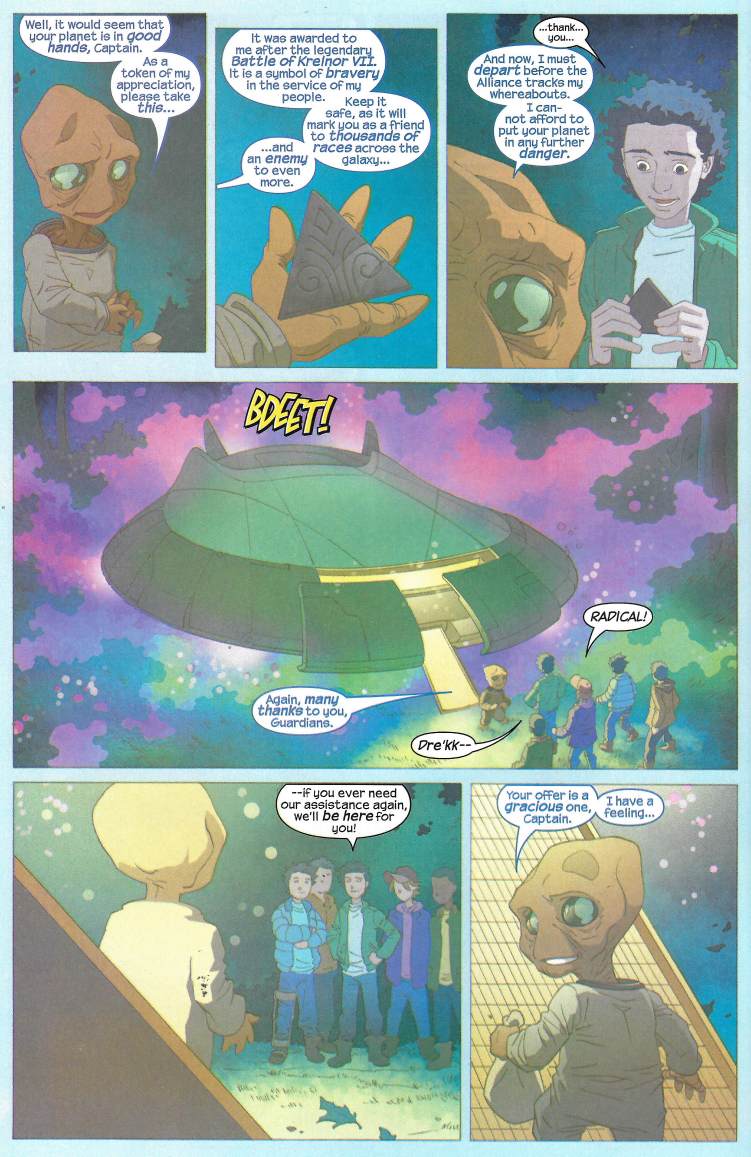 Nick makes an observation as the ship departs… 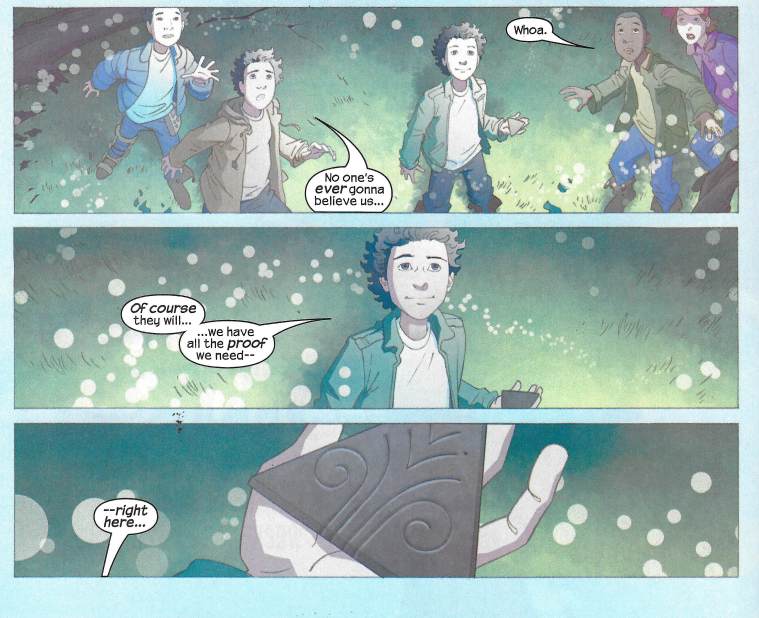 …that Vince disagrees with.

Skip forward I would guess around ten years and dozens of therapy sessions later we find Vince as a college student. He believes his memory of the events even if others don’t. 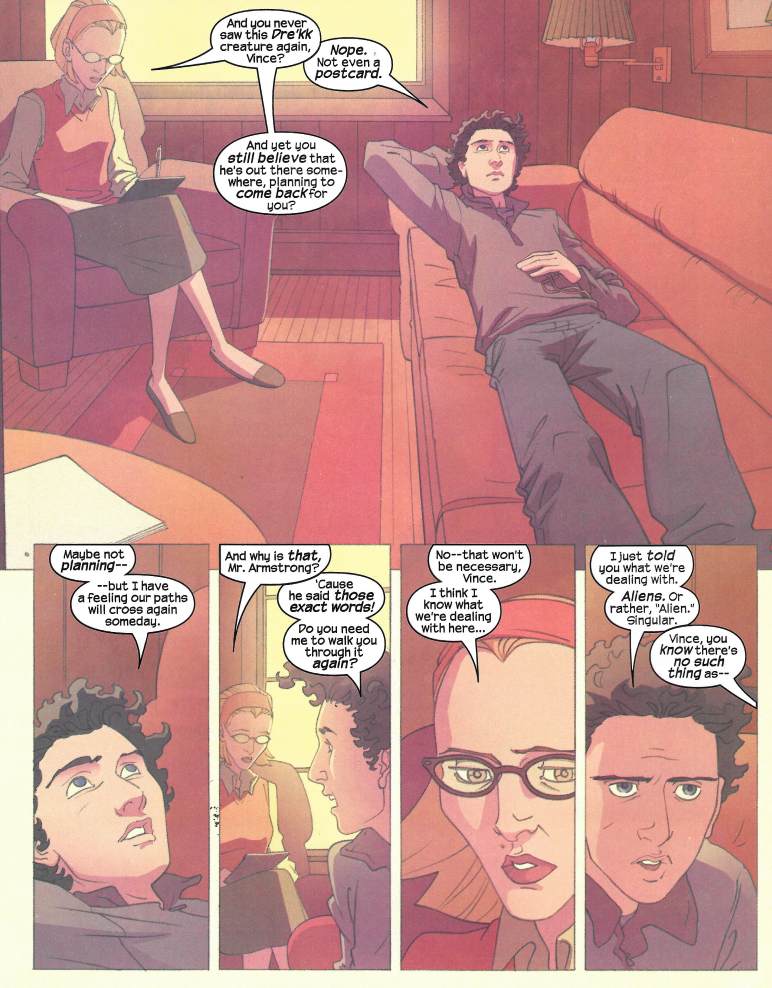 And that has caused some real-world problems for Vince. He sees himself as a hero and life on Earth is too small for him. His life is frustrating and he has occasionally gotten into trouble over feeling anger at no one believing him. 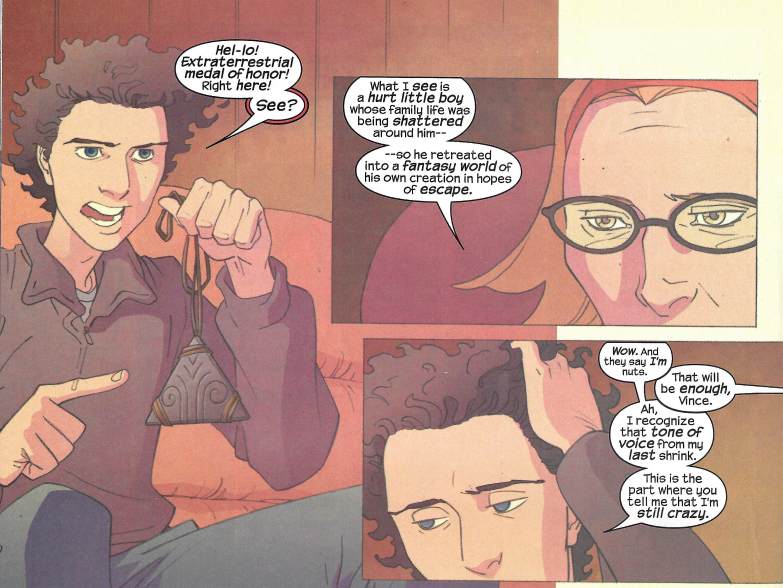 As the session ends we learn it is his birthday too.

His brother picks him up and mention an incident that necessitated this new round of therapy sessions. Nick, meanwhile, has moved on without issues and has a wife and kid. He doesn’t bring up the events of that night to anyone that wasn’t there, apparently. 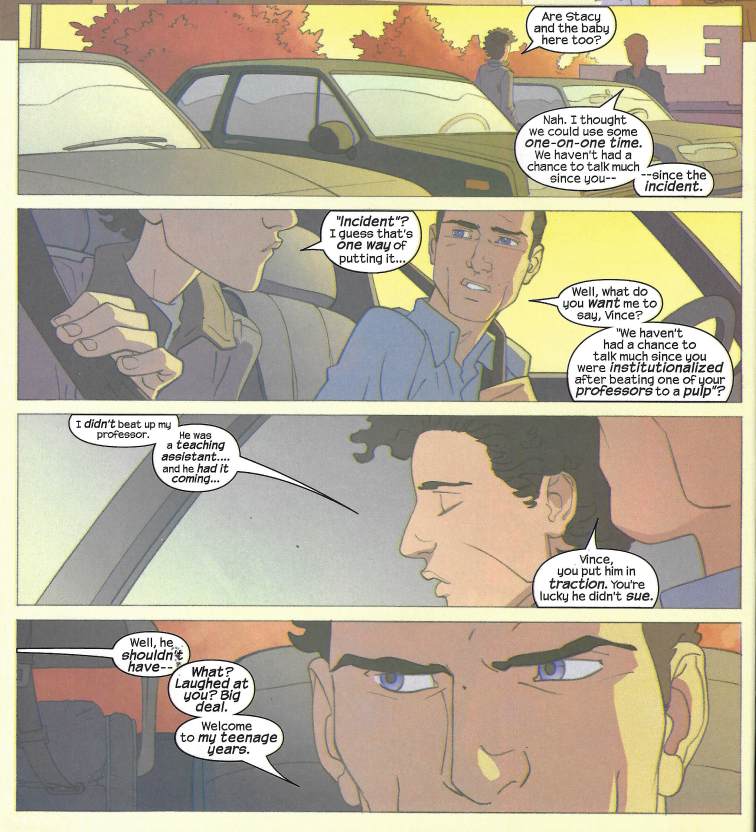 …or he discounts it completely. In some ways this is a neat storytelling hook: should Vince give up his fantasy of being a world-saving Flash Gordon and deal with the real world? Should he move on with his life and stop waiting for an adventure that will never happen, find closure with his childhood thoughts, and rejoin the rest of the us in working toward a brighter future in a more mundane manner. 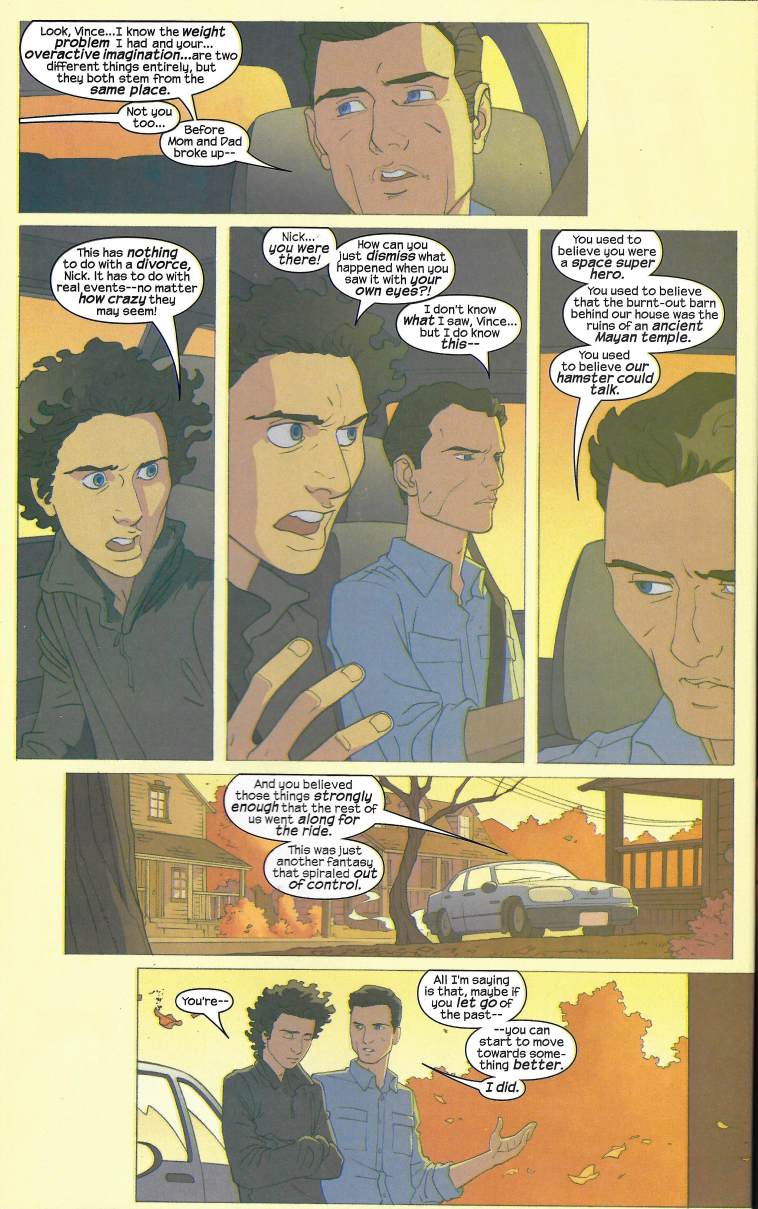 The answer is yes, of course. It would be nice if we had a series where he did just that at the urging of his friends. 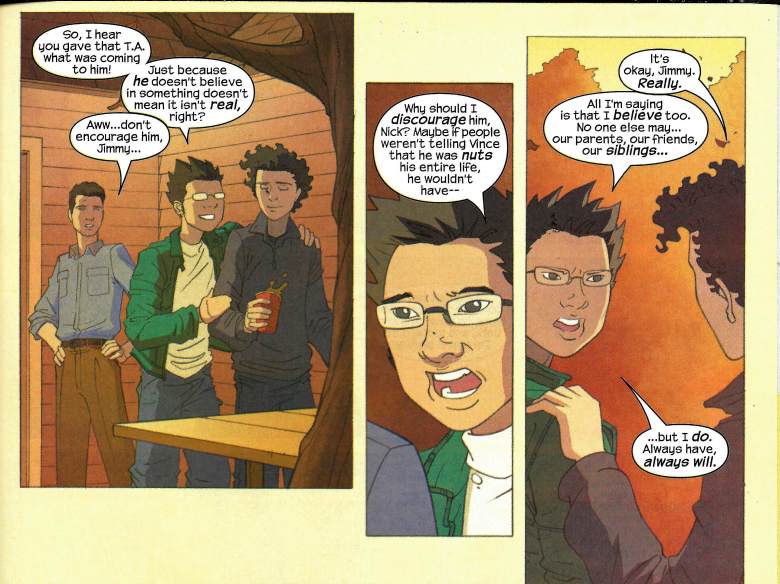 Jimmy is the only friend to make the party. Martin is working and Charlie never called back. And Jimmy isn’t the one to talk sense into Vince. He’s on the “believe in the dream” train and that only has one station to stop at: continued avoidance of growing up.

I know the thrust of this piece should have us siding with Vince against anyone who is blind to the truth of what he saw, but I find myself on the opposite side of that coin. Vince needs a reality check. People don’t believe without irrefutable evidence and his stone necklace doesn’t cut it. He needs to learn how to grow out of his fantasies of childhood. But we won’t get that without some boilerplate story where the alien comes back and proves Vince was “right” all along. 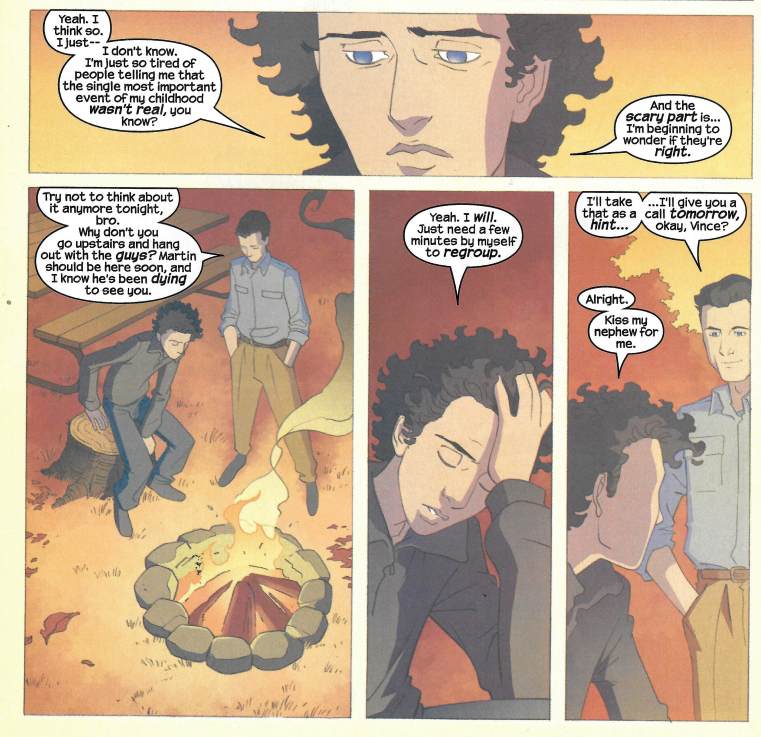 For now, though, we are on a ride of meeting everyone one time so we get an update on their situations before next issue’s “getting the band back together”, which I see for THIS story is going to run into the next TWO issues leaving only two issues for space-escapades or whatever. Next up is Charlie, looking pretty foxy. 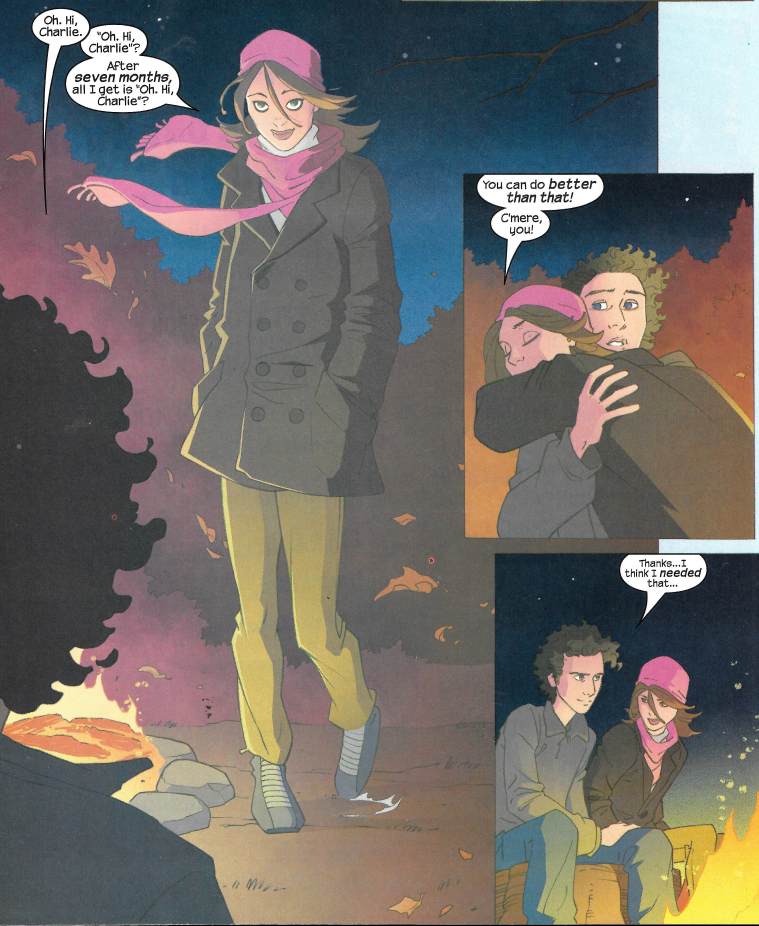 She’s all grown up now and seems interested in Vince… 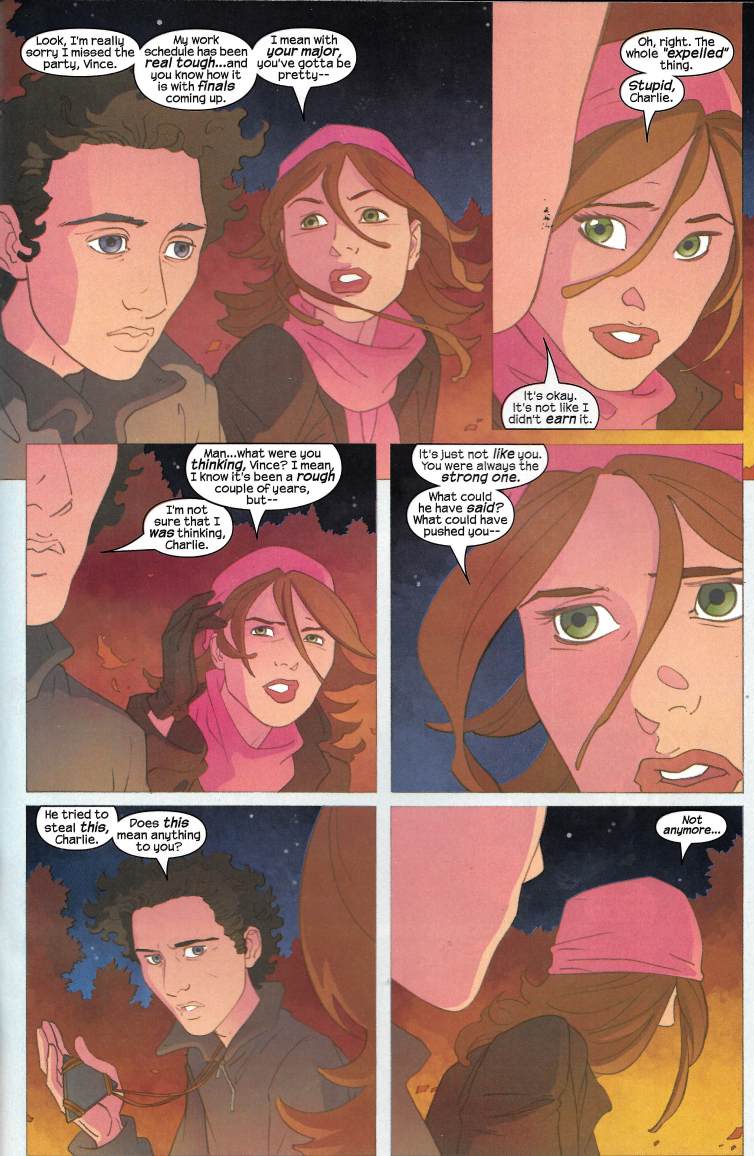 …but already taken. Welcome to the friend zone, Vince. You should have moved past all your Guardians issues a lot sooner. 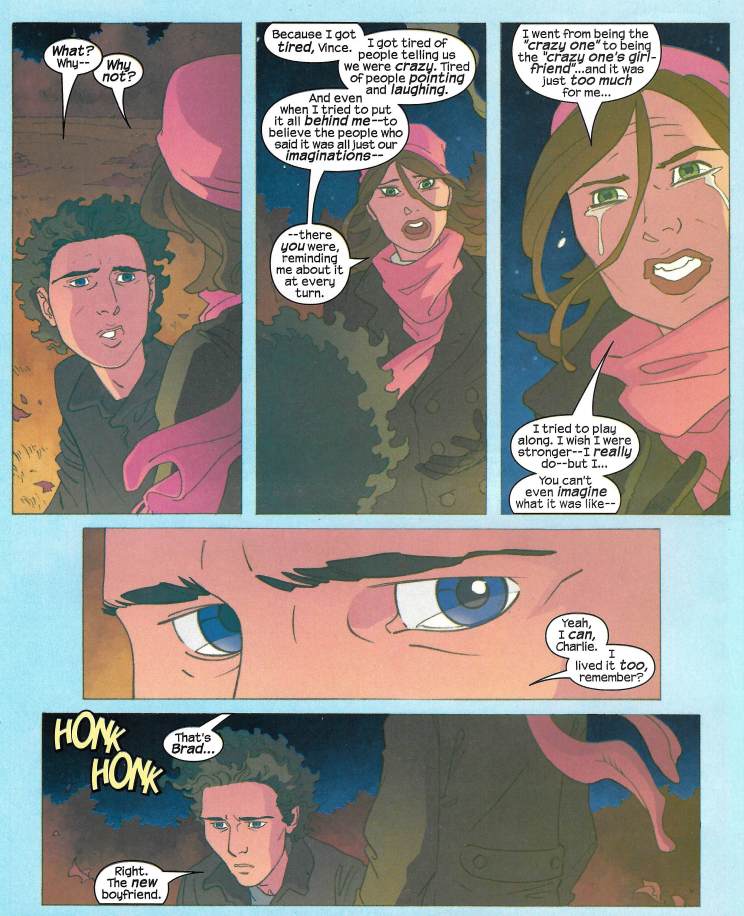 And FINALLY, that is the straw that breaks the camel’s back. Vince tosses his fantasy away, both metaphorically and literally. Now the rest of the book could be Vince struggling to get back the life his escapism has cost him. Again, that would be an interesting story. 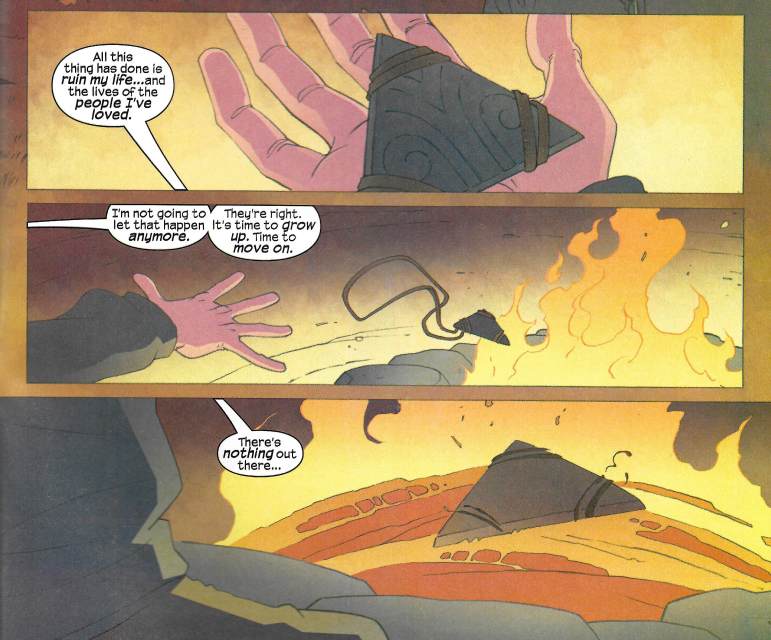 But No. We get two pages of “something happening on alien spacecraft.” 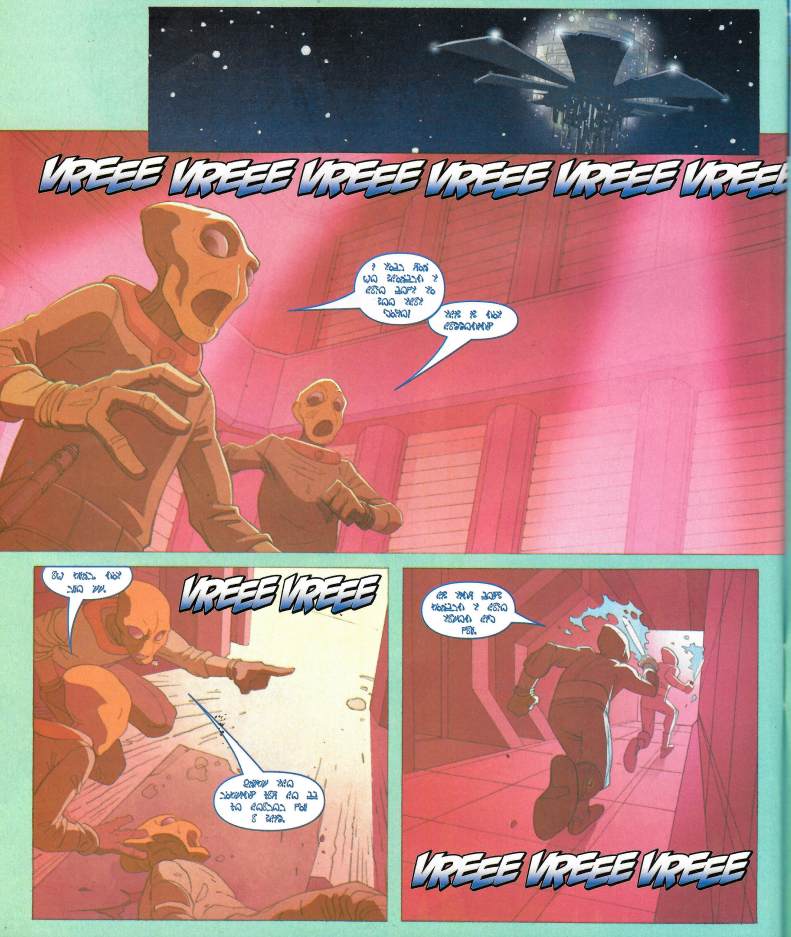 Quickly those scenes are followed by our little alien friend stealing a ship while others shoot at him, with his goal being… 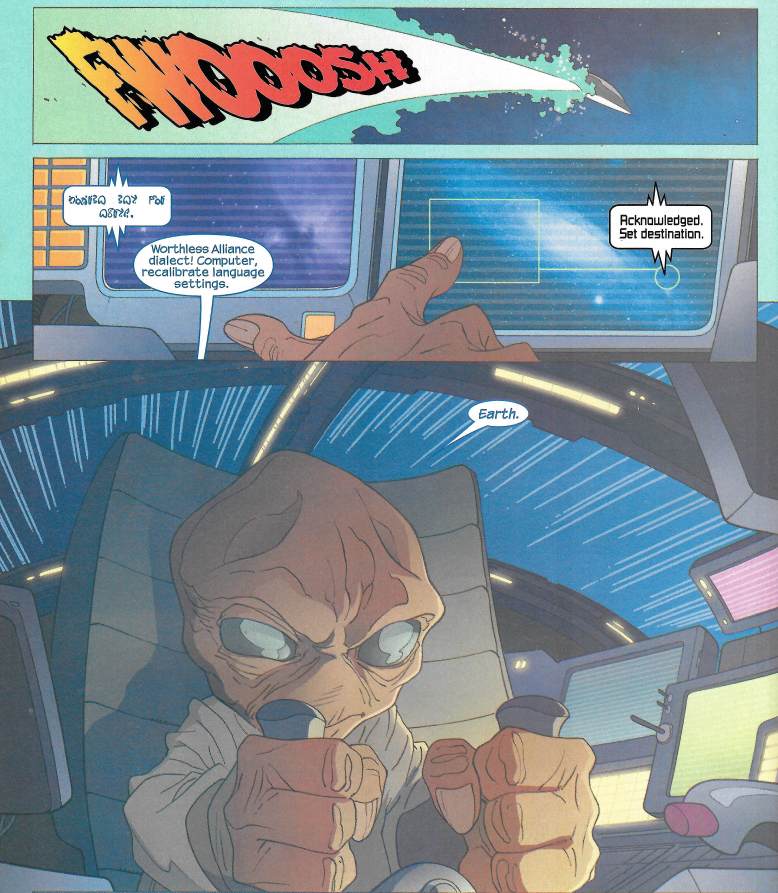 …to make it back into Vince’s life and screw up any chance he has of living a normal life.

Bah…not my cup of tea. It felt like it ran long and Vince’s struggles were more boring than engaging. I feel the book is heading for a bit of a shocking conclusion (the alien is a teenager, the “mission” he was on is not of galaxy-spanning consequences, the danger is as contrived as that dog attack in this issue, something like that) that the audience is supposed to find surprising. In short, the whole mess will come off as a kind of joke and the now adult kids will look smarter for having moved on. Something like that.

I just don’t want to be here when it does make it that far. Give me an old school soundtrack and the other Guardians of the Galaxy instead, please.
Posted by SonOfCthulhu at 1:17 AM