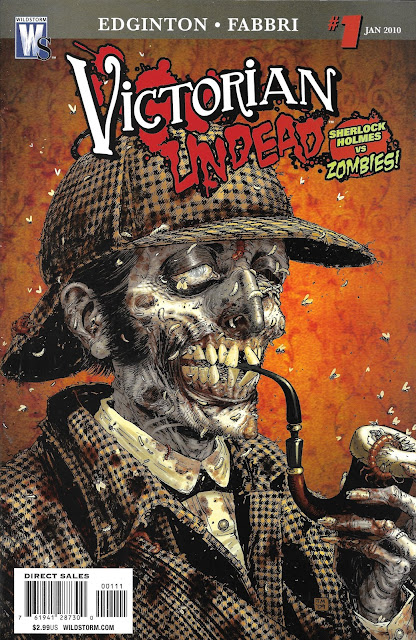 Slow start to a what should be an interesting match up

I’ve said before that I don’t mind world building for its own sake. As long as we get some story progression, wasting time with a little setup sometimes goes a long way. Especially if any of that wasted time has an unexpected payoff later on in the story.

The Victorian Undead (subtitled Sherlock Holmes vs Zombies!) is one of those slow burners that I hope has that endgame going for it. The first book wastes decades getting to putting Sherlock Holmes in the room with an actual undead and still I found myself looking forward to what the story might turn into. There were enough thrills along the way that I thought the book held some promise.

Audiences must have thought so too. The original six issue series got a nod from the Rondo Hatton Classic Horror Awards, receiving a nomination for Best Horror Comic Book. The book was up against stiff contenders like Locke and Key, The Goon and Hellboy. Inexplicably, Batman: Gotham After Midnight took top honors somehow. Not even certain that book is horror, although I’ve only read Crapbox bits and pieces of it, including the ending.

The Victorian Undead series got two sequels and was popular enough for DC to continue publishing the final issues after Wildstorm folded/was brought into the fold. Look hard enough and you can find collected editions of the zombie-filled first arc and the follow up trade of vampire vs. Sherlock second series match up. 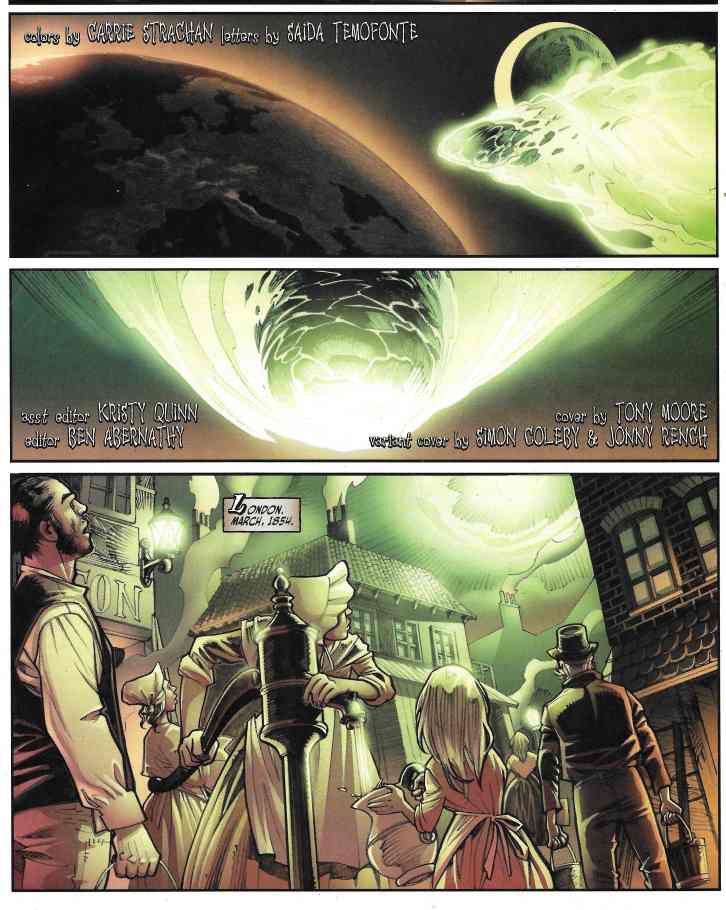 We begin with a green glowing comet thing coming down in the upper atmosphere. And before any of you make a Superman-Kryptonite comment, yeah I already went there for you. 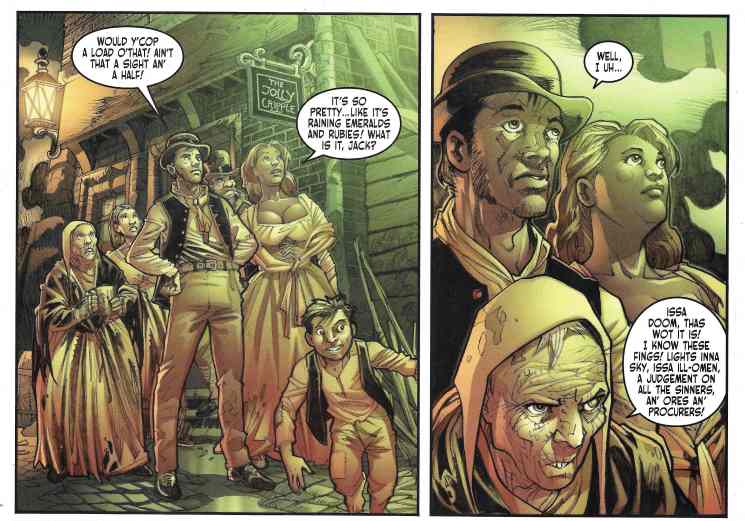 This is central London way back in 1854, which makes it a little early for Holmes to be involved. He’s not born yet, even. What we do have is lots of extras on hand, including normal working English laborer, whore, young girl we hope doesn’t grow up to be a whore, and spooky old one-eyed mystical fortune-teller lady of Doooooom!

They discuss the night’s pyrotechnics with old woman foretelling that they will all die horrible deaths because they are all sinners. The gent has none of that kind of talk but that doesn’t keep old woman from betting her good eye to the young girl that doom is coming for them all. And you know what? She’s correct. There’s even a tip in the flash of light that strikes the well pump that all of them use for drinking water. All of these characters are pretty much fucked. 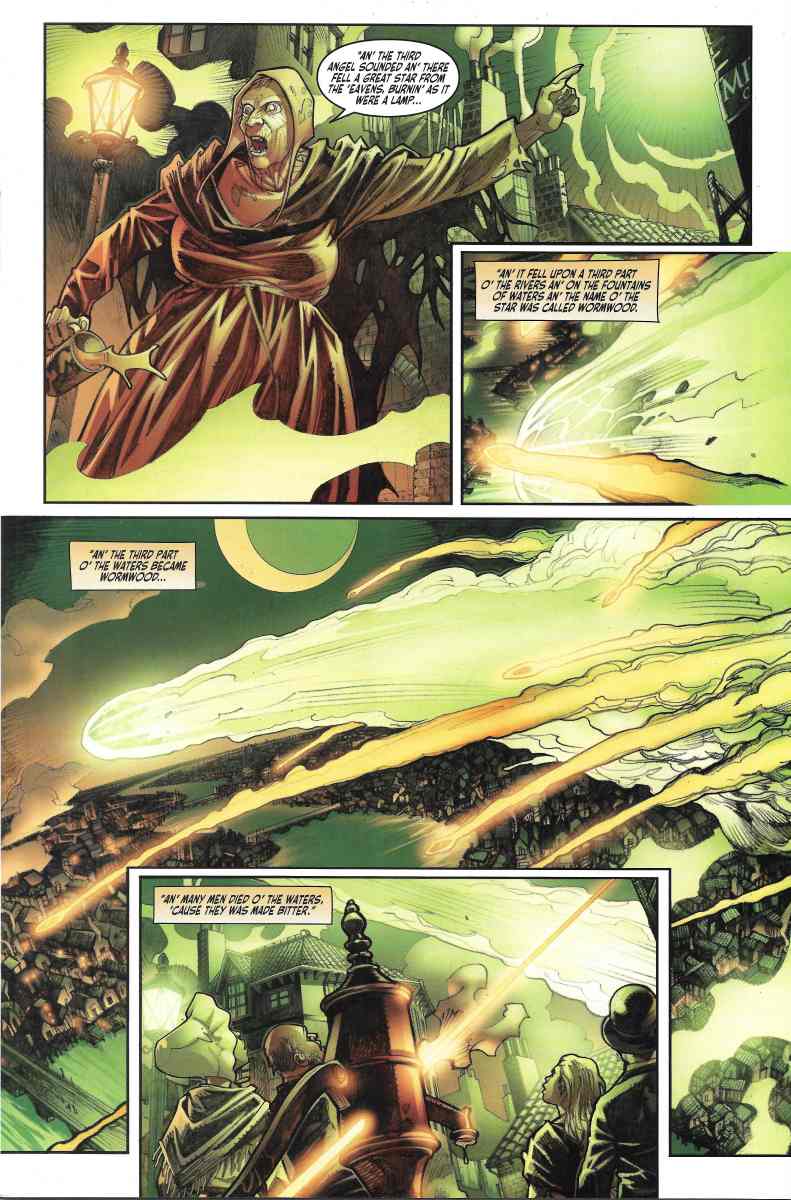 If only we listened more often to the rantings of crazy societal outcasts, everything would work out so much better. Instead… 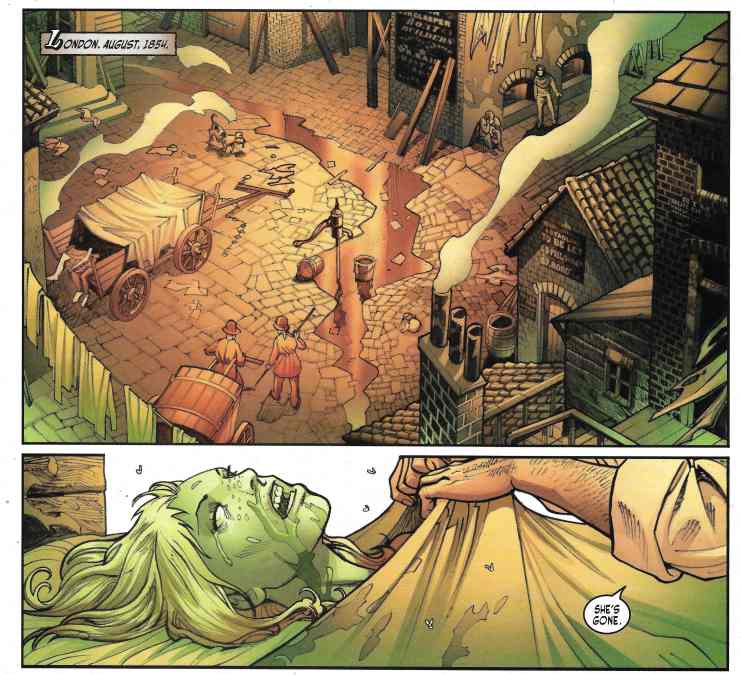 Within a handspan of months, that young blond girl is dead, her skin an unhealthy greenish cast. The date and cause of death is being reported to the local priest by this young doctor… 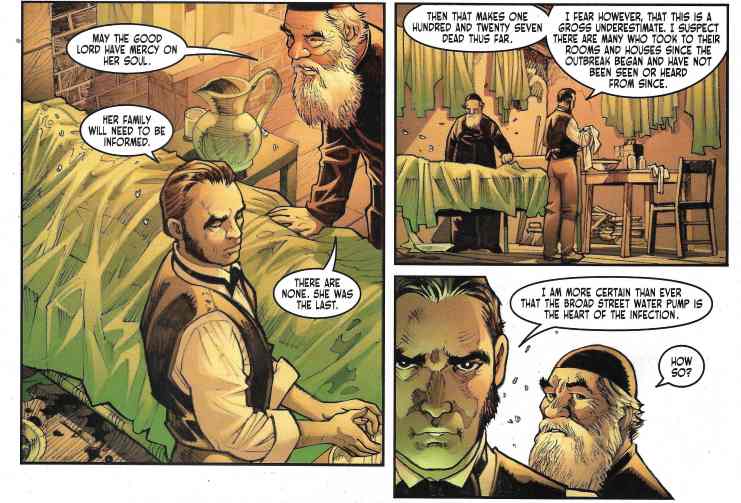 …a very sharp young doctor at that. Someone who understands pathogens and the methods they travel under. He knows something is wrong with the water supply, just not from the causes he’s citing. The priest lets him in on the odd goings on with the dead in the area and what the local residents were doing to combat them. His reaction is disbelief. 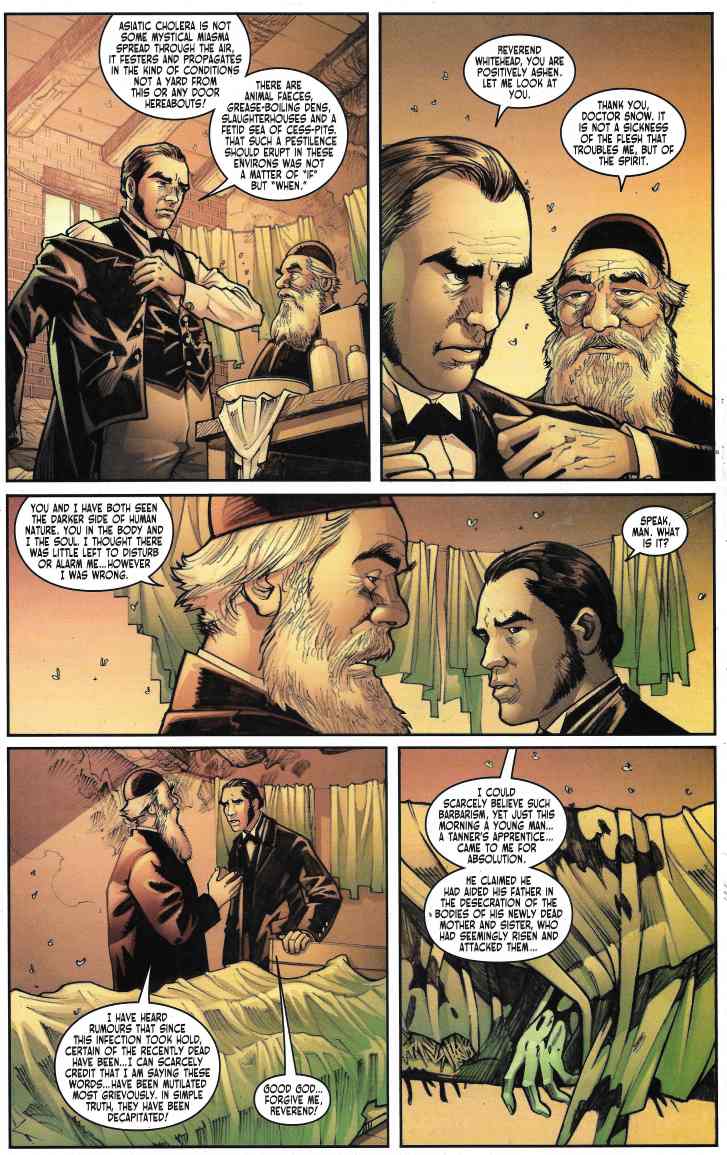 But this strange afflication becomes apparent when… 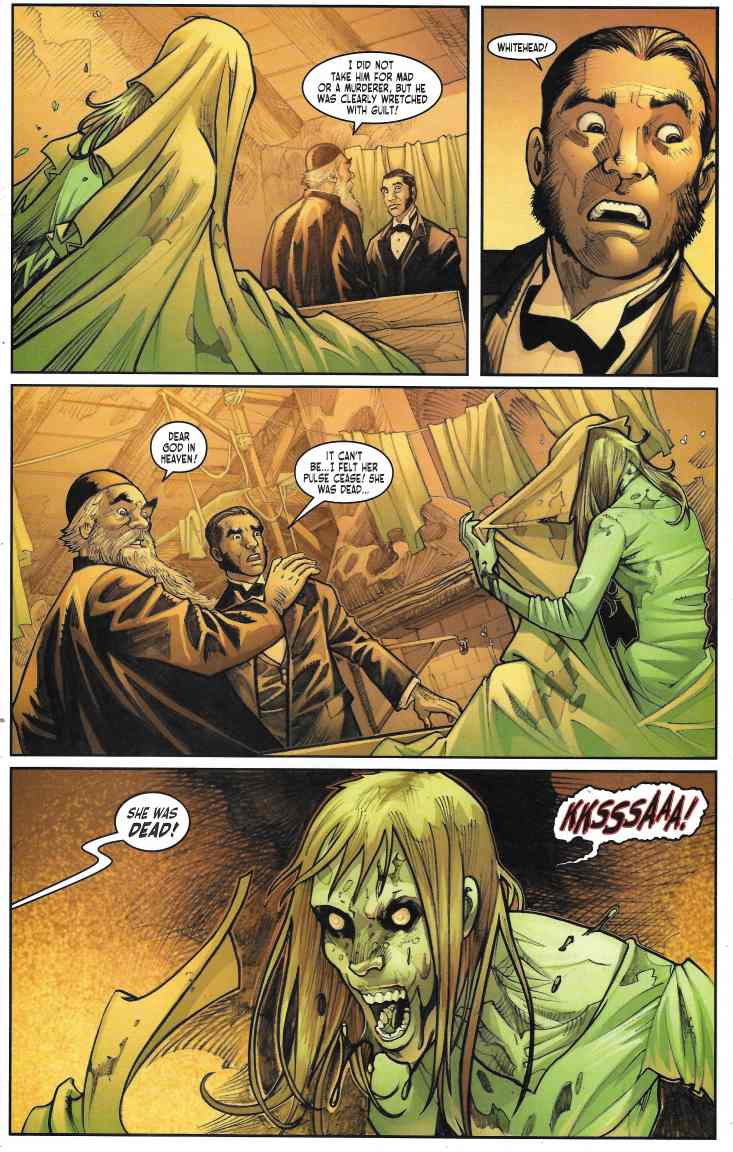 Then we jump forward in time almost fifty years to near the turn of the century with these two gentlemen heading into an exclusive club accompanied by this dandy salesman/concierge. They pair are asked to trust this person implicitly and tell him all their darkest secrets. If they do so, he will bring them those desires. I’m nicknaming him Google since he isn’t tossing his name about. 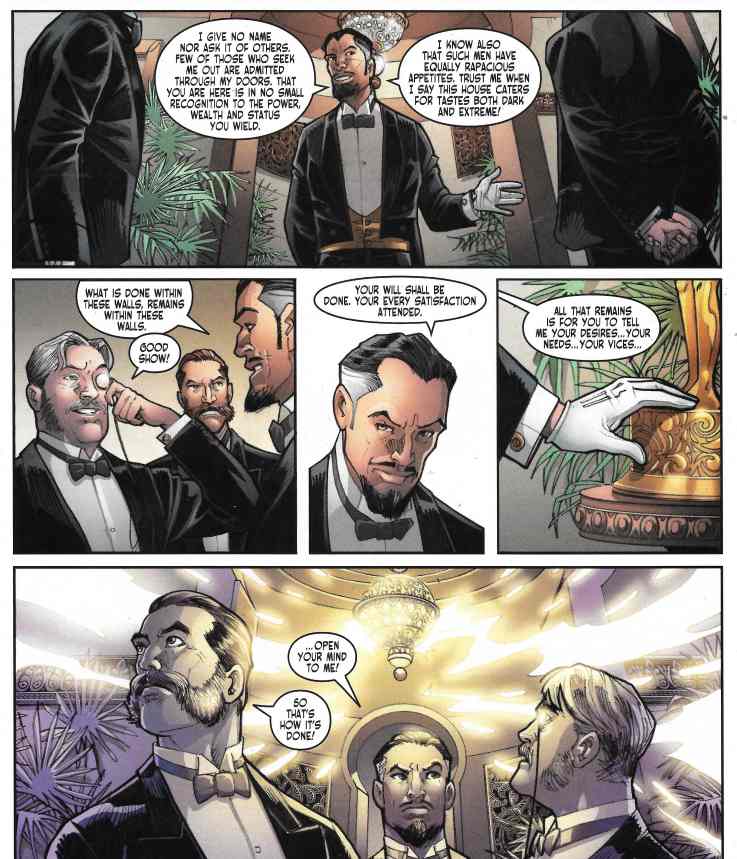 And then he activates a button on a lamp and the room is bathed in scintillating lights. Lights programed to mesmerize, hypnotize, and incapacitate. It works on the gentleman with the monocle, who we realize is Watson. But on our disguised Sherlock Holmes, the rays have no effect. 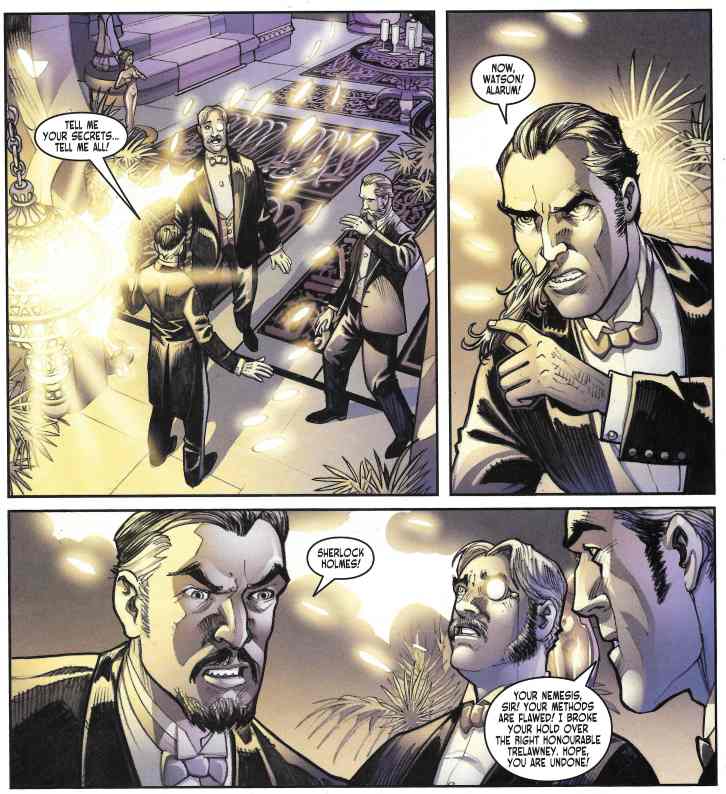 So, the butler tries a more direct tactic of taking him out. 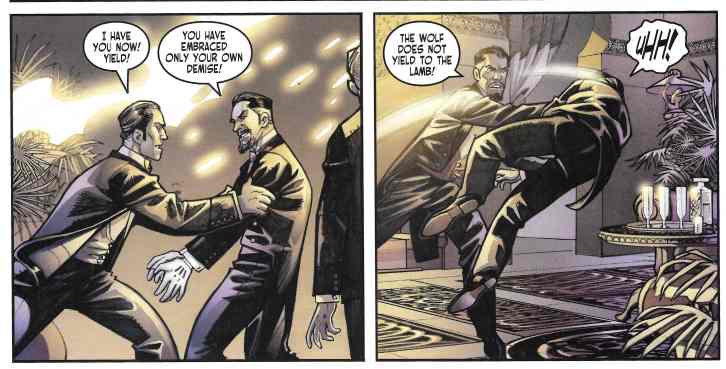 …which is actually looking to be VERY effective. Holmes might BE one of the dead in just a few moments, if not for the effect his cane has when hurled against Google’s hypno-ray lightshow. 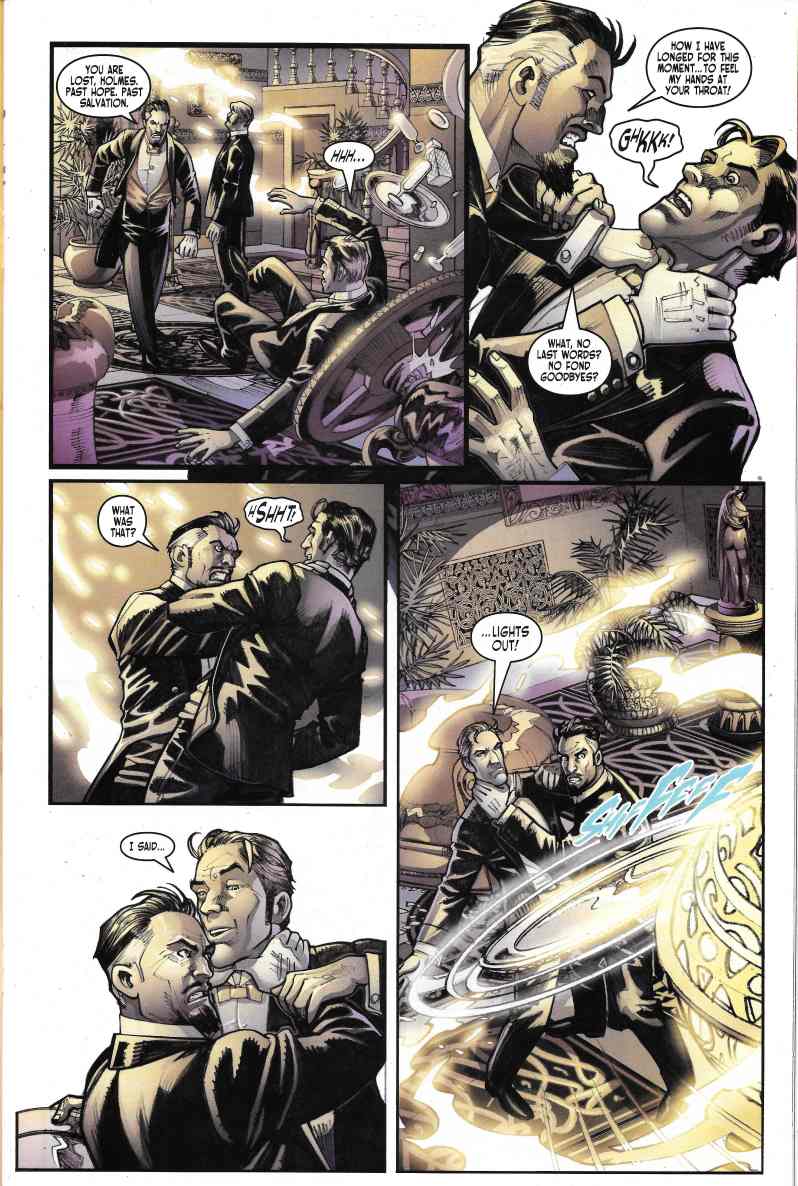 Watson quickly comes too and first threatens then shoots their very inhospitable host, Google. In an unlikely turn of events, Google shows himself to be a robot. 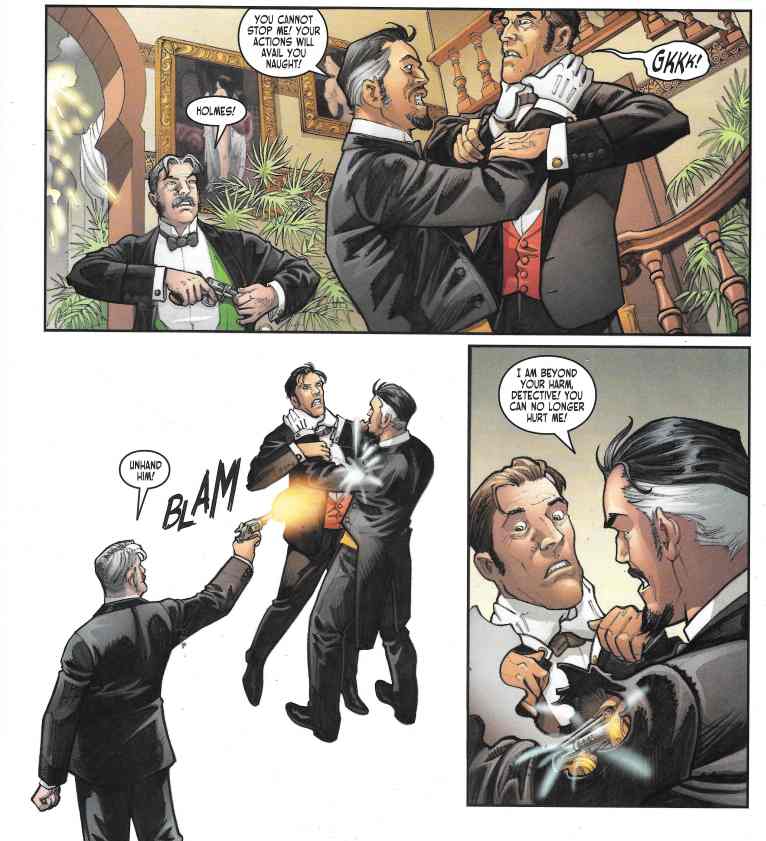 At which point Watson just unloads on him. The pair of detectives discuss this resolution of their current case, with Holmes relaying that this automata was moving under the guidance of a another person, someone who has likely gotten away while the pair struggled to overcome the mechanical man. (I’ve got dibs on it being Professor Moriarty). 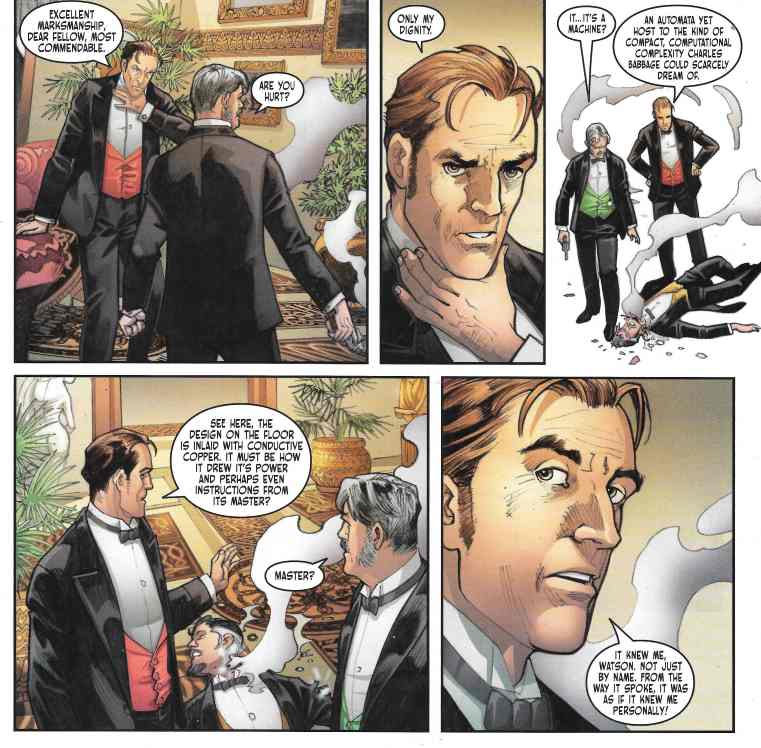 From there we shift to the next day, as two subway tunnel workers find a ring (and a corpse) while stinging lights down the line for the other workers to follow. 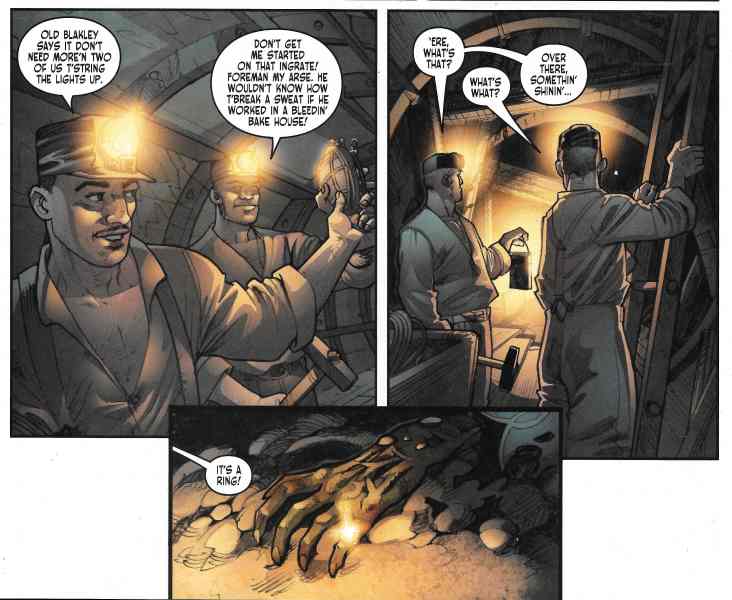 Ron is hot to secure the valuable off this unexpected find before anyone else sees it. His companion cautions him against touching the body, which looks like it has been down here far too long to be some recent murder. Ron sets about procuring the ring and instead procures something far worse… 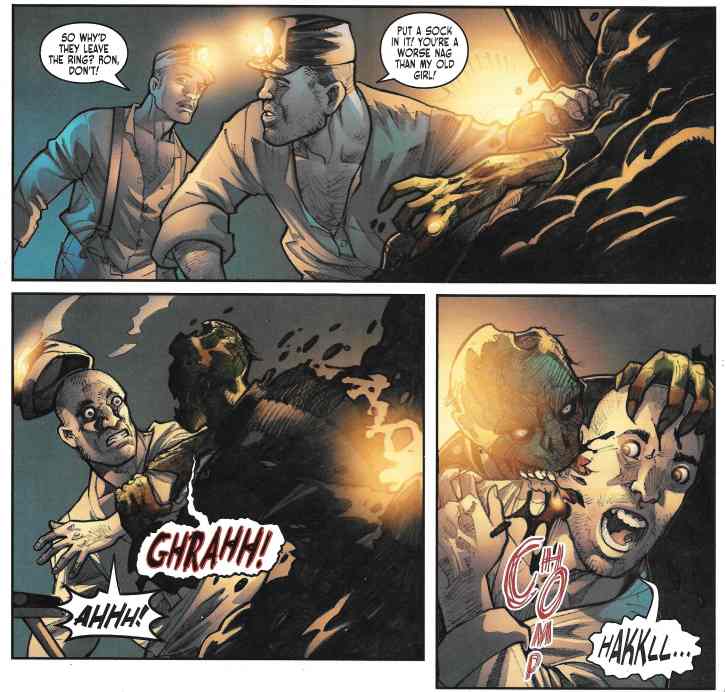 …a deadly bite from the rotting corpse.

His unnamed companion dispatches the foul remains, but not before Ron starts to convulse and falls to the ground, prone and looking the worse for wear. 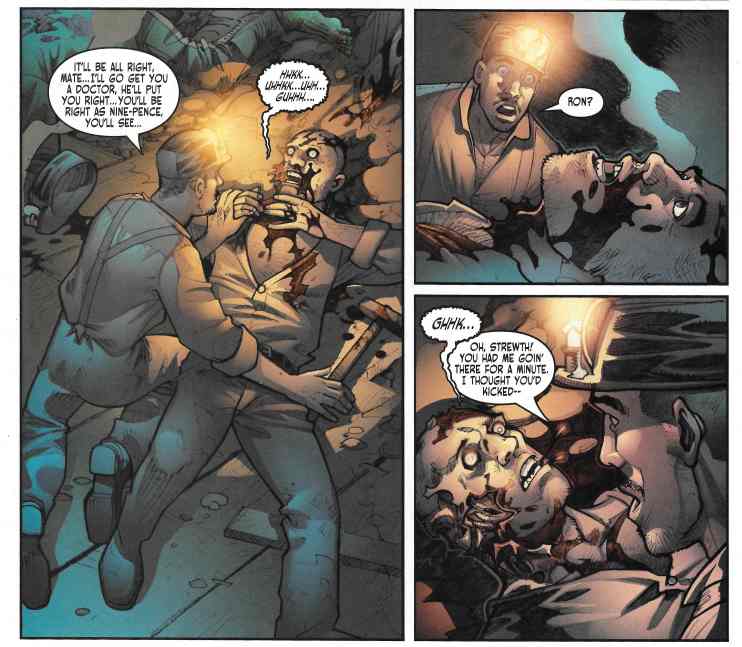 As you are all expecting, that bite was instantly fatal and now Ron, infected with the zombie virus rises up to feast upon his former friend... 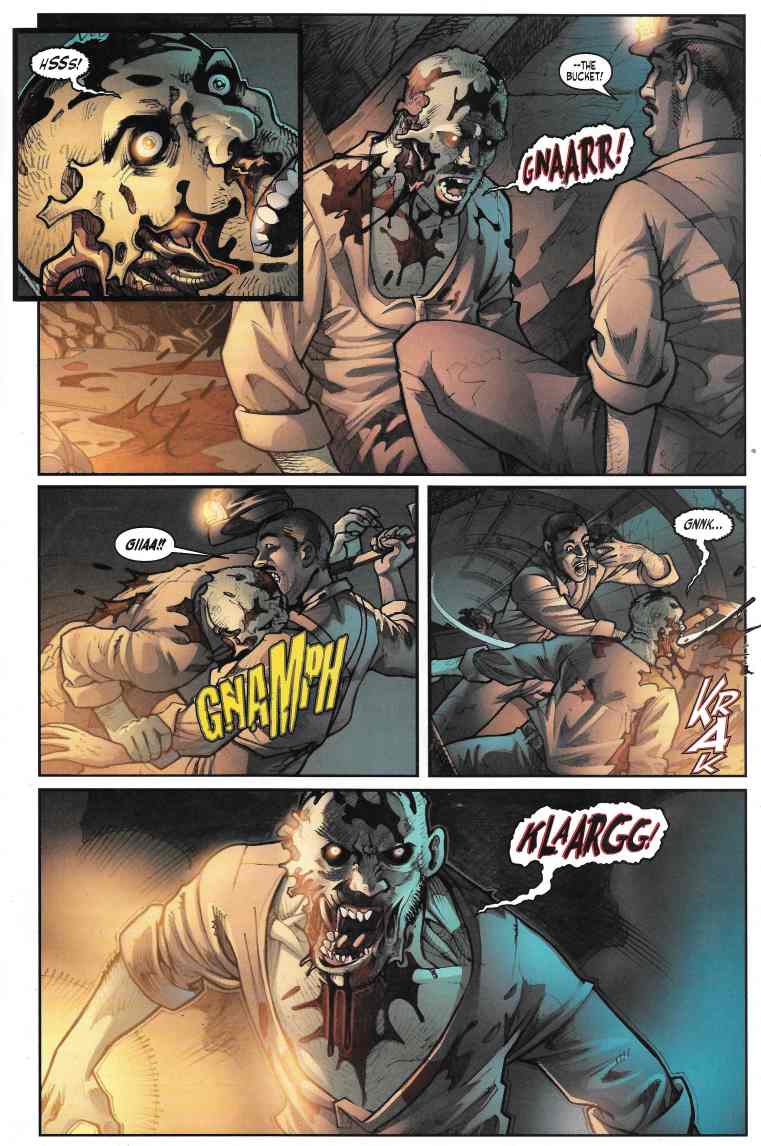 Sadly, first blood goes to Ron Zombie, dooming his fellow workman to a similar fate. But not so fast now, as companion number two fights off Ron for a bit… 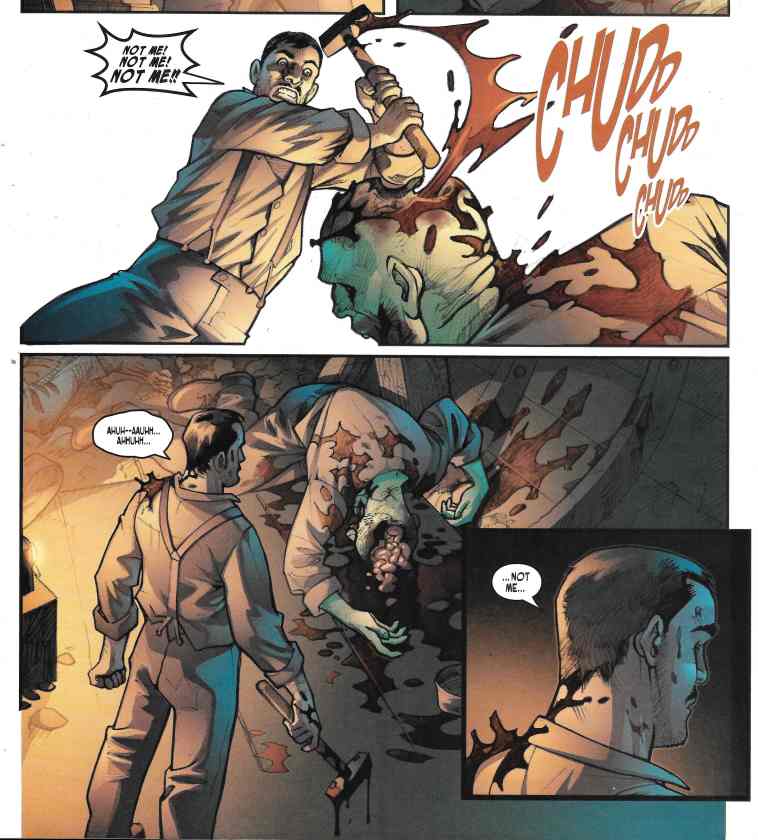 …and ends up off the menu for the moment. That hollow ending of “not me” only means he’s infected too.

We shift the scene to later that same day, as Holmes works on the robot head, in blissful astonishment at how advanced it is. He is also attempting to learn as much about their foe as possible. Watson demurs from watching his progress, becoming unsettled by the way the automata’s eyes seem to follow him around the room.

Both men are surprised when Mrs. Hudson delivers a letter from Inspector Lestrade requesting their urgent presence. Reluctantly, Holmes drops everything at the tone Lestrade sets in the missive. 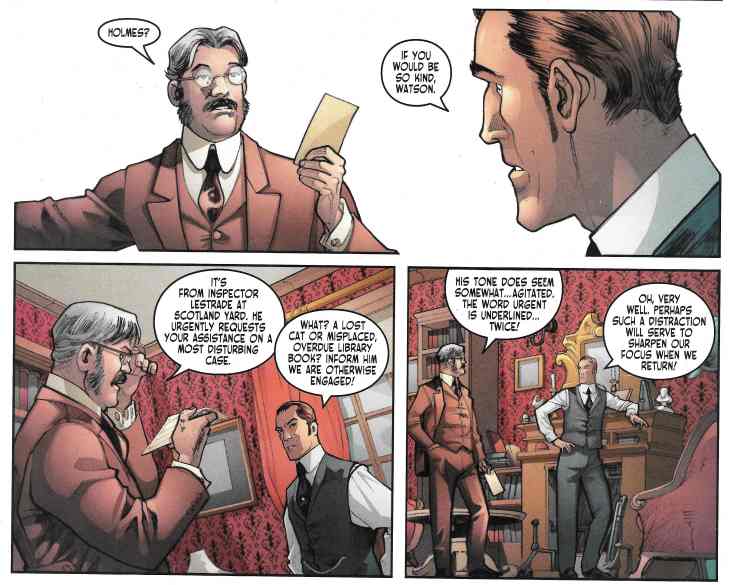 The pair are met by the inspector at Scotland Yard, where he weaves a very strange and fascinating (although almost completely wrong) tale that completes the story of the two subway workers… 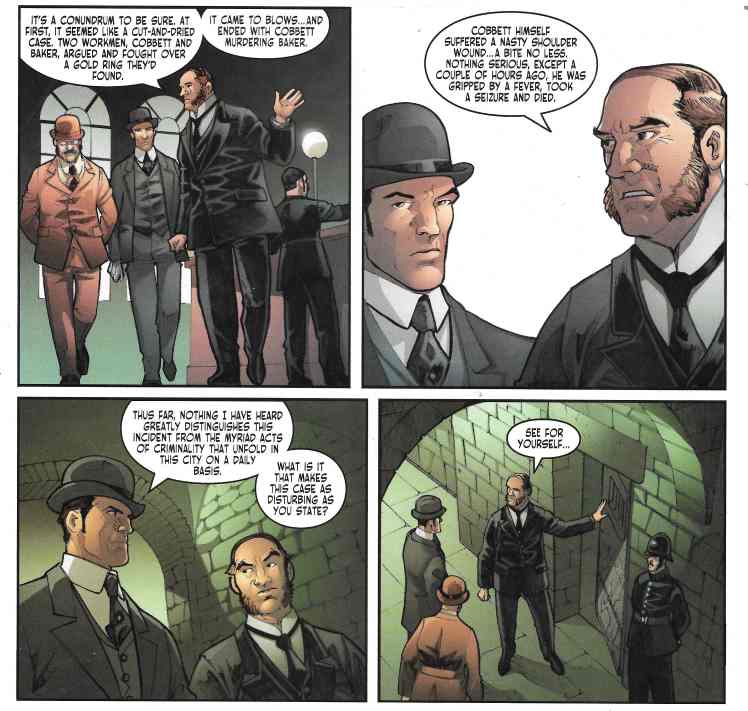 Holmes may not have found that part of the story intriguing, but this next bit certainly does crank up the strange allure of this case. 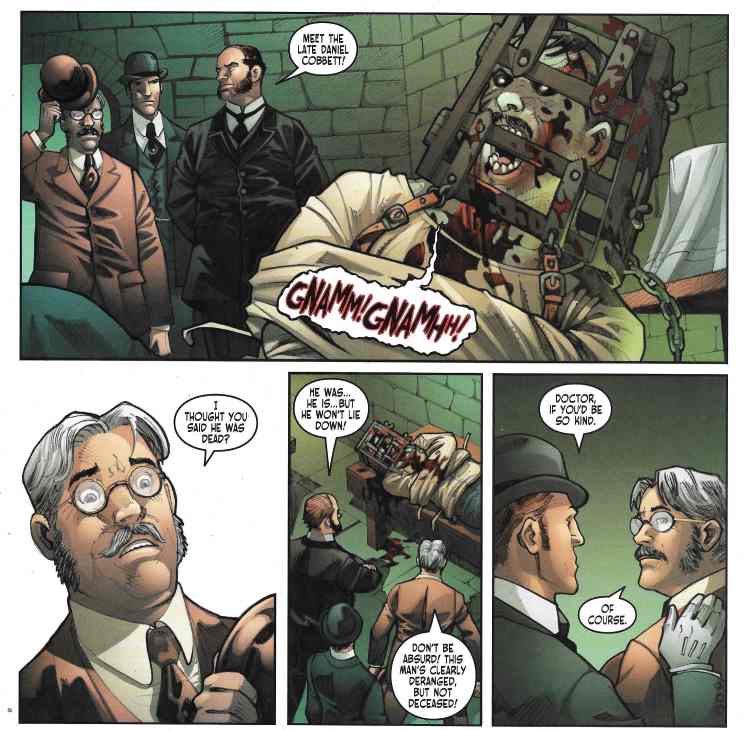 And of course, Dr. Watson confirms that the man is not actually alive. Which is a condition shared by the initial person who started this run of the contagion ending the life of the two men, now reduced to a head in a jar. 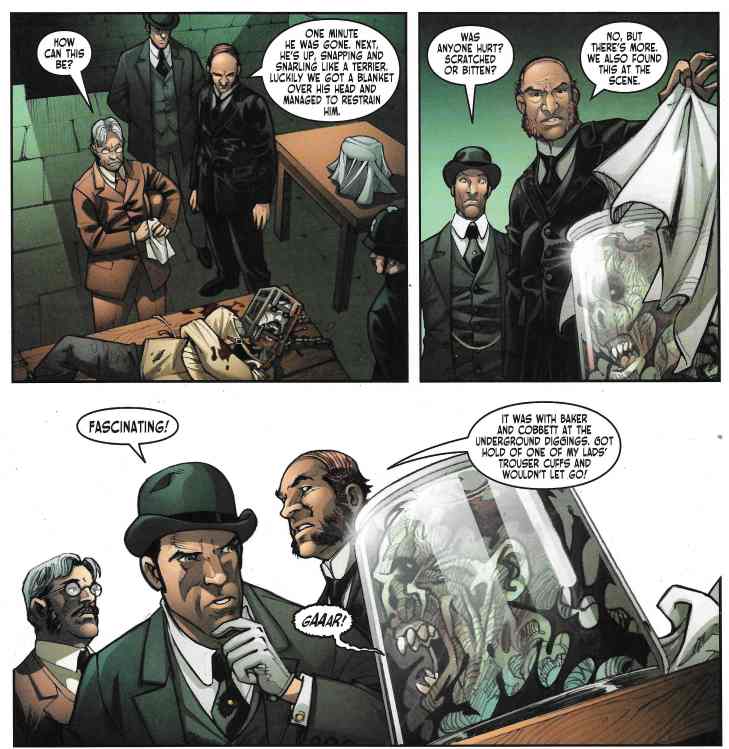 However, before our intrepid pair of private investigators can make any more inquiries, Lestrade finds he has visitors… 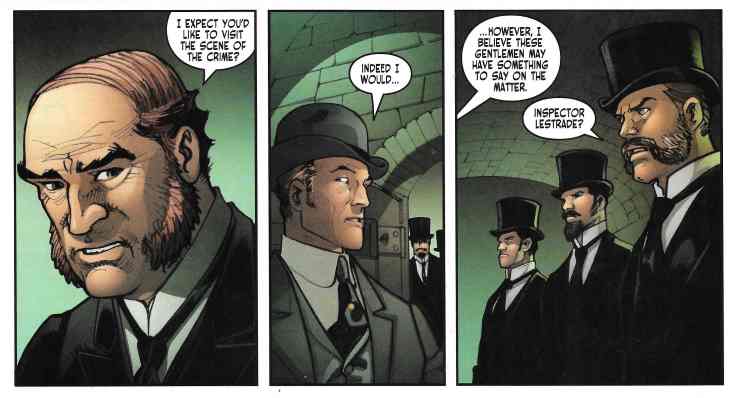 …who shutdown Holmes’ access to any and all materials surrounding this case. I’m certain that will only heighten his interest in the mystery the inspector has uncovered. 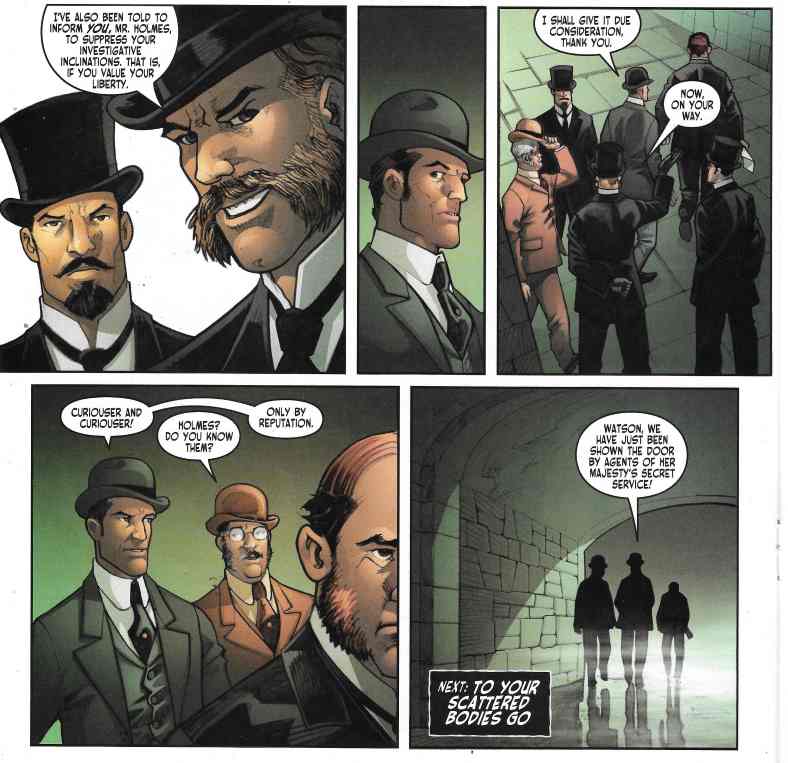 Even though the men they just met that told them to stop are the precursors to James Bond.

Great slow start to this issue and I’m glad it isn’t a full blown “Holmes in a zombie apocalypse” shit show. I think the mysterious automata creator will end up factoring into things in just a bit, but for now the story has my interest. Should have yours as well.
Posted by SonOfCthulhu at 2:45 AM