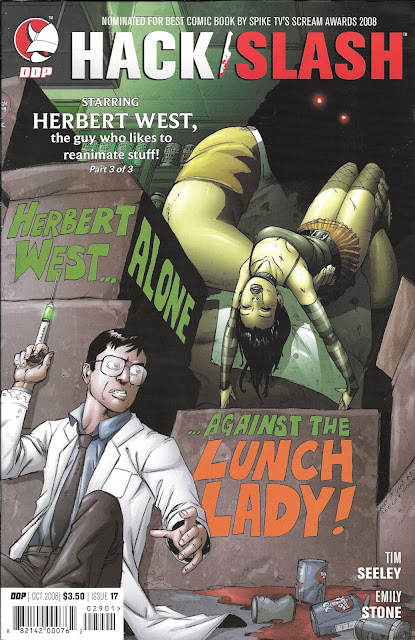 Where do we begin with this one? So much to unpack here.

Let’s start with the title I suppose. Hack/Slash is a long-running series from writer and occasional penciler Tim Seeley. The story follows Cassie Hack, a horror victim bent on stopping a variety of monsters and monster-types who prey on teenagers. These oddball serial killers and demonic minions are known as “Slashers.” She is aided in this quest by her companion Vlad, a misshapen brute she originally mistook for a slasher. Together they have “Supernatural’ed” their way through two volumes of adventures at two separate comic book companies.

That traumatic event that compels Cassie to hunt down the slashers? Her mother murdered several of her classmates who were bullying Cassie and then took her own life. She rose from the dead (for the first time) as a slasher known as “The Lunch Lady”. Cassie was forced to gun her down and now wanders the country helping others faced with similar menaces.

And in her travels she has bumped into the other part of this strange team-up: Herbert West, the titular Reanimator from H. P. Lovecraft’s tale of the same name. Or at least the more modernized Jeffery Combs version of West, with contains his green-reanimator goo and his penchant for not seeing how much harm he is doing by bringing the dead back to life.

As for that, West recently brought back Cassie’s mother, THE LUNCH LADY herself, with a slightly altered version of his serum. This time the dead person didn’t come back a mostly mindless zombie, it appears, but that state and their looks are based upon being injected regularly with a second, red vialed serum.

Last issue, Cassie reunited with her estranged father, Jack Hack, who worked for a branch of government that first attempted to destroy, and then decided to study, the slashers. Dubbing them revenants, the government had Jack develop a method of determining who would become a revenant after death. Through the method, Jack met Delilah, Cassie’s mother, but unexpectedly fell deeply in love with her.

Knowing he could never submit her as a guinea pig for the revenant project, Jack took Delilah into hiding with him. They had Cassie and then Jack was found by government agents. At first they wanted only for Jack to continue assisting them, but eventually they drove him to fake his own death when it became too much. Jack had decided to work to rehabilitate revenants over his time outside of the government culture.

Thus Jack and Cassie finally spend time reconciling their past in the last issue. Then West reanimates Delilah in a bid to keep Jack working on the project to rehabilitate revenants worried that Cassie will steal Jack away from him. Then Jack discovers Delilah in West’s basement tied up, so chaos ensues which leaves West, Cassie, and Vlad working together. The object of their search is Delilah who has stolen Jack away to a combination diner/motel down the street so that she could… 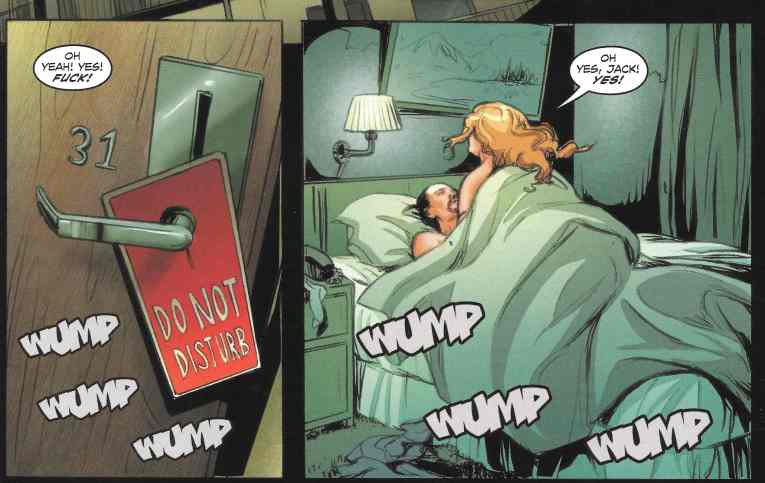 ..well, that’s not really a problem right? Jack really loves Delilah, even if she is some kind of revenant. And things are going swimmingly until… 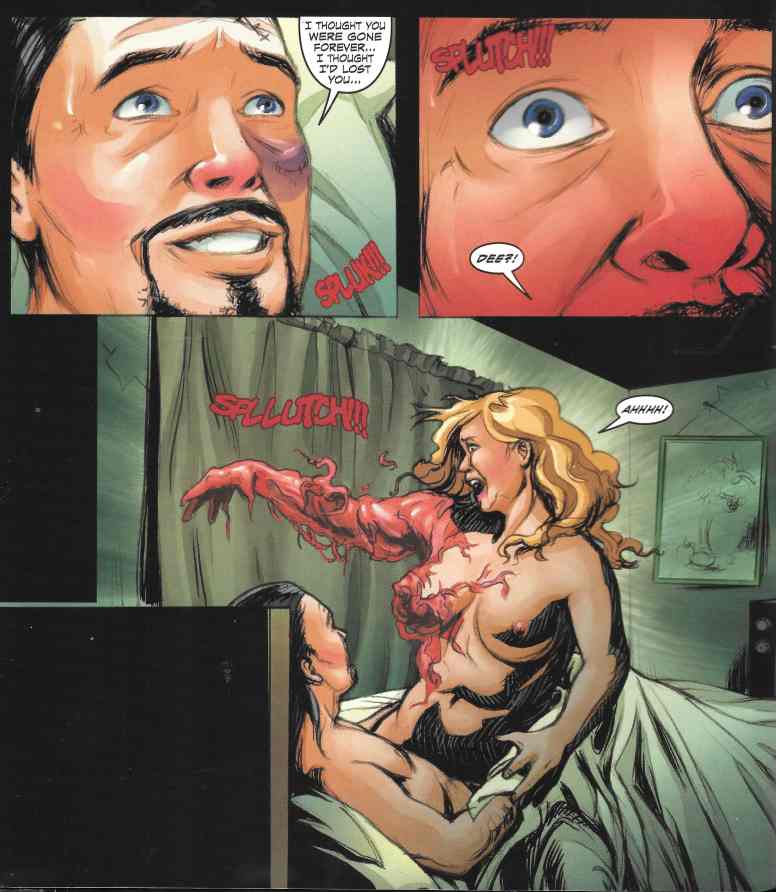 …woah! Boner kill. Seriously though, Delilah is going through withdrawals of the second of Dr. West’s serum. Jack tries to comfort her with encouragement that maybe West can make her stable, but Delilah is already too far gone for that. 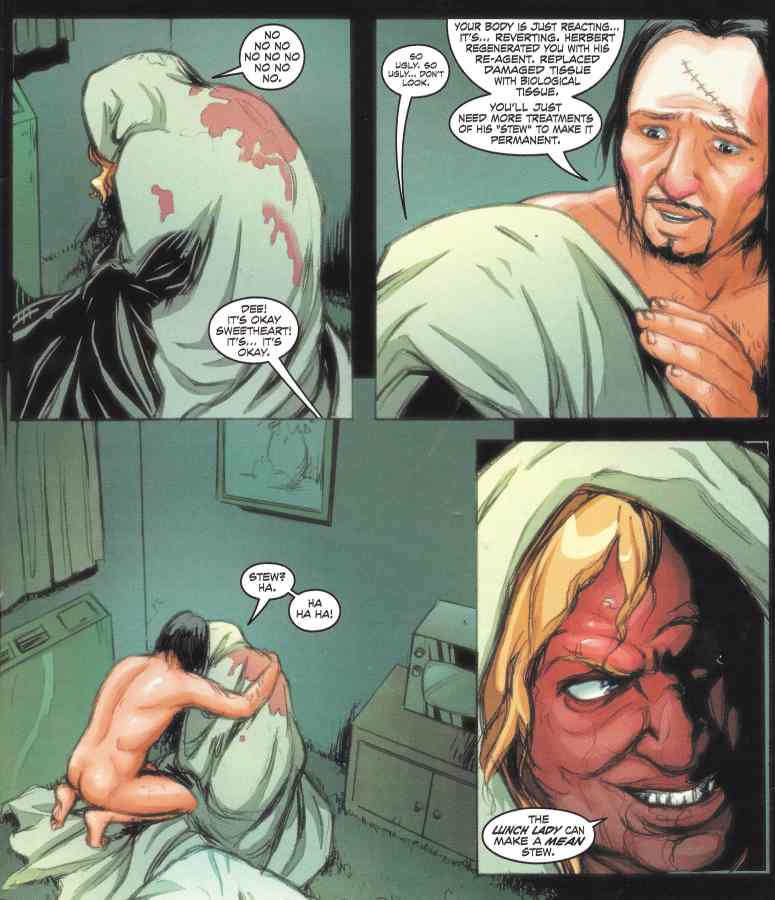 We get a one page interlude from another dimension with a tentacle god sending a scantily clad tusked warrior female to kill Cassie and Vlad for slights they have inflicted upon their plans in the past, none of which is relevant so we’ll just skip ahead.

Ahead to where Jack is having little luck in controlling Delilah, who breaks into the diner and starts murdering people, beginning with this poor cook. 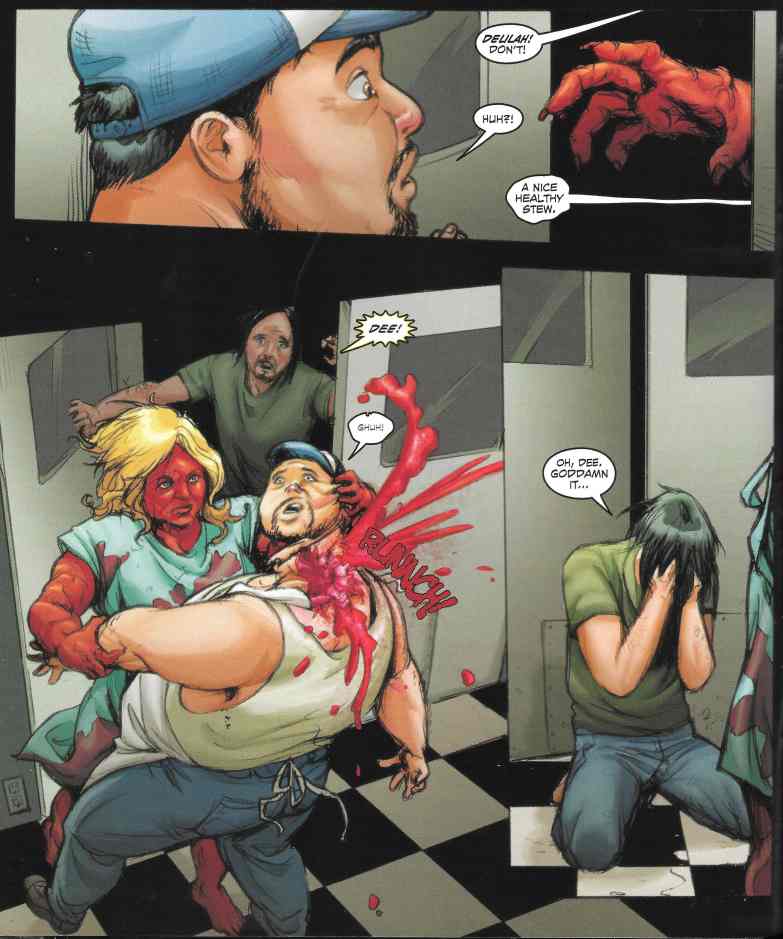 She keeps saying that she knows that Jack wants her to look good and well, lots of crazy stuff. It looks like she isn’t done with her rampage of death, with this helpless waitress next up on the “menu”. 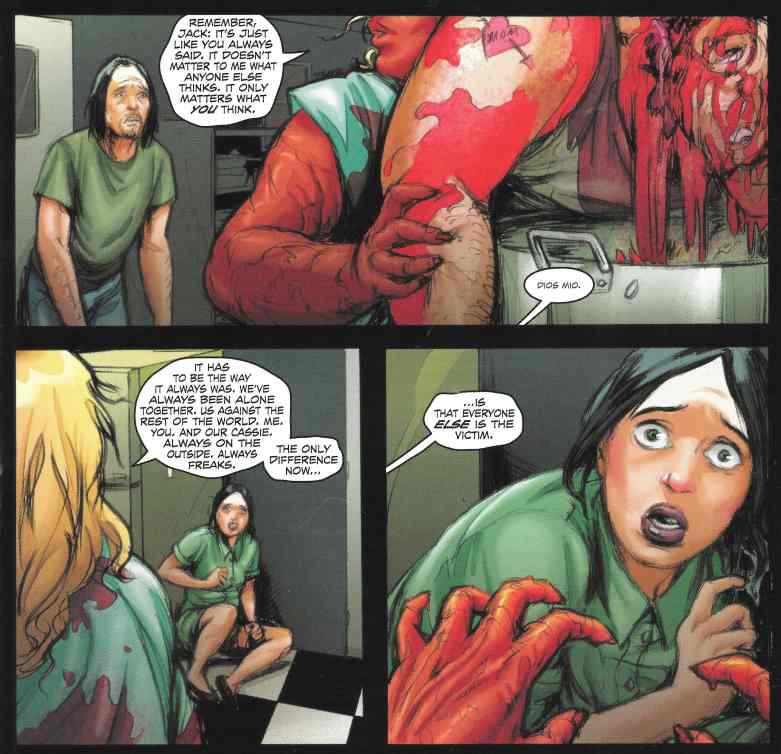 Remember when I said West had teamed up with our Hack/Slash heroes. Well that wasn’t entirely accurate. More like forced to cooperate under extreme duress, as seen here, fits the bill. 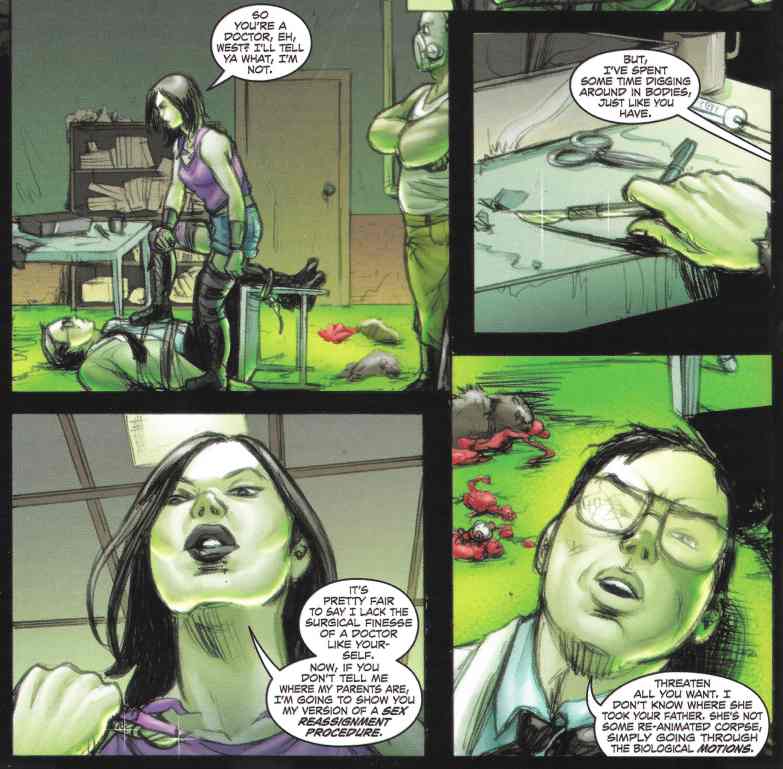 I love that the book gets the writing of Combs’ West so much that you can hear his monotone inflection even in the face of being helpless and stabbed. Combs really hammed it up as Herbert West, but in a weird, calculating way that made you feel he was beyond worrying about death or dismemberment. He was cold and calculating, the very epitome of demented mad doctor who can’t recognize the atrocities he is committing in the name of science. 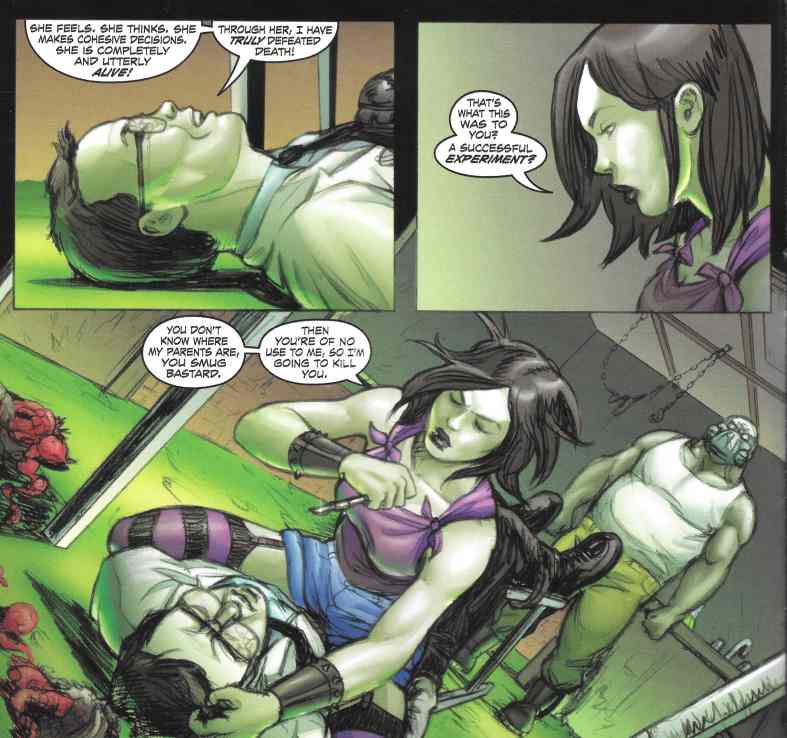 Not that this will keep Casey from doing our favorite reanimator in permanently. But this might… 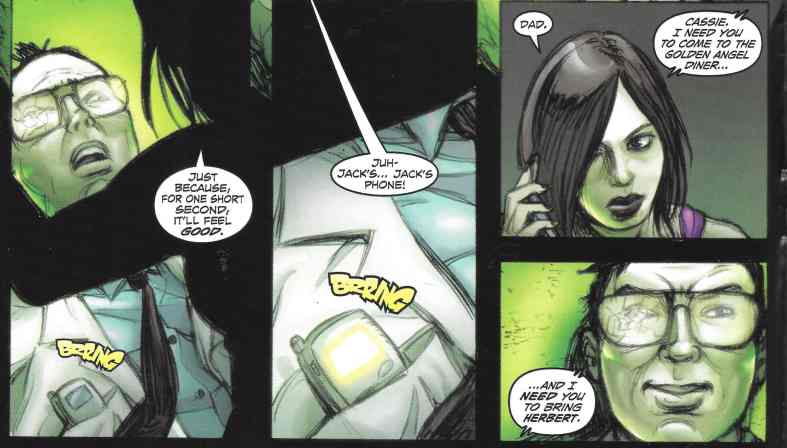 That would be Jack’s desperate plea bargain for the young lady’s life that Delilah is threatening, which appears to be somewhat of an ongoing concern at the moment. 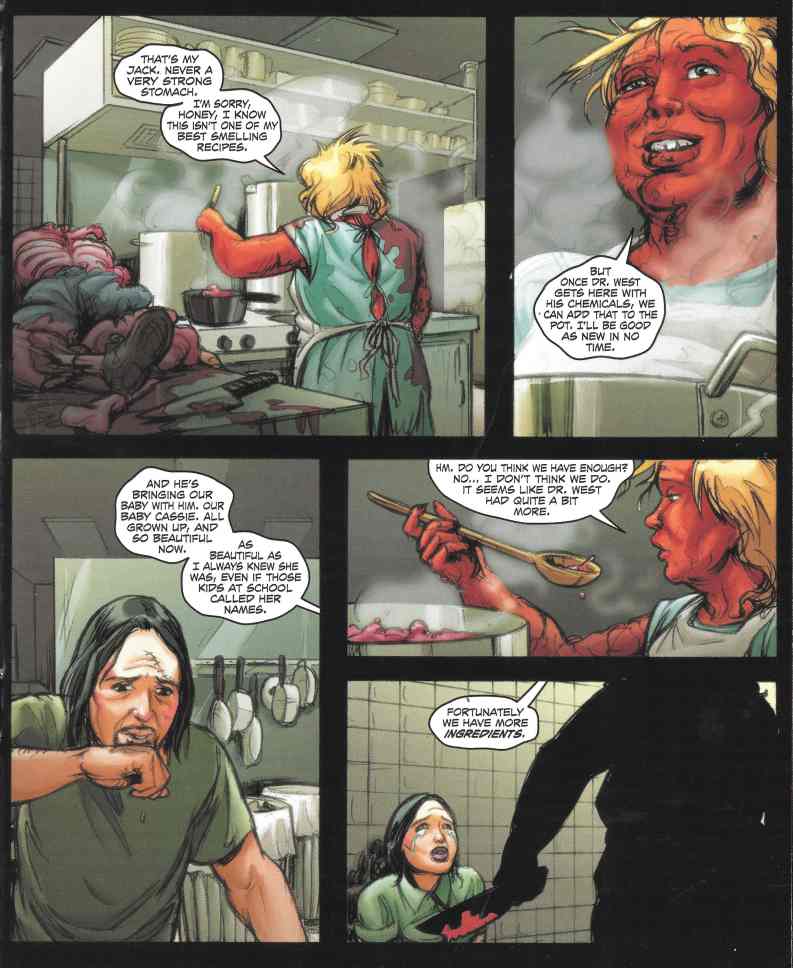 Jack tries to dissuade Delilah from killing the girl by distracting her with an offer of sex. Unfortuantely her gruesome appearance so turns his stomach that he reacts poorly with his amorous advances that she goes to kill the poor woman… 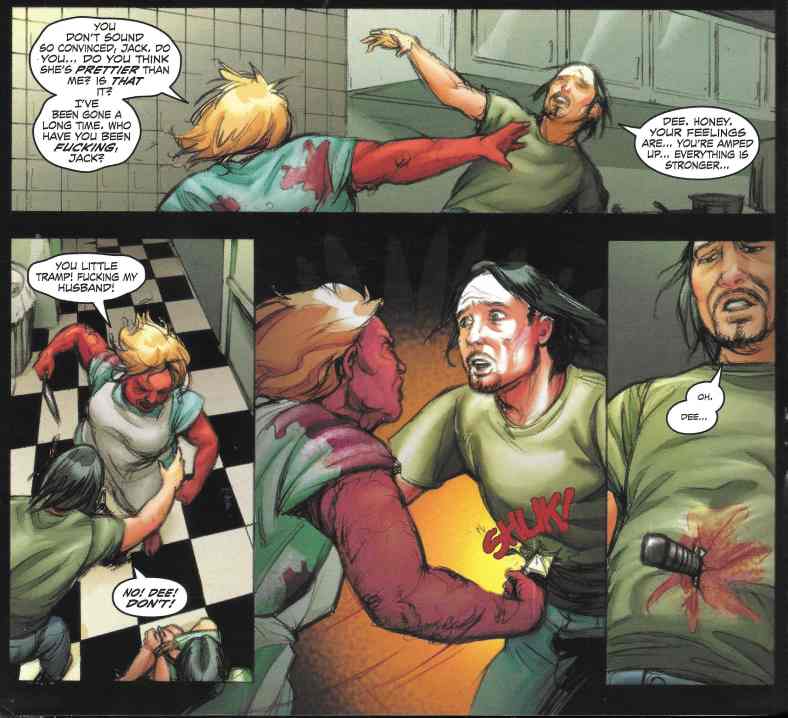 …and Jack takes the knife instead.

About this time West and the Hack/Slash crew show up. West is extoling the virtues of Cassie’s Father, assuring her that he does not want him to get hurt and that he respects him as a doctor. The standard “West just doesn’t see the damage he is causing to everyone around him.” When all of a sudden… 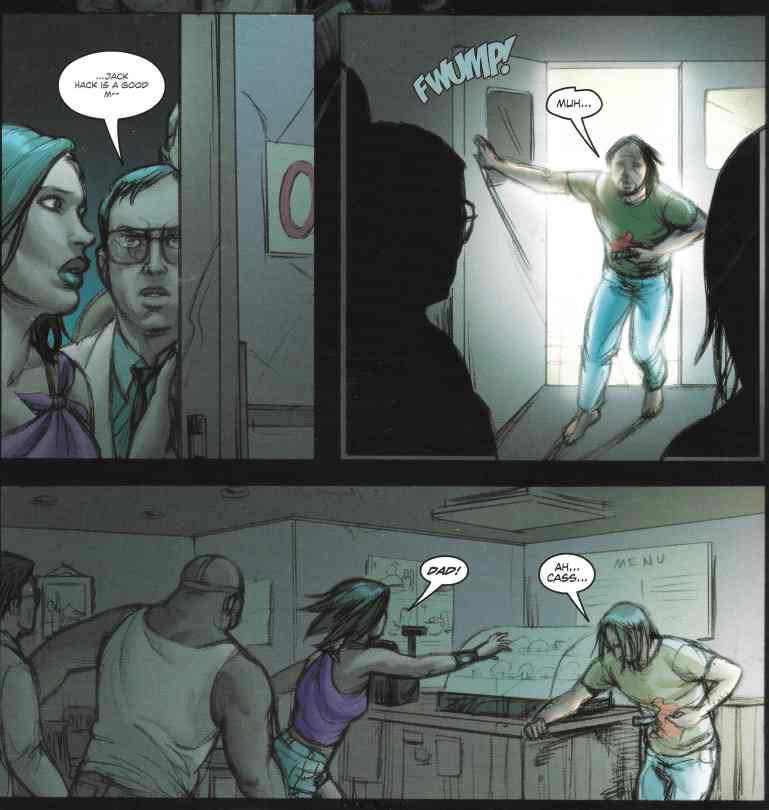 All this starts to go a bit sideways: Vlad ends up holding Jack’s fatally injured body, West is nabbed by Delilah, and Cassie… 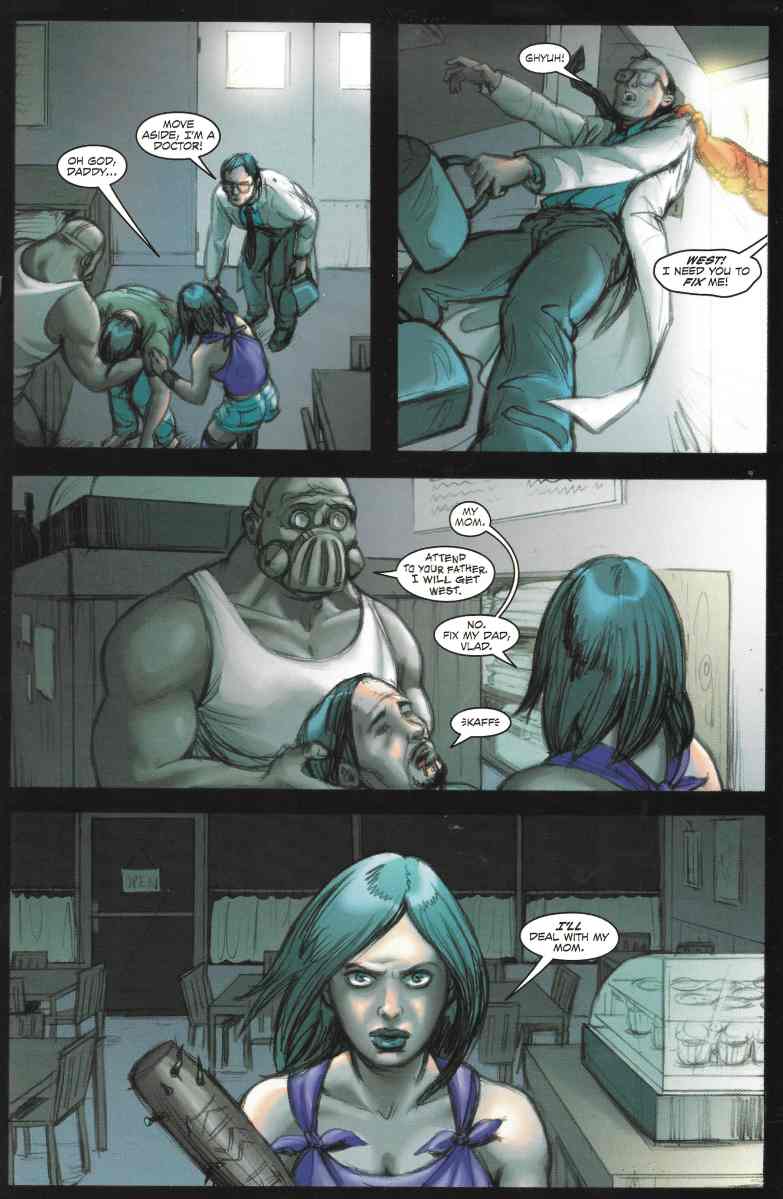 Cassie goes in to confront this madness and illogic… 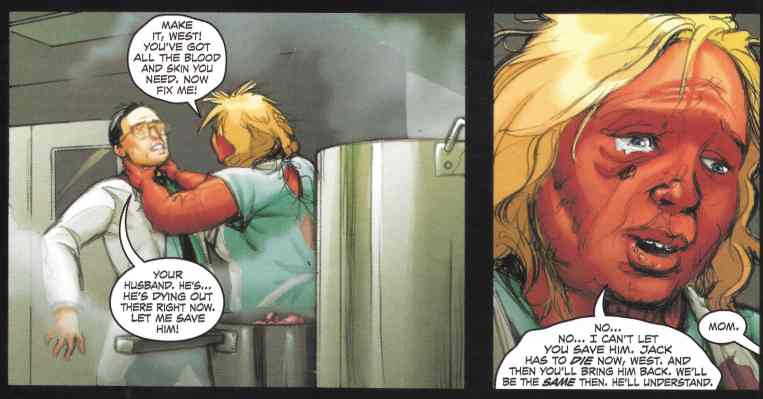 Cassie, tempted though she might be by all this, steps up and does… 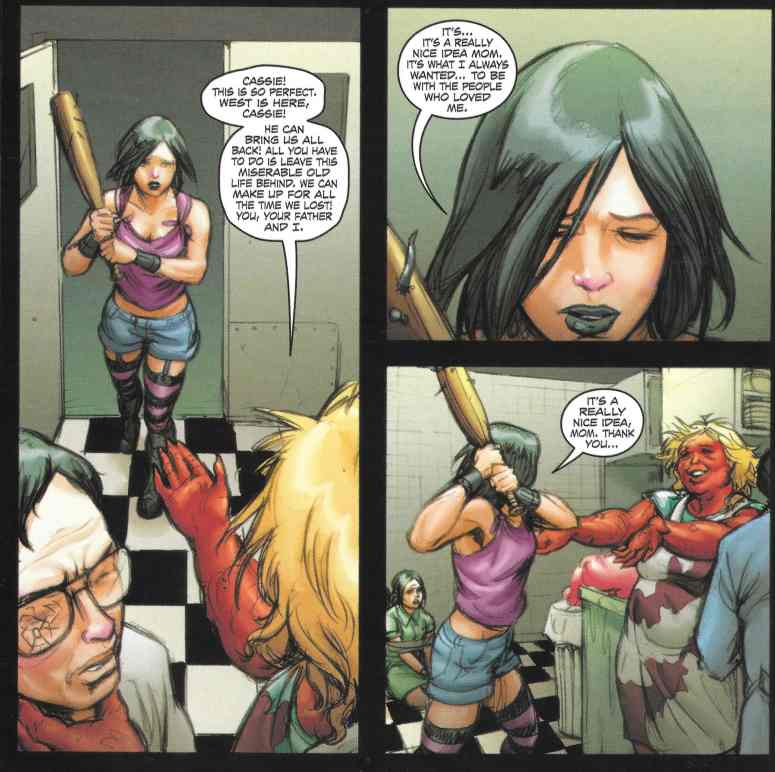 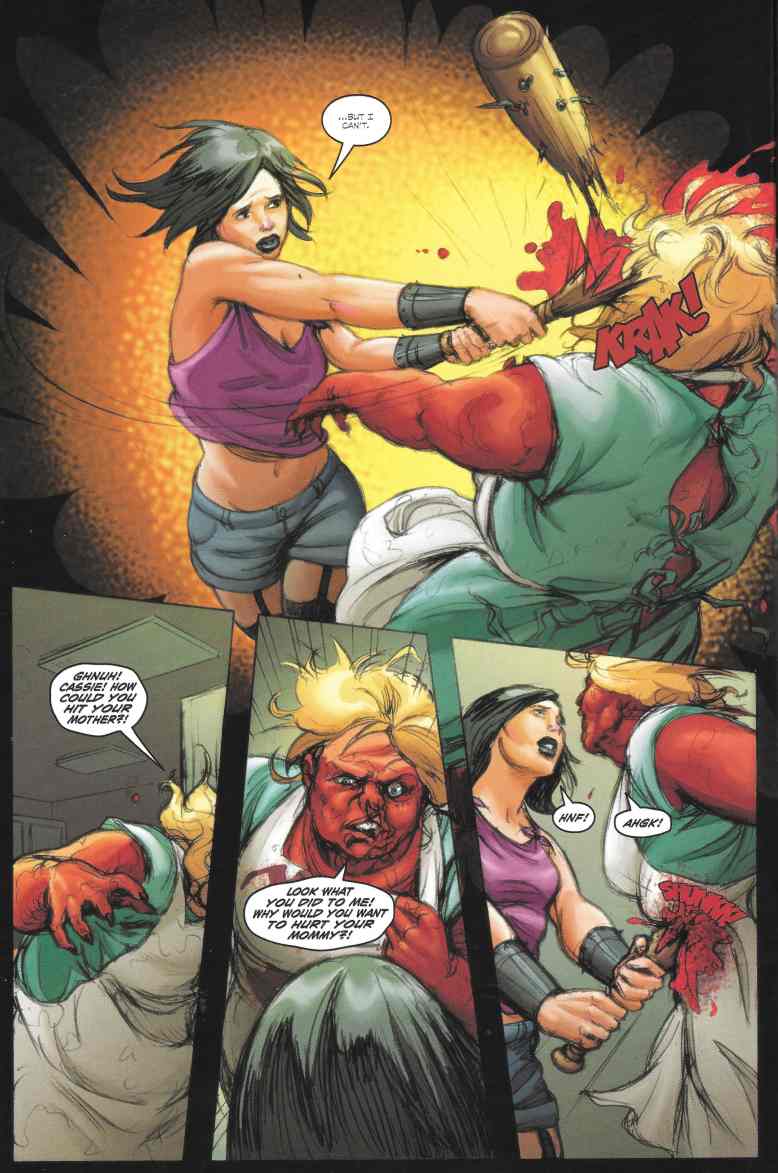 And Vlad makes a vow to Jack on his deathbed. 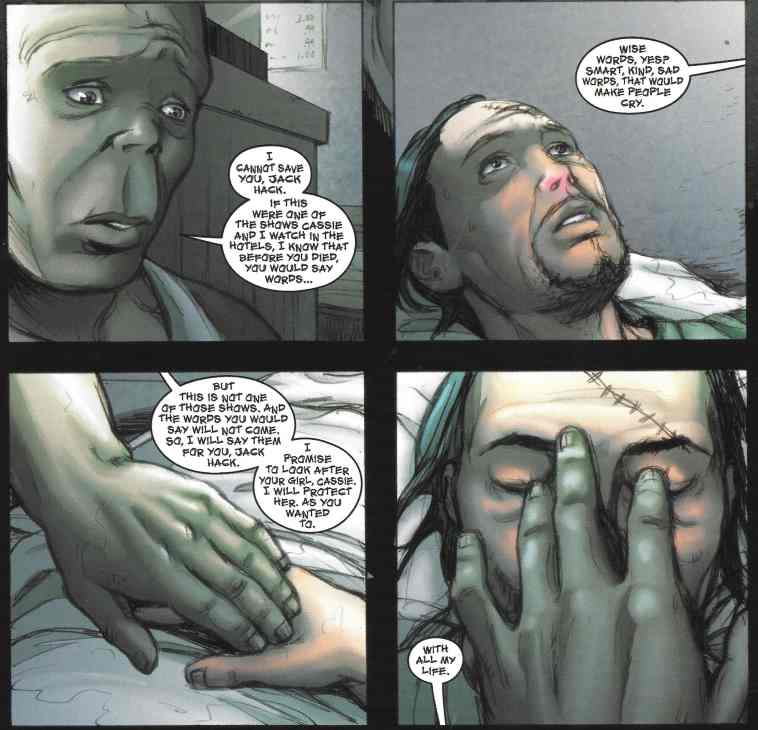 Are you as surprised by this as I am? Does it shock you as much as it does me that this book holds that much of an emotional kick in the nads as it does? Seeley is doing amazing work here with what could have devolved into a schlocky crossover. I am genuinely impressed.

And that’s not to say their isn’t still some room for humor in this. Beginning with West dosing Delilah while Cassie gets the girl out of there. 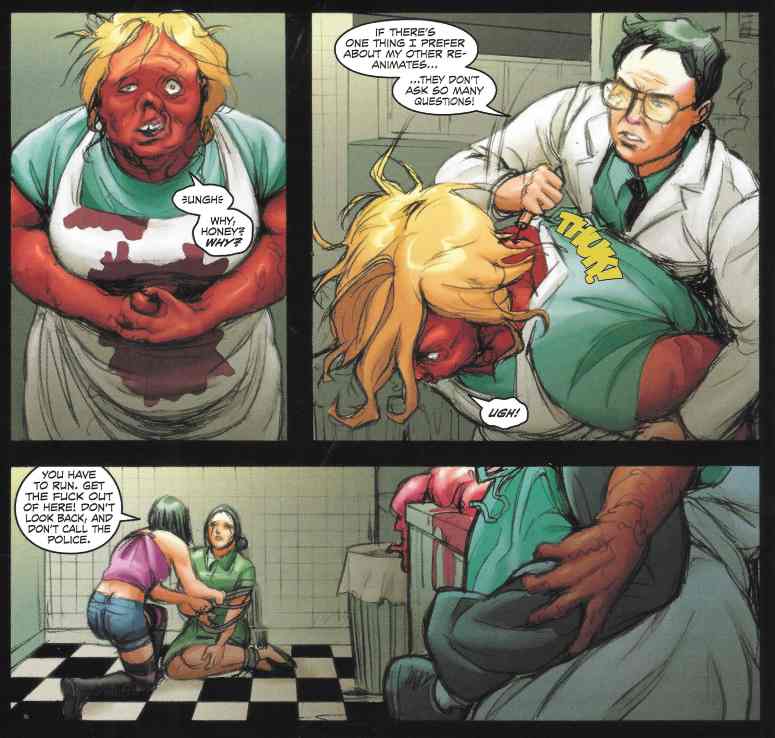 And then one final gut-wrenching emotional blow… 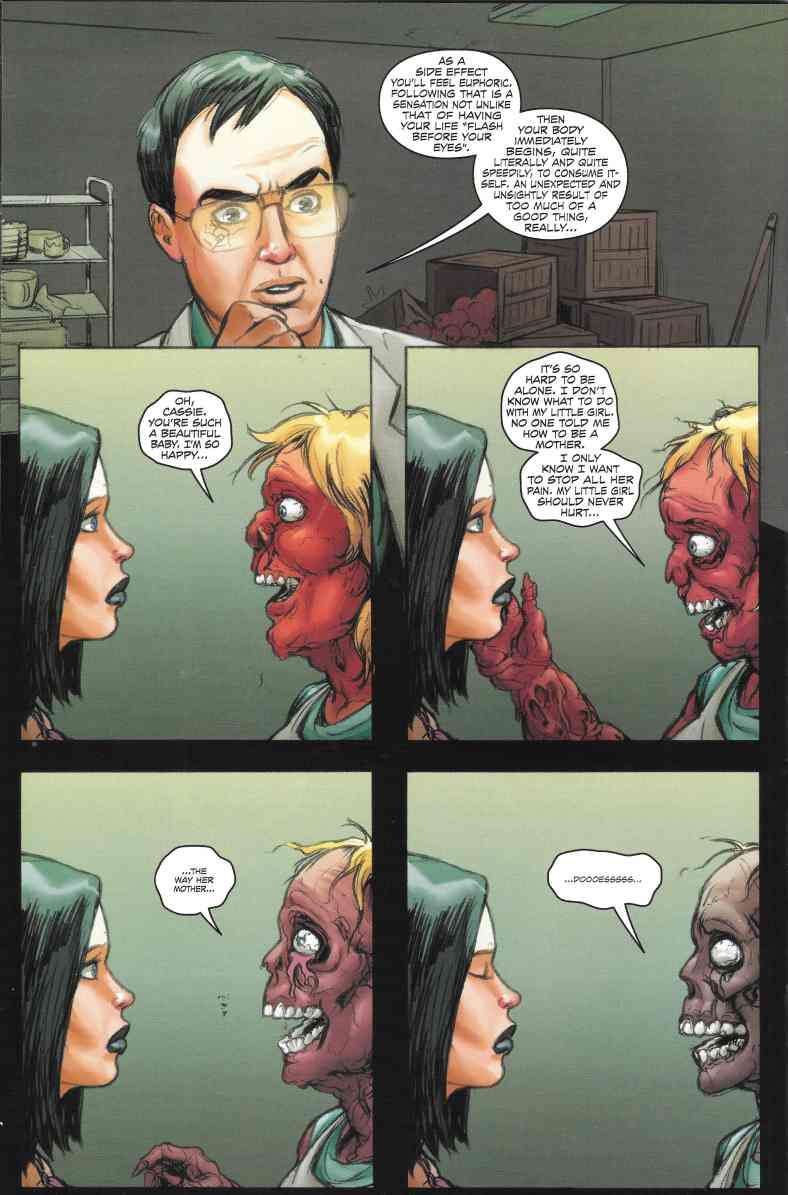 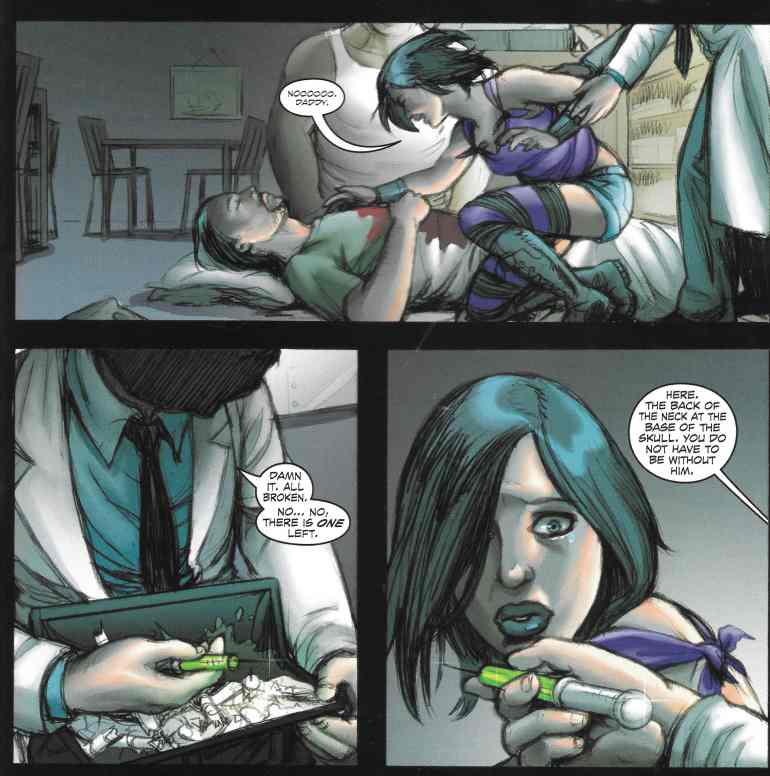 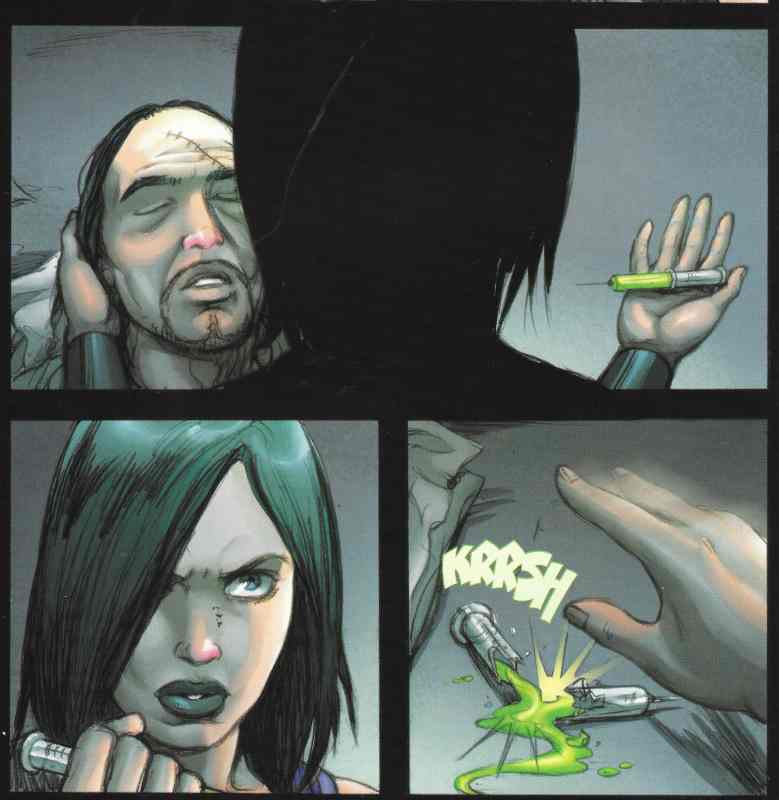 Tim Seeley does not fuck around, people. Put Hack/Slash on your short list. It is worth your time.

As for out crossover? West vanishes in the wail of an emergency siren and our duo go back to pick up the pieces of their shattered lives. 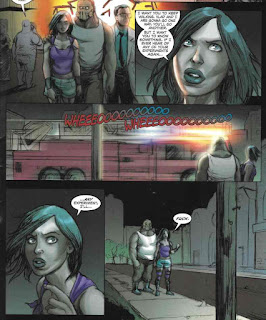 The book ends with a callback to our page of the demoness from the other dimension arriving to kill Cassie and West being scooped up by some nefarious government organization.

In all this is a BONUS the Crapbox provided me. Go get you some.
Posted by SonOfCthulhu at 3:07 AM