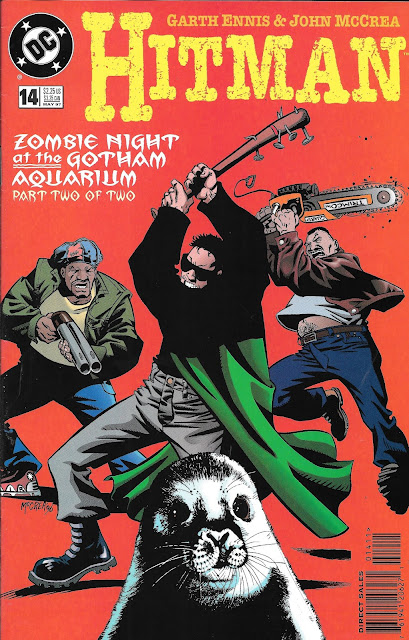 Buy this issue AND we’ll club this baby seal! (not “OR”)

With yesterday’s review being part one of this two-parter, we can jump right into the review today.

Where we left off was with Hitman Tommy Monaghan and his three companions trapped in a shed in the middle of the Gotham Aquarium. The shed is surrounded by dozens of zombified aquatic animals that have been murdered by Doctor Minett and brought back to life by his experimental gas. Minett was upset the military wouldn’t pick up the tab for anymore research and thus he’s using the aquarium’s now undead residents as effective examples of killing machines.

While the boys stack boxes against the doorway to block the flesh crazed animals from getting in, something becomes readily apparent… 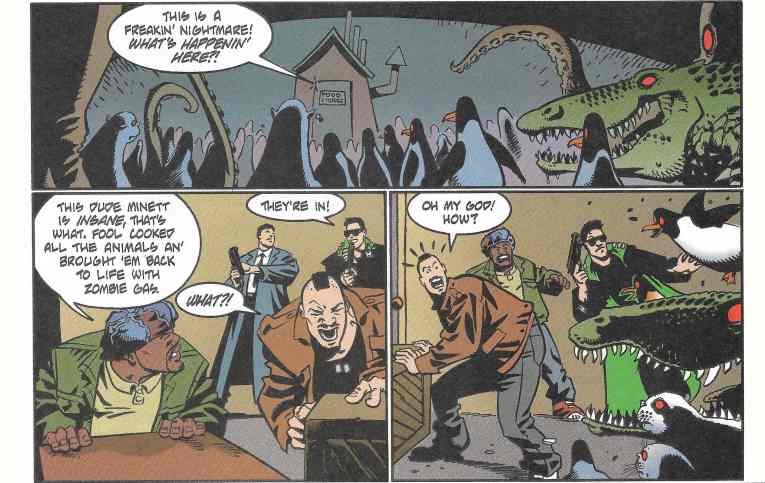 …that the animals can still get in via the “dramatic entrance” hole that lunkhead Hanken cut in the wall of the shed with a chainsaw last issue. Get ready for some ammo to be spent, folks. It’s gonna get a bit “blammy” this issue. 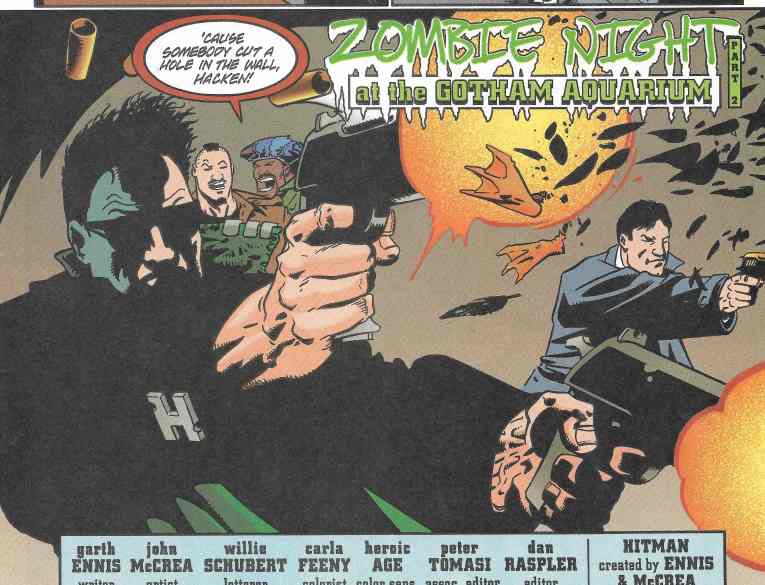 As unluck would have it, Hanken has kept ahold of that chainsaw and he goes to town on an undead gator, only to get bitten on the hand by an undead baby seal. This leads to a discussion on how best to separate the two of them… 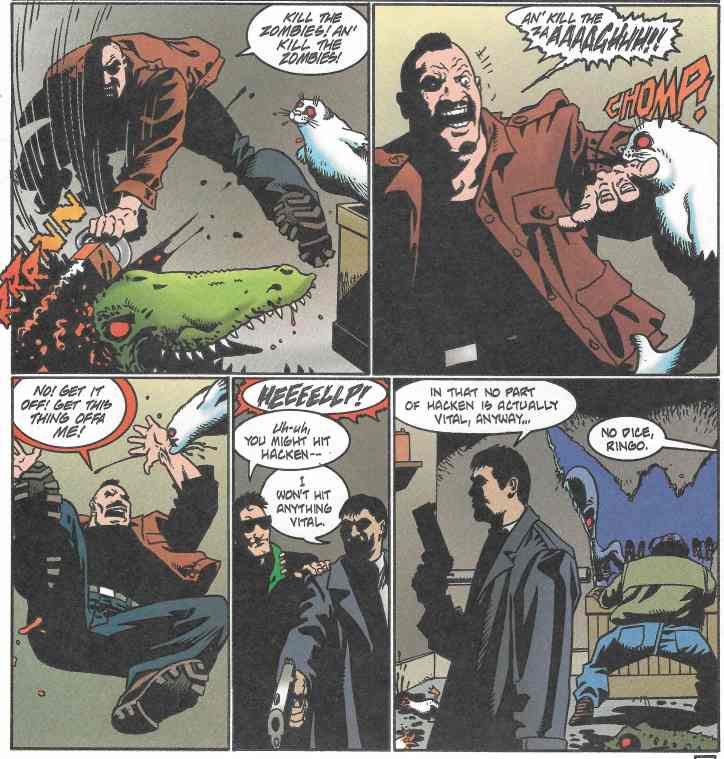 …which I love, because “it’s gotta be the bat!” Of course it does. Of course Ennis has found a way to make me root for our heroes to club a baby seal to pieces while laughing at the insanity of it all. This is the best part of Ennis’s humor, how he can have you reversing your mores because of the situational ethics of the moment while still giggling at it. 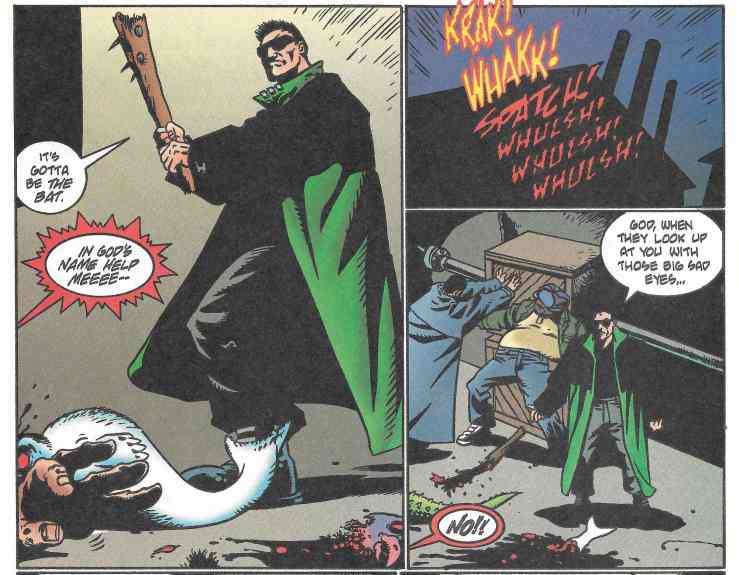 Of course this leaves us with an injured Hanken who immediately understands the danger he may be in from this zombie bite. 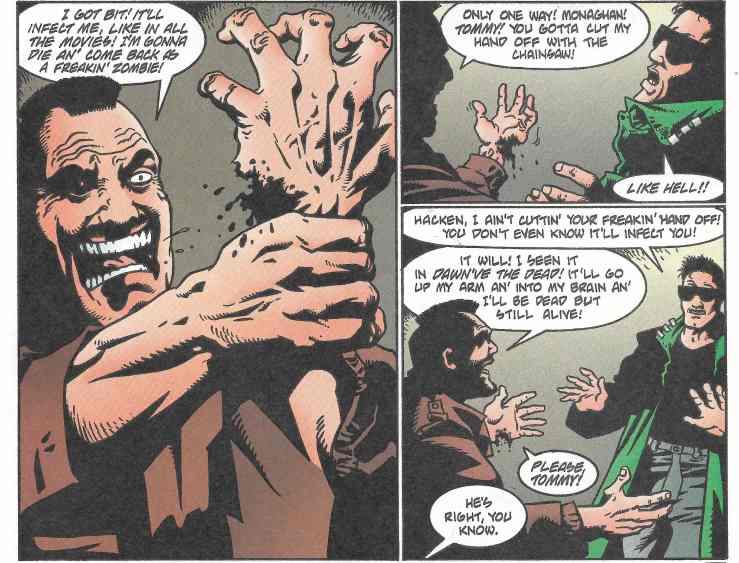 Ringo agrees with Hanken in this…but I gotta wonder if he truly agrees or if he is just humoring Hanken’s worse impulses. It’s here where I’d really like to get a tone or inflection of Ringo’s voice to know how that line is said. It could truly go either way. 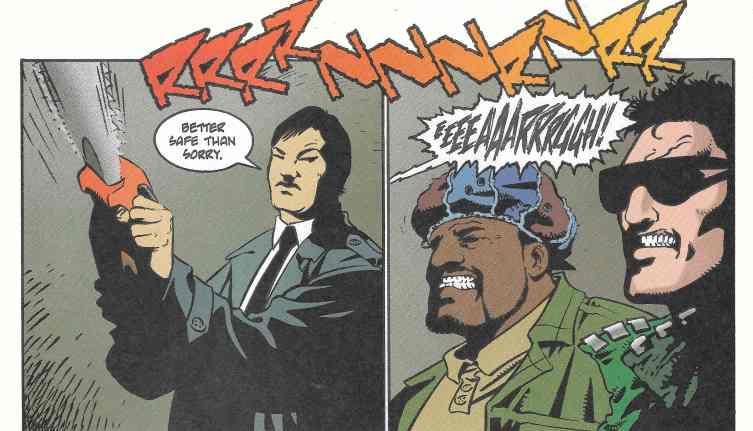 However Ringo intends it, he cuts off Hanken's hand and goes the full Campbell route on the seal carcass. There is a great bit between Natt the Hatt and Ringo here too. Everything about Hitman is so great. The humor, the art, the characters…it reminds be a bunch of where we started this zombie-fest: Shaun of the Dead. These two issues share a similar tone. A sense of being put in a dangerous situation yet still maintaining the human quality of irreverence about it. 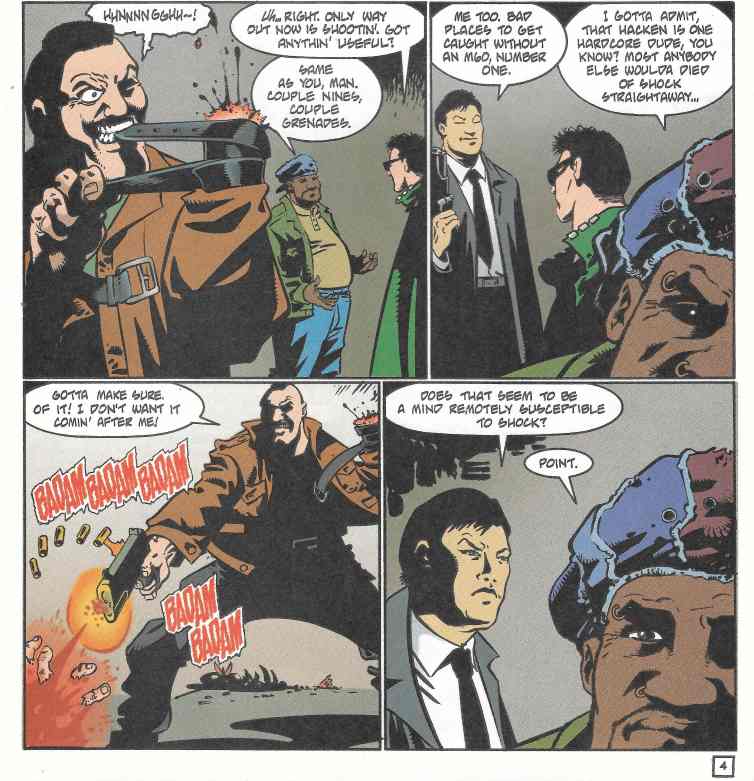 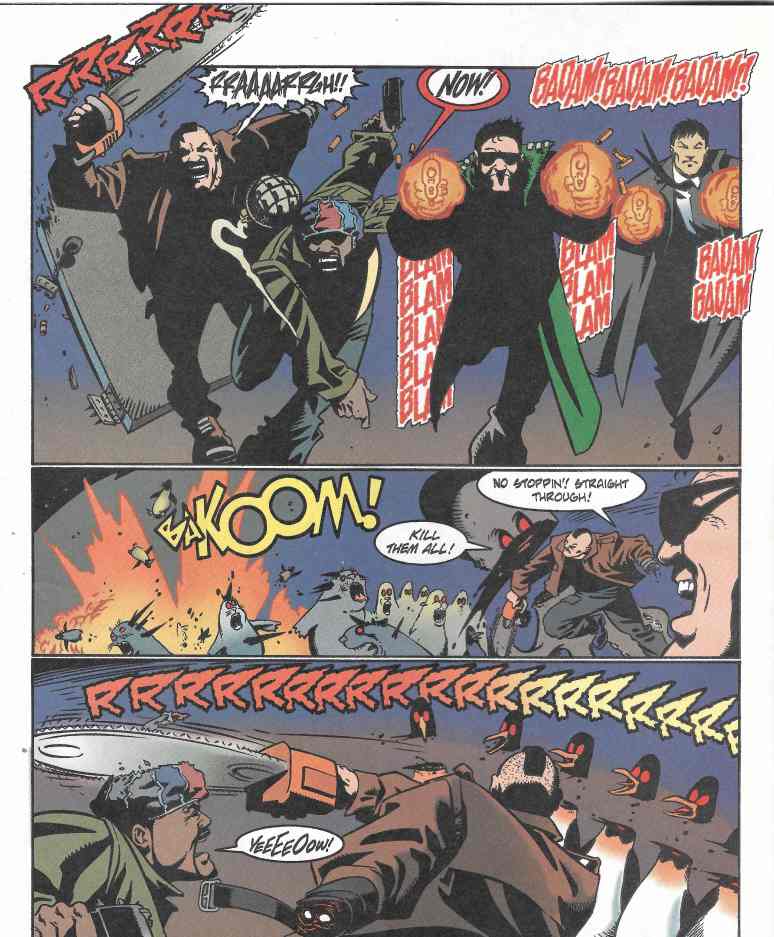 Chopping off Natt’s hat like that earns Hanken a very upset Natt yelling that he’ll make him eat that chainsaw if he doesn’t watch it.
Ringo falls and almost becomes alligator bait, but Tommy saves his hide, stating… 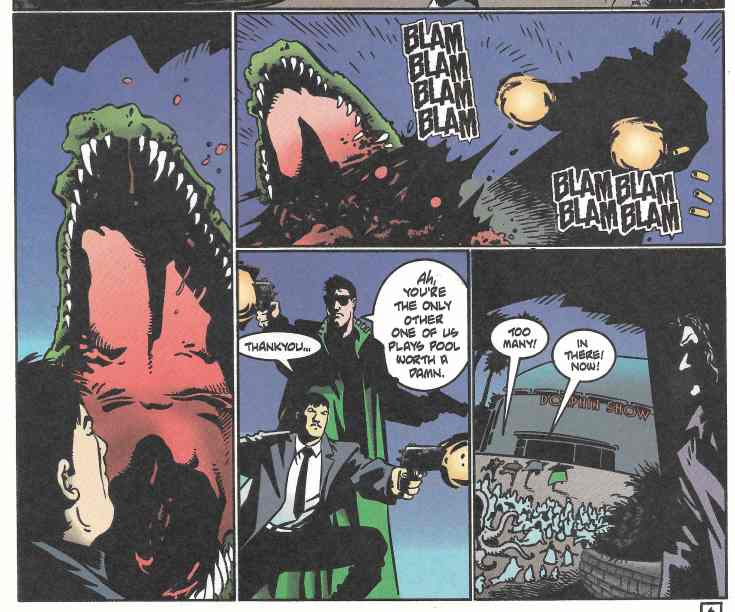 There’s just too many of the critters, and our group retreats to the Dolphin Show building. Relative safety awaits…
Plans get laid on how to make it out of this alive, when suddenly… 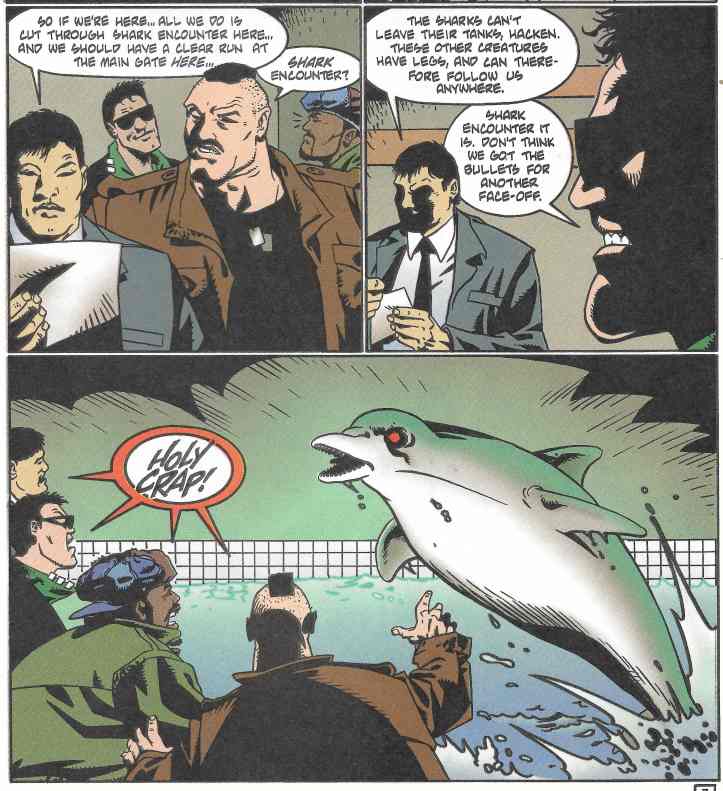 “They call him FLIPPER! Flipper! Faster than light-ning!” The boys dispatch without much fuss, but still a cool graphic. 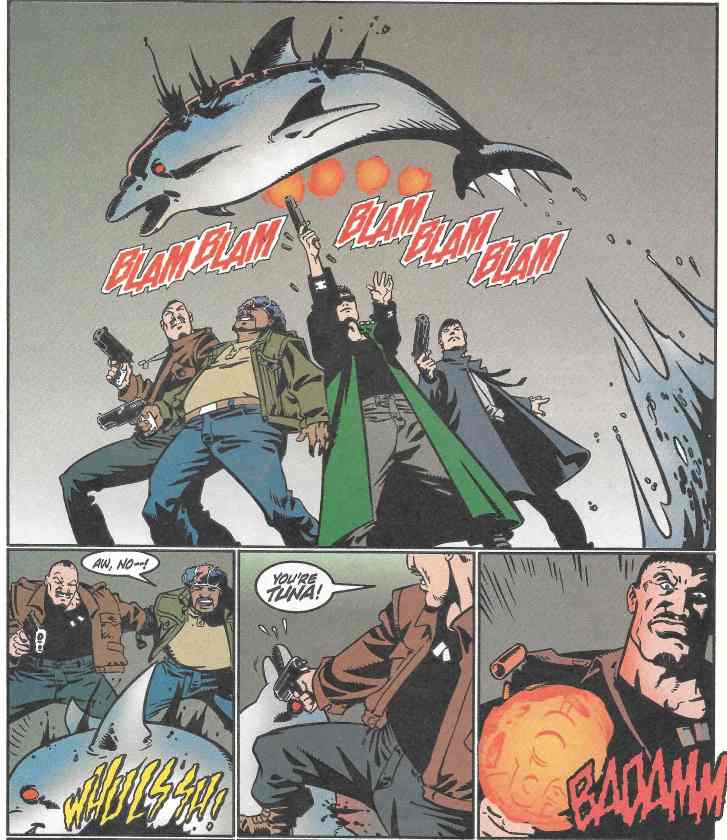 While our Dr. Minett finally makes an appearance. Seems the troop is making it through too easily and he wants some of his undead animals to survive the night so as to prove their worth to the military that shunned them. If Tommy’s group murders them all, no chance of additional grant money. Looks like he’s got a plan that involves a bucket of undead bait.

Off to the Shark Encounter everyone goes, including our lurking mad scientist. Tommy picks this moment to go all “Jaws theme on Natt, who doesn’t appreciate it. And while the boys are distracted looking for lurking undead sea life, the doctor springs his trap. 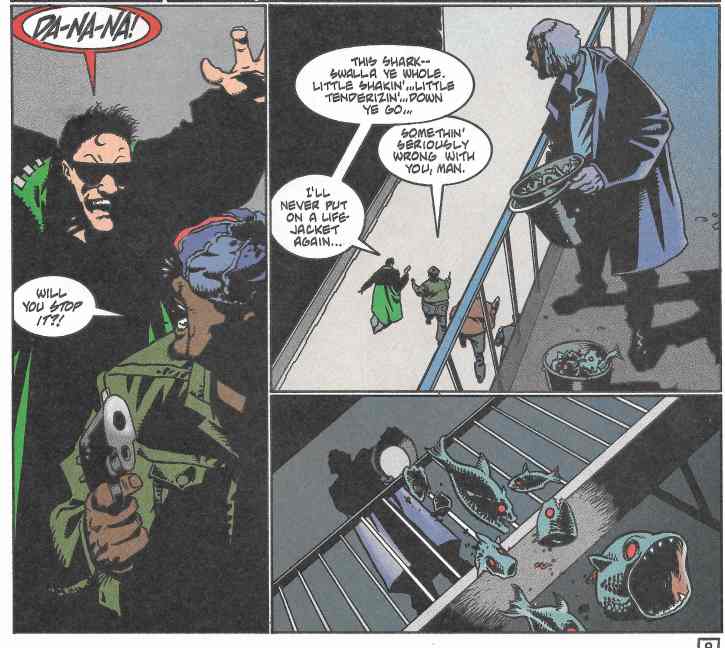 Everyone gets bit before the Doc fires a warning shot… 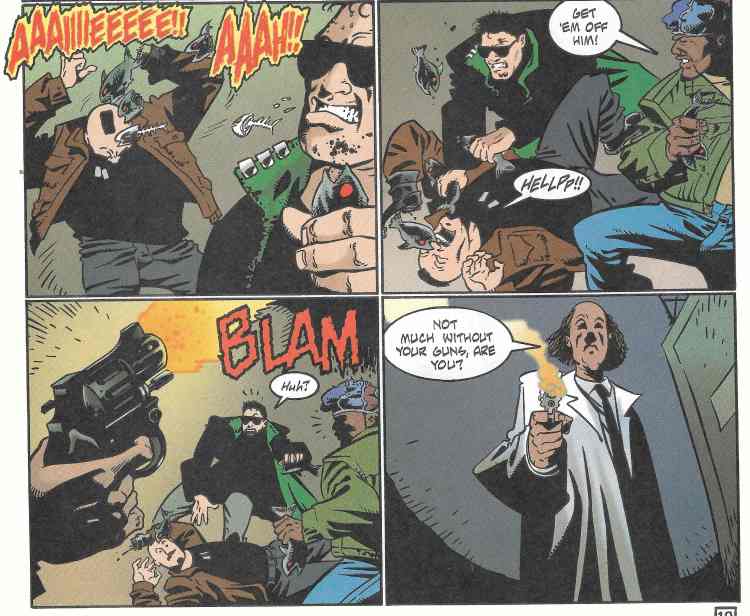 …but he doesn’t plan on shooting them. Having them devoured by the animals outside gives too much credence to his proposal that the military continue to fund his research.

Tommy does have one question before they go though… 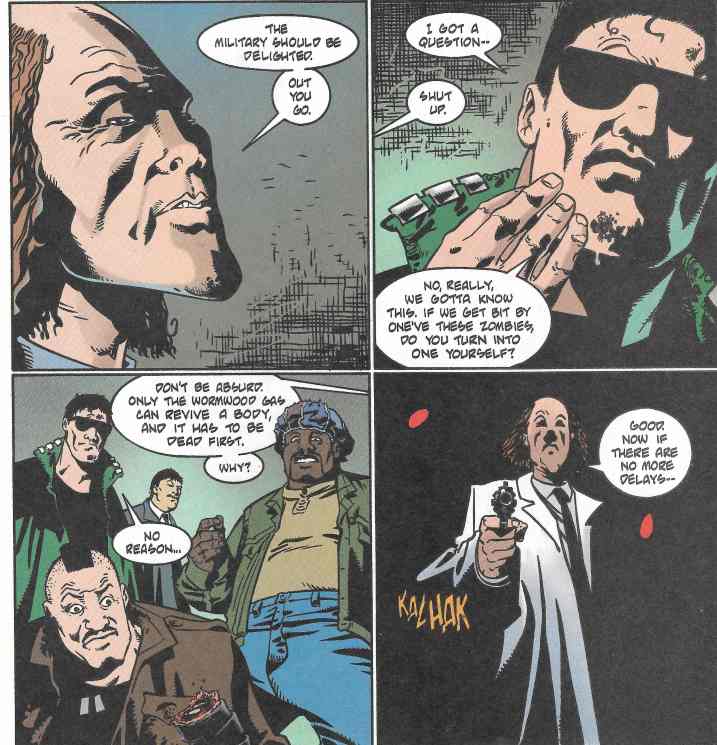 …and those red eyes behind the doc are… 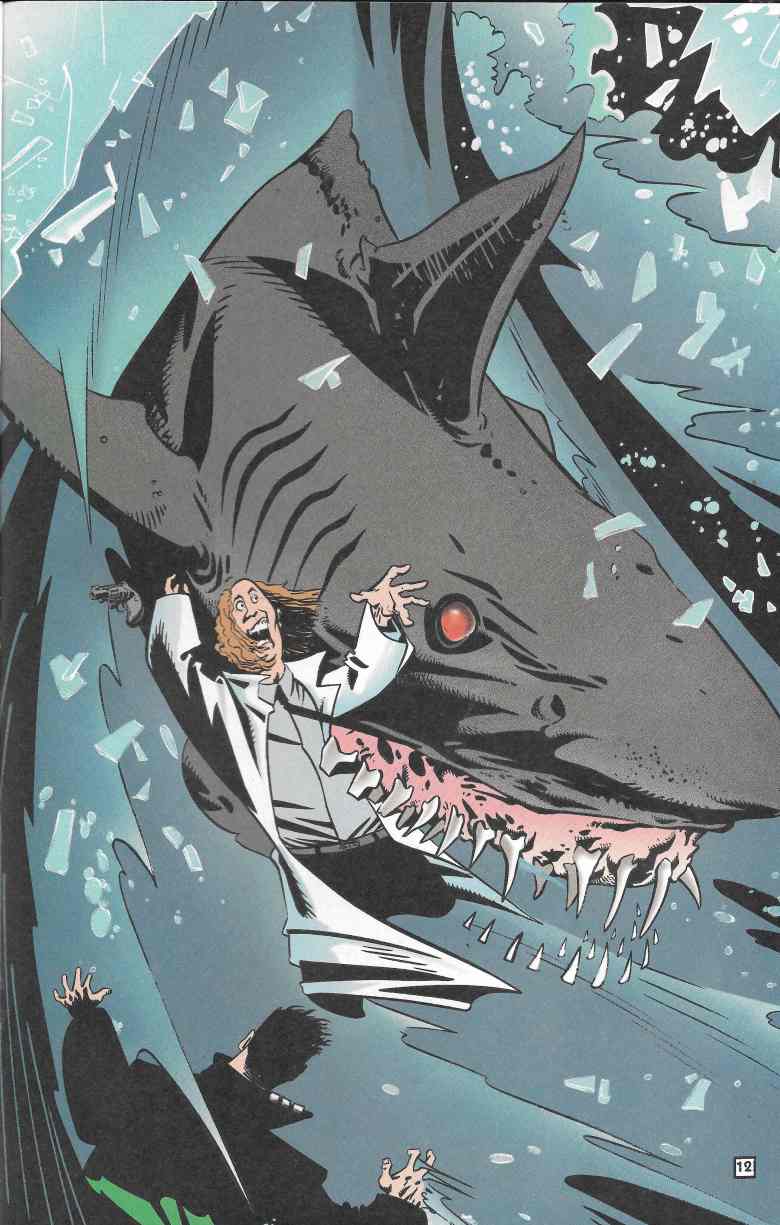 And sadly our heroes end up in the drink when the water contained in the shark tank is still deep enough for the creature to swim around in once spread all over the “Shark Encounter” building. Tommy’s about to become a snack but Ringo saves his butt this time. 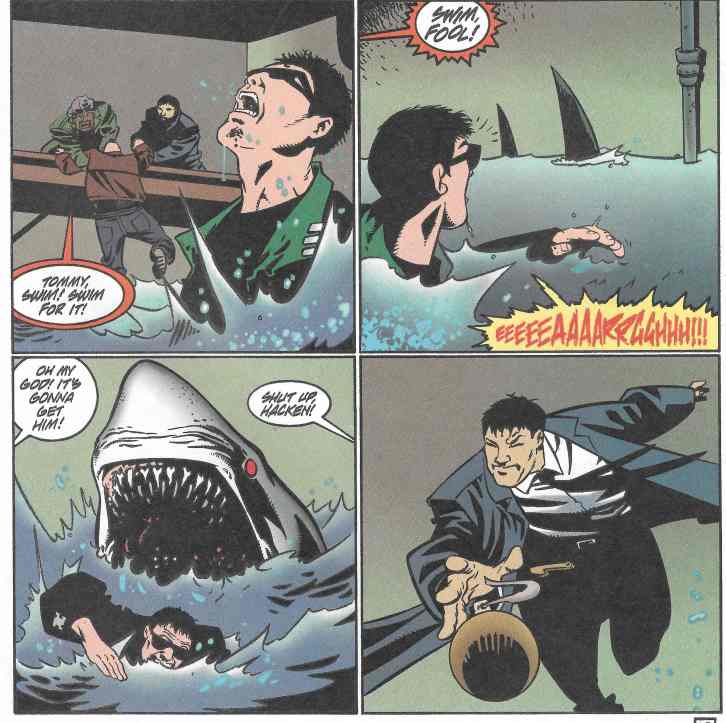 Unfortunately the grenade goes wide and the undead great white misses Tommy, but takes out part of the walkway the boys find themselves on. First one side… 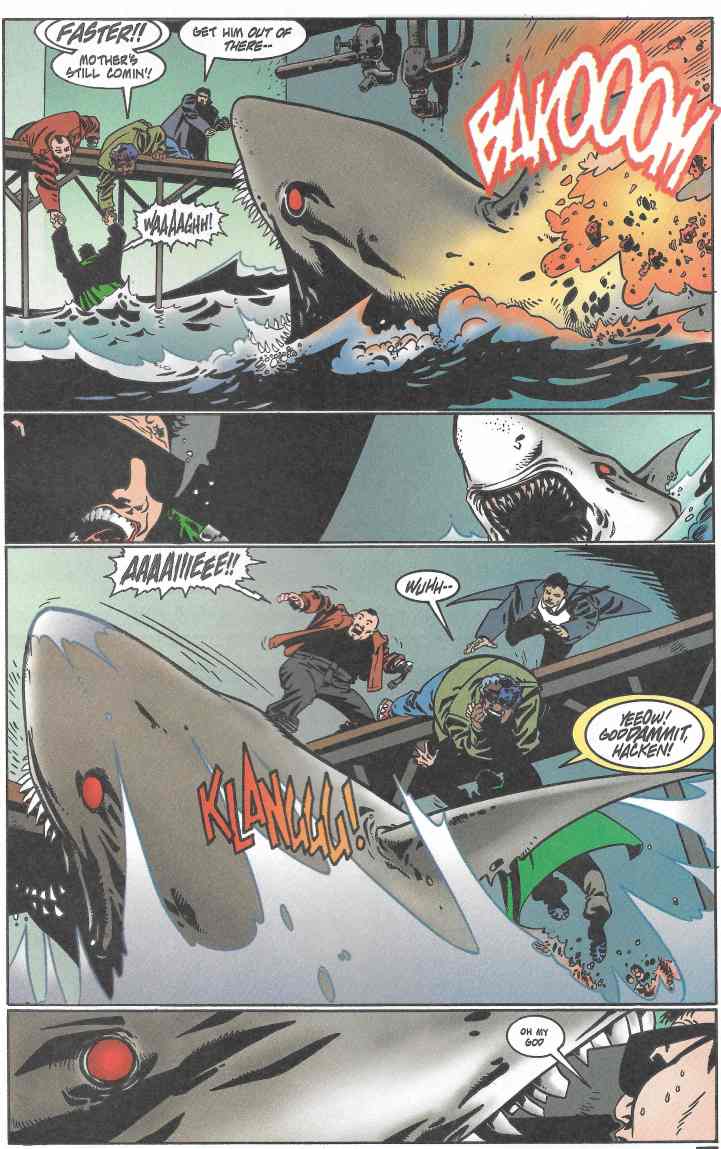 …and then the other, stranding them in the middle like fish in a barrel. 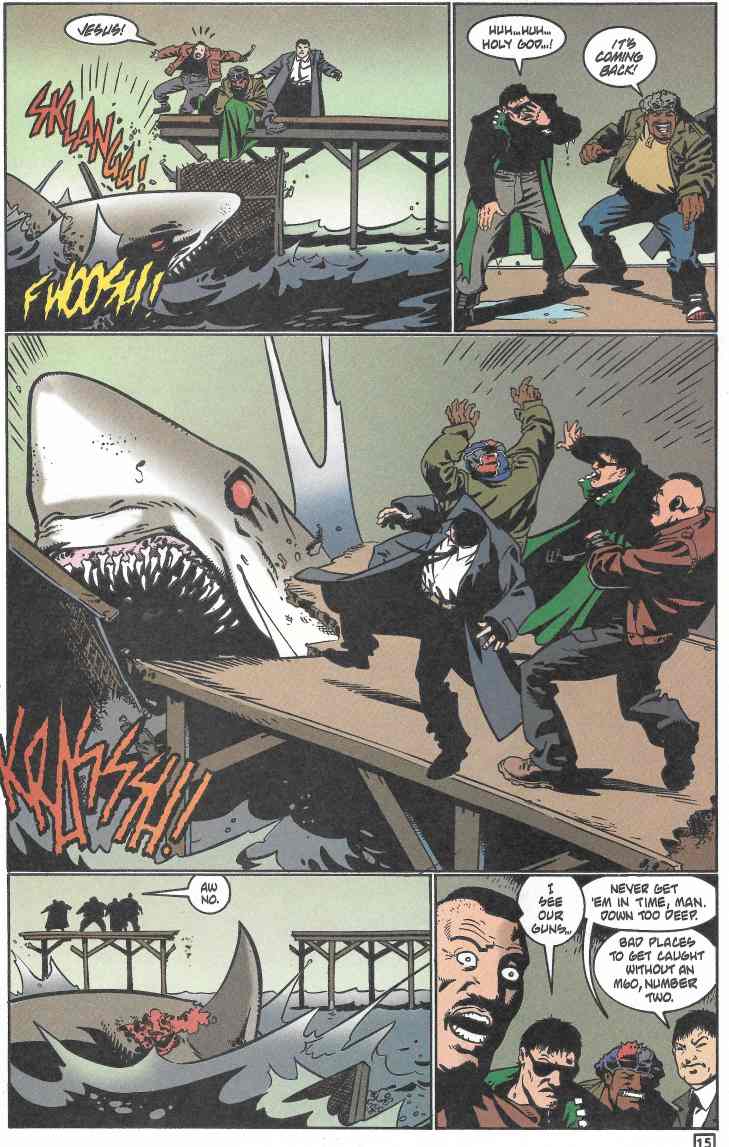 Tommy has a idea for getting them out. All it takes is one well paced shot… 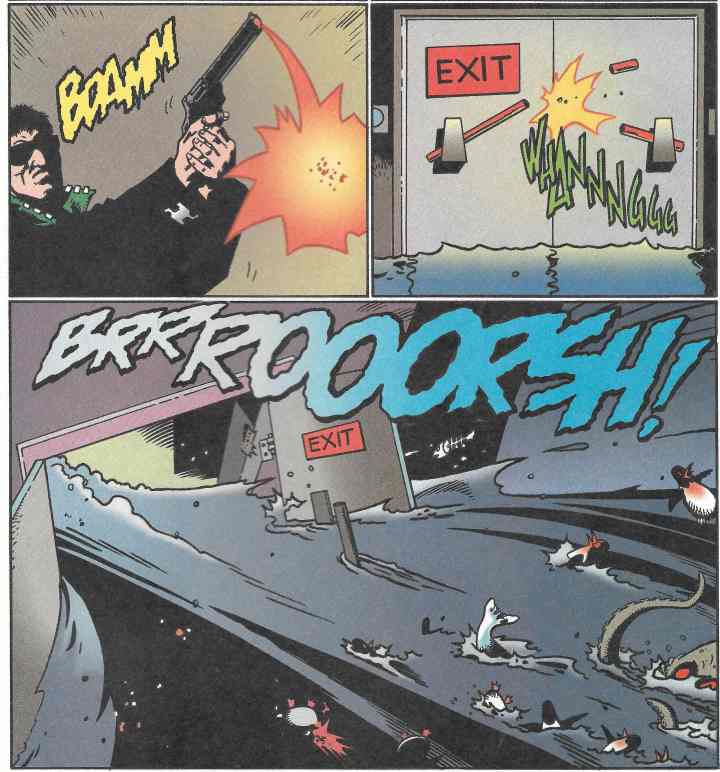 …and out goes the shark…AND in comes the rest of the undead marine animals. 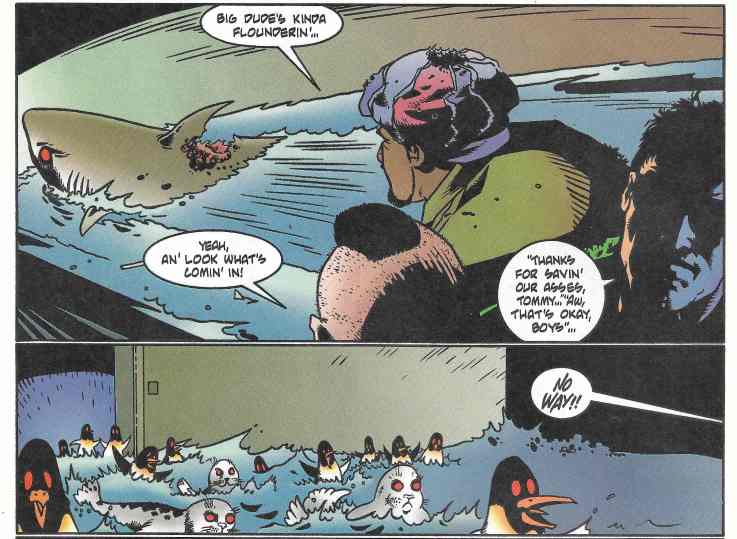 The guys even have to scramble for their guns. Love this four-panel shot of each one grabbing a gun… 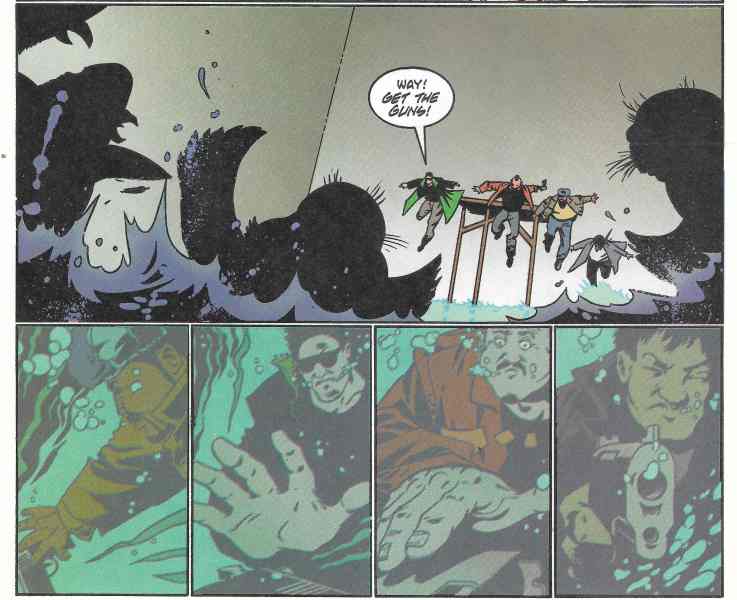 Which leads to a bunch of cute aquatic sea life losing their faces and lots of shell casing littering the floor. Suddenly Tommy feels a clammy hand on his shoulder… 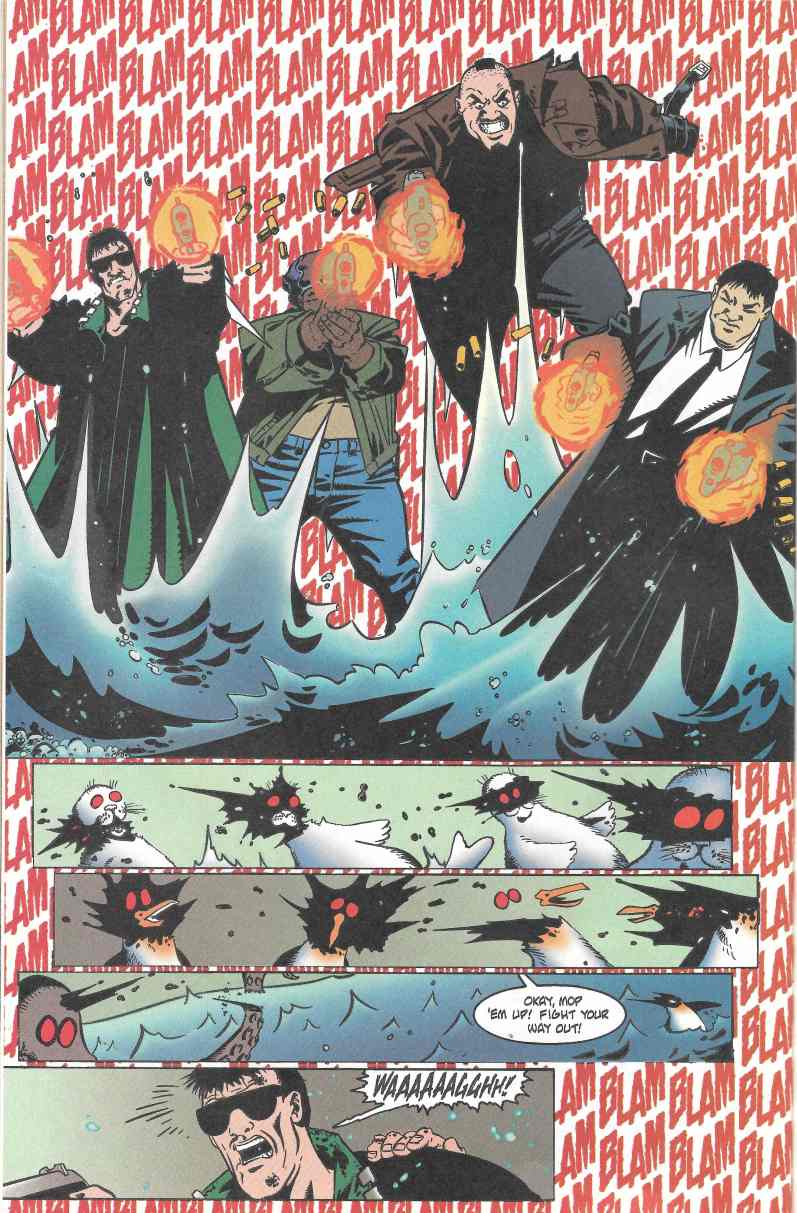 And we find that Doctor Minett has become a victim of both his own even undead shark but also there were enough lingering traces of the gas to where he has been brought back to life. In a MOST DISGUSTING MANNER! 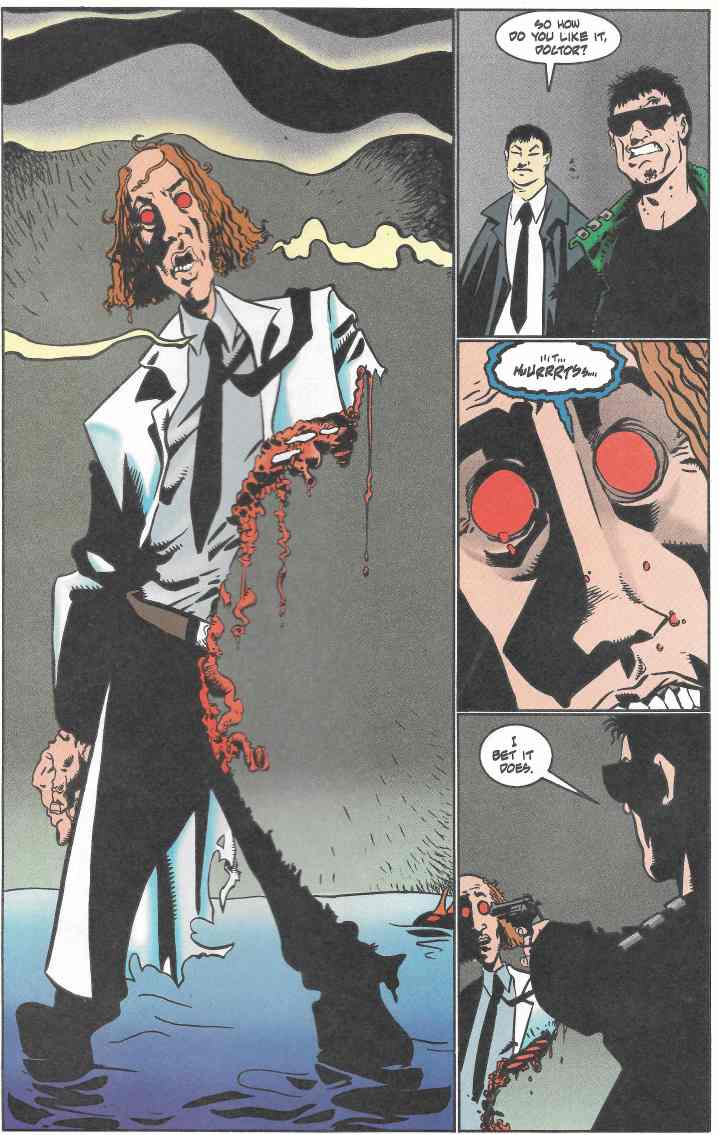 Tommy puts him out of his misery. For good.

At this point most of the animals are down for the count and the group hears sirens. They decide to do a little mopping up, specifically Mr. Jaws is still moving around a bit. Next they find their way out of the place when they bump into this squad of cops on their way in. 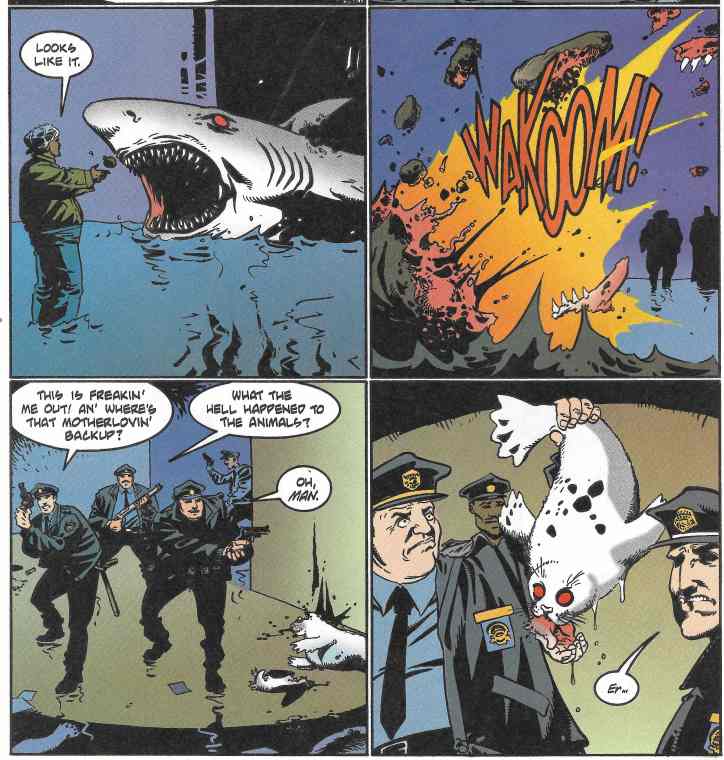 The local constabulary knows Tommy pretty well, but there would of course be plenty of questions at the station house that the guys would much rather skip, so Tommy tosses a smoke grenade. The boys vanish in the confusion. 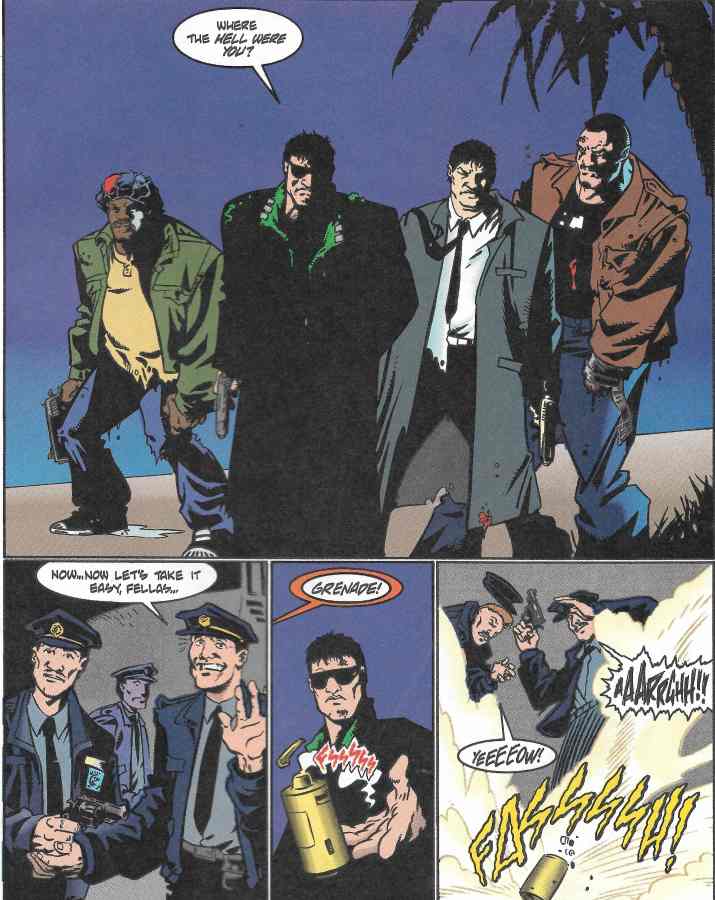 Next morning, Natt and Tommy are sitting in Noonan’s with a pile of cash each, reflecting on what just happened. The cops got bought off and the whole mess was reported as a fire that killed all the animals. Natt and Tommy both think Injun Peak should have done that from the start. As to what they are going to do with the fifteen grand each? 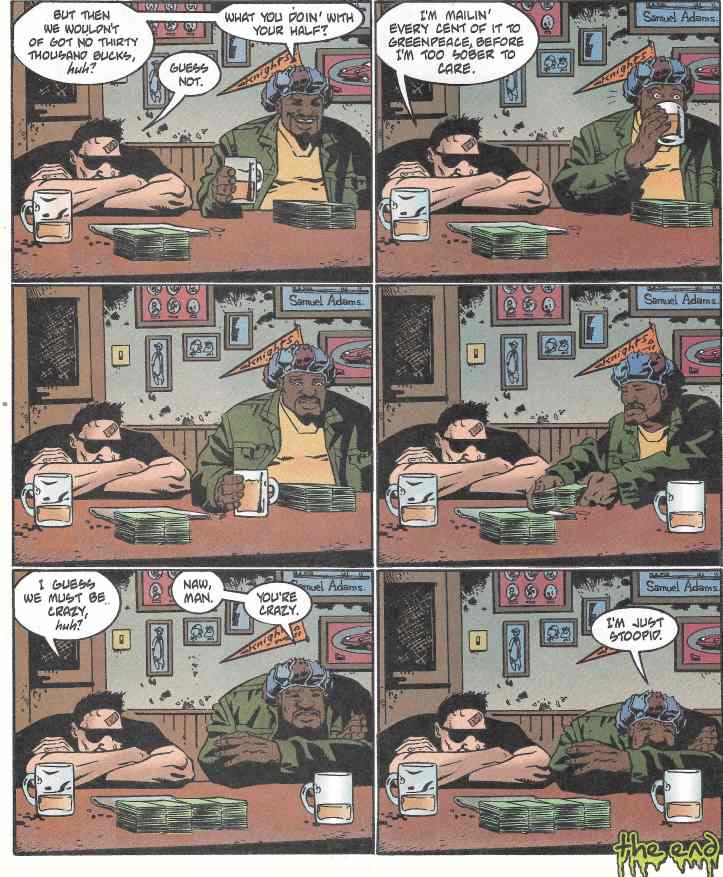 If you enjoyed this, I seriously suggest you check out the Hitman trades. There are five volumes and Ennis and McCrea do all the stories, so you can expect the same quality storytelling. That’s it for our two-parter. Hope you enjoyed it and I’ll see you tomorrow!
Posted by SonOfCthulhu at 5:36 AM